A new year, a new decade, a new bike, a new me! Hopefully.

Why did I get another bike? Well, I could justify the purchase merely with reference to the rules:

But I have been thinking about an all-terrain-vehicle for a couple of years. In fact it's almost three years ago I fell in love with the Fuji Gran Fondo 1.3. It had several features on my wishlist - tubeless tyres, clearance for 32mm tyres, disc brakes and vibration-damping technology. It's not a gravel bike, more an endurance bike. The bad news was that it cost £4k, which I couldn't justify. I looked for ages for a secondhand one but they never came up. So I forgot the idea.

Then, a couple of weeks ago, I was searching to see if there were any cheap gravel bikes available (less than £1000), when I saw this secondhand GT Grade Carbon Ultegra 2016 on ebay for £889, with a special offer 5% discount that day.

I'd never heard of the Grade, but soon discovered it had been at the spearhead of today's gravel bike 'craze', and was awarded Best Debut Bike of the Year 2015. It looked like a nice bike. I researched the hell out of it, kept looking at the advert and called the seller, but it was being sold on behalf of the owner, who could no longer ride it, through ill-health.  Originally a £2.7k bike, it was well-specced and seemed to be a bargain. So I took a chance and bought it, sight-unseen for £840.

I picked it up the following day, less than an hour's drive away. It looks like an 'honest' bike. Judging by the original bar-tape and general condition it's not done that many miles. It has hardly any scuffs but needs a clean. 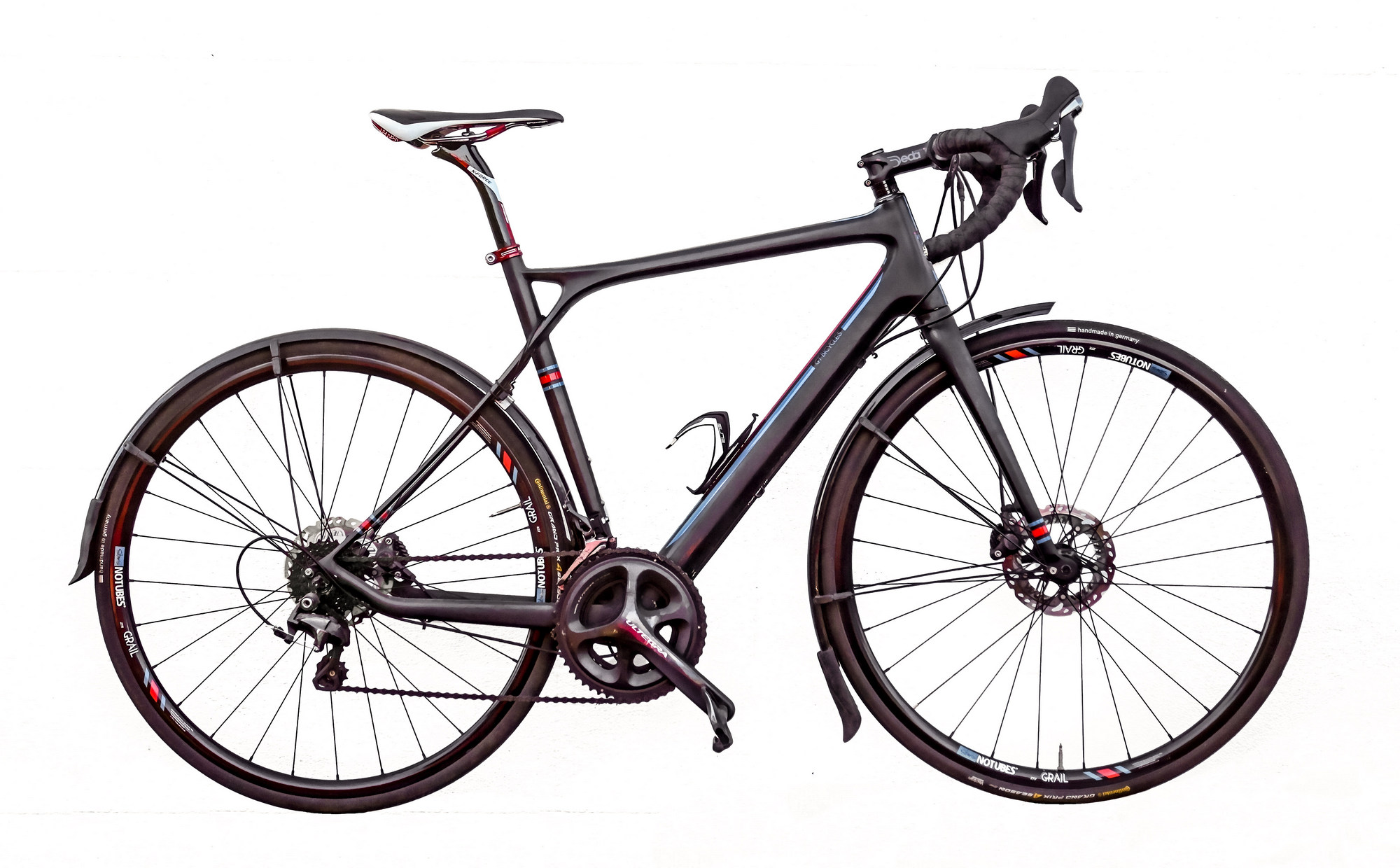 *Items in red are different on my bike

My specs (some components are not original)
Reviews and tests

Do I need a gravel bike? This question is much easier to answer.

Never one to shy away from riding on less-than-perfect surfaces, I can easily recall dozens, if not hundreds, of rides featuring something other than smooth tarmac. Woods, fields, deep mud, cliff-top paths, bridle paths, forest tracks, so-called UK bike paths, canal paths, footpaths, cinder paths, gravel paths, etc have all featured at various times. And all on a 'normal' road bike. Other than unrideable gradients, the only 'flat' surface that stopped me riding was large pebbles near Deal. That was just impossible, although maybe fatter tyres would have overcome even that.

Tyres I've had 28mm Conti Grand Prix tyres on my Giant for the past 5 years, but unfortunately there's not enough clearance for them on the Colnago. Although, last year, I shod the Colnago with 28mm Conti Gatorskins, which inflate to be no larger than the 25mm Grand Prix! After discovering the smooth ride that 28mm tyres offered, especially on UK roads, I naturally wanted to try even fatter tyres. And for that I would need another bike!

Brakes Gravel bikes have disc brakes. One advantage is that they won't get completely clogged-up with mud, which I have had before. I also won't have to worry about my wheels melting on long descents! I had several long descents last year where I was on the brakes nearly the whole time. A negative for disc brakes is that they can squeal, which is very annoying.

Frame The frame has a more relaxed geometry with a longer wheelbase which leads to more stability and less 'twitchiness'. The disadvantage is that it will be less responsive. The Grade frame features very thin seat stays composed of a solid fibreglass core.  This, and the small triangle design at the top of the seat stays allow the frame to flex more. (In fact, on the 2020 version of the frame, the thin seat stays are completely decoupled from the seat tube, offering even more flexibility.) The frame is 55 cm, just right for me, according to Evans website - we'll see...

Bars The drops on the handlebars are splayed out at quite a noticable angle, offering more stable steering. 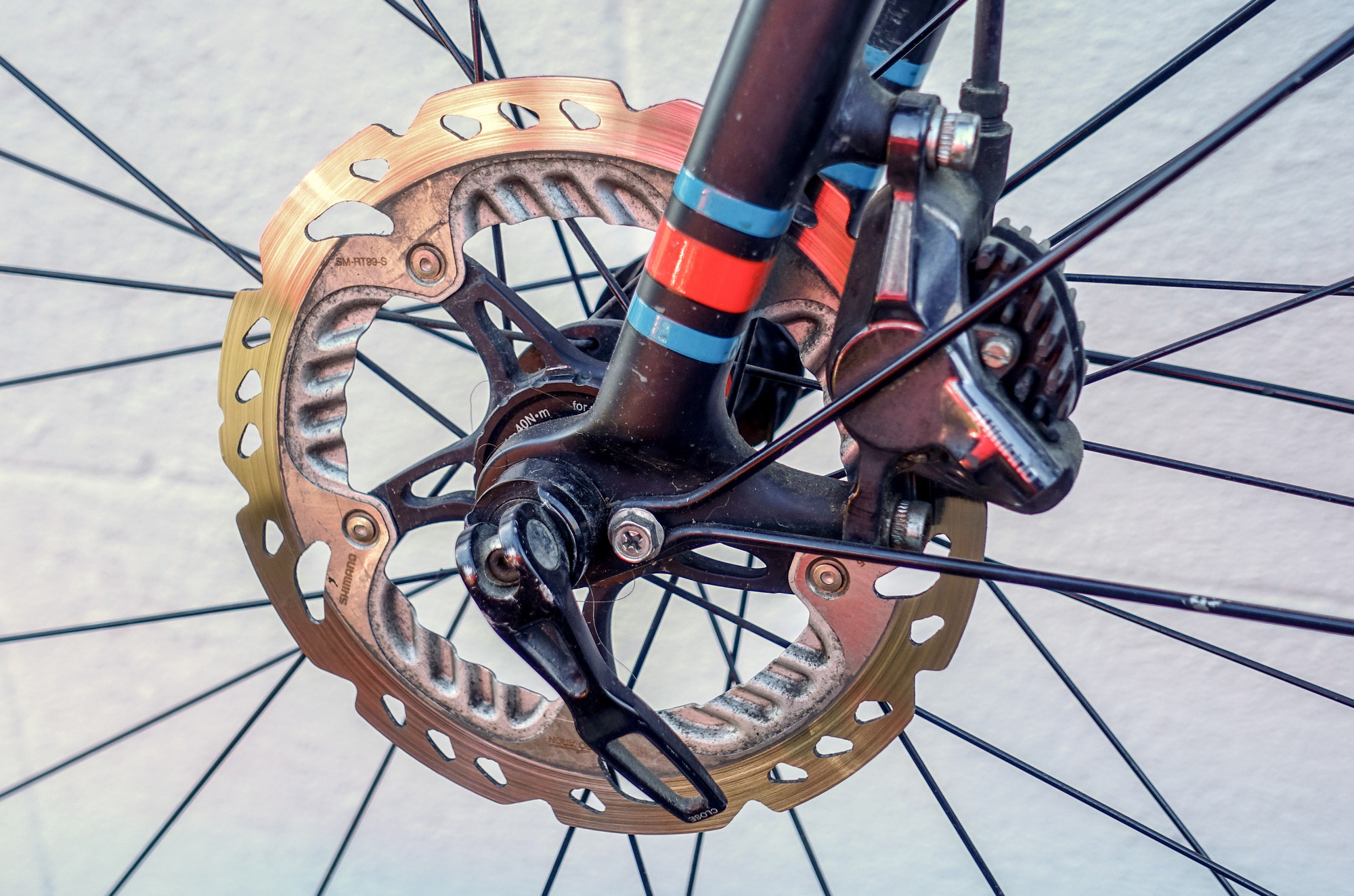 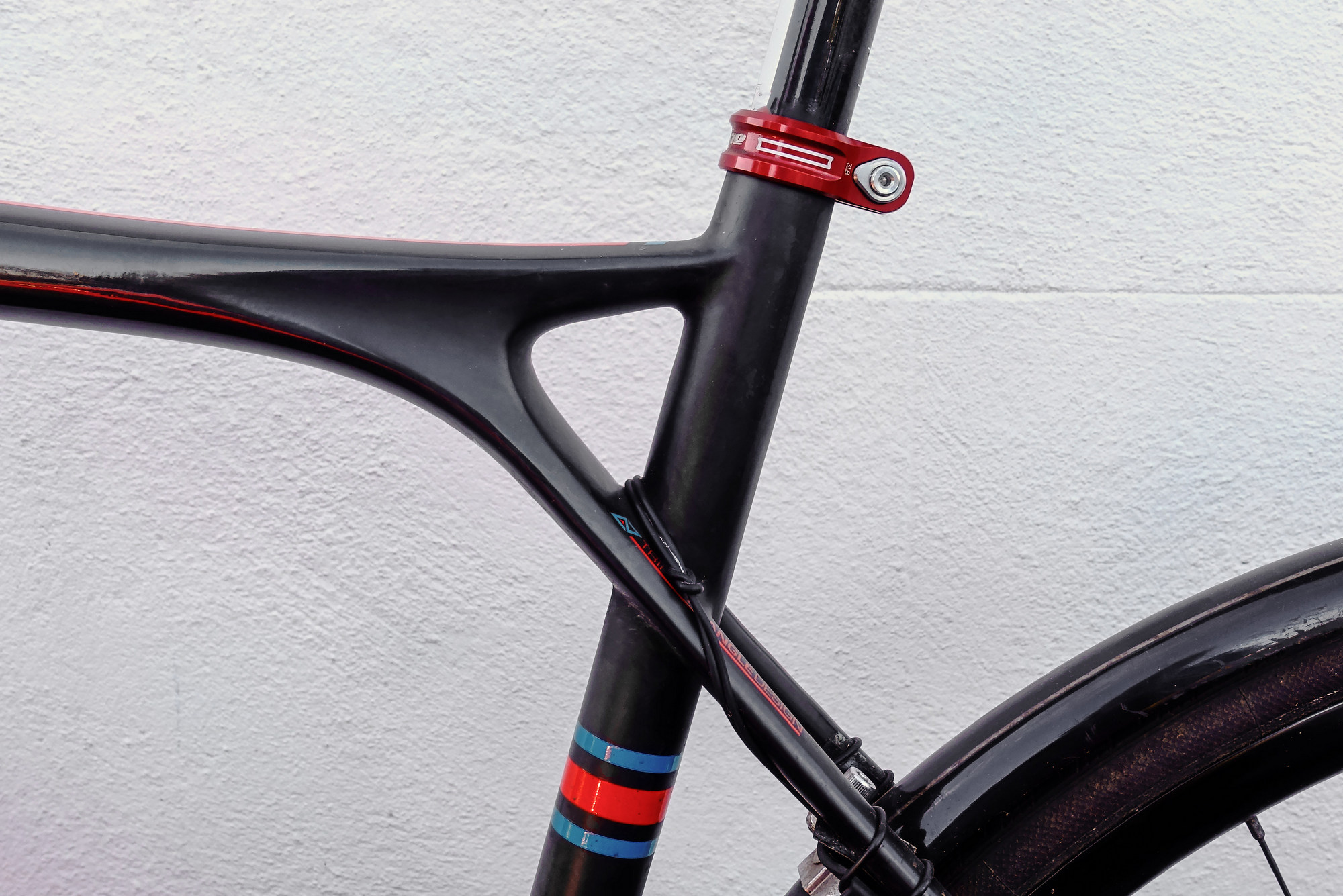 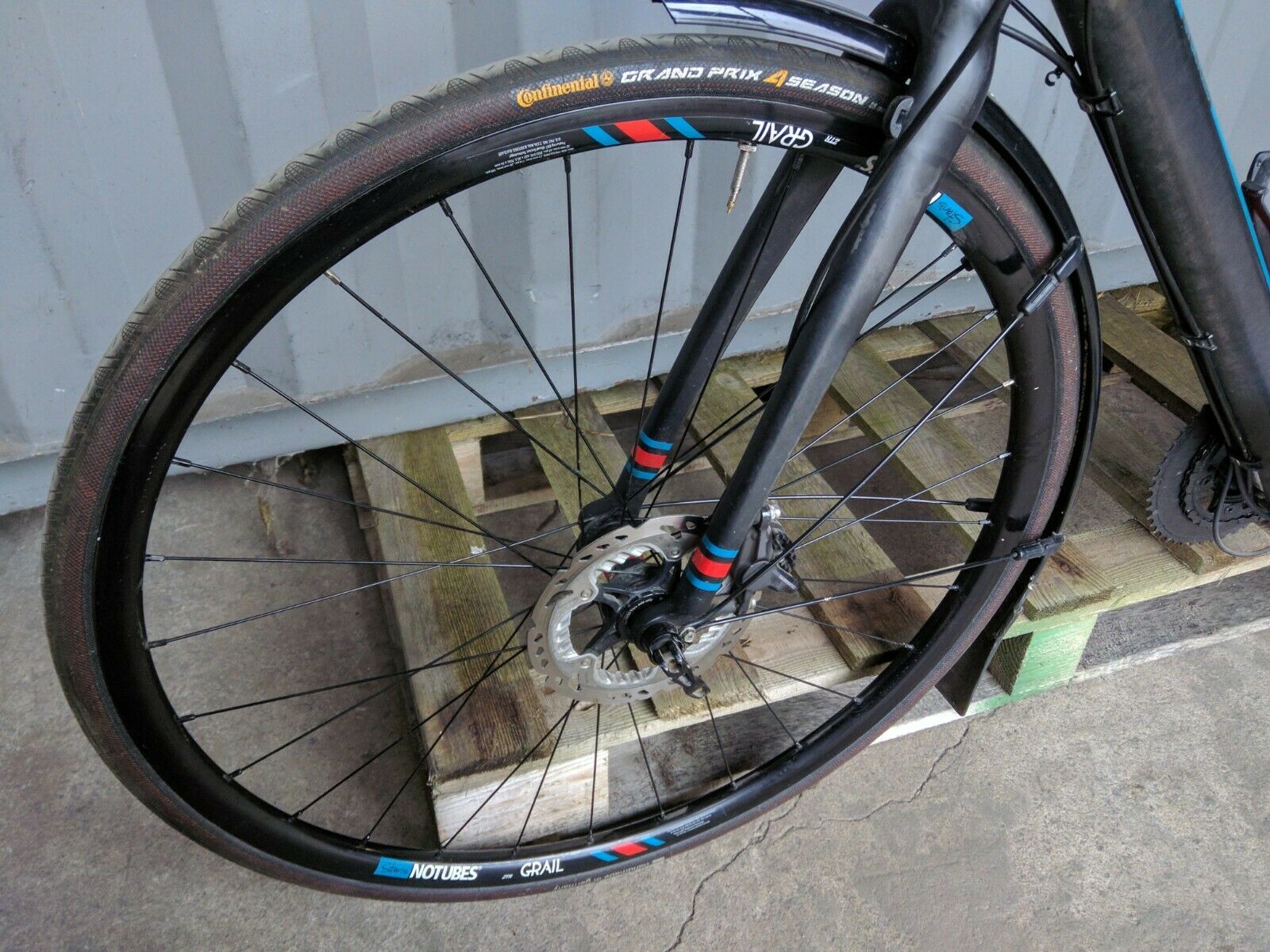 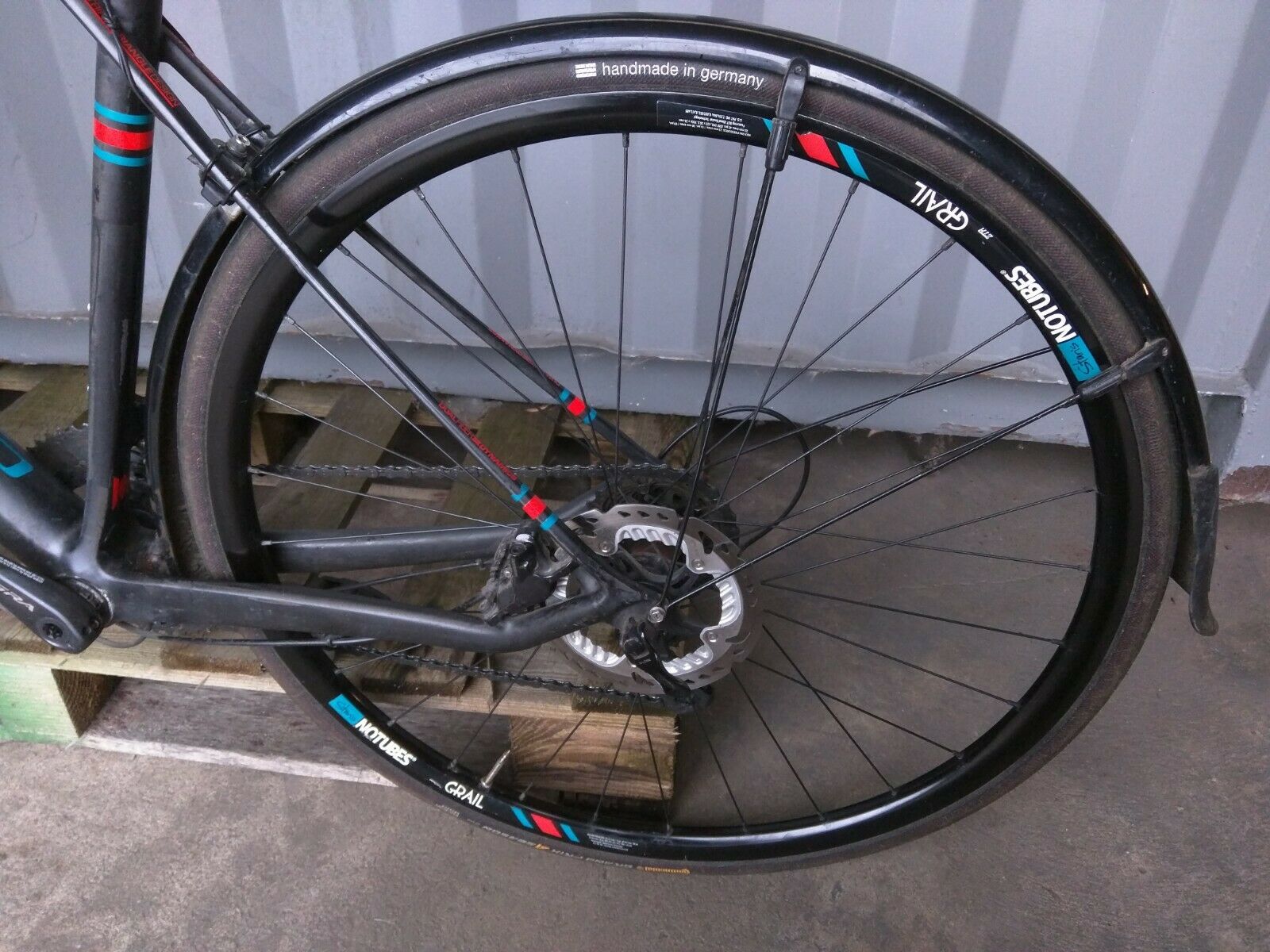 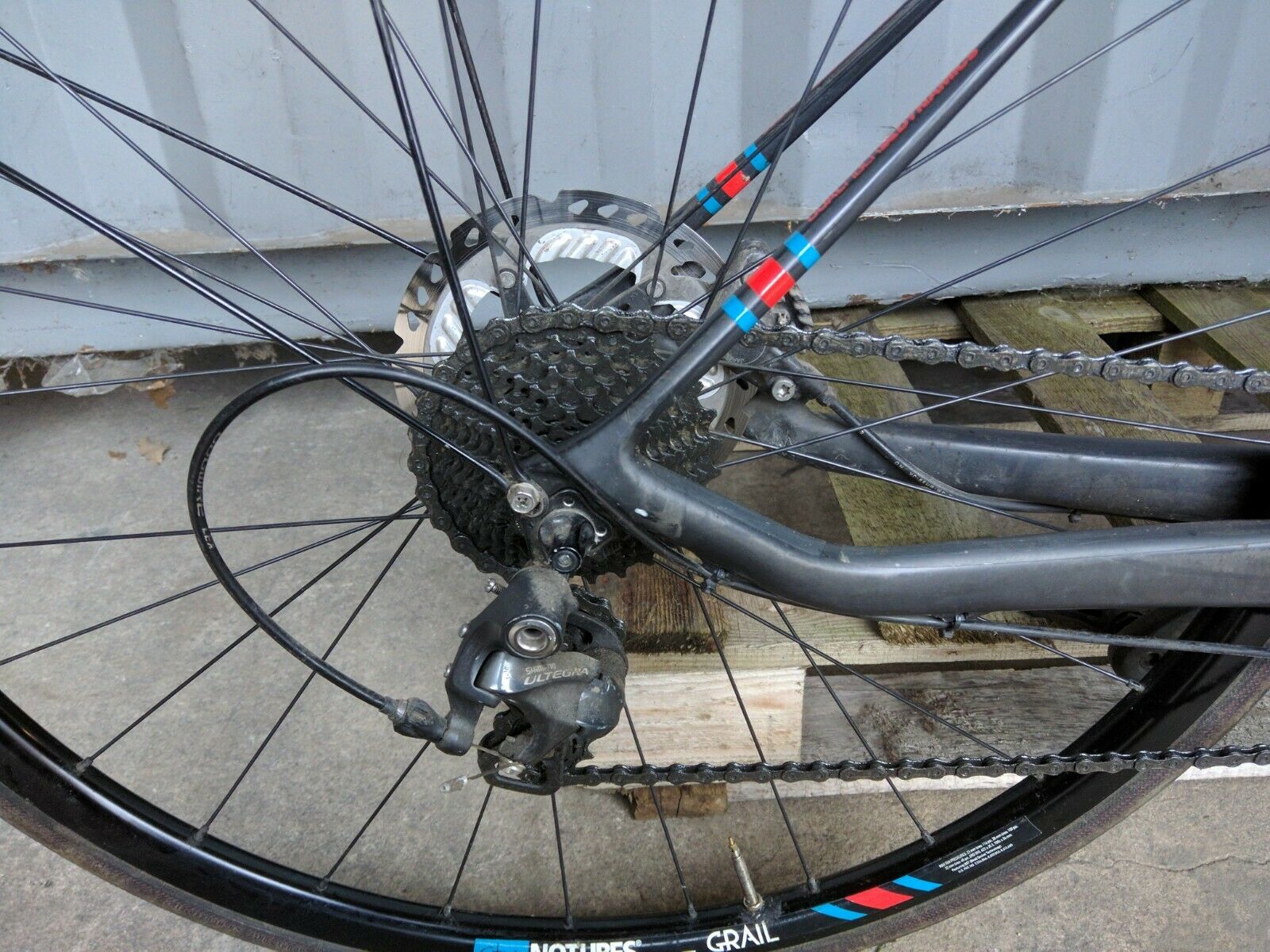 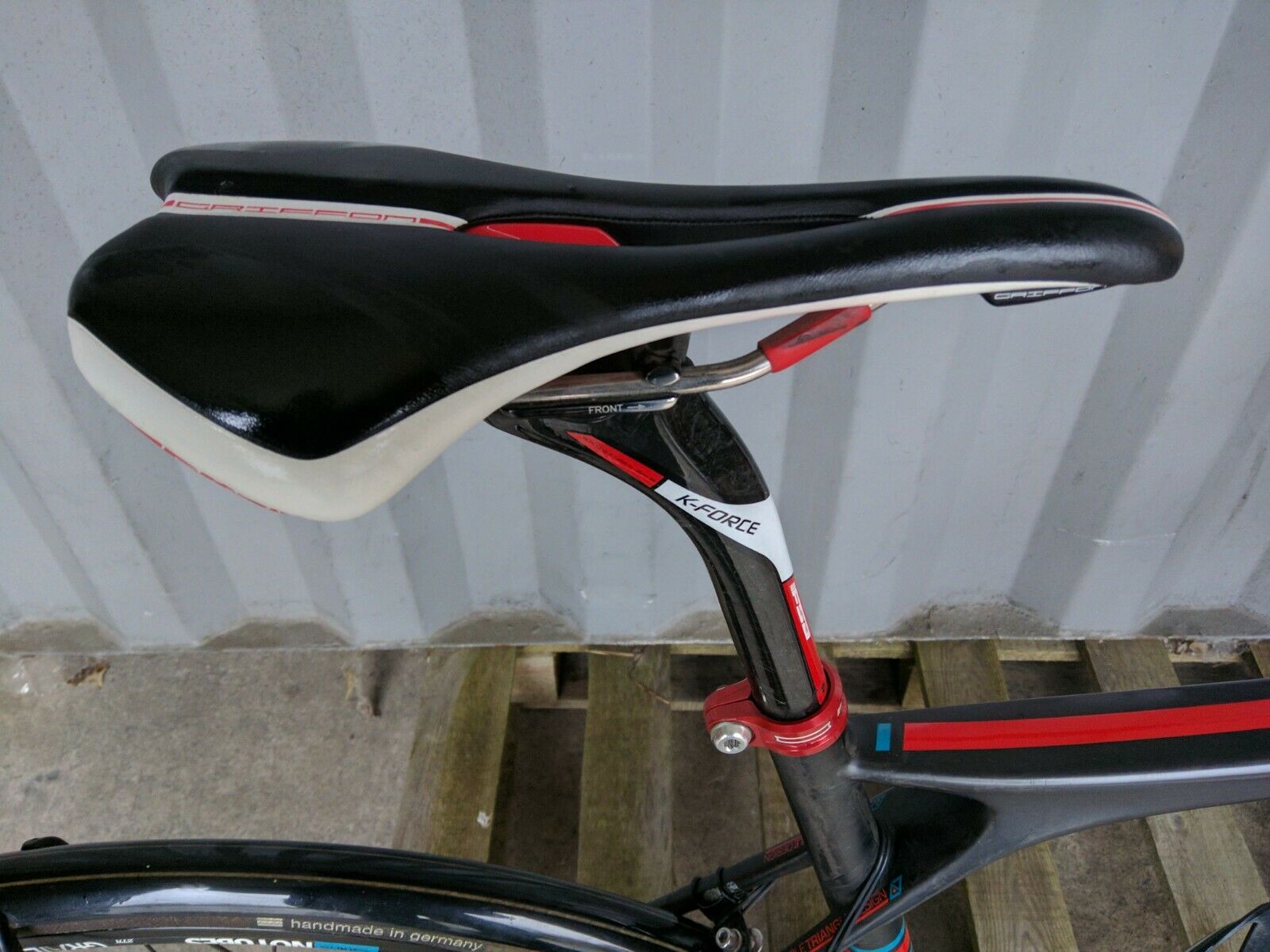 As bought, it weighs 9.15 kg. That compares with my Giant at 8.2 kg and my Colnago at 7.65kg (with carbon rims). No doubt the mudguards weigh something, but not much. The disc brakes will weigh quite a bit more than the rim brakes on my other two bikes. And it is going to weigh even more once I've fitted those 35mm tractor tyres! Looks like I'll have to lose some weight. Maybe I'll look for a 34T cassette!

Rides that could have used a gravel bike

It seems like fate that this bike came along. Good spec, great price, the correct size and in the new blog colour scheme! Once I get the fat tyres on, I'll take it out for a spin and report back!