There’s nothing like a deadline to get things done. Fed-up with this winter’s incessant shit weather, I decided, on a whim, to drive to the south of France for a few weeks. That gave me a few days to finish the jobs I had to do to my Grade gravel bike.

When my new SunRace MS8 Wide-Ratio (11 Speed) Black 11-36t cassette arrived, I was surprised to see the name ‘Sturmey Archer’ on the box. That was a blast from the past from when I was a kid. They used to make hub gears back then. I had no idea they were still around. I since found out that the name was bought by SunRace in 2000. 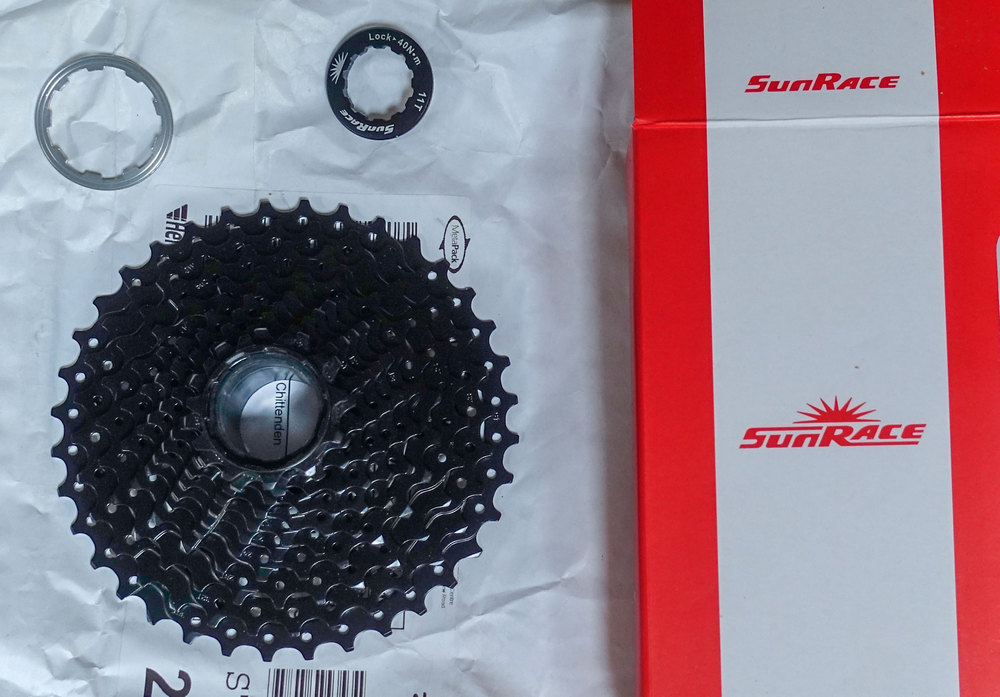 First thing was to remove the existing cassette, a Shimano 105 11-28t. 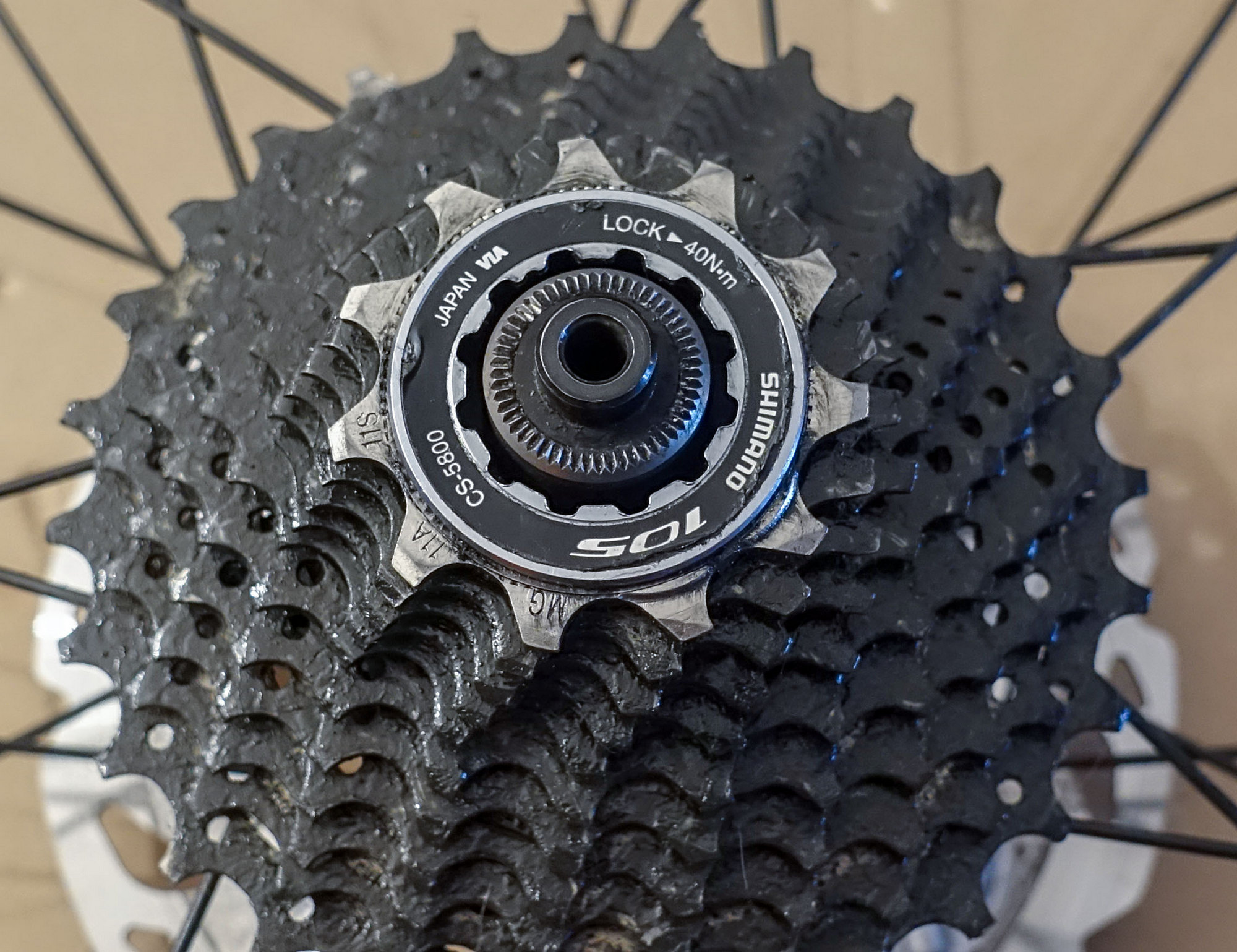 Every time I use a chain-whip I can never remember which way round it wraps, so I decided to take a photo that I can refer to in future. 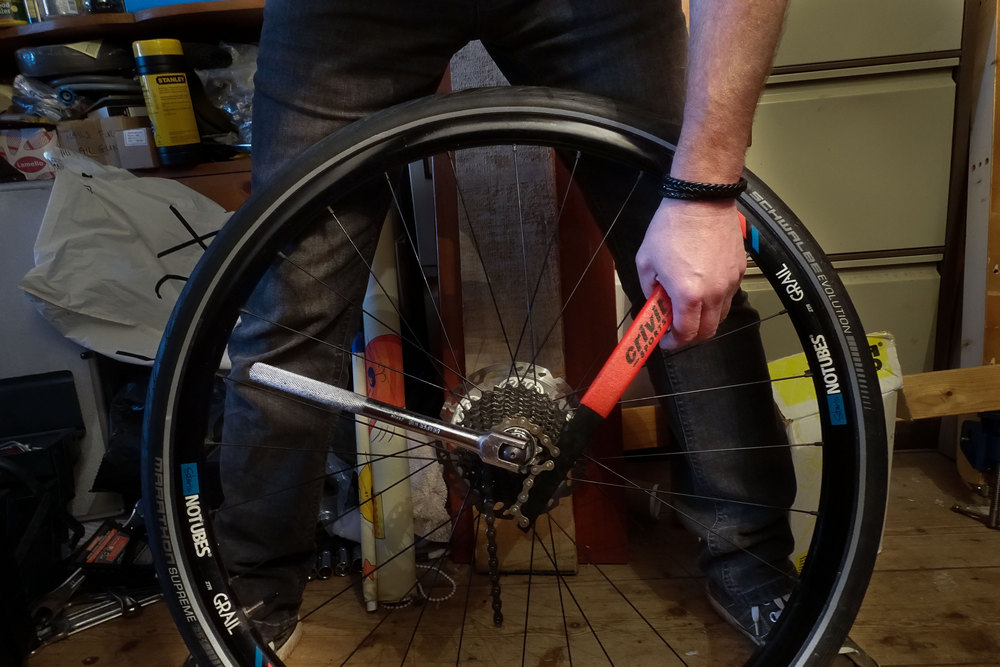 Once I had removed the cassette, I thought it would be a good opportunity to take the freewheel hub apart and regrease it to stop it making such a racket when freewheeling. First I carefully prised it off with a screwdriver. This is OK if you don’t exert undue force. 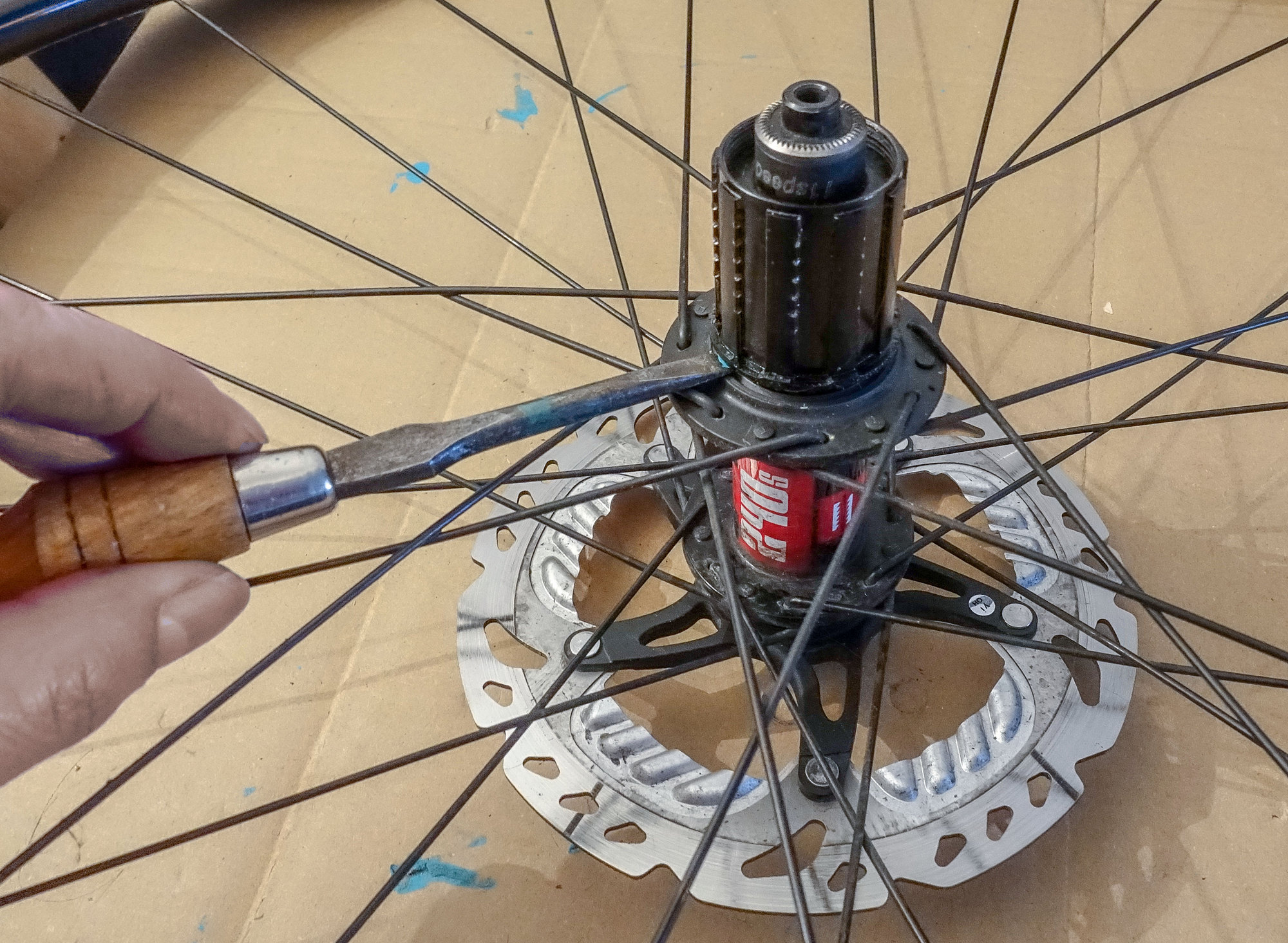 There were signs of wear on the freehub body caused by the cassette digging into it. That’s not unusual. It came off easily, as did all the other parts. I cleaned them all up. 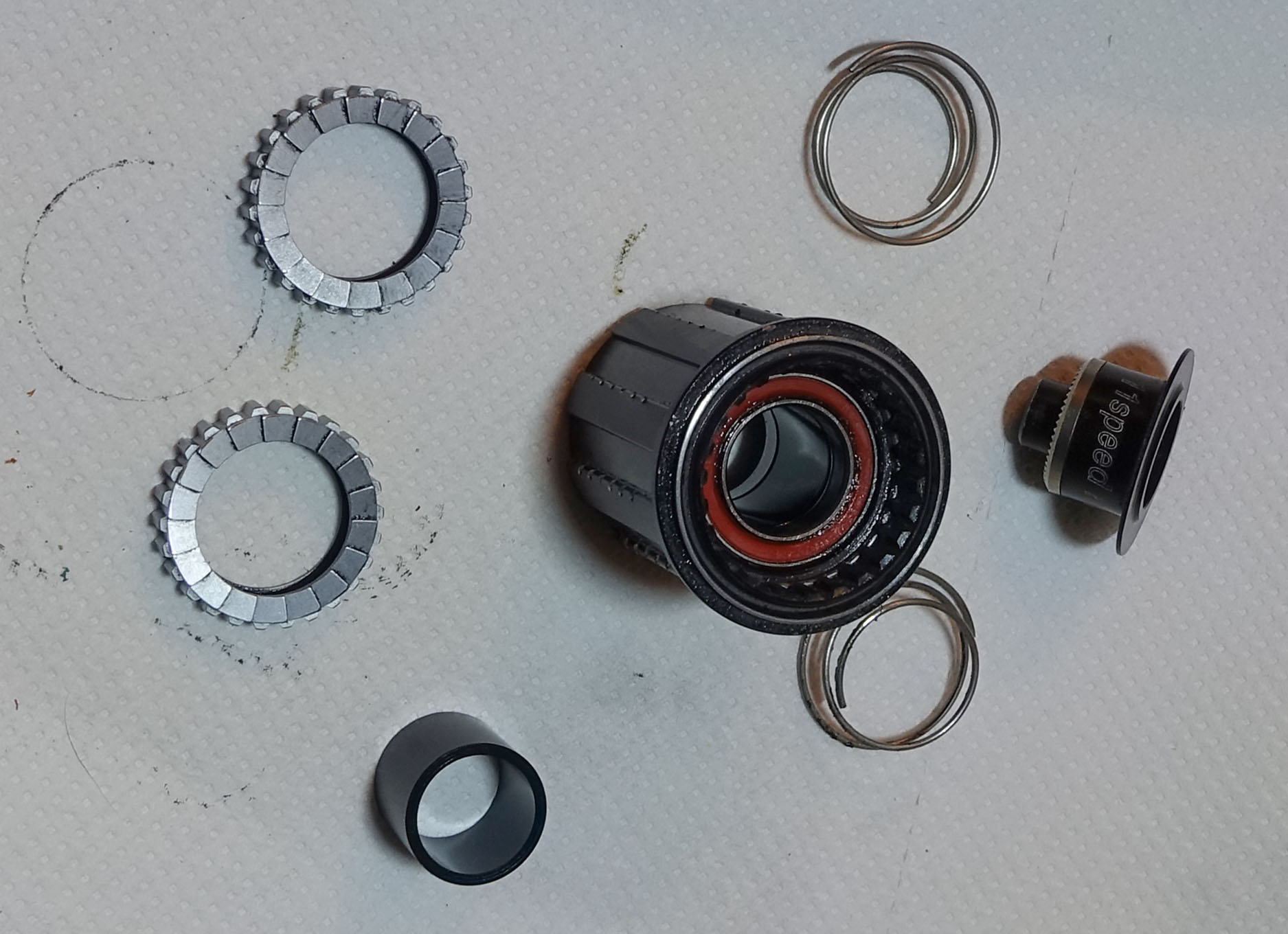 .. and inside the hub 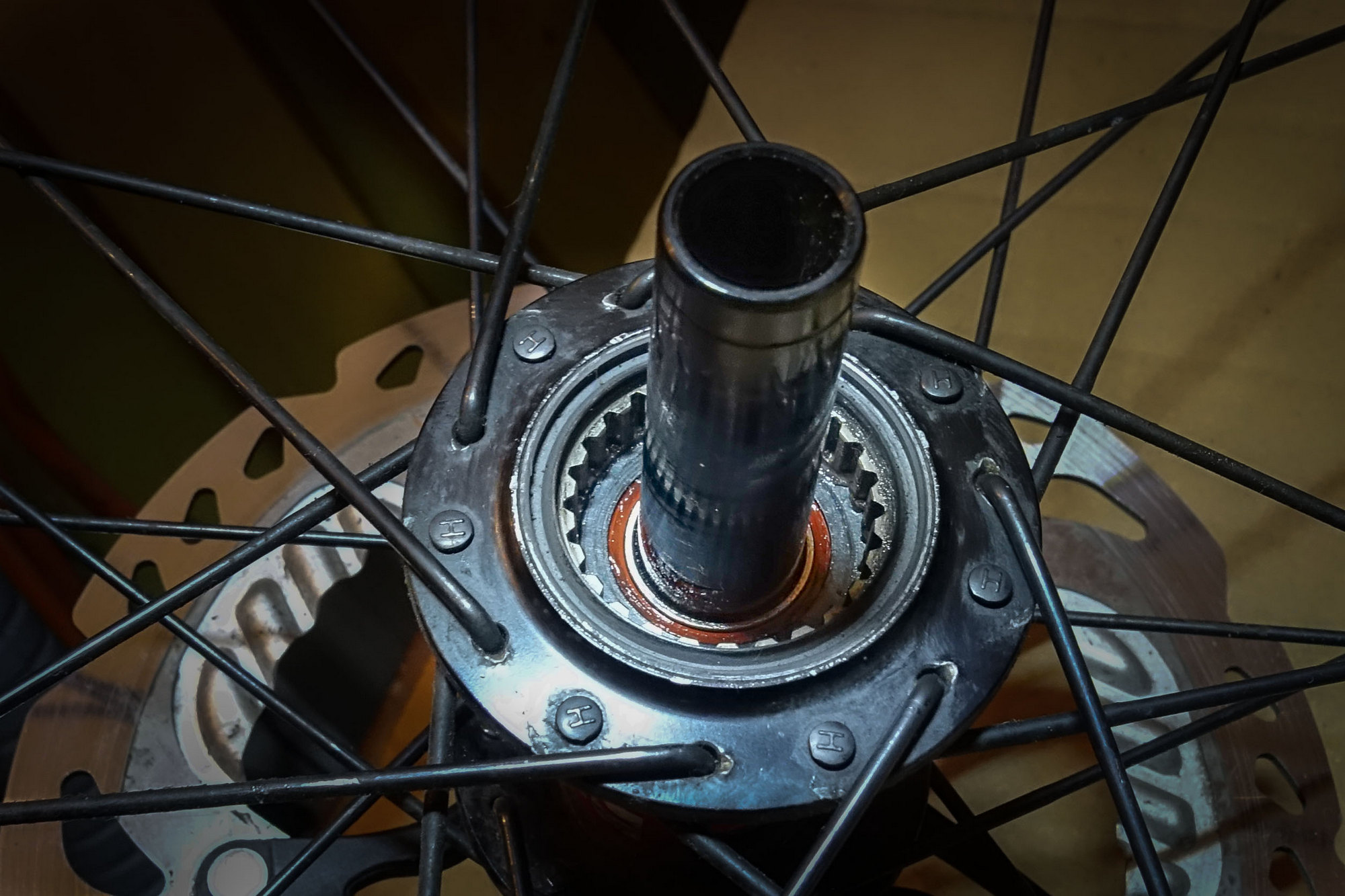 Everything was in great condition. I greased all the parts using the DT Swiss grease that I already had from when I serviced my Reynolds carbon rims. 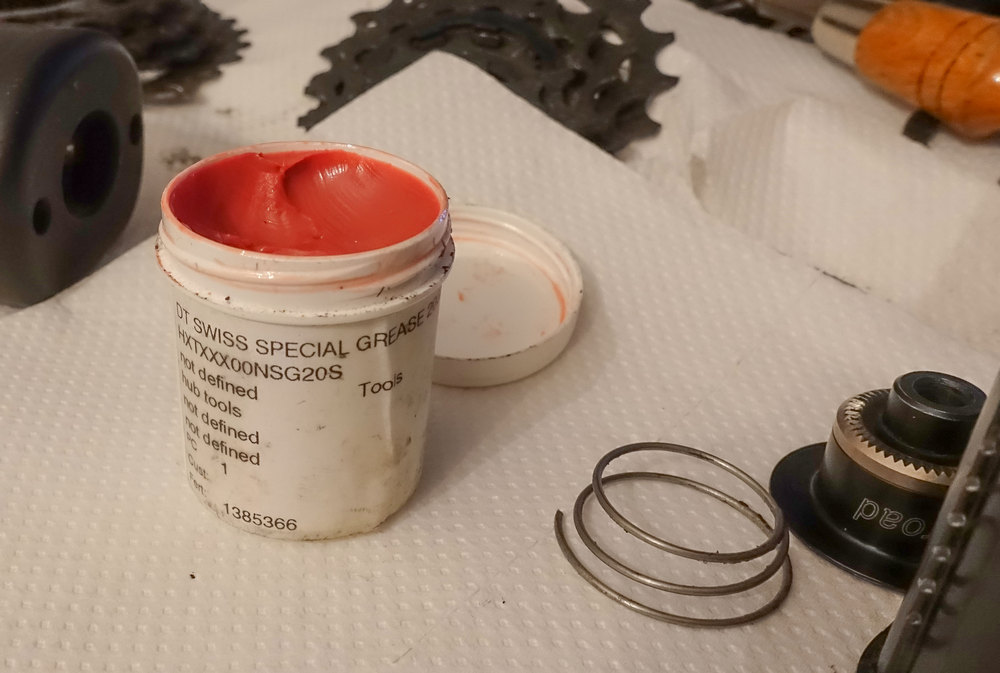 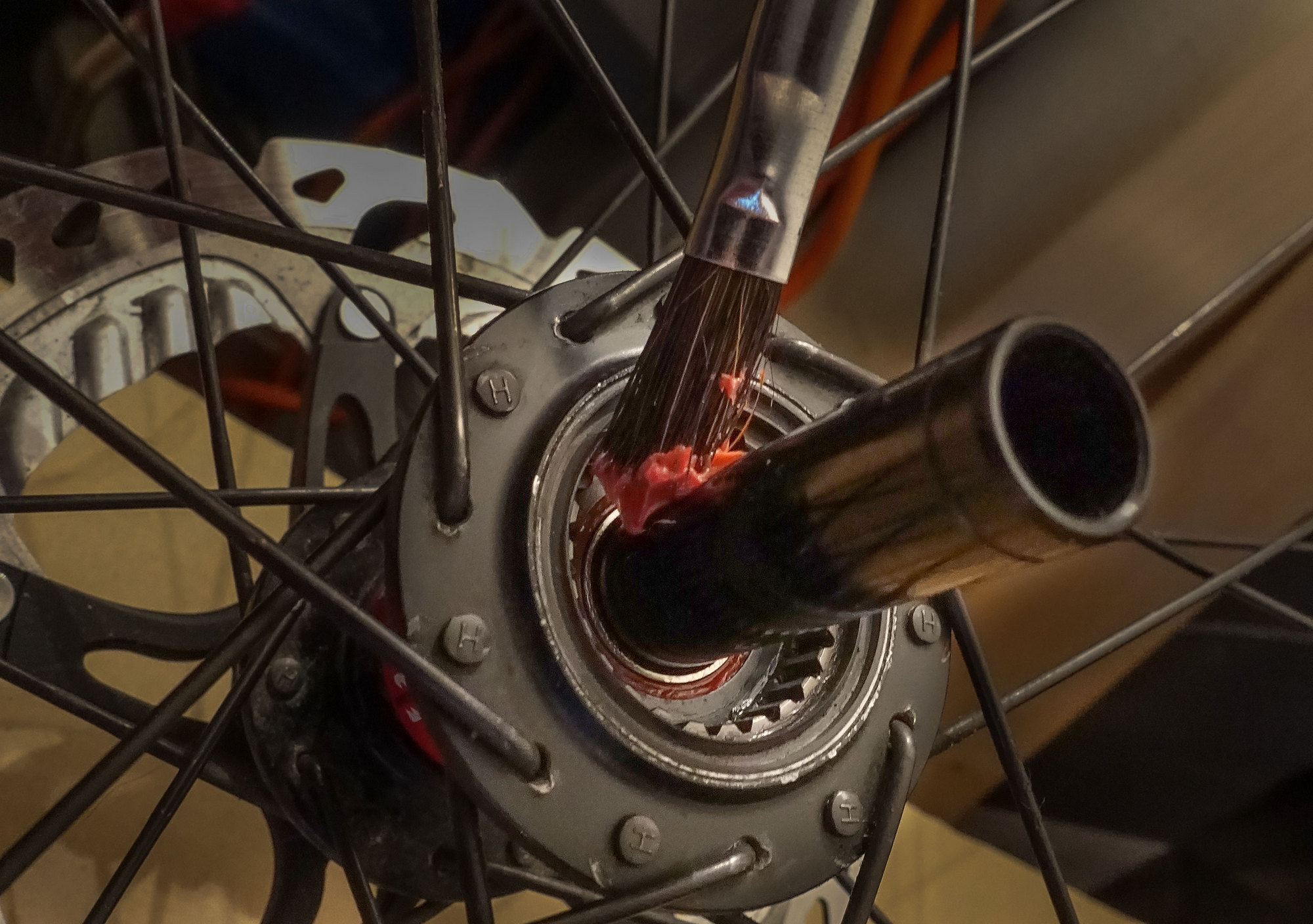 The rachets are the things that cause the noise and I greased them as recommended. Then I fitted it all back together and installed the new cassette. 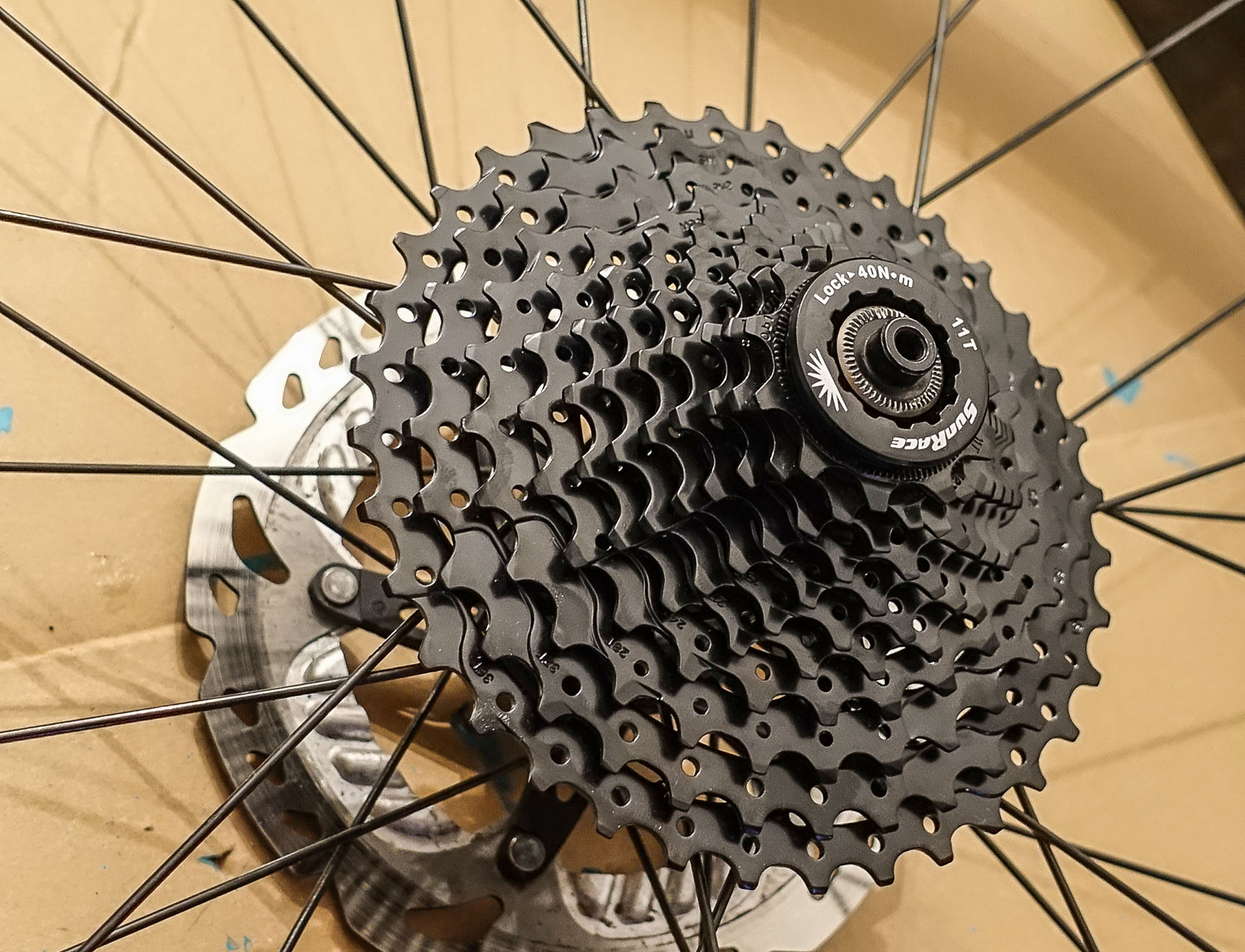 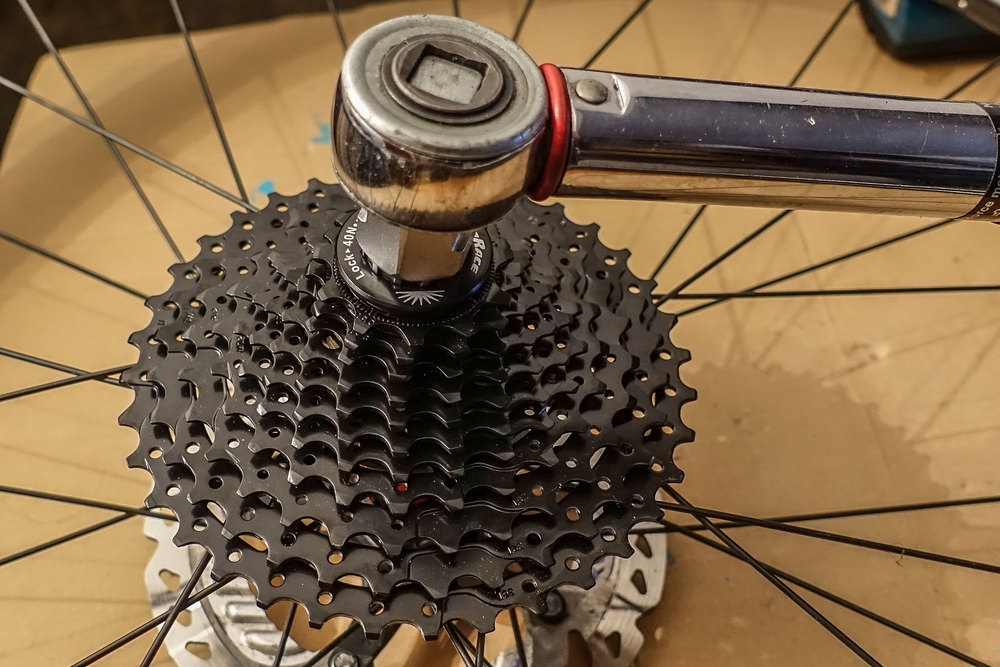 The old chain, cassette, chainrings, etc on this bike were covered with a really sticky, gungy black grease. It looked like the previous owner had used crude oil as lubrication. I soaked the chain and derailleur cage plates in some Fenwicks 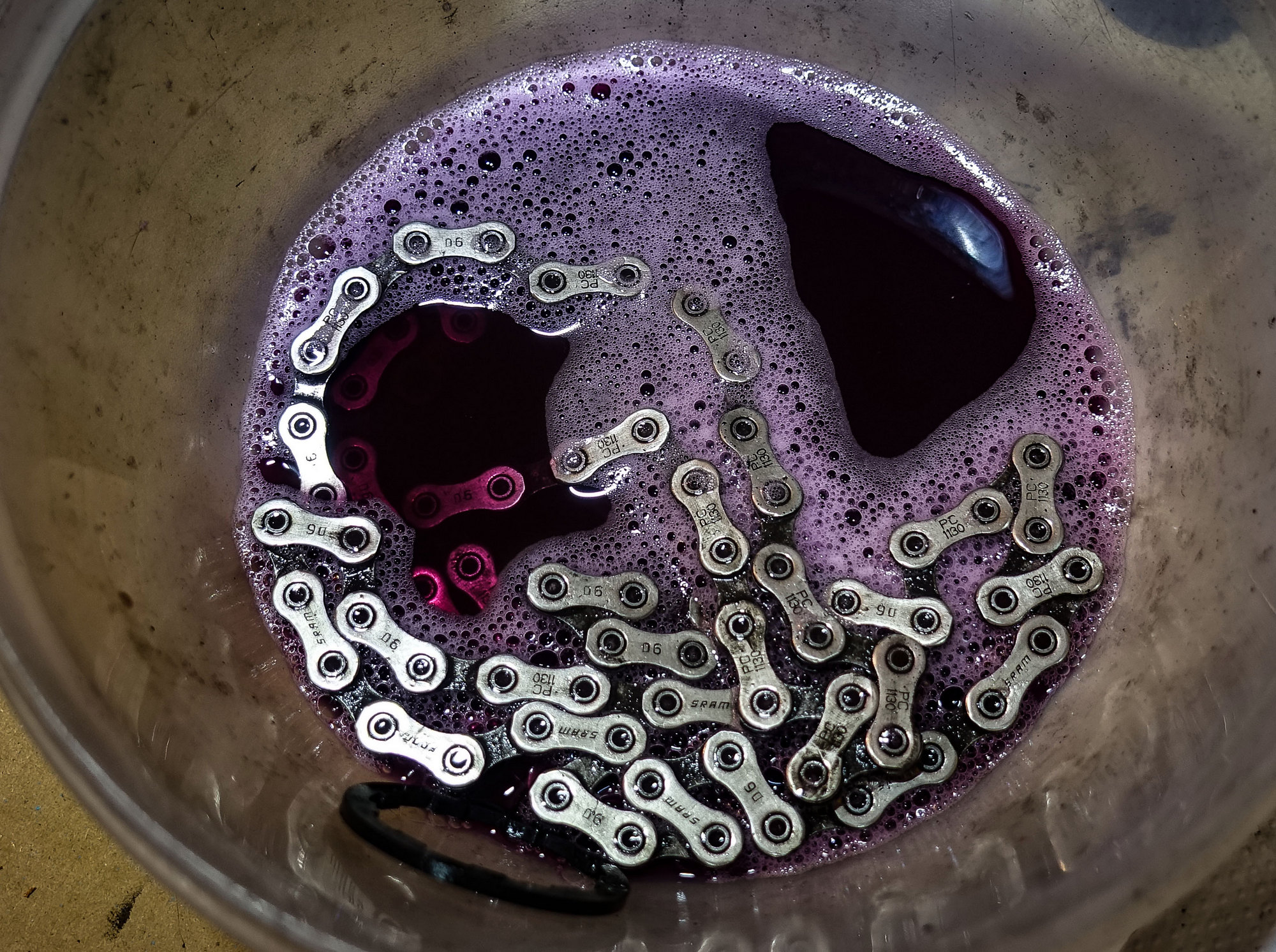 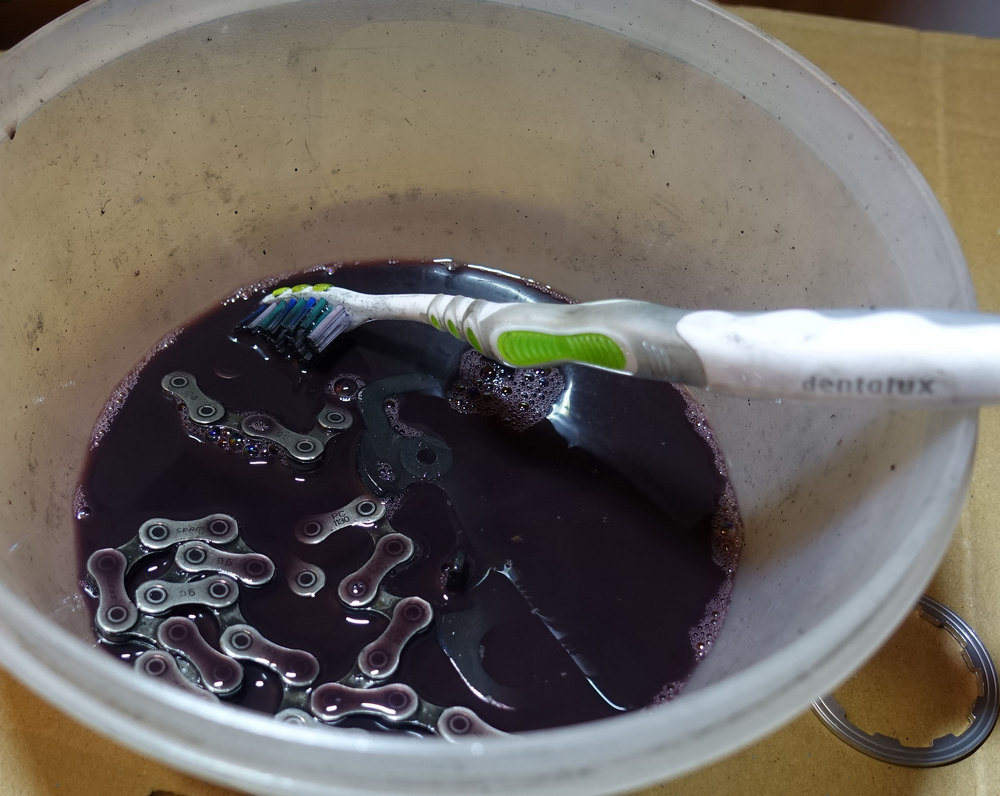 The next morning I rinsed the chain with water (narrowly avoiding losing the missing link down the plughole!) and dried it. 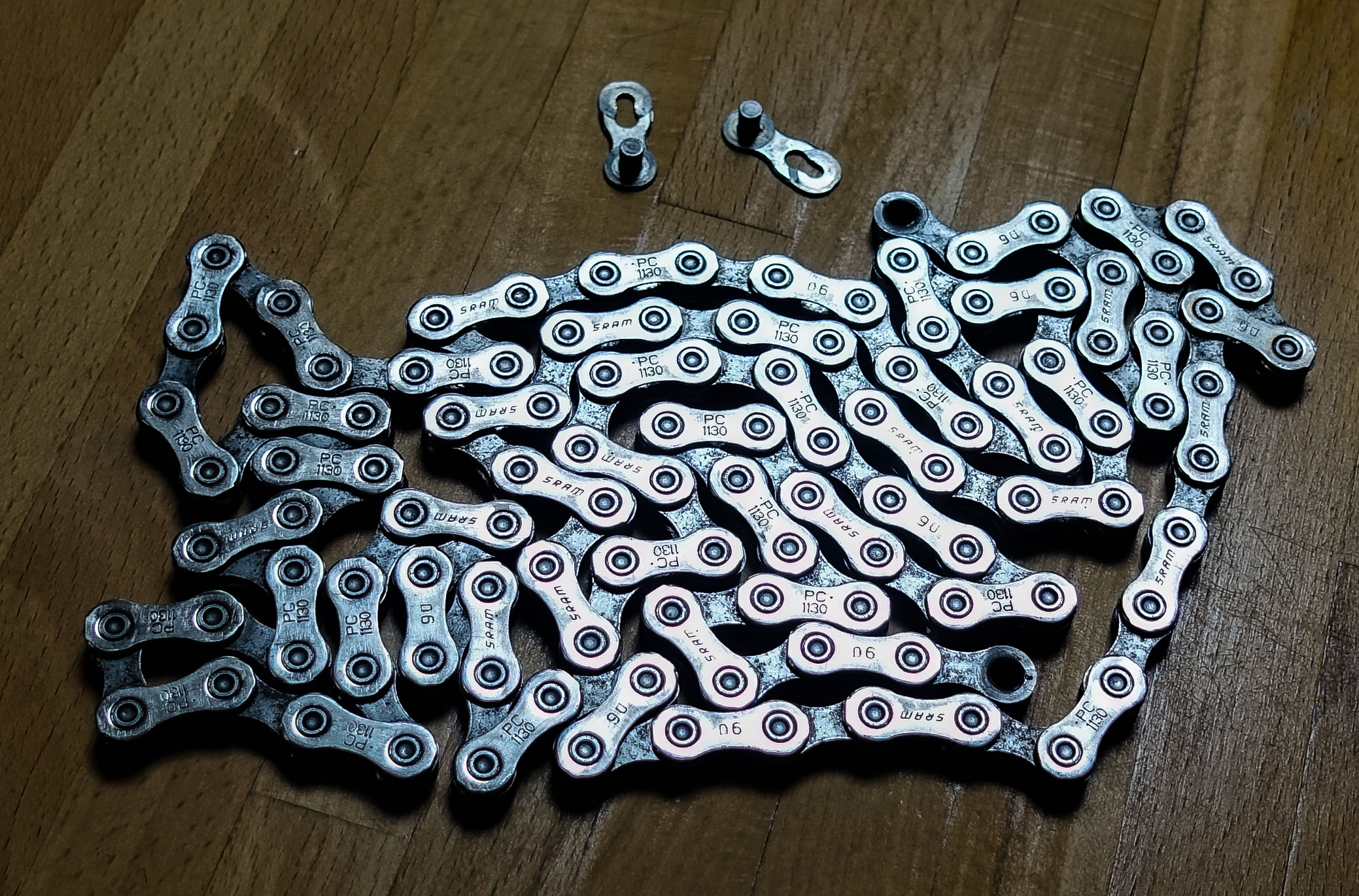 It was a SRAM PC1130 with hardly any wear according to my chain wear indicator.

I cleaned the idlers. Even though they look exactly the same to me, one of them (on right) has GUIDE PULLEY printed on it and that one goes at the top, nearest to the cassette, to ‘guide’ the chain. 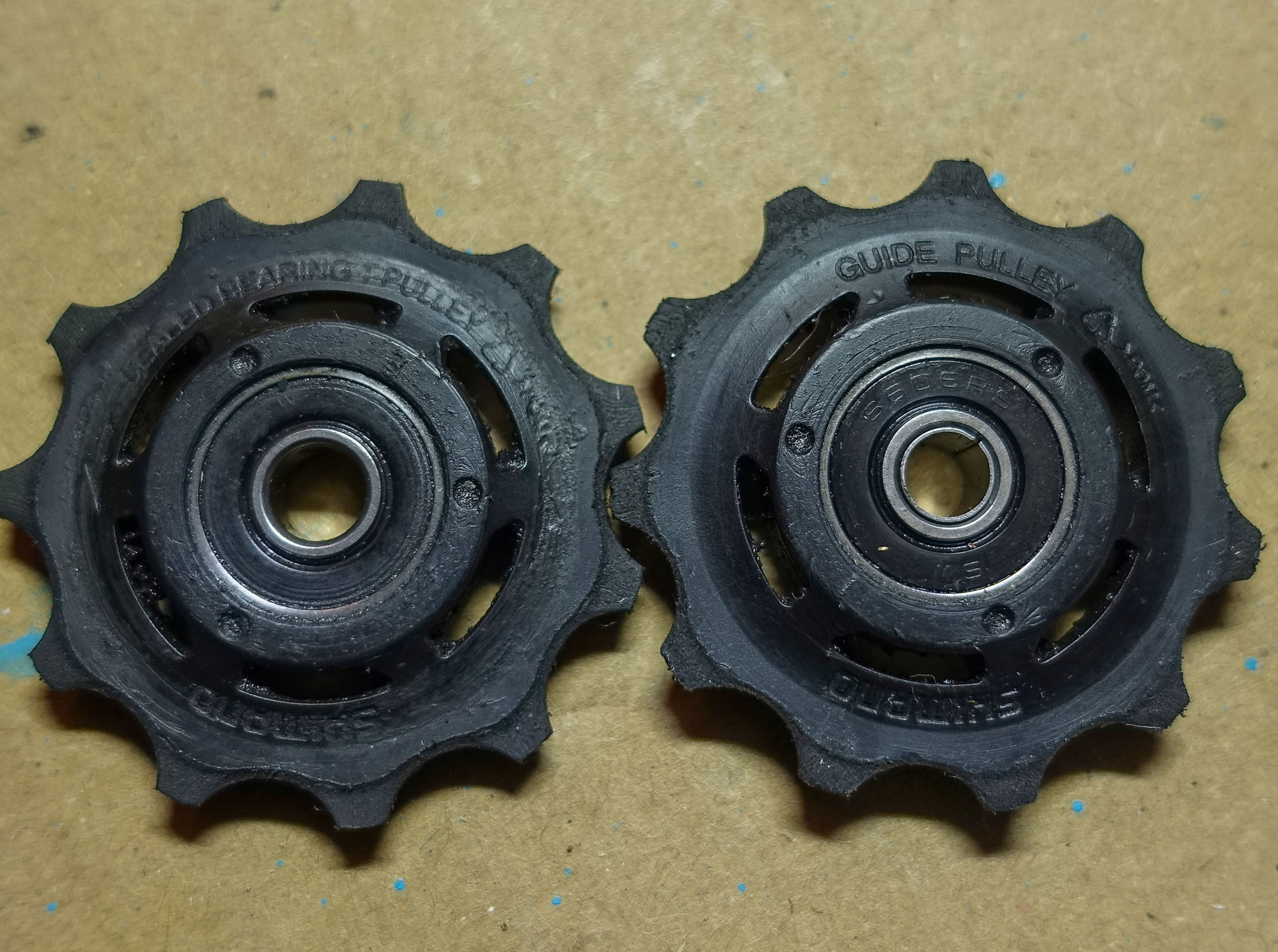 I removed the crankset with the intention of swapping the chainrings from my Colnago (50/34T), for the lower gearing. 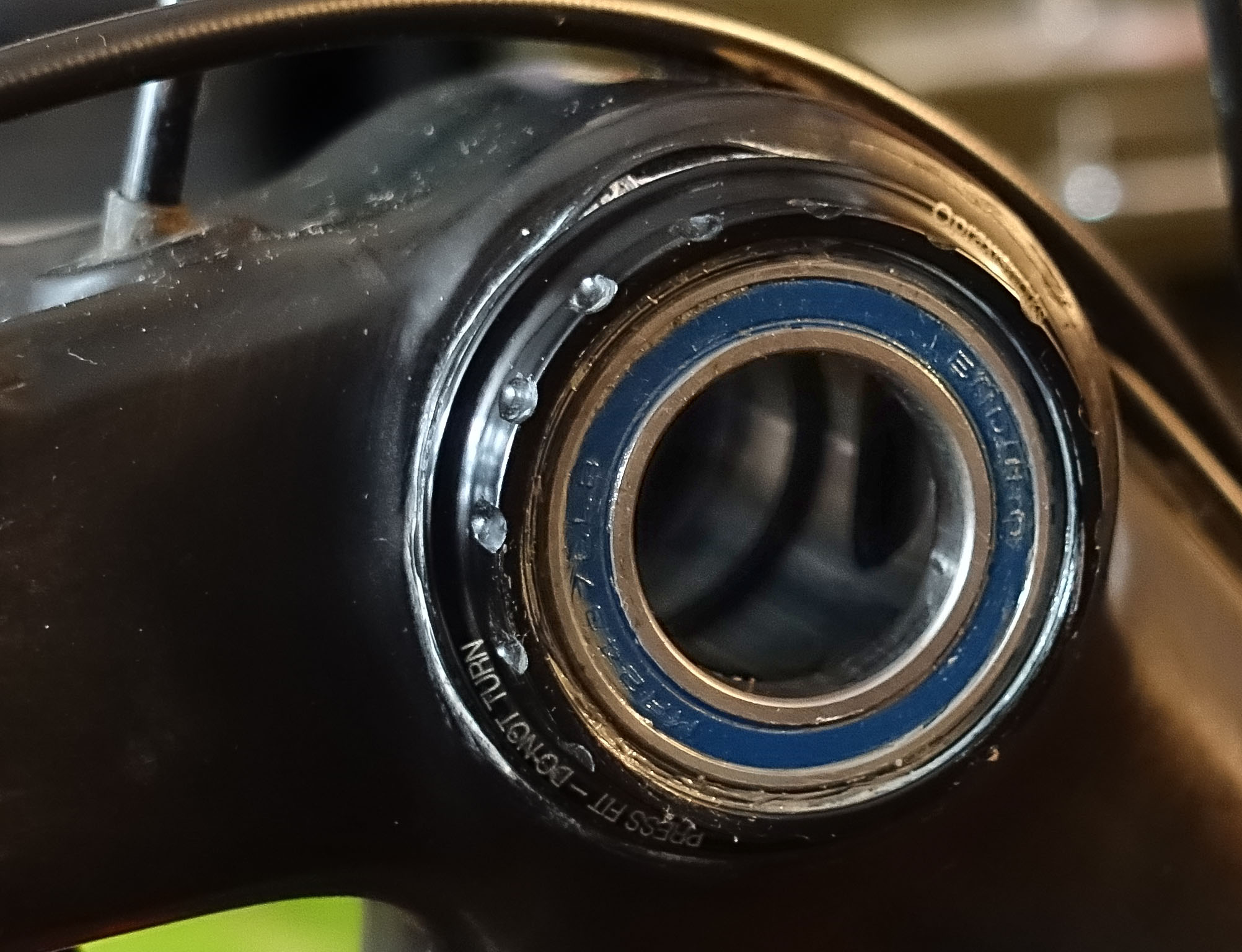 .. but soon realised my mistake when I saw that the Ultegra crankset from the Grade was the newer 4-spoke design, as opposed to the Colnago’s 5-spoke. I prefer the look of the newer 4-spoke. 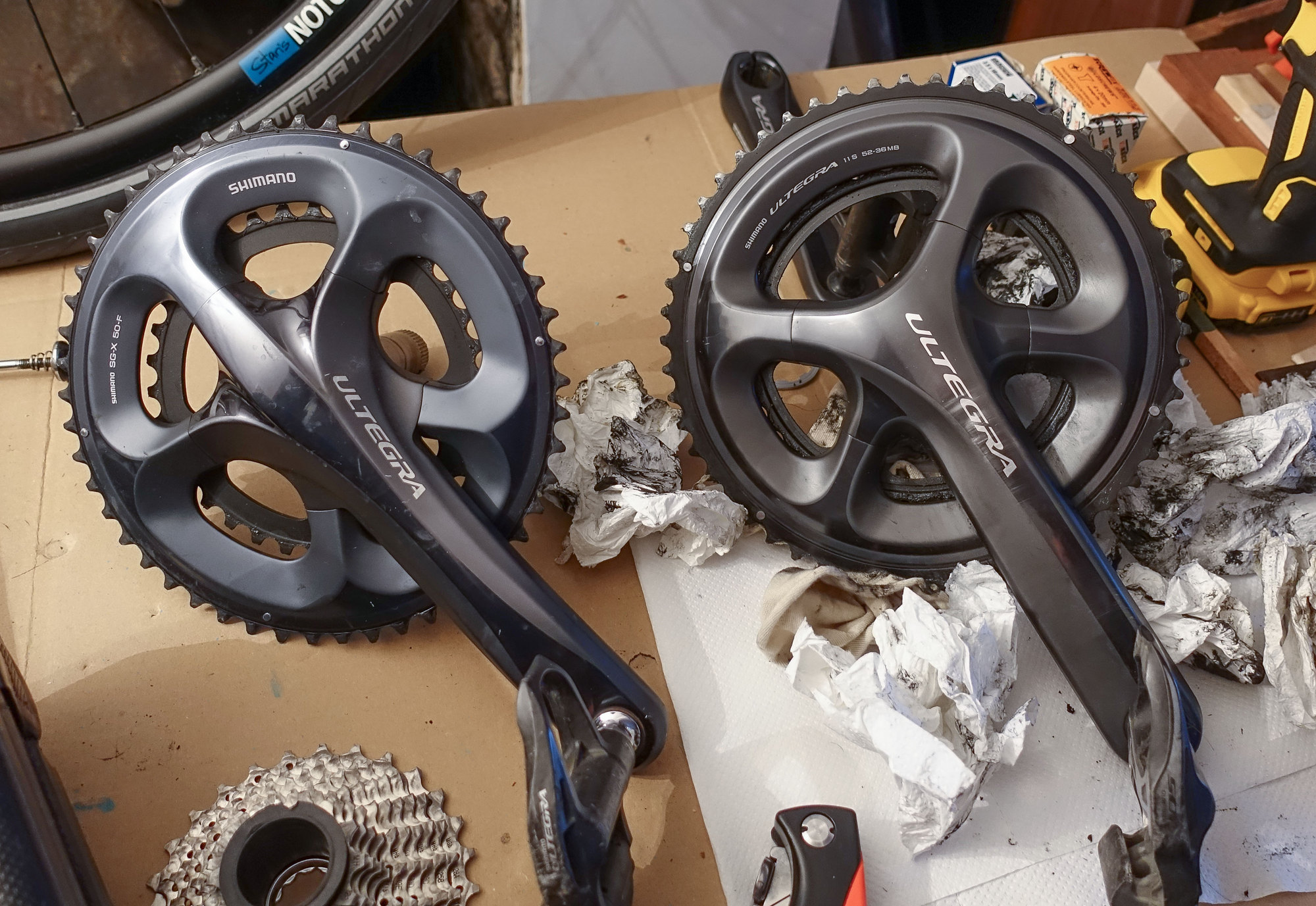 So instead of swapping the rings I swapped the complete cranksets between bikes. Then I refitted the now clean chain, reassembled the rear derailleur cage and checked how it looked. I soon realised there was something not quite right when I came to look at the derailleur in action. I concluded that the hanger was out of line, so, grabbing hold of the derailleur, I ‘persuaded’ it back into alignment. Then I continued to test gear changes. It was really pushing (read ‘exceeding’) the limits of the derailleur, but nevertheless it could sufficiently clear the big 36T cog The derailleur also allowed the chain to stretch when on big/big (50T/36T). However, things didn’t look ideal when on small/small (34/11T) The chain was touching the chain on the top jockey wheel. This wouldn’t be the end of the world in use because that combination shouldn’t be used anyway, and it wouldn’t do any damage if you momentarily ended up in that combination. However, it was not ideal, and I decided to get a new rear derailleur with a longer cage.

I could have chosen the Shimano 105 RD-7000-GS rear derailleur, but seeing as the word ‘Ultegra’ is in the model name of my bike, and because of a slight snobbishness on my part (despite the fact that 105 is quite well-respected these days), I chose the more expensive, and no doubt fractionally lighter, Ultegra R8000 GS 11-Speed Medium Cage. It’s a very long cage to be called ‘medium’. 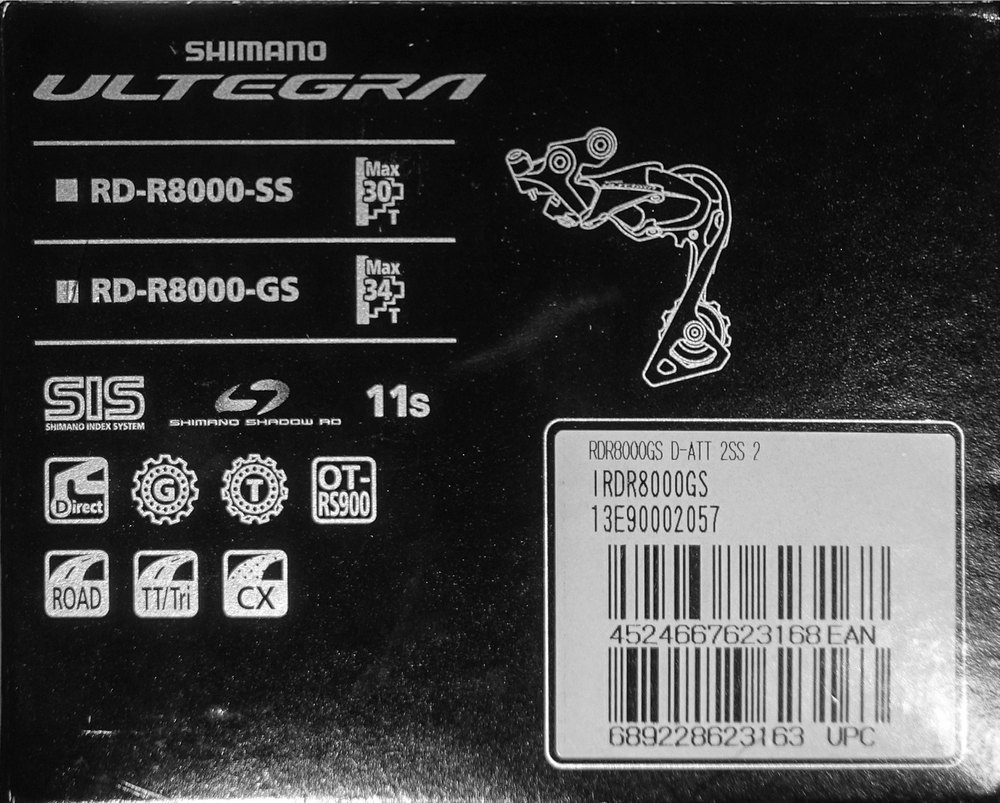 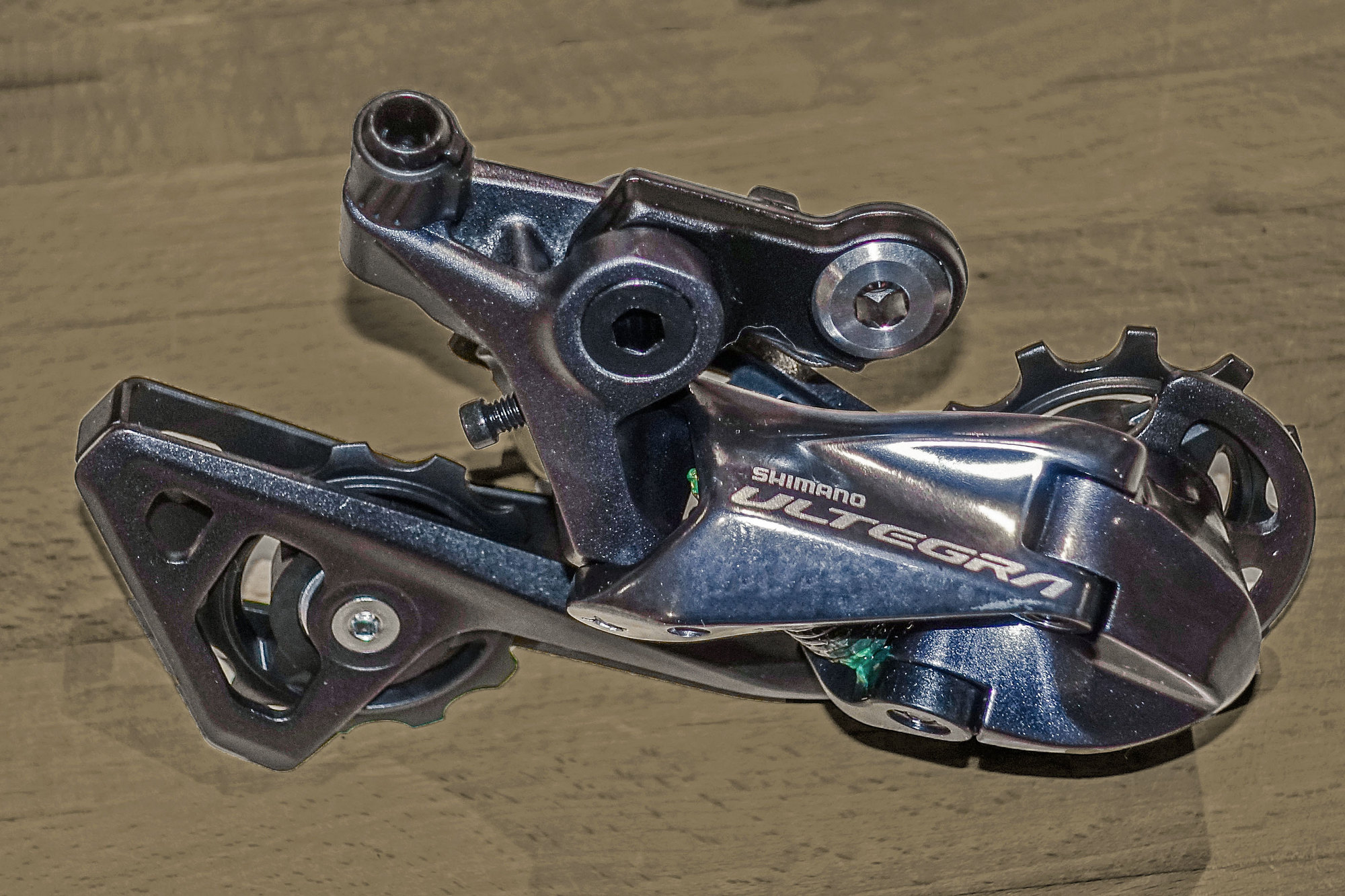 Whatever, it certainly looks the business!

So I removed the old derailleur 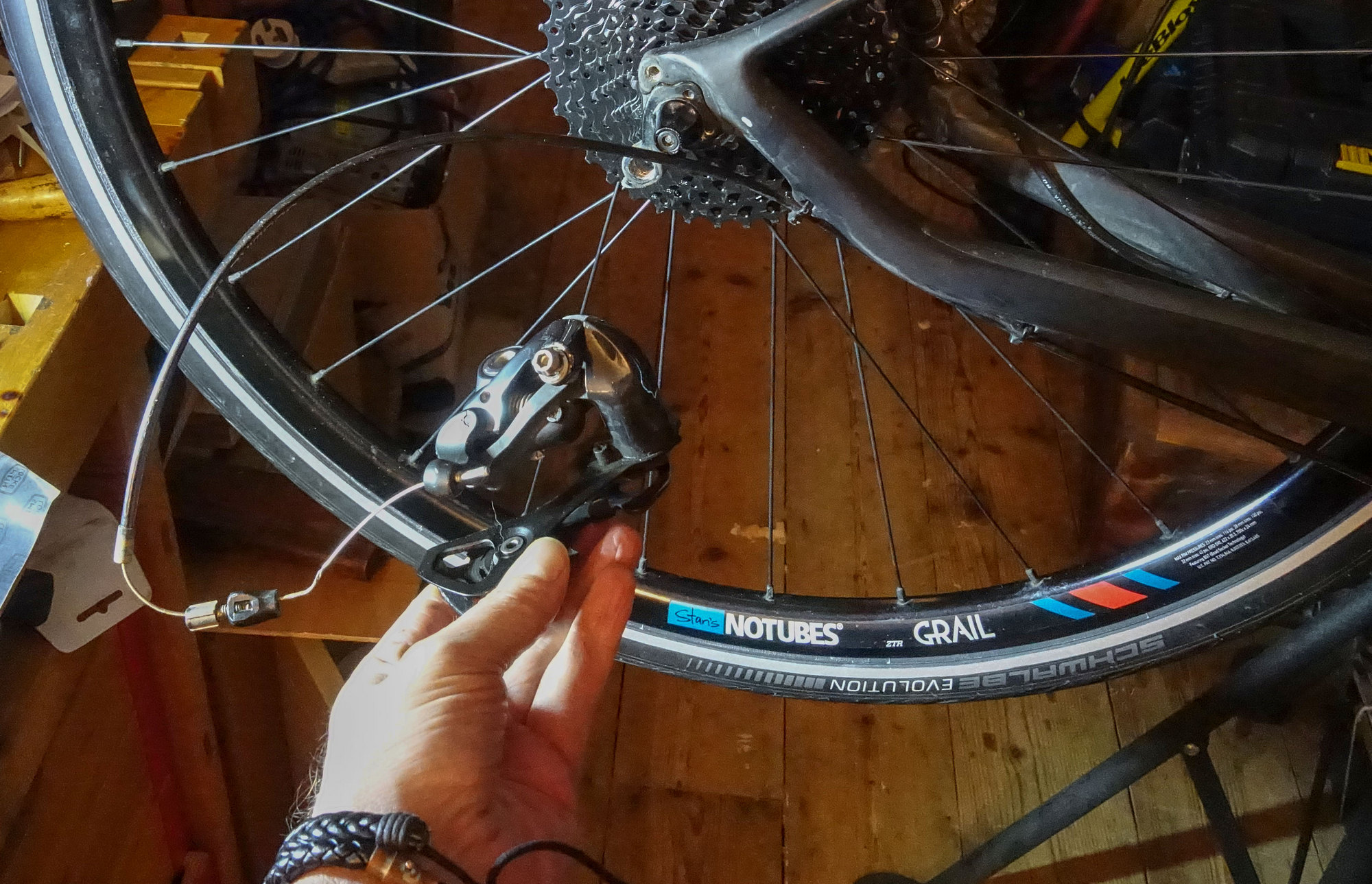 … and fitted the new one. The new one could have done with a shorter cable outer, but as the cables on the Grade are fully covered over their entire length I would have had to mess about trying to swap the ferrule over, so I left the cable with a big loop in it and removed one of the cable ties to prevent too tight a radius. The derailleur coped with big/big OK. I also bought a new chain and tried it at its full length but it was much too slack on small/small, so I cut two links out, to make it the same size as the one that I’d removed. It works fine in big/big (photo above) and small/small (below) combinations. I refitted the 52/36T crankset to my Colnago and had to move the front derailleur up slightly to clear the larger 52T chainring. I adjusted the new R8000 rear derailleur in line with recommendations and that was the job done. I still haven’t ridden the bike! But I’m out of time now, as I’m leaving for France tomorrow.

2 Replies to “More Upgrades to Grade”