I’ve had an interest in cycling all my life, but it’s only recently that I have developed the same sort of passion for it that I had as a boy. When I was younger I used to be bike mad. My parents used to call me Bicycle Repair Man, a reference to a Monty Python sketch, because I was always making up bikes out of old bits that I had found.

I used to love planning rides into the unknown using 1″ ordnance survey maps and then riding them. Nowadays I plan my routes on-line, download the data to my Garmin and then ride them! The planning still holds a great fascination for me – looking at an unexplored section of the map and thinking “I wonder what’s there?”.

Some of the rides I can remember from back then included riding to Harlow, Essex (from Bermondsey) with a friend. I remember that it was really foggy and freezing cold going through Epping Forest, and when we got to Harlow we had to wait outside a café until it opened, it was so early in the morning. God knows what time we had set out, must have been 5 or 6 AM! Another time I remember cycling to Southend and back, and then somewhere in Kent the next day, totalling 110 miles for the weekend. I also remember cycling to Virginia Water and back on my own; that must have been 60 + miles. All this was before I was 13 years old!

I used to belong to the Rodney Cycling Club based in Kitto Road, Nunhead. That club doesn’t appear to exist any more. I wasn’t with them that long but I can recall cycling up Leith Hill with them, after meeting up somewhere near The Oval, I think (if anyone knows where, please let me know). I also remember a 10-mile time trial out on the A20 near Badgers Mount, that half killed me, and a hill climb in Ranmore that I still have the results sheet for: 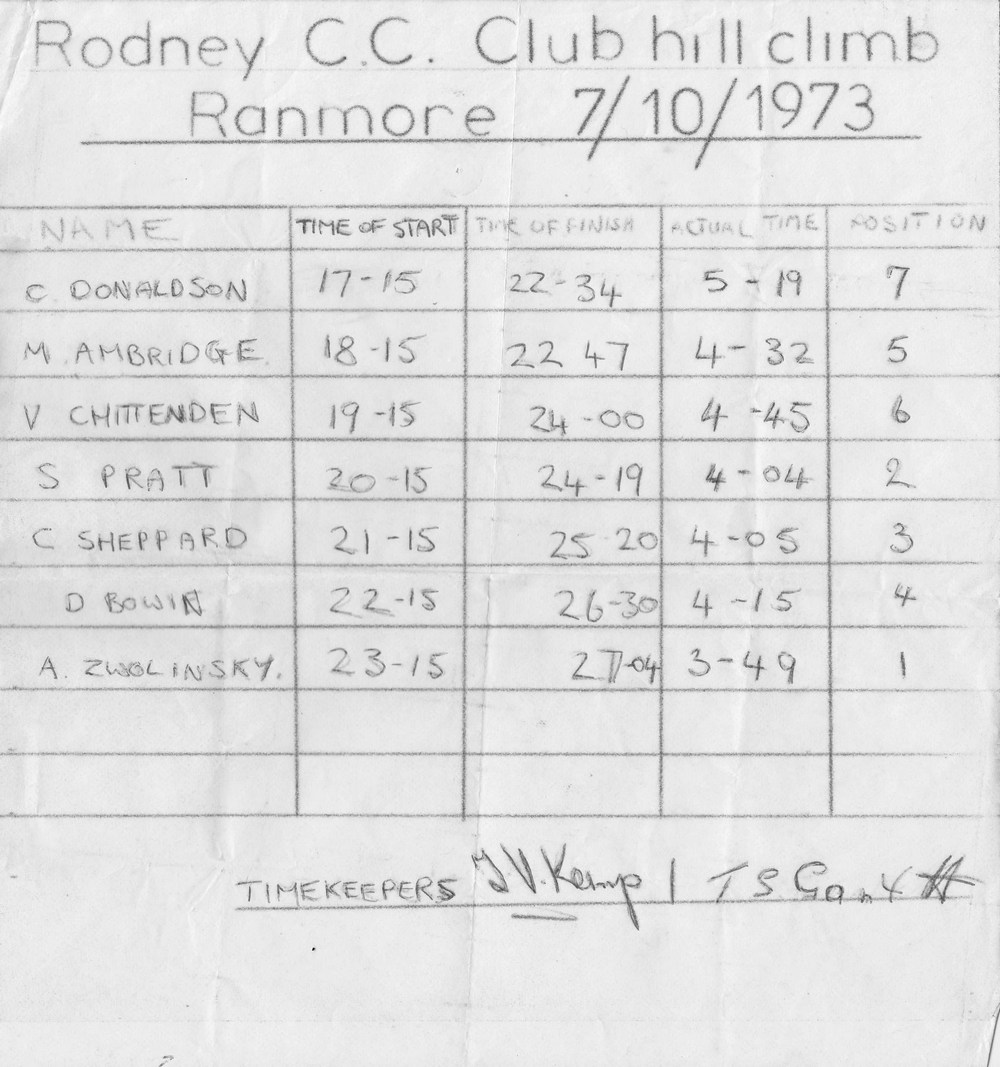 On that sheet it looks like someone (maybe me at the time) has gone over the letters in pen, but I see that David Bowin looks like it says David Bowie underneath!

I used to go to Herne Hill cycle track every Wednesday (?) evening. I also remember going to the Skol 6-day Track race at the Wembley Empire Pool indoor arena on my own. I still have the program for that somewhere.

Between the ages of 15-17 my bike became merely a mode of transport. I used to cycle from Lewisham back to Bermondsey where my friends were. Then from 16, I would cycle to my girlfriend’s house in New Cross. When I was 17, I got a car and the bike became used much less. I used to use it for travelling to work. Throughout the 80’s and early 90’s I commuted to London off and on, but the bike was never used purely for recreation during that period.