As mentioned in my last post, I’m down in the south of France escaping the British joke of a winter. This is the first test of my GT Grade gravel bike. I mean today is literally the first time I have turned a pedal on it, firstly by riding it around the car park for approx 30 seconds to make sure gears work and that it didn’t fall apart before setting off on this ride! 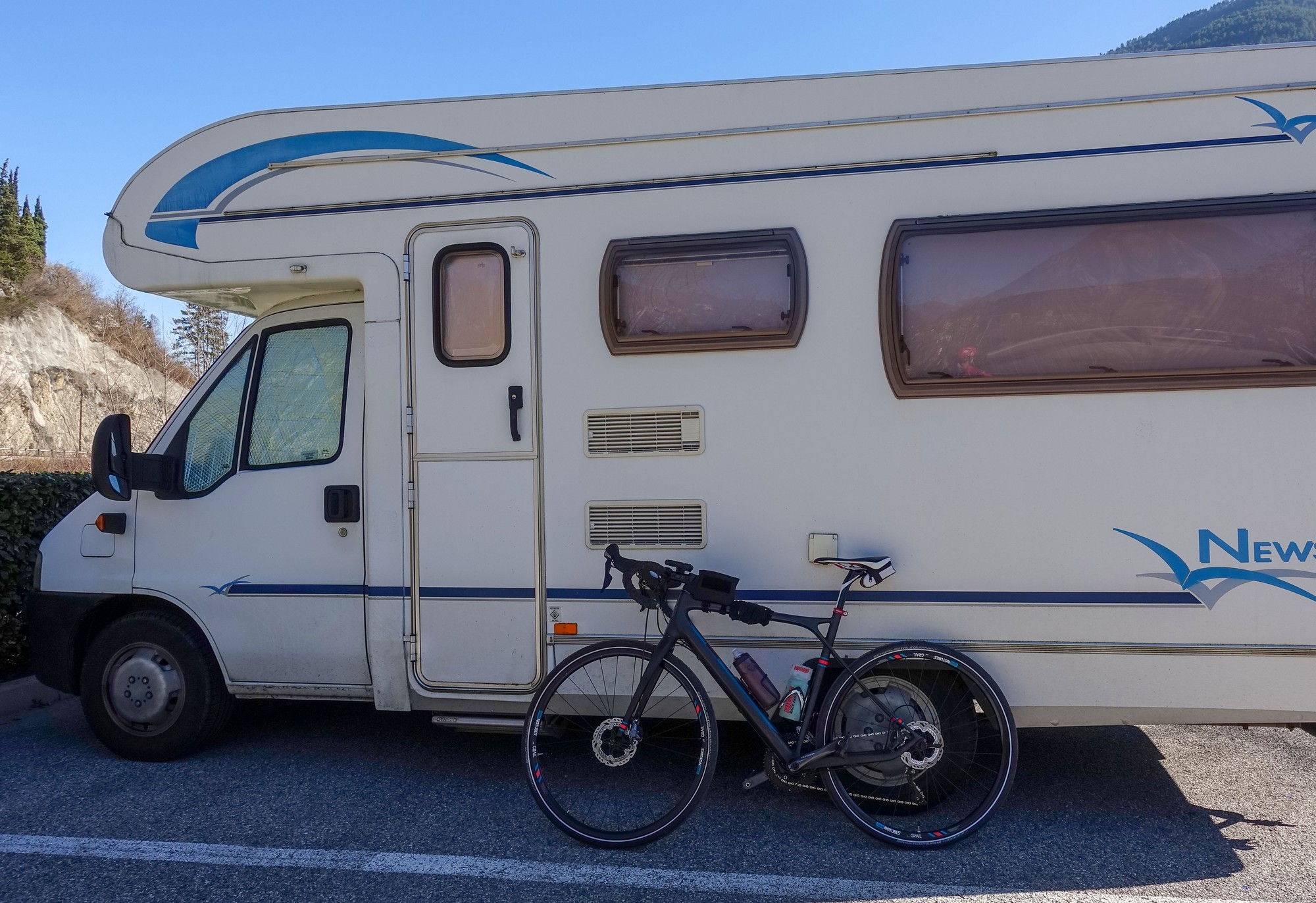 The route I had chosen was questionable considering I’ve gone four months without riding.  As usual I recorded live, direct into my phone, at various points:

First report coming from just the other side of Puget Rostang. 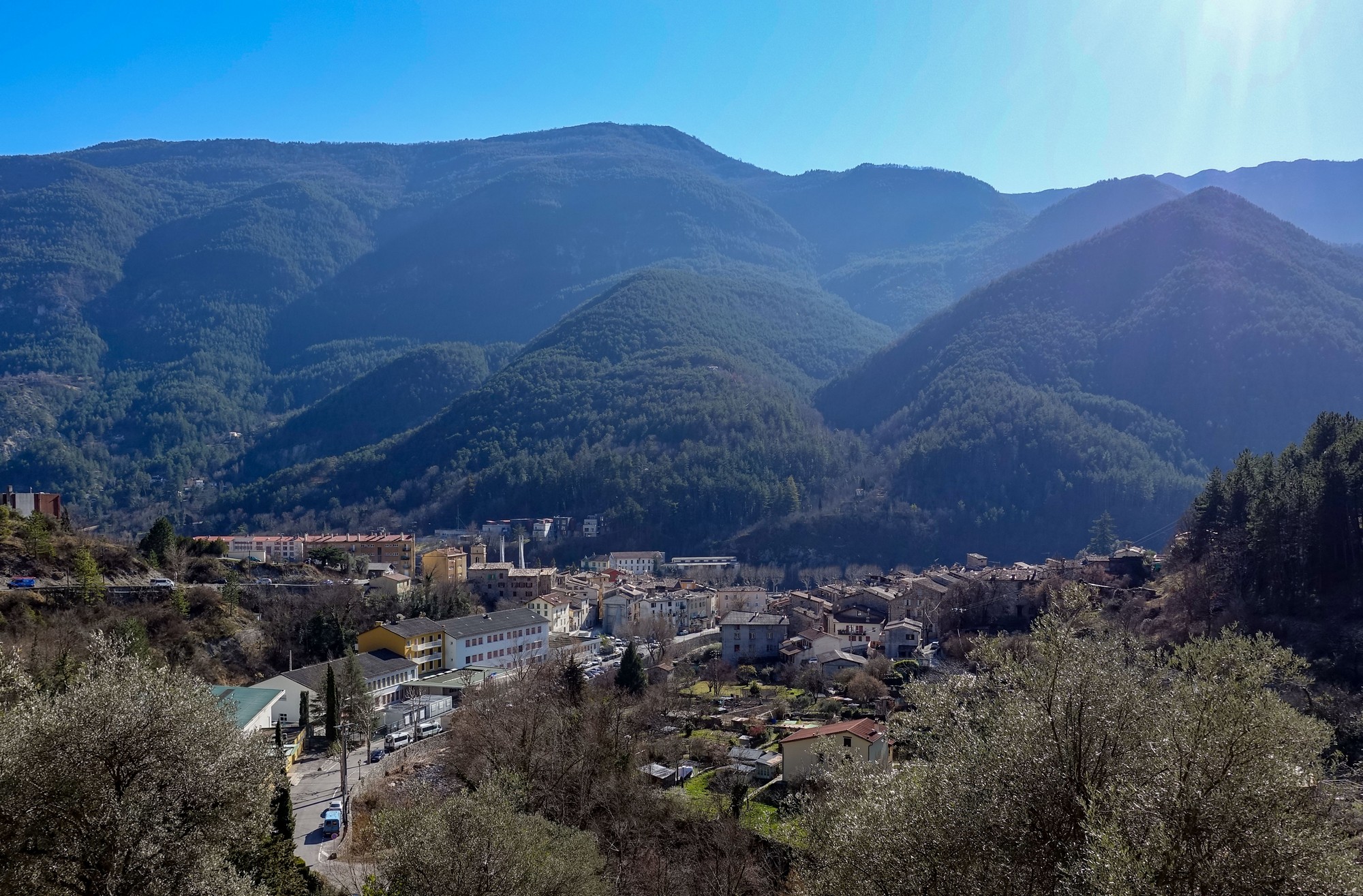 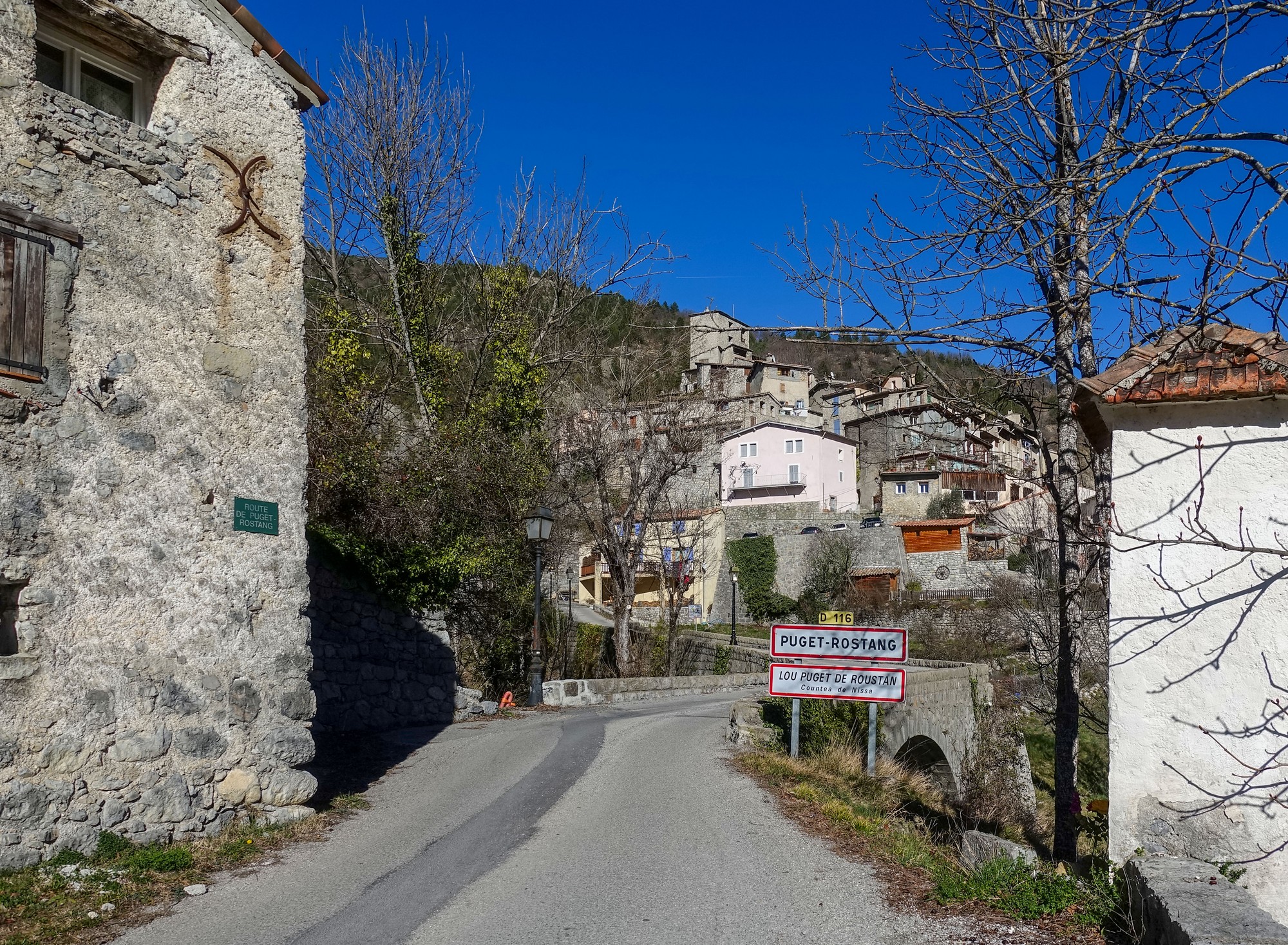 It is a scorching hot day. Well, at least for February – about 26ºC. I’m not sorry that I wore my shorts and short-sleeved top and I’m not sorry that I wore my mitts, but I slightly regret wearing my base layer, it’s that hot. Considering that I’ve never ridden this bike before today, all the set-up I had done in the ‘workshop’ on the gears and adjusting the saddle etc were bang on, because the derailleurs are silkily quiet and it’s changing gears flawlessly on both the front and rear derailleur. And also the DT Swiss hubs are lovely and quiet too. 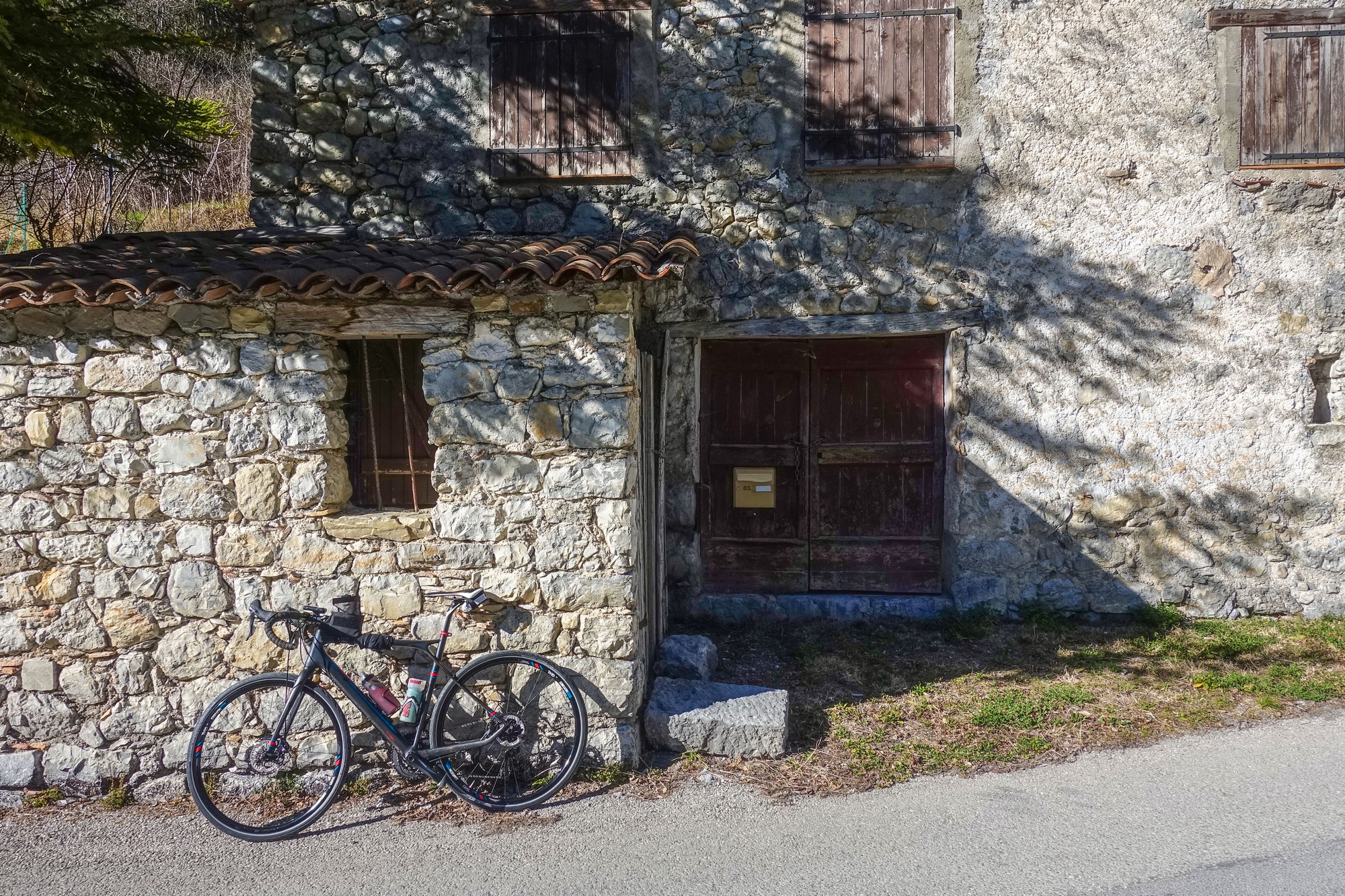 The first part of the climb on tarmac was very tough for me, but I have no way of knowing if it actually was tough or because I’m so out of condition. So I was grateful for the 36-tooth cog on the back. The only things missing are my companions, the grasshoppers and lizards (although there were a few butterflies), but then it is February. When I reached the village of Puget Rostang, I got a bit lost and couldn’t see where my Garmin wanted me to go. Luckily, a local was just getting into his car, so I asked him where the road was. He said to go back down to the crossroads and do a right. I had my suspicions that he was talking about a proper road and not the gravel track that I had planned to ride on. After thanking him for his advice, I went back down towards the village and then up a gravel track. As soon as I turned up to the gravel track I could hear a car behind me, beeping. It was the man I had spoken to. I assumed he wasn’t beeping for good luck but more like ‘you’re on the wrong road’. I approached his car. Further discussion established that he wouldn’t recommend that I go up there because it’s very steep and there’s no tarmac. I assured him it was the way I wanted to go. I thanked him again and set off. 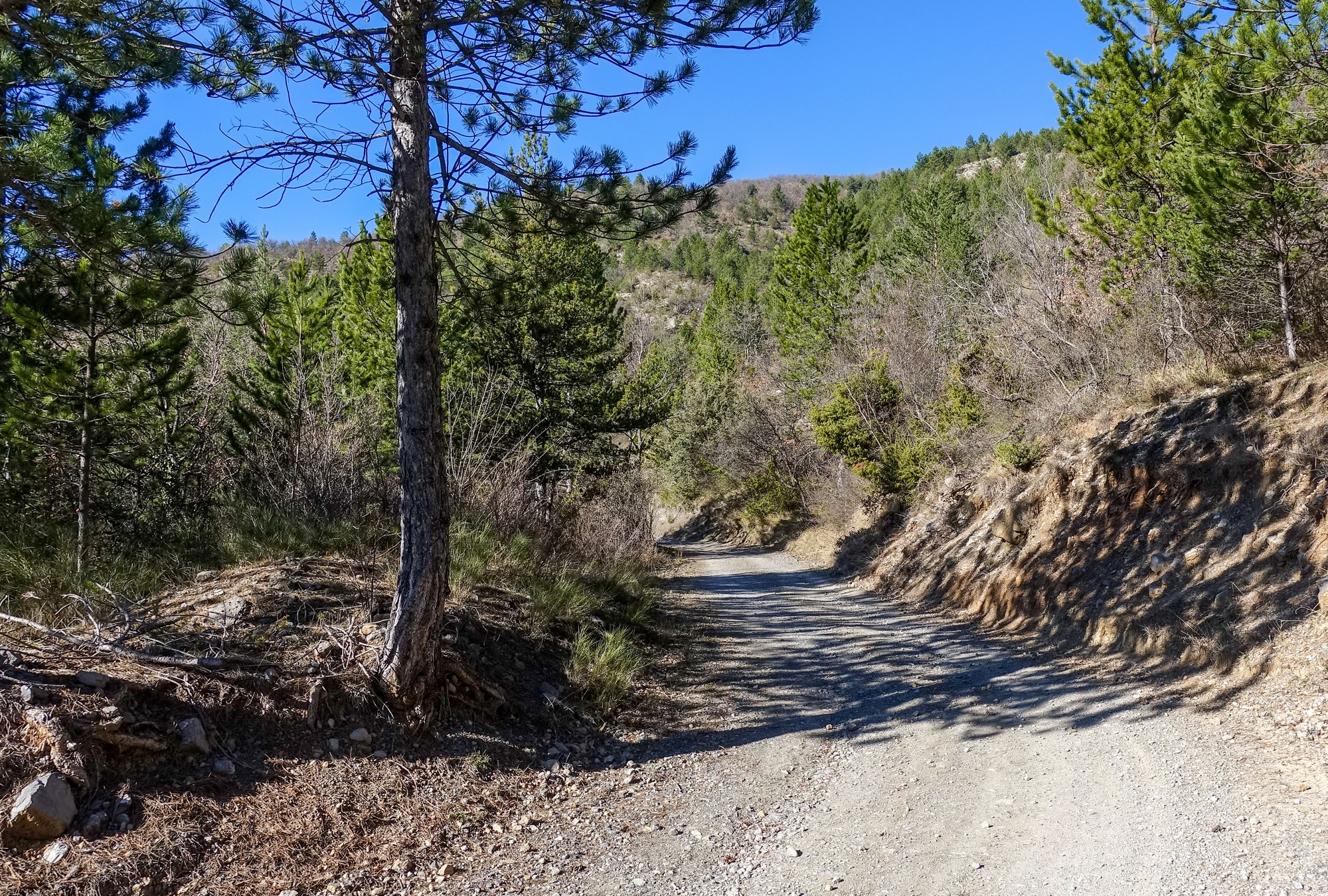 It started off ridiculously steep – the gravel itself was not a problem but the gradient was. I was turning slowly in that 36t cog. I know that the climbing on this ride ends before the midway point, somewhere around 7 or 8 miles, so I’m just looking to see that come up on the Garmin then I’ll know it’s all downhill from there. I am in completely uncharted (for me) territory now and there’s hardly likely to be any motorised vehicles on this road. It’s very peaceful. 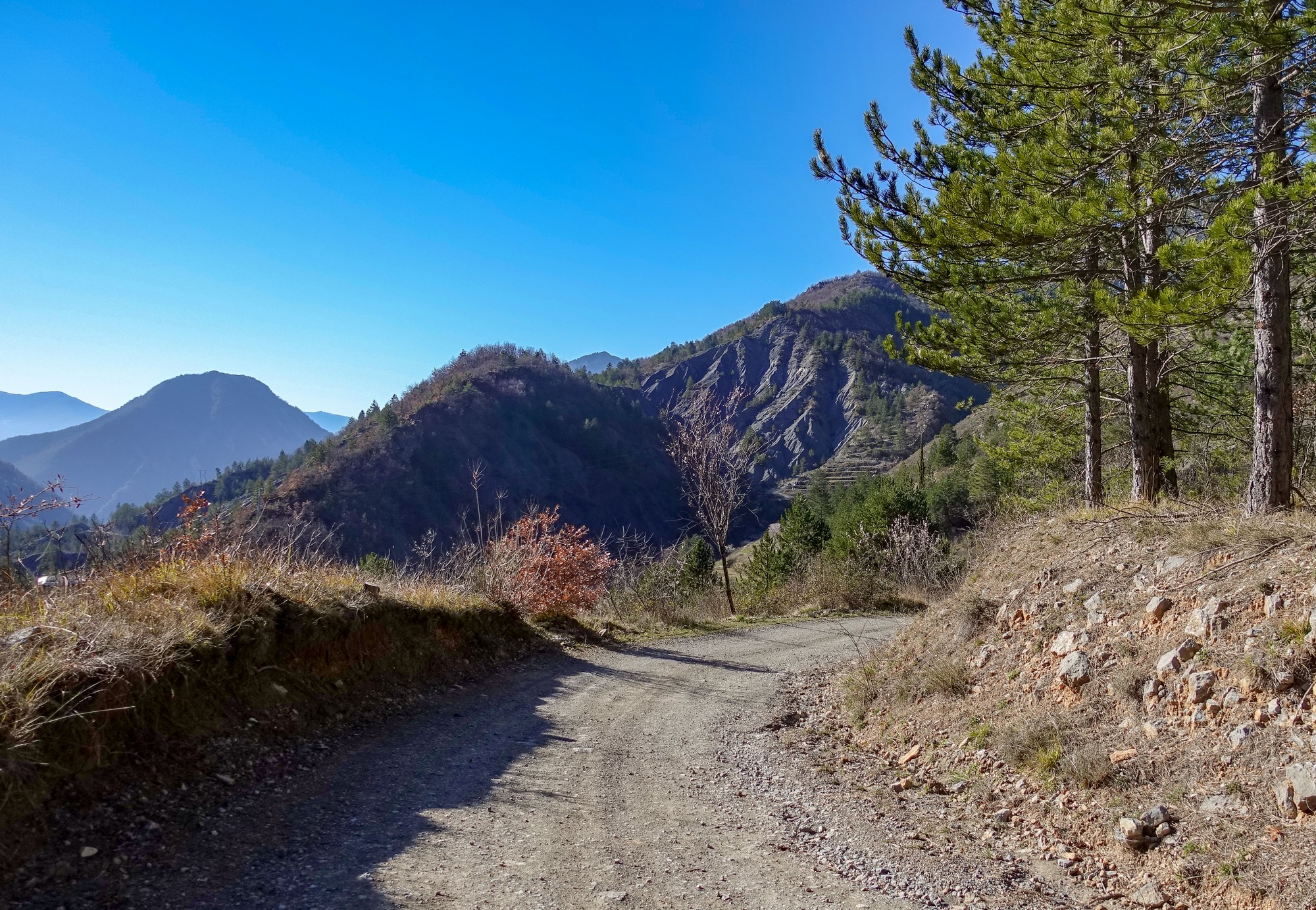 With the sun blazing down, I’m going to have the marmalade sandwich that’s squashed in my back pocket. 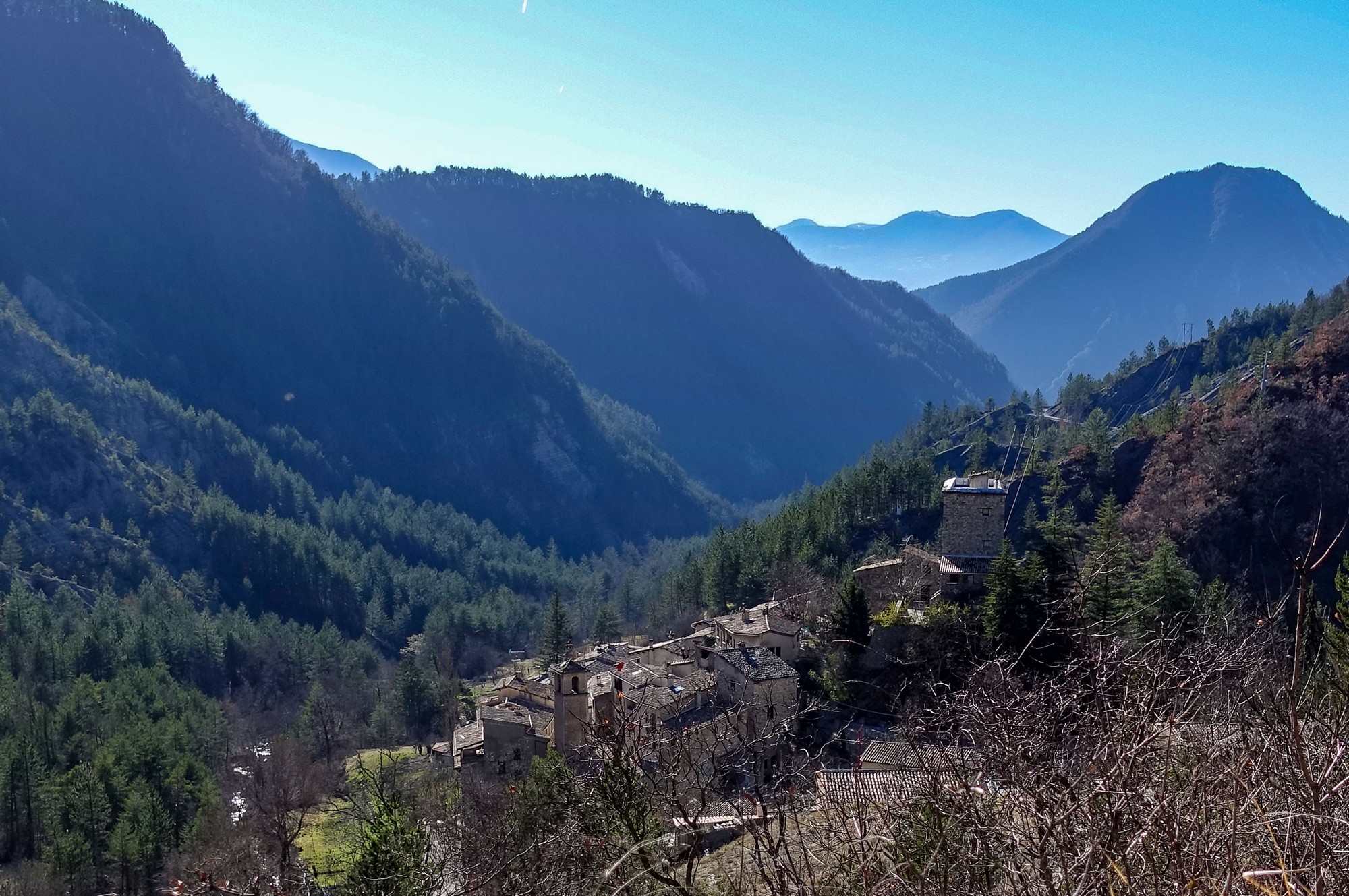 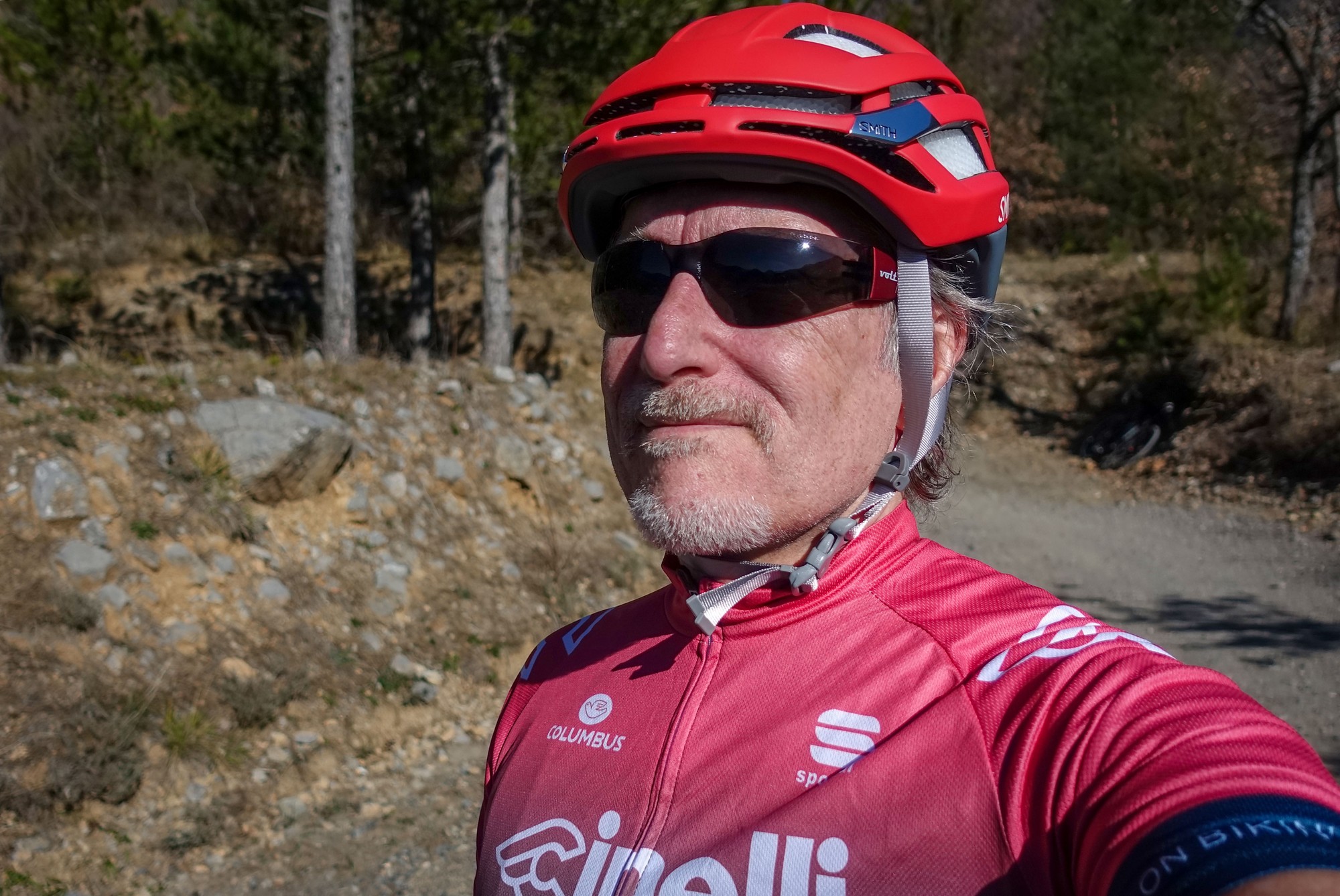 Next report from back at start: The gravel, or should I say rocky, path carried on, and at a punishing incline. I cycled most of it and walked bits of it. Sometimes it was impossible to get back on the bike because of the steepness and the stony surface.

I carried on for a while, hoping for it to ease but it was just as steep around each bend. I was finding it tough. What a ridiculous route to pick after 4 months off the bike! I looked at my Garmin to check the route ahead, and saw that there were hairpin bends for the next mile or so. 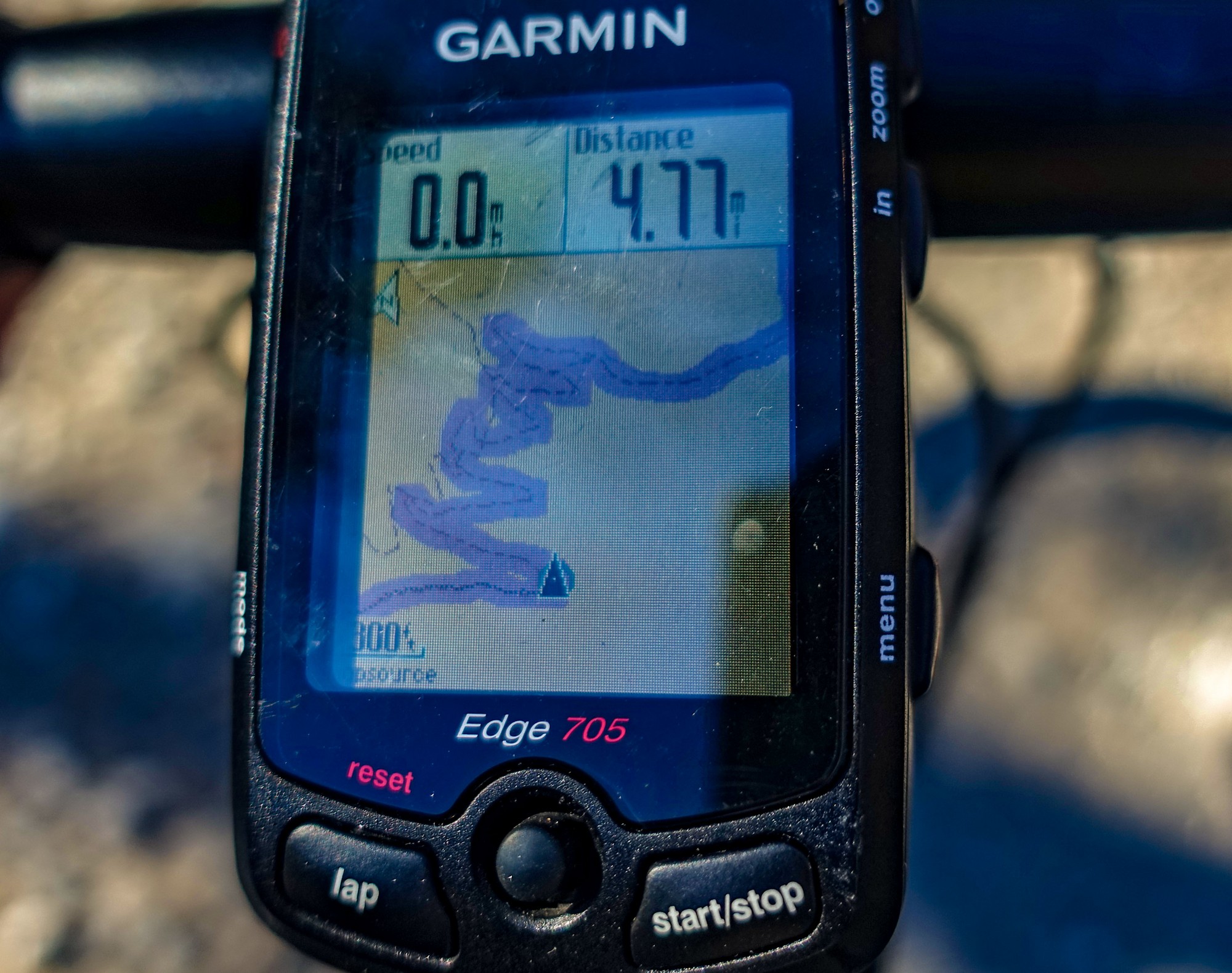 No, that would be too tough. There would probably be more walking to do and I definitely had the wrong shoes on for that. I also considered how the light might fade if I were to make very slow progress. It is February after all. Days are not that long.

So I turned round and then had a hair-raising descent on the gravel path. I had to be on the brakes the whole time going very slowly indeed, weaving about the rutted, rock-strewn path. 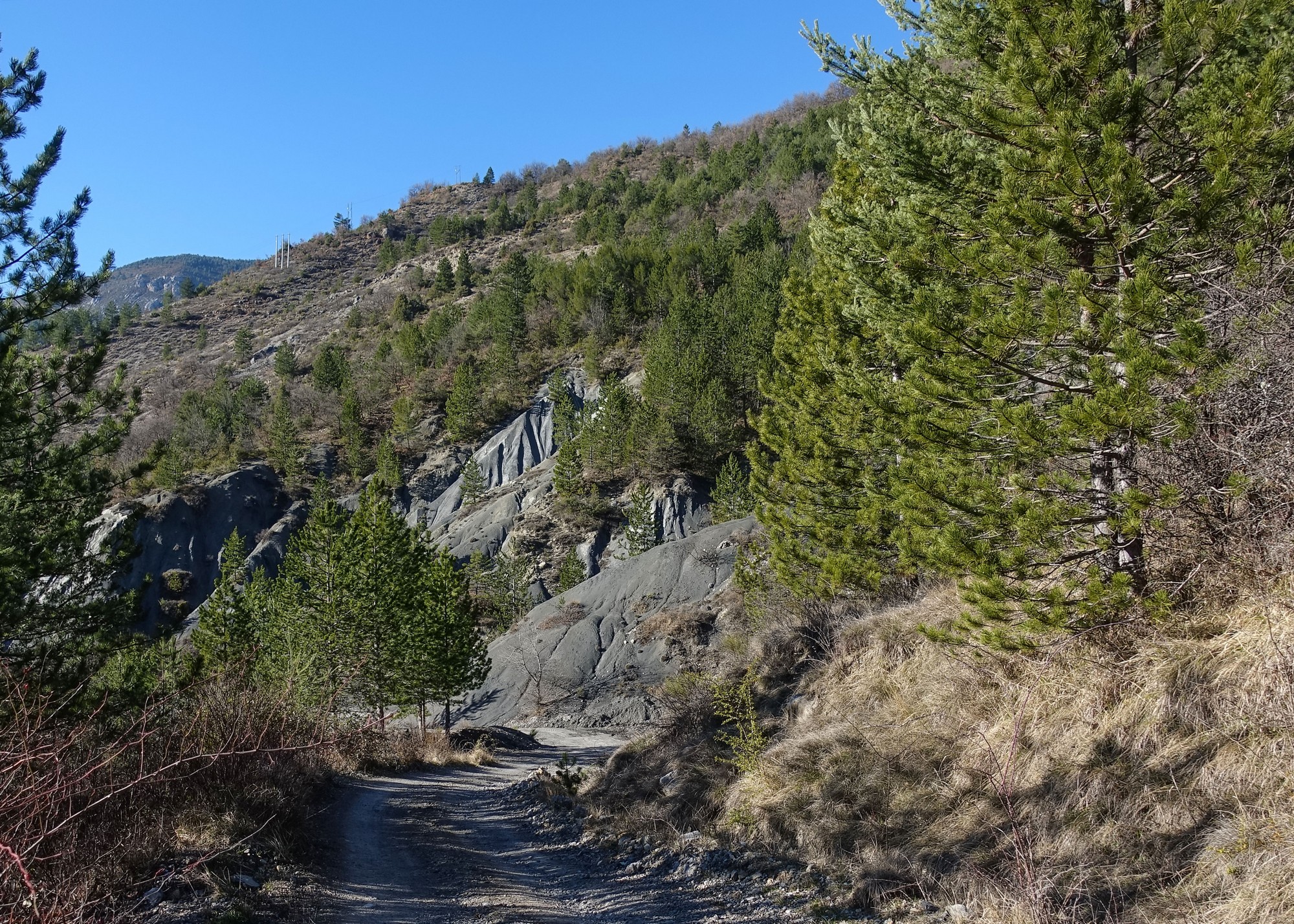 The front brake was diabolically noisy, screeching loudly across the valley, destroying the peace of the afternoon. Luckily the rear brake hardly squeaked at all so I used that as much as possible, and in the end managed to get down to the village relatively quietly. Once back on the road I realised that the brakes didn’t squeal at high speed, so that was a relief. I also realised how steep a climb it must have been on the way up. I enjoyed the rest of the descent on the road, but now that the sun had gone behind the mountains, the air was quite cool. The bike was very well-mannered on the high-speed twisty descent back into Puget-Théniers and back to base.

I learned loads on this ride and it was a success in many ways, despite having to cut it short.

So the next job to do is to change those brake pads and stop the horrendous noise. 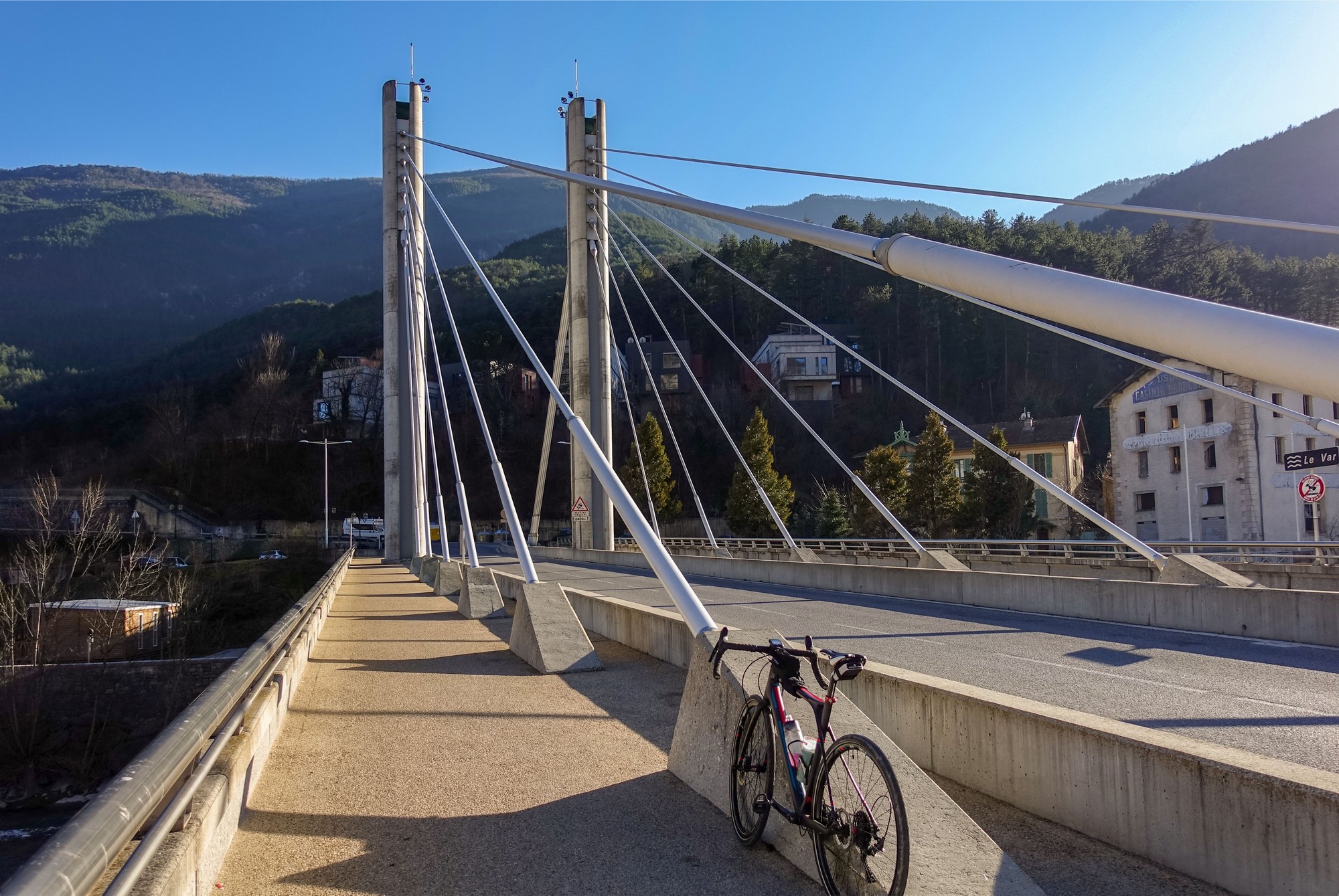 That was a very tough ride for me considering I haven’t been on a bike since mid October. But what a gorgeous day, and location. It was a good test of the new bike, and I think this could be the start of a beautiful relationship ..

To be honest, the bike comes second. I wouldn’t care what bike I had so long as I could ride around this region of the world. It’s not ‘all about the bike’, it’s ‘all about the location’. 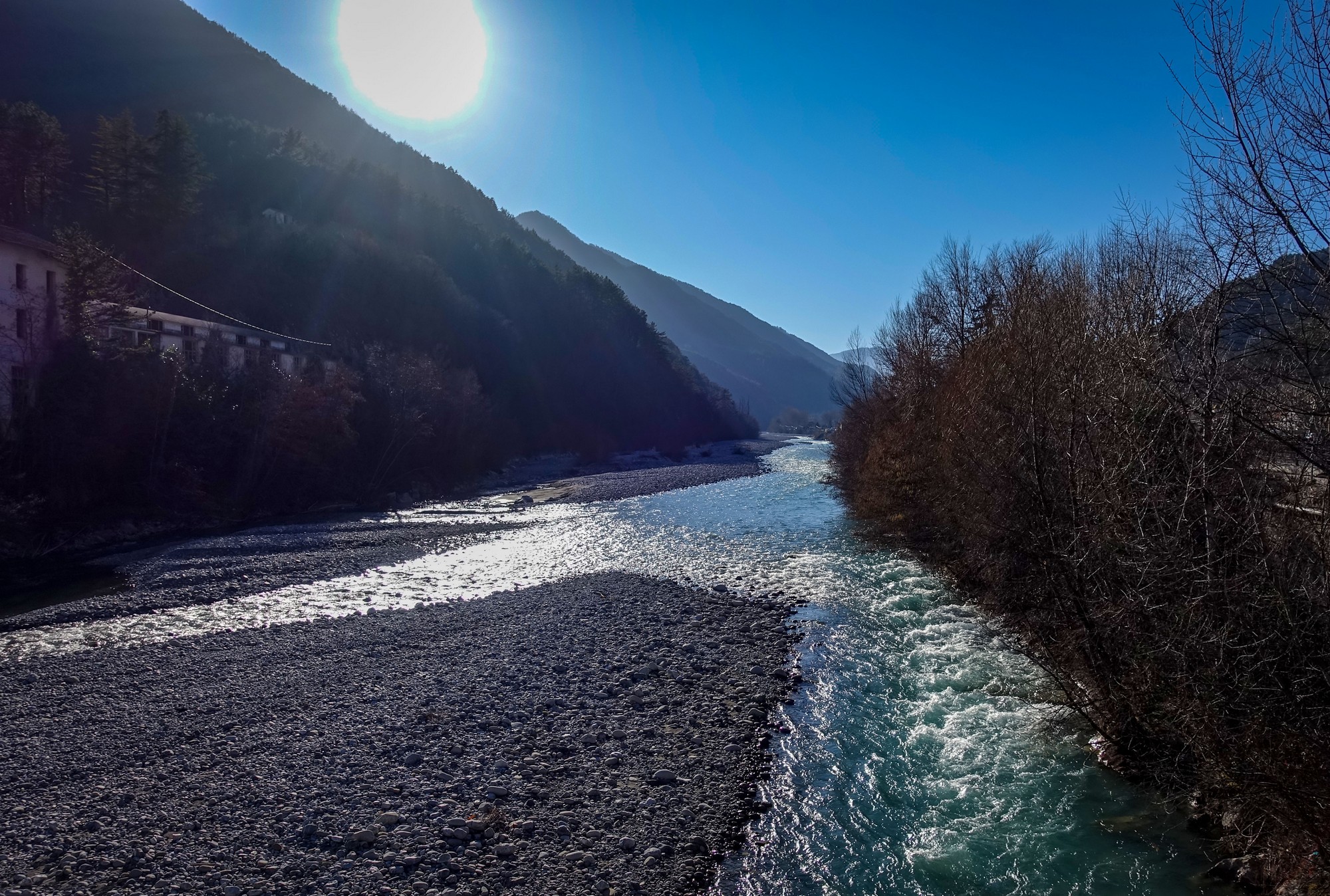