For a long time I have been planning to fill-in the missing section of the Kent coastline along which I had never ridden, namely the North-East bit around Ramsgate and Margate. Today that plan was realised. I created a route to Hythe and Folkestone based on my old work-commute route from 2016. From there it was eastwards along the coast to Deal using a reverse section of last week’s ride. After that it was unknown territory. I routed through Sandwich, Ramsgate and Margate using quite a few cycle paths, and then back to more familiar territory at Whitstable.

In keeping with the current heatwave we have been experiencing, the forecast was for a very hot day of anything up to 32°C, with a light WSW’erly.

I set off at 08:15, at which time the air was cool (but warm enough for short sleeves) and with a certain amount of cloud cover, which I was pleased about – there’s no way I wanted to be out in the blazing sun all day long. Before leaving, I quickly googled to see if there were any cash machines on my route. There was one at a petrol station in Hythe apparently.

The route to Hythe is a pleasant one with fast, fairly quiet roads. I got there at 16.1 mph, not quite as fast as I used to do it when I commuted there in 2016. 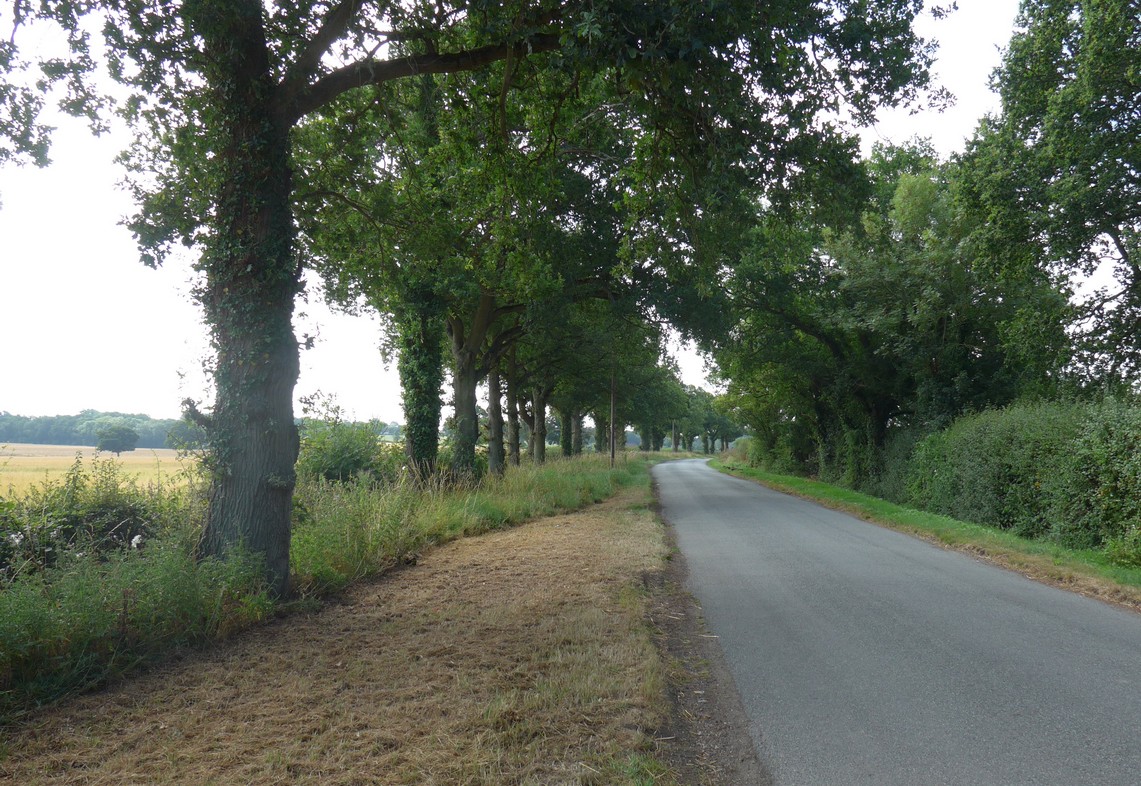 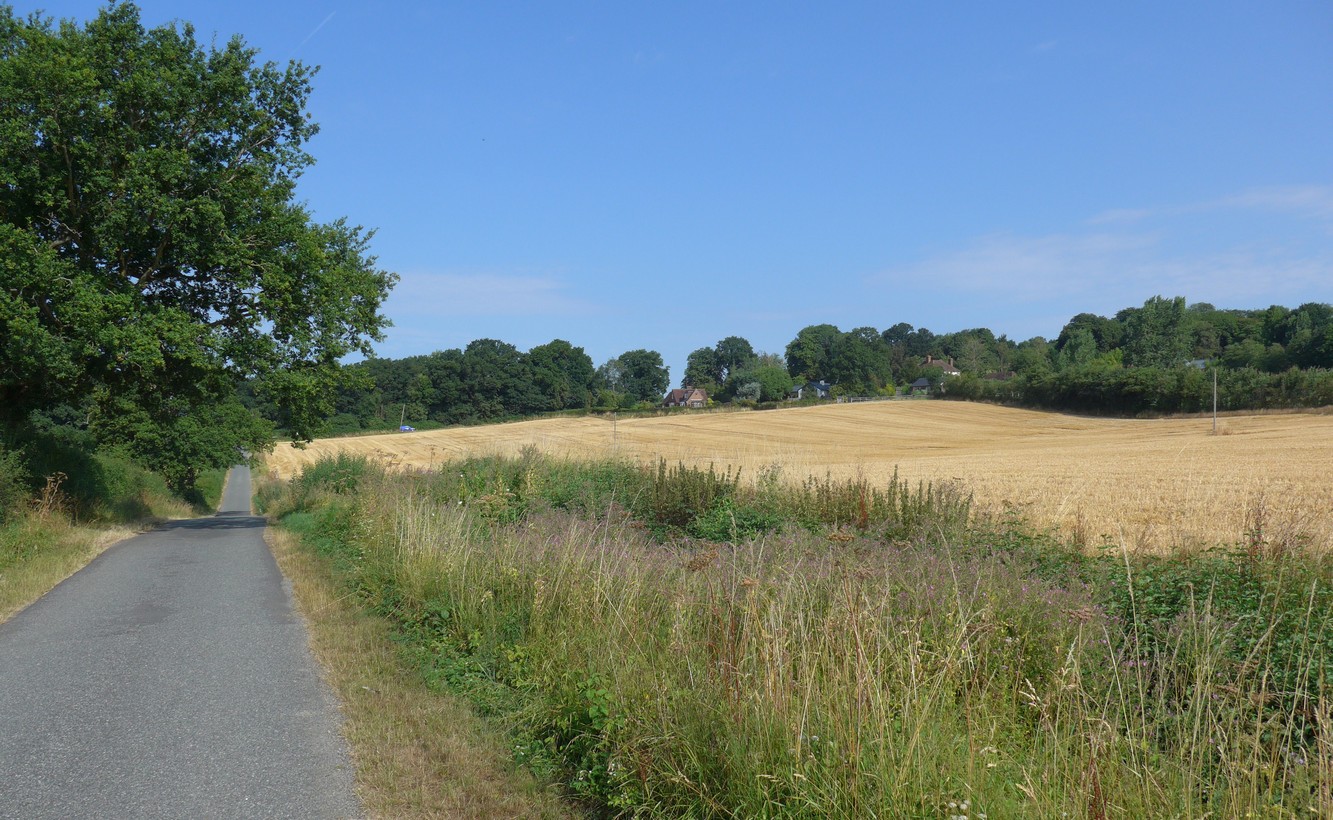 On the way through Aldington village I spotted a Post Office – aha! I was able to get my cash out there. I always forget about Post Offices. The road from Aldington through Lypne to Hythe rides long the elevated edge of Romney Marsh and there were several great views over the Marsh to my right. At one point, through a gap in the trees I saw my familiar landmark of Dungeness power station, way off in the distance. 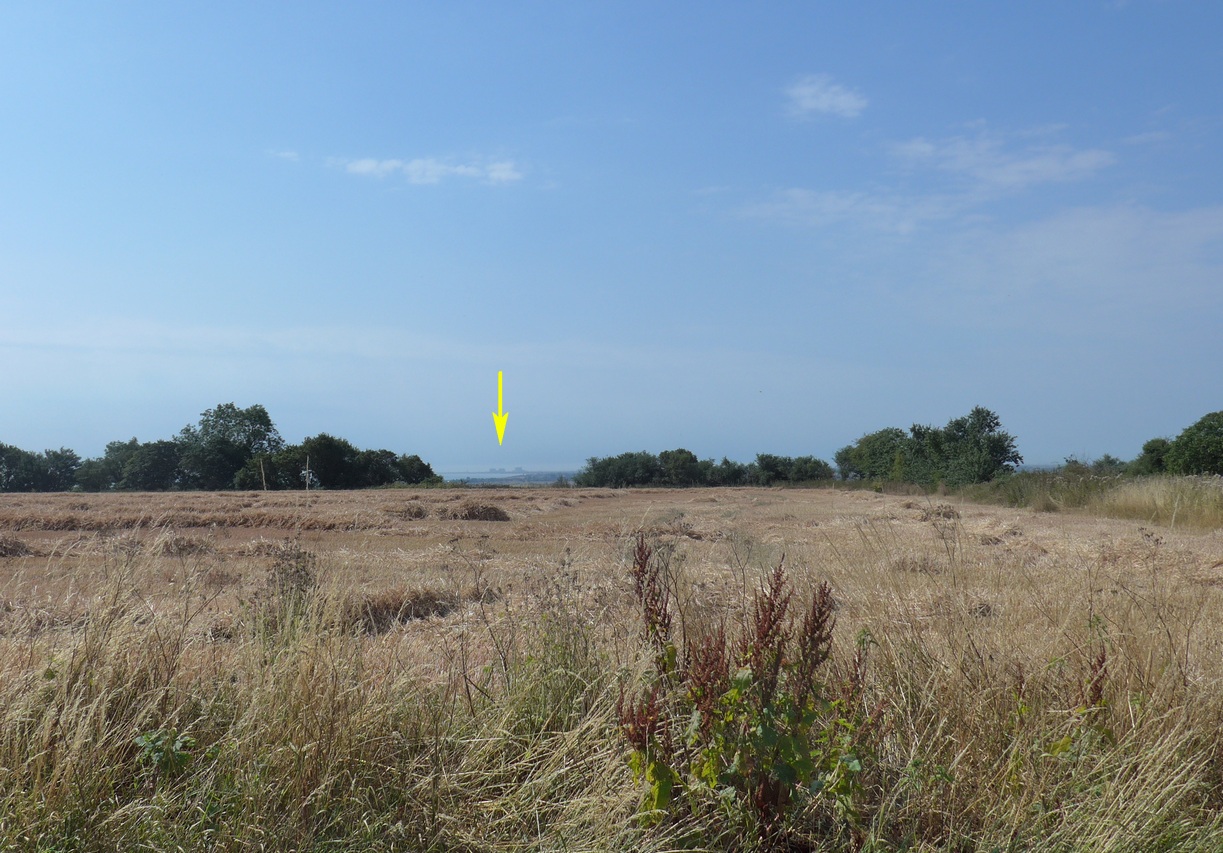 Once I reached Hythe, I sat on a bench next to the Royal Military Canal and had some of the food I’d bought with me. 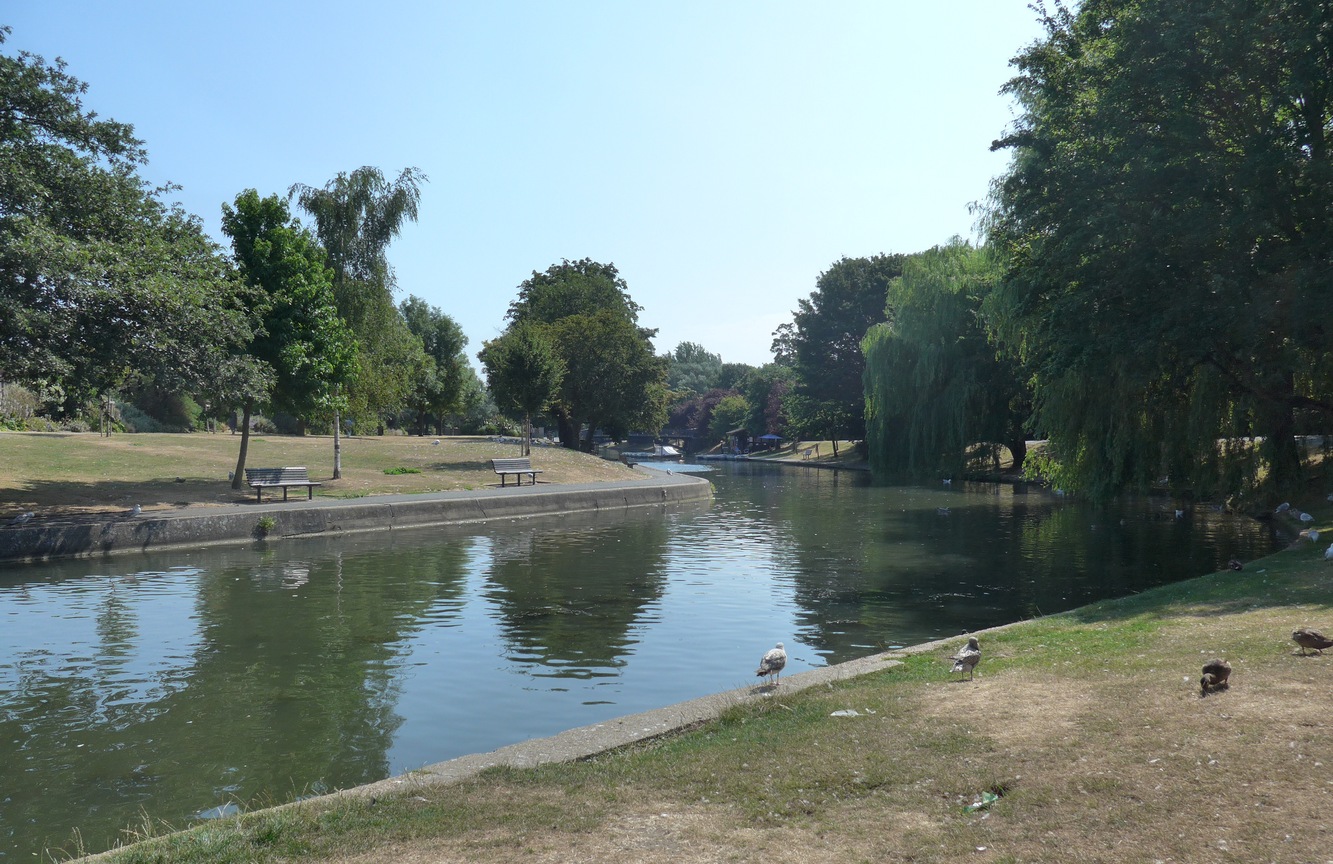 Then it was on to Princes Parade. By now there were clear blue skies and a blazing sun. 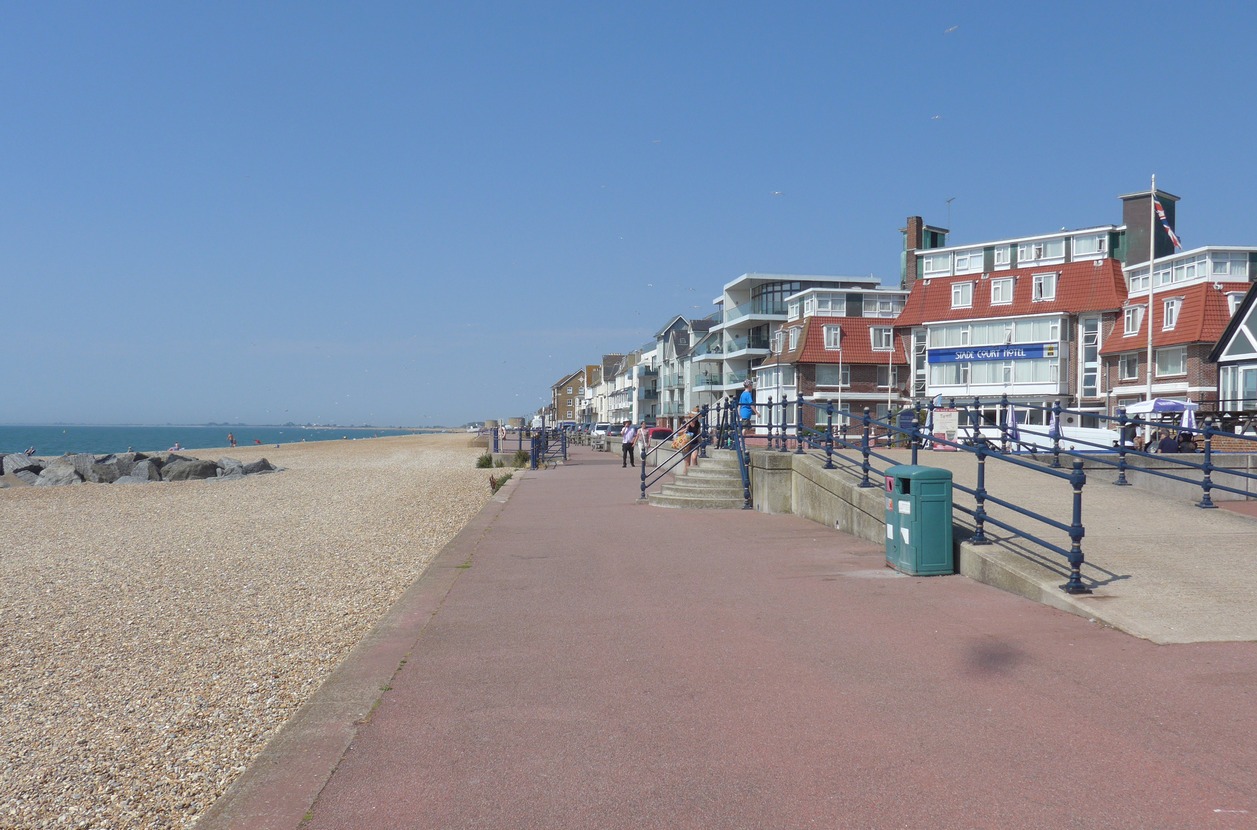 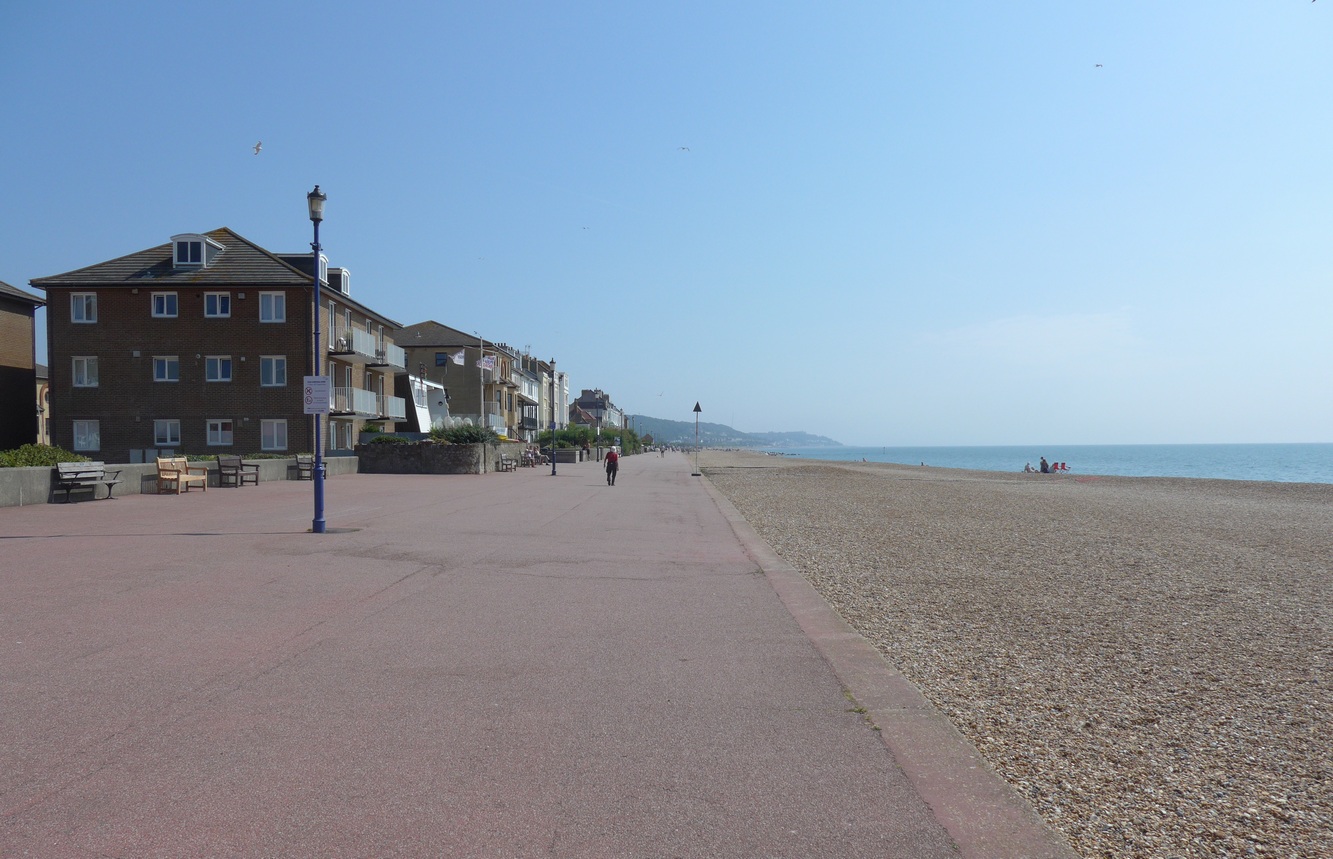 With the gentle breeze behind me it was effortless to cycle along the seafront promenade all the way through Sandgate to Folkestone. There are lots of large old attractive buildings in Folkestone. 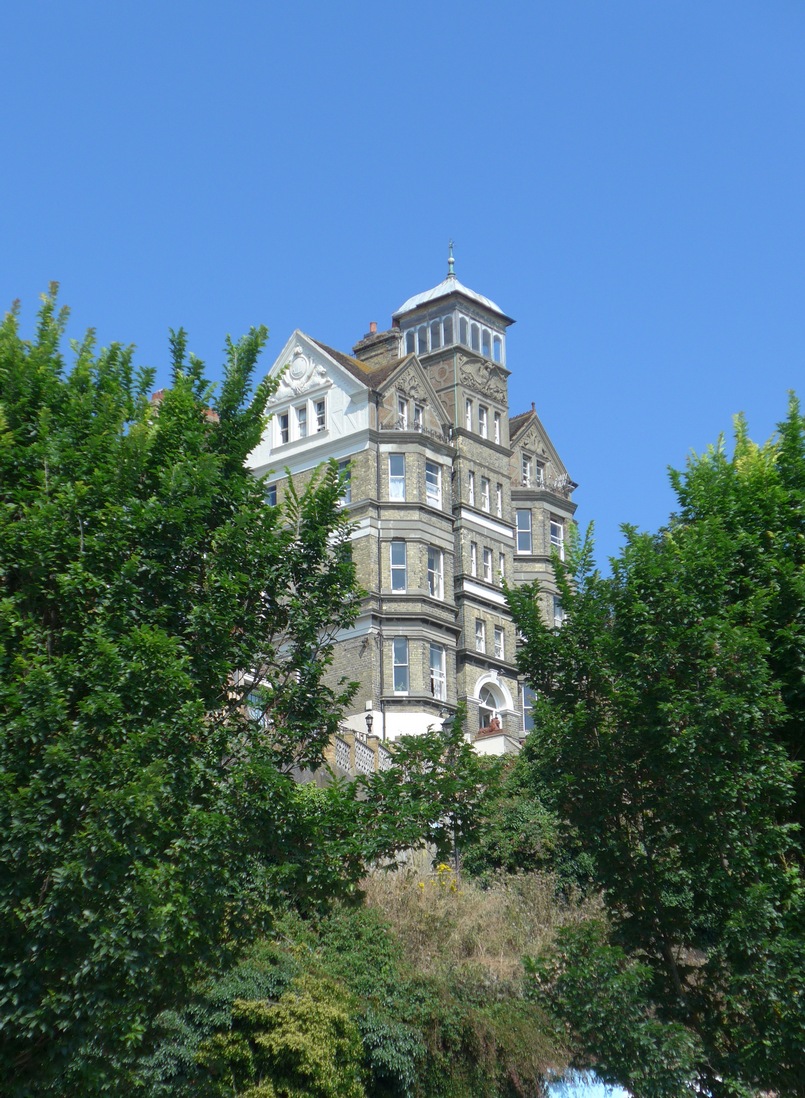 I climbed out of Folkestone up the long and winding 10% Dover Hill. At the top I was then rewarded with a fast 5 miles of downhill to Dover. Out of Dover I tried to find a less-steep alternative to Castle Hill and went up Connaught Road, but peaking at about 13% towards the end, I don’t think it was any less steep and had me out of the saddle for the last bit where it comes out right opposite the castle. From there I did a reverse of the new route I’d found last week, and travelled the quiet roads through  Guston, East Langton, Martin, Ringwould…. 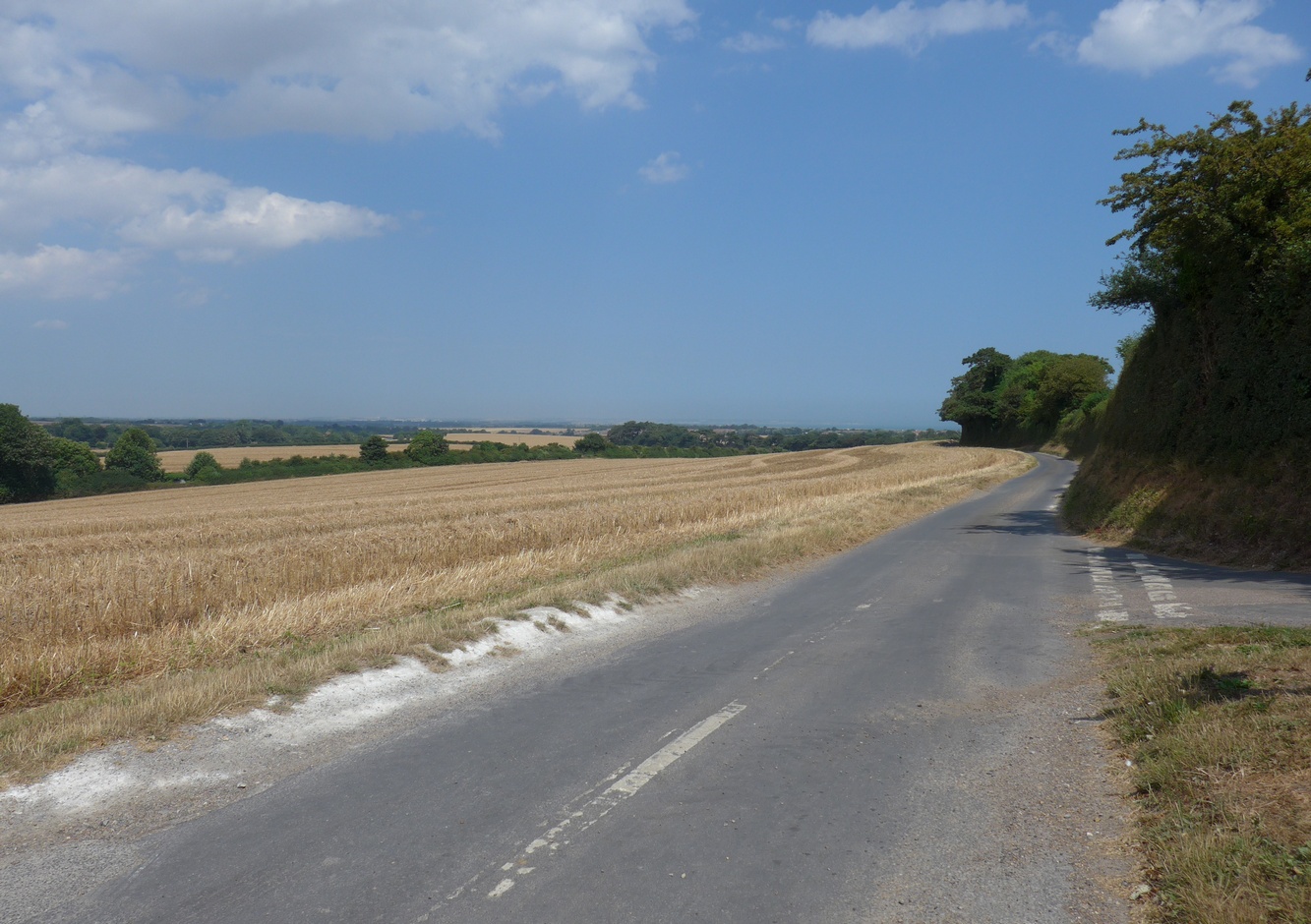 …. and back down to the sea at Kingsdown, from where it was an easy 2-mile ride along the shore to my favourite cafe, The Sea Cafe 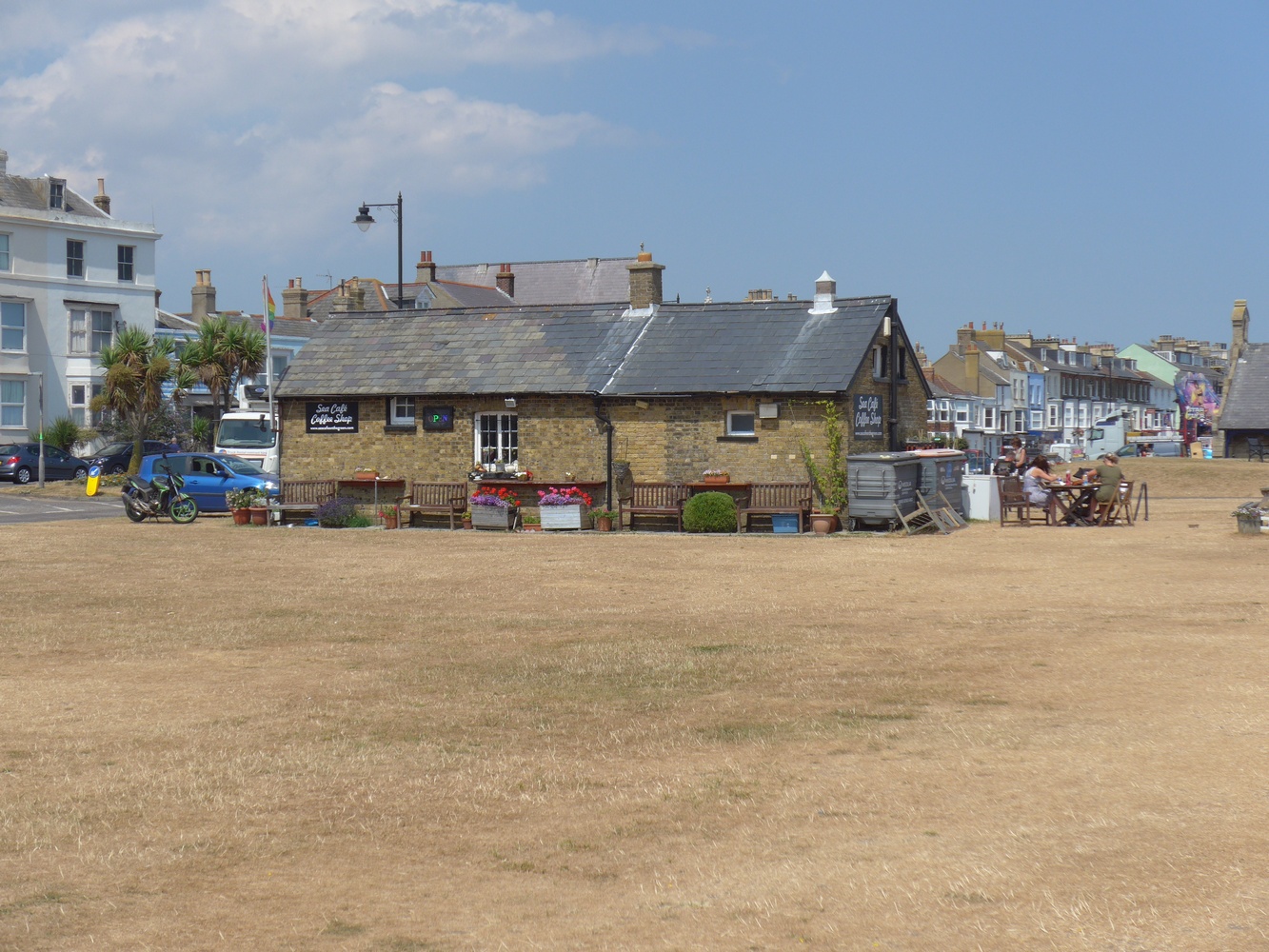 I had a fried egg on toast and a coffee. I’m nothing if not consistent! By this point I had covered 60 miles. This time I found out something very useful: there is an outside tap at the Sea Cafe – useful to know you can always top-up here.

I rode on – though Deal and on the very pleasant quiet winding road that passes through the nature reserve and Sandwich Bay Private Estate. Once through Sandwich I was into uncharted (by me) territory. Cycle paths beside the busy A256 lead to a new-looking but almost empty road into Ramsgate (Sandwich Road).

The road out of Ramsgate follows the shoreline on top of the cliffs and through a park at one point, all the way to Broadstairs, which was packed with people enjoying the warm sunshine. 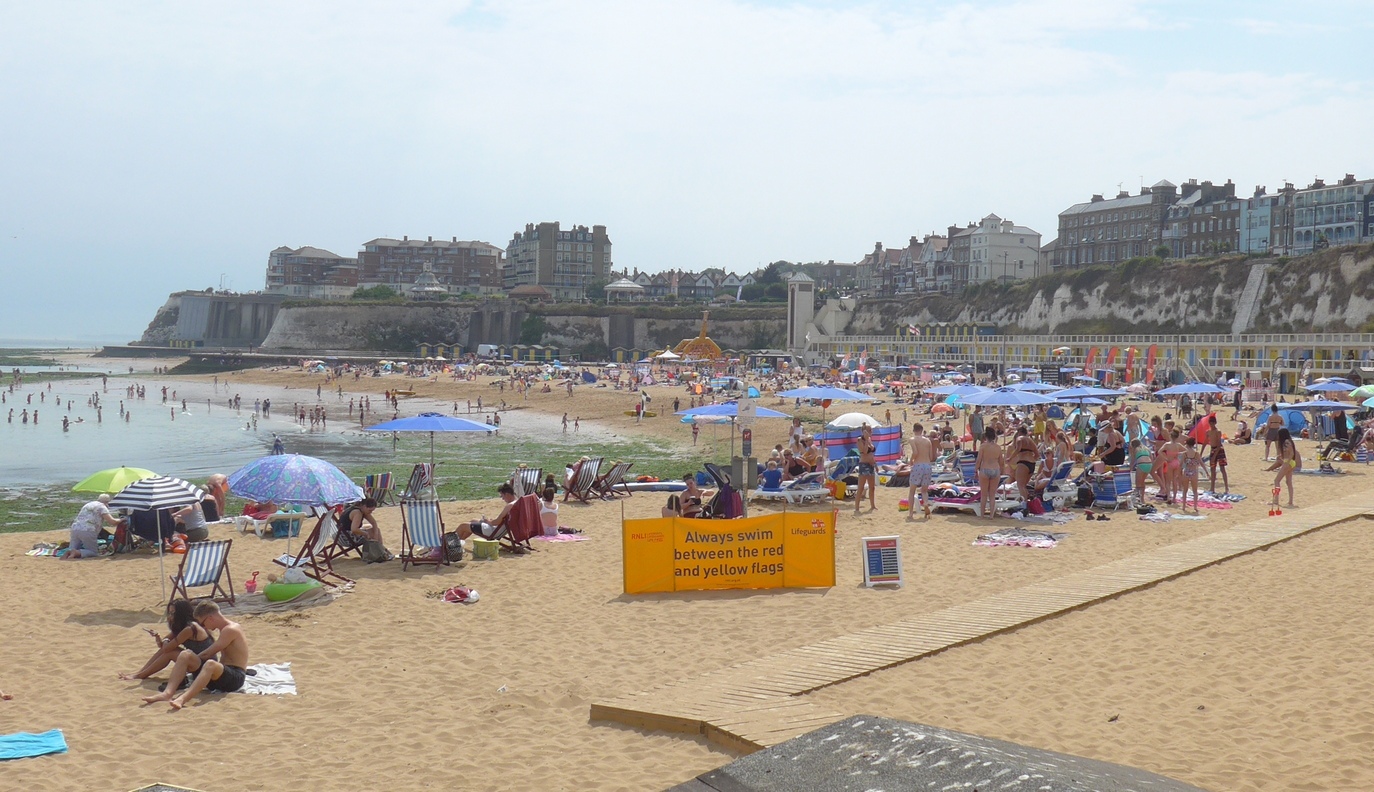 The route north of Broadstairs again follows the cliff edge, some of it road, some cycle path. It passes through Stone Bay, Joss Bay, Stonegate Bay and Botany Bay on its route to Margate. Around the North-east tip, the shared promenade known as Prince’s Walk is really wide and comfortable to cycle on as it passes Palm Bay and then onto Walpole Bay where it’s then known as Queen’s Promenade.

Margate was heaving as I cycled along Marine Drive. It was fairly cloudy for the next couple of hours, bringing some welcome relief from the sun. From Margate I rode on an ugly concrete sea wall that was quite uncomfortable to ride on due to the expansion gaps every couple of metres. It wound around as the coast looped in and out of Westbrook Bay, St. Mildred’s Bay, Westgate Bay and Epple Bay

From this point onwards the cycle path becomes more uncomfotable to ride on with several bits that have a huge lump every couple of metres. Eventually I got to Reculver Towers

Eight and a half miles more of uncomfortable cycle path led me to Tankerton where I promised myself a Twister, but the cafe where I normally get one was closed. I rode on to the next cafe which was also about to close, but stayed open long enough to serve me. 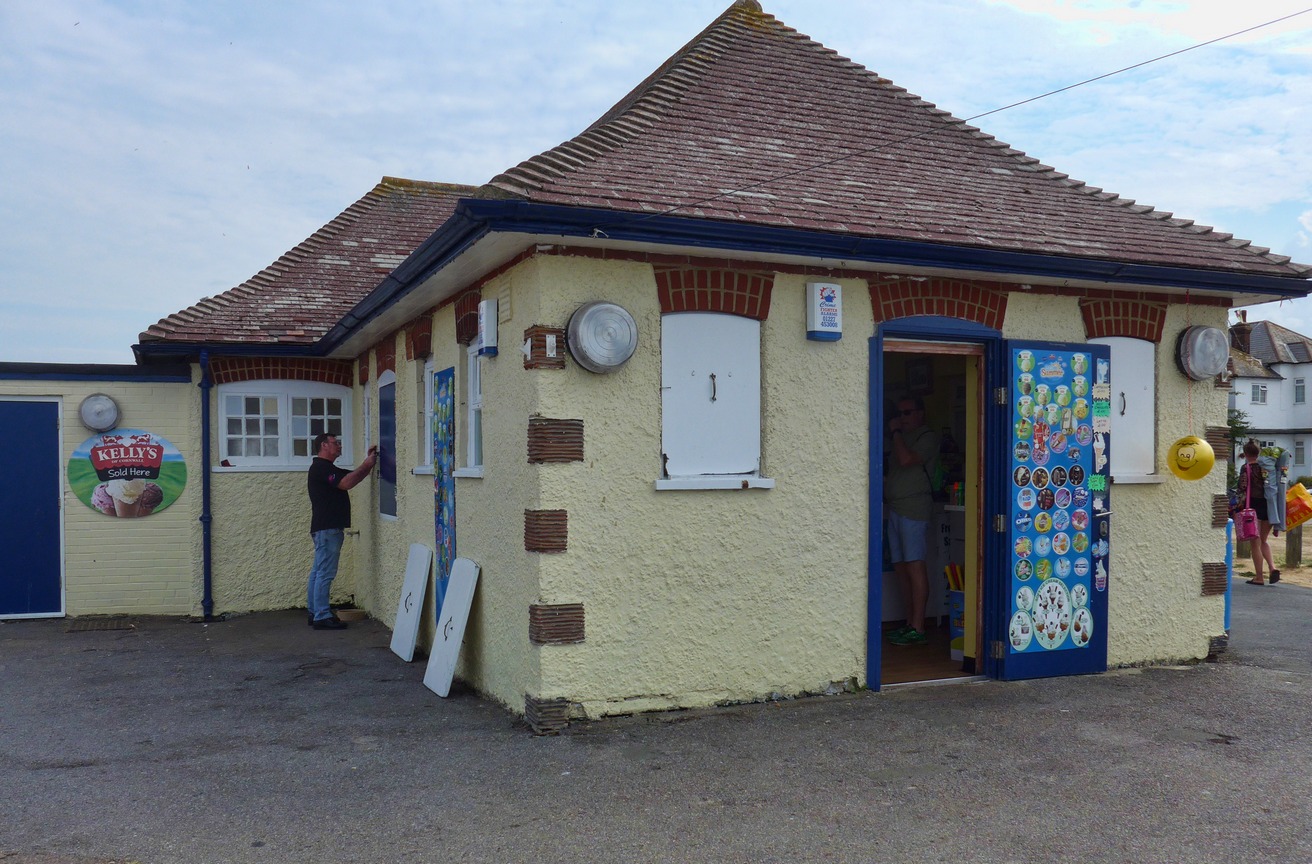 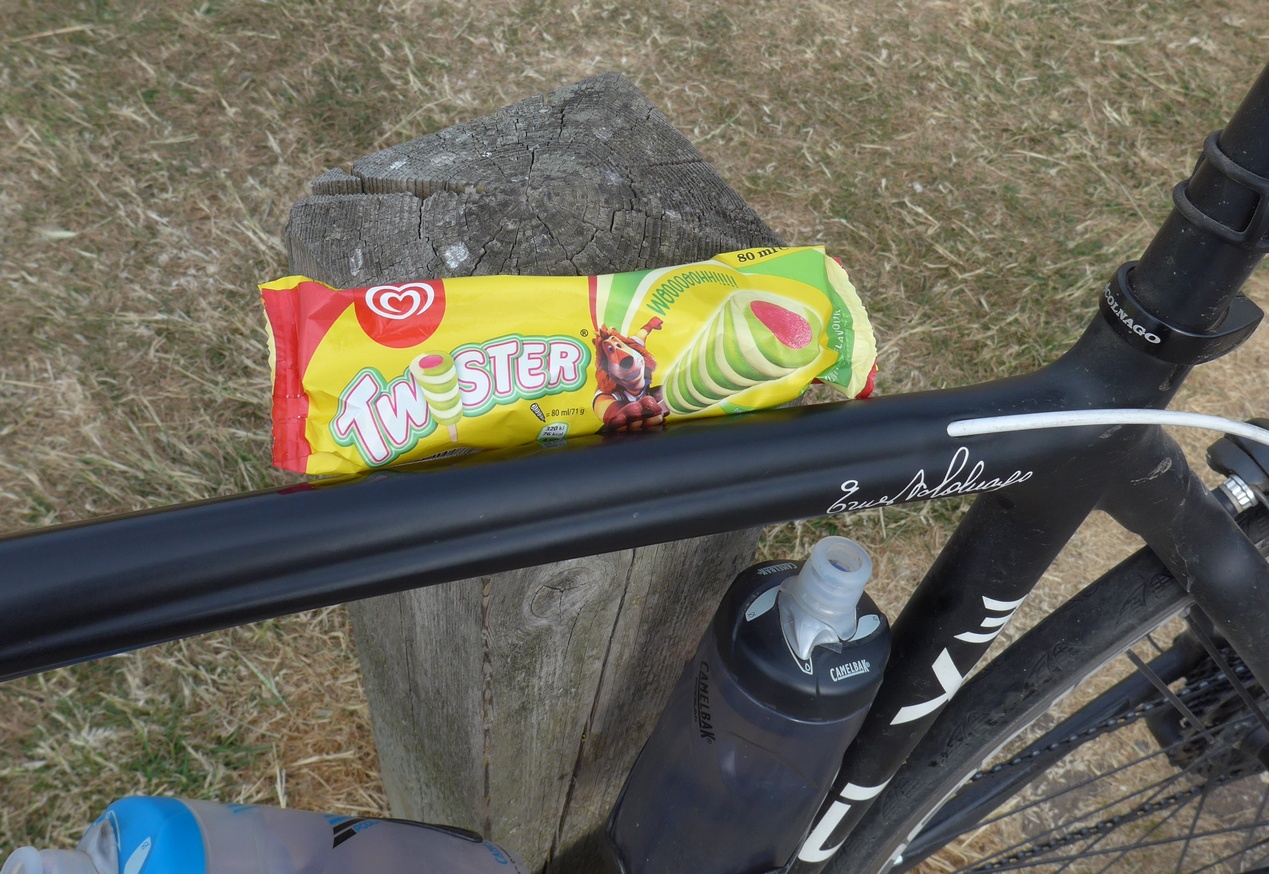 And I found out that this cafe too has an outside tap – useful!

I looked at my Garmin and saw that I had 30-odd miles to go. But now it was into the wind for the nine miles to Faversham. Somehow I had managed to accidentally include a noisy 2-mile stretch along the busy A2, instead of going through Faversham. Eventually though I reached my turn-off, in the shape of Faversham Road. 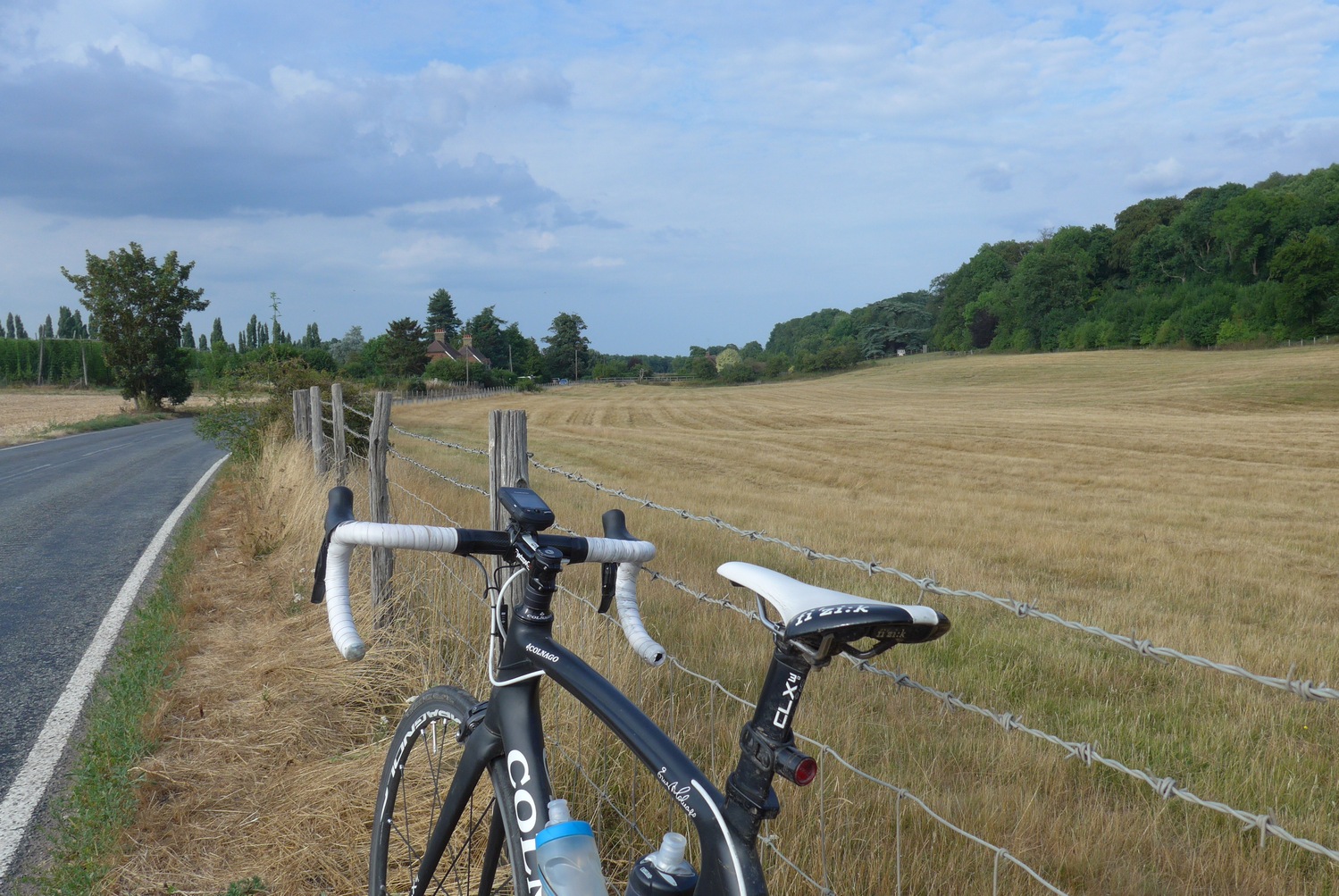 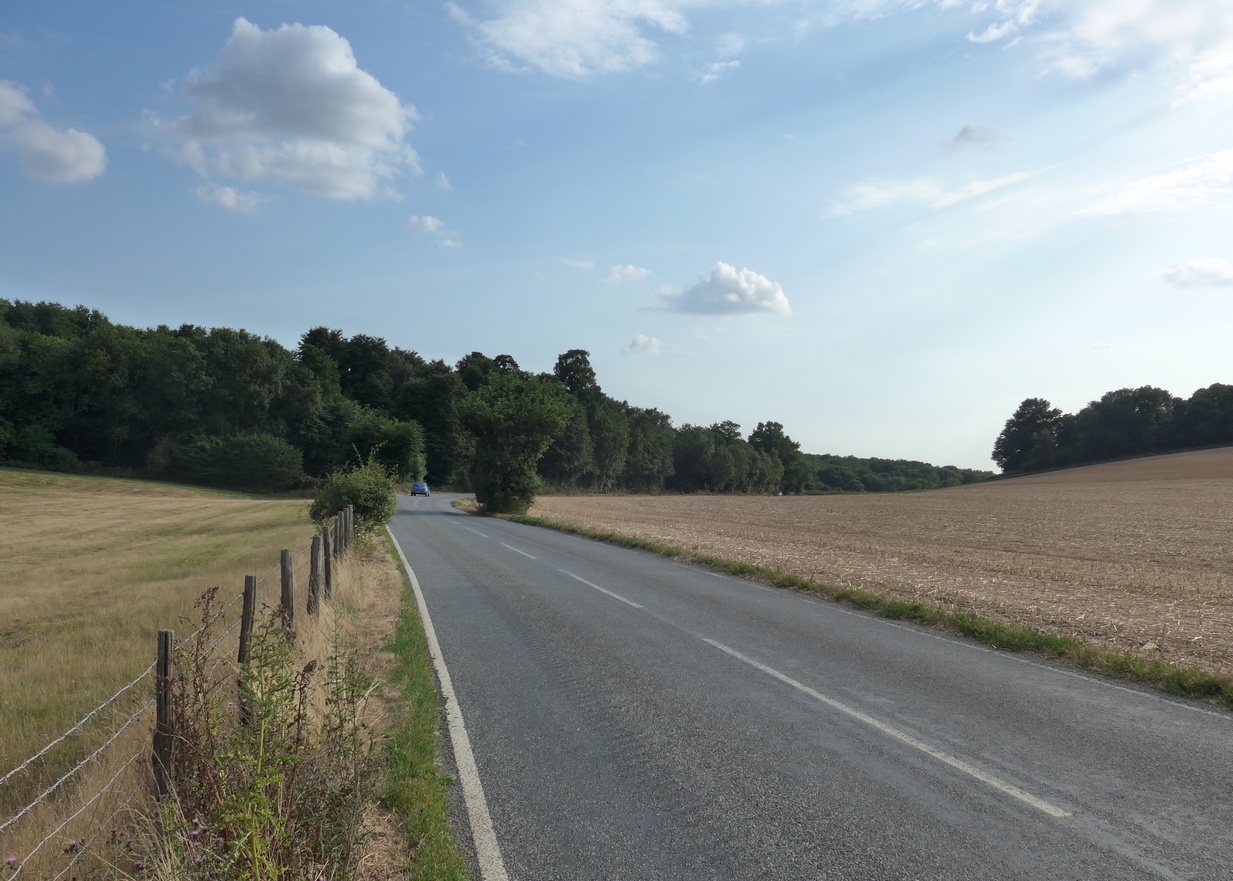 From this point on it was mainly sunny and got warmer as I rode inland. Pouring water over my head helped. The next eight miles were uphill; a gradual gradient but nonetheless energy-sapping. I scoffed some fig rolls and an energy gel. I found the slog easier than I expected but was still immensely relieved to reach the top for the steep descent into Lenham where I had promised myself a Tango to help with the remaining 12 miles home. The shop had sold out of Tango so I had a Lucozade Orange and poured it into my bidon.

When I got home at 7:30 pm, it was still 30°C. I couldn’t stop drinking. Even after drinking and eating loads after getting back, I found out that I was 4lb lighter than when I started this morning!

By the time I got home I was cursing the road and cyclepath surfaces. The simple fact is that most of the roads and cyclepaths in this country (or at least this part of it) are crap! They really take the enjoyment out of the whole experience. In France earlier this year it was sheer pleasure to ride on beautifully tarmac’d cycle paths and roads.

Use Post Offices for cash
More likely to find a post office rather than a cash machine in Kent villages
Sea Cafe ‘now takes card payments’
Could be useful if no Post Offices available
Outside water taps
There are taps at Sea Cafe and at Tankerton Ice Cream Parlour
Take bike lock
A couple of times today it would have been useful to have my lightweight lock just for when my bike was momentarily out of sight.

5 Replies to “Completing the Jigsaw”