I decided once again to not get bogged down by the weather forecast. There were clouds around with sunny spells.

I planned this route back in the UK and it was designed to be done from Autrans. When I spoke to to Augustin the other day he suggested the route as well, and said it’s better to go one way round than the other, but I can’t remember which way round he recommended. Anyway I thought I’d do it starting from here in Lans-en-Vercors as it is only 3 miles to the start of the route, so would add about 6 miles on.

Climbing up towards col de la Croix Perrin, I was going quite well, feeling a newfound fitness over the past few days. But half way up I looked at my Garmin to see a blank screen. It had shut itself down. It hadn’t done that for couple of years I think. So I stopped and re-started the Garmin. It was a shame because I thought I might get a fairly decent time for the ascent to col de la Croix Perrin.

When I reached the col, that’s where the planned route started. It was a forest road. I was confident it would be fairly rideable because Augustin had confirmed that it was a road and not a track. The Google street car had not been there so I hadn’t been sure.

And so I was straight into the forest. 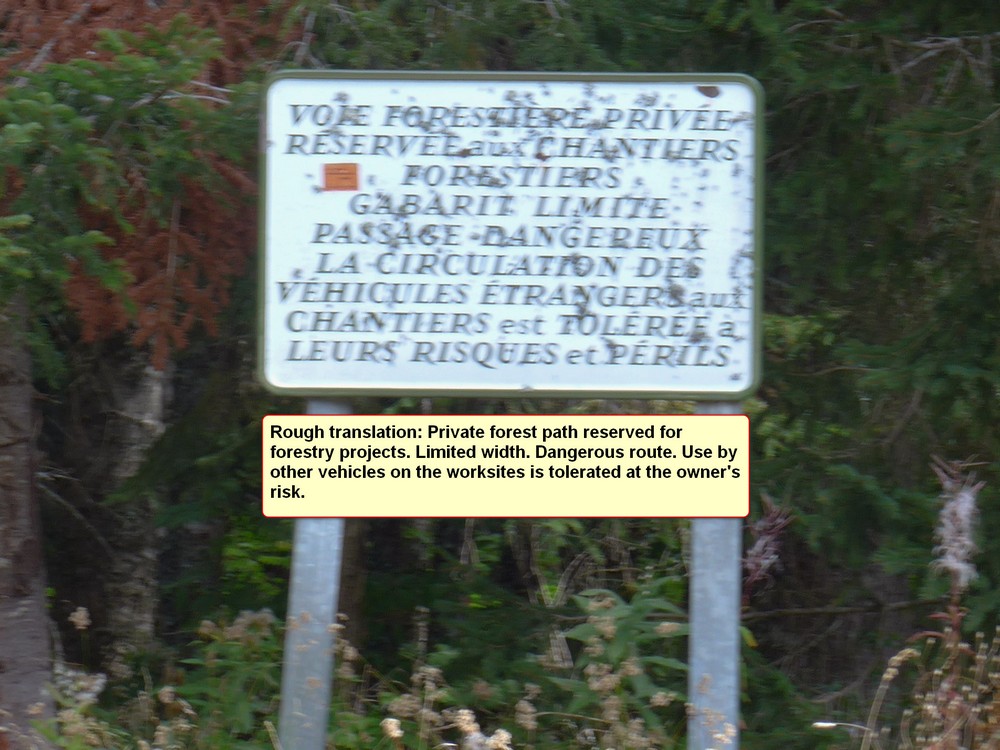 Cycling along, I was thinking that there will be hardly anything to put on the blog because this road is just like any other forest road, not very interesting. The road surface was pretty good, just the odd spot where there’s a few potholes and I had to weave between them, but the good news is that there was no traffic. After an initial bit of climbing the road was still going up but it was a very gradual very easy ride.

I could see through the trees how high up I was above the valley but there were no photo opportunities. Suddenly the view ahead became completely treeless as the road swung to the right. The reason there were no trees is because there was nothing for them to grow in, other than fresh air, because it was a sheer drop. 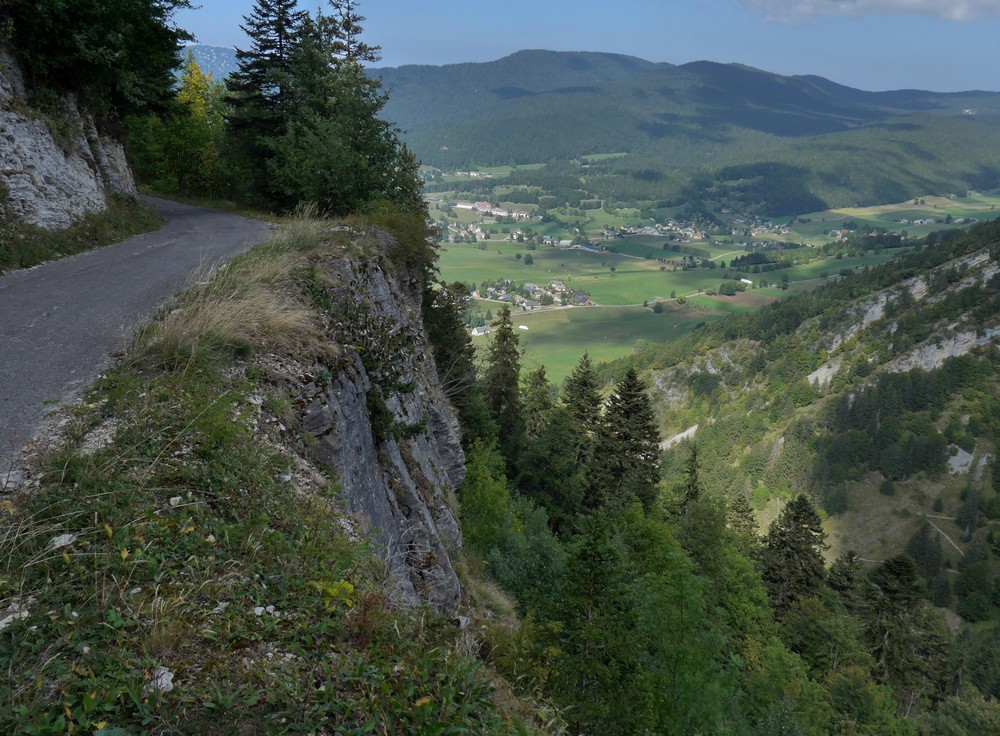 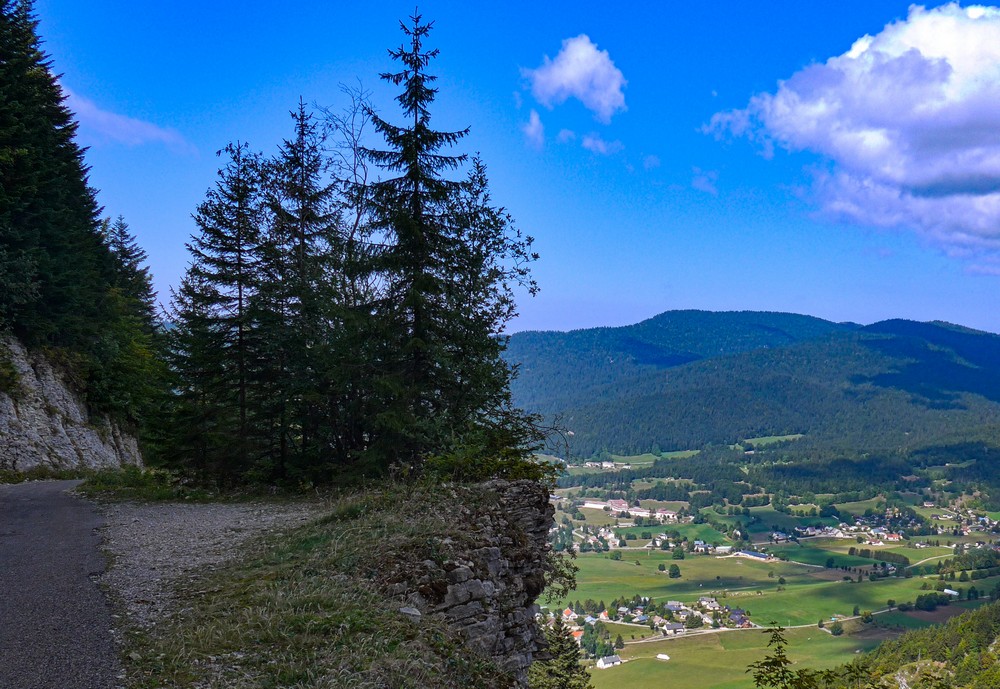 Just as I stopped to take a photo an elderly couple (ie more elderly than me!) on mountain bikes were coming past and the lady said something in French but I really didn’t catch a word of it. I just nodded politely. Hopefully it wasn’t warning of an impending catastrophe further up the road.

Every time I stopped on this road it was very peaceful.

The road swept around what felt like the rim of a huge ‘bowl’ in the side of the hill – it might be called a combe, I’m not sure. I could see a radio mast on the other side and assumed that the road led around to that. 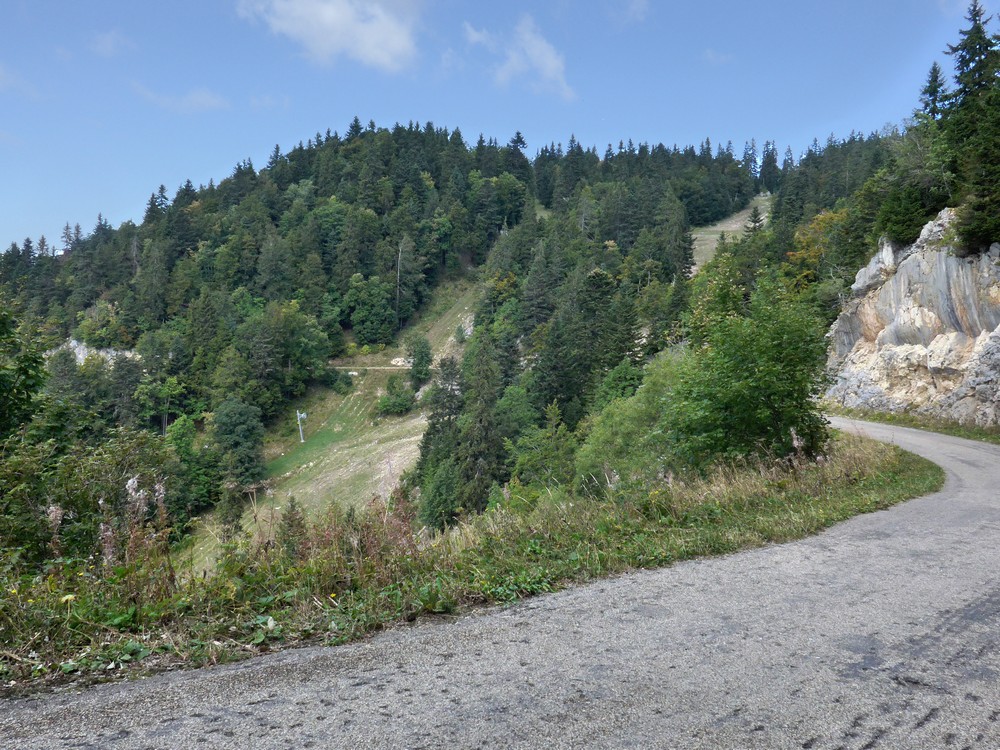 Part of the way round the bowl rim, the trees to the downhill side of the road had been cleared. This was so that it could be used as a launch pad for parapenteurs. There was a sign to this effect with loads of information and details of where to land in the village in the photo, and explaining that the facility had been provided out of goodwill. 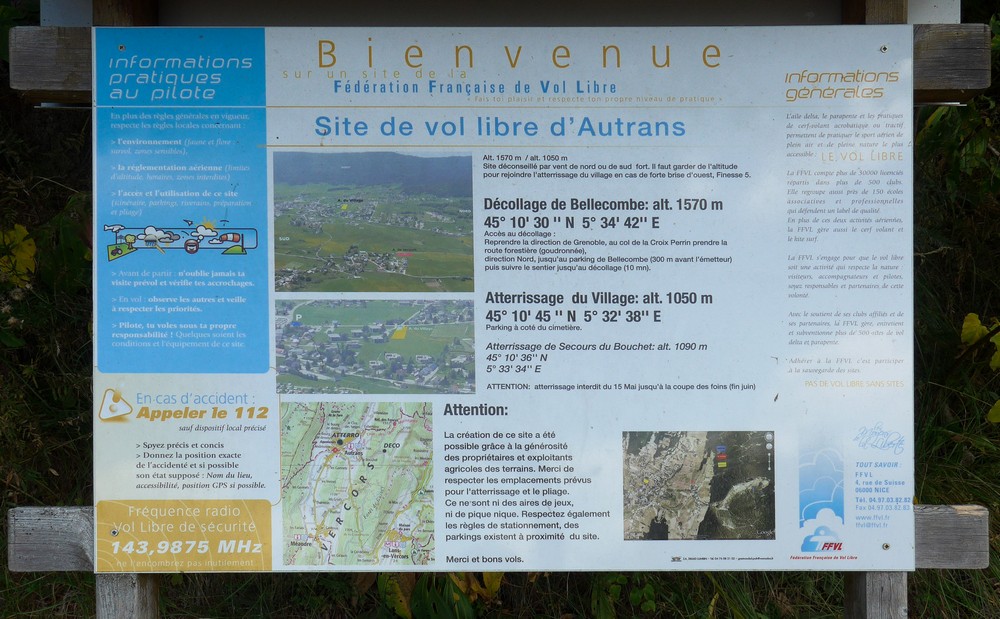 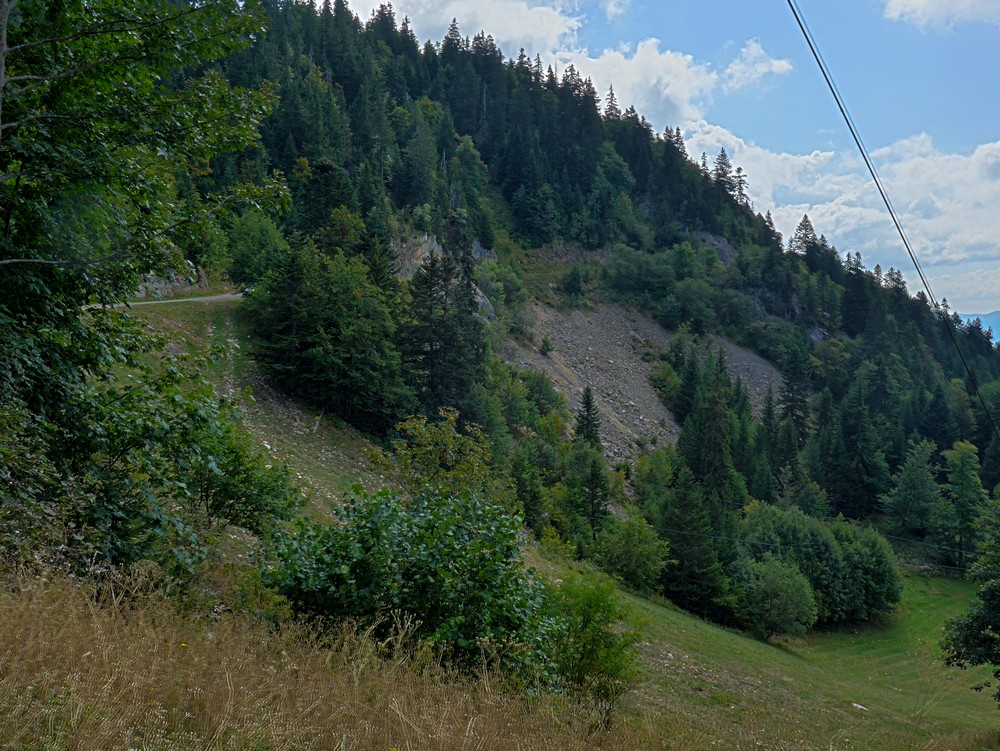 The road eventually led to the radio mast that I’d seen on the other side of this bowl. 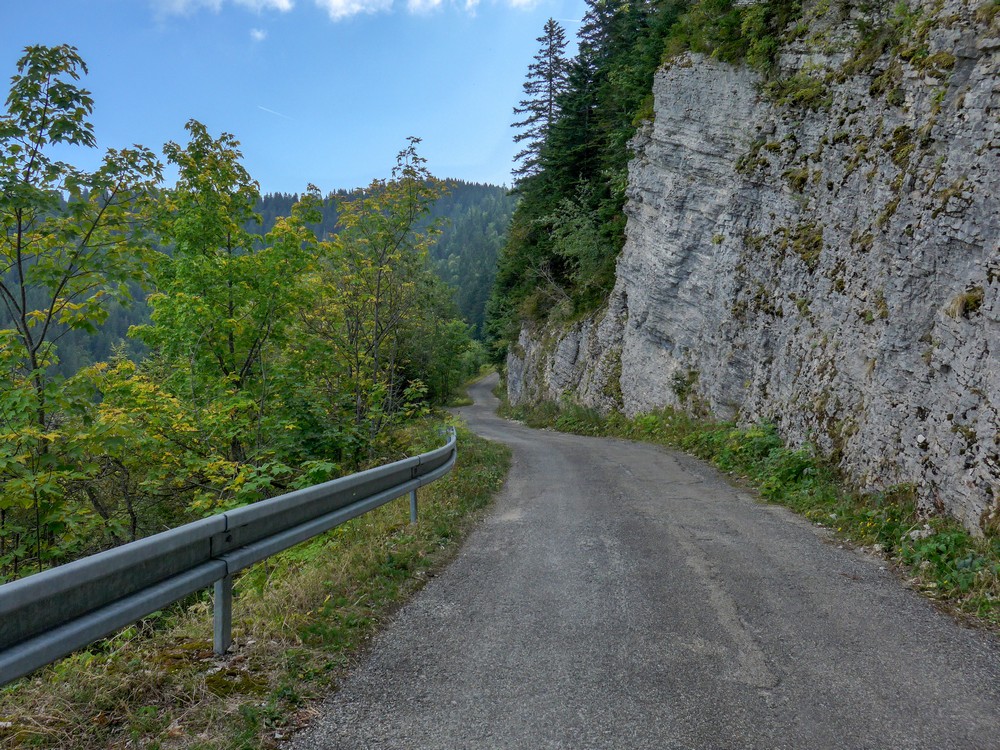 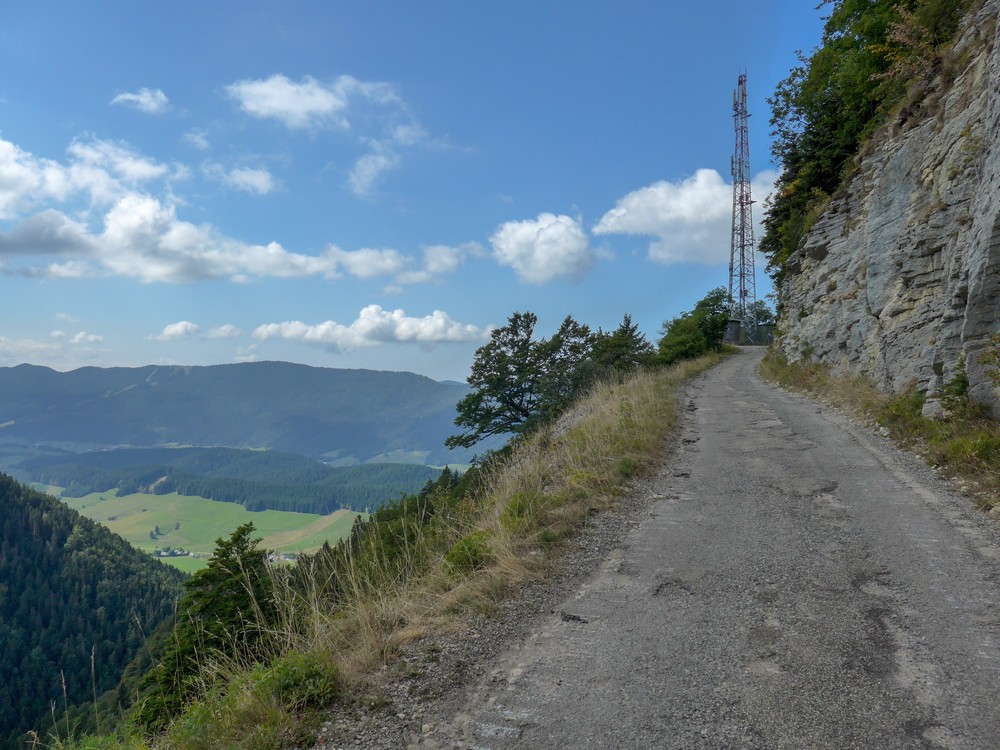 Then it was back into the forest. Eventually I saw signs of civilisation. In other words a building and some cars. 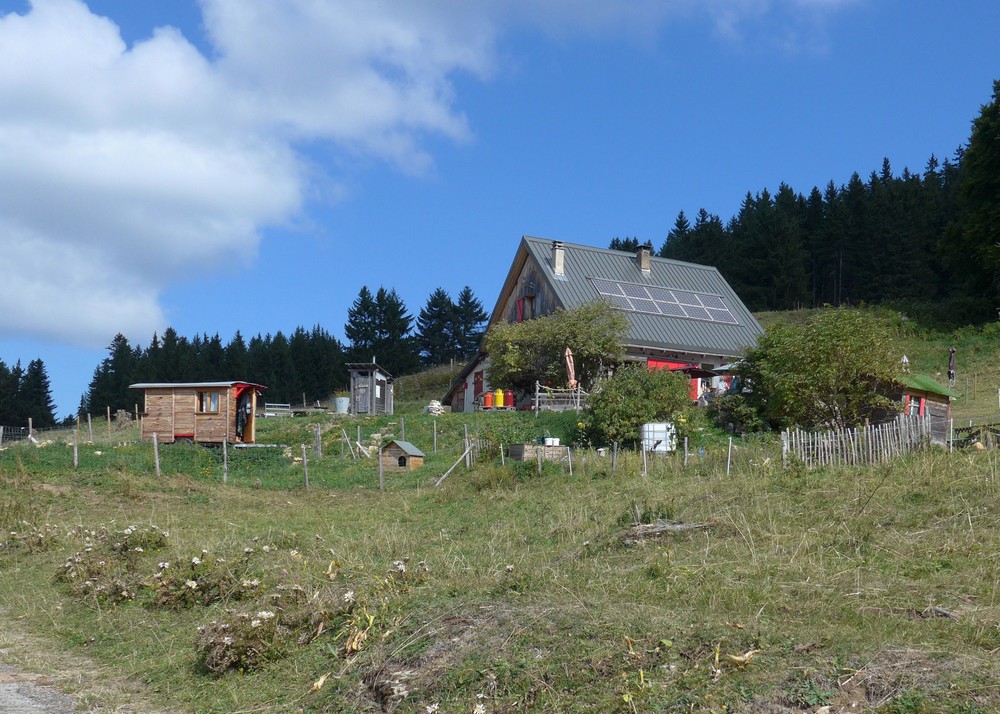 This is where my route departed from the Forest Road I was on and made its way up to a lookout point. The road up there had been very recently laid and was in perfect condition. Which was good because it was very steep. I felt like I was going up Barn Hill. But then I could see the top so I just kept going, out of the saddle. I had half expected the viewpoint to be right on the edge of a cliff and with a massive drop in front of me. But the ground slopes away quite gradually in front even though it’s still effectively on the ridge. 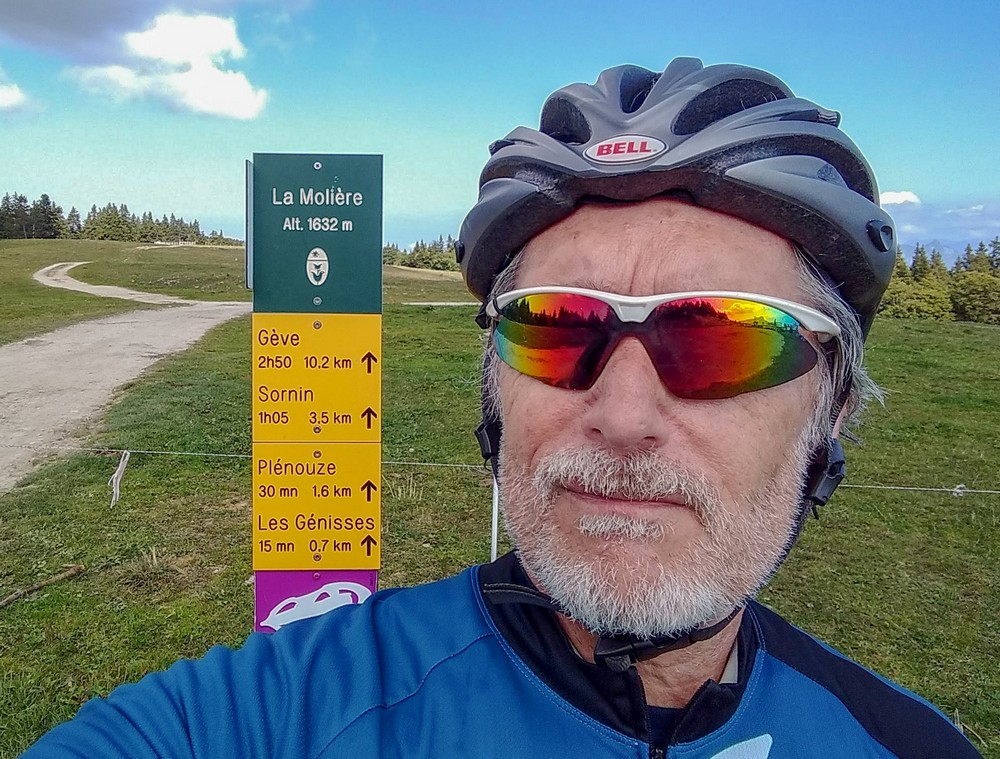 And the view of the Alps would have probably been more spectacular on a less cloudy day. It wasn’t peaceful up there by virtue of the cows ringing their bells loudly and incessantly.

I had a look around at the signs that were there. I think any chance of some higher vantage point would only be accessable by walking up one of the trails, which were well signposted. 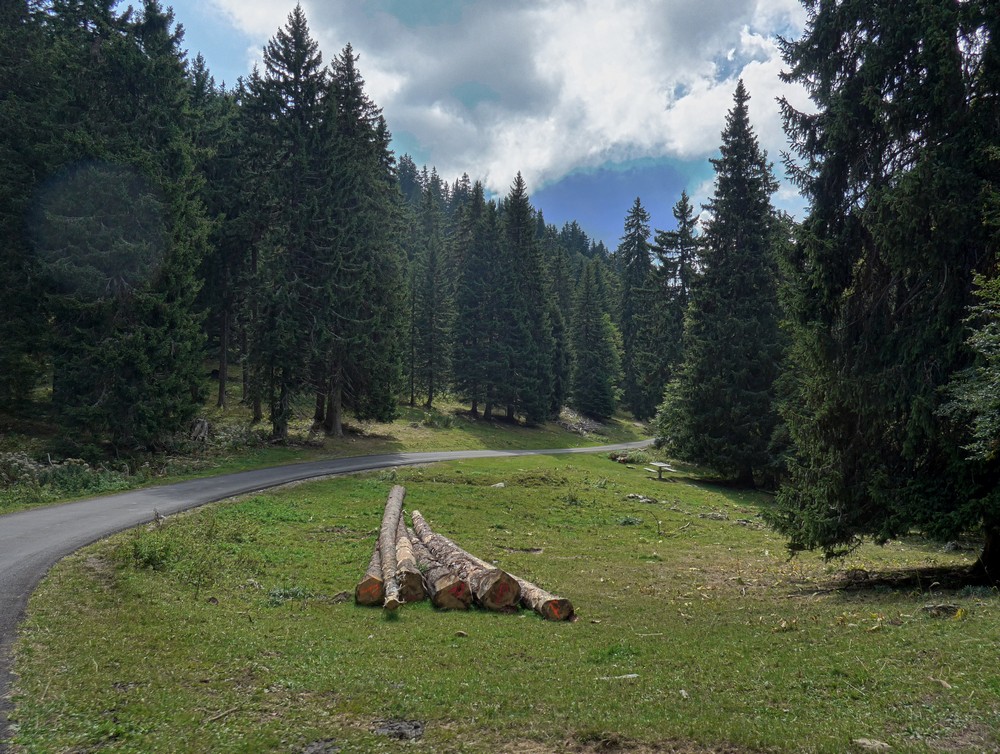 … back to the forest road I was on. It continued to climb slightly which surprised me. Nothing too drastic. Then eventually started dropping down. The road surface on this side of La Molière was much better. And I think that’s what Augustin meant when he said it will be easier descending on a good surface. Bad surfaces are OK when you’re going slowly uphill. 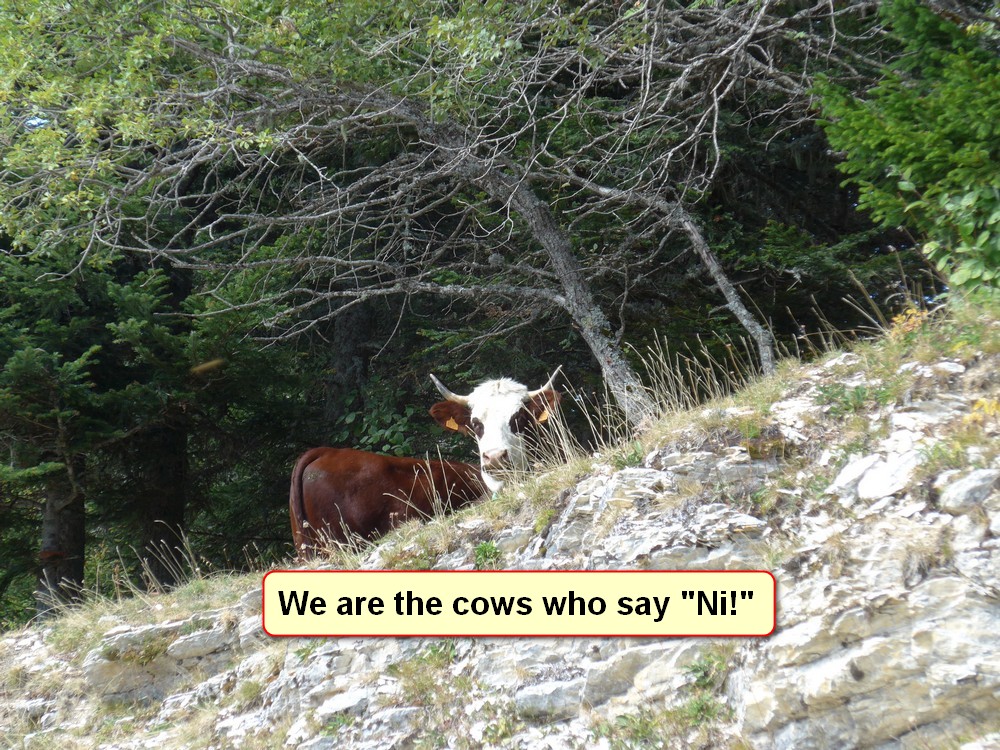 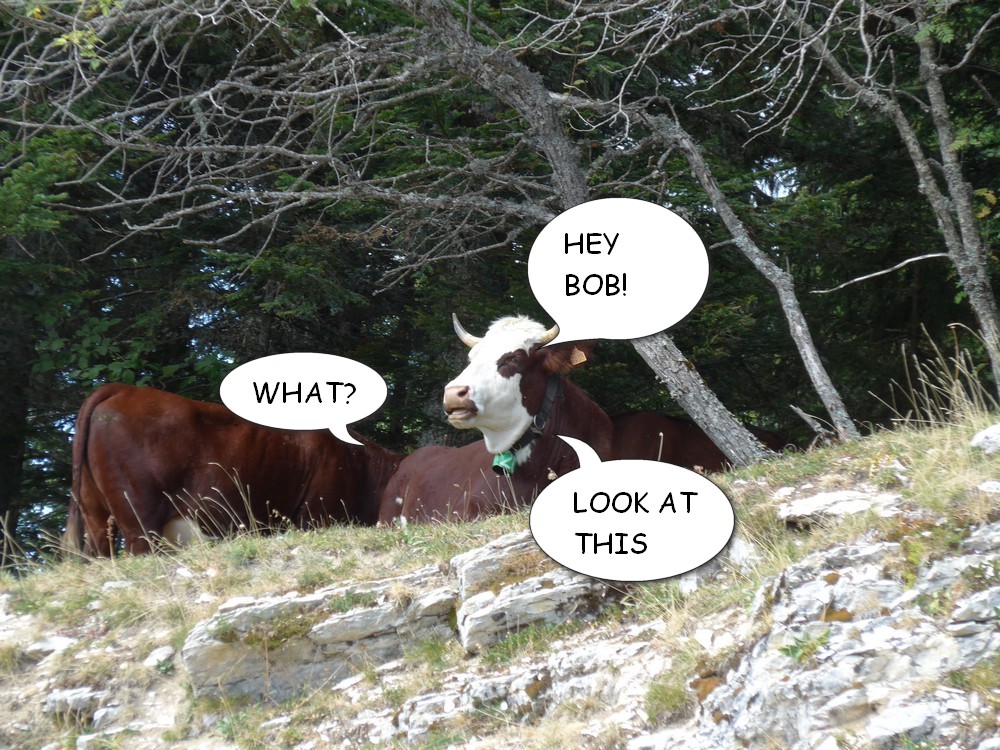 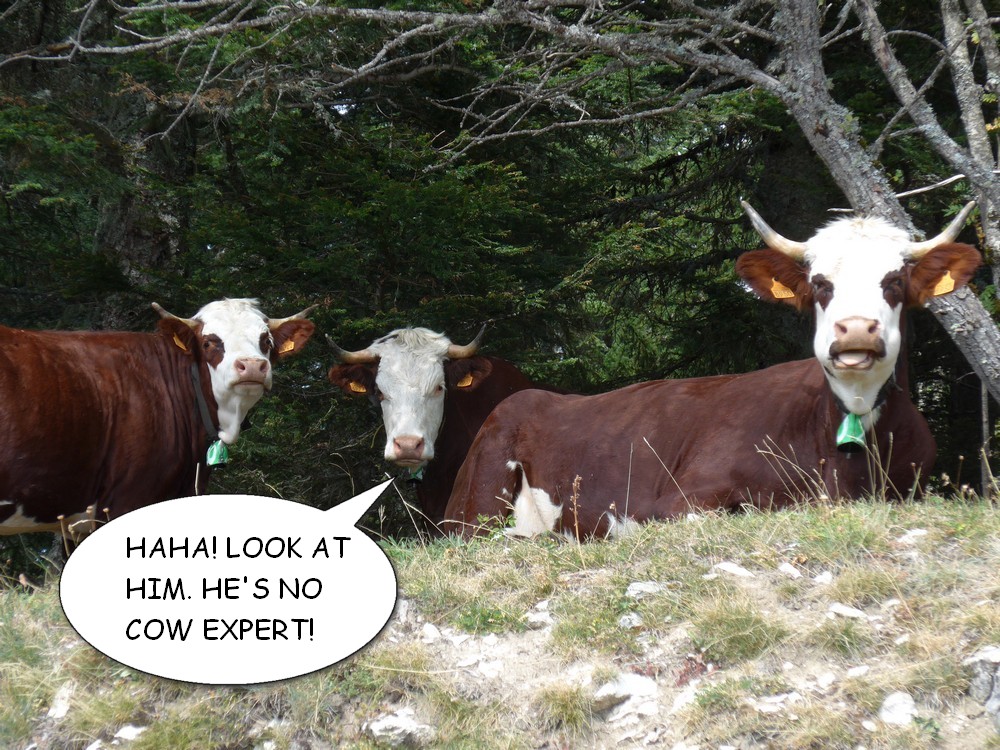 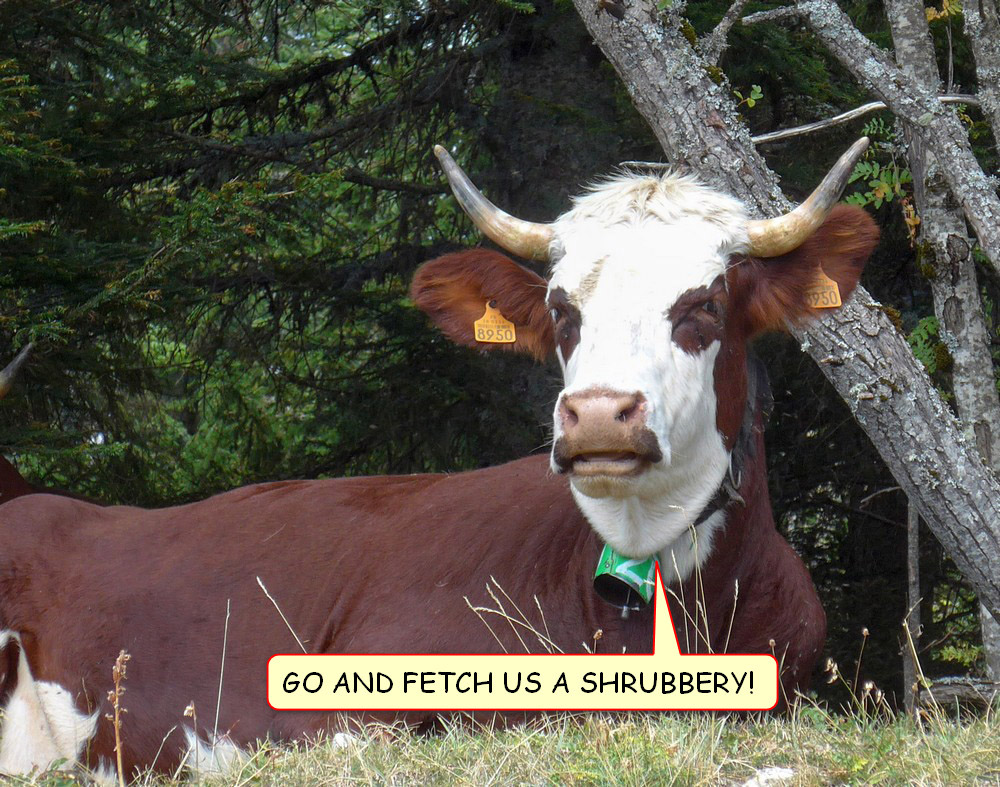 It was a pleasant gradual descent past several ski slopes and amazing views to the valley below. 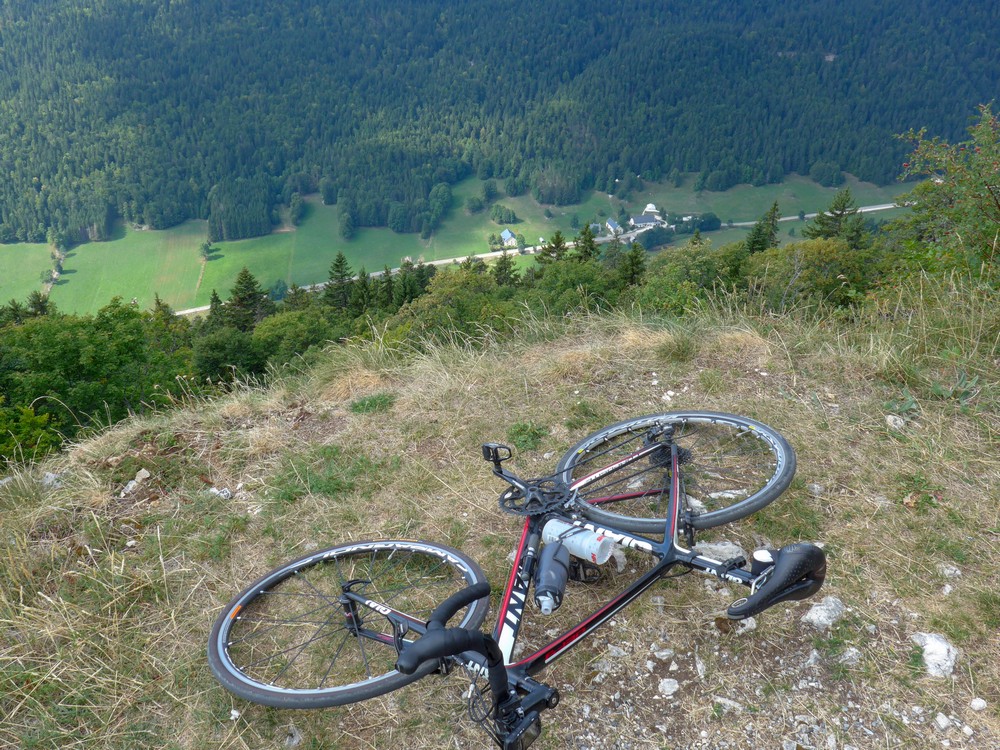 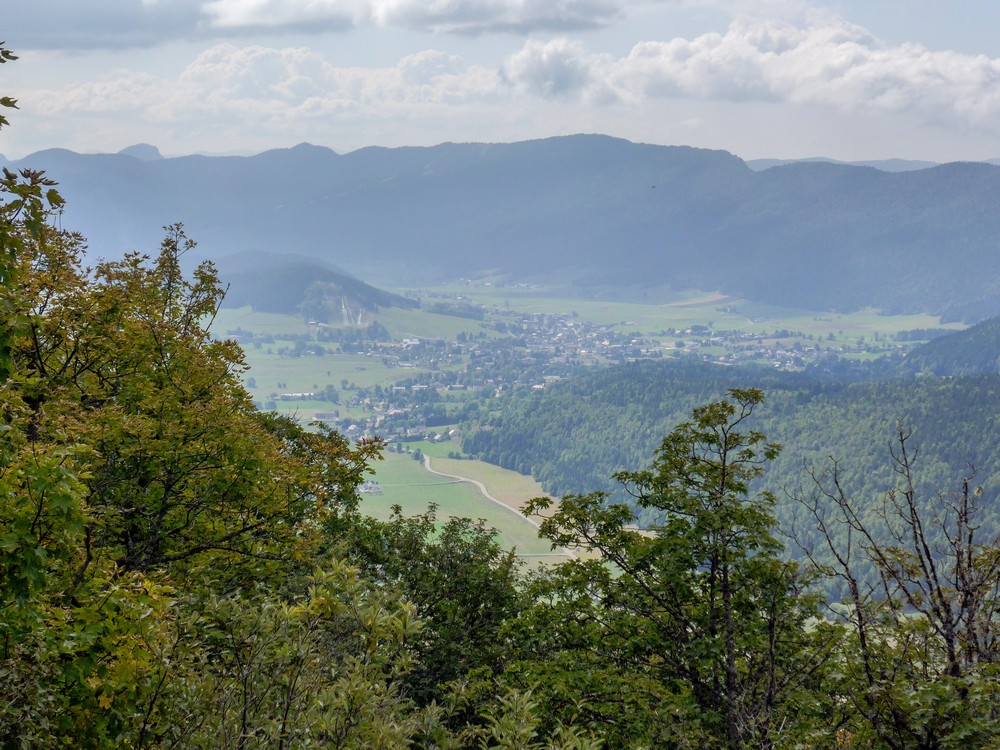 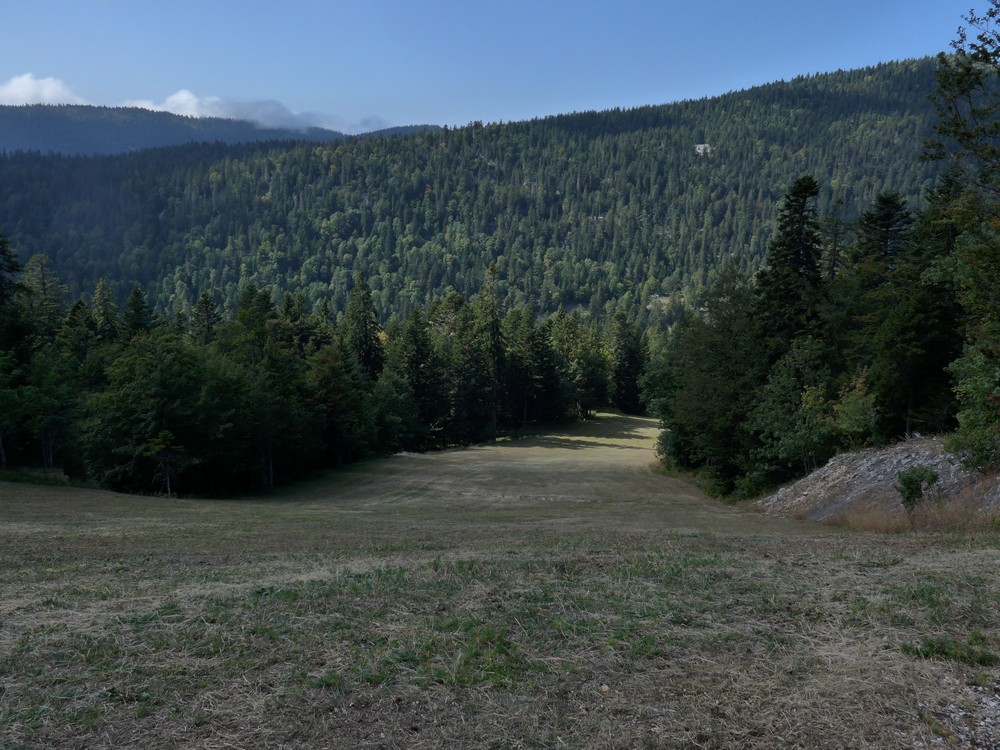 Eventually I ended up back at the tunnel that I’d seen a few days ago. And then I had the amazing descent down to Autrans. I put my rain jacket on to keep the wind off. This time I had no need to take any photos so I just enjoyed the whole descent without stopping. 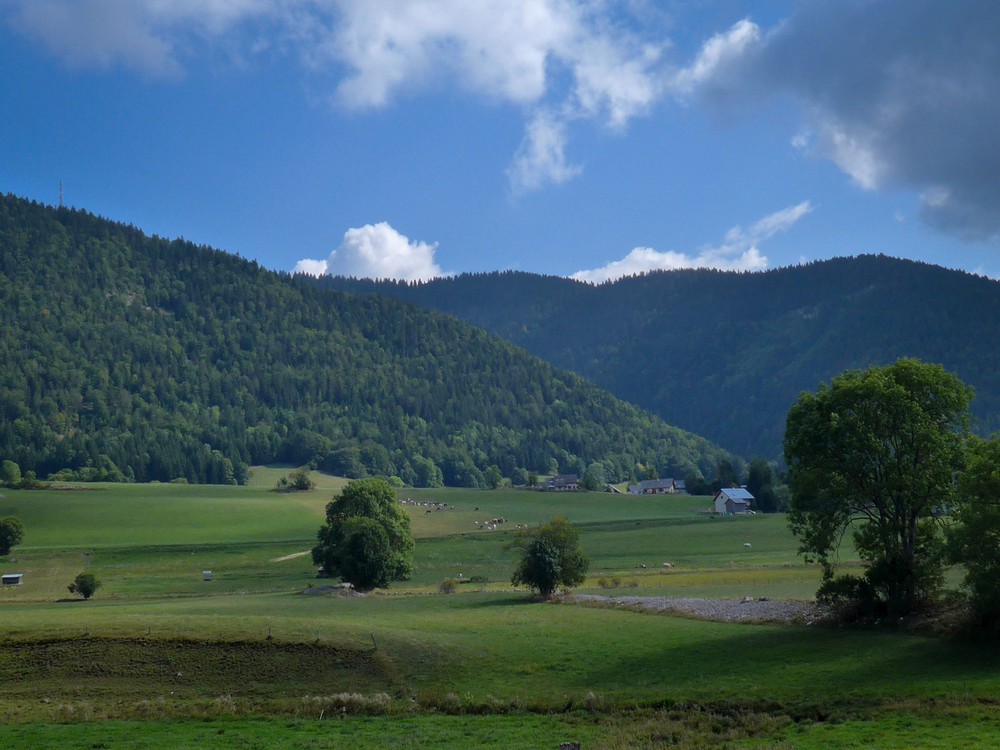 I was aware that the col de la Croix dear Perrin was coming up, but when it did I went up it quite strongly. Again no photos because I’ve already done them. So I went straight into the descent all the way down to Lans-en-Vercors.

I was glad I had my base layer and arm warmers on, but at times I was extremely warm. I felt ok afterwards.

The Vercors is just like one big playground for cyclists, as I see it. There is so much to explore and still I haven’t done it all.