This ride was recorded as I went along, once I’d had some porridge and cherry jam. 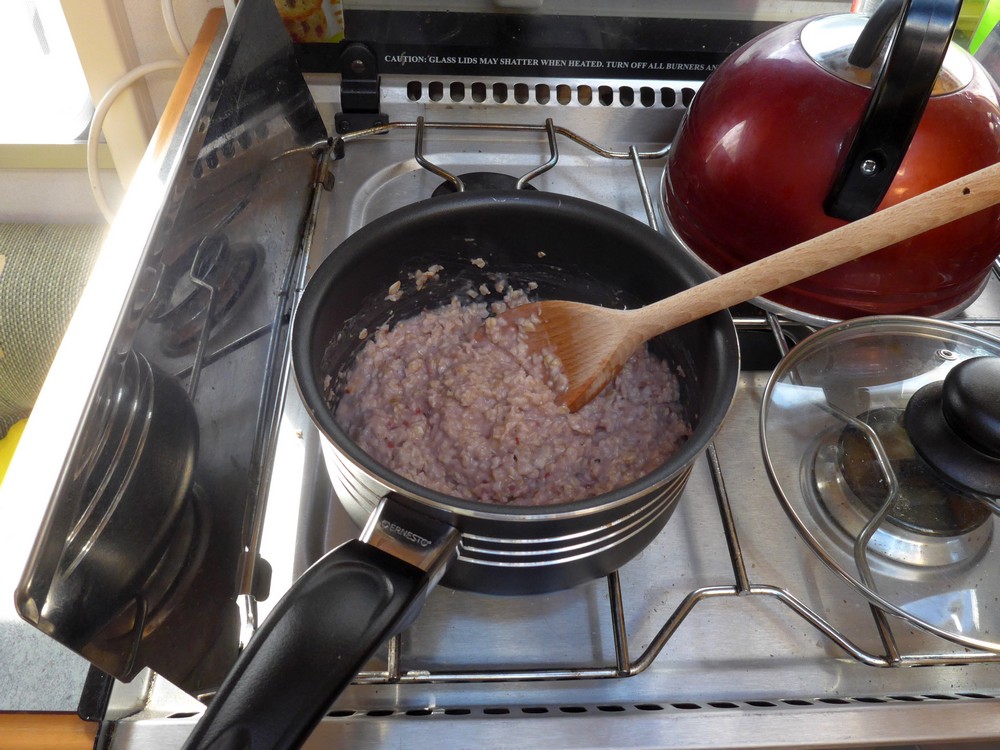 I’ve just reached the Col de Saint Rafael and this seems a good point to put my first report in. I got here at the same time as a Dutch rider, and we took each other’s col photos and had a bit of a chat about the glory of the cycling in this area. 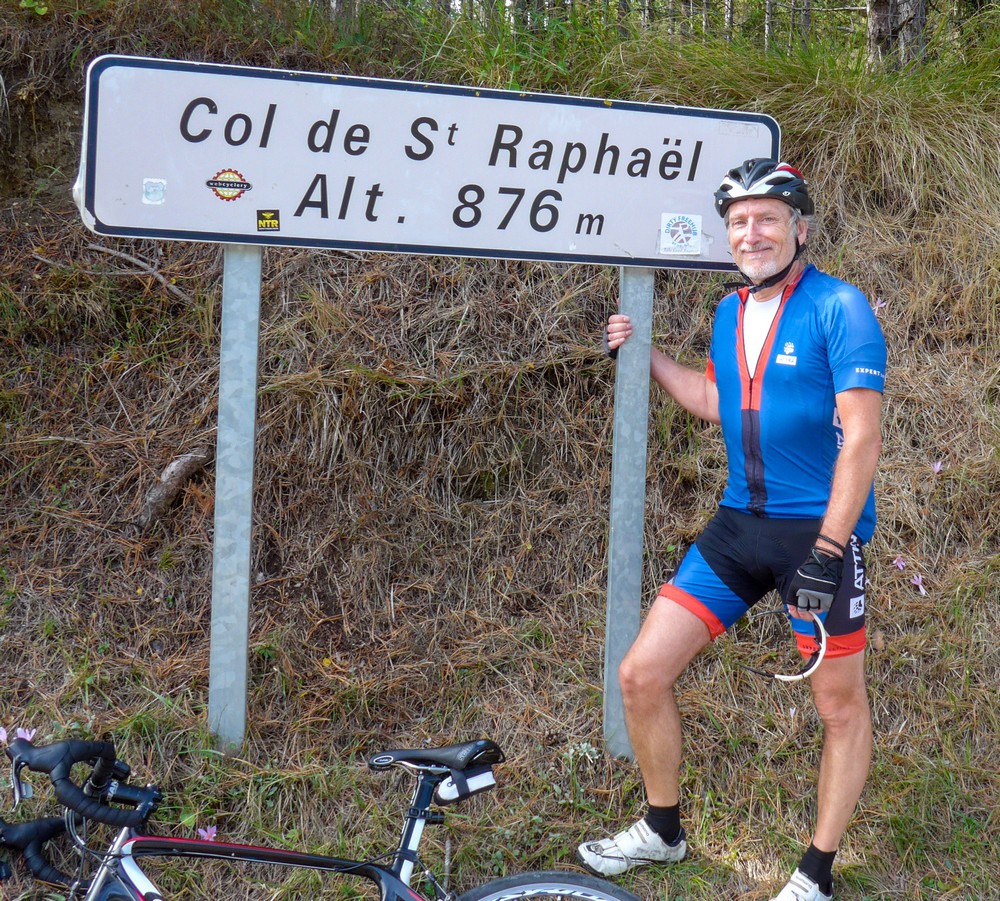 The climb was pretty easy – must have been about 5% I guess, much easier than anything I’ve done recently. I stopped about 3 or 4 times for photos. 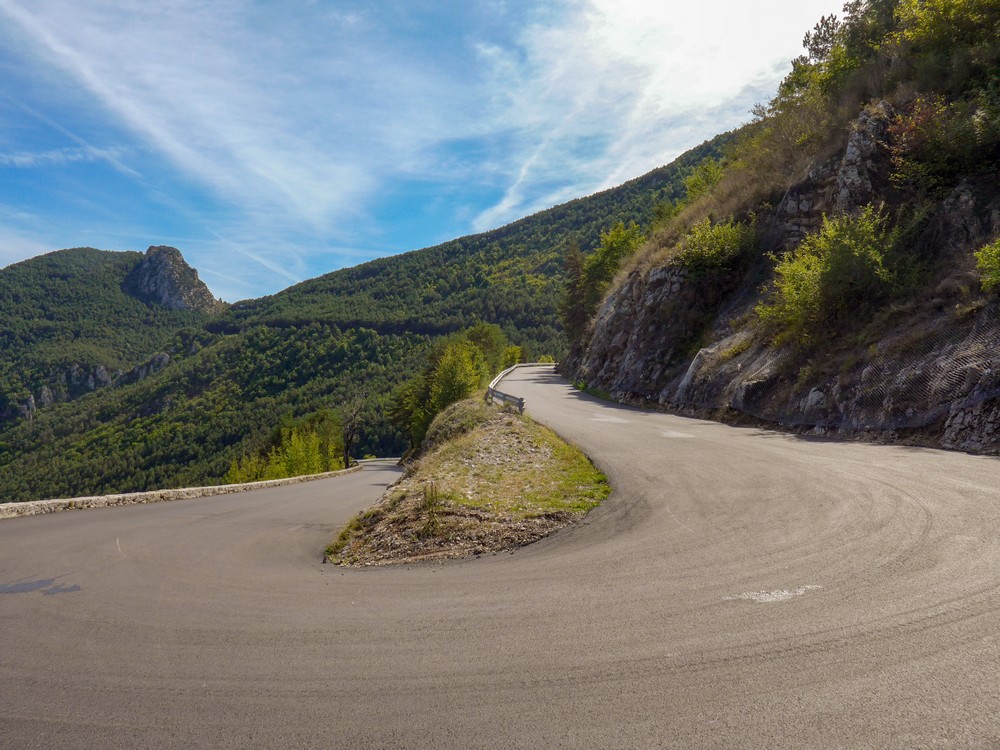 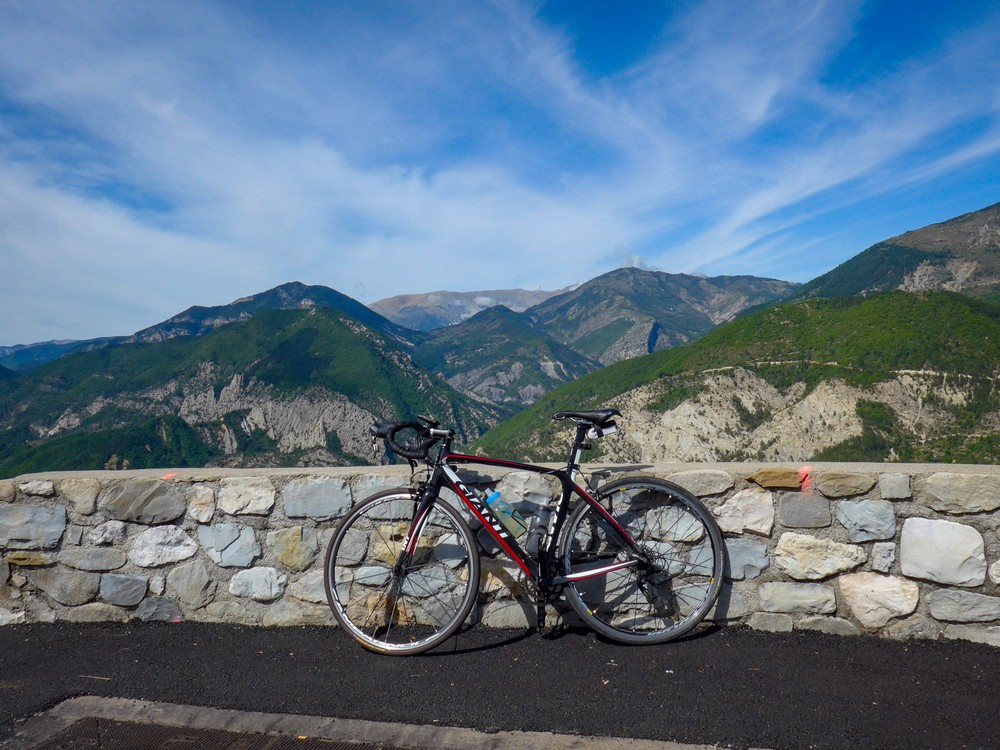 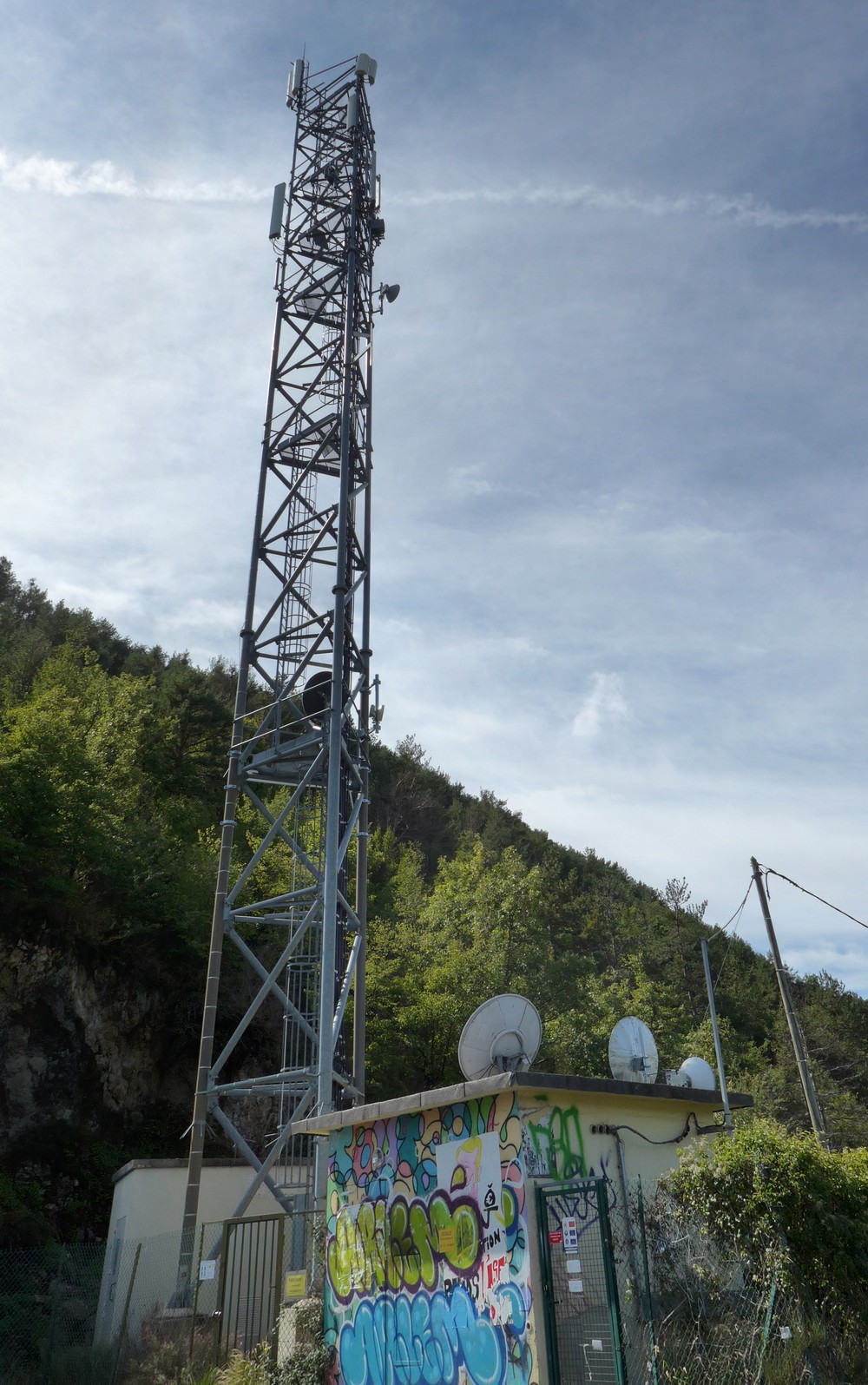 The climb so far has been on the shady northern side of the hill. In fact I went back to the van to get my base layer after about 300 yards into the journey, because I realised that the air had a bit of a nip to it, maybe after last night’s very heavy rain. The roads on this northern side were still quite damp and some of them a bit muddy. It must have been like a river during last night’s downpour. Anyway it’s mainly sunny with a sort of hazy cloud up there and I’m just about to follow the Dutch guy – he left about 5 minutes ago, down the hill.

Another report at 14 miles. Since the last one it’s become mainly cloudy but always with a hazy sun. 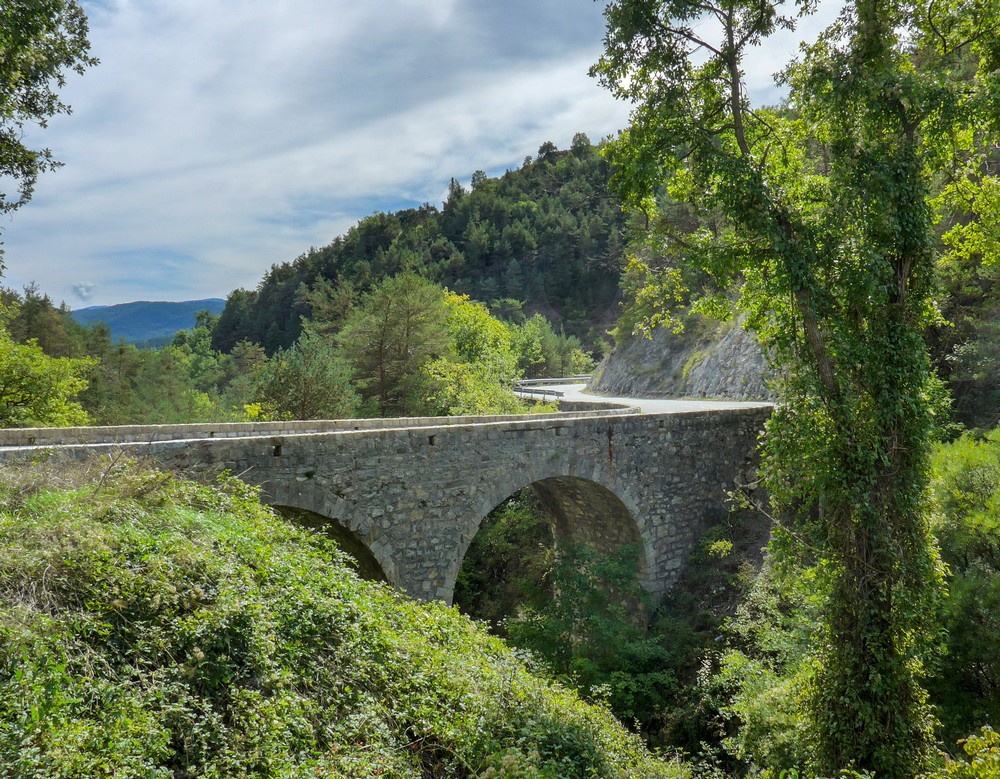 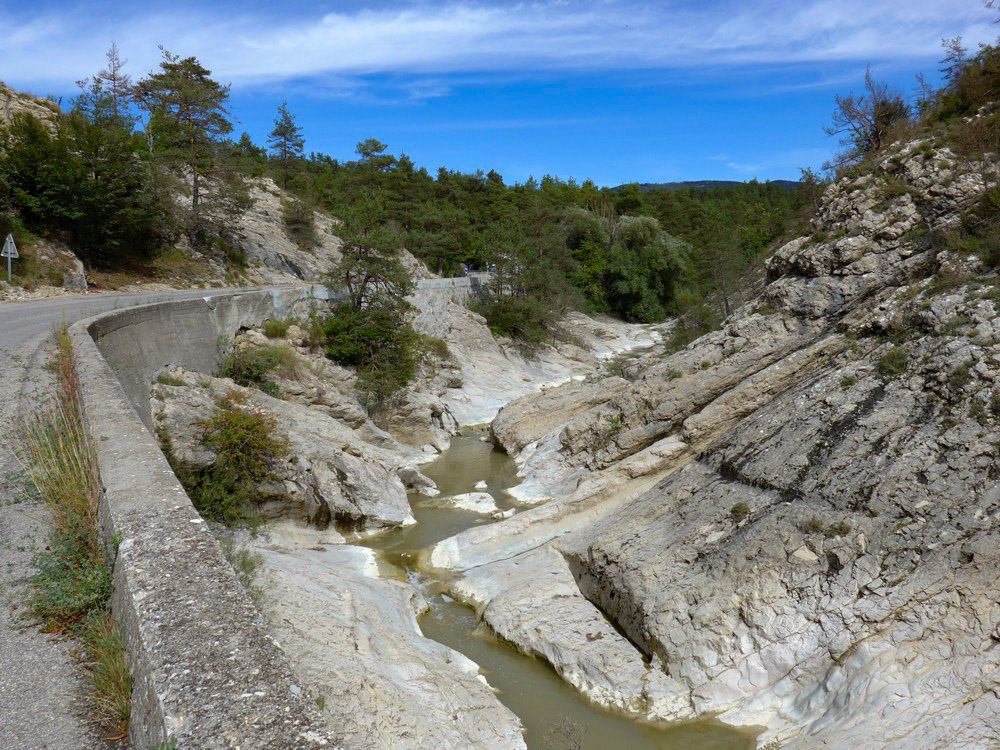 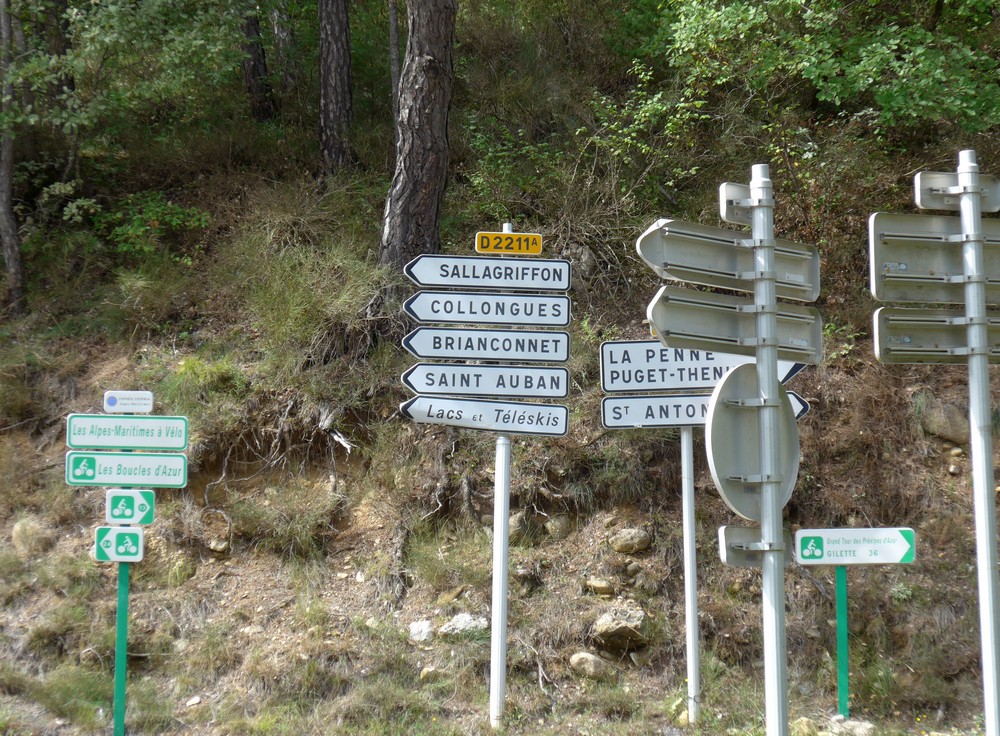 There was a gentle descent from the last place and then a gentle climb and I’m now on a twisting, amazing, gentle descent again so there’s no real major gradients on this road so far. Sometimes I’ve been stopping at the astounding views realising that it’s going to be almost impossible to capture them on camera. In fact just as I’m saying that, I’m looking at this massive ridge running across the skyline in front of me but I don’t think it’s going to be that photogenic unfortunately. 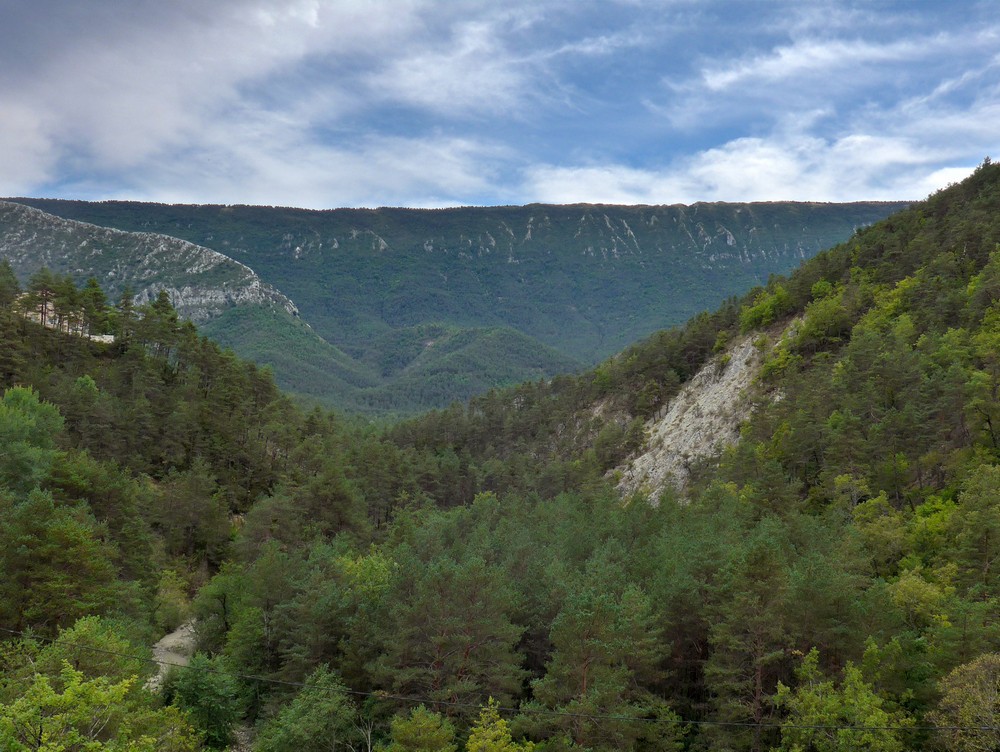 Just come through a sleepy village of some kind and I didn’t see a single soul; not a car moving, a person, or any other sign of activity. 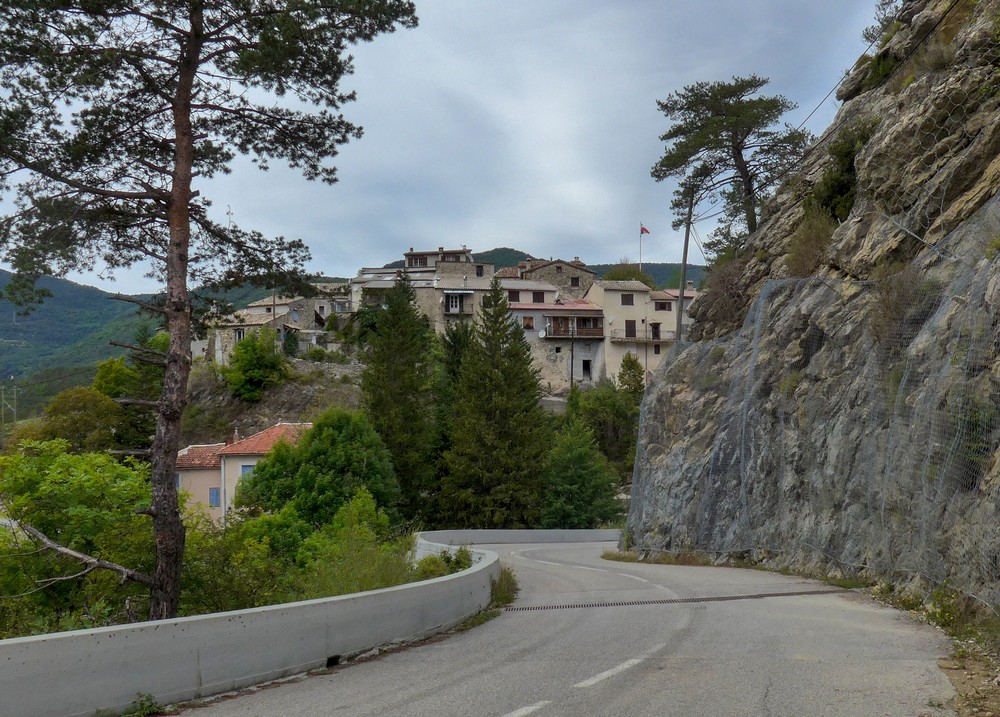 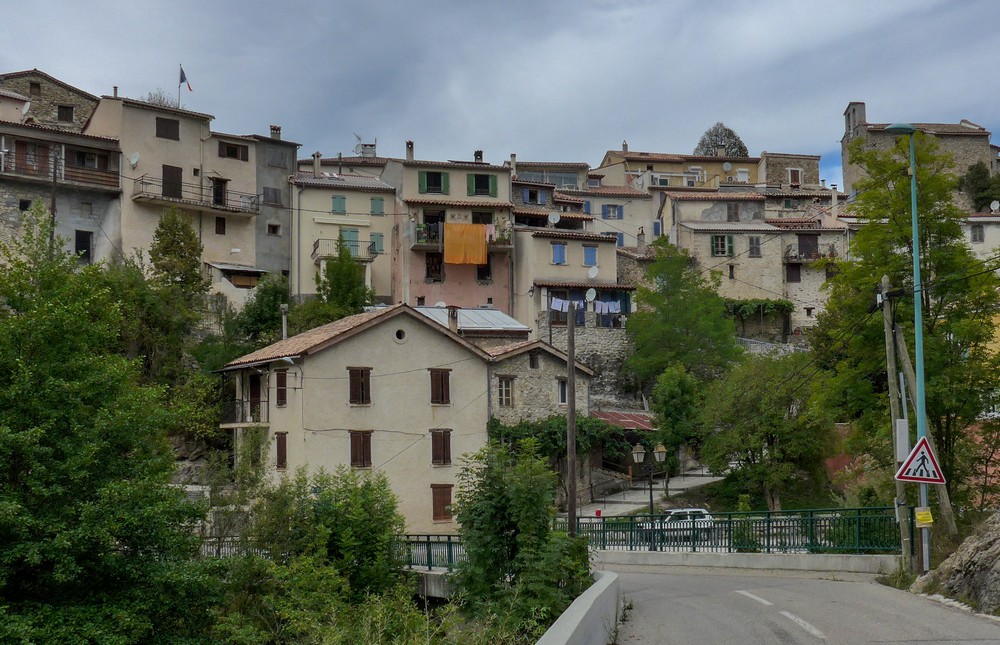 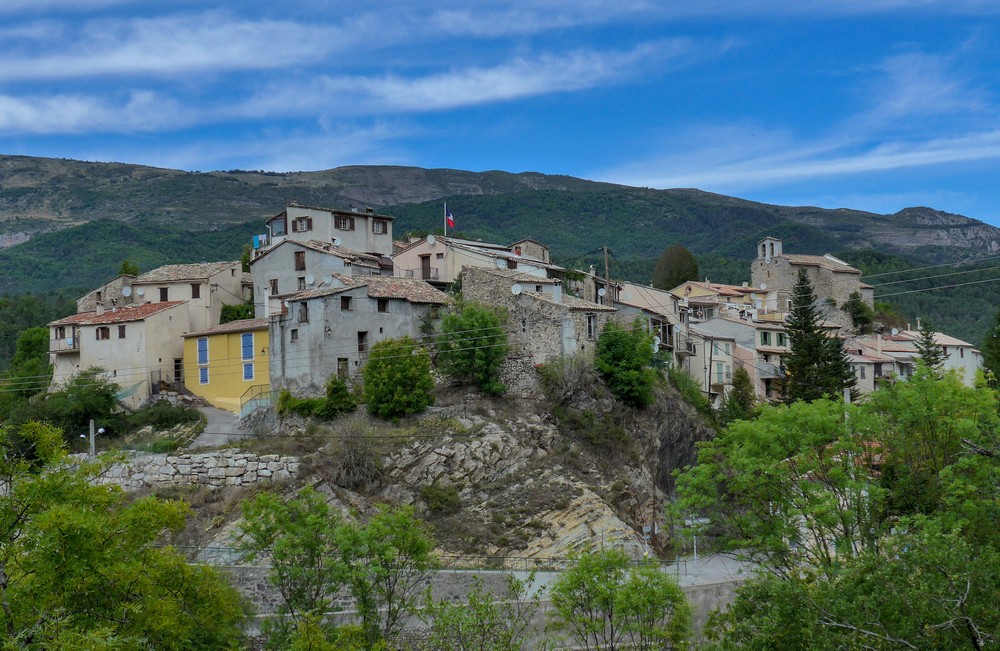 All I can see is a flag flying and people’s washing on the line blowing in the breeze – other than that, completely silent.

I’ve just stopped to take a photo so I might as well do a report here. Just after the last report, a climb started and it was dead straight and consistent gradient and it just went on and on and on up the side of the hill. My pace was absolutely rock solid all the way up it’s so it was just like nothing changed. To my left the side of the road was a rocky verge with trees going up, and down to my right were trees dropping away downhill, but I couldn’t see anything other than the damp road ahead of me. I was in the shade and it was quite cool but comfortable because of the effort. It was very quiet. All I could hear was my breathing and gentle mechanical noises from the bike. No cars passed me, just two motorbikes and one lorry in all that time. Then the road twisted slightly when passing some houses but kept climbing. But then I was in the sunshine again and somehow the drop was now on my left with the rocks on the right going up. The gradient eased and there were more bends, so at least it was a bit more interesting. Eventually I got to the top and I’m just on a straight flat bit of road at the moment so I think I’ll have a sandwich, half a sandwich, I’ve got in my back pocket.

That sandwich, or half a sandwich, was delicious – cheese and ham – and all the better for being squashed and mangled and soggy in my back pocket! 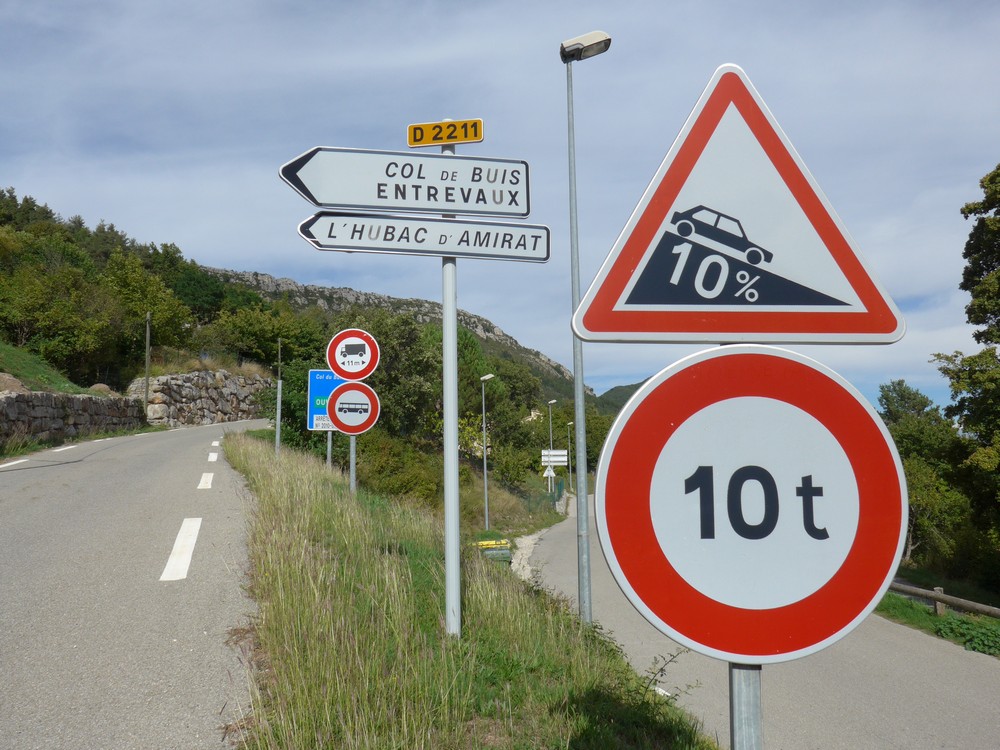 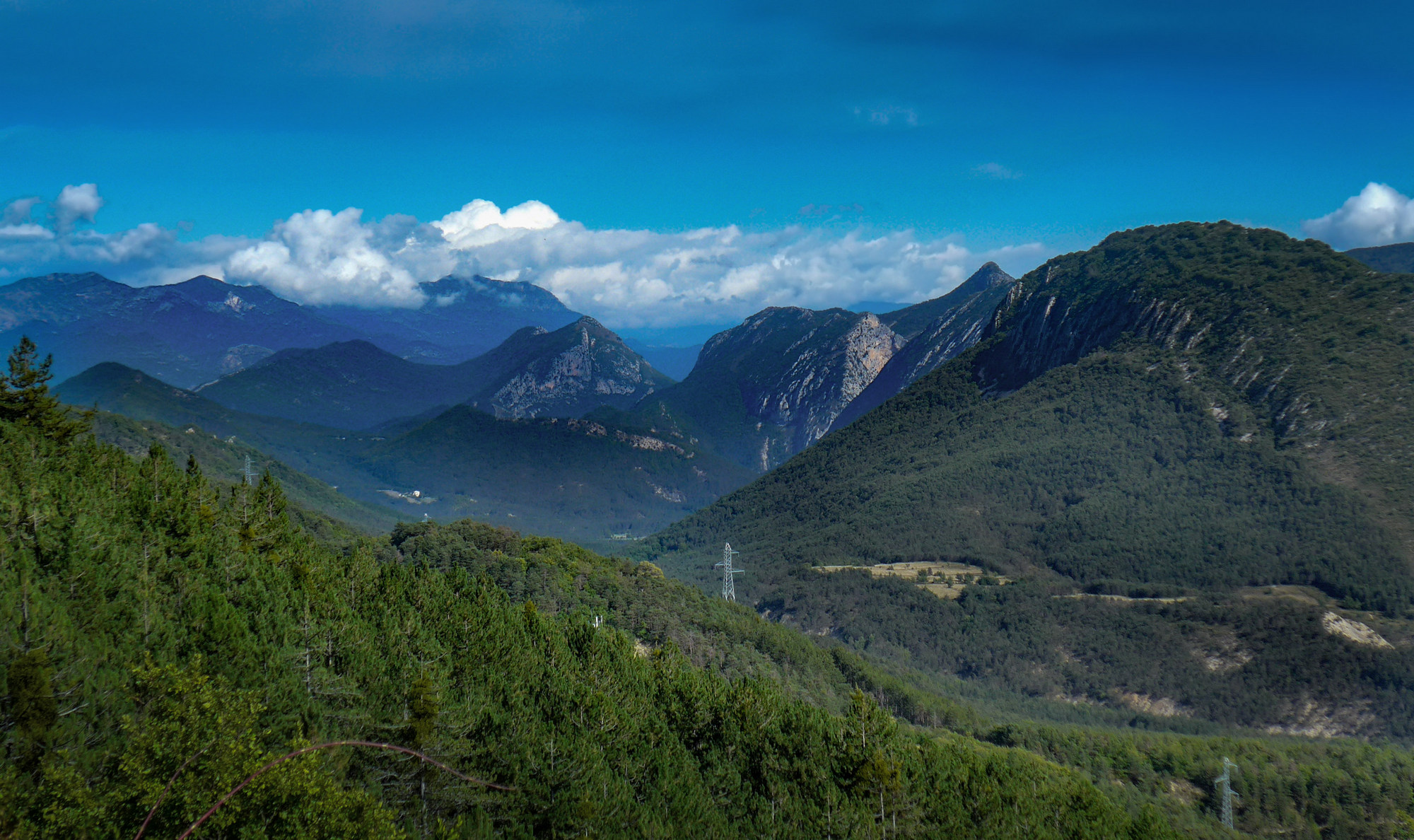 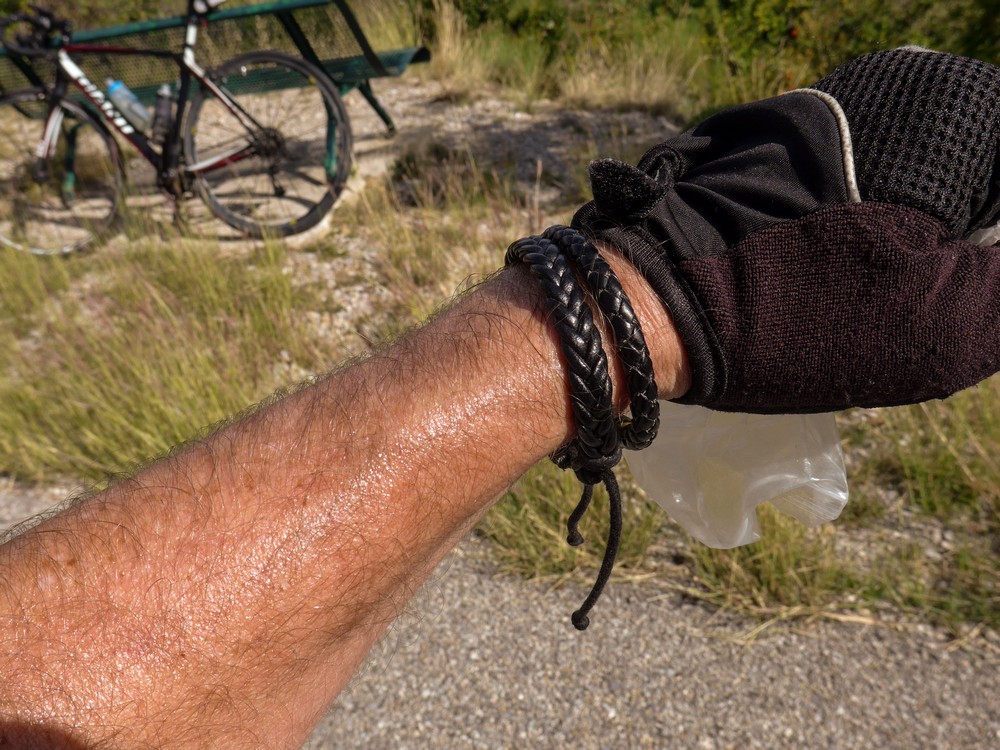 Since that photo of the 10% sign there was a relatively short but steep climb. I assume that the average was 10% because it varied wildly, some of it more than ten. I wonder if this was a more recently (as in post-industrial) built road that didn’t take horse-drawn vehicles into consideration. I stopped at the top to get my col photo… … and, in doing so, clogged up my cleats so they wouldn’t click on. Had to take my shoes off and use a twig to clear the mud. It is so peaceful up here. The sun is shining. There is a gentle breeze and just the sound of insects.

I was just cycling along when I saw the back of a sign, so as I passed it, I looked around and unexpectedly saw that it was a col sign, so I thought “I’ll have that!”, so I stopped and got a photo. And time for another report. 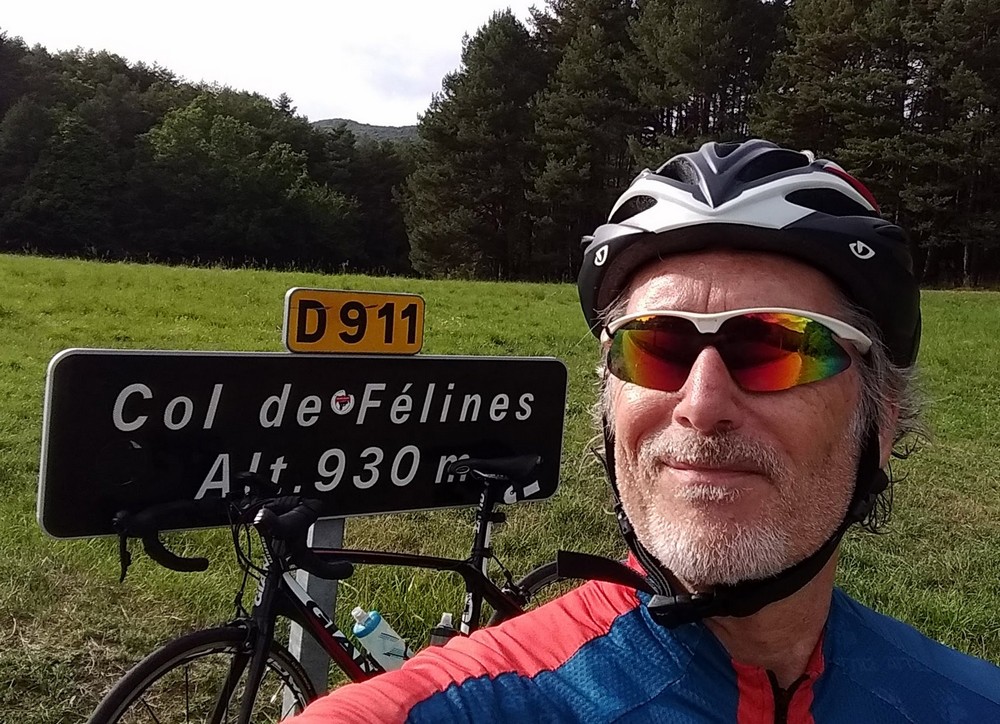 All the cockiness at the beginning of this ride about easy gradients was wiped out during the 10% climb to col du Buis, followed by a ridiculously steep descent, which had my hands aching, there was so much braking required. That was followed by another ridiculously steep ascent out of a village where, at one point, I noticed 2.9 mph on the Garmin. Standing by this col sign it is so peaceful. There is nothing but insects and bird noises, and even they are very subdued. There’s not a breath of wind and a hazy sun is shining down.

From Col de Félines there was a 5-mile, 20-switchback descent to Entrevaux with some nice fast stretches. Around one bend I was amazed to see this: 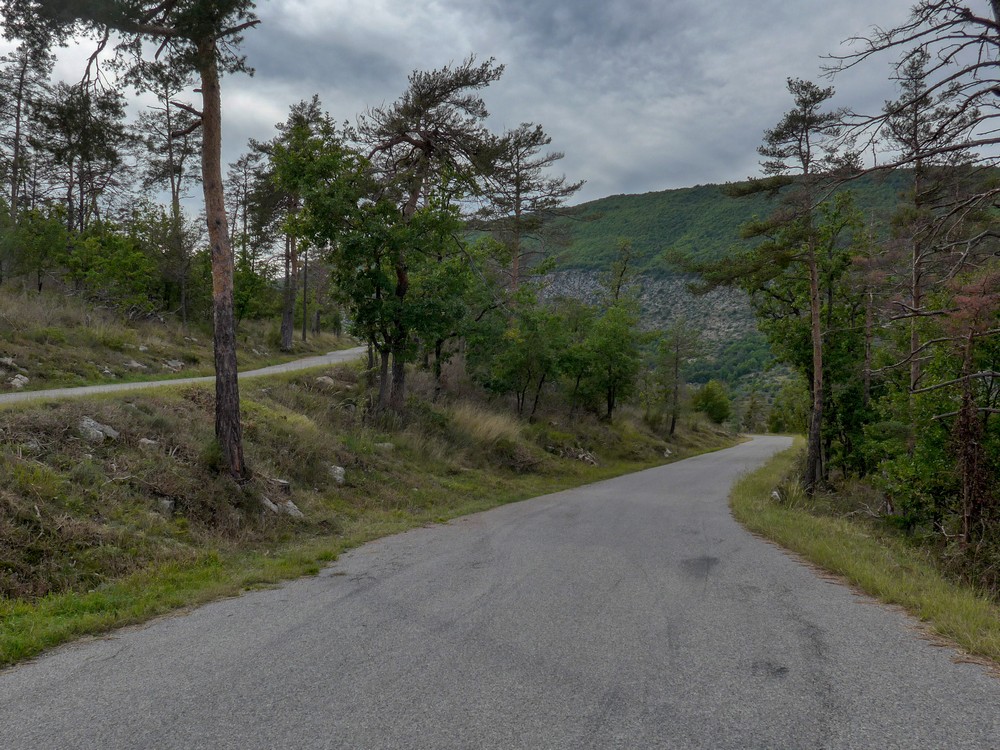 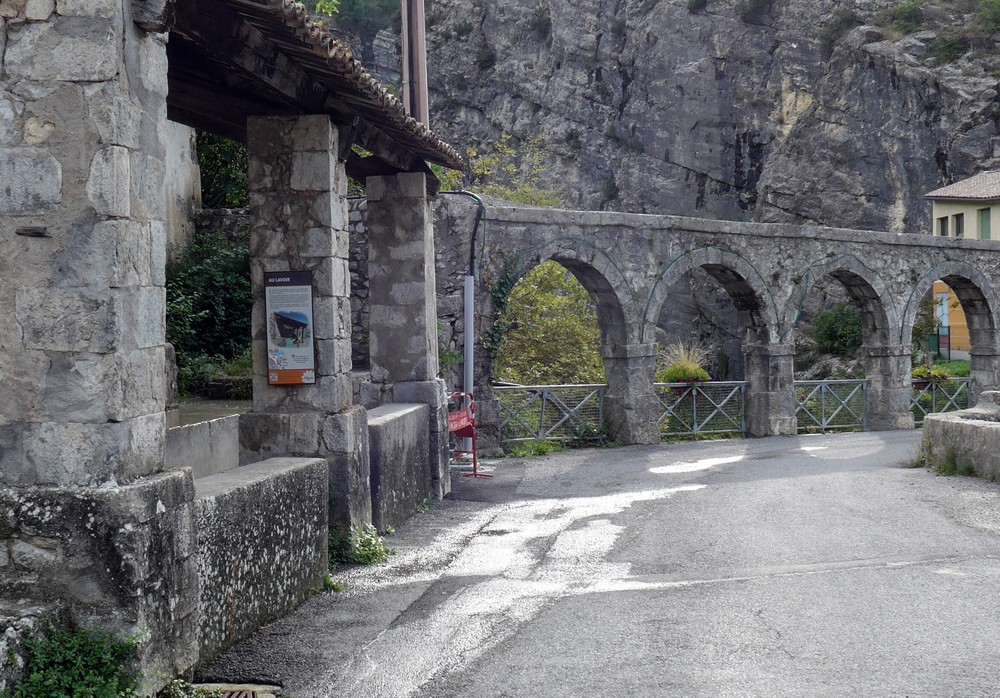 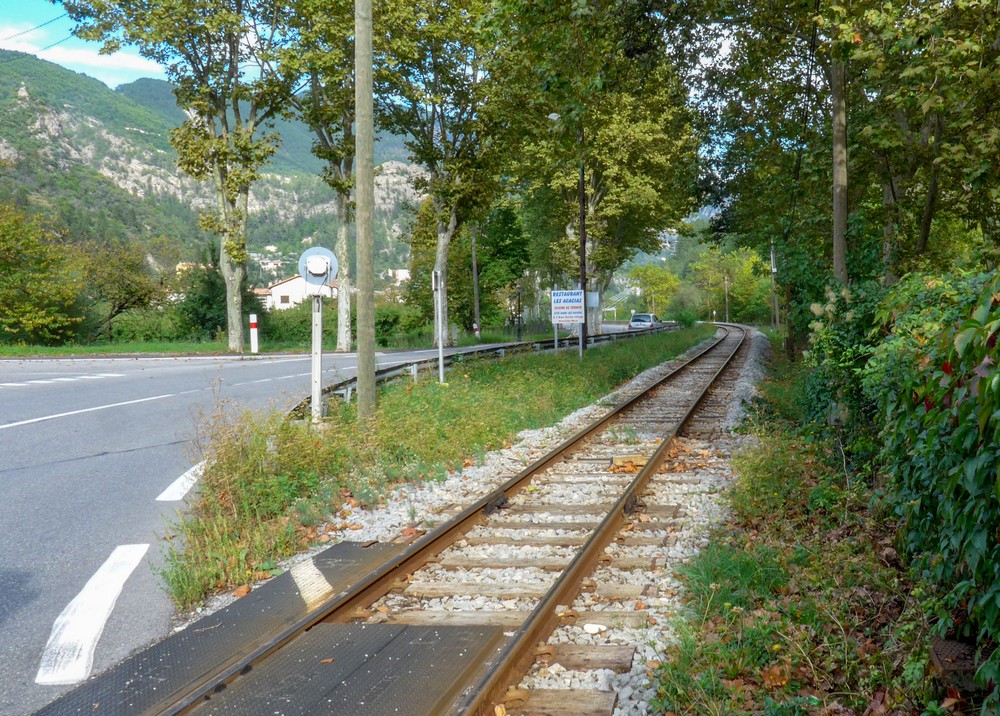 From Entrevaux back to Puget-Théniers was along a rather busy main road. Fast traffic. But it was a lovely Plane-tree-lined road, with the railway and the river Var alongside.

When I was younger (early teens) I used to dream of cycling in France. I had several books on the subject. Invariably they would feature a photo of the archetypal tree-lined road. In fact I also used to have a poster with two cyclists silhouetted against a TLR. And now, I realised, as I was cycling along that road, that I’m actually here doing it. So I guess some dreams do come true eventually….