The day started a bit cloudy and I wasn’t sure if I’d go for a ride. But then the sun started coming out and that always inspires me. So I aimed to leave at 3pm, after an afternoon nap. Well, you know how it goes, I snoozed ’til four and then had to put new cleats on my shoes because my old ones were so knackered they didn’t clip in any more. I also oiled my chain. 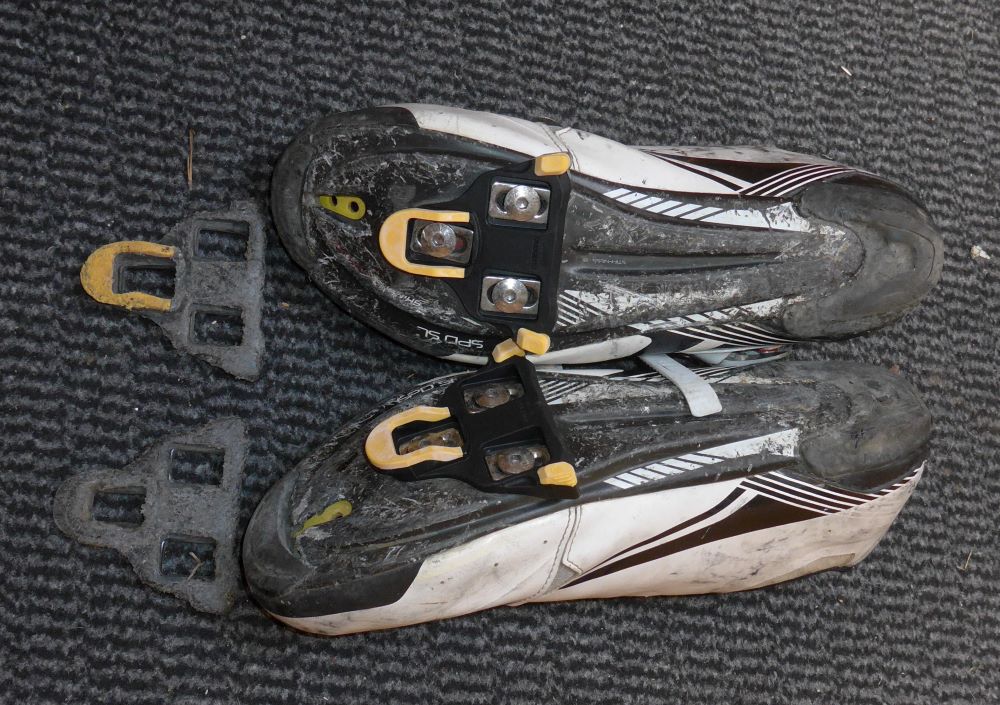 So I probably left about 4:30. When I was getting ready, I put a base layer on, but it was so hot in my van, I took it off again. As soon as I started to ride I nearly regretted it. For the first half mile I very nearly turned round and went back to get it. But I reasoned that the climbs would warm me up. What a revelation it was with the new cleats! Why-oh-why do I leave it so long to change them? It’s only a 5-minute job.

The first two miles of the ride was downhill. I stopped at the view of Frahan and got a photo. 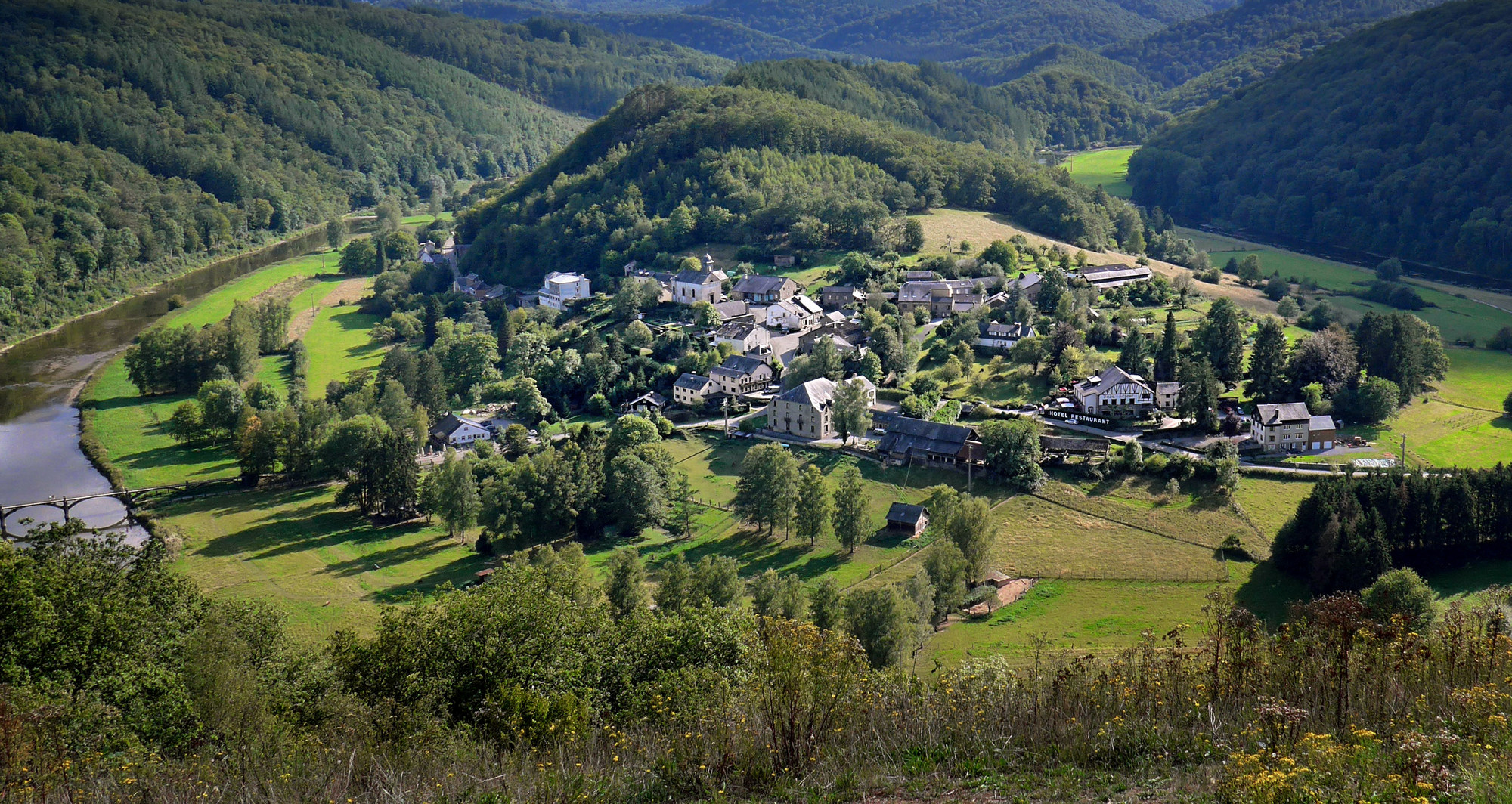 About a mile later, during the fast descent, a particularly loud motorbike came from behind and whizzed past me, followed by another, and then a trike. For some reason this freaked me out a bit and I found myself riding about 2 inches from the edge of the tarmac, and drifting towards the edge.  I was going too fast to steer away from the edge. You don’t often realise that to steer left on a bike you have to steer slightly to the right beforehand to shift your balance – normally this happens without thinking. Anyway what I’m saying is that I had no choice but to go off the edge of the road onto the rocky/grassy edge. I had no idea what was beneath that grass. I was fully expecting to come off my bike. Luckily it was reasonably level and once I was off I could turn back onto the tarmac in a matter of several metres. Of course all this had happened over a few seconds. I immediately glanced down and saw that I was doing about 23 mph. Once I was back on the road I was aware that my neck was extremely stiff – I must have tensed up during this hair-raising moment. Luckily it loosened up OK.

At the foot of the descent I did a slight detour to a campsite where I was thinking of staying that evening, but reception wasn’t open. Damn! I turned round and rejoined my planned route, which now was following the beautiful and wildly meandering Semois river. 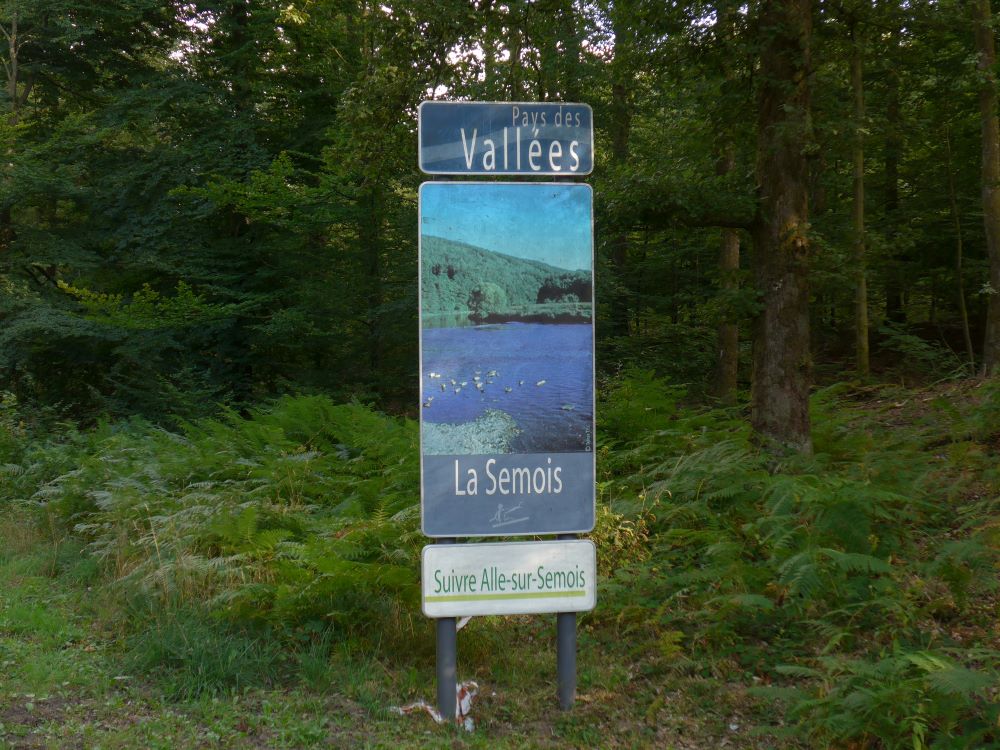 This was followed by a twisty climb through the forest. 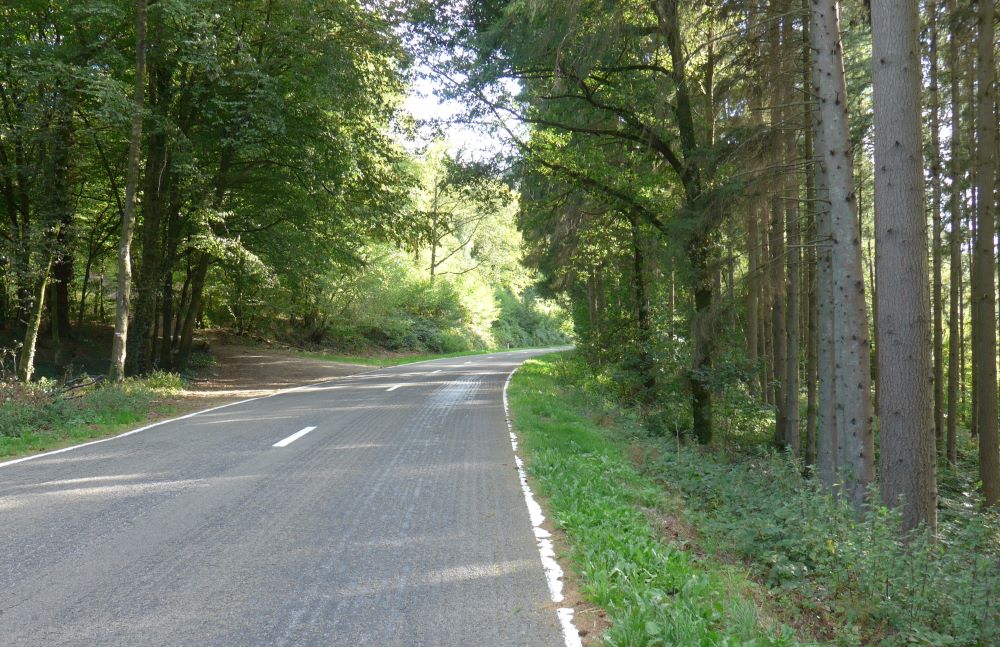 At one point I was surprised to see lots of stacks of prepared and rough timber sitting at the side of the road at what was obviously a saw mill, which spanned both sides of the road.

What amazed me was that it was completely open. In the UK that would have been protected with fences, gates, barbed wire, guard dogs, alarms, anti-tank emplacements, etc.

The road eventually leveled out when it reached a long dead-straight section. 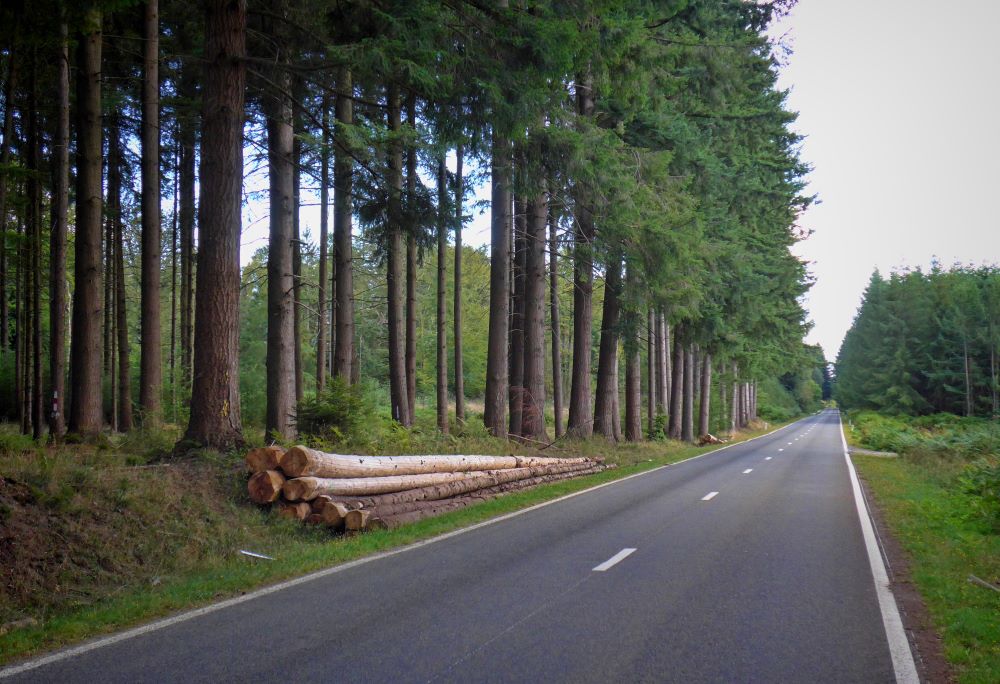 At the end of that straight my Garmin indicated left. It looked like a normal sort of road at first, but once I got past some people unloading their car it looked like this: 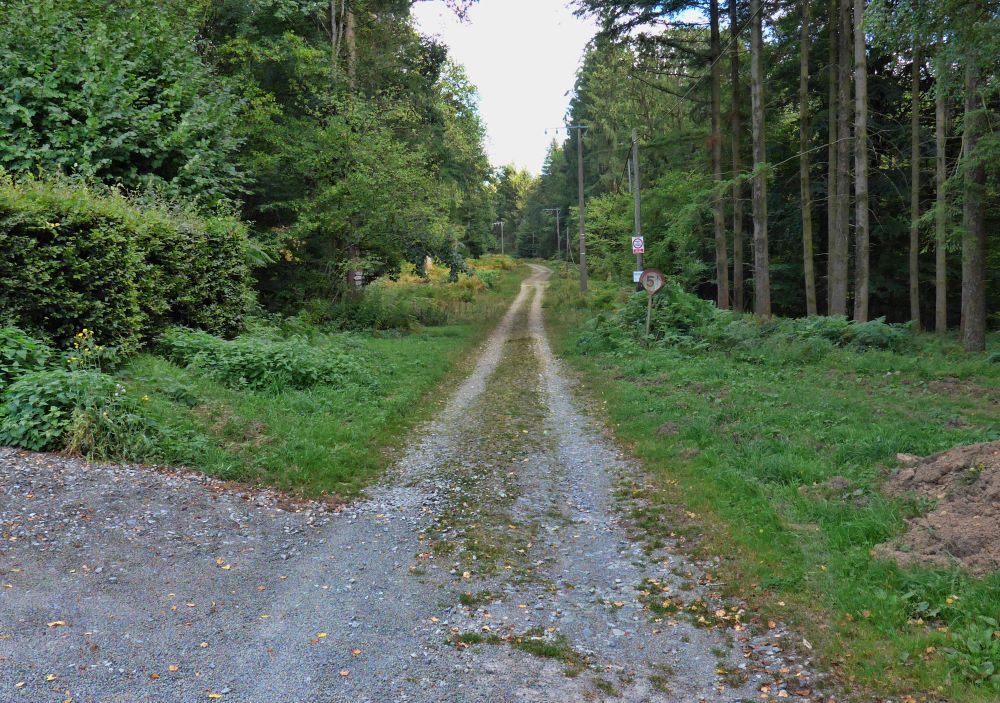 Hmmm, I wasn’t expecting that. In fact I had already taken a bit of off-road out of the route when I was designing it before I left. I expected everything to be tarmac. I thought for a few seconds then thought what the hell, let’s do it. It was downhill. I had no idea how long it would take to get back to real road. Deeper into the forest I descended, Around each bend I was looking for signs that I might be reaching civilisation. But no such reassurance was forthcoming. The surface was ridiculously bad in places. I looked at my Garmin and saw that I was doing 5 mph, and that’s downhill! I was so busy trying to find the right line among the rocks and potholes. I was aware that there was a good chance of a puncture. I’d had one before on a track like this. All sorts of thoughts were going through my mind: What if I had to climb all the way back again because of a dead end; what if I had multiple punctures and ran out of daylight (it was getting late in the day because of my delayed start); what if I were attacked by a bear!

It was beautifully peaceful there. 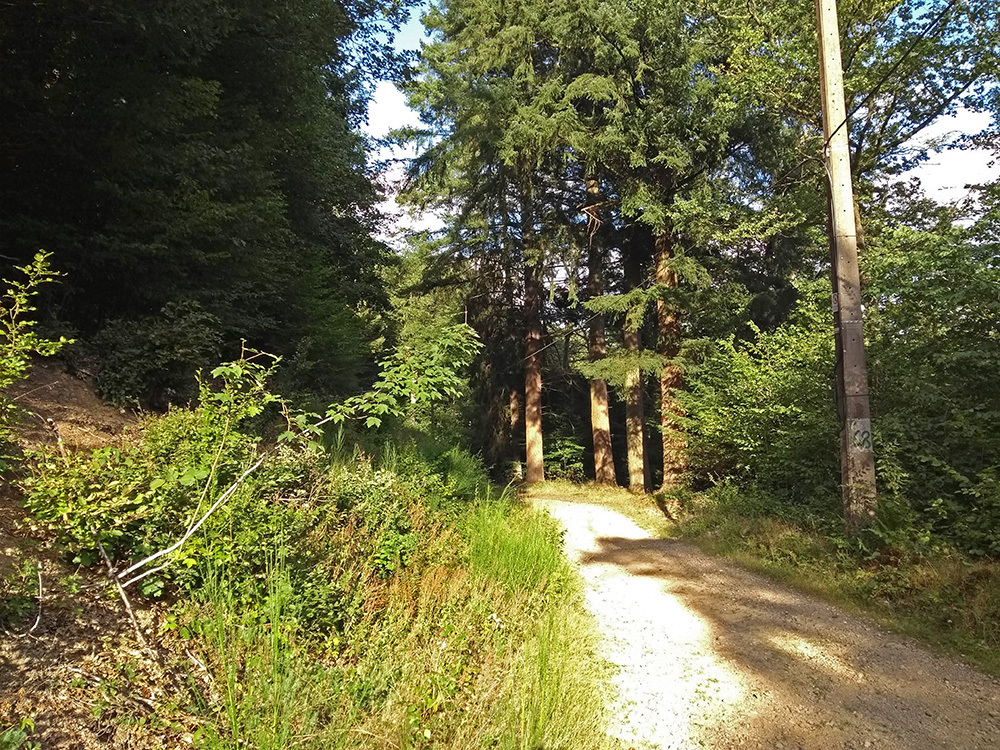 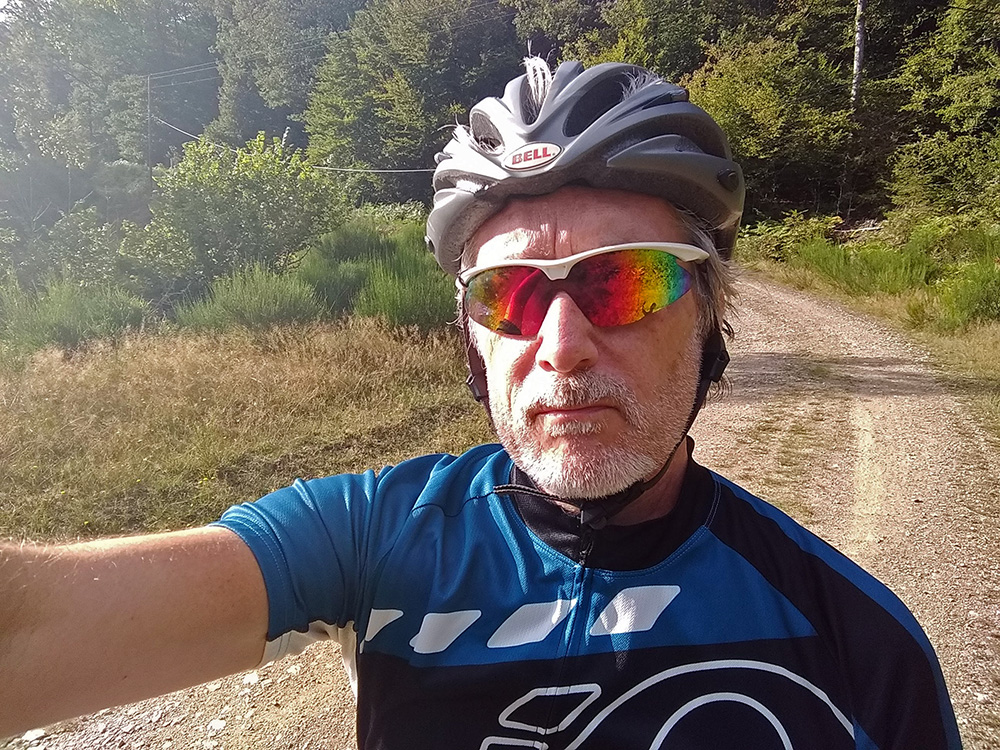 At one point I heard a motorbike way off in the distance, but that meant nothing – they are so loud these days it may have been 5 miles away for all I knew!

After winding down for ages there was suddenly a turn, and I could see on the Garmin that I was by a river (even though I couldn’t see it). What I didn’t know until later was that, at that point, I was about 15 metres from France! The border was just to my right, somewhere in the woods. I wonder if there was anything there? 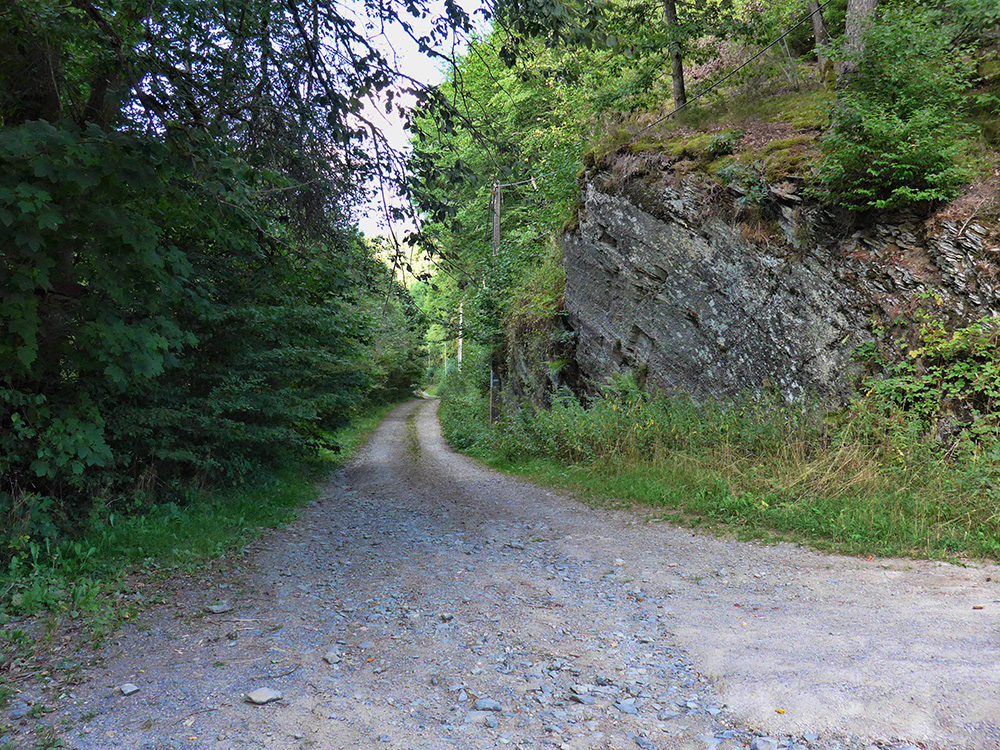 I followed the track by the unseen river. I saw a gate to my left – yes, signs of civilisation! Then a house. But still no road was in sight. Shortly after that, the inevitable happened – I had a puncture in my front tyre – at least it was the front – easier to do. 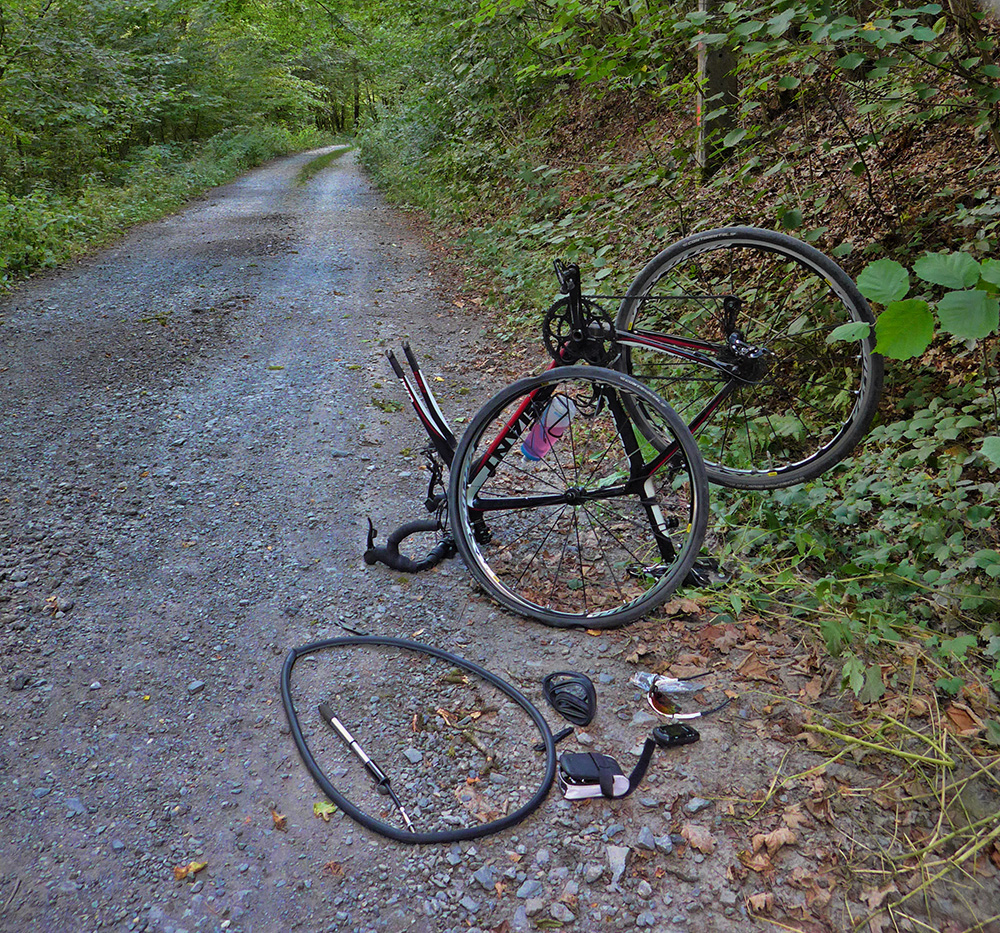 The good news was that I then heard a car pass quite nearby somewhere through the woods. First I got off the bike and started walking – I don’t know what I was thinking – I think I assumed that the road must be quite near. Or maybe I was looking for a ‘suitable’ place to fix the puncture – but the whole track was unchanging so I stopped walking. Anyway the walking was scuffing my brand-new cleats!

I changed the tube. Frustratingly it was one of those stupid tubes where the valve hadn’t been screwed in properly at the factory, so after pumping it up the valve insert came unscrewed as I unscrewed the pump! I tightened it up and did it again.

Eventually I continued riding. I heard another car. Still no road was forthcoming! I thought to myself that if it comes to it I’ll carry my bike on my shoulder up through the woods to the road! Then I saw a sign – at last! 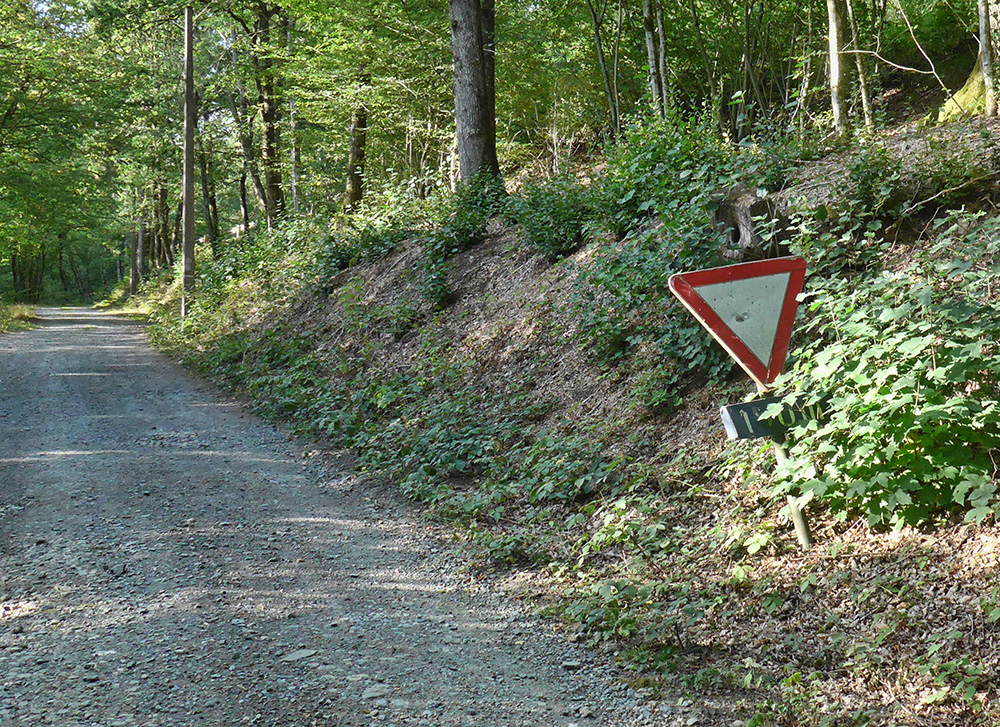 Fifty metres further on I rejoined the real road. The road was a lovely descent next to the Semois river. 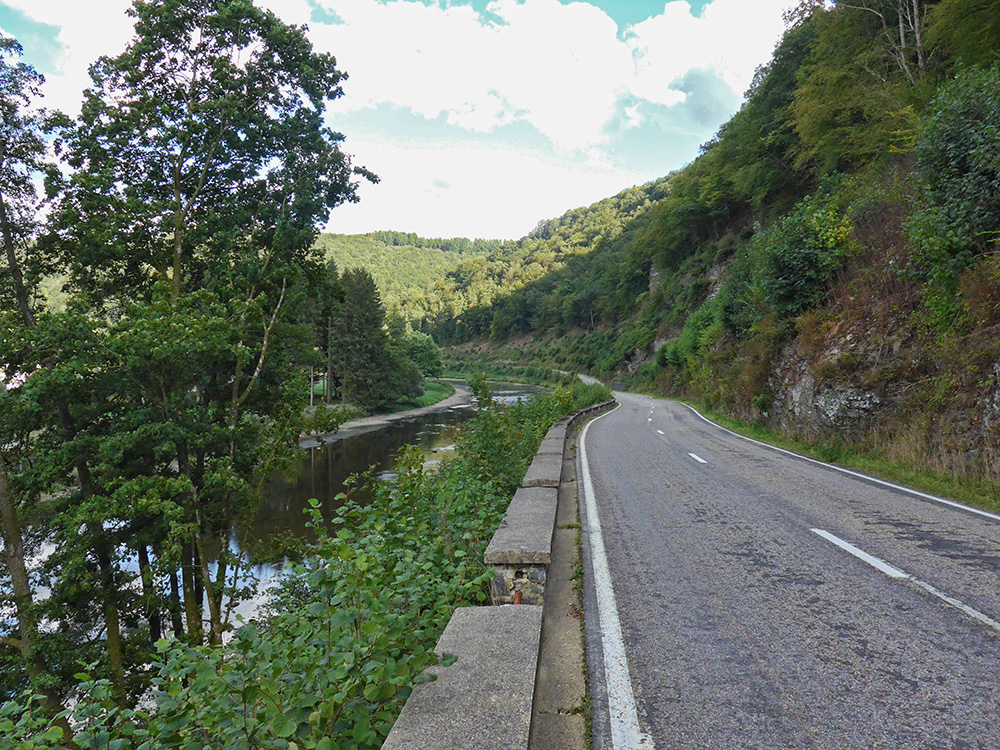 And then – what’s this I see? Some motorhomes on the other bank 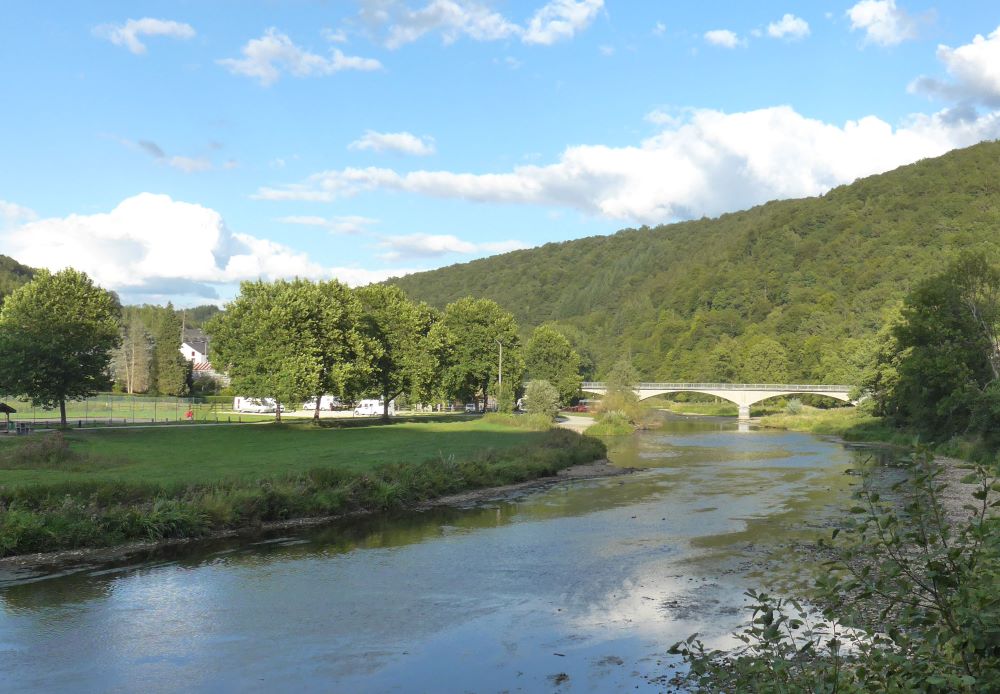 That could be a useful place to park I thought, especially as the campsite I had in mind was not open. Over the bridge, I rode down to where the vans were and sure enough it was a parking spot for motorhomes. Yay!

The remainder of the ride was a climb back to Rochehaut, where I was parked. On the way there was another view of Frahan, from a different angle. 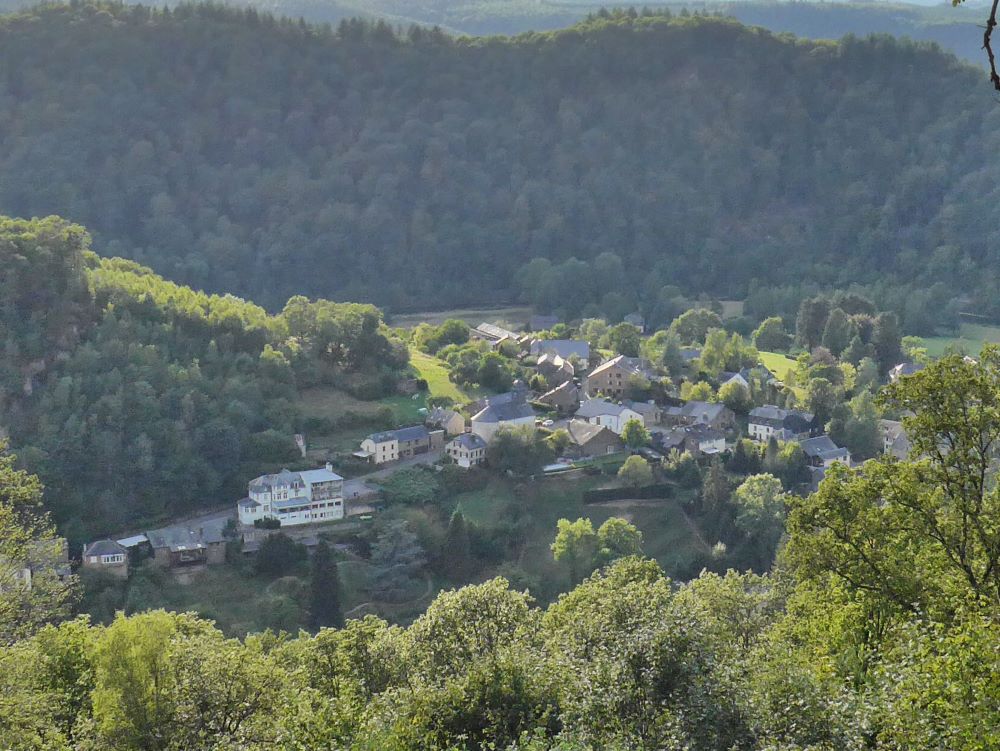 Also on that section the Garmin once again indicated that I should take a forest trail – no f*cking way! I thought to myself!

When I got back to my van I hurriedly packed everything away and drove to that spot I’d seen by the river before it got dark. It was amazingly peaceful there. So everything worked out OK in the end! 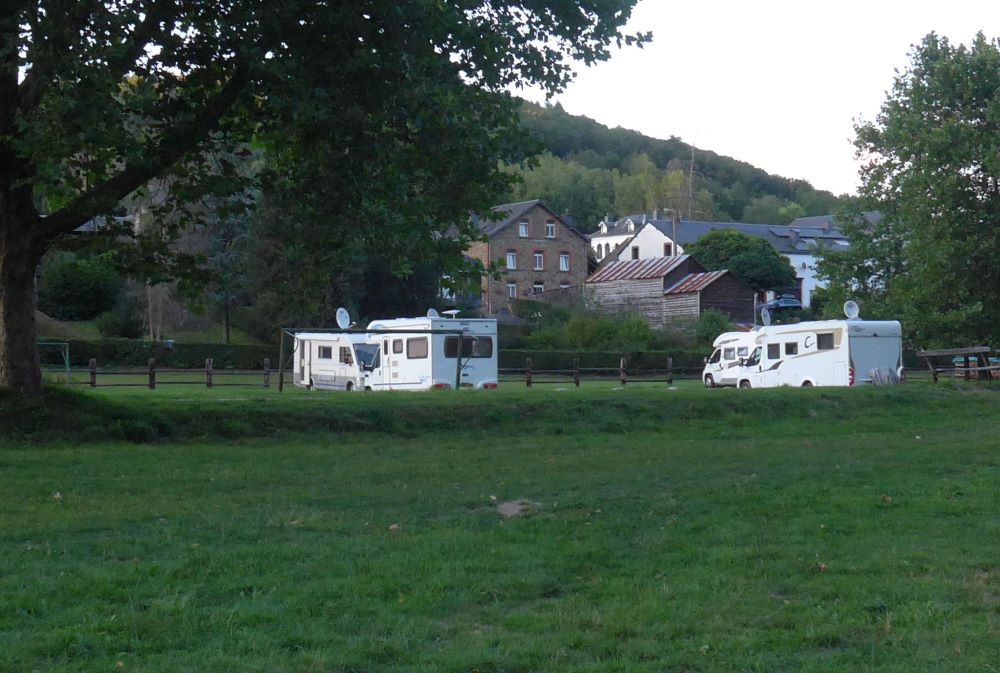 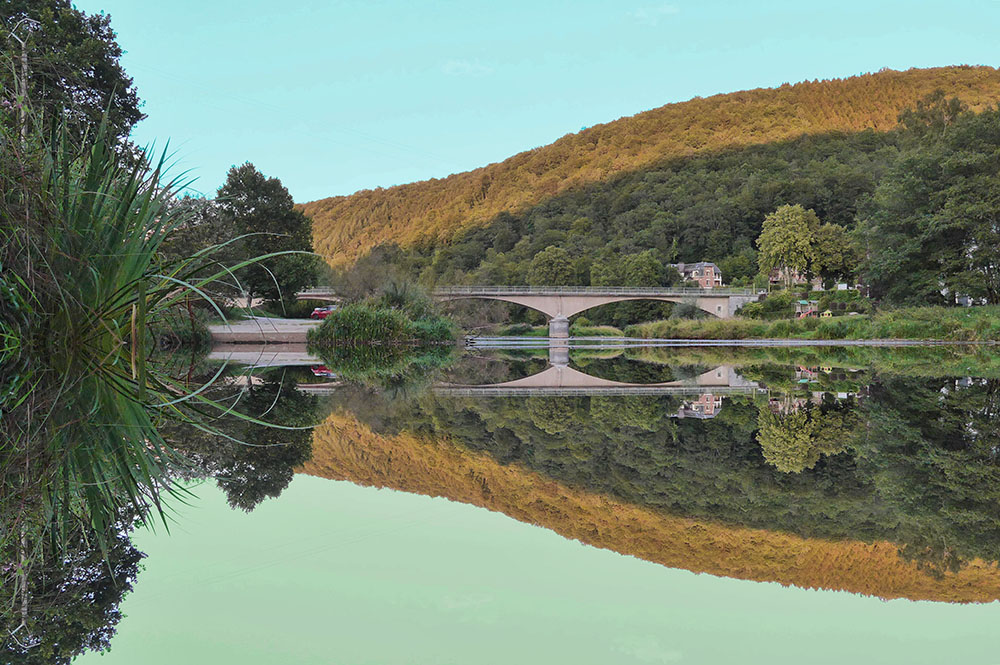 One Reply to “Ardennes Adventure”