What was I thinking? Looking at this route beforehand, I was confident that I could easily achieve the 15.5 mph average required for a Gold time. After all, I got 16.2 on my last one. I think it was the lack of any really tough climbs that lulled me into a false sense of security, but now when I look at the elevation graph it’s easy to see that it never lets up – you’re either going up or down; there are no flat sections.

We were really lucky with the weather. It was glorious sunshine for the whole ride, in stark contrast to heavy rain the day before, the rain only having let up a few hours before the event. So the road conditions were bad, to say the least. More about that later. The temperature ranged from 5°C at the start, to 9°C at the finish, but felt much colder because of a cold westerly breeze.  The event started from the show-ground at Detling, and the car park was like a mud bath. Registration was painless, and soon I was in the queue with other riders waiting for the ‘off’. The first three miles of this sportive were down a single-track path that was covered in debris and potholes; we had been asked to keep to single-file for this bit, so we all made our way along it fairly cautiously. This was frustrating, as I like to get straight down to business right from the start. Also the inactive rolling down the hill resulted in frozen hands!

The required average speed for gold was 15.5 mph, so I had a target of 16 mph in mind, just to be on the safe side. By the time 24 miles had been covered, my average was 16.6 mph, so it was looking OK at that point. I decided not to stop at the first feed station at 27 miles – I still had plenty of juice and energy bars on me. 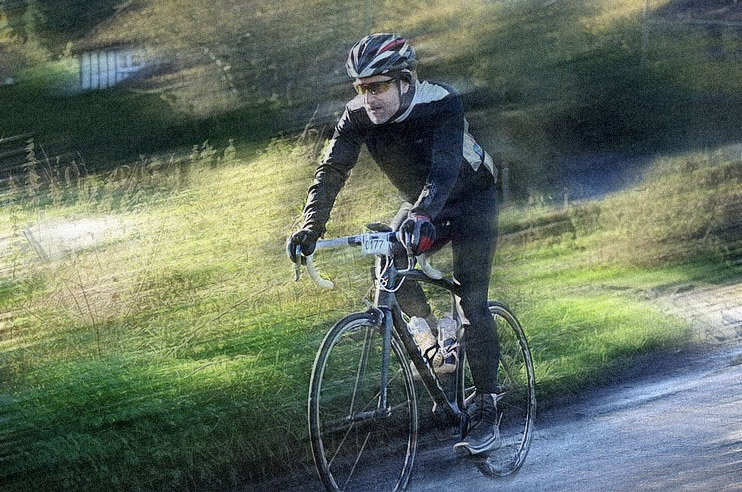 By the halfway point at 43 miles my average had dropped to 16.1. It was on a downward trend and no matter how much effort I put in I wasn’t able to recover it! The second feed station was at 55 miles at which point the terrain was getting distinctly ‘lumpy’. I stopped for a water top-up and a piece of flapjack which I scoffed as I rode away. My average was now 15.7 and any hopes of Gold were fading away. Indeed, at this rate, I would struggle to hang on to Silver! The problem was the road conditions. They were so bad that there was no way to gain from the descents because it would have been too risky to go fast. In all the sportives I’ve done, never have I seen so many riders at the edge of the road fixing punctures! We also went through 4 or 5 totally flooded sections of road. And we had the wind in our faces for the second half. All this conspired against a good average.

The last 5 miles or so were a long slow trudge up to to the top of Detling Hill. By this time I’d had enough and the road seemed to go on forever! Eventually I saw the Wiggle flag indicating the end. “Thank f*ck for that” I said, under my breath. “My thoughts exactly” said the equally weary rider next to me! My average in the end was 15 mph, enough for Silver.

The next time I see an event that’s categorised as 5/5 for difficulty, I’ll take more heed. I found this one really tough-going.

A couple of things have transpired post-event:

750ml + 610ml bidons were enough for 80 miles
Obviously that was under cold conditions. Although I topped-up water at 55 miles, I never used any of it! I was OK, hydration-wise, post event.

Shimano Di2 woes
On this ride my Di2 developed an issue whereby it would jump out of first gear, into second, which is not what you need when you are climbing a steep gradient. I seemed to be able to keep it in first by repeatedly operating the lever. I think it just needs re-calibrating.