Really I have James, a fellow club member, to thank for alerting me to the ‘Cyclotour du Léman’. I had never heard of it until he mentioned it in an email to us all. It sounded like a great idea, and with the aid of my motorhome I was able to do this event and several other amazing rides in the week following. I, and a friend, booked the event four months in advance. Three other club members and one of their friends made six of us that would be doing it.

We drove down as far as Troyes on the Friday evening, and then the remaining 230 miles to Lausanne on the Saturday morning. There was quite a bit of rain on the way down. We had to collect the mandatory event jersey from a shop somewhere in Lausanne. We got lost several times before eventually finding it. So we’d had an impromtu tour of Lausanne! Still it was raining off and on. We finally got to the campsite around 4pm, I think. In the evening we all had a quick drink at a café overlooking Lac Léman (aka Lake Geneva) to discuss tactics. 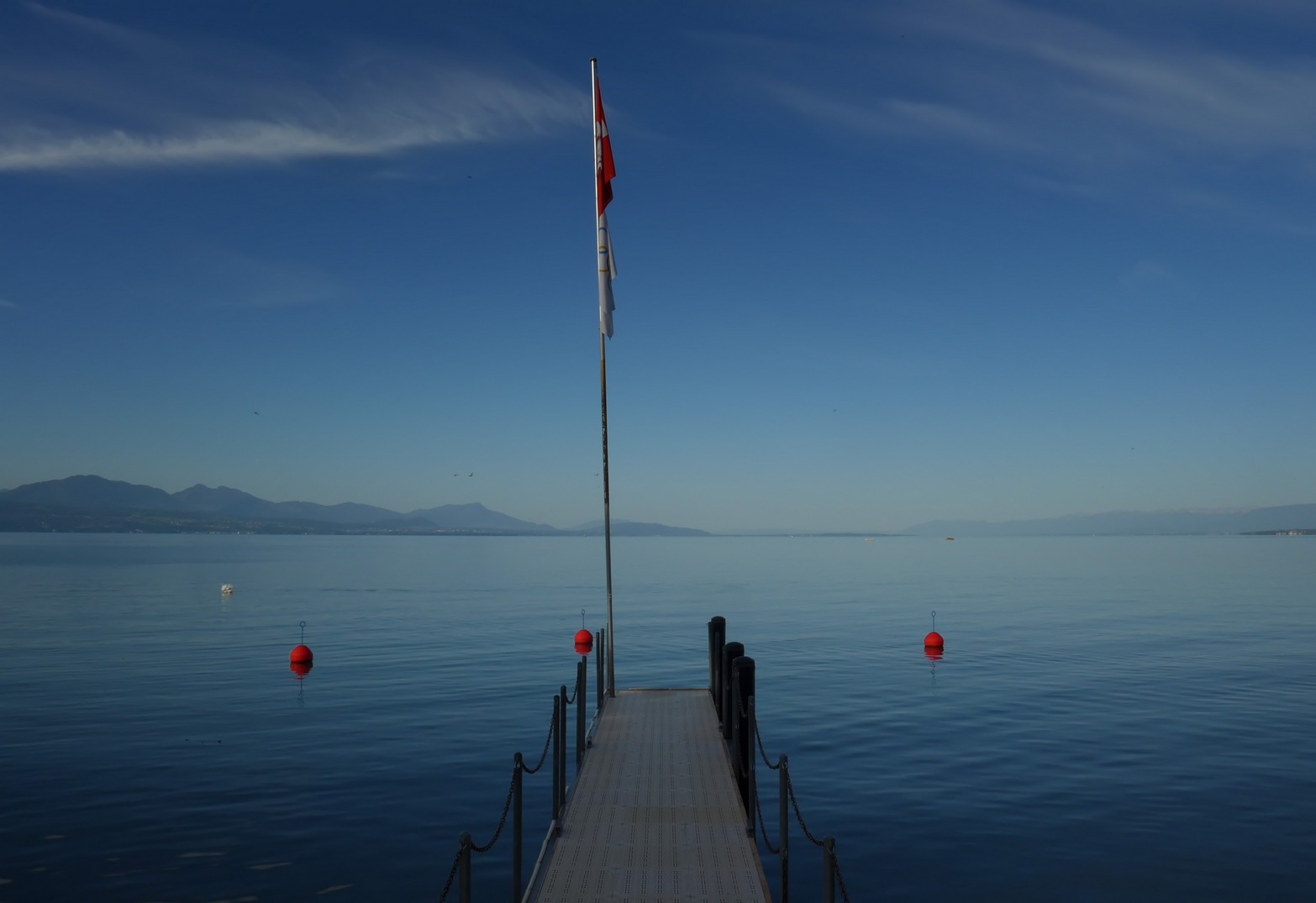 Some were keen on an early start – there was a ‘rule’ of this sportive that if you didn’t reach certain points around the lake by certain times then you would be stopped and taken back to the finish by truck! Whether this was actually implemented I have no idea. It seemed a bit draconian, but it was enough to convince some to start early. I didn’t really want to be up at the crack of dawn so I arranged with She(ila) that we start around 7:30. We even walked to the start (which was right by the campsite) and made a note of a particular lamp-post where we would meet in case it was difficult to spot each other among the huge crowds.

The following morning, we woke to a dry and not-too-cold morning (forecast had been 6°C). I decided to forego my shoe covers. We got the bikes ready… 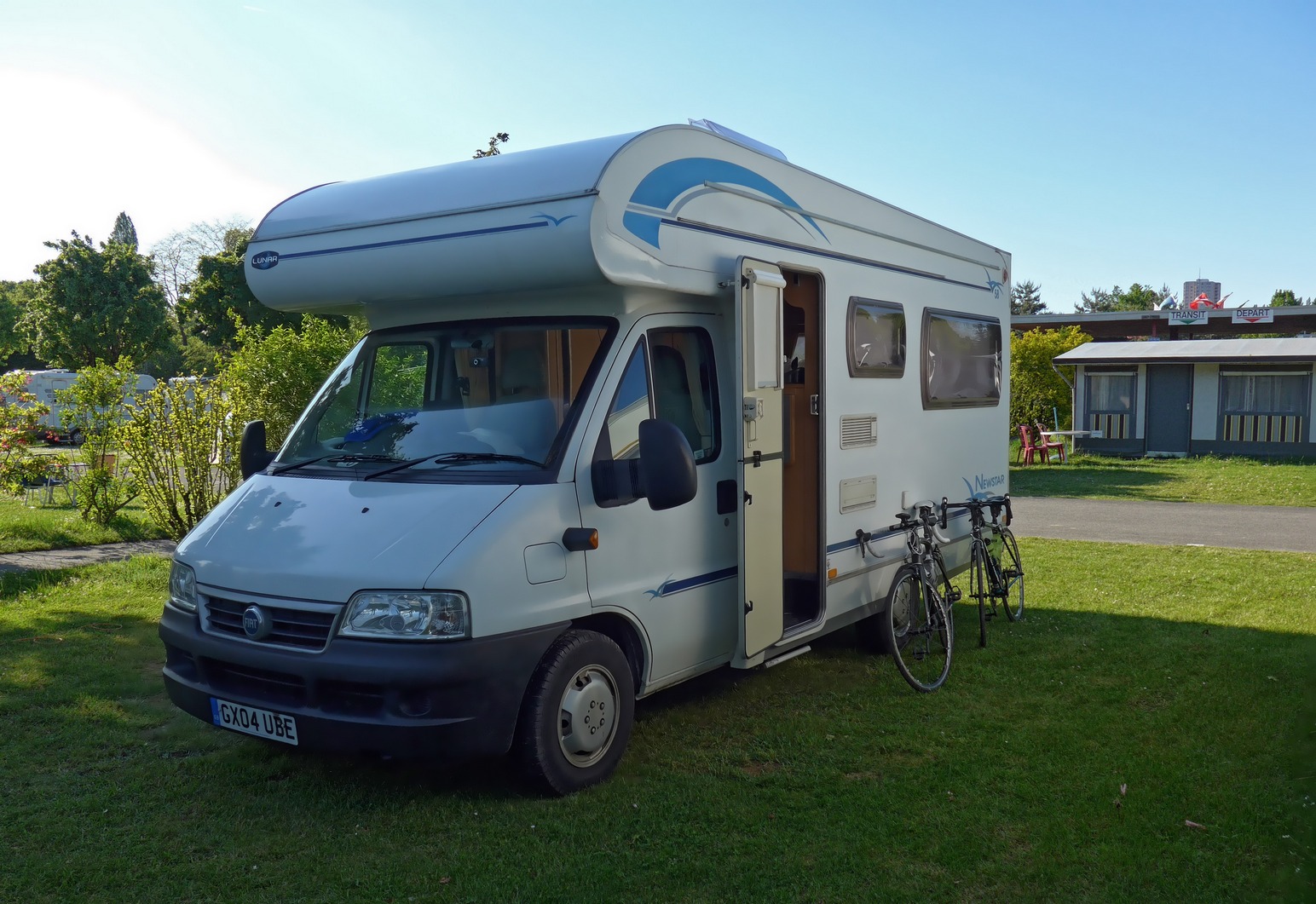 ...and made our way to the start. It wasn’t difficult finding She, because she was the only one there! The place was deserted. We wondered if we were too late, or even whether this was the actual start. 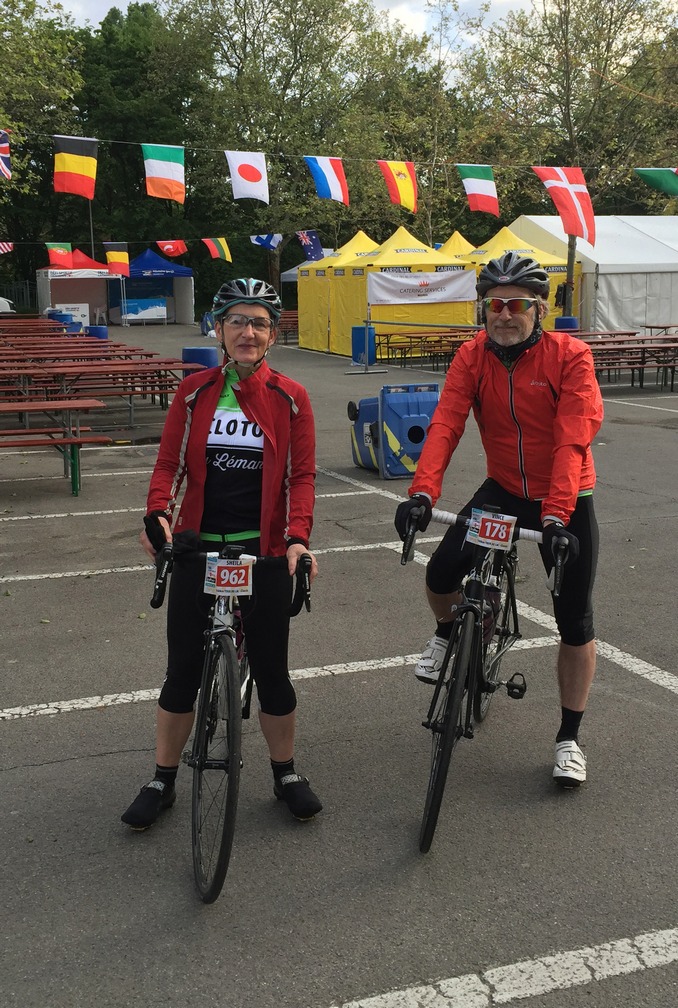 At this stage Anne, my friend, had decided not to do the whole 180k to avoid the risk of aggravating a recovering knee-injury. Nevertheless, all three of us started off together. We rode under the starting arch that would start our timers. At this point, workers were dismantling the barriers; further indication that we were late starting. Anyway we got to work. But not for long. 1.6 miles into the journey, Anne punctured. We tried to do the fastest tube change in history, but She’s CO2 inflator decided to spew its contents everywhere except inside the tyre, so we had resort to the mini-pump, which was a chore with the 28mm tyres (in fact my tyres) on Anne’s bike. Because Anne was using my wheels and tyres I felt somehow responsible for the puncture! 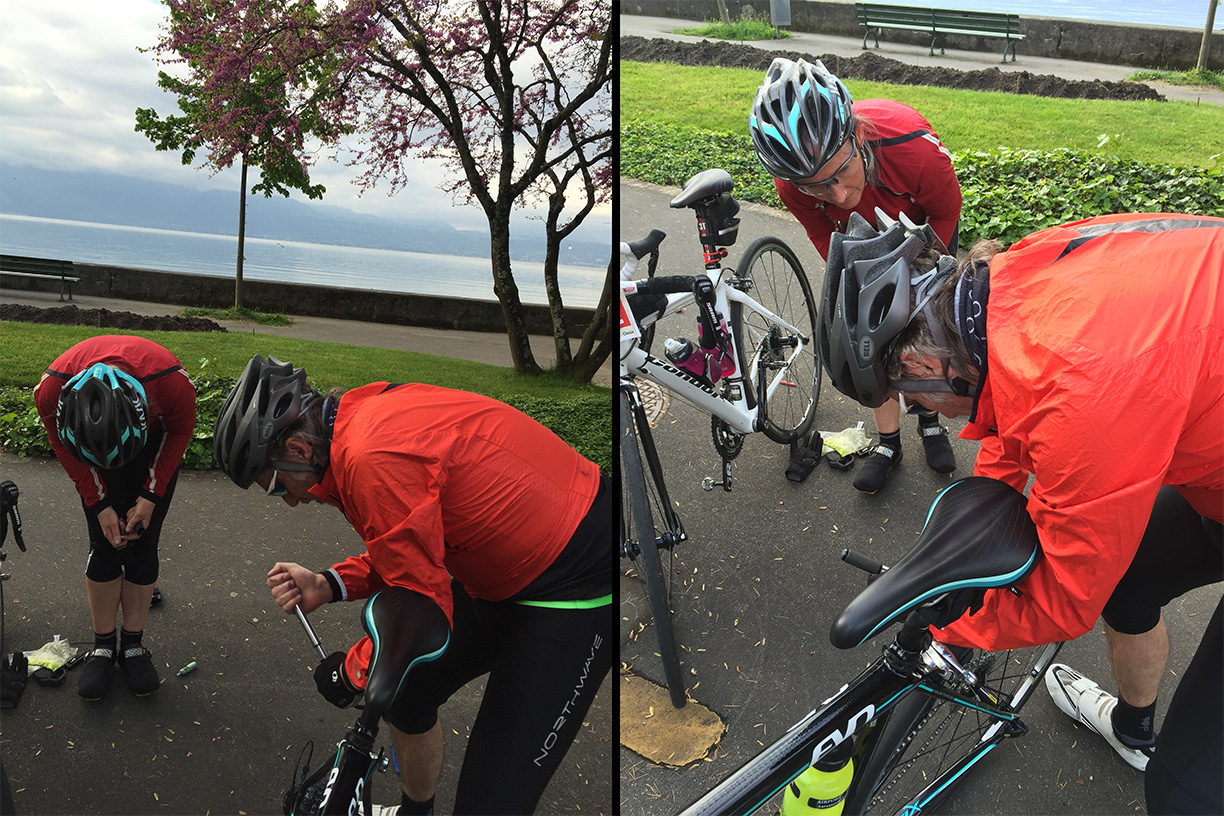 Twelve minutes later we were on our way again. Me and She pushed on ahead and left Anne to her own pace. I felt really bad doing this but Anne had insisted and we had all reluctantly agreed the previous evening.

The weather was chilly, greyish and with a frustrating headwind, as we made our way East along the north shore of Lac Léman towards Montreux. Across the lake we could see that the sun was shining. We also reasoned that the wind would be behind us over that side so we were keen to make our way around the eastern end to revel in the idyllic conditions we imagined awaited us there.

We kept thinking we were near the end of the lake and would be turning along the south shoreline soon, but the road started veering inland away from the lake. In fact, at three miles from the shore this would be the furthest we would find ourselves from the water’s edge. The reason for the detour was that the road had to find its way somehow across the Rhône River, which flows into the lake at this end and then exits at Geneva at the western extreme.

Once we did eventually start heading West, we were straight into a very stiff headwind! What! How does that work? we were thinking. We pushed on. Gradually it got warmer and sunny. We rode through attractive lakeside towns, the lake always nearby on our right and the mountains to our left. 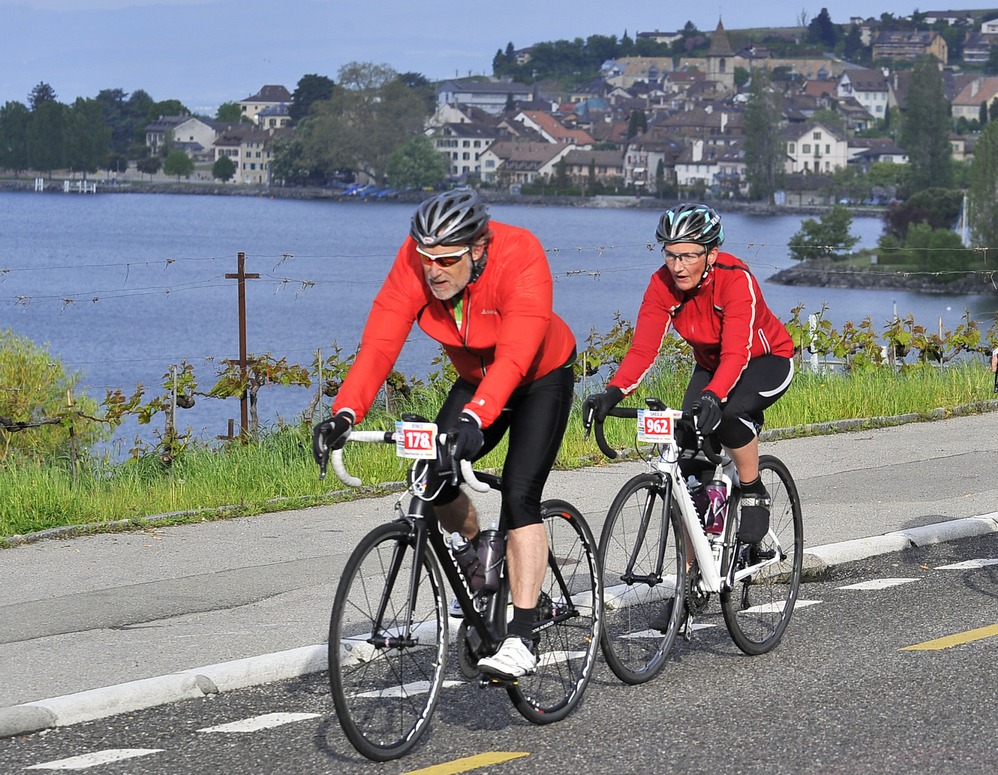 Just after Saint-Gingolph we stopped to get a photo and remove our rain jackets now that the sun was out. Across the lake we could see Lausanne, both our starting point and eventual destination. Even though I had promised myself that this would be a sight-seeing tour and I would stop to get lots of photos, typically we just ploughed on without stopping that often. 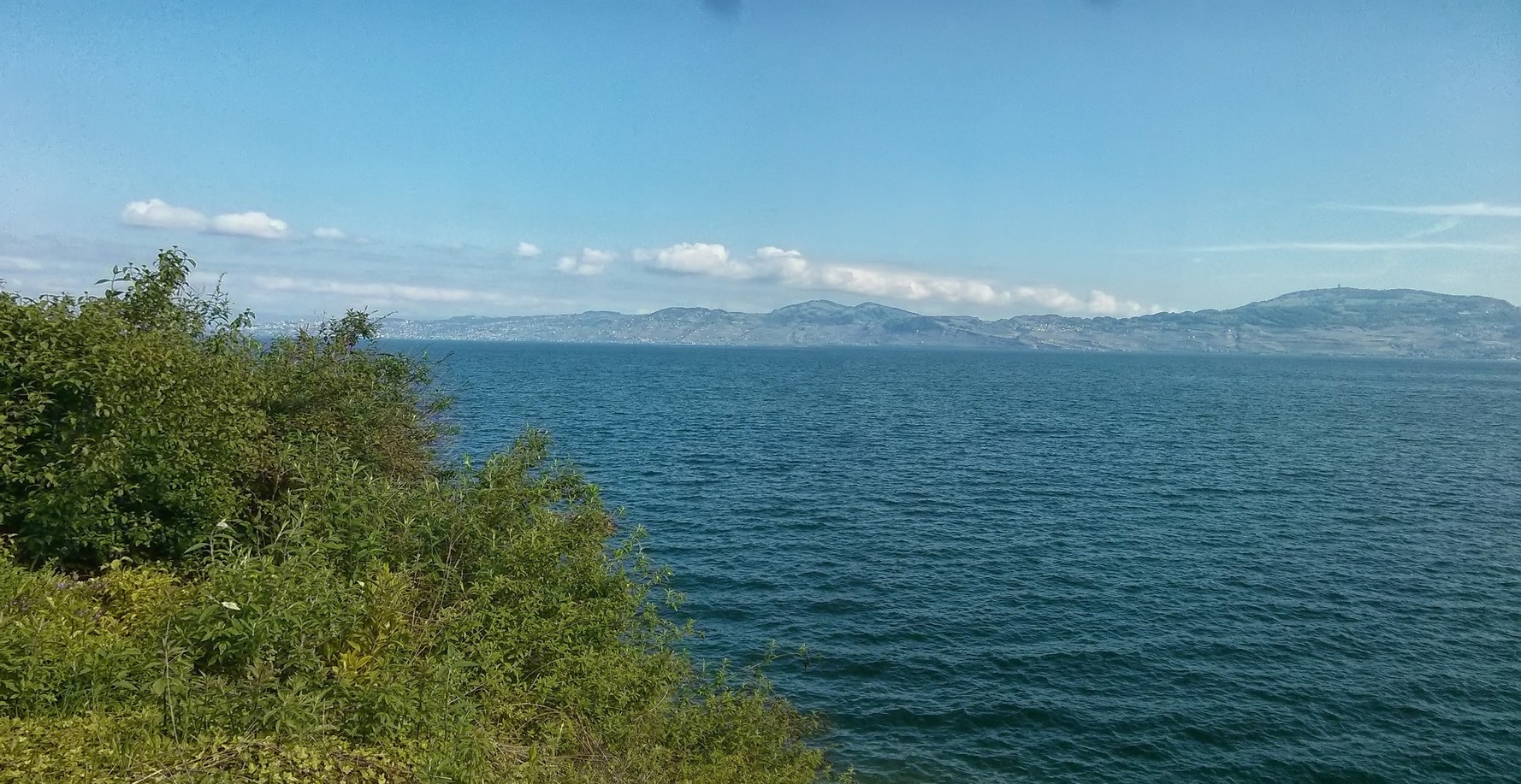 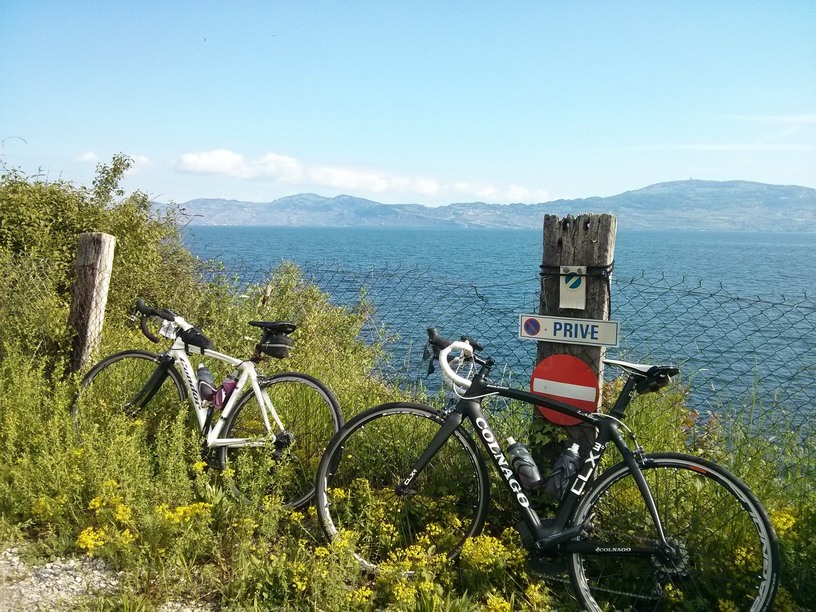 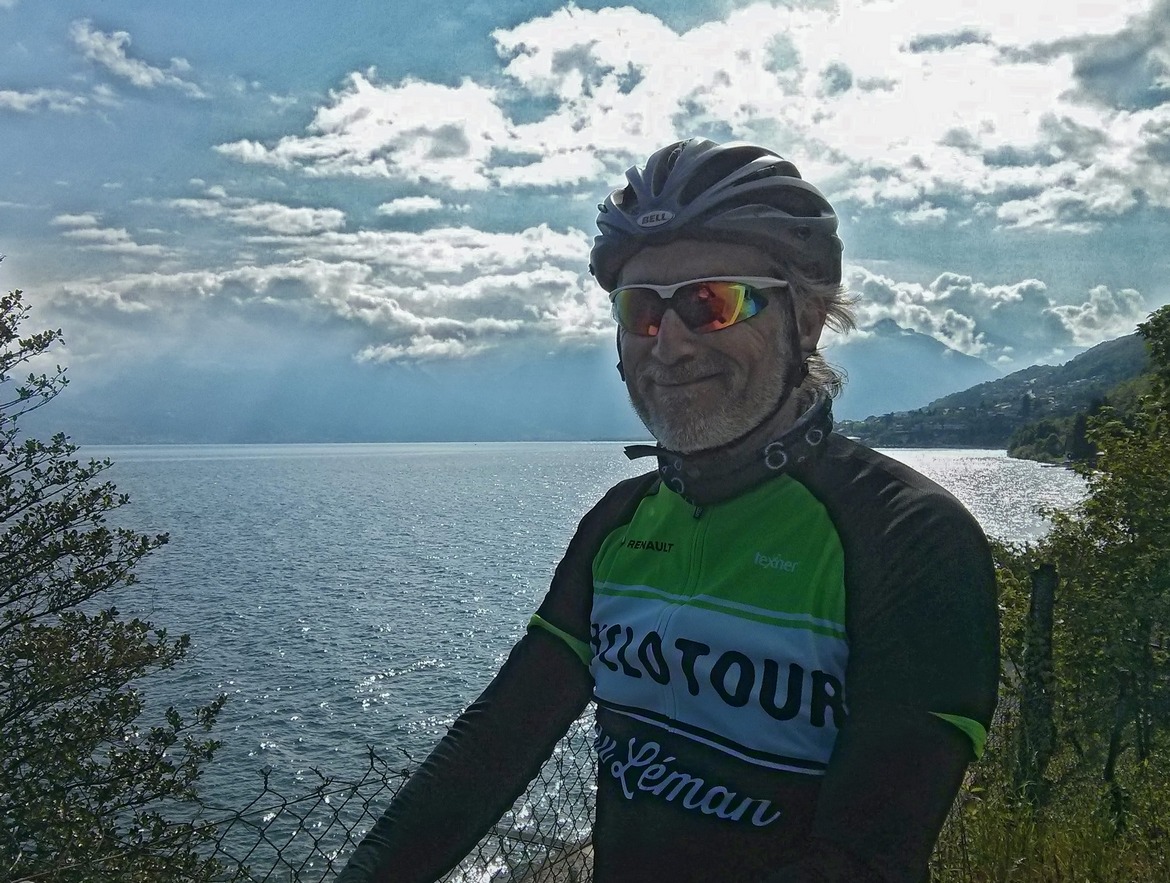 At the forty-mile mark we stopped at a feed station at Évians-les-Bains. Now we were in France. At the feed-stop we were greeted by the mellow sound of a duet of Alpine Horns! 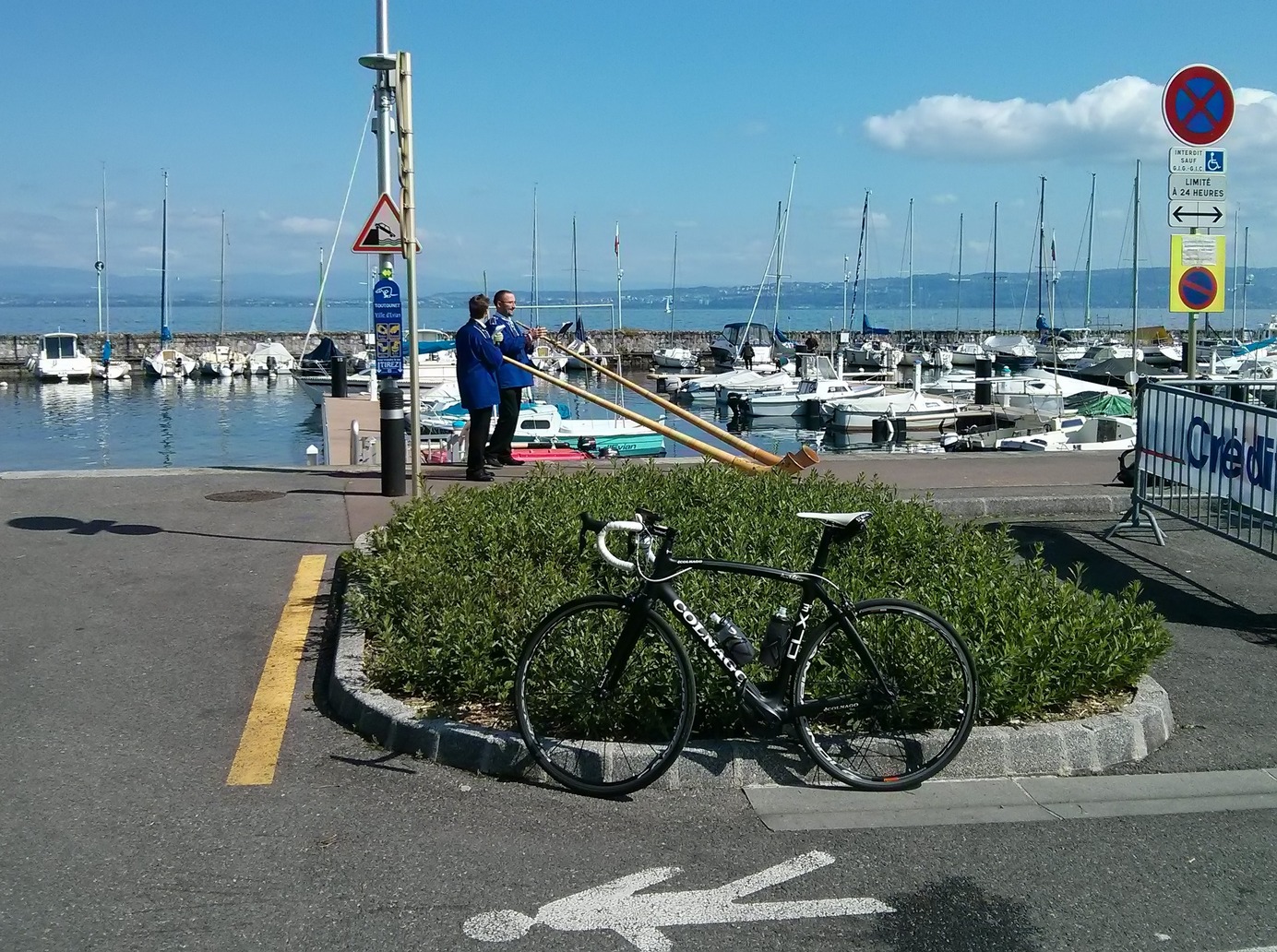 I picked up a very tasty banana-flavoured energy bar, which I subsequently looked for at all other feed-stops. Even though it was sunny I remember thinking that my feet were cold until we reached Geneva. All the time we were riding we thought we were riding into a headwind, but every time we stopped, there appeared to be little wind. So we concluded it was merely our speed that caused the headwind! On the smooth flat roads we were travelling predominantly at between 18 and 20 mph.

At various points we had other riders hanging off the back of us. Quite often they didn’t seem to want to contribute by doing a stint at the front, although one guy helped us approach Geneva at a brisk pace, covering the 10 miles in 30 minutes. 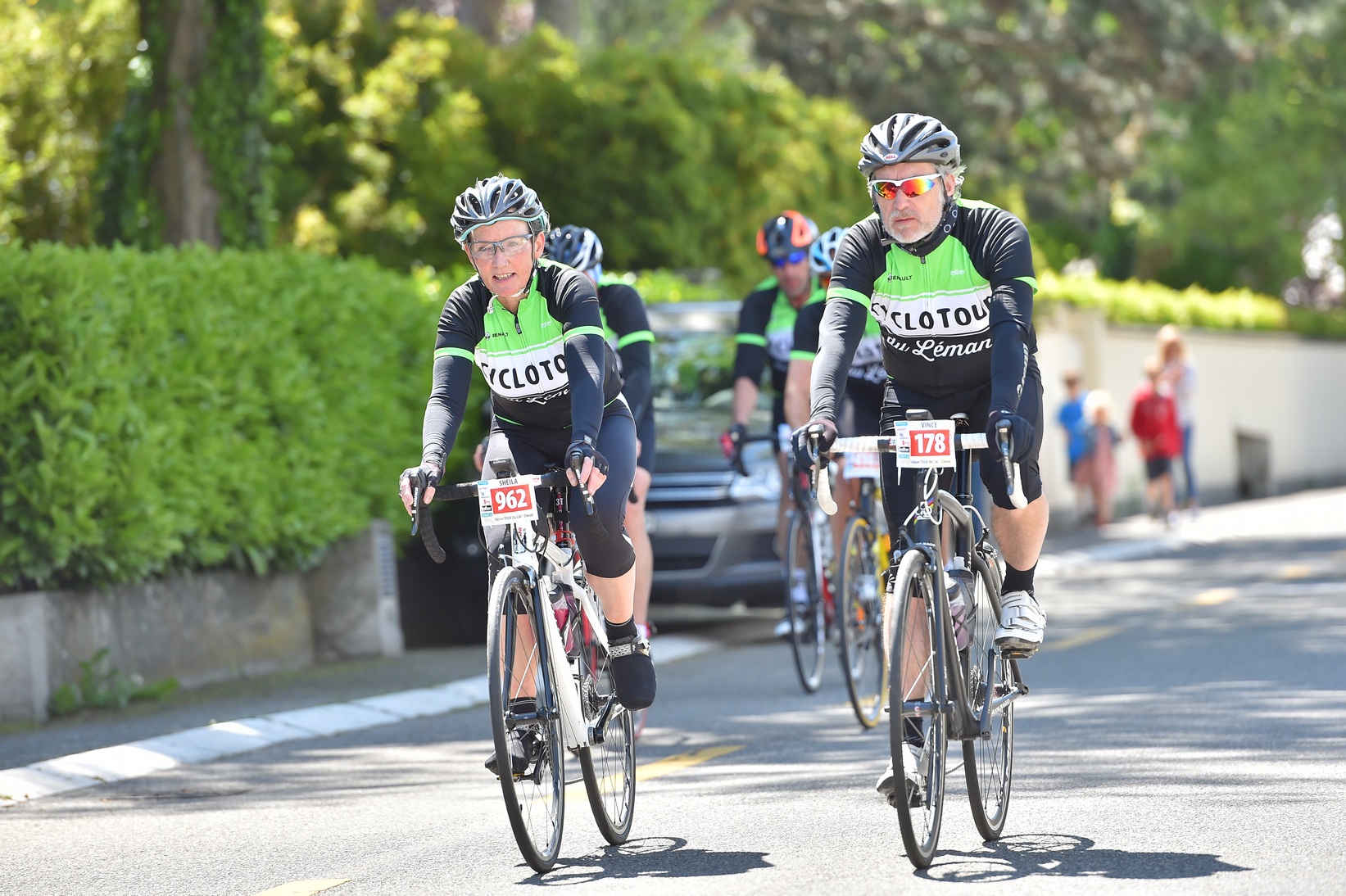 Traffic through Geneva slowed our average. We opted to miss the feed-stop at Geneva. That was also the finish line for some riders. We were now on the final leg as we turned back along the north shoreline towards Lausanne. 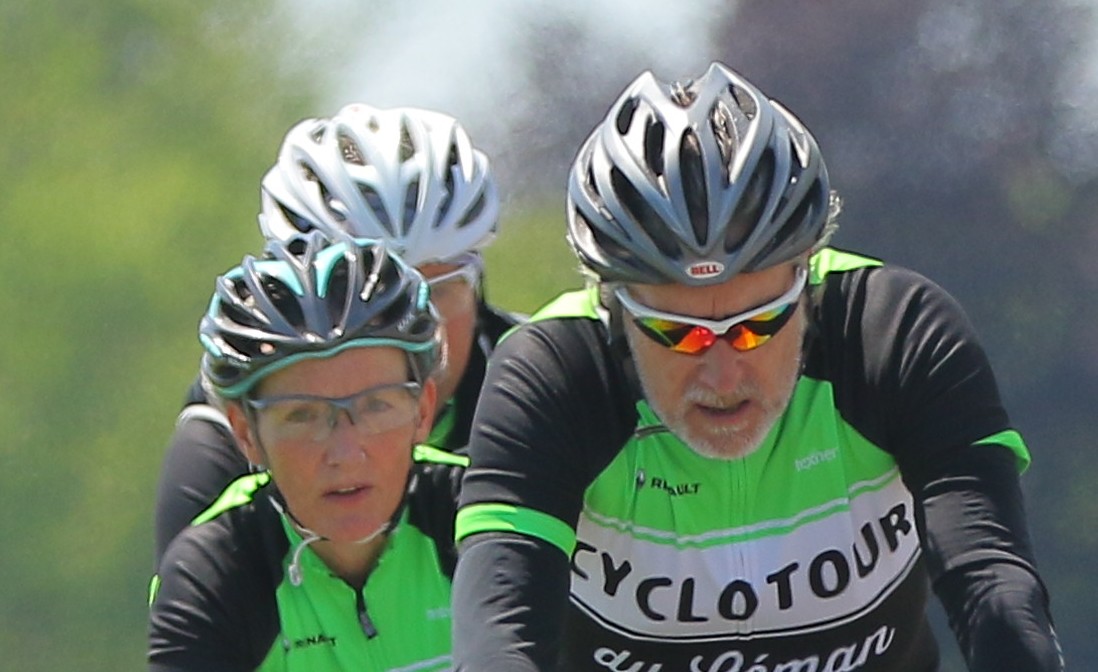 We took the pleasure of a leisurely stop at the last feed-stop, about 23 miles from the end. With an over-abundance of sugary foods inside us, it was good to grab a couple of cheese rolls! For most of the rest of the ride we had a rider off the back of us who would not help out at the front. 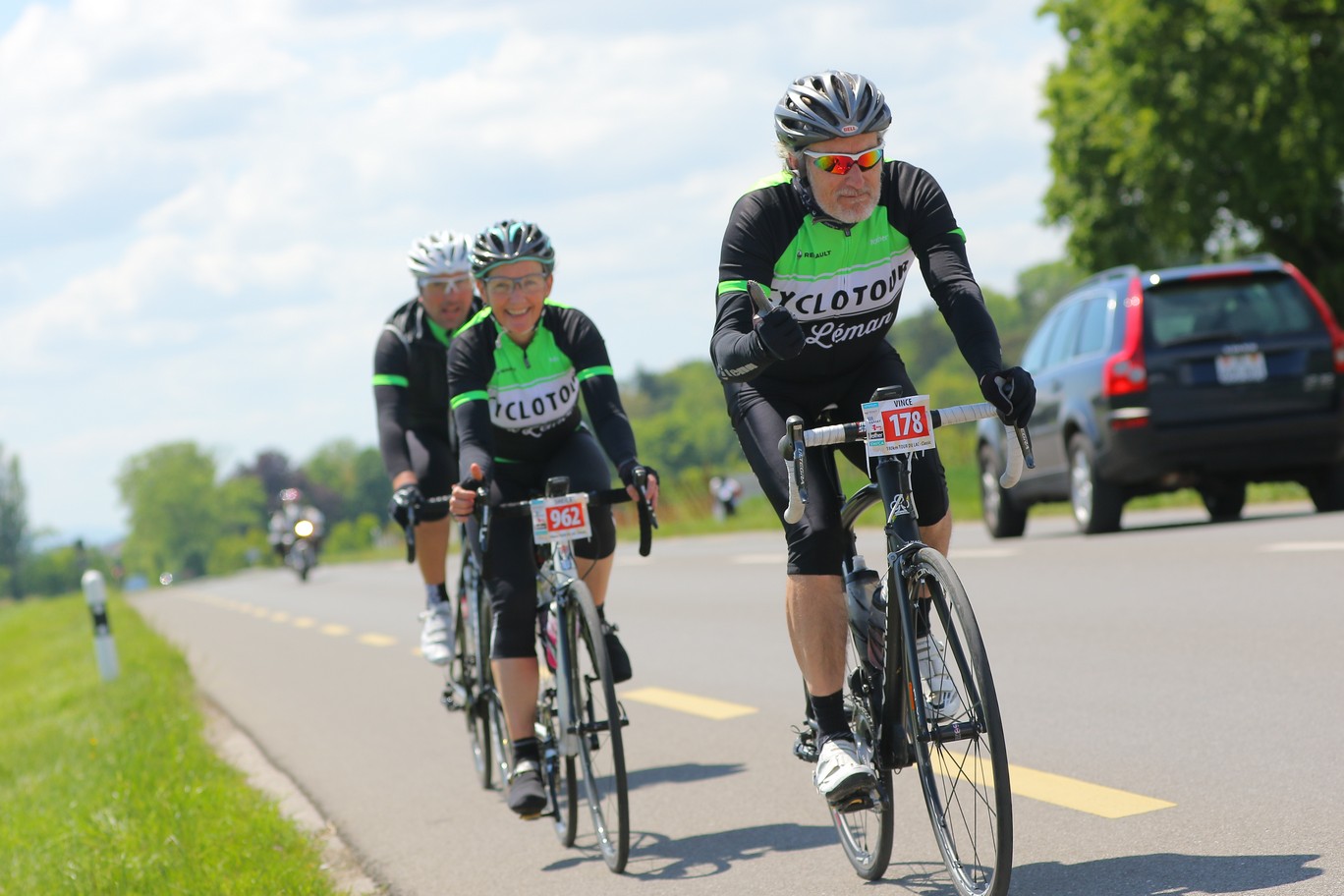 Eventually we were on the outskirts of Lausanne. As the pace increased towards the finish line, we were determined not to let this clinger-on beat us. He tried to get away a couple of times but we hauled him back in. There was lots of technical riding as we darted on and off the cycle paths, up and down pavements, sometimes splitting the three of us into separate groups. As the finish line loomed we put in a final push and beat him to the line. 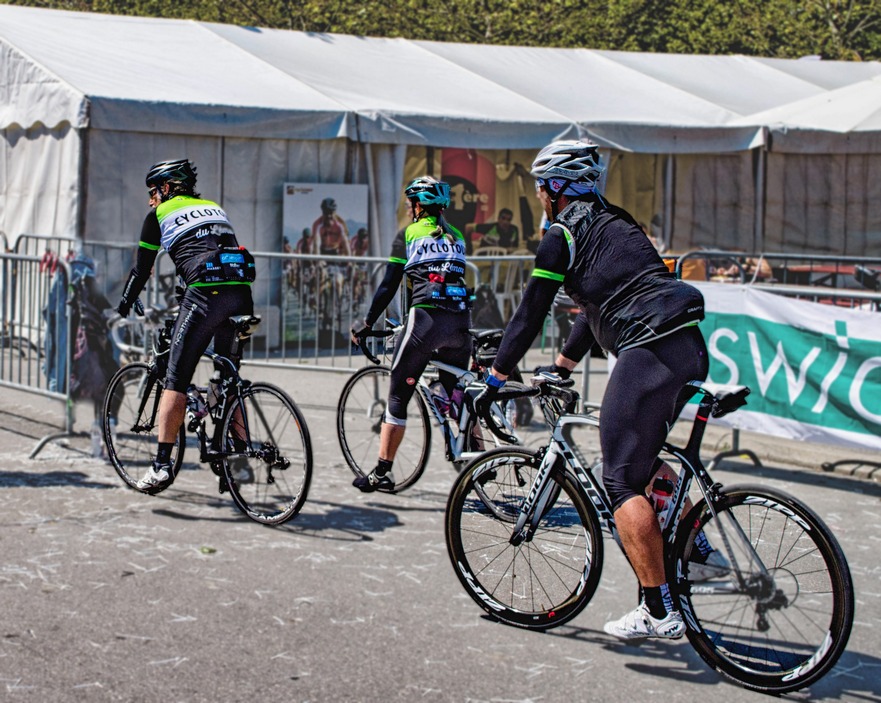 Anne was already there at the finish line, having completed a shorter knee-friendly route to Évians-les-Bains. 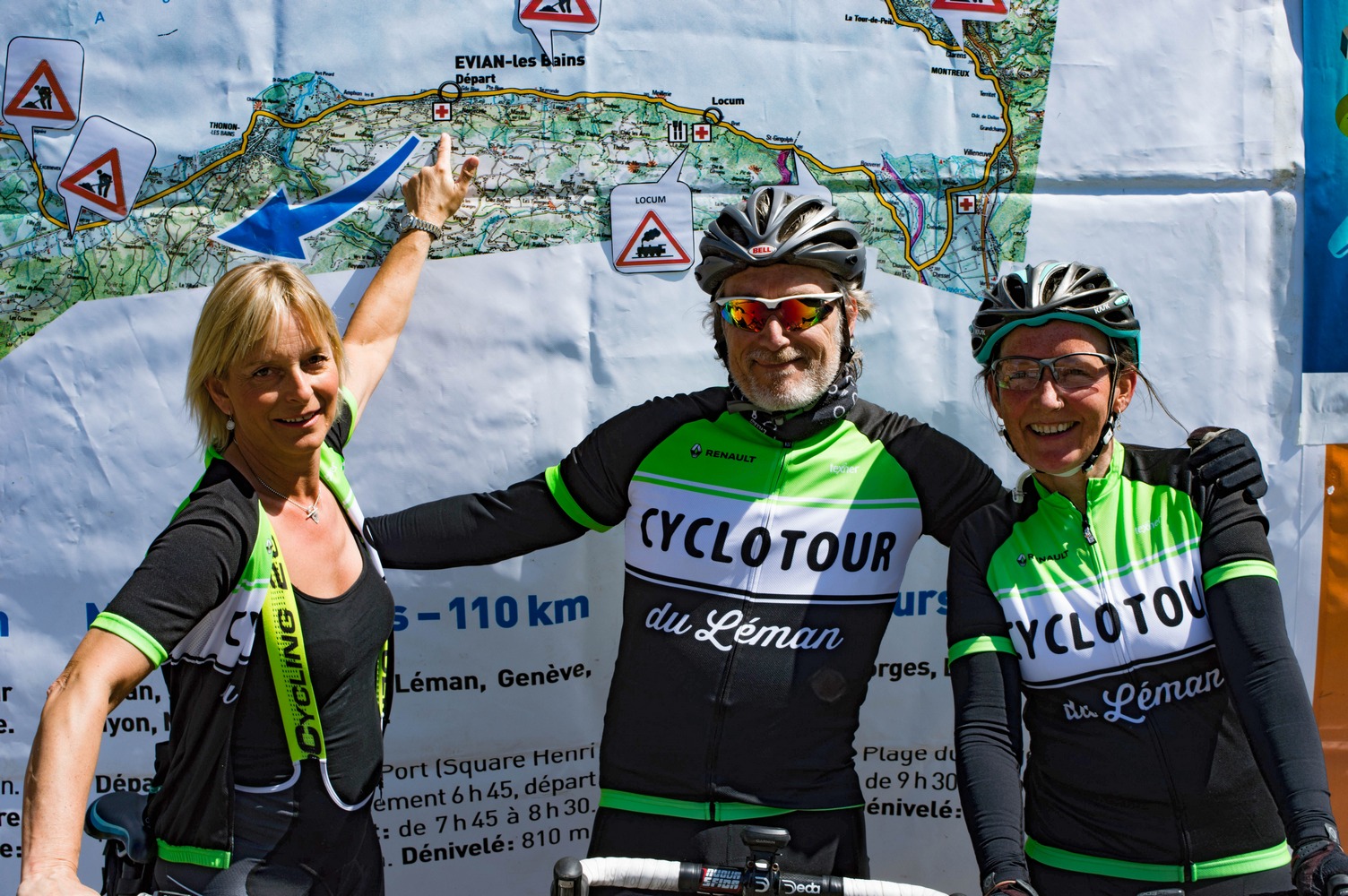 By now it was a glorious afternoon and we sat in the sun chilling out and discussing our adventure over a well-earned bowl of pasta and cups of coffee. 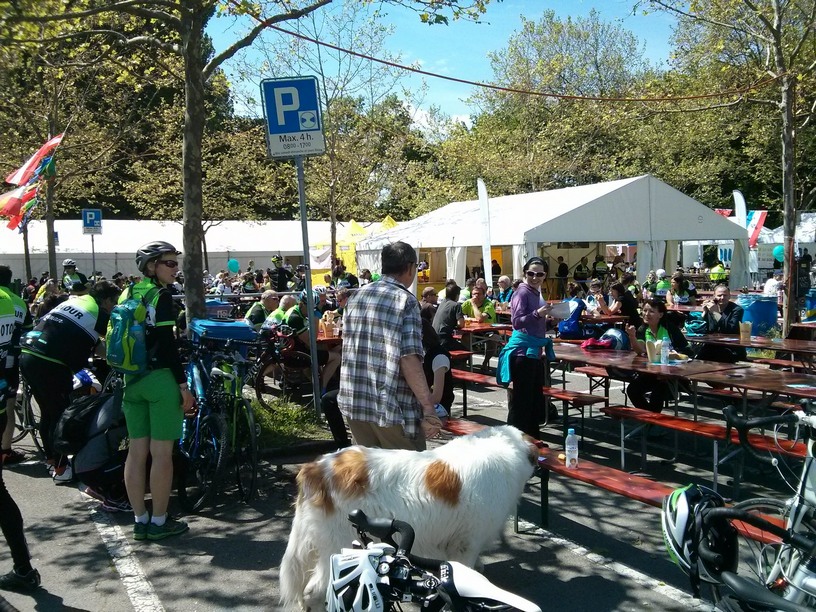 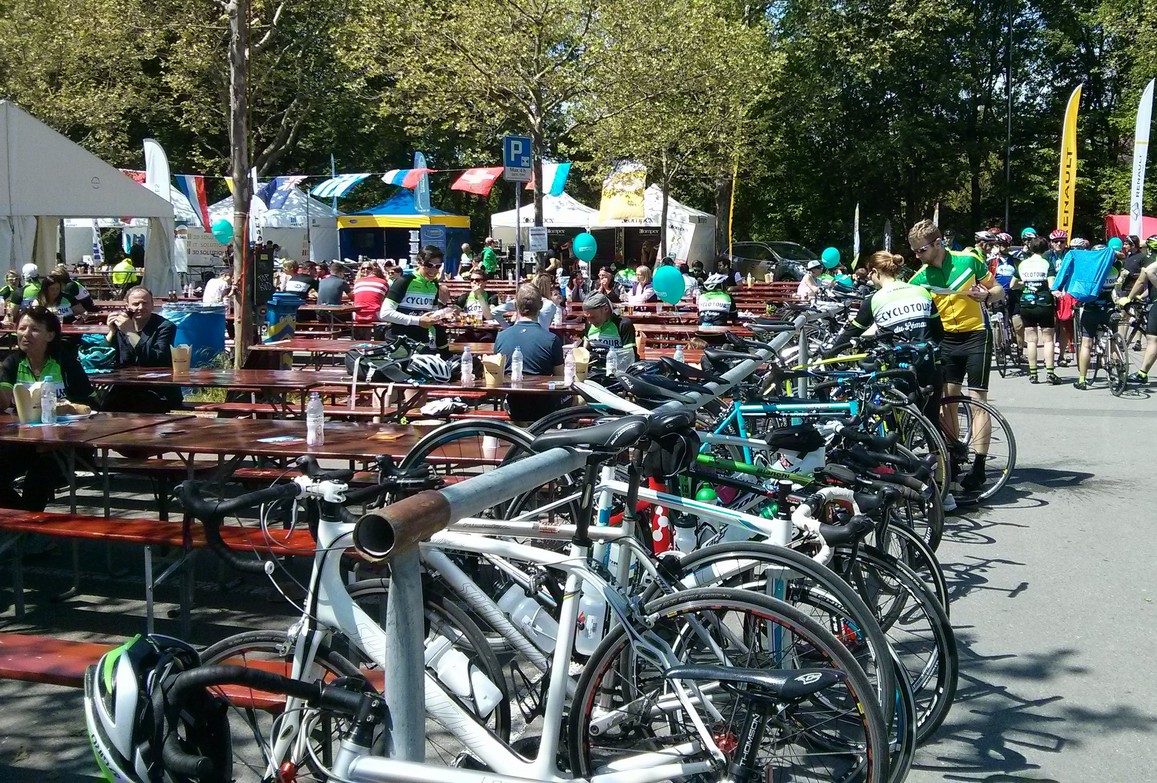 We didn’t see any of the rest of the group until later that day. And ironically we never saw James at all, the whole time we were there. It had been a really enjoyable event and we had lucked-out big time with the weather. Me and She’s average was 17.7 mph, which we were pleased with considering the built-up areas we had encountered. That’s another 2016 goal of mine achieved.

And the photo-of-the-day award goes to Anne: 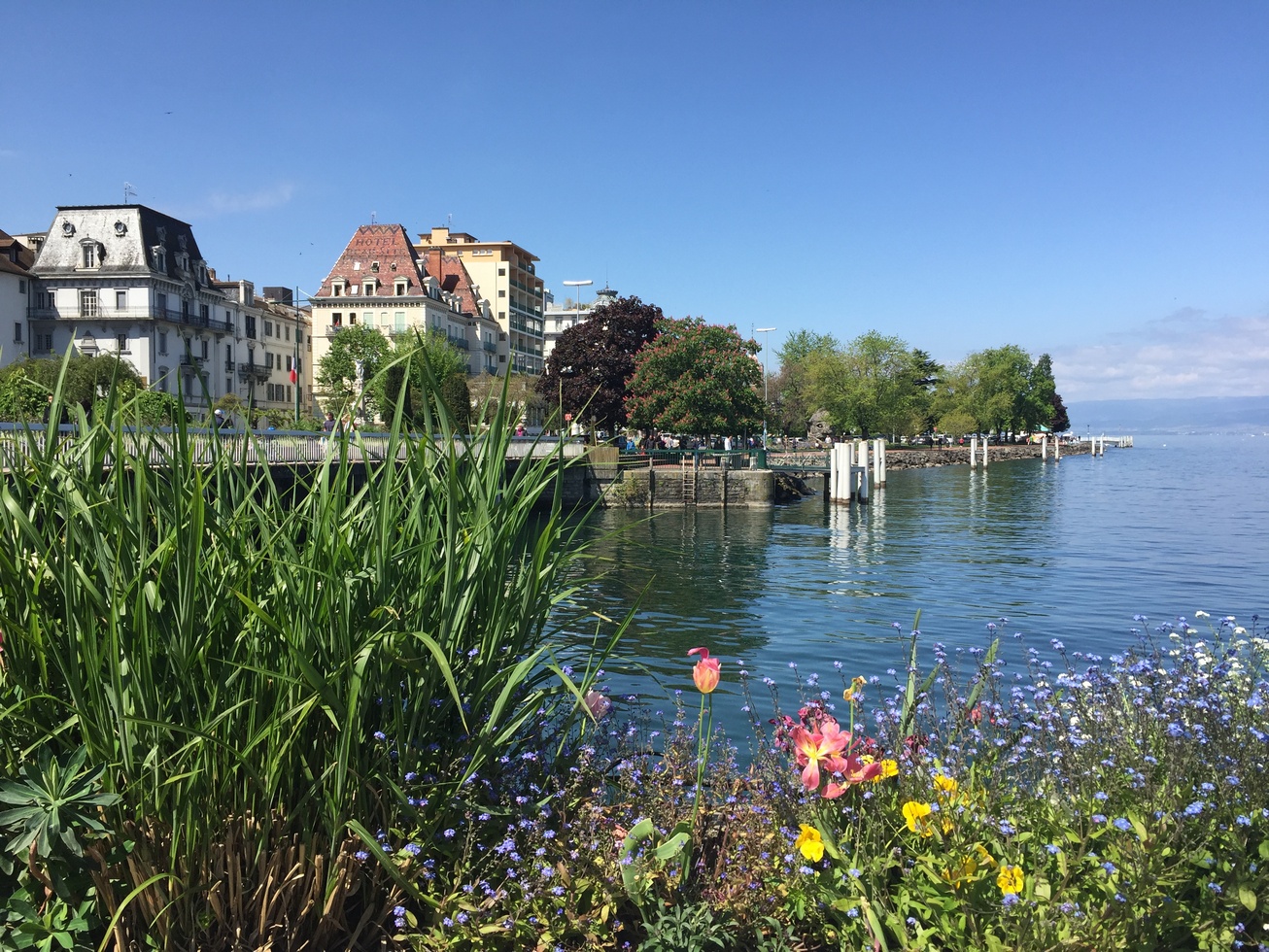