A group of us from the club decided to enter the Kentish Killer sportive. There were a couple of hills in there that I’d never climbed before, so three days before the event I went out on the following ride to check out Hubbards Hill and Sundridge Hill:

They were both quite tough. Hubbards is like an optical illusion. The road looks relatively flat, probably helped by part of it being a bridge across the A21. You don’t expect a bridge to have a gradient of 12%! This is what it looks like from the road passing under it: 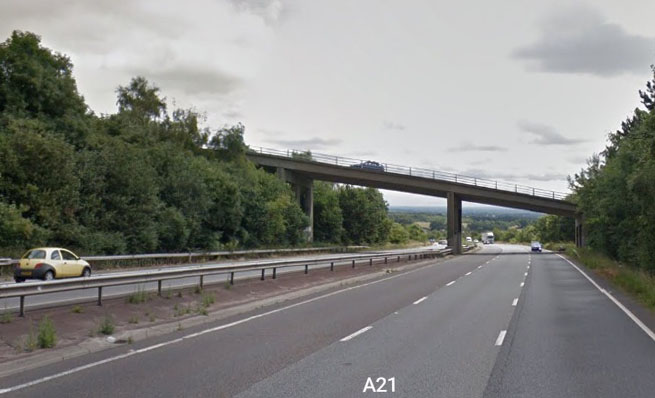 So Hubbard’s is a deceptive slog. Sundridge is about the same length, but has a steeper section of about 15% in the middle. I had pencilled in Row Dow on this test ride, but by the time I came to it I thought that I had better save some of my strength for Sunday, so I rode right past!

It was never going to be easy; seventy miles with a serious collection of hills totalling over 6,000 feet.

Come the day of the actual event it was cold at 3 or 4°C with a chilly NW’erly wind which threatened to make the second half of this ride a real challenge! I drove to Brands Hatch motor racing circuit for the start, arriving there at about 8:15. There was fine rain in the air to add to our woes! I met four others in the Kentagon and after sticking our numbers on our bikes we set off at about 8:50.

Our plan of staying together for the ride went straight out of the window within the first couple of miles when one rider pulled out ahead. So we were down to four. One of us had made a list of the hills and at what distance they came, so we kept checking with him “how far to the next one Steve?”. It was cold but after about half an hour we began to warm up. The first big hill was actually a descent – of Exedown Road. 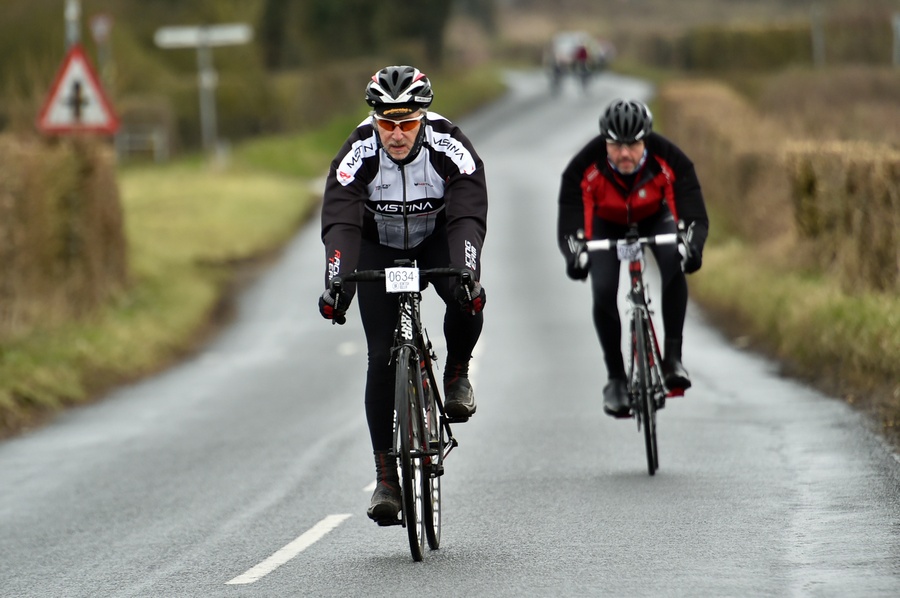 A short climb through Ightham was followed by a few easy miles to the first big climb of the day at the 12-mile mark – Carter’s Hill. I made it to the top first, and waited to re-group. Just a couple of miles later was the fast descent of Riverhill and then on to Horrible Hubbards. This time I wasn’t the first up, but once again we all regrouped and carried on together.

Another steep descent (Baileys Hill) was followed by an easy 15-mile section out to the long climb of Black Hill. We were pretty-well still riding together at this point, but became separated over the course of the three-mile climb. Just past the top of Kidds Hill I stopped and waited for the others. I was joined quite quickly by Sheila and we waited for the other two….and we waited….and I glanced down periodically at my Garmin to see the average speed dropping… and we still waited. We kept spotting riders in red jerseys coming round the bend – “is that them?”, “no”. How long should we wait, we wondered. Then Sheila said “if the next rider that comes into sight is not them, we’ll go”. So we waited…. and no riders came into sight for ages. When they did, it still wasn’t them, so we set off without them. We had waited there for five minutes! (Later, we discovered that they too had stopped, about a mile further back, which is why we hadn’t seen them). 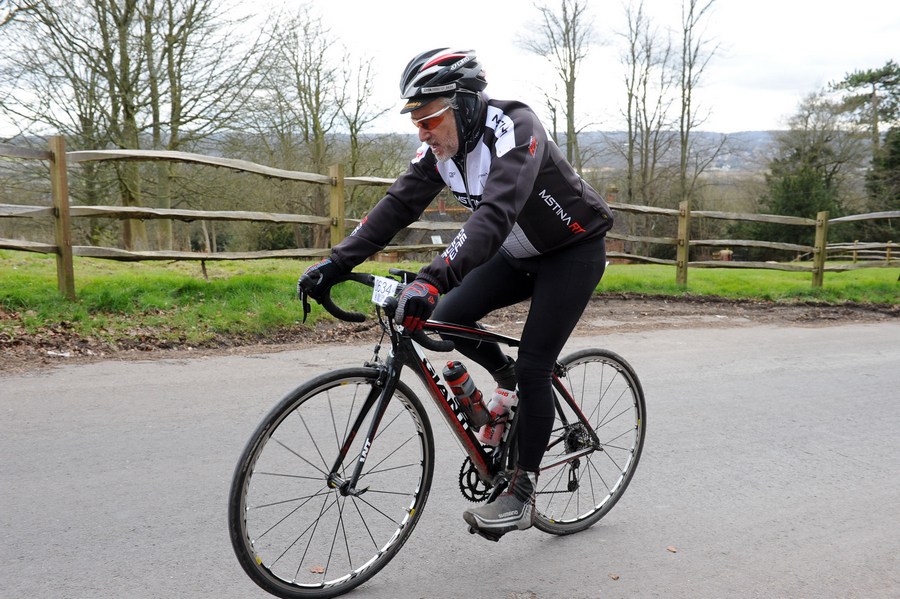 We went straight into a 2-mile descent. Even though I had ascended Black Hill feeling pretty strong, it was over the next relatively easy eleven miles when I began to flag. Sheila was doing most of the leading and was really dragging me along. Eventually I said to her that she should go on ahead, alone. This was just at the foot of Ide Hill. She pulled away ahead and I plodded up that relatively easy hill, at the top of which was a feed station. By this time I had given up all hope of a silver medal so I took a leisurely 11-minute break at the stop and had a large flapjack and topped-up my bidon. I wondered if, while waiting there, the other two might arrive. They didn’t. And so I set off for the last and probably toughest part of the course. A nice descent down Church Road into Sundridge was followed a couple of miles later by Sundridge Hill, which starts off at about 16% but then eases very gradually. I found myself just slogging my way slowly up there. I think I managed to stay seated for most of it. I was still overtaking other riders though. It’s like we were all in slow motion, a bit like being in a dream. 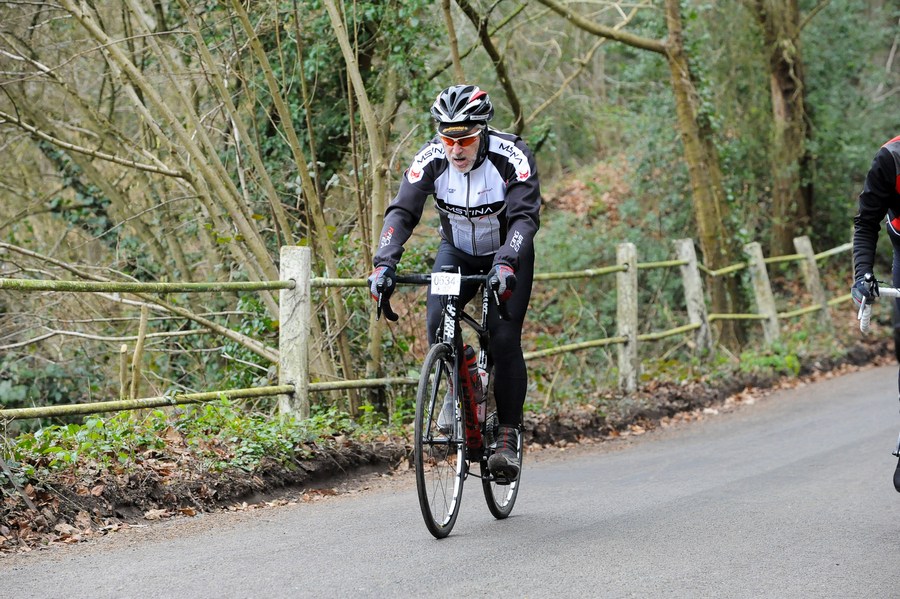 There was six miles to the next (dreaded) climb, which goes by the name of Row Dow (which everybody pronounces differently!). At various points of the ride I was feeling so exhausted that I was wondering “would I be able to manage Row Dow?” “or will this be the first time ever where I’ll have to stop?” Soon I had reached it. Two marshals were there and offered some advice to anyone listening “there’s a bit of a ramp ahead”. “Ha” I exclaimed, scoffing at their understatement. The road rises up as soon as you turn into Row Dow at about 10-12%. But it eases off in the middle back to about 6-7%. But as you look up ahead you can see it rising sharply again. This was the bit I was dreading, the 16-17% sting-in-the-tail. Eventually I made it to the top. 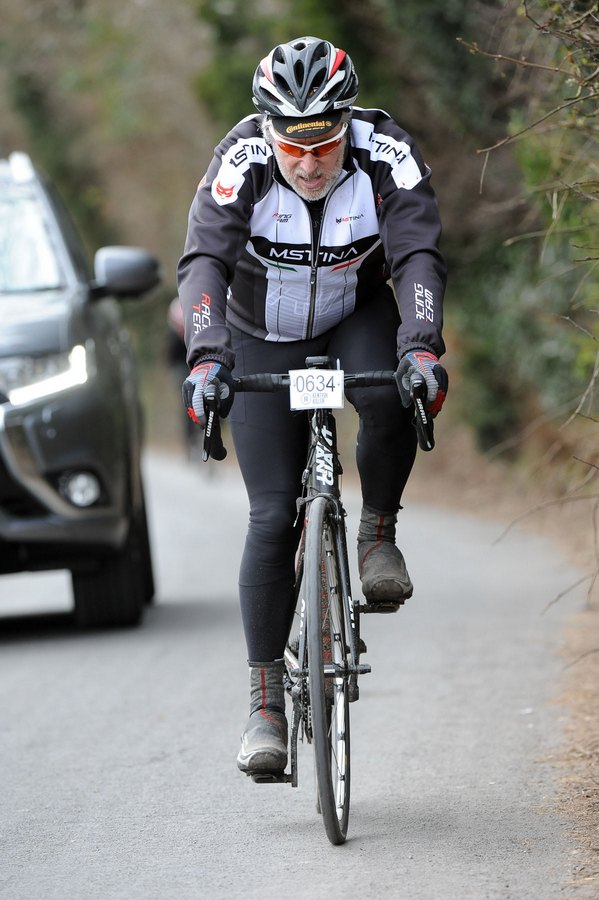 There was still one hill to come – Tinker Pot Lane. Normally this quaintly-named hill is no problem, but at this stage of a long hilly ride it’s significant. Luckily it’s quite short at under half a mile and averages 10%, with a couple of steeper sections. It’s nothing compared to Row Dow and you also have the knowledge that once you’re at the top, you’re home and dry, with just three miles to go, nearly all of it downhill. I put in a last ditch burst of energy on the last stretch.

Back at the finish I congratulated Sheila and we waited for the others. Tom was already there. Steve turned up with tales of woe as he had suffered a major mechanical in the shape of a buckled wheel, and had got a lift back by car. James turned up next. Although during the ride there had been moments of exhaustion and thoughts like “why am I doing this?”, once it was over we were all pleased to have taken part. 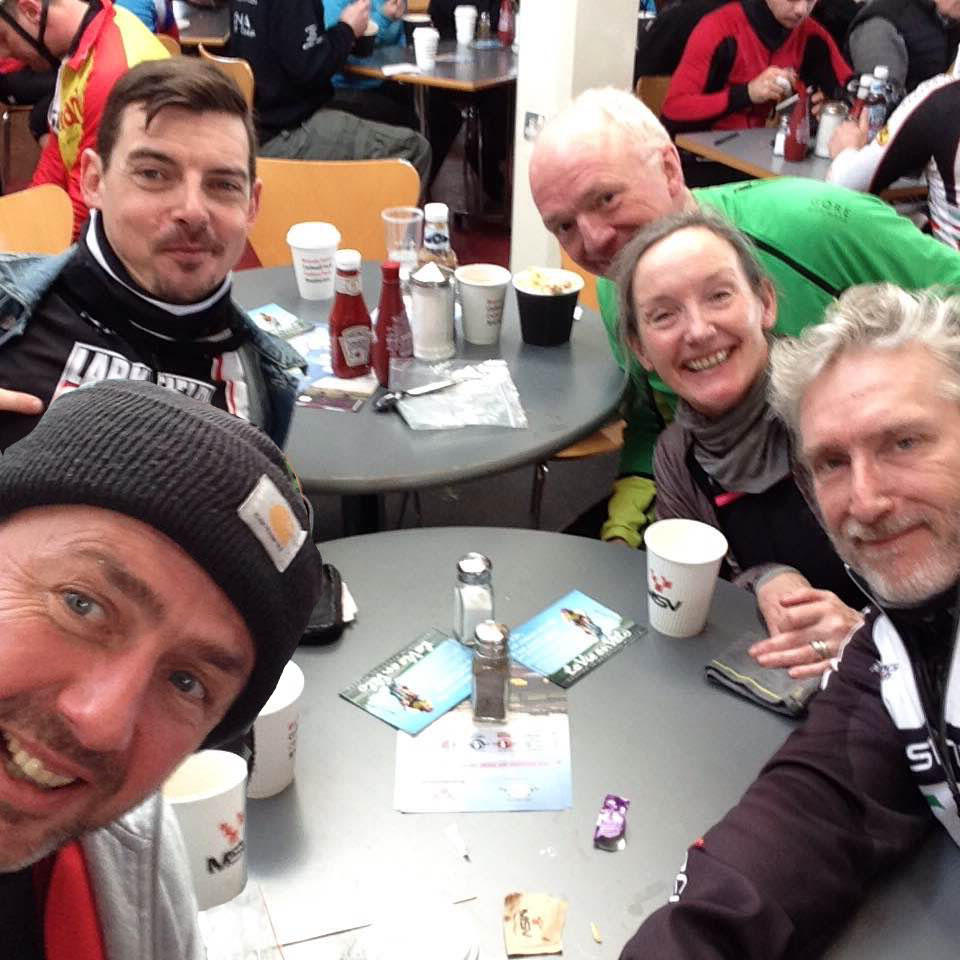