We arranged to meet at Kings Hill. I took a backpack to carry some trousers, proper shoes, extra jersey (it was cold), camera, lights, lock, etc. I wasn’t sure what bike-parking facilities would be available when we got there so I decided to take a cable, a huge padlock and my D-lock. Once I had put all that lot in the backpack, it weighed a ton! I considered leaving the D-lock behind, but in the end I took everything.

I set off at 10:40. It was about 5°C with a cold NW headwind. Just a couple of miles into the ride I found myself struggling with the weight of the backpack. Going up hills is going to be slow, I thought to myself. By the time I met Ian, I was feeling an unfamiliar ache on the outsides of my lower back. About twenty minutes into our ride, just before the long slow climb of Wrotham Hill I decided that I’d be better off if I got some of the weight out of the backpack and onto the bike, so we pulled over and I experimented with various ways of having the locks attached to the bike. The cable wrapped nicely round the bars, but the D-lock could only be hooked loosely around the headtube. It rattled about a bit but couldn’t really fall off or anything. As soon as we set off again, it felt great, like a huge weight had been lifted from my shoulders (!). Of course I was still pushing all that weight up the hills but now it wasn’t giving me back-ache.

We made good progress to London through Sidcup and Woolwich. The route even went through Marion Park (where the movie Blow Up was filmed). We reached the Emirates Air Line in a couple of hours. Bikes go free on this amazing cable-car across the Thames. It was the first time I had experienced it. I was surprised at the rate of incline as it climbed 300 feet above the city. Strava shows the gradient as well over 40%. 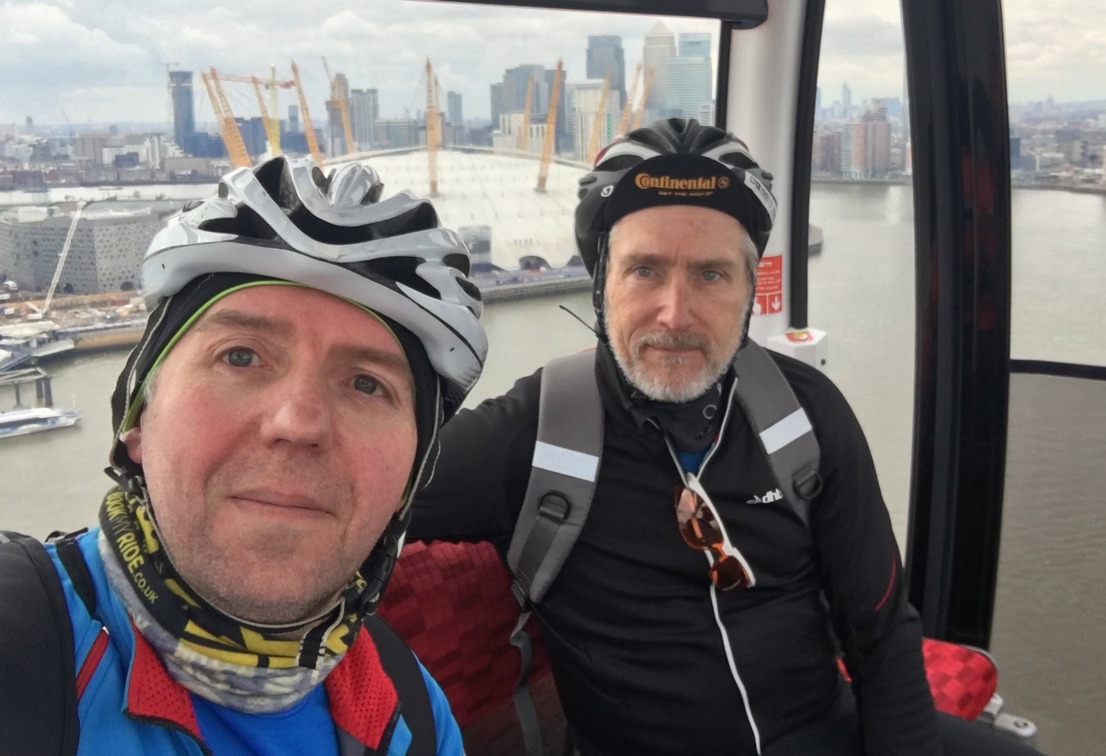 Once we had ‘landed’ on the north side of the river, it was then just a 4.5-mile flat ride to the VeloPark. We were able to easily find a place to park our bikes, and secured them using all the locking devices we had between us. Inside the venue, we found our seats; they were right behind the wall of the track. Although a bit cramped, these were among the best seats in the house – as close to the track as you could get and just before the bend after the finish line. What’s more, we could easily escape for coffees, etc as there was nothing to our right save the camera operator. 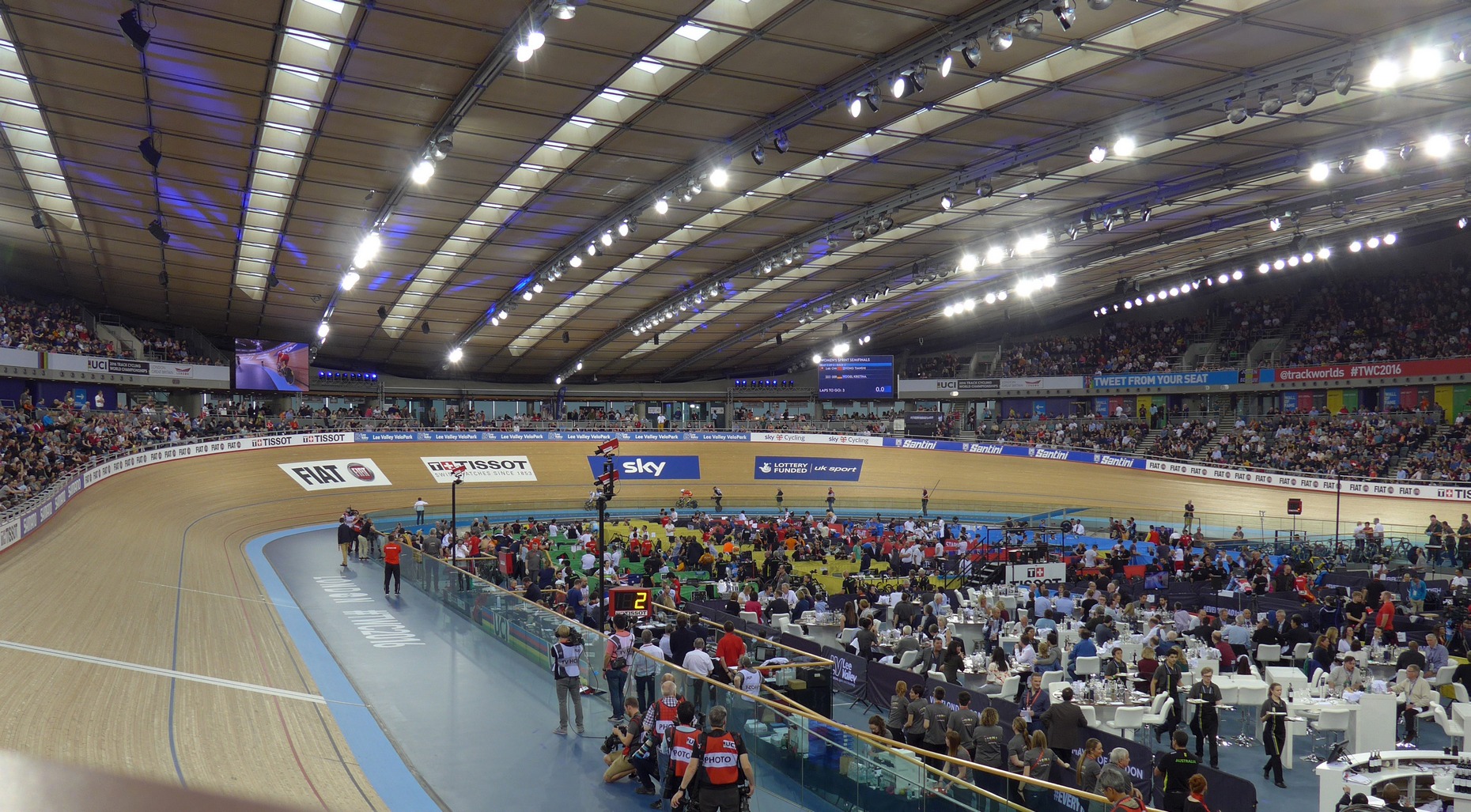 This was the first time I had been to a track event since about 1974, when I saw the Skol 6-day series at Wembley Arena. So I was a bit rusty. We soon worked out some of the rules of the various events. We first saw the Women’s Sprint semis and finals. 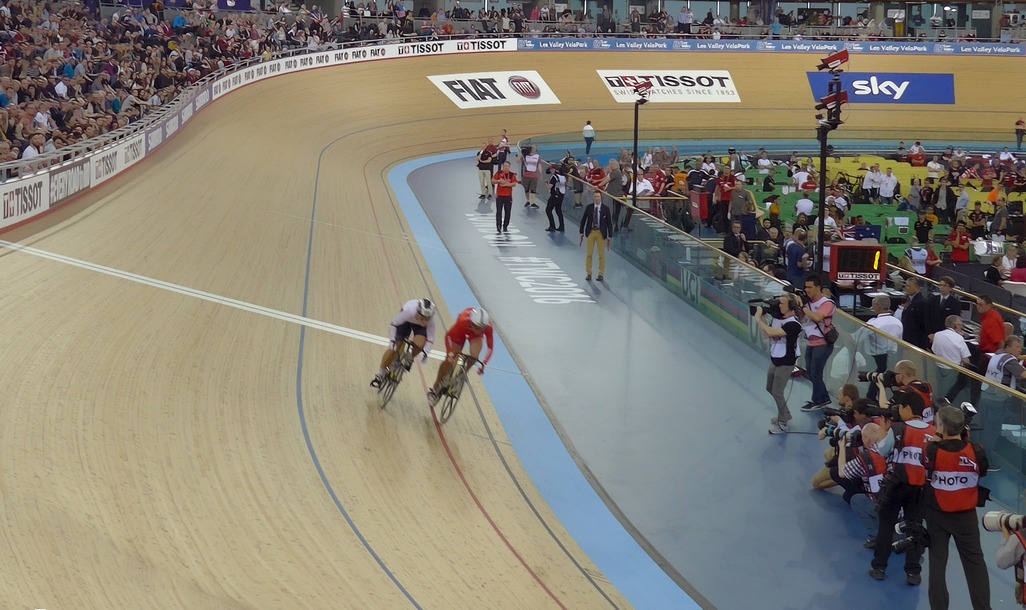 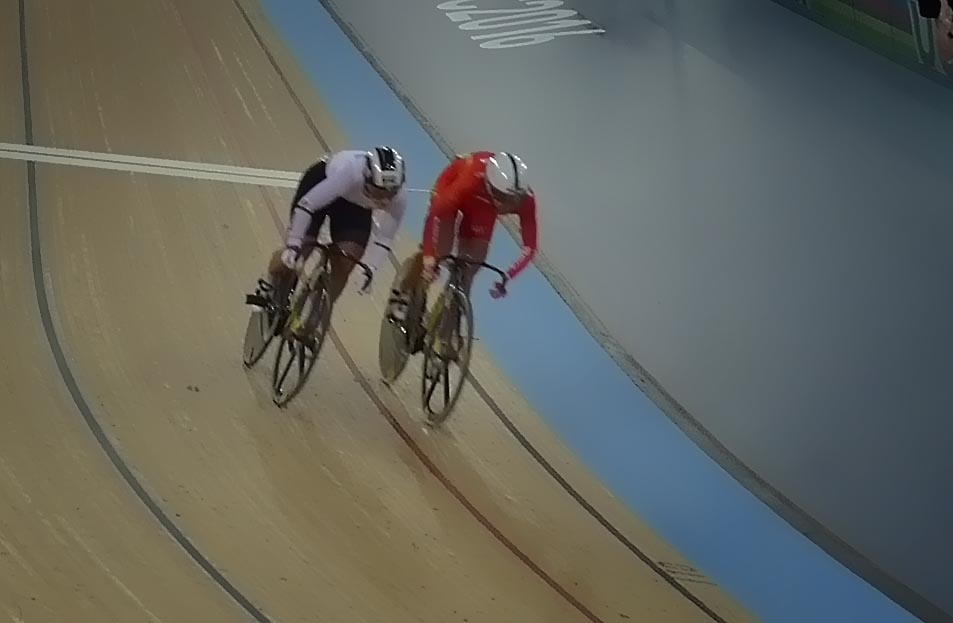 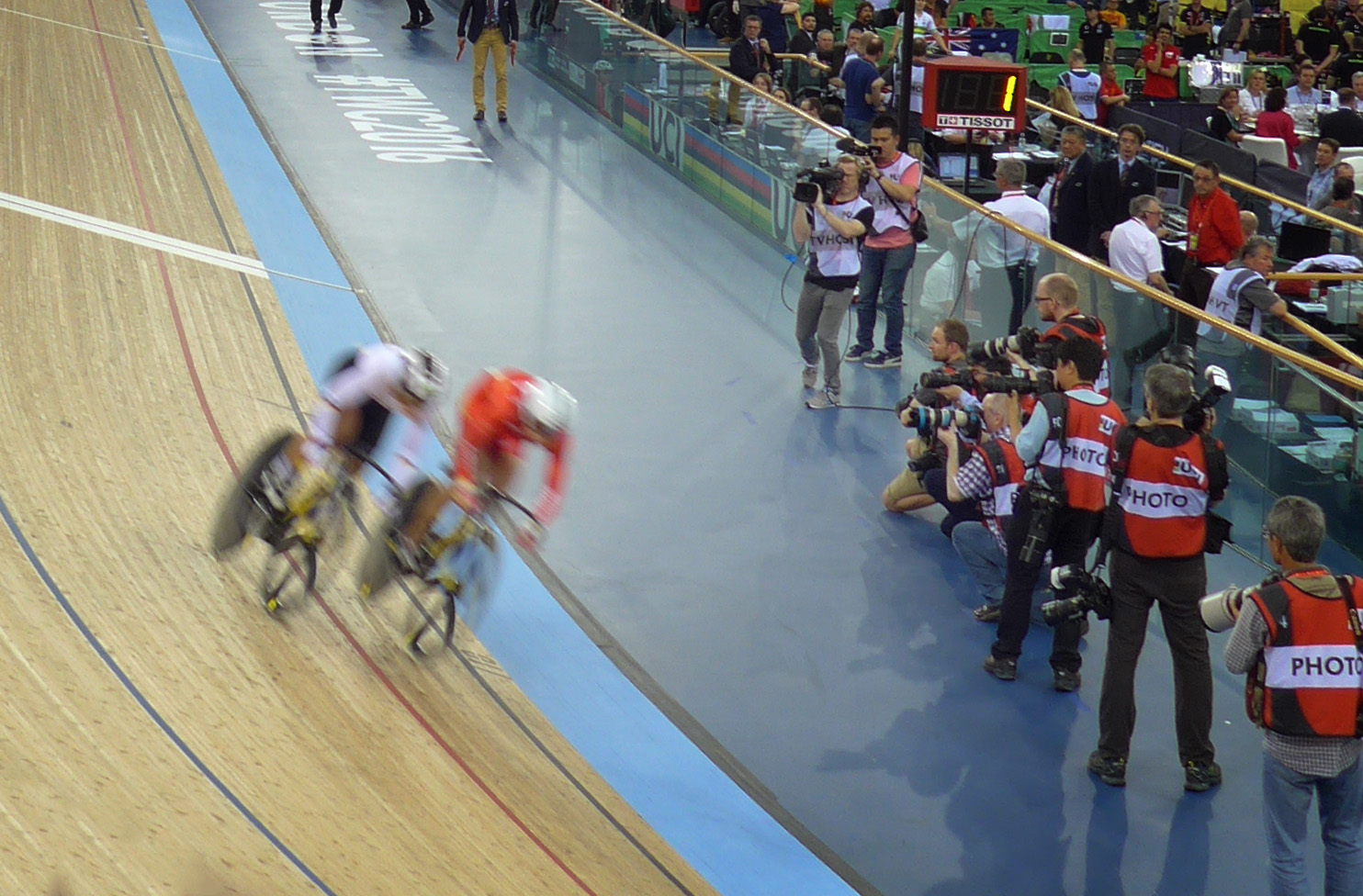 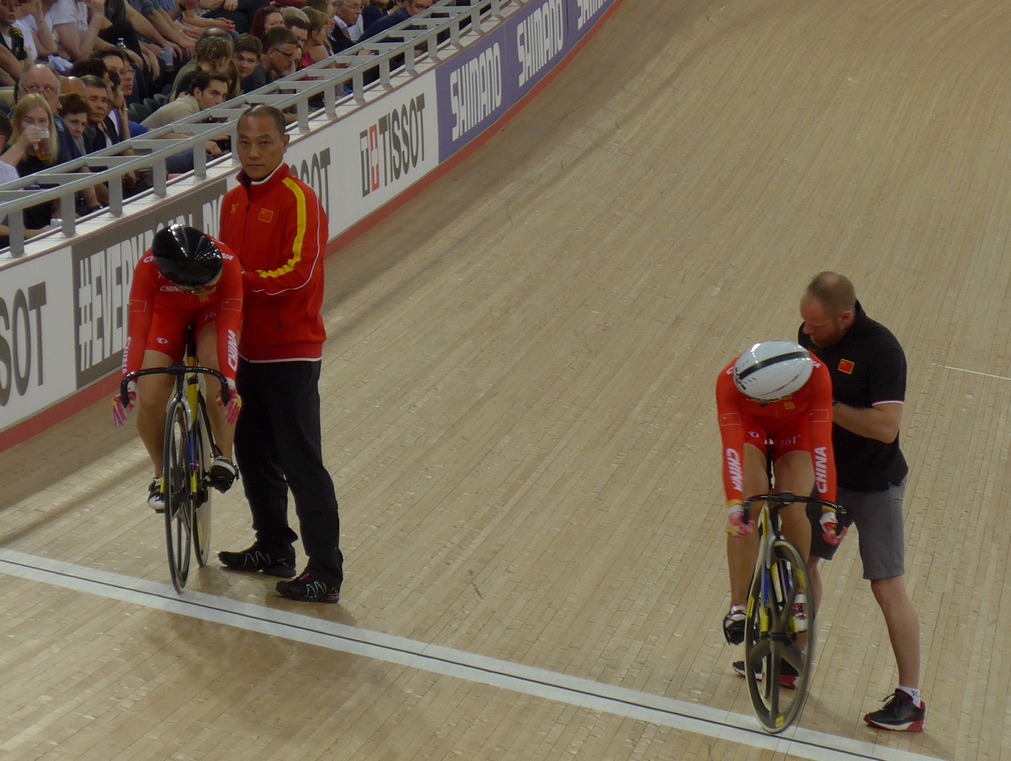 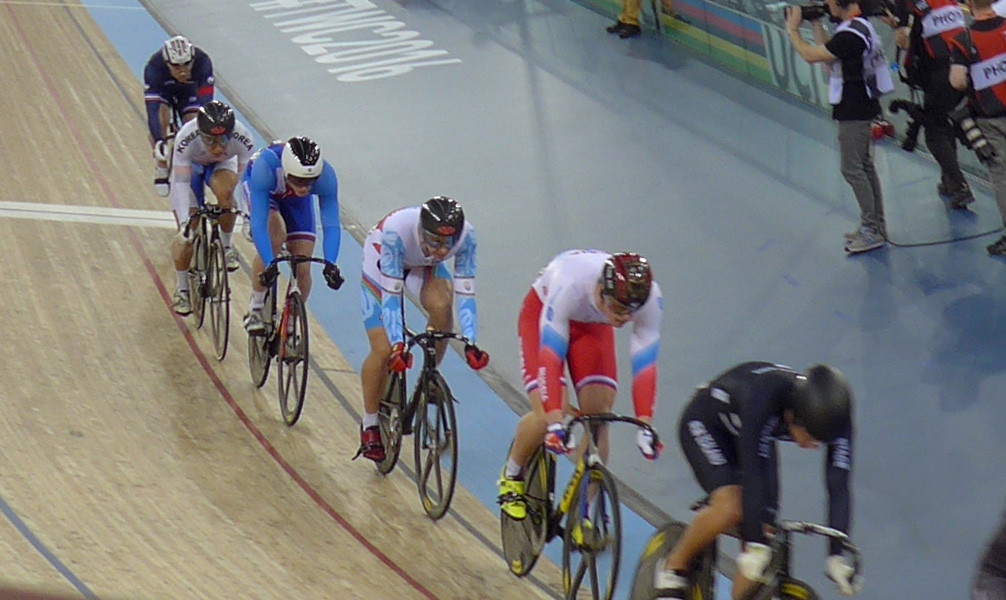 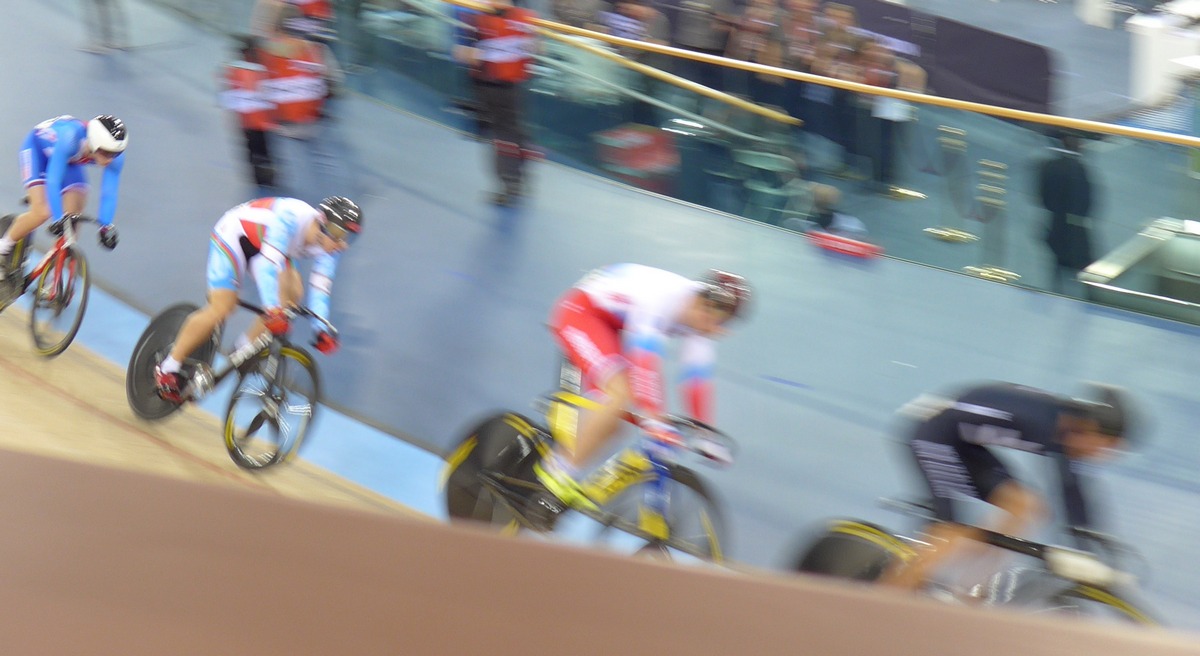 More exciting was the final points race of the Women’s Omnium, won in commanding style by the diminutive figure of Laura Trott. She had done most of the hard work in this event over previous days and was already well ahead, points-wise, before the race started. 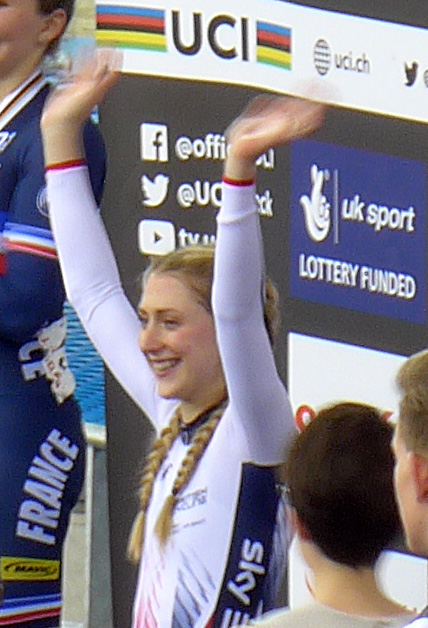 To be honest, most of the other races are a bit of a blur to me now because they were eclipsed by the amazing event that was the Men’s Madison. Consisting of 16 pairs of riders from different countries, Great Britain was represented by Bradley Wiggins and Mark Cavendish. 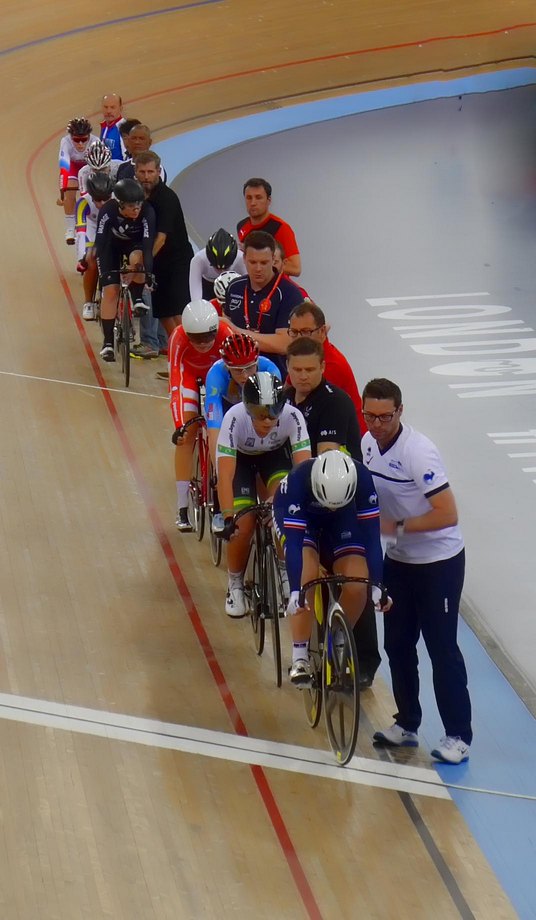 It took Ian and myself quite a few laps to work out what the hell was going on in this event. In fact I wish I could go back and watch it all over again knowing what I now know. Sometime early in the race, while me and Ian were still trying to fathom it out, the French, Swiss and Columbian pairs had gained a lap over the rest. So the remainder of the race was spent willing our team to regain the lap. They put in attack after attack, but kept getting hauled back. Eventually they broke away with the help of the Spanish riders. It took 17 laps for them to get their lap back. The atmosphere in the velodrome was electric and the crowd went wild when they reached the back of the pack. They were ahead on points and were looking quite safe at that point. But then Cavendish hit the boards almost right in front of us. It could have been disastrous but he was back on his bike within seconds and they went on to win the event eleven laps later. It was such an amazing race – it couldn’t have been scripted any better. What a great way for Wiggo to finish his last World Championships! 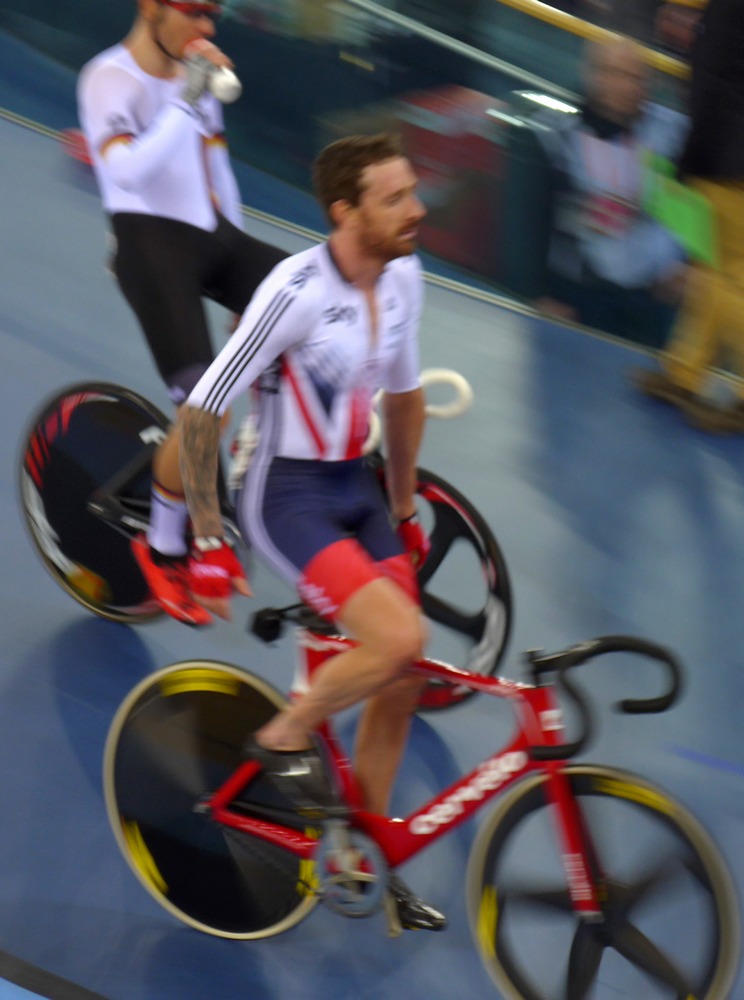 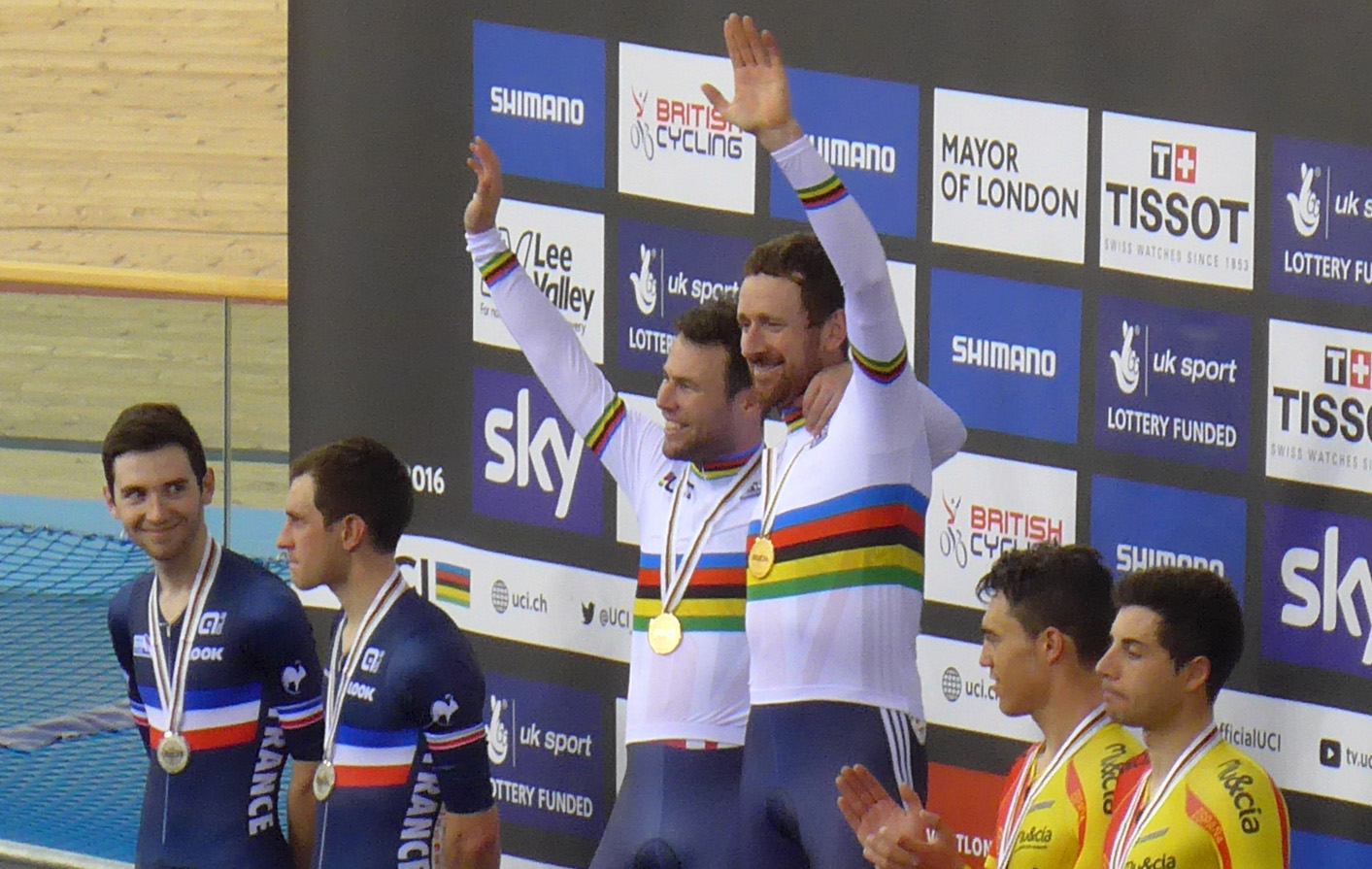 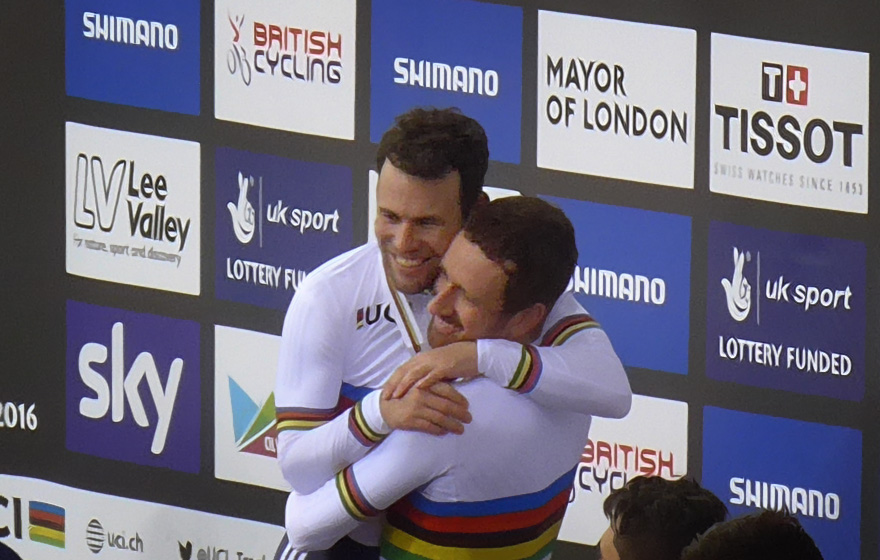 We didn’t hang around until the bitter end, but left after the main presentations. Out into the cold night air, we spent a good ten minutes getting out of our ‘civvies’ and fitting everything back to our bikes, etc before we set off. But only as far as Stratford International station where we grabbed cheese and ham toasties and a cup of coffee. Now we were ready for the homeward journey. 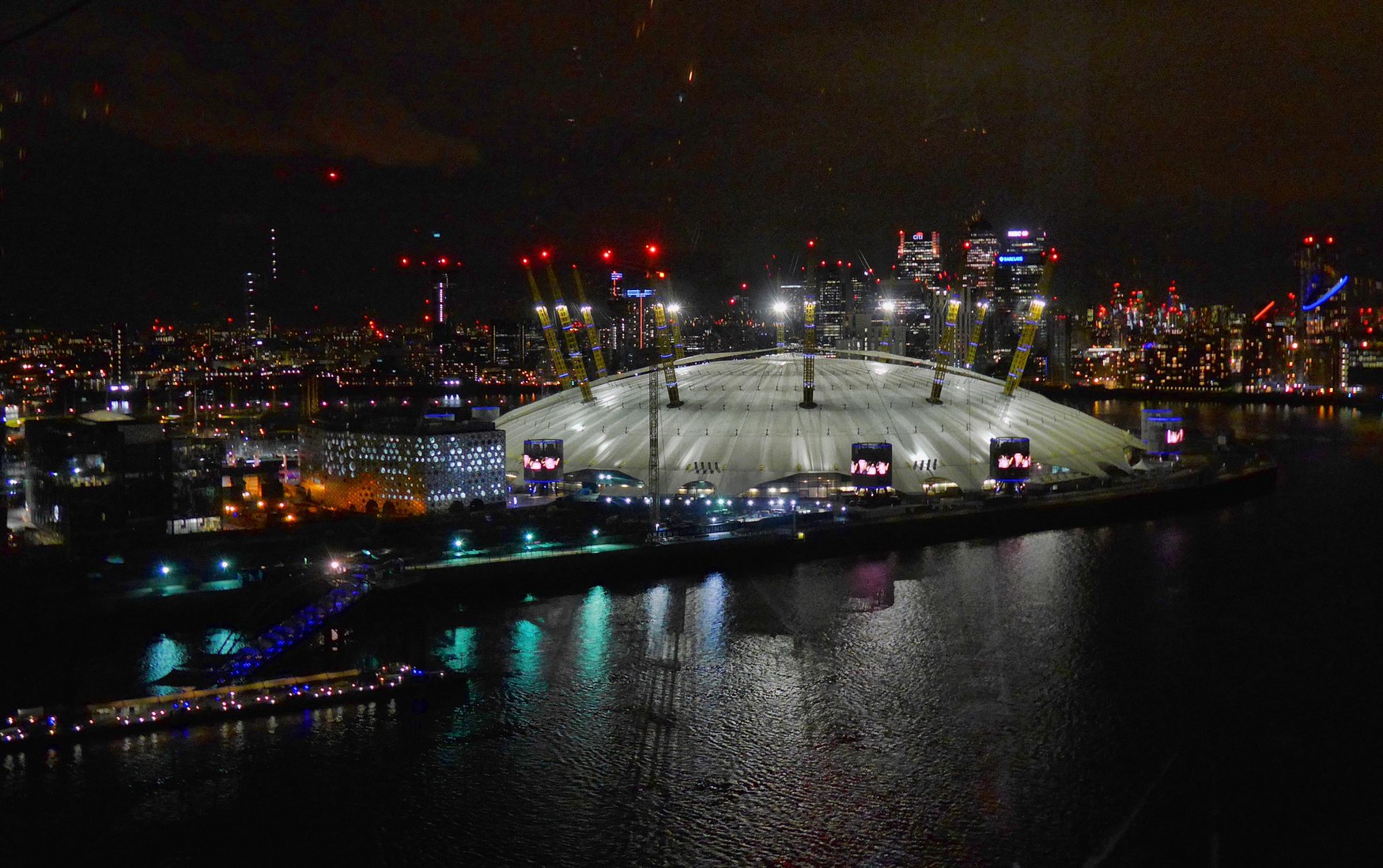 The wind was with us now and the cold didn’t really get to us. In under an hour we had left the city behind and were out into the unlit countryside. I became aware of the difference in air quality as we escaped the London air. It smelled fresher. (I have never noticed this on a bike before but I do often notice this when getting a train back from London.) The seemingly never-ending (but in fact 5.6 miles) gradual climb past Brands Hatch to the top of Wrotham Hill started to take its toll, but we were rewarded by the subsequent 2.3-mile descent, over which I averaged 28.5 mph and managed to get a PR (by one second) on one section of it with an average of 32.6 mph for that section. Maybe Wiggo and Cav had inspired me!

At Kings Hill, Ian and I went our separate ways. I got home twenty minutes later feeling pretty OK considering the 75+ miles with all that weight! The first thing I did when I got in was to weigh the backpack; it tipped the scales at 5.4kg, or to put it another way, not much less than the minimum weight of the bikes I’d seen riding round the track this afternoon!

Thanks Ian for a really great day!