OK. That is a very bad title, I agree. I wasn’t originally going to blog this ride but an incident and subsequent detective work highlighted some bad practices that I thought I should record.

It was a lovely sunny day, but it’s still only March, so no shorts yet! I decided to do a slightly modified version of my last ride to the Hoo Peninsular. This time I included a section nearer the sea at Allhallows and a bit where I would ride to the sea via Peat Way, just to the west of Isle of Grain. I was aware that some of the new bits could be off-road.

I left at 11:00. The first part of the ride was pretty straightforward and the same as last time. Through Aylesford and up Bluebell Hill, and then down to the Medway Crossing. 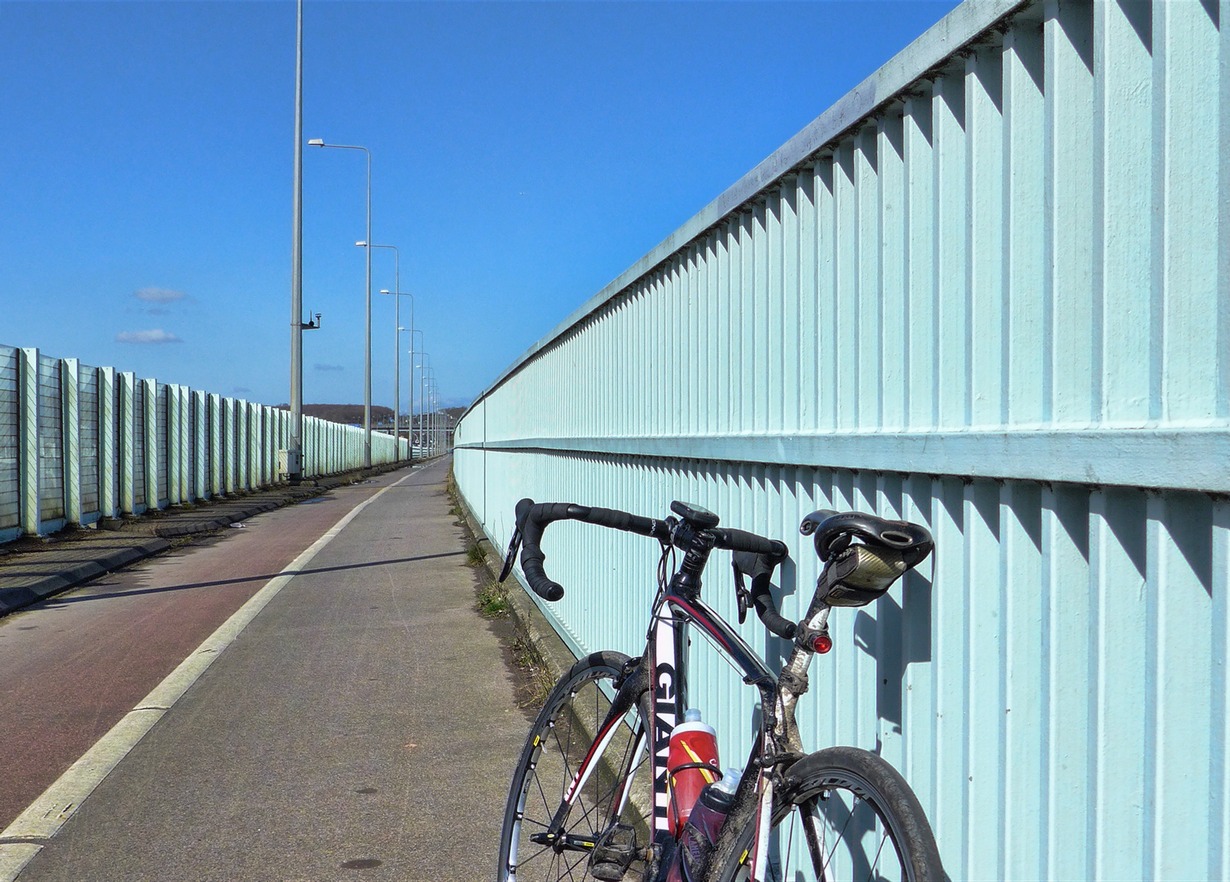 I took a new route through Strood, and then on to the Hoo Peninsular via Higham, and on towards Cliffe, Cooling and High Halstow. I headed towards the sea at Allhallows by taking an off-road path, down another narrow path that looked more like a muddy river, through some deep mud and into a caravan park! Everyone was settling into their caravans on this, the first day of the Easter holidays. A couple of miles later I was back on real roads and left Allhallows behind as I headed up the Grain Road towards Isle of Grain.

Before getting to the I of G, my route turned left onto another excursion to the coast, but soon I saw a sign that I could go no further because it was Ministry of Defence land. I reasoned that in the absence of a gate, they didn’t really want to keep me out so I kept on going. More signs appeared, now warning of my approaching a firing range. I ignored the first few. Surely you wouldn’t be allowed to drive down a road without any gates, straight into the middle of a firing range! Eventually the signs did their job of deterring me and I turned around and continued on my original route to Isle of Grain.

I stopped for fifteen minutes, looked at ‘the sea’ and had an energy bar and what was left of my banana. The ride back from the I of G was into the wind, which I hadn’t been expecting. Just past Chattenden I was enjoying a fast main-road descent when I had a front tyre blow-out. Doing about 30 mph, I struggled to slow down, but managed to get the bike under control and came to a halt by a side road. I proceeded to change my inner tube. A helpful cyclist stopped briefly to offer assistance. At least it was the front wheel this time. I had had a puncture on my previous ride last Sunday with the club. That had been the first puncture since fitting the 28mm tyres; and now a second one in quick succession.

I removed the punctured tube but didn’t bother to inflate it to see where the puncture was (1st mistake; see below). After checking the inside of the tyre for any sharp objects, I installed the new tube I had with me.These 28mm tyres take a lot of inflating. I got it pumped up to a usable pressure and left it at that, otherwise I would have been there all day with my mini-pump! I fitted the wheel back (lucky break; see below) and rode off.

Shortly into the ride I noticed a ticking sound (once per rev) every time I applied the front brakes. I assumed that I might have worn through the brake blocks like I had done a few weeks ago with the rear brakes (wrong assumption; see below). So, for the rest of the ride I concentrated most of the braking to the rear brakes, to save making the front one any worse.

The rest of the ride was without incident. After getting home I decided to repair the punctured inner tube. I noticed that the puncture, unusually, was on the side of the tube. Also I noticed that the puncture had marks to the left and right of it. I briefly wondered what could have caused this and concluded that something must have entered at an angle, punctured the tyre and been pulled out at a different angle as the wheel rotated. I thought no more of it (missed clue #1). After fixing the tube I thought I’d better check the front brake blocks for wear (because of that ticking sound I’d heard). I discovered that they were not really worn out. But I did notice that one of them was mounted slightly too high such that the rubber on the top of the block was overlapping the top of the rim, and where the block had worn, the (unworn) rubber at the top was getting quite near to the tyre. I readjusted the block so it lined up properly with the rim (missed clue #2). I spun the wheel round and gently applied the brake to see if the ticking sound was still there. It was; and I soon discovered what caused it. A part of the tyre, just where it emerges from inside the rim was worn through and I thought I could even see the inner tube. 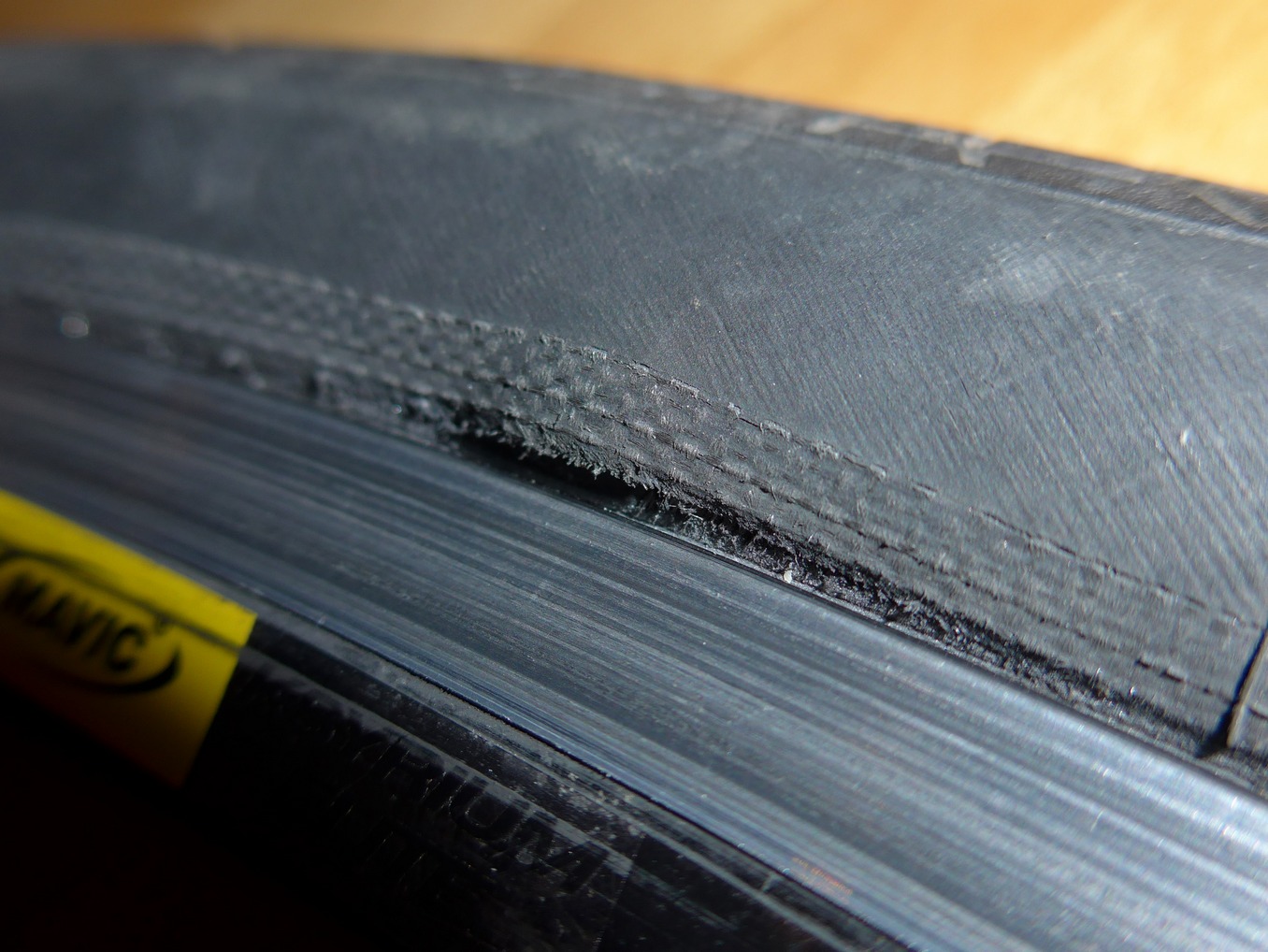 I didn’t know what had caused it. It couldn’t have been due to the brake block thing because it was on the opposite side of the tyre to that!

After checking the prices of new tyres on line, I went to bed to sleep on it.

Lying in bed the next morning thinking about it (when I should have been out on my bike!), it suddenly dawned on me that the front wheel, unlike the rear, can be fitted either way round. Then I remembered how I had refitted the wheel the previous day after the puncture – I could picture myself leaning over the bars and doing up the quick-release lever on the right hand side. That’s not the normal side because I usually have both QR levers on the left side of the bike. I got out of bed and went downstairs to verify if this recollection was correct. Yes – I looked at the bike and the QR was on the right. So that explained everything – the unevenly worn brake block that overlapped the rim had literally worn its way through the tyre and had caused the blow-out! That also explained why the puncture on the tube had the two wear marks either side of the hole. Further investigation revealed the extent of the damage. 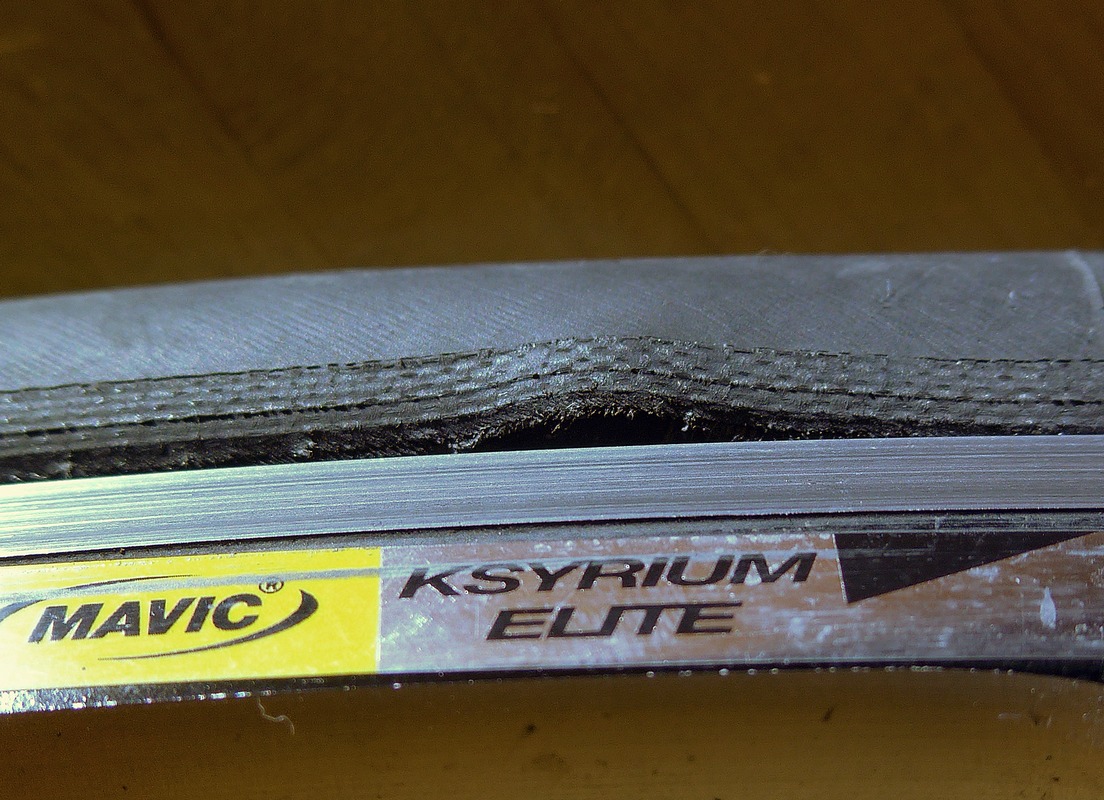 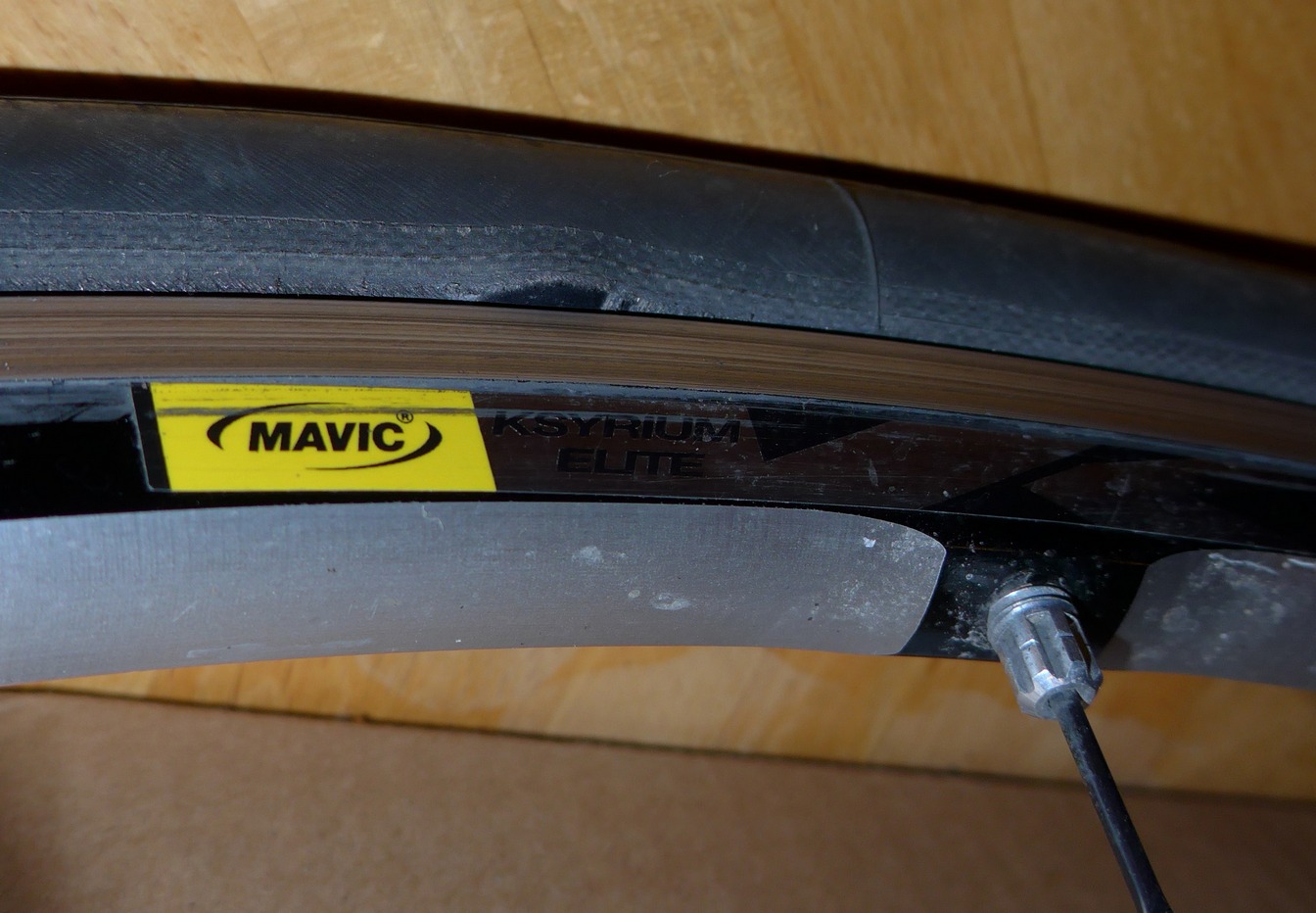 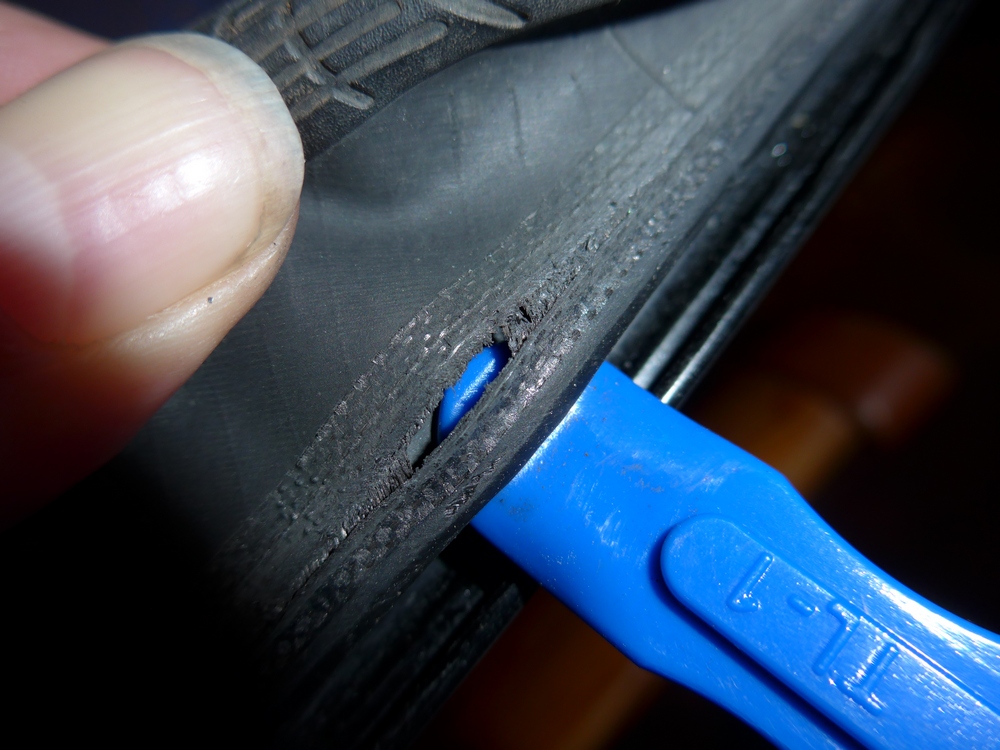 So what have I learned?

2 Replies to “Hoo’d have thought it!”