I am so out of condition so far this year that I had decided, and announced, that I wouldn’t do the 2017 edition of the San Fairy Ann Sportive. But a few days before the event I decided to do it ‘just for the ride’. It was obvious I wouldn’t be able to achieve either last year’s time or target (4 hours). The weather forecast was for showers but that can mean anything really, but it was already raining when I got up. When I got to the event start, it was still raining. 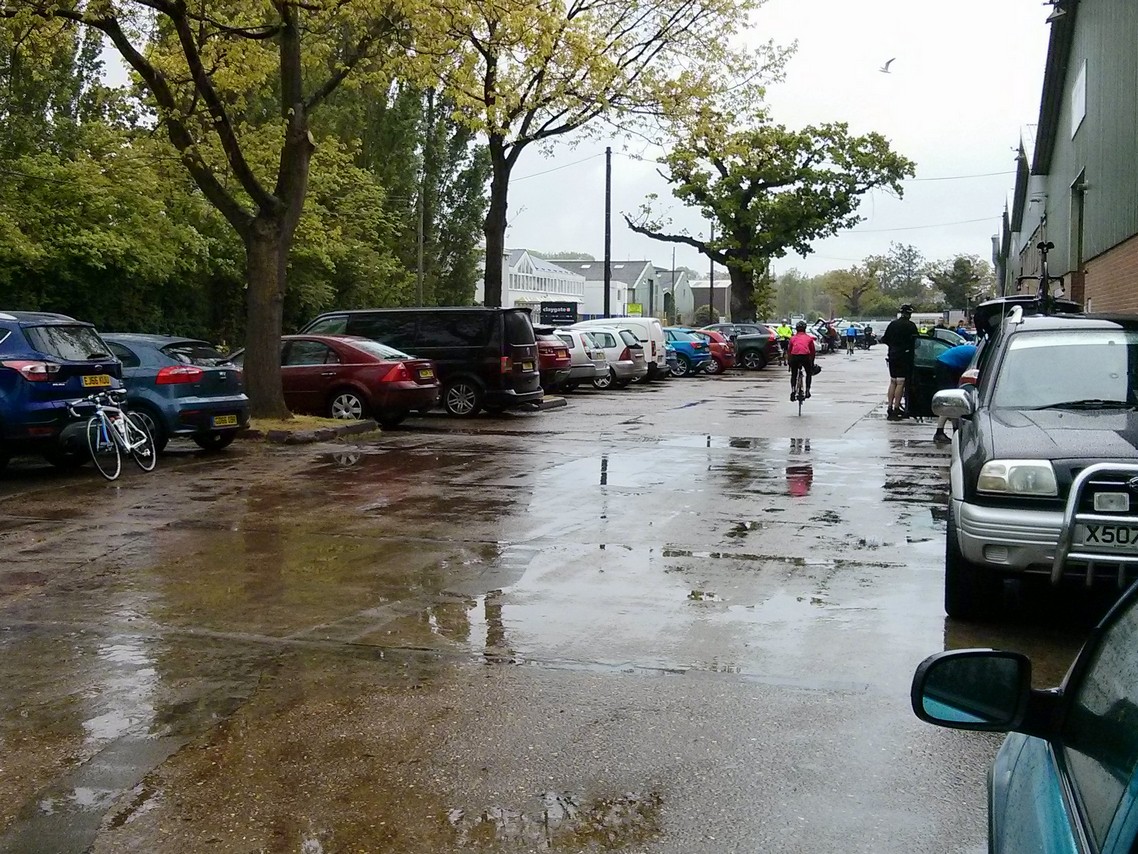 We started in the rain. The good news, and about the only good news of the day, for me, was that Me and Al set off at a decent pace and left the rest of the group we had started with behind. At the four-mile mark came the biggest climb of the day – Hunton Hill. Just at this point a group of riders from one of the clubs’ faster groups caught us and blazed their way up the hill. Al managed to stay with them. I posted my 2nd slowest ever time, 30 seconds slower than last year. So I was dropped at this early stage. That was OK. I’d already said to Al that he should do the best for himself because I knew I would be slow.

I was riding on my own for the next twenty-one miles. It was raining nearly all the time but quite fine so not too wet. Visibility through goggles was frustrating though. I kept trying to wipe them with my gloves but that just smeared them, which was only marginally better than the rain drops. During that section I was surprised that I was not being passed by anyone, particularly by the Inters+ group who normally set a fast pace. Still I wasn’t doing too bad, averaging just under 17 mph over those 21-miles.

Eventually, just before Smarden, the Inters+ group finally caught me. Surprisingly I managed to stay with them over the next 20 miles, virtually to the food stop. 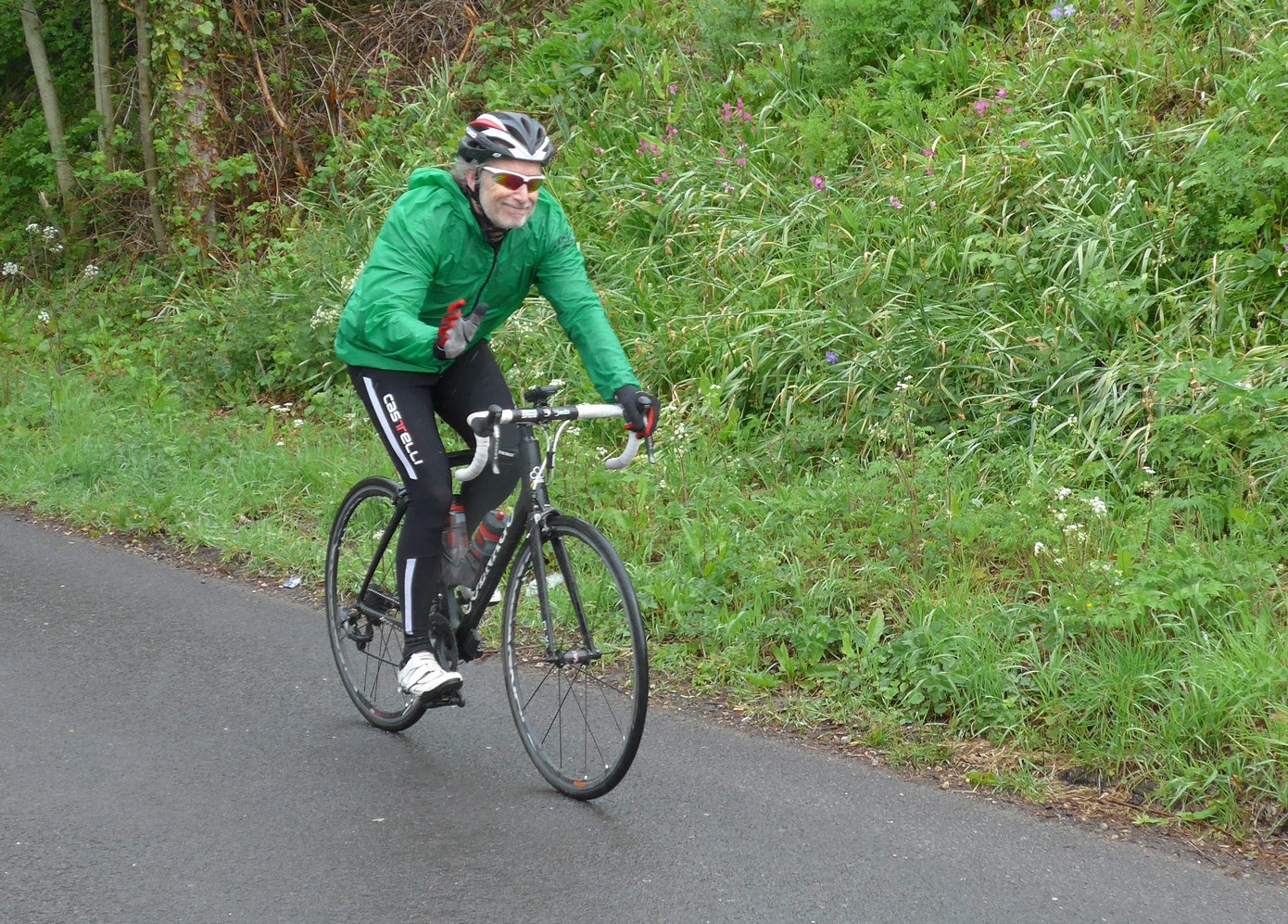 Unlike last year, and with no target to beat, I had a leisurely break at the food stop, chatting to other riders and eating a lovely slice of fruit cake. Setting off from the food stop, I rode the remaining 26 miles back to the finish on my own. During that time no-one passed me, leaving me to ponder at one point whether I was last! (I wasn’t).

There was a brief dry spell during this section, but with 12 miles remaining, and with the sun making a rare appearance, the sky ahead looked ominous (yes, I even stopped to get a photo – that’s how leisurely I was taking this ride): 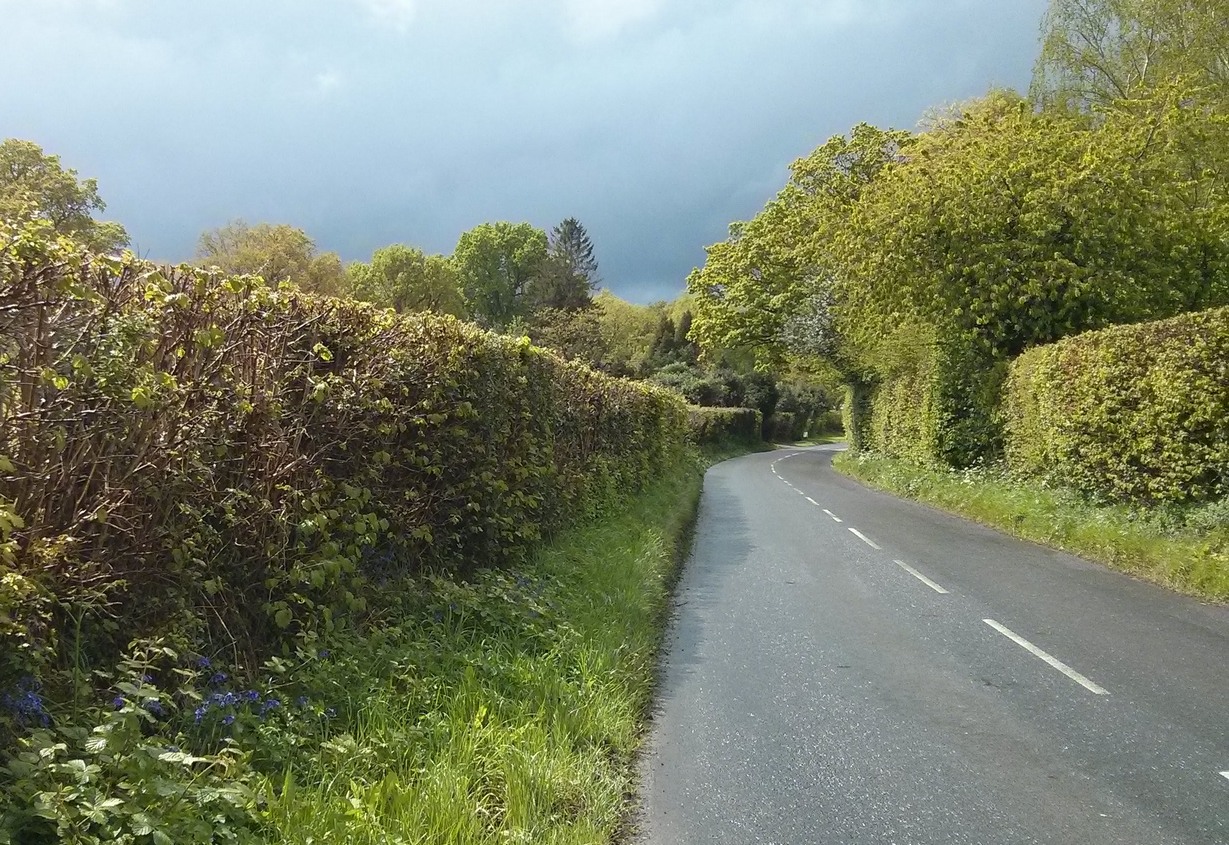 Two miles later the heavens opened! Needless to say I got soaked, through all layers. My feet were wet and cold. In fact my right foot was completely numb as well. My right knee was aching because it was wet and cold. My hands were soaked and frozen (I didn’t mention it but today’s high was 11°C!) Visibility got so low through my goggles that I was forced to take them off. The remaining nine miles were miserable. Even the normally enjoyable downhill sections were intolerable because the wind against my soaking wet clothes merely made me even colder, the cold driving rain pierced into my unprotected eyes and rivers of rain water ran down the roads. To say I didn’t enjoy this part would be an understatement!

Shortly before the end I tried to get my woes into perspective, reasoning that I’m not some poor refugee fleeing a war-zone, nor somebody starving to death somewhere in the world. I’m just cold, wet and tired – a first-world problem!

As I approached the finish in Marden I saw Al loading up his bike. He had achieved an excellent time of 4:20. Well done Al! I gave my number in at the finish but didn’t even bother to see what time I had achieved – I just wasn’t interested. I had an egg-roll and a chat to some friends and rode back to my car for the journey home.

When I got home I couldn’t stop coughing – I felt like I had hypothermia or something. I immediately ran a hot bath, something I never do. Gradually I thawed out and my cough disappeared.

Found out afterwards that the event raised nearly £5000 for the Air Ambulance, so in that respect it was worth the effort, and hopefully someone will eventually benefit from that.