Got these wheels second-hand from eBay. The seller said they had done just 200 miles and, judging by the look of them and the tyres, I had no reason to doubt him. They came with a Shimano Ultegra cassette, which I sold on eBay for £35, so I ended up paying about £100 less than the price I could get them new for.

I fitted them in February and tested them out on this ride. During the ride there was a loud rattle coming from the bike, especially when going over bumps. I stopped and inspected the drive-chain but could see nothing obviously amiss. I assumed it was the rear dérailleur out of adjustment. After I got back I discovered that my SRAM cassette that I had fitted to the wheels had quite a bit of play in it. When I took the wheel off I could rock the cassette by pressing down alternately on each side of it. I guessed that I probably needed to fit a shim between the wheel and the cassette. A bit of googling led me to this goldmine of information containing everything you need to know about wheel/cassette compatibility. The chart therein revealed that I needed a 1.75 mm spacer. My LBS had one in stock, so off I went, and £2 later all was well.

See this post for more information about cassettes and spacers 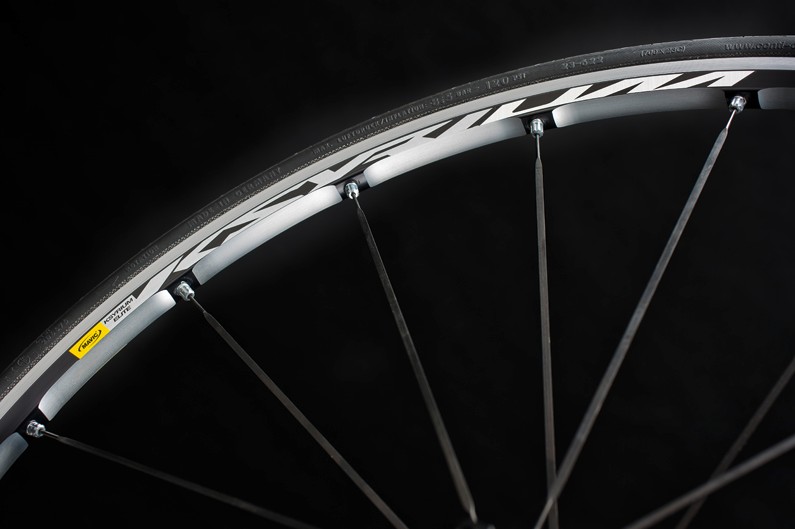 These are just about the best-looking wheels I’ve seen, mainly due to the ‘scallops’ between the spokes where metal has been removed to reduce weight. The spokes are of the blade type and I have already cut my finger on them once when the wheel was spinning slightly as I lifted the bike from the back of my car and one of the spokes removed a slice of skin from my knuckle! These wheels are very stiff and definitely improve the handling of the bike. The Mavic tyres fitted have been sensational – no punctures in over 1000 miles of really bad roads/off roads (there, I’ve said it now!!)