Today’s route is a shorter version of the ride that I had to abort last October because the road was closed for rock reinforcement work. The weather forecast today is for a sunny day, temperature in low to mid teens ºC. I had a quick walk around outside to gauge the temperature and decided to wear shorts and a short-sleeve top. But, a few moments later, when I got my bike out, I decided that the air had a bit of a nip in it, so I changed to a long-sleeved thick jersey. I took arm-warmers, snood and raincoat for the descent.

The rest of this report was dictated into my phone at various points. Firstly a shot of the bridge at Puget-Théniers, just as I set off The first five miles along the main road was reasonably flat, but I seemed to have the wind in my face, which can only be a good thing because that will help me on the way back. 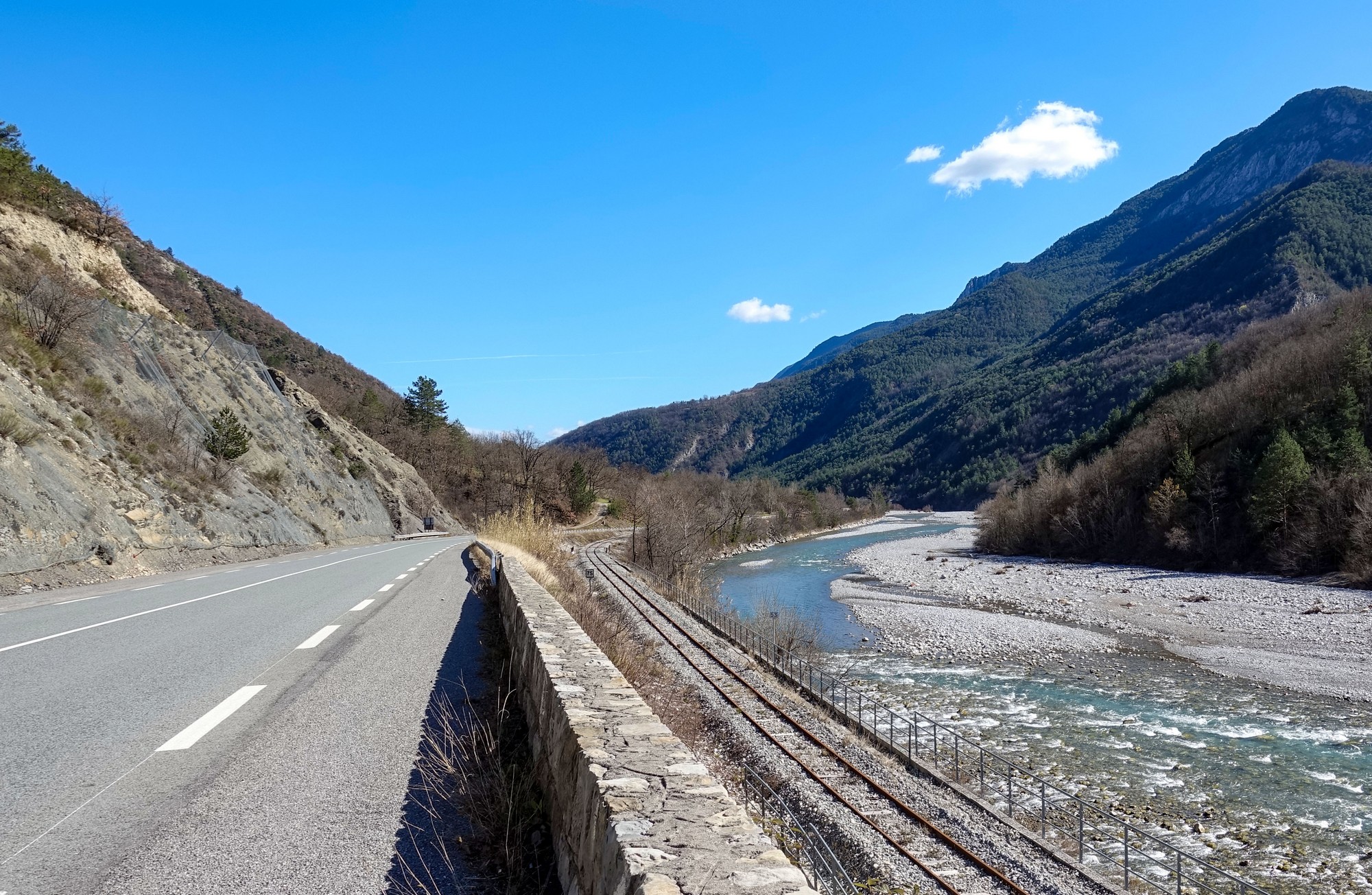 First report coming from about 4 miles up the gorge. I’ve stopped at a small village and just went down to see what the bridge looks like.

The idea to wear a warm long-sleeve top was a good one because a lot of the gorge is in shadow. I went past the section of the road that they were repairing last time and got a few photos.

A moment ago I looked up and for the first time saw a little bit of snow on top of the mountain – that’s the first time I’ve seen any evidence of the white stuff this whole trip. They’ve had one of the mildest winters here this year and lots of ski stations have had to close for the season.

In the deep gorge, my Garmin got really screwed-up and it thought I was standing still even though I wasn’t, because the huge rocks were getting in the way of the GPS signal. 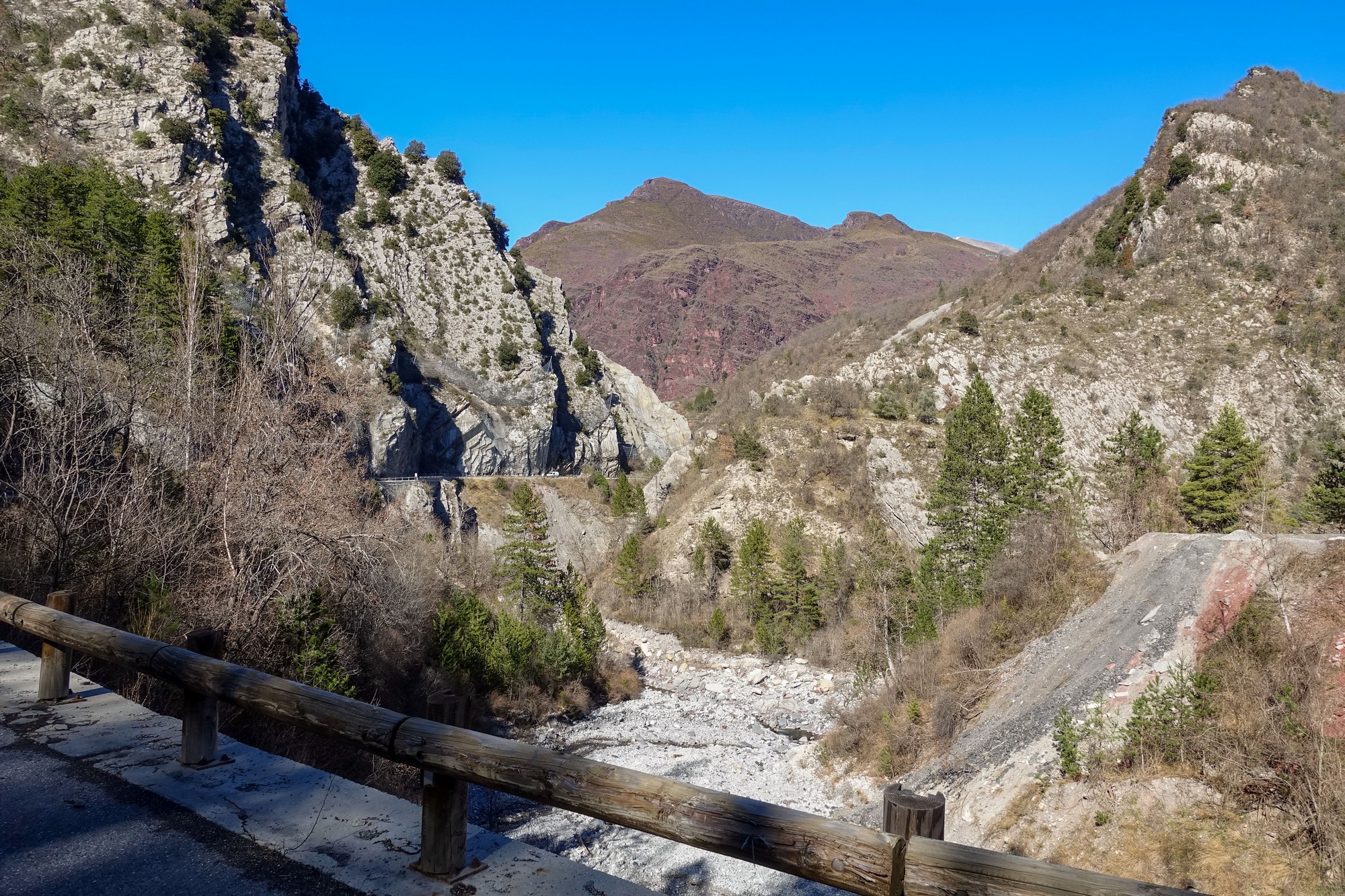 Sometime after that last report, I saw a couple of coaches on a road very high up, right in front of me. I thought that can’t be the road I’m going on because it looks too ridiculously steep. I assumed it must be going to one of the villages I could see up in the hills. 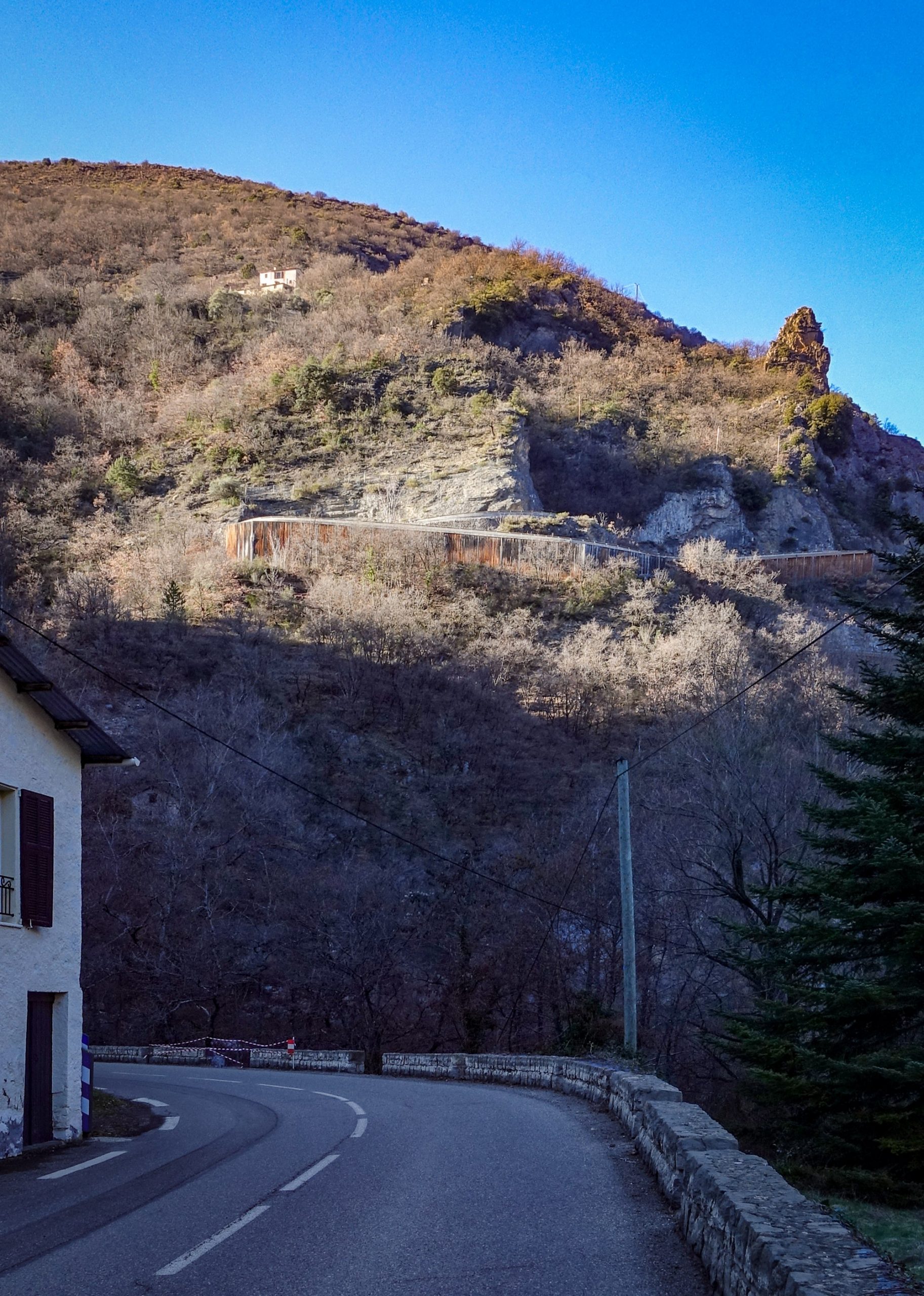 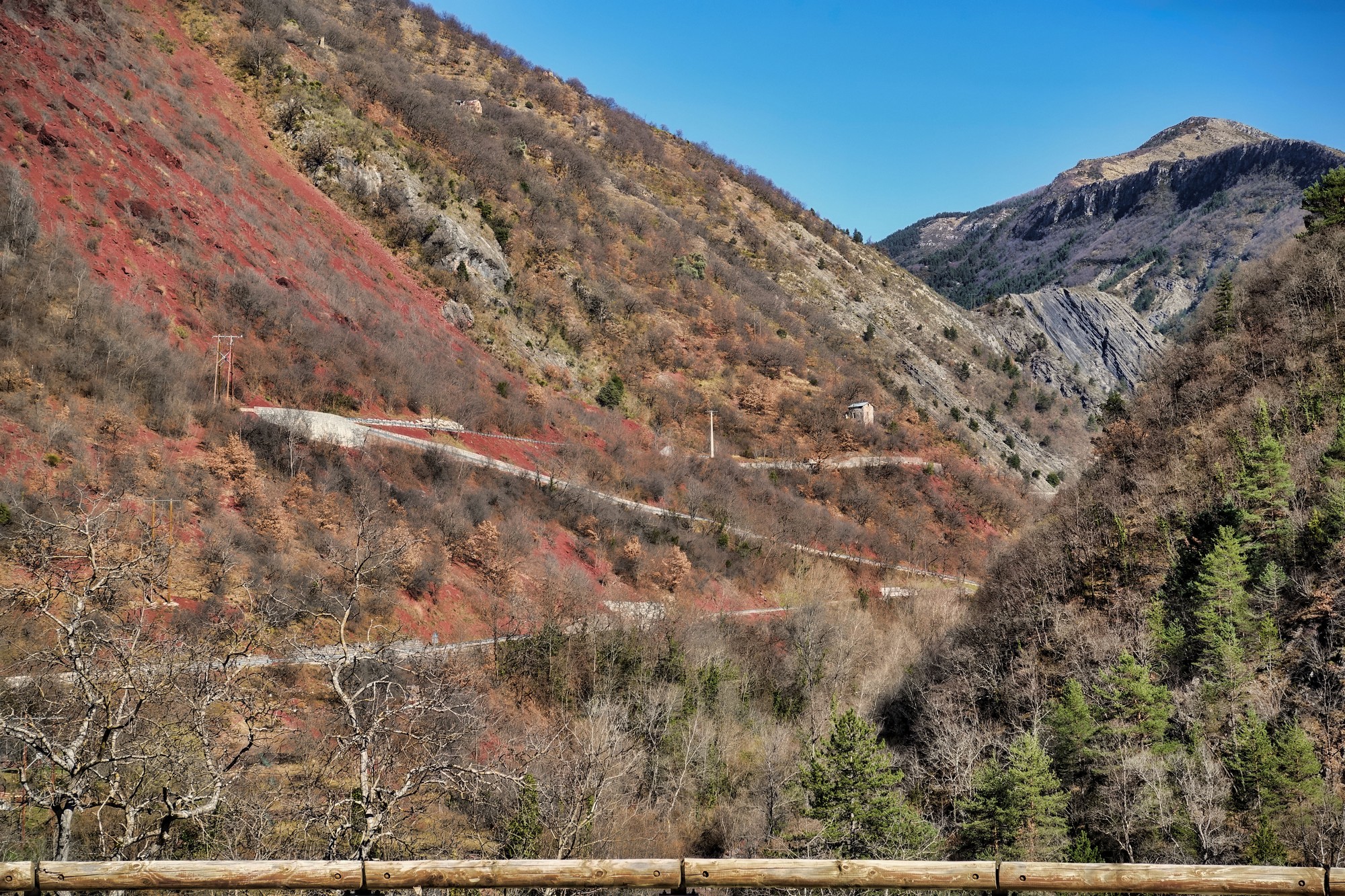 Shortly after that I came to the turn off for Pierlas (reportedly a beautiful route along a valley, and ultimately a tough climb to Col de la Sinne). My original plan was to ride that way today, but I had changed my mind earlier to head towards Valberg.  So I needed to turn left, and that’s when I realised that the steep road I’d seen a few minutes ago was indeed the road I would be climbing, and I’ve been in first gear 36t ever since! 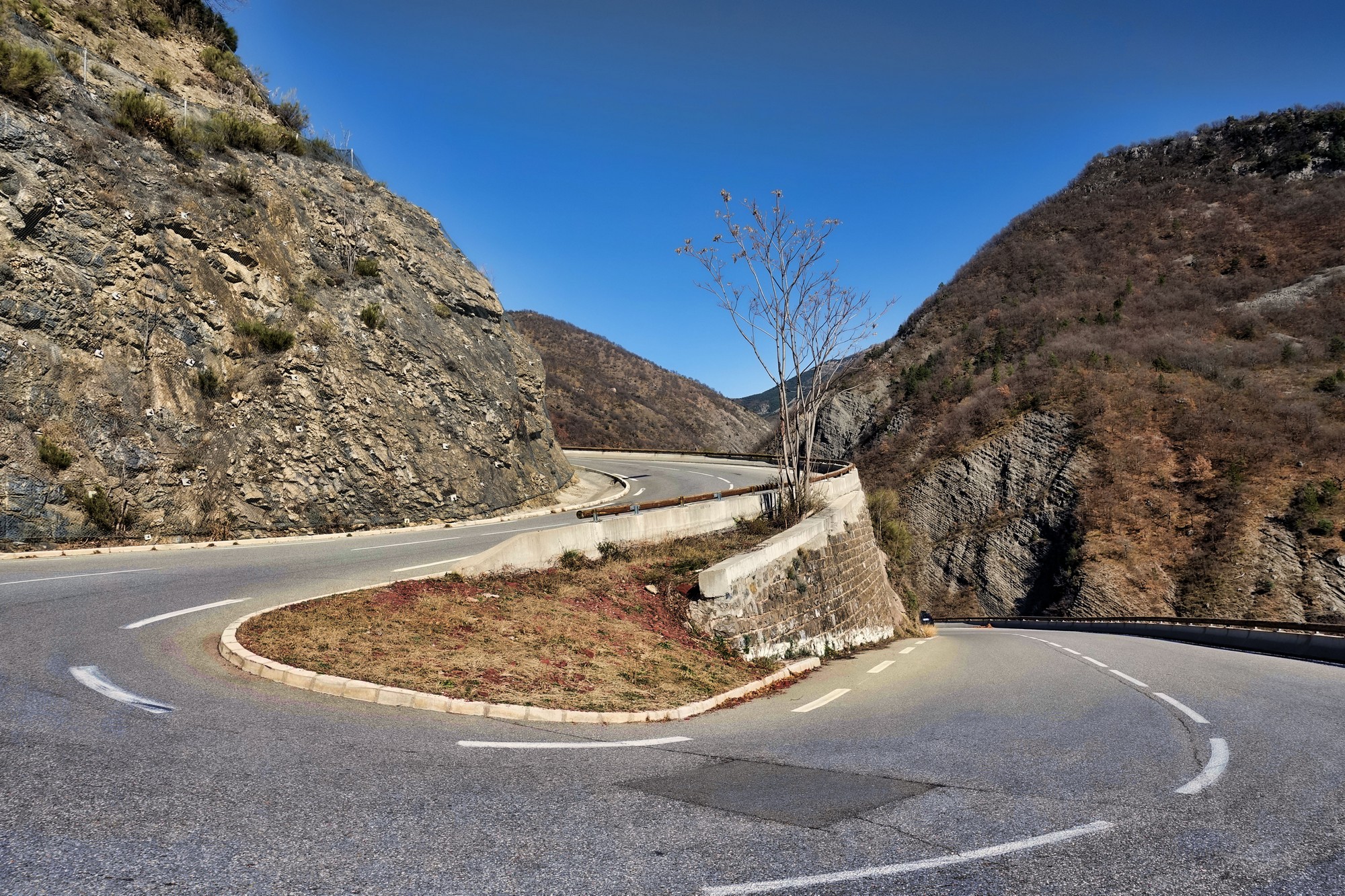 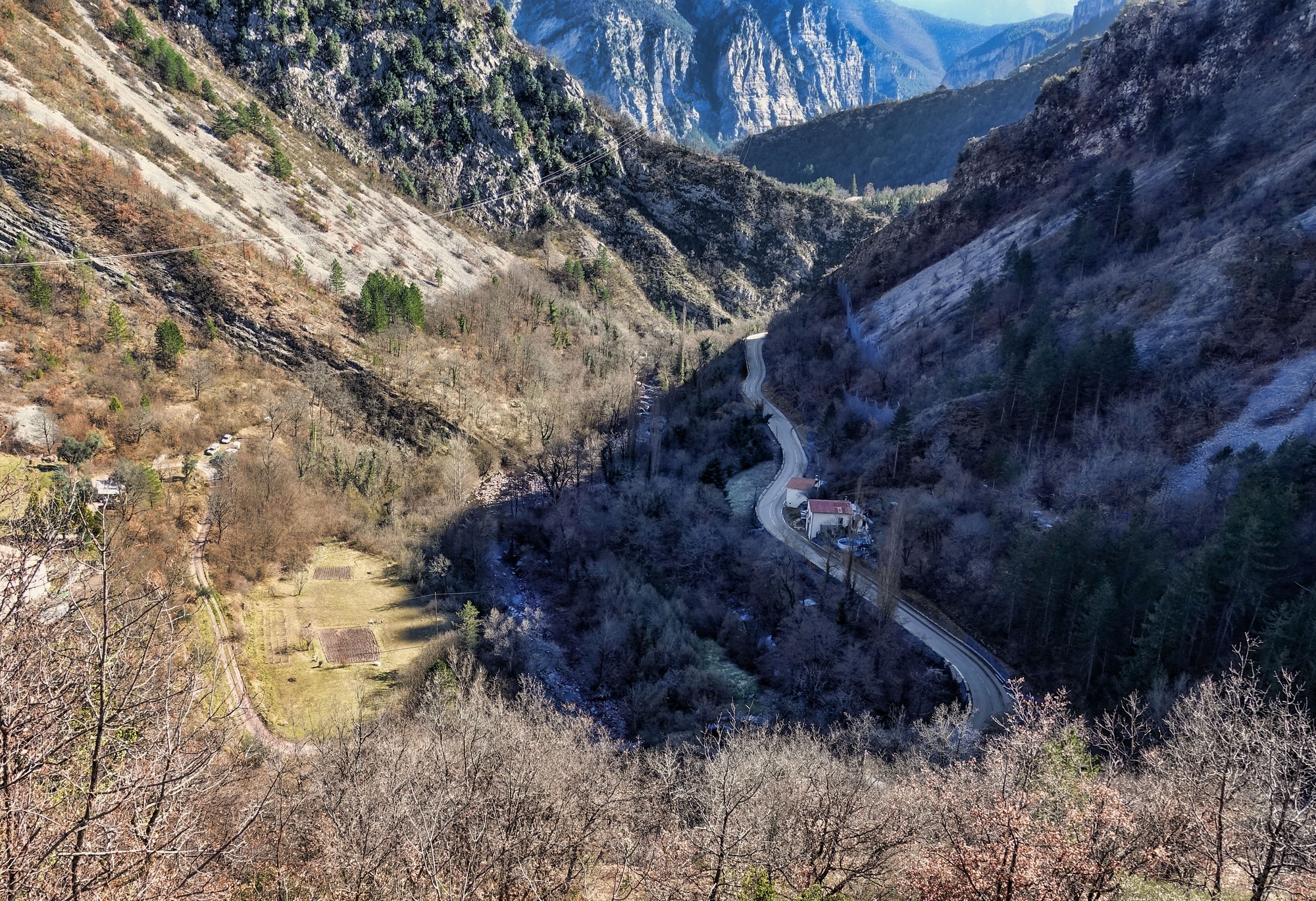 With the constant sound of the river rushing over the rocks in the ravine, this is like a red rock version of Gorges de la Bourne, except this is steeper. 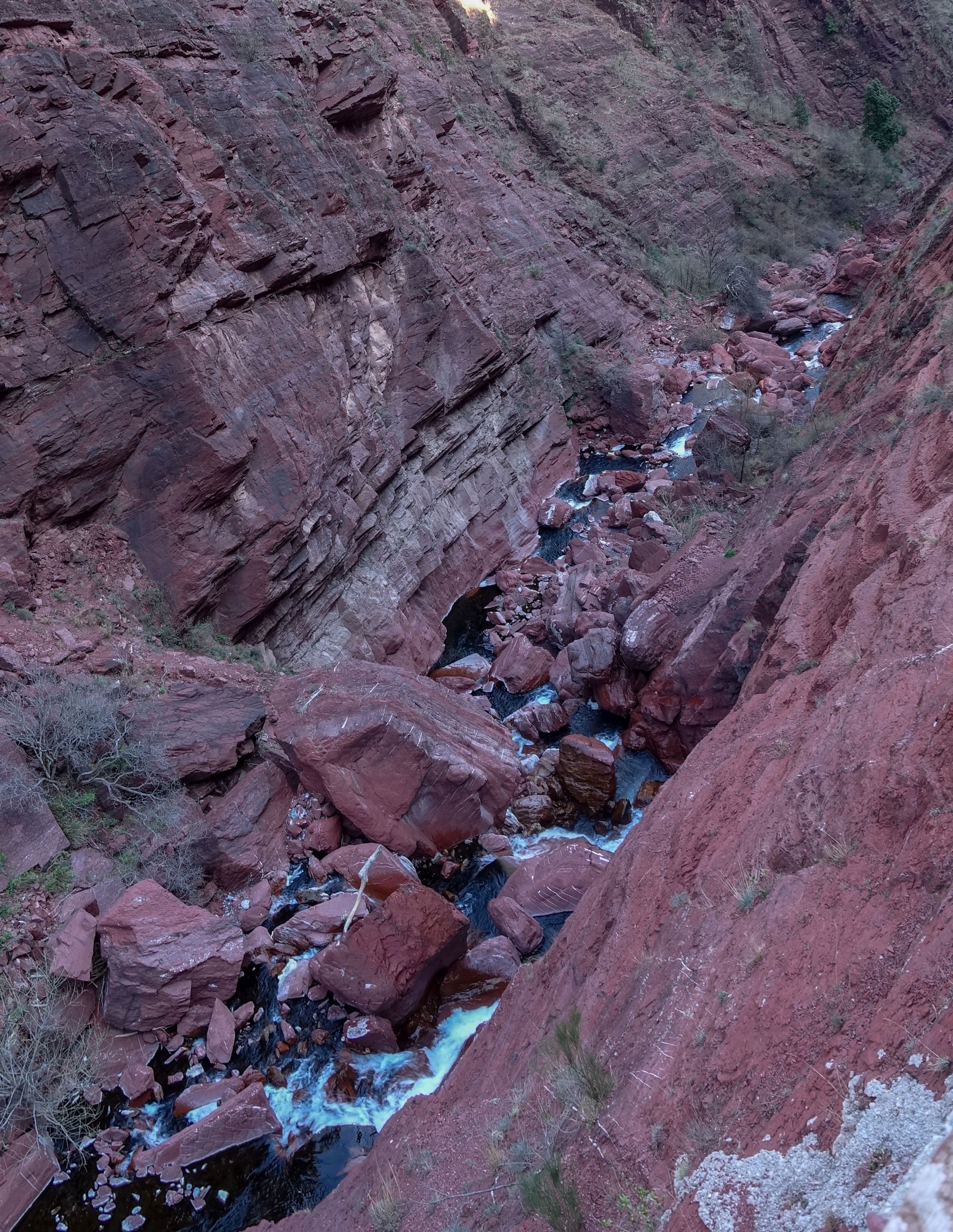 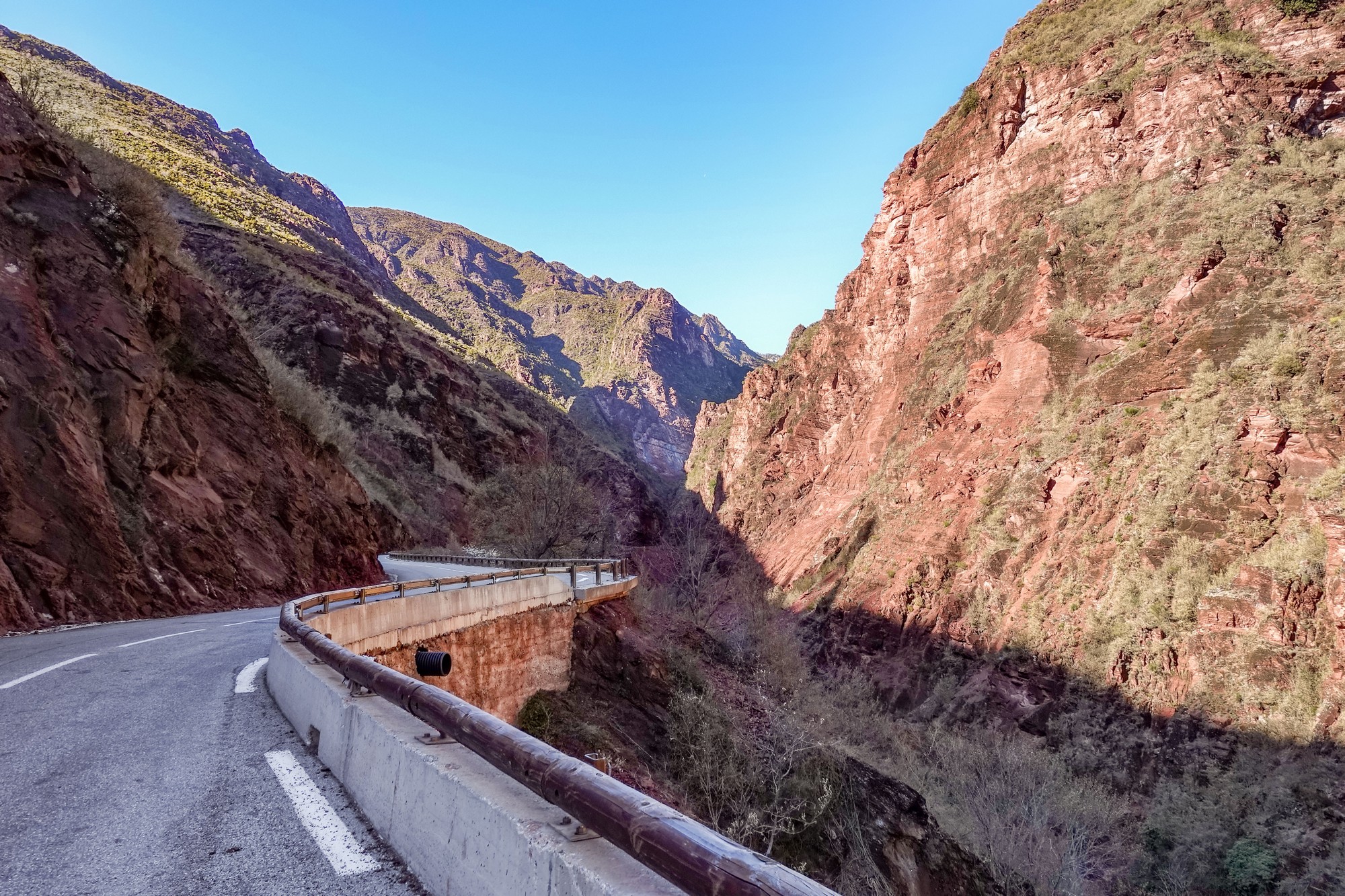 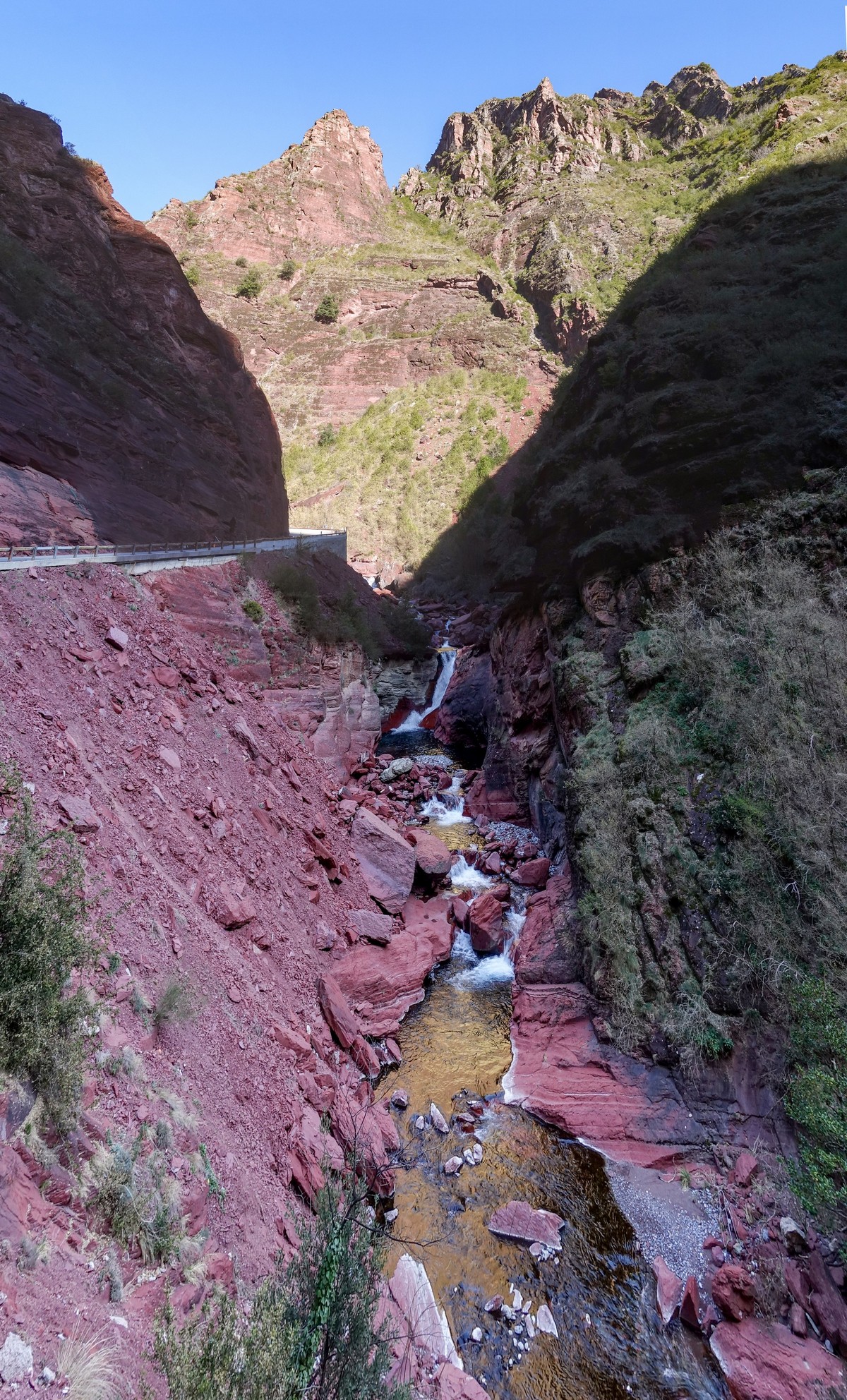 The air is cooler now and the wind is stronger, but the brilliant news is that it’s a tail wind, so it’s helping me up the climb. I’m well aware that the descent could be very cold so I’ll probably put my rain jacket on and my arm warmers under my Jersey and my snood. I’m not necessarily hoping to get all the way to Valberg – in fact that would be almost impossible I think, but I am hoping to get to one of these places where the tunnel takes the road and pedestrians and cyclists can go the scenic route. I keep hoping to see one of those in the distance but it’s just the same picture of a twisty road going up ahead of me – every bend I turn around I see the same scene. 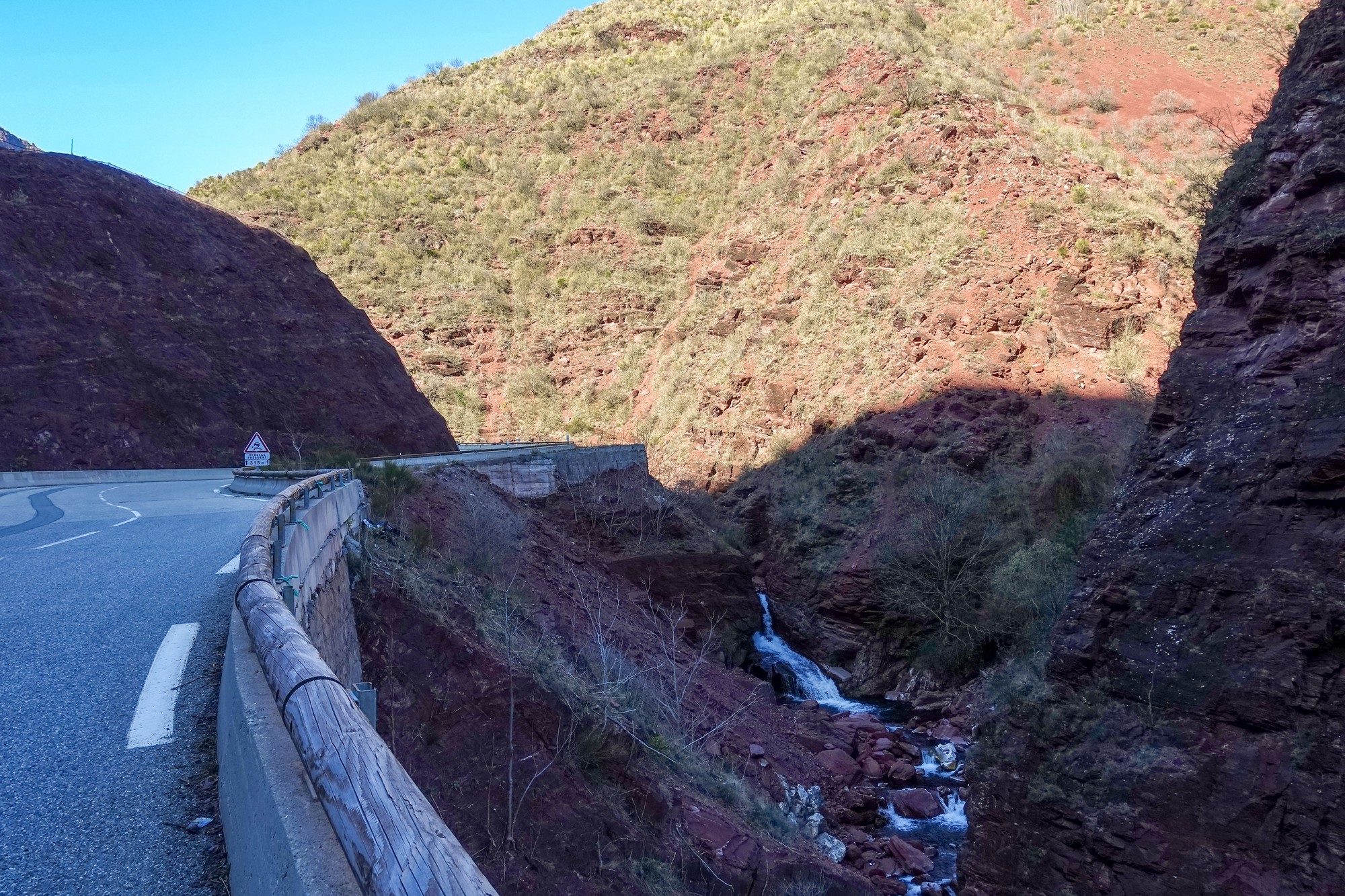 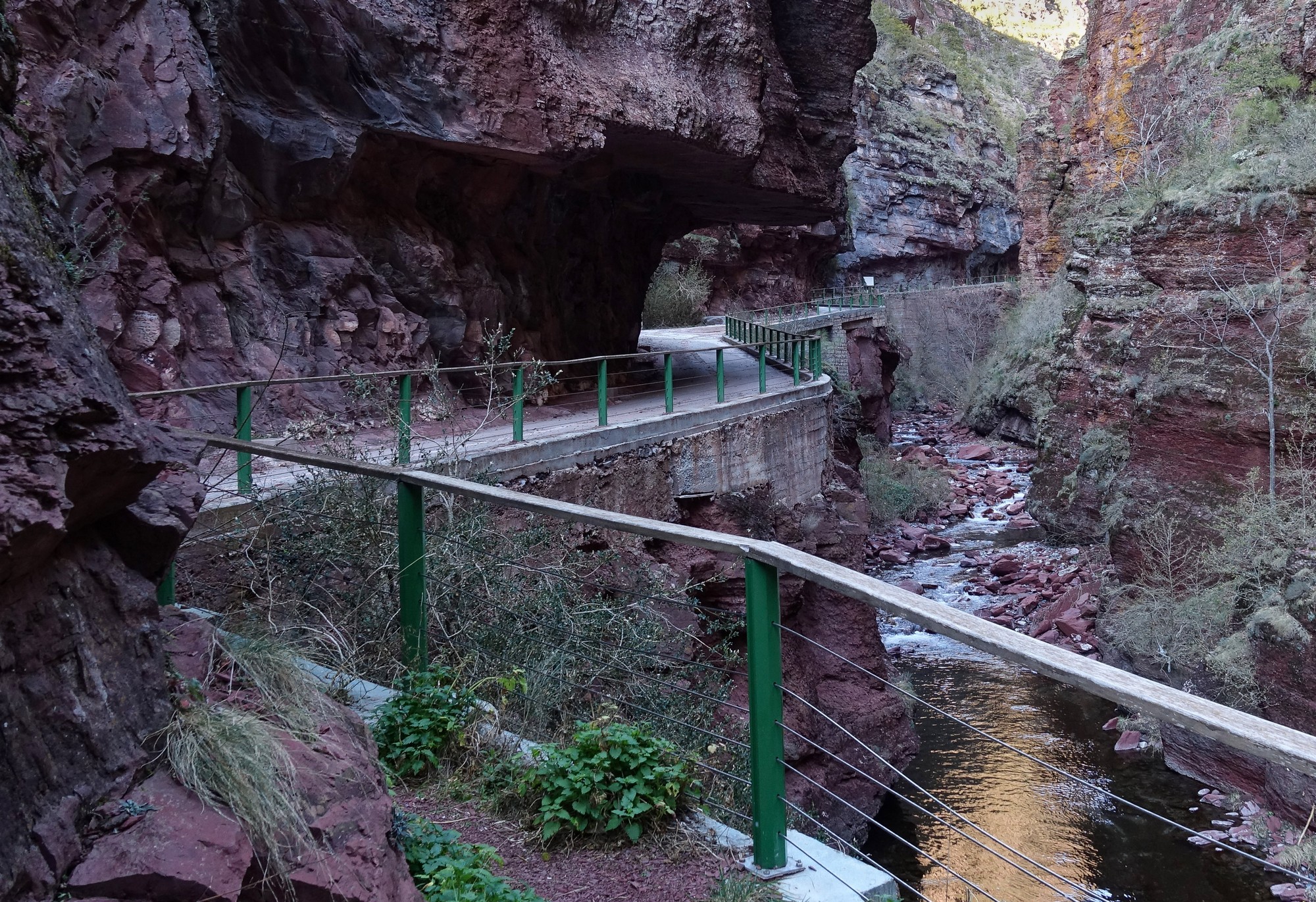 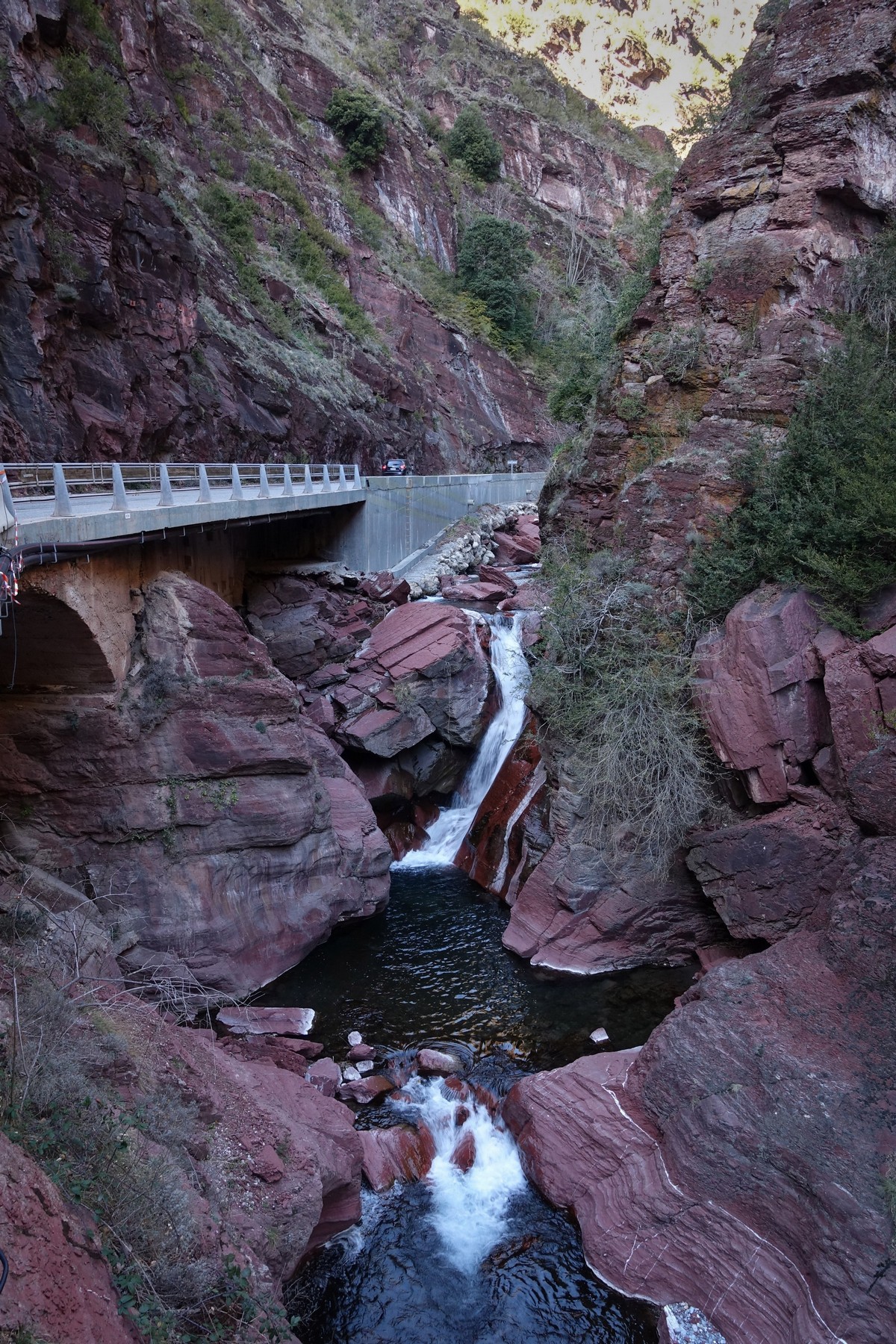 A mile further on I reached La Grande Clue

This one was more spectaular, but started off with a piece of collapsed road 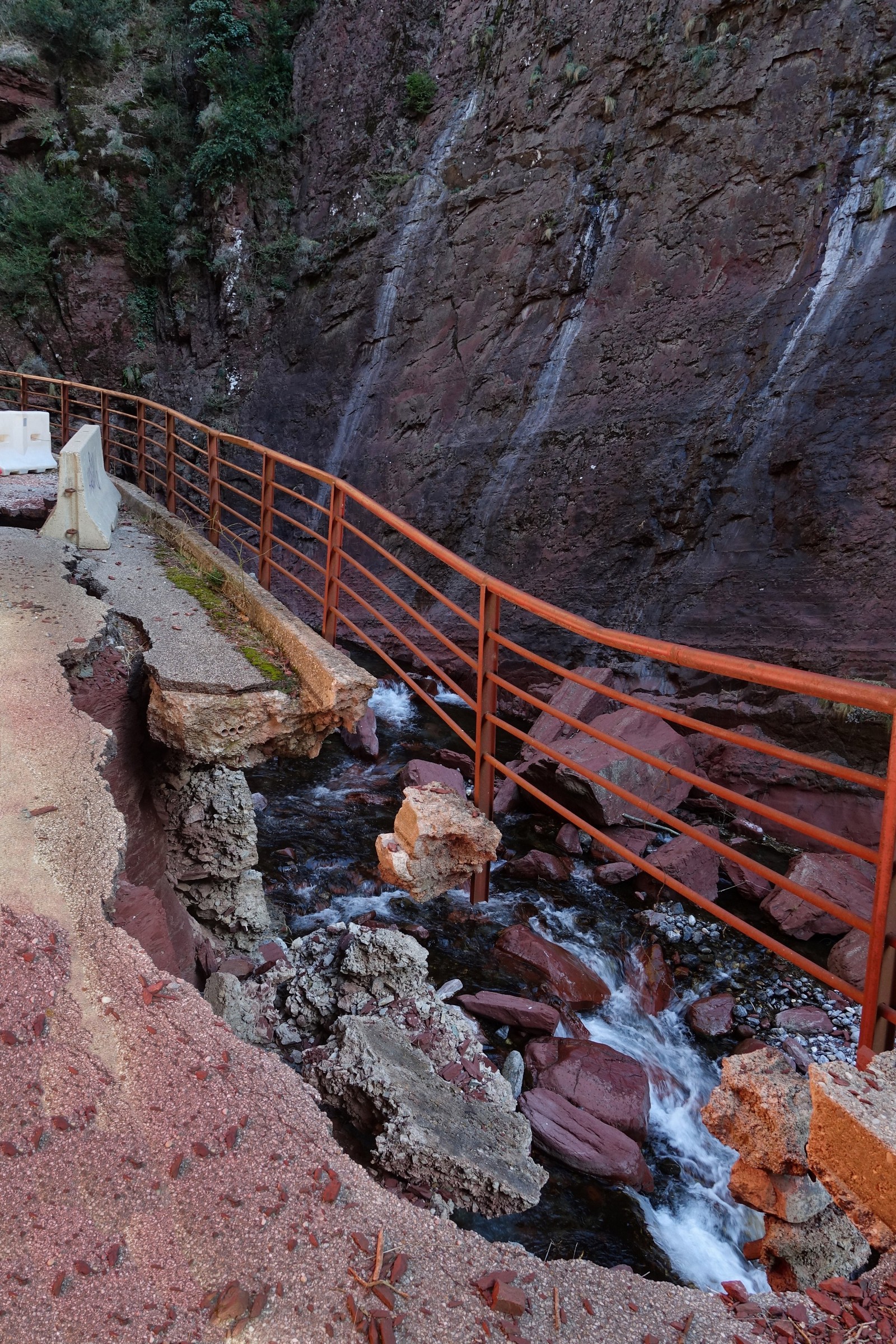 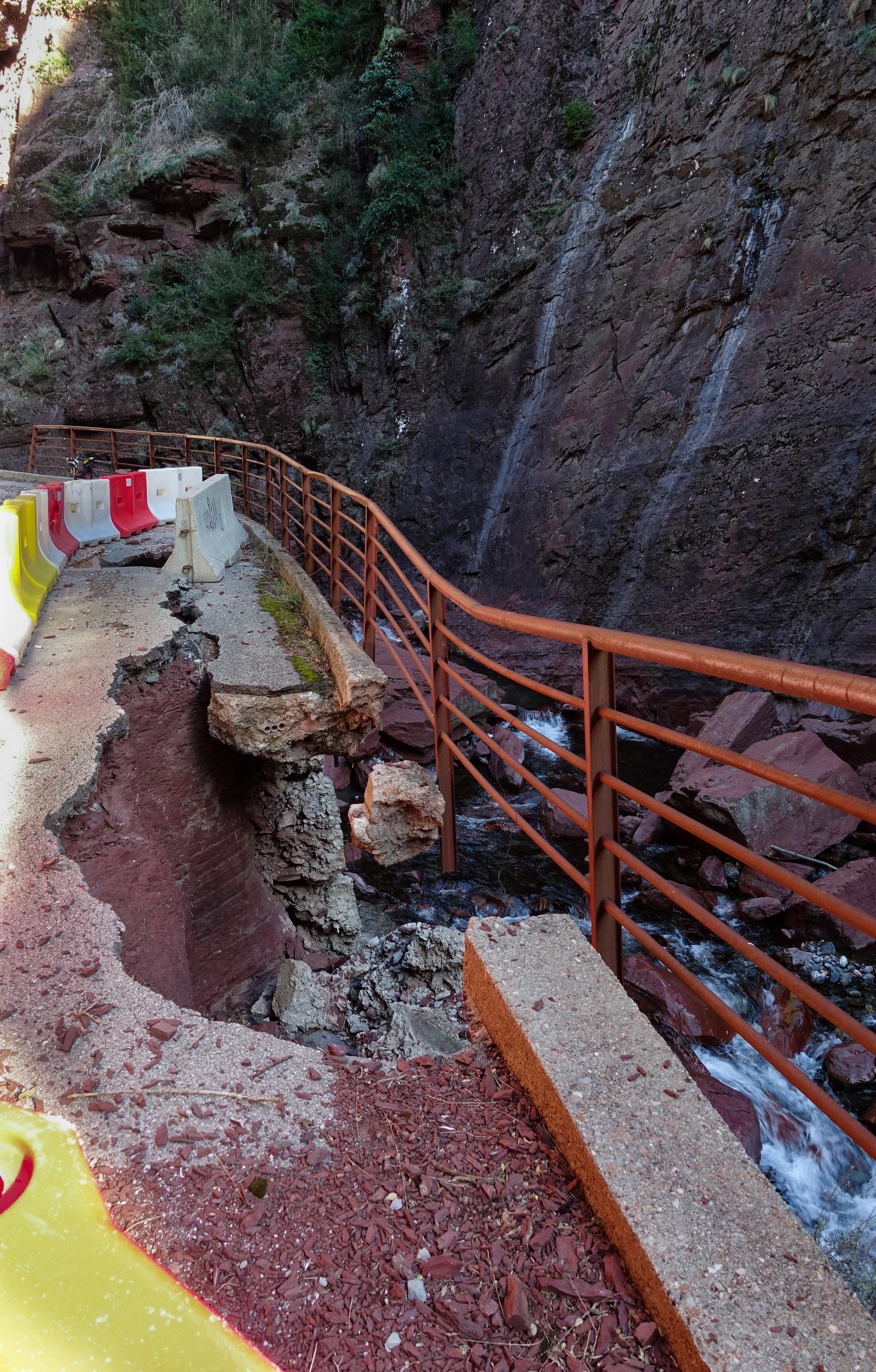 The lighting was so extreme that some highlights were blown-out on my photos, partially because I didn’t pay enough attention to getting them right, partially because of having my shades on. Note to self: If you’re taking photos in somewhere amazing, make sure you get it right!! 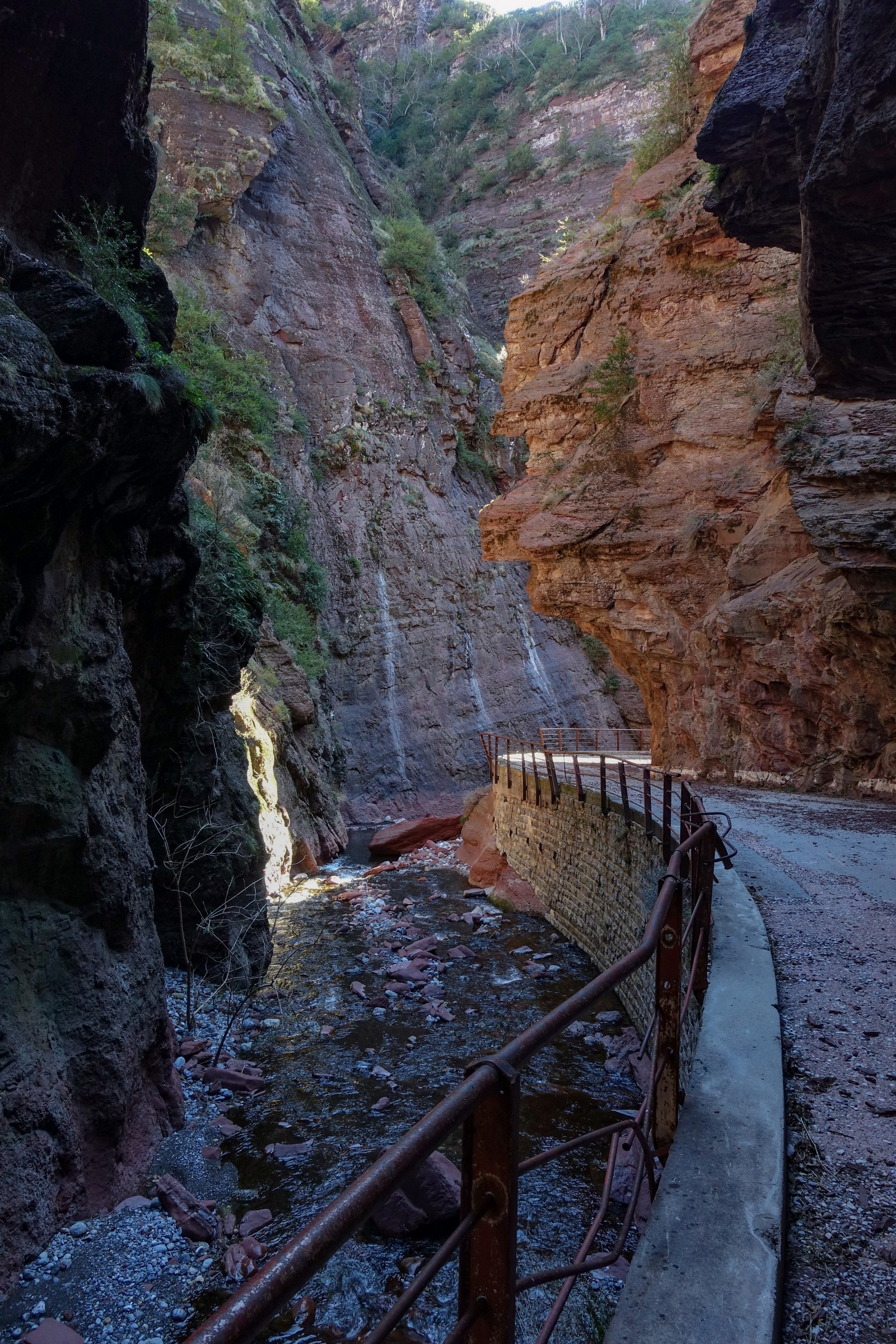 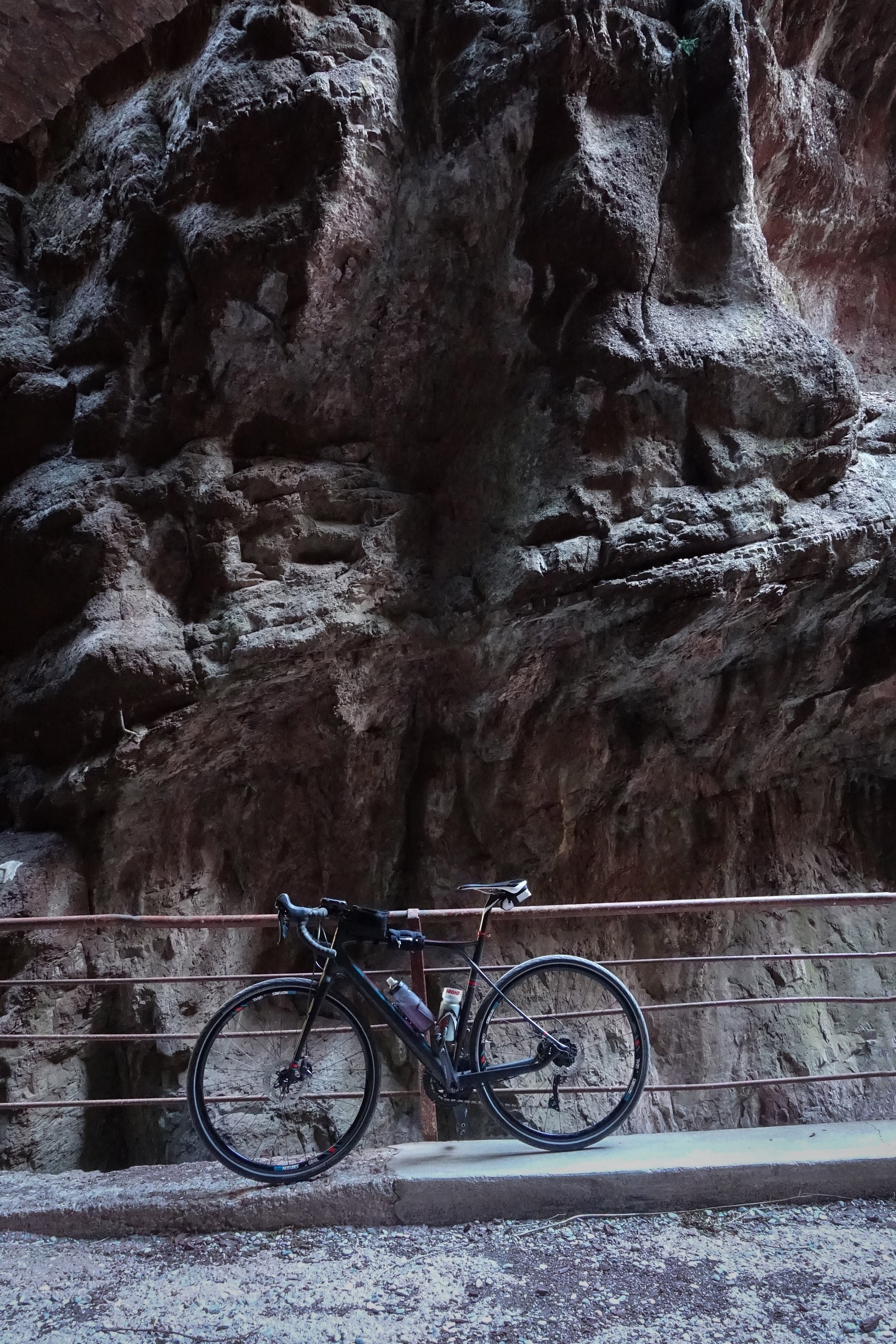 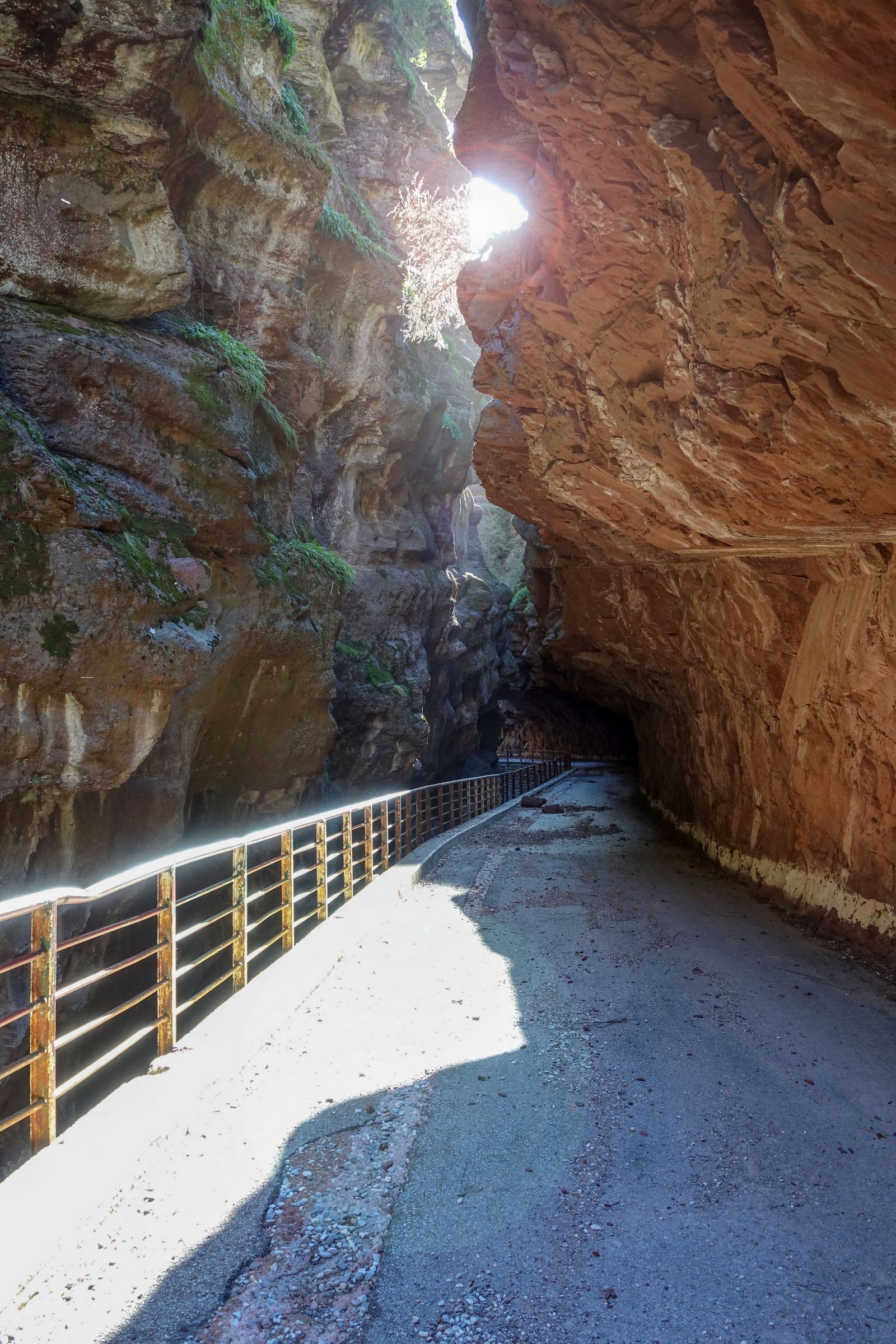 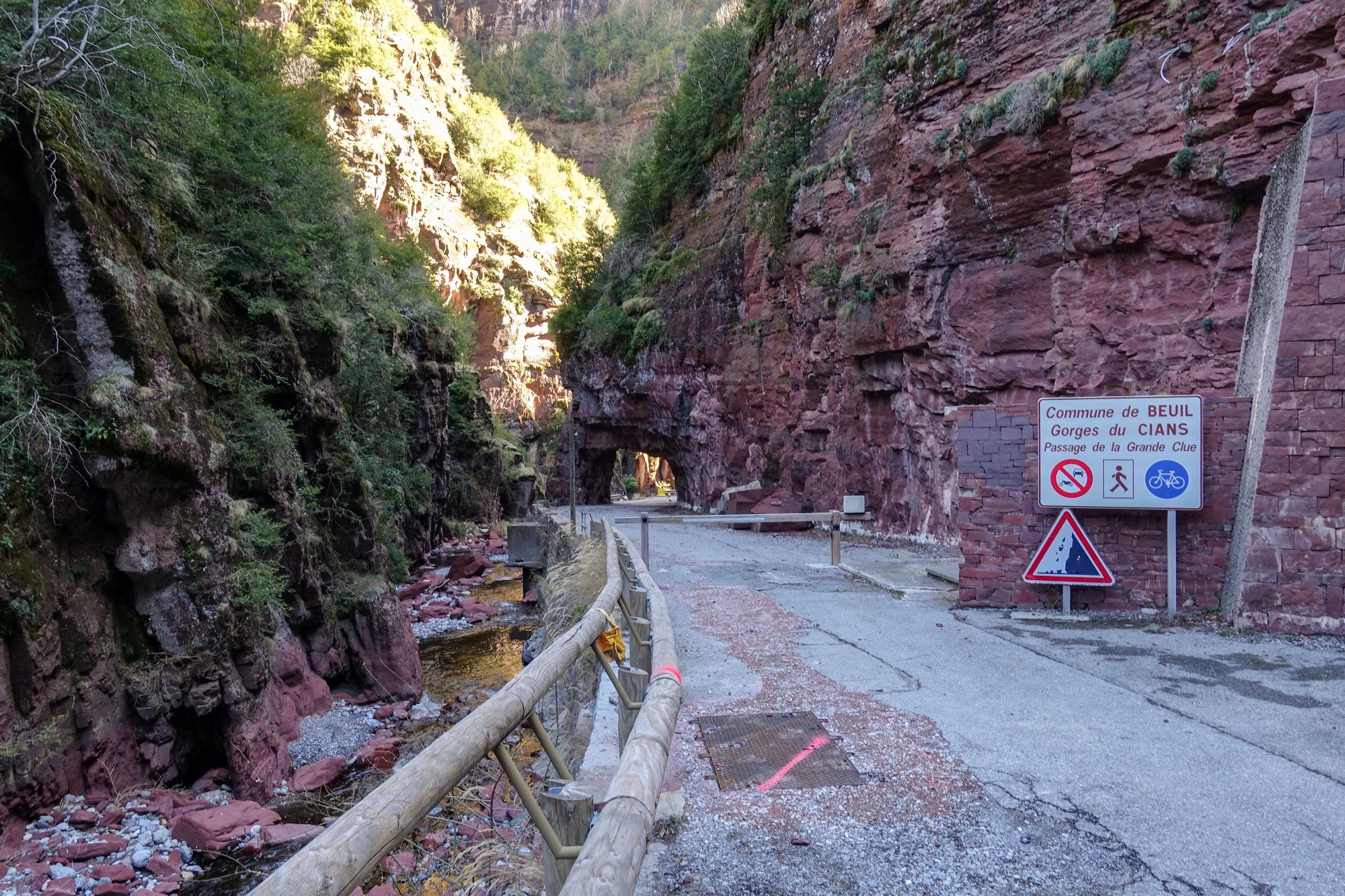 I carried on riding, looking for a spot of sunshine, and came to another clue. This one had suffered from falling rocks which have been left in place to replace the barrier they smashed over the edge There was no signal here. Yes, I have finally found a place in France with no mobile signal, but I had to go to a place with overhanging rocks halfway up a mountain to find it! In UK you can just go to any pub.

So I just recorded my report audibly into my phone:

After that last report I put my extra  bits of warm gear on and started the descent.

The wind was now in my face, but it didn’t slow me down because the road was so steep. It was cold but never unbearable, and slightly warmer near the bottom. In one of the long twisty tunnels, an idiot decided to overtake me on a blind bend inside a tunnel with traffic coming the other way. Luckily nothing happened. I shook my head in frustration, hoping he’d at least be looking in his mirror. I was going at such a rate that I nearly caught up with him anyway, but then around one particular bend I saw a police car stopped, and wondered if there’d been an accident. I soon realised that it’s as close as I’ve come to a live rock fall. Workers were there sweeping it up. If I’d been coming down less than an hour earlier I might have actually seen it happening, which could have been really hair-raising if I was travelling fast at the time. There was hardly any sun on me deep in the gorge. Now and again the evening yellow sun was lighting up the tops of the rocks so I got a few pictures. It really is a spectacular gorge. 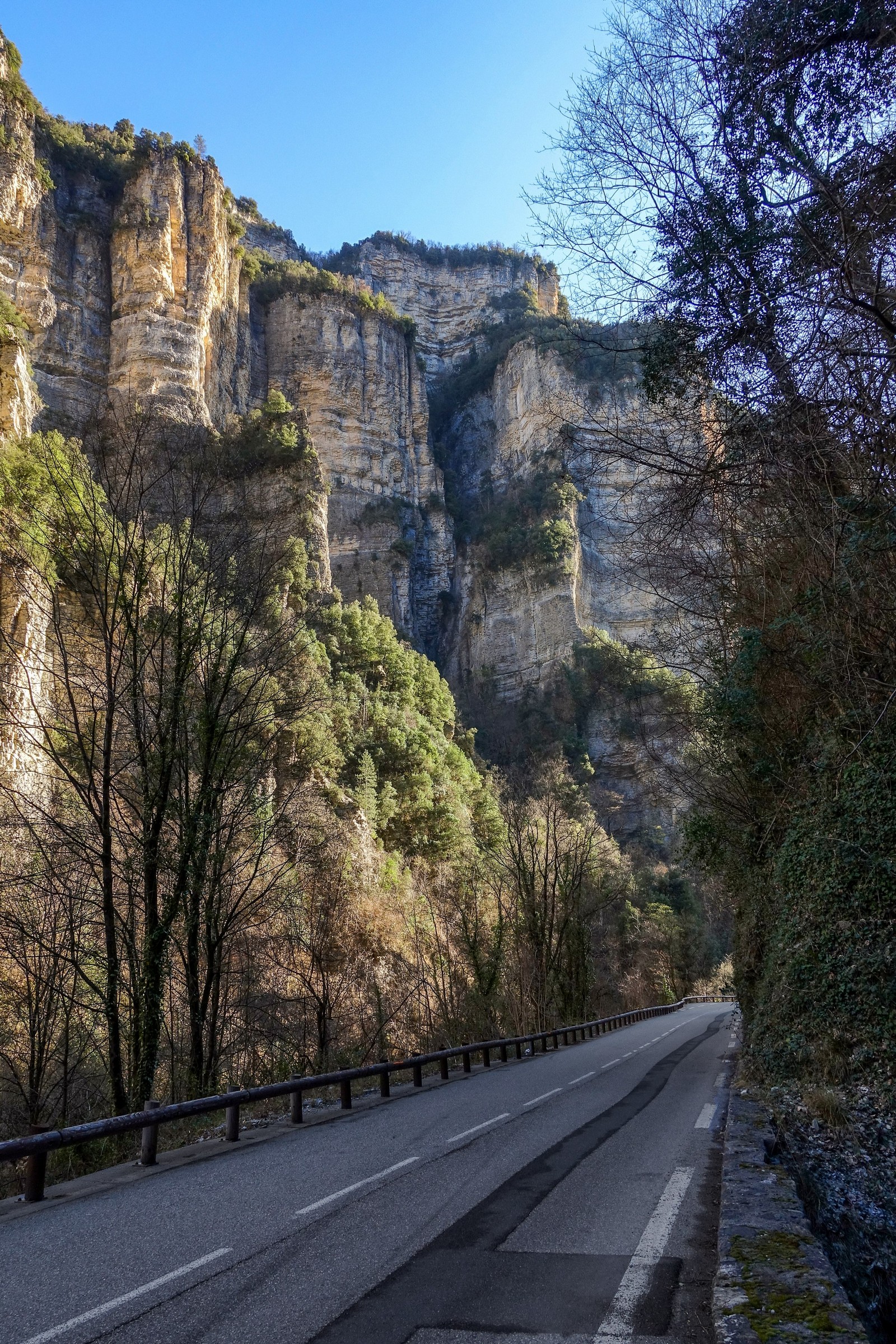 At one point I was thinking it’s the number one in gorges, but I always tend to think that when I discover a new gorge, only for another one to have the same effect on me on a later ride.

Eventually the gorge came to an end and I was on the main road back to Puget Théniers. And now the sun was on me for a nice flat five-mile ride back to base. It had been another great day out. There are so many spectacular rides in close proximity to this relatively unknown town.

After the ride, looking at the map, I realised that the remainder of the climb to Valberg from where I had turned back is less steep than the bit I’d already done today. Worth noting for future reference.