I’d researched the Col de la Sinne early in 2021 after I had spotted the road to Pierlas snaking enticingly along the valley away from the Gorges du Cians during another ride, as seen here.

But today’s route would approach the Col de la Sinne from the other end, over in la Vallée de la Tinée.

I started from Puget-Théniers at just after midday and headed east along the D6202 main road that follows the river Var towards Nice. 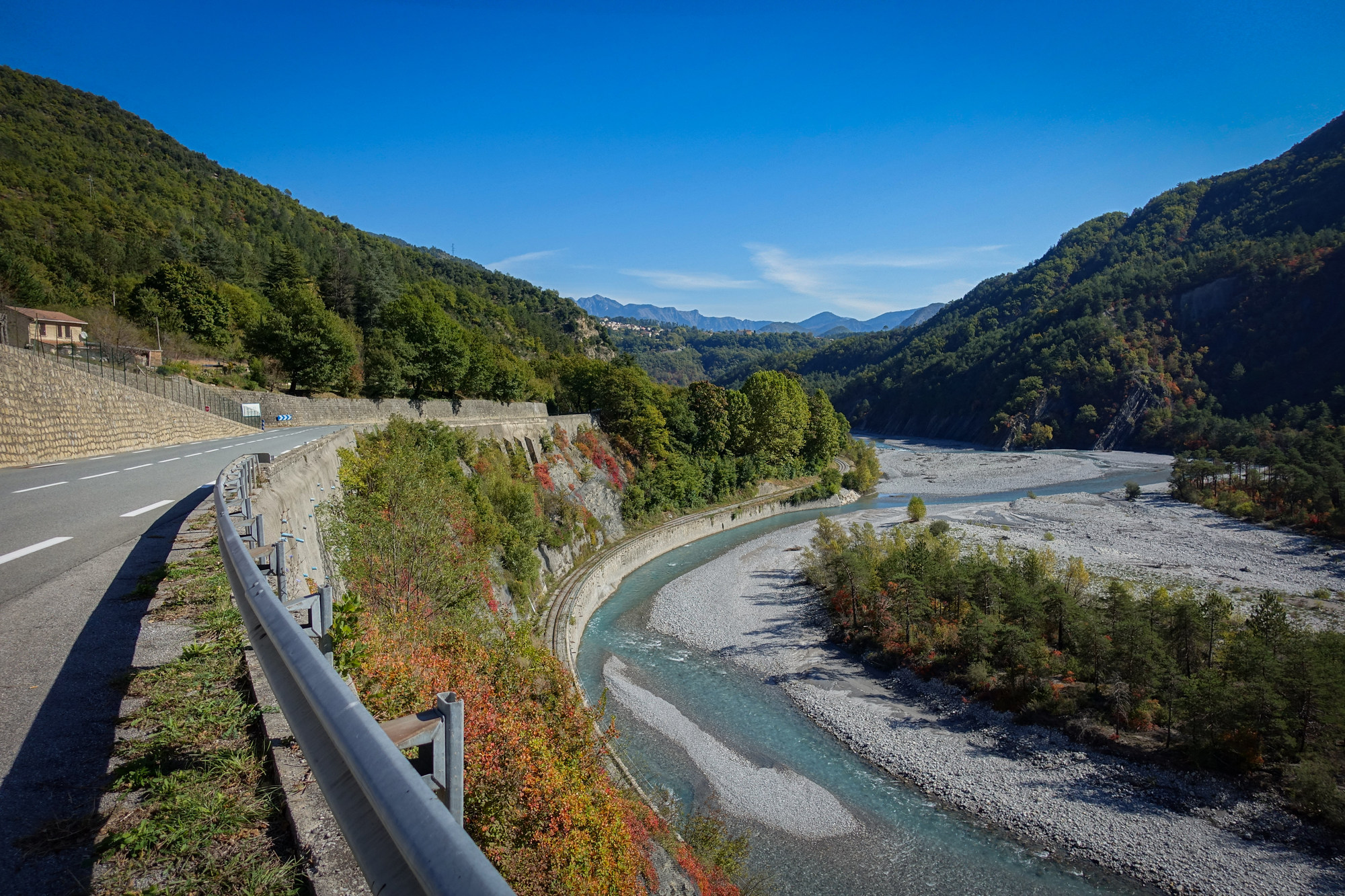 It was a beautiful cloudless day. Riding along that road, it’s easy to make good progress; at some points there are cycle lanes marked on the road but at other times you’re riding close to a low wall on the right, with a sheer drop to the railway tracks below, with fast traffic passing quite close, so it’s a bit tense at times. Needless to say I was very happy to turn off the main road after 12 miles and over the lightweight bridge that led to a peaceful back road with hardly any traffic at all. 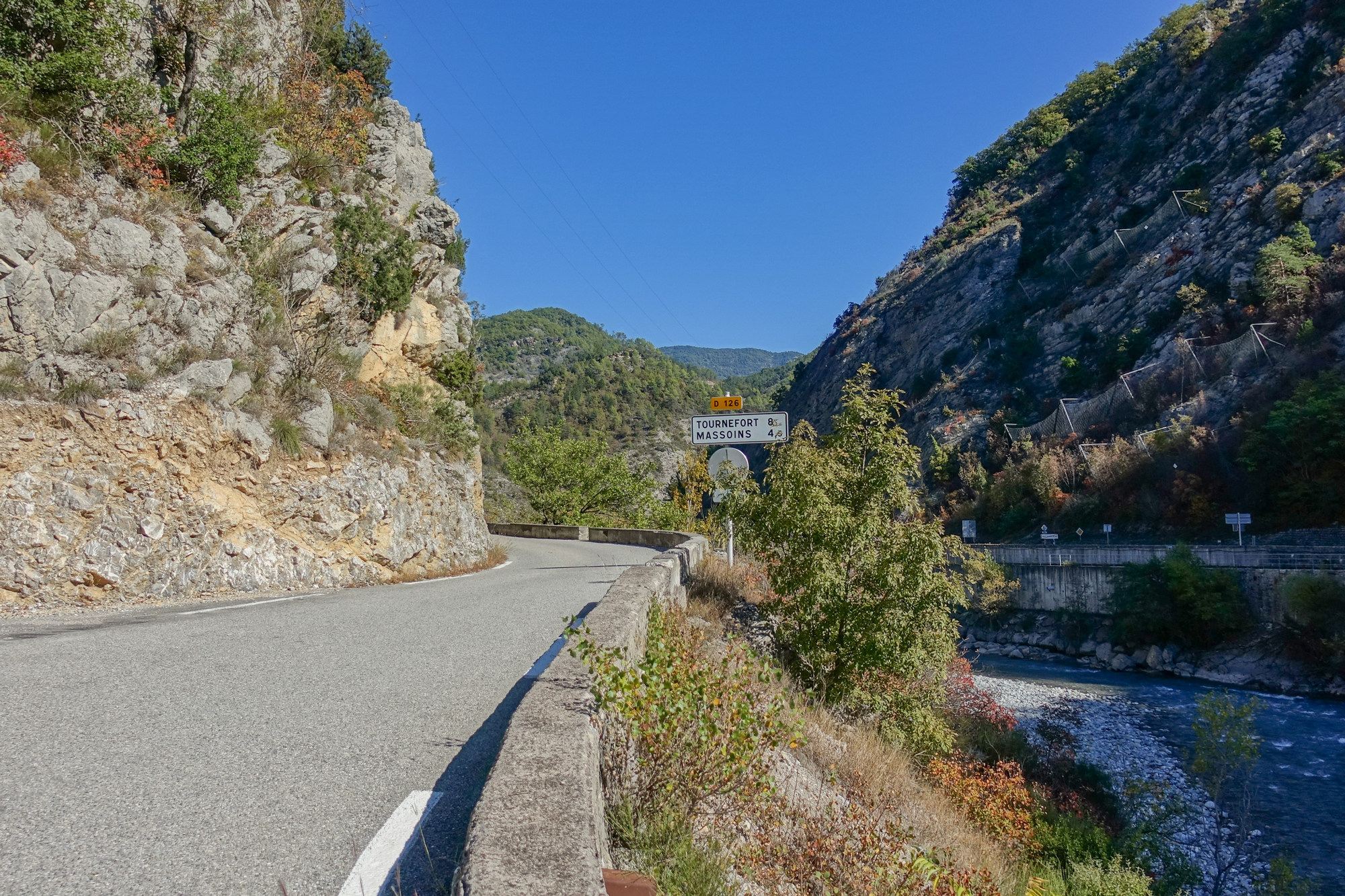 When I came out this morning it was very difficult to know what to wear. The sun was out but the temperature was decidedly fresh. So I chose a long sleeved roubaix top. At first I was going to wear a long sleeve base layer as well but I thought I’d better not, in case it’s too hot, so I put a short sleeve base layer on and took my arm warmers in case I needed them. So on that stretch down the main road, I was at just about the right temperature. Once I turned into the hills I was literally dripping with sweat under all my clothes.

I took my gloves off just to cool down slightly but it’s almost impossible to judge what to wear when there’s so much difference between the hot sun and the cold air in the shade. I took a break at the 18-mile mark and rested on a bench, in the village of Tournefort, at the edge of a boules pitch, or ‘boulodrome‘.

At that point I’d only just reached the top of the first little blip on the elevation profile for the ride, and yet it had been quite an effort, so I was concerned that the big climb of the day would be much tougher. That was still 8 miles down the road.

I used my gravel bike for this ride, and instead of taking my usual (Ultegra) pedals off the Colnago, I’d put the 105 pedals on, but I found them very difficult to clip in and out of, so they probably need adjusting, but I couldn’t be bothered to do it mid-ride. I also noted that the saddle on the GT Grade is just not as comfortable as the one on the Colnago.

As I sat there, eating my banana, the church bell chimed two o’clock, so I was on the hour as usual!

After that rest stop, the road descended all the way down to the main road that follows La Tinée valley.

That main road followed along a lovely gorge, climbing slightly, with the river, until I reached my turn off, which turned back and down and over a small bridge across the river, and then straight into the climb.

As I climbed up the side of the valley I noticed places on the hills opposite that previously had looked ridiculously high above me now started to come down level with me, and then dropped below me as I continued to gain altitude on them.

The road was very quiet. 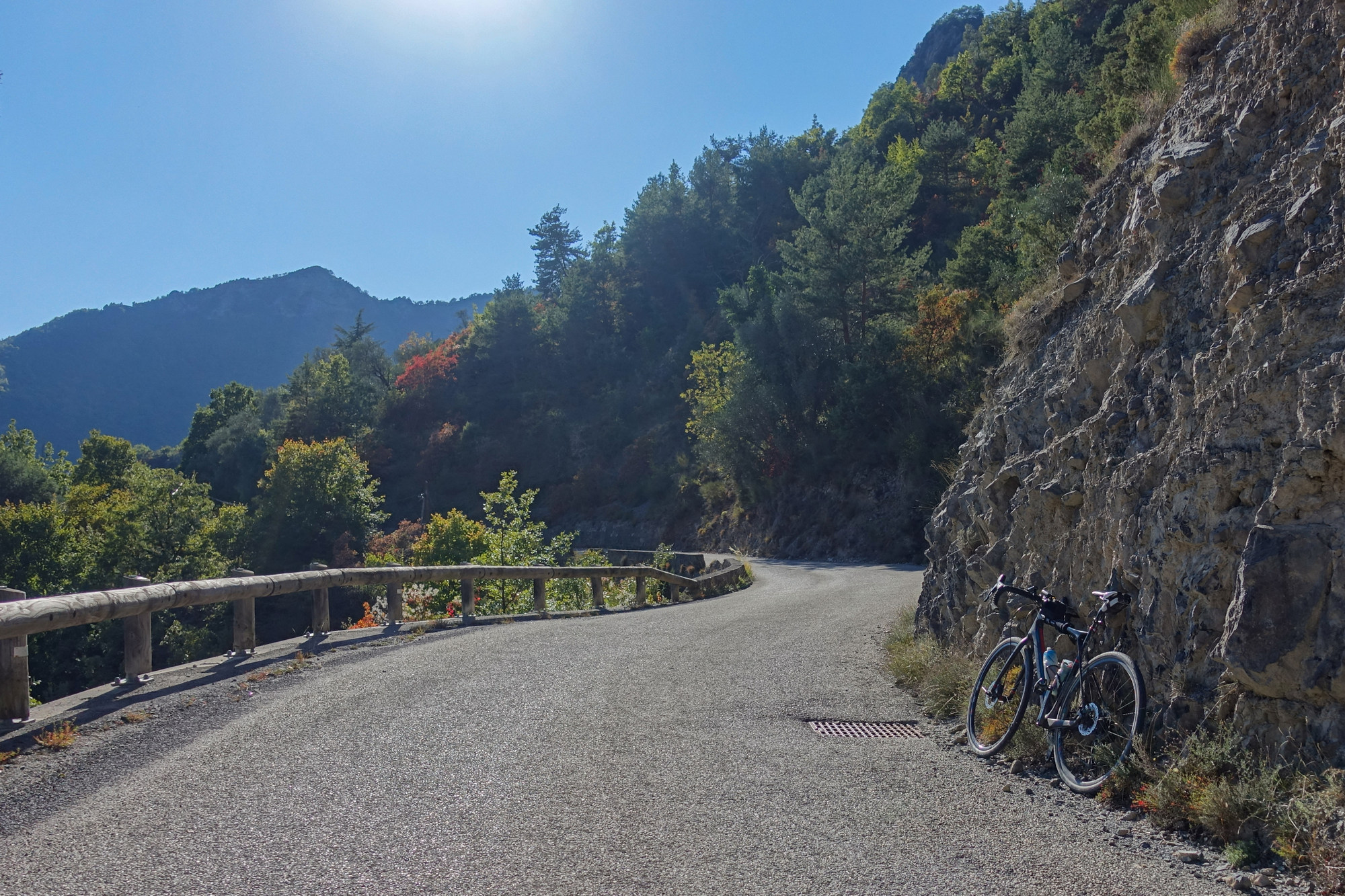 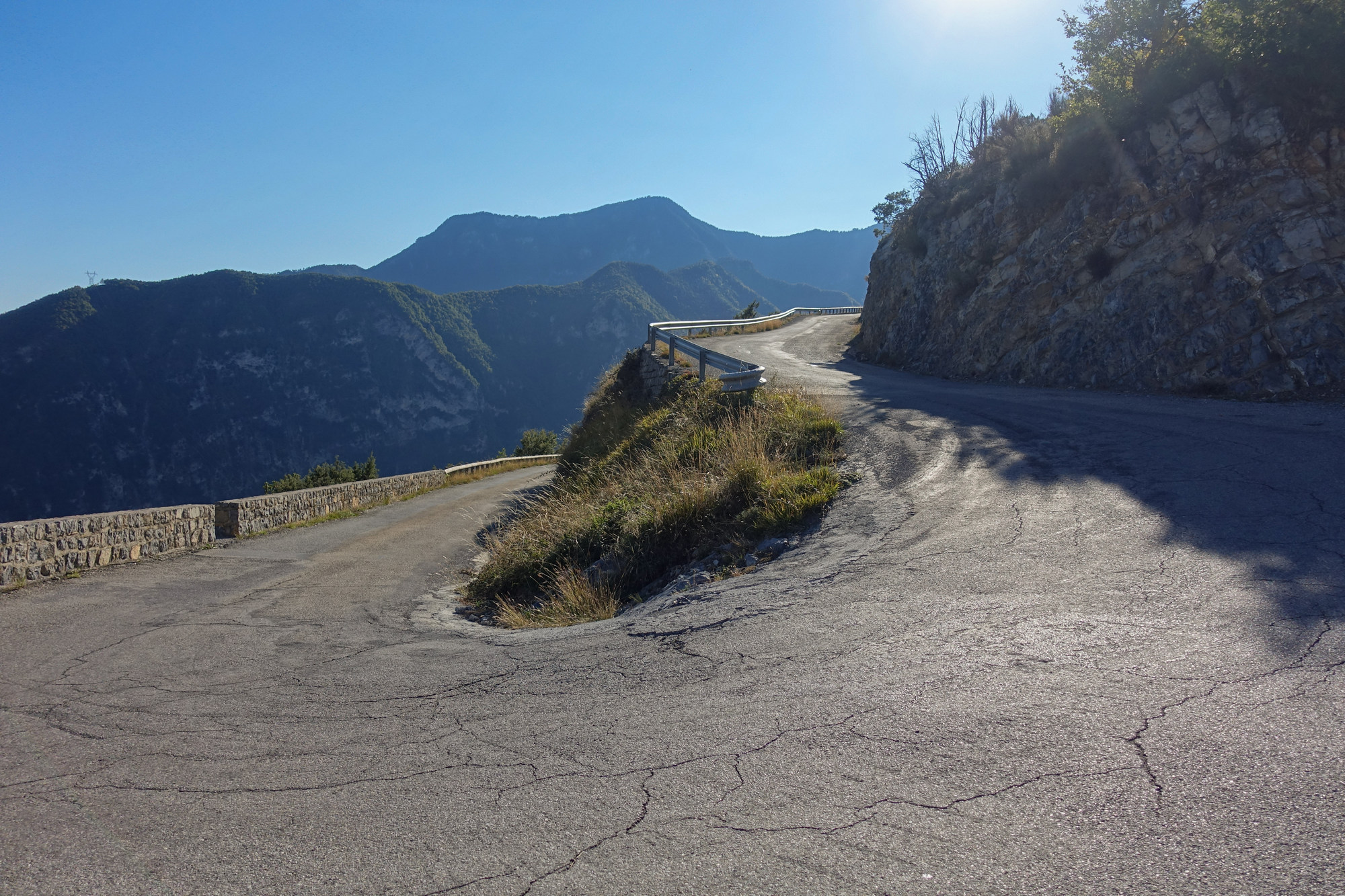 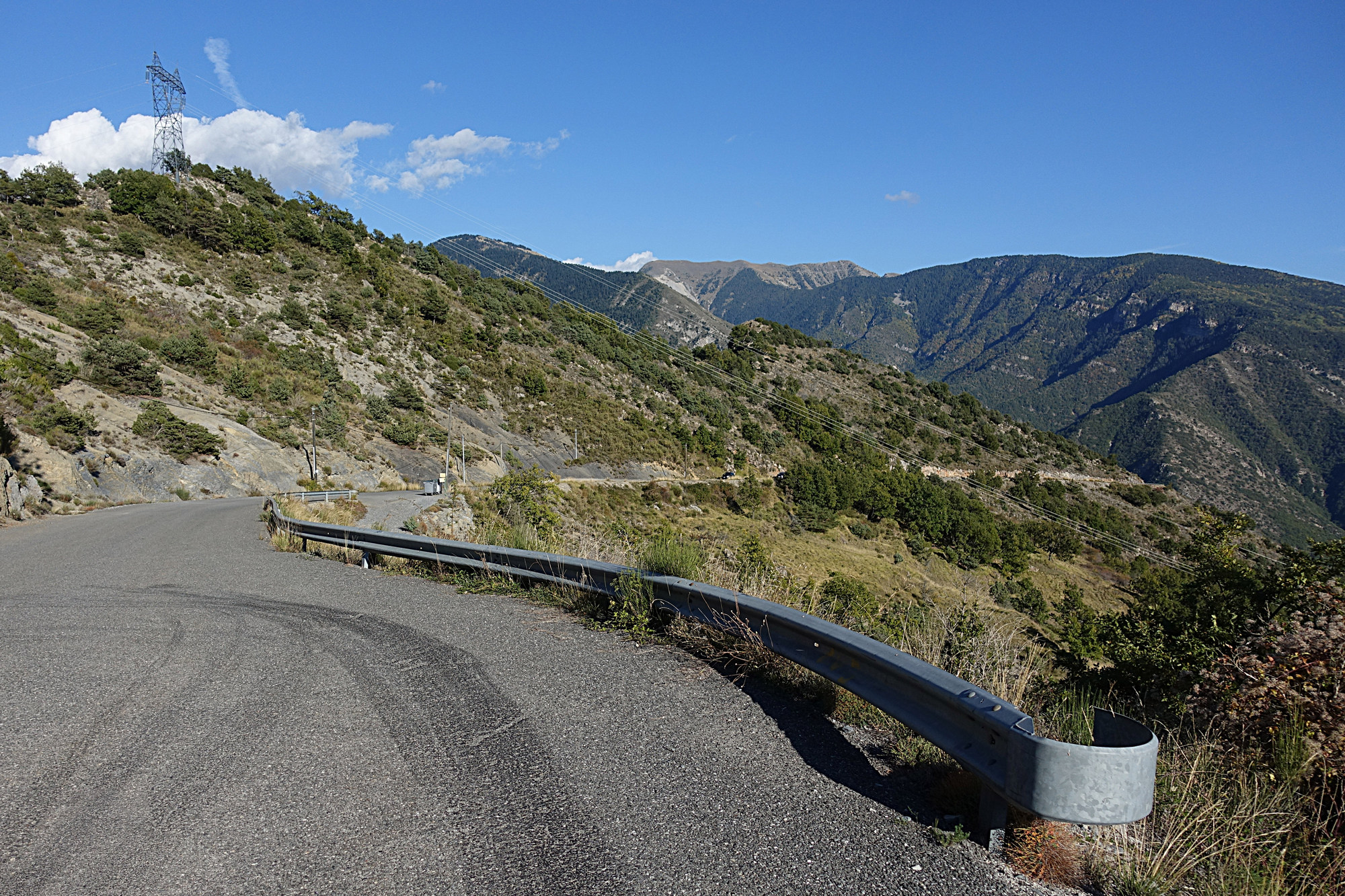 Every now and again there was a glimpse of La Tinée valley. Judging by the shape of the hills ahead, I felt like I was approaching the top of something, but there were still four and a half miles of climbing to go. I wasn’t feeling too bad. I’d had two energy gels and would have another one before the top. I took another break at 29.3 miles and had my sandwich.

There was a lot of embedded maths, as usual, on this ride. The main points were the 12-mile turn off, and the climb from the 25-mile mark for 9 miles until 34 miles, after which it was all downhill. I rationed my energy gels to one every three miles of the climb.

After setting off again, the climb inevitably started taking its toll on me. The sun was baking down, the pedals turning slowly, relentlessly. It gets so frustrating looking at the elapsed miles on the Garmin. Sometimes I deliberately tried to not look at it, hoping that when I next did, the mileage would have gone up considerably – it never did – always frustratingly there were miles to go to the top. I had my last energy gel on schedule with about a third of the climb left. As I trudged up the climb I found myself thinking “Never again”, “don’t underestimate these climbs”, “the next ride will be a flat one”, etc, etc.

Eventually I rode into Ilonse (ILONSE), a small village up in the hills, which still manages to have its own tennis court! A group of people in hi-viz jackets were milling about the place. I think they were walkers, having finished a group walk. I said bonjour as I rode through them. They shouted words of encouragement “Allez! Allez!”, etc. Just as I was leaving the village I noticed a water fountain, so I asked someone if it was drinking water. It was. So I filled my bidon. This was a geat help for the rest of the ride. 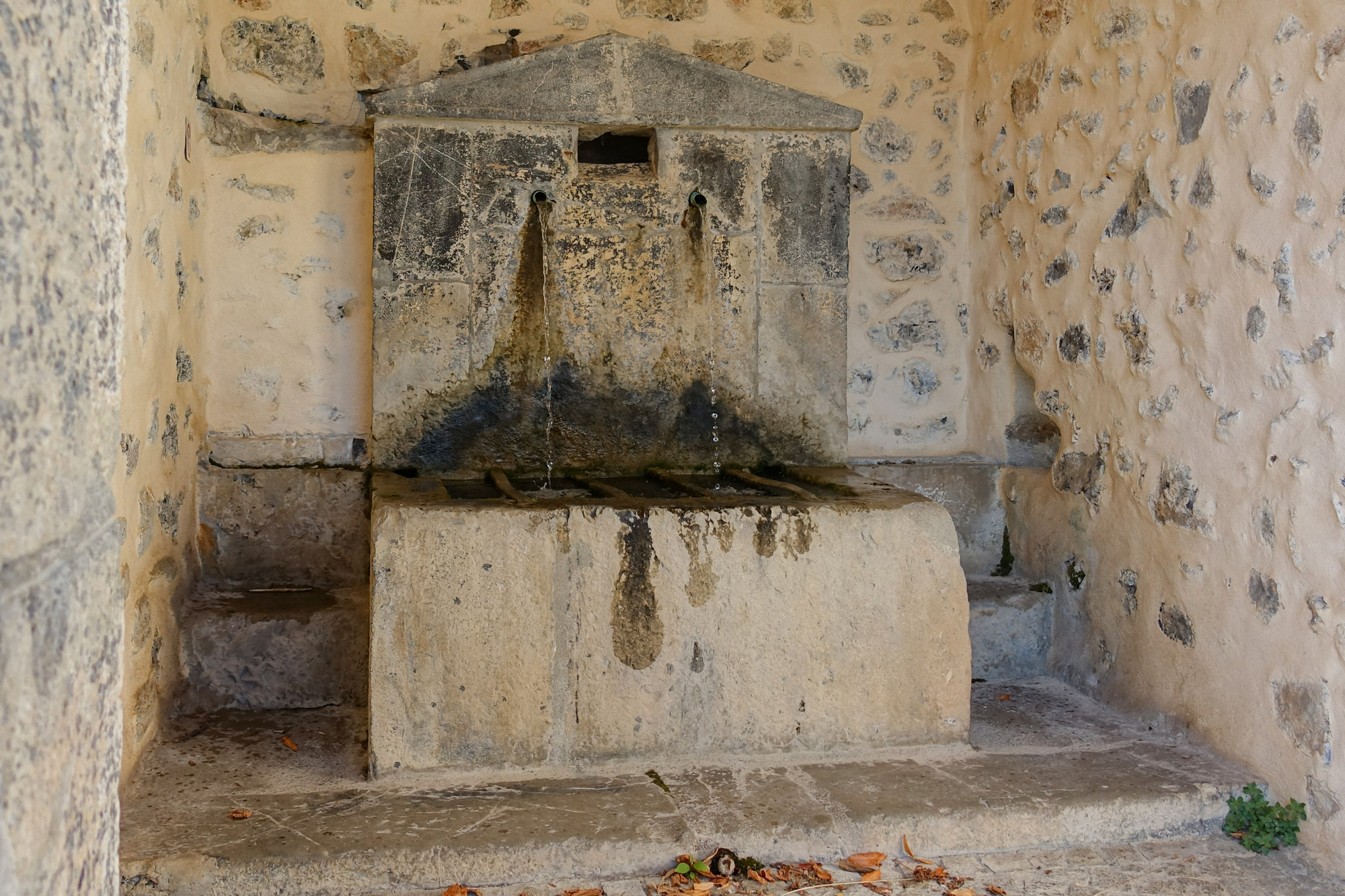 The road out of Ilonse looked more like a track at first, but it did improve after that. A few hundred metres later, I rode past a group of women, also in hi-viz, and also seemingly walkers. Usual “Bonjour”s. One of them asked if my bike was electric, looking suspiciously at my bike – “non, pas électrique” I said. That seemed to elicit praise from them as I rode away. So electric bikes have now reached the public consciousness, but still viewed somewhat as cheating, it seems.

At that point there were 2 miles to go to the col, mostly at 8%, easing off near the top. I kept looking up to see the road climbing inexorably ahead of me.

Those 2 miles took 26 minutes! At the time, it felt like hours! I stopped for a few breathers I think. (It reminded me slightly of the slow climb to Col de Tende.) 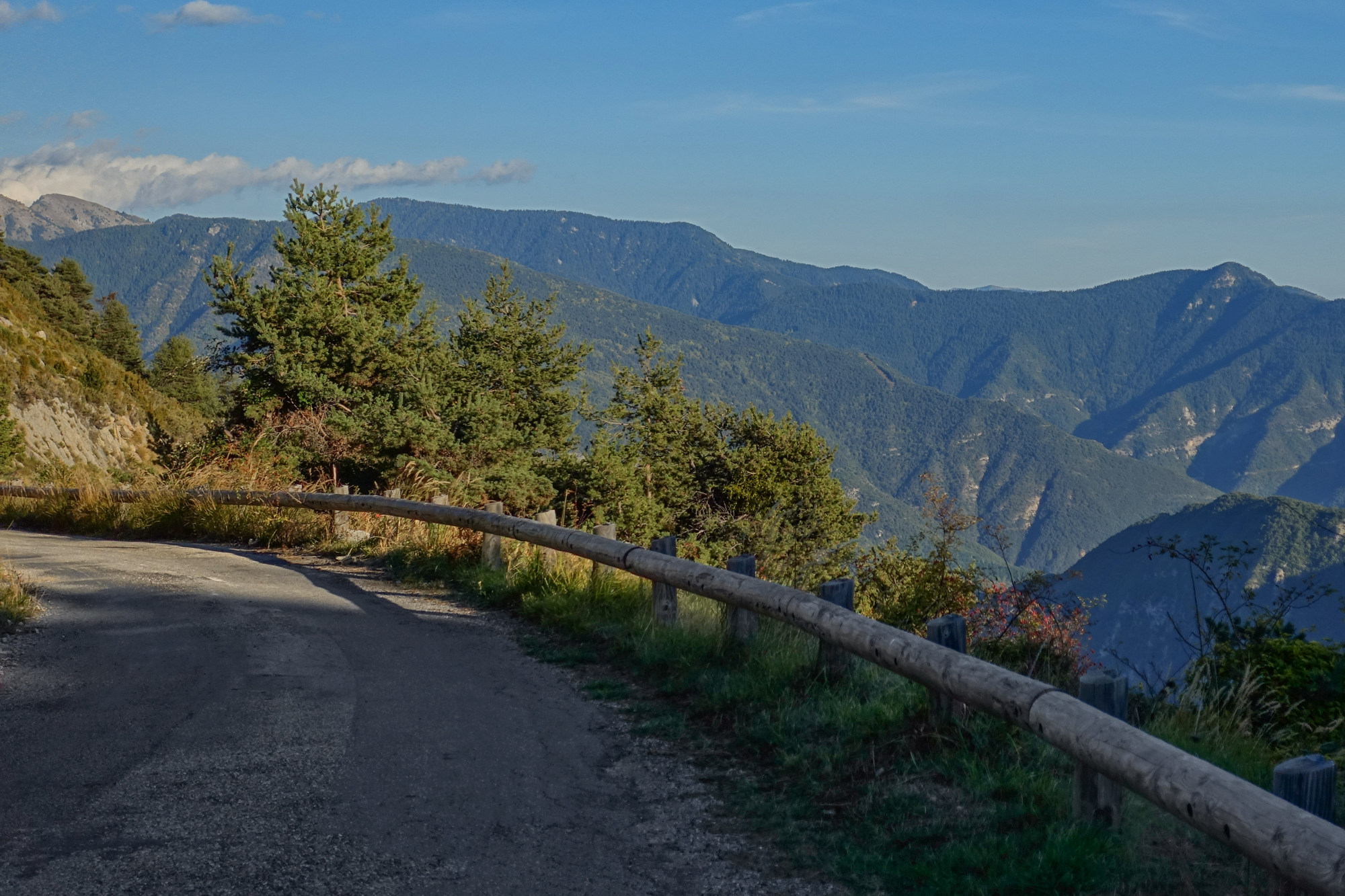 And then I saw a signpost and knew that just around the bend was the pass. There were a few parked cars, some walkers and information boards around. I had made it to the Col de la Sinne! 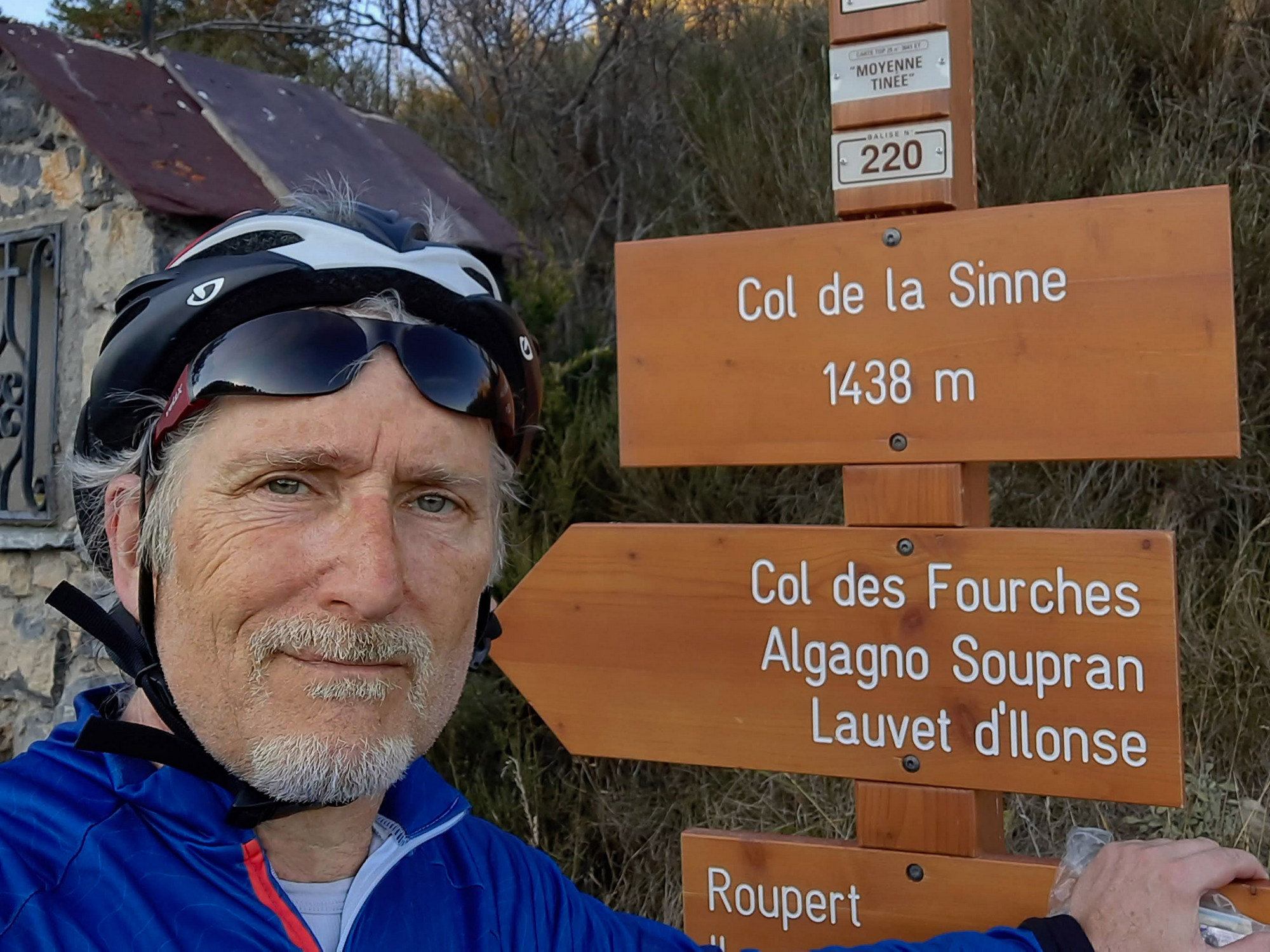 I got the obligatory col sign photo, then put on my arm warmers (under my long-sleeved jacket), snood, skull-cap, rain jacket and my gloves (which had been stuffed in my back pocket). There was not a breath of wind at the col.

And so began the descent.

What an incredible road the next seven miles are, down to the also remarkable Gorges du Cians. 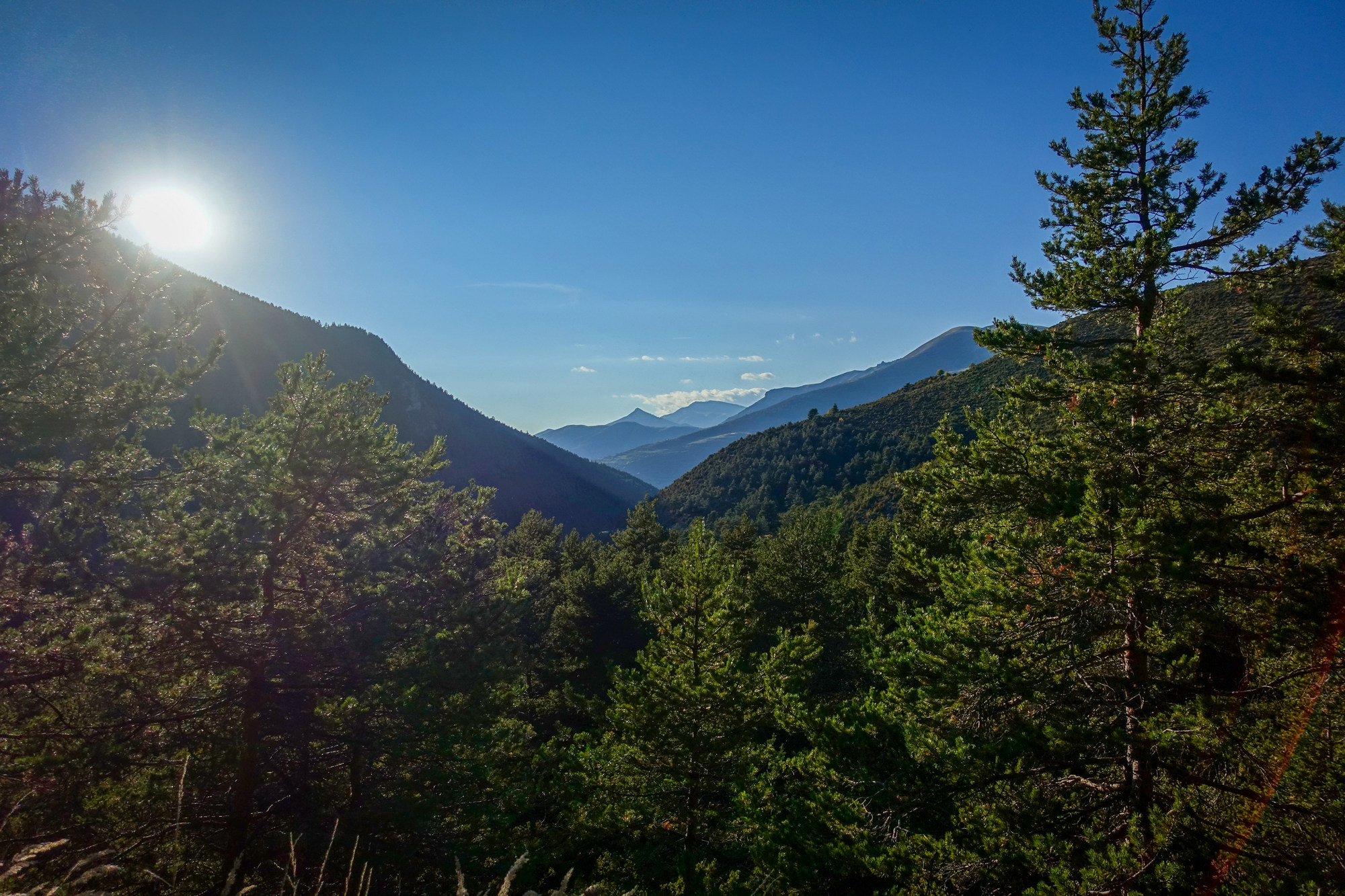 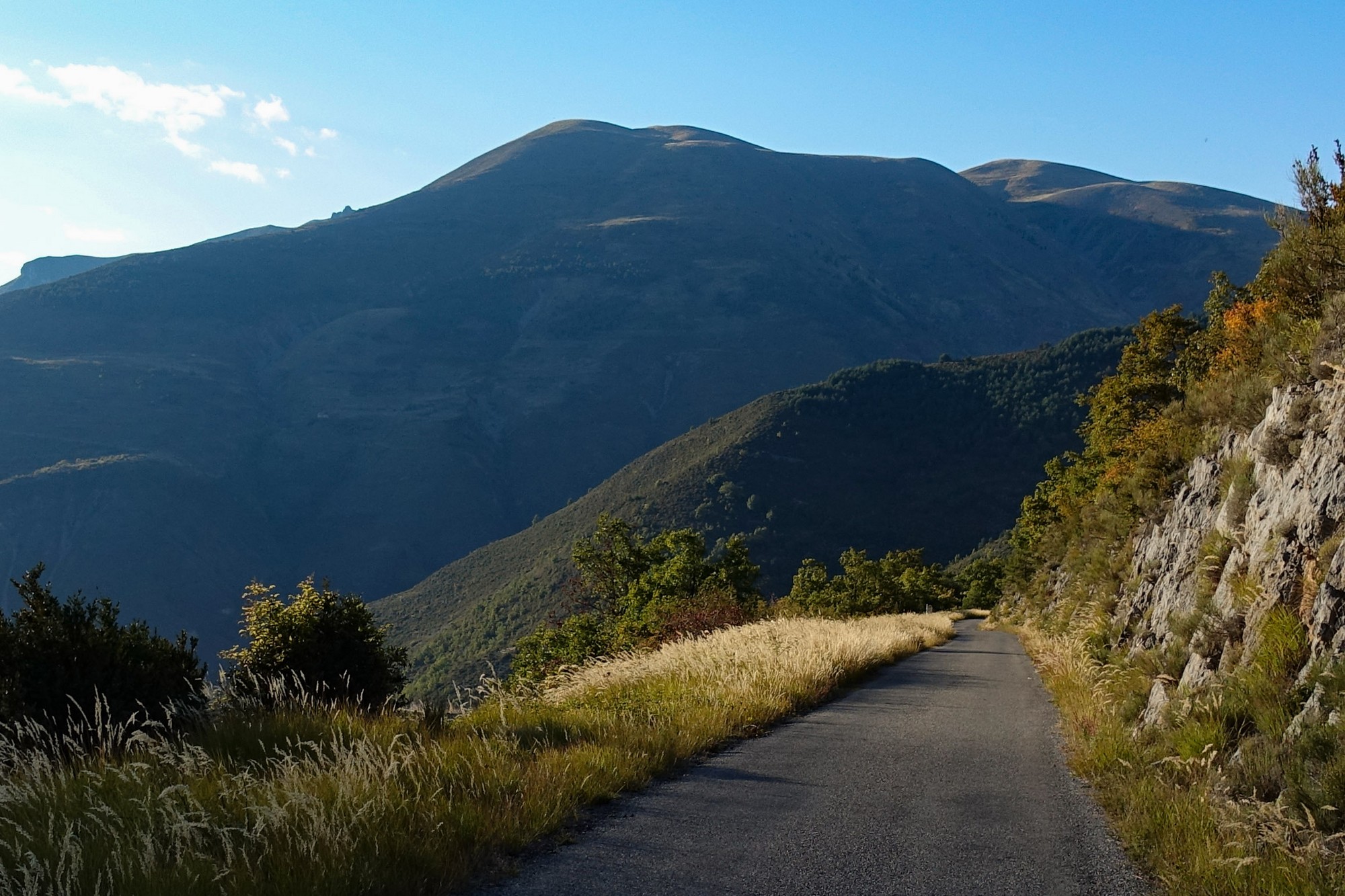 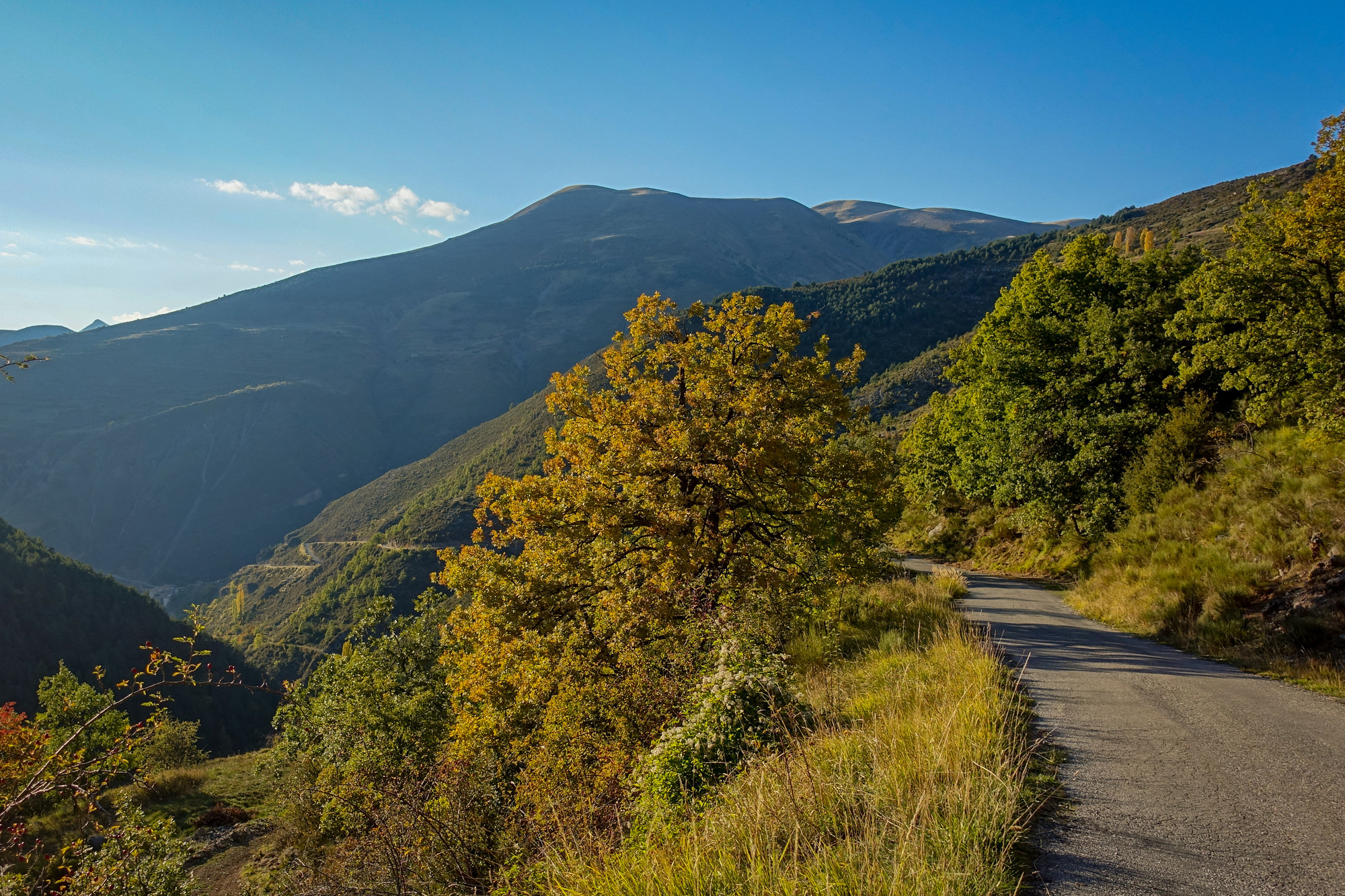 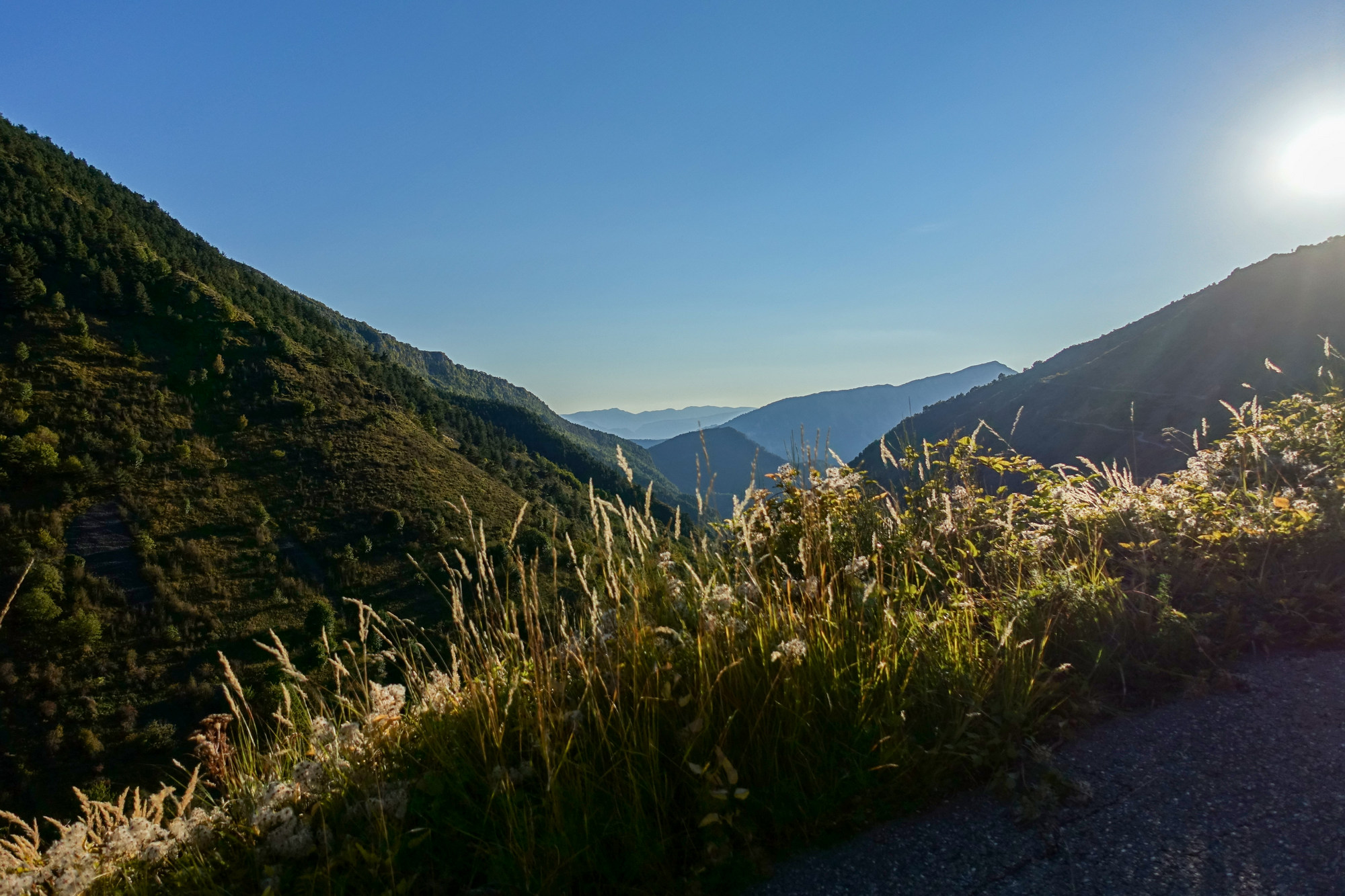 The first thing of note is that this side of the col is steeper. In fact it averages around 8%, but with sections up to 11%. And because nearly all of it is on the edge of a drop into the darkness, it seems more precarious. Many hillside roads have an open view opposite. This road is on one side of a deep narrow ravine, with astounding diagonal rock strata, adding, no doubt, to the vertiginous feeling I had. Also it was late in the day. In blazing sunlight it may have seemed less foreboding, but the lower part of the gorge was mainly in shadow.

At one point I stopped to get a photo. There was silence, as usual. Then a crack echoed off the rocks and a man’s voice in the distance “oh la la” (I think I remember that correctly!) Someone was playing boules and had just had a direct hit! Yes, deep in the middle of the back of beyond were French men playing boules! That was approaching Pierlas. 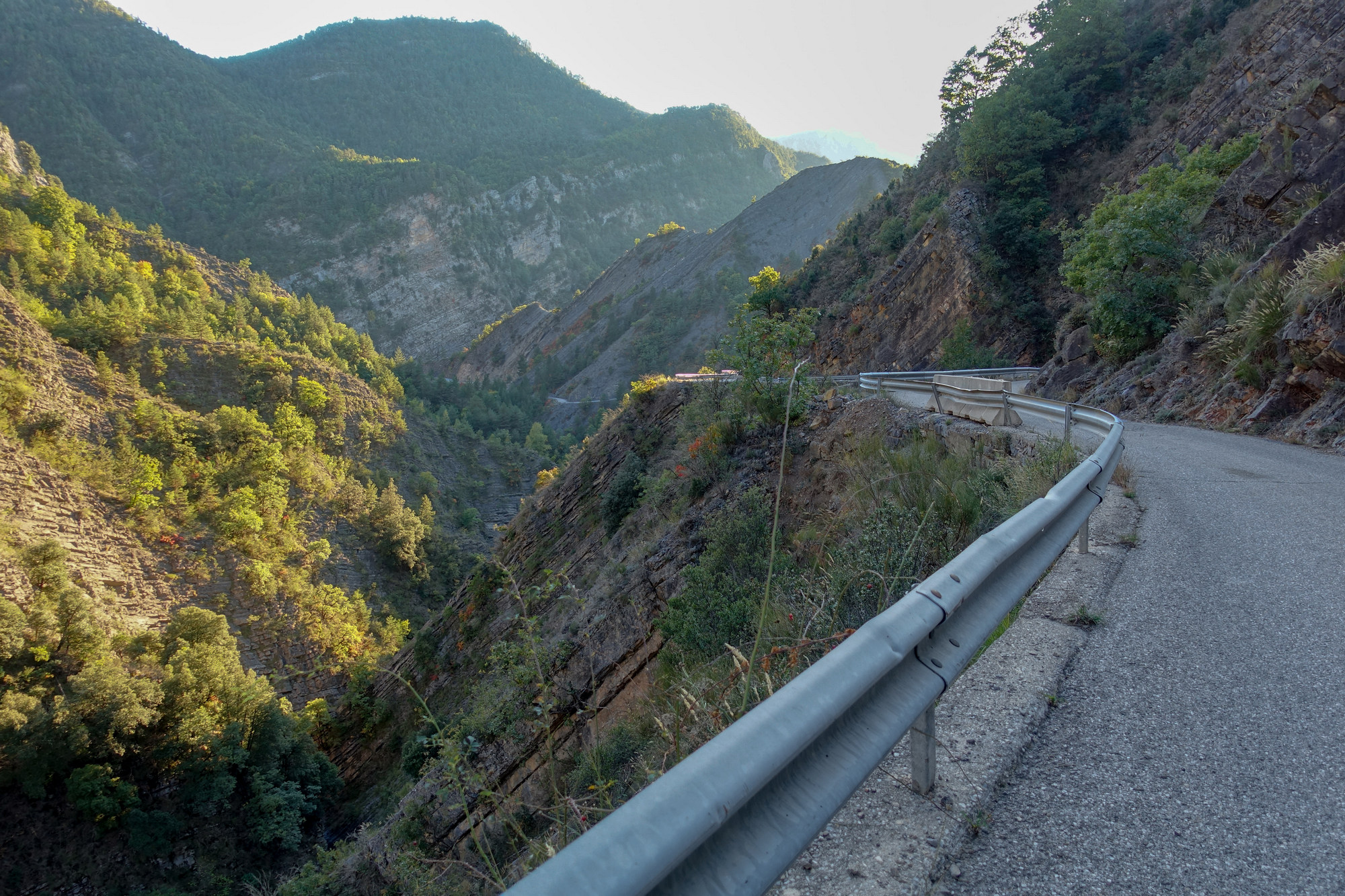 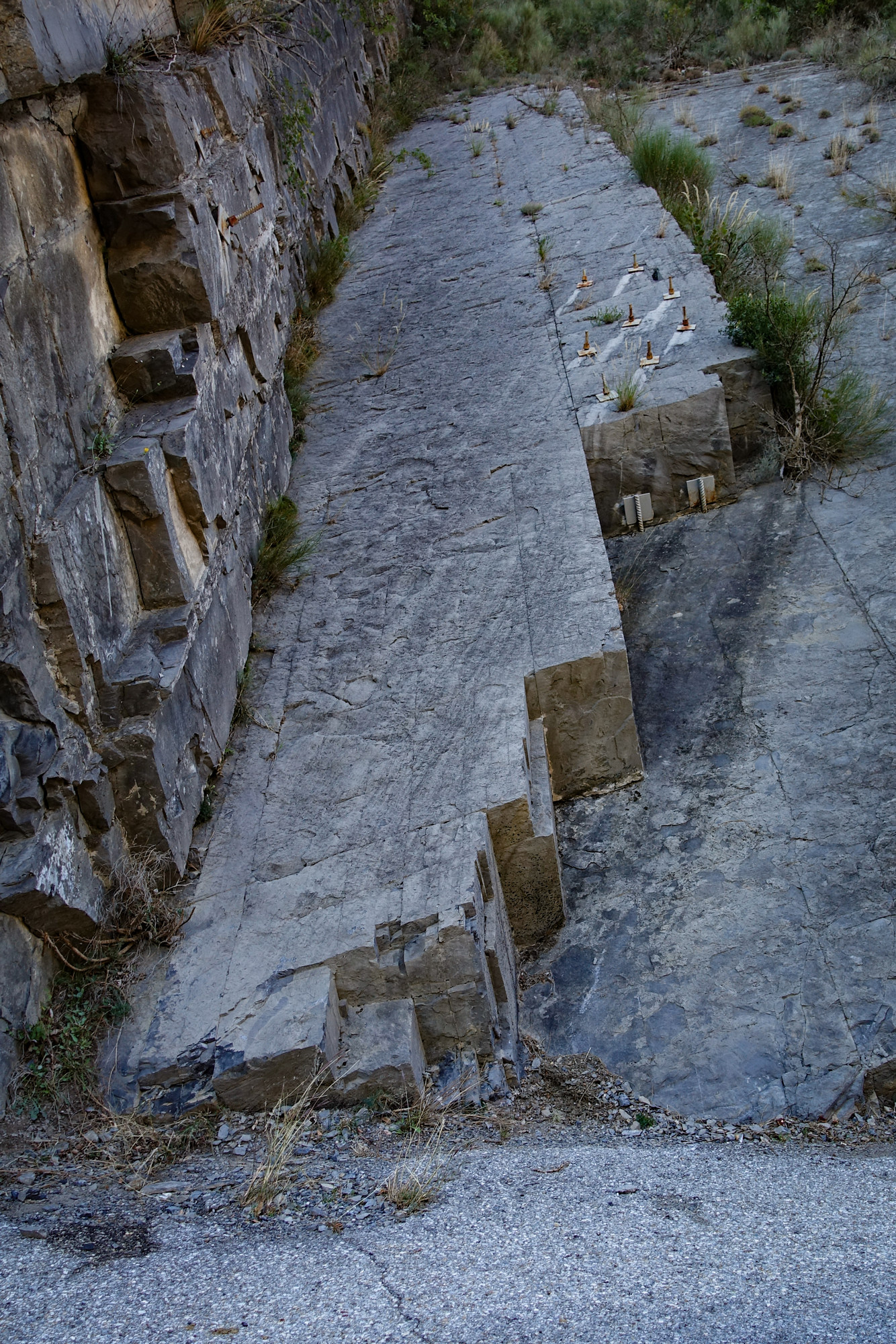 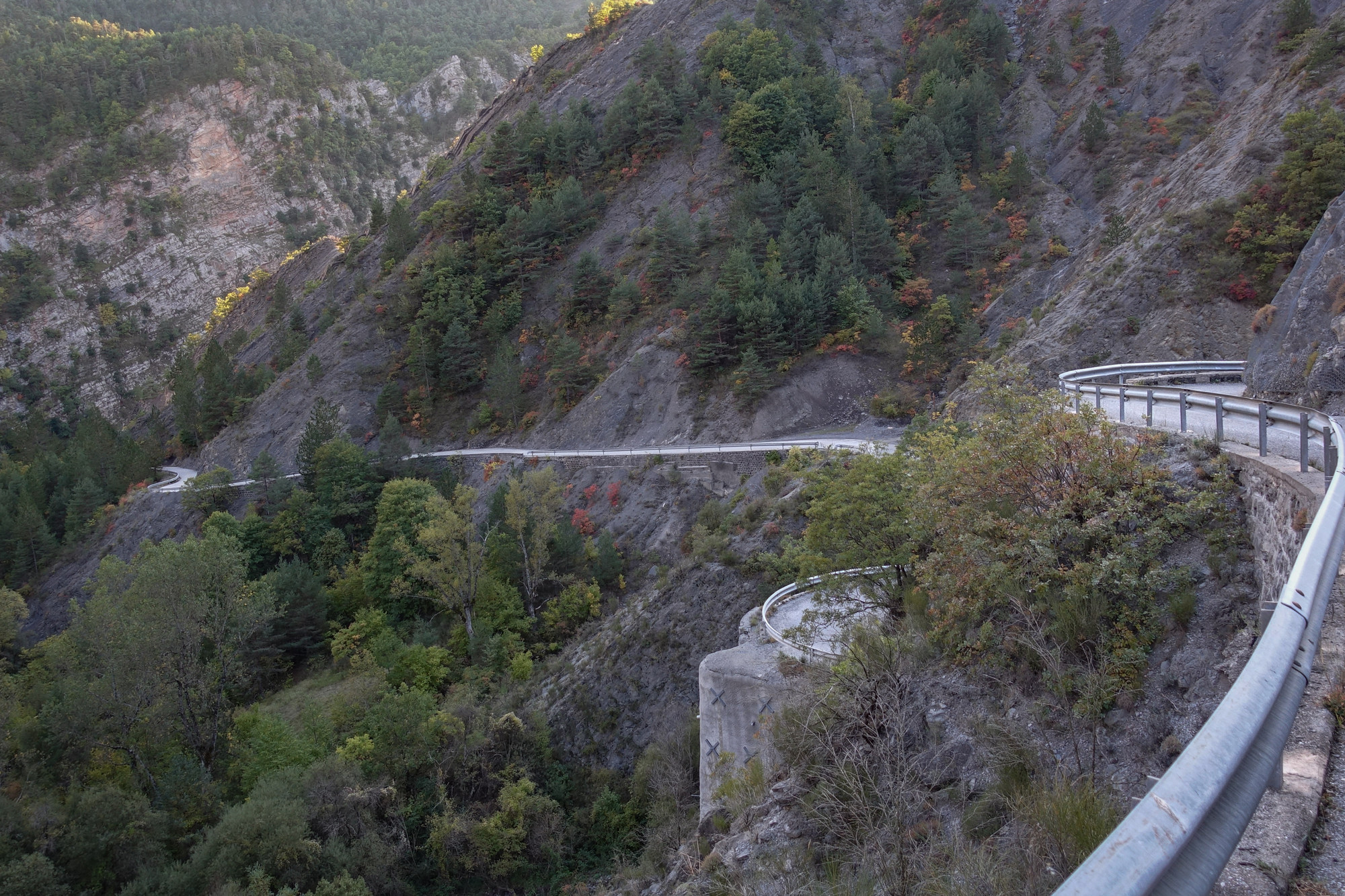 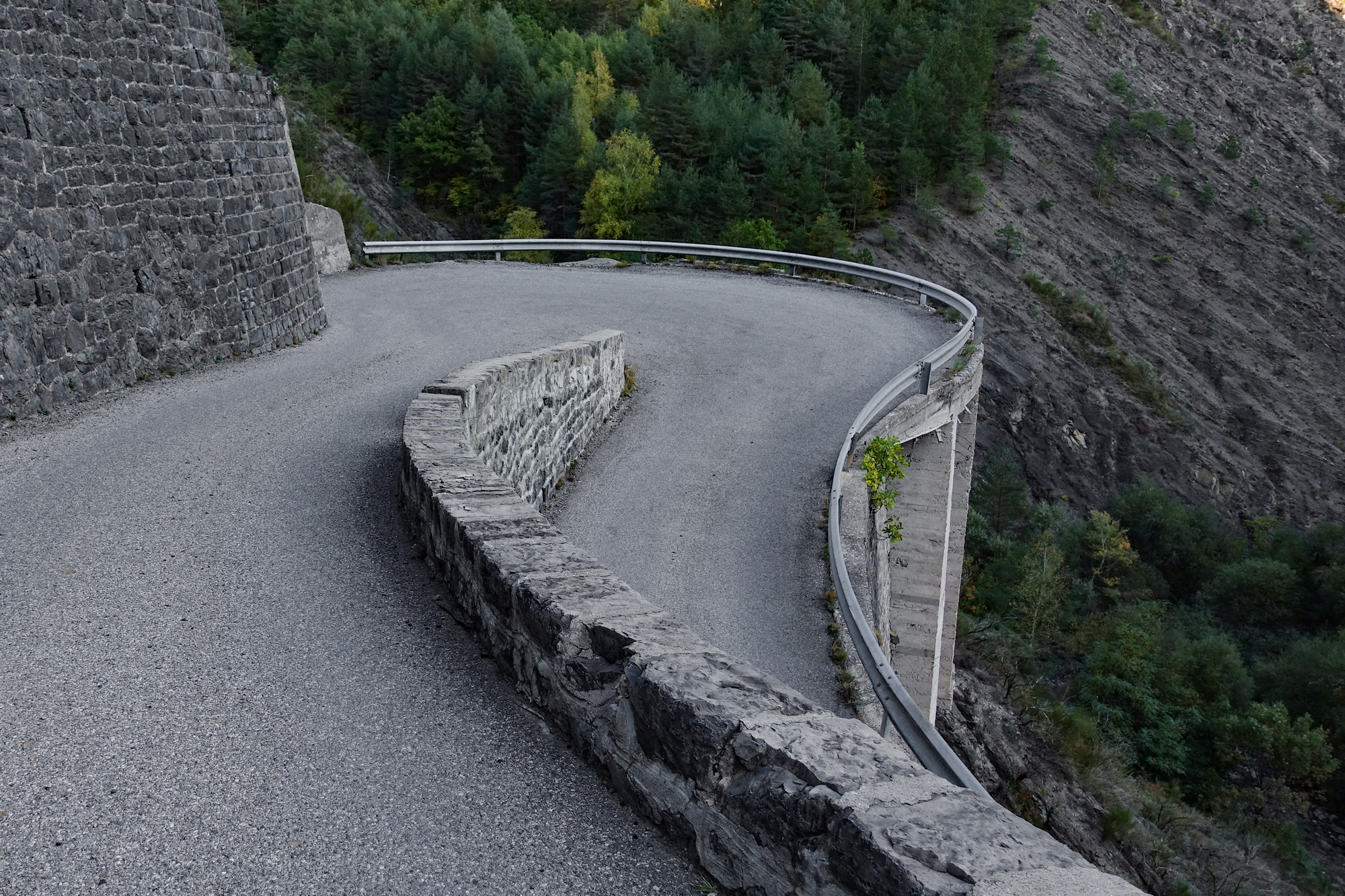 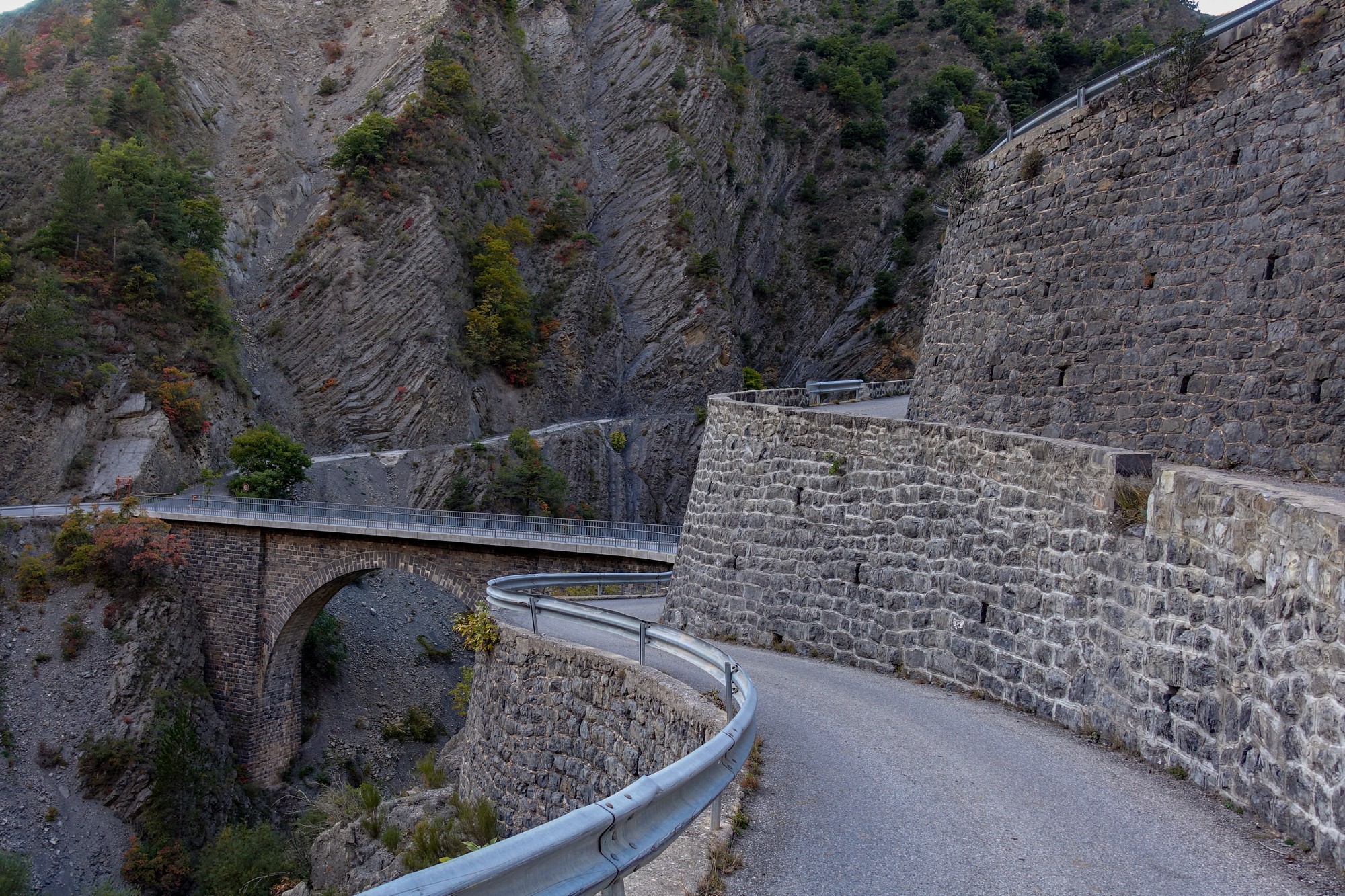 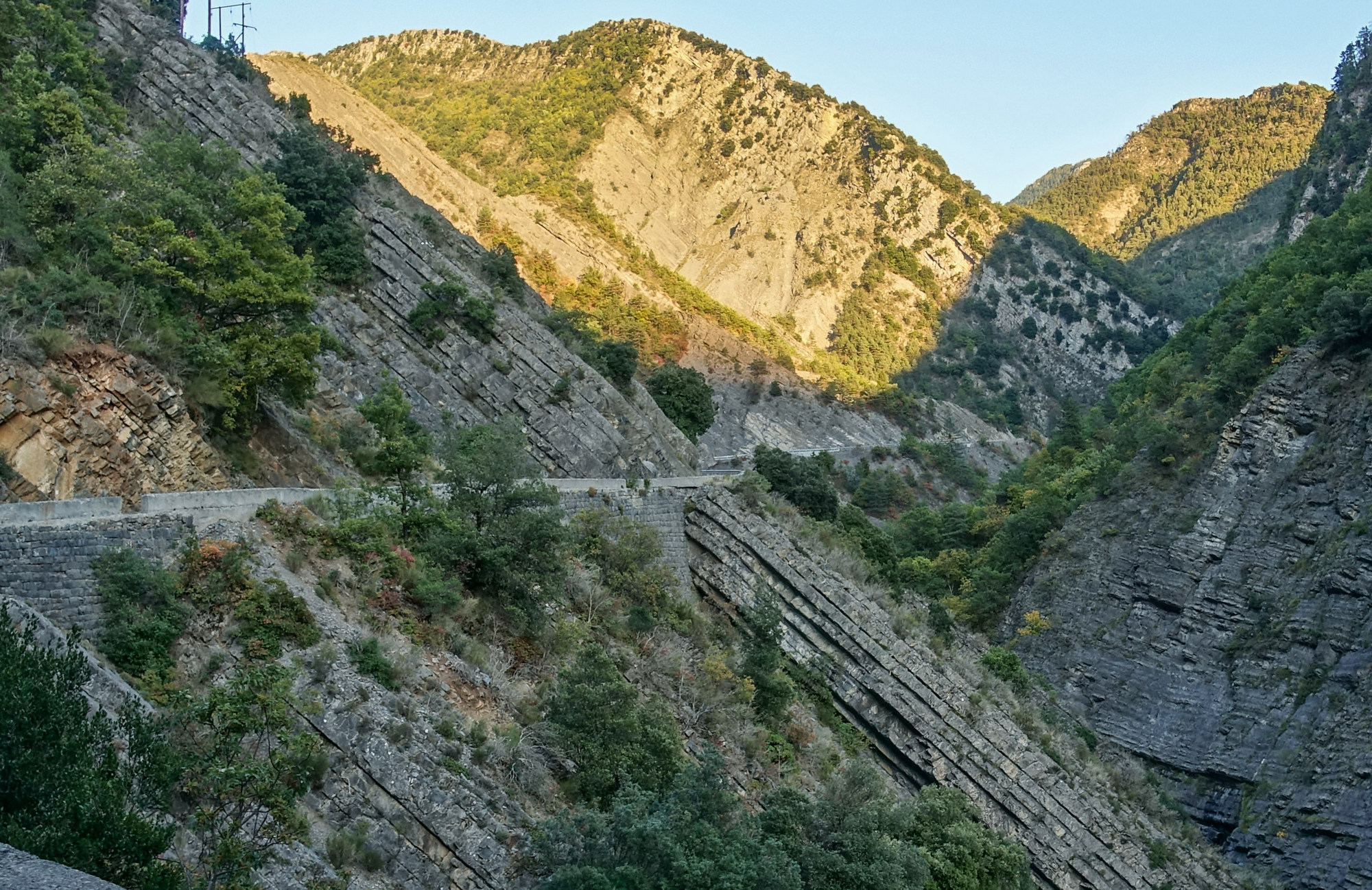 Eventually the road wound its way down to the D28 road through le Gorges du Cians. Sanity was resumed, with a fast, wide, safe road with sweeping bends and hardly any traffic.

Light was fading (but still OK to see through sunglasses) and I had my front and rear lights flashing. The five miles along that amazing road was at over 20mph. Suddenly, as can happen, I had found a new lease of energy.  And what’s more, the fact that I was no longer on the edge of a sheer drop helped with the rush. The road swerves its way between the massive, imposing rock faces that rise up vertically 1000ft from the gorge floor. I was reminded of what I had said about the Verdon Gorge, and that was that you can’t cycle in it, only around it.  The best gorge experience requires you to be right down at river level.

At the end of the gorge road, where Le Cians flows into Le Var, I turned right onto the D6202, the main road that follows le Var, and rode the remaining five miles back to Puget Théniers. I had fairly good pace on this gradually-uphill stretch, but began flagging slightly at the end. I got back at 18:45.

That was yet another astounding piece of France – Is there no end to its treasures..