Many signposts in the area declare the Col de la Bonette as the highest paved road in Europe. 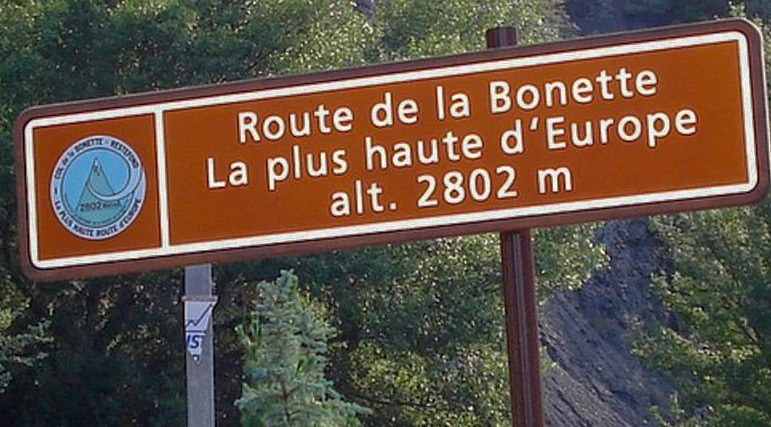 But it’s not quite as simple as that. Note that the sign above calls it “Route” de la Bonette, but on the small round bit on the left of the sign it says “Col” de la Bonette 2802m, which is not strictly true. The ‘Col’ , as used by traffic travelling between Jausiers and Saint-Étienne-de-Tinée is at 2,715 metres, but there is an additional, and optional, 2km loop that takes the paved road higher and around the peak. This is called Cime de la Bonette. This is at 2802 metres (although see below).

This wikipedia article explains it all

A couple of days before the ride someone had told me that the Col de la Bonette was closed at this time of year. That was disappointing to hear, but when I searched online using inforoutes06.fr, it said that “the Col de la Bonette will be closed at night between 8 p.m. and 10 a.m., for an indefinite period.” So it was open during the day – good.

But it also said “For information, the summit loop of the Col de la Bonette remains closed to traffic for an indefinite period“. That meant I wouldn’t be able to go to the highest part around the loop. Damn!

I started my ride from Saint-Étienne-de-Tinée at just before midday. I wore longs, a merino wool base layer, a roubaix long-sleeved top and thermal socks. I also carried with me, in a lightweight backpack, a skullcap, snood, 2 rain jackets and toe protectors (Castelli Toe Thingies). 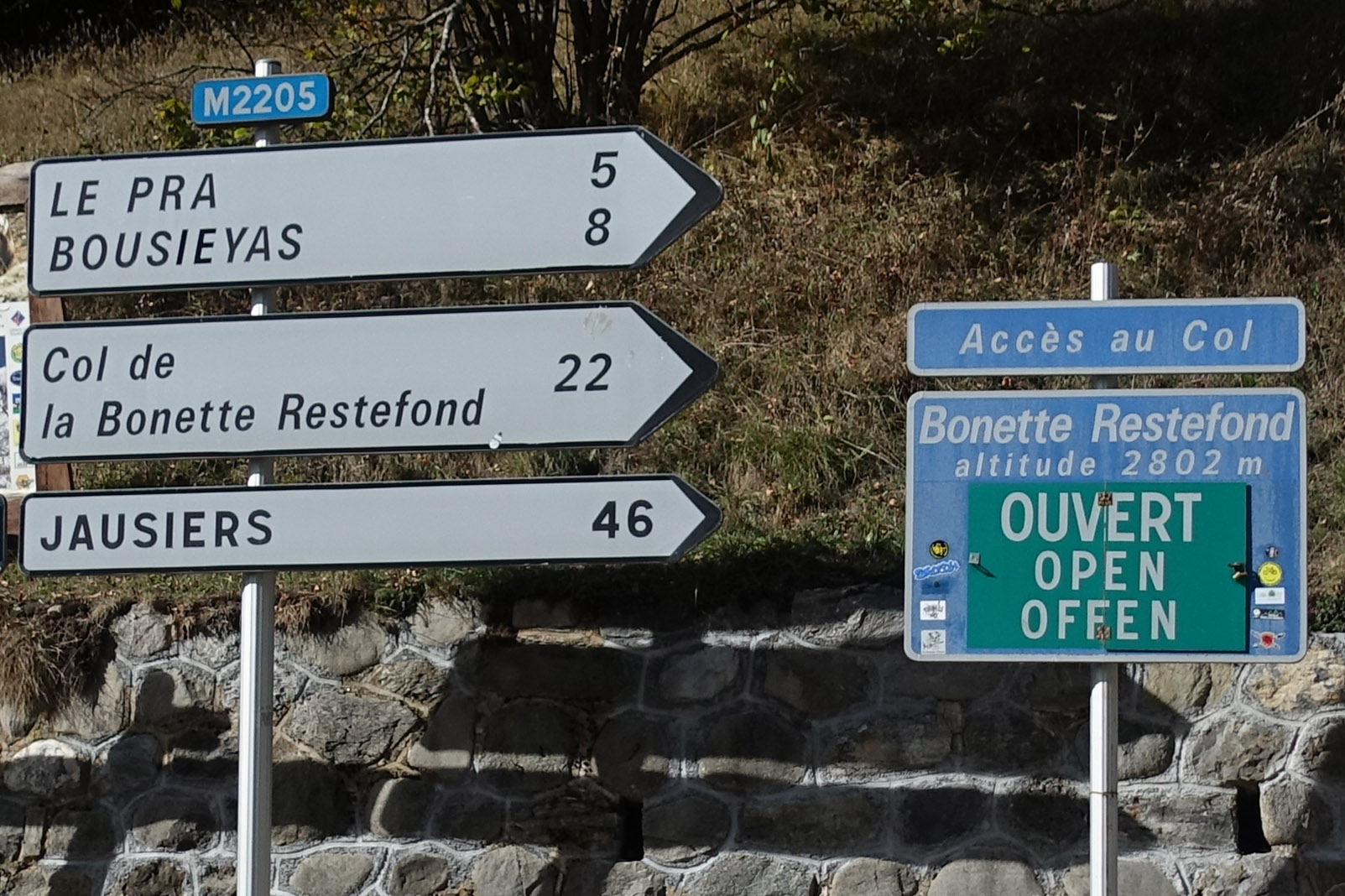 The col was open. I’m taking this ride very steady, so even on the sections where I feel I can go faster I’m still keeping to a steady pace. The first several miles were in second and third gear at around 6 miles an hour but then after a bridge it kicked up a bit. Every kilometer there is a sign that tells you the elevation, the gradient and how much further to go. 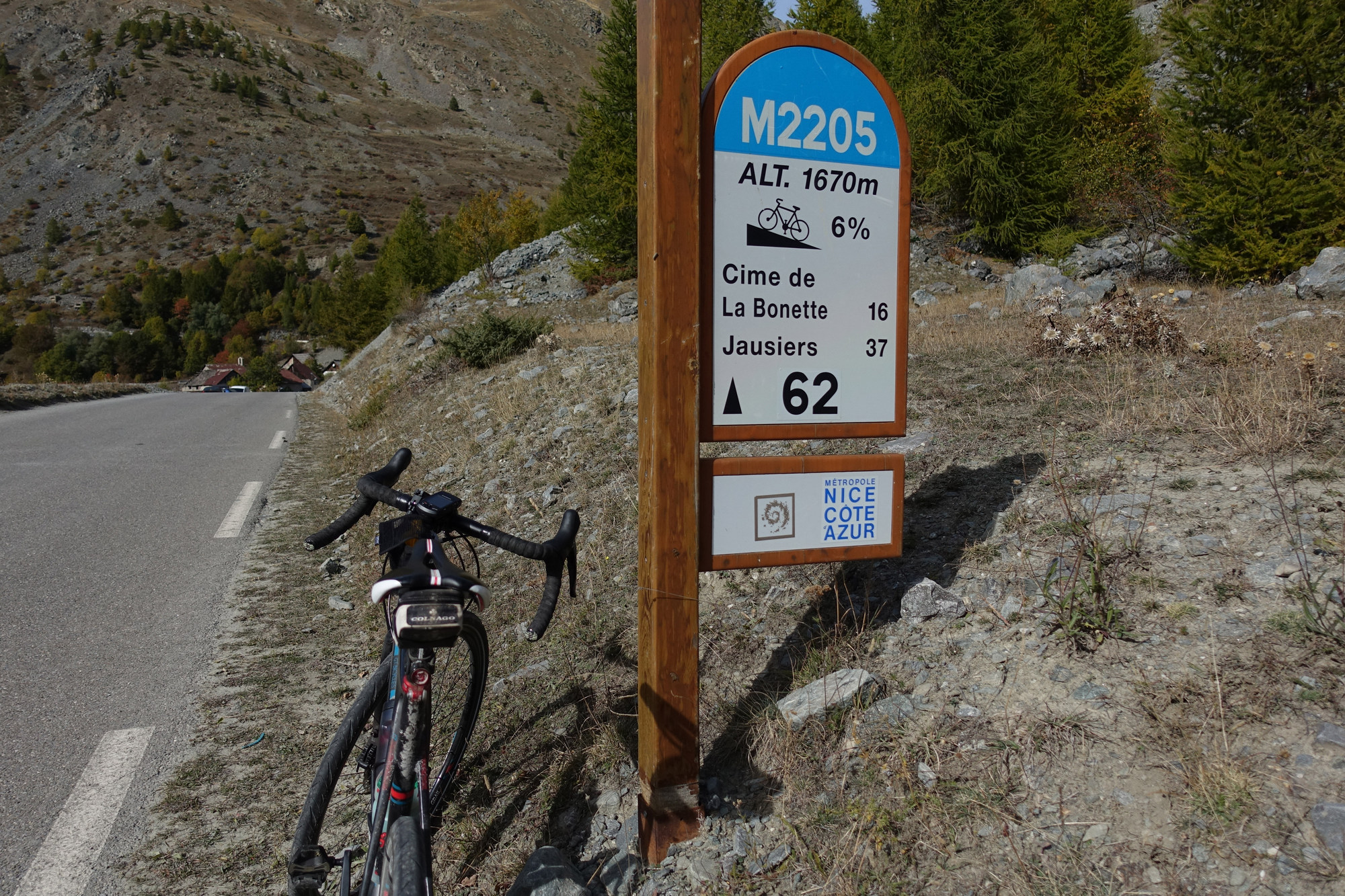 I don’t want to say too much but so far it’s been ok – that’s more than a third of it already done. I haven’t taken many photos because the road has been coming up a wooded valley – the sort of thing you’ve seen before. One of the main things, as soon as I started the ride, is that I am sweating, even though the air is quite cold – single figures ºC I would imagine, so at this stop I think I’ll take my gloves off and carry on without gloves, and I’ve already zipped down my jersey. I’m just going to have something to eat and then press on.

This report coming at just over 10 miles I seem to be above the treeline now. All around me is rock, grass, and a sort of lime green moss. The effect of the effort is beginning to kick-in. I’m just approaching where I think there is going to be a reveal of the last section. I’ve got a bit of a headache coming. I don’t know if it’s the sun or the altitude,  so I’ll have a painkiller to see if it works. On the first part of the ride there was always the sound of water –  the river Tinée in the valley and lots of waterfalls gushing out of the rocks at the side of the road. Now it’s quieter. The sun is getting a bit hazy but is still out. There is a very light wind and the air doesn’t actually feel that cold. 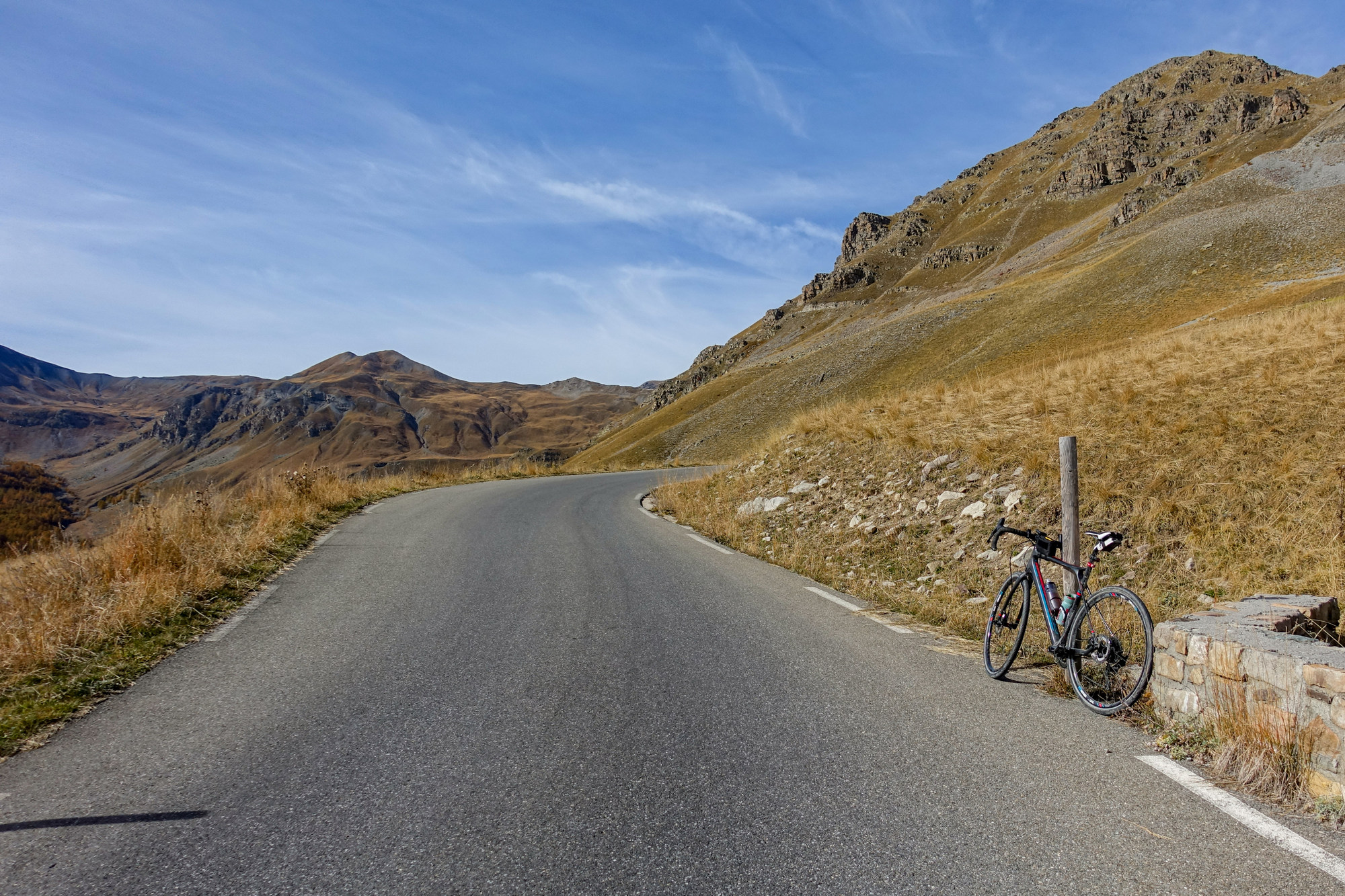 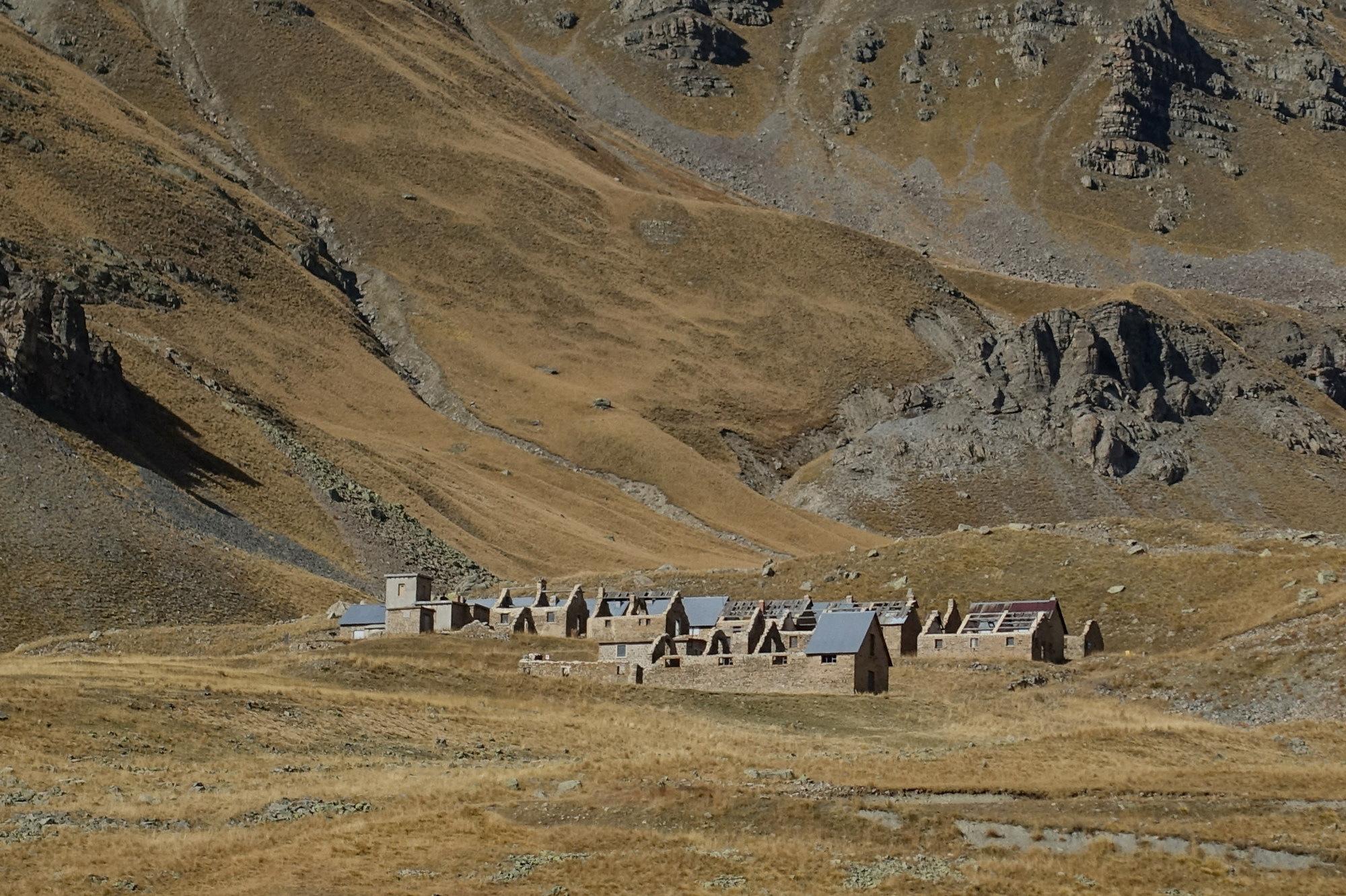 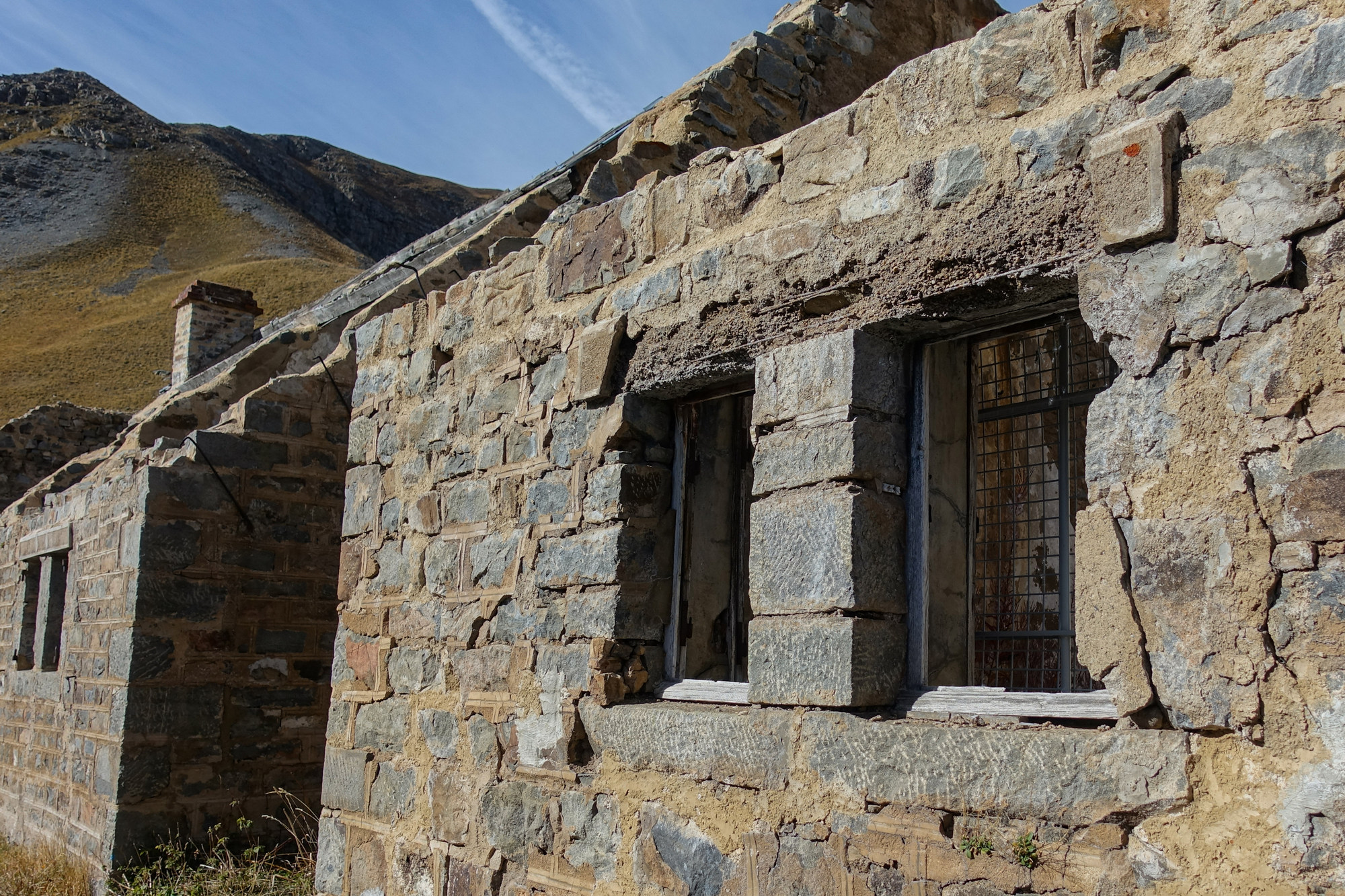 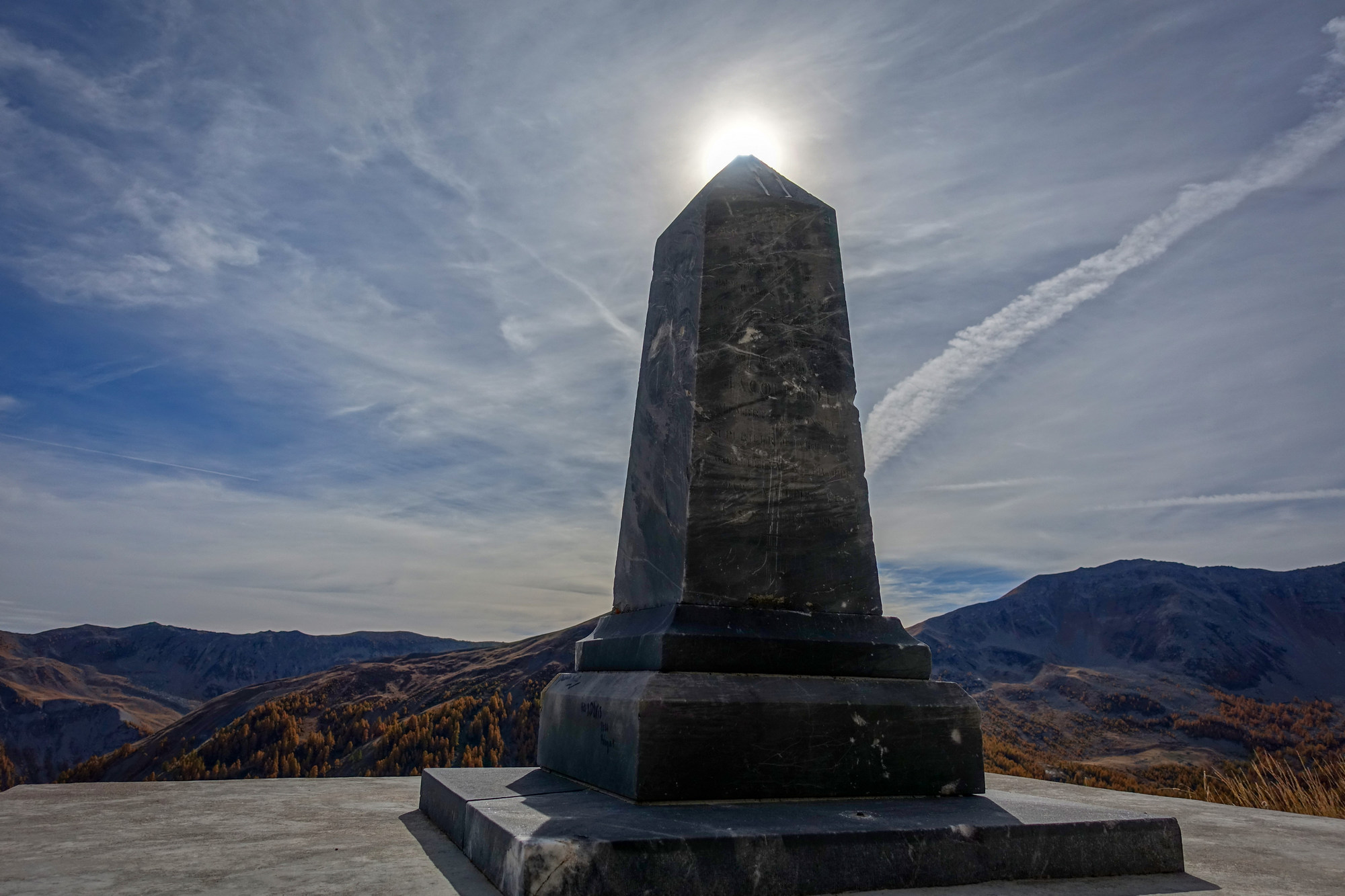 The first thing I noticed when I reached the col was that there was nothing to say that the loop to la cime was closed. The second thing I noticed (after looking around) was that there was no col sign! By the way, those signposts earlier in the ride (at every km telling you how far left to go) petered out somewhere. The last 10, at least, were not there. The road surface had been superb nearly the whole way up. Traffic was almost non-existent. less than 10 cars per hour. No cyclists other than a group of three who descended past me when I was getting some photos.

Just before reaching the col, the (cold) wind picked up slightly, but calmed down again once I reached it. Almost as soon as I got off my bike a French man, one of three, approached me and asked me where I’d started the ride (Saint-Étienne-de-Tinée) and then didn’t stop talking. Sometimes one of the others would join in. The third was silent. Their van was parked there and I tried to work out what was written on it. They appeared to be geologists or something along those lines. They certainly knew a lot about mountains, rock, rivers, glaciers, etc. The conversation was solely in French. One of the first things I asked was whether the loop was open. He said that it was closed due to rockfalls. (But there were no signs to indicate that. It seemed like you could only know that it was closed by going searching on the internet.)

As we stood there, a motorcyclist and one car went up there, with much tutting and shaking of heads among the three. I mentioned that I hadn’t seen any marmottes – he said they’re all underground (sous la terre) hibernating because it has got too cold for them. He pointed out lots of things we could see and what places lie in which direction. I can’t remember all of it – he pointed out three peaks way over in the alps and said what the right hand one was (can’t remember) and that the white streak on it was a glacier. When I mentioned about the lack of col sign he said something about the snow and pointed to a broken stump of a signpost. We had a long conversation, with the second one joining in, where we listed rivers in the area. Luckily I was quite knowledgable and contributed some they hadn’t thought of.

This is the view we had while chatting. Every so often we’d acknowledge it.

View from Col de la Bonette – the track you can see is a gravel track leading to le Fortification du Col de la Moutière, another part of the Maginot line. More info here

I must admit that I had been relieved when they’d said the loop was closed, mainly because it looked really steep, and in shadow on the steeper side. But we’d been standing there for so long chatting that I’d recovered from the effort of the climb. I asked again about it being closed and he basically said you go up it at your own risk. I decided to go up. I went up the right hand side as it was less steep, although longer. When I say less steep, I mean not the 15% of the other side. It was still really steep and I slogged my way slowly up there. I could see loose rocks and stones over the road. I felt quite vertiginous climbing up there and kept well away from the edge. Lucky there was zero traffic. Eventually I reached La Cime de la Bonette. 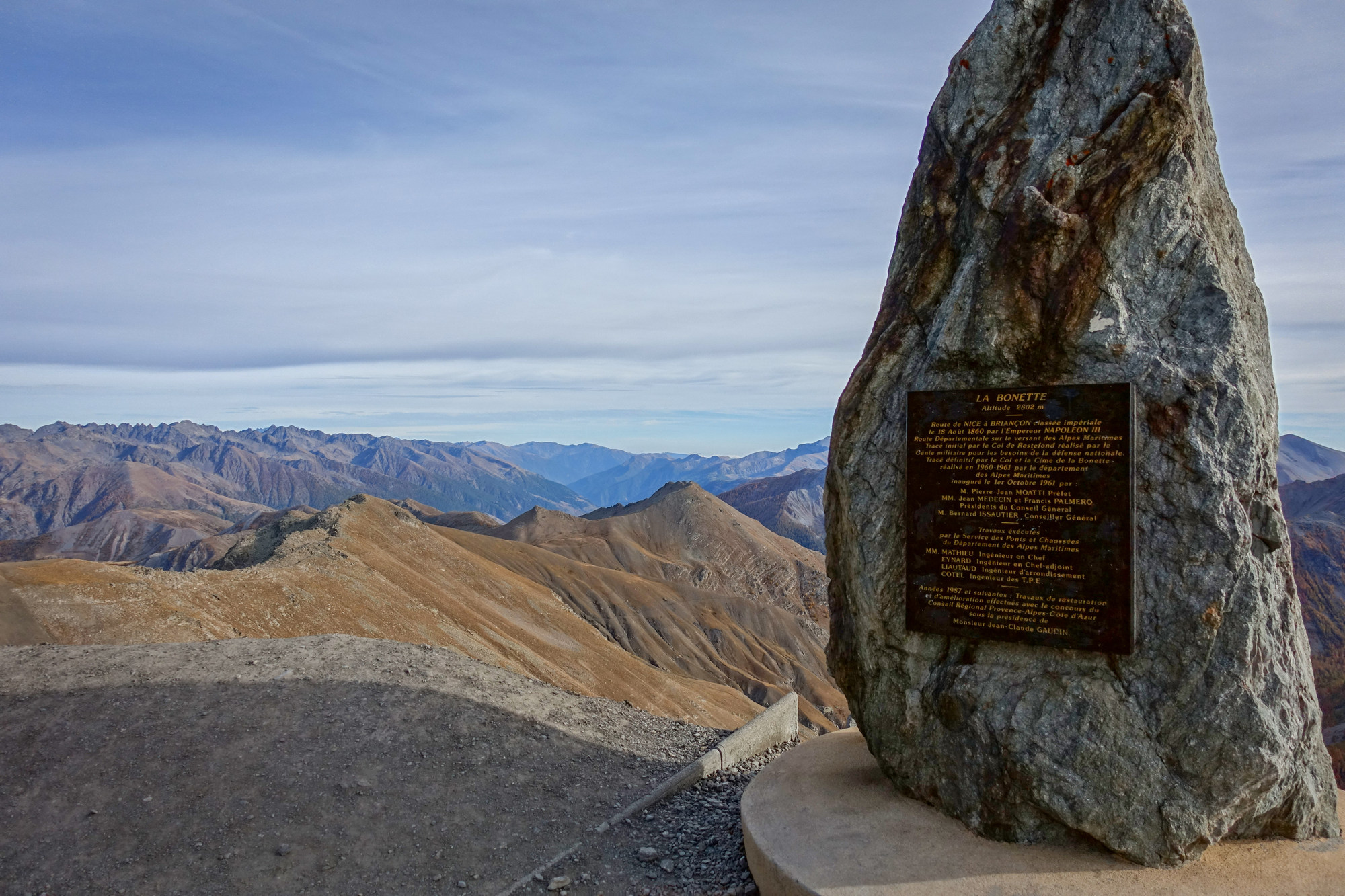 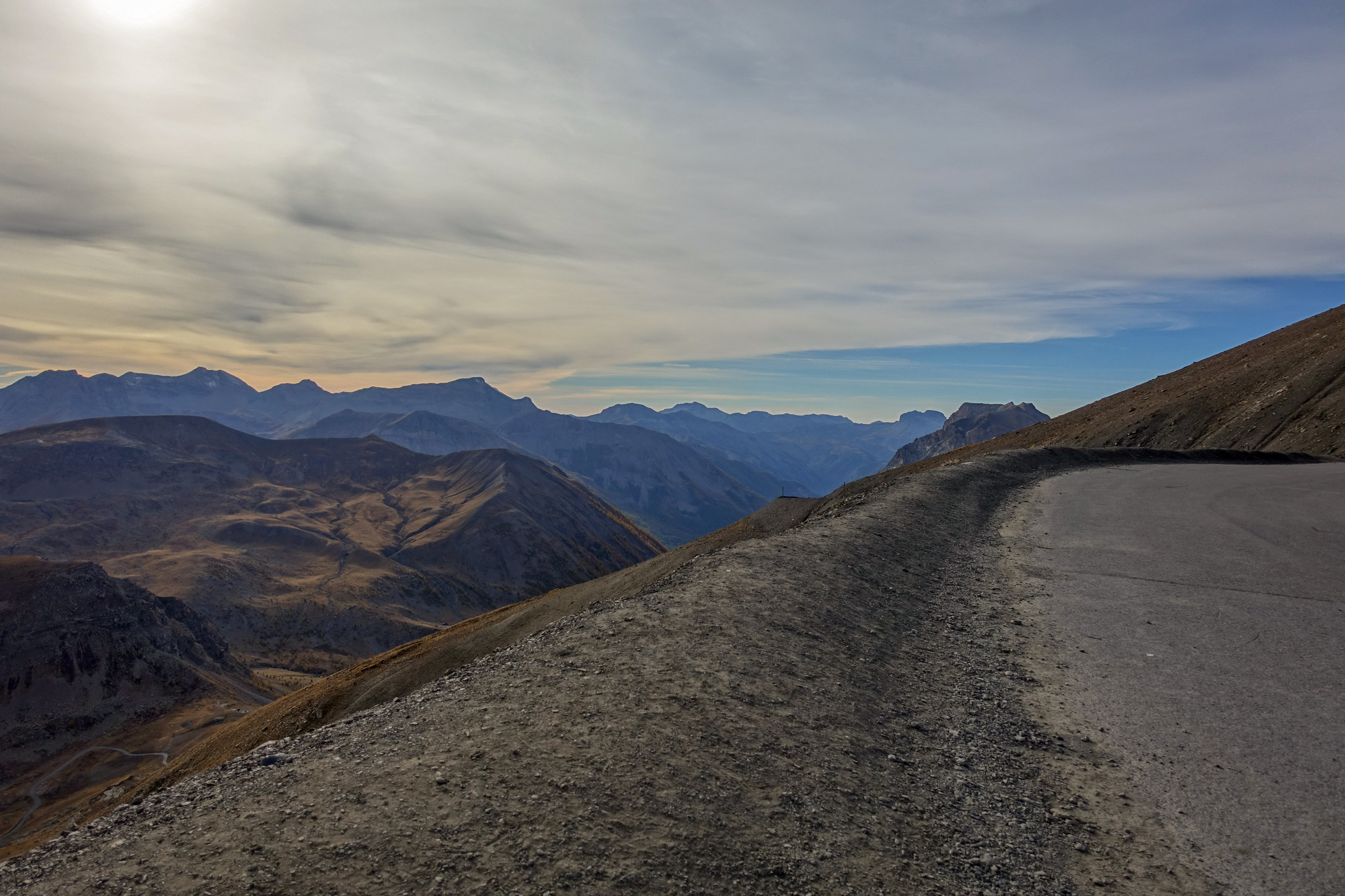 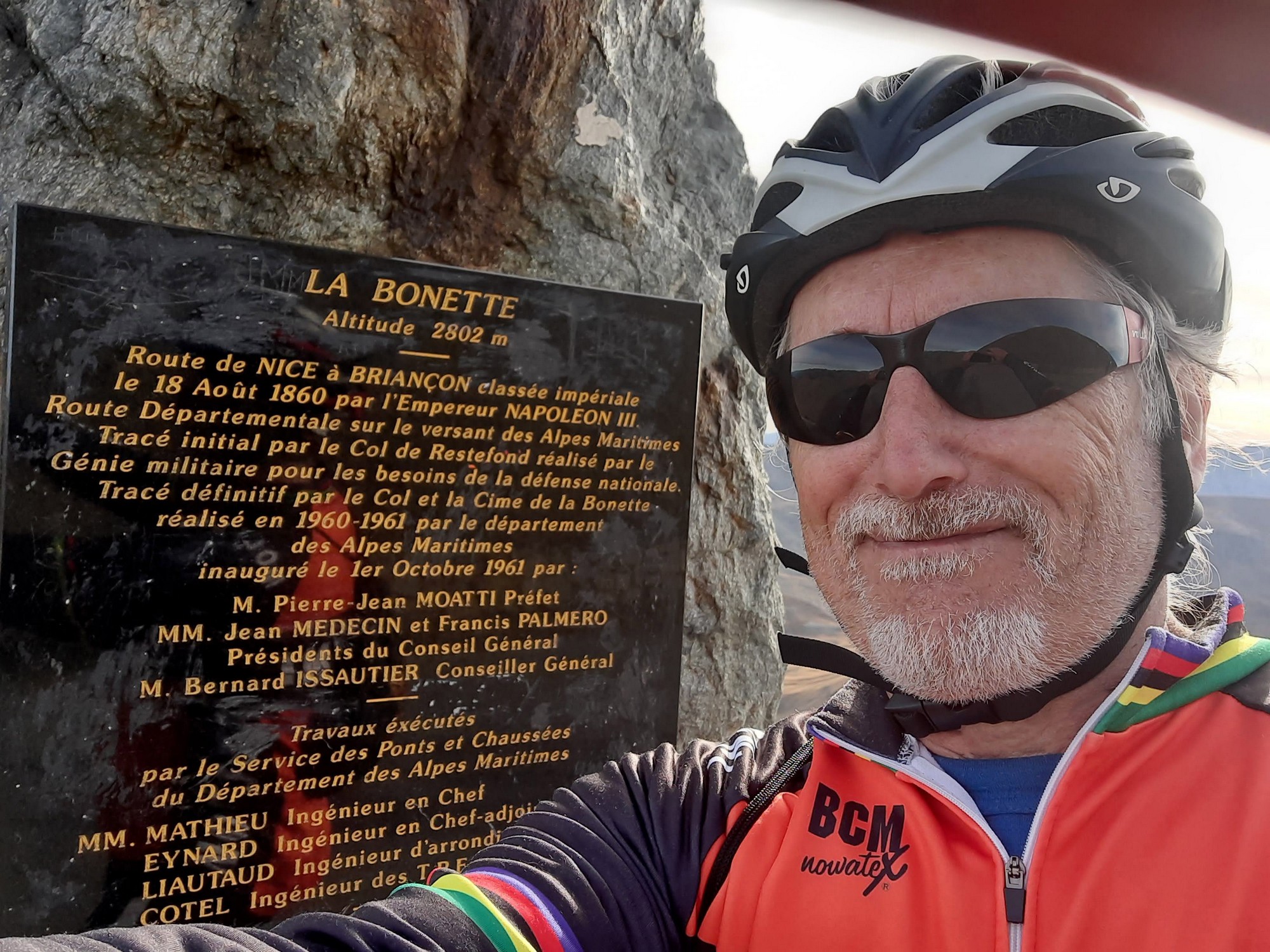 Set into the base of that stone obelisk was an altitude marker, the likes of which I have see before. It stated that the altitude was 2804m, two metres higher than the signs say. That’s good enough for me! 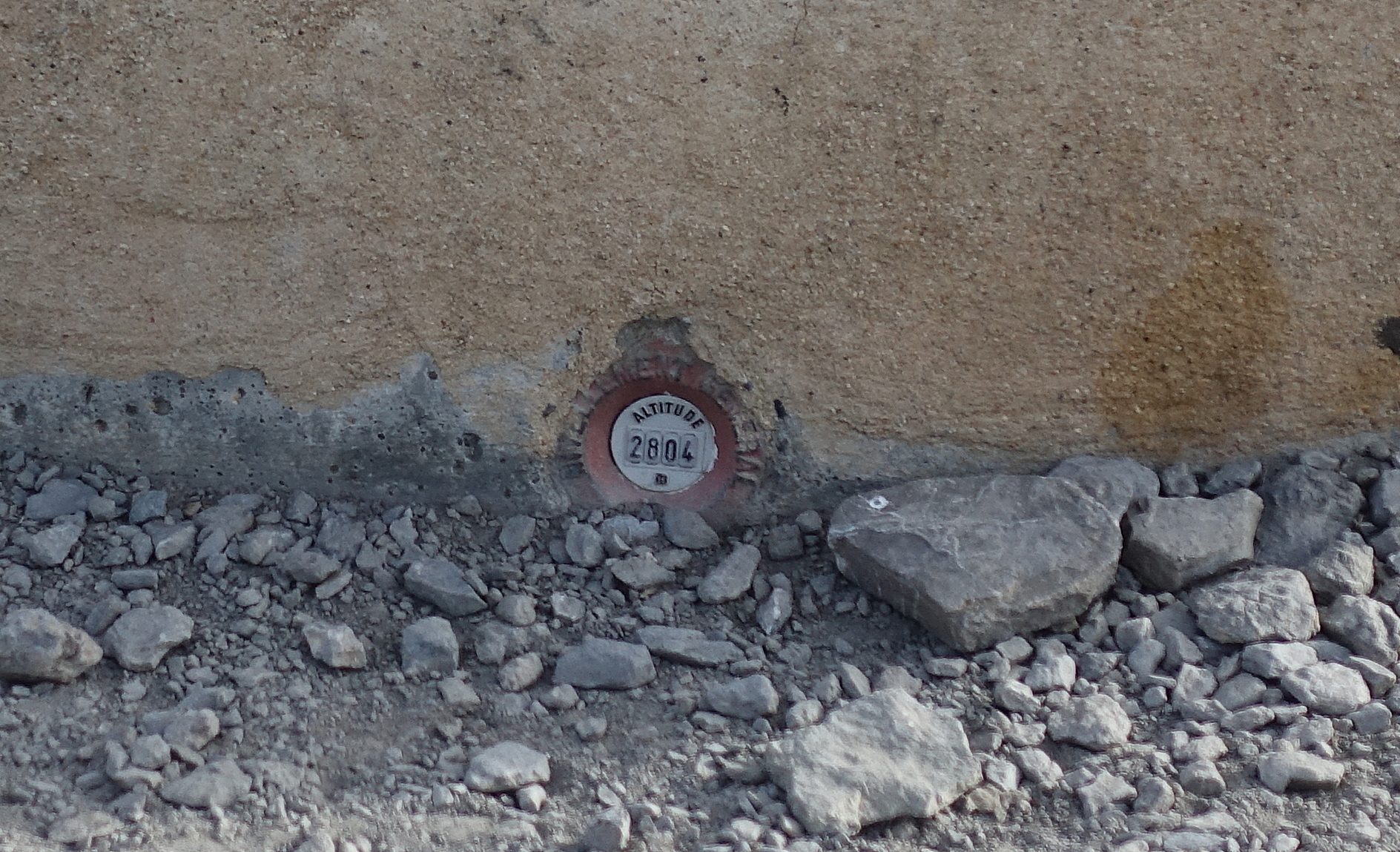 The only others up there were two other cyclists who’d left their bikes by the sign and were walking up to see la table d’orientation, at the very peak. 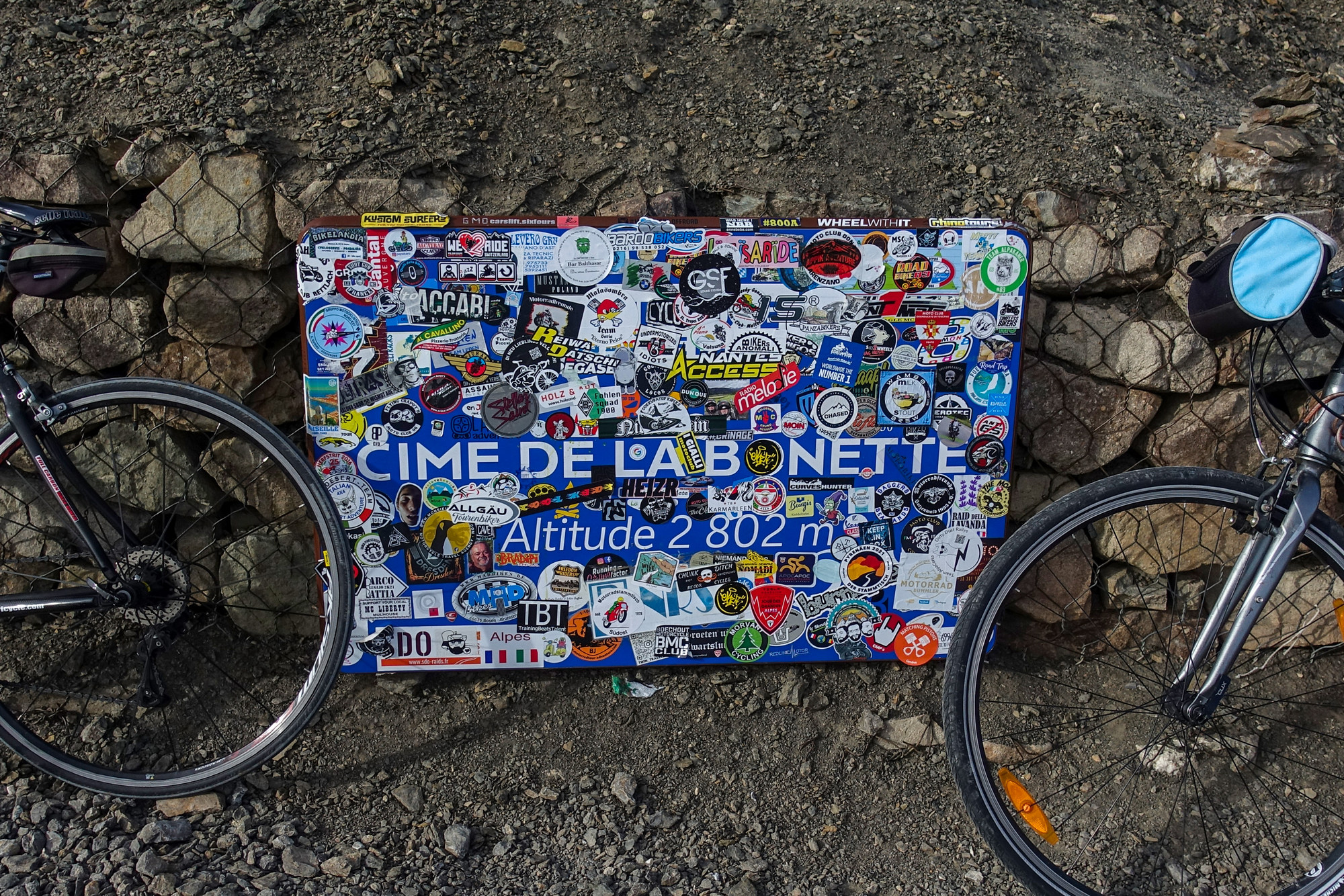 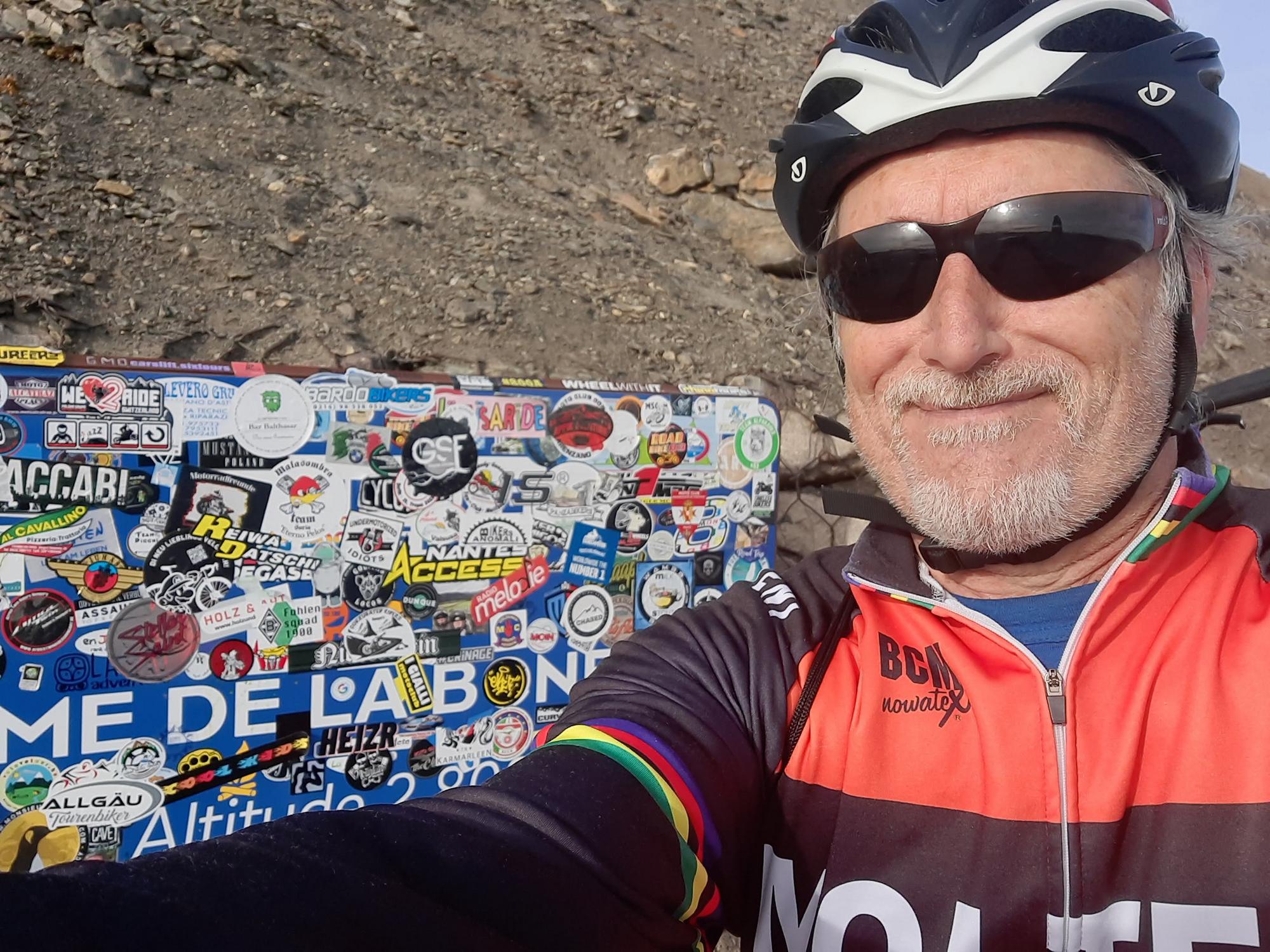 Just after the last col photo, an Italian motorcyclist pulled up and asked if I could take his photo. For some reason he had to wear a special shirt for the photo, ‘for his friend’.  I got a couple of photos for him on his phone. We briefly chatted. He said the scenery looks like Mars. I asked if he had been up Mont Ventoux but he didn’t seem to have heard of it (too far into France, maybe) – I told him that it looks like the moon.  Just as I turned to walk towards my bike, I heard a familiar series of beeps behind me. I looked around and he had placed his drone on the tarmac – a DJI Mavic Mini – the predecessor to the one I have. I bet he got some great footage up there – conditions were ideal – not a breath of wind. We had a quick chat about drones – in fact I mentioned that there was a sign saying no drones, at which he became concerned. I urged him to go for it – there was nobody around anyway.

In fact you could argue that the drone sign only applied to the walk up to the Table d’Orientation because it also said no cycling.

I left him to it and proceeded to get dressed for the descent. I put on my shoe covers, snood, skullcap, my expensive rain jacket, then my normal rain jacket on top of that. I also put my gloves back on (I’d taken them off to keep cool). And so I started the descent.

Again, I felt very wary of the fact that there was no real edge to the road, just some banked-up stones. I would have prefered a six-foot high concrete wall! It wasn’t like it was a sheer drop, but it still felt as if you would tumble forever if you fell over the edge.

Needless to say the views were spectacular and I kept stopping to get photos. 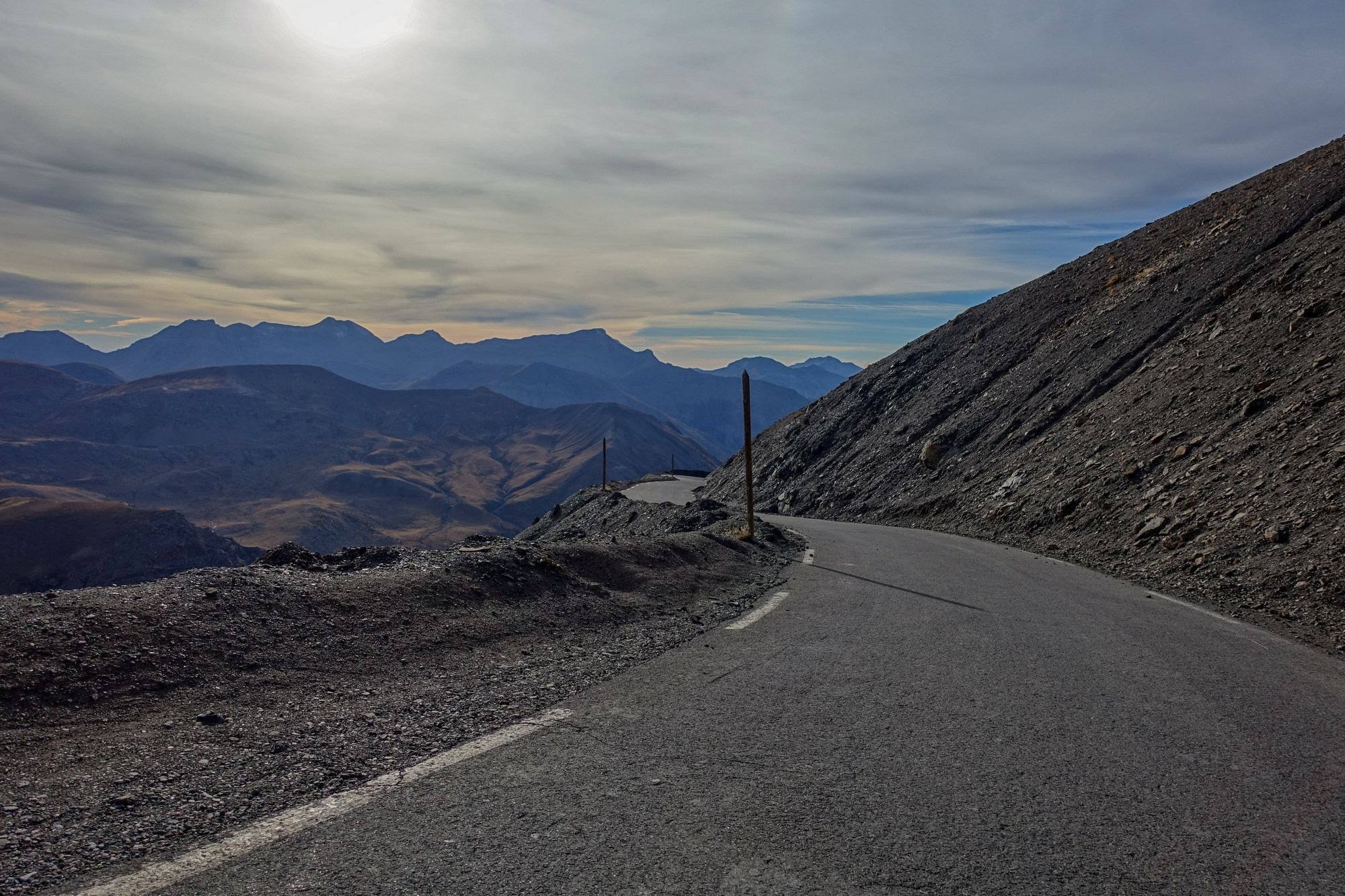 Even with all my layers of clothing, the descent was bloody freezing. Stopping for photos helped. Now the sun was quite low it was casting a different light on views seen on the ascent 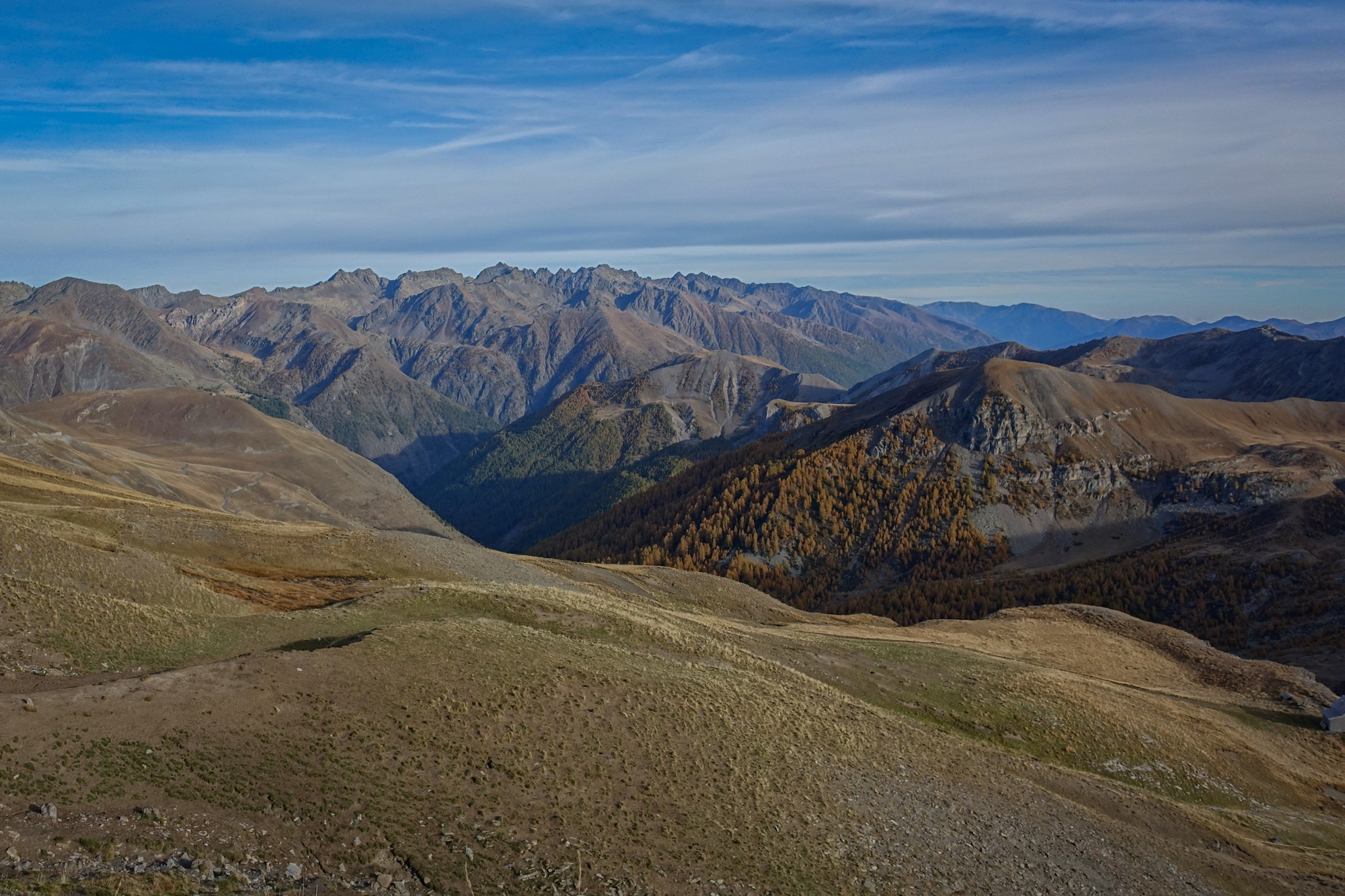 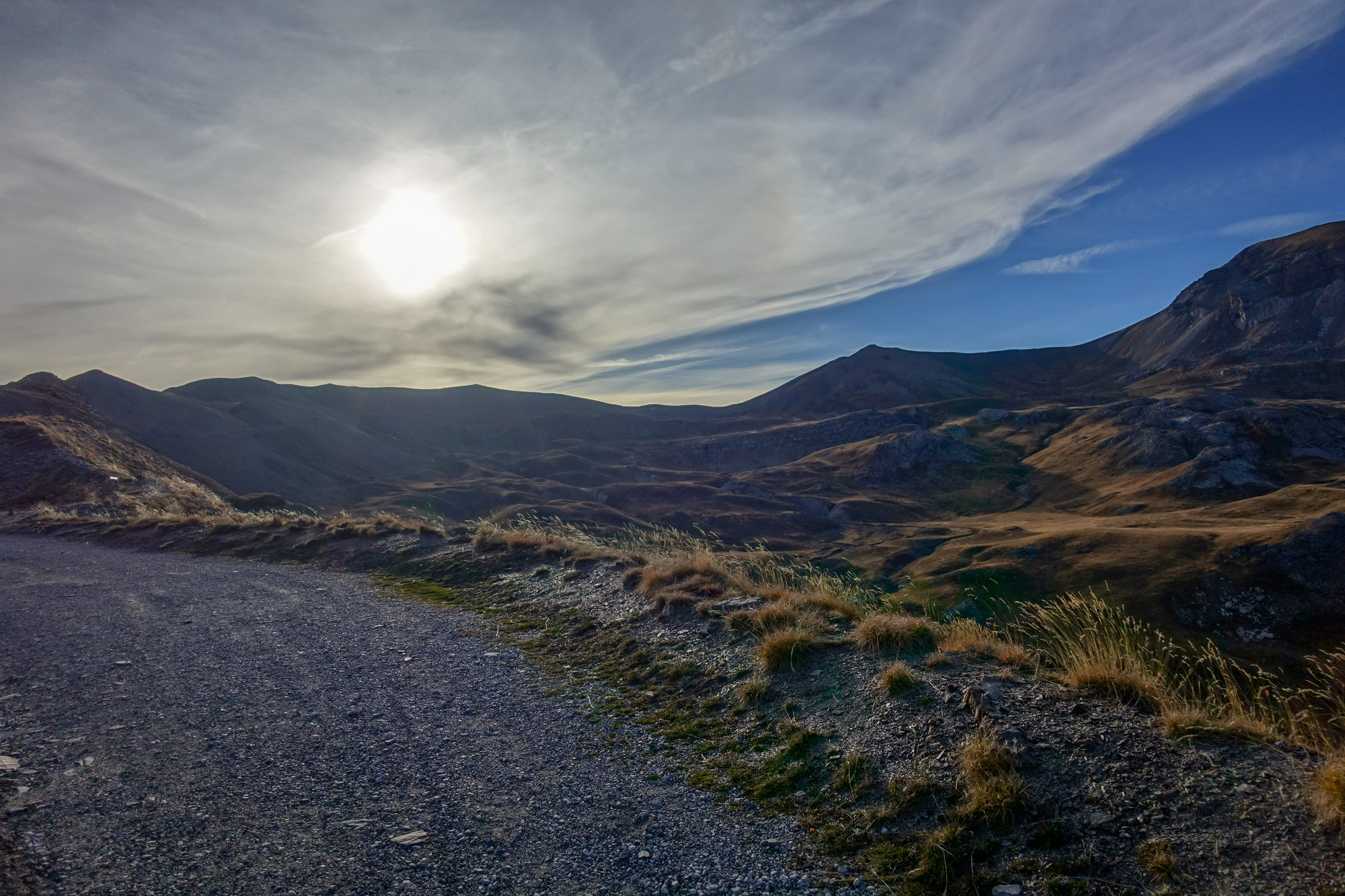 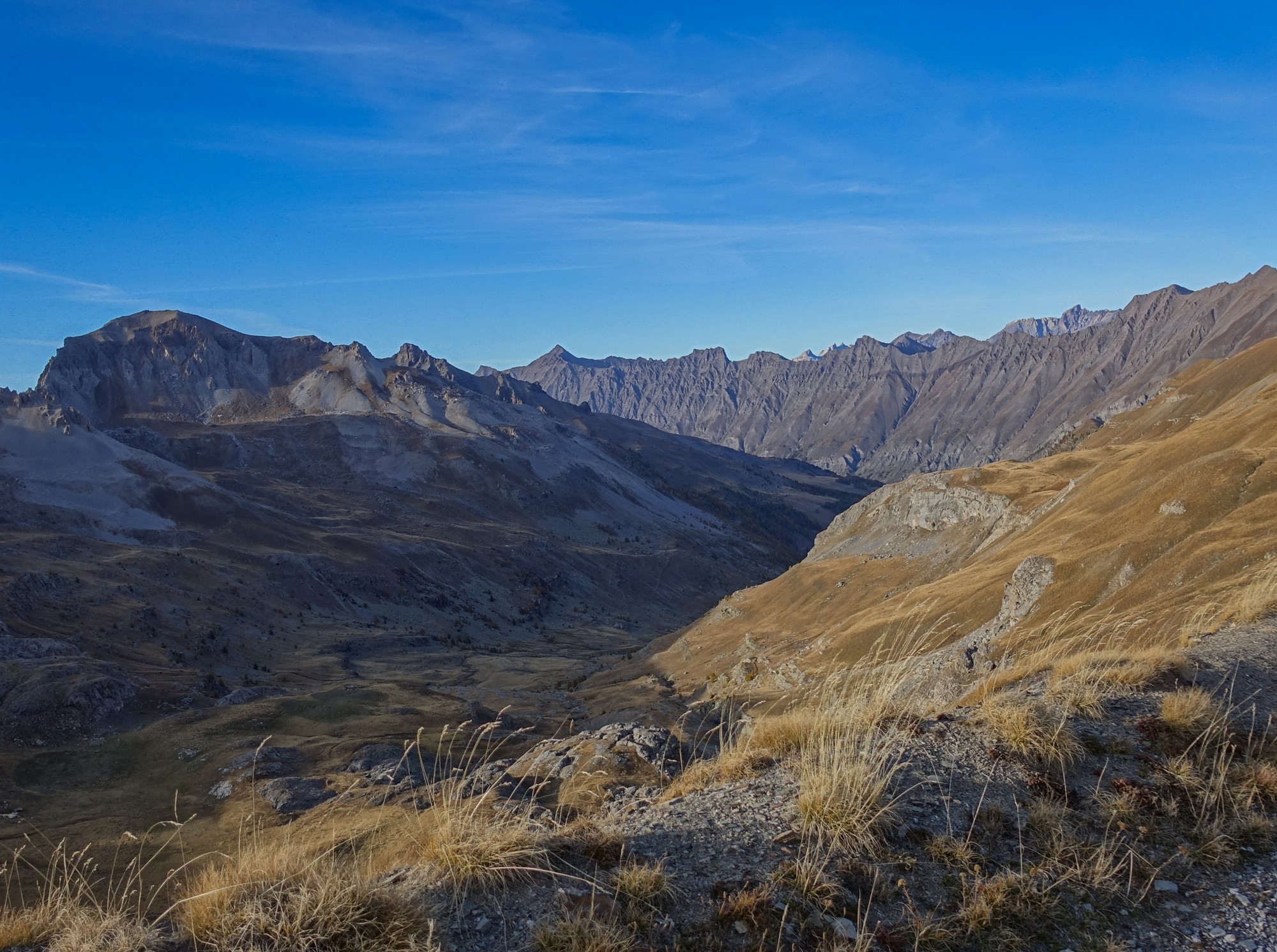 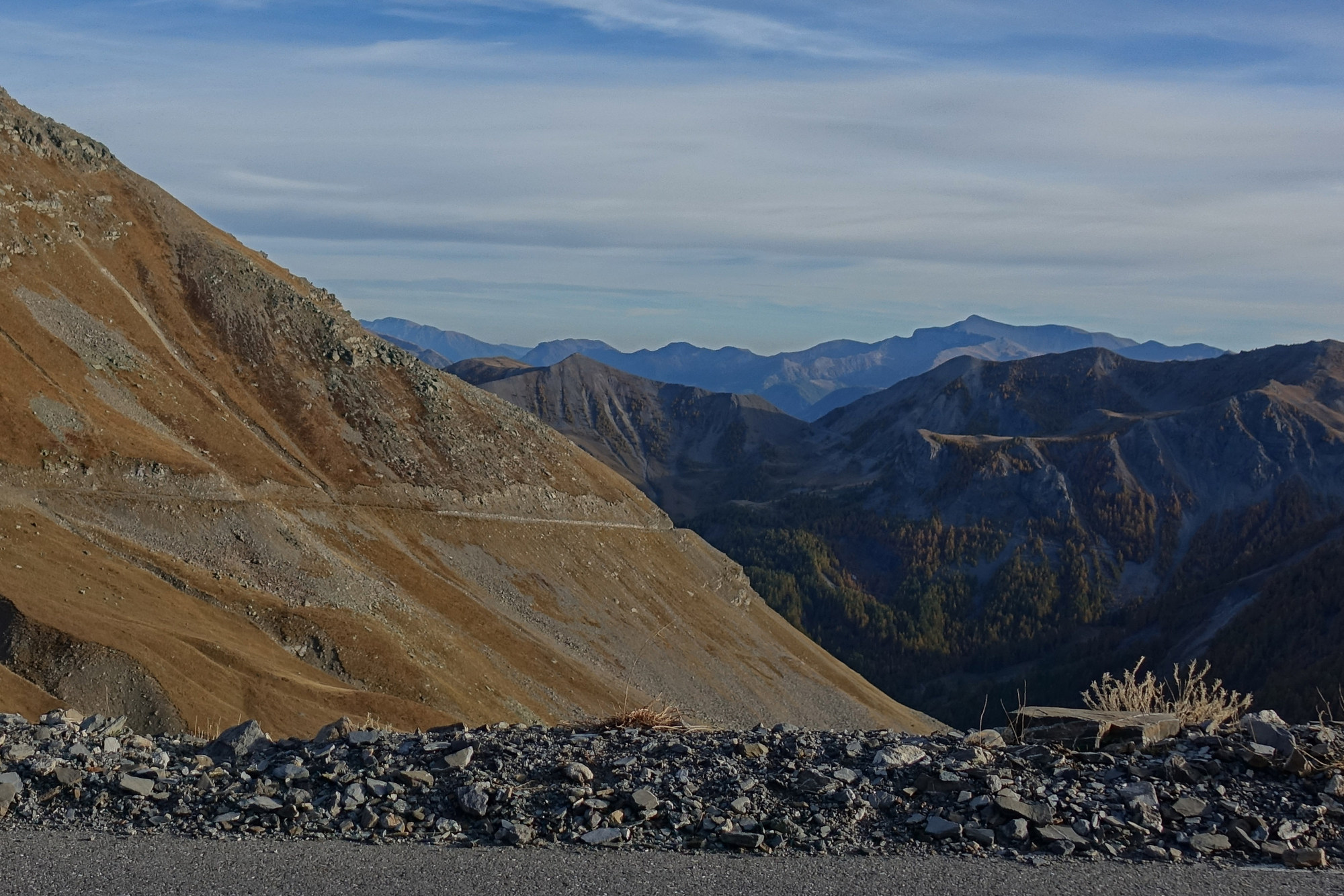 I passed through Bousieyas again (still deserted) and I finally reached the section of road along the Tinée. 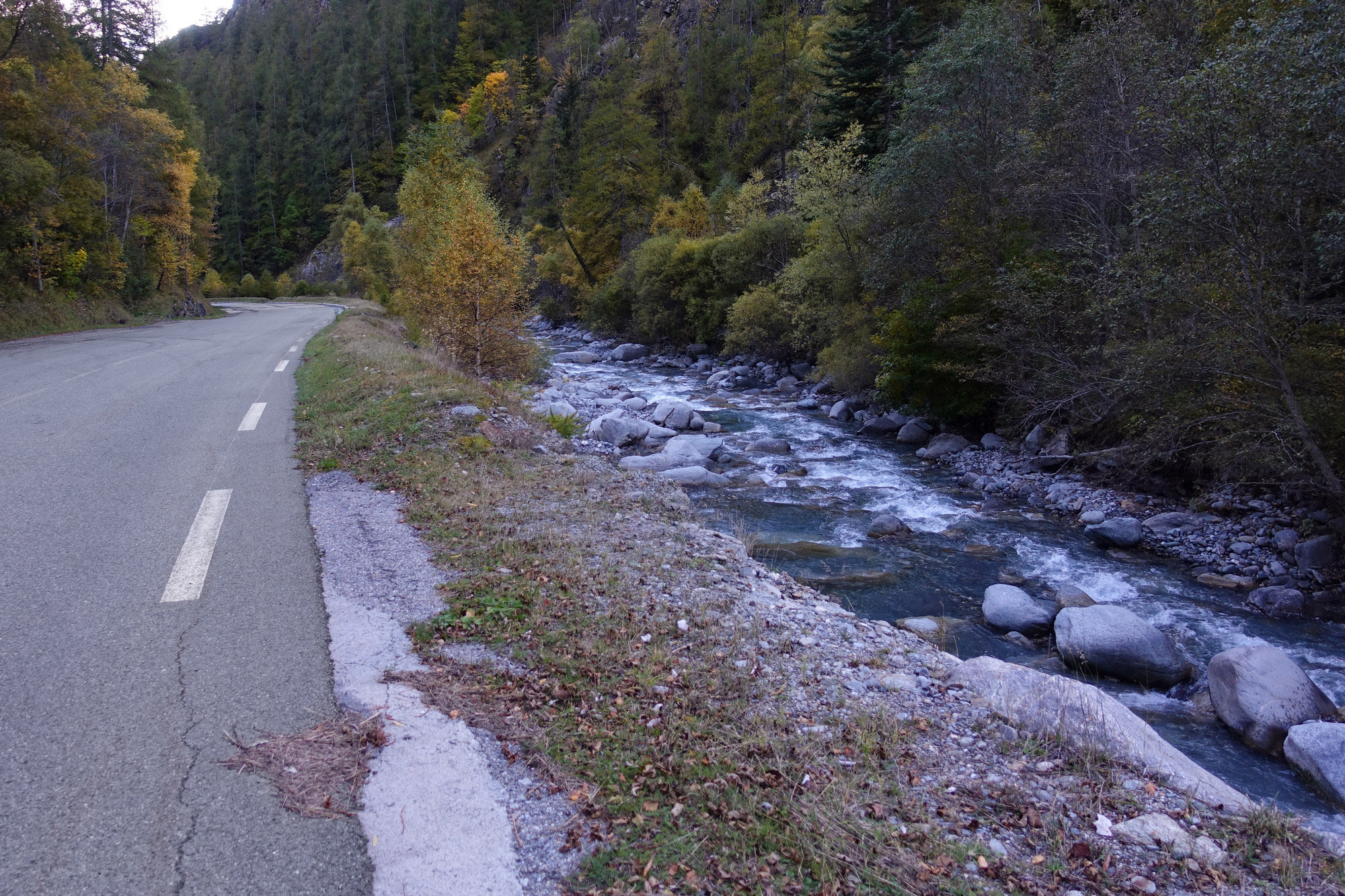 As mentioned several times previously, I feel very uncomfortable going anywhere near the edge on roads like this – especially on descents. I know it’s irrational to some extent and I don’t know if I’m getting worse. When I was up there I thought “I bet the tour de France has never been up here”. So when I got back I googled it and found that it has not only been to the col but right up to Cime de la Bonette. I also discovered what happens when a rider goes over the edge.

Robert Millar got to the top first in the 1993 tour here:

The spectators are standing with their backs to the drop!

And more recently, this is what happened when a rider went over the edge. I note in this one that the spectators are predominantly on the safe side of the road, away from the edge:

So that’s another famous climb I have completed. It’s also the highest I have ever been on a bike, and the highest I’m likely to go – 2804 metres or 9199 feet – more than twice as high as Ben Nevis and about a third of the way up Everest. It’s also the longest continuous climb – 5468 ft (1667m) or just over a mile vertically! It beats my previous longest of Mont Ventoux (5164 ft – 1574 metres). The obvious difference is that I did Mont Ventoux without stopping (and it had steeper sections). Still I’m pleased with today’s ride.

Being out of season, I saw only 5 other cyclists and very few vehicles. For much of the time I had the mountain to myself. That’s a good way to experience it. And less risky. Of course I had a much colder descent than I would have had in July or August.

I think I’d have been disappointed with myself had I not done the extra bit and reached the Cime de la Bonette. So I’m glad there was no col sign at the col and that those guys chatted long enough for me to get my breath back!