The forecast was for light rain to start around 1:30 so I thought I’d get out on a quick ride that involved a long climb directly from where I was staying. That way you can turn around at any point and get back very quickly if it starts raining hard.

I left at midday. Temperature was about 8ºC, almost 20 degrees cooler than Monday’s ride! I wore a long-sleeved base layer, long-sleeved roubaix top and a really good winter jacket. Also I had a snood round my neck and over my head and long-fingered gloves, Wooly-Booly Defeet socks, long leggings and Castelli Toe Thingy’s over my shoes – I was taking no chances! For a flat ride this would have been over-dressed, but not for one that would involve a long descent.

There was misty rain over the hills but I started off in the dry, with a hazy sun, enough to cast a faint shadow on the road next to me. I rode a couple of hundred metres into the town of Puget Théniers, and the climb began immediately, up into the hills to the north. Four miles and 1000 feet later I arrived at the turn-off to Auvare. This was the road recommended by that guy I’d spoken to on Monday. 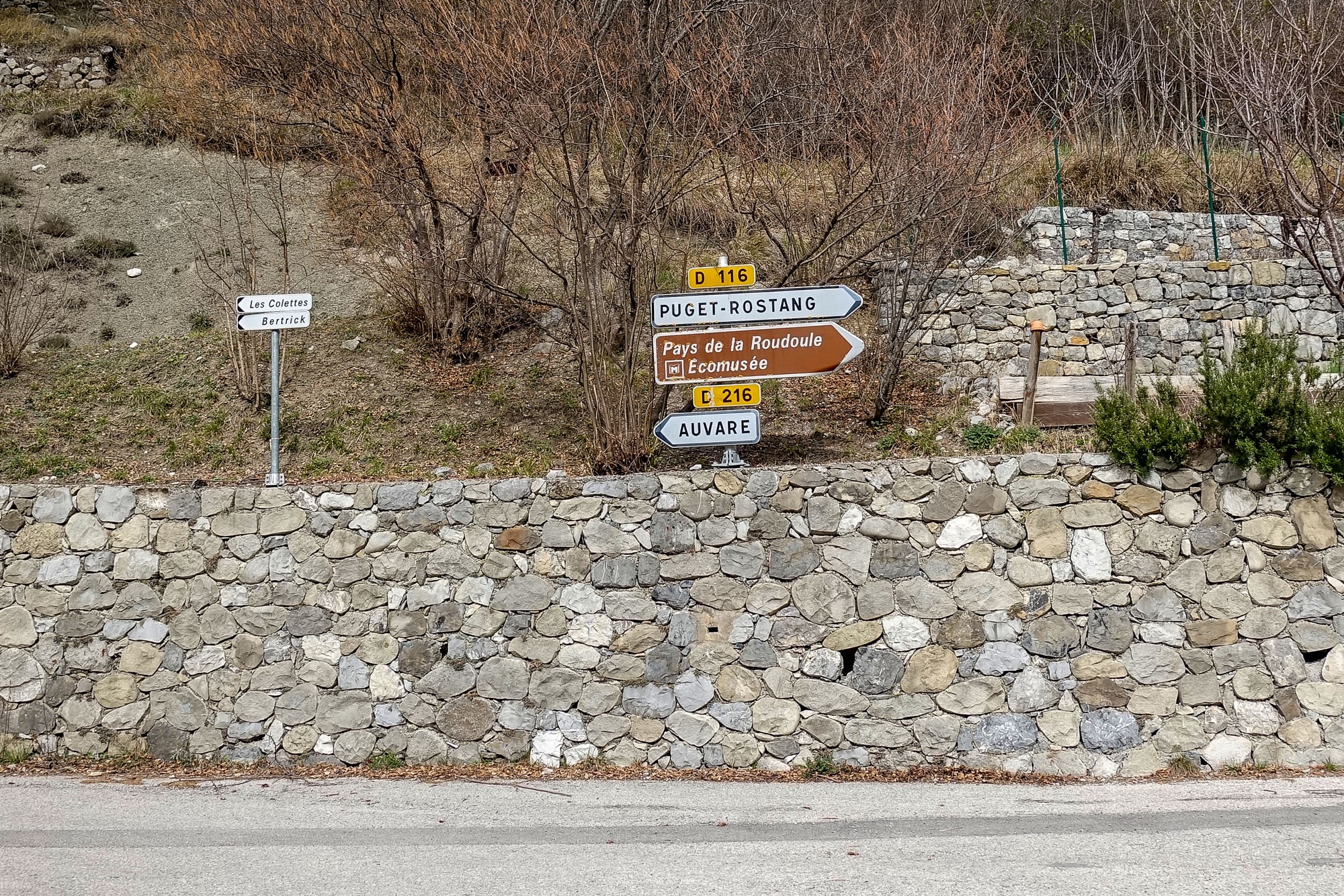 Up to this point it had been tough again,  sometimes resorting to my new 36T cog, as I ground my way slowly up the relentless gradient. I was sightly too warm, but unlike Monday when the weather was to blame, this was due to all my layers, combined with the effort.

Immediately after turning towards Auvare I felt spots of rain in the air. But still the hazy sun was visible through the mist/rain over the hills. The spots of rain persisted for the remainder of the climb. The road was still dry. 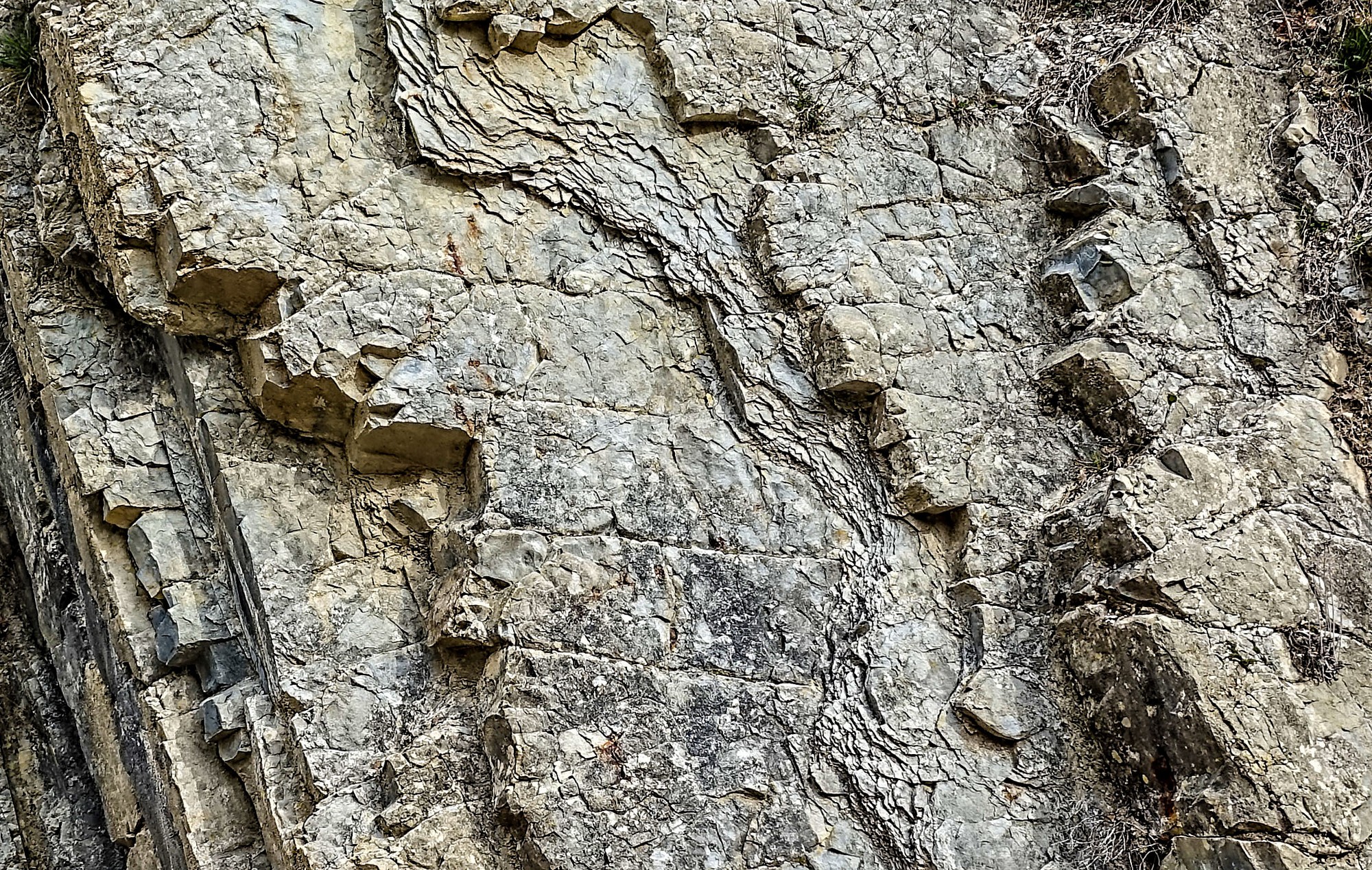 I found the climb very tough and I kept reflecting that I had done this climb back in October with no problem. It just made me realise the difference in my fitness level since then. I had forgotten how far the road was to Auvare from Puget Rostang. It seems to go on forever. I was looking out for the stretch of road where you can see over across the valley to Auvare but it was a long time coming. My wrap-round goggles were misting up on the ascent, no doubt caused by a combination of moist warm air getting trapped behind the glasses, the cold air ‘outside’ and the lack of air movement because of my slow speed and the wrap-round design. I could clear them by pulling them away from my face slightly to let more air in.

The twists and turns never ceased. Somewhere, a few k from the top, I realised that white stuff was settling on my sleeves, so the rain had turned to sleet. But still the sun was faintly visible. Eventually I did see the view of Auvare through the sleet 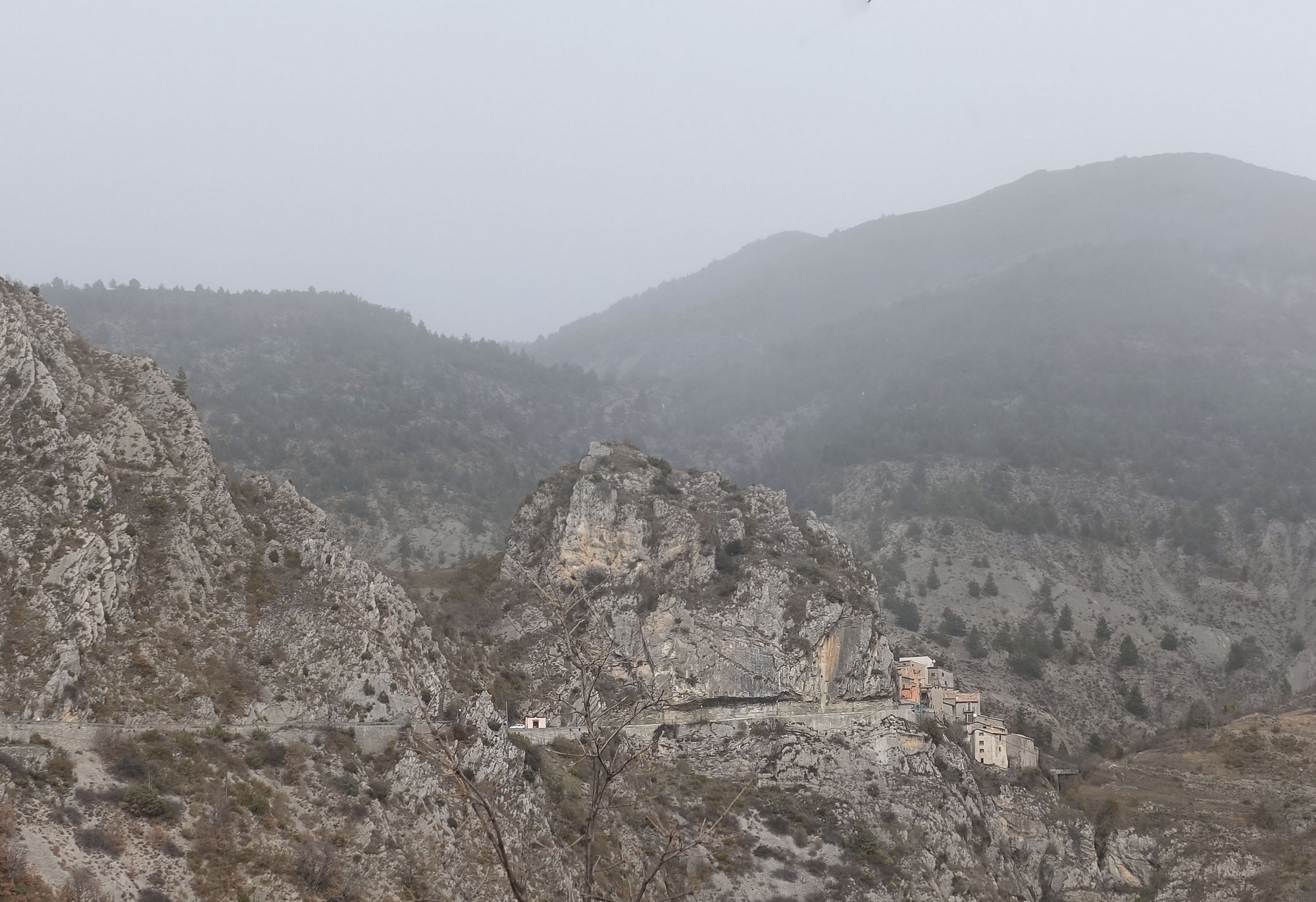 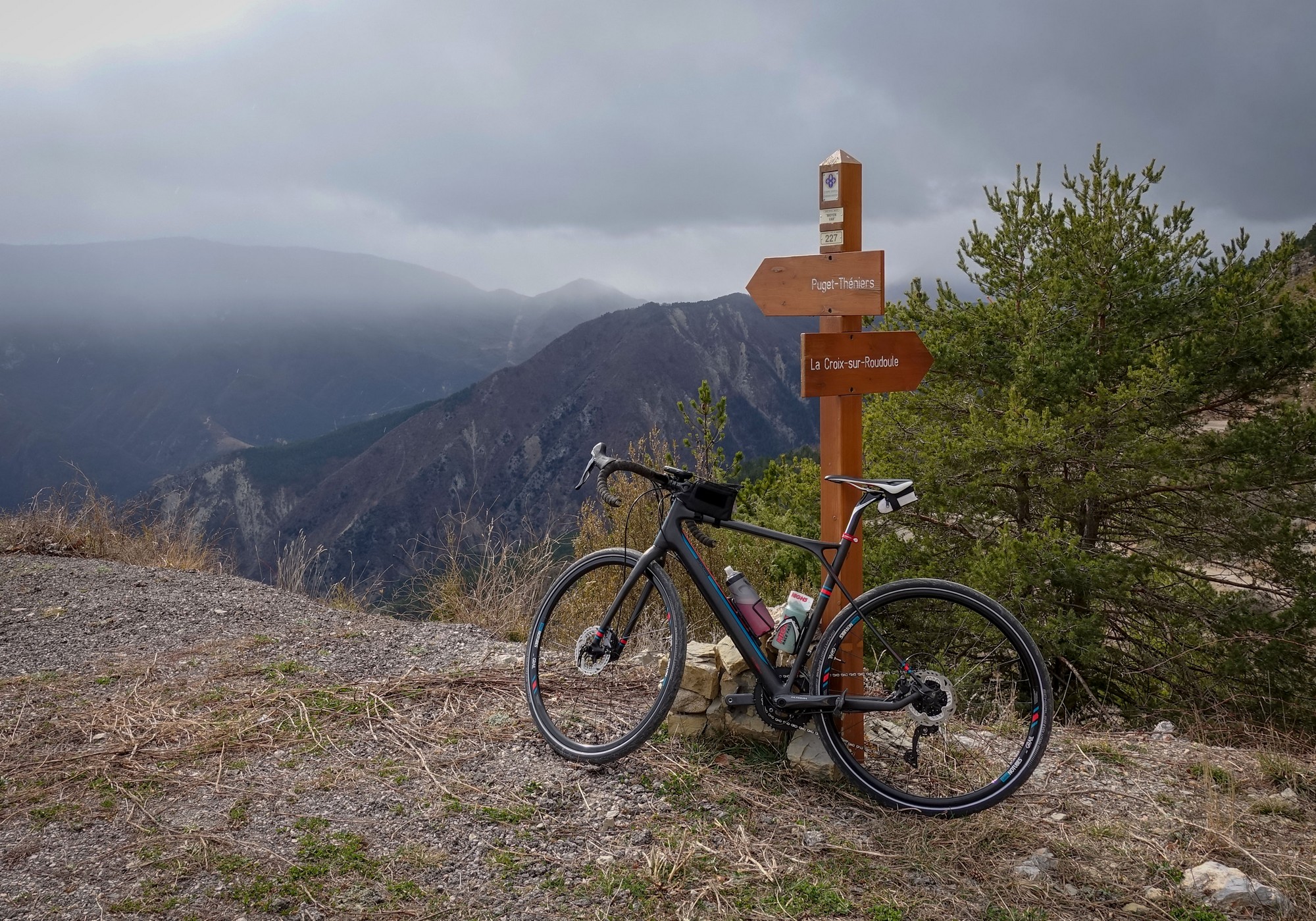 It looked a whole lot different than it had last October 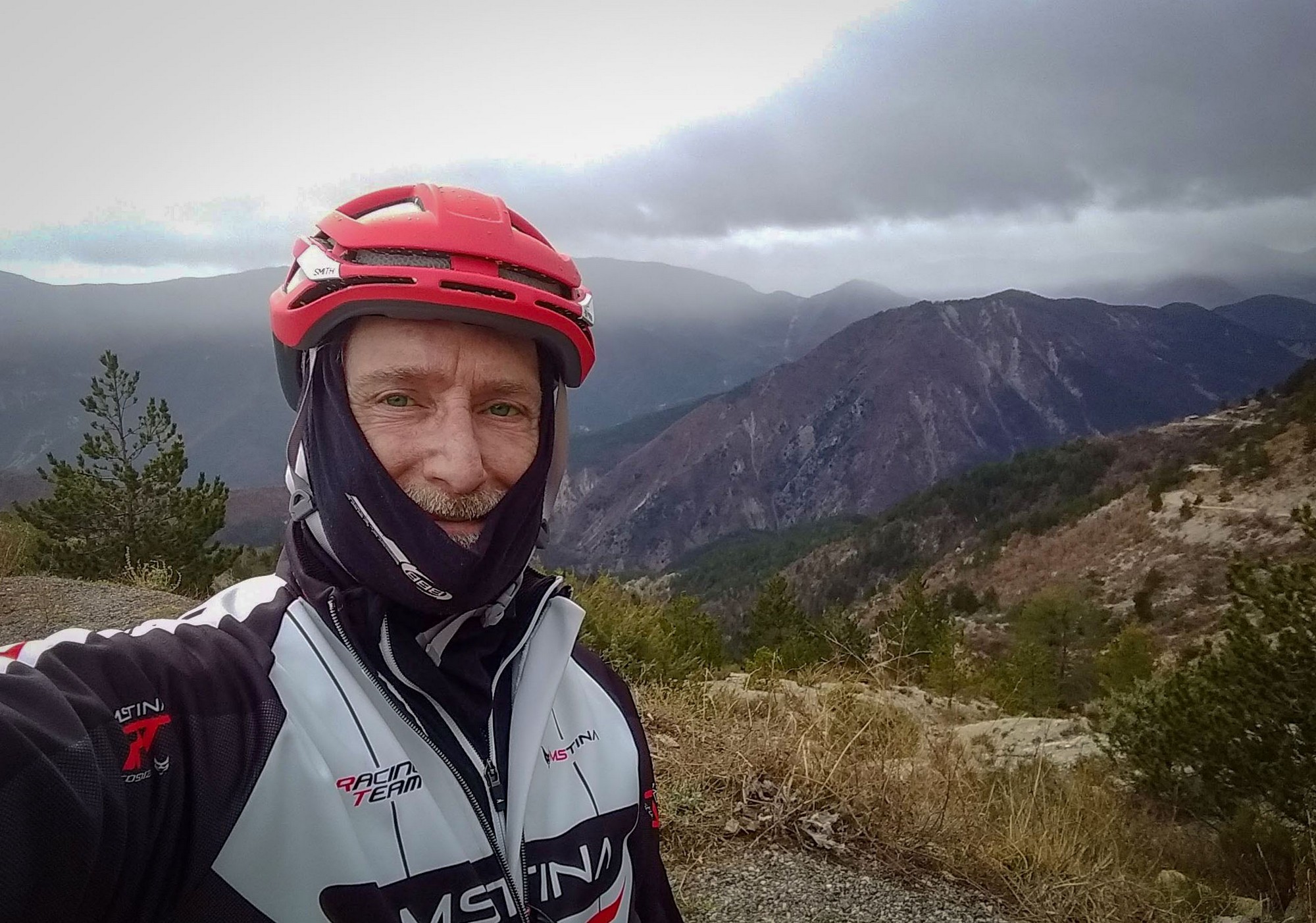 I didn’t hang about up there. I wanted to get back down before the rain moved in. I had pencilled-in a gravel section towards La Croix, but the weather put me off because it looked worse in that direction.

On the descent there was sleet in the air from the start, but gradually it turned to fine rain.  Further down, the watery  sun finally disappeared and the rain became more persistent. The roads were wet enough to be splashing up off my wheels. Still I was going at a good pace, confident in the disc brakes and the fat tyres and the handling of the bike in general.

Disc brakes! What can I say? They gave me so much more confidence on that descent. I wouldn’t have wanted to be on a bike with rim brakes, especially in the wet. I can’t really describe the difference. I guess I’ve been a bit of a luddite up until now regarding disc brakes. I had always argued that if you can lock your wheels up with rim brakes, how much more braking would you need? Obviously I’ve been in situations where rim brakes have faded in the wet and also where they’ve got really quite hot on long descents in hot weather. I don’t think I’ll ever want to descend in the rain with rim brakes again!

On the way down, some of the views looked quite rugged with the grey mist and bare trees, giving it a whole new sense of beauty, different to how good it looked under the blazing sun in October 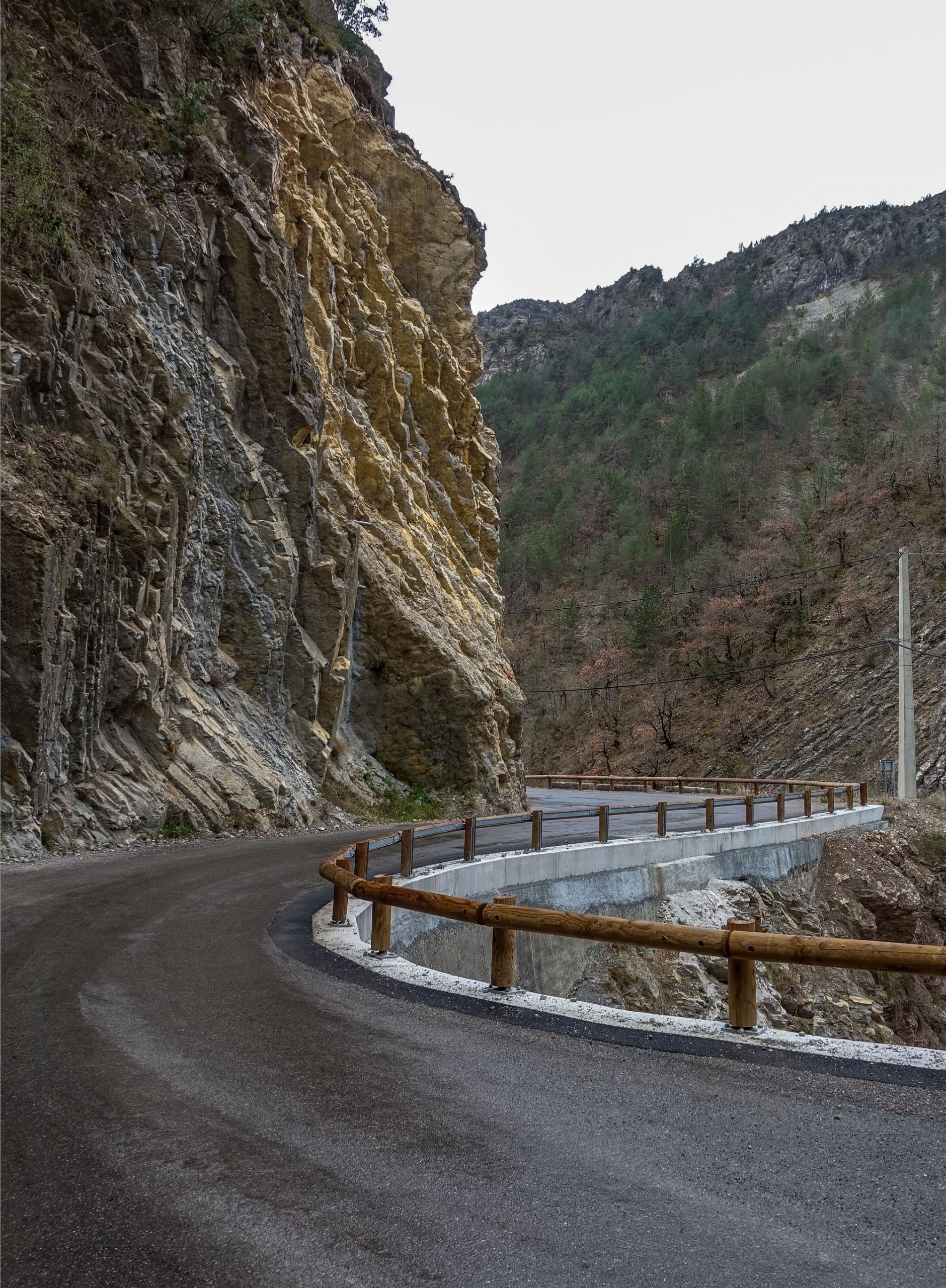 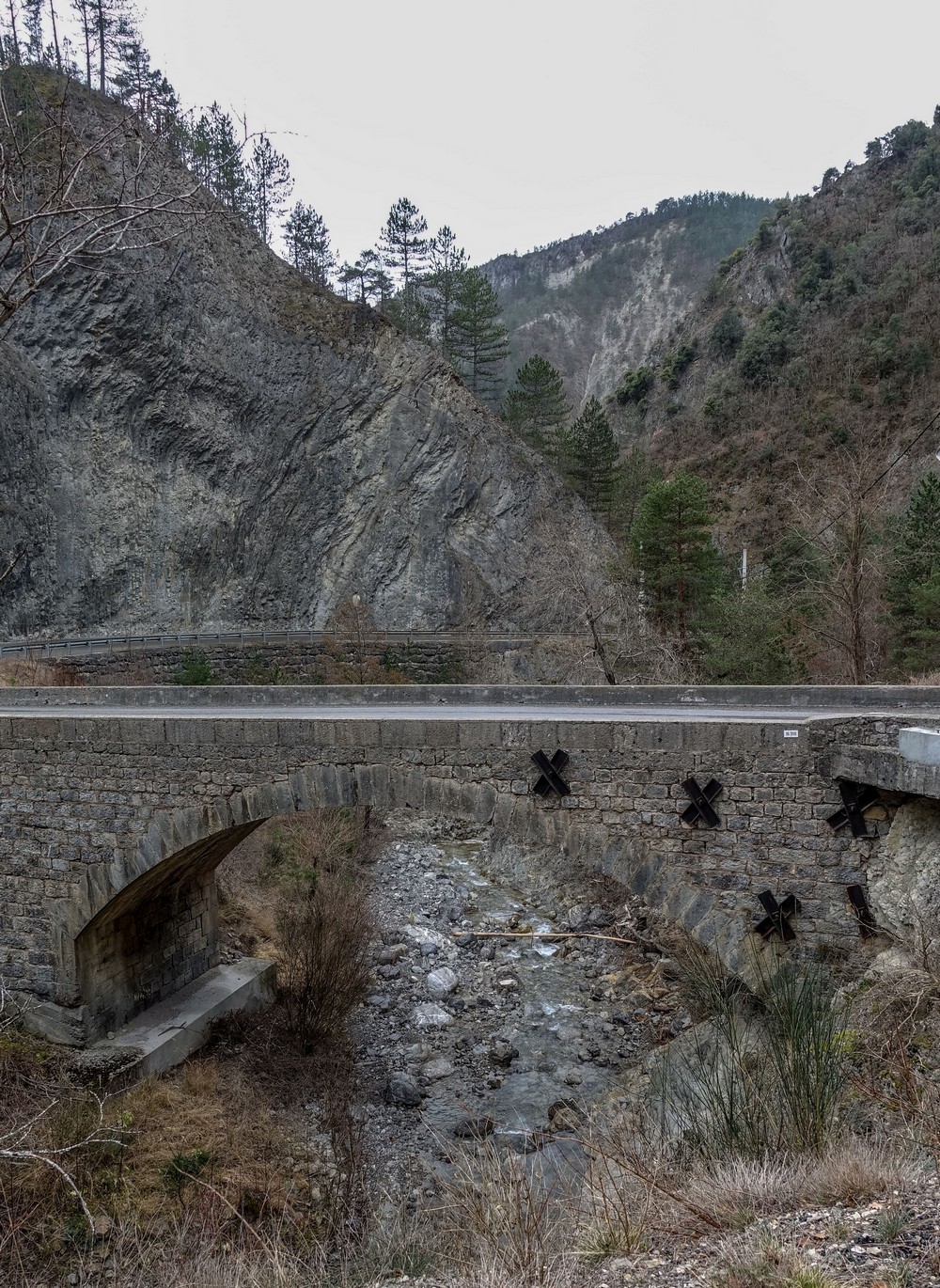 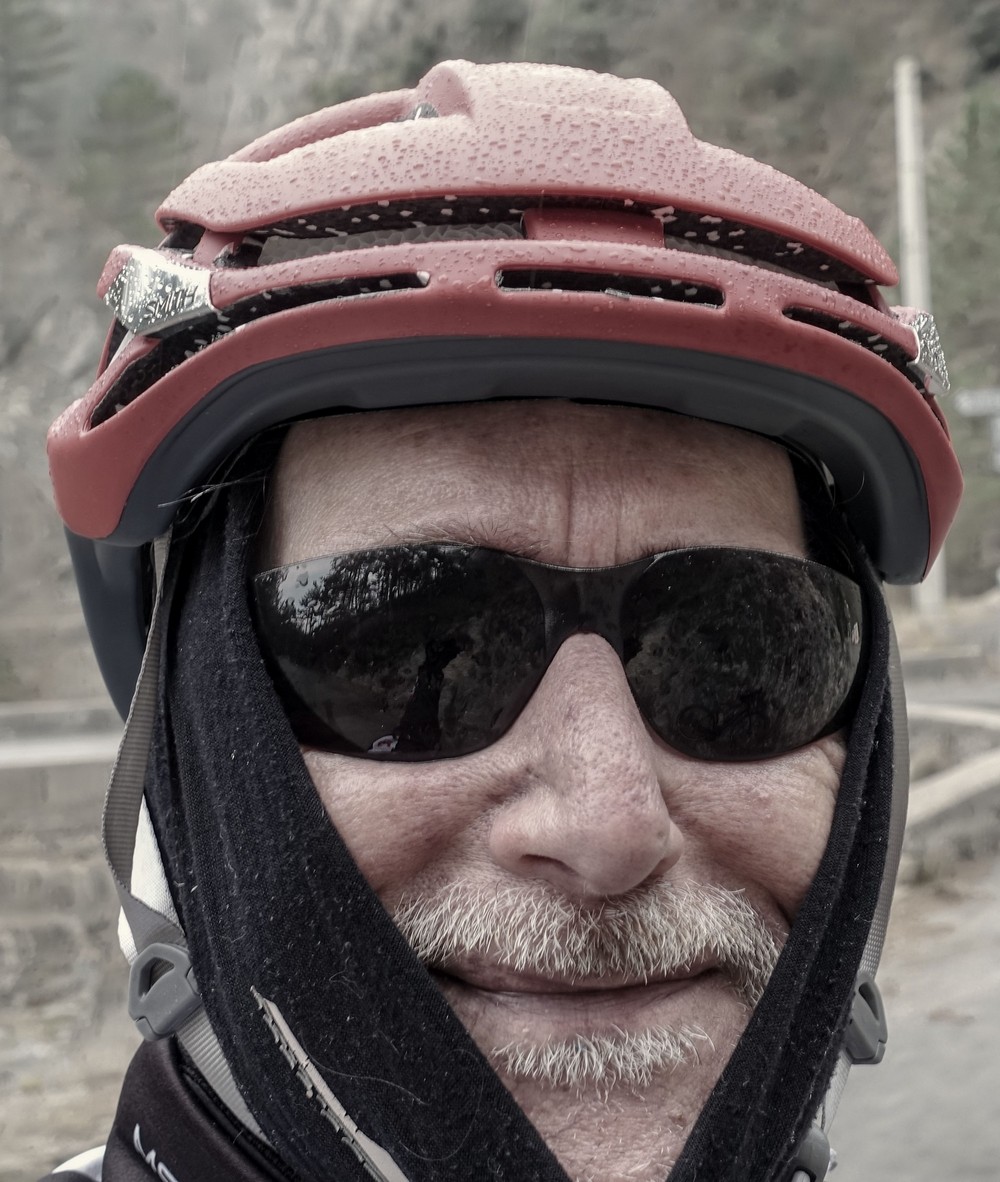 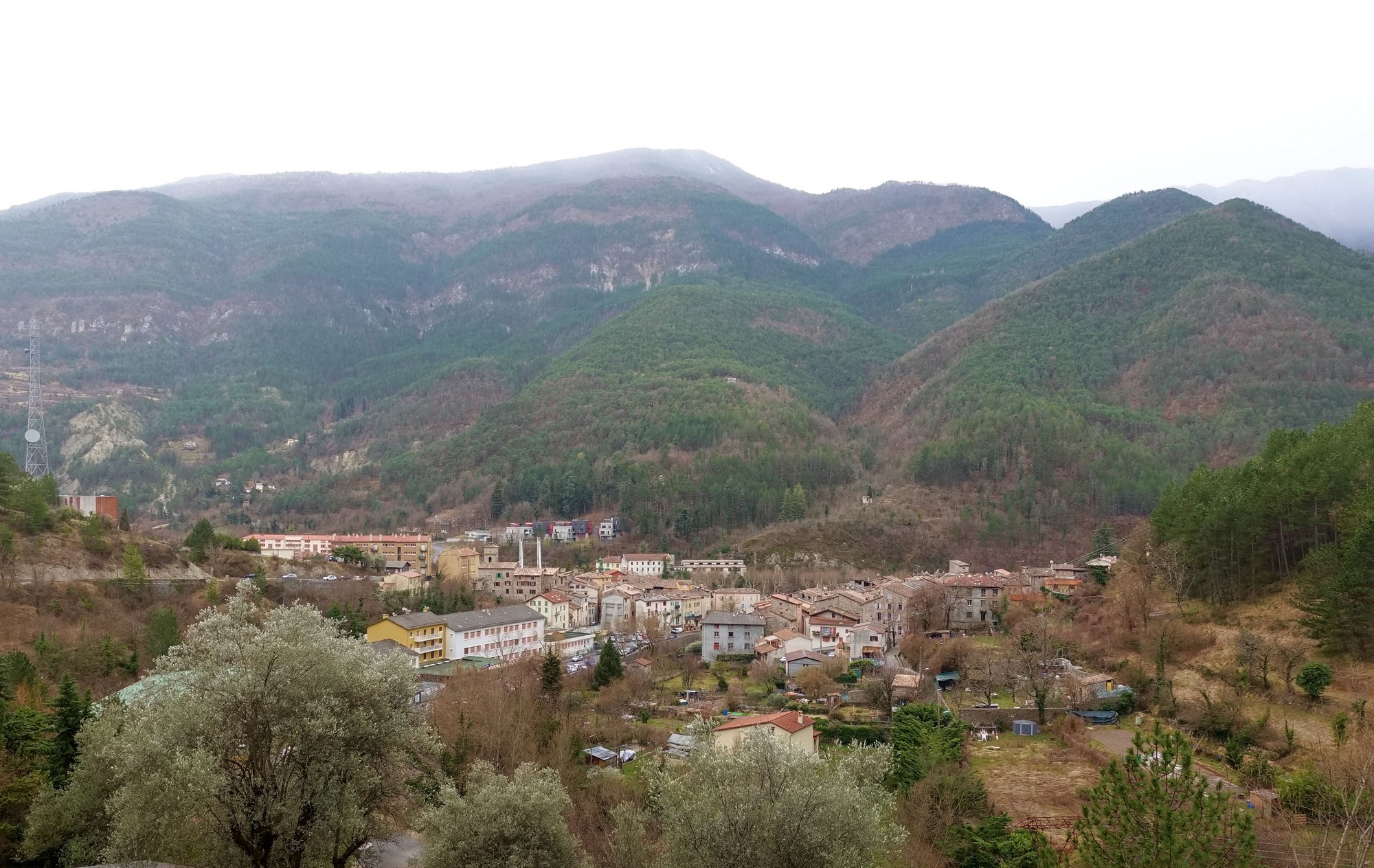 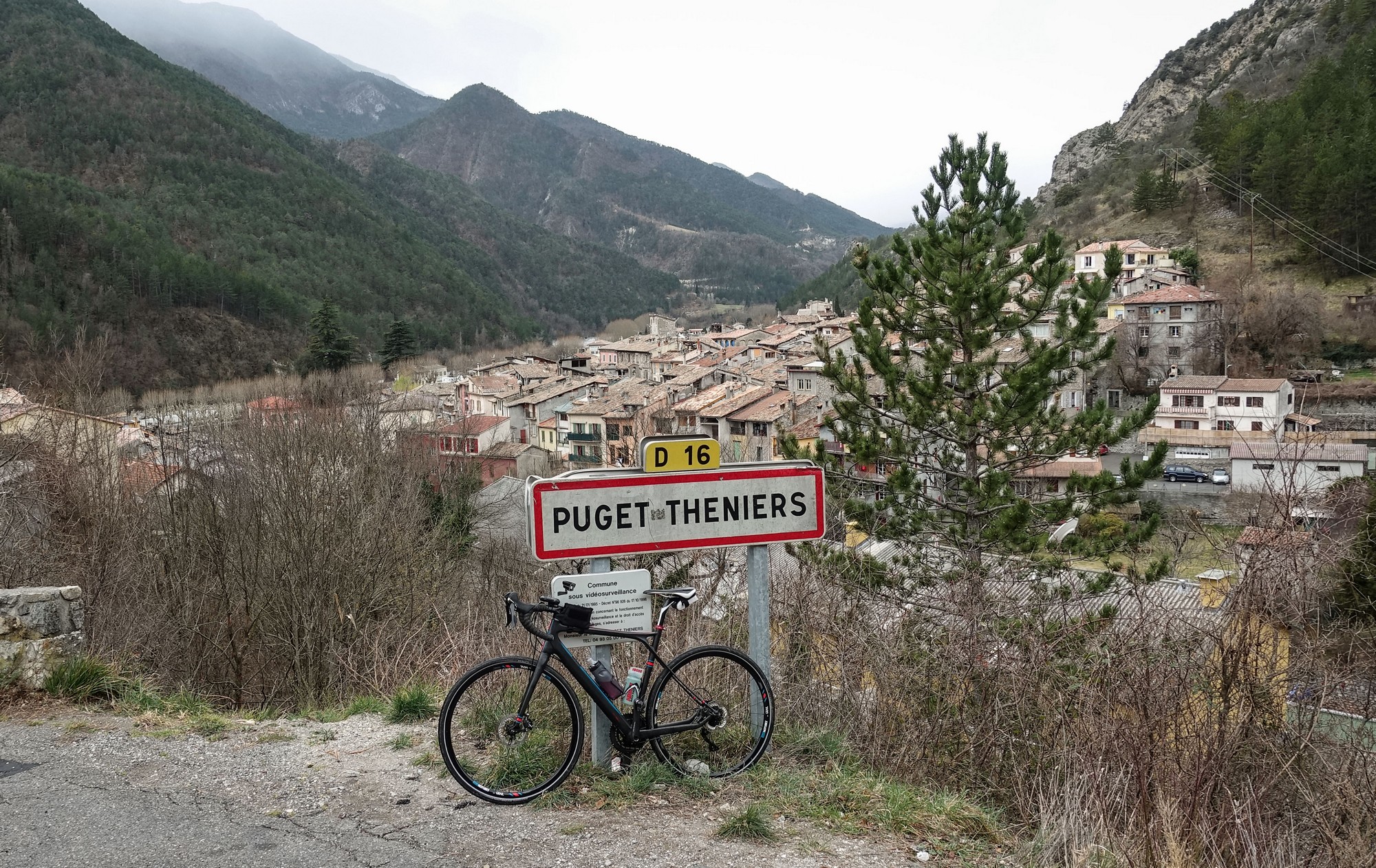 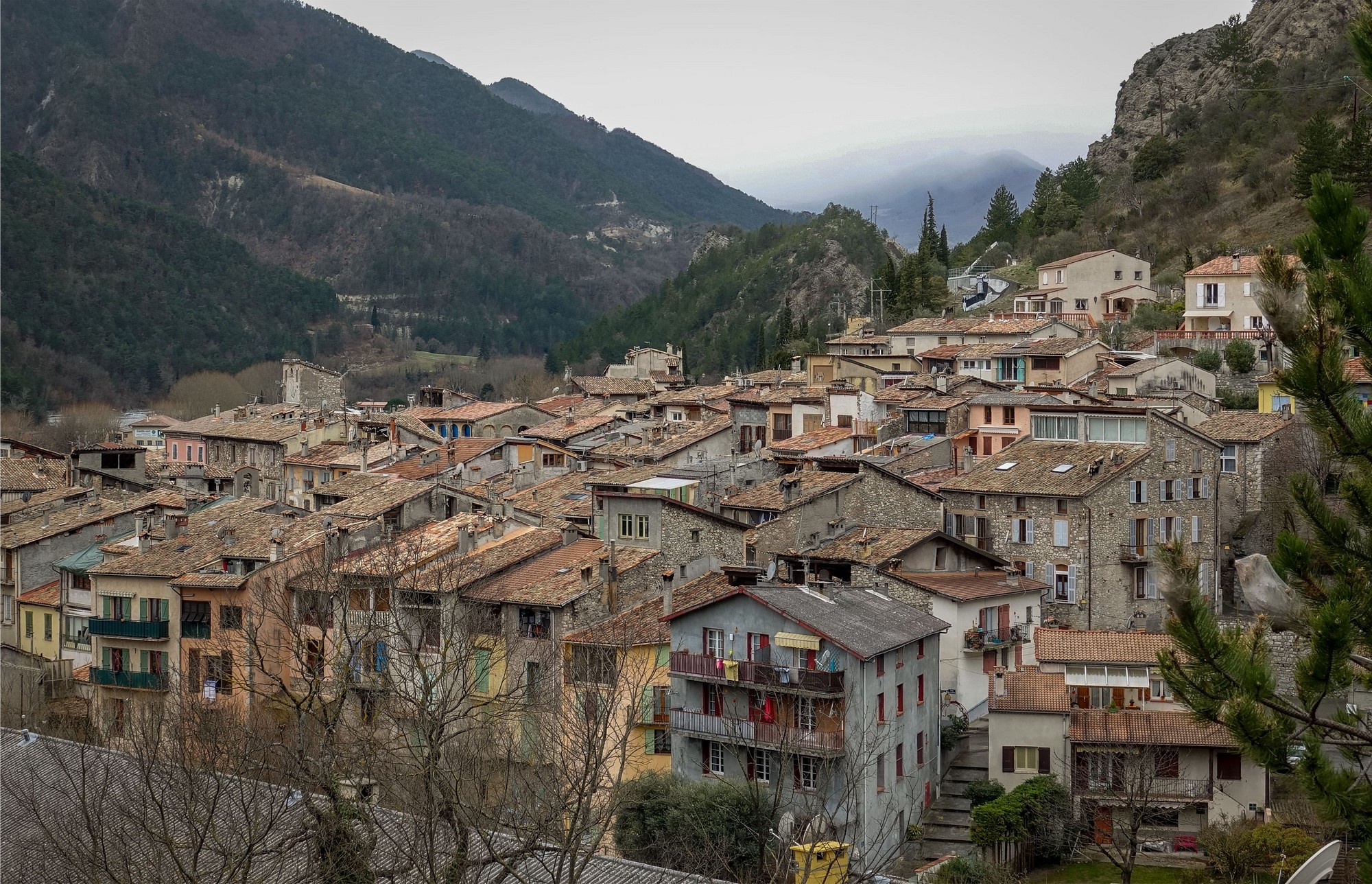 I got back about 2:25. Just five minutes later it really started raining properly, so the timing had been perfect. I’m really glad I went out and hadn’t um’d & argh’d about the weather.

The disc brakes were quiet; the freewheel hub was quiet; the drive chain was quiet. I’m really pleased with the bike. 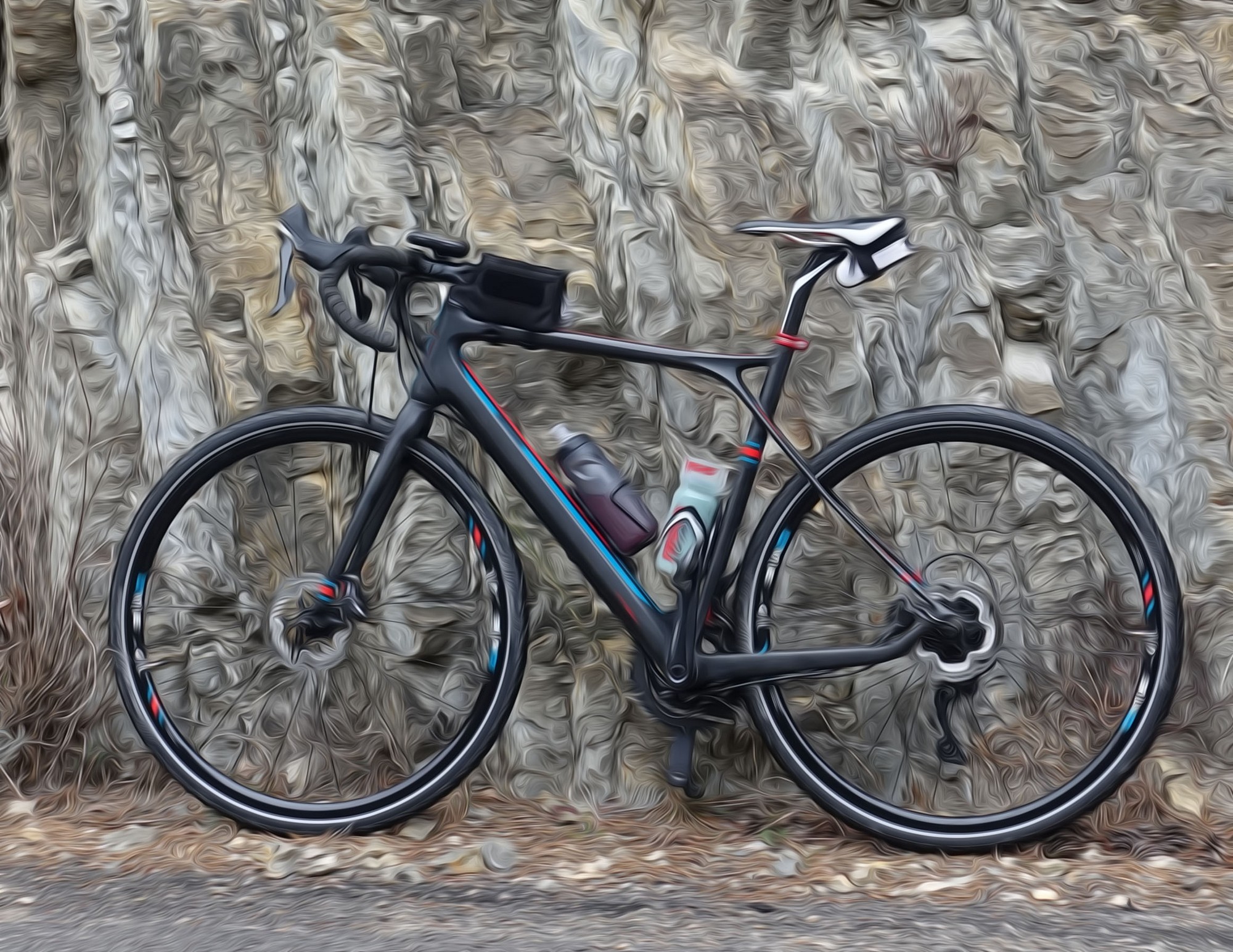