This route was a cut-down version of the 70-miler that I had to abort ten days ago. I left at 12:20. Reports at various times during the ride.

Just reached col de Saint-Raphael, my old favourite. Came up it very strongly, I thought. Sunny day, chilly in the shade especially when sweating! No roadworks this time so a non-stop effort. Beat my previous time by nearly four minutes. Hopefully the next bit of this ride will be in the sun.

Well I’ve just come through Ascros. I didn’t stop to take any photos at all and just came straight up this time. 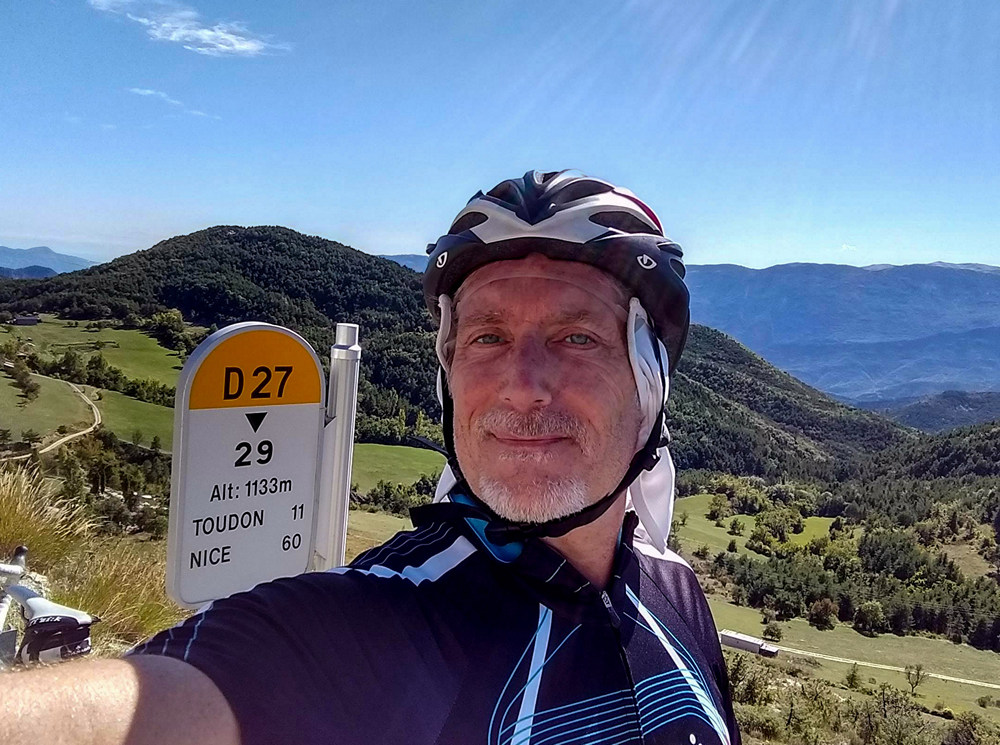 I’m looking out into the distance and there are no clouds like there were last time – it looks beautiful. 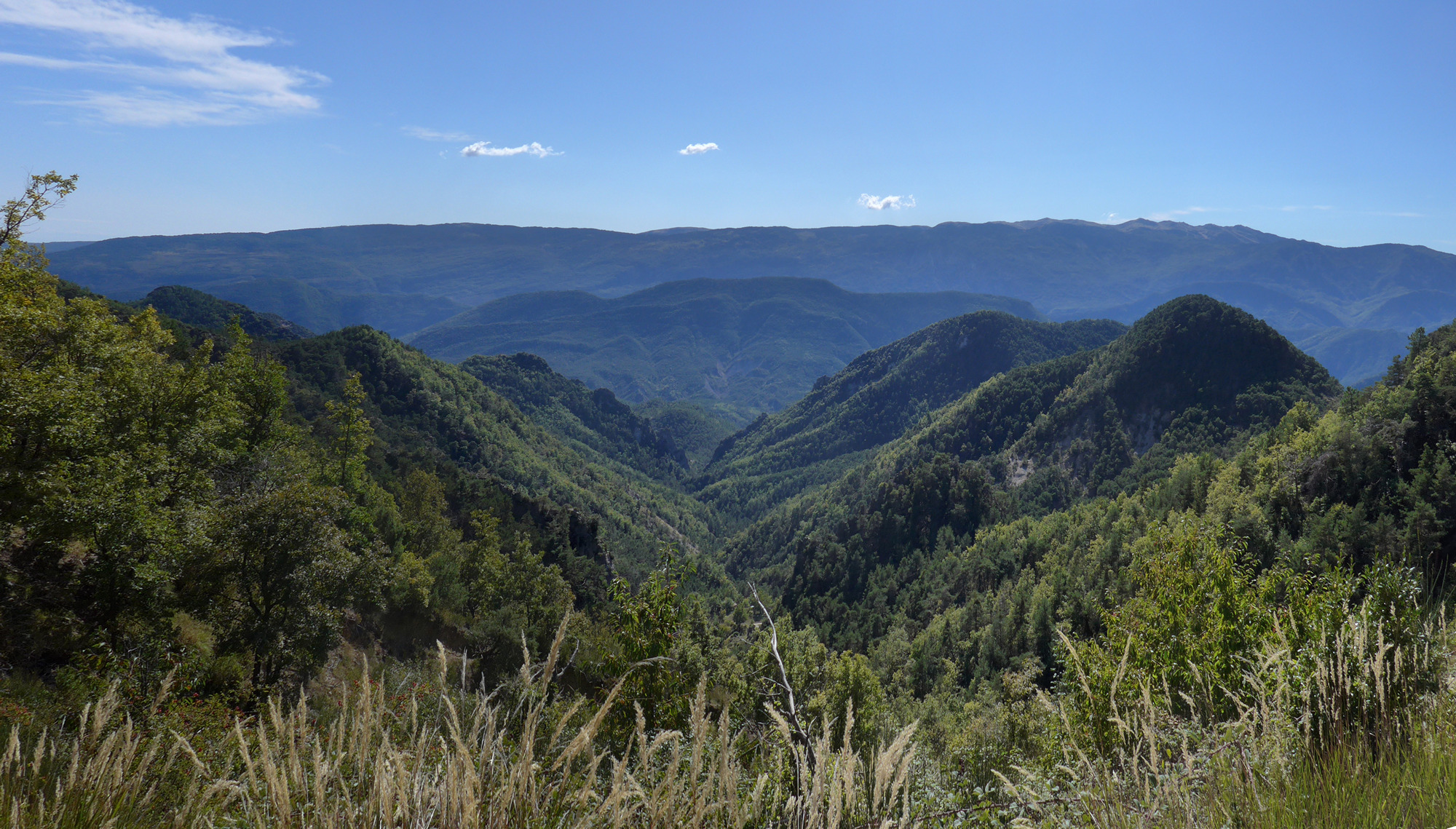 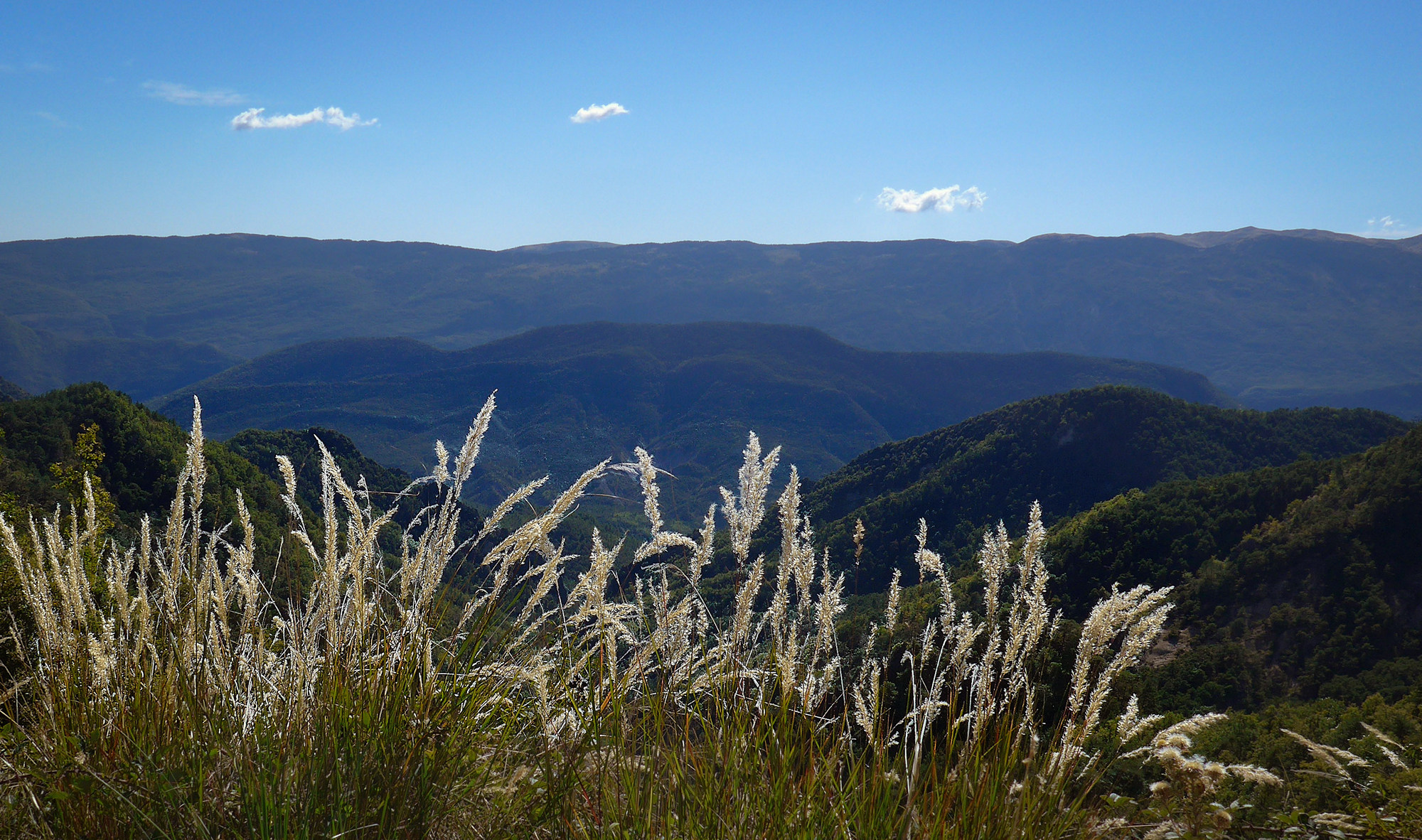 The bad news is I’ve just seen that there’s a road closed at Toudon and some sort of diversion, so who knows where that’s gonna take me. 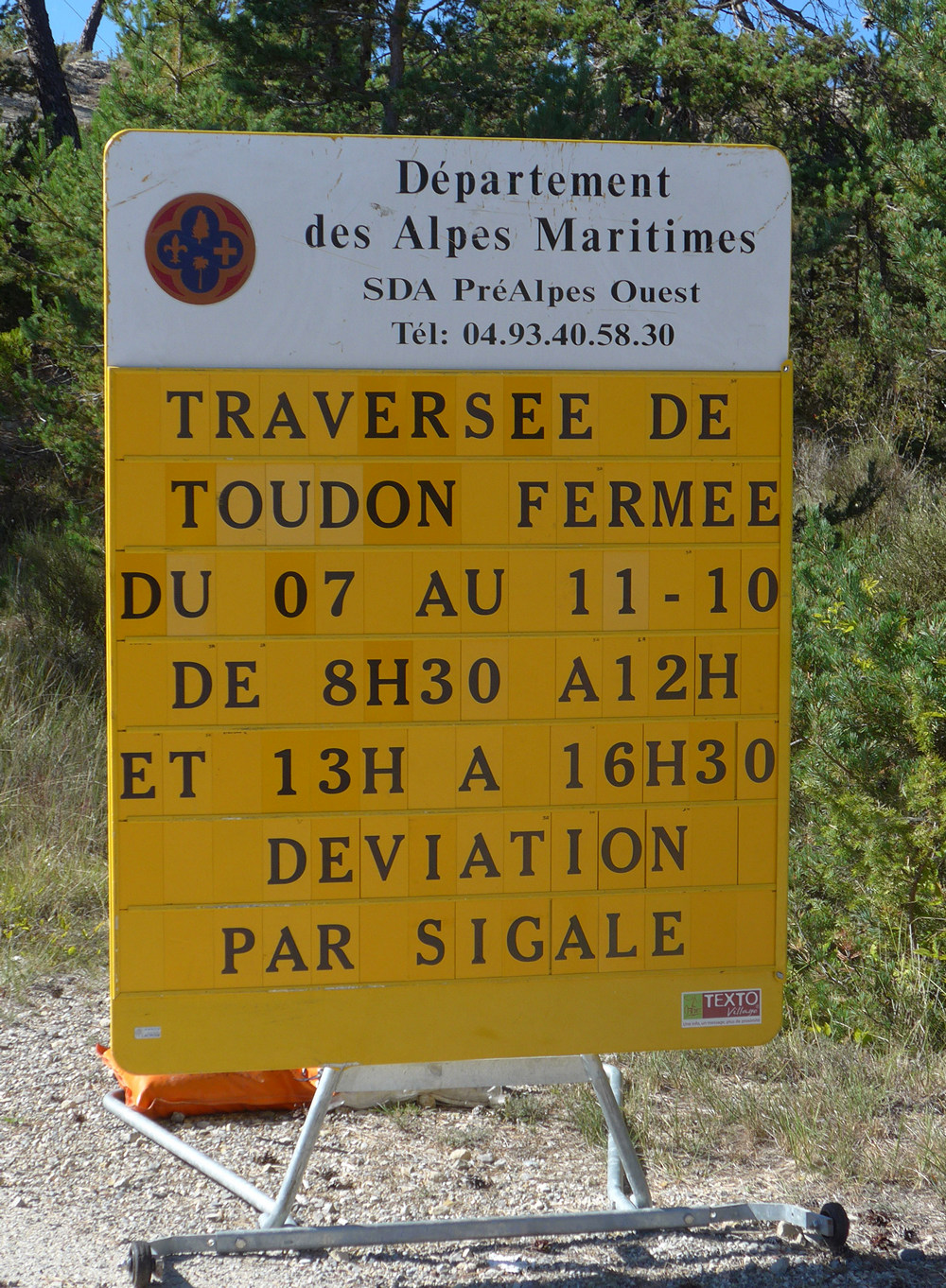 Feels like every time I try this route it seems doomed.

Just at the 20-mile mark. I had seen a sign that said the road was closed at Toudon . I carried on anyway and was soon into new territory as I passed the point at which my Garmin had failed before.

A few miles outside of Ascros, a deeply-tanned and Santana-moustached cyclist was coming up the hill towards me, so I stopped him and asked him if the route was open. He didn’t say no, but he rocked his hand from side to side as if to say it was ‘iffy’. So I took that as a good sign, thanked him, and carried on. Just before coming into Toudon, I saw another cyclist coming towards me and I thought this time I’d start the conversation from a distance so we wouldn’t have to stop, so I asked loudly ‘la route est ouverte?’ He replied saying something about ‘à pied’. So I thought that’s ok I can walk my bike past the roadworks. Then just about as he was passing me he said “you have to get off your bike”, in what sounded like a distinctly English accent. So I said “cheers mate”, laughing as we both rode away from each other. Then I came into Toudon and there was just a bit of resurfacing going on. 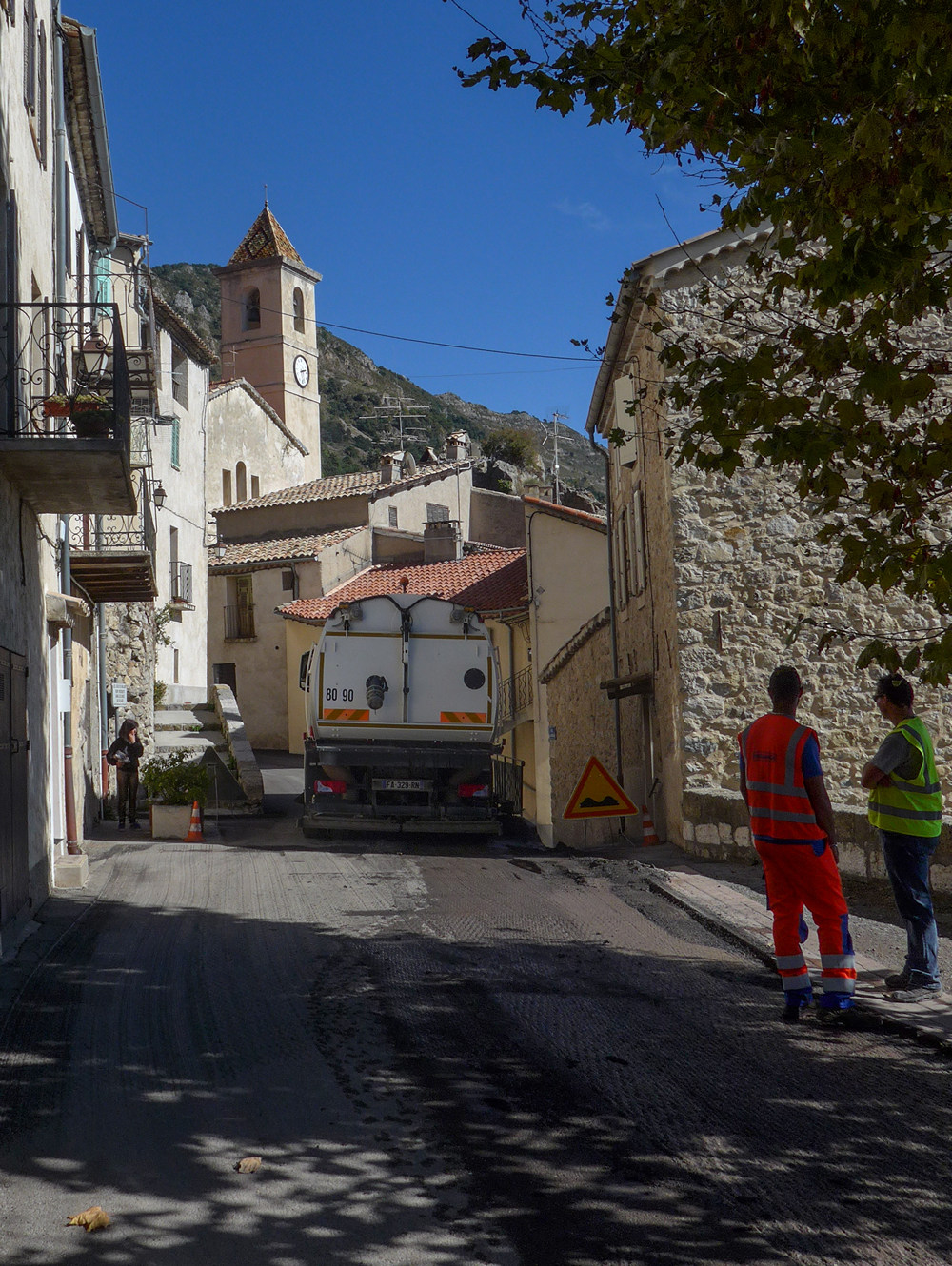 It was easy to walk past the lorries. 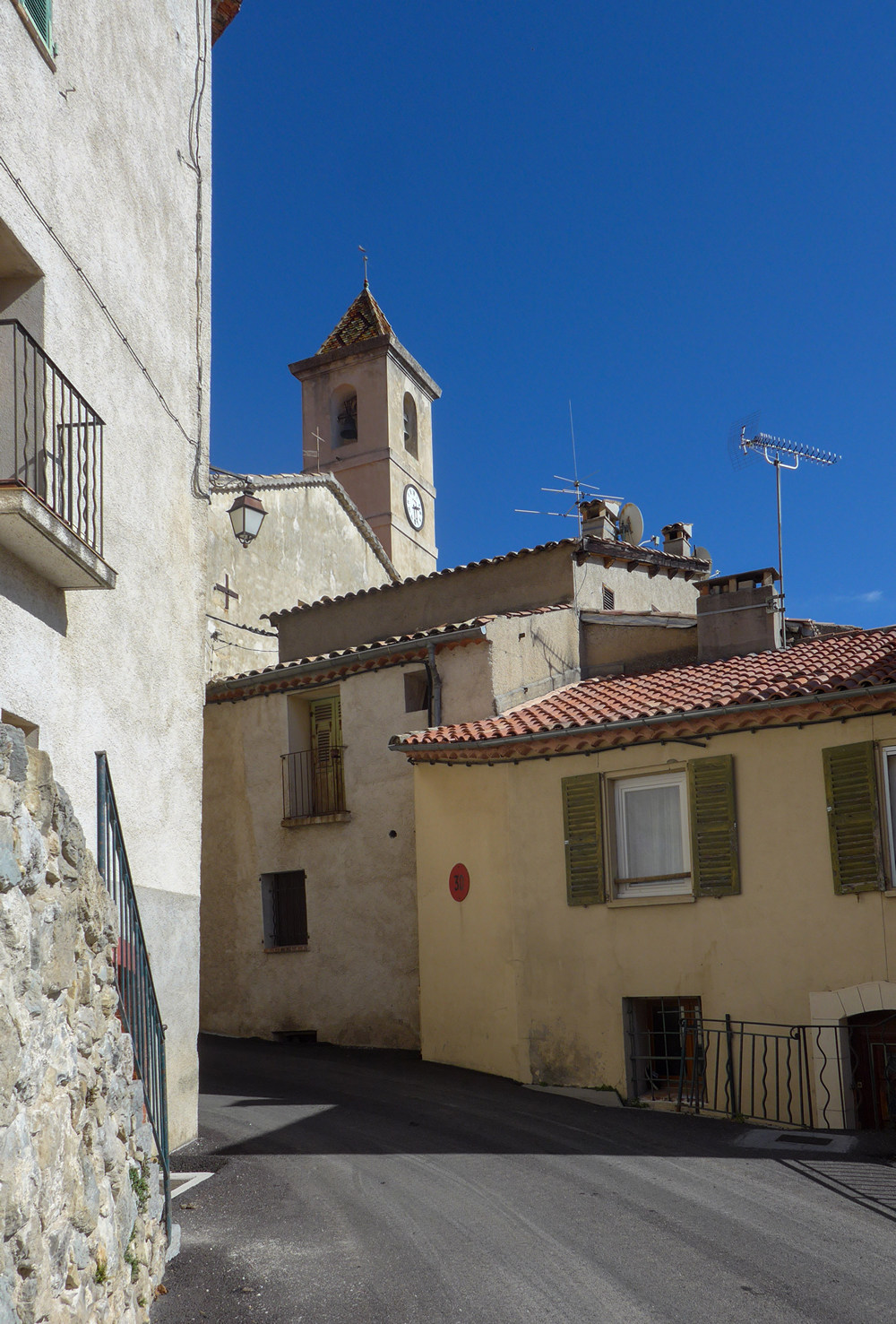 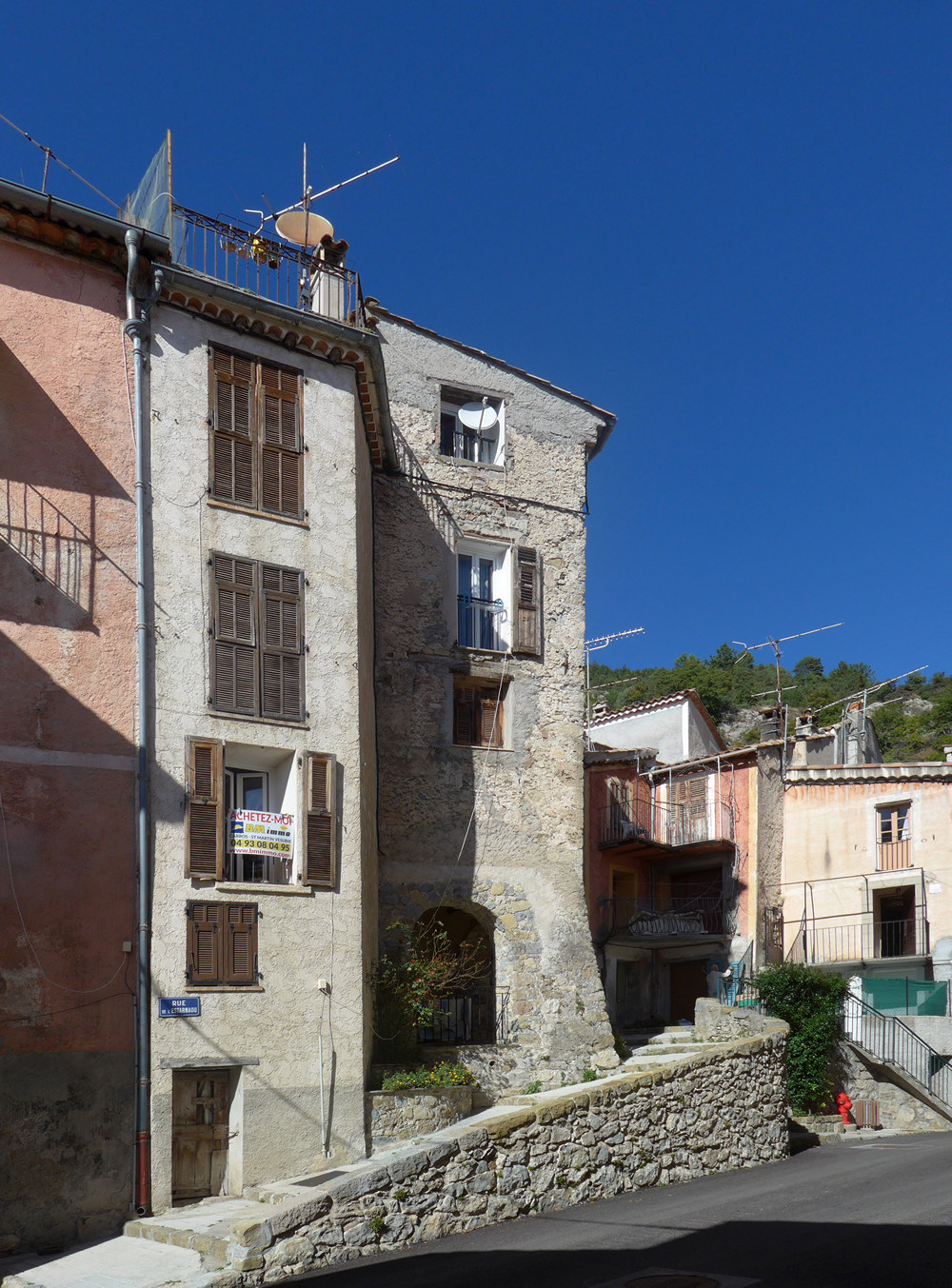 Now a couple of miles out of Toudon, I looked to my right and, lo and behold, there’s another village on a hill, so that’s why I’ve stopped, to take a photo.

The past 10 minutes my stomach has felt hungry so I might eat something as well. The sun is still shining without any clouds about. I have had good views of the Mediterranean; in fact at the moment I’m looking down at what I expect is the river Var in the distance, winding between hills. The air at the moment is warm, but I’ve been through some pretty cold patches that nearly made me put my arm warmers on.

Since the last stop there was about five miles of descent. Typically, as I came through the village of Revest-les-Roches, I remember the clock struck three, so I was bang on the hour as usual. 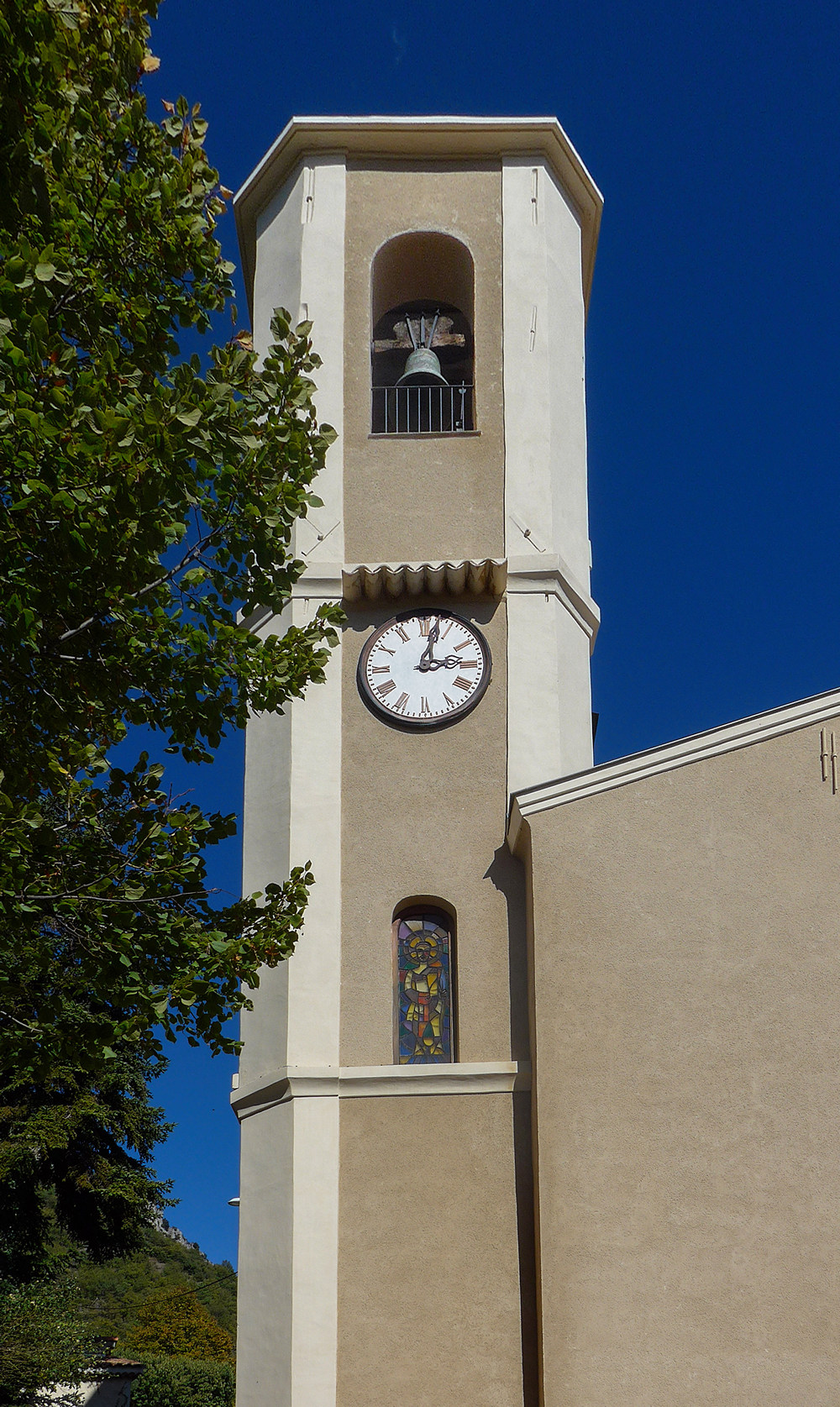 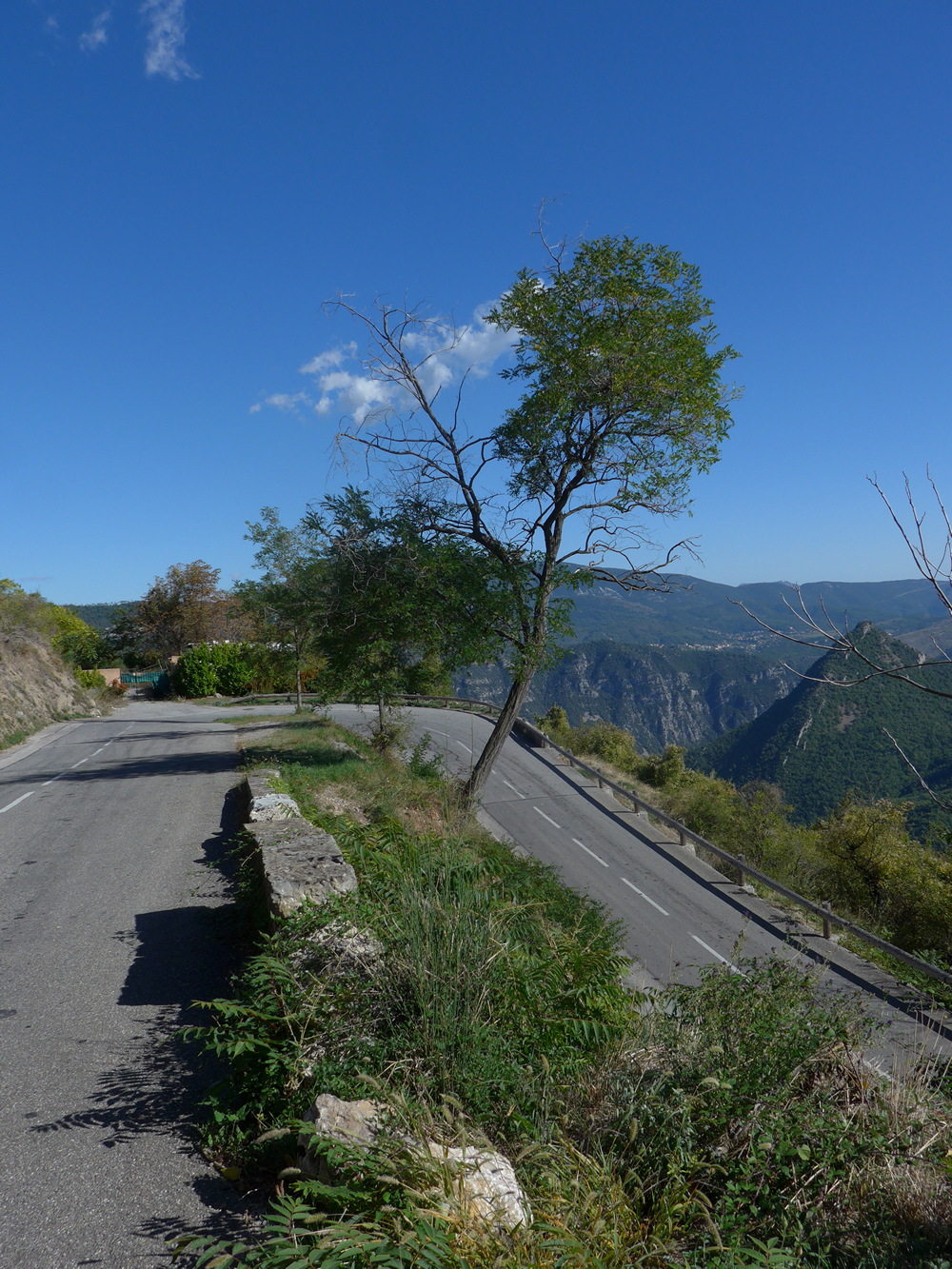 My planned route didn’t actually go into Gilette but I’ve taken a quick diversion into the village, or town really I suppose, and it’s lovely. 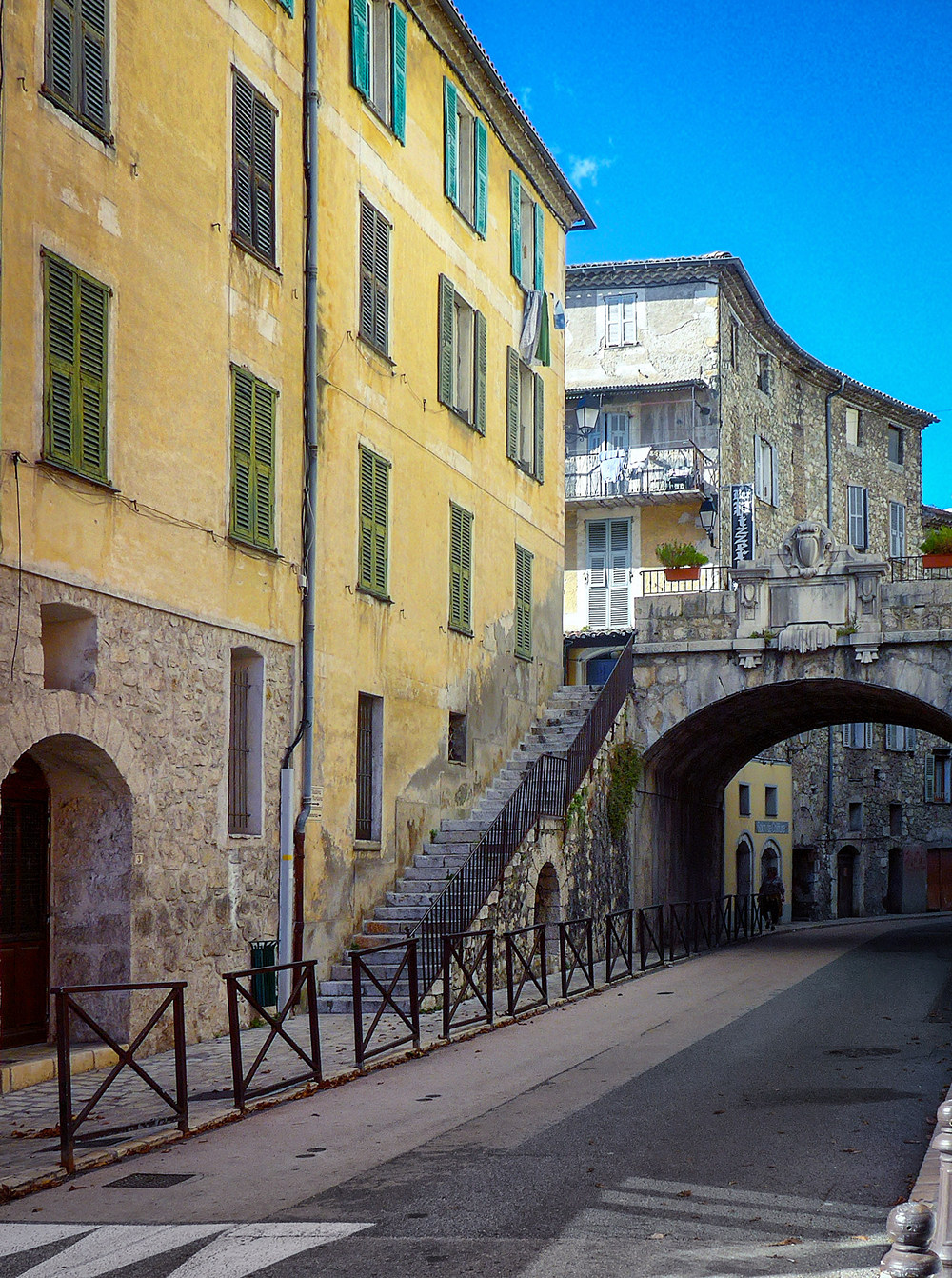 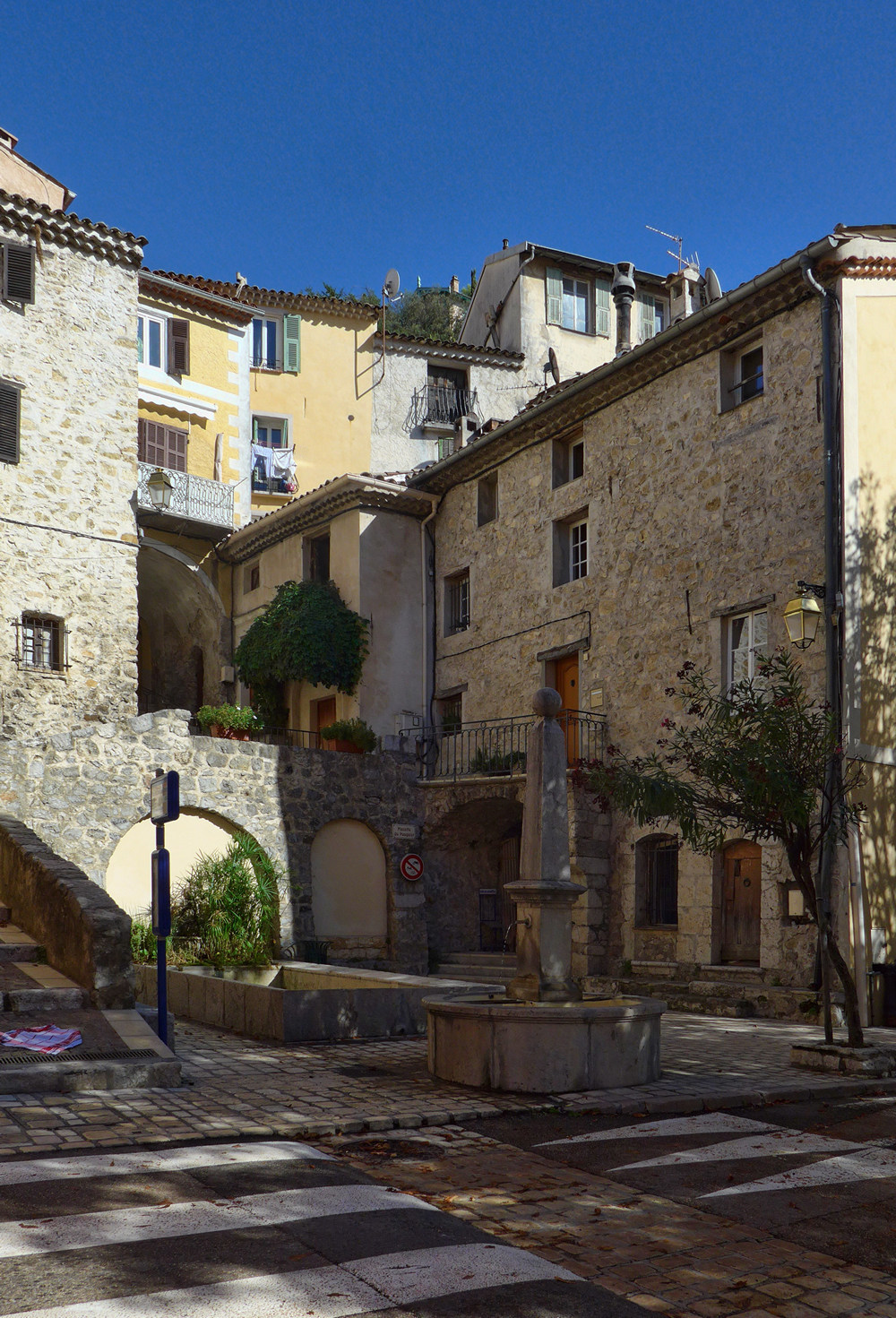 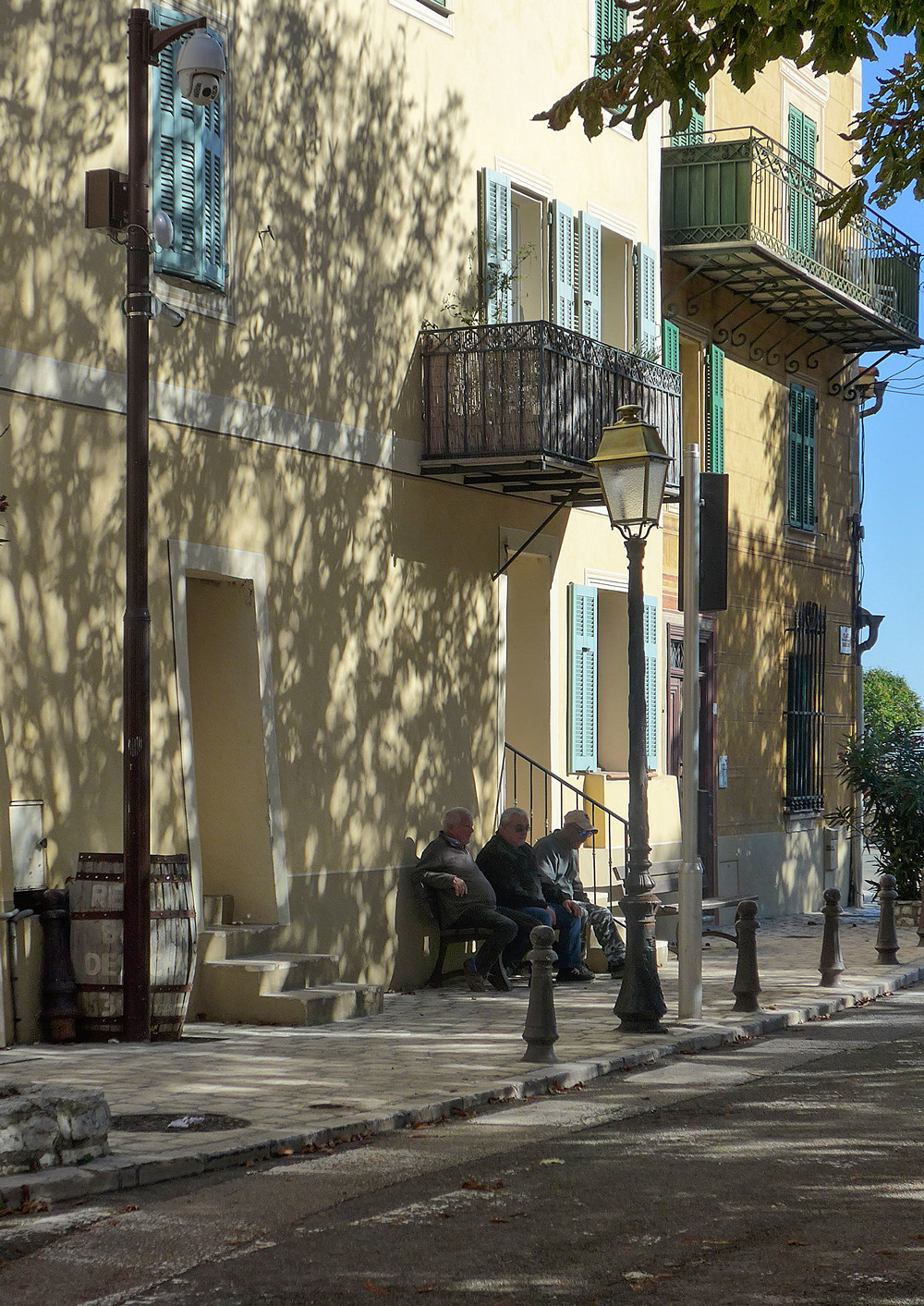 I’m sitting here by the war memorial in the baking sun. The temperature seems to have increased significantly since I came down from the hills, and also as I’m approaching the Mediterranean. I realised that river I saw earlier couldn’t have been the Var because that’s on the other (north) side of the hills that I’ve cycled along. I’ve got a better view of it now and it looks more like a canal – I’ll check when I get back – I did check later and I was right. The river I had seen earlier had been l’Esteron. But now it joined le Var.

I feel like I could sit here for an hour or so in the really hot sun, but a bit concerned that time is running out so I need to crack on.

There was a lovely descent after heading away from Gilette. 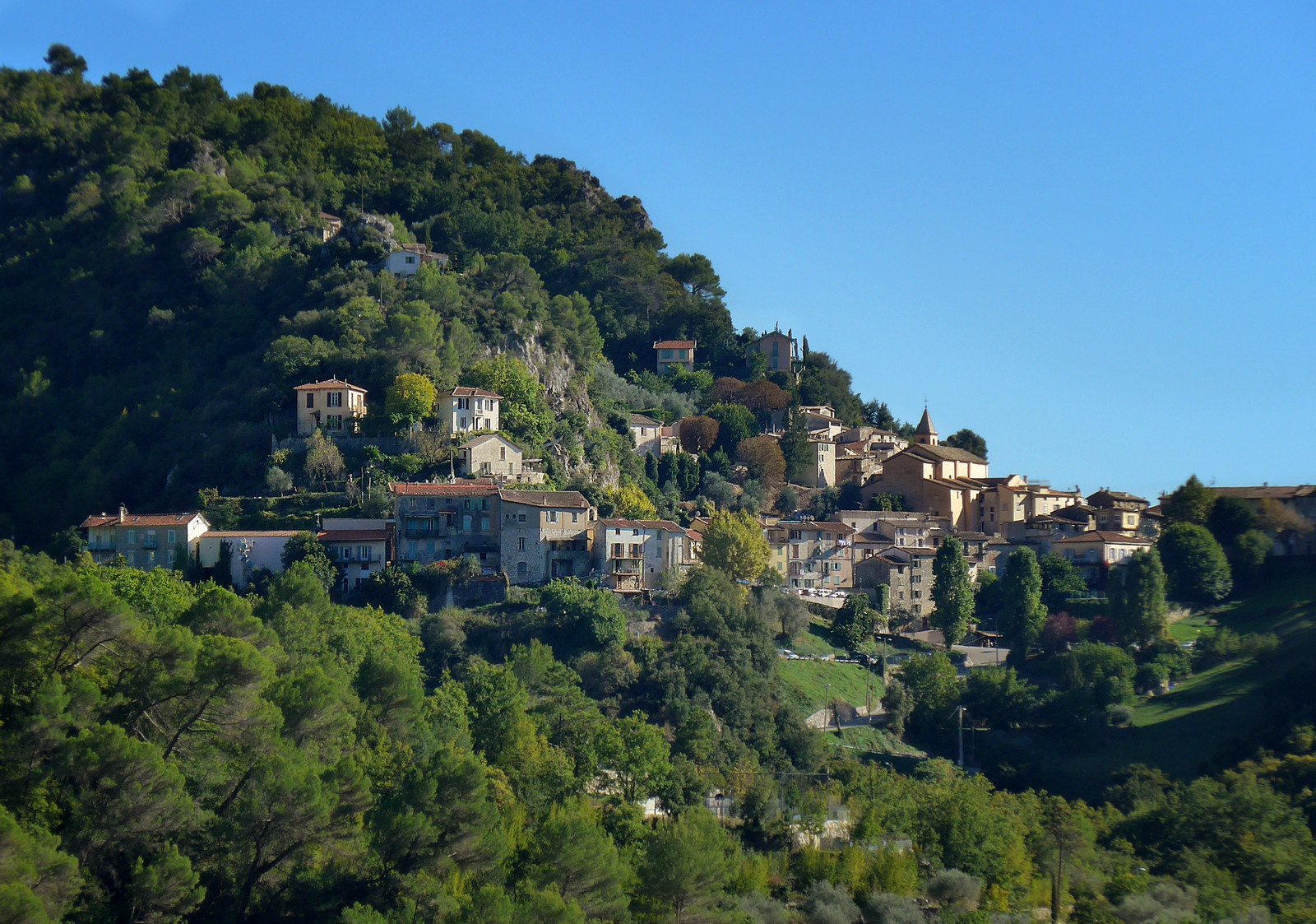 Then eight miles of mainly flat as the road followed the meanders of the Esteron river. 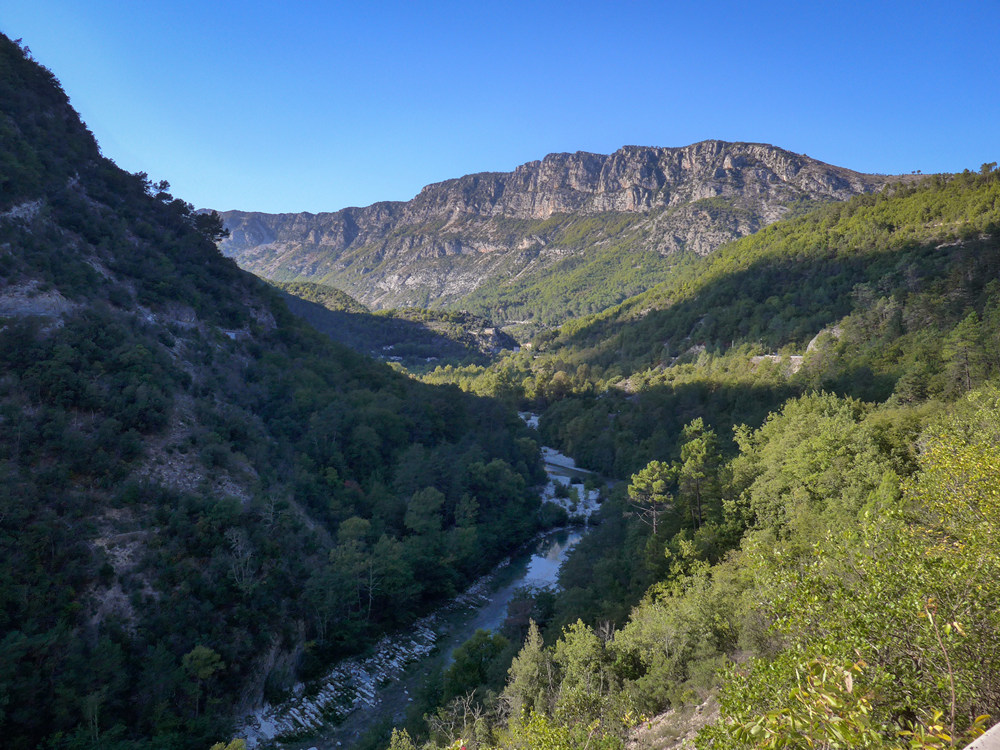 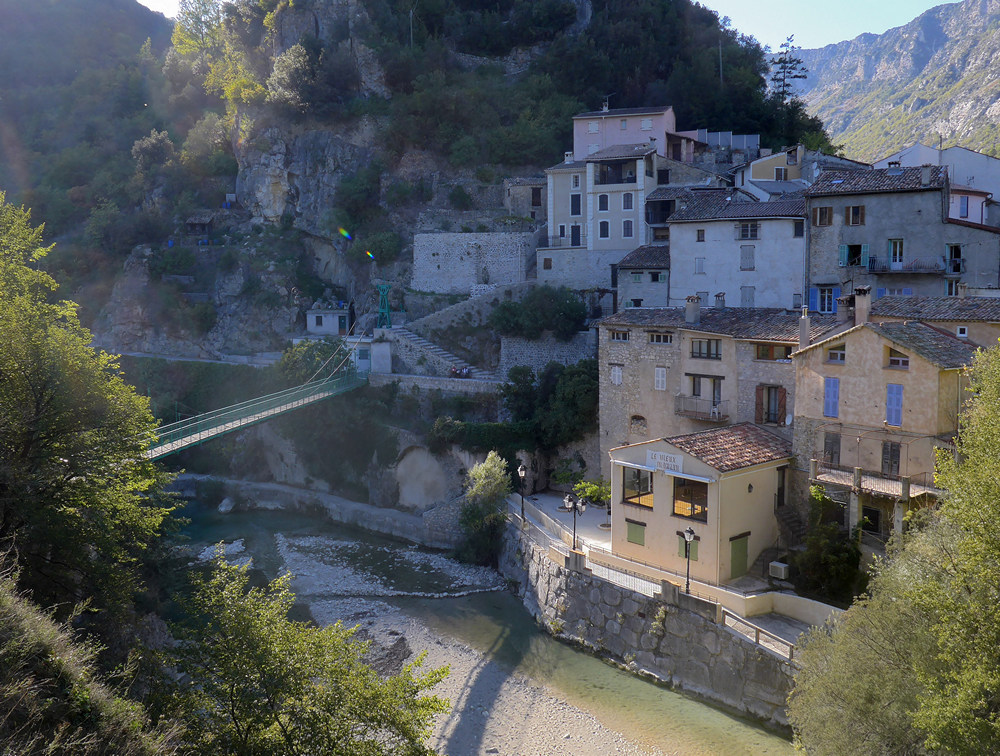 …which is right next to Roquestéron Even though these two villages are right next to each other, separated by the bridge, they each have their own mairie (town hall), probably because the river is the boundary between administrative regions (Nice and Grasse). The sun was on me nearly the whole way. The road from Sigale heading north was now following the Riolan river, a tributary of l’Esteron. At one point I glanced over and saw some ‘papillons’ on a bald part of the hill opposite 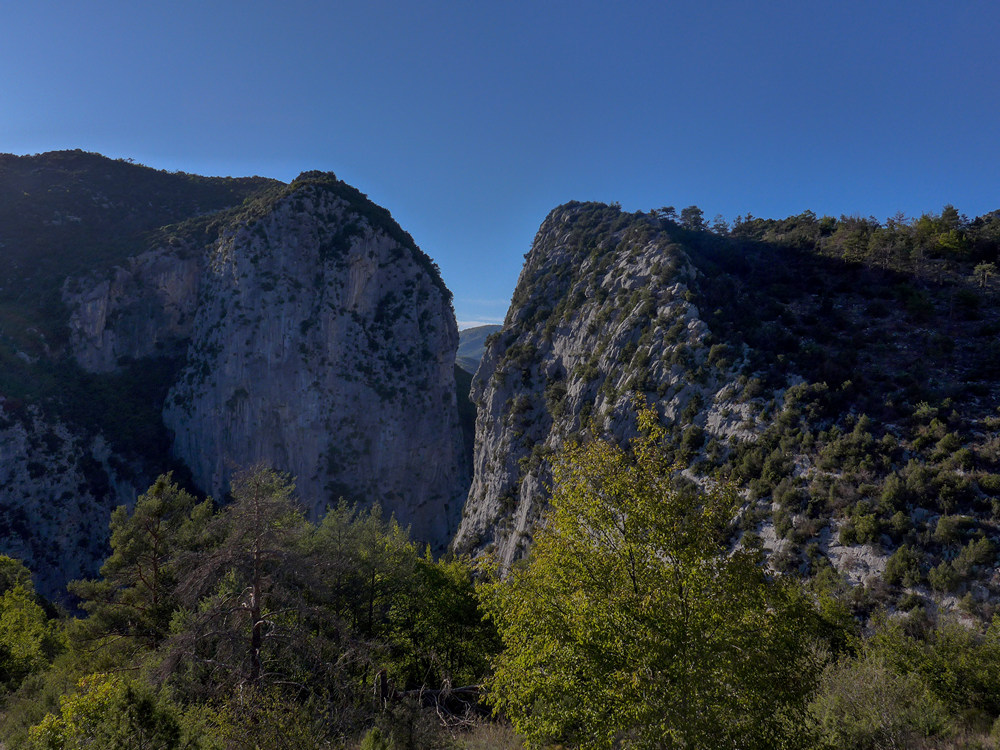 I think I let out an audible ‘yay!’ when I saw the balcony-style road ahead. 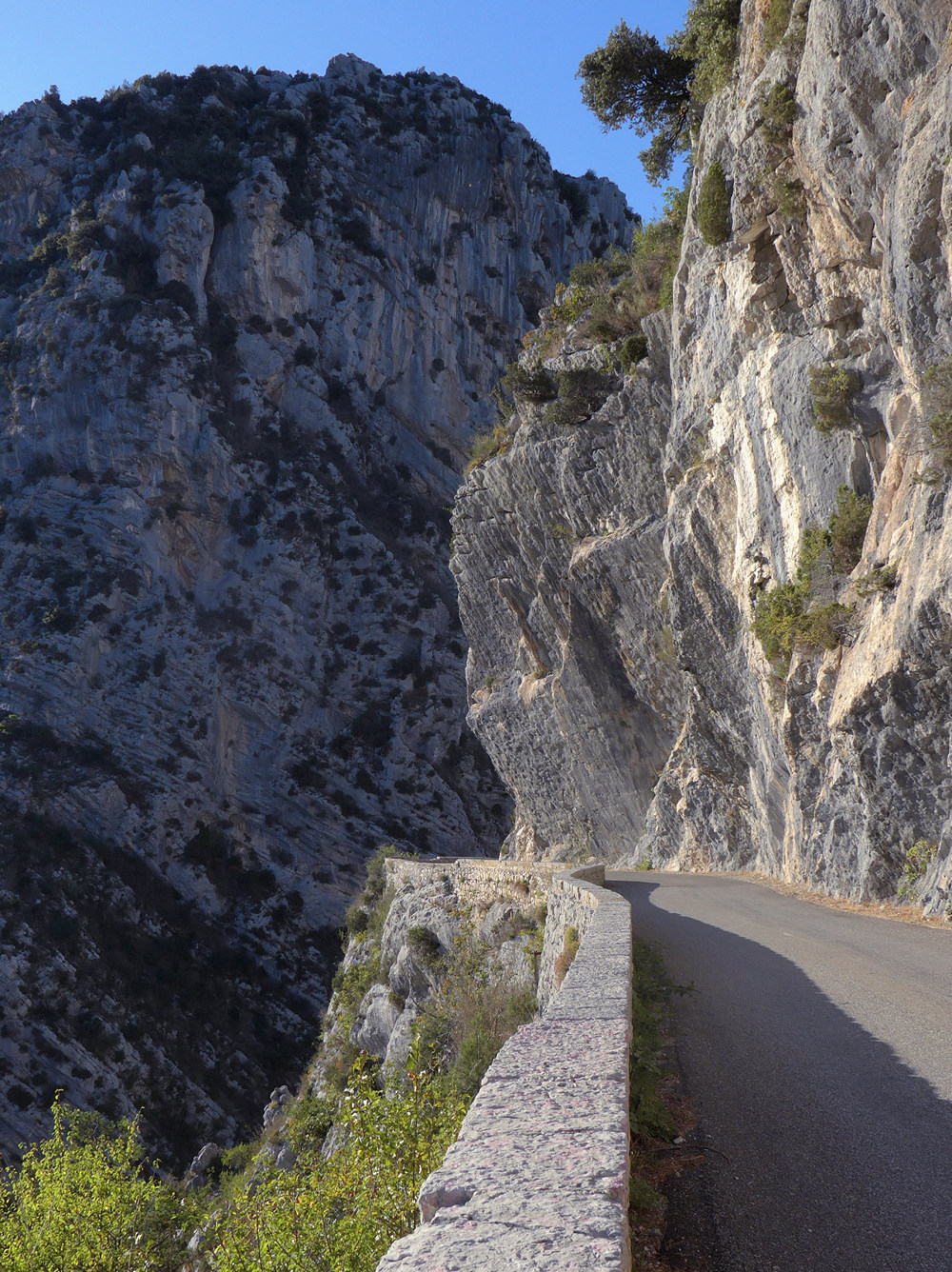 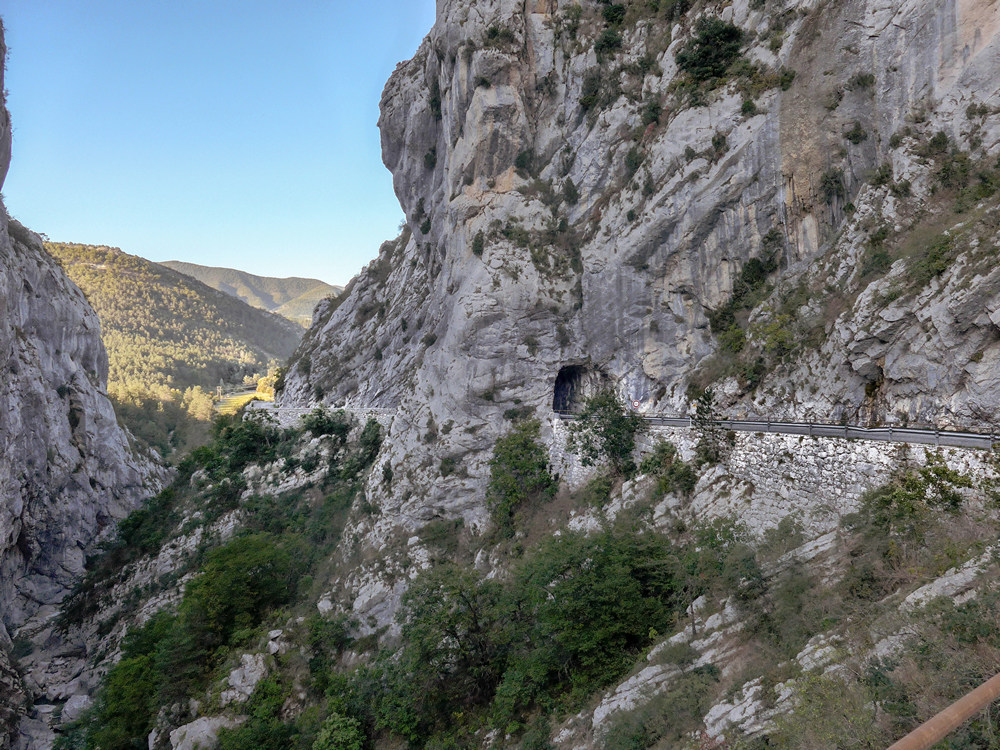 I had stumbled upon la Clue du Riolan. I later discovered that this spot is very popular for ‘canyoning‘

So that had been a nice surprise. Looking at the map later I discovered references in the area to ‘Pali’, so it could be called Pali Gap! 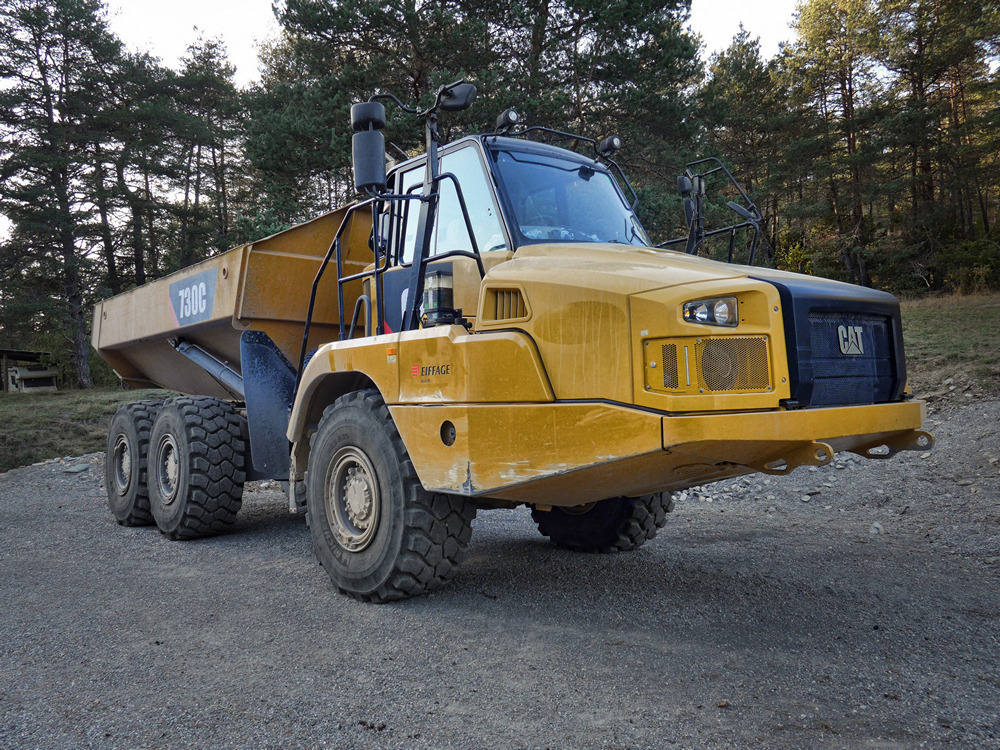 After that, I started recognising places I’d been through in the opposite direction on previous rides

Then the road started climbing. High up on the hills in front of me I could see the road that I’d been on earlier, coming through Ascros, as it clung to the rock-face. Because of the late hour, I eventually lost the sun behind the hills, but it still wasn’t that cold. I knew that the col de Saint Raphael was coming up, but because I’d never approached it from this direction, I didn’t know how far I had to go.

It was one of those times when I kept thinking I was nearly there, only to be disappointed round the next bend. Eventually though I saw the armco of the road above me and knew then that it was round the next bend. When I reached the col de Saint-Raphael, I didn’t stop to put arm warmers on. I just continued straight over the top and into the five-mile descent back to base. I really enjoyed myself on that descent, except for small sections of gravel. I got back feeling elated. That was another brilliant ride.