After yesterday’s two prematurely foreshortened rides, I’d planned an epic 70-miler today to make up for it. I left at 11:20. Here’s how it went:

Here I am at my old friend col de St-Raphaël again. 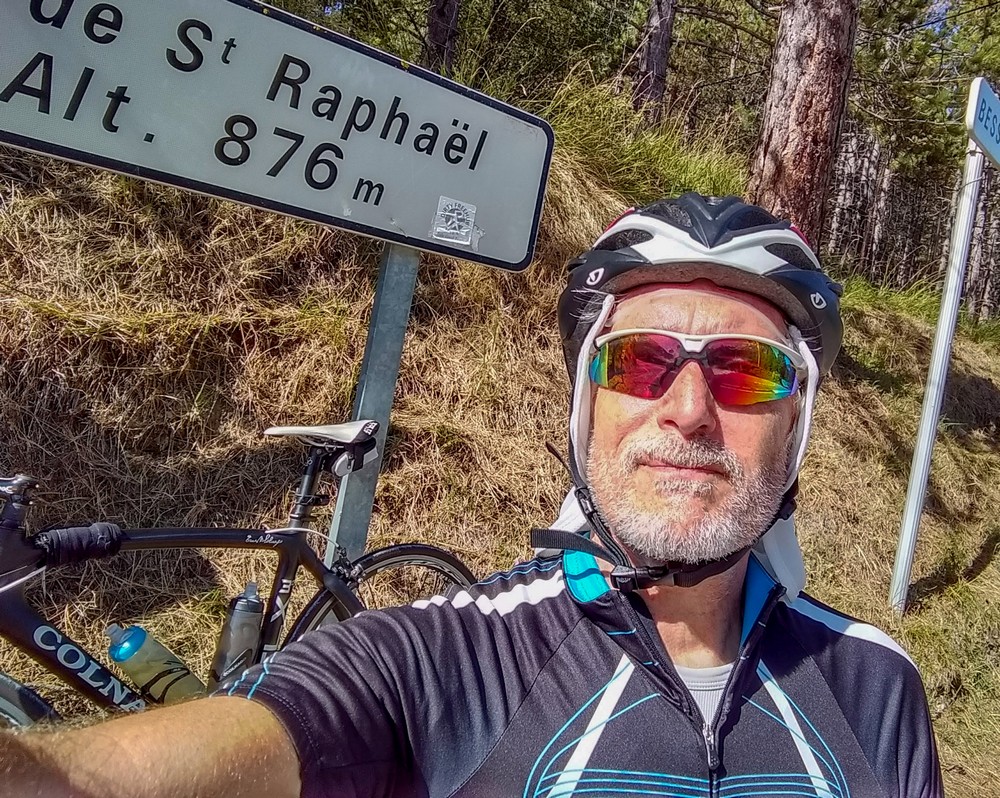 This time I came straight up the climb, without even looking at the scenery really. It’s a beautiful sunny day. When I reached the point where there had been roadwork traffic lights a few days ago I was pleased to see they were not there anymore. I was trying to do the climb in one go. But around another couple of switchbacks was another set of traffic lights on countdown – I think I got to it when it was on about 5, which I think means about two-and-a-half minutes I’ll check when I get back (the temporary traffic lights in France have a countdown timer – a brilliant idea, especially for roadworks on back roads, where sometimes you wonder if the lights are even working).

Earlier on that climb, I saw what must have been 20 to 30, in dribs and drabs, road maintenance vehicles of various sorts coming down the hill. I treated that as a good sign because I can only assume that they’ve finished whatever they were doing.

So this time is different to the other two rides and I’m taking the left fork here and carrying on climbing for the next 4½ miles, I think. so that will be new territory and therefore may be some new photos.

I’m now at the 10½ mile mark, just the other side of Ascros, which is the highest point of this ride. It was a fairly gentle climb since the last report. At one point I was amazed to see new recycling bins being fitted in just a small hamlet…

and then, lo and behold, there was another set just up the road .. 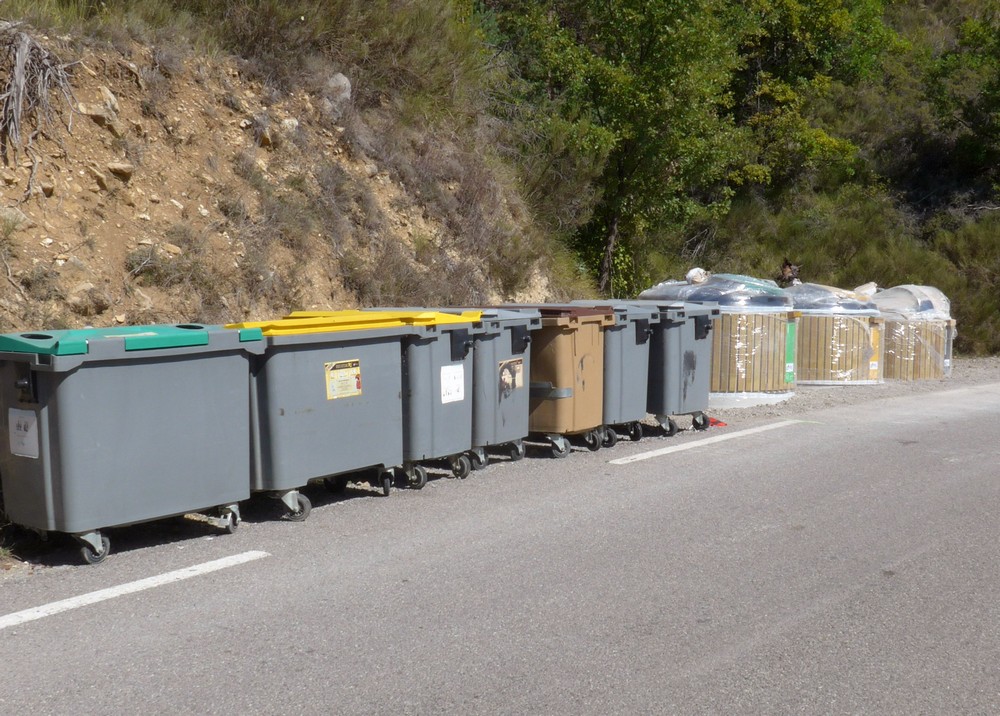 … and surprise surprise another lot! 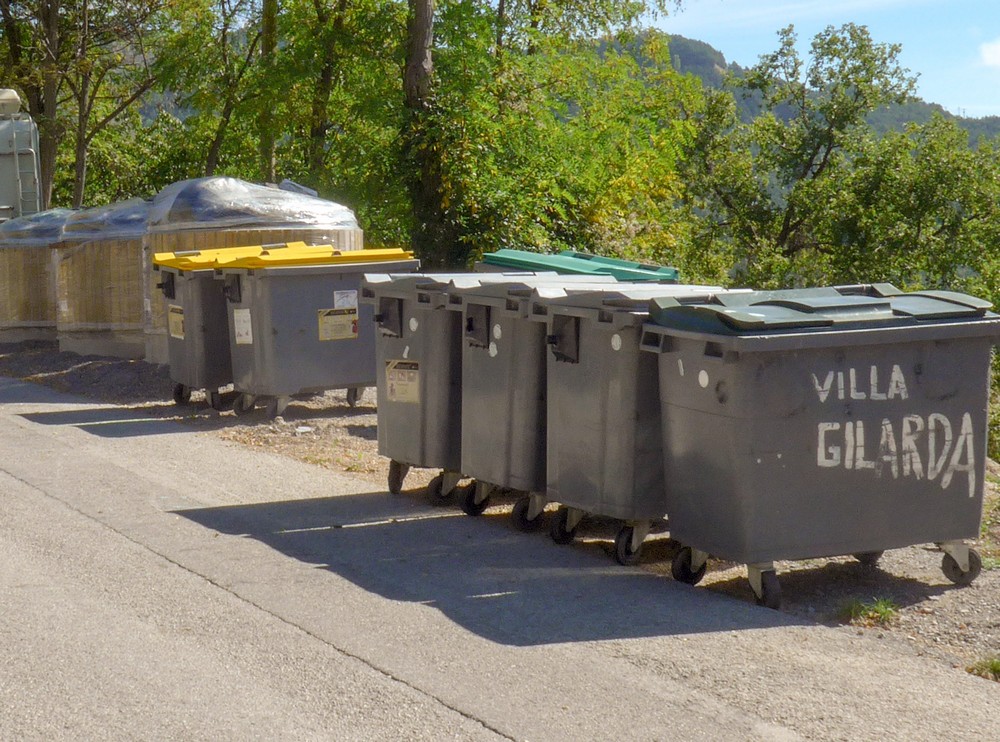 All three sets were within possibly a 1km stretch of road! They certainly believe in recycling out here! Just after the bins I passed through the small village of Rourebel. 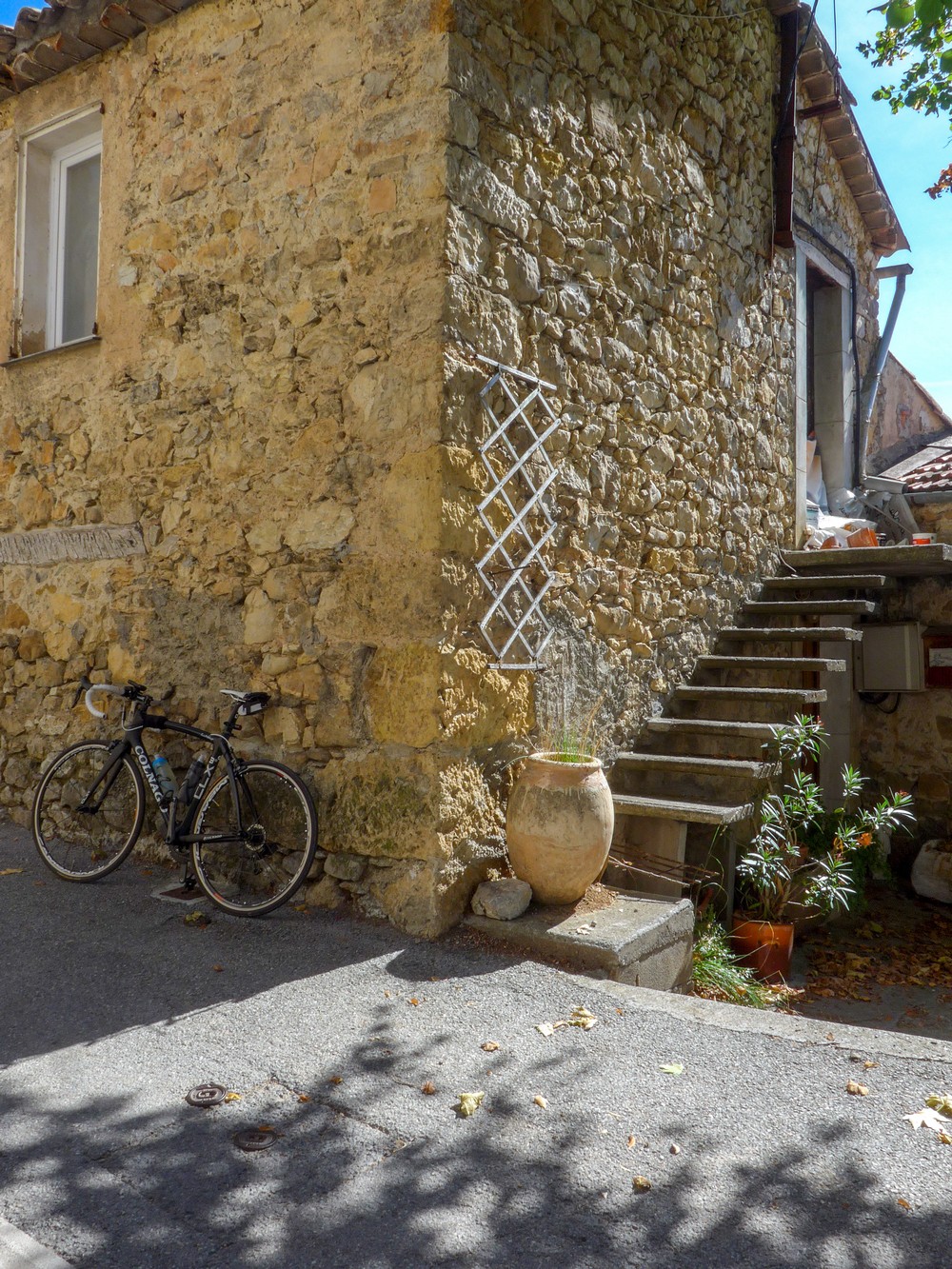 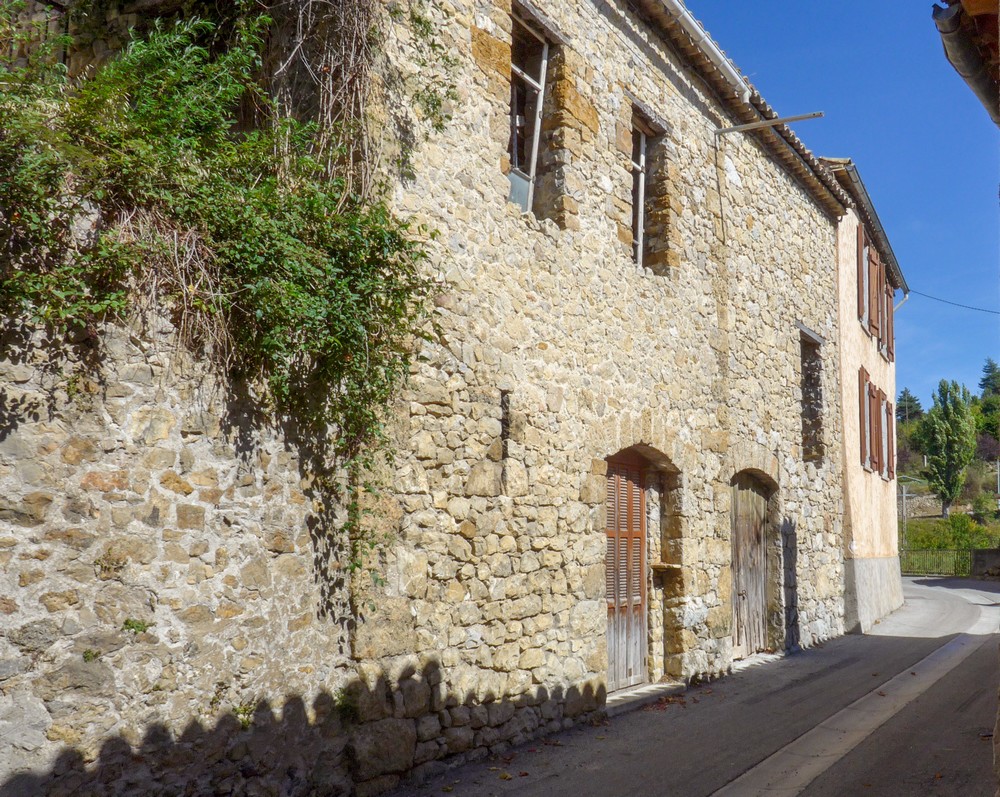 Then I eventually reached Ascros 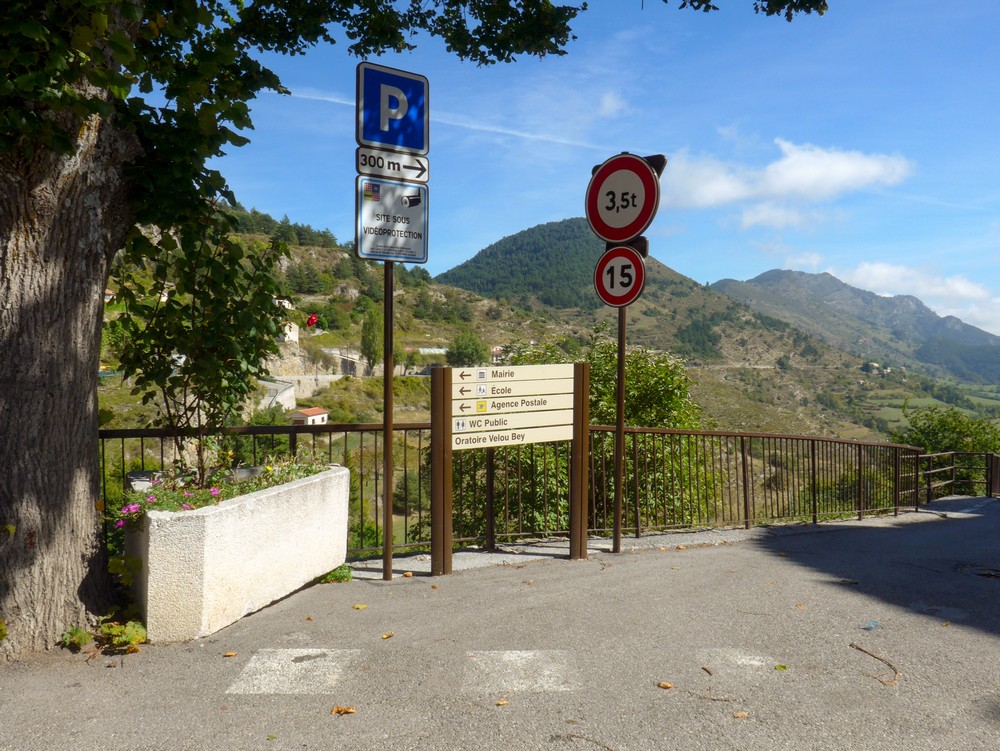 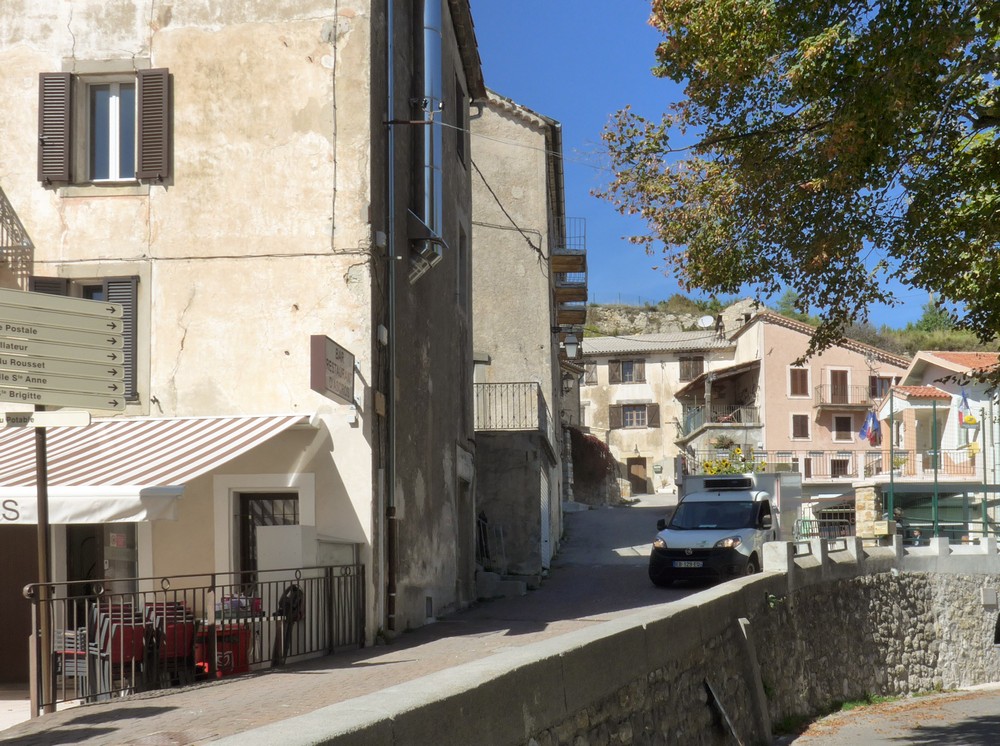 Ascros is a large village, I suppose you would call it. There’s the sound of school children playing and as I got here, right on cue, the church bell struck one, and then one again about minute later as they do. 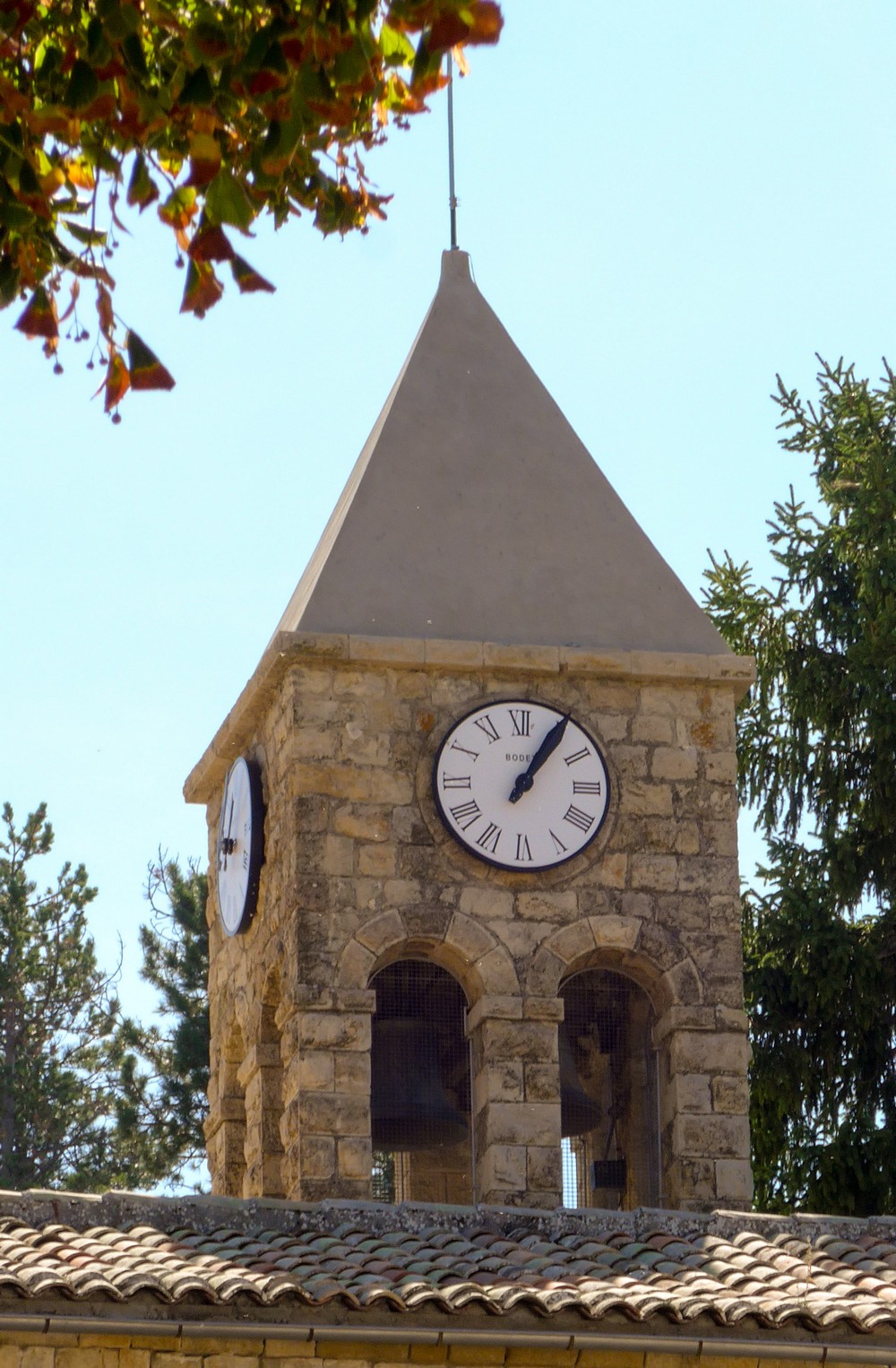 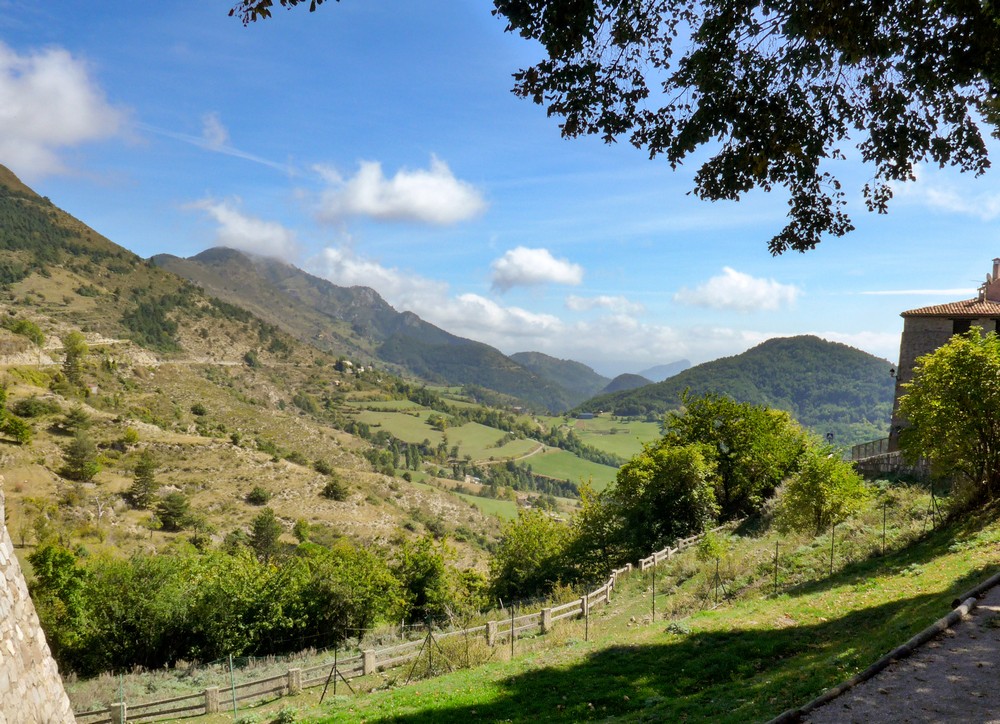 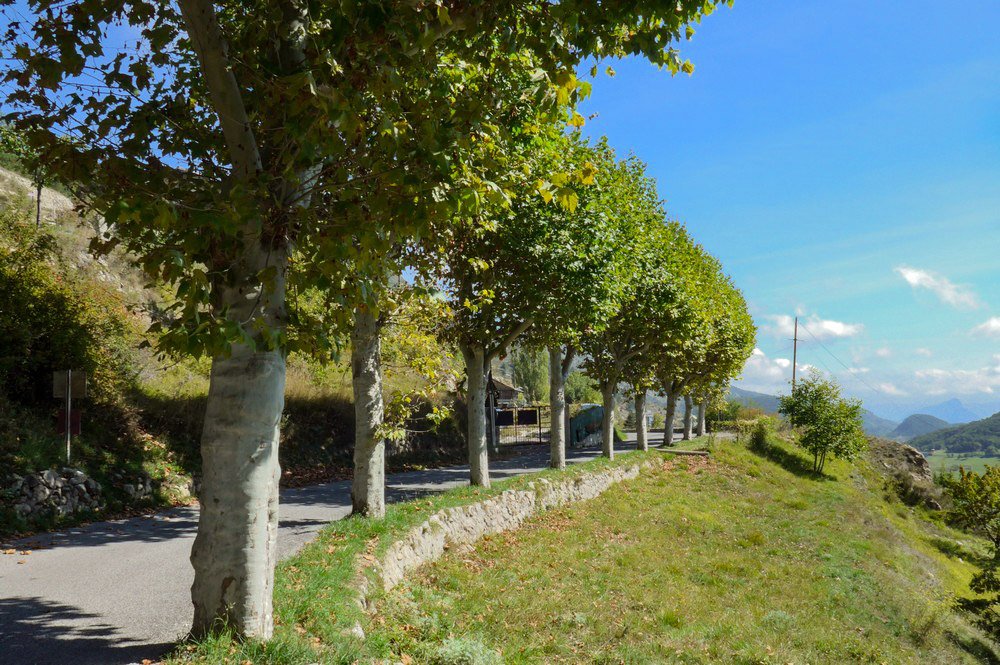 Ok I’m recording this report back at the van. After the last one, the road slowly descended but it was looking cloudier in the distance in the direction I was going. 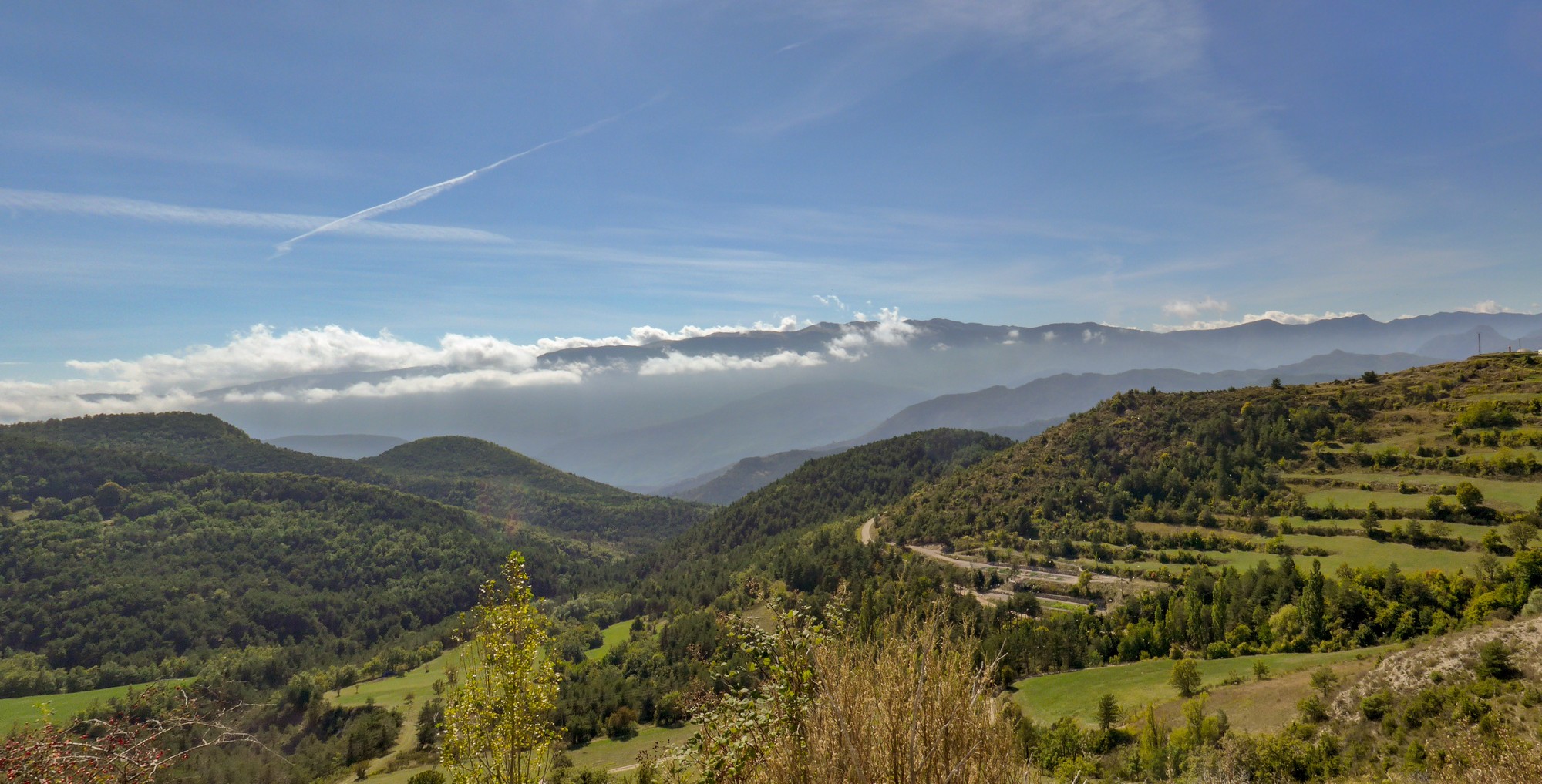 and I kept wondering about the time I’d be getting back from a 70 mile-ride in this terrain. Needless to say I saw even more recycle bins on that bit of the journey. The road was spectacular really, clinging to the edge of the hillside. 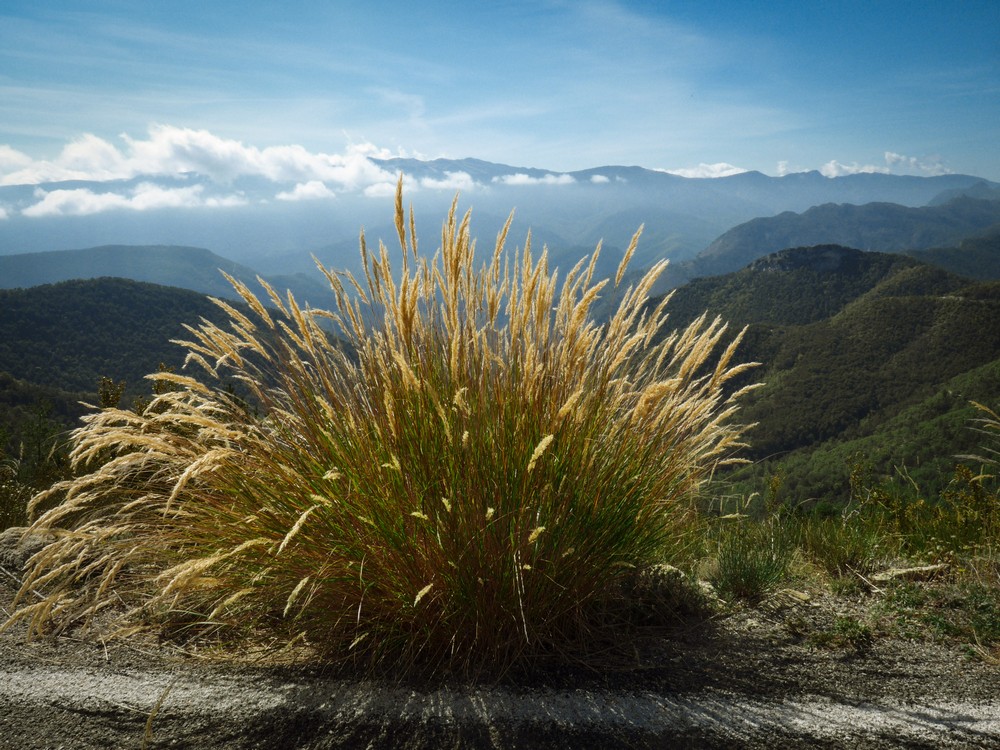 I started wondering how much of an effect the sheer drop to my right was having on me. It’s certainly a mental strain knowing that almost certain death is little more than an arm’s length away.

Everywhere I’ve been cycling in France there have been nets and things to stop the rocks falling on the road, but never have I seen as many rocks and stones on the road as I did in that section after Ascros. I’ve still yet to see or hear anything in terms of rockfall happening ‘live’ in front of me. In one case a huge boulder the size of a house had rolled down next to the road and they’d built a sort of rustic looking wall underneath it to stop it moving any further so now it’s become a feature. But it just feels like the mountains are crumbling incessantly around us.

I reached another small village, Toudon 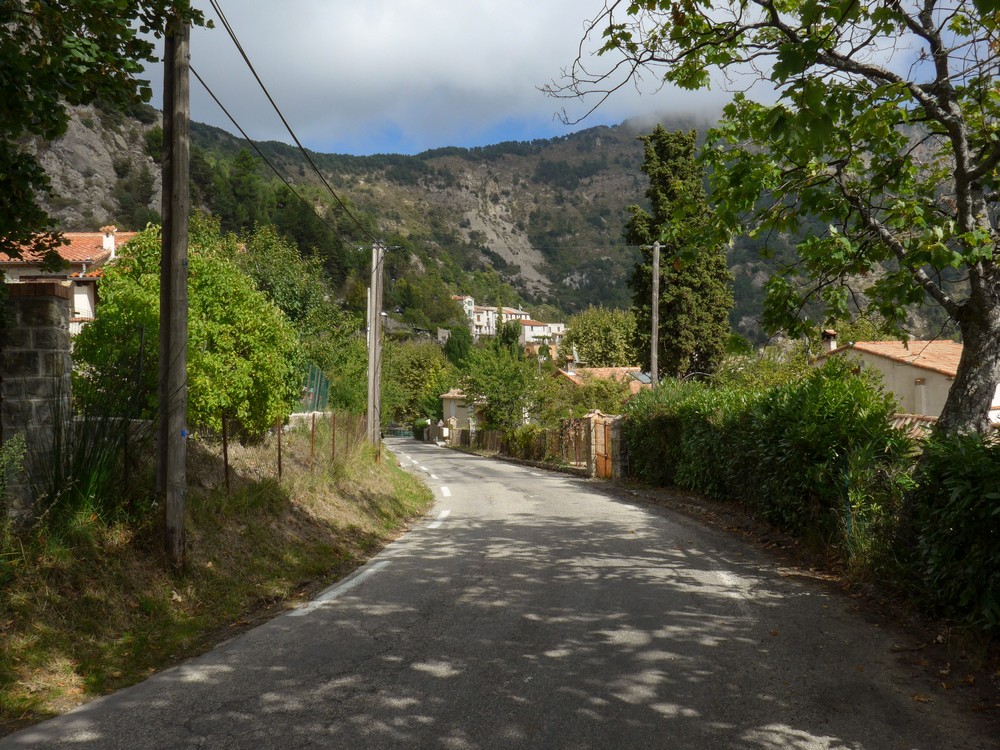 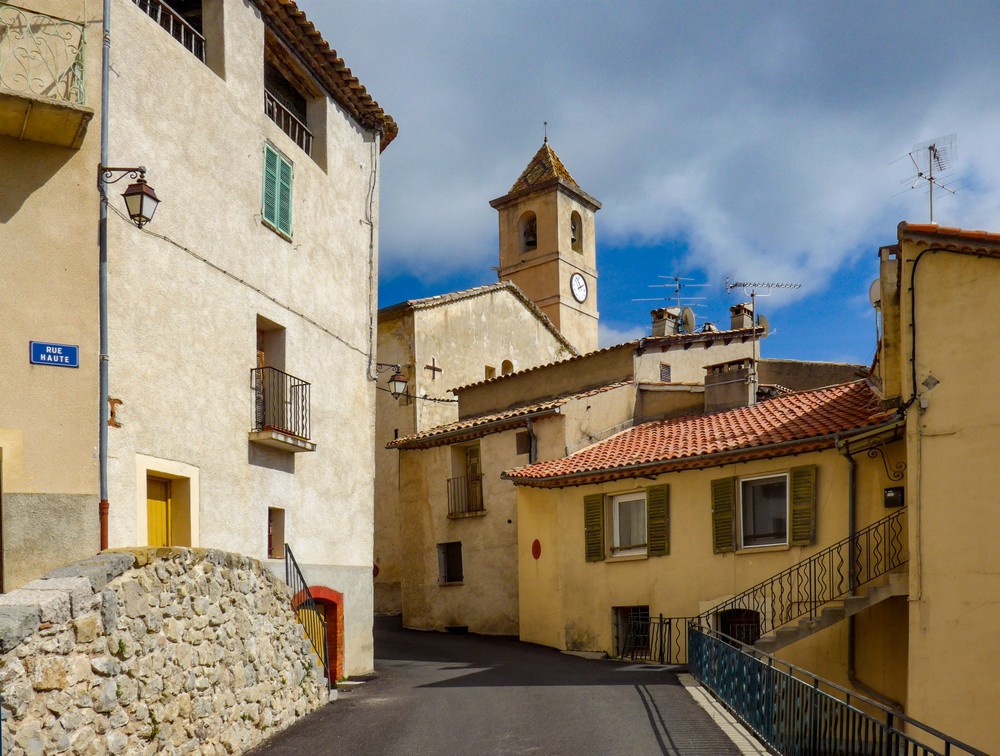 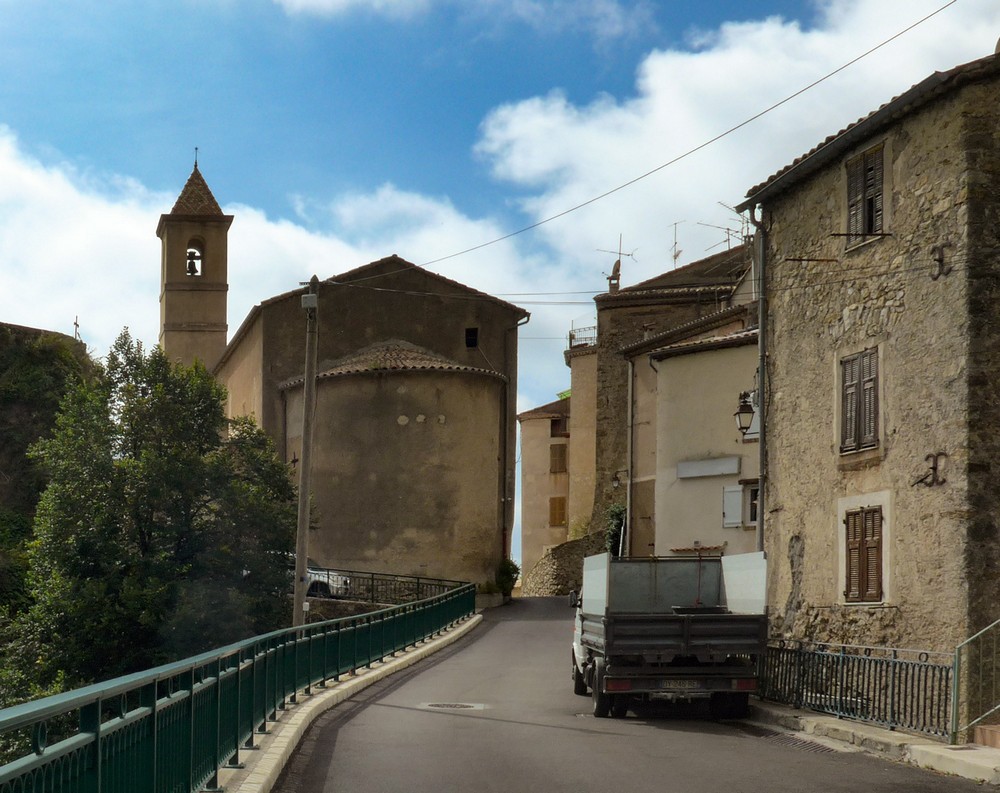 The bad news was that, just after Toudon, my Garmin beeped and I wondered what that was all about. When I looked down, it warned of low battery. I thought noooo! There was no way it was going to last much longer, let alone a 70-mile ride, so I turned around and started back almost immediately. I tried to get a good pace because I was hoping the Garmin might last all the way back, even though I knew it really wouldn’t. I climbed back up to Ascros and I think it died a couple of k after that, so I stopped pushing so hard after that because I knew I wouldn’t make it back with the whole trip recorded on the Garmin. I noticed on the way back, now that I was on the other side of the road, away from the drop that I felt more comfortable. 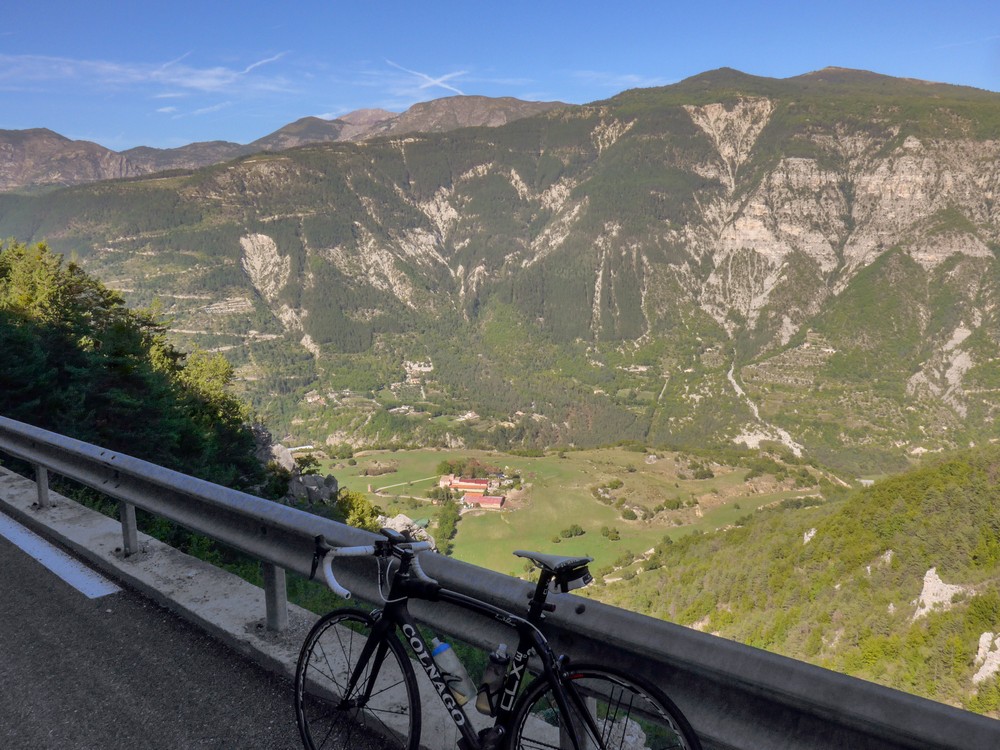 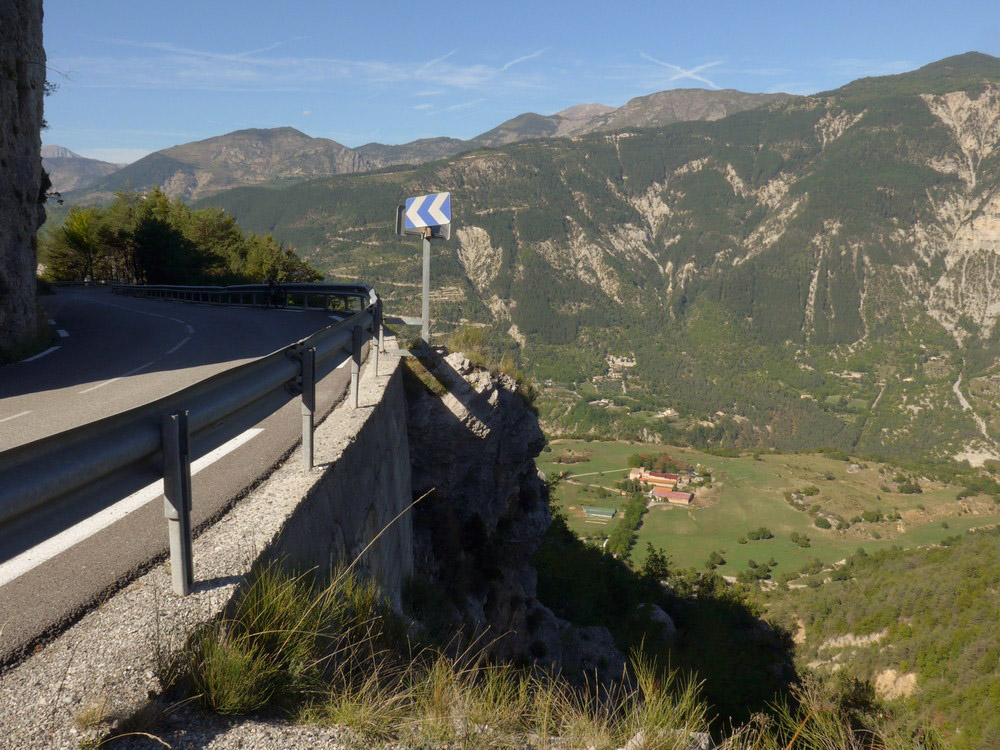 The descent from Ascros had some very good bits on but at one point I hit a gravel section at over 20 miles an hour. That was very hairy because I had to try to slow down as gently as I could. luckily there was no traffic and it was a straight piece of road. It was a section where the road was being resurfaced so there was gravel for about half a k. After that it was back onto normal tarmac and a lovely descent back.

And as I was coming back, all the clouds disappeared and I was back in a cloudless, sunny place.

There was something about that ride I wasn’t quite happy with. There was the worry over the distance. The cloudy skies. The guy in Ascros who ignored my ‘Bonjour’. Anyway, there was an underlying feeling of it not being a Dry Blackthorn day. So, in retrospect I’m glad my Garmin gave up the ghost. Fate came to my rescue.