I parked at Entrevaux station car park and left for the ride at 12:15. 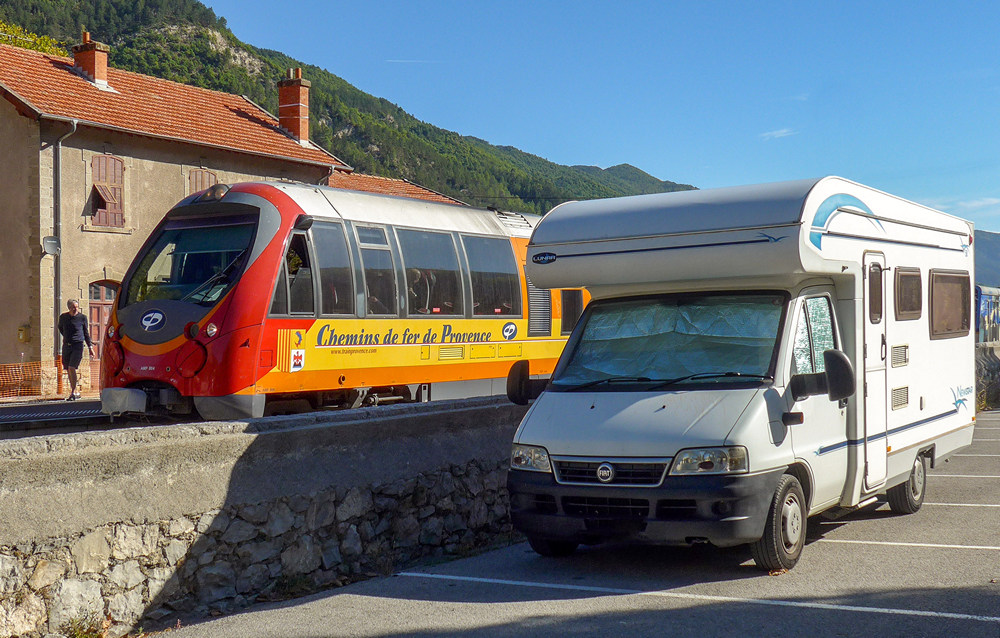 As usual I did reports at various points of the ride:

First report coming at 10.5 miles. It’s a sunny day but not that warm. I have my arm warmers and my rain jacket strapped to my bike. I have been warm enough on the journey so far without putting my arm warmers on. The good news is that this road has hardly any traffic on it. I was worried with it being Saturday that it would be busier. The road so far has followed the river.

I can see the red rocks of the gorge ahead of me. 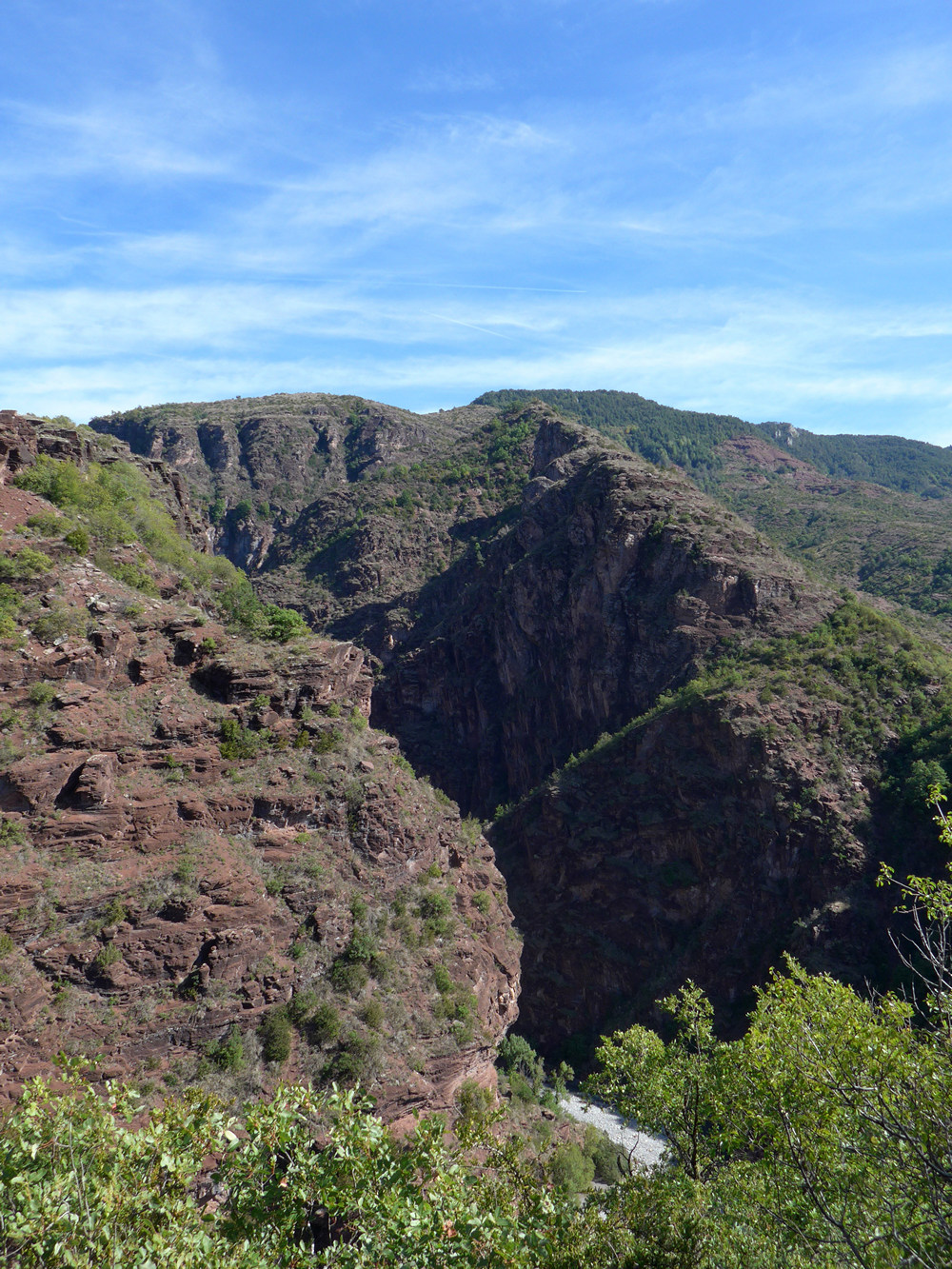 The road has been climbing quite steeply as I approach the gorge and it looked steep ahead but then I realised that the road swings a long way to the left before it comes back up the road I can see on the hill ahead of me.

Well for someone who likes gorges, tunnels and bridges, this ride is brilliant! The thing is, I’m stopping so often for photos that it’s getting a bit frustrating, because I’ve totally warmed down now from my earlier ride. Every time I get back on my bike and go round the corner there’s another stunning view. I’ve actually passed lots of breathtaking views and thought there’s no way that could be captured in perspective in a two-dimensional photograph, so I’ve just continued riding. Really there is no way of capturing the full scale of this thing without being here. Here are some photos though: 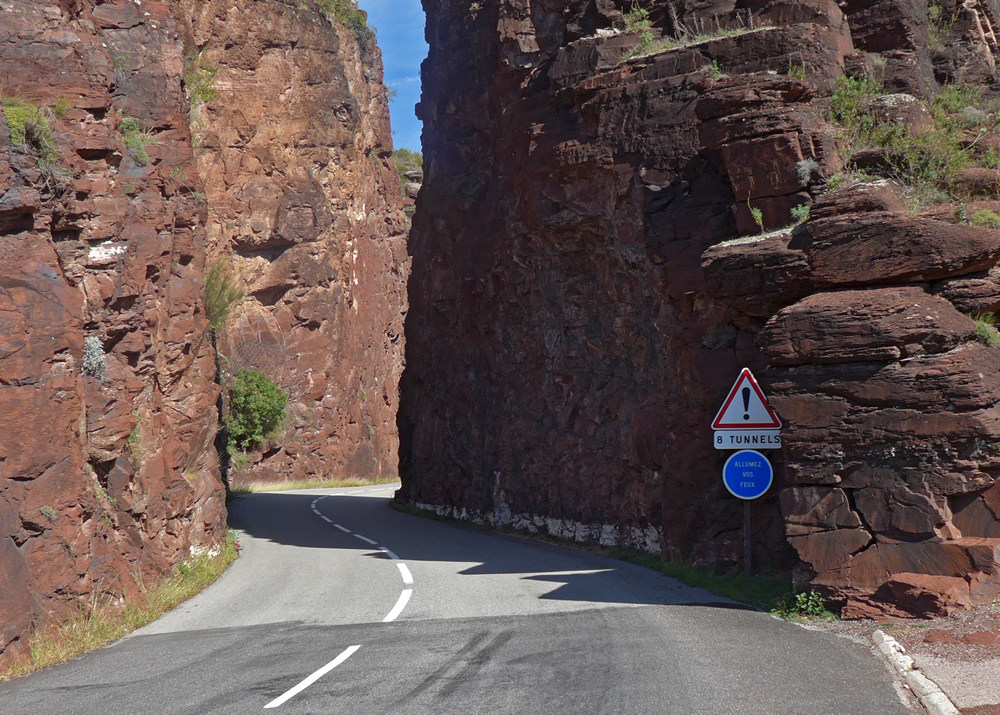 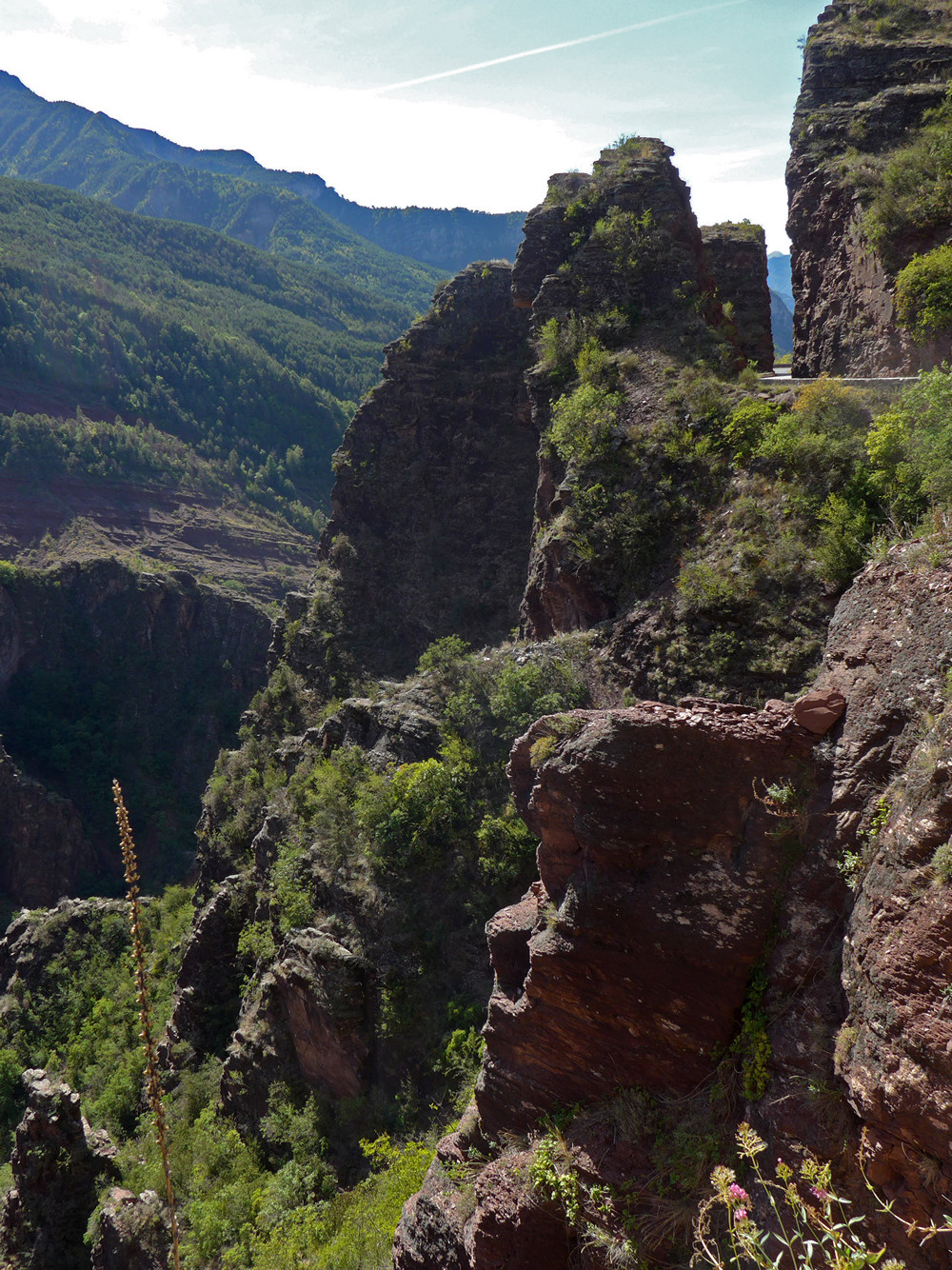 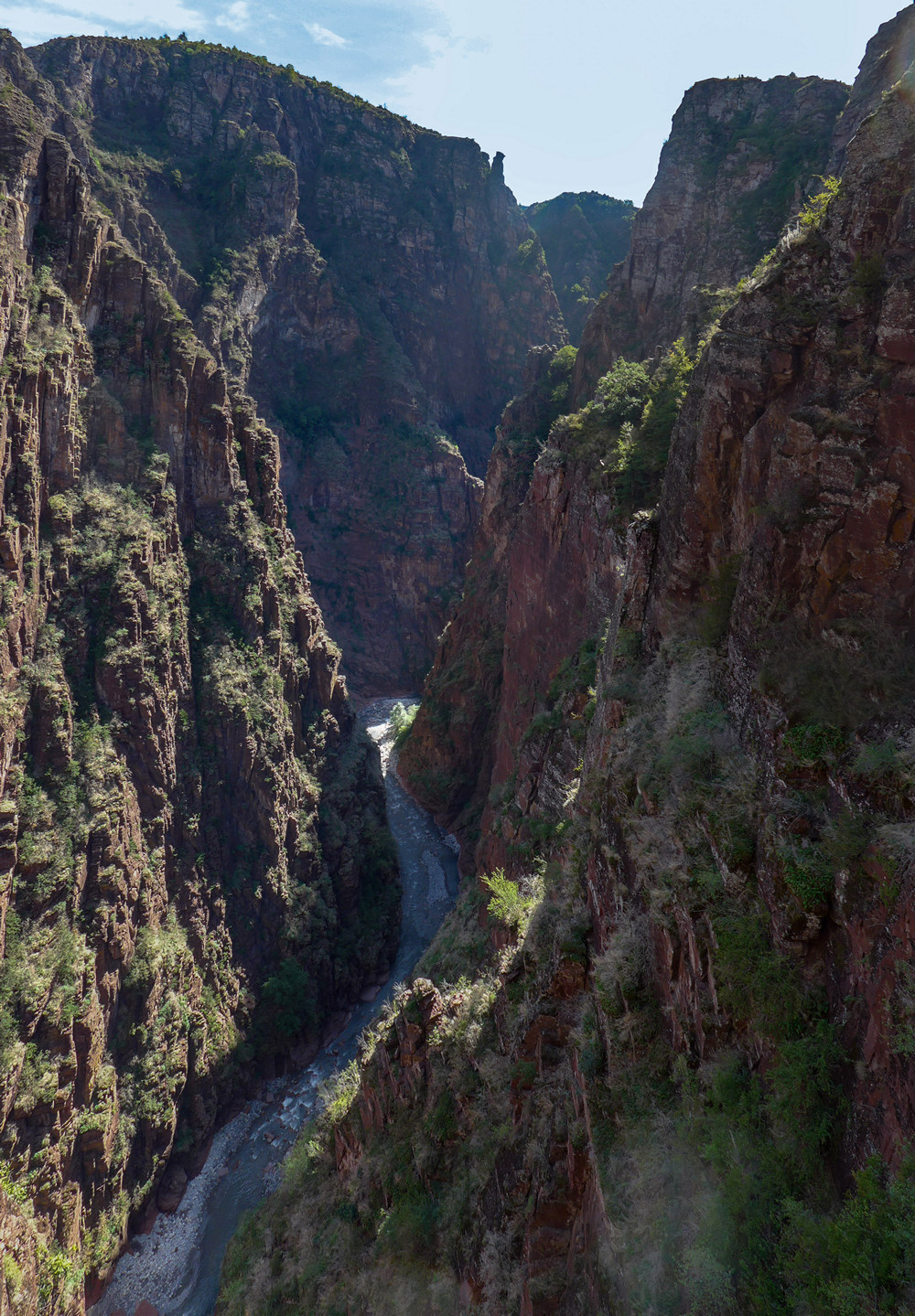 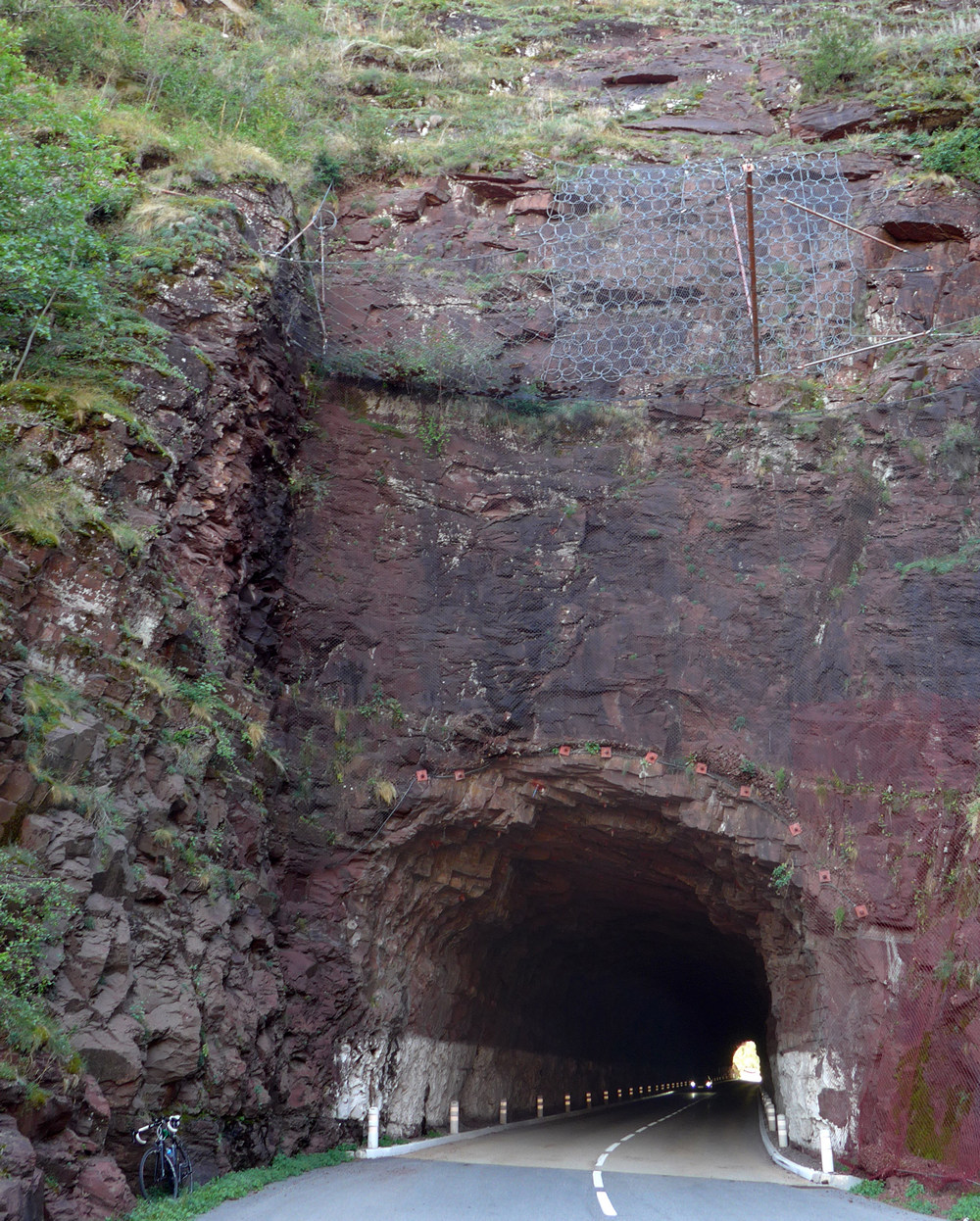 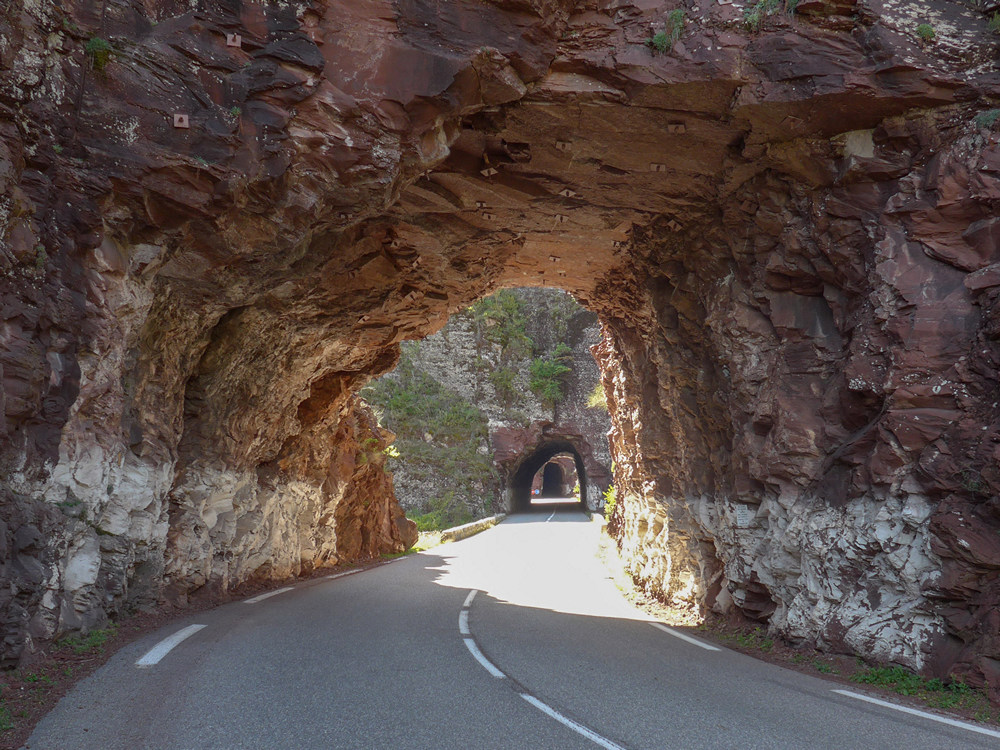 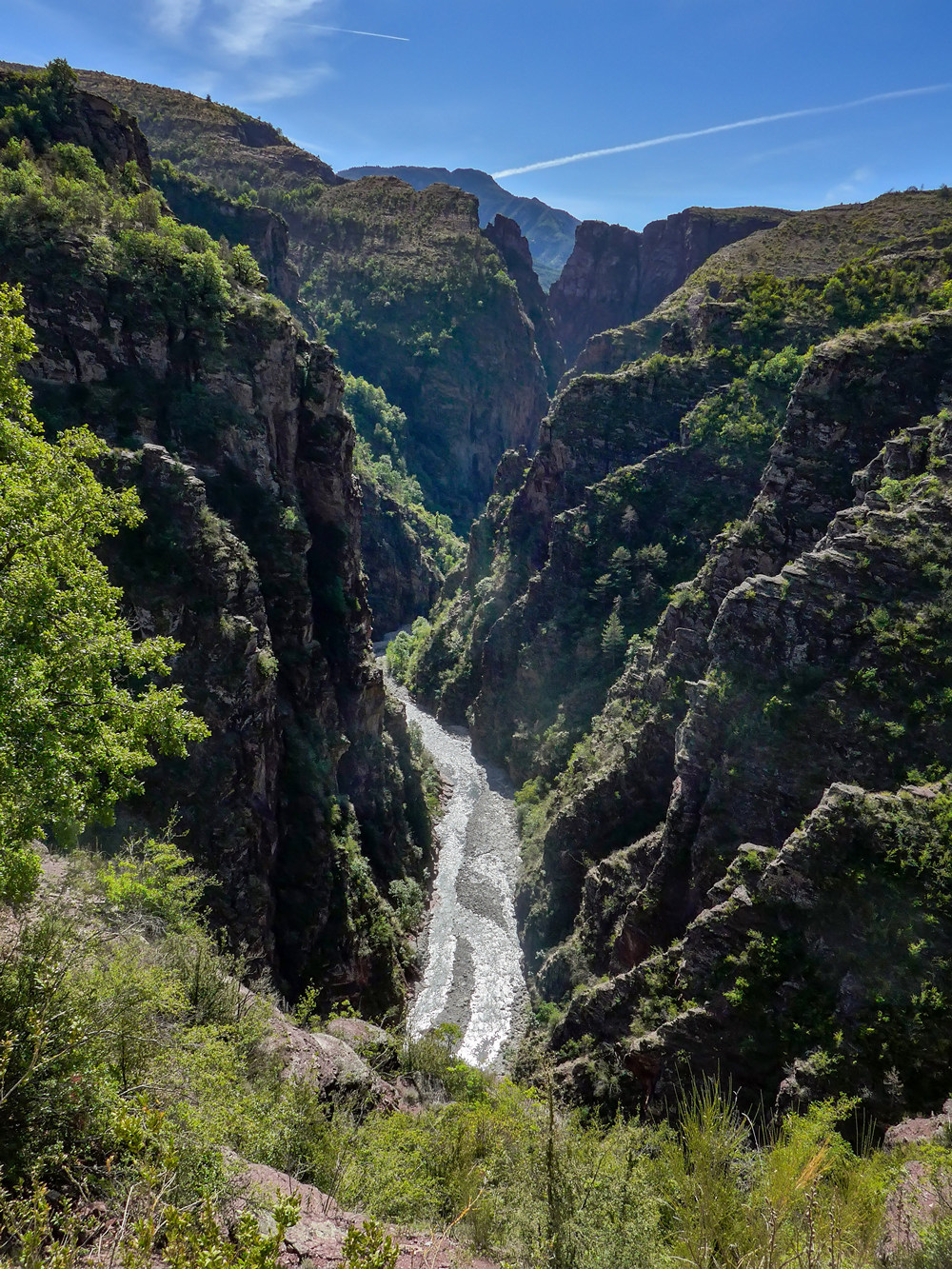 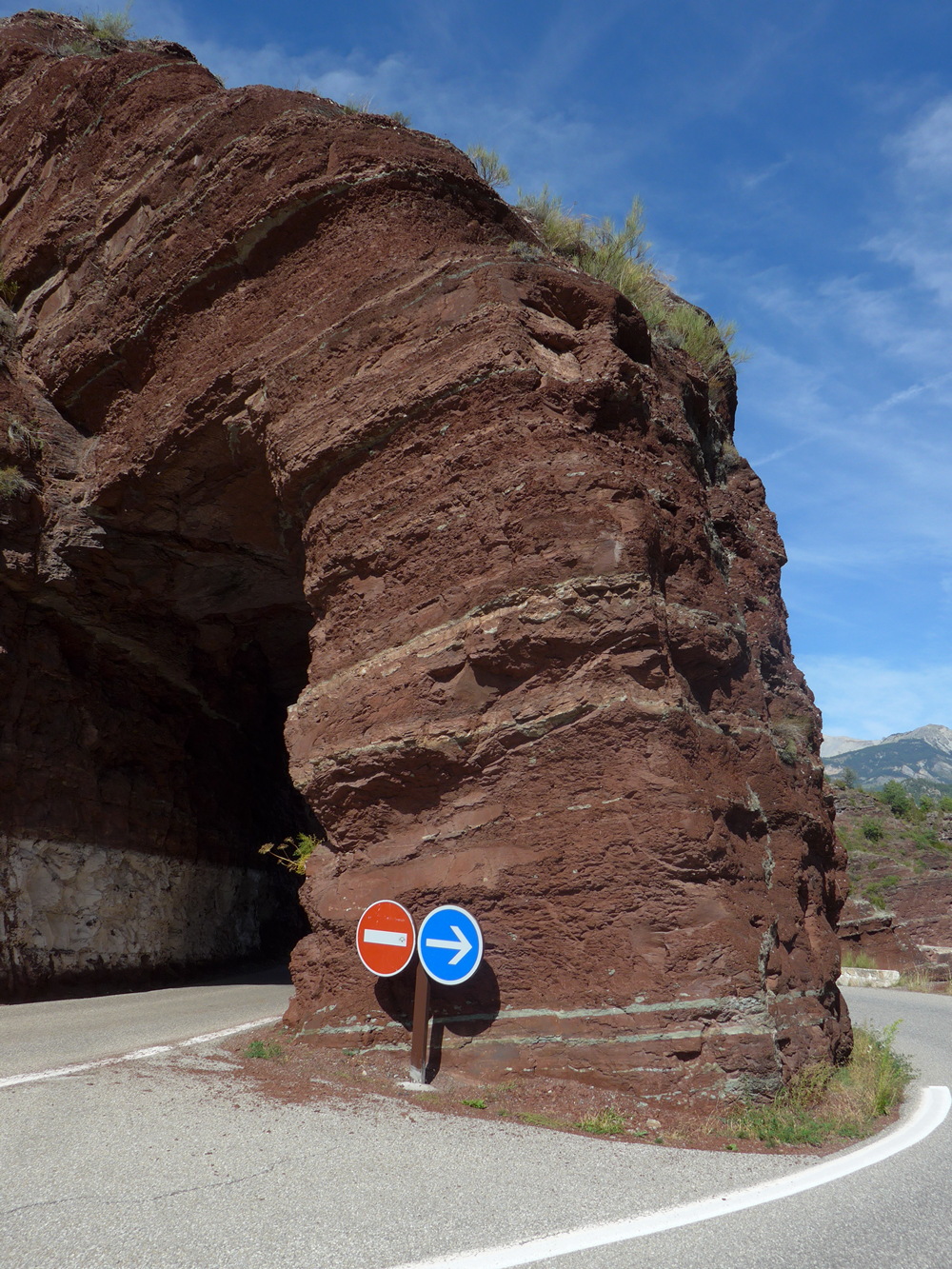 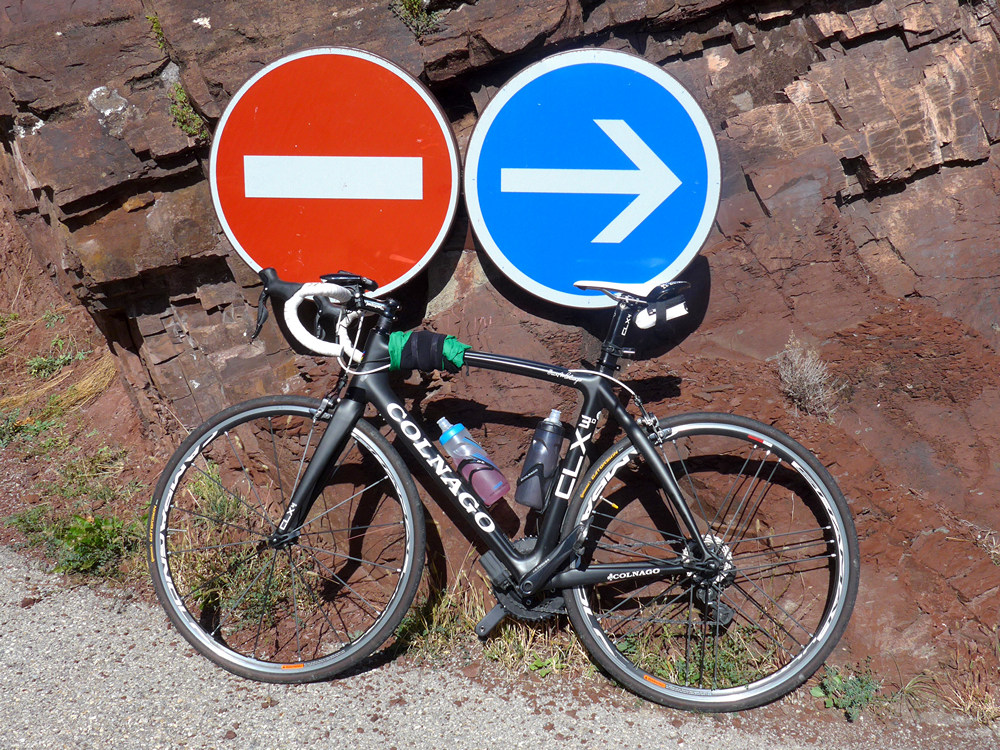 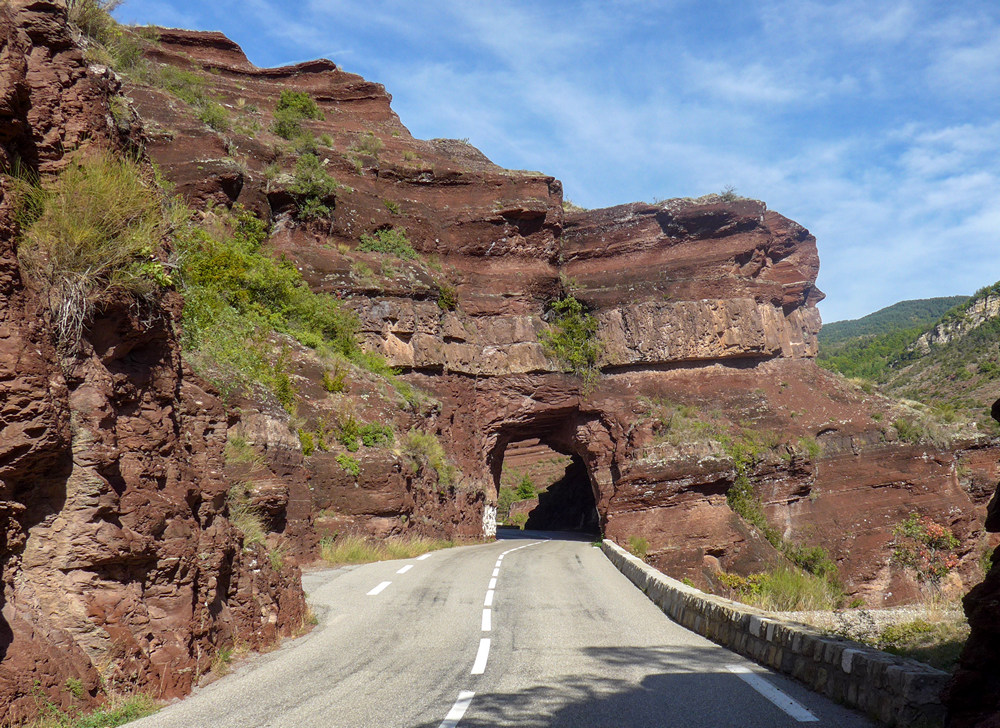 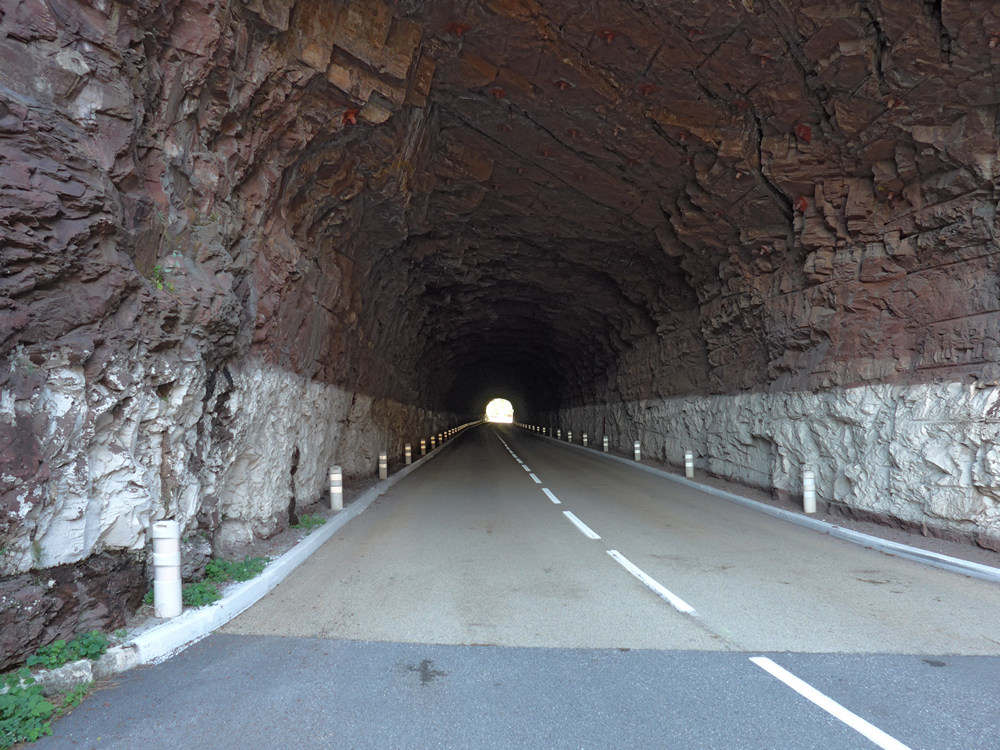 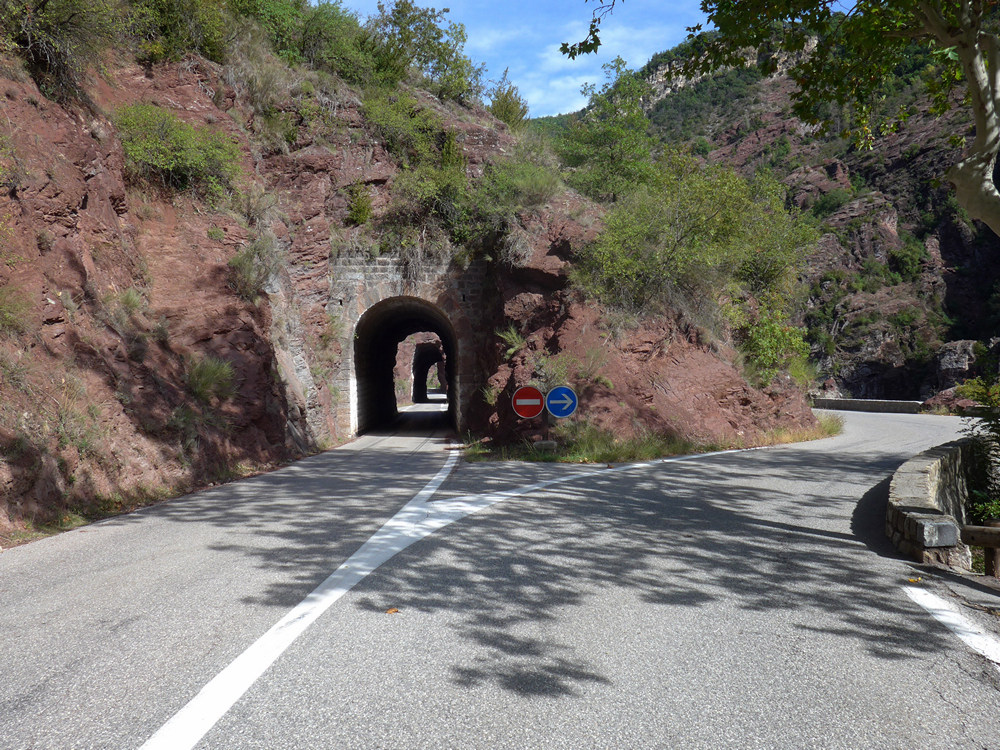 For some reason I didn’t get a close photo of the Pont de la Mariée. I walked over it and got some photos.

My Garmin keeps beeping in all the tunnels and I know that it’s going to f*** the data up when I come to upload it. In the longest tunnel I went through there were bats flying around inside; the first time I’ve seen that. So I’m nearly at the end of the gorge I think, or least the interesting bit, and hopefully approaching Guillaumes, for the beginning of the climb to Valberg. Hopefully there won’t be millions of amazing views on that climb either, otherwise I’ll be stopping all the time. I just want get on with some cycling. Damn this spectacular scenery!

This report coming from the col de Valberg. That was pretty tough. I had a banana right at the bottom or about 20 yards into the climb. And then I did the rest in one go, so I had to forsake lots of interesting photos: bridges, roads with hairpins looking good, but I just wanted to keep going. The sun was on me virtually the whole way, which is good because the air temperature is quite cool and with the fact that I’m sweating that would have been quite chilly I think, so the sun was quite useful, and not too hot. I was going up it steadily in second gear until I reached a village, Saint-Brès, then shortly after that it was first gear all the rest of the way up. There were a few sections where I had to get out the saddle, and sometimes I got out the saddle anyway just to use different muscles mainly. When I first saw the col sign, the road was still climbing so I went straight past it until the road started levelling out, then turned around and went back to get the col photo. 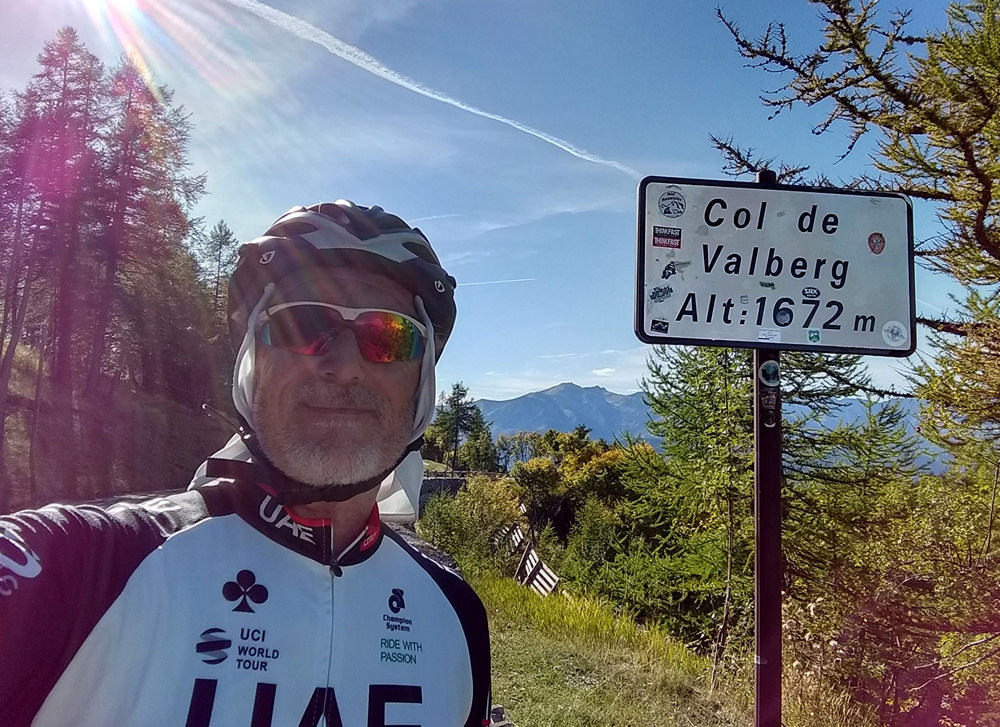 But yeah that was pretty tough really, so I’m glad that it’s over. I can’t take the photos on the way down because I’m doing the descent via a different road, so I can stop as much as I like on that. The thing is about the descent is that it’s on the north-facing side, so the sunshine will be on all the views, hopefully, so hopefully there will be some photos to get. Over and out for now.

After the last report, I stopped there at the col for a while and had half a soggy sandwich and a fruitcake thing. I put my arm warmers and my raincoat on. I took off my neck protector thing because it was wringing wet, as was the rest of my kit. To get to the route down, I went through Valberg, a place with lots of chalets, designer boutiques and people with sunglasses on their heads. Shortly into the descent, which went a different way down the mountain, I saw this sign. 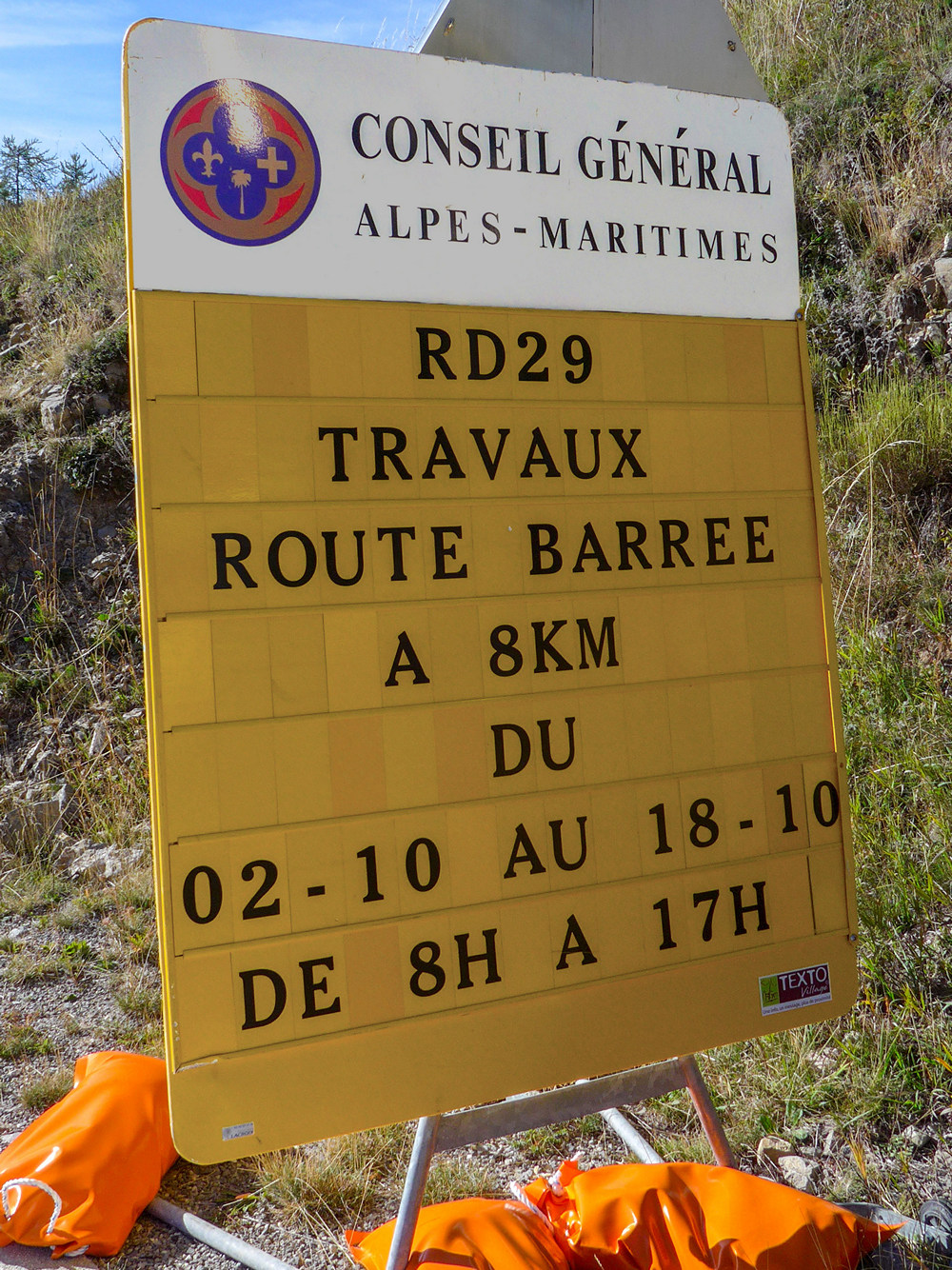 There was no way I was going to ride 5 miles downhill just to find out that I needed to ride 5 miles back again. The climb had taken it all out of me – I had nothing left. So I made a short climb back up to Valberg and descended the way I came. It’s funny how things turn out for the best because that descent is absolutely amazing with long smooth bends and only a couple of hairpins. The other advantage is that I had the sun on me again so that was keeping me warm. I got some pictures but the sun had actually dipped below the hilltops once I was on the gorge, rendering it in shadow. And the rest of the ride was photo-less. I got back to Entrevaux just as the clock was chiming 6. My right knee is hurting slightly. Here are the photos from the descent: 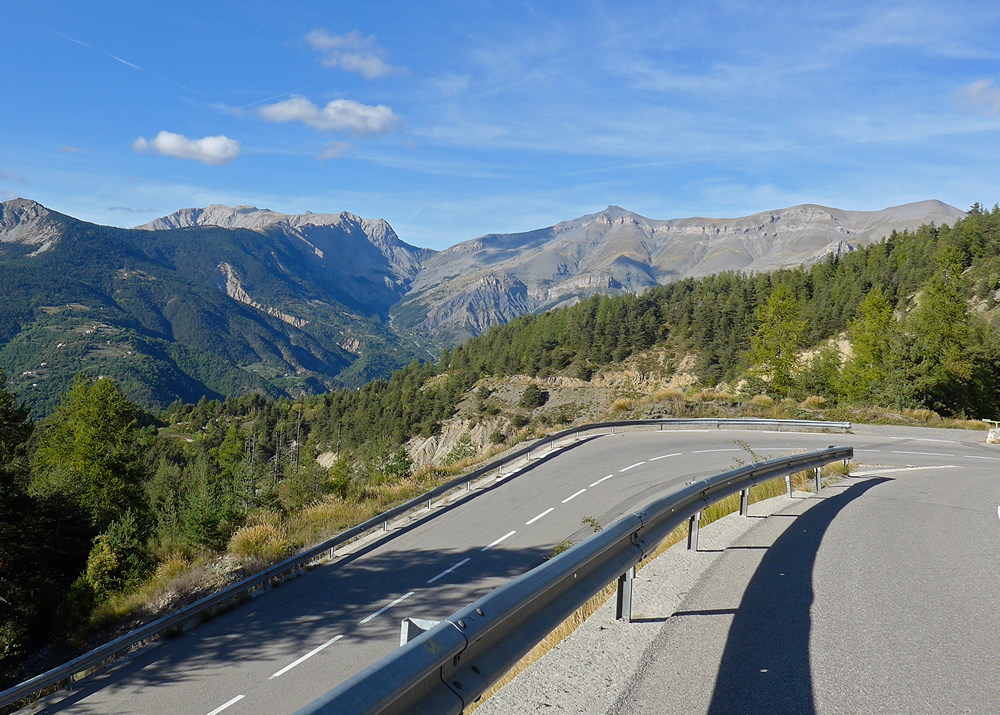 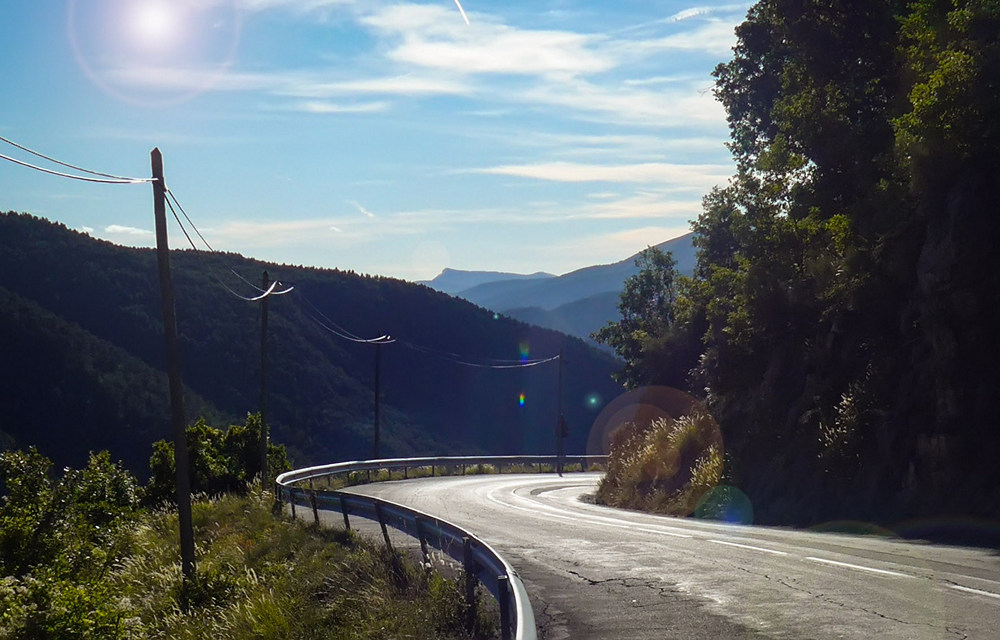 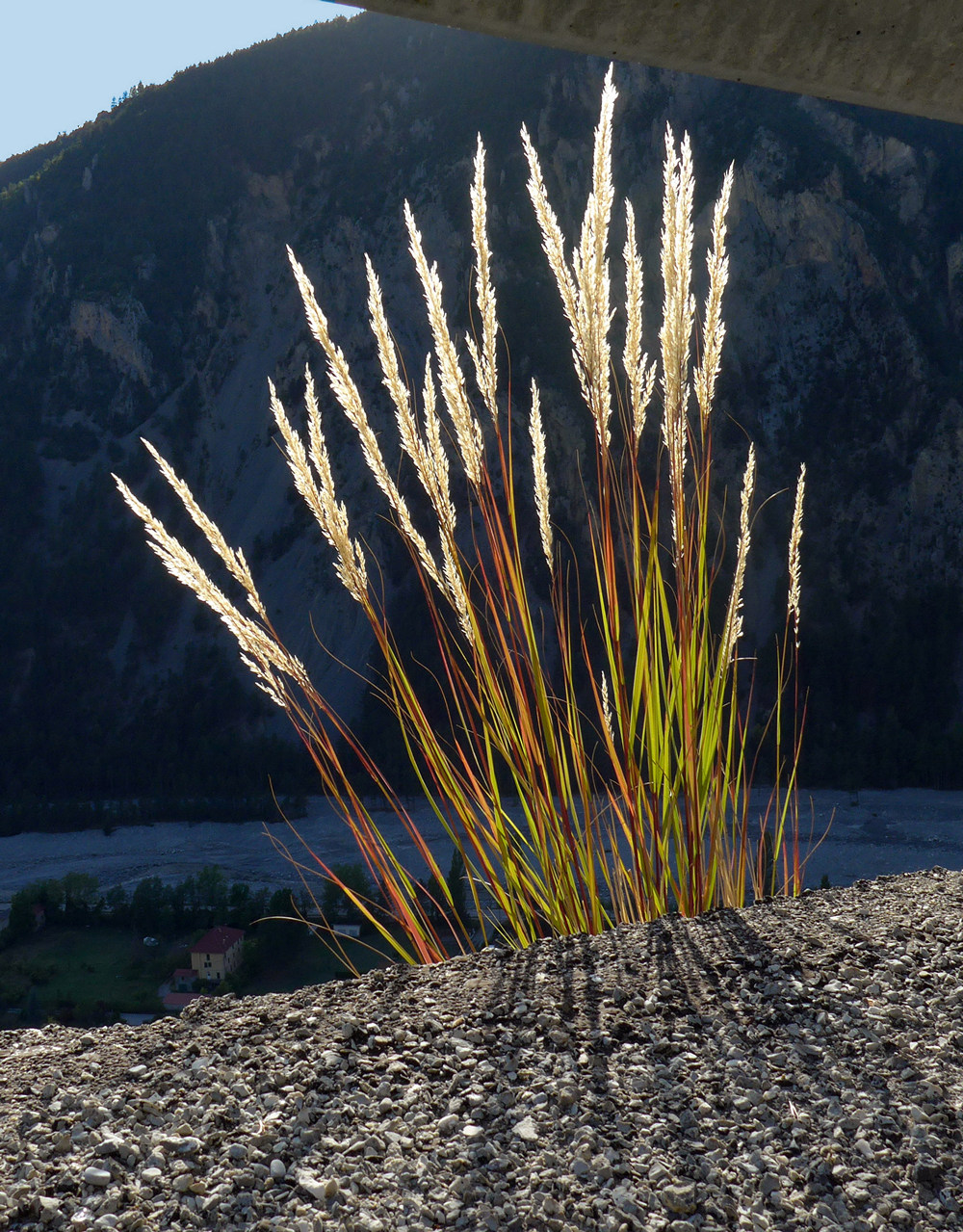 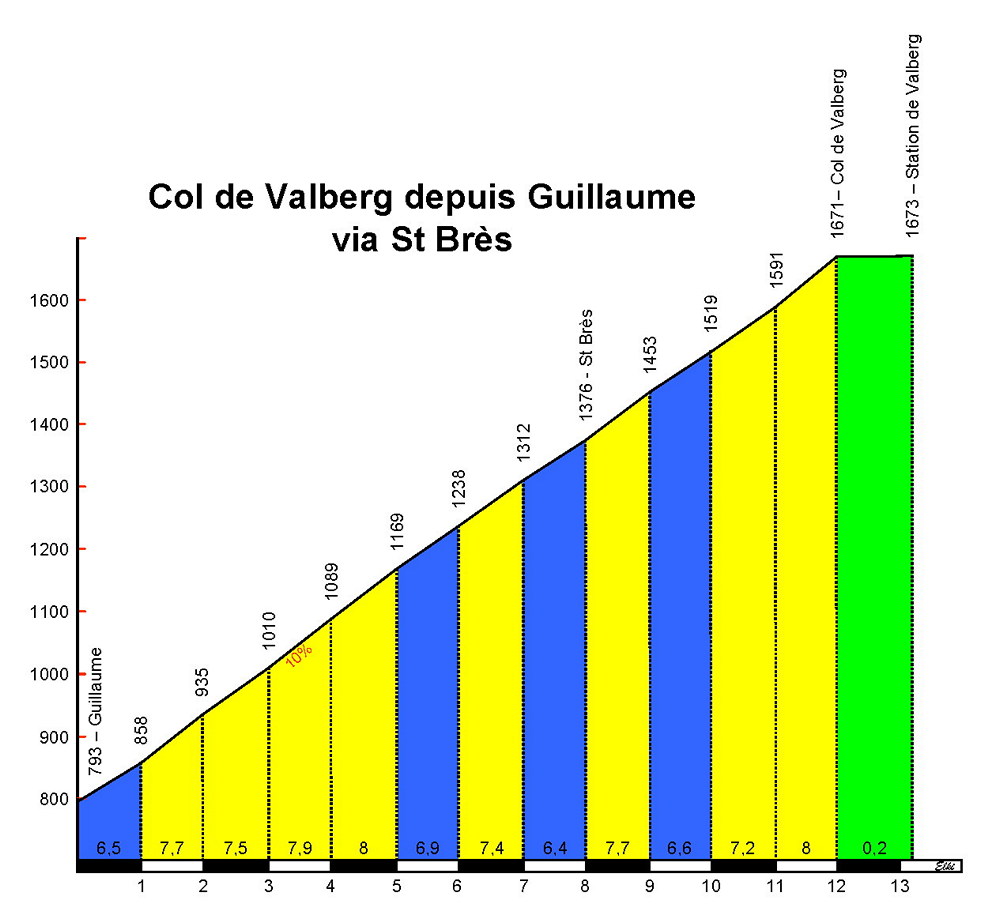