Only an as yet unwritten history will reveal how accurate that alternative title is. As I write this, Britain is bracing itself in deference to a severe weather warning foretelling of the impending doom due to be wreaked by ‘what could possibly be the worst storm since 1987’.

Being ‘pre-storm’ day, it was very windy – 22 mph south-westerly with gusts of 40mph. There were just three of us out today braving the conditions. I had fitted my mudguards for the first time since last winter and had my rain jacket, but it was so mild I was still in shorts.

Shortly after we set off we were straight into some rain. It was enough to ensure that my goggles got so wet that it was difficult to see where I was going. It didn’t last long though and, despite what looked like heavy rain in the distance, the rest of the journey to Faversham was made in glorious sunshine. It was a very mild (17°C) day and with that strong wind directly behind us all the way there it felt great. We were able to get some good speeds going with virtually no effort. Most of the roads and lanes were wet and muddy from last night’s rain and were already strewn with lots of debris from trees and hedgerow. So it wasn’t too much of a surprise when I got a puncture in my rear tyre. The sound it made was unmistakable and it’s the only time I’ve had a flat with such a loud release of pressure. 12 minutes later we were back on our way. (see here for post-mortem!) 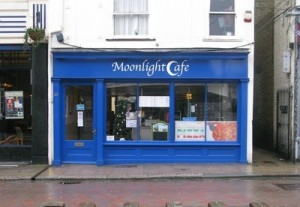 We had brunch at the Moonlight Café in Faversham. Very nice it was too. I had been riding ‘in the fasted state’, having had nothing to eat up until that point. It was a new thing I was trying out – supposedly you burn more fat under those conditions.

We had been fully aware that the trailing wind of the outward journey would turn into a strong headwind for the return. And it didn’t disappoint! Battling directly into that stiff south-westerly must have added the equivalent of 5 or 6 miles to the journey. It felt like we were constantly going uphill. Our average speed of over 14 mph from Marden to Faversham turned into 12.7 for the return! We experienced some strong sideways gusts that had me instinctively gripping the bike harder and crouching down to try to keep control. But it wasn’t all bad. In fact it wasn’t as severe as I had been dreading. To a certain extent the return leg felt like one of those rides that never seems to end. But eventually it did. As we arrived in Marden I saw that we had covered 59.6 miles – that was so close to 60 that I decided to ride straight past the car park and turn around further up the road to add a bit more to the journey to round it up to 60, which seems a more fitting number, considering the effort!