Having already climbed the Col de Turini via La Bollène-Vésubie back in 2019, this time I chose to climb it from Sospel, via Moulinet, and return the long way back via Col de l’Orme and back to Sospel via Col de Brau. So I have now ridden all three roads to the Col de Turini.

Porridge with apricot jam was my fuel for the ride. 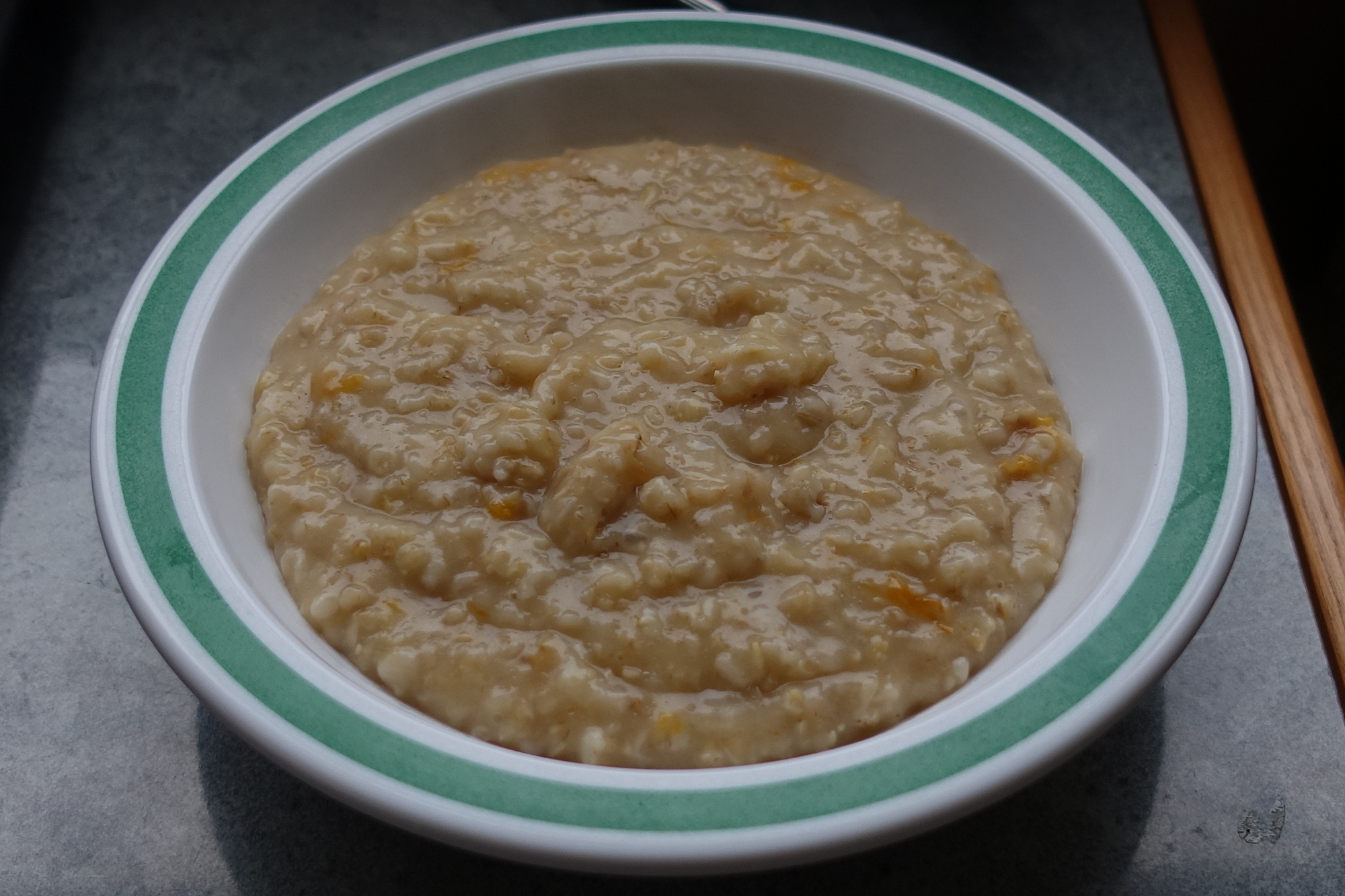 Before leaving, I had a chat with a German couple who were parked next to me. They told me the weather yesterday had been wall-to-wall sunshine and ideal for the ride. Today there were clouds about. Oh well..

As usual I dictated into my phone at various points.

I already knew that the first part of this climb to Col de Turini would be easier than the second bit. I was determined to remember where the significant climbs were in this ride so I had a little mantra going in my head – “fifteen miles then twenty-five for two and a half”  I kept saying it over my head as a way of remembering where the climbs were.  It meant that the first climb (to Turini) would finish at 15 miles and then during the descent there would be another climb starting at 25 miles and would last 2½ miles. Sounds confusing but it made sense to me!

The first section of this ride was very easy – I was never in first gear. In fact some sections were flat. And the views were spectacular. So I had to keep stopping to get shots of the gorge and the road. 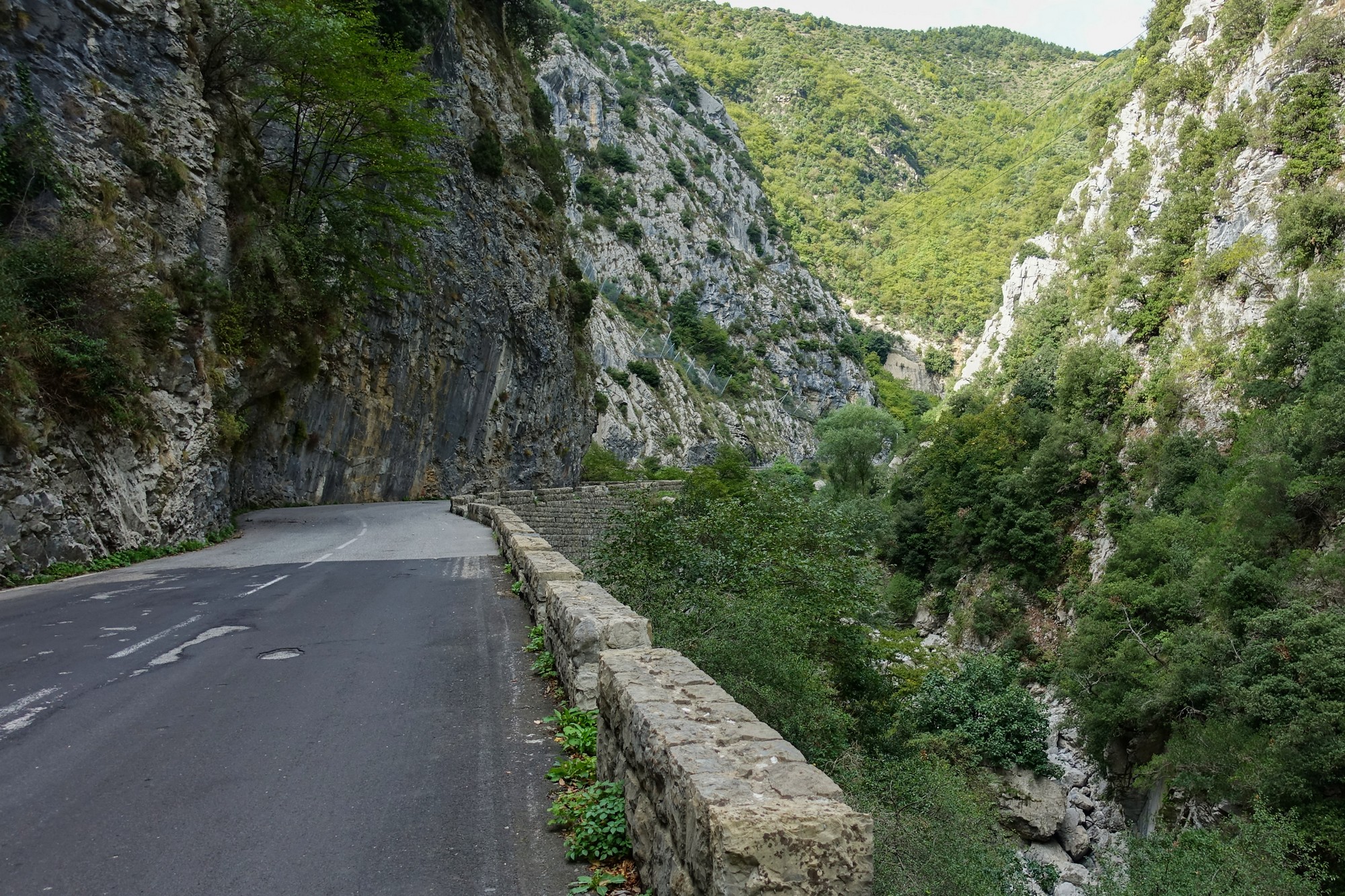 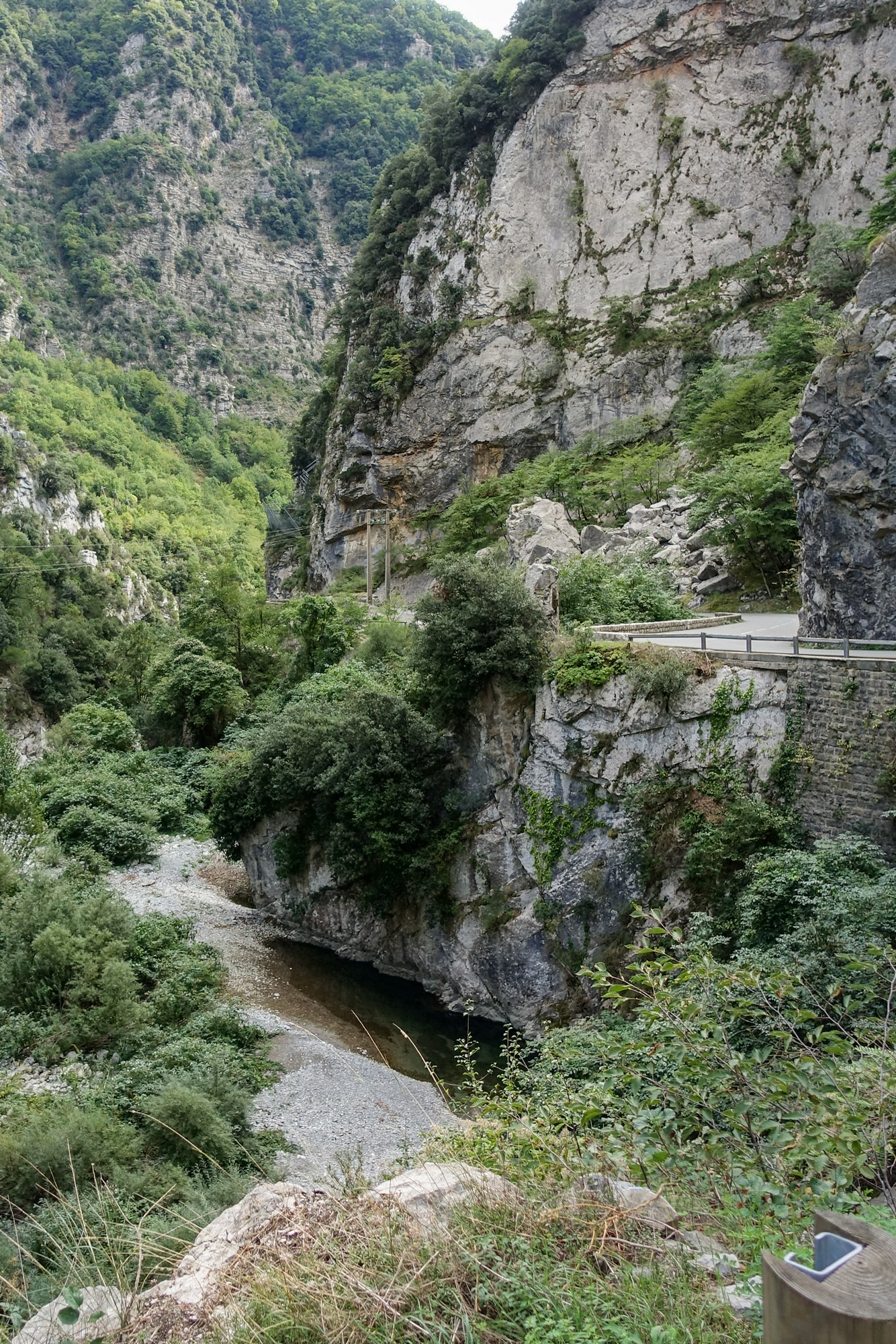 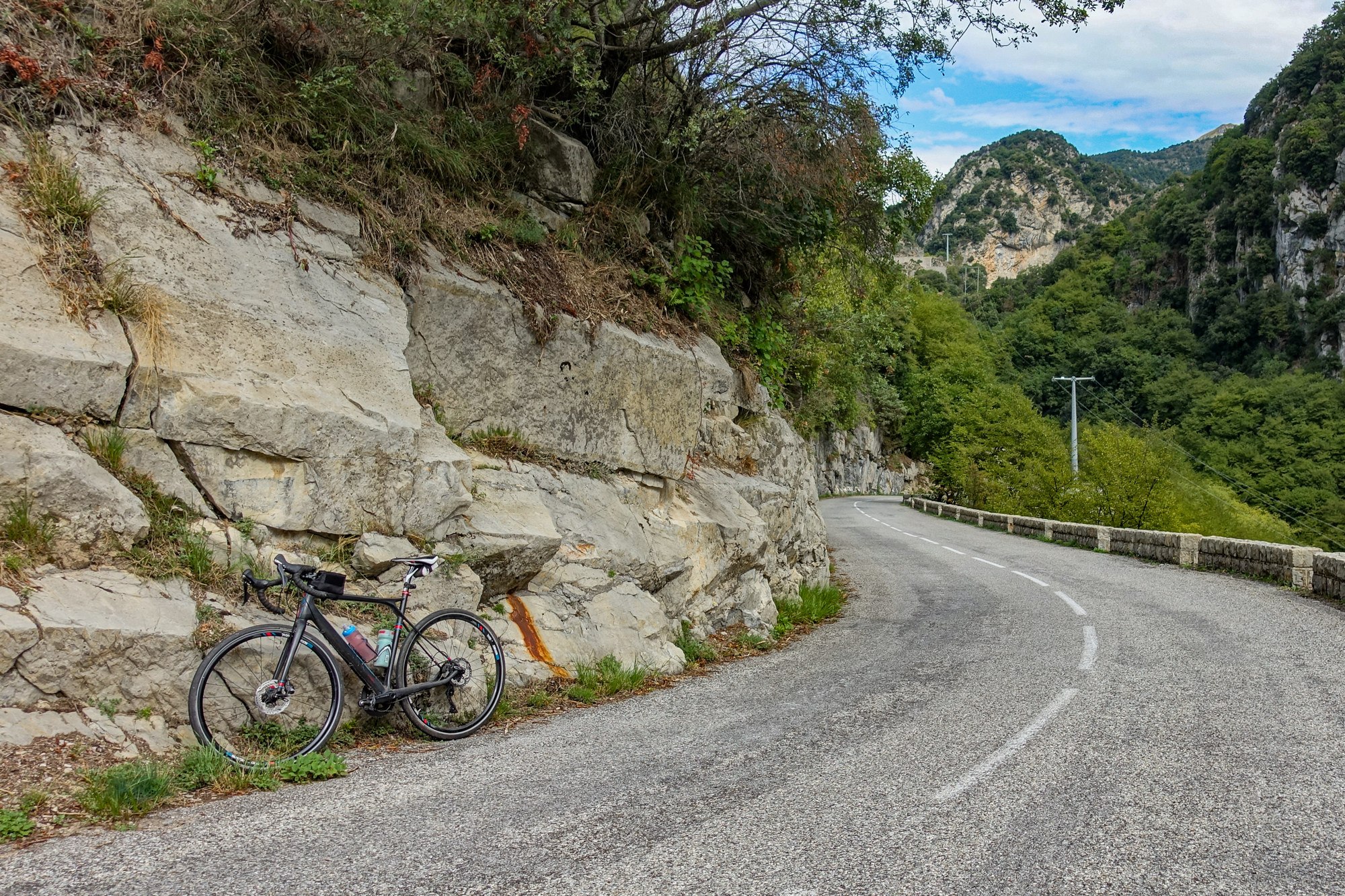 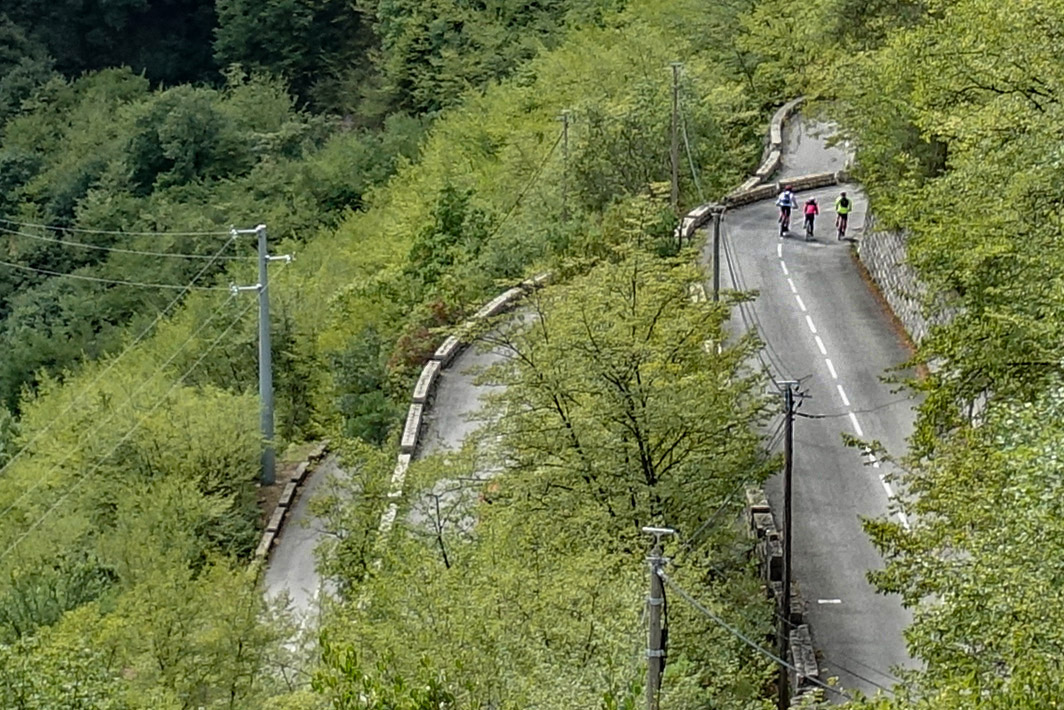 Every time I ride through a gorge it always feels like it’s bigger than the one before. This one, les Gorges du Piaon,  seemed huge! The road clings to the edge of the gorge. You can often see it climbing up the rock face ahead. Around one switchback, la Chapelle de Notre-Dame de la Menour came into view, perched high up in a gap between hills, as close to God as possible, no doubt.

A series of ‘lacets’ (‘laces’ in English, the French word for hairpin bends) led to the chapel 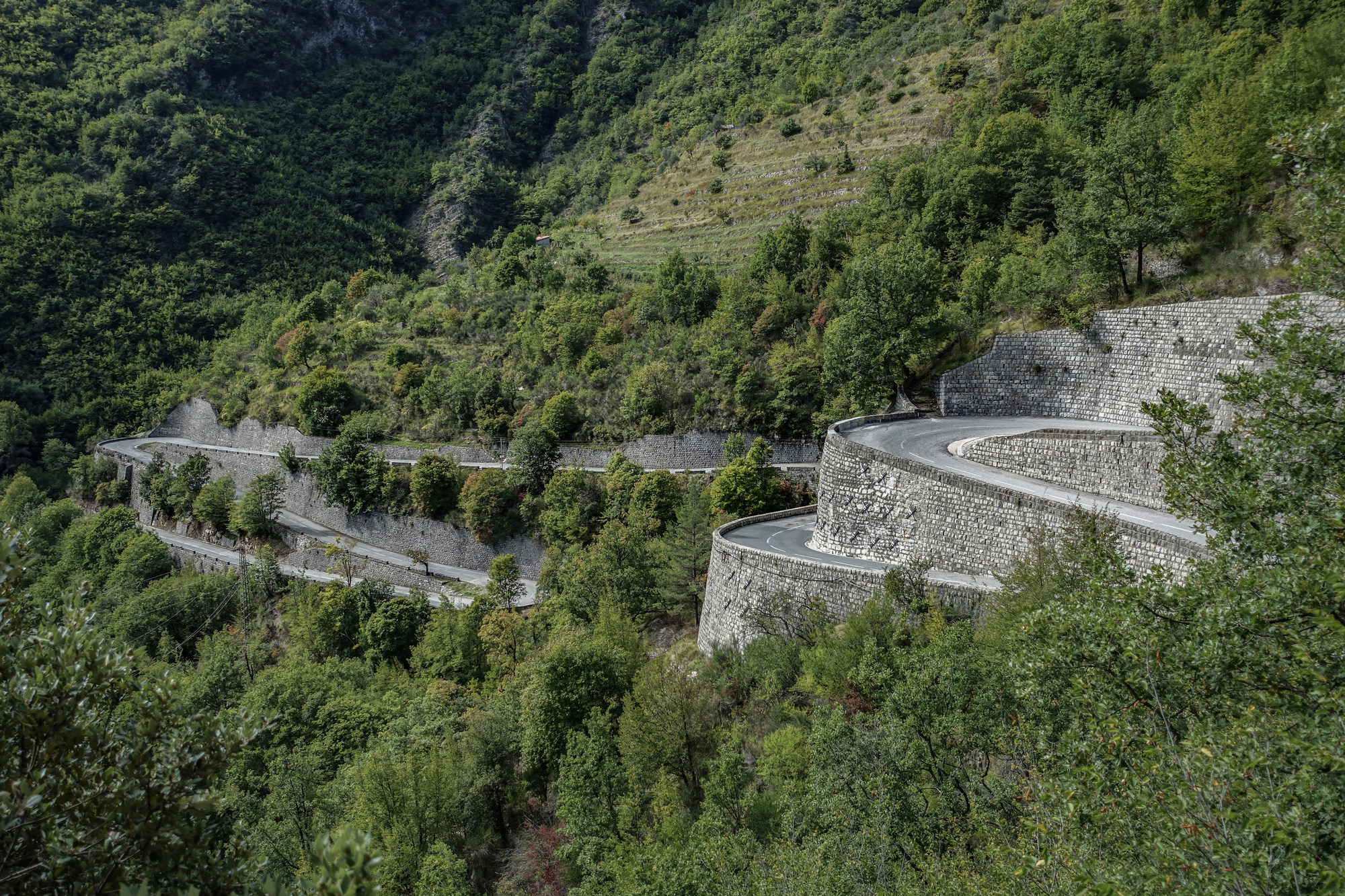 A mile-and-a-half later, I reached Moulinet. 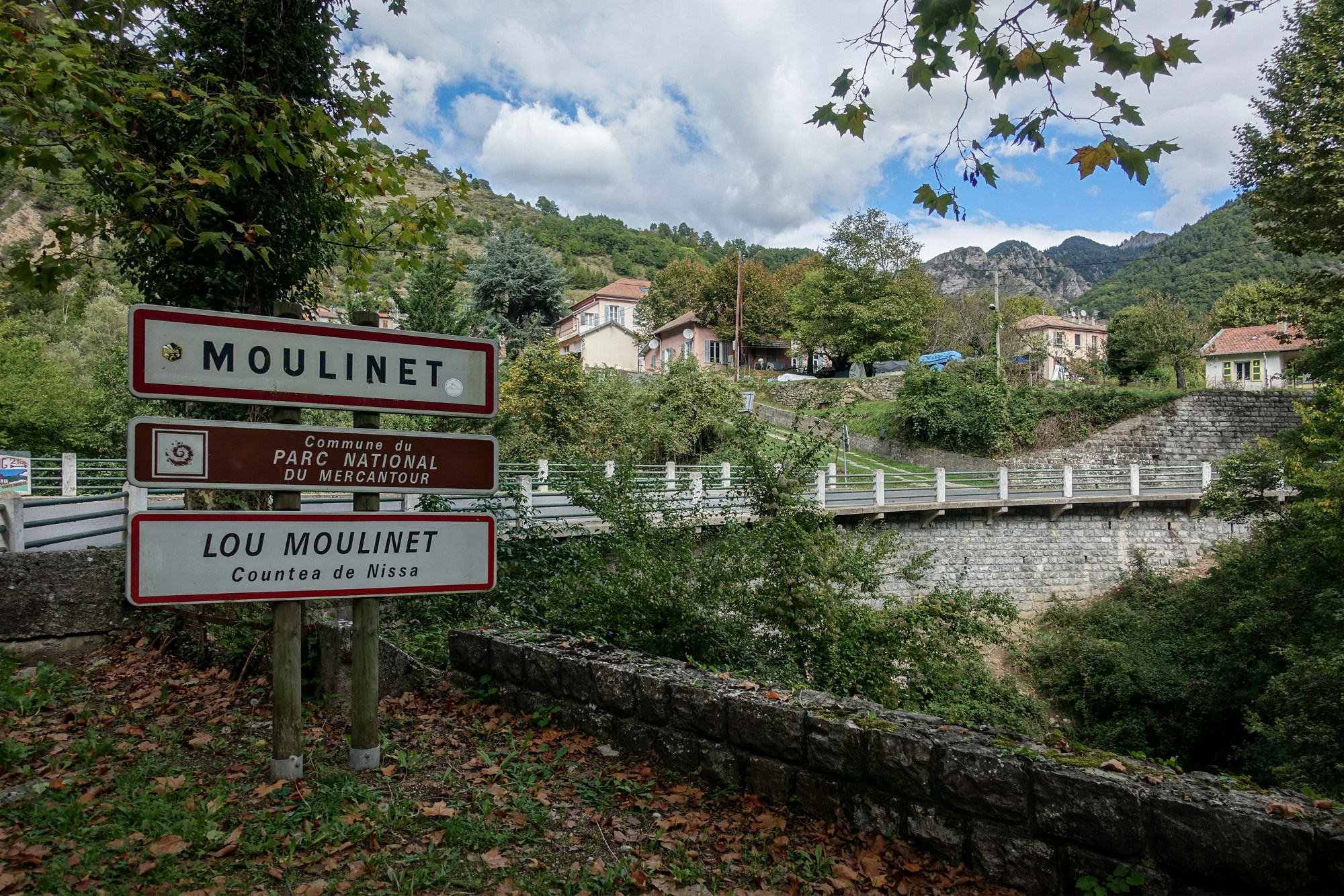 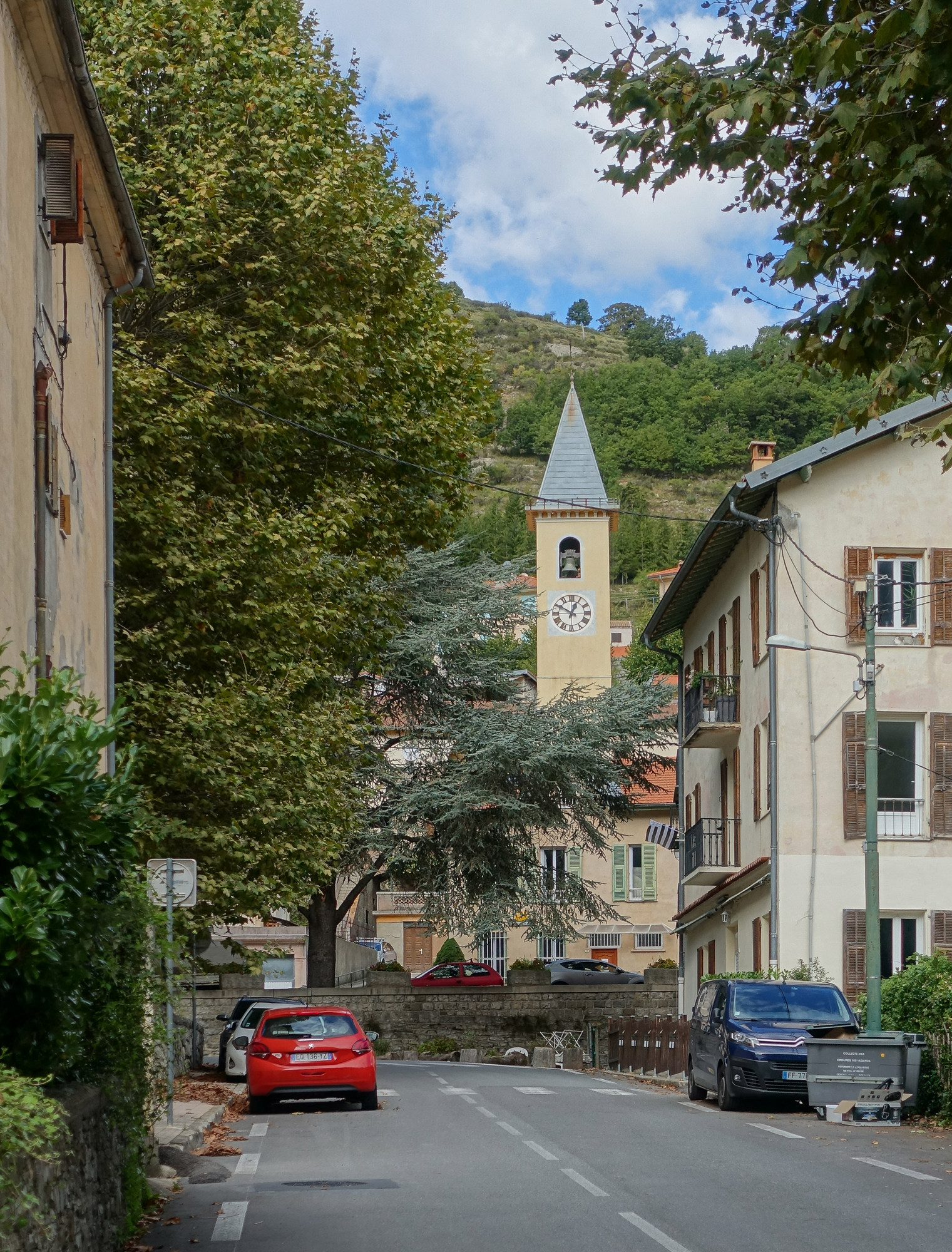 The road levelled out as it went through the town After Moulinet I knew the steeper bit was about to begin, and I’m on that now – it’s second gear at the moment. But the view has gone because it’s covered by the forest. 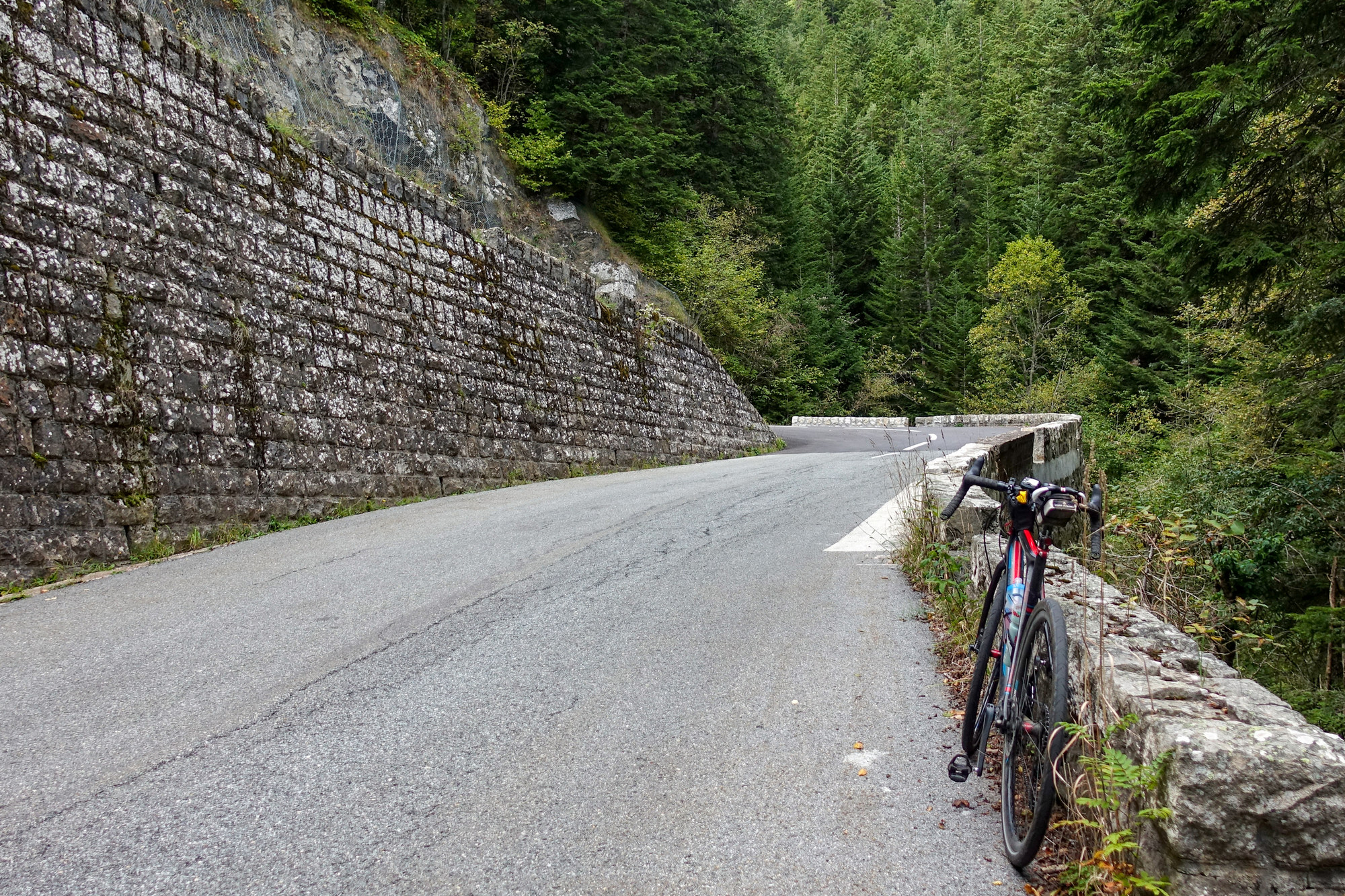 I have just seen a sight very high up in front of me of a grass-covered peak and I’m wondering if it could be l’Authion, the bit beyond the col that I’ll attempt today if the weather is ok (last time it was in the clouds). 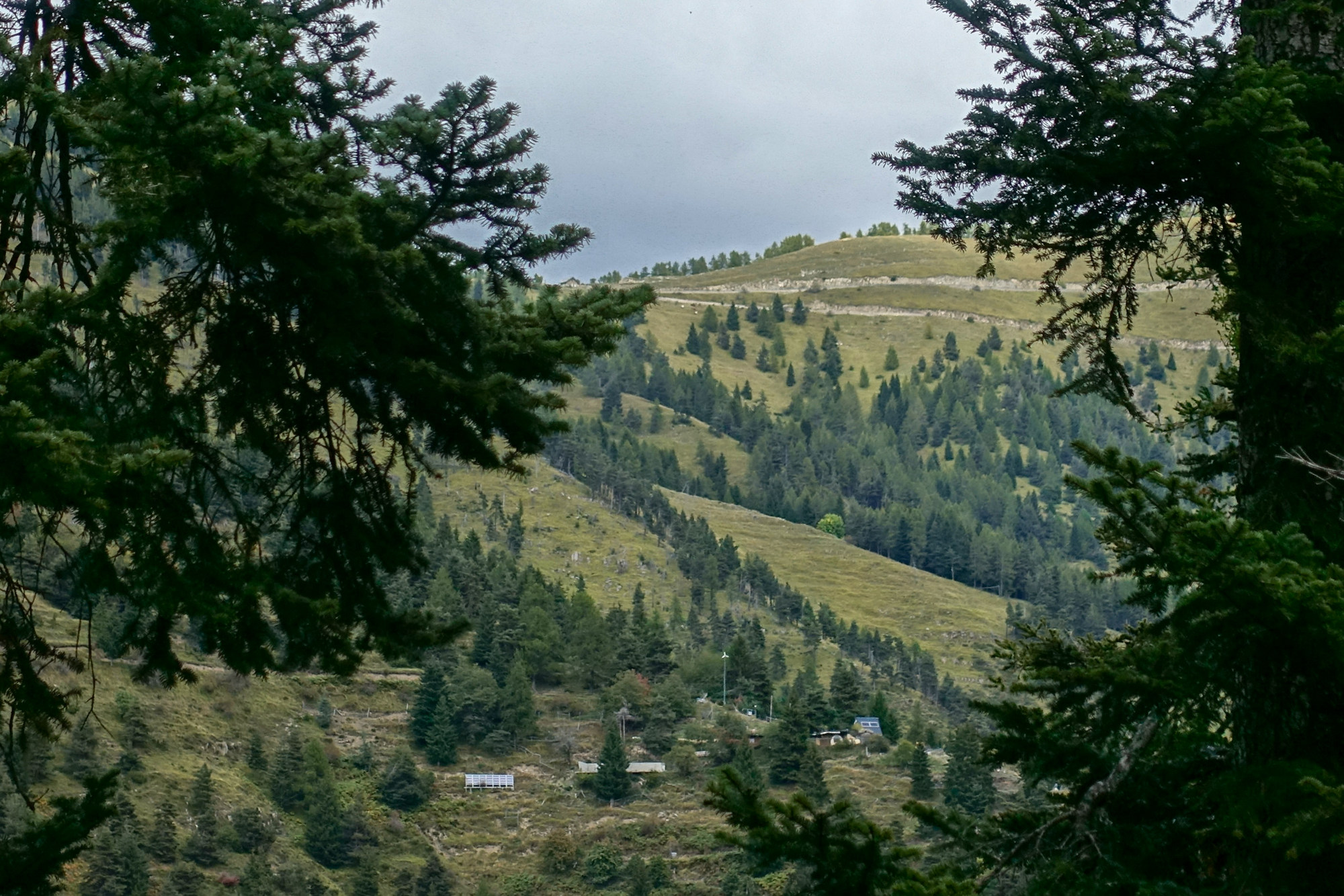 There was supposed to have been 25% cloud cover today, but unfortunately it’s more like 90%, with just the odd patch of blue and very rarely any sunshine getting through, but standing here I can feel a slight breeze blowing on my back, so that will help me up the incline.

This report coming from the Col de Turini. That last section had some level bits in places but towards the end it was relentless – just through the forest though, so no views. The seven miles from Moulinet to the col are at an average of 7.2%, but there are steeper bits near the end. There were quite a few switchbacks. I’m now convinced that what I was seeing earlier as a grassy hilltop was indeed the bit near l’Authion. 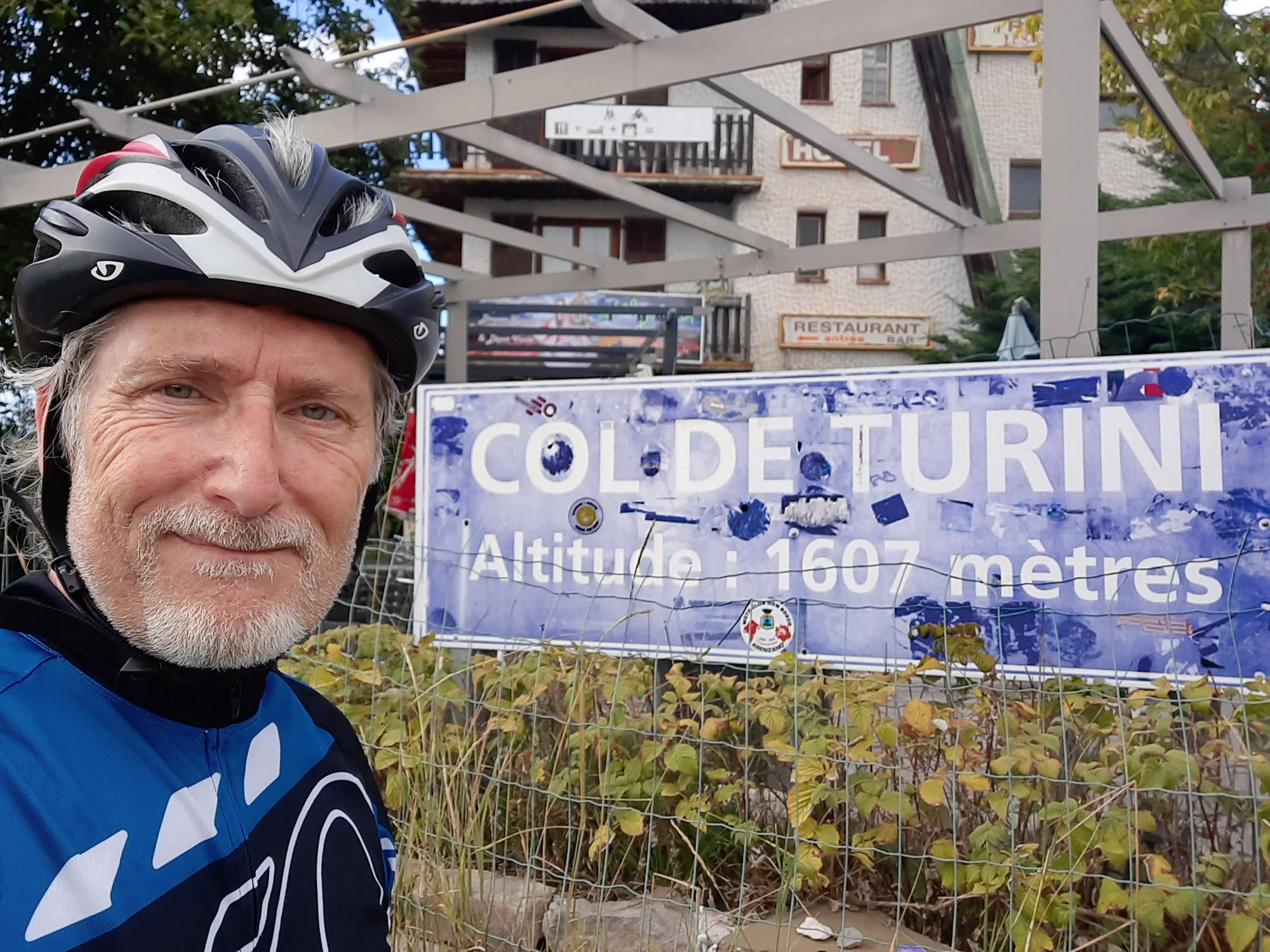 There are fragments of blue sky but no sun at the moment. The area is quite cool and there’s not a breath of wind. In fact it reminds me of the last time I was up here. So this time I’m going to try to reach l’Authion and hope there’re no clouds up there.  Five or six Porsches of various type have just roared up and parked right in front of me, their brakes smelling of bravado, their owners reeking of wealth as they step out, their sunglasses costing more than my bike…

This report coming from le Chalet “Charles Alessi”, which I assume is some sort of refuge for climbers/walkers. 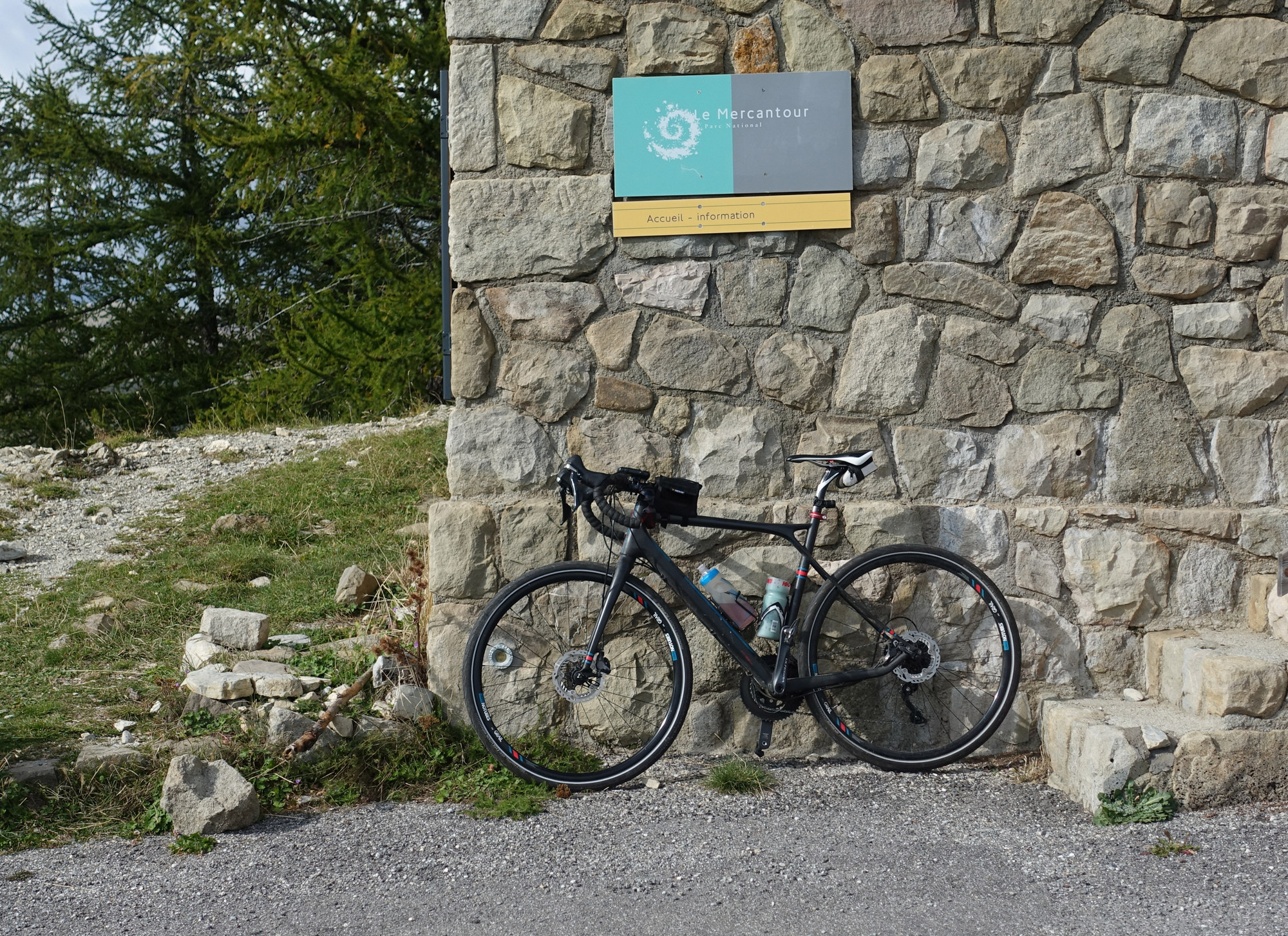 The view from the col de Turini is almost non-existent. Climbing up the extra 283 metres to this point is worth it for the view alone. 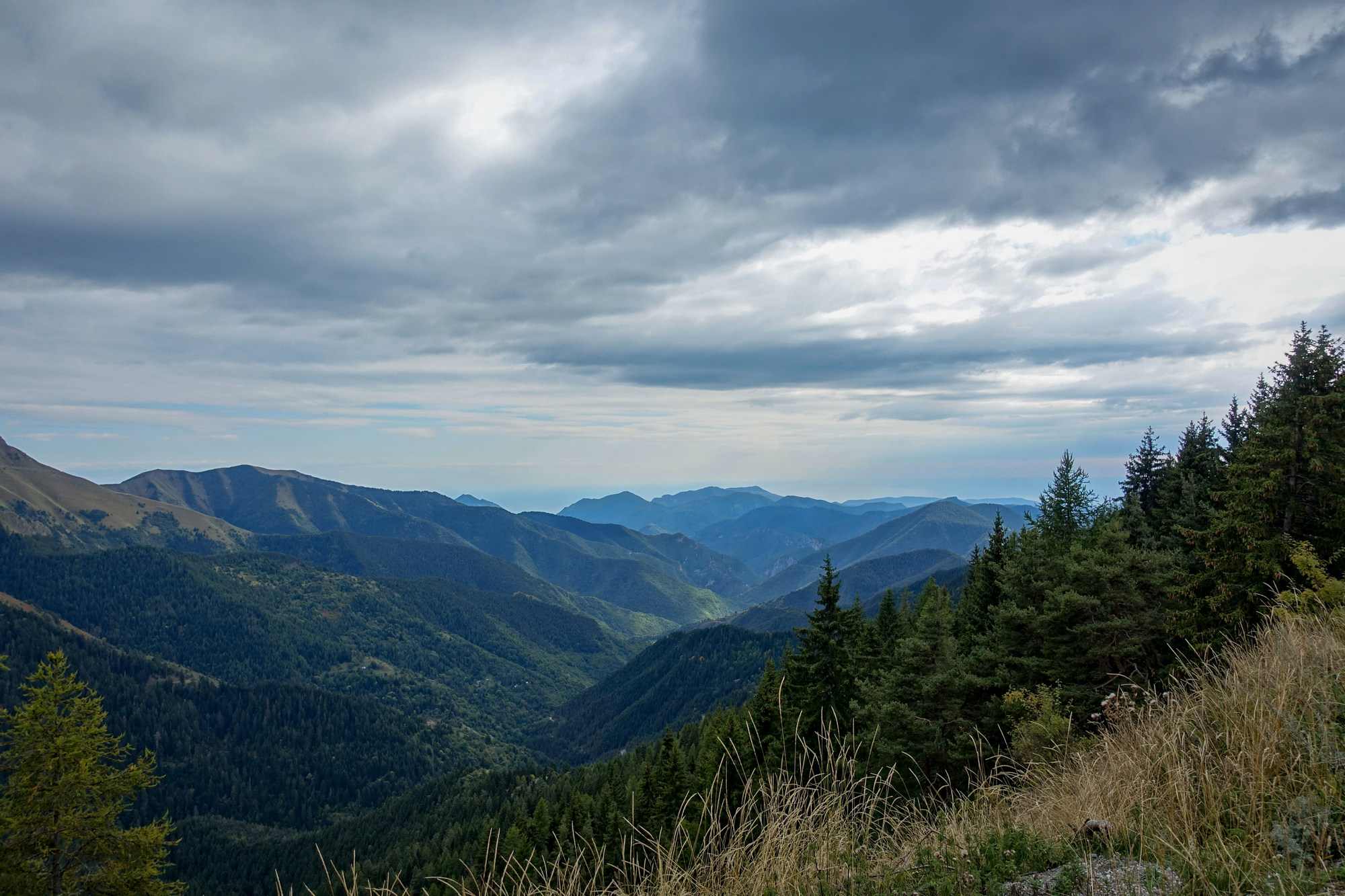 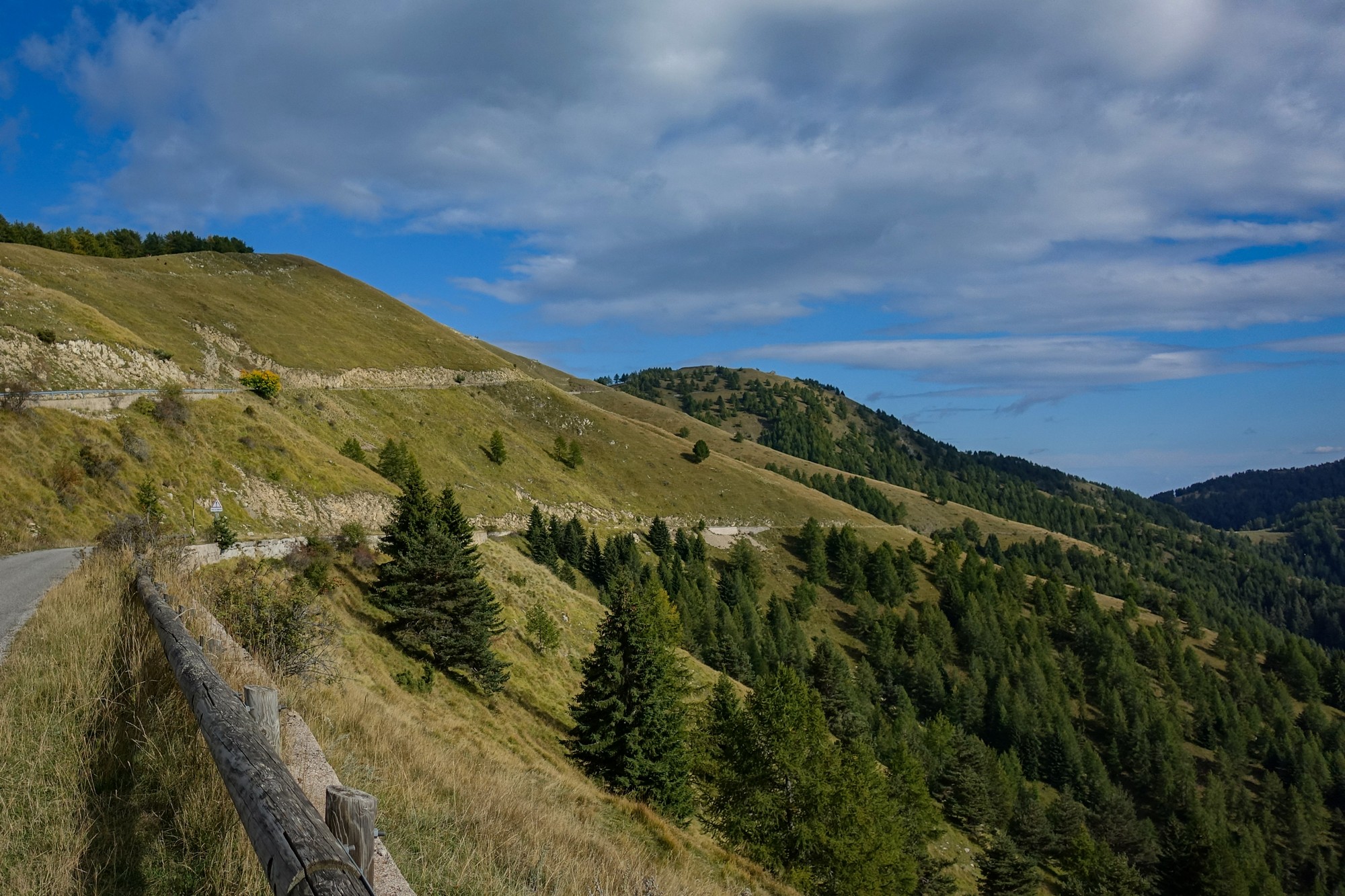 The climb from Col de Turini up to here was a lot steeper than I had remembered, so I’m on the verge of running out of energy. There’s certainly no way I’m going to go the long way round the loop at the top here. So the only option for me is to go up the one-way the wrong way round, which I don’t fancy doing, as that also looks steep. Also I’m worried about time and the fact that there is another 2½ mile climb on the way back, so I need to save something for that. It was very cold coming up that last bit – I nearly stopped to put my wind jacket on. It seems a shame to have come all this way and not go up the last bit to l’Authion because the sun is now shining and it’s not covered in clouds, which is quite rare I hear.  It’s a missed opportunity, like the lakes beyond Alpe d’Huez, a week ago. But based on those factors mentioned, I chose not to do it. I know it sounds a bit like the scene from the Blues Brothers – “I ran outta gas, I got a flat tyre, my tux didn’t come back from the cleaners, an old friend came in from outta town...”, etc, etc

I’m doing this report from the col de l’Orme. It is so peaceful here you could hear a grasshopper on the other side of the valley! 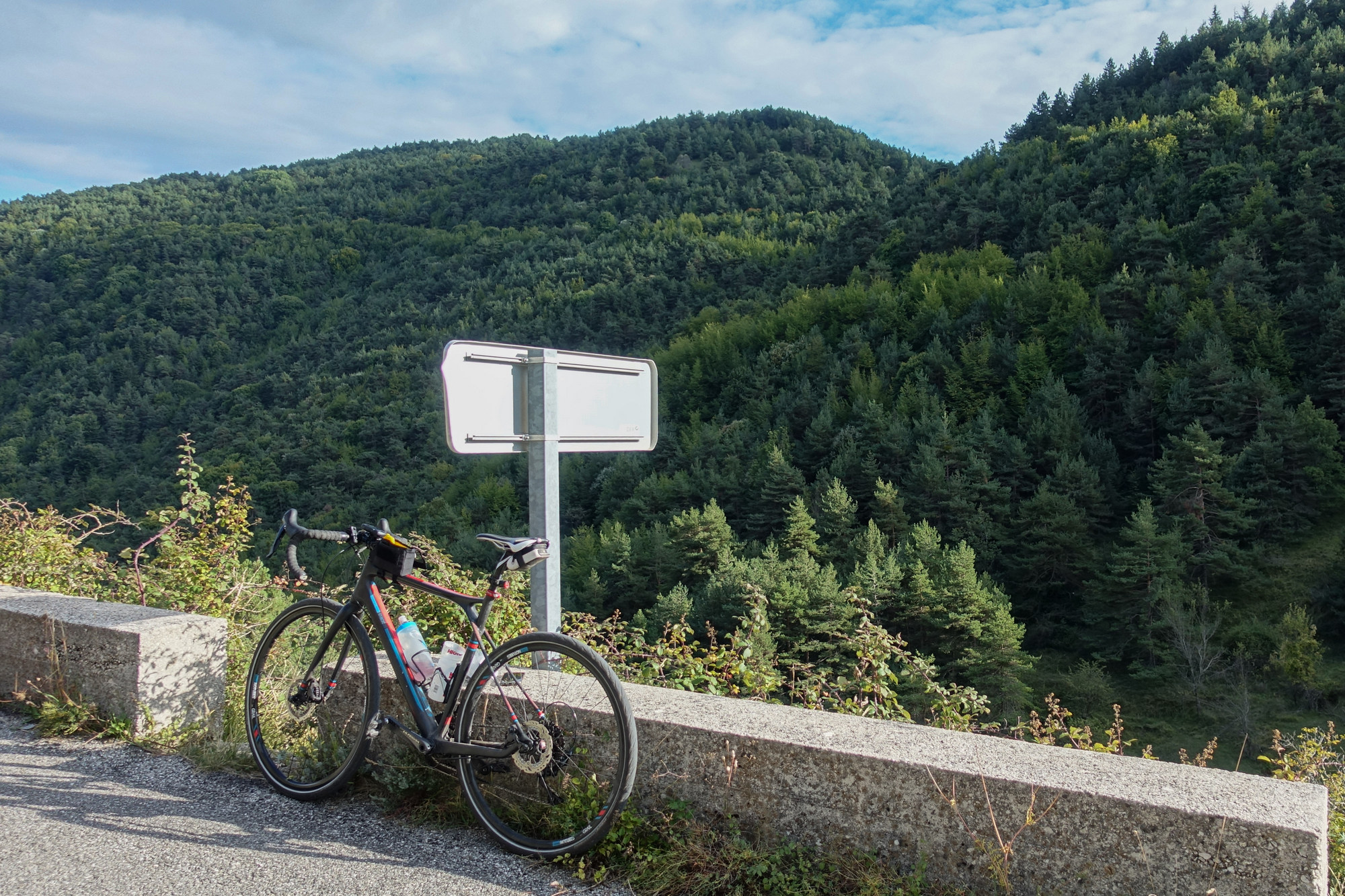 The descent started off extremely cold – my fingers were gone and even my feet were getting cold and the worst part was that it wasn’t a straightforward descent from the col – every now and again it straightened out and even climbed slightly, which I was not in the mood for. 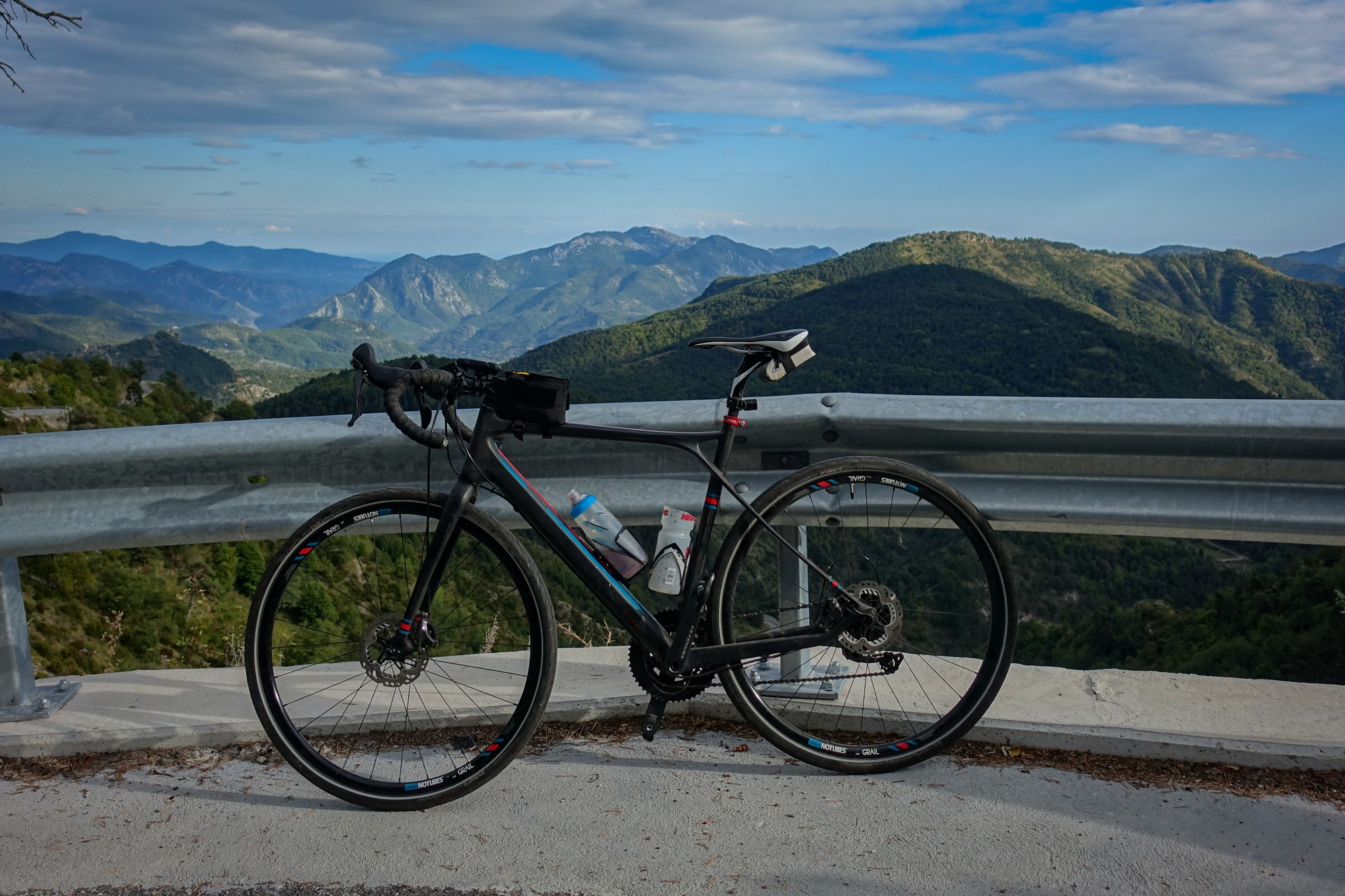 But then it turned onto the most insane road I’ve ever been on, the D21. It’s difficult to do it justice in photos – you have to look at it on a map to appreciate the twisty nature of it. I’m sure someone had fun designing it. 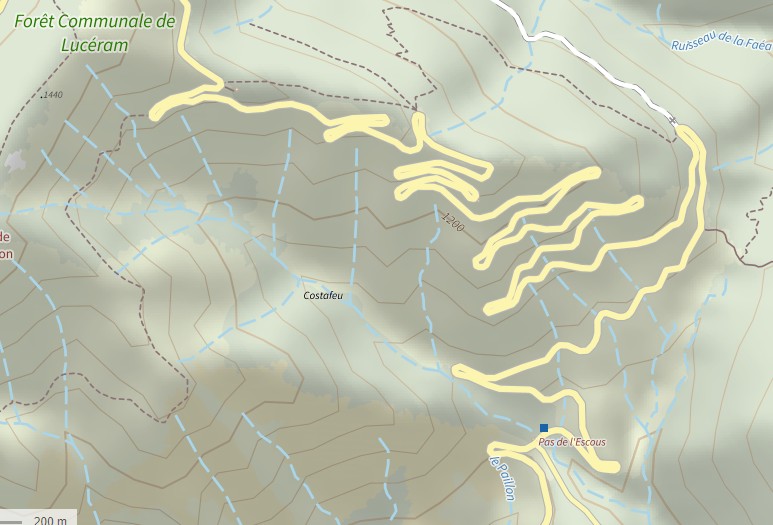 As I am getting lower, altitude-wise, the temperature is rising. That is good, and at the moment the sun is actually out but I’m just about to enter the shady forest again, which I believe is the beginning of the two and half mile climb mentioned in my mantra!

Final report from back at base. The last two and a half mile climb of the day began just after that last report, which is weird because a col would normally be a high point. It started off in the forest quite steep at about 7 or 8% I would guess. I kept thinking it would only be about a half an hour of climbing. But it actually eased up quite considerably, so was nothing to have worried about in the end. The road emerged into a beautiful area, sort of scrubland, a bit similar to rides I had further west along the coast. The views were magnificent. 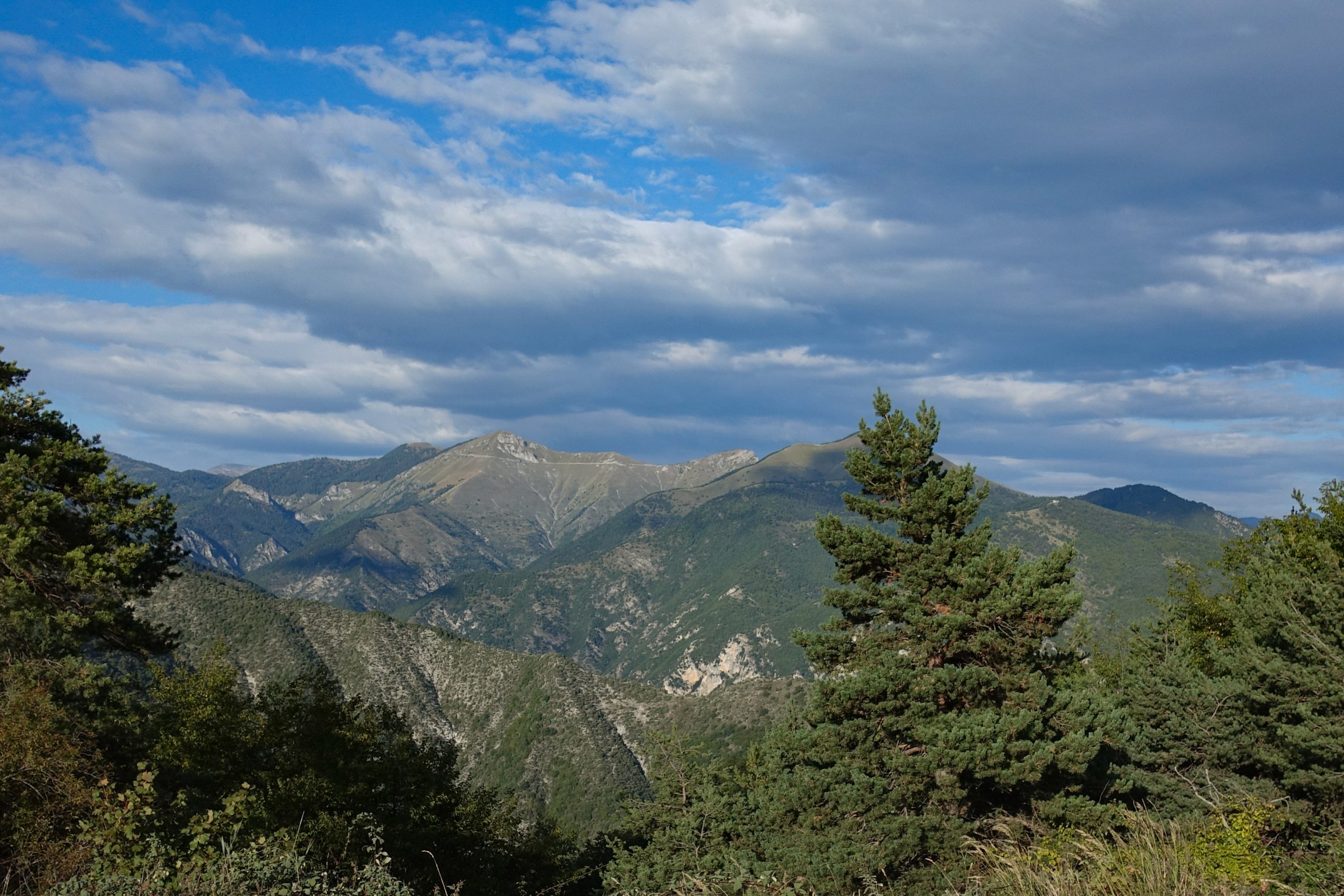 Needless to say I was stopping frequently for photos. The evening sun had come out and there weren’t that many clouds in the sky and I had warmed up considerably. That road was extremely quiet, traffic-wise, with only a group of five motorcyclists passing me. 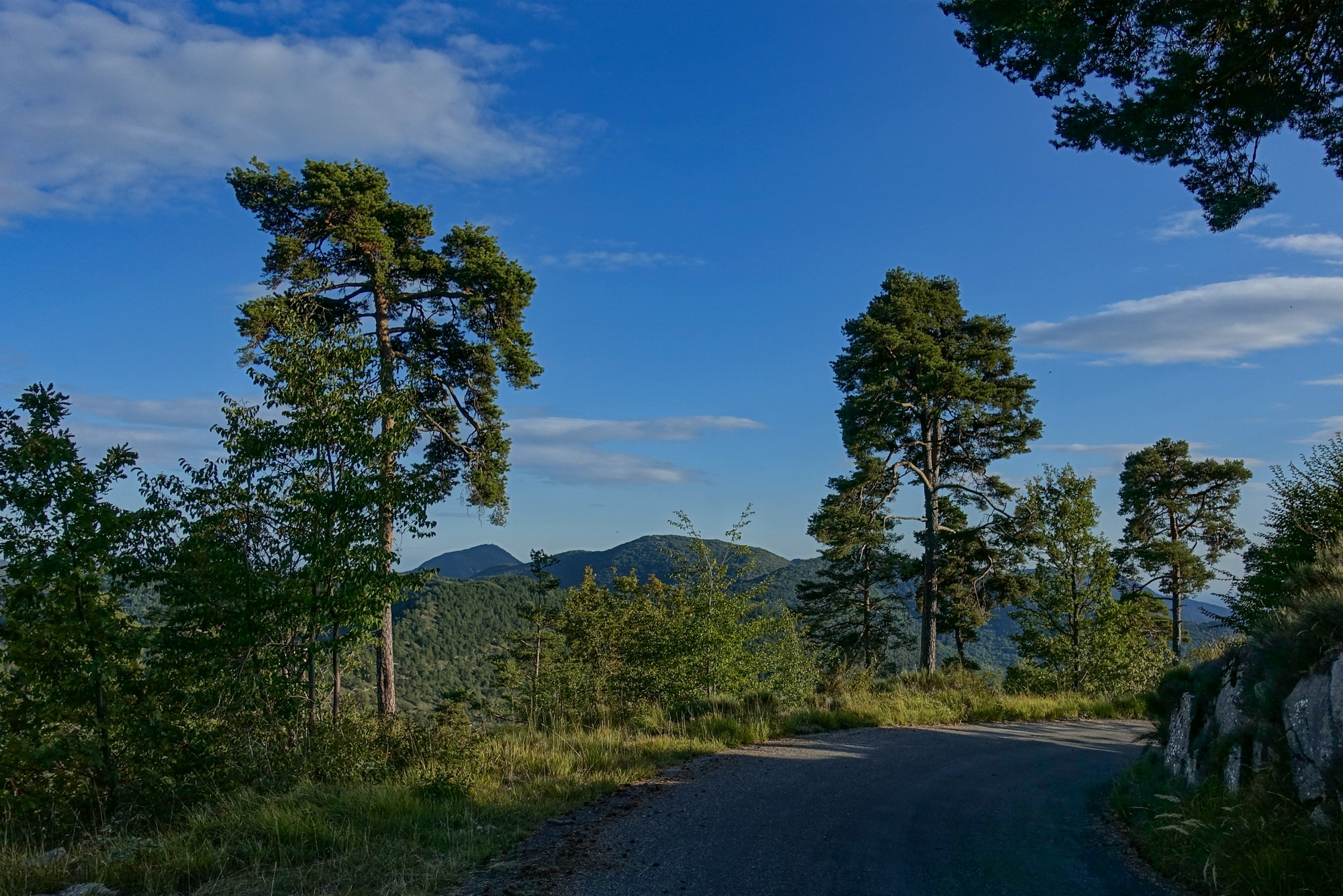 The descent was excellent, incorporating yet more switchbacks. At one point I saw the road ahead rising up again and was a bit perturbed until I realised that it was just a short ramp up to the Col de Brau. After that, I was following the road that had stressed me out so much the night before, driving it in my motorhome. Switchback after switchback as the road wound down to Sospel. It was a lot easier on a bike than in a 3.5 ton motorhome. It’s good to finish a ride with a long descent.

And with the sun shining…