This was the ride that I was going to do yesterday, but the weather was forecast to be better today for this ride into new territory, over the Col de Laval. And, as you can see, the weather was glorious, if a bit breezy. As usual I dictated reports into my phone at various points:

First report coming at 3.3 miles. I left 15 minutes later than intended at 1:15. As soon as I got on my bike I was reminded that my left shoe cleat wouldn’t clip into the pedal properly. It had been getting bad for ages but now wouldn’t work at all, so I went back to the van and changed it for a brand new cleat.

I only changed the left one for now as I was in a rush to get out on the ride. That said, it had only taken 5 minutes or so to fit the new one. What a difference it makes though – no more faffing about trying to clip into the pedals.
The first part of the route out of Entrevaux was ridiculously steep – I’d say high teens % at least. I was seeing the town from a new perspective on this road and was keen to get some photos but the gradient was such that I would  never have gotten started again if I had stopped. After a while it seemed to go down a bit, then there was another short climb, then down a bit and then flat but at the moment I appear to be on a gradient that isn’t going to ease up any time soon.

At one point I stopped to get a photo and my chain came off for some weird reason, so I put that back on and wiped my greasy hand clean on a nearby rock, plenty of which can be found fallen by the roadside.

There’s quite a bit of road repair going on up this road with various patches having gravel on them – in fact standing here I’ve just seen the gravel lorry go past me and that’s about the only traffic on this road – ie workers fixing the road. I’ve just stopped to get a bit of respite from the sun, in one of the few shady parts I could find and I’ve just realised I have forgotten to bring my white neck protector thing. 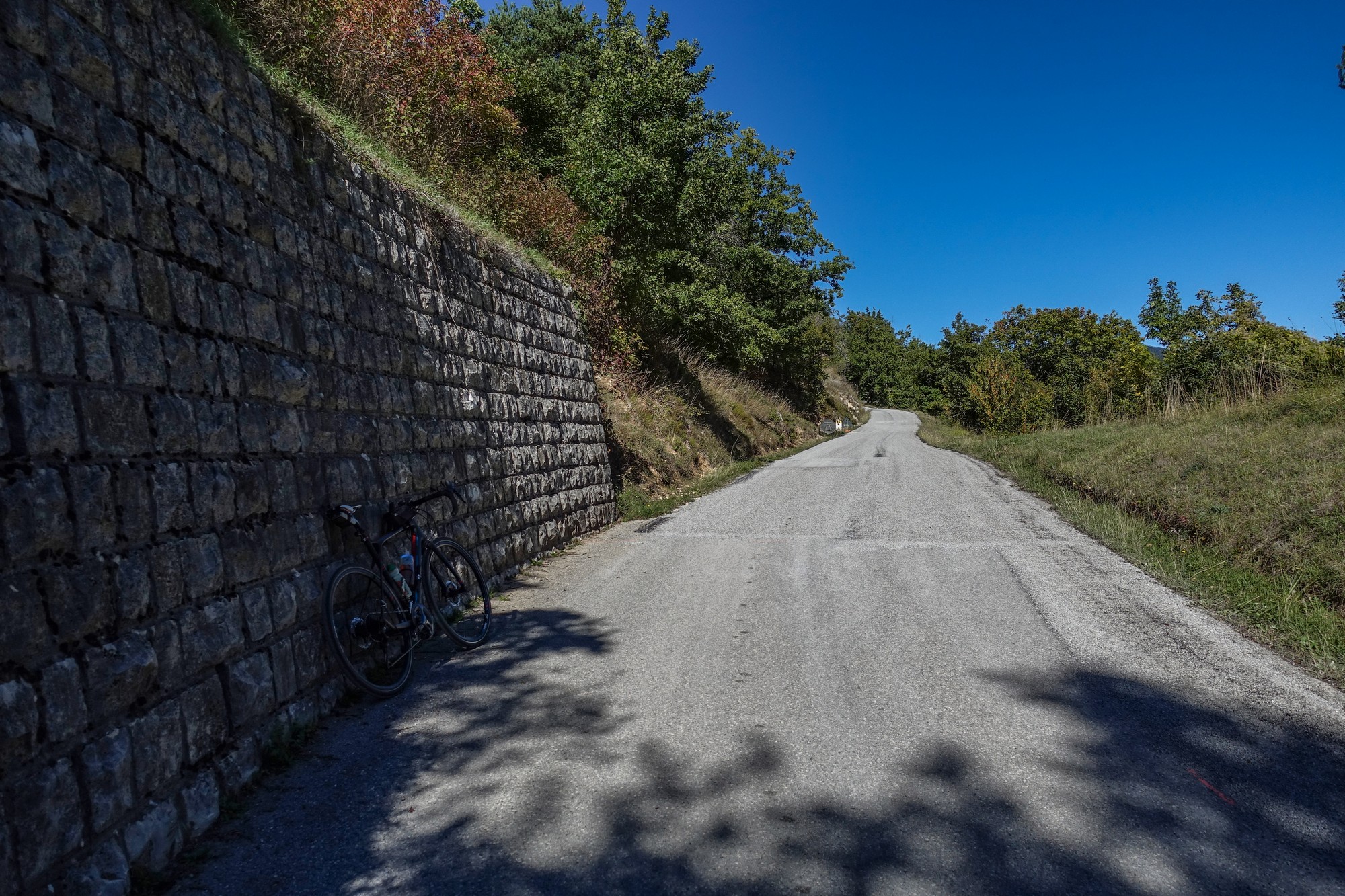 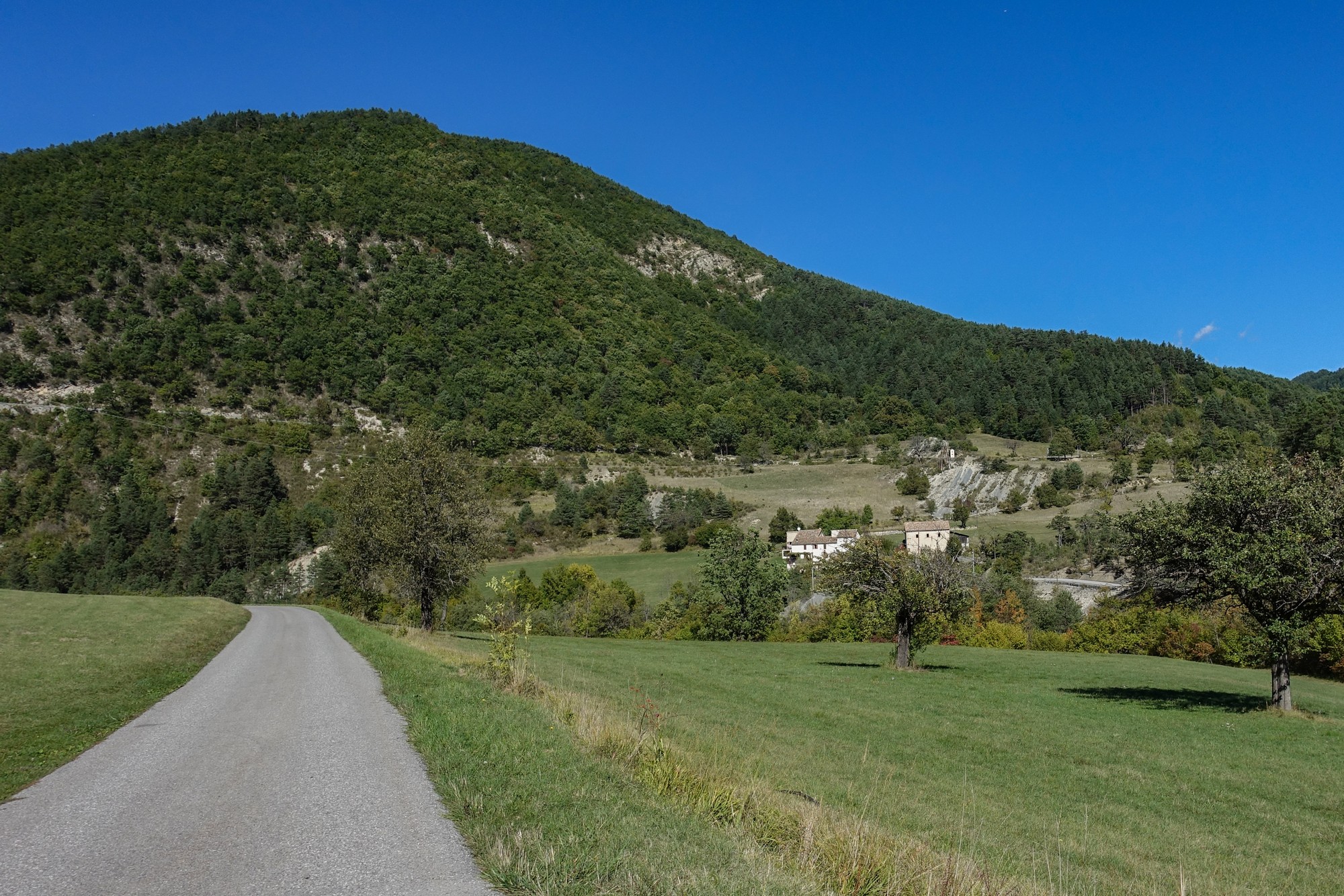 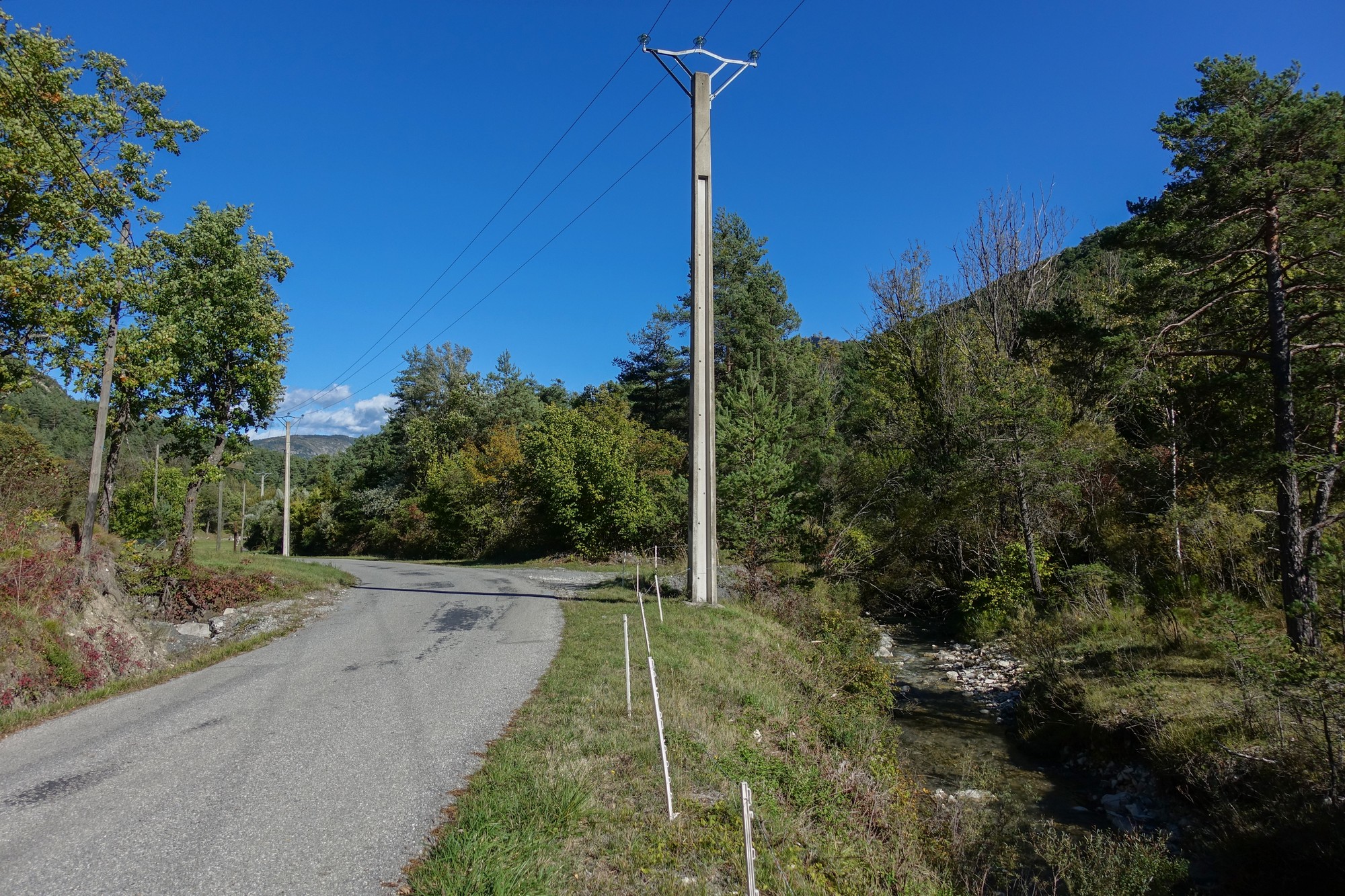 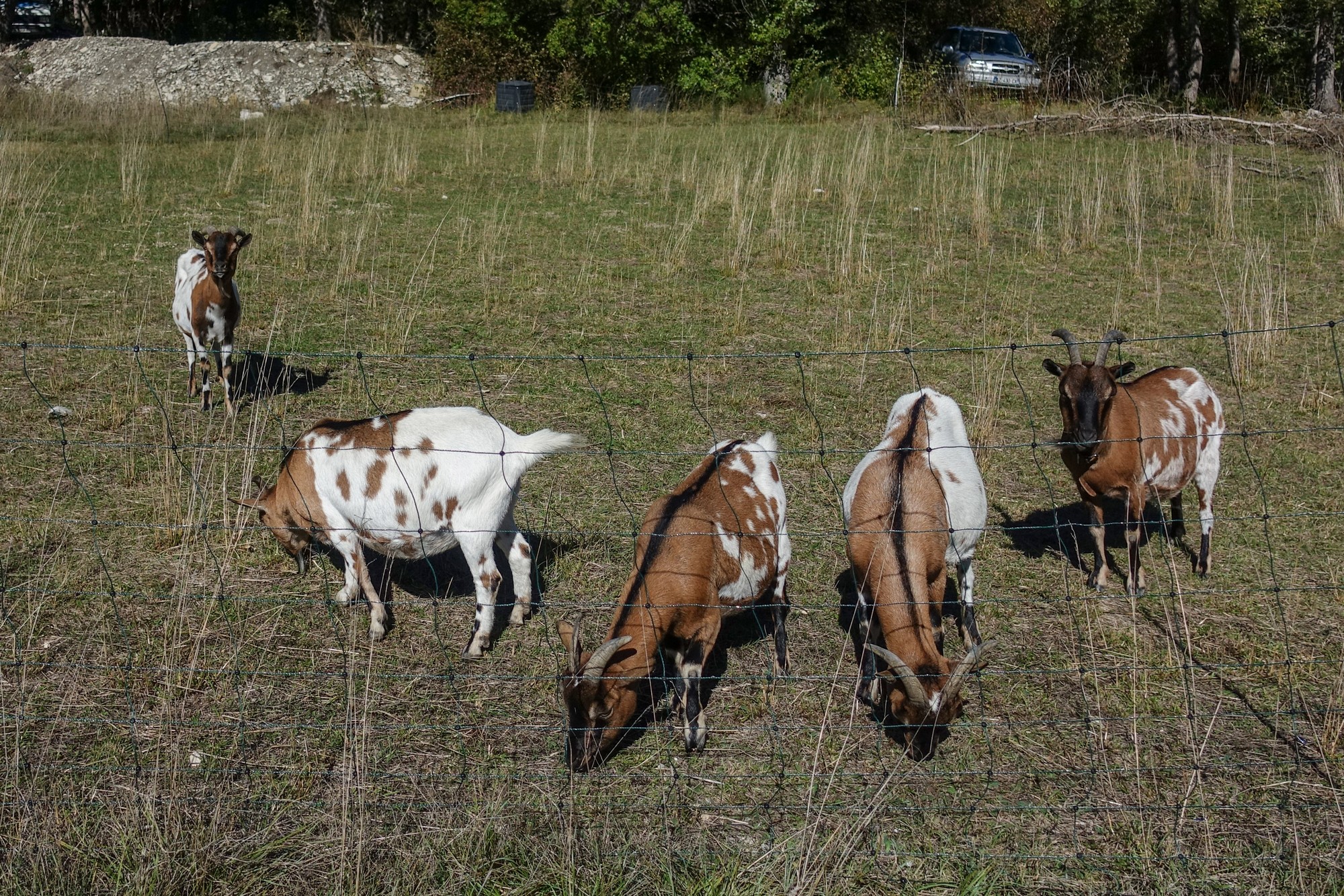 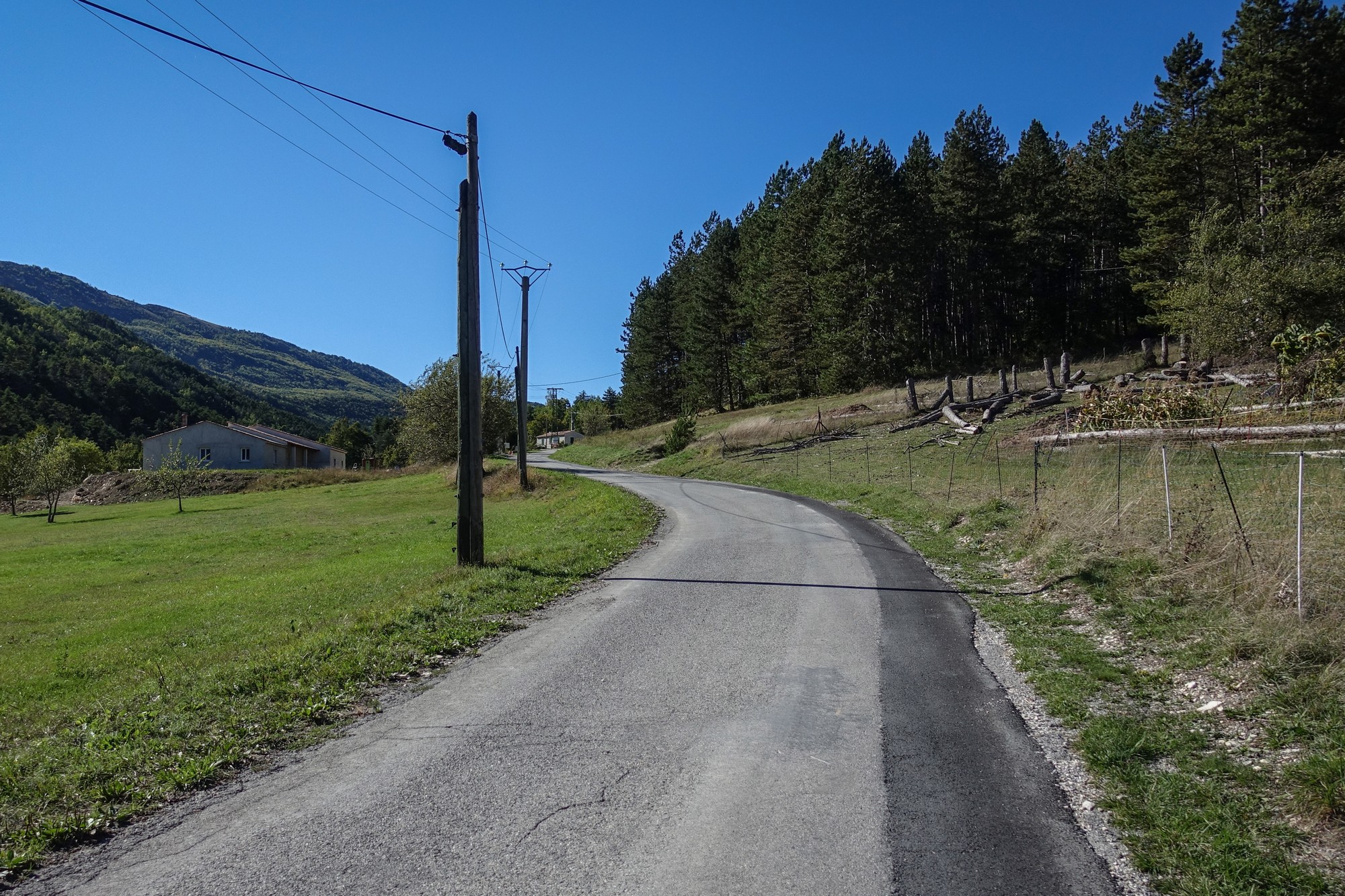 This report coming from the Col de Laval. Since the last report the road has had some significant descents, quite a few flat bits and some small and sharp ramps.

So it’s definitely not a consistent gradient. Some riders don’t like that and prefer a steady gradient, but it doesn’t bother me. I had made a mental note that the climbing was over at 10 miles, and as I was approaching 8 miles I expected some sort of steep climb in front of me, but the road almost just meanders up to the col with no real sense of urgency . The road here goes through much open pasture, which makes a pleasant change from rocks and forest. 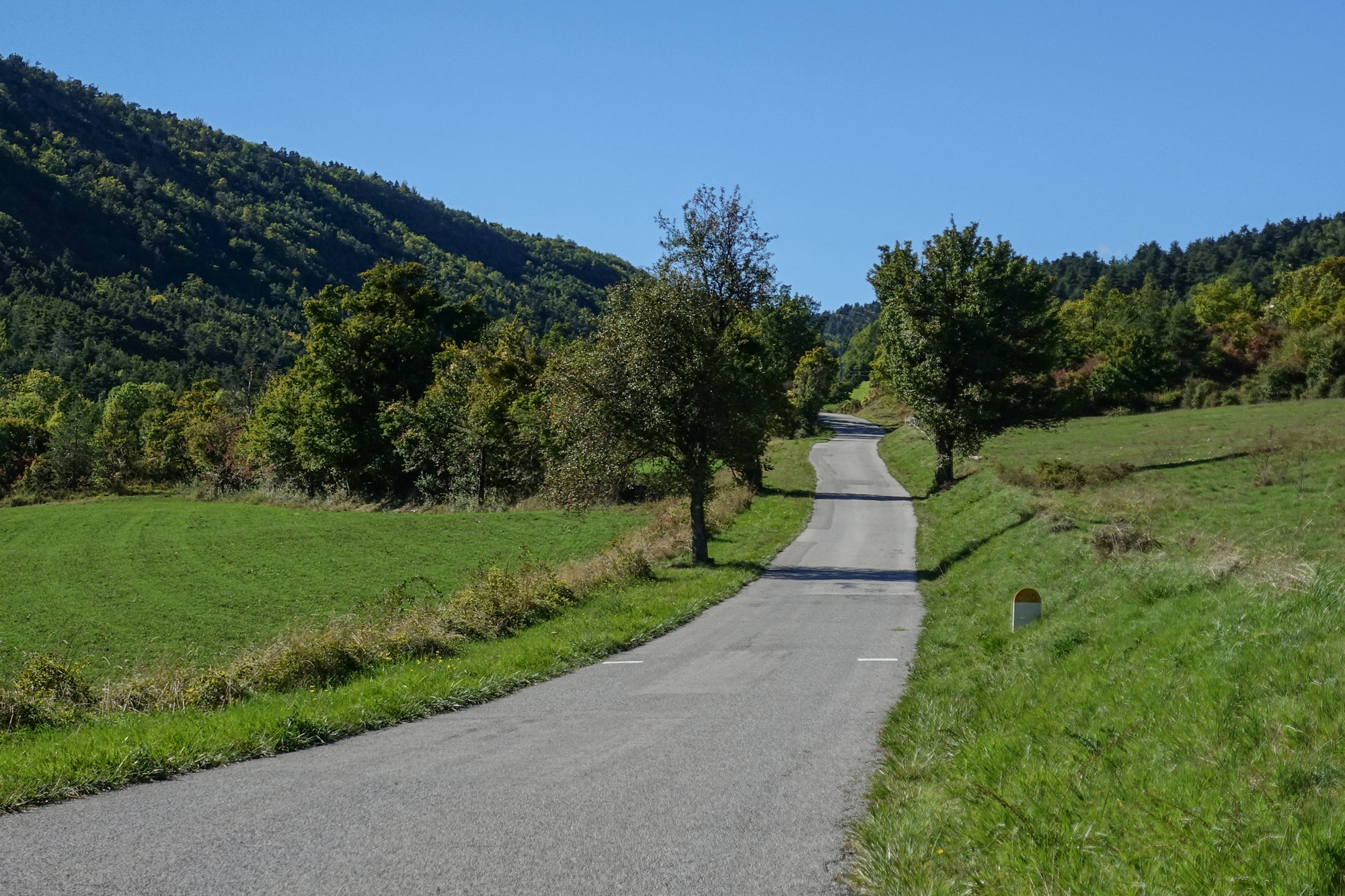 As I  approached the col, I could see that there was like a gap in the hills in the distance and the wind was picking up. These are good signs that you’re approaching the end of the climb.
I  just went over the top of the col past the brow… 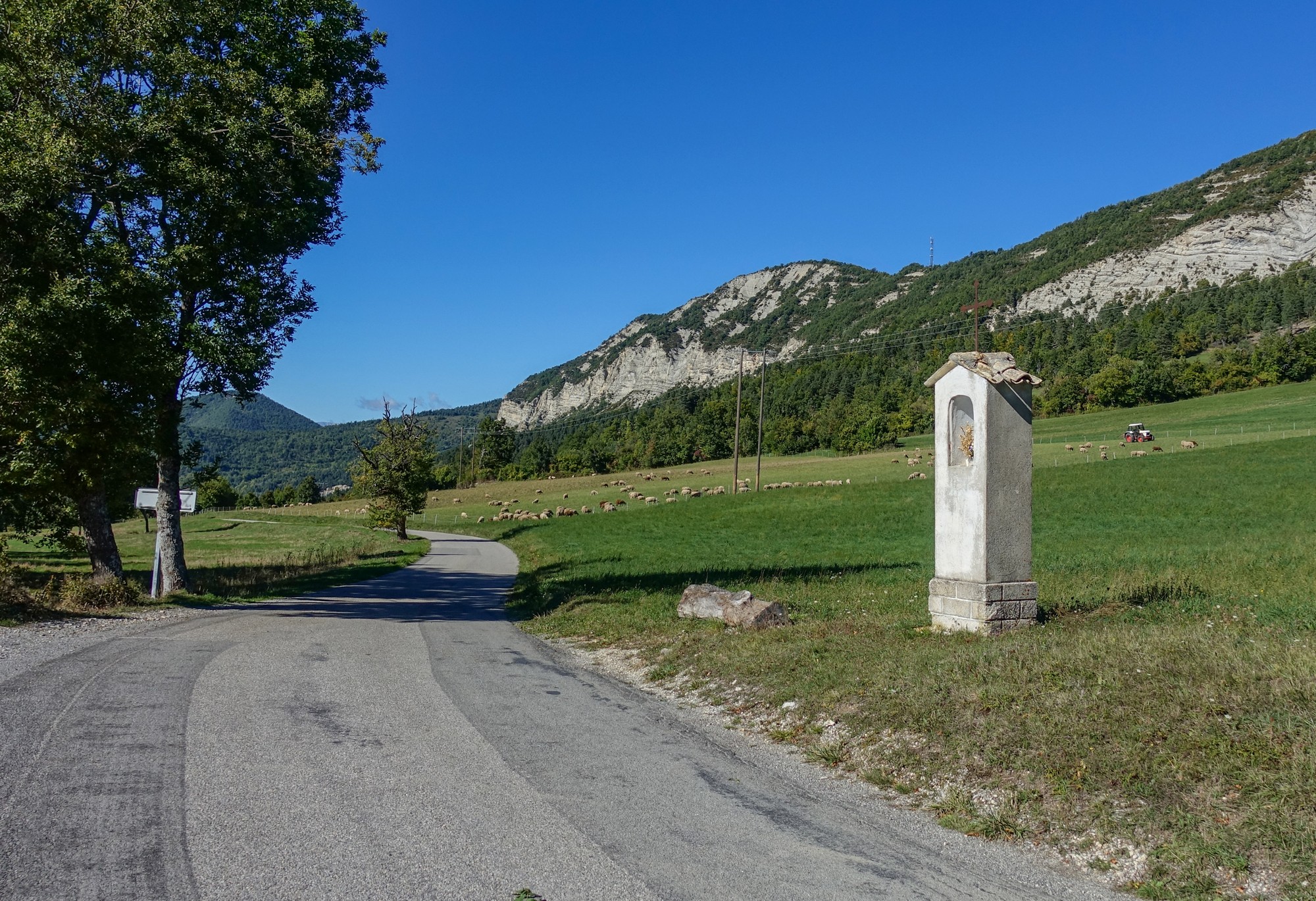 … but it was so windy I could hardly get my rain jacket on, and I had to walk back to the sheltered side to do this report. 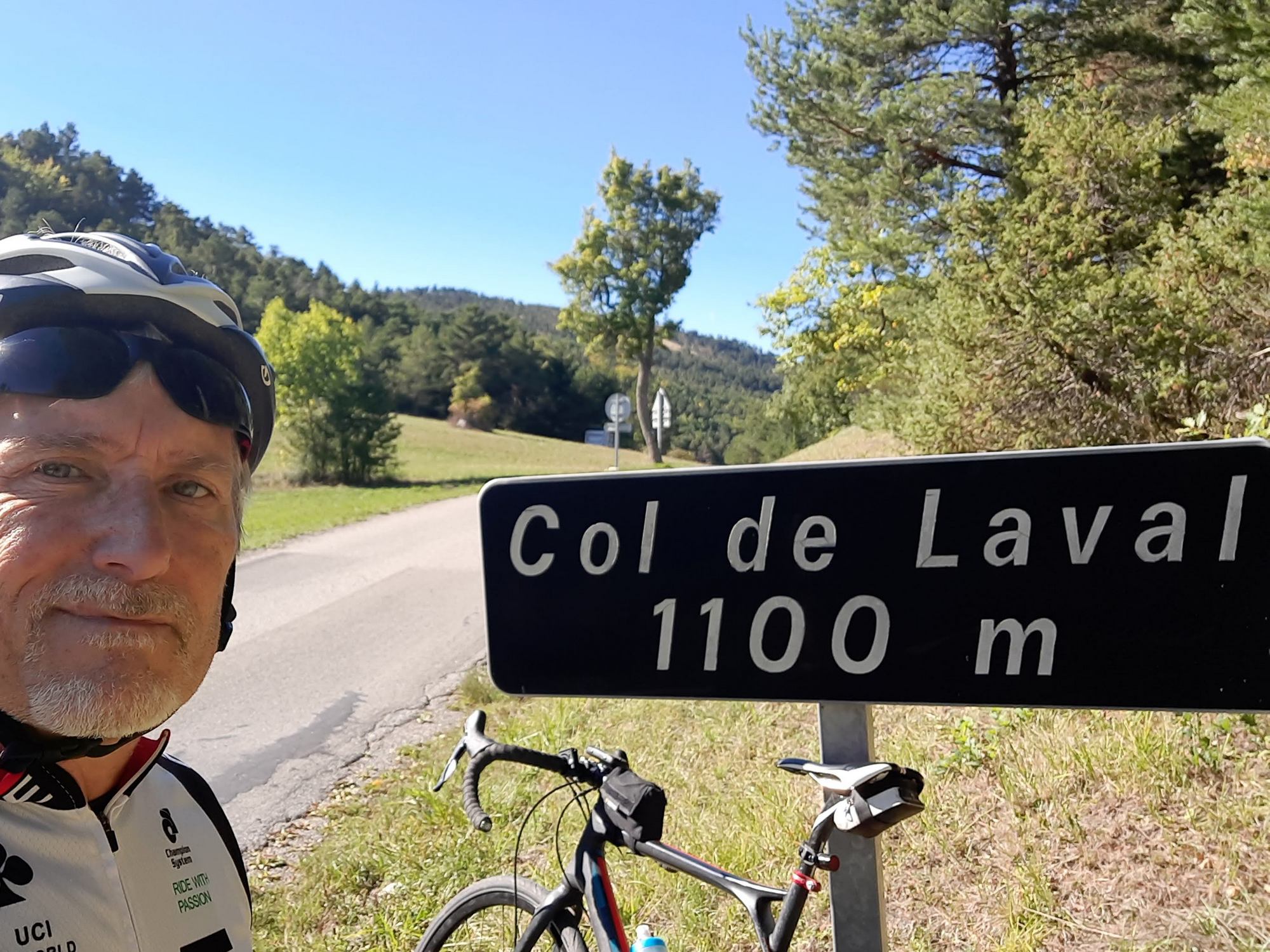 So I have now wrapped myself up with my snood and a skull cap and I’m just going to eat my sandwich before going into what is inevitably going to be a cold descent. As I was standing at the col sign, a local came up behind me almost out of nowhere, and we started chatting. He asked me where I was going. Unable to think of any place names ahead, I said I was heading for the “Route Nationale”, meaning the main road a few miles ahead. He told me that there was a very sharp but short climb just before the main road. This was something I had noticed on the the gradient map. He said it was about 1 km long, which was longer than I had expected. After wishing me good luck he strolled off down the road with his basket and walking stick. 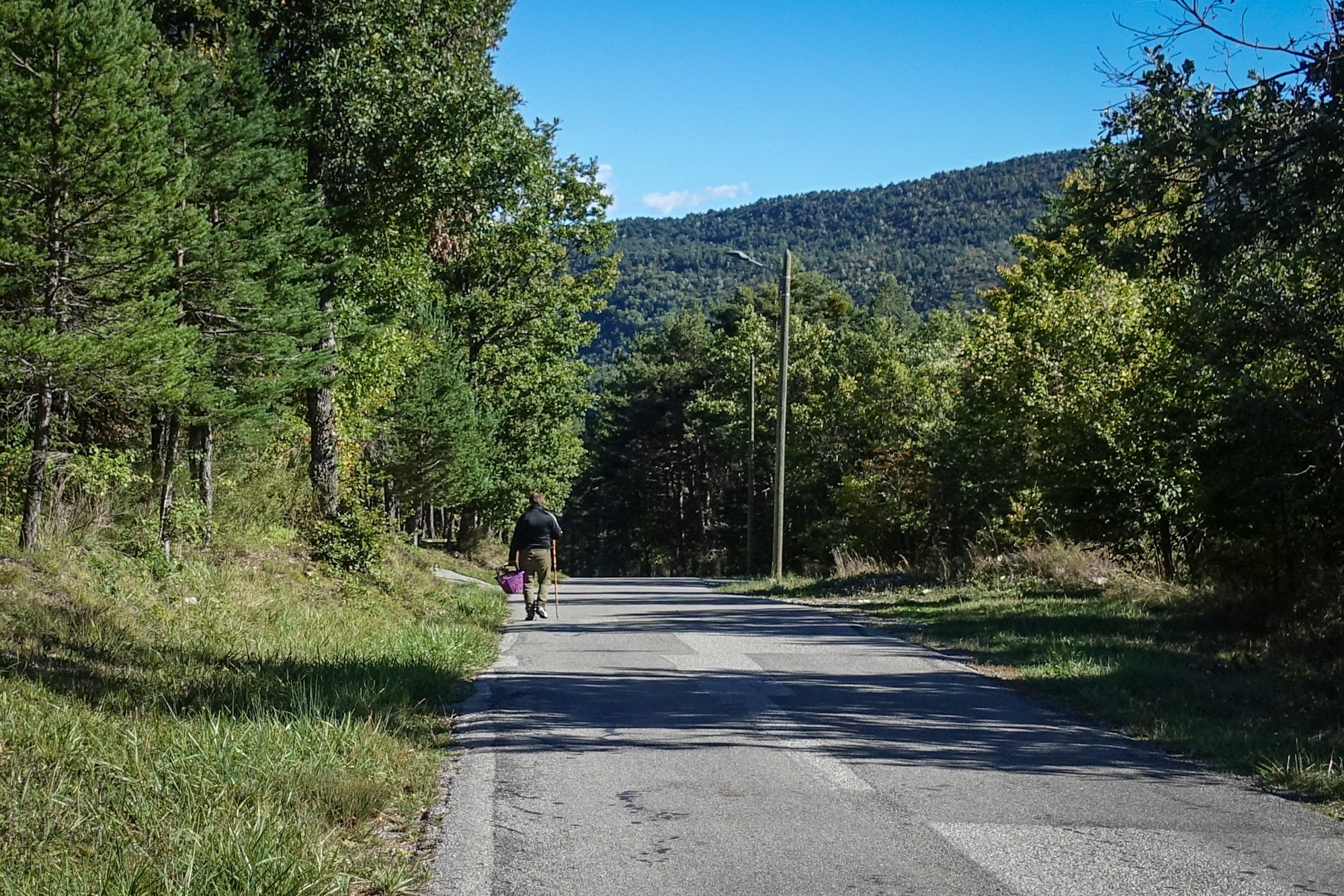 In fact I’ve seen quite a few people with baskets on their arm near woodland lately. I don’t know if they’re looking for truffles – I don’t have a clue actually but that idea just popped into my head from somewhere.

Last report coming from back at van. Descending from the col de Laval was marred somewhat by very strong wind. But it was a nice descent with sections through open pasture and a gorge carved by the the river Bernade. 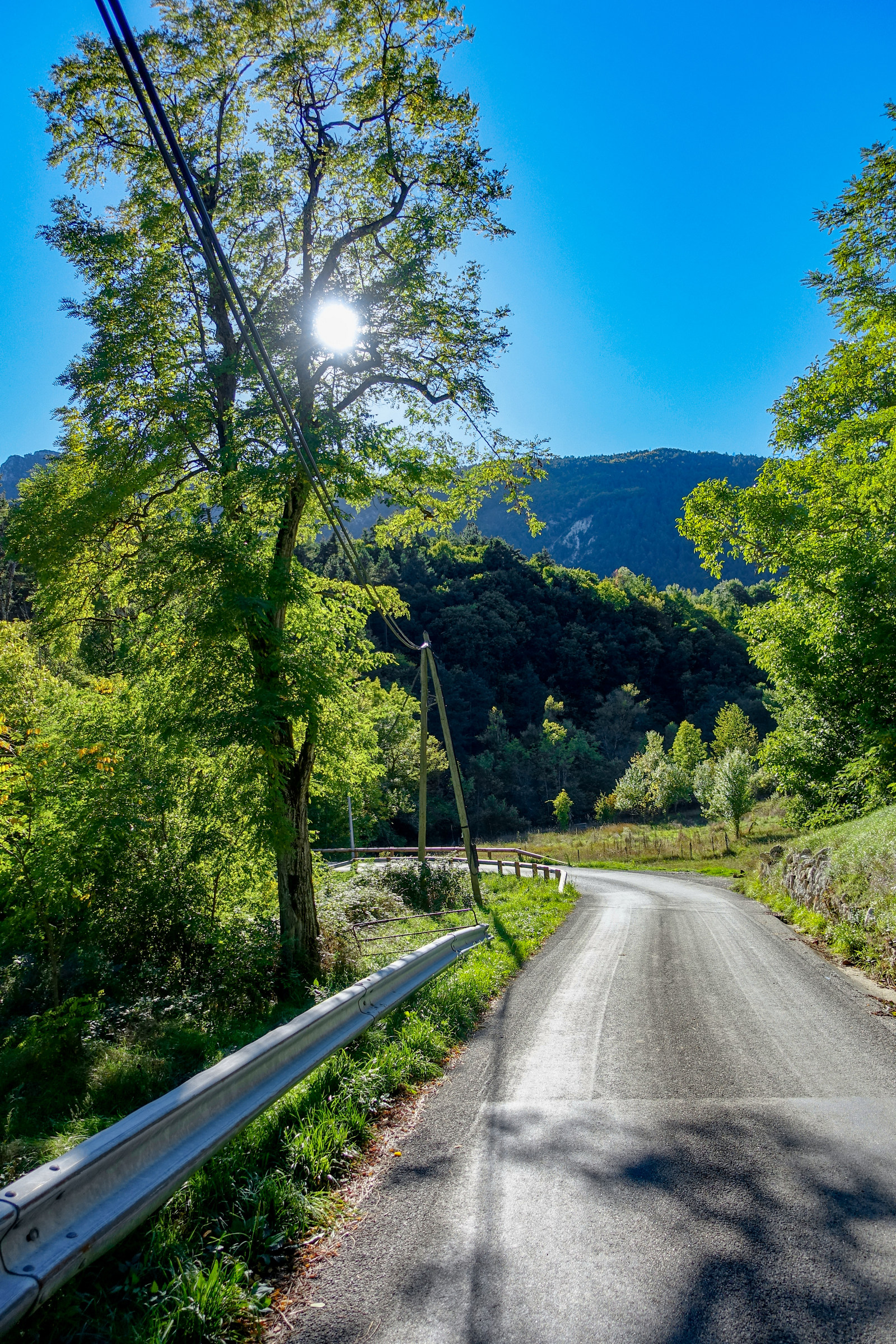 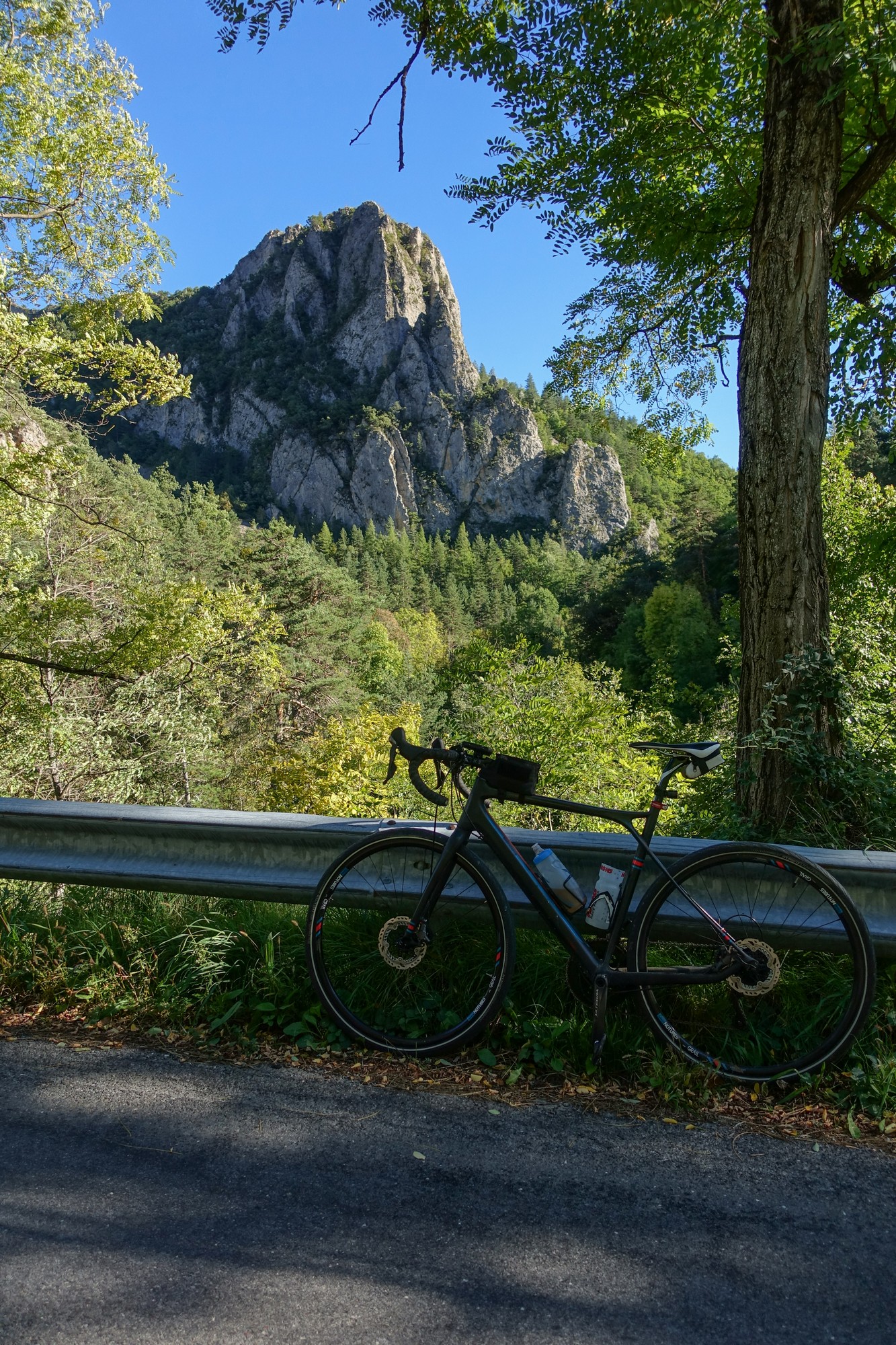 Just over a bridge where the Bernade joins La Galange the road turned and then climbed. This must be the steep bit, I thought. But it was only a few hundred metres and not that steep at all. At the top of this short climb, the road joined the N202. So that was the steep bit he had warned me about – it was nothing really. The rest was downhill on this main road that had hardly any traffic on it. 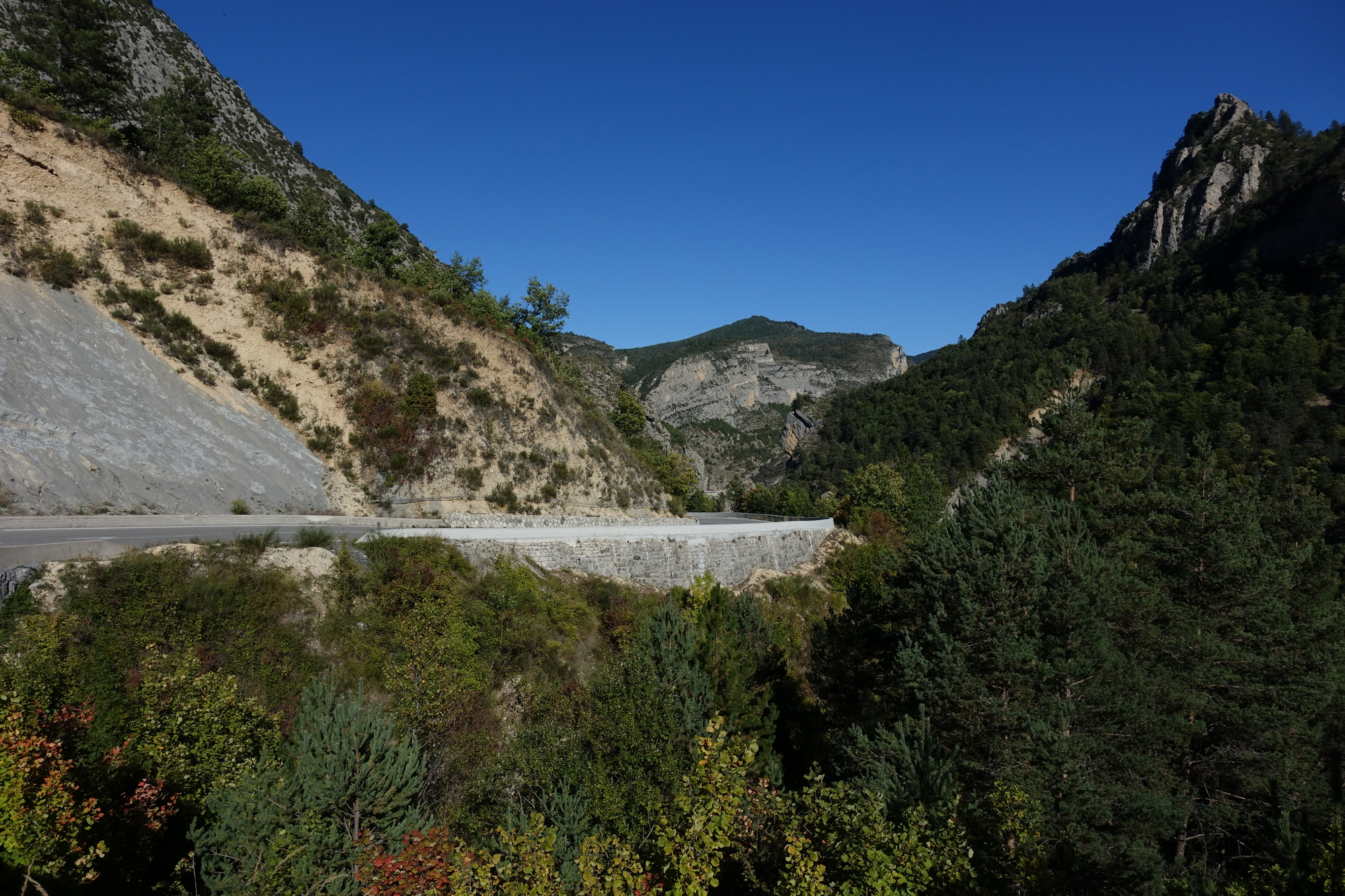 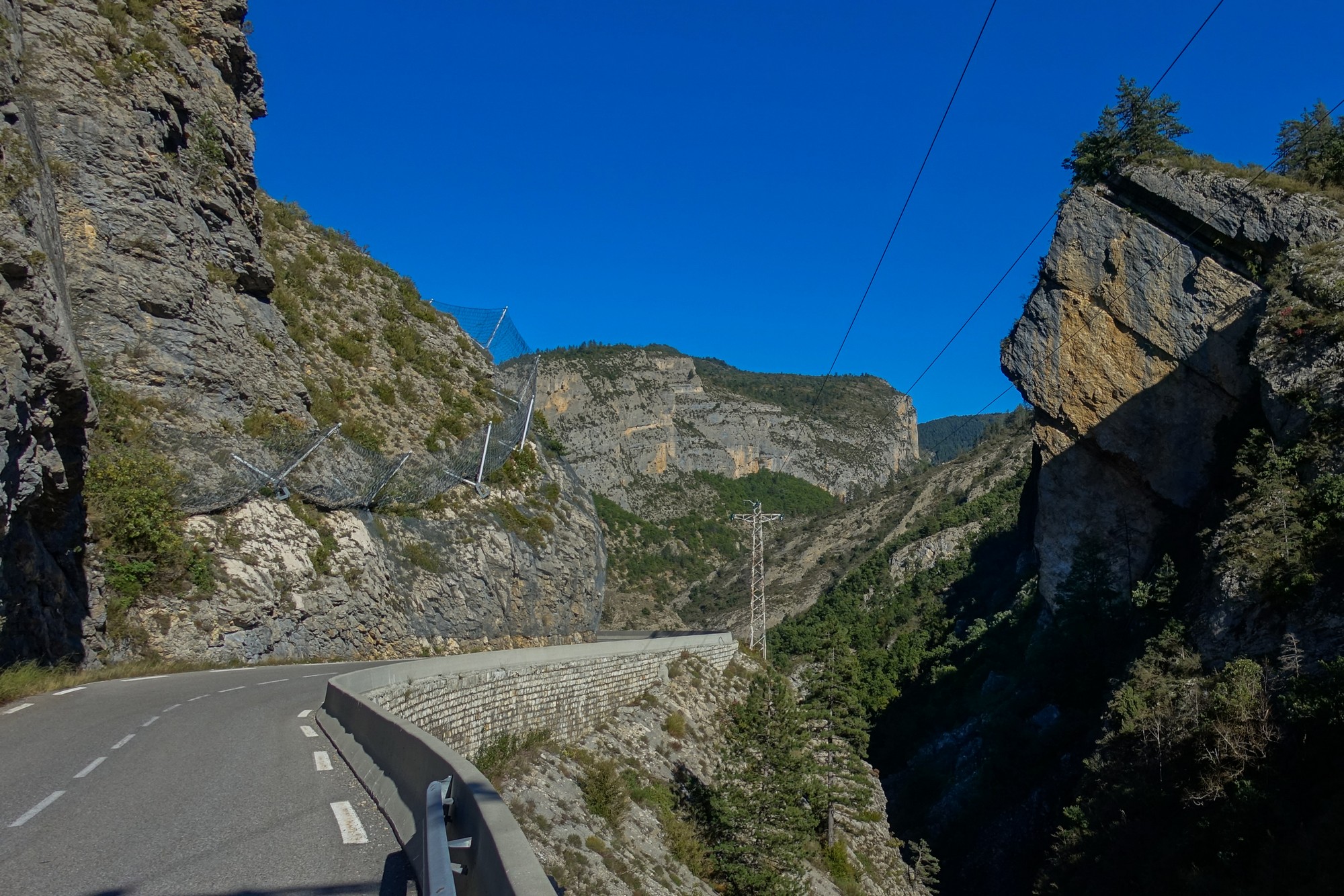 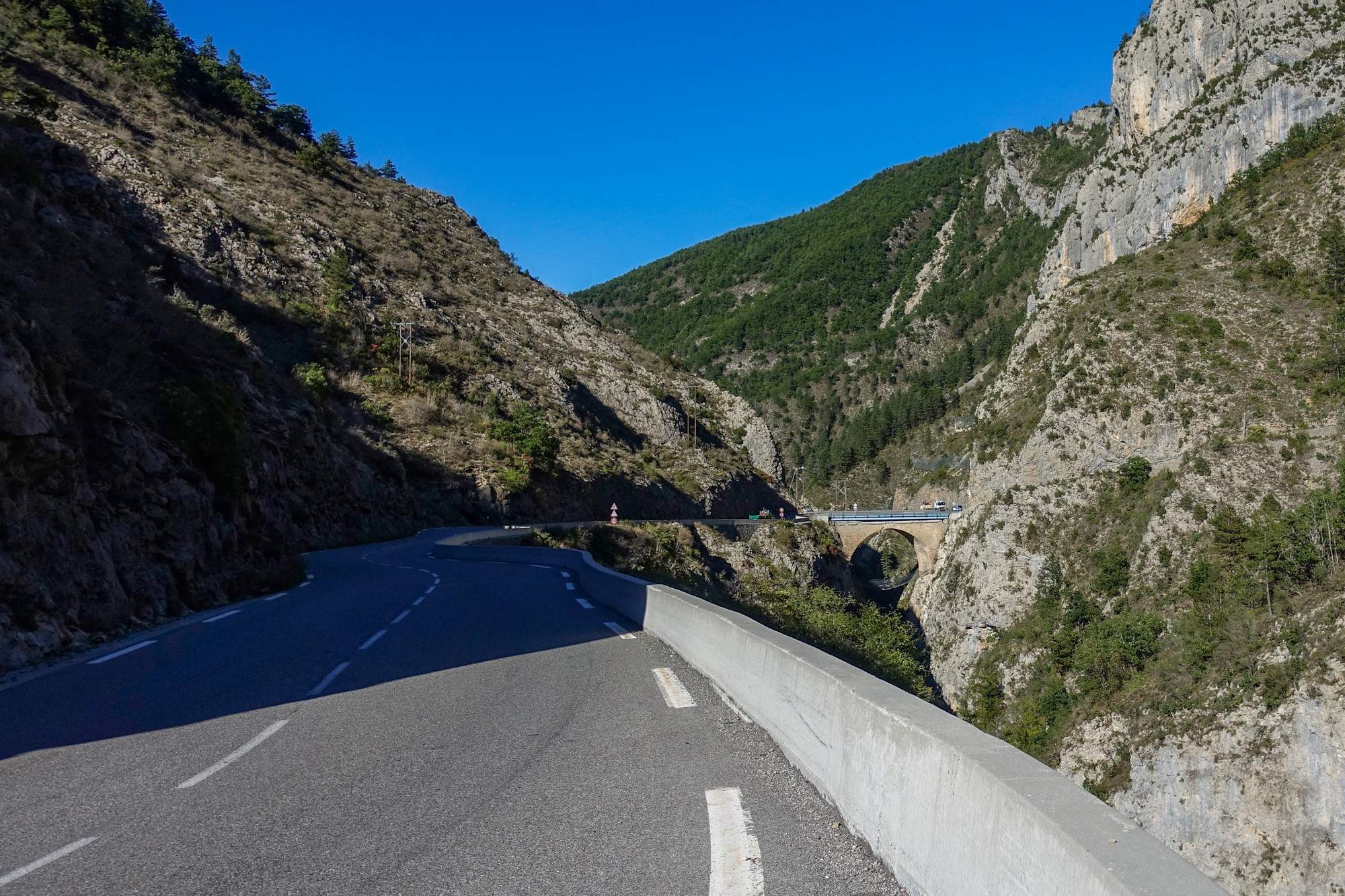 The wind once again took some of the enjoyment out of it, and I kept well away from the edge. The road followed La Galange down to the turn-off for Annot where the river joins La Vaire. Further down the gorge La Vaire joins La Coulomp which in turn meets the river Var near Pont du Geydan. So most of the roads around here follow the paths of rivers which, over millions of years, have done all the hard work of slicing through the rock. Midway down I stopped to look at Pont de Reine Jeanne. A remarkable 17th century bridge that leads to a walk to an abandoned village. 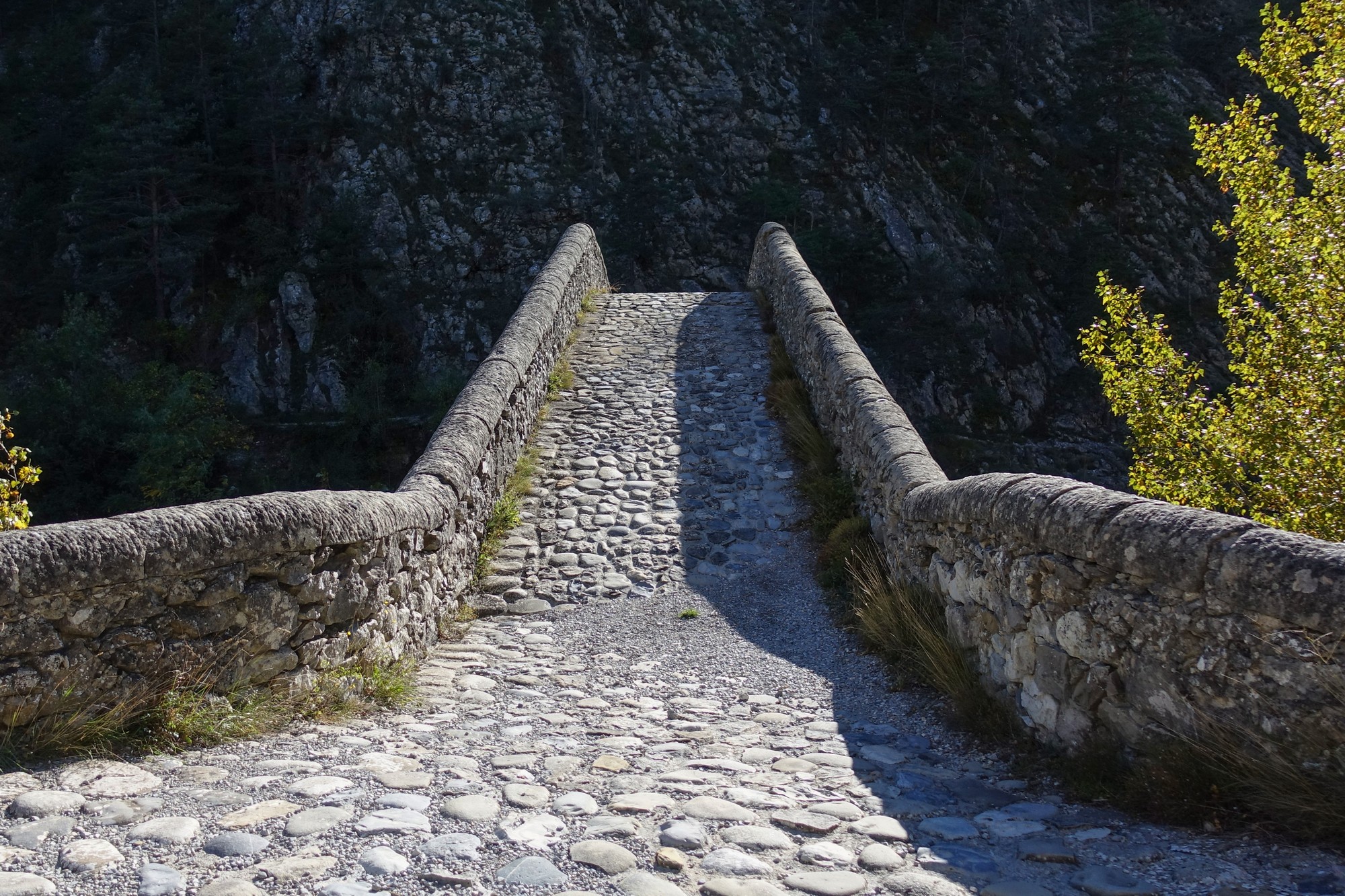 Once the road passed Pont de Geydan I was on relatively familiar territory for the next 3.5 miles back to Entrevaux, passing once again the Elephants of Cornillons ( Les Élephants des Cornillons – see here for more details), which were still standing there bone dry despite the recent very heavy rain.

The ride along the main road was quite fast as the wind was behind me. I got back around 5pm. That’s another little section of this area ticked off my list.