I had planned another route for today that would have taken in an interesting gorge but the weather didn’t look like it was going to be sunny so I didn’t think the photos for the blog would be very interesting so when I found out that tomorrow will be sunny I decided to do that ride tomorrow. So I planned another ride into the hills between Entrevaux and Puget-Théniers. When I saw that there was a westerly wind today, I reversed my planned route. That meant I had a slight downhill and a tailwind for the first 4.5 miles of the ride. As usual, I dictated reports into my phone at various points: 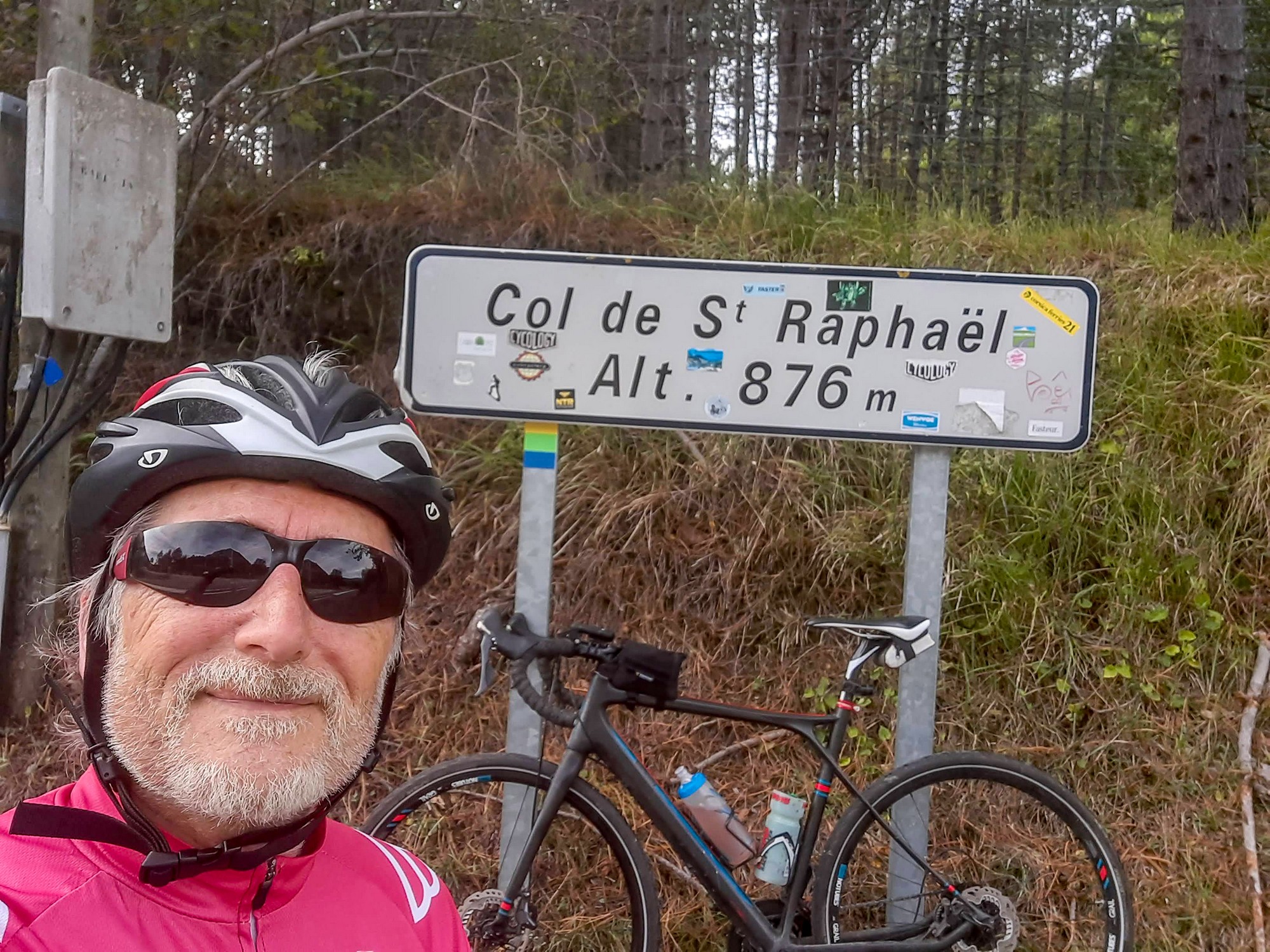 Even after the massively heavy rain last night, The Var didn’t look particularly perturbed by it although it was flowing faster than I’m used to seeing it.

I did the whole of the climb to Col de Saint-Raphaël in one go. That’s 5 miles at 6% in 45 minutes. It didn’t seem too bad – I was in 3rd and 4th gear. The wind was behind me on some of the sections and obviously against me on the others, between switchbacks.

This report coming at 17 miles. This morning had been quite sunny but it has clouded over now.  Col de Saint-Raphaël was followed by an amazing descent that seemed just to go on and on, so much so that I was worried I’d lost all the elevation I had worked so hard for. 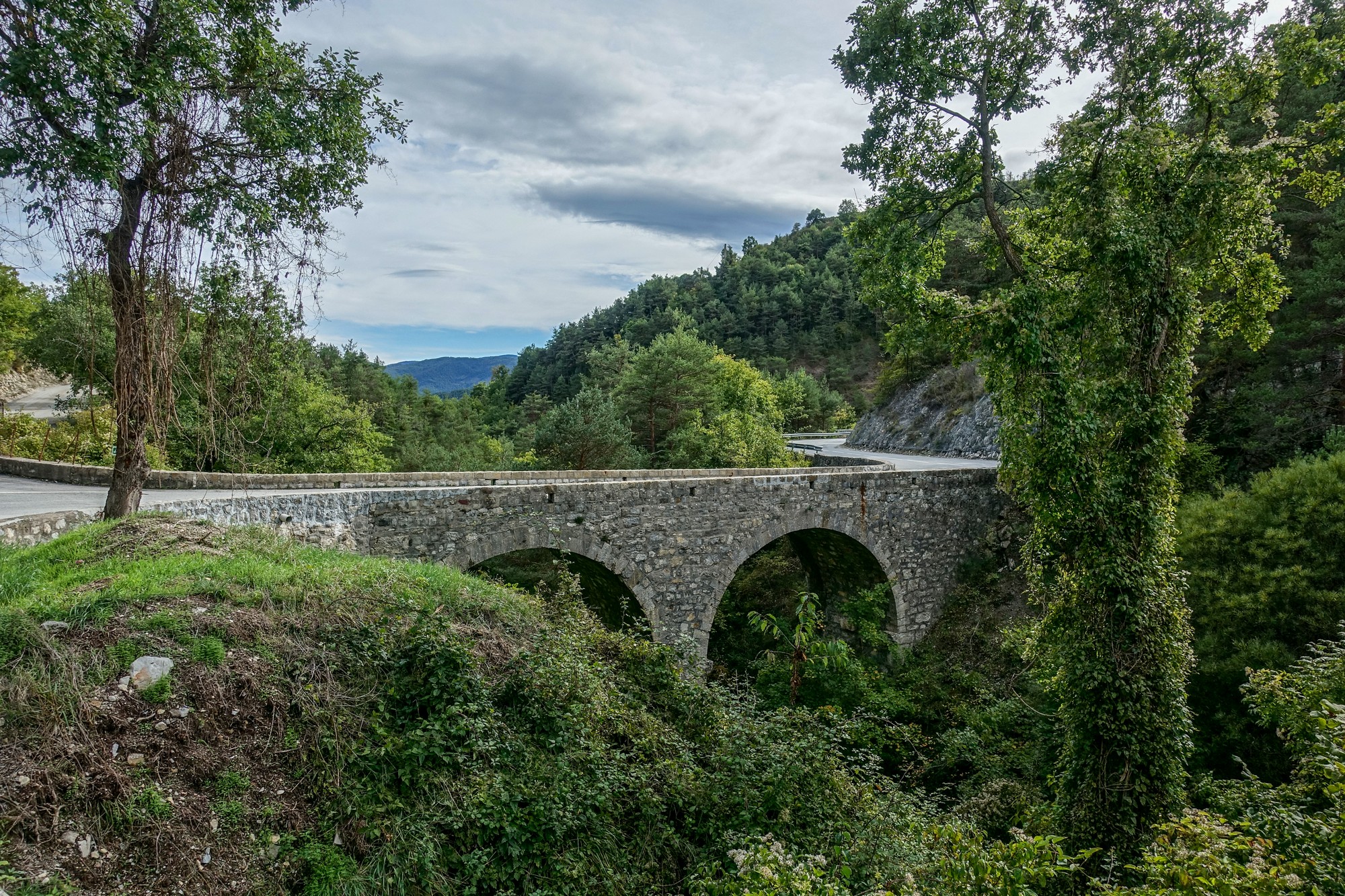 The road went through various villages that I recognised from previous rides. The sheepdog wasn’t happy when I stopped to get a photo of La Penne – just doing his job though. 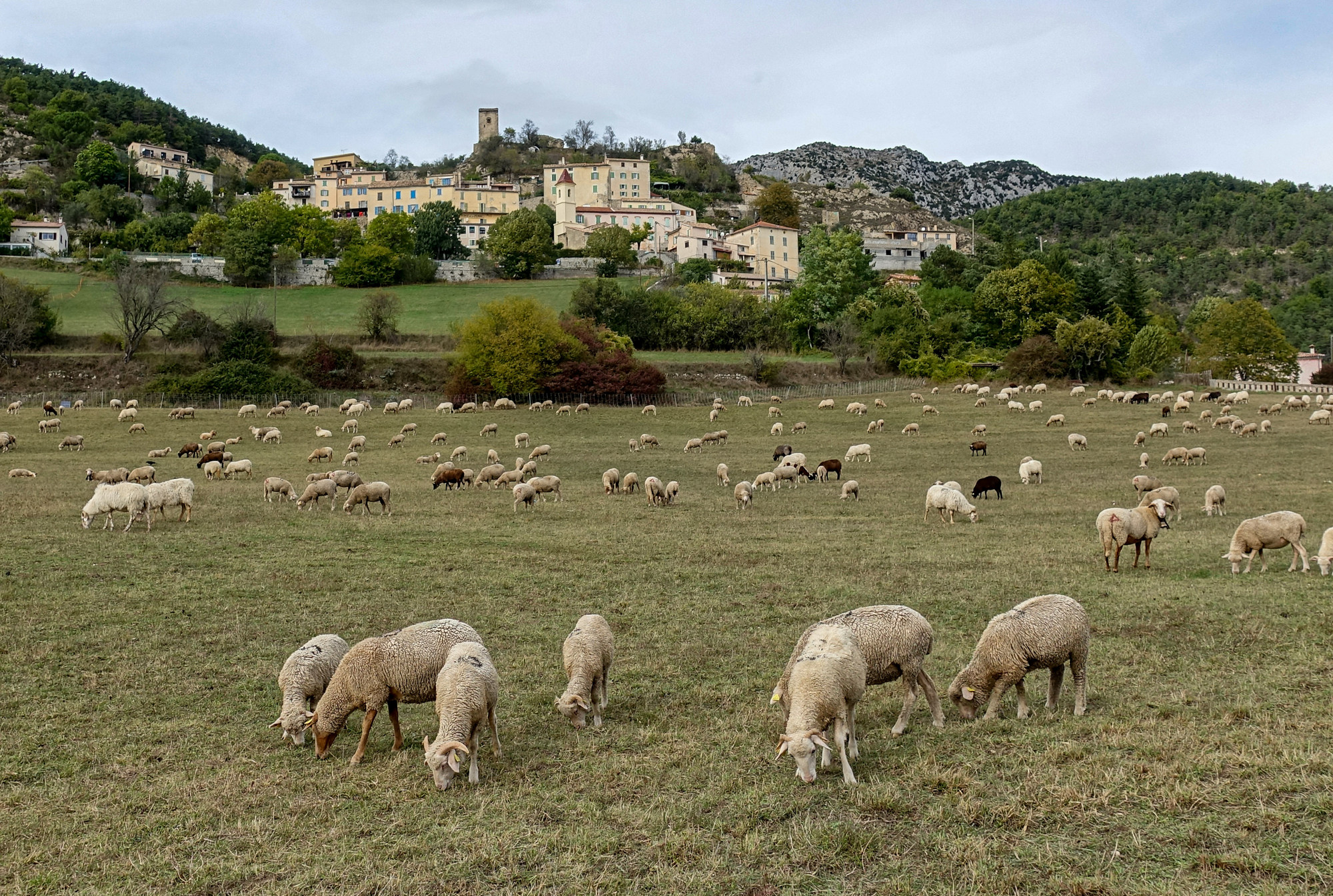 For the past couple of miles I’ve been on an ascent but not really too bad in terms of gradient, but I’m certainly out in the middle of nowhere on a back road that no one seems to use use except workers logging in the forest and the odd homestead. 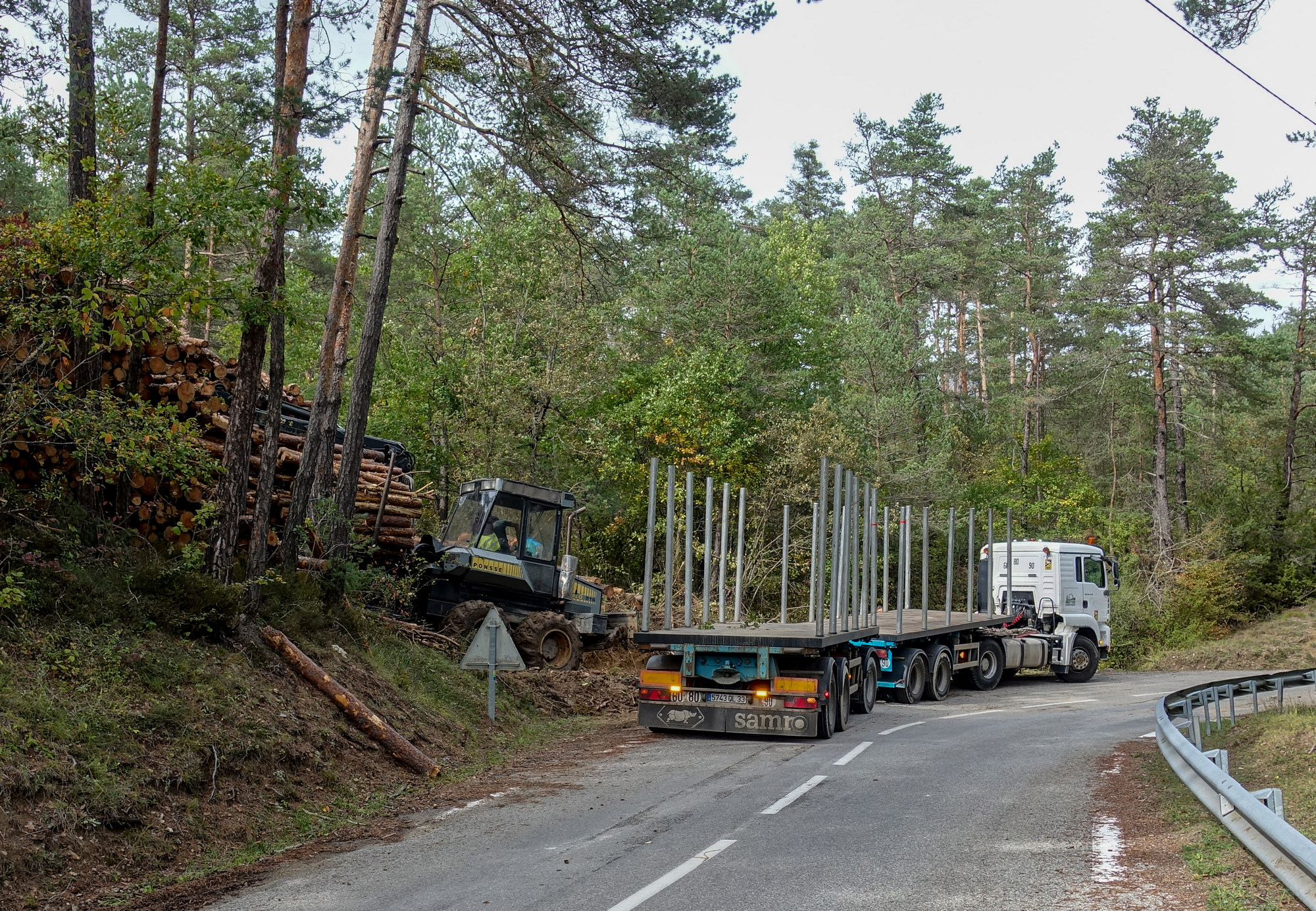 I’ve just had my half a peanut butter sandwich. 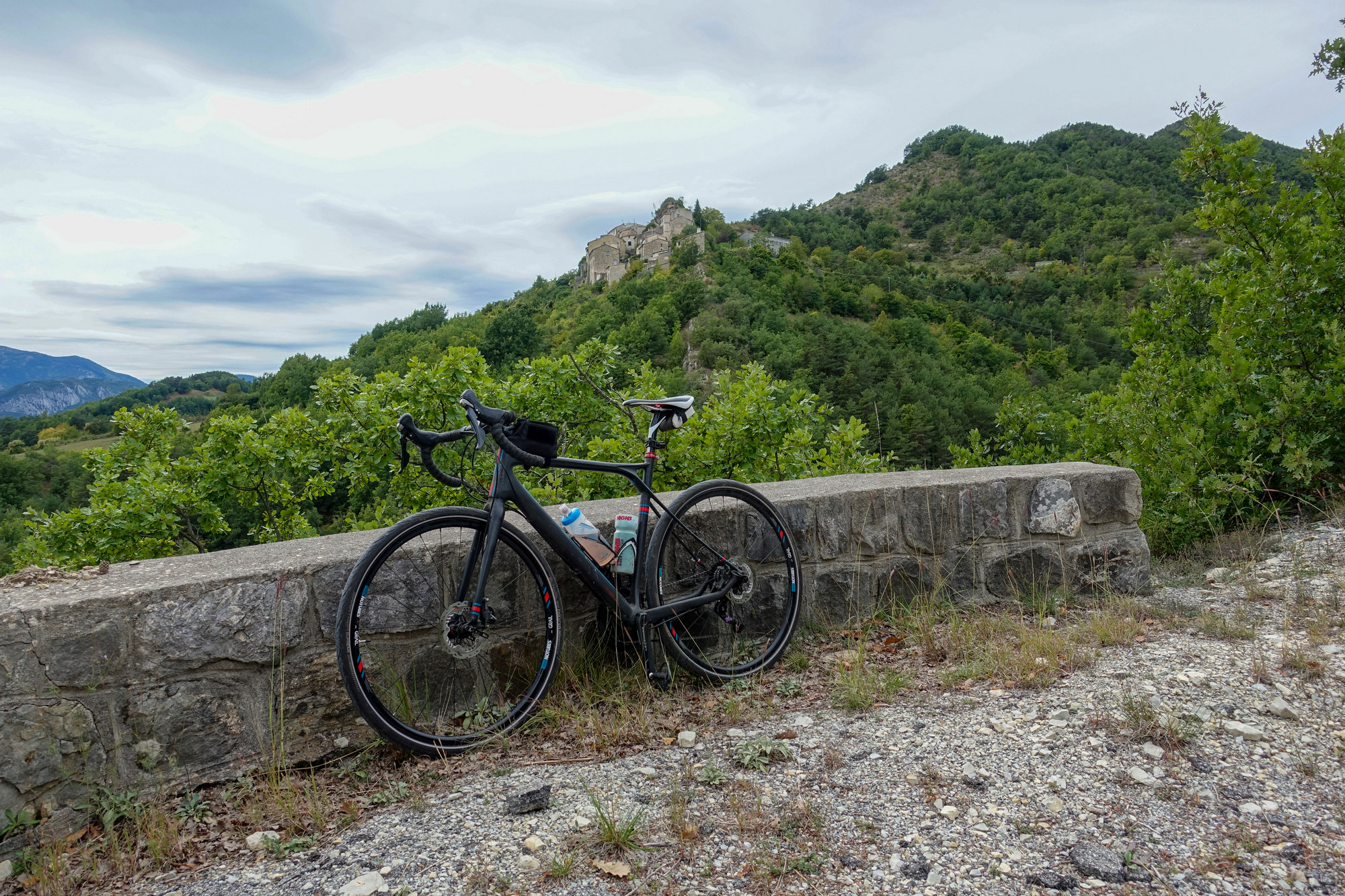 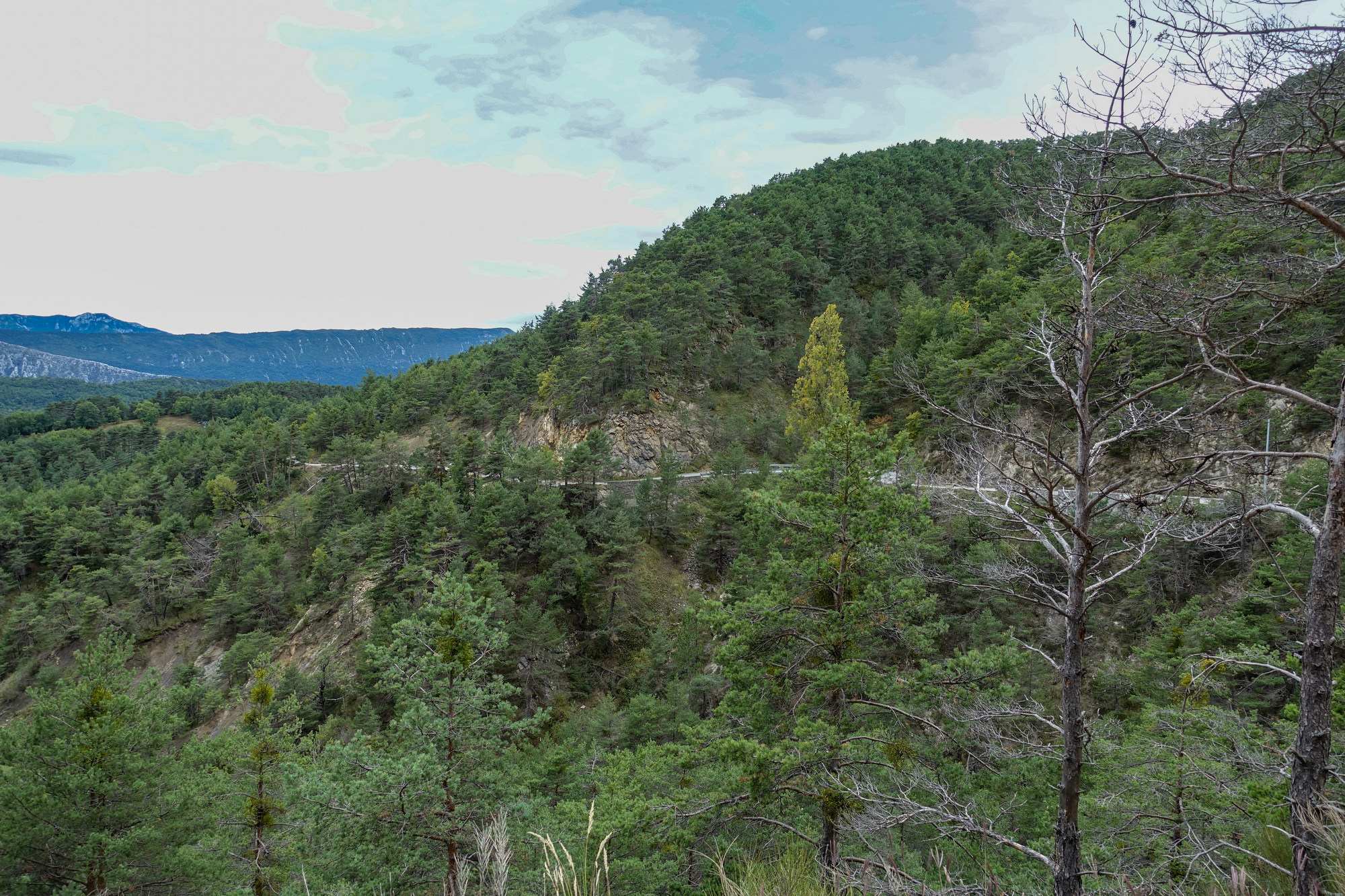 Report from back at base. The weather today had been mid to high teens earlier – when I got back it was 14 degrees. The climb to Col du Trébuchet seemed to go on and on, but at reasonable gradients. There was loads of evidence of last night’s torrential rain with rocks strewn all across the road at various places – some of them quite large, like a foot across. I wouldn’t fancy driving a vehicle through them. 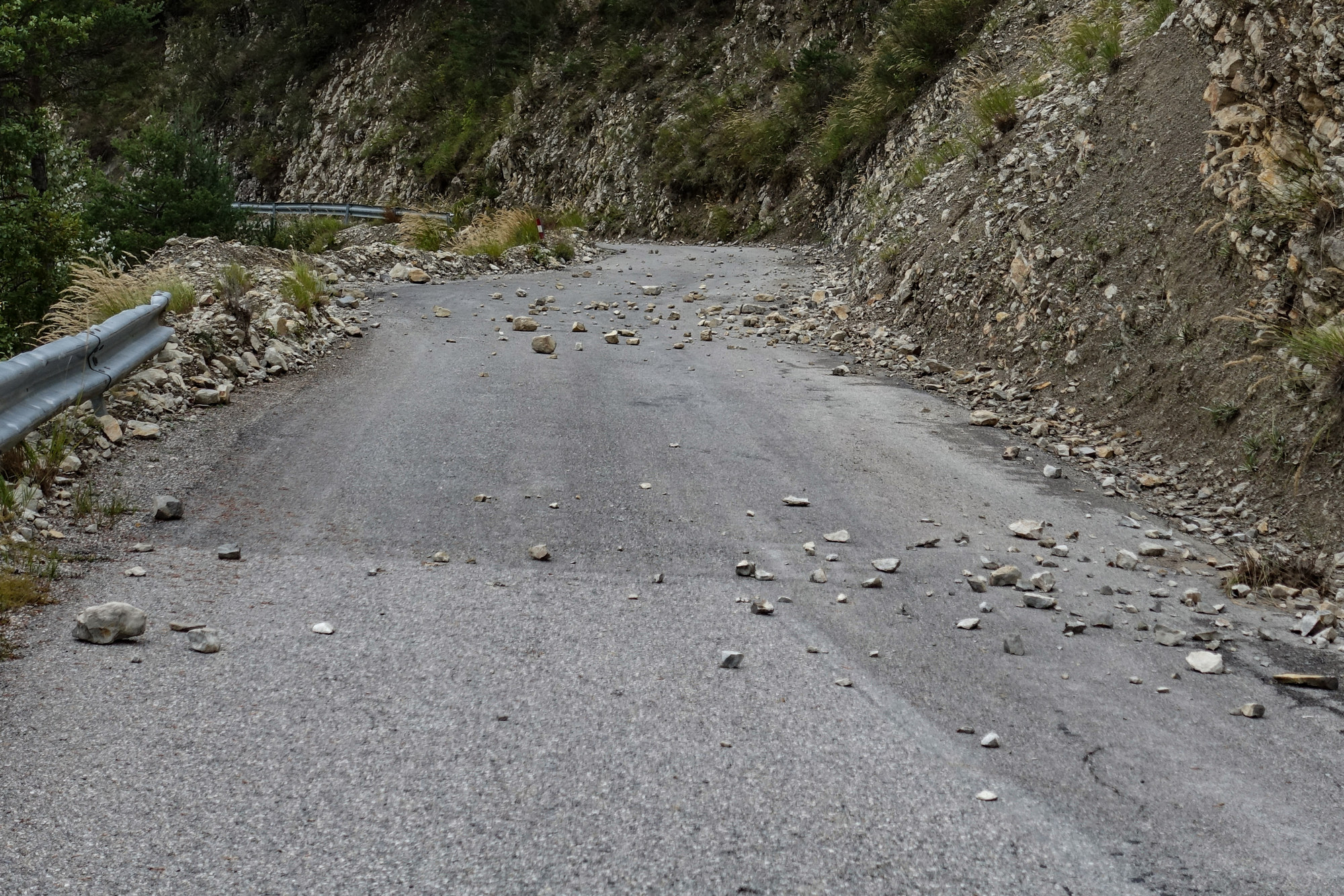 I knew when I was approaching the col because the wind picked up and I could see a mobile phone mast ahead and I thought that’s bound to be the highest point. And it was. 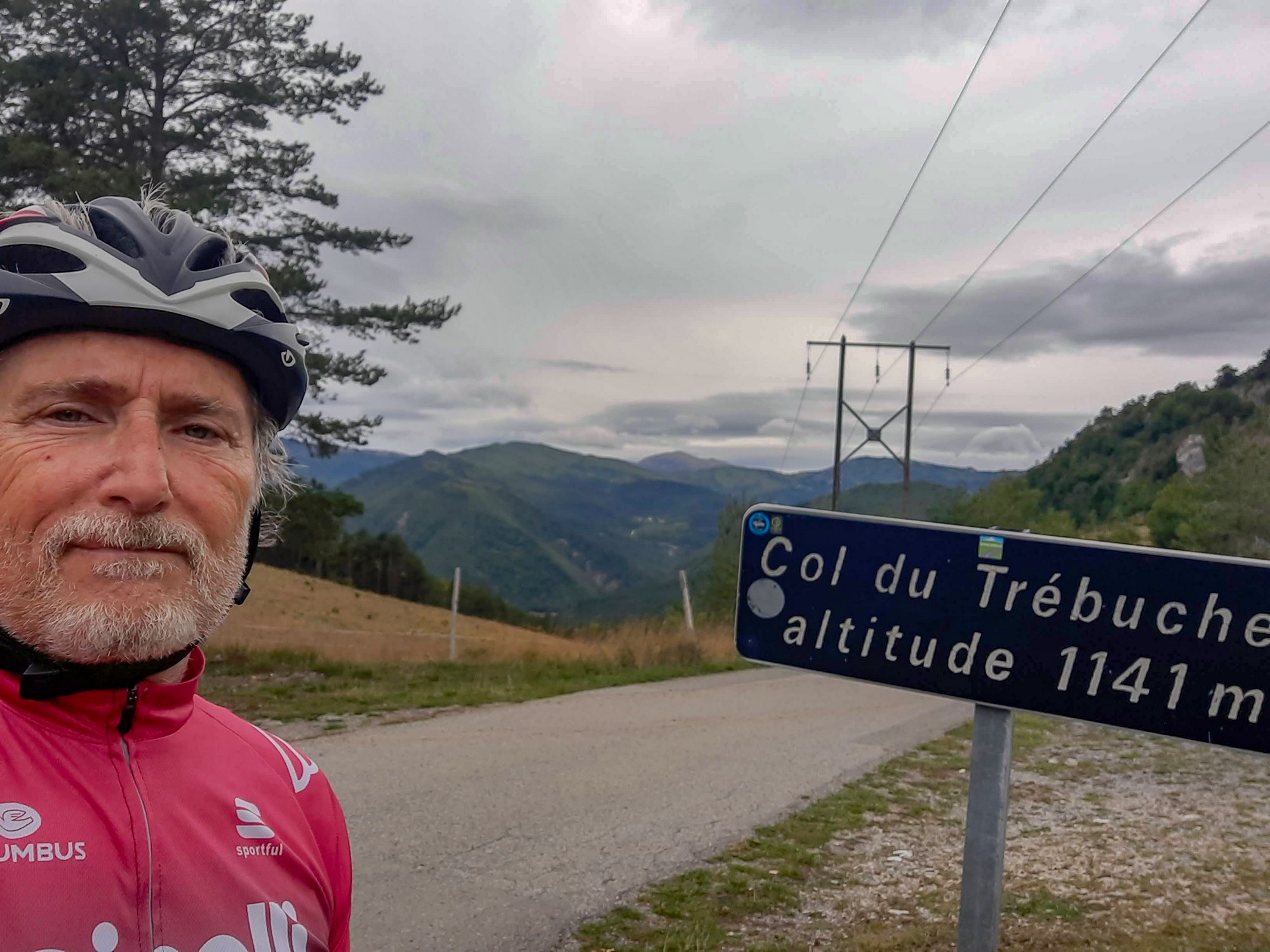 After I took the col photo, I was pleased to find out that when I got my raincoat out, wrapped up in it were my snood and skull cap. So I put all that gear on and started the descent. And that was miles of great descent… 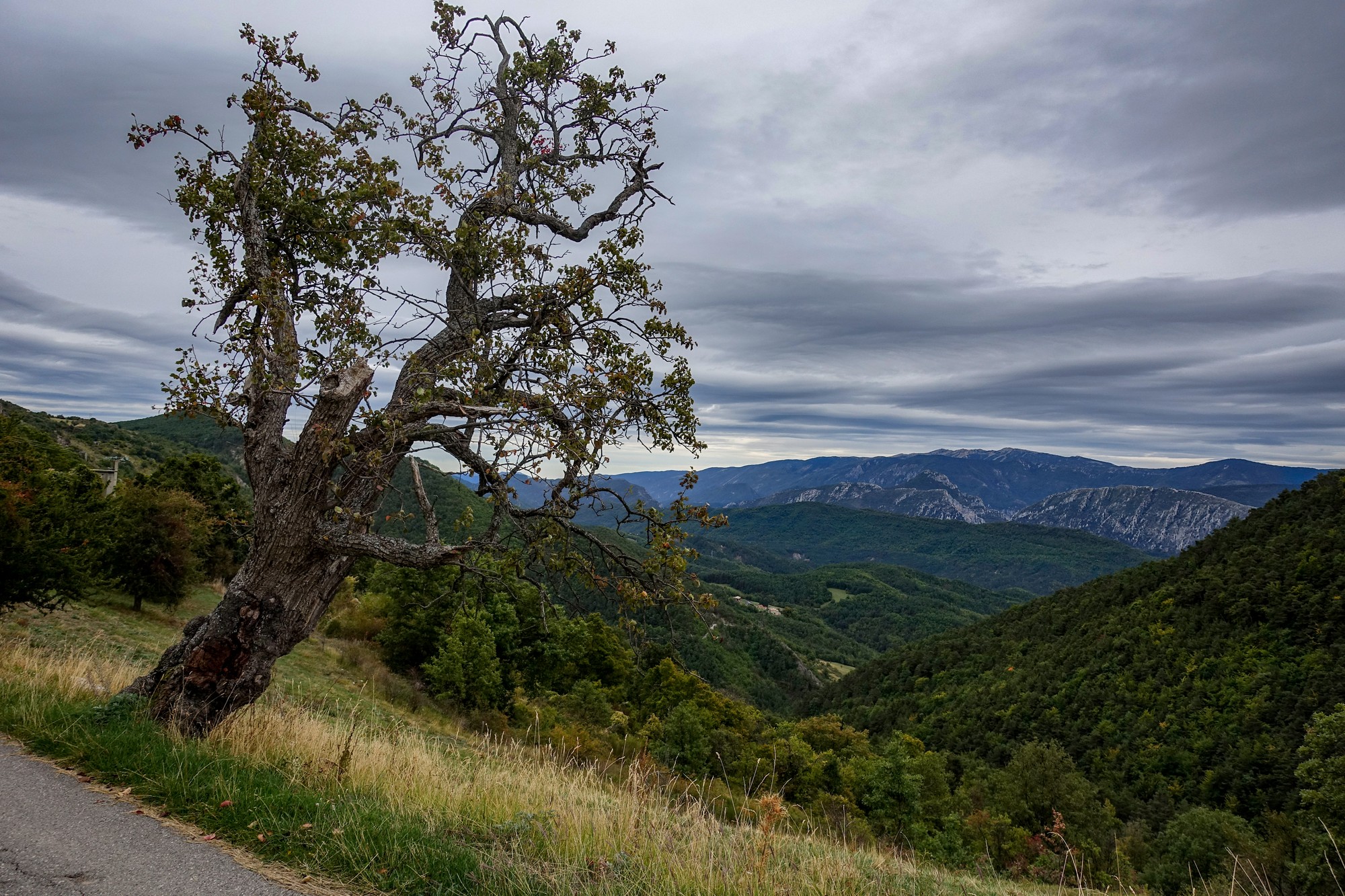 …until somewhere where the road kicked up again for a while until I reached Col de Félines. 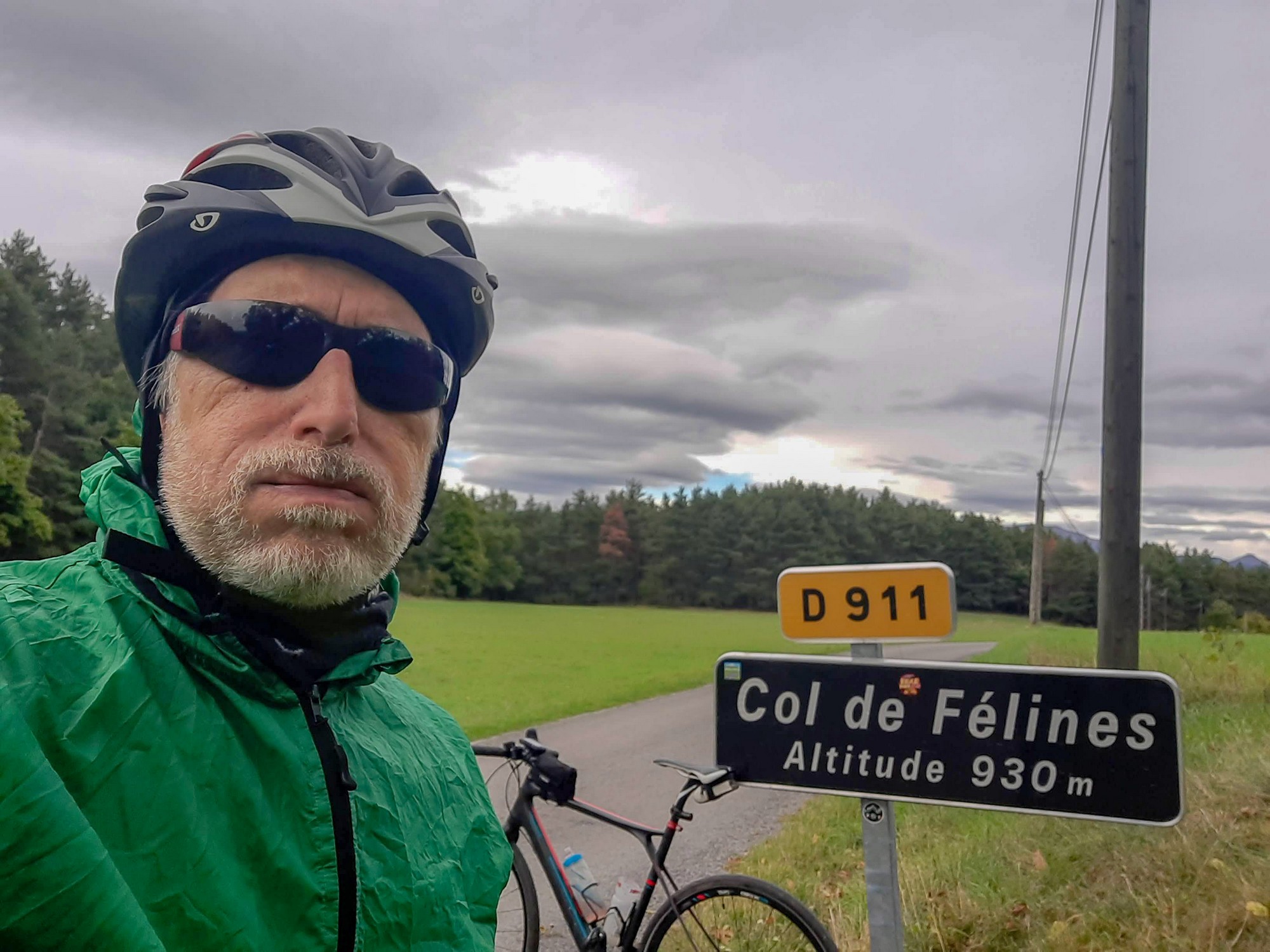 Then it was definitely all downhill from there – so many miles of descent and with that view of Entrevaux citadel drawing the eye on each view of it. 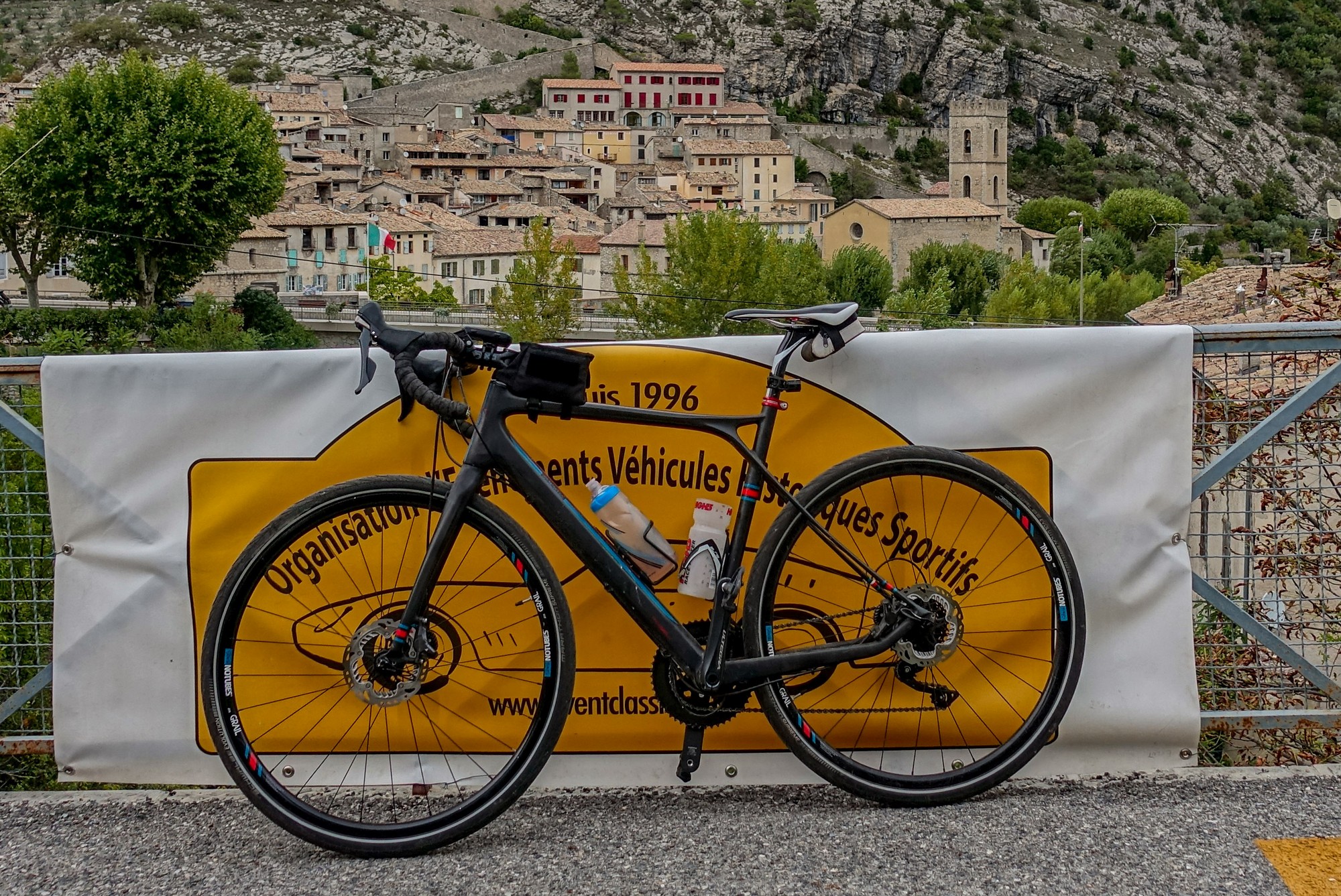 I got back feeling quite tired. The weather was cold and grey and I think that had sapped some of the enjoyment from the ride. Still an amazing route though!