There were thundery showers in the forecast for today, but that’s not unusual, and it often comes to nothing, so I thought I’d see how far I could get towards Col de l’Iseran, even though I knew it was closed. I was hoping for a road without too much traffic.

The air is quite cool today which is a welcome change, and I don’t feel myself having to stop because I’m too hot, but I’m managing to keep warm enough just by the effort. There have been a couple of descents getting here so far which is a bit of a shame because that will be effort required on the way back

In contrast to previous rides, I actually don’t want to stop because I start to feel too cold.

At around about the six-mile point, there was hold-up with traffic and I couldn’t see exactly what was going on but when I went past a parked service vehicle and some workers, I saw a section of the armco had been flattened almost to the ground. I can only assume there had been a (large) rock fall, but when I looked down the slope I couldn’t see any massive boulders.

At another point workers were deliberately dislodging overhanging rock at the side of the road, presumably before it fell down of its own accord.

Three cyclists have gone past me, one wearing AG2R Mondiale kit and two other riders wearing Cofidis kit.

Only now and again have gradients been a slog. There has been quite a lot of flat and, as I say, even downhill. I’ve been keeping my eye on the weather both ahead of me and where I’ll be returning back to in Bourg-Saint-Maurice. The heavy clouds over the mountains look like they may be clearing 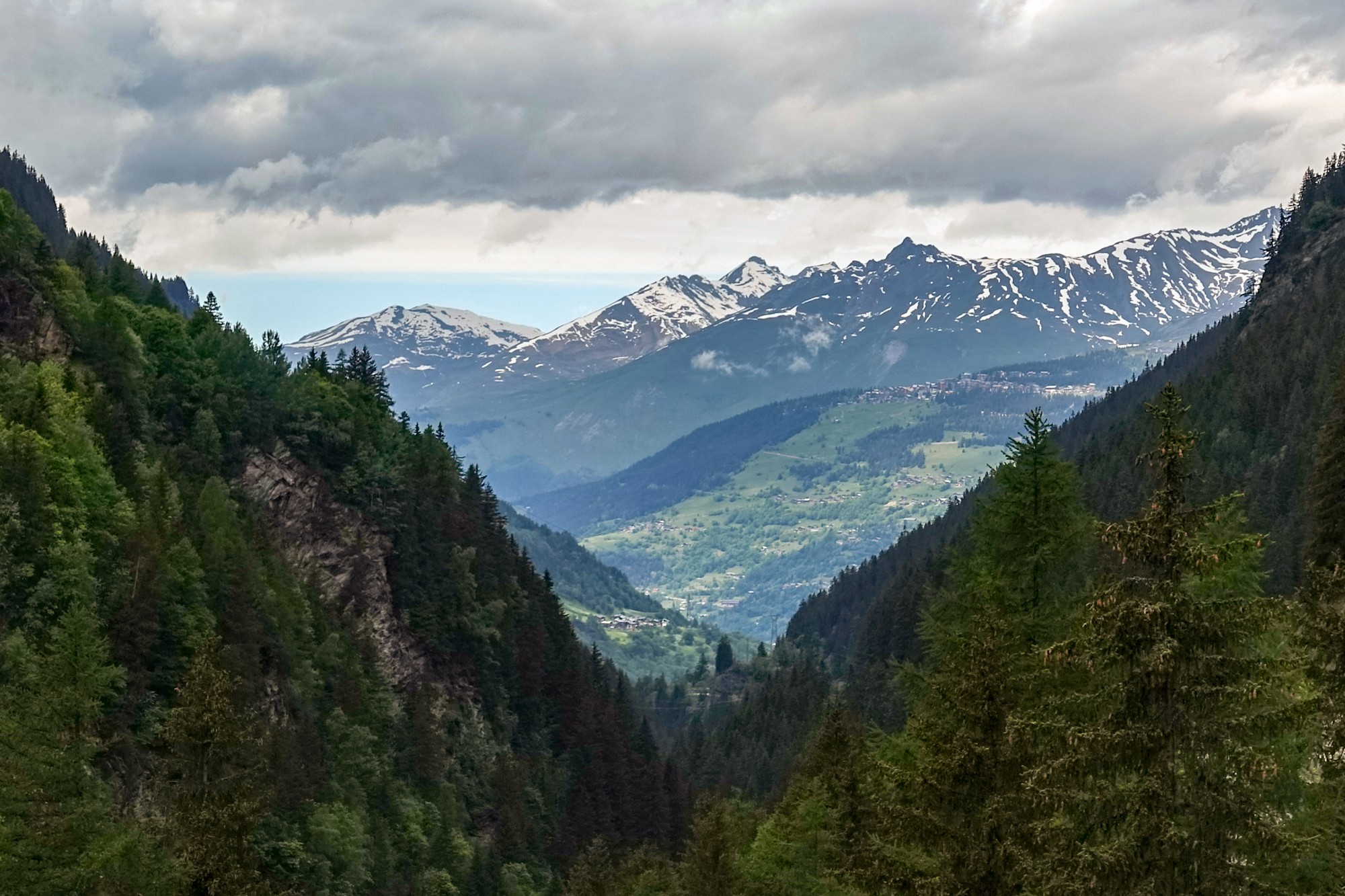 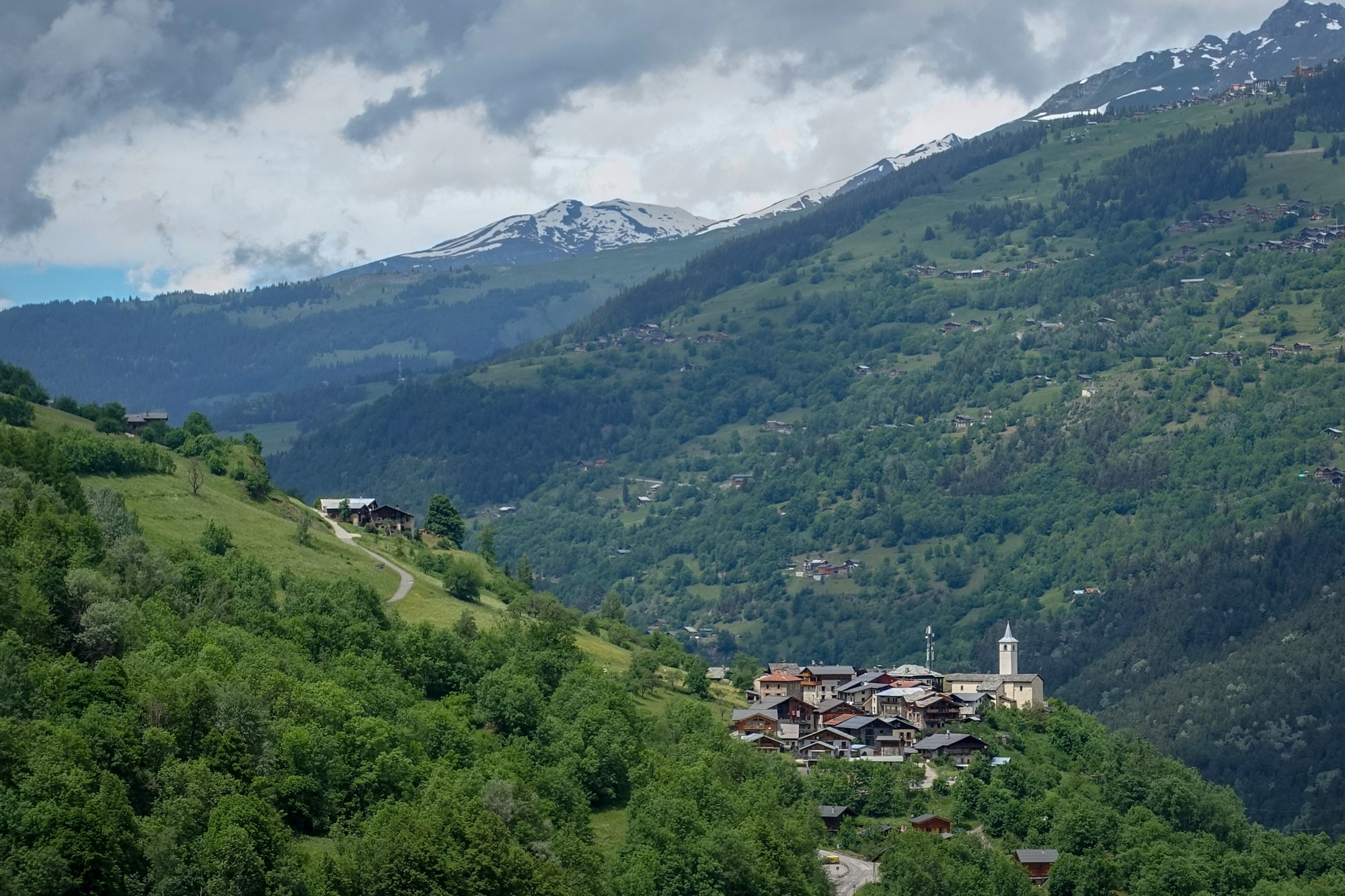 There hasn’t been a massive amount of traffic, but certainly lots of heavy lorries going by in both directions. And that’s with the col closed – I imagine it would be really unpleasant if the road was fully open. I don’t think I’ve seen a single motorbike so far, strangely.

The series of tunnels around about the lake area were not very pleasant and, whereas I’d been pleased to be going through a cool tunnel a couple of days ago, now they are a bit too cold inside. 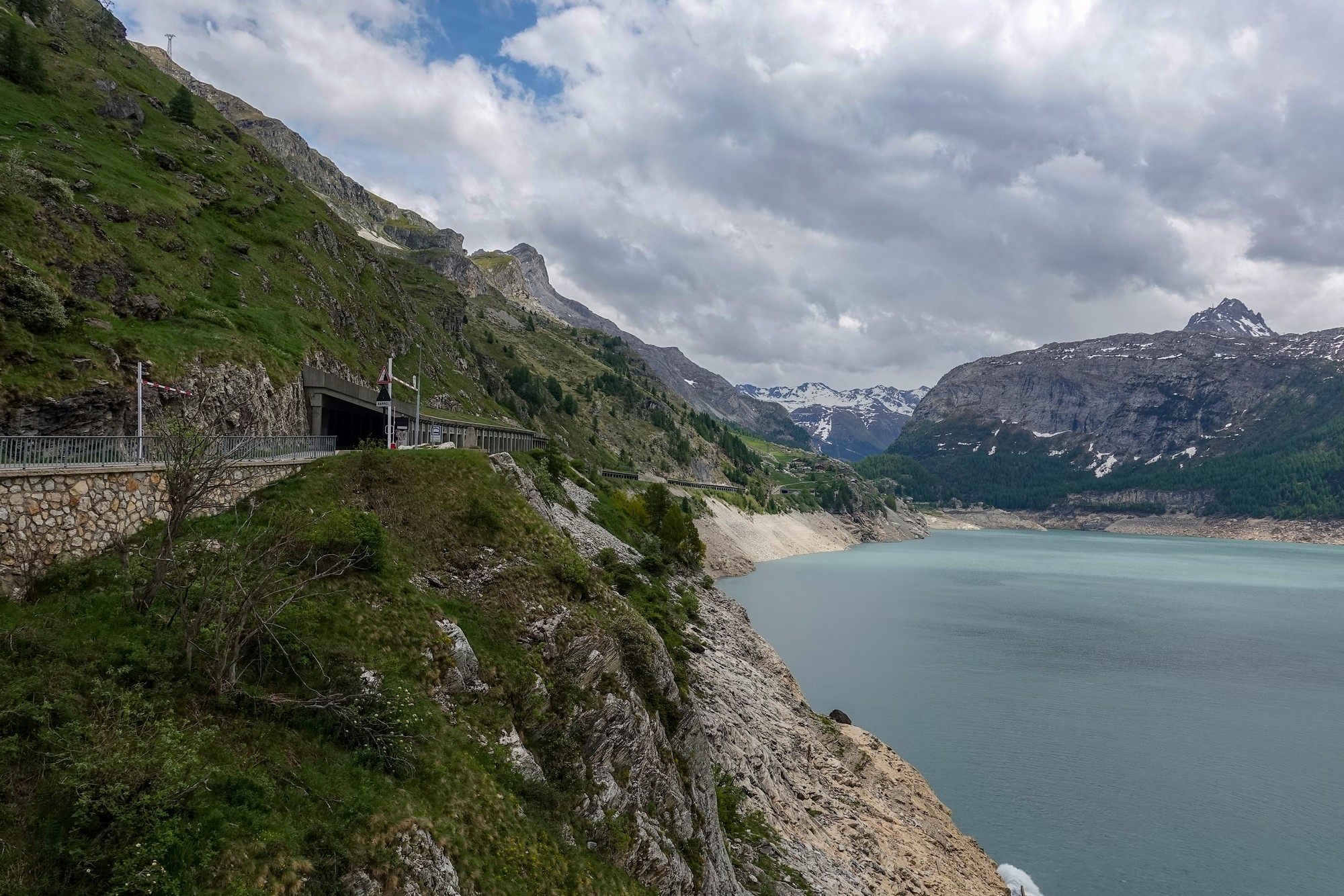 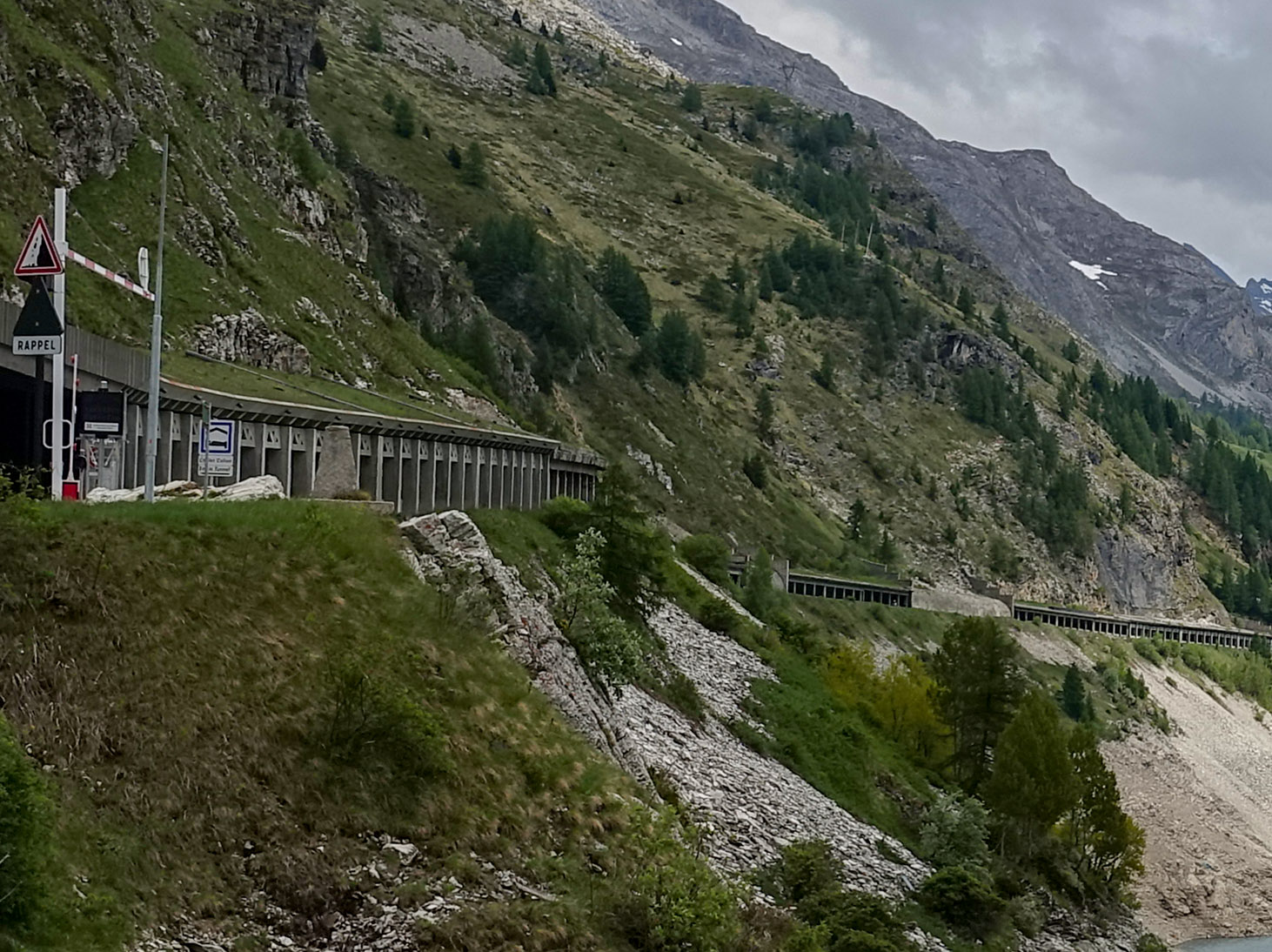 The lake (Lac du Chevril) was created  in 1952 when the historic village of Tignes, originally located in the valley, was submerged by water with the creation of the dam in 1952. The Lady of the Lake (no, not that one, Python fans) looks over the now sunken village

Every so often, the lake is drained for repairs, revealing the old village.

I’d had a banana before leaving, and an energy gel at round about 10 miles. I knew that the real climbing started after Val-d’Isere so I’ve been saving them up for that. The only big concern at the moment is that I keep feeling spots of rain. This is ok now but could cause a problem if I get wet on a very cold descent.

Val-d’Isere is hideous. It looks like some sort of Disneyland theme park.

Lots of the signs are in English, like Tea Rooms and other such abominations. There are even signs with English translations of Supermarché and Au Revoir in case anyone is too stupid to know what they mean.

Anyway I’ve just eaten most of my ham-and-Dijon-mustard sandwich (yep – I’m going up in the world!), and will now get out of this place and head up the mountain.

Report from after the ride

After leaving Val d’Isere behind, the traffic disappeared. Most of the lorries had evidently been heading for Val d’Isere, as there were loads of building projects going on, presumably to make it look even more grotesquely commercialised.

The road after that was an unspoilt mountain road. I saw a sign that the road was closed ahead at Pont Saint-Charles. 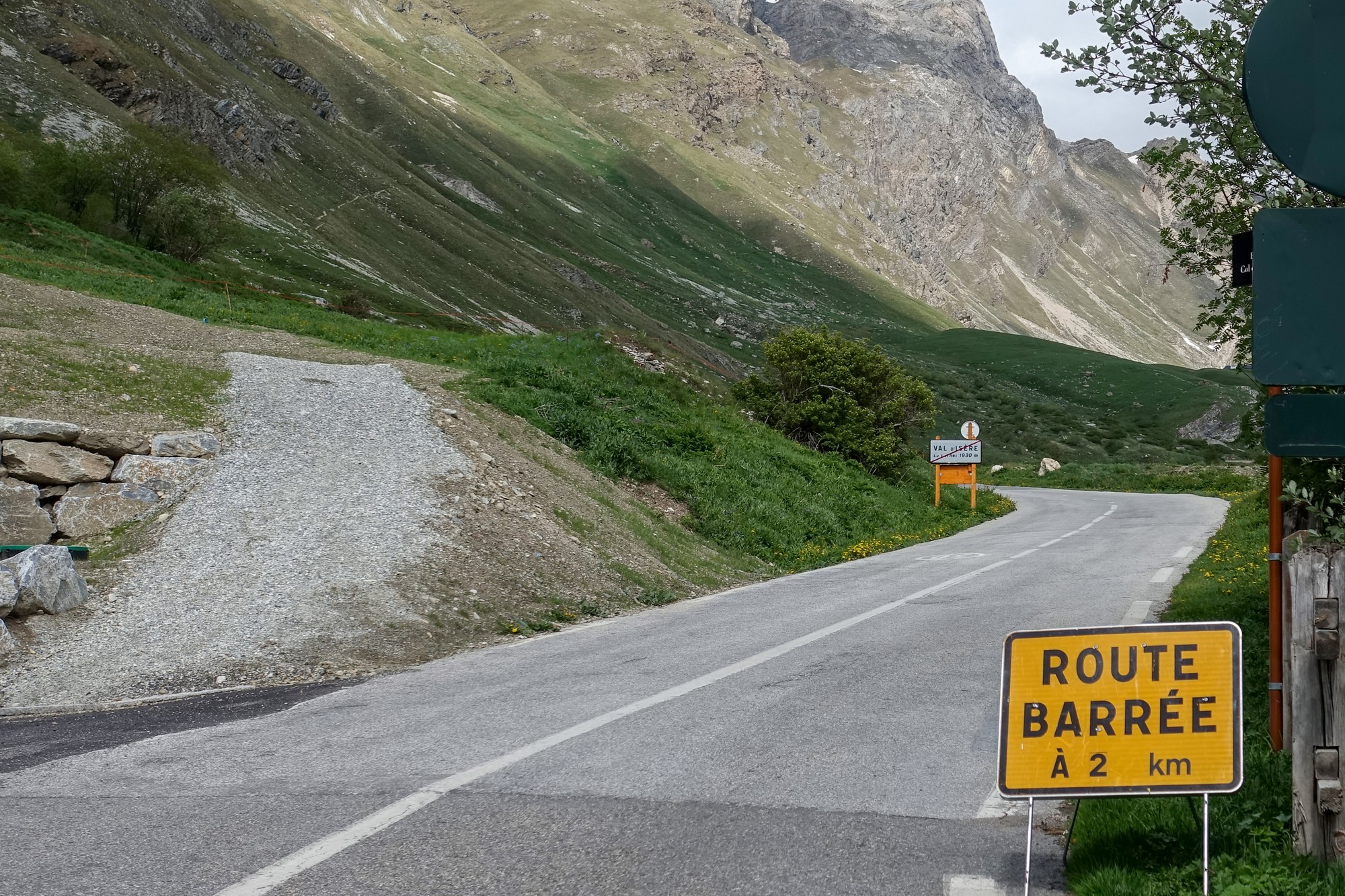 I’d been wondering what sort of road block it would be and whether I would be able to get past it. 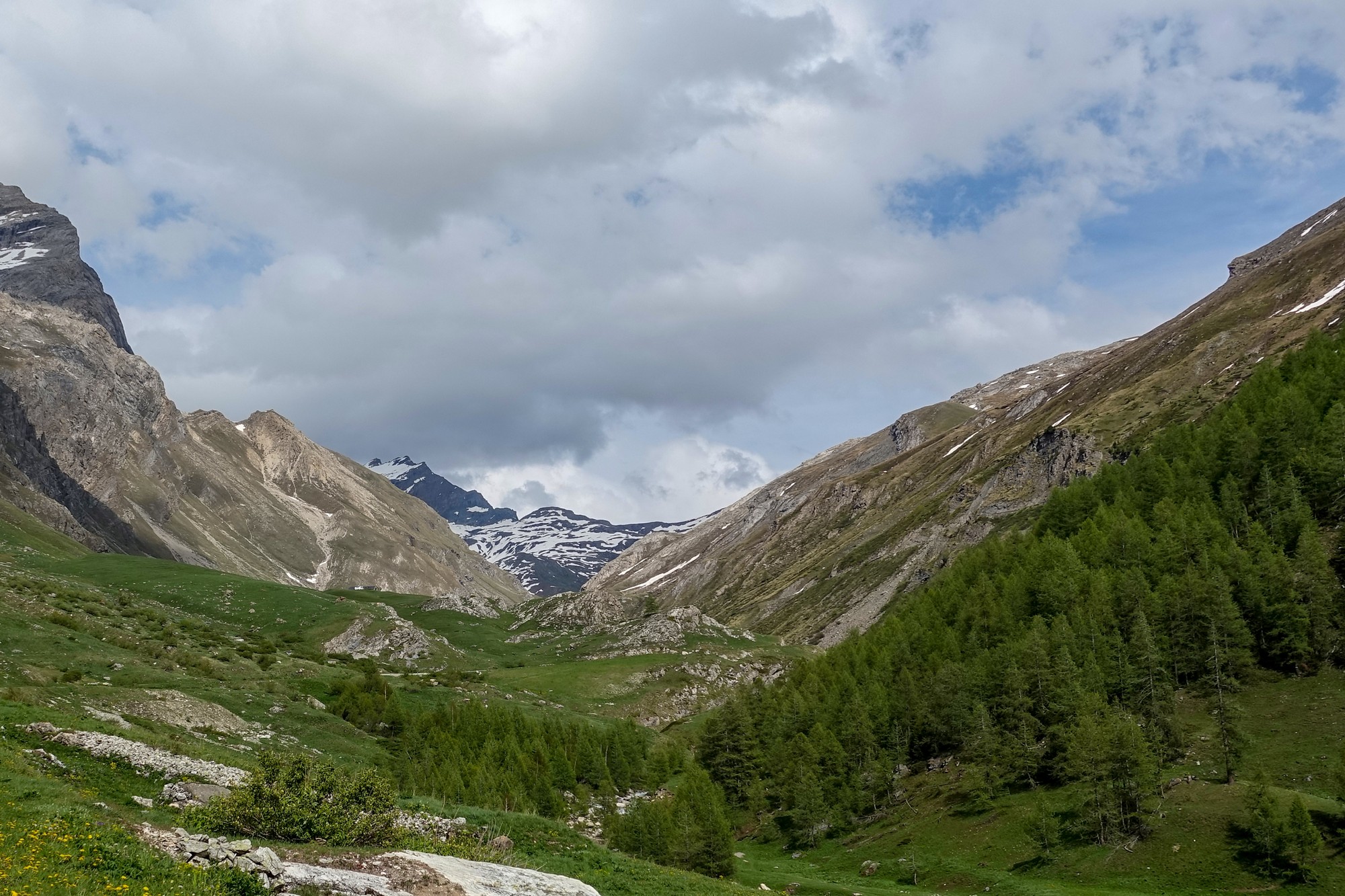 Eventually the bridge came into sight in the distance.

I could just make out a van and some people there. A motorbike went by me, heading towards the bridge. I kept my eye on it to see what would happen when he reached the bridge, and I was pleased to see that he slowed and then went straight over the bridge and up the hill on the other side. So that answered my question. 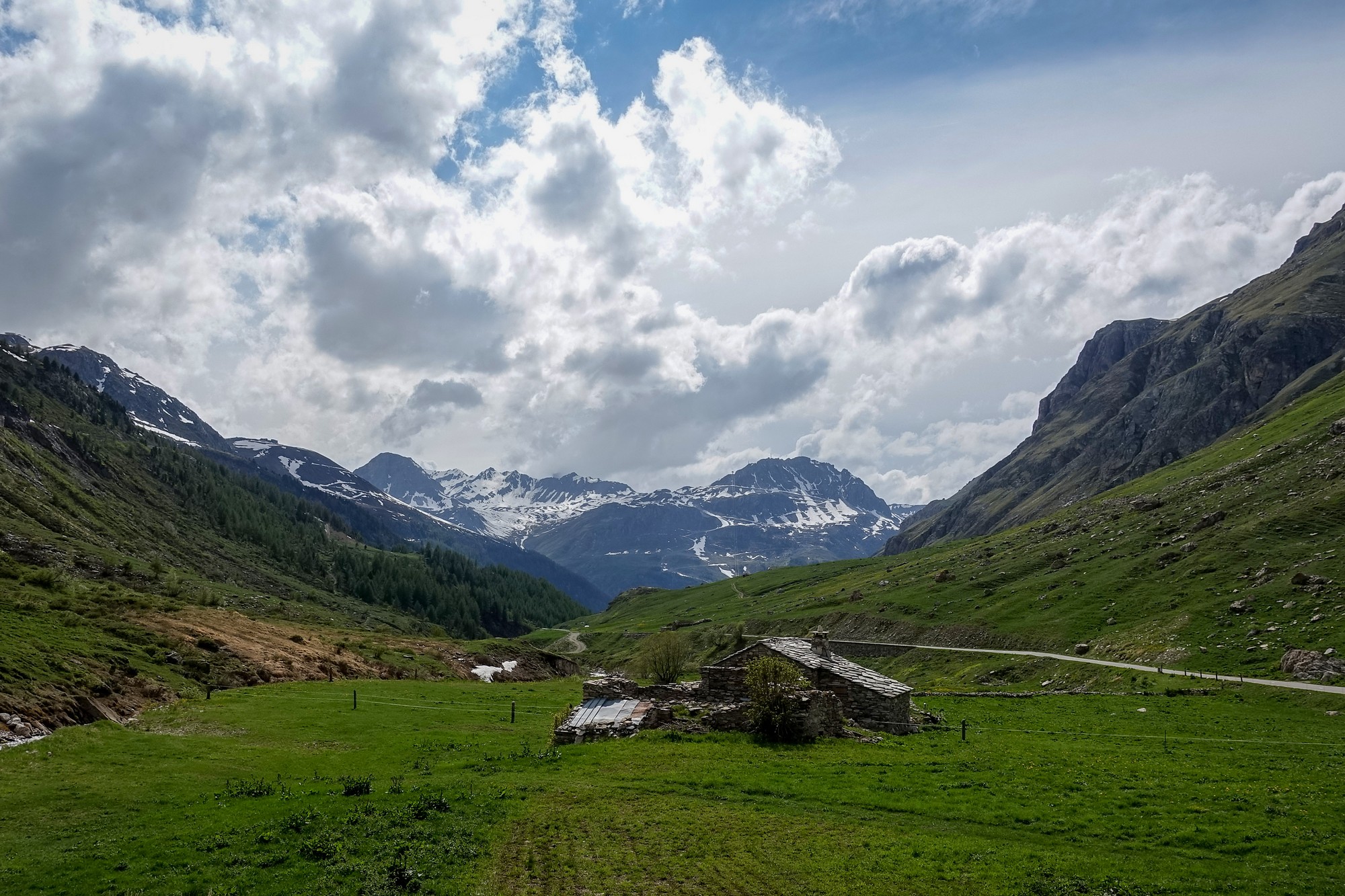 After the bridge the road goes up the side of the mountain in very long sections of straight road, switching back every now and again. 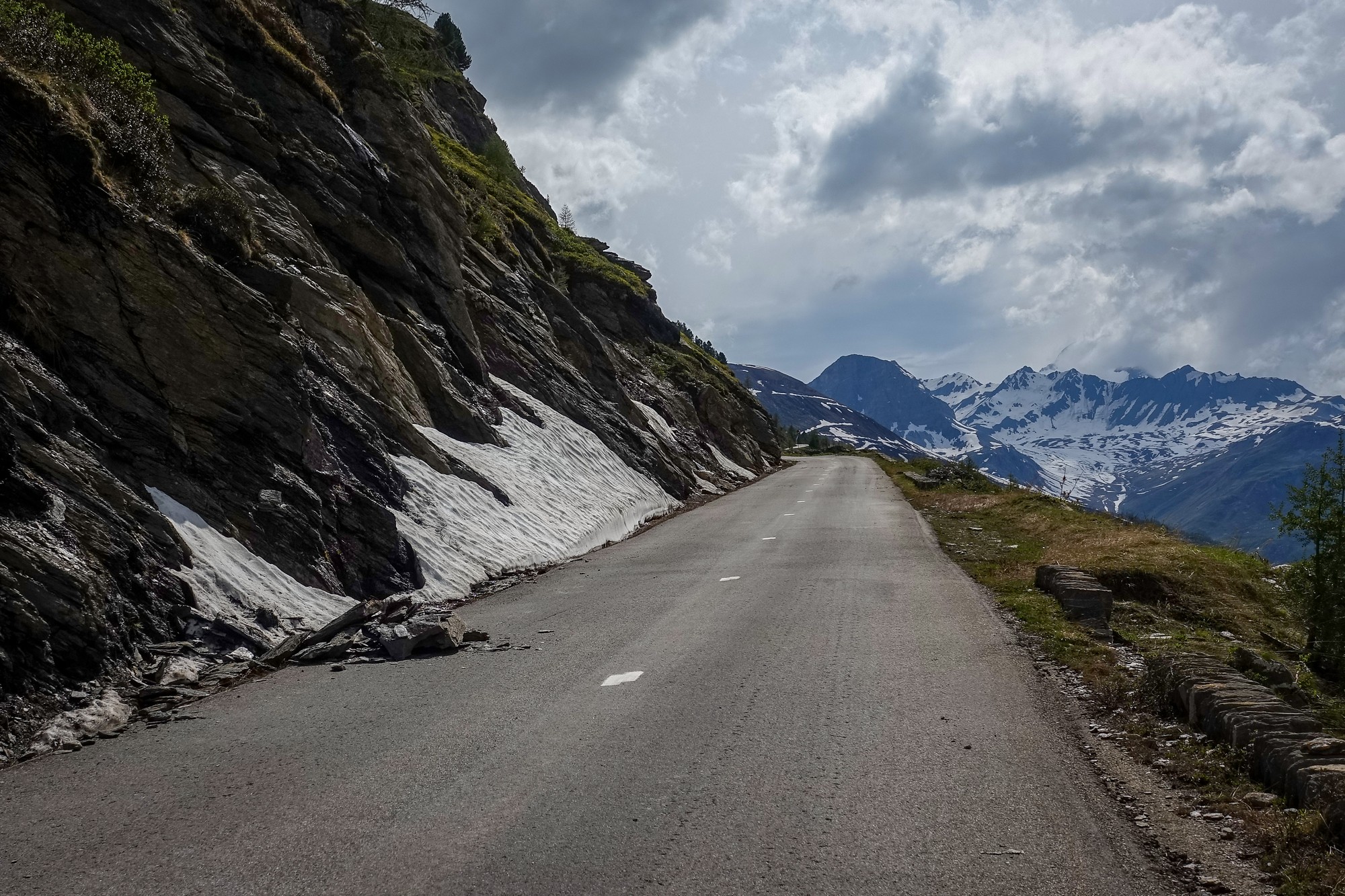 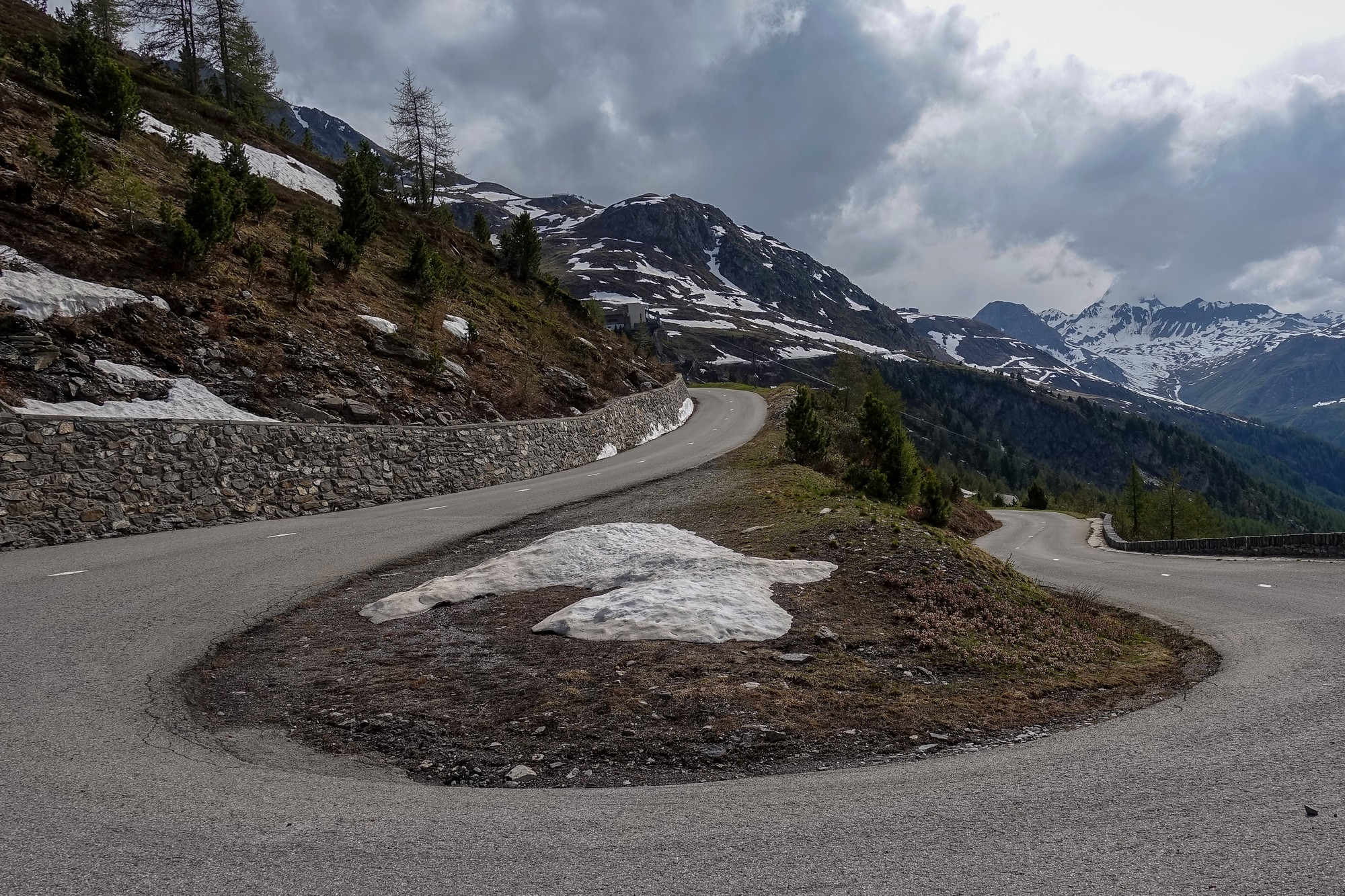 I saw lots of individual marmots, but they never hung around long enough for me to get a photo. Obviously, because of the closure, I had the road virtually to myself, apart from that motorbike that was up ahead somewhere. In fact the bike had been up there probably an hour or so, leading me to assume that it had got through the pass and was on its way down the other side.

With still about 4 or 5 miles to go I saw the red motorbike coming back down the road ahead of me. I thought of stopping him to ask about the situation up ahead, but I didn’t need to – he shook his head as he rode past me, indicating that it was no-go.

So that was another question answered. I carried on anyway, all the time looking at the weather in the distance ahead and that from where I came. All the time hearing in my head the oft-read warning – weather conditions can change for the worse very quickly in the mountains.

I stopped at Chalet Michel, a kind of small refuge, and sat on the bench inside while I checked my phone to see how much further there was to go.

I carried on further

I noticed the sky getting very dark grey in the direction I was going and that was even more worrying. I thought I would just keep going until I saw the road covered in snow, but in the end it was the weather that eventually turned me around. I felt spots of rain and I thought that’s it. So I stopped, put on both my rain jackets, and started the descent. 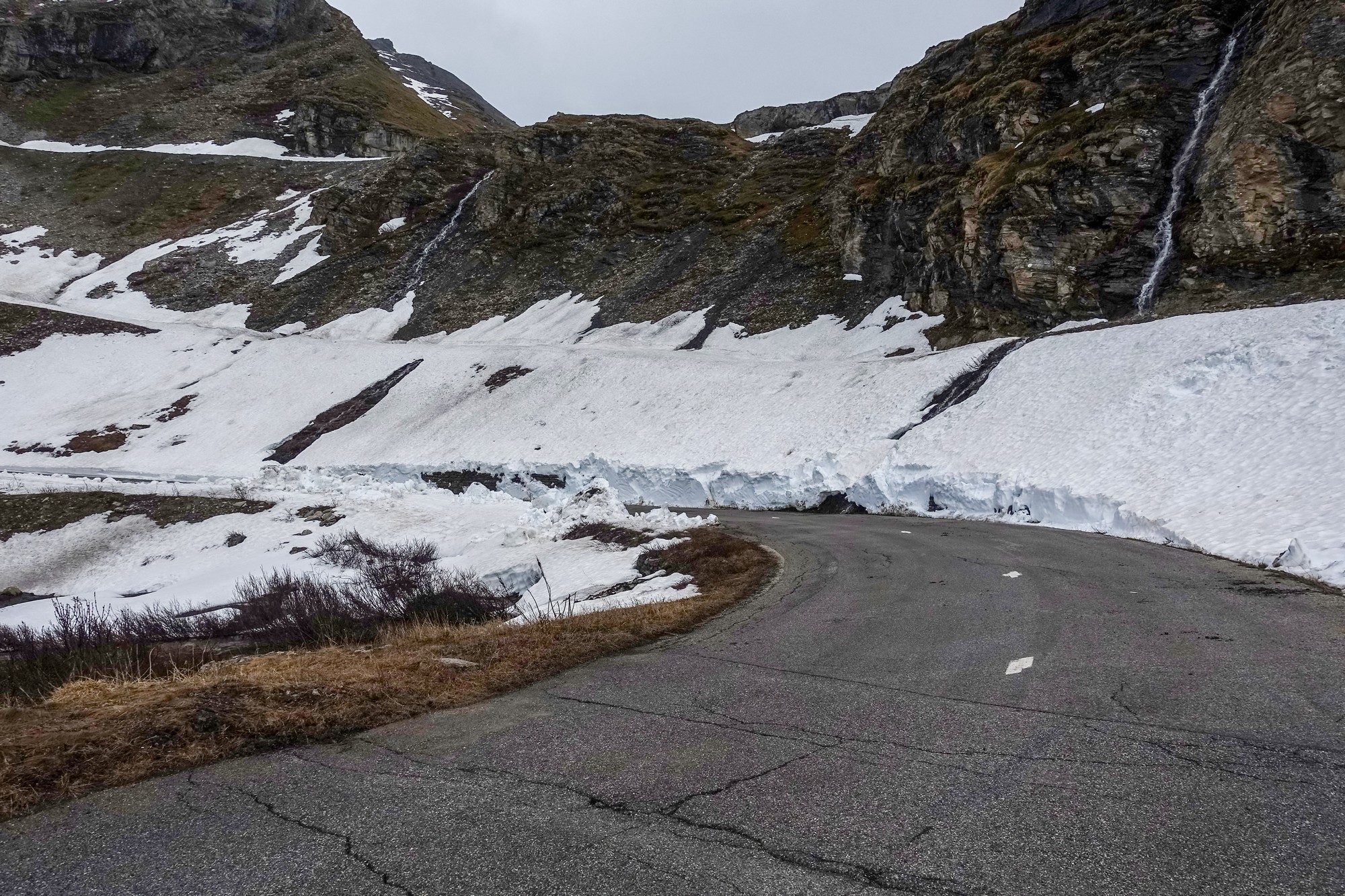 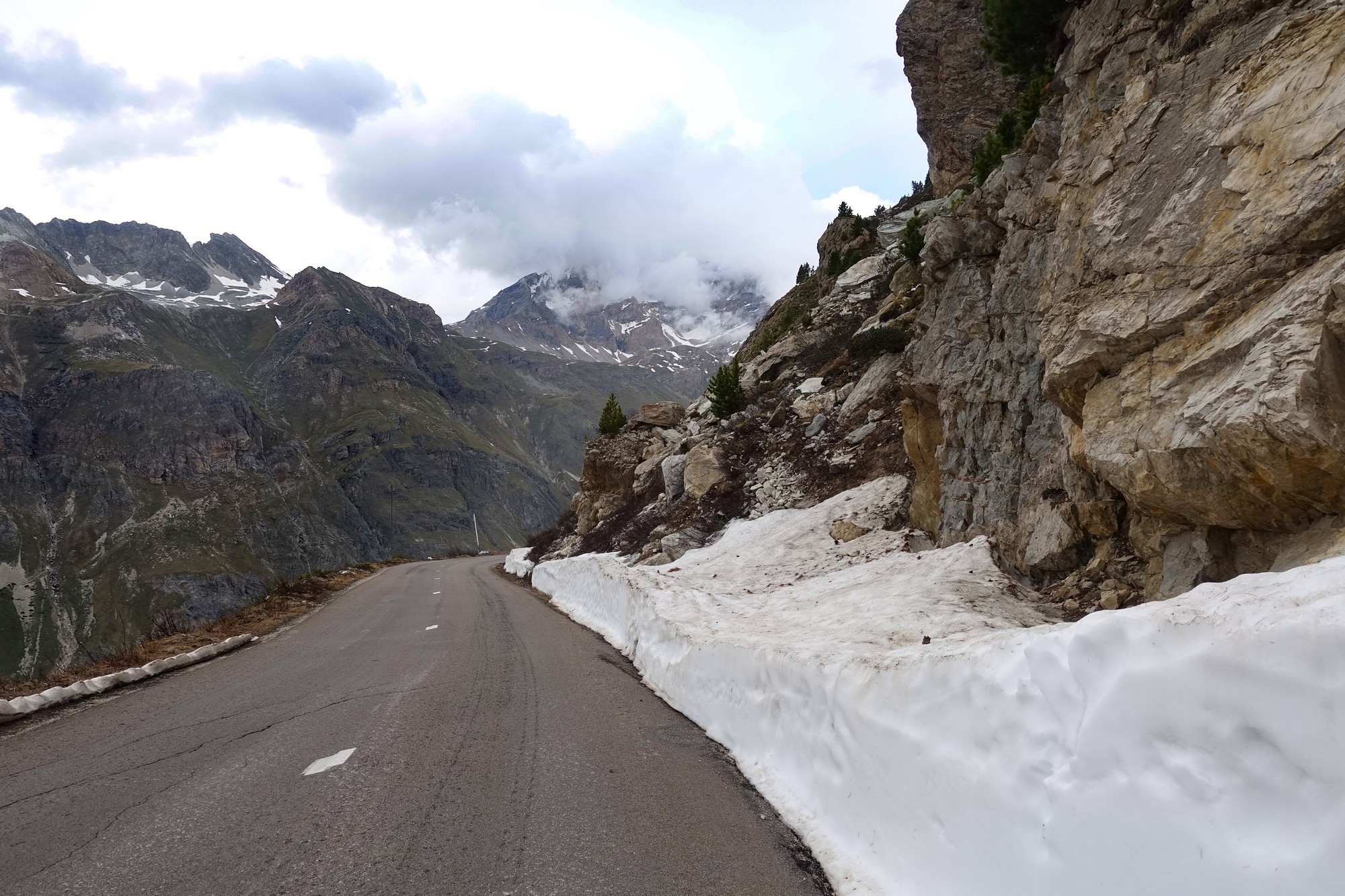 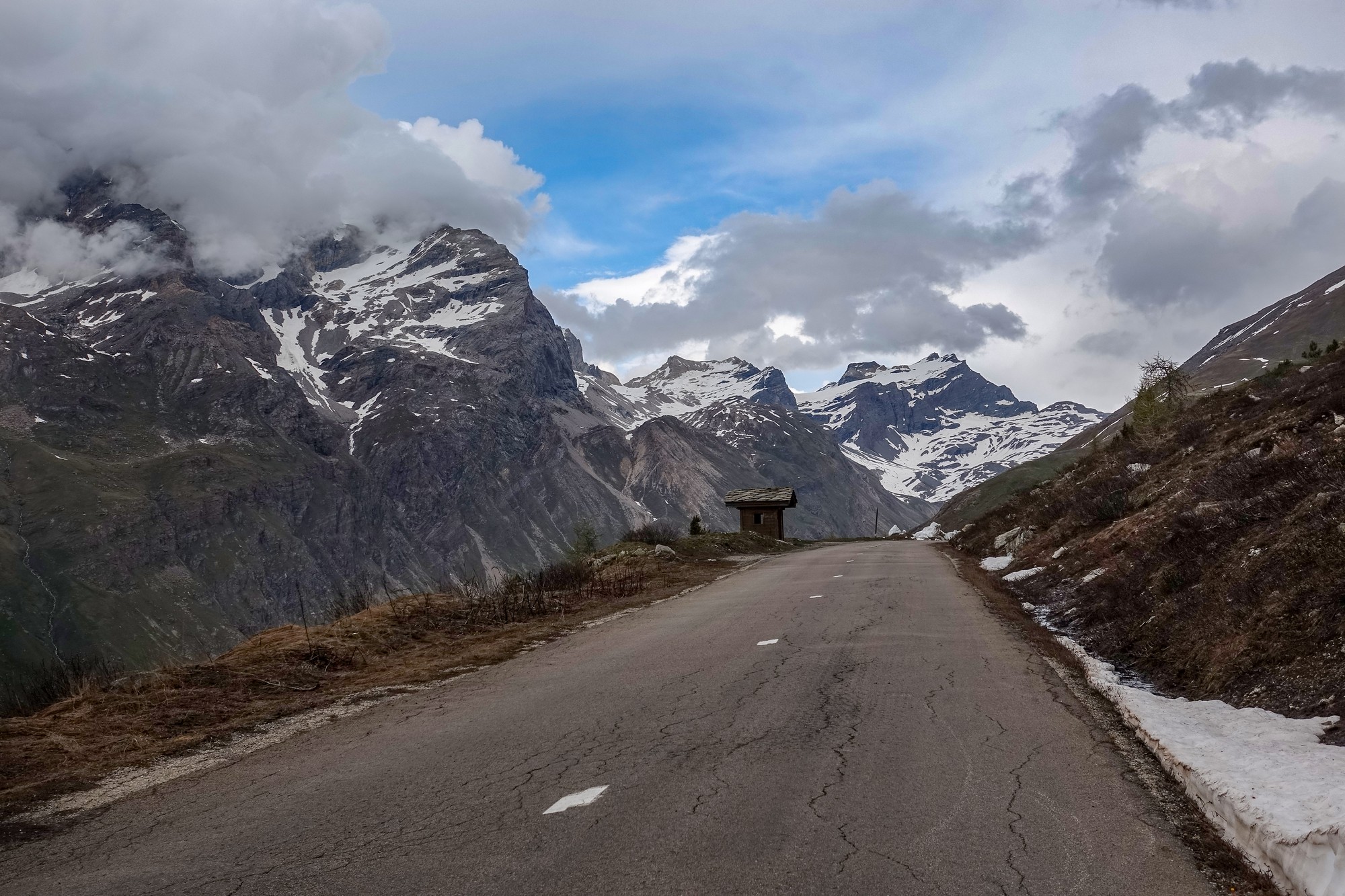 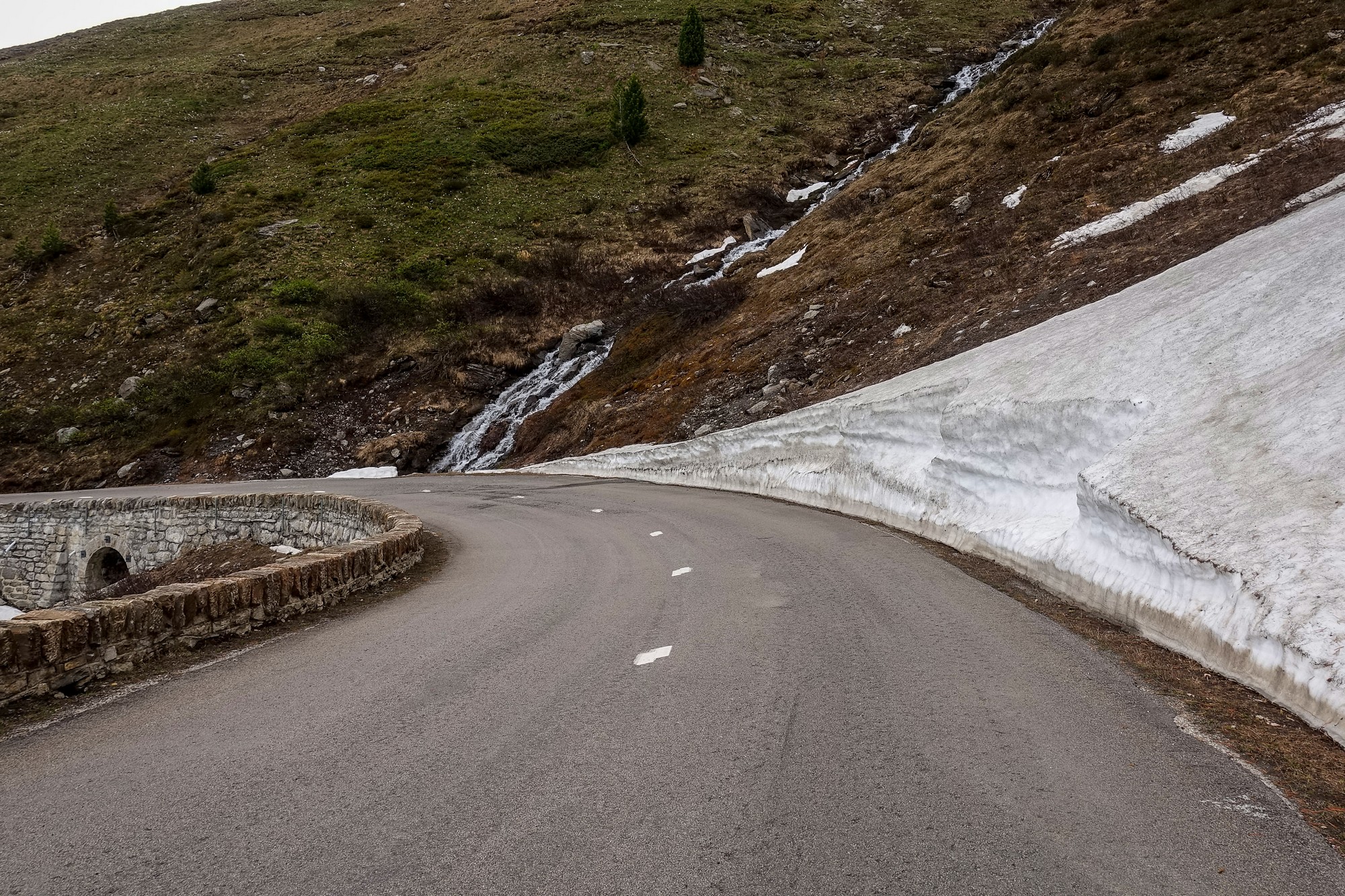 I wish I’d had disk brakes and wider softer tyres for the descent. It was fine rain at first and not enough to get the road wet. It had started raining properly by the time I got to Val d’Isère – in fact I remember seeing people with umbrellas. I had no choice but to just plough on ahead, with the hope of outrunning the rain.

The best thing about that descent is that it’s now over.

The rain started off as a fine drizzle and ended up as full on rain. I got more and more wet. Suddenly those tunnels that I’d been dreading became the source of massive relief because they were the only part of the ride that was dry. Having said that, I could barely see where I was going in them because my glasses were covered in rain and also it was very dark inside. In fact it was very gloomy outside too; most drivers had their lights on.

Just before one of the tunnels, I took my overglasses (shades) off and left them off for the remainder of the ride. (Still had my normal glasses on)

The whole descent was really noisy – the noise of my tyres in the wet, my rain jacket flapping in the wind, cars, vans and lorries speeding by, their tyres swishing noisily on the wet road. Meanwhile I was trying to steer a line between the bits of dodgy road where there was often a breakup of the surface near the edge of the road I was on, but everything is so noisy you don’t know if you can swerve around the damaged road because it’s difficult to know whether there’s a car behind you and you don’t like to spend too much time looking around when you’re coming down off a mountain at 30 mph in the wet trying to negotiate bends as smoothly as you can, all the time realising you’ve got next to no braking power, your hands freezing cold hanging on to the bars for grim death, your feet wet and completely numb with cold, like a couple of blocks of ice on the end of your legs, the rain almost painfully stabbing your face, as you brace yourself for another dodgy bit of road you have no option of avoiding, that sends pain through your wrists as you bump over it. Your body locked in position, neck hurting because you’re down on the drops and craning to look ahead. You snatch a quick look at the Garmin, risking taking your eyes briefly off the wet road ahead, to see if there are any bends coming up that might require your brakes to actually do something useful.

Unless you’ve experienced it, it is so difficult to describe. It’s one noisy, wet, tense, cold roller coaster ride, except you know that you won’t crash on a roller coaster and you don’t have to worry about the actions of other drivers.

My front brake developed a ticking sound when applied. It still seemed to work OK. A couple of days later I noticed this blip on the rim of my wheel. I’ve yet to investigate further 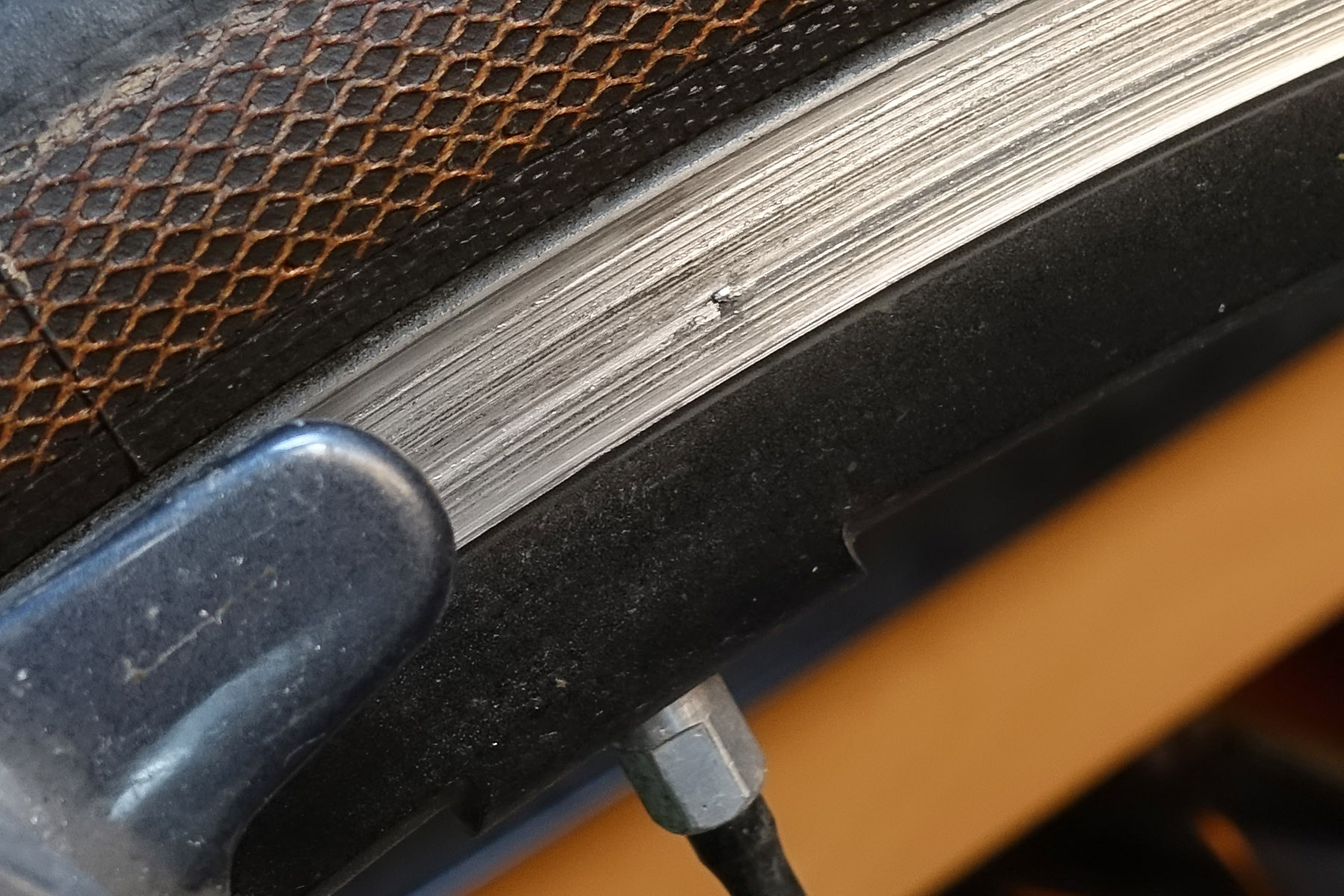 Somewhere in the last few miles, I reached a bit where it had not rained at all. The dry roads restored my confidence, and I guess my legs may have dried a bit on that stretch. I never regained the feeling in my feet though until after the ride had ended.  I wrang my socks out after taking them off. I was drenched and chilled to the bone. But more than that, I was mentally exhausted, my nerves frazzled.

During the descent, I remembered fondly the almost total lack of traffic on the descent from Col de la Bonette last year. Happy days…

I would not fancy using this road in busier times, like the summer holidays.

The good news is that I’d had plenty of energy to carry on climbing if I had been able to, Even on the descent I had loads of energy left, even though I was soaking wet and freezing cold.

So I wouldn’t mind doing this climb again, from a physical perspective, but I don’t know if I could face the traffic and those tunnels again. Still, I had the nice bit beyond the road closure, which was so quiet today, just me and the marmots. It was a shame about the weather.

Since writing all of the above I’ve now decided that as far as I’m concerned I have done Bourg-Saint-Maurice to Val d’Isere and I never want to face those tunnels and lorries and that road surface again, so to complete this climb another day, I’ll be starting from Pont Saint-Charles and just do it from there.

The other alternative is to wait until 26th June this year (2022), when the col de l’Iseran will be closed to all traffic except bikes, that morning from 8:30 to 12:00 . I bet the cyclists that day won’t be alone with the marmots!

After the ride I discovered, predictably, that those tunnels had confused the hell out of the Garmin, and I had to repair the data, once again using the excellent facilities at GOTOES.org.

It wouldn’t appear to require rocket science for the Garmin to take account of tunnels when recording a ride. Maybe later ones fare better in this respect – mine is quite old now.