The Col de Tourniol was closed for repair work the last time I was here in 2019. Today I got to add it to my collection of roads into the Vercors.

I’ve just stopped at a bench by the side of the road with a beautiful view over the plains. 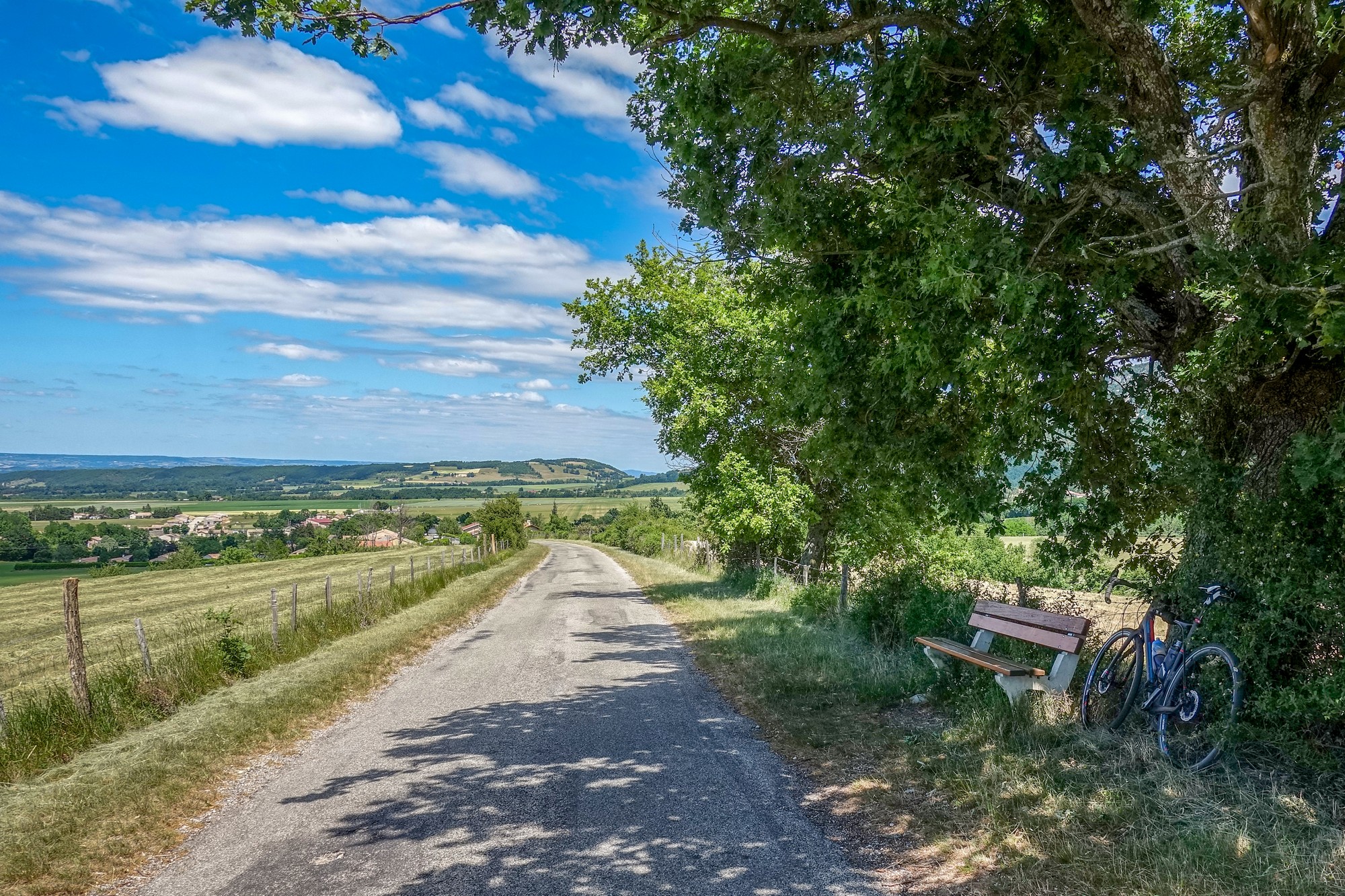 Just checked my phone to see roughly where I am – it looks like I’m just at the beginning of the climb to col de Tourniol, so that’s excellent timing for me to have something to eat.

I feel like I’ve come from the hell that was the descent from the Col de l’Iseran  to the heaven that is these beautiful roads around the Vercors. 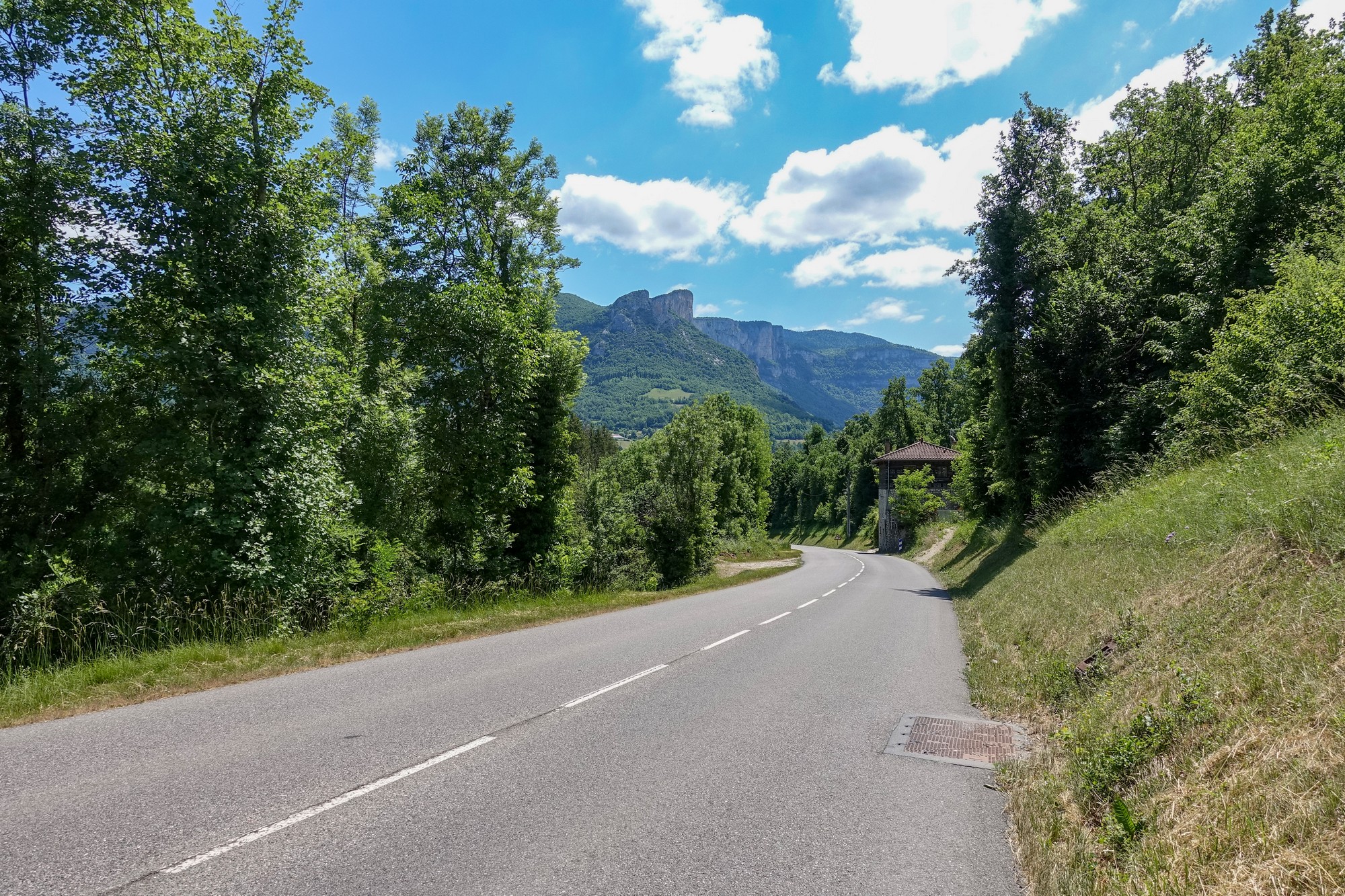 I haven’t seen a lorry all day and none of the nutter drivers that were in the mountains. The road surface is absolutely superb. Mainly I have the plains of the Isère river basin to my right, and the huge cliffs of the Vercors on my left, 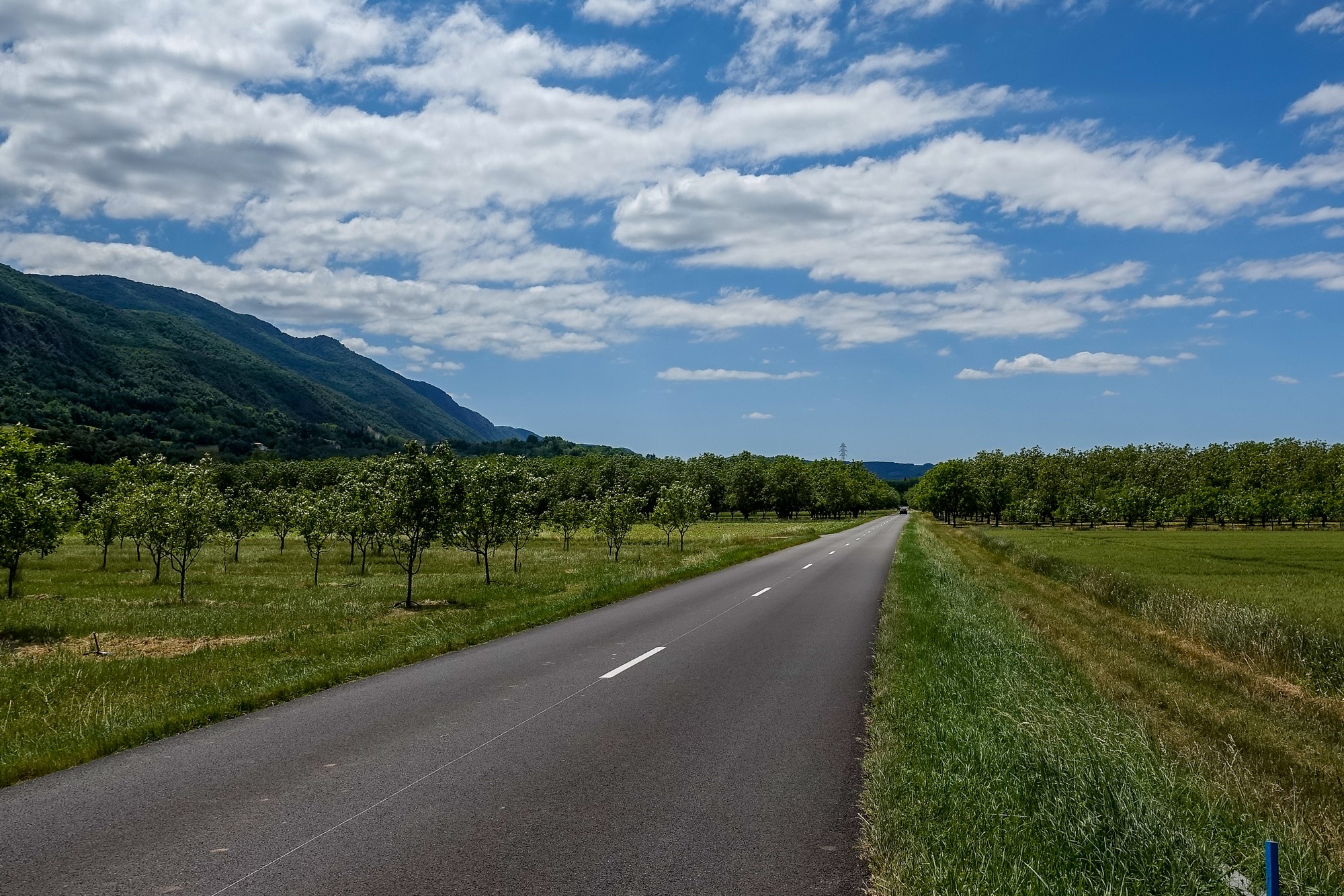 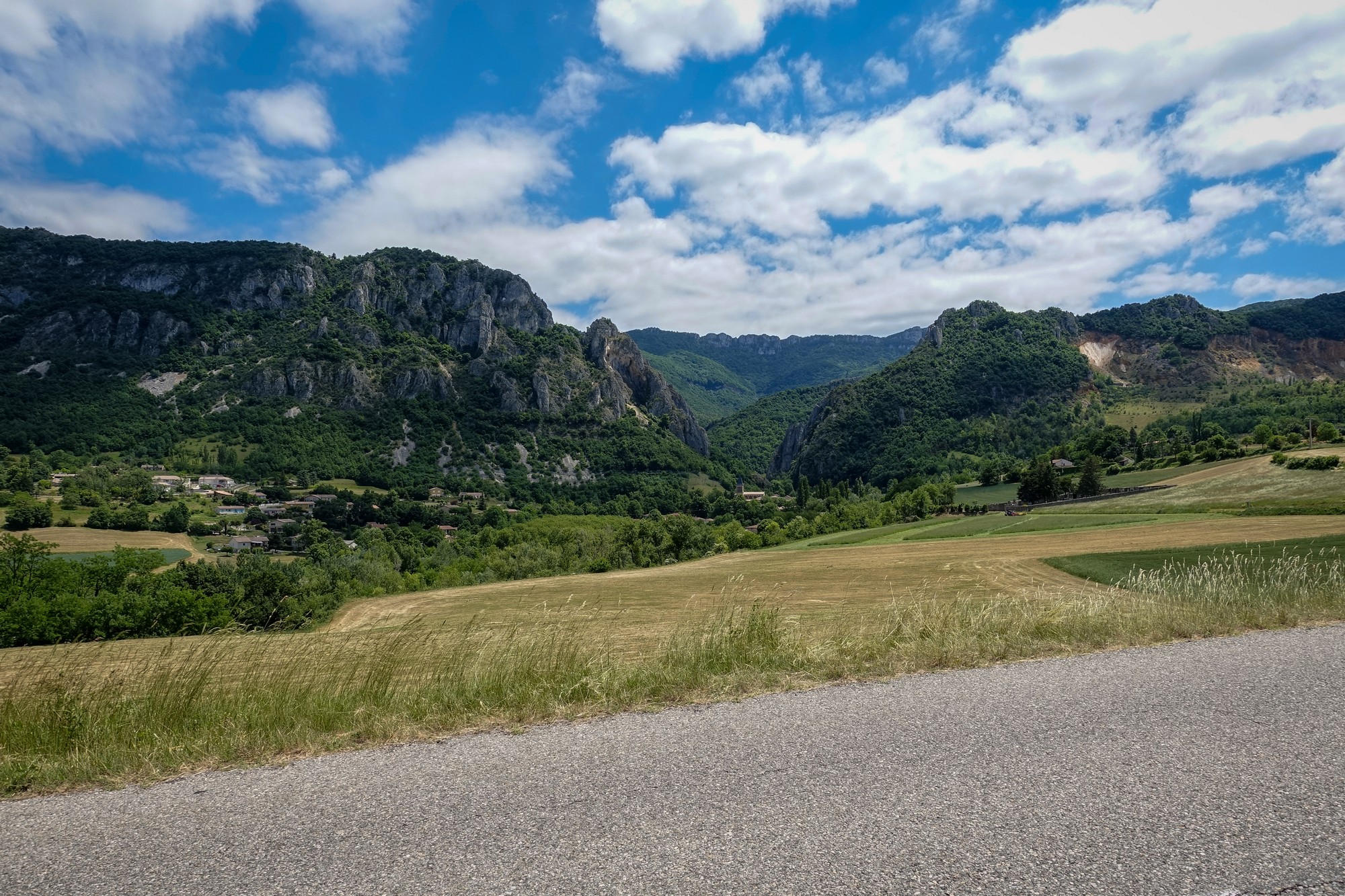 I have seen some signs written on the road surface which look like they’re for the Tour de France; if the Tour is coming this way that could explain the excellent road surface. The road has been beautifully sweeping across the fields and there are hardly any fences so you feel like you’re part of the landscape.. 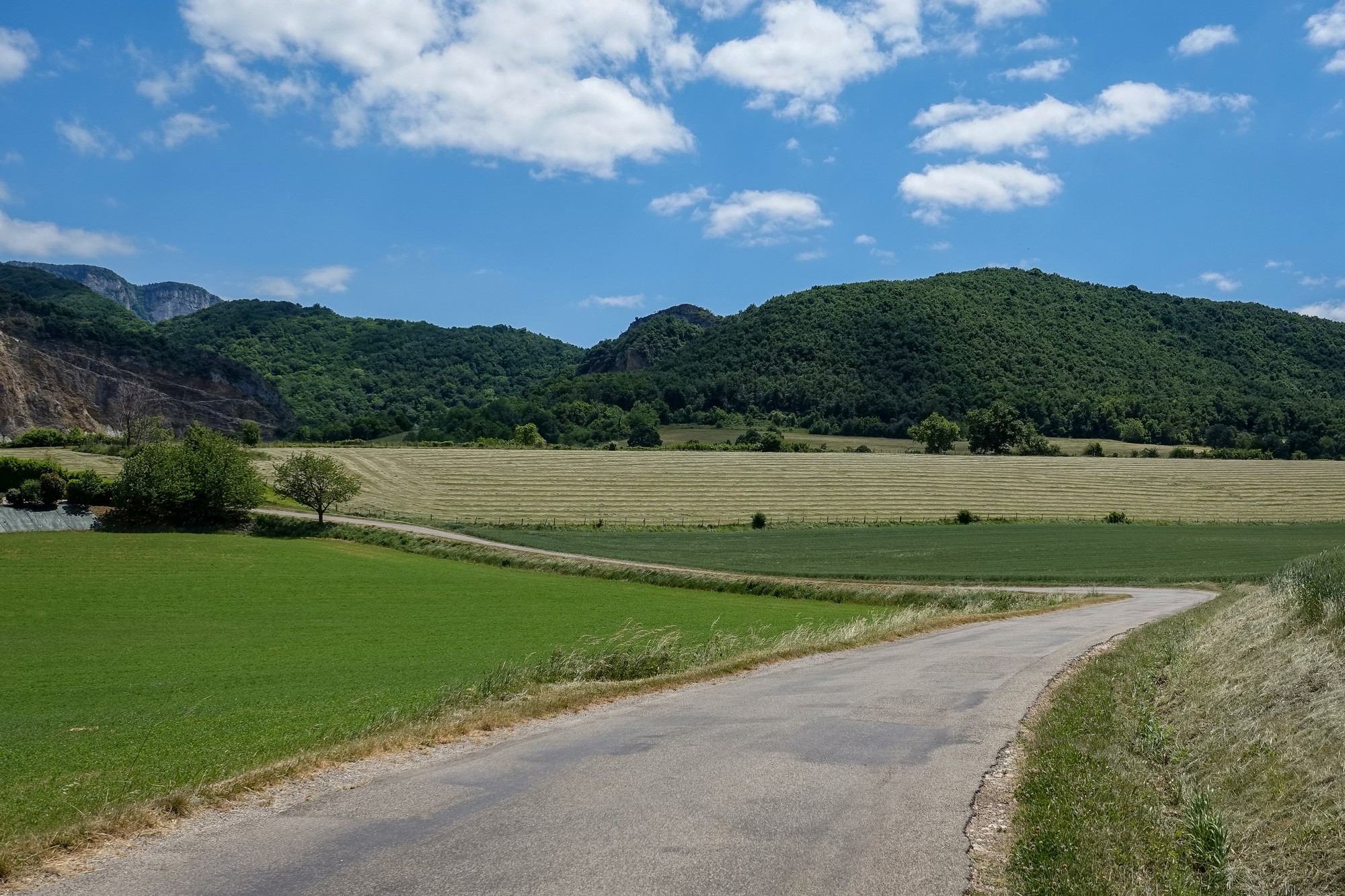 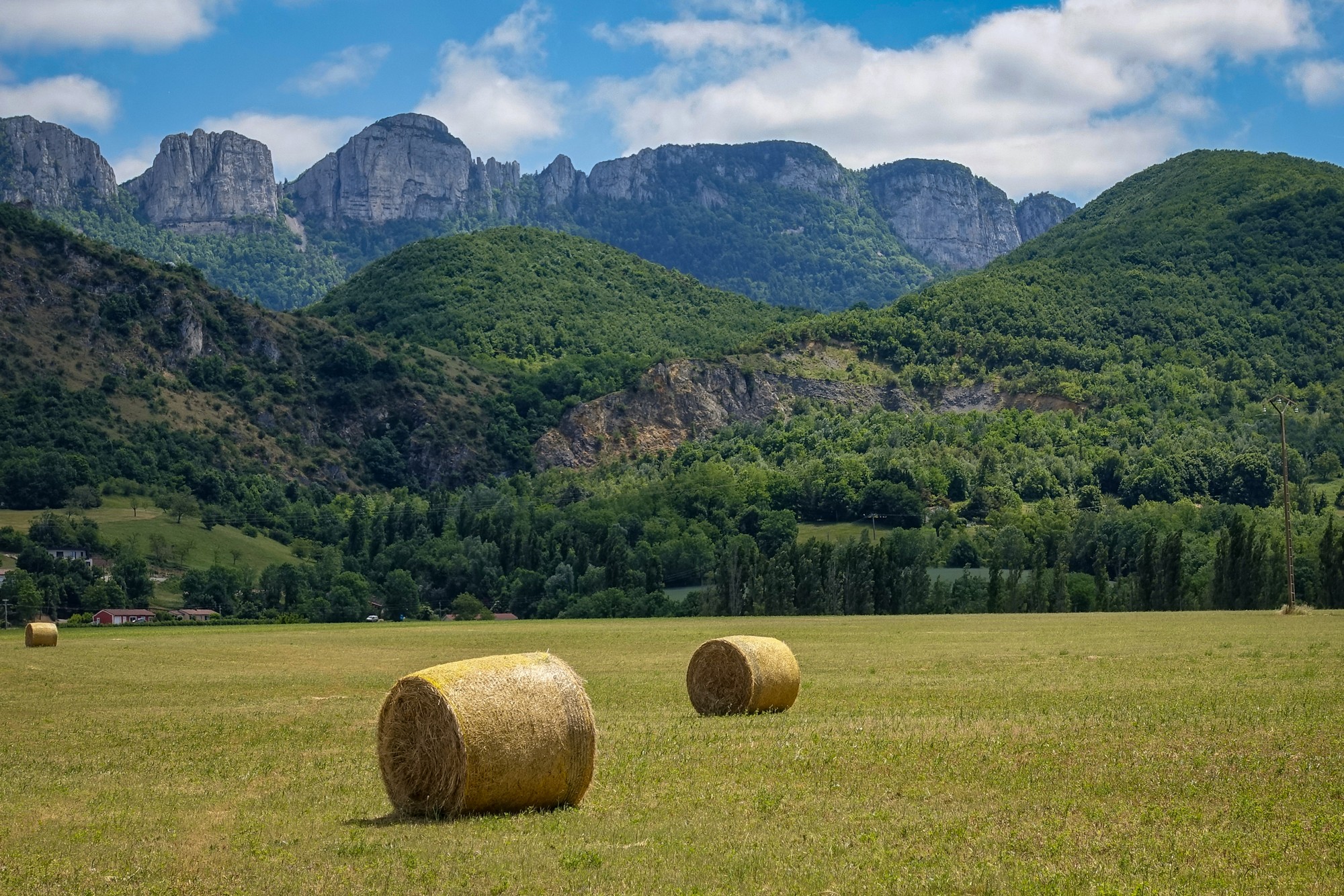 A couple of times I have come through villages and towns that seem to have some kind of festivities going on, over and above the normal French lunchtime gatherings. Groups of people were sitting outside at tables in one village – in another there was a football match being played.

So I’m beginning to wonder if it’s not some sort of bank holiday – that could explain why it seems so quiet on the roads.

The wind has really picked up since I sat down on this bench. I hope it’s behind me on the climb. The weather is predominantly blue sky, the temperature in 20s, but I feel fine in my base layer and I have arm warmers in case I need them. It’s not stiflingly hot. In fact the conditions are ideal. 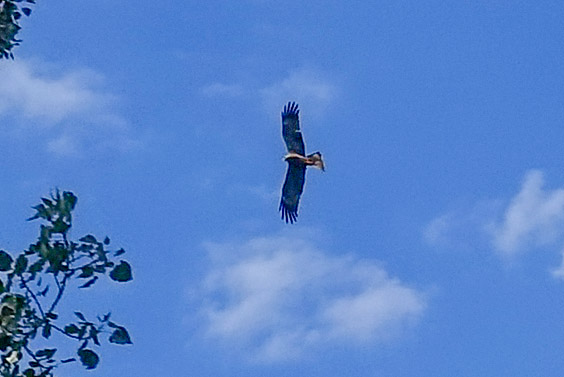 So I need to check two things when I get back – one is the Tour de France route and the other one is to find out if it’s a bank holiday today.

This report coming from next to the radio tower.

The Col de Tourniol was quite easy. The climb started outside the village of Barbières. 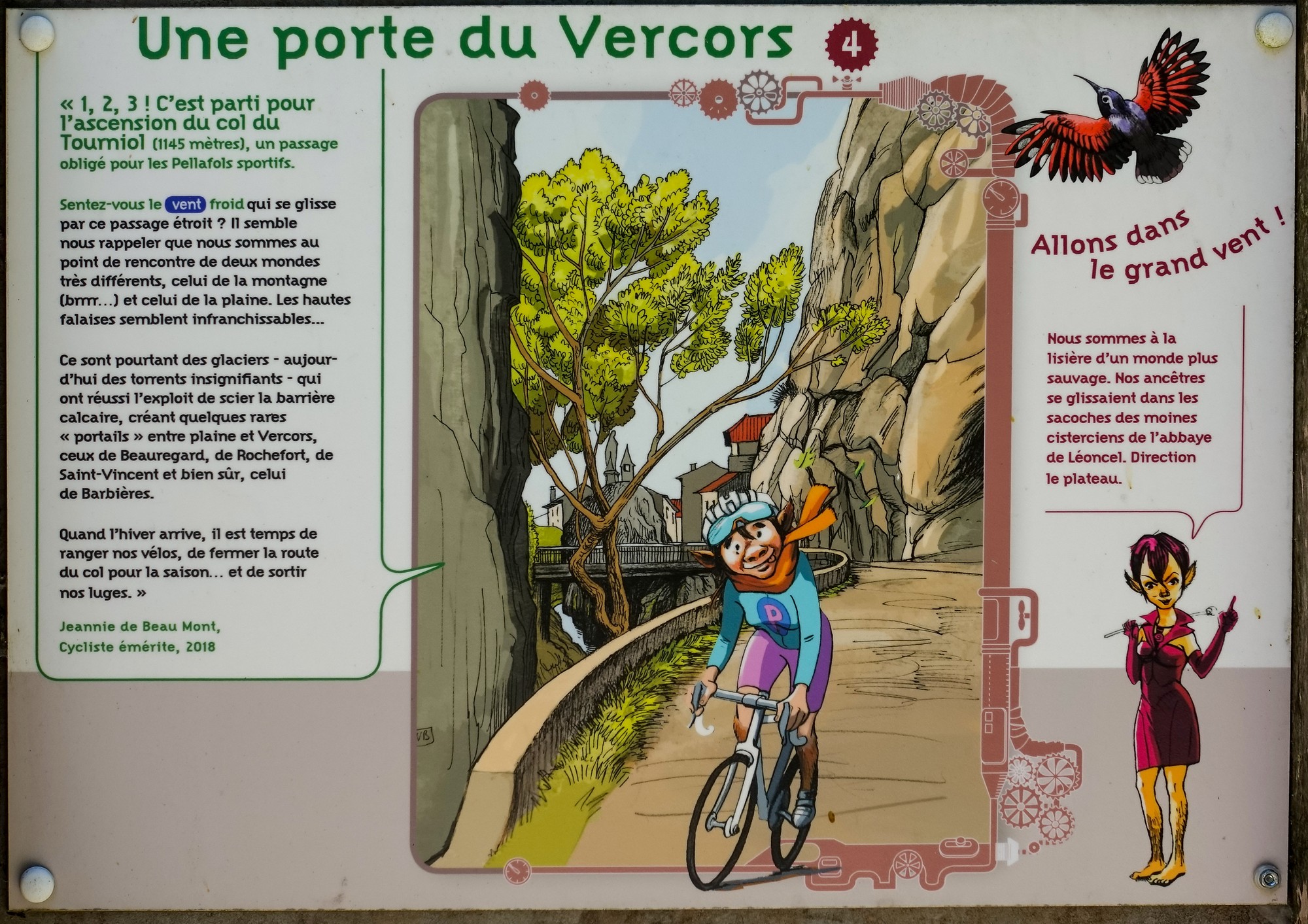 « 1, 2, 3! Let’s set off for the ascent of the Tourniol pass (1145 metres), a compulsory passage for the sporty Pellafols. Can you smell the cold wind slithering through this narrow passage? It seems to remind us that we are at the meeting point of two very different worlds, that of the mountain (brrr…) and that of the plain. The high cliffs seem impassable… It was however glaciers – today insignificant torrents – which managed the feat of sawing through the limestone barrier, creating some rare “portals” between the plain and Vercors, those of Beauregard, of Rochefort, of Saint-Vincent and of course, that of Barbieres. When winter arrives, it’s time to put our bikes away, close the pass road for the season… and get out our sleds. »
Jeannie de Beau Mont, Distinguished Cyclist, 2018 … 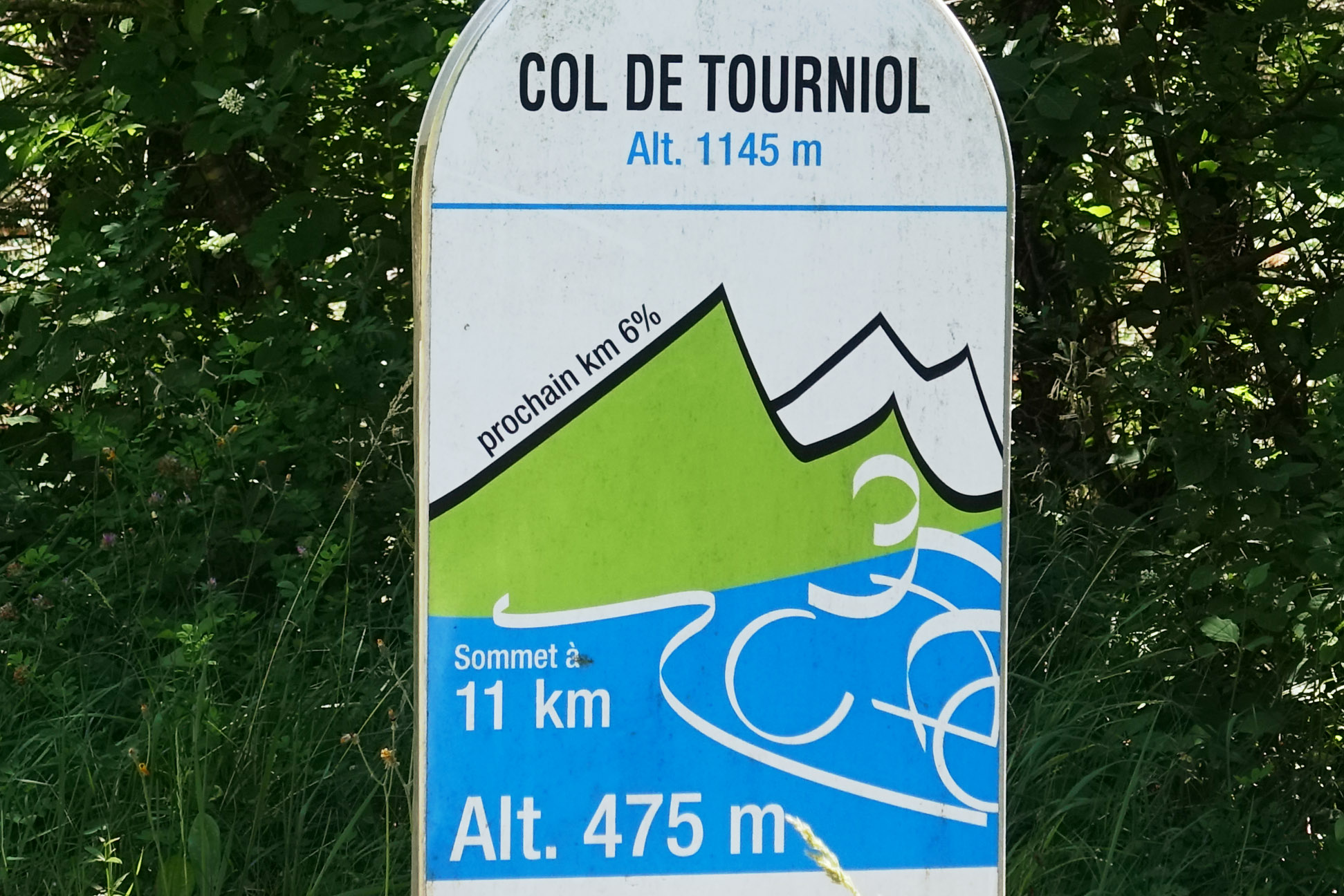 Nearly all the gradient signs said 6%, with a couple of 7% and one 5% I think. Every now and again was a view of where I’d come from, but this was no col de Rousset, in terms of seeing the road zig-zagging beneath you. 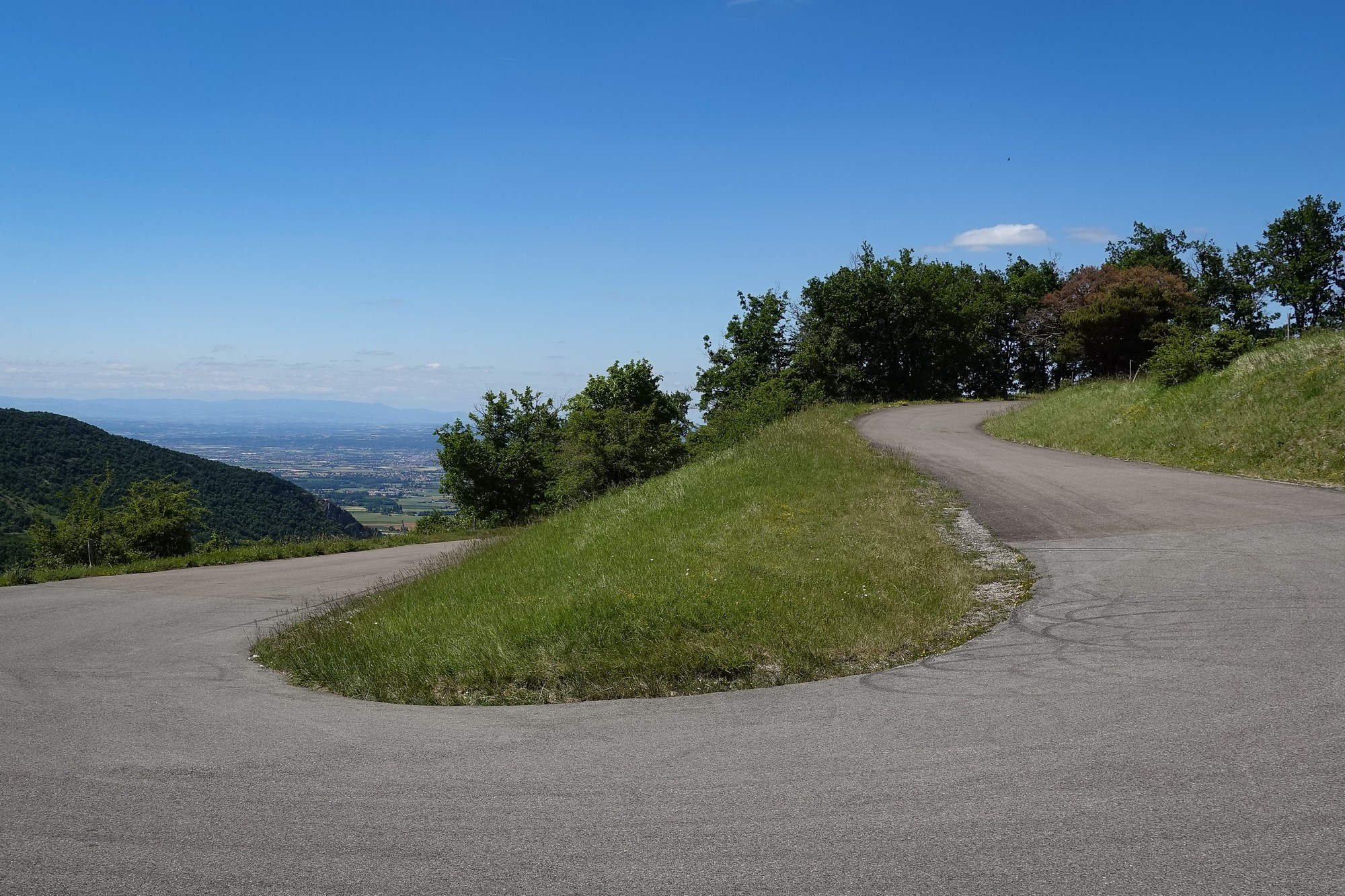 I found it to be a pretty straighforward climb. 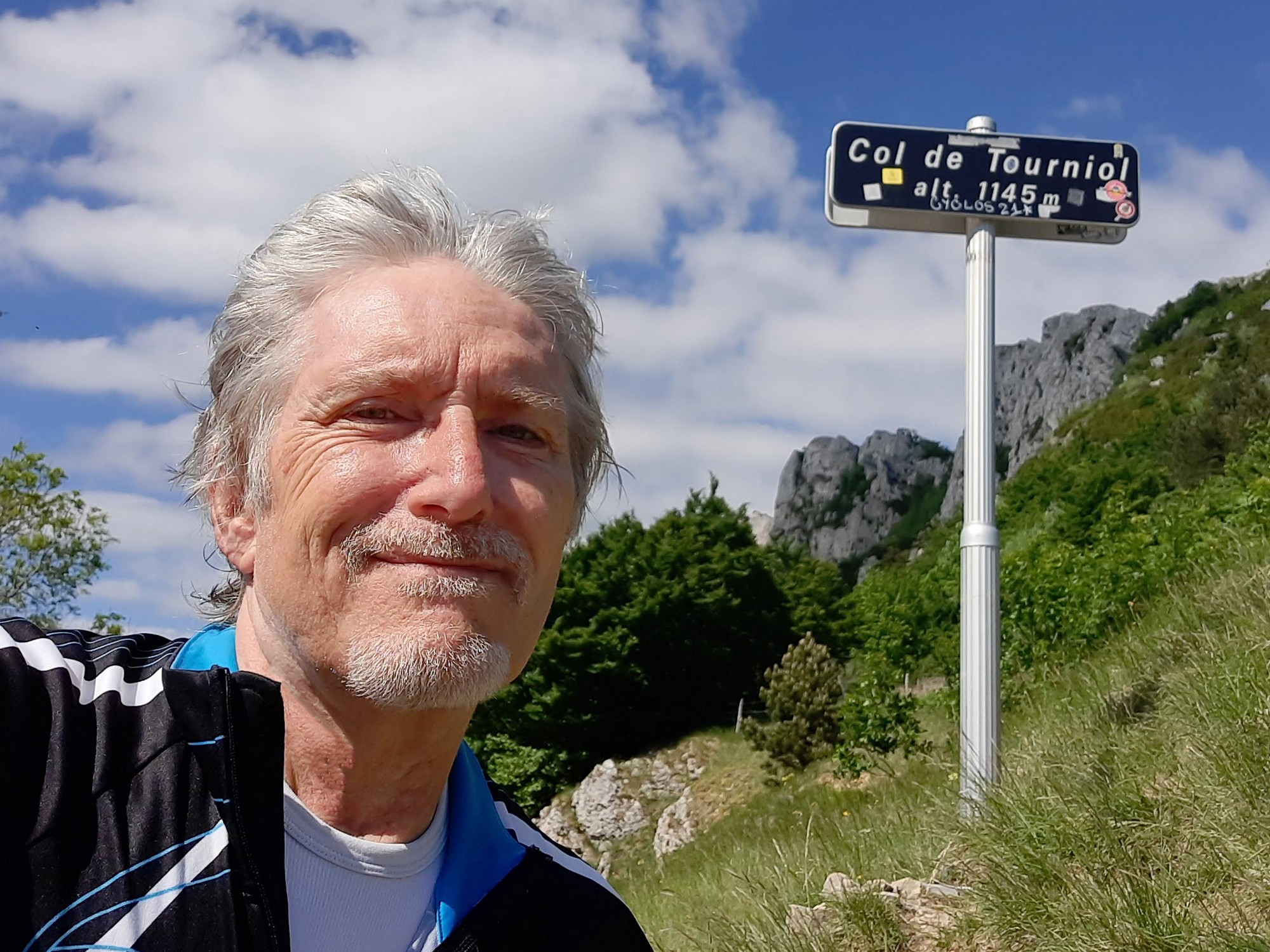 From the col, there was a two-mile descent to Léoncel, 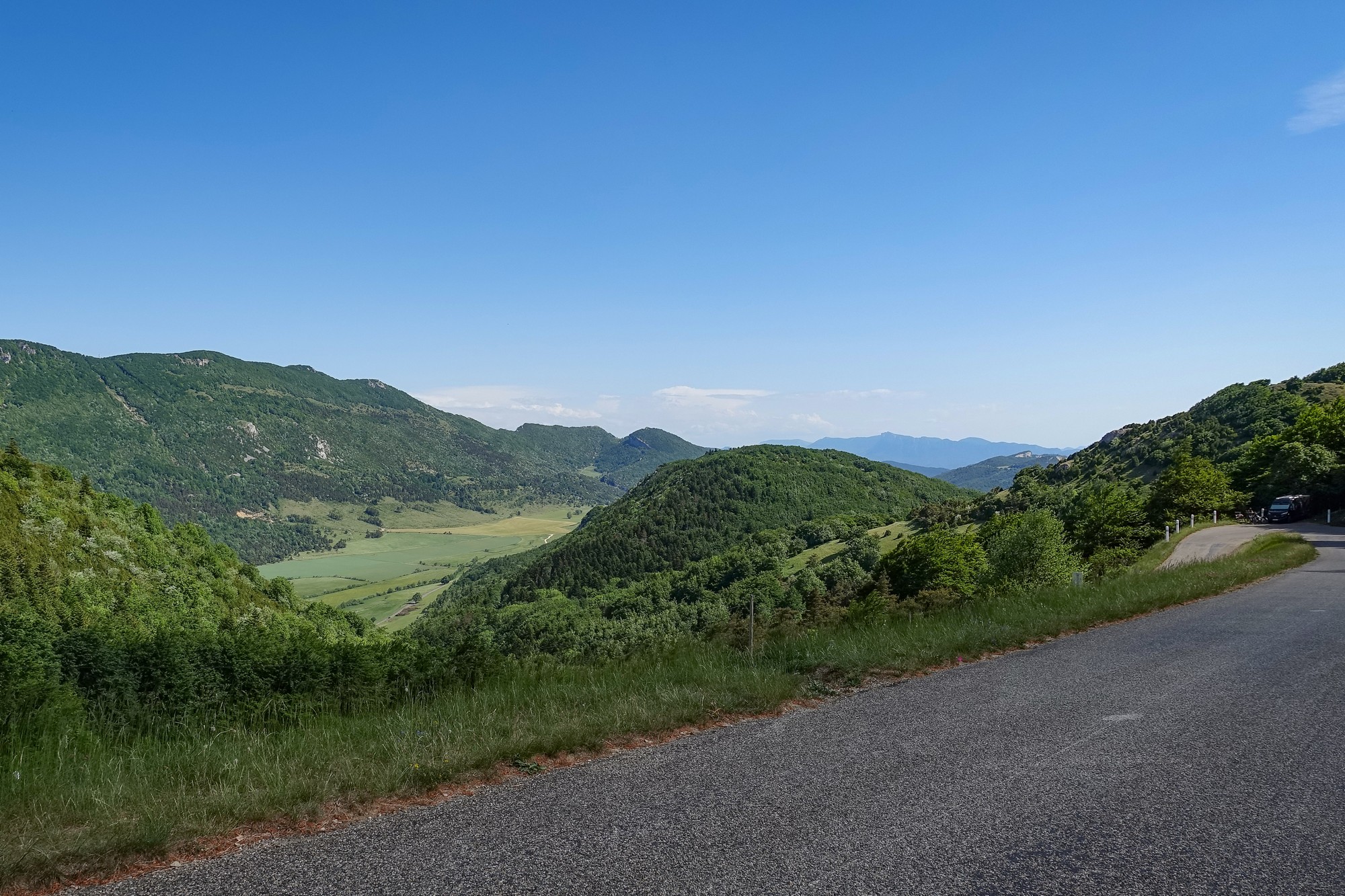 … where I put my arm warmers on while watching a farmer walking through his field rounding up his errant cattle, who would have preferred to just lie there chewing the cud in the evening sun. 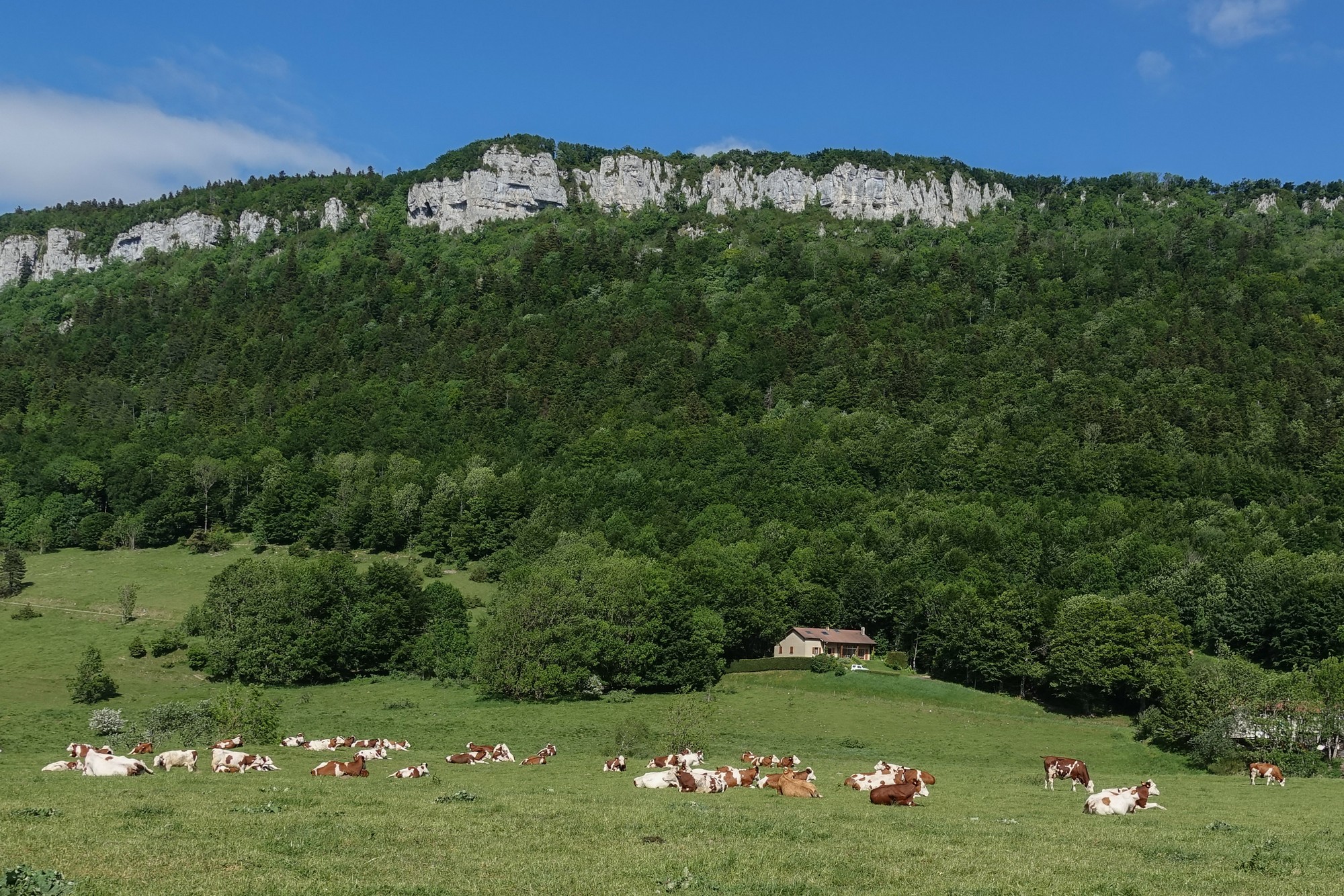 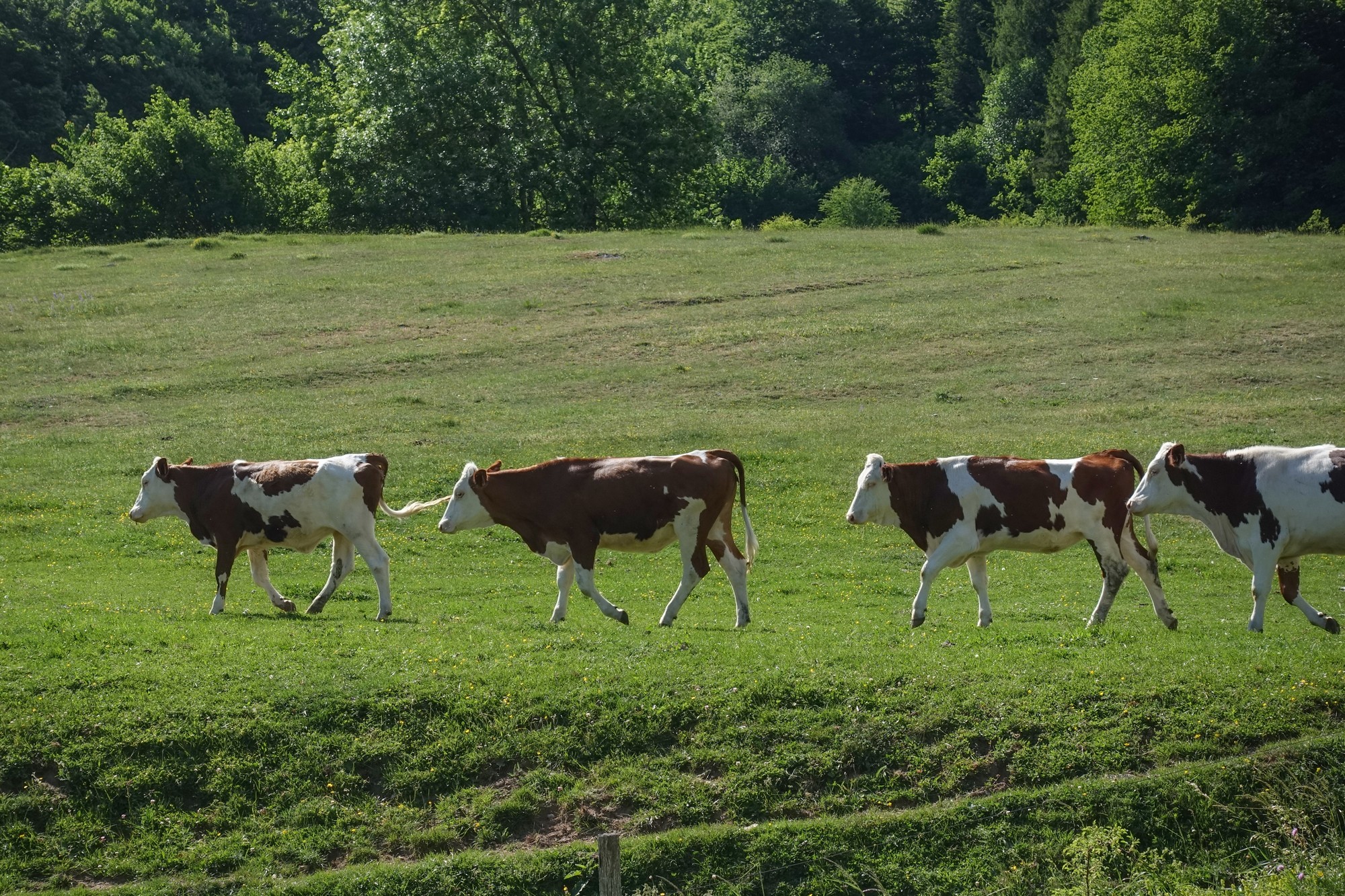 The next bit of road was a lovely descent following the valley of La Rivière de Léoncel. After six miles of enjoying that, I saw the turn-off for the telecom tower, le Relais de Musan. It’s not signposted – I had found out about this ‘secret’ climb from the internet. It’s essentially a service road that leads to a telecom/satellite tower that’s perched on the edge of the Rocher de Chantemerle.

The road surface is metalled the whole way, although covered in gravel nearly the whole way too, so there’s a bit of weaving required to find the best line. I’d read that you can get through the trees by the side of the tower and get a good view to the west of the Vercors over the Plain of Valence.

The road up here was ridiculously steep; in fact so steep that I couldn’t really stop because I would never have got going again. I did stop a few times when the road looked less steep, once to look at my phone and I saw that the gradient gets easier towards the top. I was grinding my way slowly up there. A couple of times I looked at my Garmin and saw 2.6 mph. I could have walked faster!

But I wasn’t really running out of energy too badly and my breathing was under control. In a couple of places the trees cleared to give a good view over the valley

A couple of cars came down, surprisingly. Another one went by in the upward direction when I was near the bottom and then a police car with lights flashing went by fairly slowly about half an hour before I got to the top.

I wondered what the police could be doing up there. I thought maybe someone might have tried to break into the radio tower.

The gradient did get slightly easier, mercifully. The road came to another road into the woods, with signs for footpaths. So maybe the other people up here were ramblers. 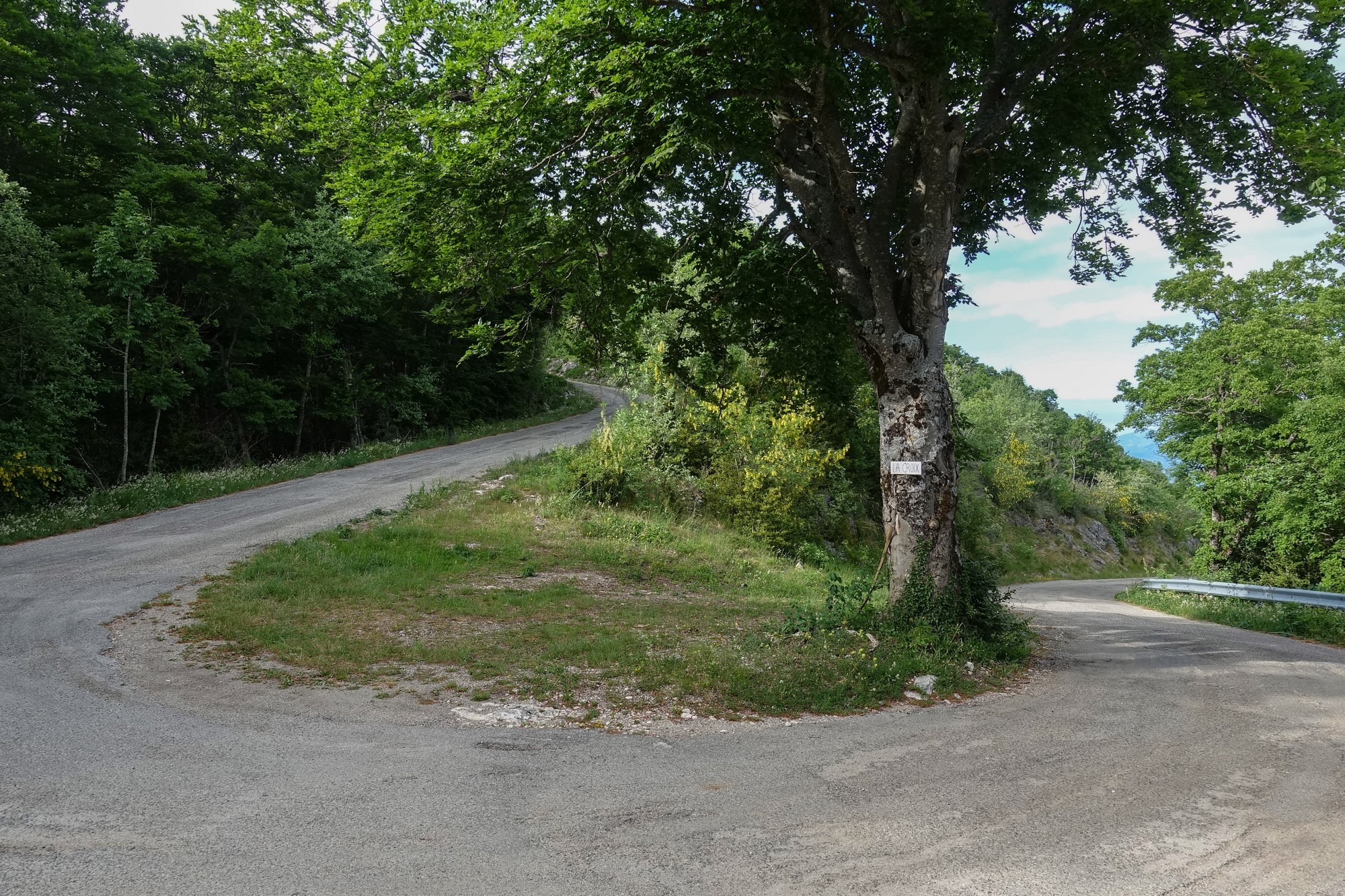 The forest opened out to pasture at one point and even descended slightly, past some disused farm buildings. Around a bend I saw the tower in the distance.

At least I now had a handle on how much further it was. But it went out of sight again as the road went back into the forest.

I kept looking at my Garmin hoping to see the end of the route on the screen, meaning the top was near. Just as I was about to stop, I did see that, so I carried on going to the top. 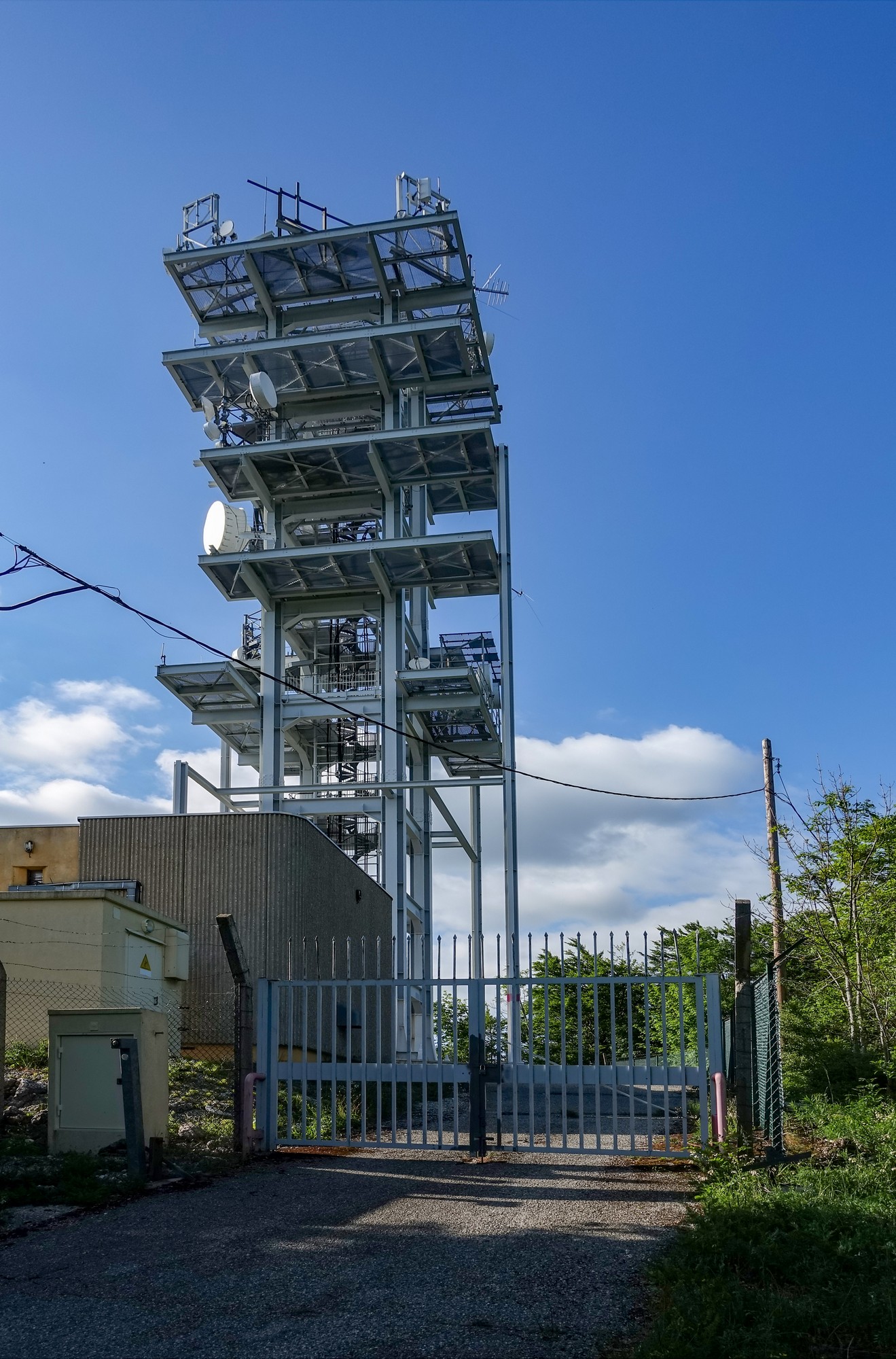 The police car was there by the gate to the tower, with the policeman was just standing there having a cigarette. I parked my bike next to a tree and went into the woods where there looked to be a well-trodden path. 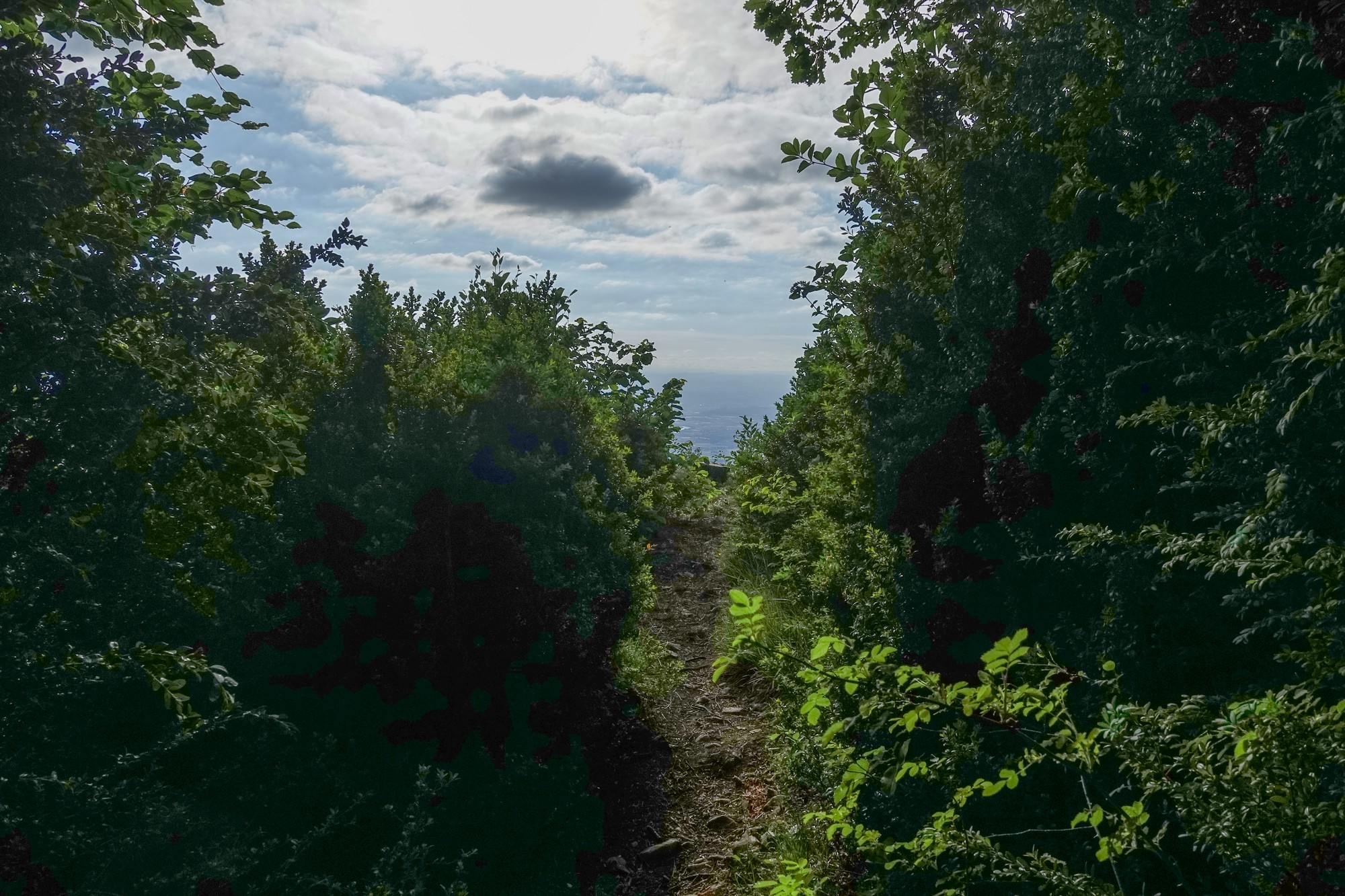 It led to the view that overlooks the Isère plain.

Basically you can walk right out to the edge of a sheer drop.

I got a few photos, but then I heard a car door slam and I was worried about the fact I’d left my bike back down near the road, so I went back to get it. The police were leaving. There’s still one other vehicle parked here but no signs of any owners.

I couldn’t leave that view after just one look, so I took my bike further into the woods and explored a bit more and got another few photos. 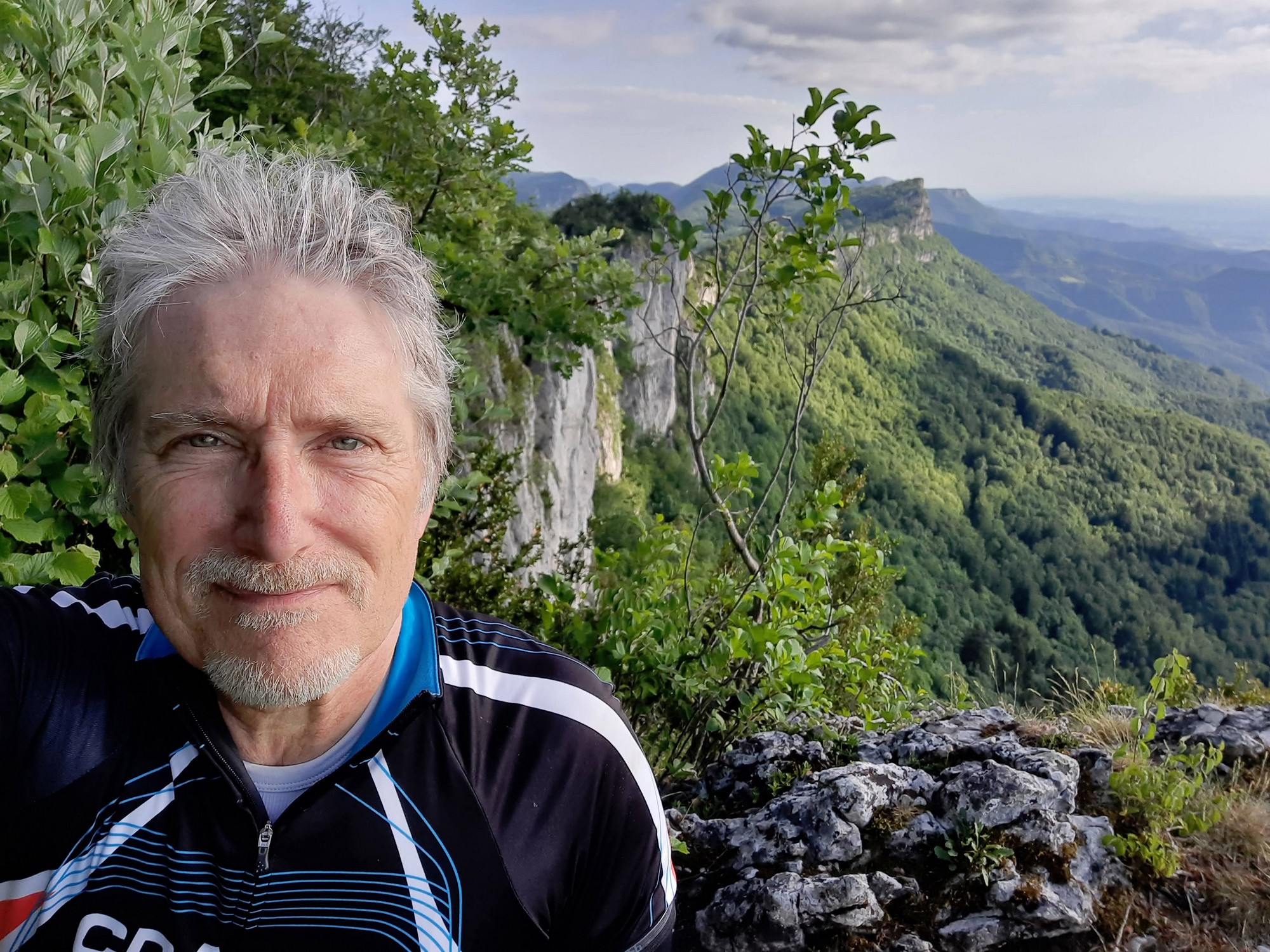 As I was standing at the precipice, I heard a creaking sound from above me and wondered what the hell it was, I looked up and saw a glider soaring in circles on the thermals. That must be an amazing experience. I’m just now ready for the descent, which I’m dreading because the road is quite gravelly, even though it’s gravel on tarmac. Luckily I’ve got the GT Grade because I think I’ll be on the brakes the whole way down. 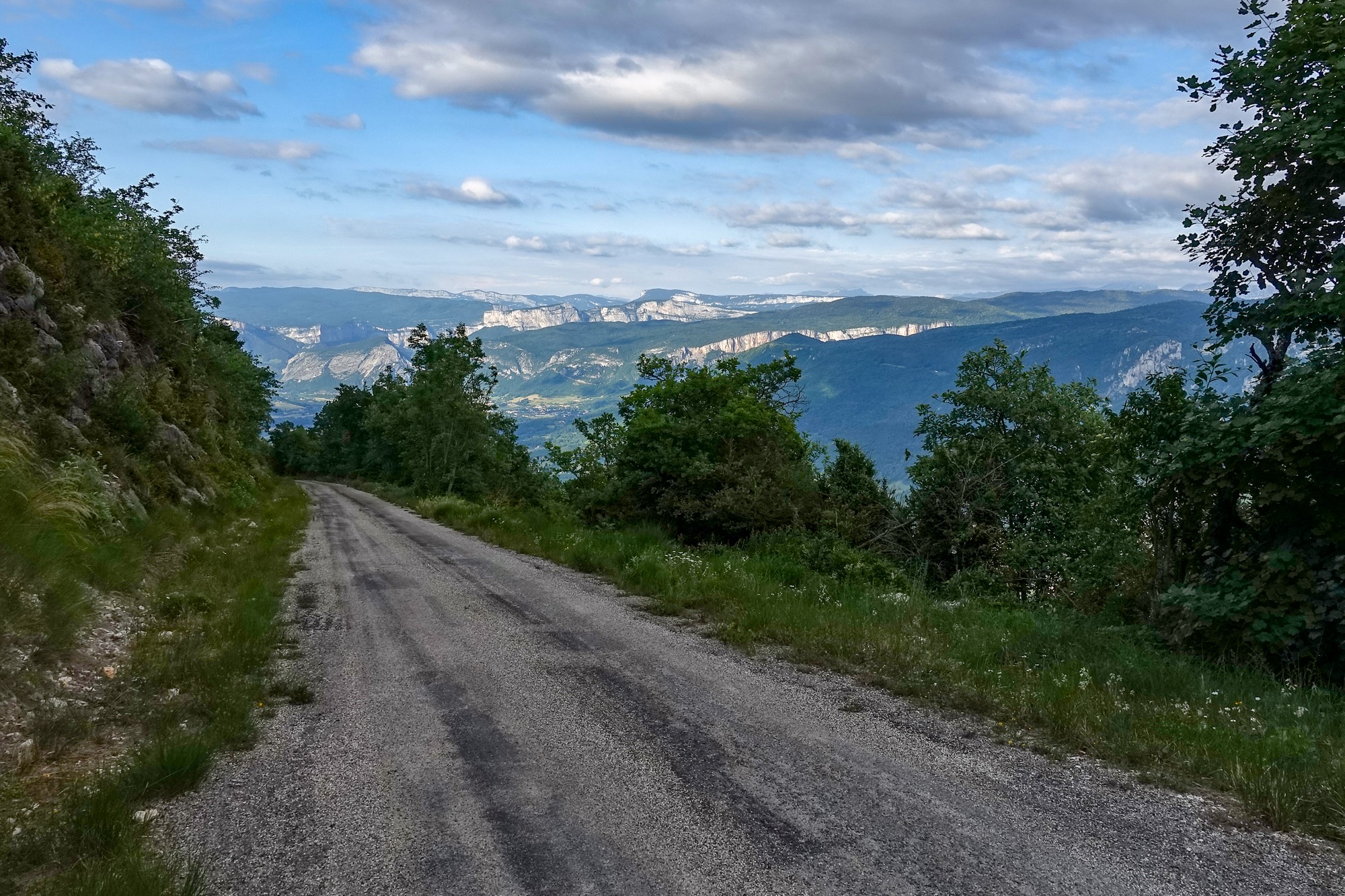 The descent was almost as slow as the climb. It was so steep I just couldn’t let go of the brakes except in a couple of places. I was wondering what the effect of having the brakes applied continuously might do to them. I was certainly glad I had disc brakes. I sometimes alternated between front and back to prevent them overheating.

Eventually the real road came into sight. The slow gravelly descent was over. Now  I could really let go on that main road that swept round fast bends as it descended towards Saint-Jean-en-Royans. It was absolutely amazing, with a perfect surface and next to no traffic. It was a lovely way to end a ride (NOT like my wet descent from col de l’Iseran).

When I got back I discovered that it had indeed been a public holiday here in France – Ascension Day. So that explained the festivities I’d seen. Regarding the Tour de France, I couldn’t initially find the exact route of this year’s edition, but then I discovered the following wonderful resource, with maps of every stage:

So stage 13 is the nearest, as it skirts the northern tip of the Vercors after it leaves Grenoble, but it doesn’t come anywhere near where I was today. So the excellent road surfaces are just excellent anyway!