I’m based, once again, for the third time, here in Saint-Jean-en-Royans, a great spot from which to explore the western side of the Vercors, although most of the massif is within the reach of longer rides from here. Always on the lookout for new routes, or the “path less (never) travelled”, I planned this route to climb to the Col de La Machine via the eastern flank of the Cirque de Combe Laval, and not via the usual, and totally spectacular, D76 balcony road on the west. For details of that route see here.

The name Cirque de Combe Laval contains two words that have the same meaning in English:

As can be seen from the route map, I cycled round the top of what looks like an elongated amphitheatre.

Between Saint-Jean-en-Royans and Saint-Laurent-en-Royans I had a view of the opening into Combe Laval (photo 1 above).

It was a sunny day but the air from the North East was cool and it was very, very breezy. The climb was much more spectacular than I’d expected. The views on the early stages over The Royans were amazing and really gave me a sense of how high I’d climbed. There was hardly any traffic, maybe two cars, and a few motorbikes.

Not far out of Saint-Laurent-en-Royans, I glimpsed up and saw the D76 balcony road high up on the western side of the combe walls.

I saw a sign saying that there were two tunnels coming up. This was a surprise as I wasn’t expecting any tunnels and I didn’t have either of my lights with me. Luckily they were quite short, 120m and 265m.

Just before the first tunnel there were good views over Saint-Laurent-en-Royans and Pont-en-Royans. Photo point number 4 on map above. 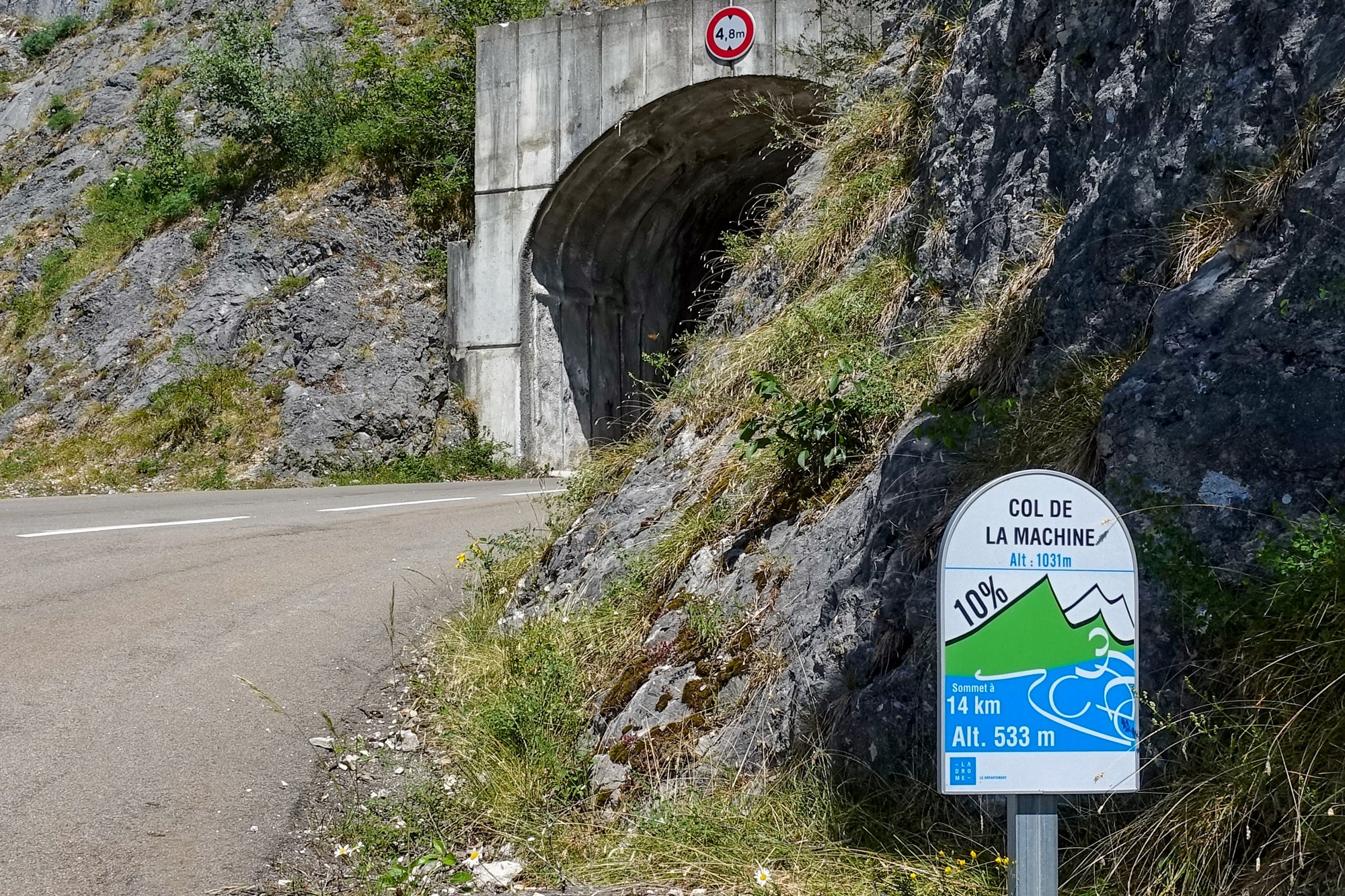 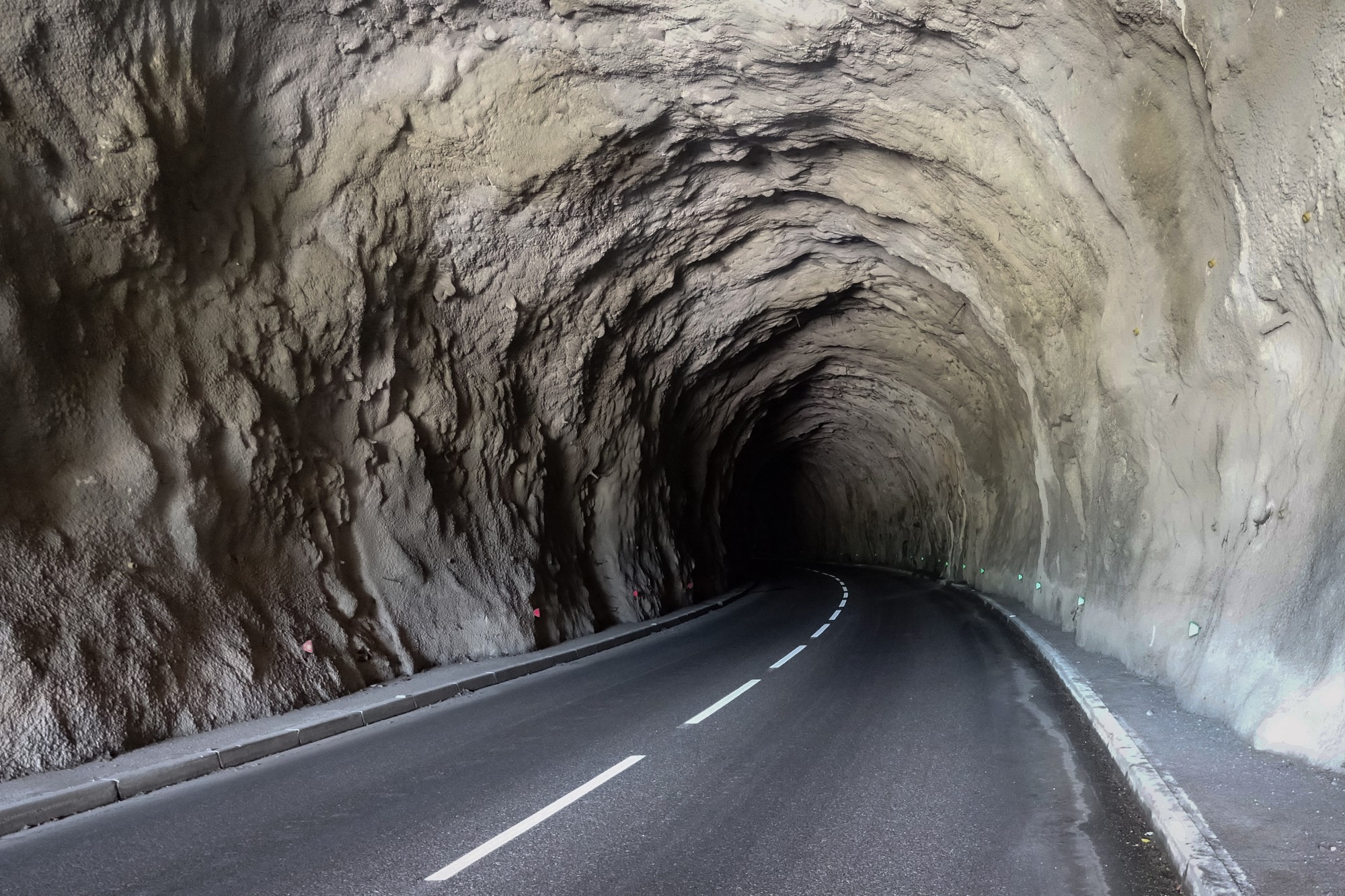 I took my shades off in the tunnel and was able to see OK with the light coming from each end of the tunnel. There was absolutely no traffic around anyway so it didn’t matter too much. It was very cool in there.

The effort of the climb had worked up a sweat, but the cold air was chilling when there was no sun around, so it was a mixture of being either hot or quite nippy.

The climbing effectively ended a couple of miles before the col.

When planning this route I had used Google Streetview to search the stretch of road along the eastern ridge for a possible view across the cirque, but never found anything.  So I wasn’t expecting there to be a place where you could view the balcony road on the other side – the D76. So imagine my delight when the road came to a clearing right on the edge of the cliff, on this side of the combe. There’s a space where you could park a campervan or something – some people have had barbecues by the looks. In fact I’d like to see this spot from the air because I think it’s right on the edge of a sheer drop – maybe it’s visible from the road on the other side. In fact it must be, obviously.

So these photos are from point 5 on the map. 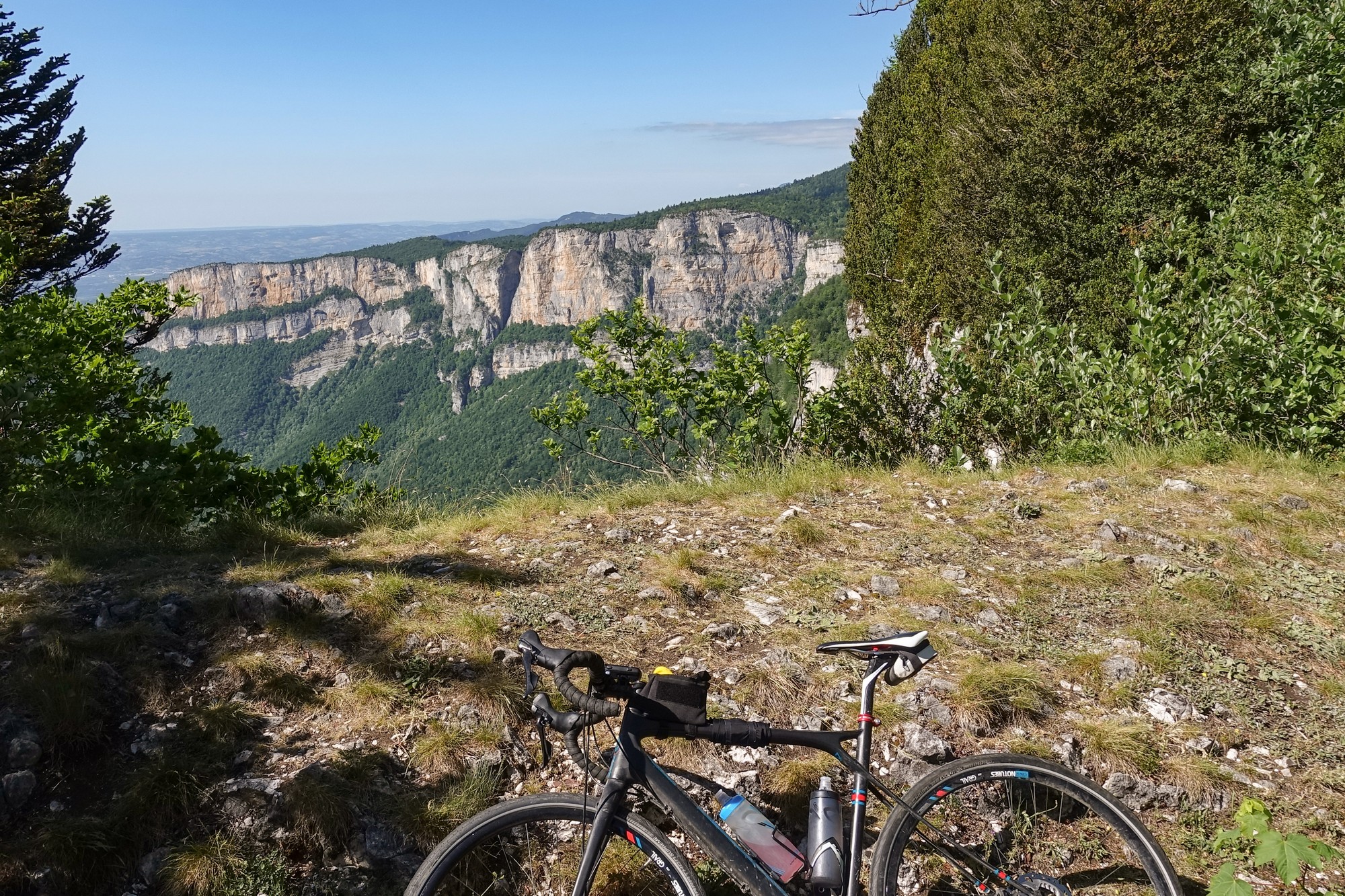 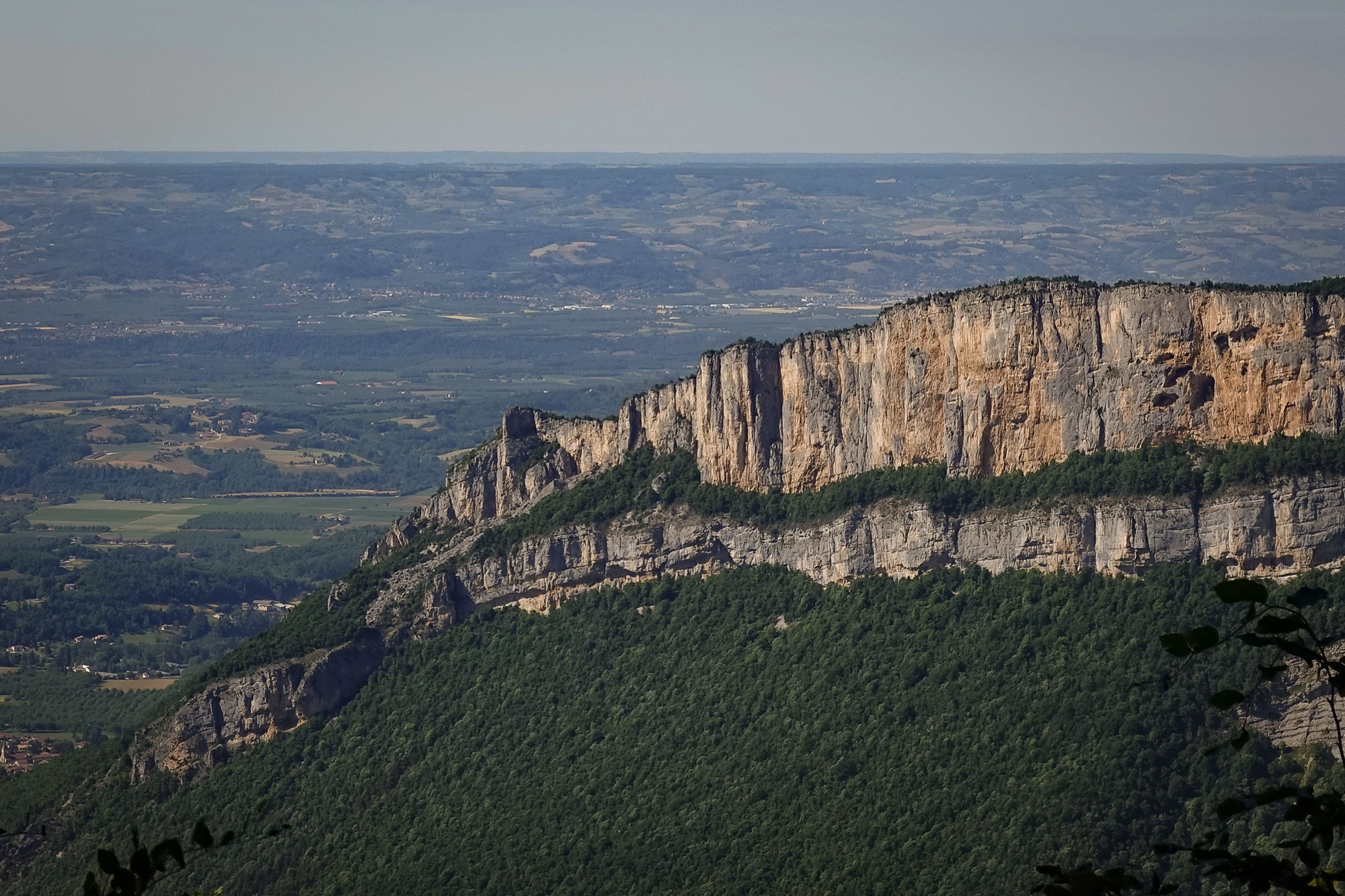 I took the opportunity at that vantage point to eat my ham and Dijon mustard sandwich. I’d had one energy gel coming up the climb. The ascent felt easy to me even though it had steeper sections than the equivalent climb on the other side. The road is really wide with an excellent surface. I’m sure it would make a spectacular descent. Maybe I’ll try that one day.

The day had started off with dull grey cloud cover, so I’d waited until later in the day to start the ride, as the forecast had predicted it would be sunny later.

Shortly after that stop was another area with an amazing view over to the other side. You could walk through some shrubbery, right out onto a precipice. The strong breeze made me feel rather uncomfortable near the edge. I got some shots. 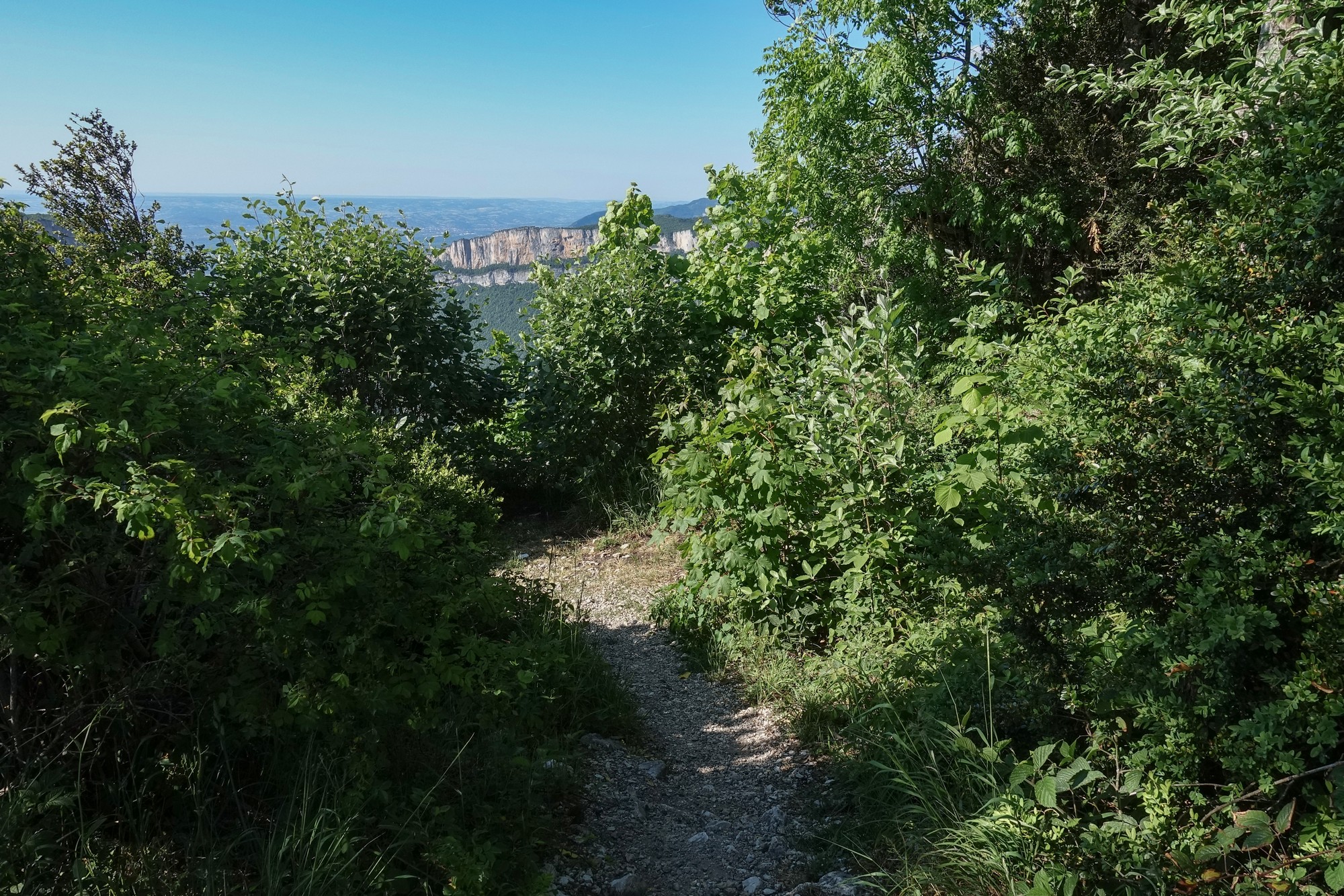 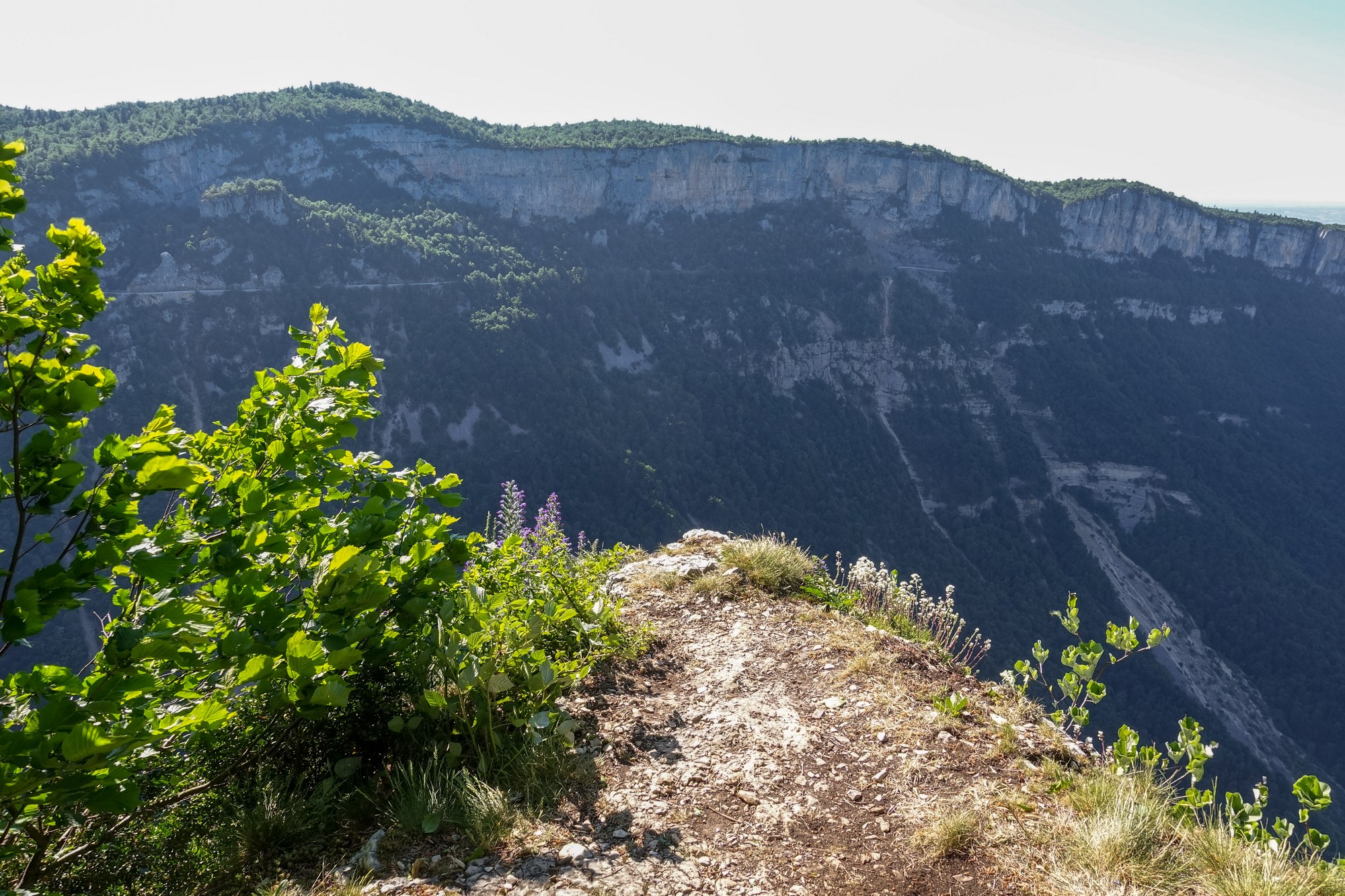 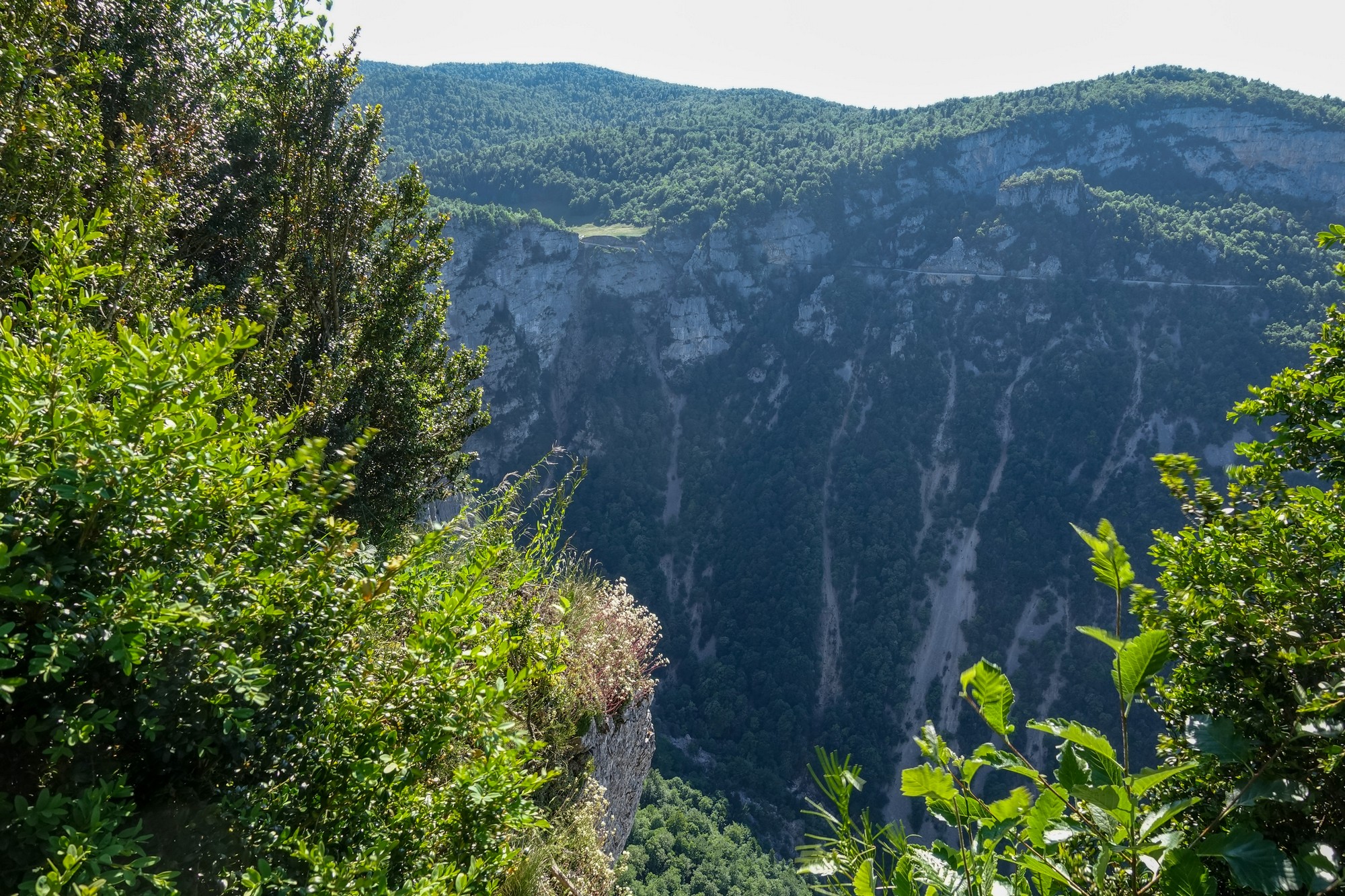 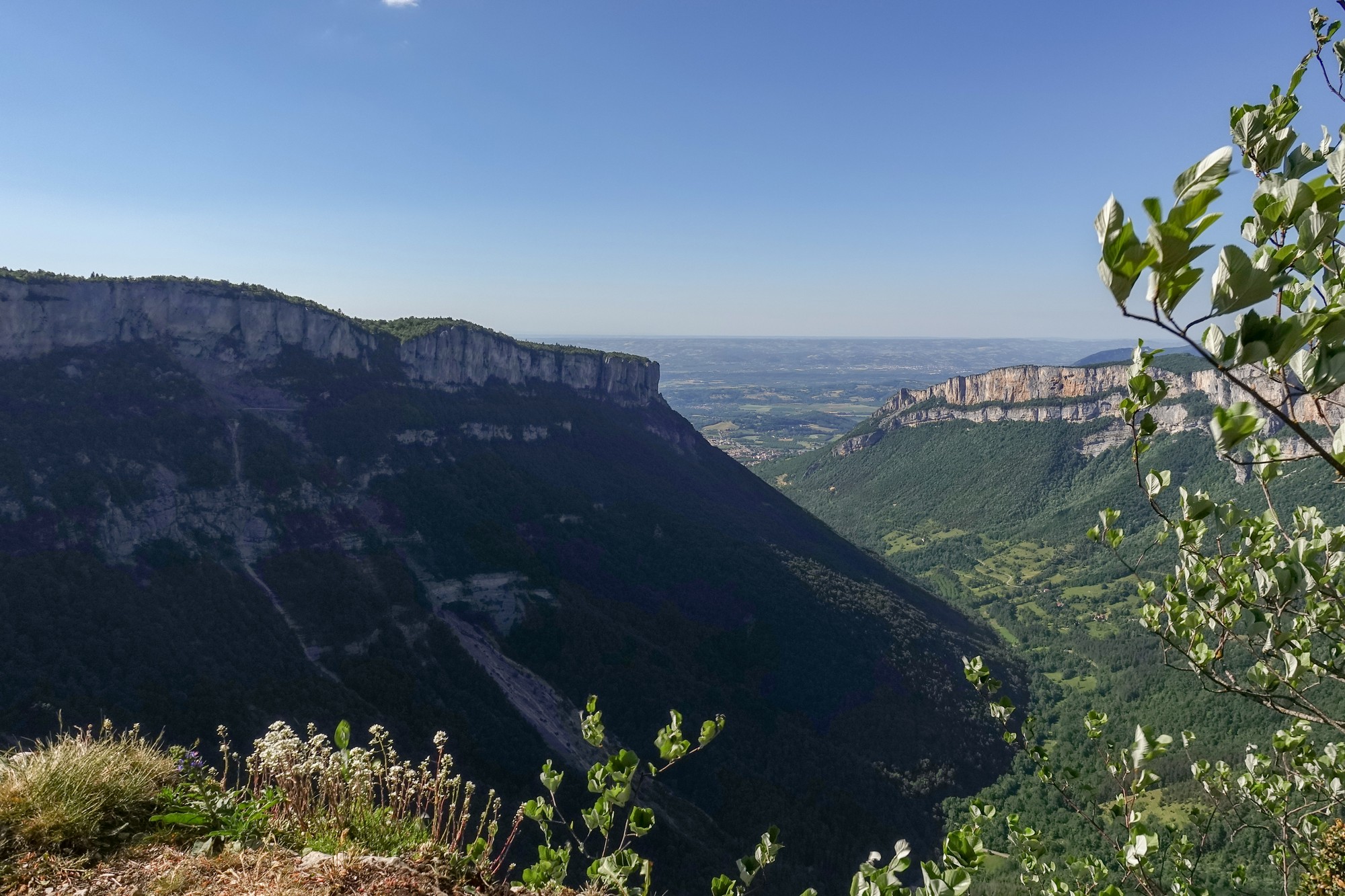 That NE air, combined with the lowering sun made me start feeling uncomfortably cool, and the strong breeze didn’t help. So when I reached the col de la Machine, I made the unusual decision to cut the ride short and miss out the second loop of the figure-of-eight-shaped course I had planned. Another factor in the decision was that I’d previously done that second part of the route anyway. 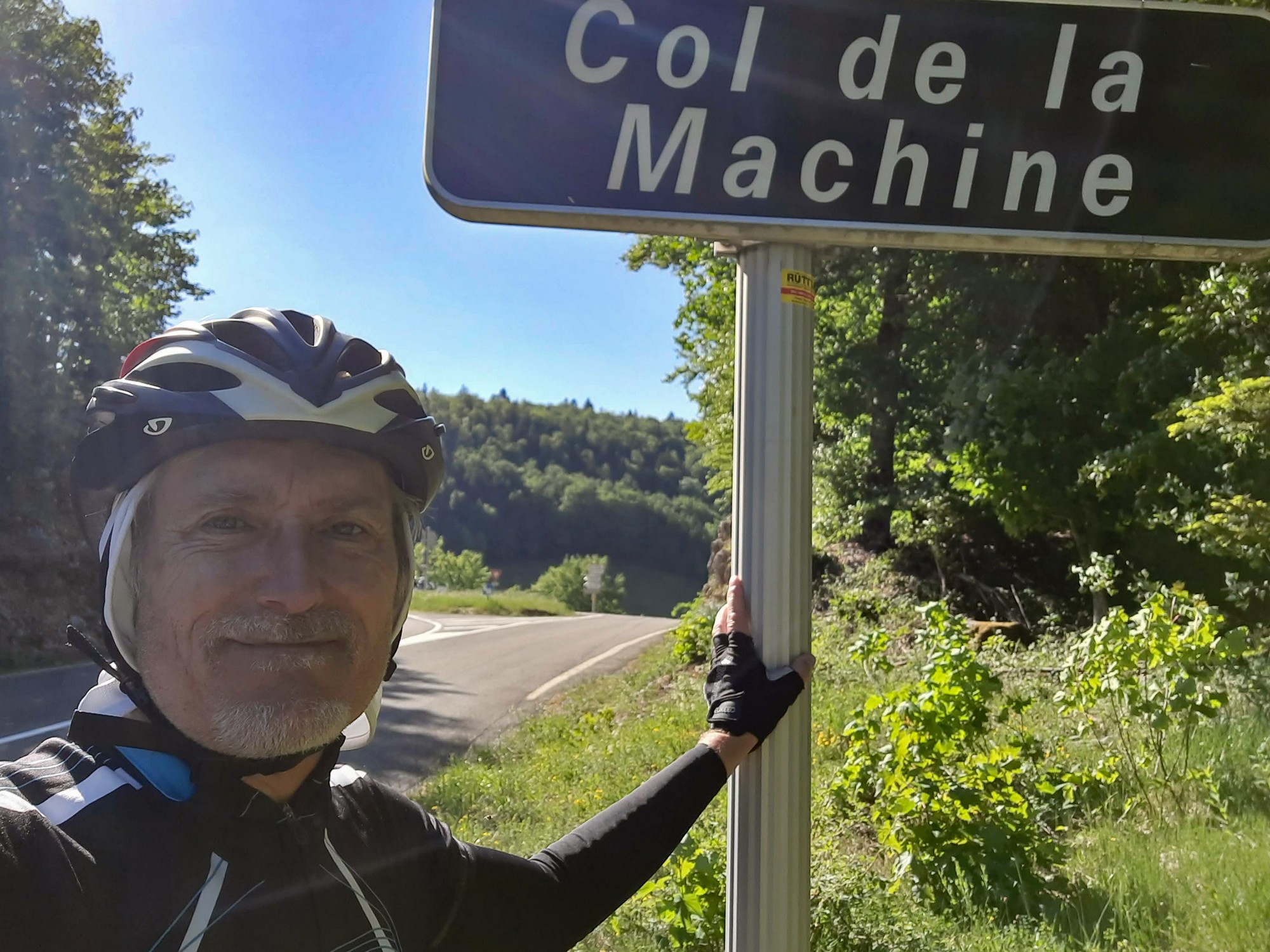 So I rode on to the turn-off for the col de l’Echarasson. 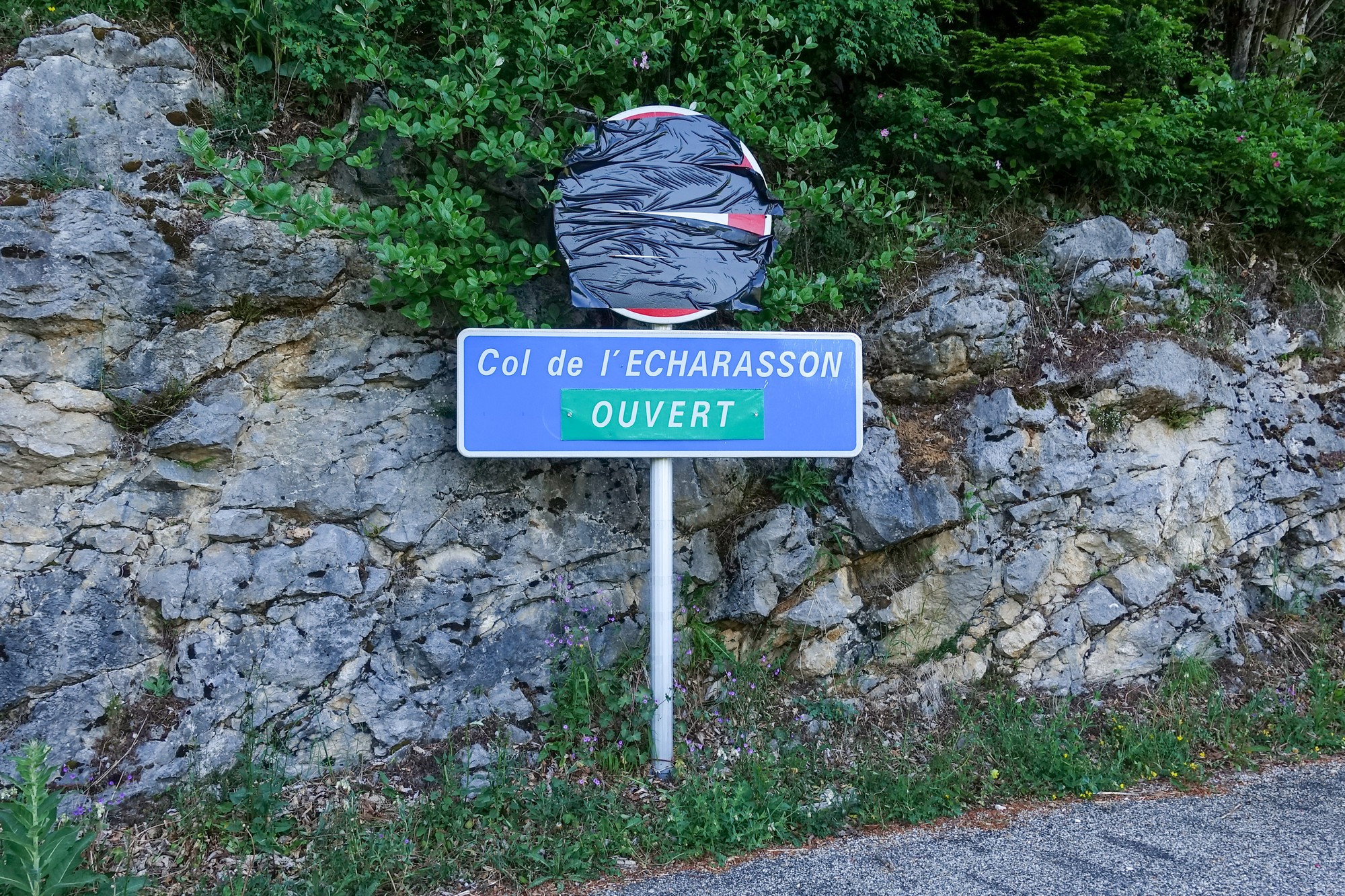 That was an extremely peaceful road. That’s not surprising really, as it bypasses the spectaular D76 Cirque de Combe Laval road. The road climbed gently, mainly through forest, to the col, where there was a clearing. 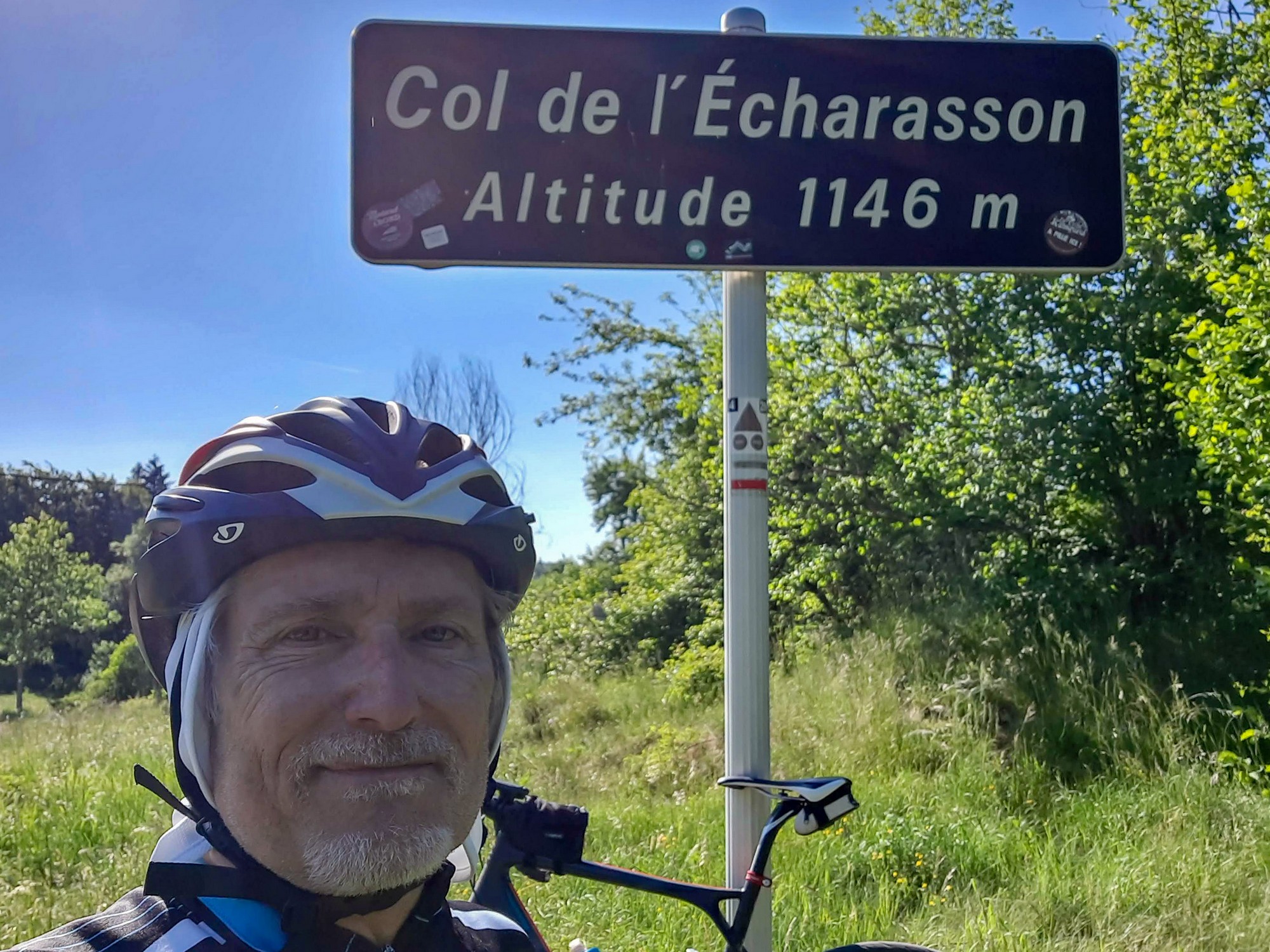 The rest of the ride was back down through the forest to the D76 and then a fast descent down to base, again marred somewhat by the gusty wind and the cold air, but still a lovely fast descent with only one car passing me the whole five miles.

Aside from the chilly weather it had been another great ride in the Vercors. There is still so much more for me to explore here. Even since this ride I have spotted on the map a trail that seems to go near the edge of the combe – I could explore that on my gravel bike maybe the next time I’m here.

One thing that struck me later was the question of why the balcony road section of the D76 was laboriously carved out of the rock face back in the 1890’s, when there was already a road between Saint-Jean-en-Royans and the col de la Machine via col de l’Echarasson. It seems to me that it was built for the sheer spectacle of it, which would be typically French. Whatever the reason, I’m glad it’s there and I can barely believe that I went right past it on today’s ride without taking a third look at it while I was so close! I will be back!