The Col du Petit Saint Bernard is one of the passes linking France and Italy across the Alps. Its Italian name is Colle del Piccolo San Bernardo, which I think is nicer.

I came out today with the knowledge that the Col du Petit Saint Bernard was closed and also that it was going to be 30°C at the bottom and about 14°C at the top. At least that’s what the internet said…

So I took my arm warmers, rain jacket and wore a base layer for what might be a cold descent.

I’ve stopped here at the Belvedere Hotel which is about halfway up the climb at 9½ miles. The sun is blazing down and there’s not much in the way of shade.

Shortly into the ride I saw a sign that said the col was open.

I was a bit disappointed, as I’d had visions of there being no cars on the road and also seeing some snow walls at the top. I’d been intending to go as far as I was able to, but now that I know that it’s open I realise I’ve got no choice but to do the whole thing.

I’ve been stopping frequently to cool down. There’s no way I’m going to let the sun get to me this time, after suffering on my previous ride. 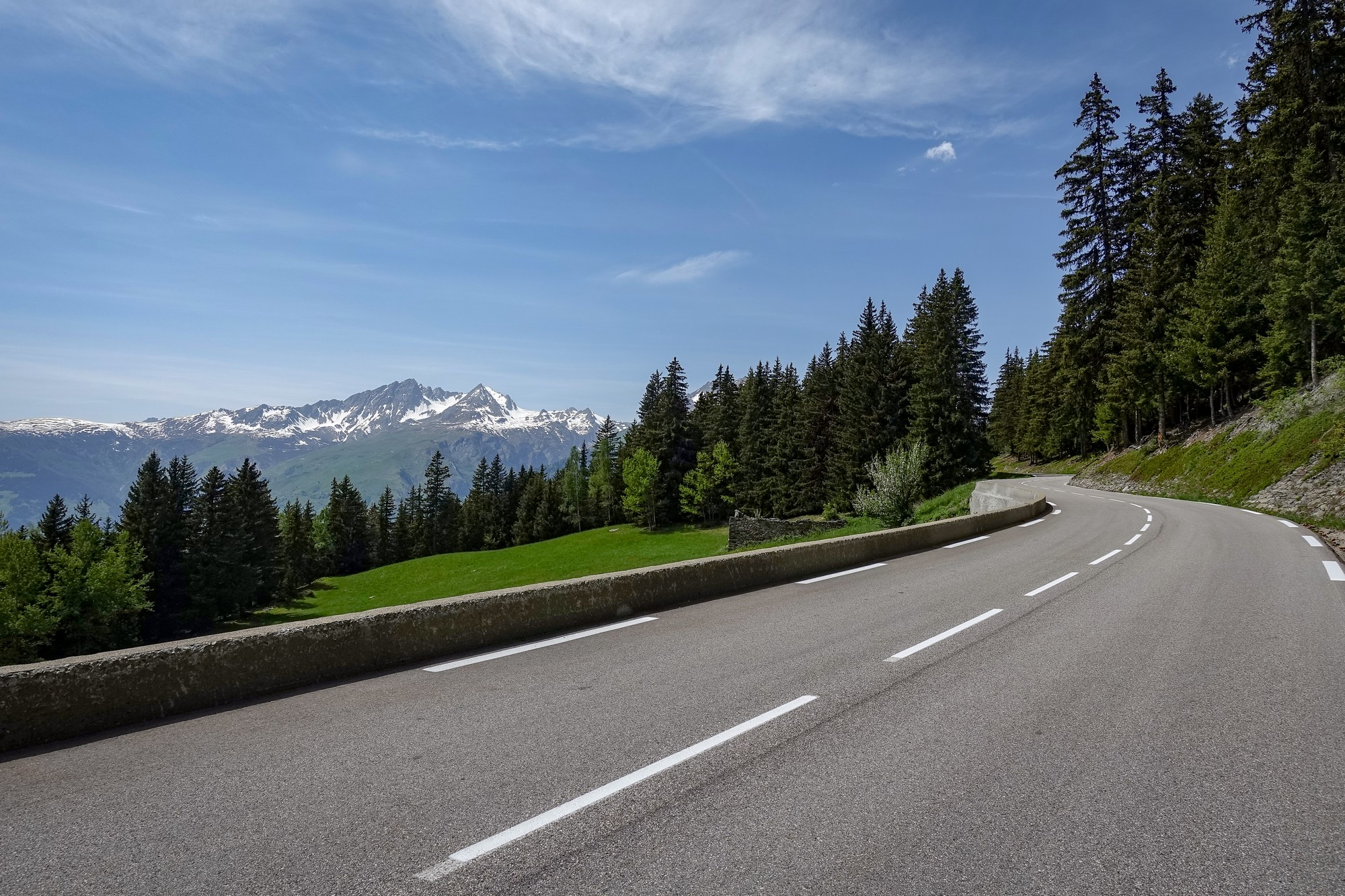 It’s amazing how much more refreshed I feel after just a couple of minutes of cooling down. I’m hoping that as I get higher the air gets cooler. In fact it feels a bit cooler already, but that isn’t preventing me from burning up on the exposed sections. I’ve got an idea that there’s a very exposed end bit to this climb.

I’m sitting on the ground leaning against a wall that’s offering a small amount of shade as I dictate into my phone.

The breeze has picked up significantly, frequently helping me, and I really hope it won’t be in my face on the final straight section. Since the last report, the sun went a bit hazy and it was much easier to go longer distances between stops, especially as the air was getting cool as well. Now I find myself stopping more frequently again. I’m really low on energy and just want to go asleep really. So far I’ve had two energy gels and my sandwich. I’ve got two more energy gels scheduled for 13 miles and 16 miles. The Porsche Owner’s Club must be out for the day. I’ve seen, in several groups, what must have been at least 40 Porsches of various kinds. Some of them attempted to drift around the switchbacks, but rather pathetically just overcooked it, then eased back then repeated. 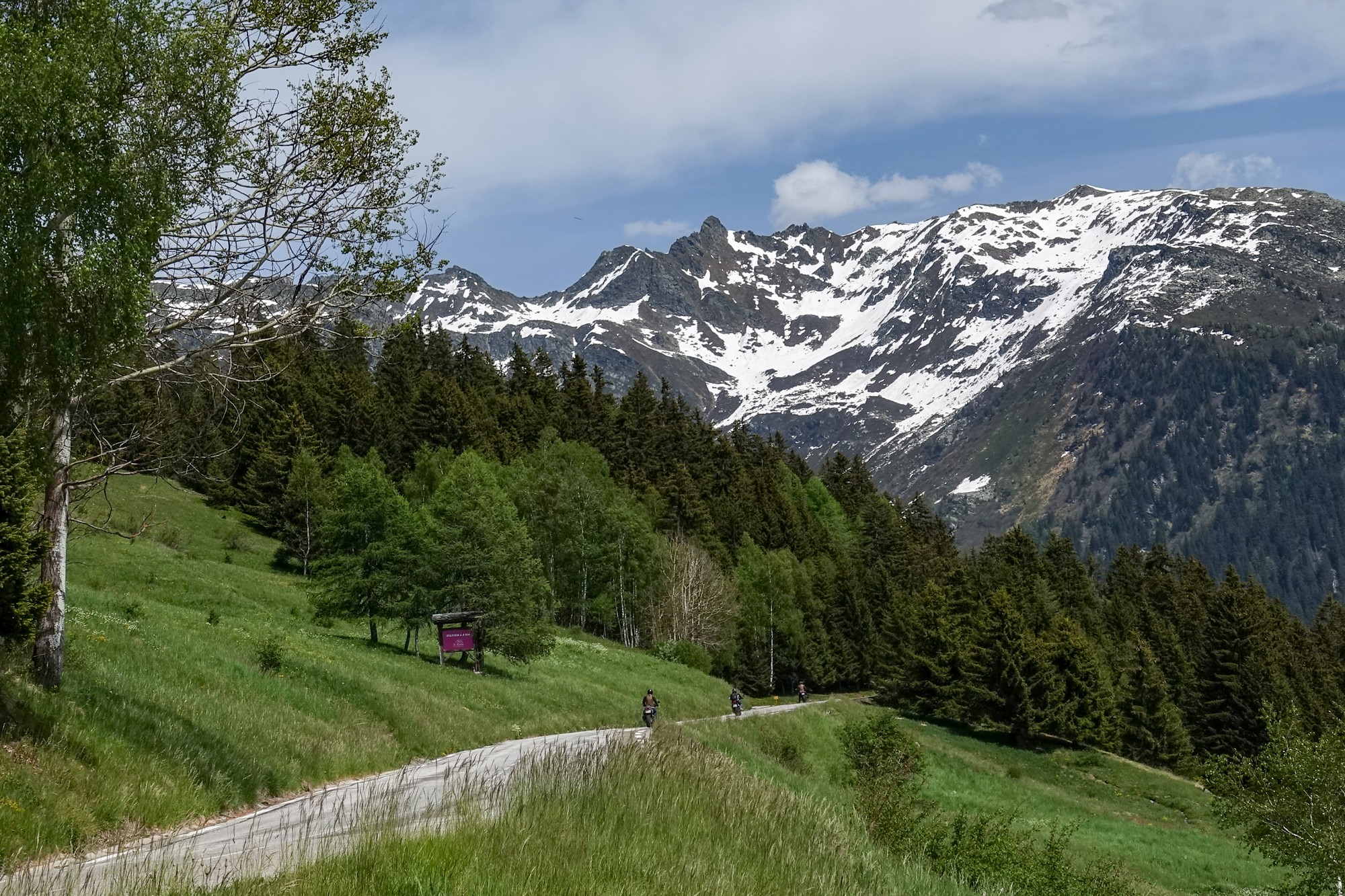 I stopped when I saw a fast-flowing vertical stream of water at the side of the road. 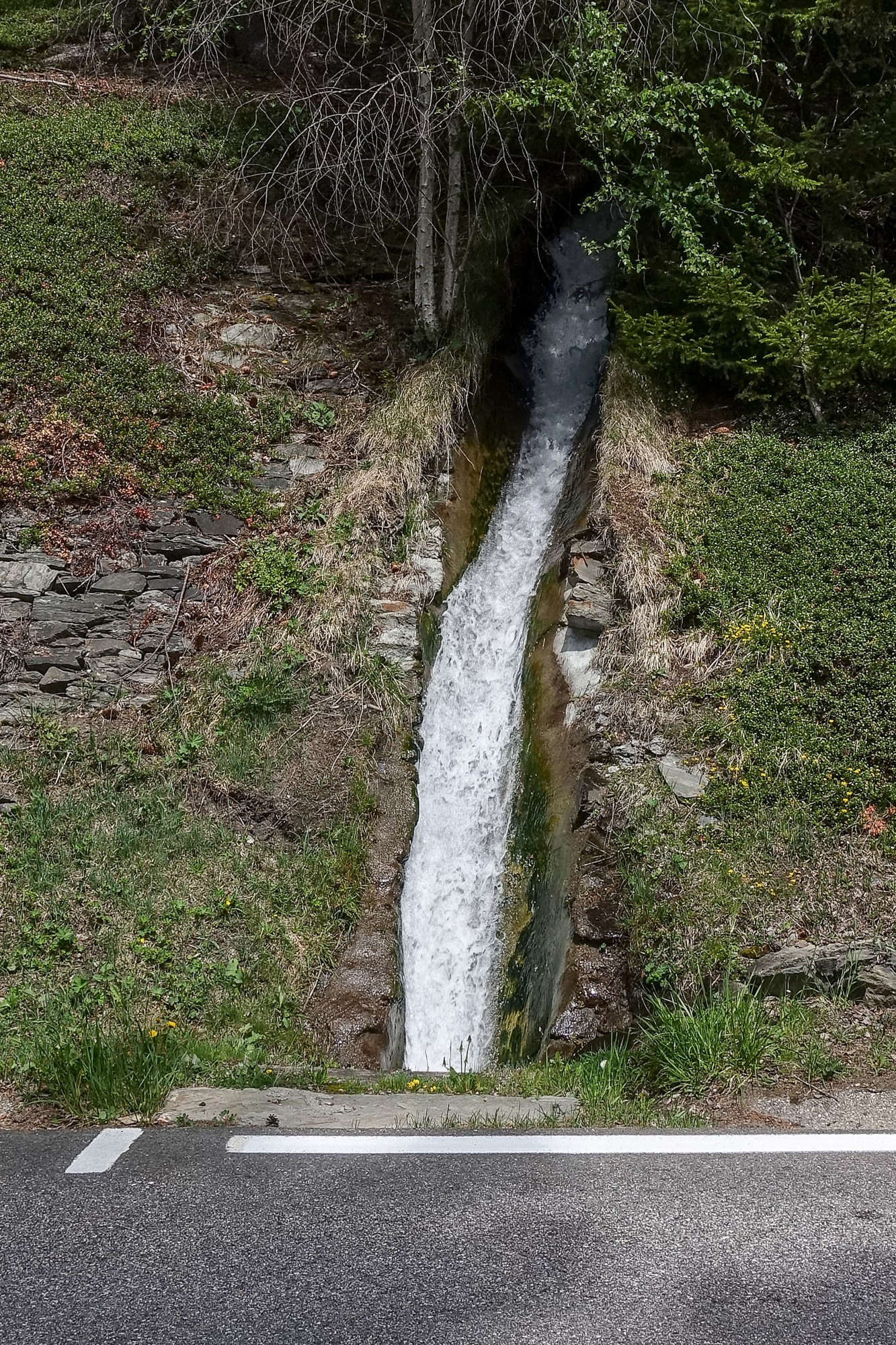 I drank fully my bidon that was nearly empty, leaned precariously over the stream and hanging tight onto my bidon thrust it under the rushing water. I wasn’t sure if it was drinkable but thought I could use that for pouring over my head, which I proceeded to do on several occasions. I made sure I took my glasses off first. One time I took my helmet off too and poured it right over my head.

A guy just stopped and chatted while I’m sitting here. I said je suis très fatiguée. He asked me if I had water. I said yes and he told me there’s a fresh water tap just up the road that would be fresher, so that sounds good. Also he said that the climb gets easier from now on, although I’m not sure about that. He said the scenery gets better too. I said I hope the wind isn’t in my face but we both realised that it probably will be.

Just after thanking that guy, I found the tap of which he spoke.

I emptied both my bidons of their warm contents and topped up with fresh cold water and drank quite a bit extra. As I was doing that, the same guy appeared again as he got into his car.

He had been right about the gradient too. It was easier from then on.

I saw my first bit of roadside snow just outside La Rosière. After that, there was more and more, the meltwater gushing loudly everywhere. 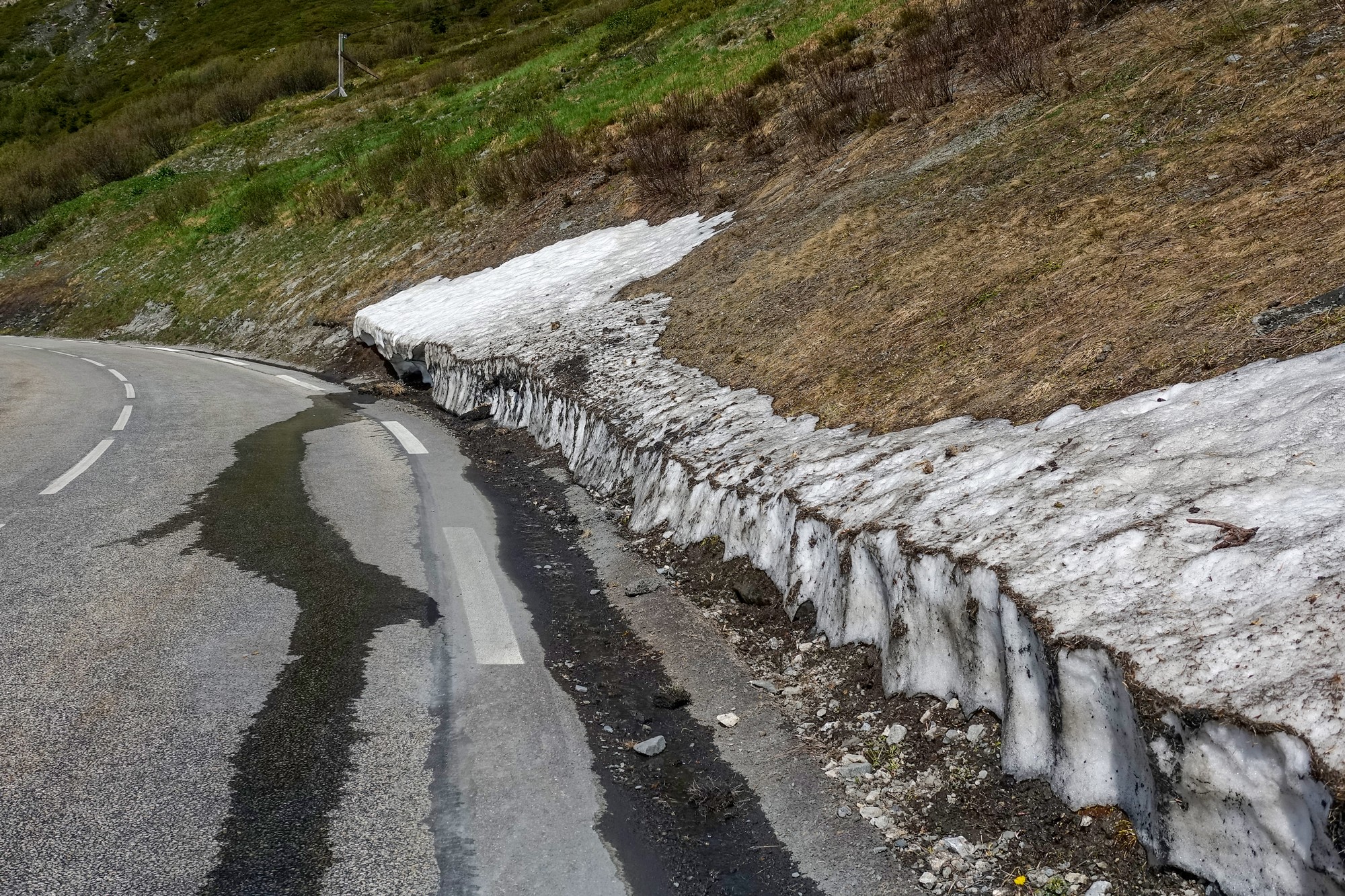 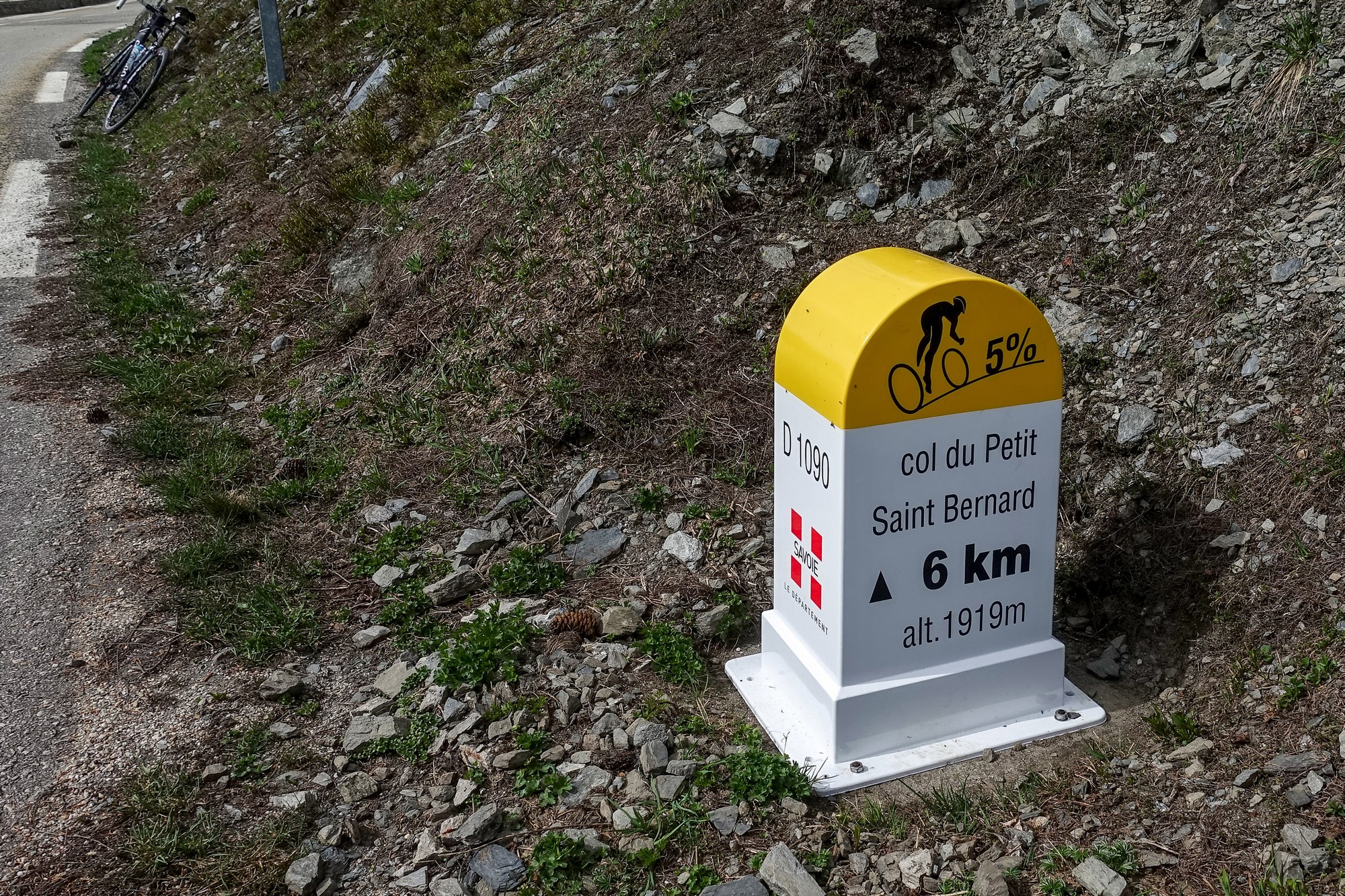 About half a mile after La Rosière, the road turned a bend to reveal the end in sight, still nearly four miles away. 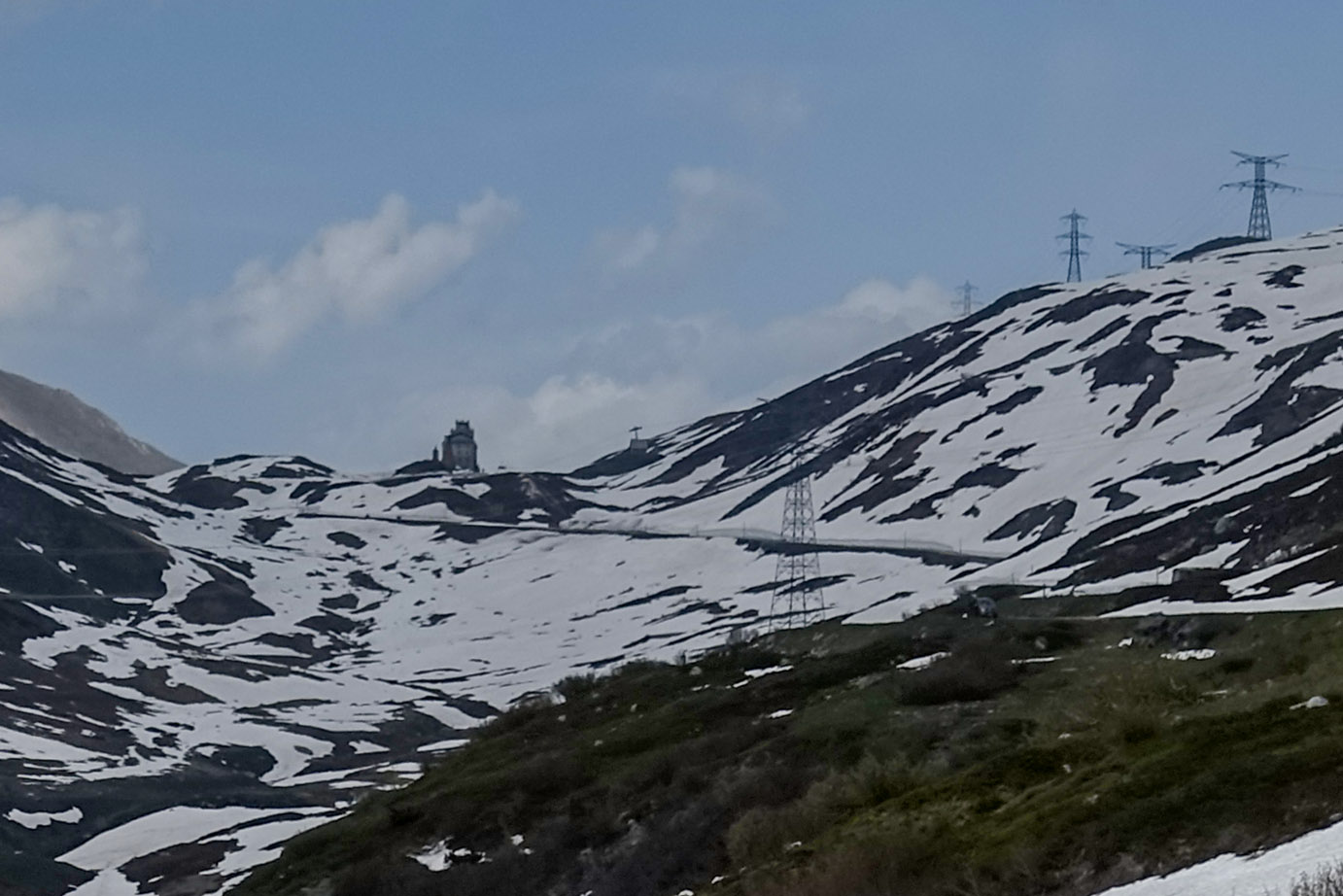 The miraculous thing was that I had a strong tailwind helping me up to the col. That, and the fresh water really helped. It was still tough when the sun came out, but it started getting hazy, which helped. 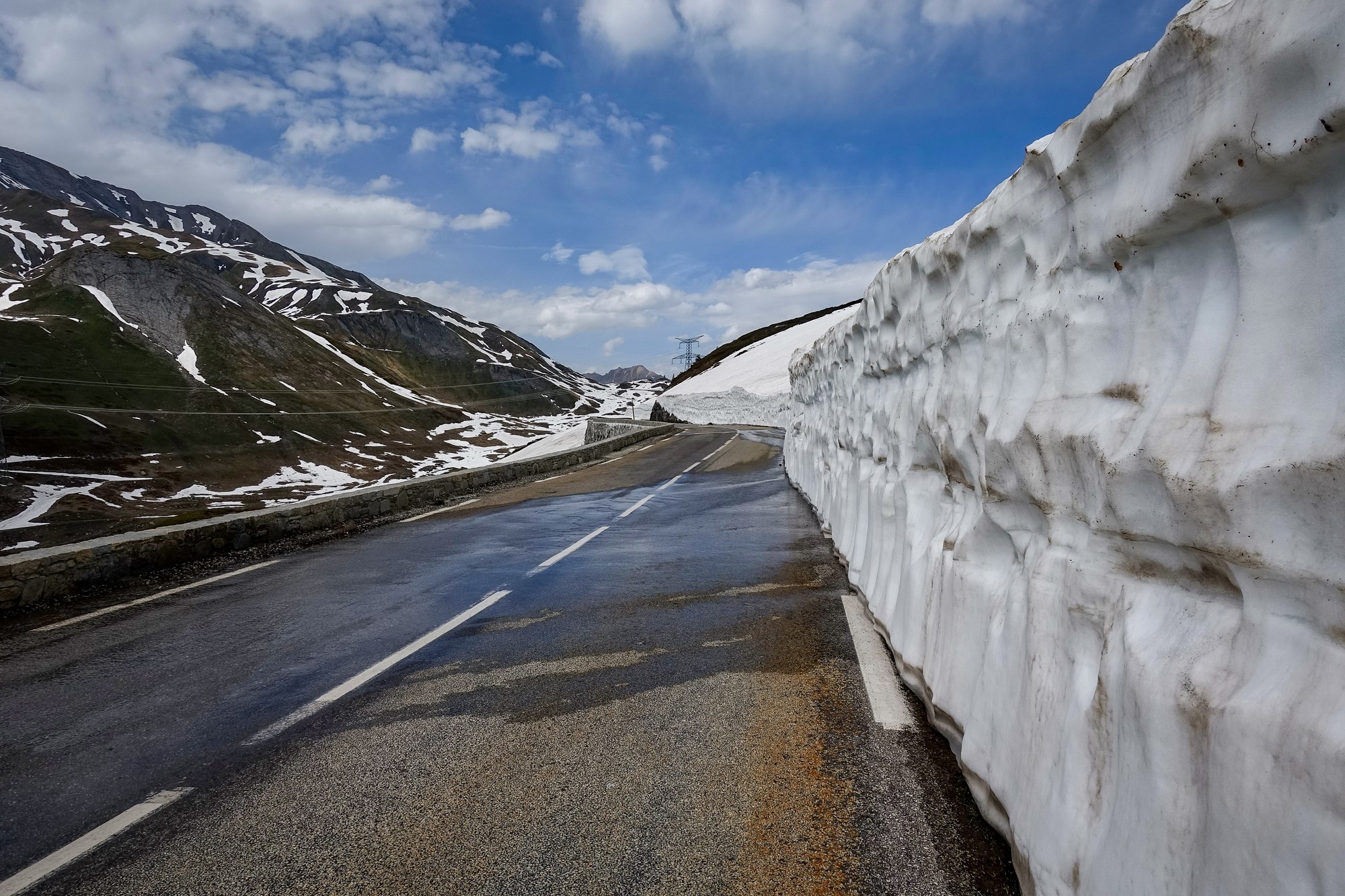 Eventually I made it to the building I could see. Something in the back of my mind told me that the col is further on from that, and it was. Up at the col I got some photos. 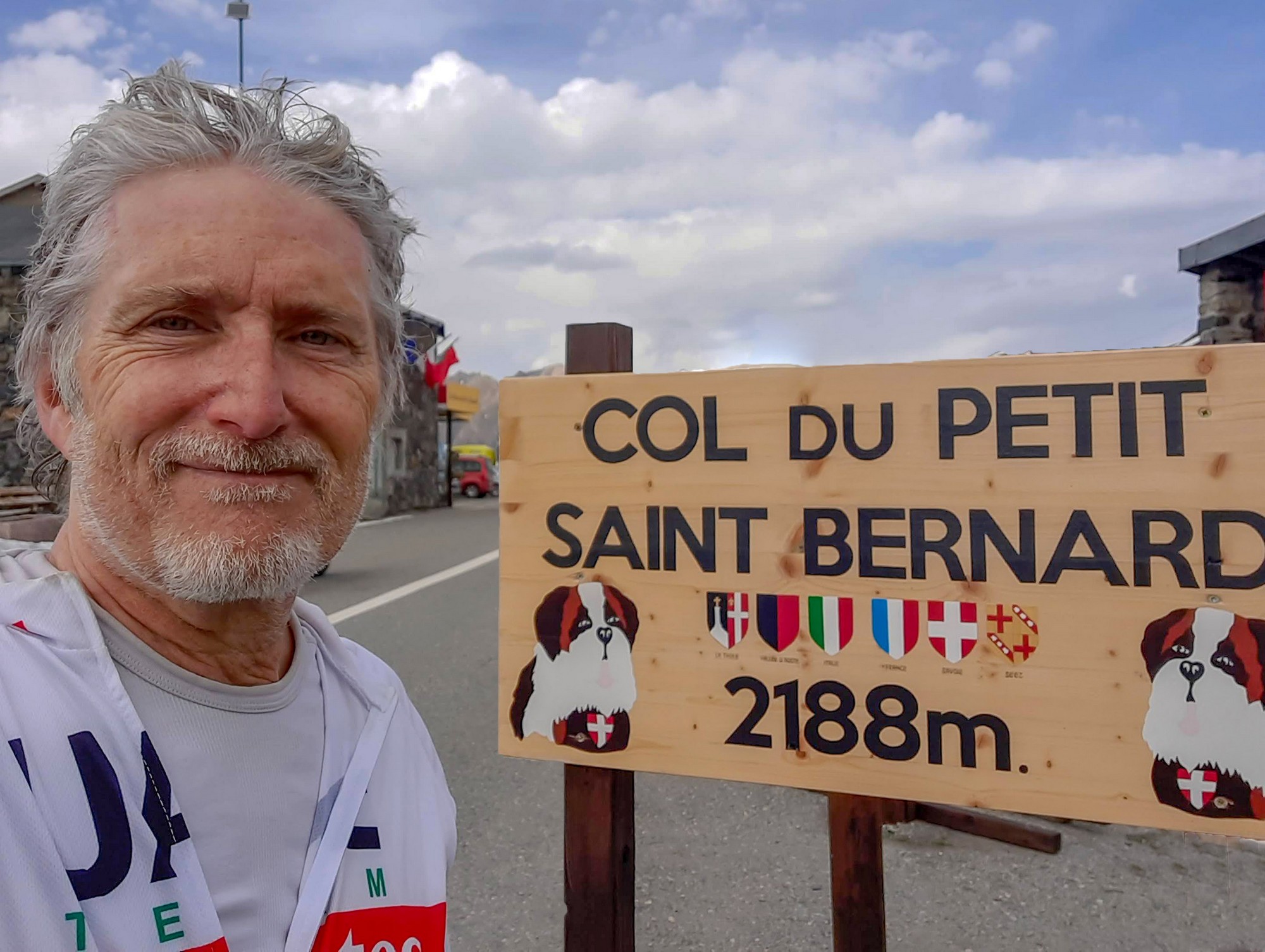 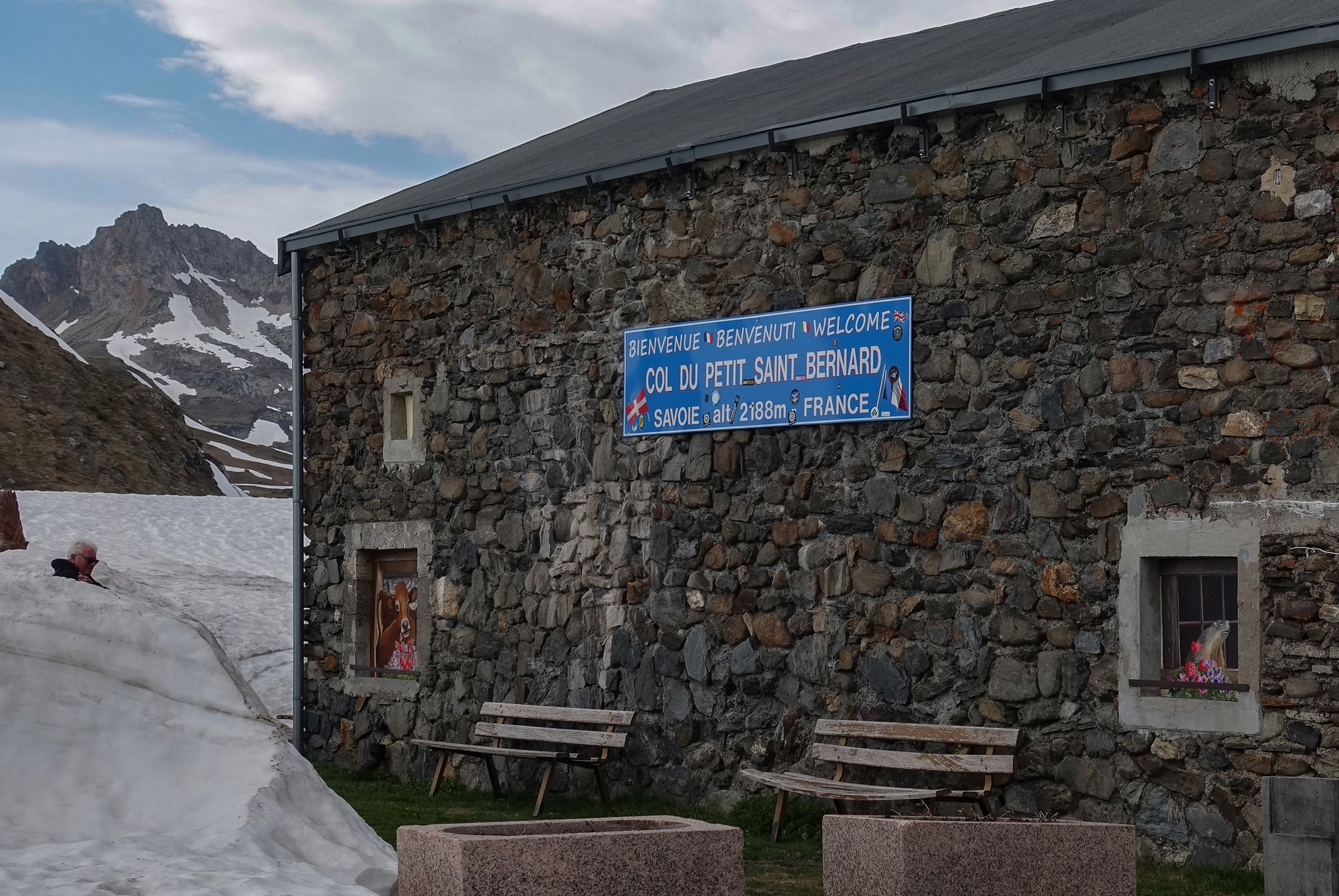 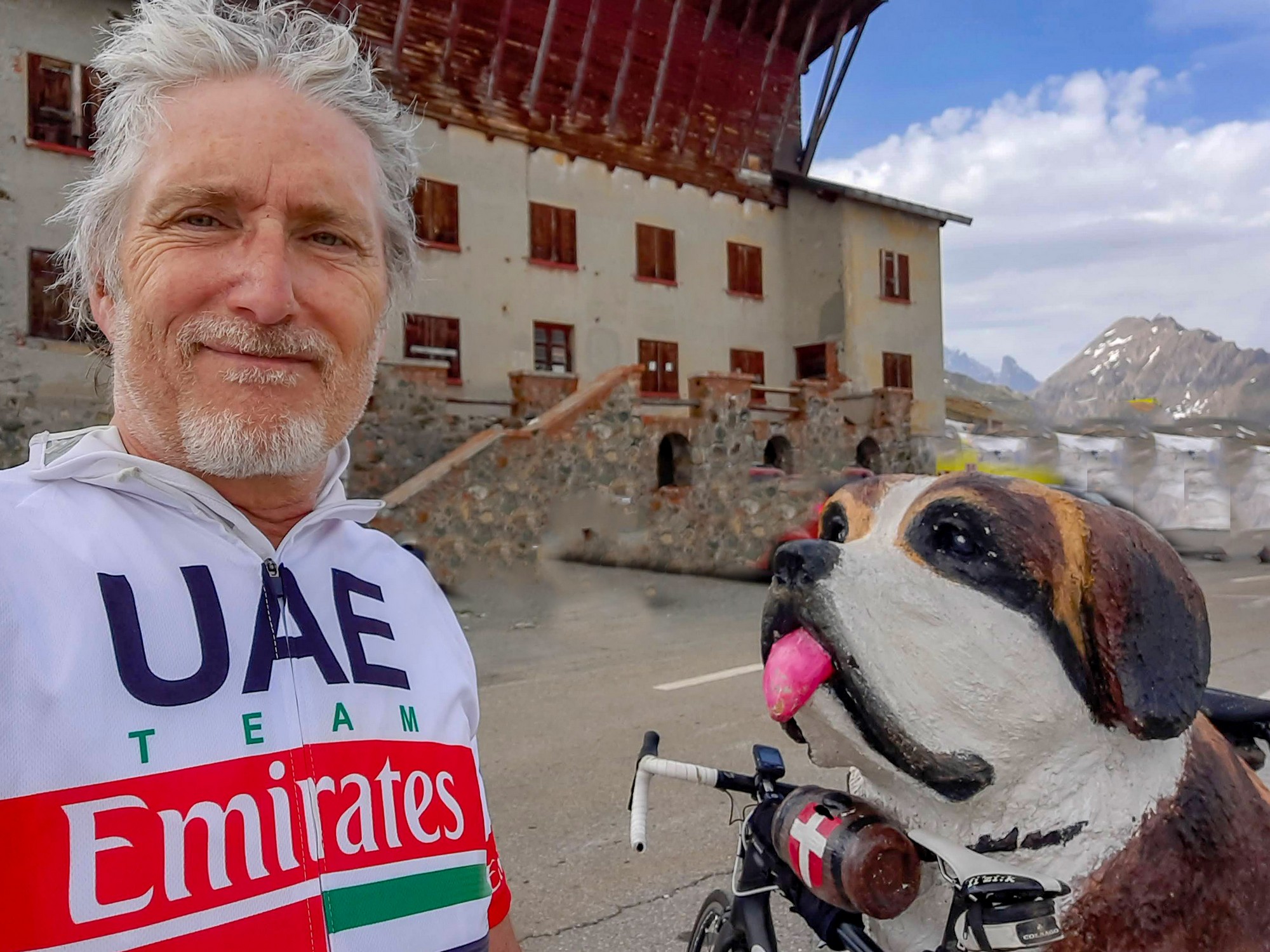 As I was getting a photo next to the Saint Bernard dog, who should drive up and say hello from his car window? The same guy I’d seen earlier back down in La Rosière. He said well done. I thanked him again for his help. Thinking about it later, he’d had all the signs of being a guardian angel!

I rode a bit further to the Italian border and put my arm warmers and rain jacket on, ready for the descent. 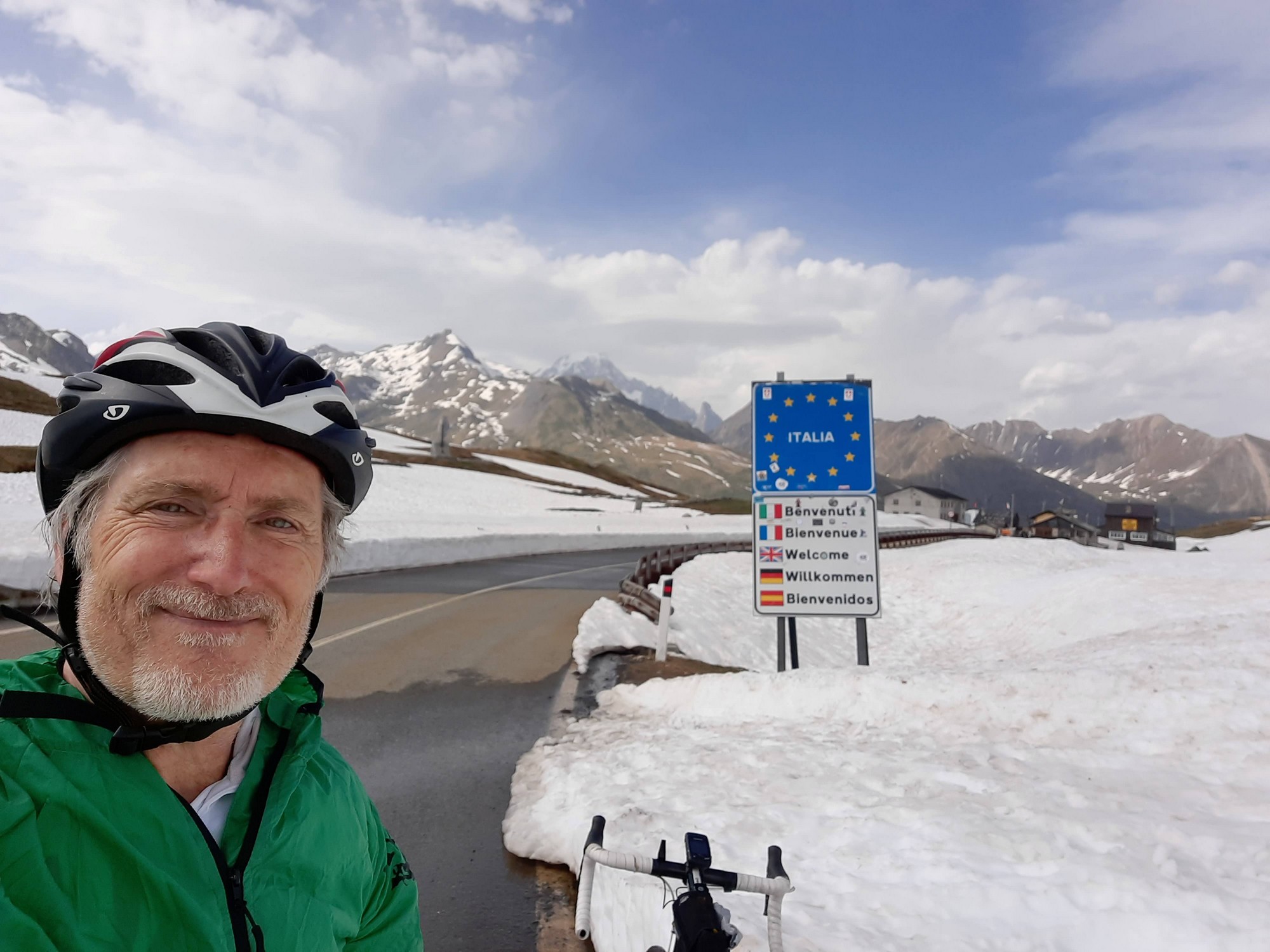 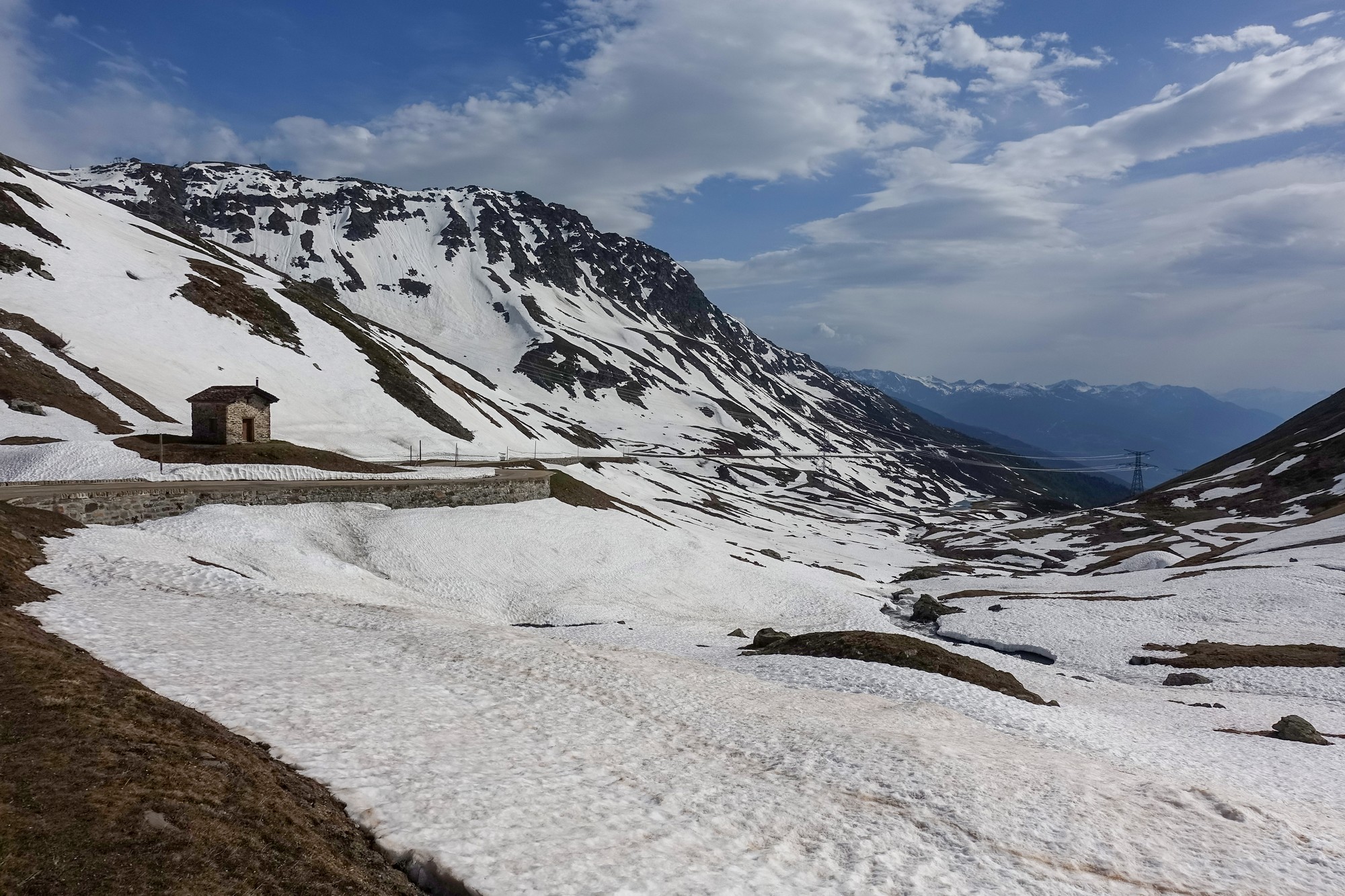 The first part of the descent was spoiled to some extent by the extremely strong wind.

I saw my first marmot by the side of the road, but by the time I’d got my camera out he had moved down the verge. But he stayed by a rock while I got his photo, and then disappeared behind the rock once I’d taken it.

It was almost as if he had waited for me!

I couldn’t believe the temperature back at La Rosière.

Still at 1880 metres, It was so warm I thought about taking my rain jacket off, but didn’t. In fact I was comfortable on the descent except a slight neck ache from looking up while on the drops. Inevitably there were some shots to be had on the way down. 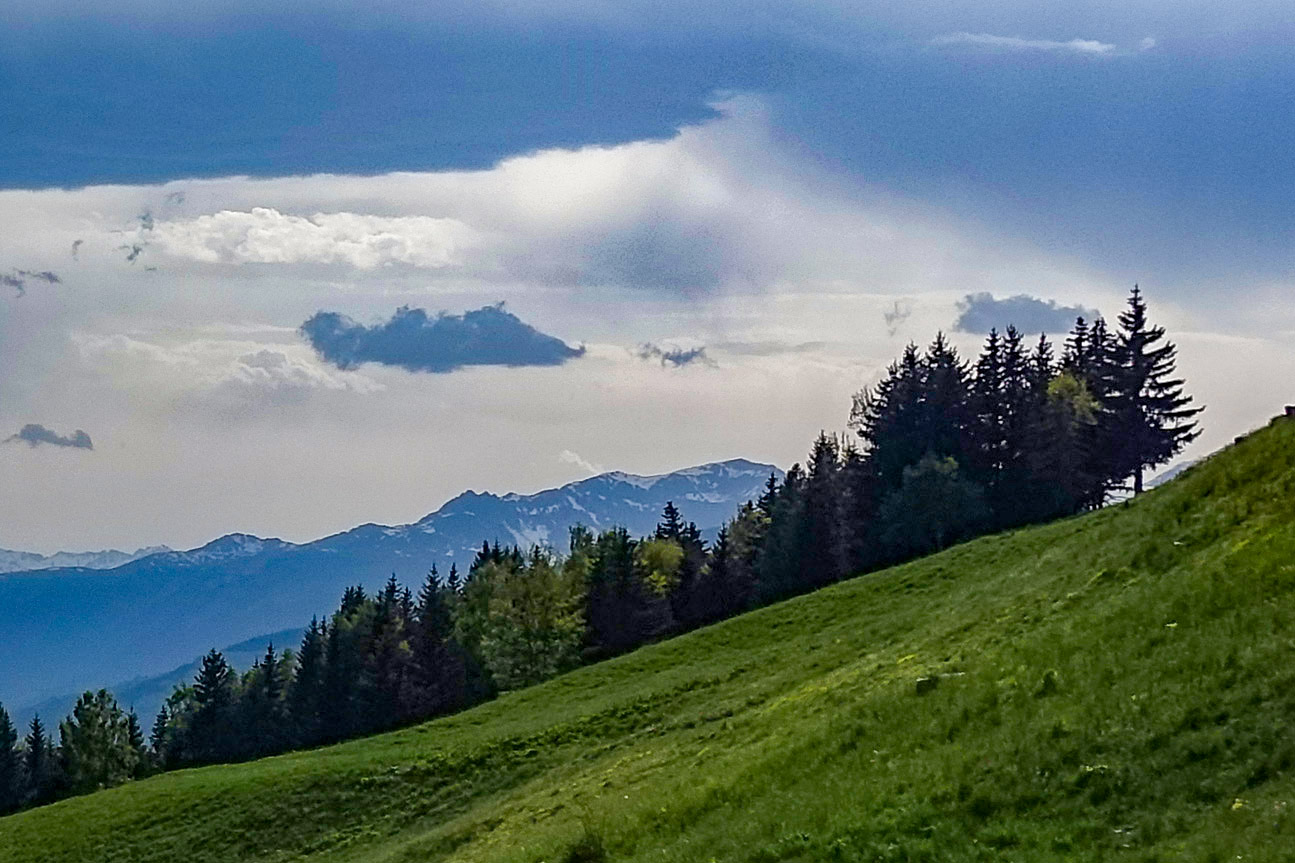 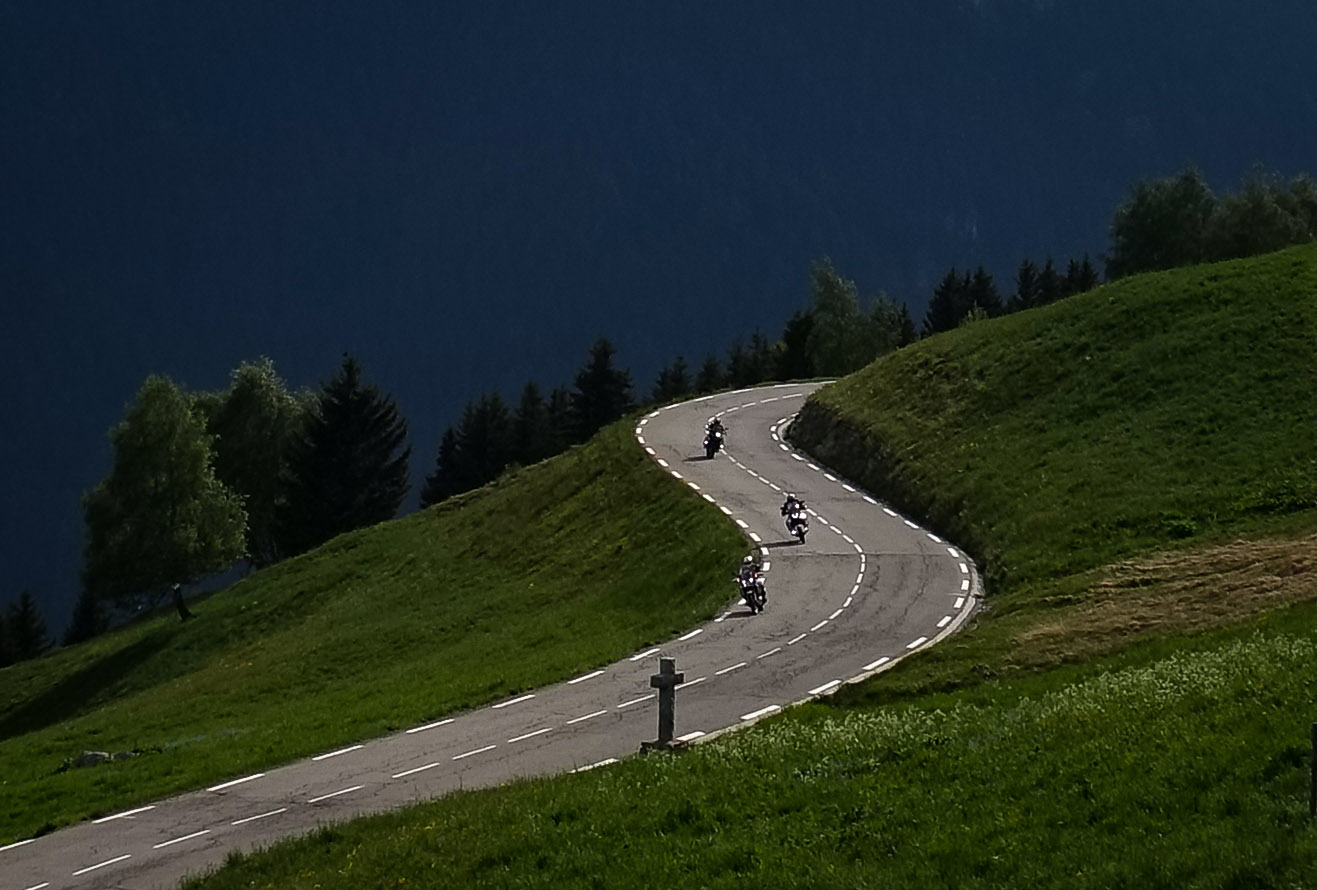 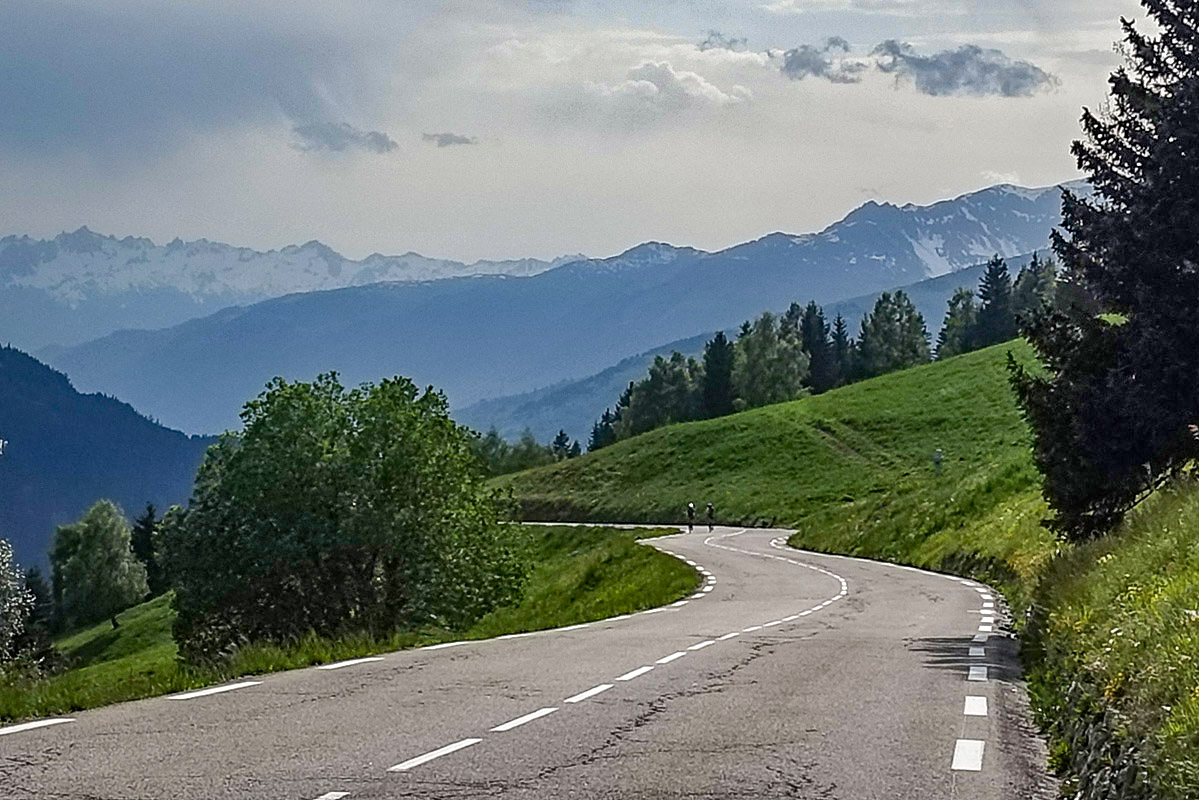 It was a nice fast descent, becoming stiflingly warm as I returned to Bourg-Saint-Maurice.

A tough ride initially, due to the heat, but it worked out OK in the end. Another one off my list!