This report coming eight miles into the ride. I’m in the heart of the Massif du Ventron. I’m sitting at a picnic bench in what must be one of the most peaceful places in the world.

All I can hear is, you’ve guessed it, birdsong echoing in the forest.

The climbing started as soon as I left Cornimont. It’s the Route Forestière du Rouge Rupt. At first I was in shade nearly the whole time. While the sun is hot and it’s a cloudless day, the air is fairly cool, about 20°C I would say.

In addition to the usual bird song was the almost constant sound of water trickling over rocks from the various streams and waterfalls that the road crossed.

I stopped at the 4-mile mark, as much as anything to relieve the monotony of the slog. I had an energy gel at that point. In contrast to yesterday’s ride full of traffic, today’s route is almost totally devoid of other vehicles. In fact I don’t think a single car passed me. A mile or so before the end of the climb the gradient pegged back quite a bit and I passed another col, the interestingly named Col du Bockloch. 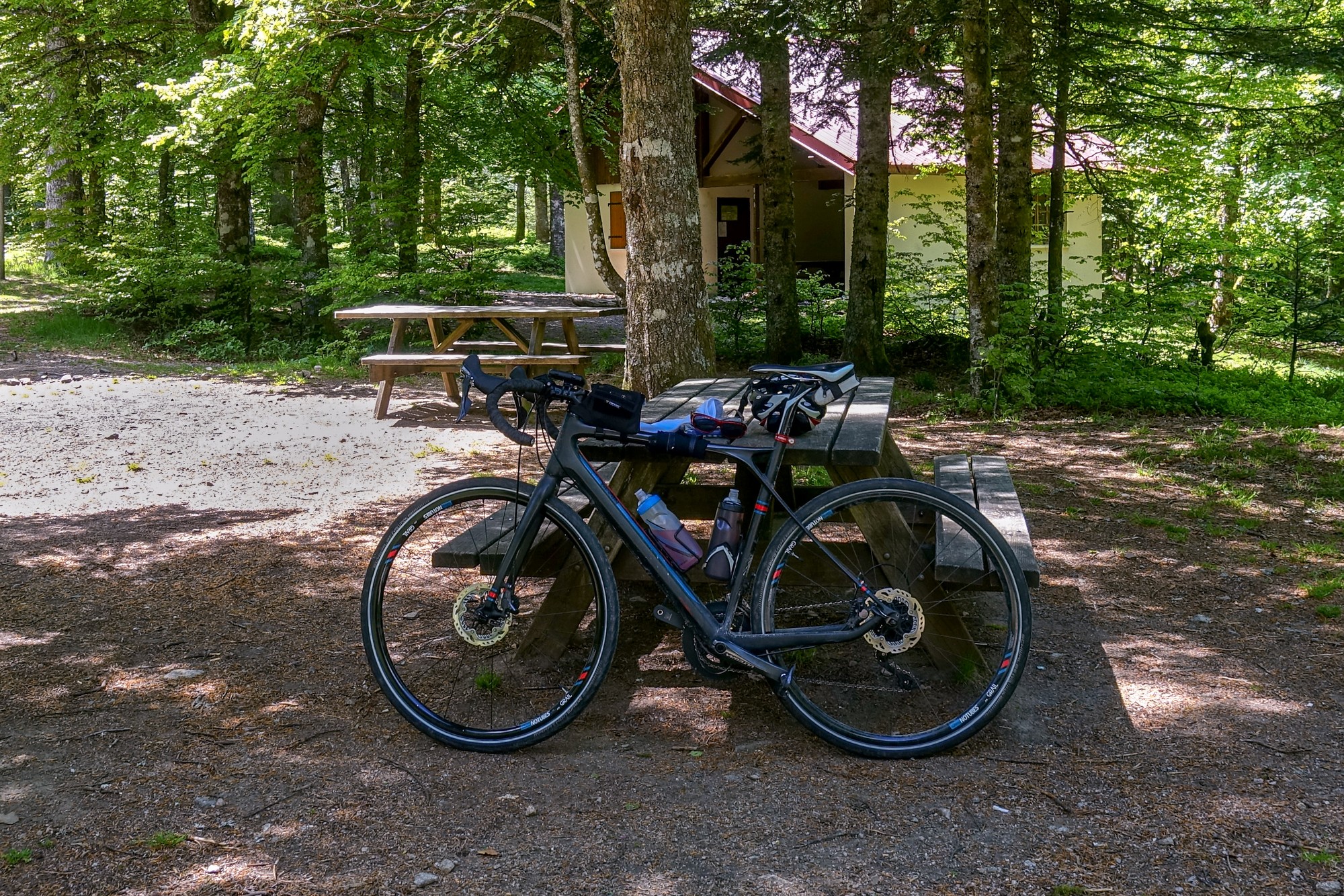 There have been a few cyclists pass by as I’m sitting here. I’m in the shade and the air is cool on my arms so I’ll put my arm warmers on for the descent.

The road surface is bumpy, as is not unexpected on a forest route, and I’d say that adds the equivalent of an extra percent of gradient in terms of lost momentum. I think I read somewhere that after they resurfaced the Bédoin-Mont Ventoux road, ascent times dropped because of the smoother tarmac.

The first part of the five-and-a-half mile descent from the Col de la Vierge to Wildenstein was quite cold because the sun had gone in and I was in the forest. Then the route joined the main road at the Col de Bramont. 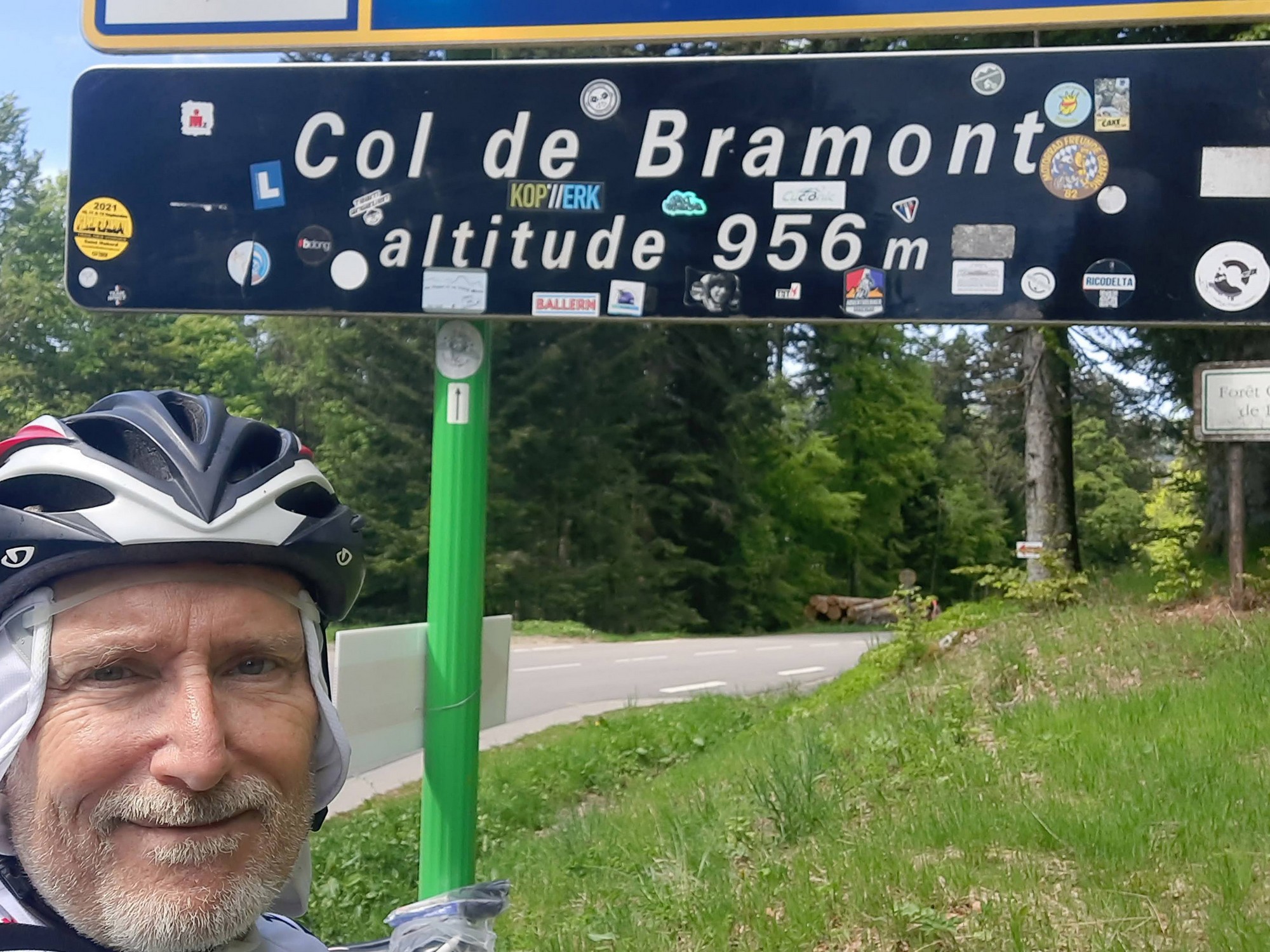 There followed a very fast descent down a wide main road with sweeping curves and lots of switchbacks. 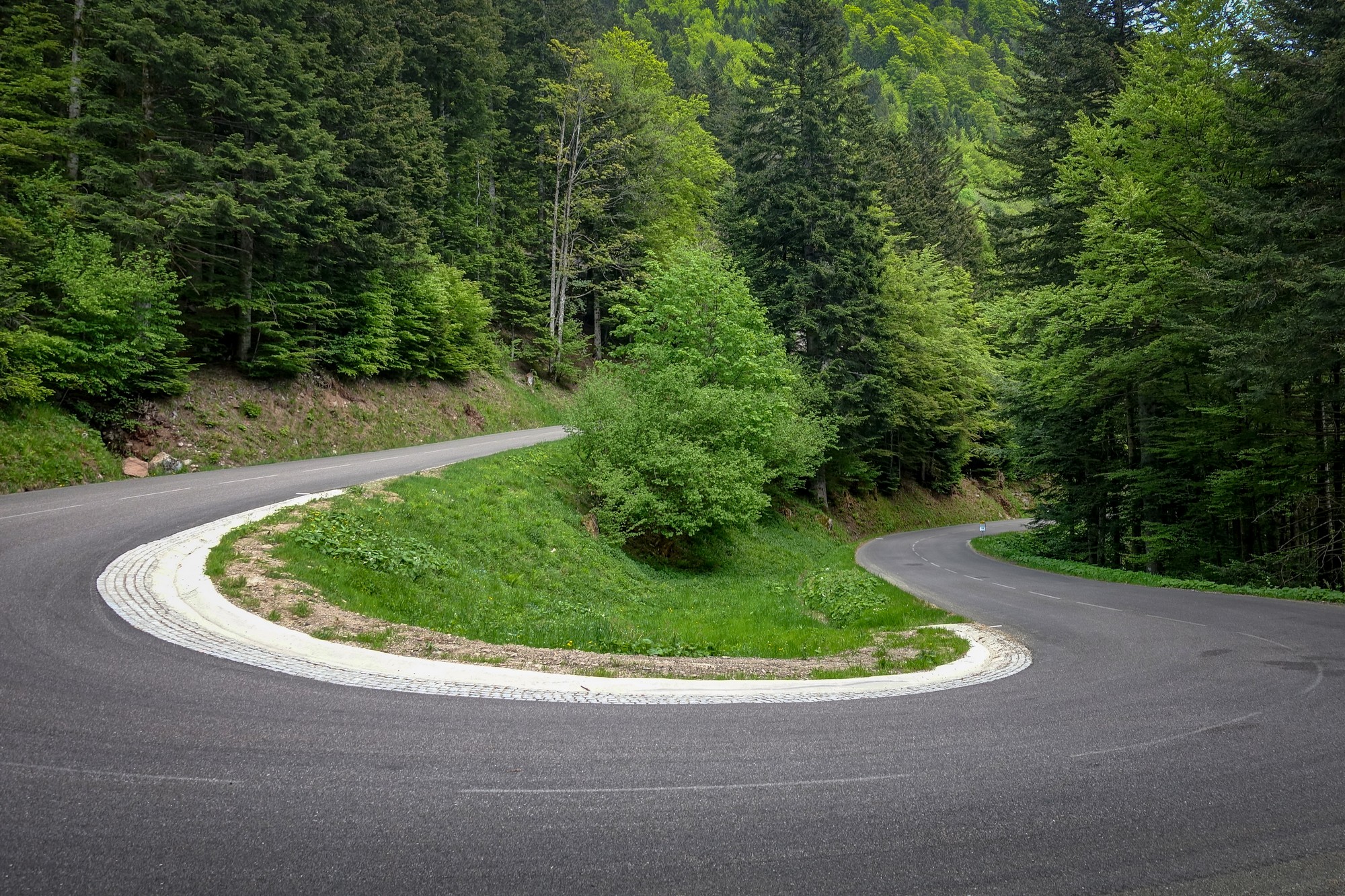 The sun started to come out and it was warmer then as I descended.

Towards the end of the descent I felt lots of small things hitting my face but couldn’t see anything. When I reached the bottom I noticed my legs were covered in small flies, so I took my helmet and neck warmer off and raked my fingers through my hair to try to rid myself of the little blighters.

There were quite a few cyclists on that road and hundreds of motorcyclists, none of whom were of the noisy bastard variety. So it seems that it is possible to enjoy riding a powerful motorbike quickly along a twisty road without making a godawful racket.

Writing this I nearly jumped out of my skin when the church bell suddenly chimed behind me.

I left Wildenstein at about 3:50

Less than a mile down the road from Wildenstein came Lac de Kruth-Wildenstein.

I turned off the main road and took the quieter road around the back of the lake. 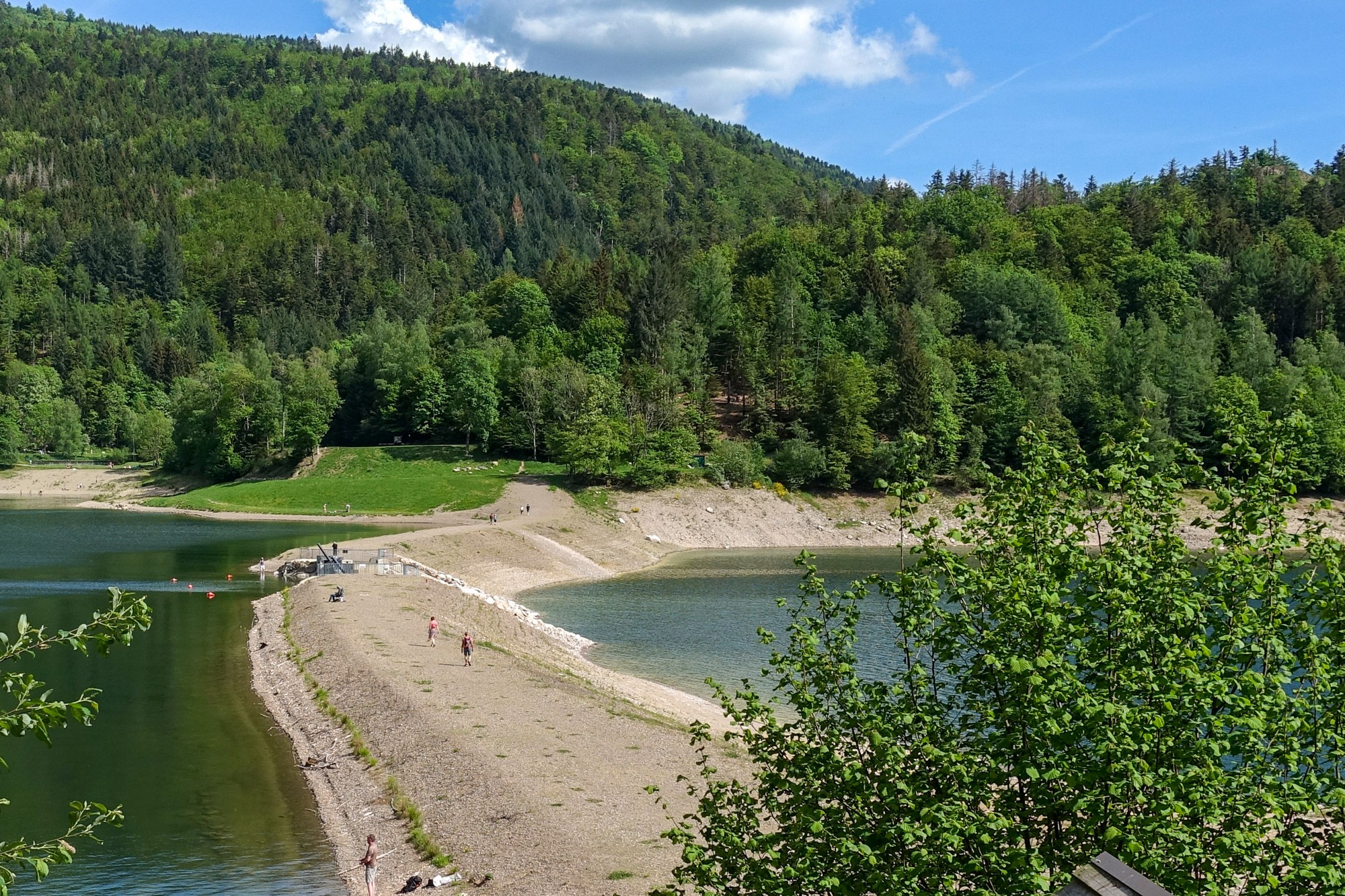 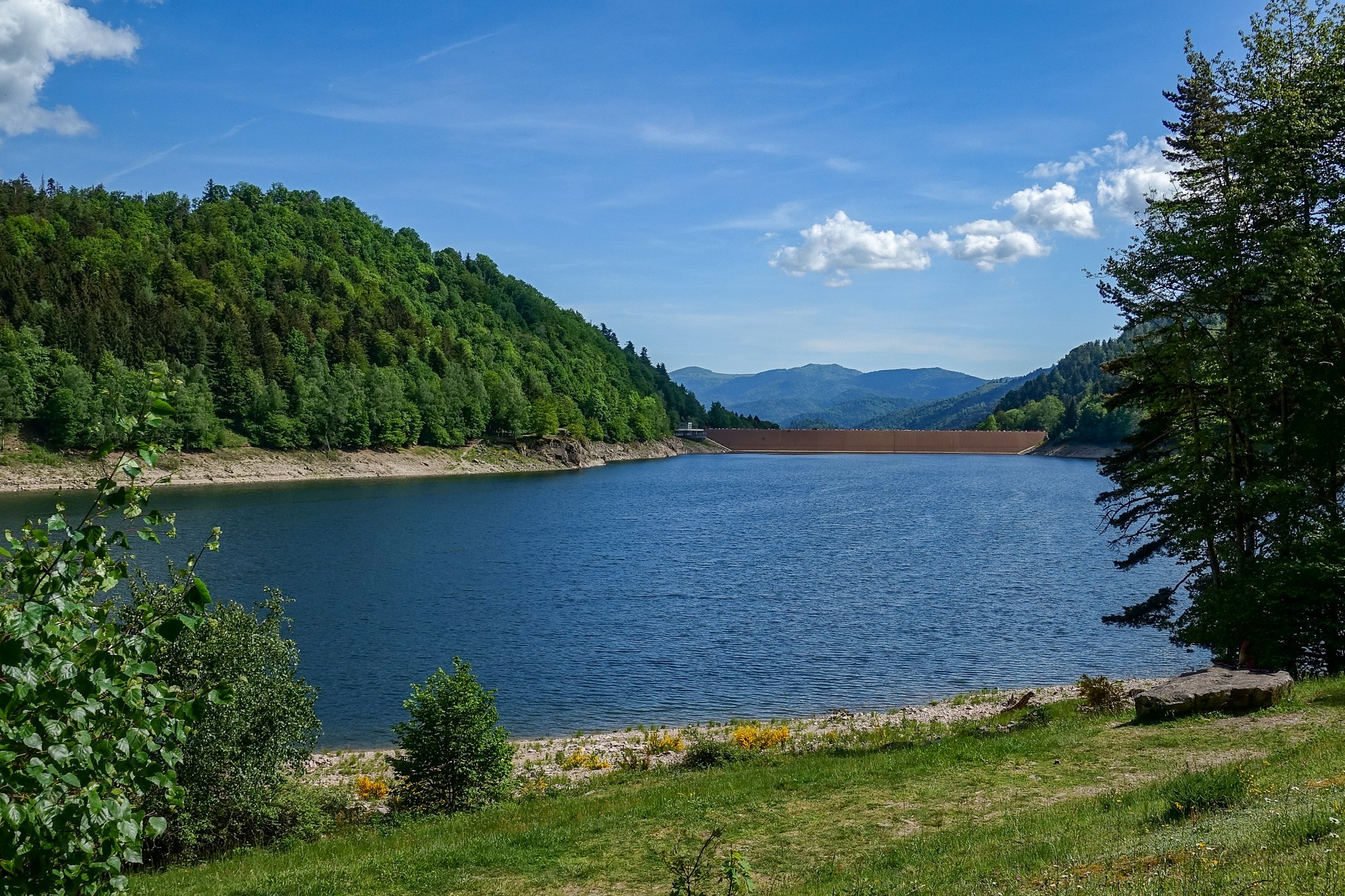 Situated almost midway between the communes of Kruth and Wildenstein, you can imagine that they had an argument over what to call the lake and settled on the double-barrelled name. 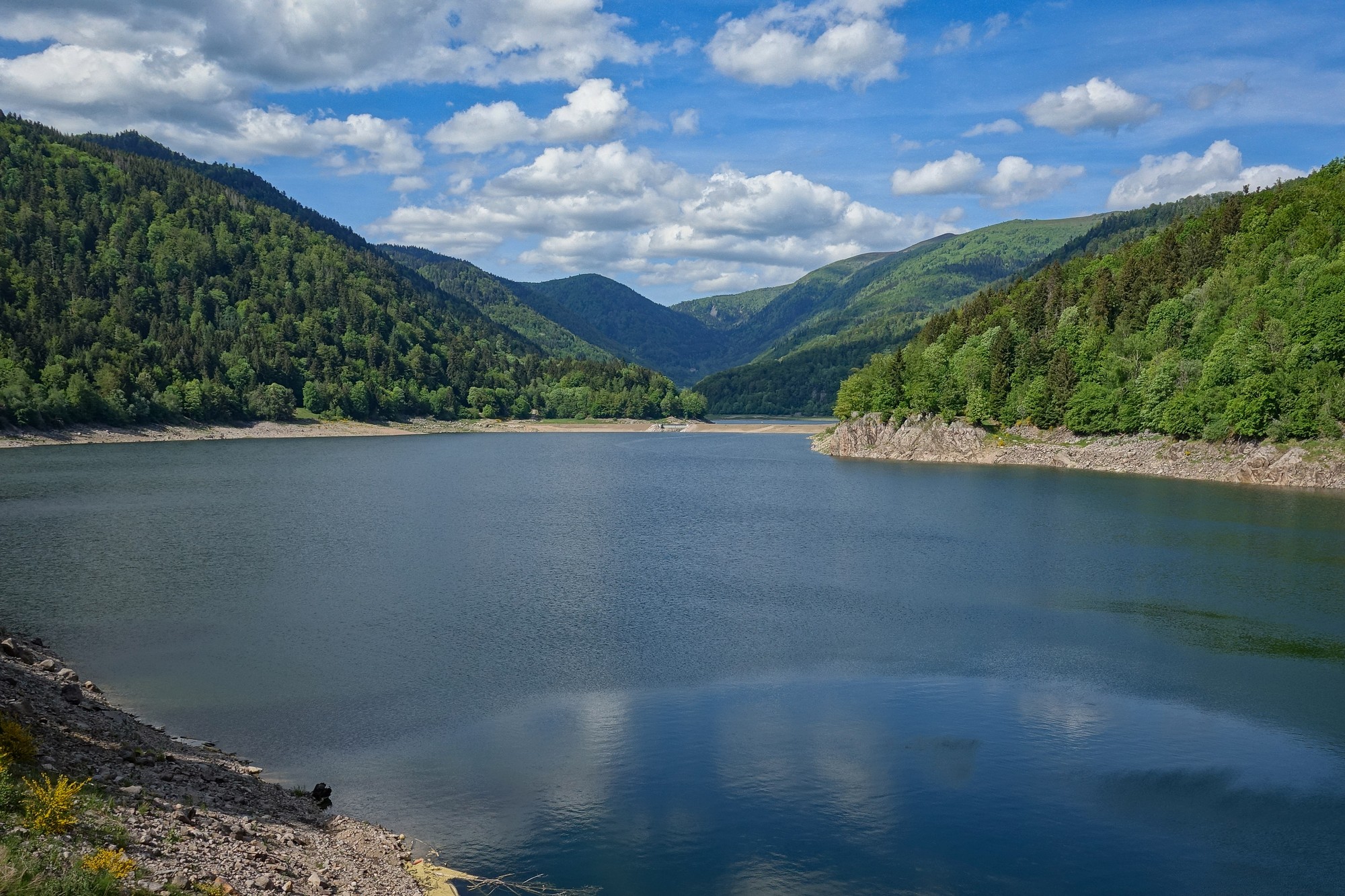 This lake is not commercialised, in contrast to Lac de Gérardmer which I recently visited. And it looks all the better for it.

Just over a mile down the road from the lake, I rode into Kruth

The second climb of the day started as I left Kruth.

I stopped at signs to a waterfall but couldn’t see how to get to it. But there was a lovely chapel there.

There were loads of bikers on that section of road, and lots of cyclists. Eventually I reached Col d’Oderen (from the other side to which I had approached it last time).

I stopped to pull my arm warmers back up my arms, then enjoyed the wonderful descent. Nothing passed me all the way to Ventron.

I was enjoying the descent so much that I forgot that I’d planned a new route into Cornimont, so when my Garmin alerted me that I was off course, I turned back and took the quieter road that follows the main road into Cornimont, but further up the hillside. It was nice and quiet but less exciting than the fast descent on the other road.

I got back around 6.