Speaking with a German guy a couple of days ago, he recommended loads of places to me, one of which was Lac de Gérardmer, so I planned a ride there, via col de Grosse Pierre. It was a hot day

Well I must be a mad dog and/or an Englishman because I left at just after midday into a blazing sunny day.

No base layer, no rain jacket, two bidons, lip balm, sun lotion and my neck protector thingy. And 2 paracetamol before I left, to make sure. The heat and the climbing will conspire to challenge me today.

Out of Cornimont, I stayed on a road that was just up the hillside, following the river and the main road below. It was quite undulating – more so than the main road would have been, but there was no traffic. Even though it was undulating it was gradually climbing.

At one point I looked up at the sky to my left and thought it was coming over extremely dark and then I realised it was my polarised lenses causing the northern sky to go deep blue, an effect of polarised lenses that I really like.

I reached La Bresse much sooner than I’d been expecting. There was a short section on the main road into town and then I turned left up into the hills, the opposite side to that from which I descended two and a half years ago on this ride.

The road has been climbing ever more steeply away from La Bresse as it shrinks below. 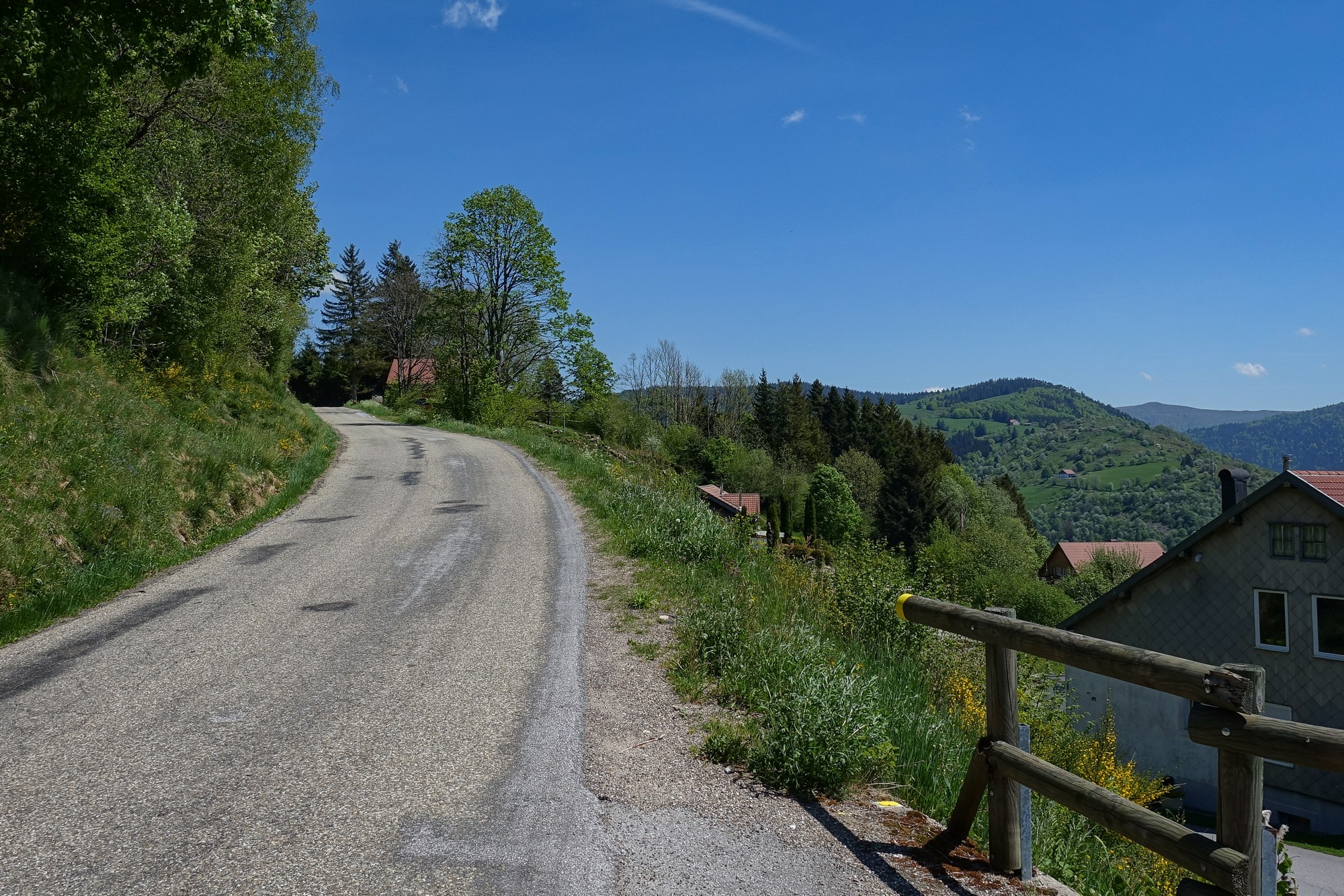 The sun is blazing down from an almost completely blue sky and I’ve been looking for some shade but didn’t find anything until I saw this bus shelter. 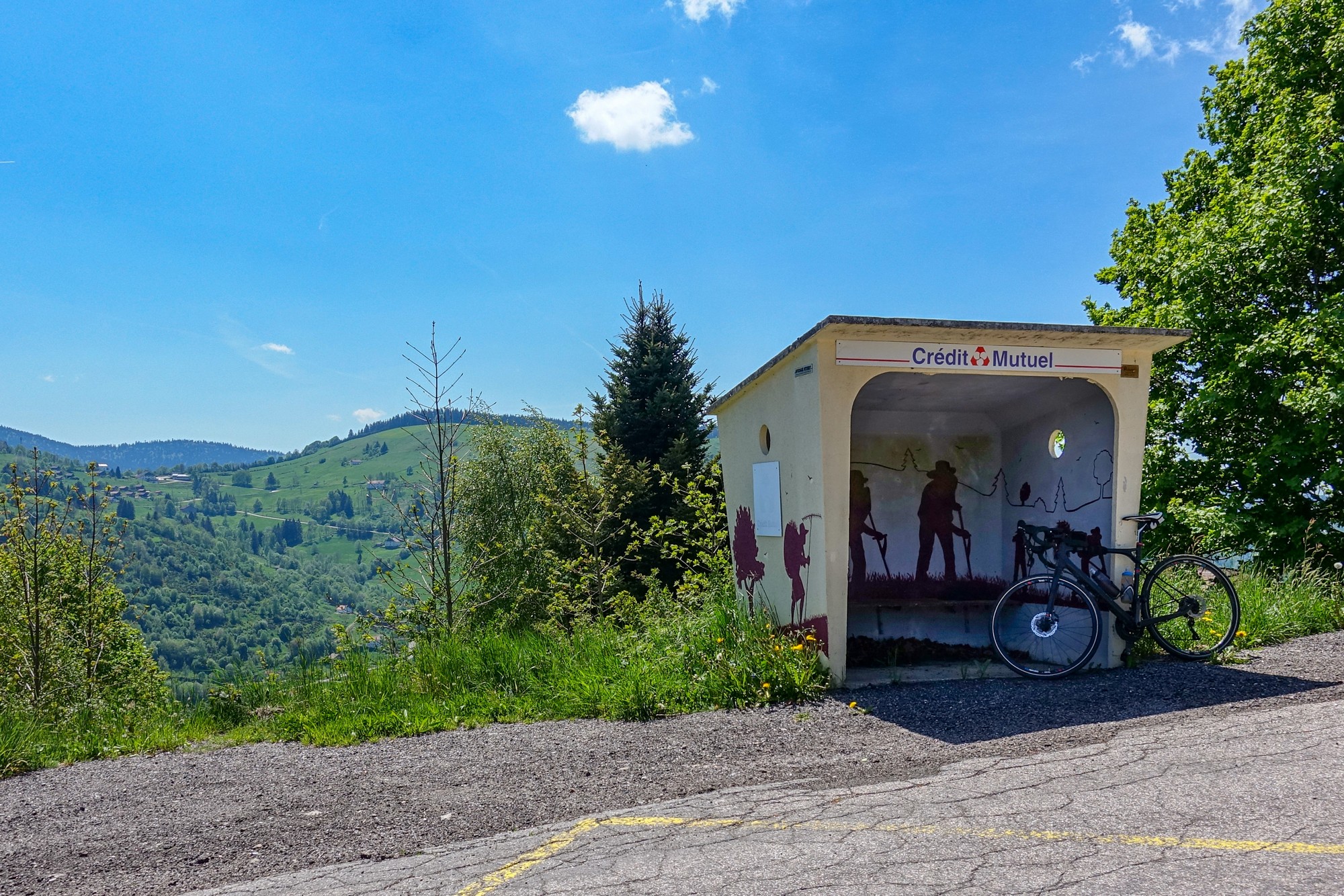 There seems to be a fairly moderate southwesterly wind, which has sometimes been helping me and sometimes not, but I’m more worried that it will be against me on the final climb of the day.

Before leaving for the ride I took a photo of the gradient map on my phone so that I can refer to it anytime, hopefully avoiding the frustration of not knowing when the next hill is coming up or ending.

Sitting in this bus shelter, the wind is cooling me down nicely. I’m going to have an energy gel now and do the last 2 miles of this first climb of the day.

The rest of that climb to col de Grosse Pierre from the bus shelter was actually relatively easy.

Invariably, shortly after taking an energy gel, the climb soon ends or becomes significantly easier, rendering the gel superfluous. It’s similar to when you’re waiting for a bus, and as soon as you light a cigarette, the bus comes. It’s using Sod’s Law to your advantage! 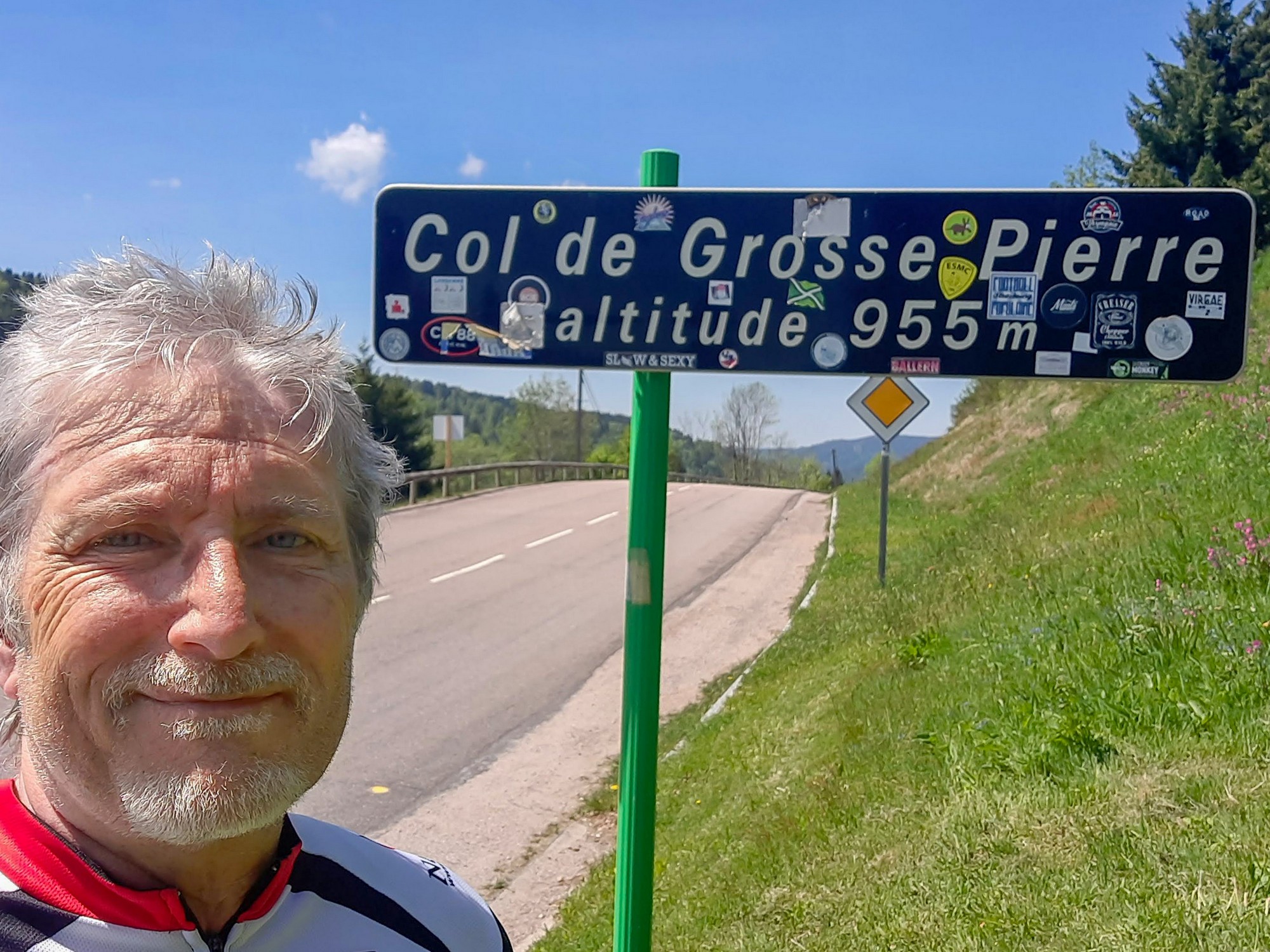 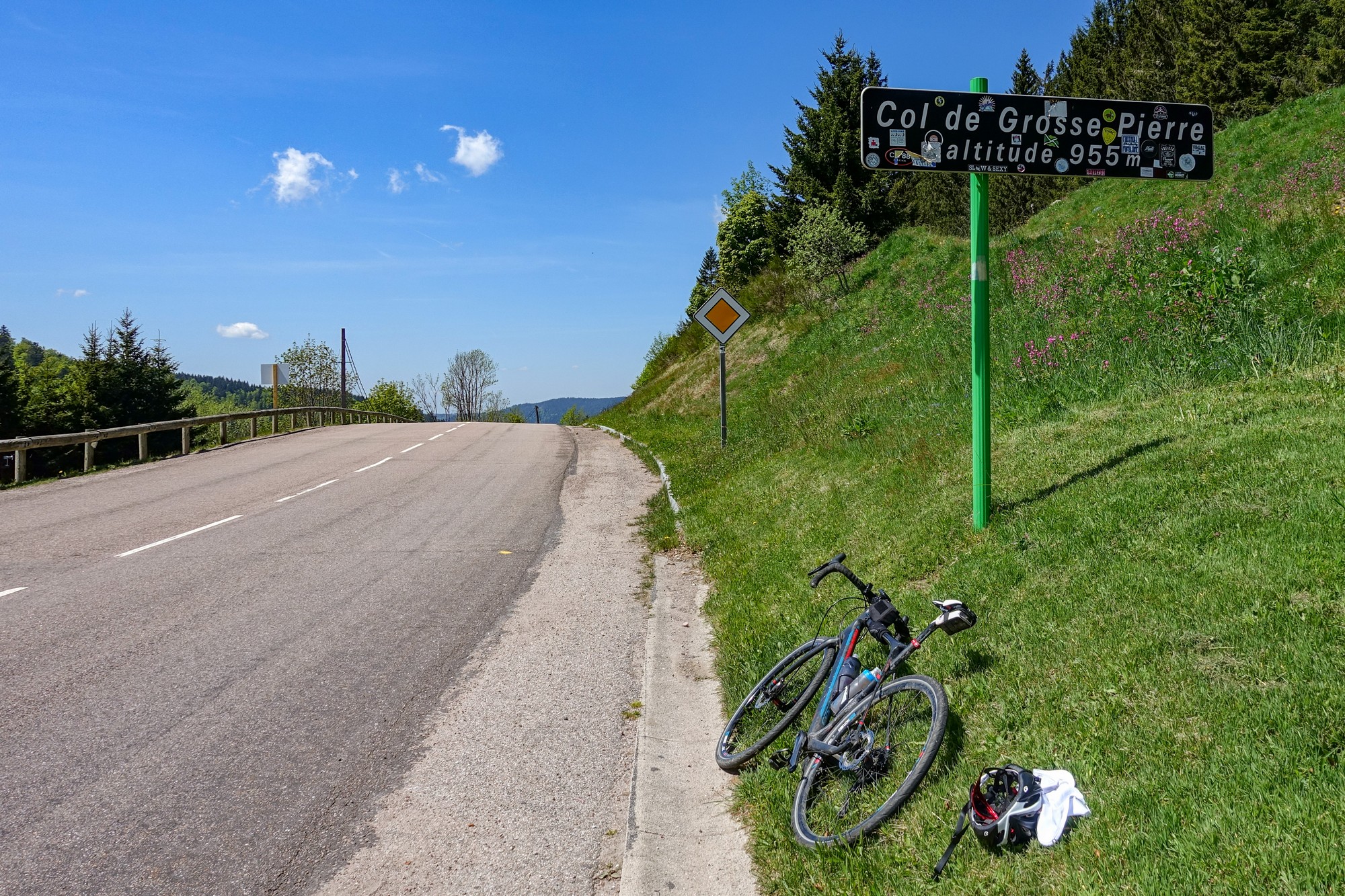 The road descended from col de Grosse Pierre on a twisty main road with good surface, except for a few dodgy patches.

There was a short climb and then the descent to the lake.

I’m at the lake now and have just eaten my sandwich. 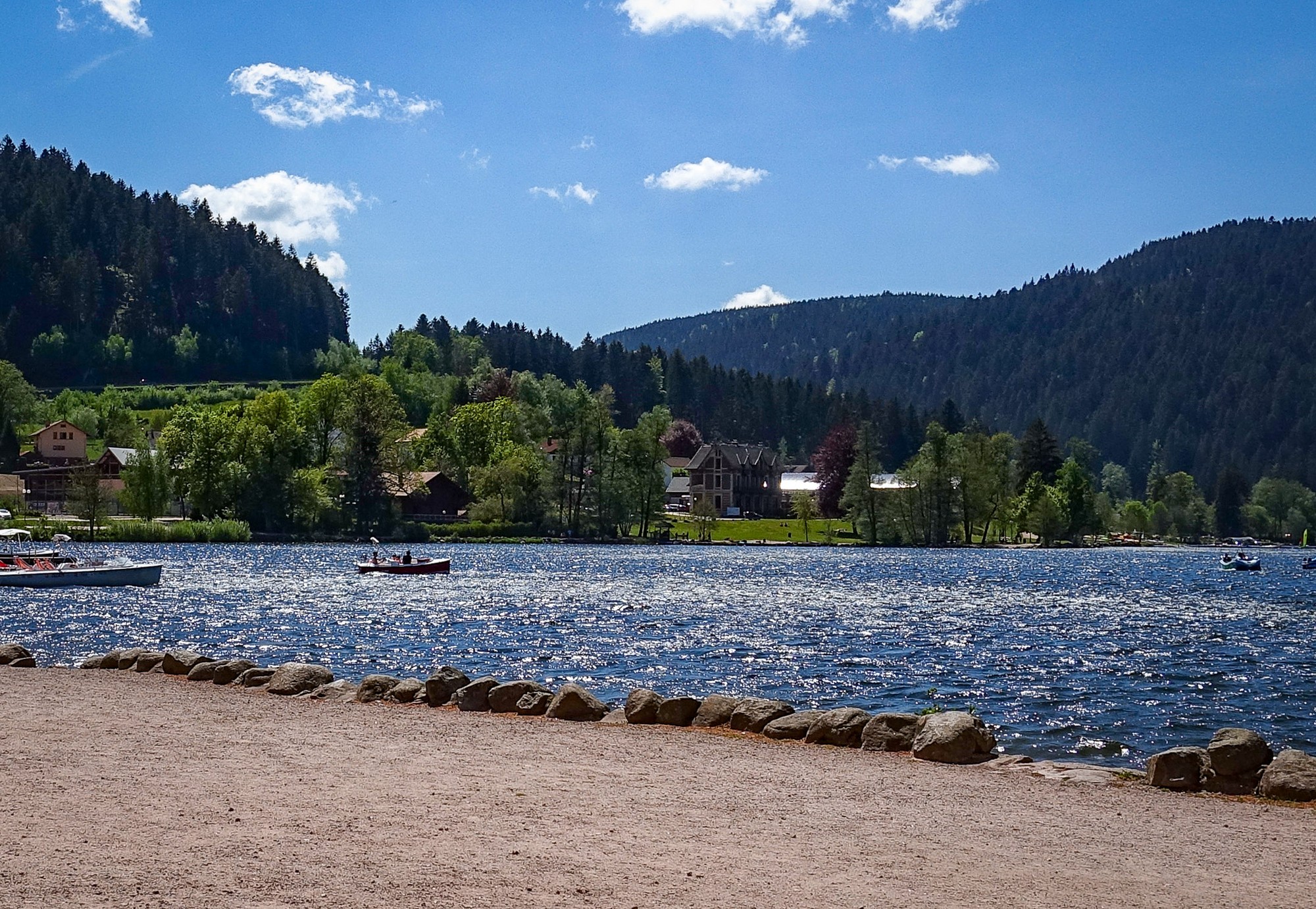 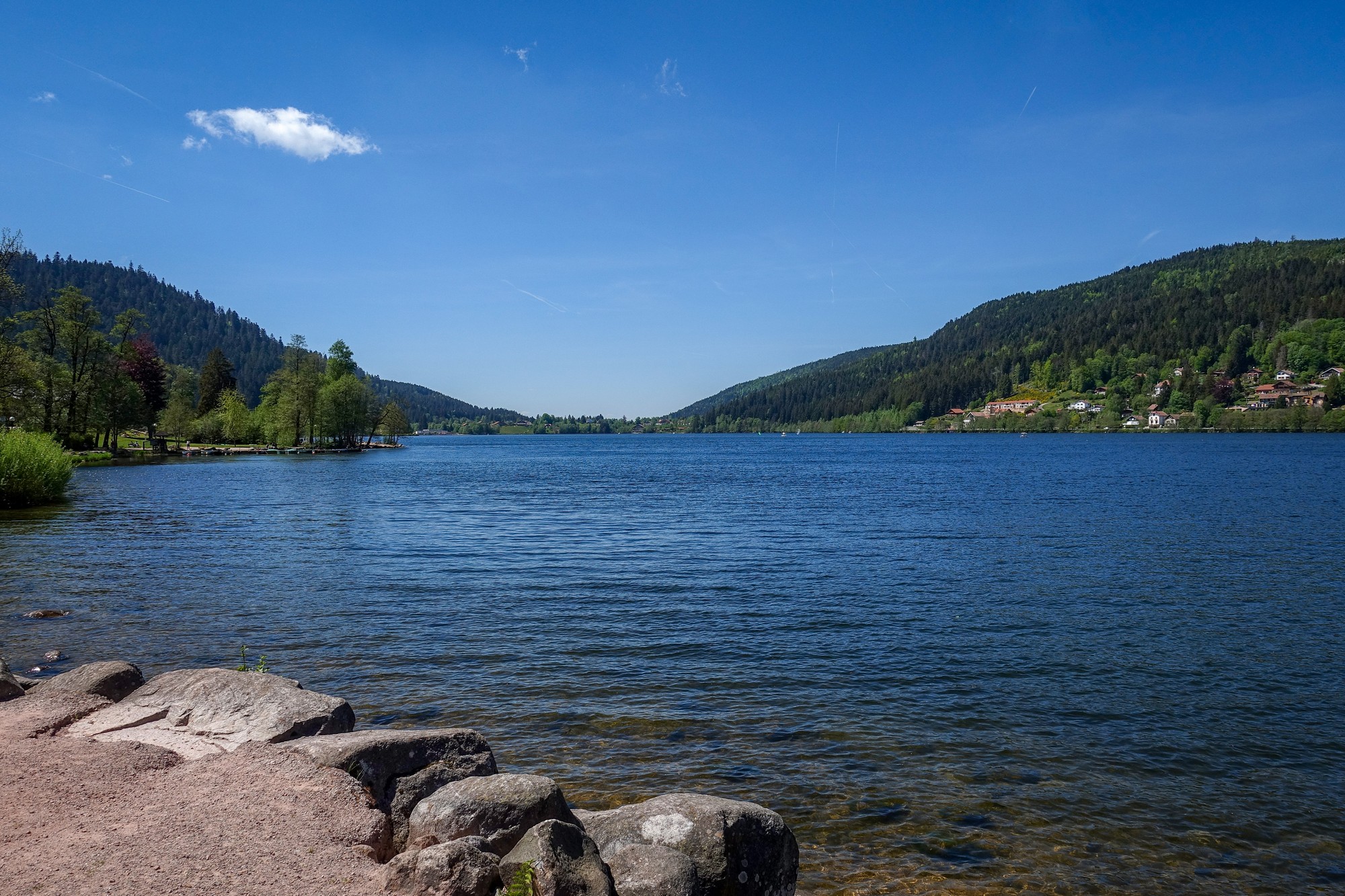 It’s extremely windy sitting here. I hope there’s not a massive headwind on that last climb. It’s quite commercialised here so it’s not that attractive to me.

I have just descended from col de Sapois. I’m standing in the small amount of shade offered by a garage doorway or whatever it is. After riding round the lake, which was quite windy, there was a very steep climb to col de Sapois.

There followed a 5-mile descent on excellent roads.

Sometimes the wind was too gusty from the side, so I limited my top speed for safety reasons. Even though it was an easy downhill, I now have a headache and neckache coming on, so I’ve just taken a couple of ibuprofen and an energy gel ready for the next climb which is a long one. I certainly didn’t need my arm warmers for that last descent so it looks like I brought them for nothing.

It’s been one long continuous slog for the last 6 miles. I started losing energy on some of the steeper sections and had to stop now and again whenever I saw some shade, just to cool down for a few minutes.

Since that last report my headache has gone. I did have a pain at the side of my head so I stopped to investigate. I thought it was my glasses but it turned out to be the strap on my neck protector thing, which I adjusted and it’s been fine since. So there’s no real pain anywhere, just a general lack of energy. One of the roads was quite busy as in like a car every minute or so, but then I turned onto a really quiet road to Col des Hayes.

There was a descent from Col des Hayes before the turn off to col de Lauwry.

For most of the climb, luckily, and unexpectedly, I’ve had the wind behind me and it’s been blowing cool on my back up the last climb – very pleasant.

I’m just about to head down now. I’ve got an idea there might be one more little ramp to do, I’m not sure. I did have another energy gel somewhere back down the road but the normal magic of the climb suddenly ending didn’t work that time.

Well I was right – there was just one little but tough ramp to do on the remaining descent. That descent from Col du Lauwy to Cornimont has some really steep parts. 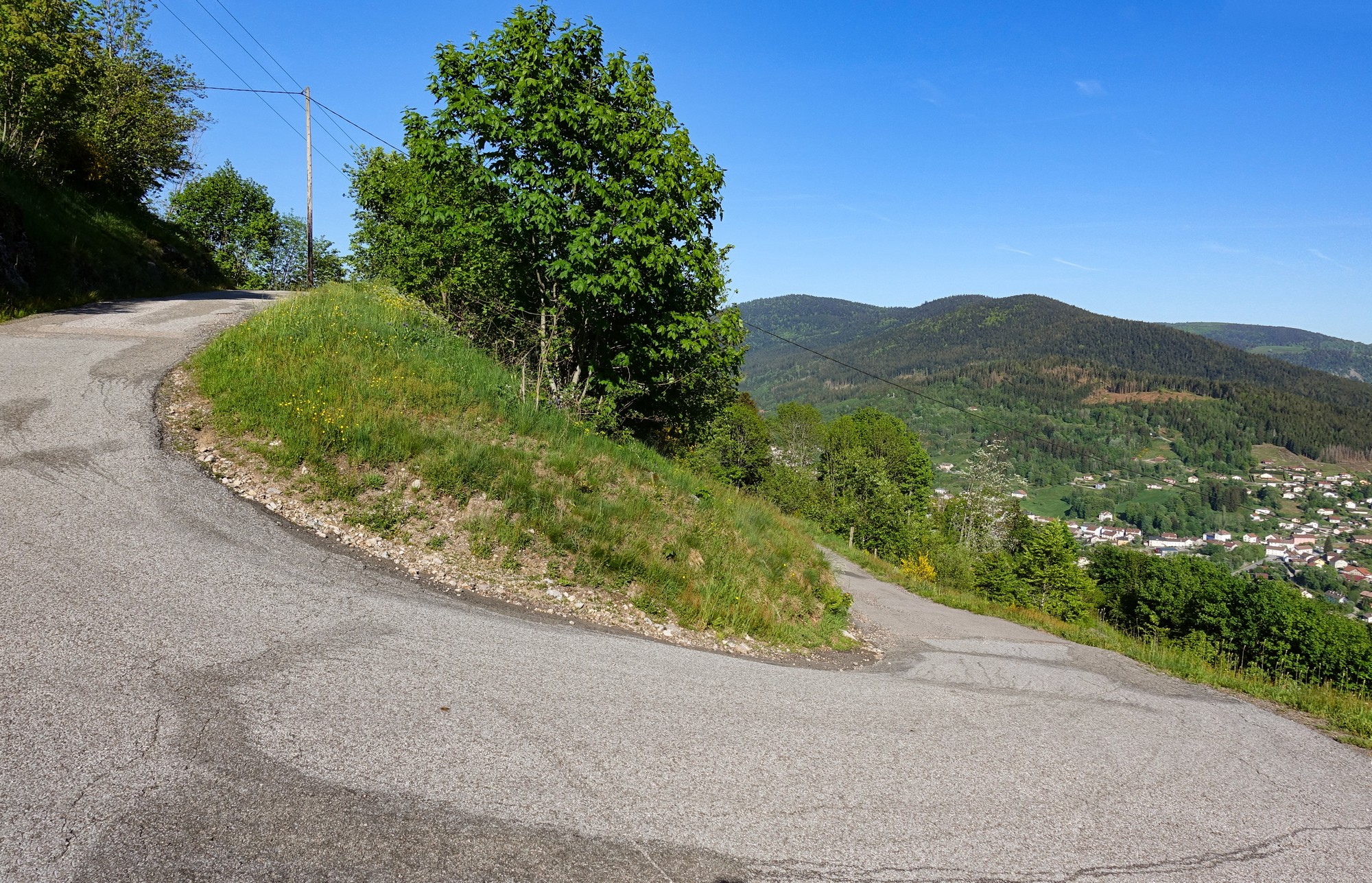 I was on the brakes the whole time – you just can’t let go. My hands were aching. And my neck was feeling it too, as I had to be on the drops even with the disc brakes. A couple of times I stopped to get photos and I could feel my shoes slipping on the road, it was so steep.