I nearly didn’t ride today due to the weather forecast. But the sunny spells prompted me to ignore that and take a chance. In the same way that I did with yesterday’s ride I had second thoughts about the elevation profile of this one and reversed the route to ease some of the gradients. Before leaving I changed the brake pads on the front brakes of my bike.

When I removed the old brake blocks I realised that the ‘metal-on-metal’ noise I had heard yesterday was not because the blocks had worn down to nothing, but because a shard of aluminium had become embedded in the rubber. 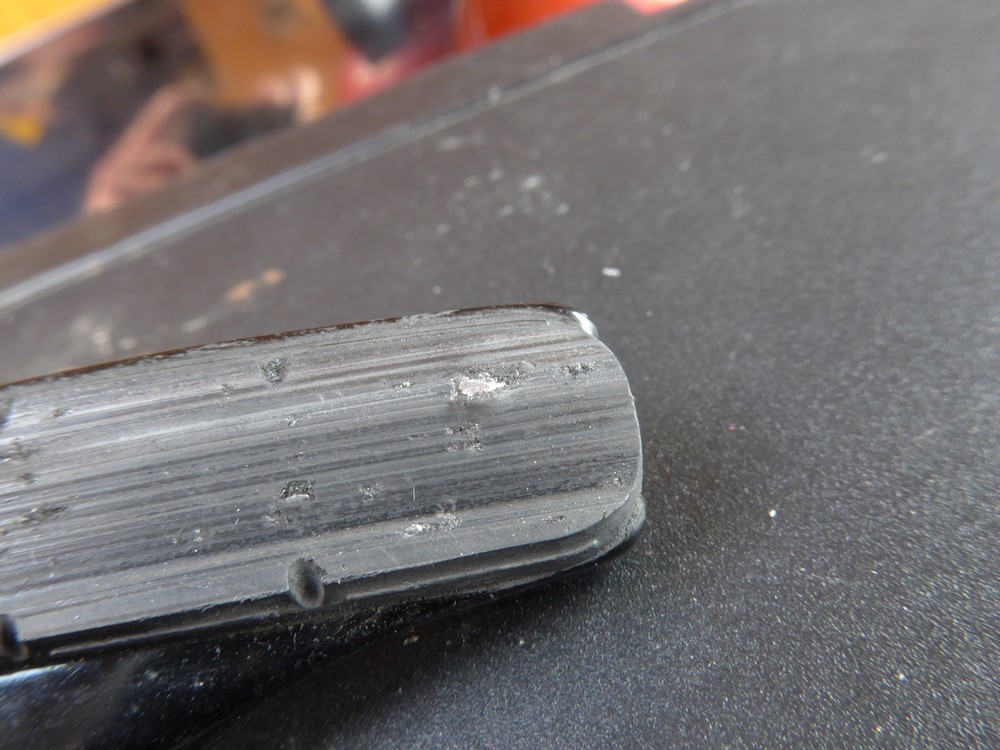 I’m always surprised when I see this happen and I don’t quite know what causes it. 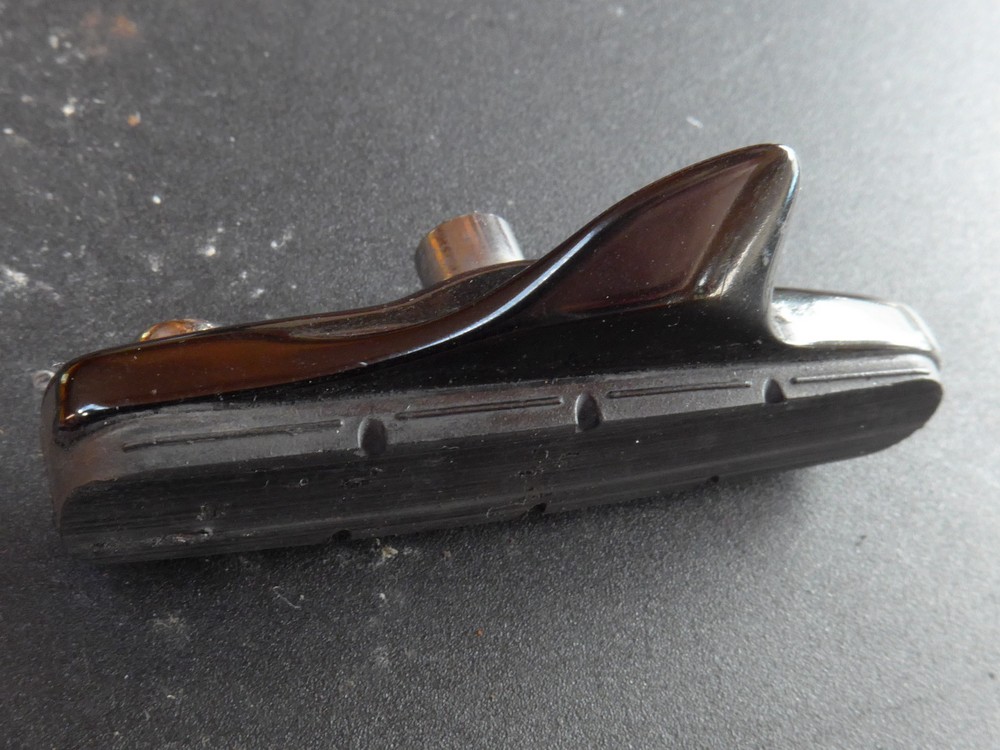 Anyway, they went straight in the bin and nice new ones went on 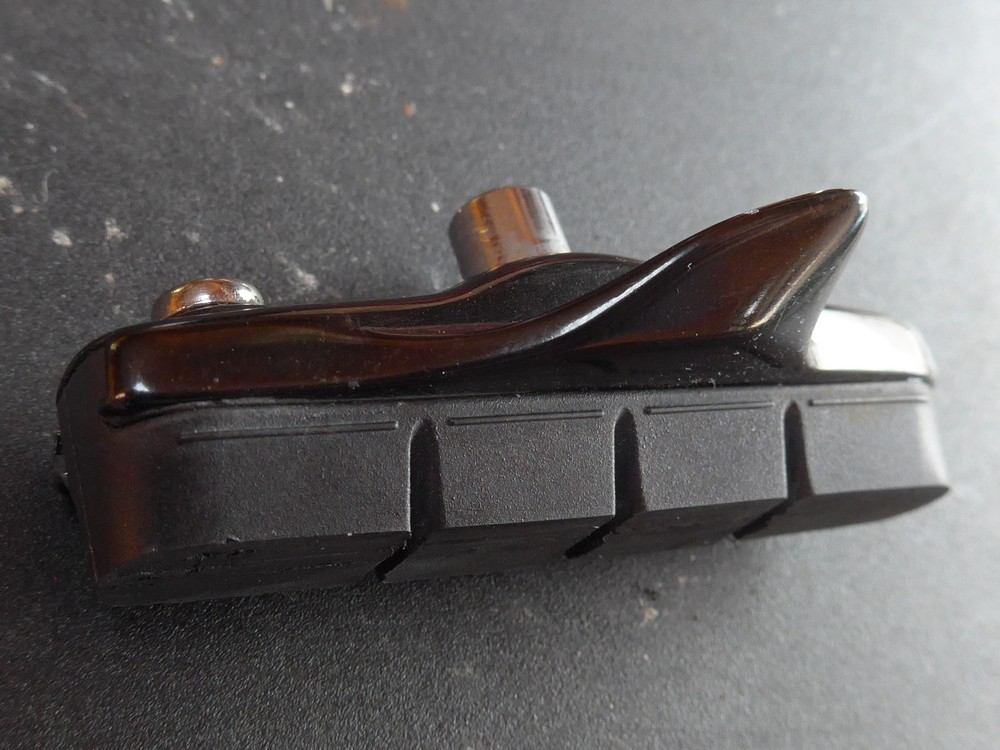 The temperature was warmer than yesterday. I still wore my base layer and arm warmers and in the end they were fine.

About 2 miles into the ride I saw this sign 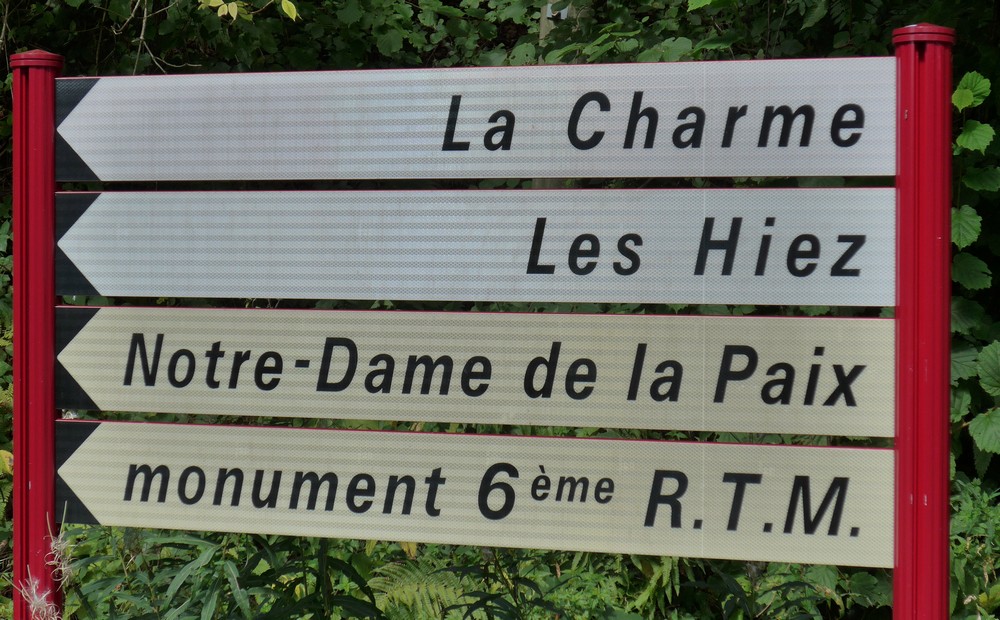 That looked like it leads to the magnificent statue that overlooks the whole of Cornimont from high on a hill. I didn’t have a clue what the road would be like but I just had to take a chance, so I turned off my planned course in search of the monument. There was some steep climbing to be done, which was expected because obviously the statue is on the top of the hill. I kept looking for glimpses of the structure through the trees. Eventually I saw another sign for it pointing up a gravel track. 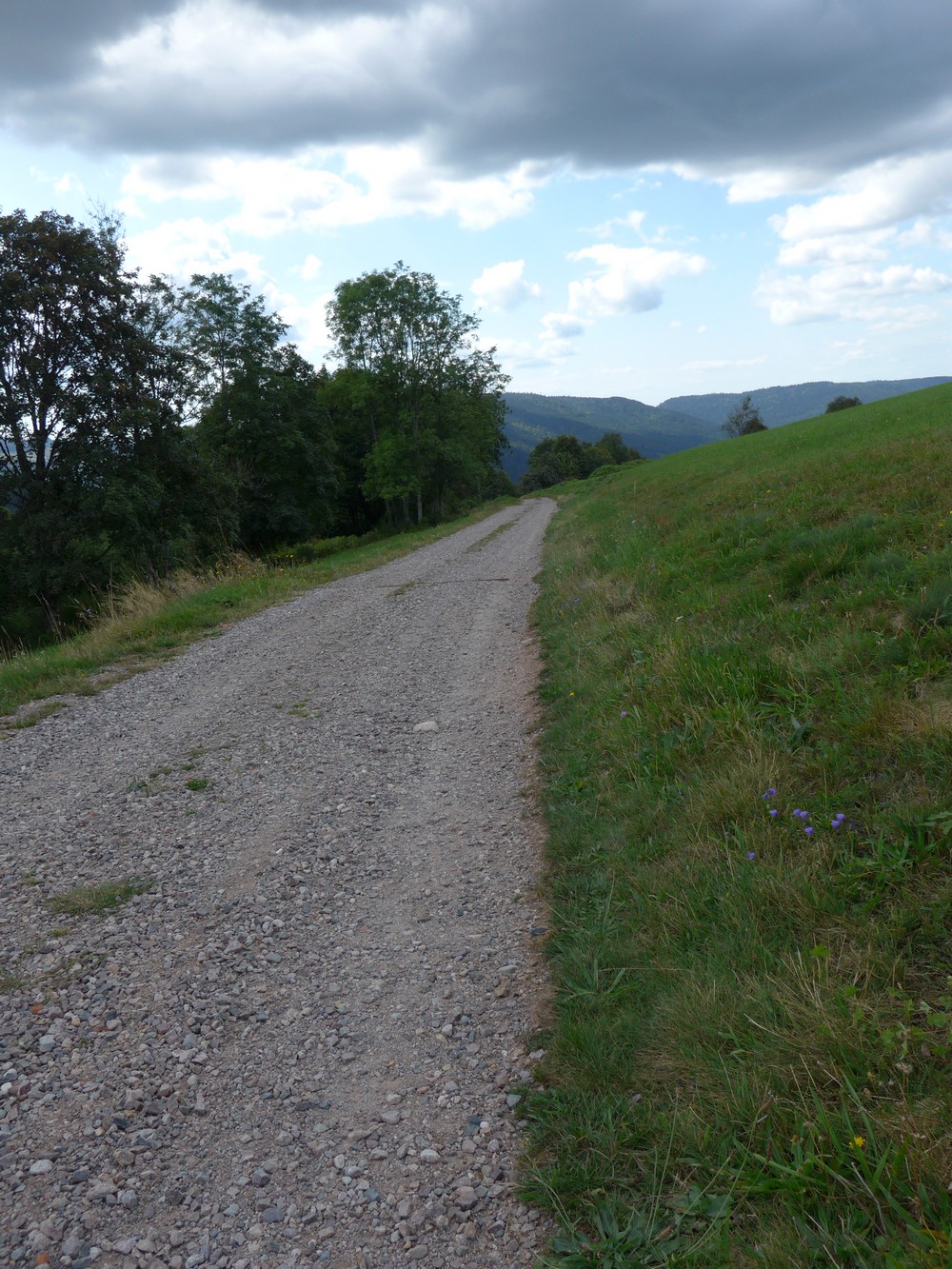 This was very difficult to ride on, and I didn’t have any idea how far it went, but I kept on going. Then the track started going downwards and it became so difficult to ride I started walking with my bike. Then I could see the statue through the trees. 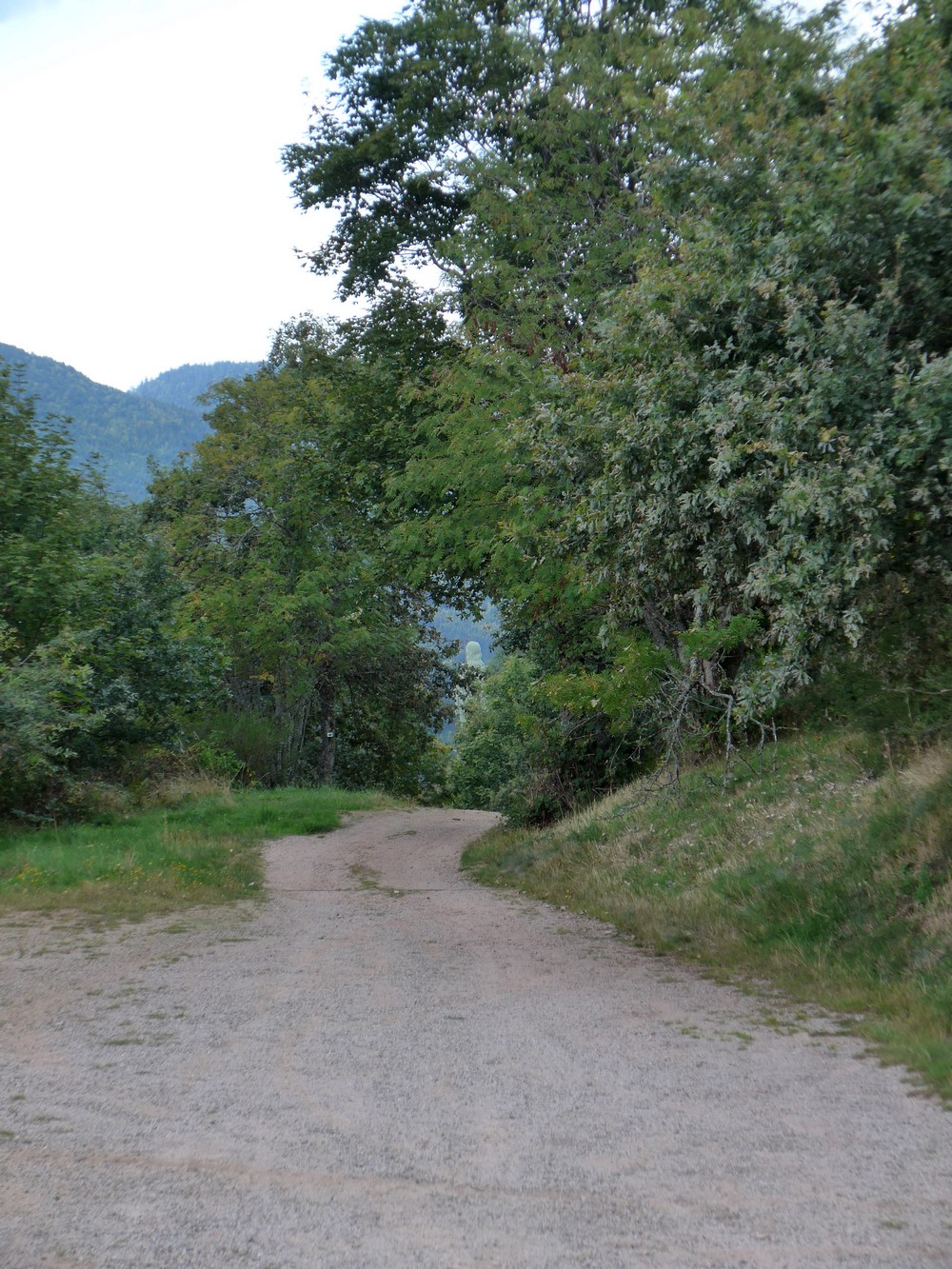 Eventually I came to a clearing which was behind the statue and I saw a track going down very steeply which presumably led to the statue itself. 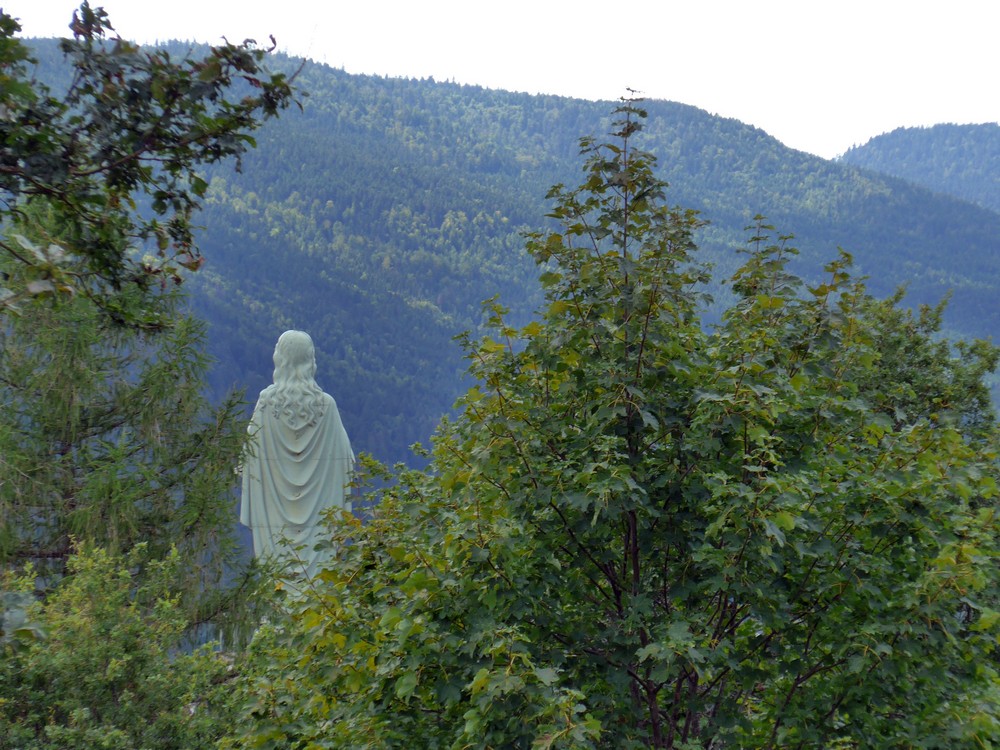 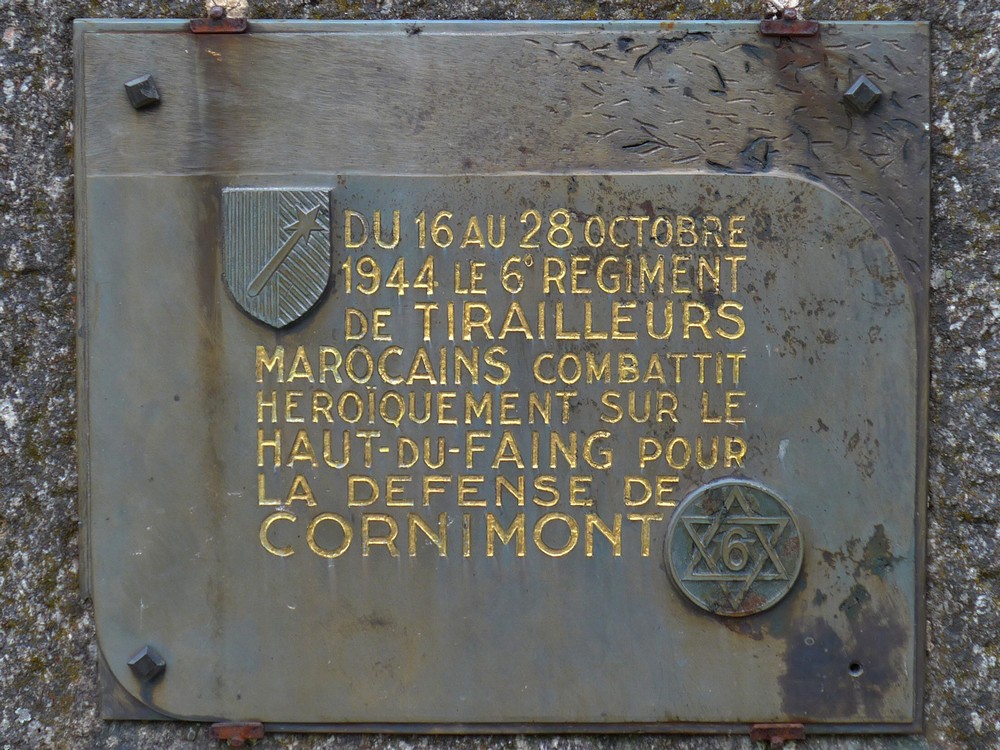 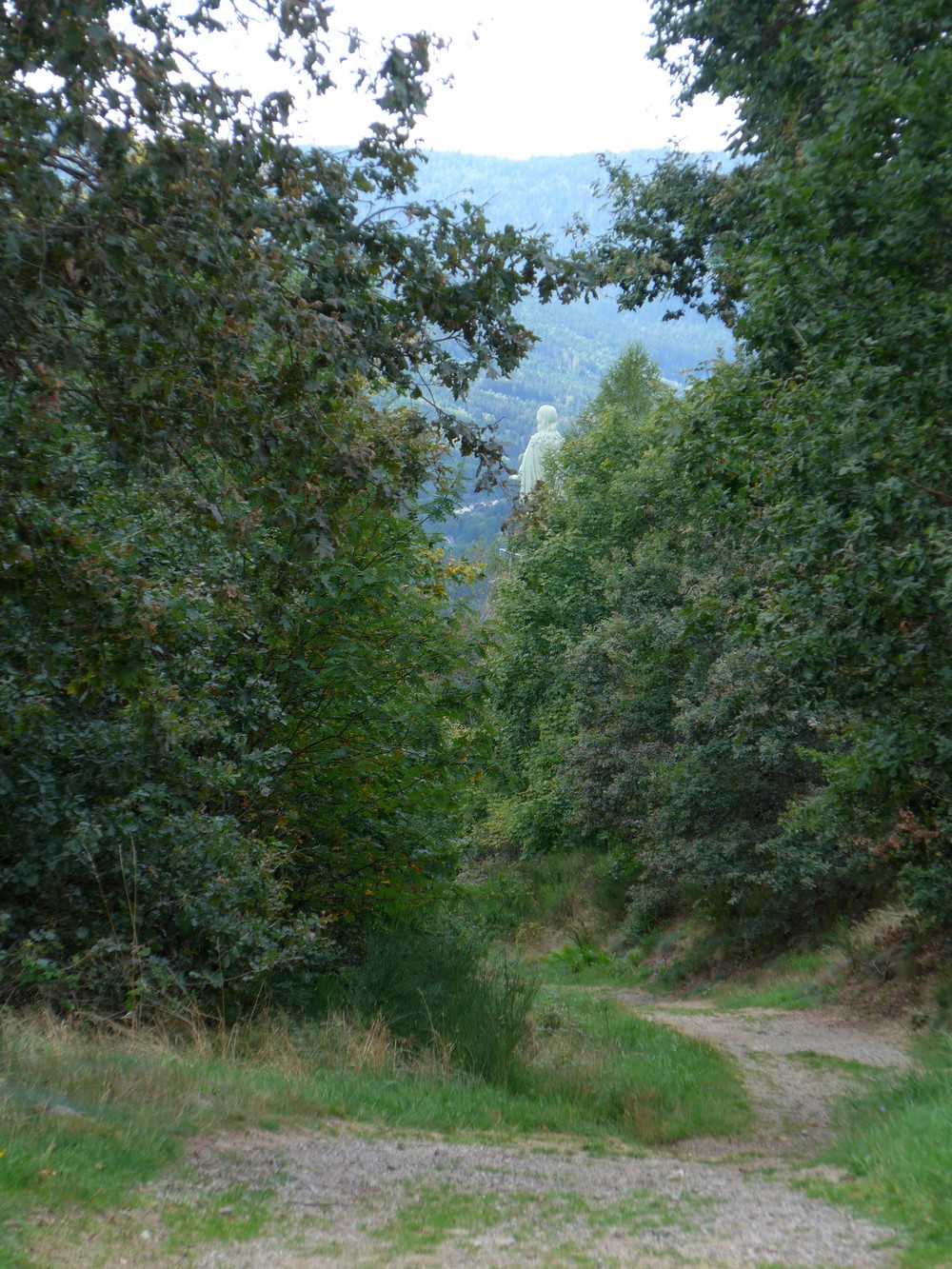 I walked my bike down there – it was way too steep to ride. My new cleats were taking a complete hammering on the rocky surface. There was no one around and I hadn’t seen a car for several miles so I decided to leave my bike on the side of the path and totter down the rest of the way. When I got there I was glad I had persevered. 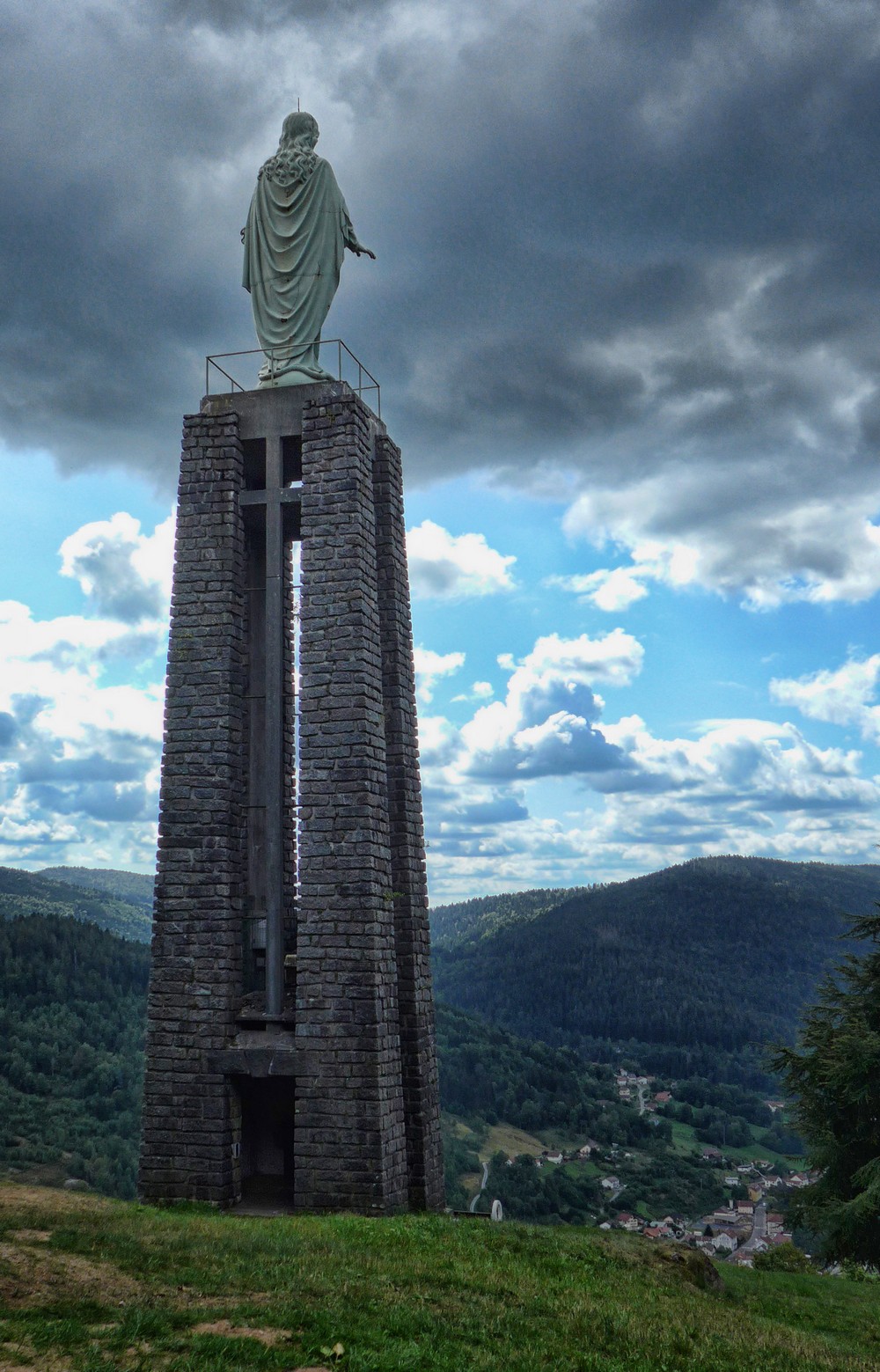 In addition to the amazing statue of Notre-Dame de la Paix (Our Lady of Peace), there is a excellent panoramic view of Cornimont. 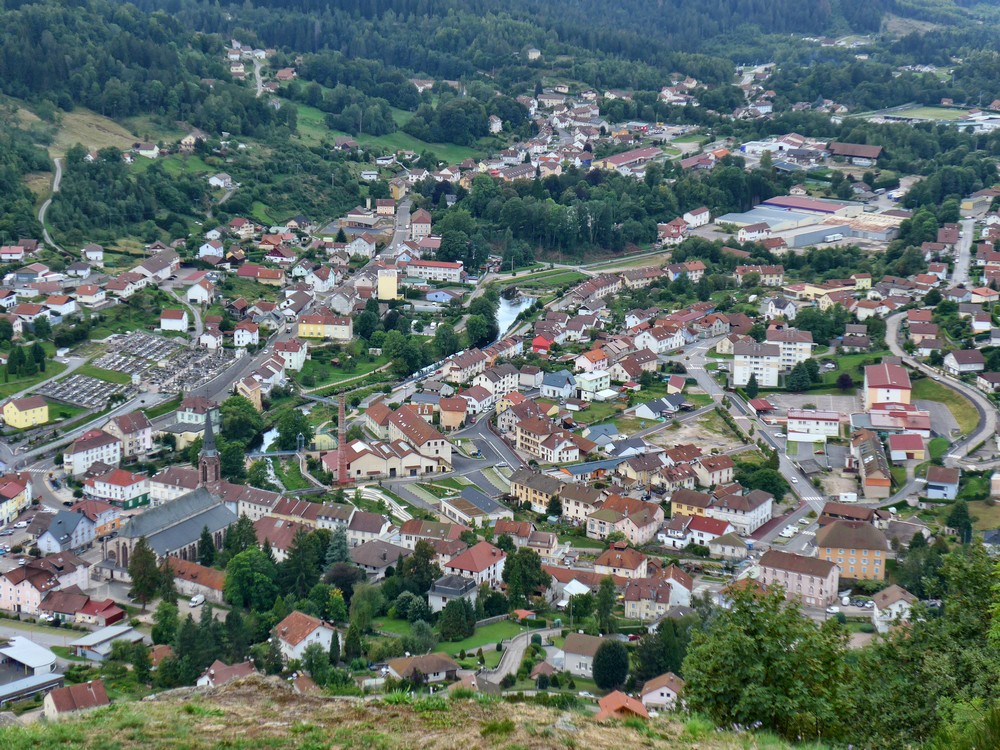 I had quite a sense of vertigo being up there. In fact I could barely bring myself to point the camera up towards the head of the statue. I always seem to get more vertigo looking up than looking down. I don’t know if that’s normal. 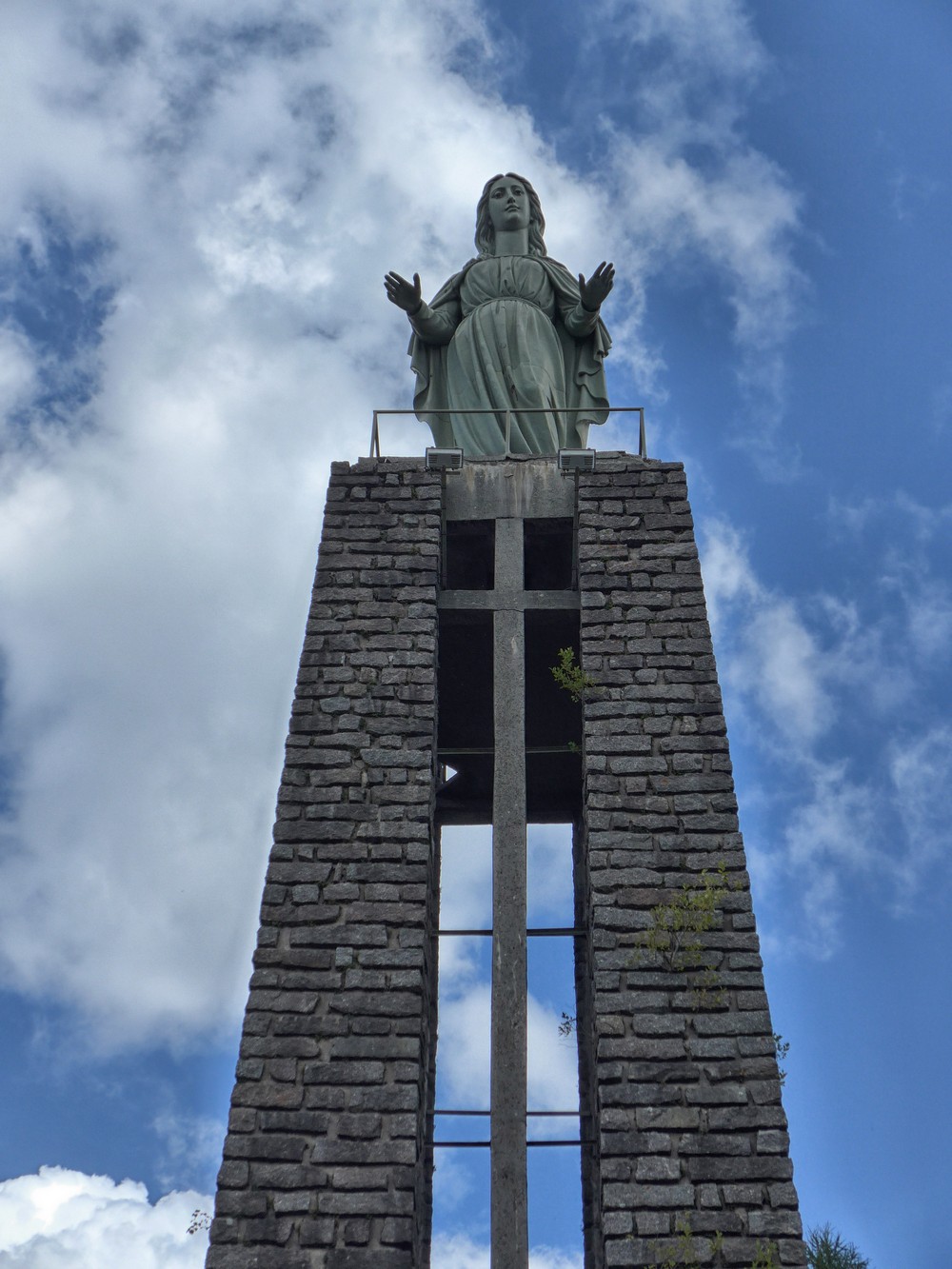 After taking sufficient photos, I struggled back up the incline to where my bike was and then pushed it up the hill until I reached a point where I could cycle on the edge of the gravel where the grass was.

Then it was back to the road and an easy downhill back to where I had first turned off my planned route. After all that excitement I was surprised to see that I’d only done 3½ miles! 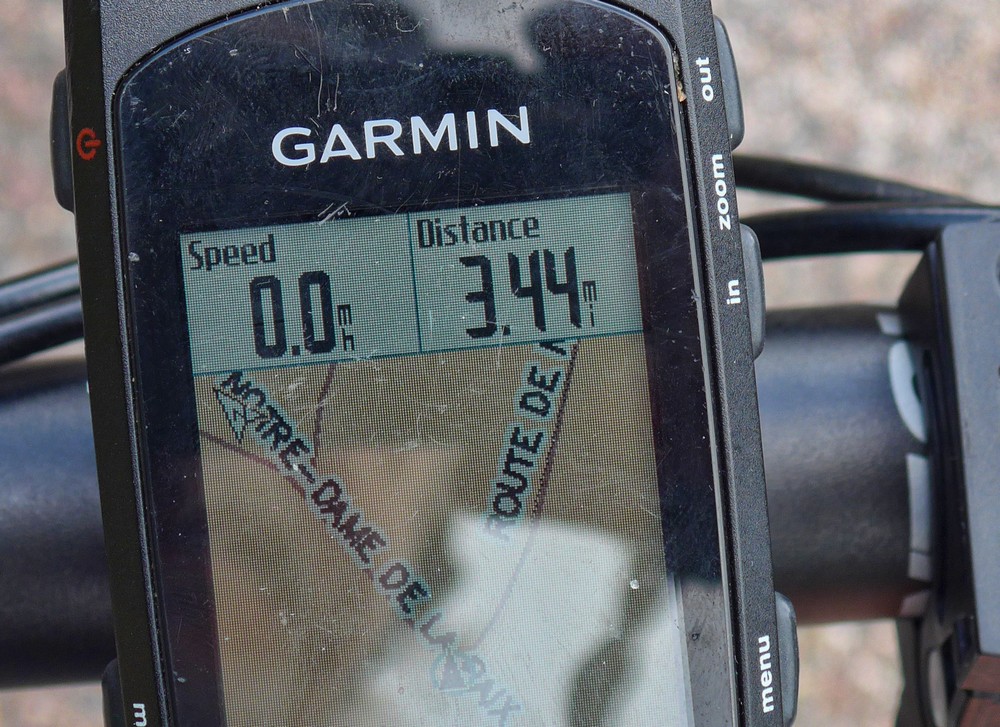 The road climbed through the forest to the ski station at Brabant. I don’t think I have cycled in such a steep hilly area before. The forested hillside plummets away extremely steeply from the roadside. 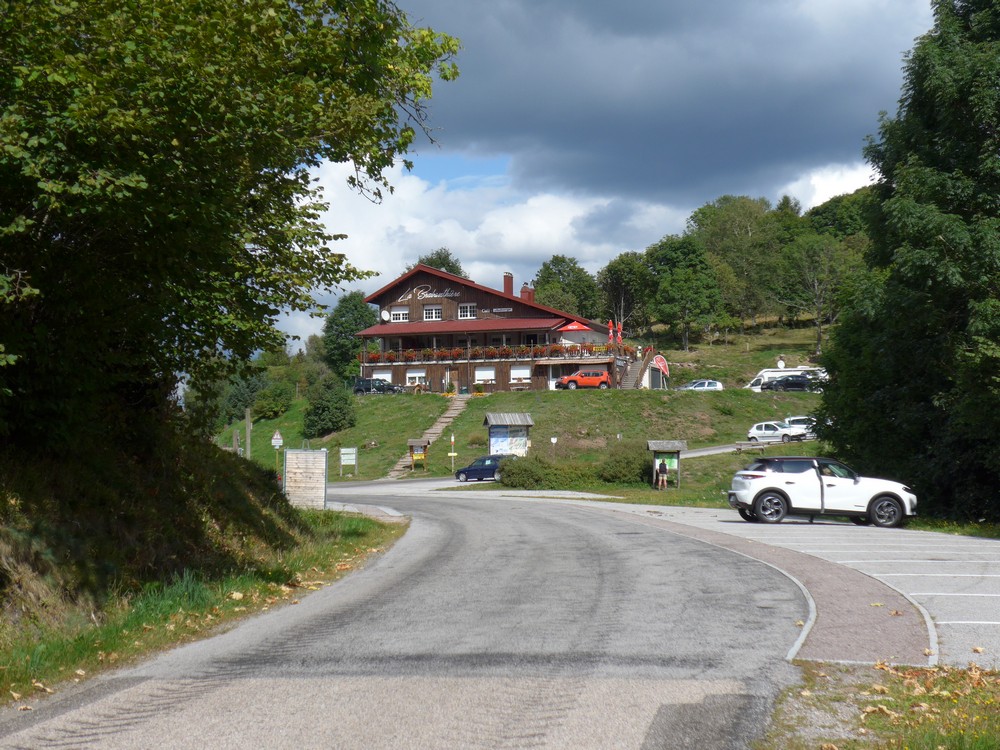 I had stopped to get a photo when a lady started approaching me with a leaflet in her hand. I looked behind me to see if she was heading towards something else but there was nothing else there so I knew she was coming towards me. And she started asking me a question in French. First thing I did was tell her that I don’t speak French very well but that I did speak a little. She clearly didn’t speak any English whatsoever. But I was still able to understand what she wanted and helped her, in French, to point her in the direction of some animal sanctuary she was looking for as described in her leaflet. I rode away feeling quite pleased with myself.

The next section of road was a gentle incline that offered a lovely view over La Bresse. 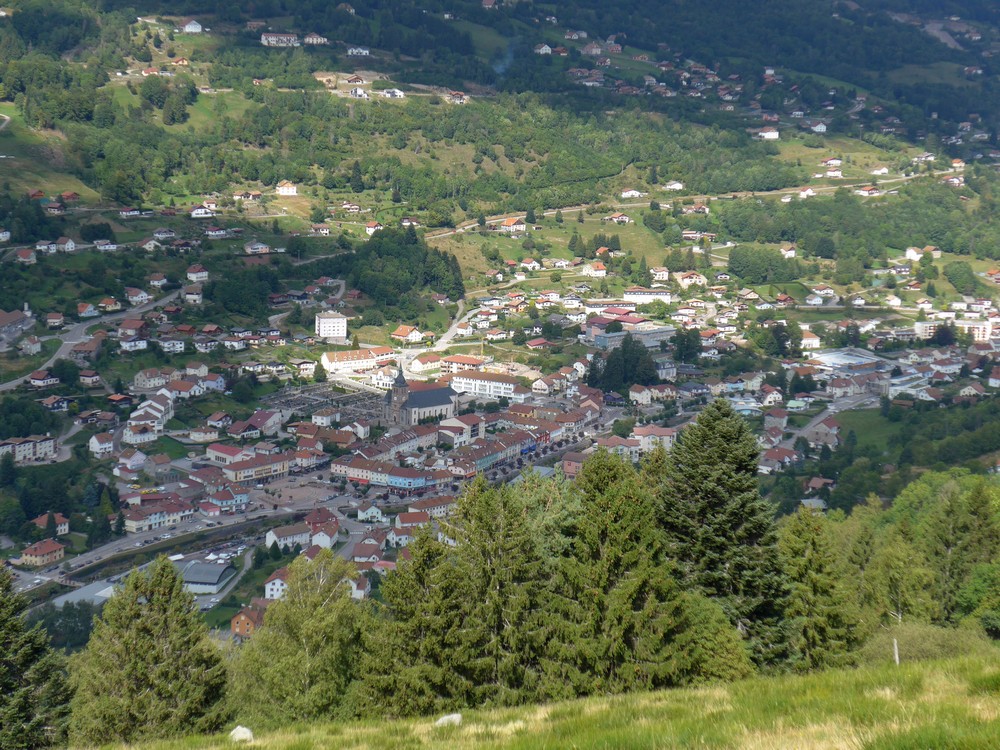 But soon the road was back into the forest for an ever-steepening descent towards La Bresse. I felt much more confident on the downhill sections with the new brake blocks. 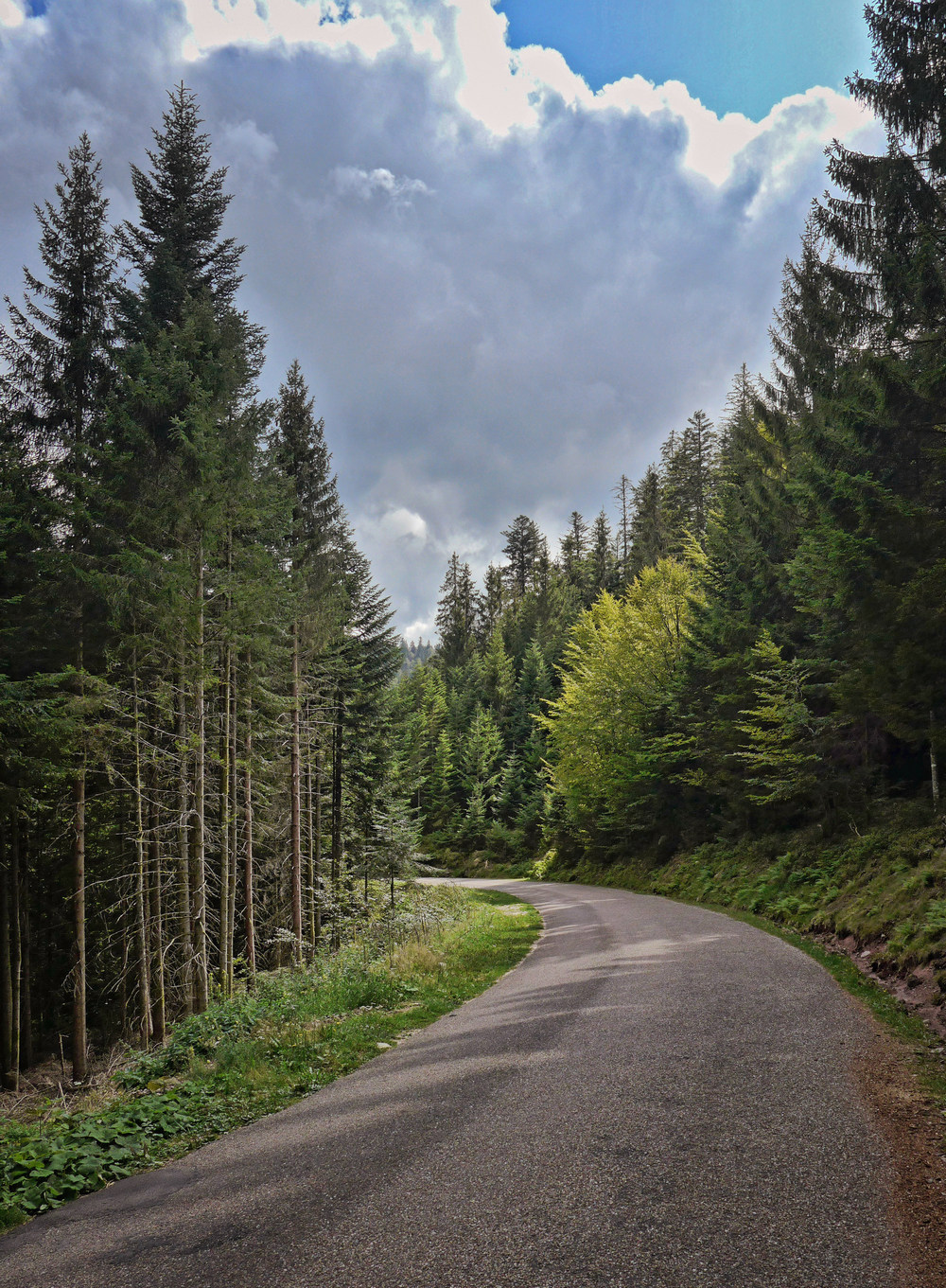 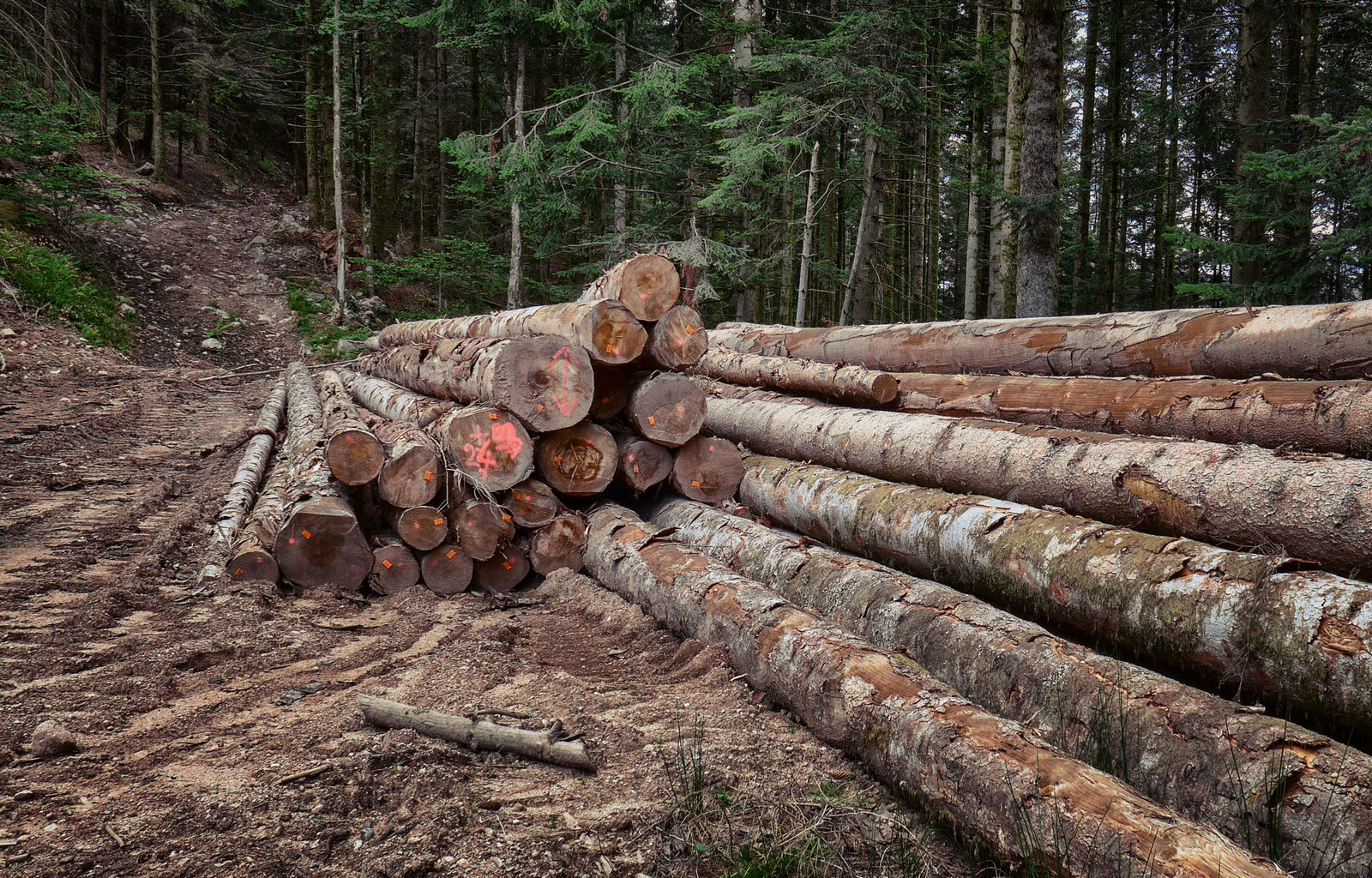 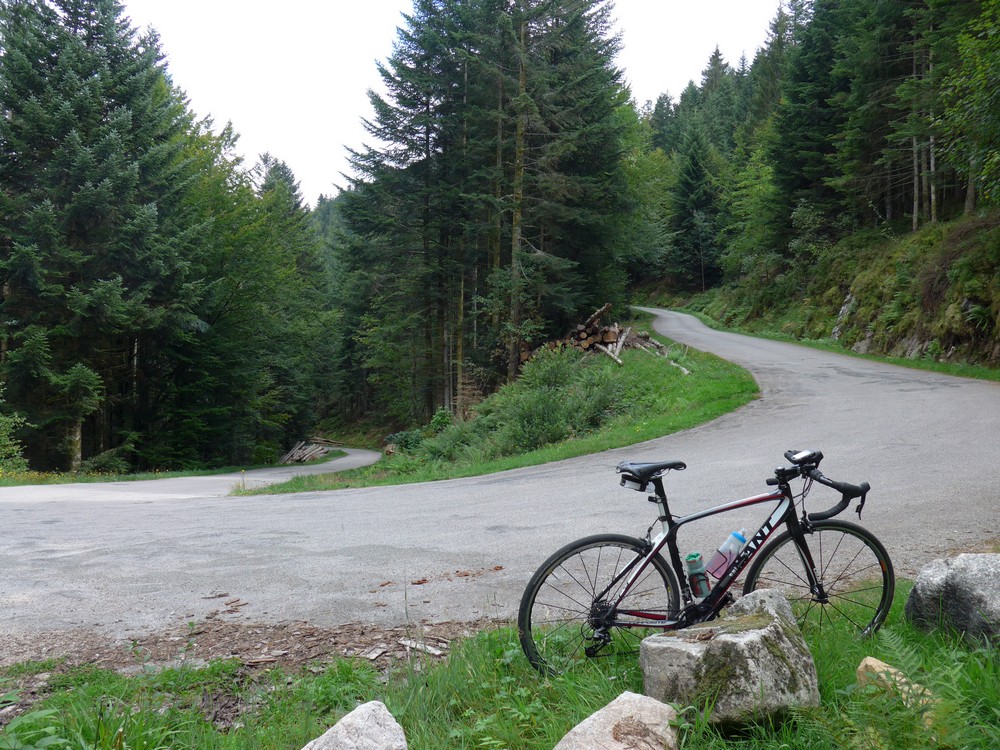 La Bresse is evidently some sort of cyclists’ Mecca, with signs such as Vive le Velo and Chalet des Cyclistes. There were so many cyclists around the place, it reminded me of Bédoin. 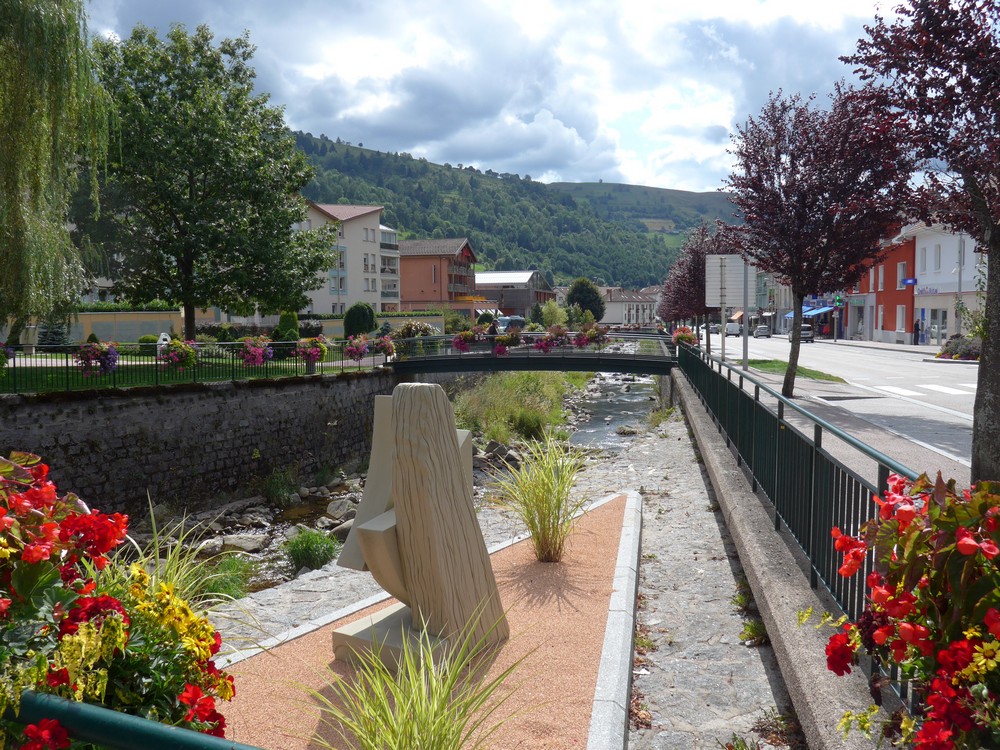 My route climbed steeply out of town but then eased into a reasonably easy climb to Col de la Croix des Moinats. I got the obligatory photo by the col sign, and then set off on the final 4 miles of descent back to base, the new brake blocks giving me more confidence. This route, same as yesterday’s, was made easier by my having reversed it. Some of the downward slopes were quite steep.