Thinking of the steep descents I would be doing during this ride, I wore a base layer, a roubaix long sleeved top, full-fingered gloves and my long leggings. I also took a cap with me in my back pocket and my lightweight rain jacket.

I set off at about midday. The weather was hazy sun and not that warm. The first half mile of this ride was along the main road, typical of this sort of ski resort type town, being full of chalet-shaped ski shops, restaurants, apartments, etc. It could have been in any ski resort. They all seem to look the same. But it happens to be a great place for bike rides.

The route turned right and immediately up a short but sharp 20% ramp and then started climbing more gradually up the hillside. All the hill sides are covered with chalets. I didn’t take many pictures because if you’ve seen one chalet-covered hillside you’ve seen them all. All the chalets are wooden alpine-style with balconies.

I was immediately aware of the difference between here and my last ride in the Vosges. On that ride from Cornimont, the hills were covered with the homesteads of people making a living from farming,  whereas here in Morzine they’re all luxury chalets and apartments of the privileged, most of which are probably sitting empty at this time of year between seasons. I find these places quite soulless. Except for the scenery 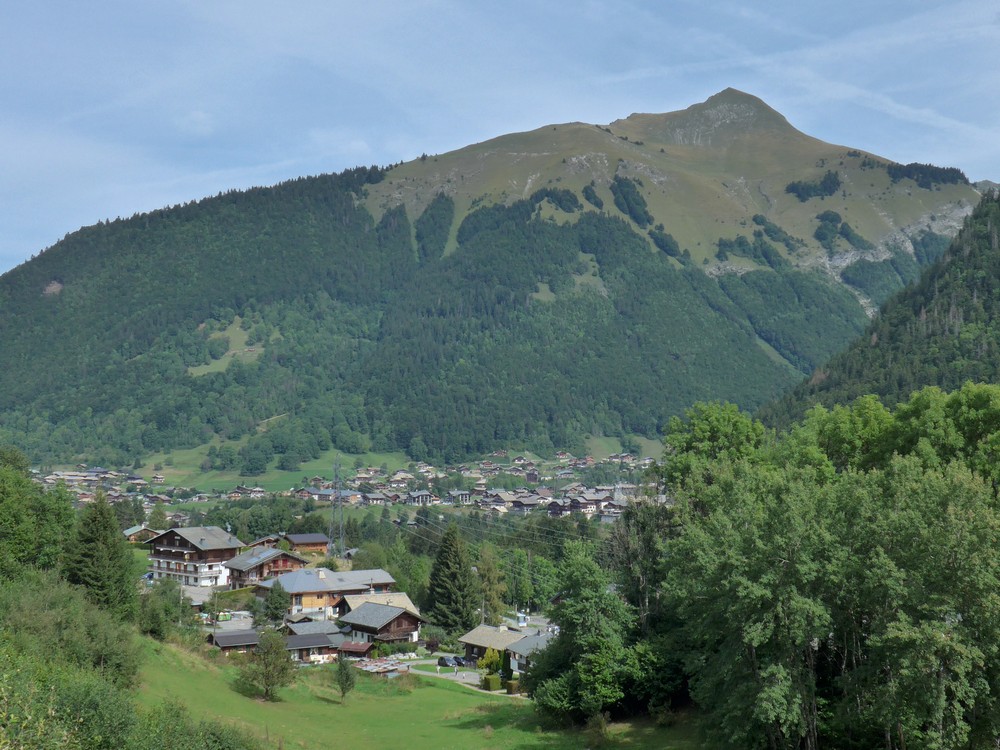 I soon climbed away from the town 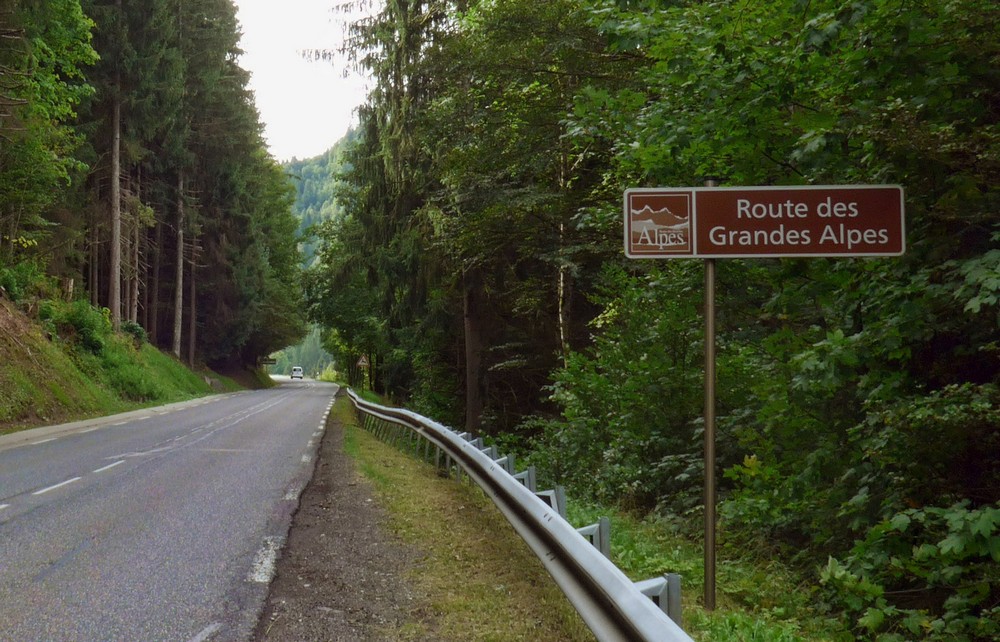 After four miles of easy climbing there was a massive 8-mile descent, during which it dawned on me that I was on the same road as I had driven along in the dark last night in the van, thinking I was in some sort of gorge. My thoughts had been correct. The road follows the gorge cut through the rocks by the Arpettaz river. It wasn’t particularly scenic. 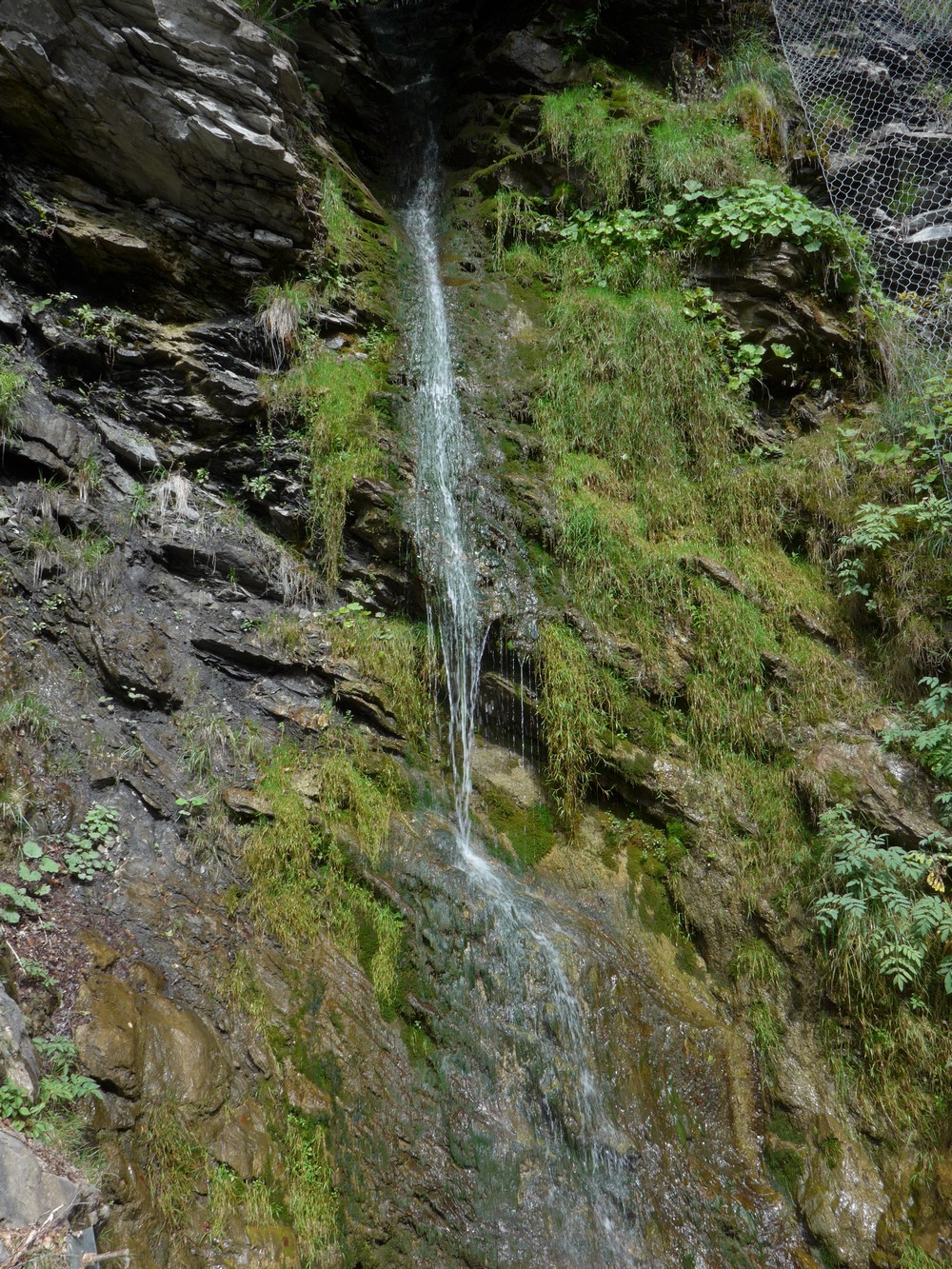 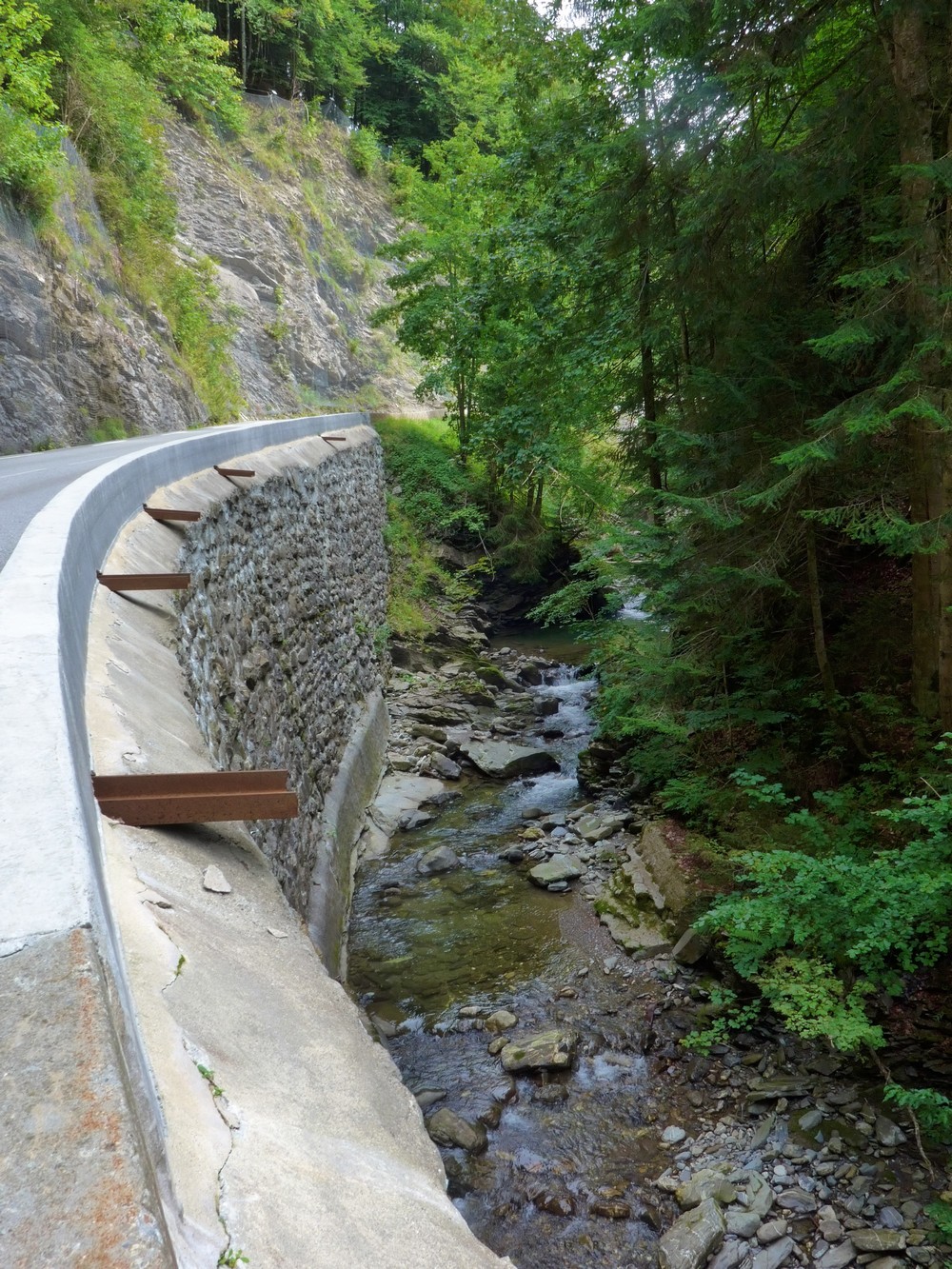 I was glad I had all my layers on because I was actually cold. My legs felt fine, but I think I should have worn a long-sleeved base layer. I also realised that, once more, that I’d forgotten to use lip balm.

It was quite busy on the D902 but there was enough space on the side of the road to keep out of the way. Earlier in the ride I had seen a sign that said the ravine road was closed. I didn’t know what that referred to. But shortly after I turned off the D902 onto the less busy D307, which followed the gorge on the other side, I reached the junction of the D328, where I saw this: 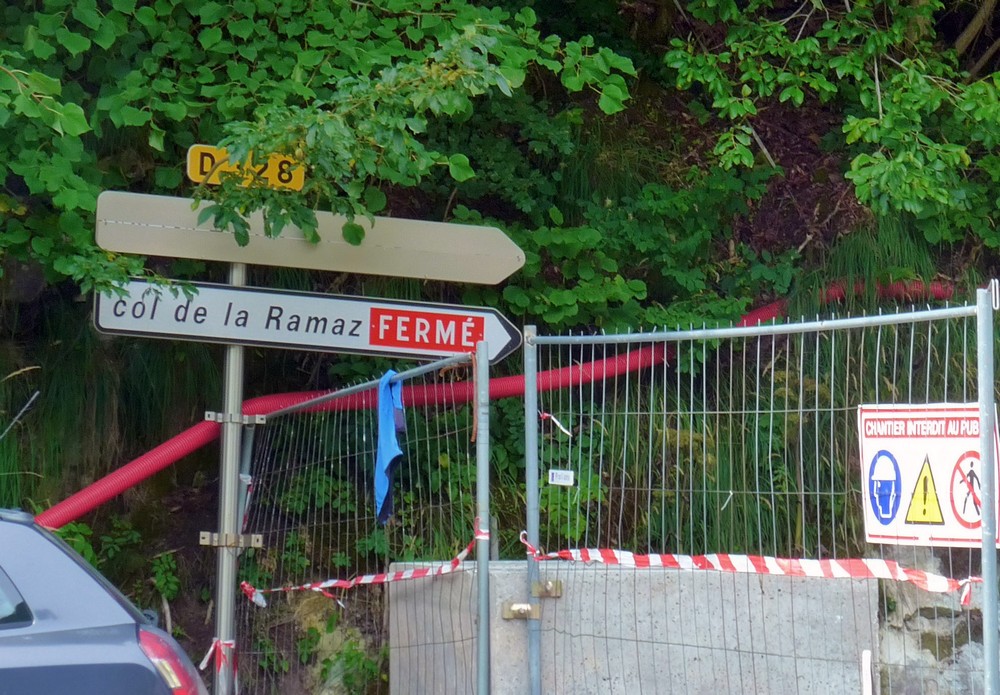 Luckily my route wasn’t taking me that way so I wasn’t too bothered but I just hoped that the actual col wasn’t closed at the top, from my direction. The road I was now on was quiet with no traffic. Looking across the valley of what was now the Foron river, I could hear, but not see, the traffic on the 902. 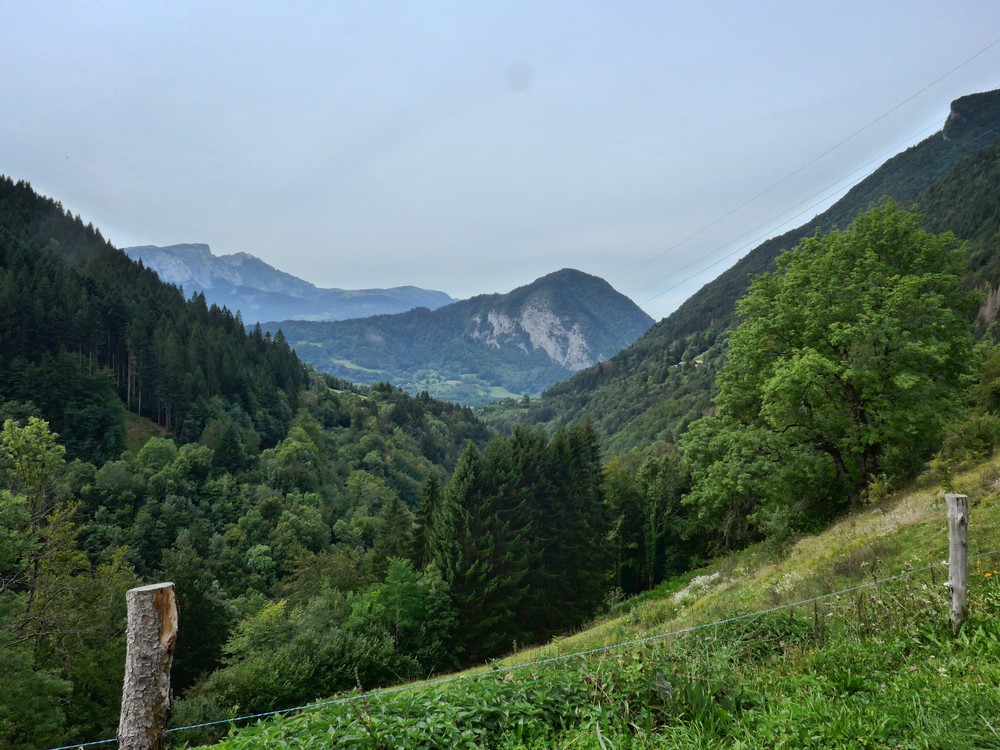 Soon, the view to my left opened out towards the snow-capped alps towards the south-east but it was too cloudy to pick out Mont Blanc 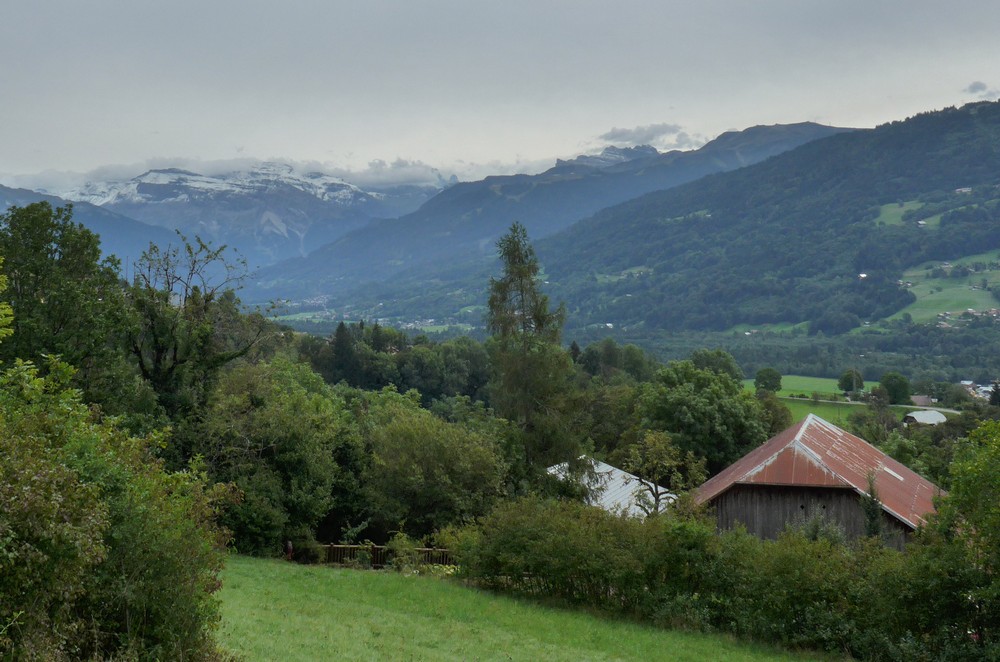 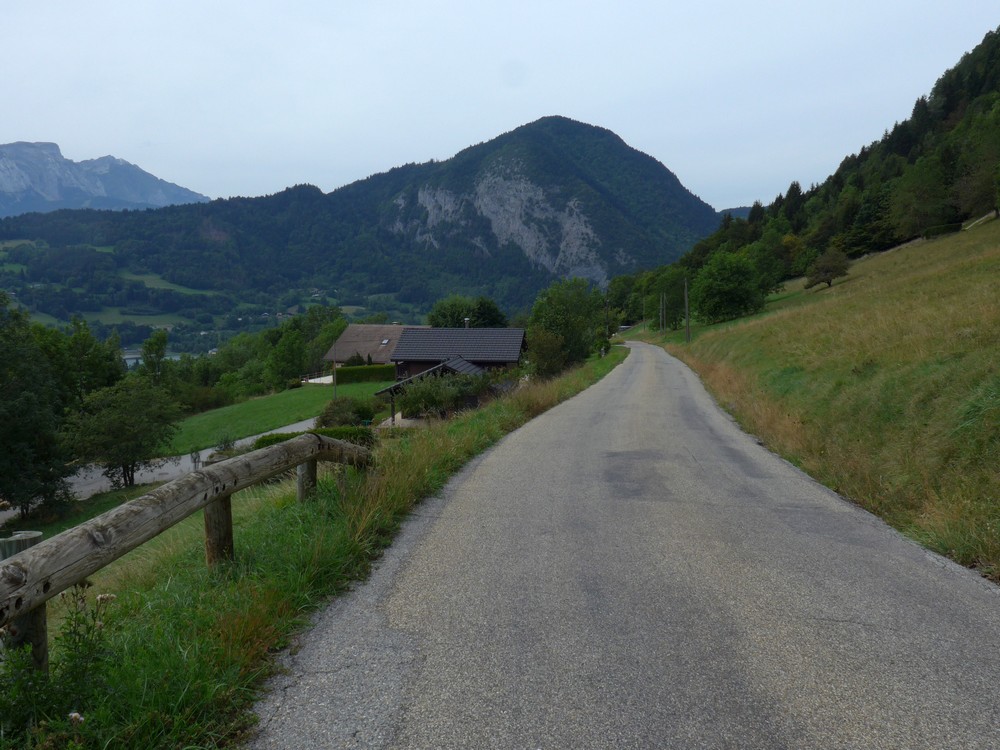 The road descended, through a series of hairpins, towards the town of Taninges, situated in the Vallée du Giffre. 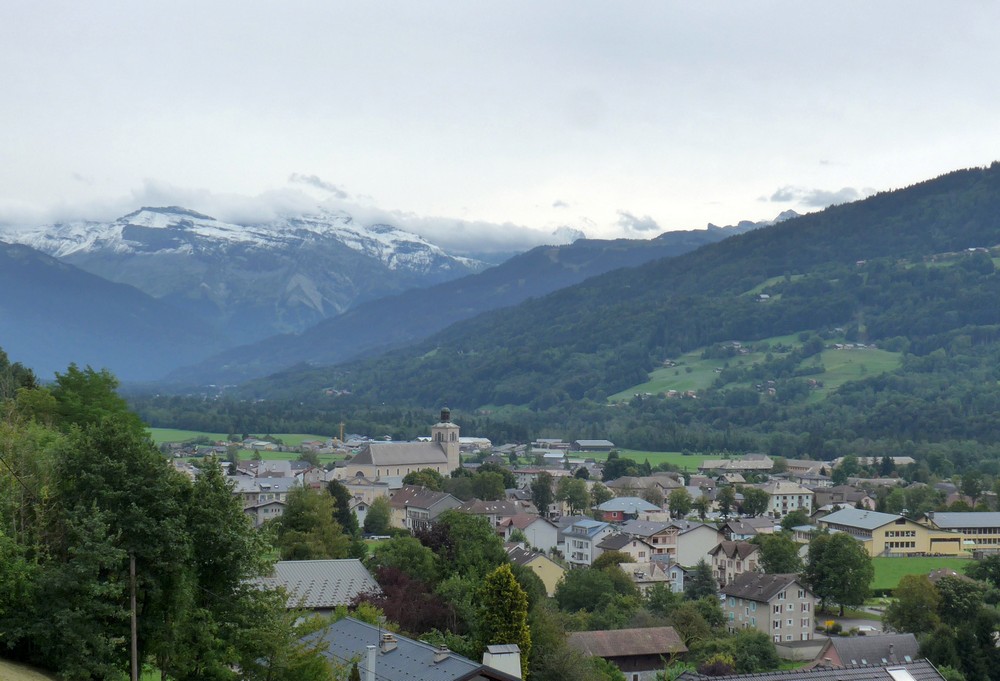 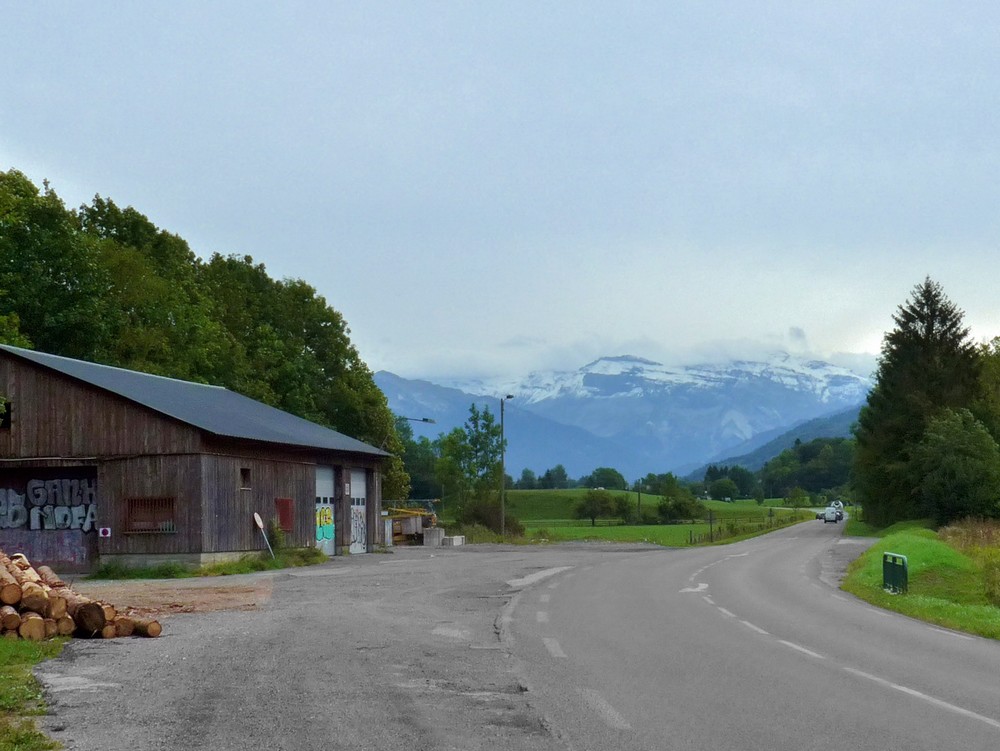 I had already made a note that the main climb of the day was at the 15-mile mark, and this was rapidly approaching. And when I turned off on to the much quieter D308, I entered the unspoilt farming village of Mieussy, where I was greeted with this sign 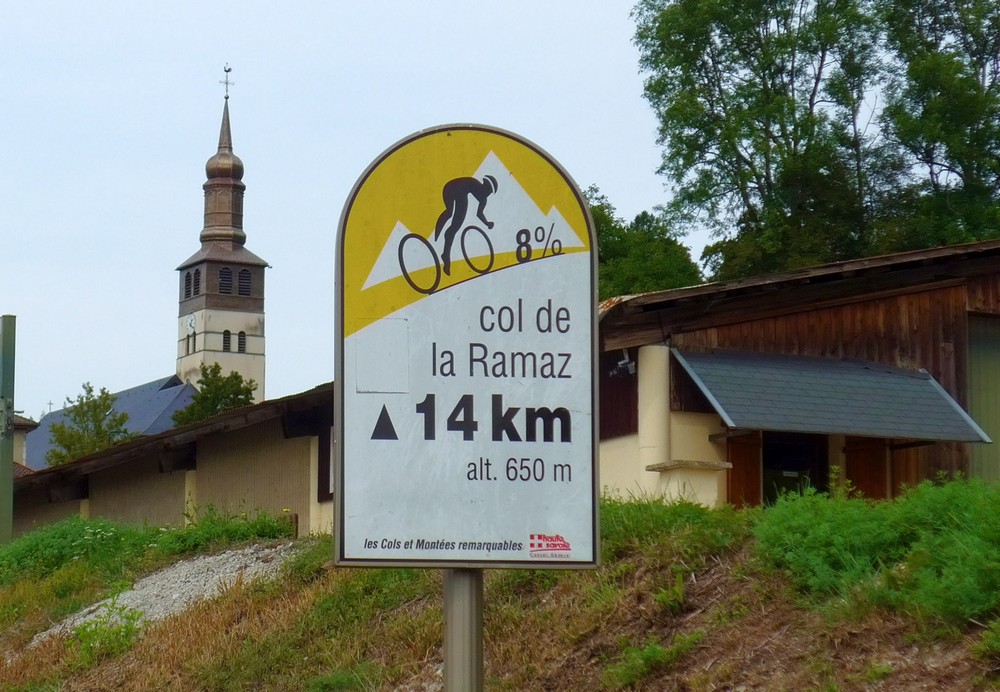 So this was the start of the climb. I sat in a wooden shelter opposite the church and ate my half a chicken mayo sandwich that was stuffed in my back pocket (that was half a sandwich, not half a chicken!). 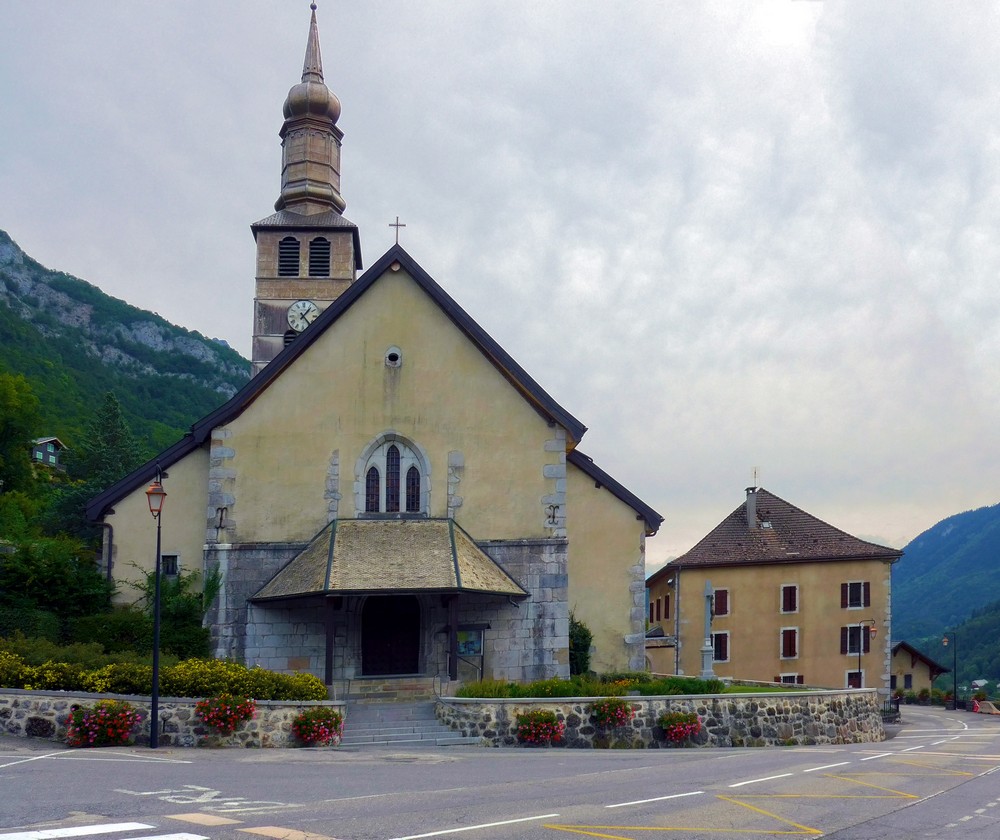 I supplemented my sarnie with an energy gel and started off. Those col signs are at every kilometre – they tell you how high you are and the average gradient of the upcoming kilometre. Here’s the profile. 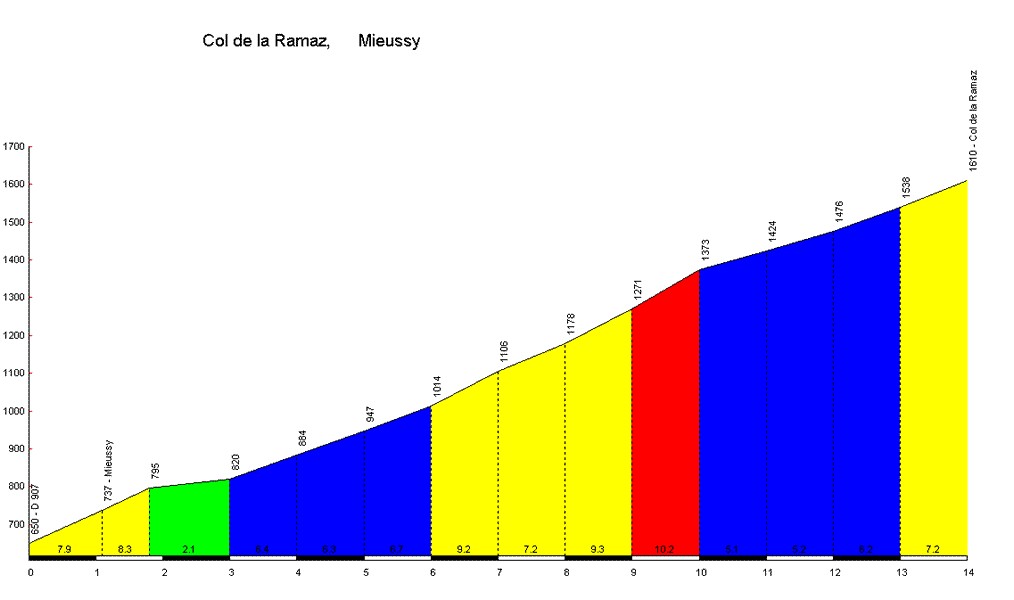 The first couple of kms were OK, as I was fresh. The third was a relief, but still climbing of course. The next section (in blue) started to take its toll. I have a cold so my energy levels were ebbing. I wanted, as usual, to do the climb without stopping. I was very warm – I kept shifting my helmet around on my head to let some cool air in. I unzipped my top slightly. I slowly ground my way up the incline. A few other riders passed me. I didn’t mind that – they were at least 30 years younger than me! The 1km markers were slowly passing. But somewhere in that yellow section it got so that I wasn’t feeling good. I found myself craving getting back to my van and just lying down and sleeping. If I had been able to turn around and ride back to the start all downhill, I would have done, but that was impossible because I would have to climb up that 8-mile descent I had done. So there was nothing for it but to press on. But somewhere in km 8 I had to stop. It was just too much. I had been half-treating this ride as a kill-or-cure for my cold, and it looked like it was turning out to be the former! I stopped for three minutes, during which time I had another energy gel. A short way further up I stopped again when I saw this: Just what I didn’t need was a section averaging 10%, with parts no doubt steeper.

The tunnel is on one of the steepest parts of the climb. Just after that comes signs of civilisation at Sommand.

Just through Sommand you can see the road sweeping around a huge bowl in front of you with the gradient looking reasonable. It disappeared between two hills and that’s where I assumed the pass was and that it would be easy from now on. It wasn’t. Once around the bowl and between those hills there is more steep climbing to be done to the end. I was really in no mood to see this sign 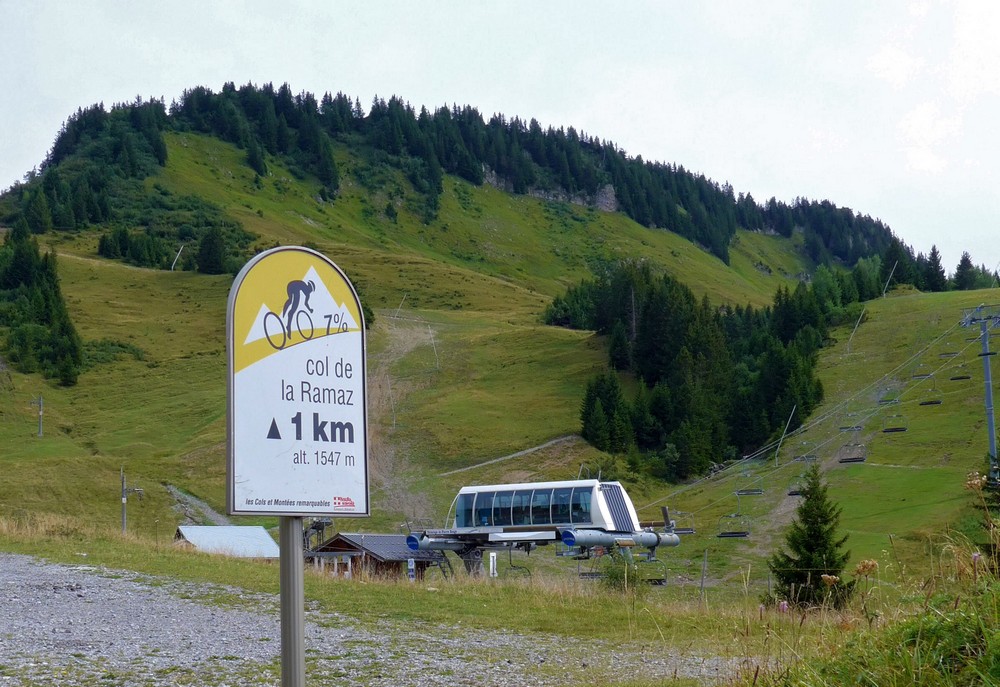 I was tired, sweaty, cold; my lower back was aching; every time I stopped I felt as if I might pass out. My sense of humour had left me. I remember getting stroppy when my bidon wouldn’t come smoothly out of the cage. I plodded on, but the climb got steeper, getting towards 9% just before the col. In fact I even stopped with the col in sight with just a few hundred metres to go. I got there in the end. 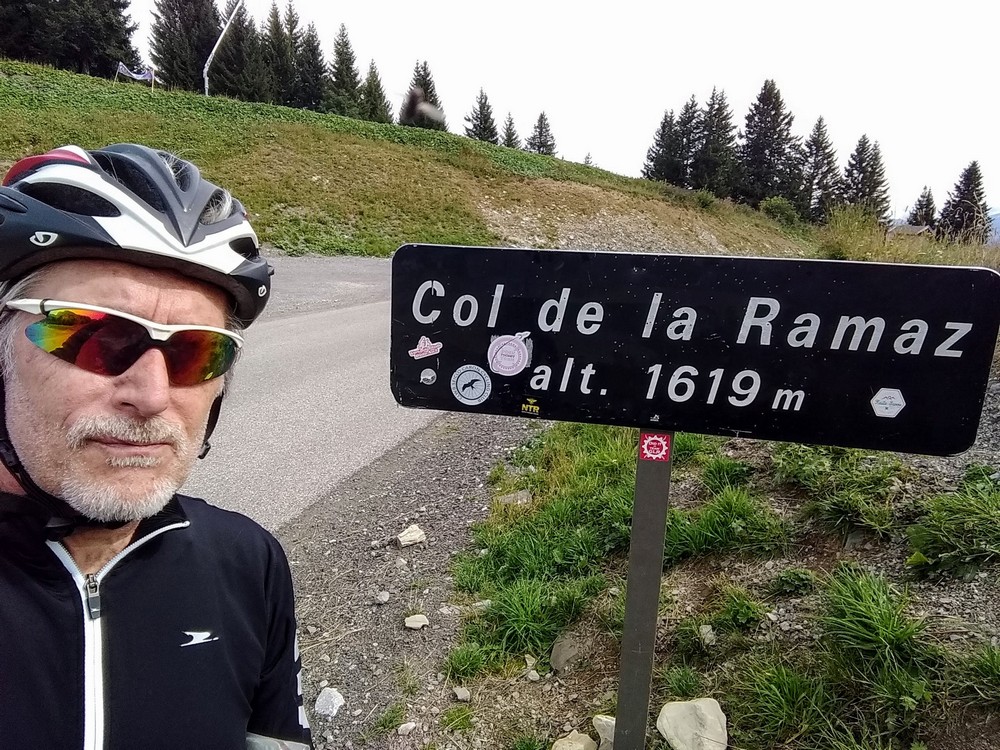 And I would at this point have been very relieved except I still had another col to climb on the way back. If I had known a downhill way back I would have taken it. I put my cap on under my helmet, put my rain jacket on and began the descent. 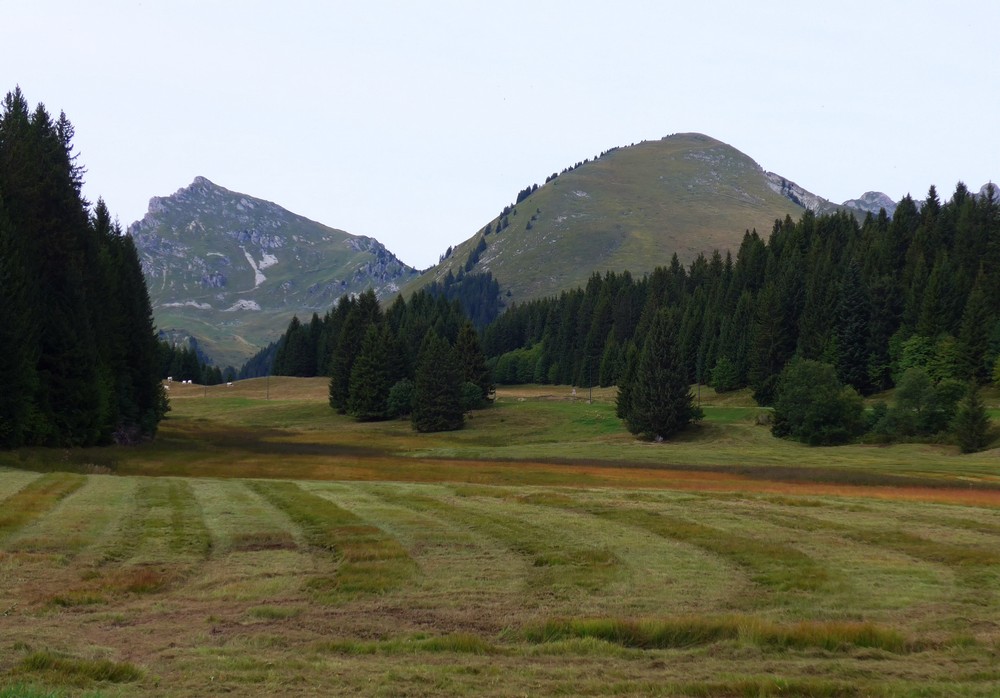 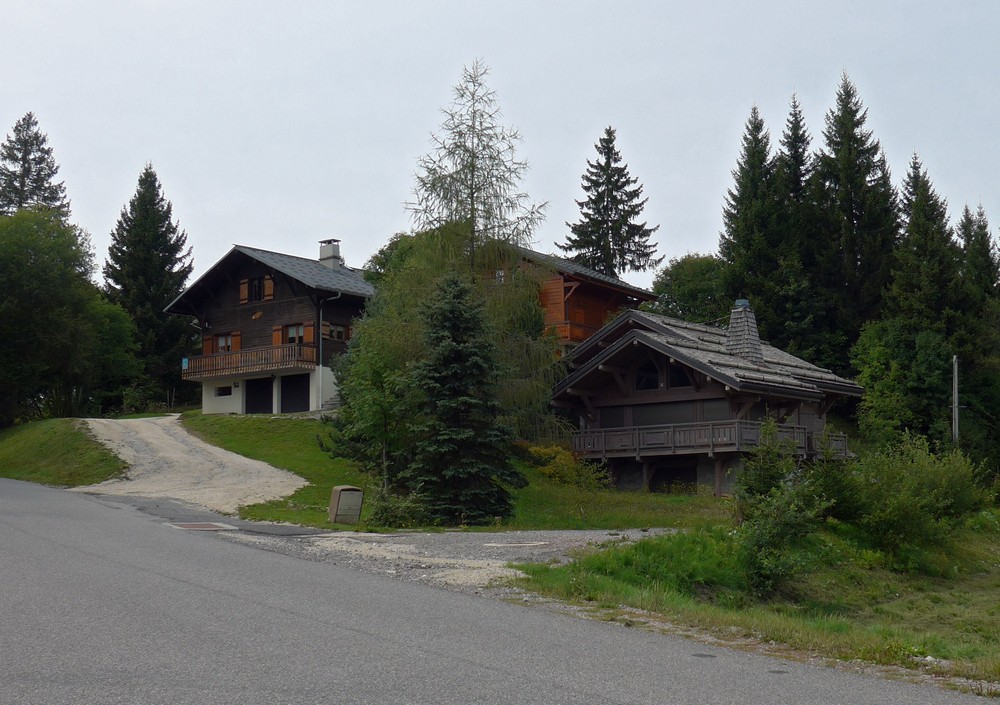 All I kept wondering (worrying) about was how tough the remaining climb would be. I was bombing down the hill when I saw the following scene ahead of me, but I had gone past the best viewpoint, so I turned around and rode back up the quite steep incline to get the photo – there’s dedication for you! 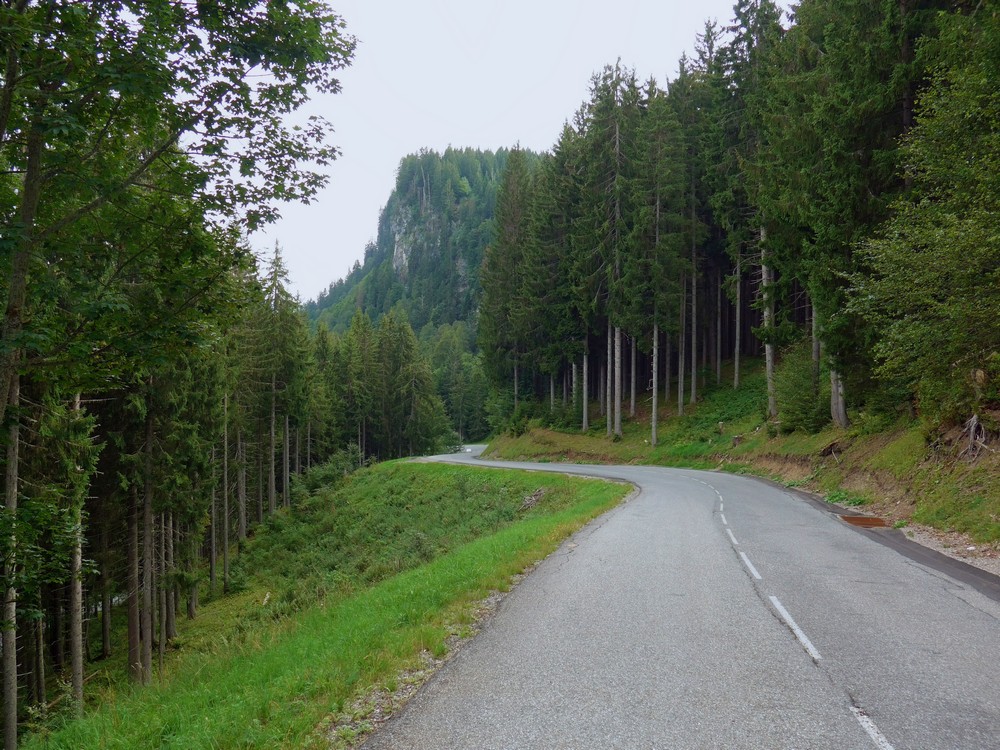 After four miles of descent, ending in a series of steep 9 or 10% switchbacks, the road started to climb again, but nothing too serious at first The four mile climb had some 9% sections and even a bit of downhill, but I eventually ended up at the Col de l’Encrenaz 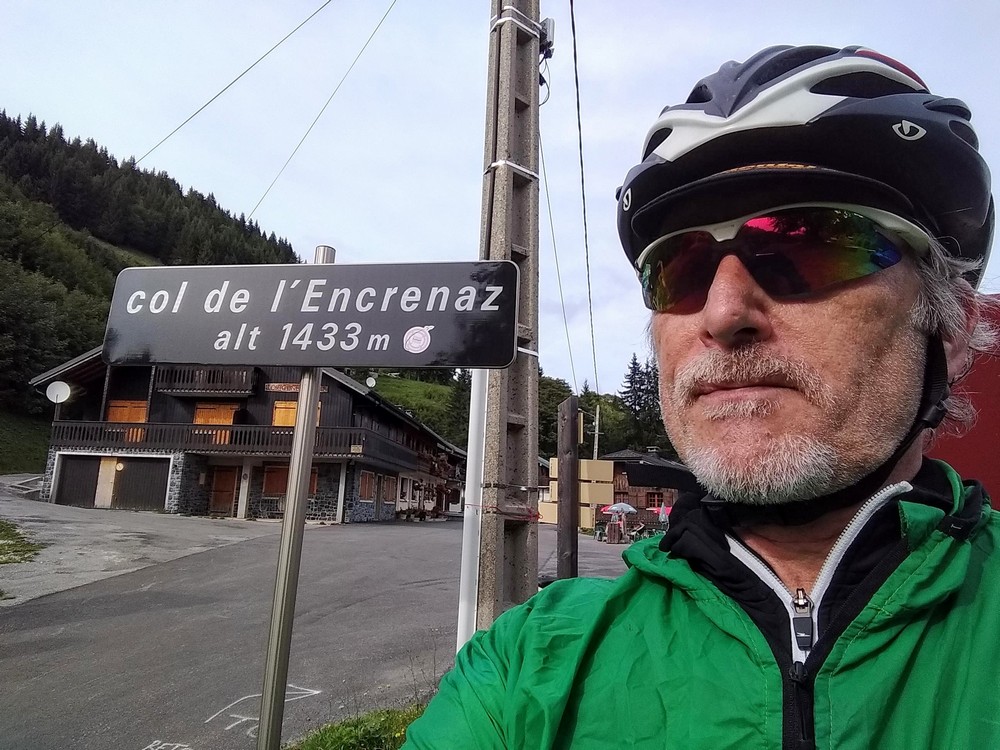 Now I was feeling relieved. The remaining descent ended up on some steep fast switchbacks. I was on the brakes most of the time. And lo-and-behold there was still a small section of climbing to be done before finally getting back to Morzine. In the end I didn’t feel as bad as I had done earlier in the day.

I probably wouldn’t have done that climb if I’d known how tough it was going to be for me with my cold and current fitness levels.