After the effects of my cold on my last ride, I decided not to do either of the two other big rides I had planned from Morzine. So I designed a shorter route. I simply looked on the map, saw some squiggly lines, which were no doubt switchbacks, and just plotted a circuit around that. The result was a ride up the Col de la Joux Verte, a well-known (although not to me) climb around these parts.

The morning sky was deep blue and cloudless. The sun was hot but the air was fresh. There was no way I wasn’t going for a ride today!

It was far too warm for longs. I wore shorts, short-sleeved jersey and a base-layer. I took my cap, arm-warmers and raincoat with me for the descent. I remembered lip balm this time, and also sun-blocked my arms, face, neck and knees.

I set off just before 1 pm. 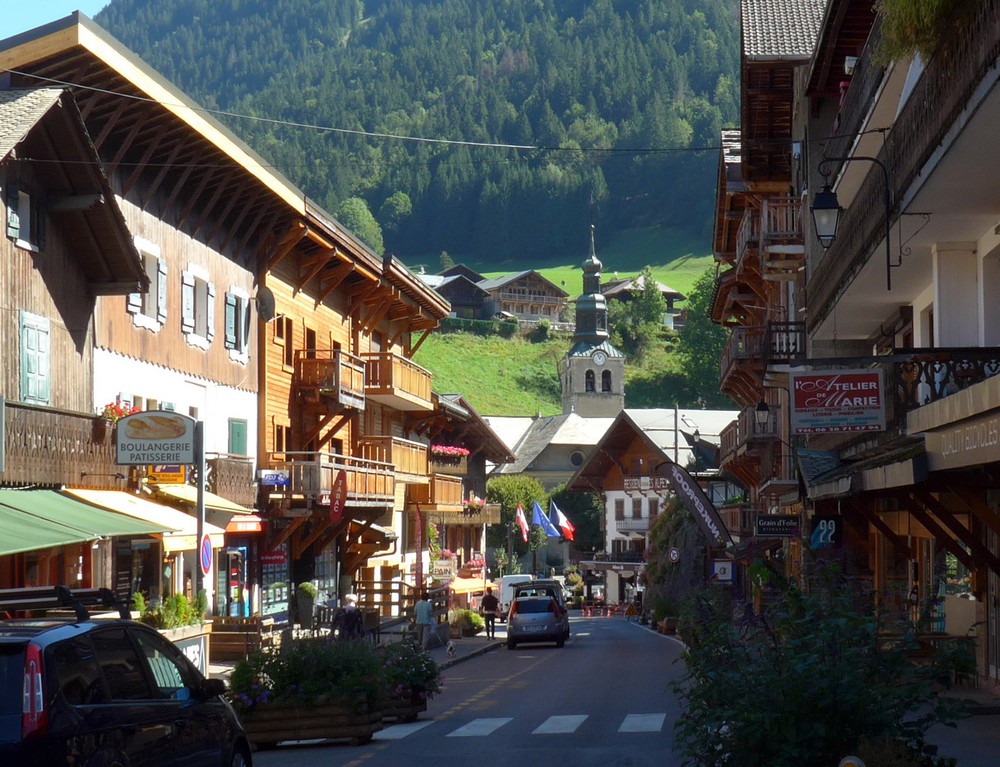 Just out of Morzine the climb began. The usual col signs were there throughout the ride, at 1km intervals, with useful data to help you decide when to panic. 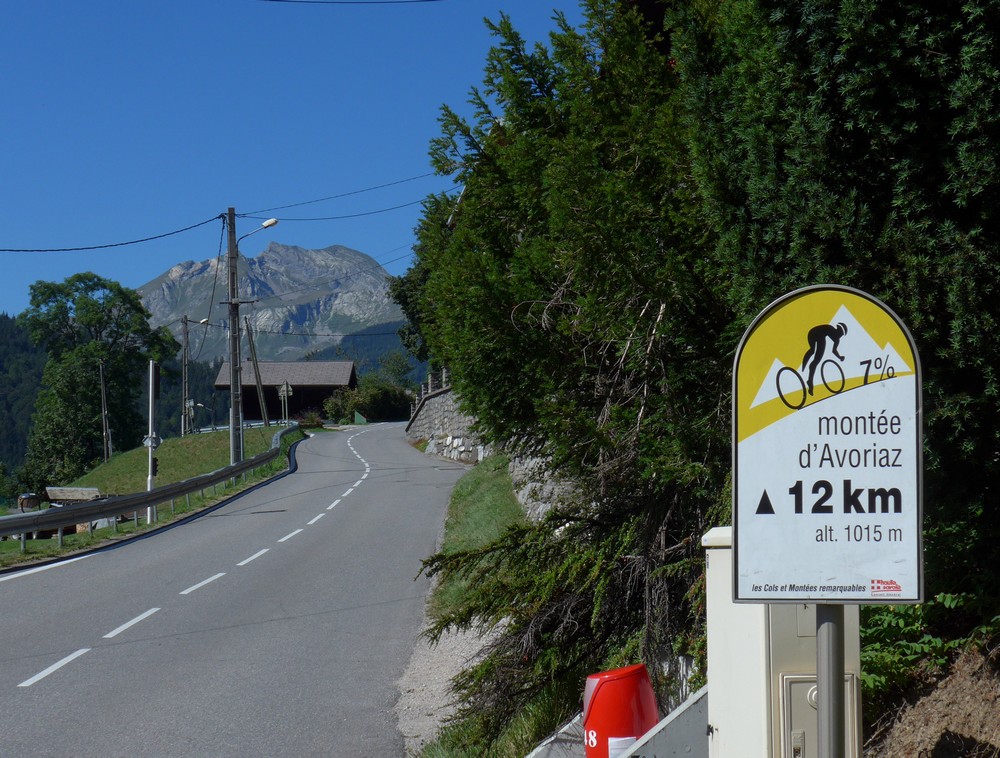 No fewer than twenty switchbacks got the first 1500 feet out of the way, most of it at 7 or 8% gradient and most of it exposed to the blazing sun. My legs were doing fine. The only issue really was the heat. As usual I revelled in the cool of the shade when it cropped up, which wasn’t often. There was amazing scenery but I thought I’m never going to do it justice with my camera – just another photo of a tree-covered mountainside or aerial view of alpine towns. I stopped for a photo or 2 and once for an energy gel, but it wasn’t like the last ride where I just couldn’t go on. In fact I felt OK.

After the switchbacks the road more gently wound its way up the mountain. It was exposed and I was hot. The only thing I was worried about was the back of my right calf getting blasted by the sun – I hadn’t thought of sun-block there. I even considered stopping and seeing if my arm-warmer would stretch over my calf!

Eventually I saw signs of civilisation, which was both good and bad – good that I could see my destination in sight, and bad because it was a blot on the landscape! 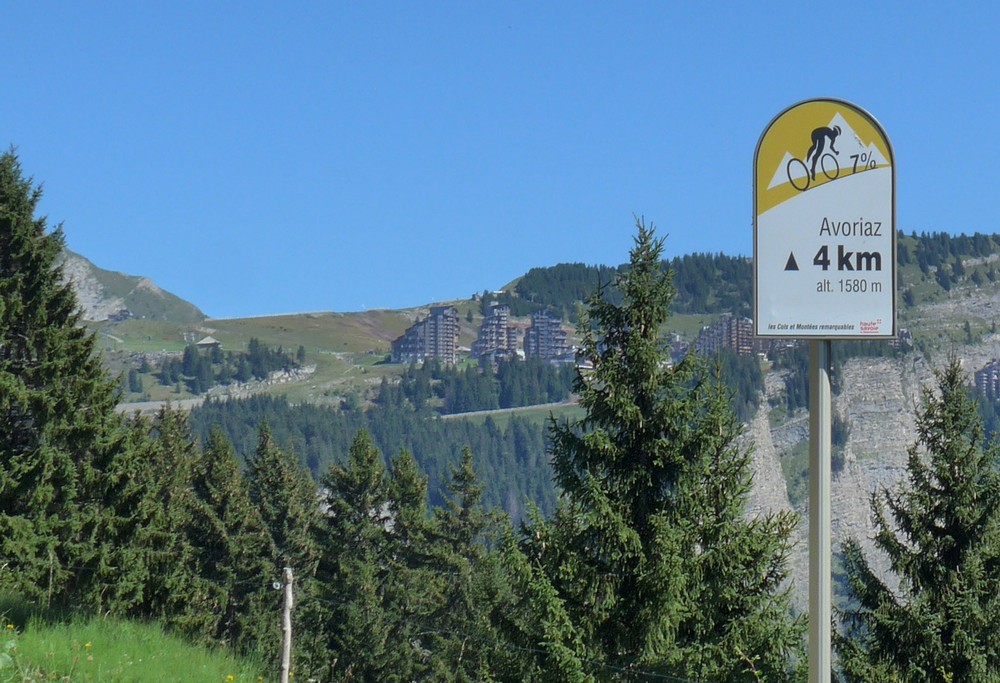 The last couple of ks were at 6% and the road went around a bowl as it approached the col, like in my last ride. 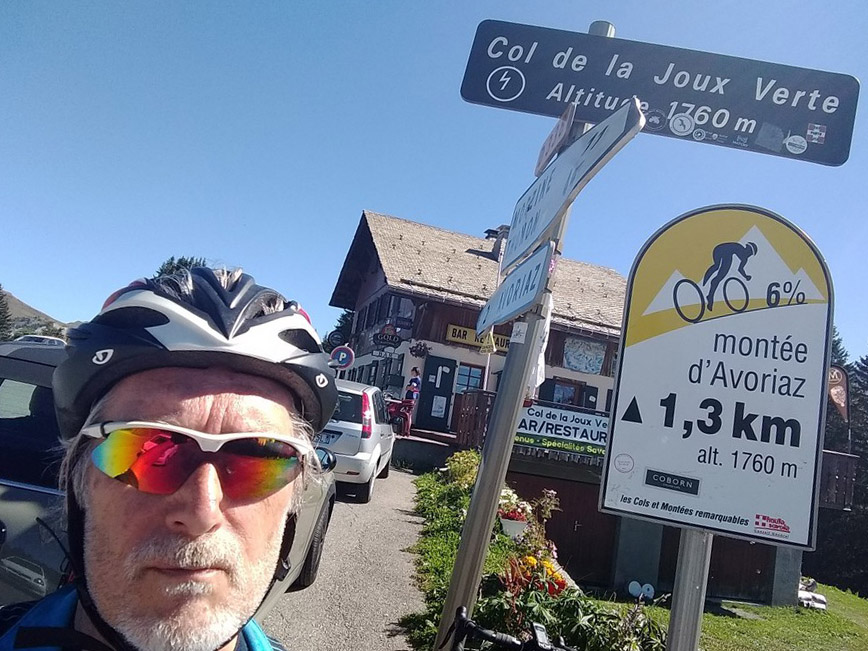 At the col I could decide to return, but I had planned a slight extension in case I was feeling OK. Well I was OK, so I kept climbing to Avoriaz. I had planned to go further and see a lake. The place was like a building site. 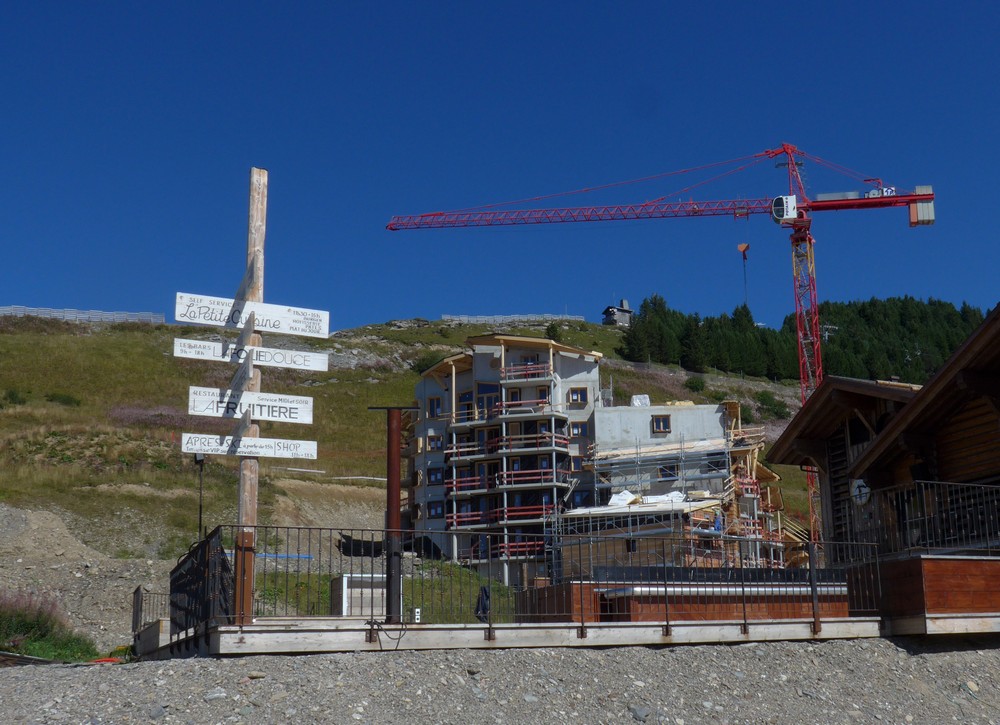 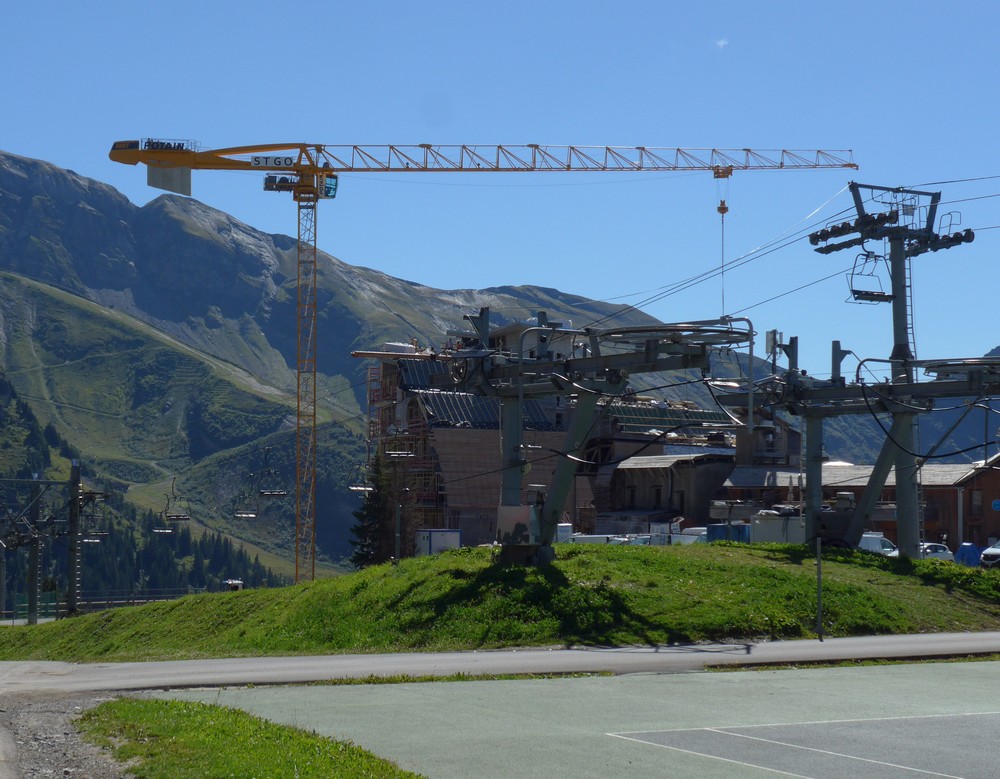 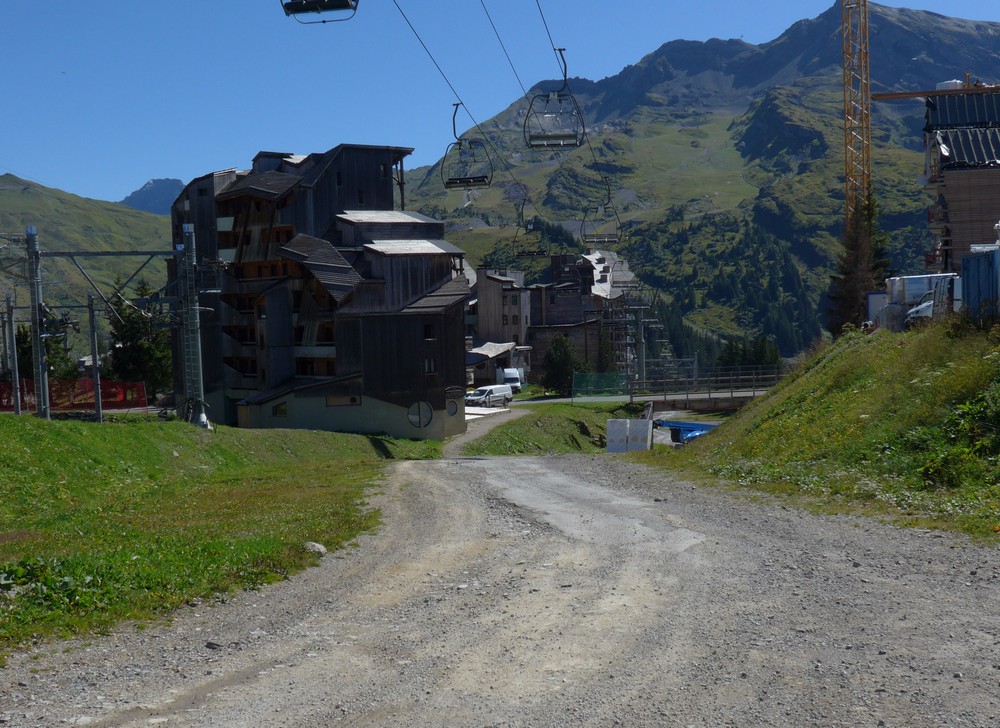 Some of the buildings were photogenic and some perched impressively on the edge of a sheer drop, but it just a massive tourist resort up there. 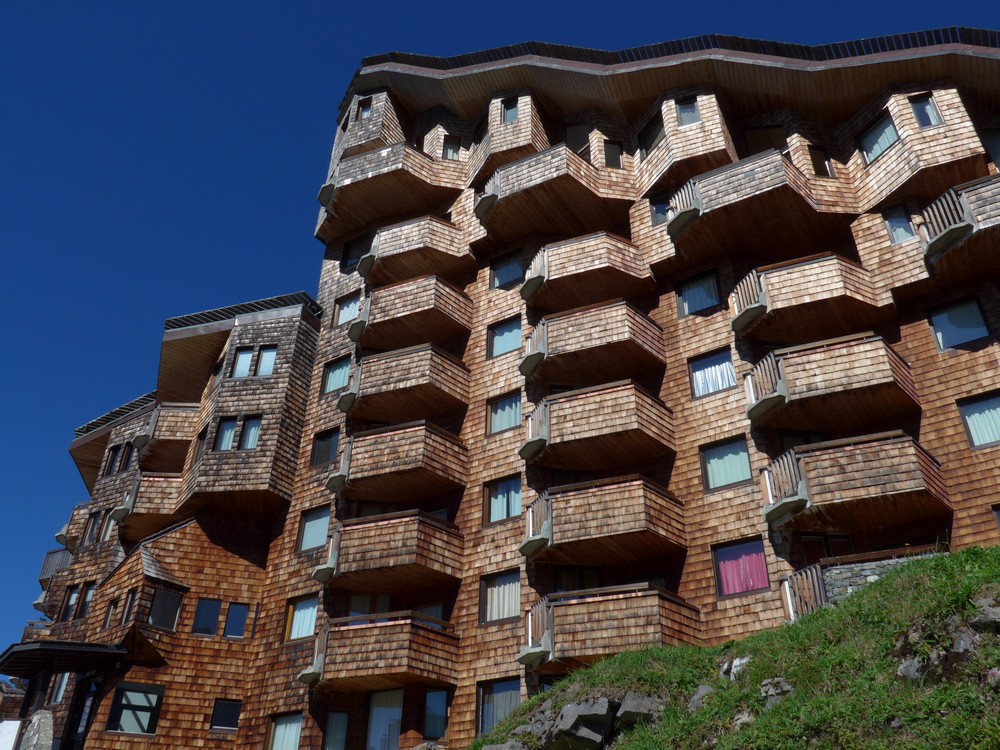 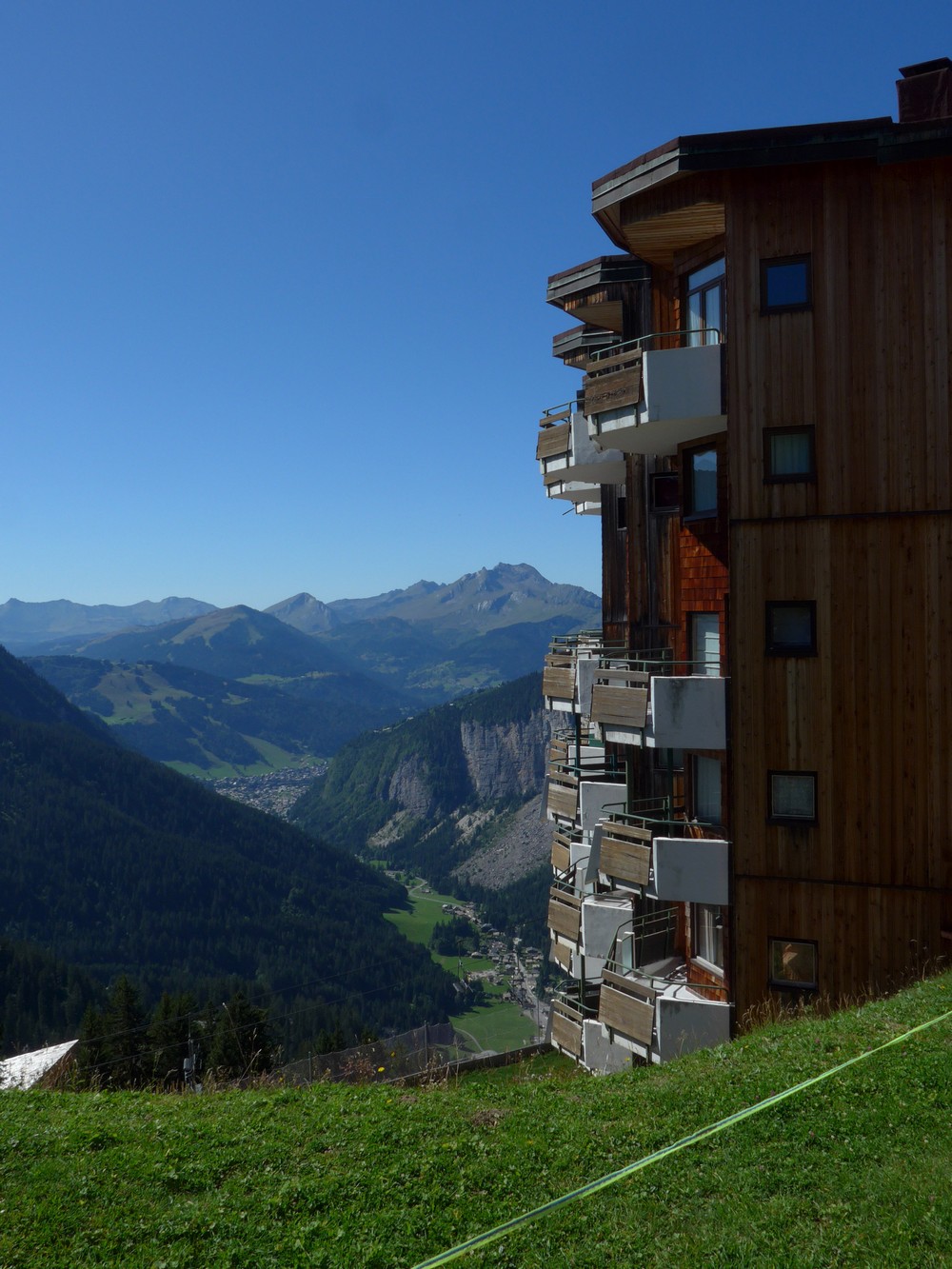 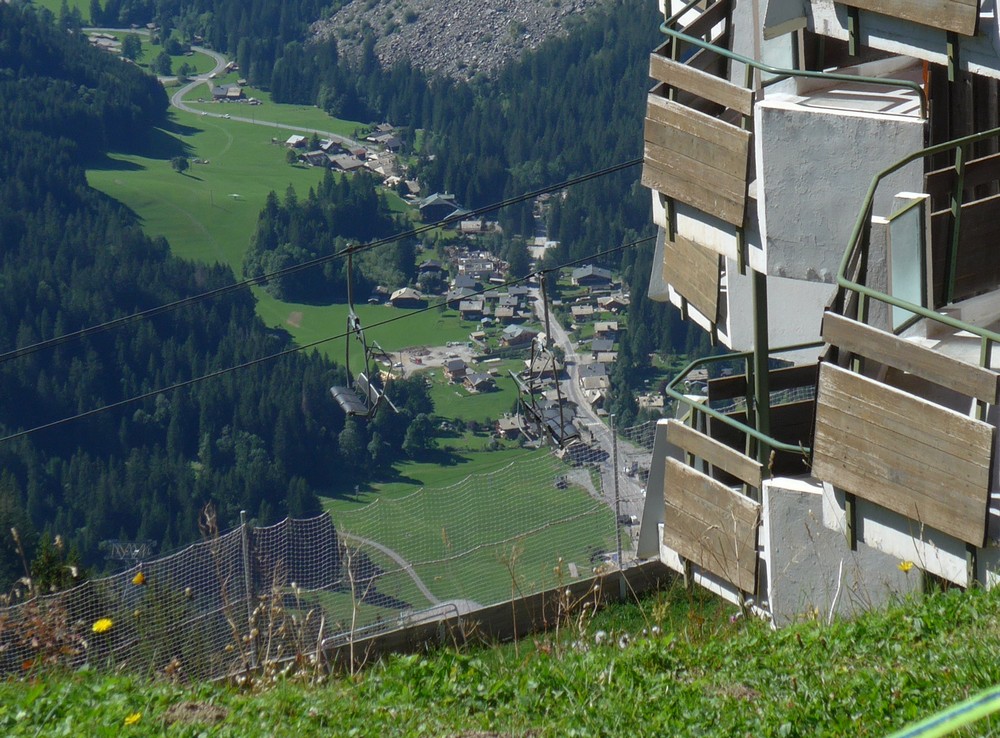 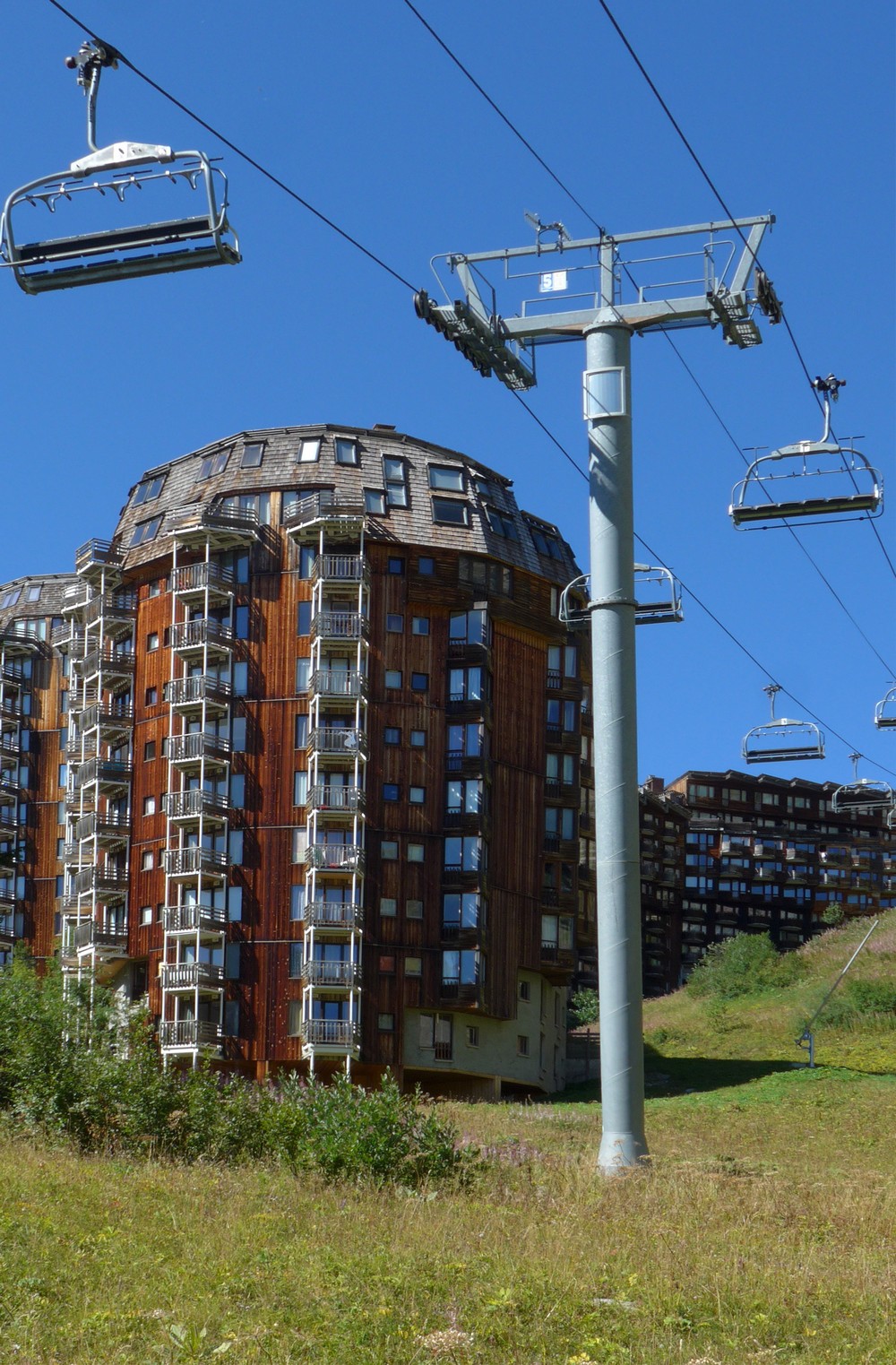 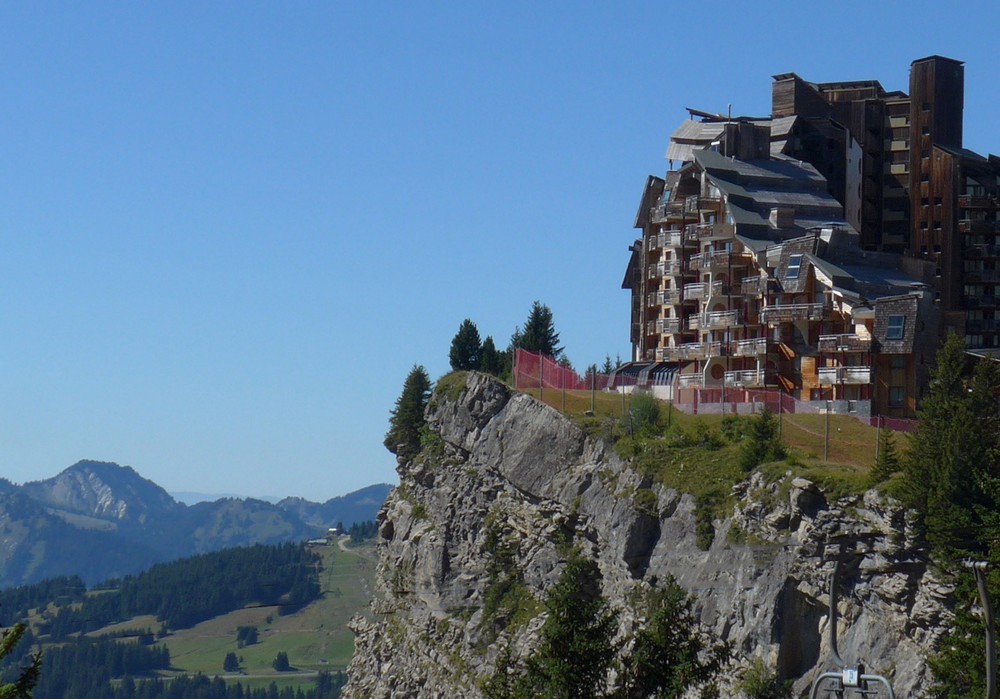 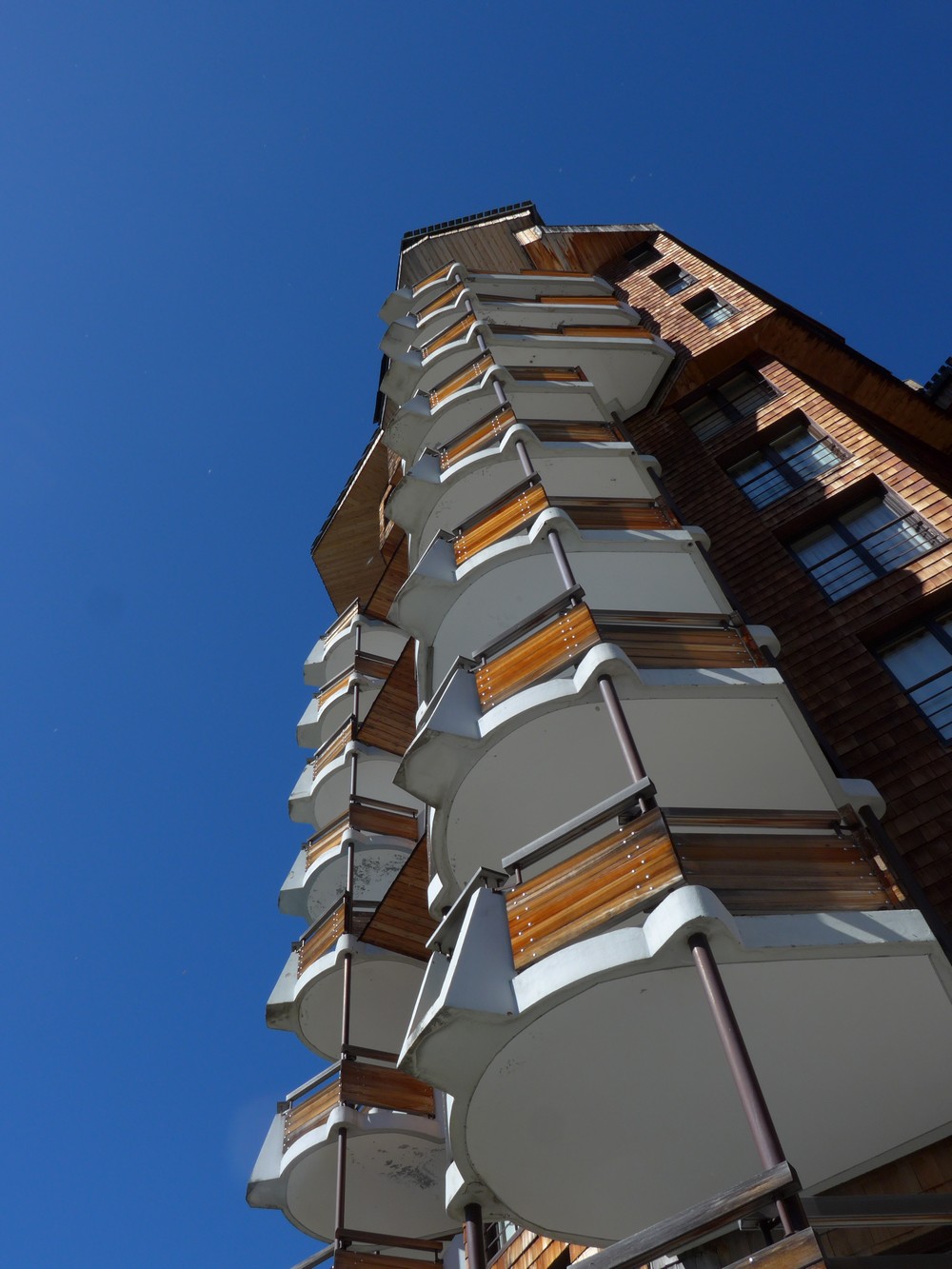 Of, course at this time of year there were mainly just construction workers around. It must be heaving in the winter, like a mountain-top version of Marbella. I asked a couple of people about the lake – the second one confirmed ‘en bas’, and I followed the direction of her gesture. But a bit further on I decided it was a bit too ‘en bas’ for me, because it was a gravel track descent to a rather uninspiring puddle. 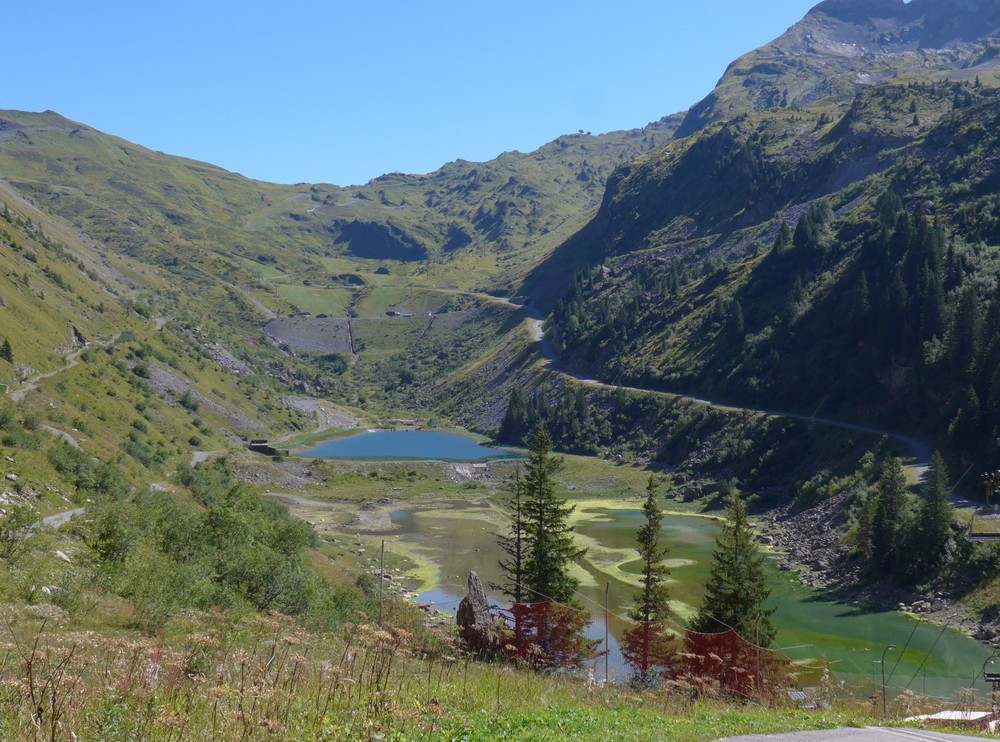 So I climbed back through the building site and escaped from Avoriaz, never wishing to return.

Back at the col, I put my cap and arm warmers on. My route descended the north side and this was a tree-lined road through forests. 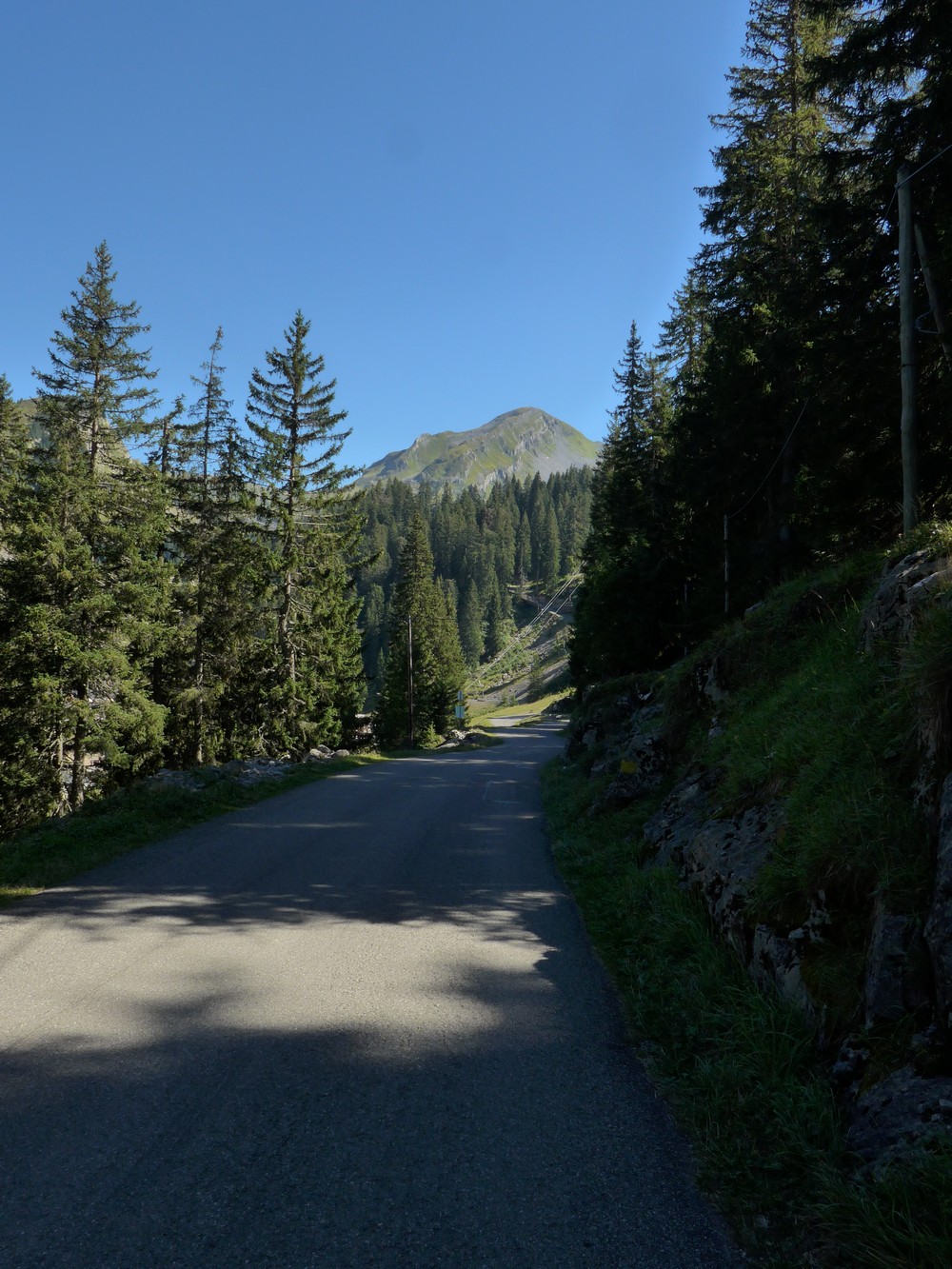 After about a mile I stopped again to put my rain jacket on, to help keep me warm. Initially hairpin-laden, the road gradually evened out and came to the village of Les Lindarets, where there were goats roaming all over the place. 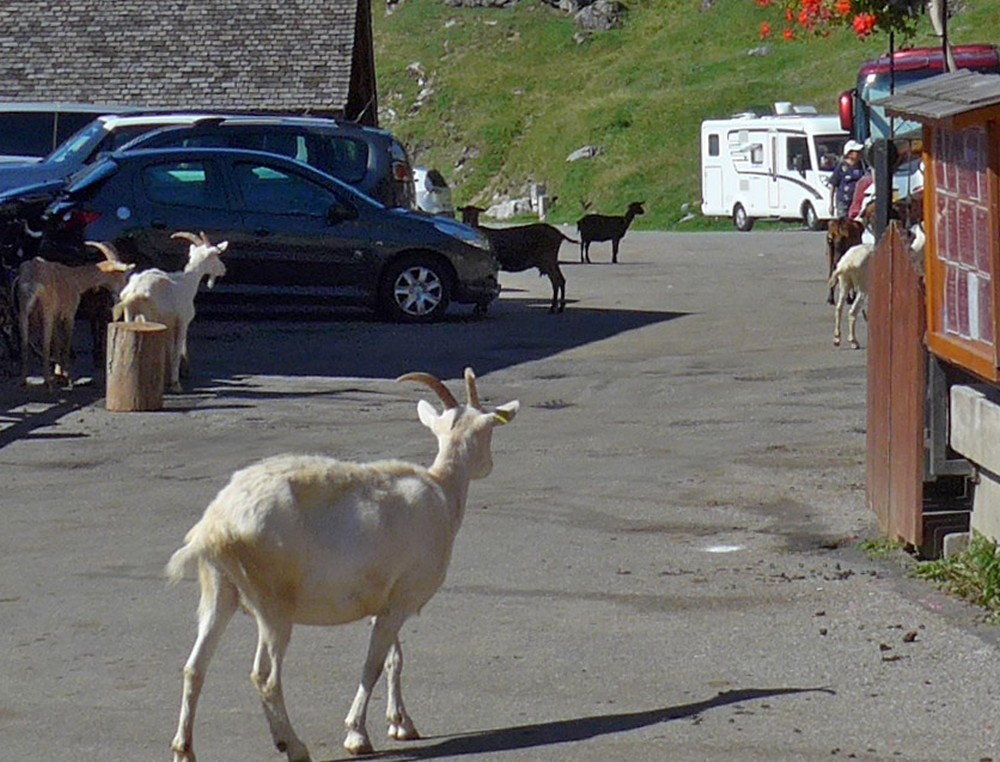 Beyond that was a steep section that I had read warnings of, which is why I’d reversed my route, once again, to have the steep bits on the descent. On the brakes nearly the whole time, I wished I had disc brakes. 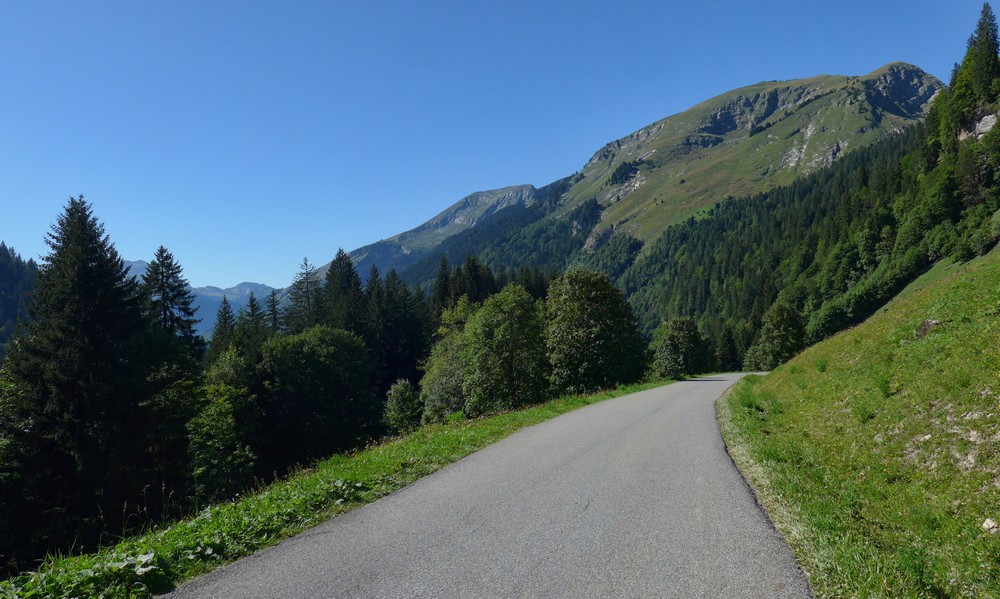 Eventually I came to my second lake of the day, and this one was spectacular, if a little touristy. 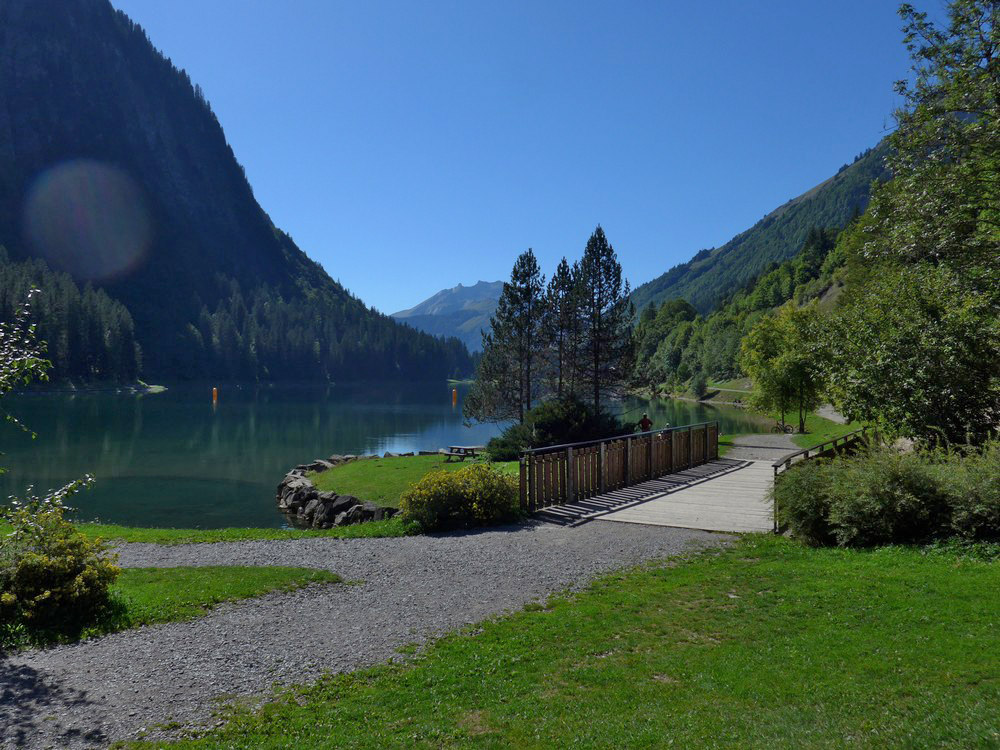 Shortly after that, I passed through the village of Montriond, just as the clock was chiming 4 o’clock, and then back to Morzine… 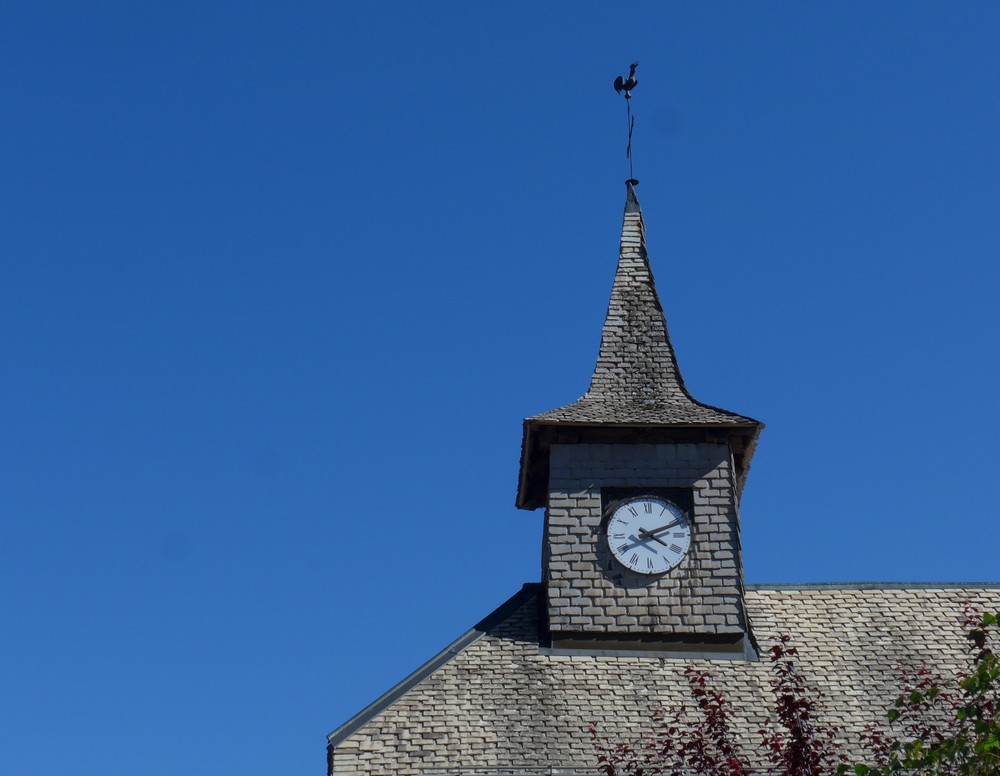 I felt nearly completely OK. The only thing was that I had become partially deaf on the descent due to blocked-up ears caused by the pressure changes, and no doubt exacerbated by my cold. Possibly – I’m no Ear, Nose and Throat surgeon!