Looking at the target times for this sportive, I saw that I would have to complete the 79.5 miles (128 km) in 4 hrs 29 mins in order to achieve a gold time; that equates to an average speed of more than 17.7 mph (28.5 km/h). That is really fast! I have never averaged that kind of speed over such a distance before.

The route ends with a steep climb up Carter’s Hill. From previous rides I know how long it takes me to climb that hill. So I calculated the average speed I would need to achieve by the time I reached the foot of the climb in order to finish the ride at the aforementioned 17.7 mph; this gave me a target to aim for during the ride. The answer was a shade over 18 mph! That was really going to take some doing.

The morning was cooler than it had recently been and I pondered wearing a long-sleeve jersey for the first time in months. In the end I didn’t. The weather was a mixture of sunshine and showers. I got quite wet twice on the ride. Although somewhat ‘friendlier’ than others I had competed in, this sportive was maybe not quite as slickly organised. In particular I found the start quite frustrating. Normally you can be on your way shortly after registration, but for this event they only let the riders loose after everyone had signed-in. Consequently there was a huge queue of hundreds of cyclists which meant standing in the cool morning air for over half an hour until I reached the front of the queue.

As is the norm we were released in batches of twenty or so at a time. With my 18 mph target firmly etched into my mind I was on a mission from the start. While others took it easy settling into the ride, I was off and gone. I overtook all of my batch and got on with the job in hand.

A few miles into the ride we were treated to the wonderful mile-long descent down Stumble Hill. Touching speeds of just under 40 mph, this helped me attain a healthy average of 19.8 mph by the five-mile mark. But, with every ‘down’ there must follow an ‘up’, and soon we were grinding up the 400 ft, mile-long climb to the top of Roughway Lane and The Hurst. (Looking at my data later, I saw that I climbed it three minutes quicker than I had done just a few days earlier! That shows the sort of extra effort I was making.) Inevitably my average took a hit and was now down to 16.4! Over the next 8 miles I built it up again to 18 mph, but already I was beginning to realise how difficult it was going to be to keep that up.

At about 16 miles two more ‘lumps’ in the route further conspired against my time. The second of these culminated in the very fast descent of Yalding Hill where I hit 45 mph, which is probably faster than I do it in my car! 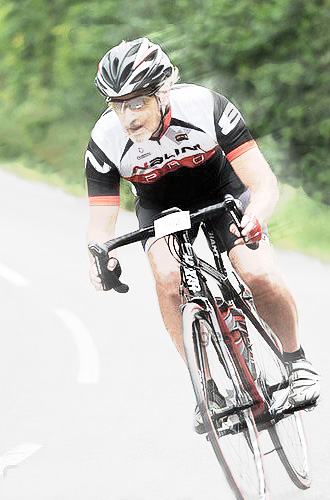 The next 30 miles were reasonably flat, as the route made its way into the Vale of Kent, through Staplehurst, Frittenden and Sissinghurst. I missed the first feed station because it was too crowded and I didn’t want to waste time there. Besides, I still had enough energy gels and juice. Despite a concerted effort, I could only manage to raise my average to 17.5 mph. I rode the majority of this sportive solo, although I was able to join a couple of trains at various points. I remember one group of riders going by and I tried to stay on the back of them but just couldn’t manage to hang on. By about 50 miles I realised that I was not going to be able to get my average up to the target 18 mph. After all, I had just done 30 miles of flat and there were more hills to come. That was when I resigned myself to Silver.

By the time I reached 70 miles, my average was 17 mph. Very respectable! Shortly after that I started to ease off a bit because I knew that Carter’s Hill was just eight miles up the road. I was psyching myself up for it; I even emptied-out one of my bidons which was still almost full of water – I didn’t want to cart that extra half a kilo up the hill! When it came to actually climbing it, I was thinking that it’s not actually that bad a hill; I could stay in the saddle for most of it. I mean it’s not as bad as the one at the end of the Mendips Sportive. Nevertheless, many of the other riders, probably most, were walking up it.

With Carter’s Hill done with, the event ended another mile further down the road, after one last-ditch sprint to the line. My final average was 16.2 mph. As I drove home I saw the rest of the field struggling back in dribs and drabs up that hill, this time from the comfort of my car seat. There were moments during the ride when I thought “Never again!” But now it’s over I’m already booking the next one!