I already knew it was likely to be cold and wet so I was prepared for it with warm gear, rain jacket, shoe covers, even mudguards! I used the Defy for the first time in months, now that I had fixed the front mech and changed the chain.

As I left the house there was fine rain in the air. A couple of miles later this had turned to heavy fine rain, if that makes any sense – the sort of rain that quickly gets you soaked. “Hmmm”, I thought, “this is going to be an uncomfortable ride”. Pretty soon I got wet and could hardly see through my shades.

When I arrived at Marden to meet the others, the rain had stopped. There were three other madmen out on this cold, wet and windy day. We set off at nine o’clock. Luckily the rain wasn’t a factor for the start of the journey. Six miles into the ride, Mark got a rear puncture, so we all stopped and helped. The tyre was particularly tricky to get off and it took three of us to get it back on over the rim! Fourteen minutes later we were on our way again.

Three miles later, Phil got a puncture. We all stopped and gathered round. Earlier, we had been discussing the problem of the valve core coming out of the valve stem when you unscrew the pump. Well, guess what happened? Yep, after Phil had inflated his tyre, as he was unscrewing the pump, the valve-core came out and let all the air out again. Damn! So he screwed it back in tightly and decided to pump it up with Mark’s CO² pump. That didn’t quite pump it up so Alan volunteered to pump it up with his frame pump, but as he was doing this something didn’t sound right – it seemed like the air was going in but then coming out again. When he realised that the tyre wasn’t getting pumped up properly Al started to investigate why, and that’s when the end of the pump came completely away from the body. Damn! It was unrepairable at the roadside. So it was back to Mark’s CO² pump, which he had now fitted a new cartridge to. This time it did a good job of pumping the tyre up. Unfortunately, in the process, Mark hurt his hand where the CO² cannister had frozen his skin! By now Alan had realised that his frame pump would no longer clip onto his bike because it was broken, so he tried to strap it to the crossbar using cable-ties, but one of them didn’t work. Damn! Nothing worked properly today. Luckily Phil had a spare one and Al used that to secure the pump to his frame. 23 minutes later we were on our way again.

Nine miles further on, yep, you guessed it, Alan got a puncture. Again we all stopped and gathered round. 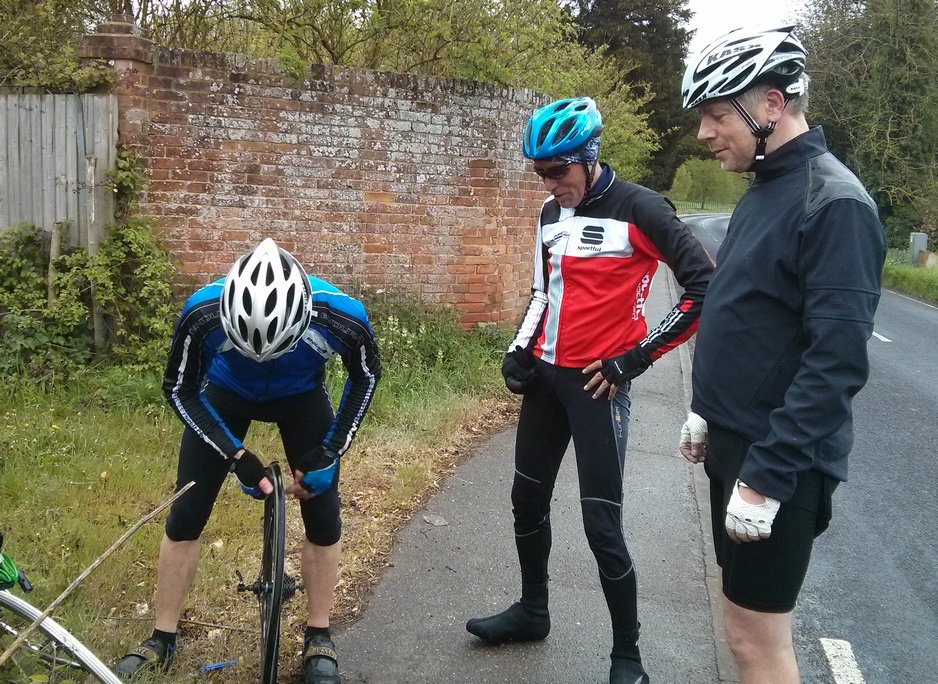 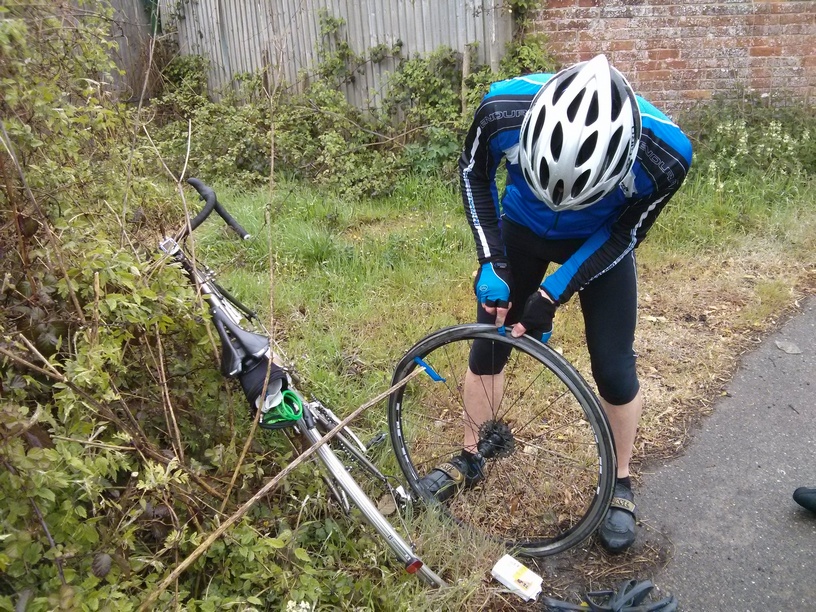 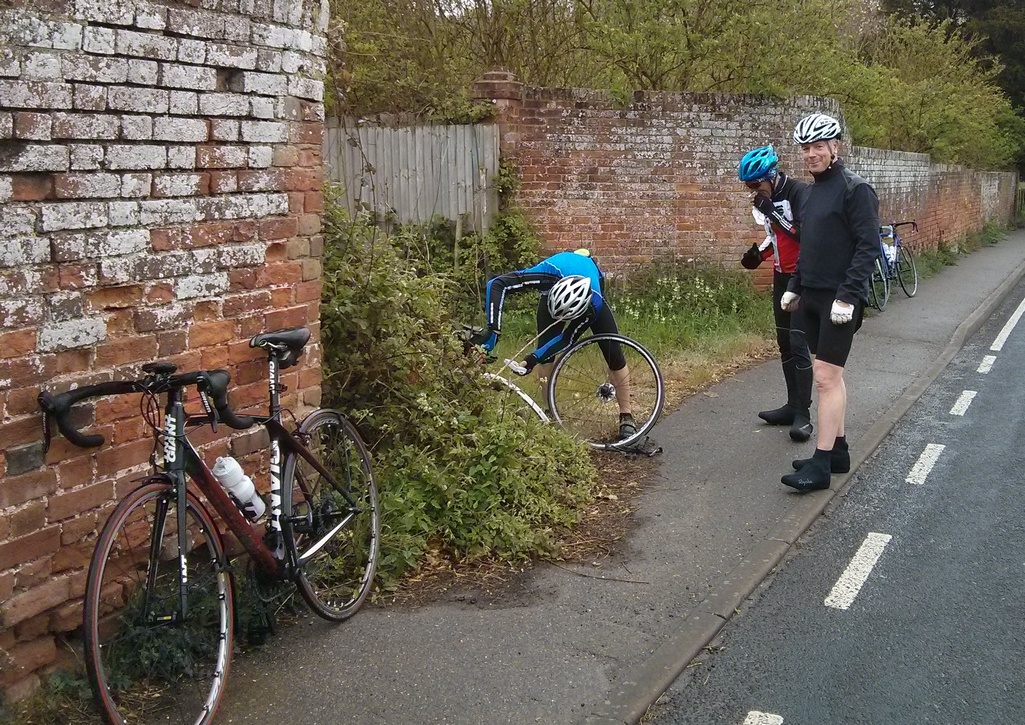 This time, I pumped the tyre up with my mini-pump. Twelve minutes this time and we were on our way again.

I was feeling like the odd-one-out, being the only rider to escape getting a puncture. By now, the ride had lasted over three hours and we still had another twelve miles to the café. And I had chosen today to completely miss breakfast so I was riding on an empty stomach! And now it started to rain again. Once again we were riding into the wind getting soaked by the rain. We were nearly at the café when, can you believe it, I punctured! Alan and Phil were way ahead so Mark had to chase after them to tell them I had a puncture. We were so close to the café that someone suggested I could walk the rest of the way – but I didn’t fancy that. Instead I fixed the puncture by the roadside in the rain, getting covered in grease and dirt. Again I pumped it up with my mini-pump – at least I was getting a good upper-body workout on this ride! We got going again for the remaining quarter of a mile to the food stop.

I don’t think we’ve ever arrived at the café so late! We couldn’t believe that we had each had a puncture. What were the chances of that sort of even distribution of luck? They seemed astronomical. Later I calculated the odds: Assuming that 4 punctures would be distributed randomly between all four of us then it’s a 20% chance that we would get one each, so not as weird as it might first appear. But I did make one prediction while we were standing in the café ready to order: “I suppose you realise that, statistically, we are not likely to get back without another puncture” – little did I know what I was saying!

While we sat eating, the rain started coming down heavier – great! Soon we were on our way again. At least now we had the wind behind us and were making good progress when, five miles into the return journey, I punctured again! By now we had pretty-well already used up all the spare inner tubes we had between us. Mark said he might have an old one in his bag. I took my wheel off (front one this time) and was busy getting covered in muck as I knelt down on the muddy verge in the rain and proceeded to remove the tyre. I was feeling pretty frustrated and sort of cursing under my breath (things like “I don’t believe it” and “this has gone beyond a joke now”) when I heard 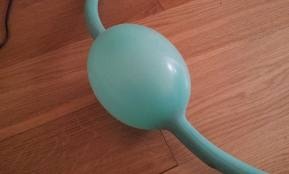 the other three burst in guffaws of laughter behind me. It turned out that the ‘old inner-tube’ that Mark had was a latex one and Phil had been testing it by putting air into it but hadn’t noticed that it had developed an aneurysm – the other two shouted at him to stop pumping. I turned round to see what the fuss was about. It looked like this. I said he could have made a sausage dog out of it like in those balloon tricks.

Eventually I had fitted the weird latex inner tube and once again pumped up using my mini-pump – my arms will probably ache tomorrow! Twelve minutes this time, and once again we were on our way, but Phil and I could not clip into our pedals properly because our cleats were caked in mud, so we stopped to sort that out and then caught up with the other two.

Eventually the rain eased as we rode on. We made really good progress with the wind at our tail. Phil peeled off after a few miles to take a more direct route home. We three continued on. Alan decided that he didn’t want to risk returning to Marden now that he had no working pump in case he got another puncture so we all agreed to ‘stay up on the ridge’. Mark peeled off after another ten miles or so, and Alan after a further five, leaving me with about four relatively flat miles to go to home.

We’re not likely to forget that ride in a hurry!
[wysija_form id=”1″]