My ability to focus leading up to this sportive was compromised somewhat when the clutch failed on my car the previous evening, just as I was arriving in Bristol to stay with friends overnight before the event. I ended up stranded on an industrial estate late on Saturday night and waited over two hours for the recovery service to haul my car to my friend’s place. Luckily I was able to borrow their car to get to the event the next day. I ended up getting about 4.5 hours sleep.

Next morning I got to the event at 7:40. The weather was fairly mild, mainly overcast, and I could see that it was raining in the distance over the hills. Also it was windy! I took my helmet to the registration area to get the timing chip stuck to it and get my competitor number which had to be attached to the bike. I put my gear on, stuffed my pockets full of food and gels and headed to the start line. To avoid traffic congestion they only allow the riders to start in batches of about 20 at a time. We were given a quick lecture about route signs, safety and suchlike; then we were let loose.

In order to achieve gold standard I needed to average 15.5 mph over the 91-mile ride, but to be on the safe side I had a figure of 16 mph in mind. The elevation image showed that there were three main climbs; I made a mental note that they were at 20, 30 and 62 miles into the journey. There was also a 25-mile flat section through the ‘Somerset Levels’. This is where I hoped I could make up time lost in the hills.

I averaged 15.7 mph over the first 20 miles. The first climb, Burrington Combe, is a gorge through the limestone of the North side of the Mendips. It climbs 700 ft in 2.5 miles and was not difficult, just a bit of a slog. But it still ate into my average and by the time I had reached the top it had dropped to 14.2 mph. It had started raining midway up the hill and continued for the next 8 miles – I got pretty soaked, although my feet remained dry. The rain really cools your legs down. My right knee began to ache quite a lot as it got cold – I’ve definitely got something wrong with that knee and I need to get it sorted. I was aware that the next hill was coming up at the 30-mile mark and as I approached it the rain had stopped and the sun was coming out so I was trying to dry my knee and get it warmed up again before the climb. By now I had recovered my average to 15 mph again. As usual I scoffed a couple of jelly babies just before the hill. 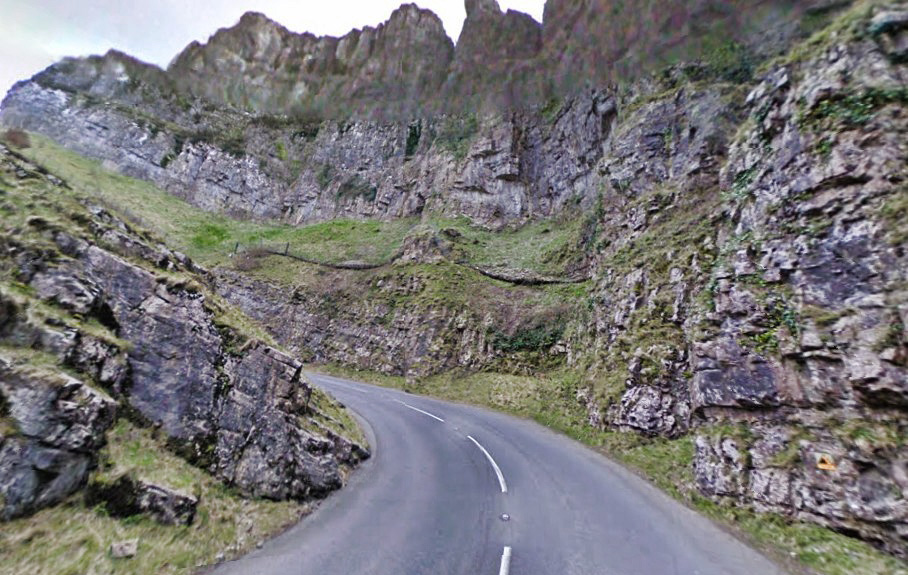 This one was Cheddar Gorge and apart from a really steep but very short bit on one of the bends (shown above) it was a piece of cake really. My knee had stopped aching by this point. The climb starts off fairly steep in the rocky bit, 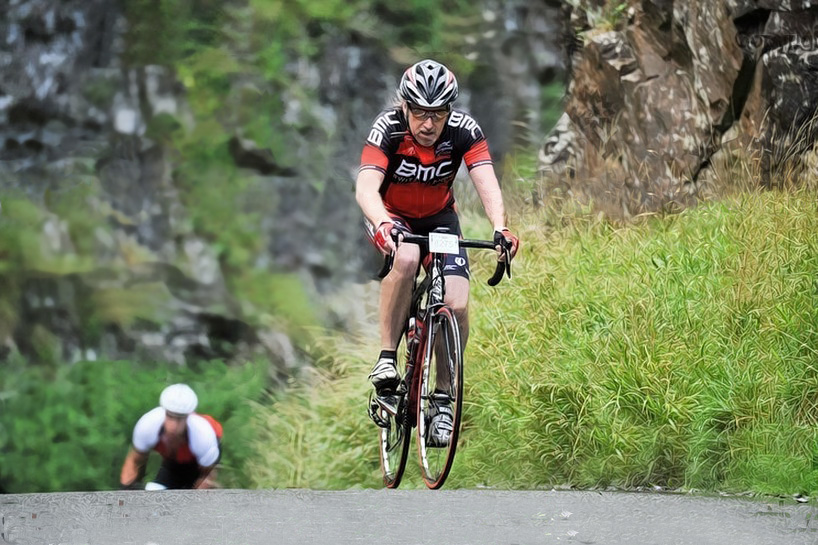 but the gradient progressively eases over the next 4 miles of climbing. And my average dropped back down to 14.4! But I now had that flat bit coming up – an opportunity to make good. A glorious 800 ft descent over 2 miles plunged us down into the Somerset Levels. Although flat, the wind was directly in our face now as I rode with a group of 5 others keeping a really decent pace of about 18 mph, enabling me to once again recover my average to 15.7. But I knew it wasn’t enough to keep gold in my sights; I needed a much higher average than that to act as a buffer for all the slow climbing that was yet to come; so, reluctantly – but realistically, I changed my target to Silver, but it still took a concerted effort to keep on track for that. I stopped at the 53-mile feed station and topped up my juice, ate a piece of flapjack and grabbed a couple of fig rolls. I was stationary for 4 minutes. By the way, 53 miles was the furthest I had ever ridden without stopping.

I had forgotten my mental note of when the next hill was. I had it in mind that it was 70 or 80 something miles, so at 62 miles I wasn’t prepared, jelly-baby-wise, for Ebbor Lane and Deerleap, a climb of nearly 800 feet in just over a couple of miles, with a 17% section halfway up! The far-away views to the South were stunning.

It was a long slog, but not too bad. Especially as it was the last of the big climbs of the day (or so I thought!). There were less than 30 miles to go now and, riding on my own, I concentrated on keeping the pace as high as I could manage. 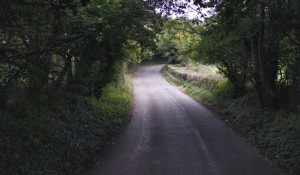 I don’t think many riders were ready for Woollard Lane at 85 miles. I certainly wasn’t.  After all, it’s just a small blip on the right of the elevation image. We started to climb and as I looked up ahead I saw the gradient of the road increasing as it turned the bend ahead. “That looks steep” I said to another rider, or to anyone who was listening; I was really just saying it to myself. But around that bend there was worse to come. The road ramped up to what felt like 20%, but in reality was probably ‘only’ 17%. (Addendum 26/8/13: I recently measured this on an OS 1:25000 map and the steep bit was well over 19%, so my original estimate was close). 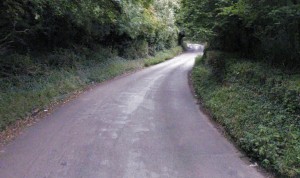 There was no choice but to stand on the pedals. My legs were screaming. They felt like they were literally going to seize up with cramp. My pace slowed to a crawl as I ground the pedals round. Others were walking at this stage. And I very nearly joined them. I was seriously thinking of ending the pain by getting off, but then I saw the gradient easing up ahead just around another bend, so I forced myself onwards and eventually made it to the top. That was the toughest thing I’ve ever had to do on a bike. I think that Woollard Lane, on any other day, would just be an interesting climb, but after 85 miles in the saddle it took on a whole new meaning. That was evil of the event organisers to put that climb in the route so near the end! Mercifully the next 5 miles to the finish were nearly all downhill. I finished the ride at an average of 15.2 mph, enough for a Silver.

After the ride I didn’t feel too bad. Certainly the bits that ached the most were my knees. I had my protein recovery milkshake and did some stretches before attempting the drive back.

The thing I got terribly wrong on this ride was hydration. When I got to that feed station at 53 miles I only topped up one of my bottles because the other one was still full up. That meant that I had consumed just one bidon over 53 miles or 3.5 hours of riding. That is way too low. It should be one bidon per hour. I think the rainy weather at the start of the ride wasn’t making me feel thirsty enough to keep drinking. Even though I didn’t get much of a headache I did later get one of the other extremely painful symptoms of dehydration.

So I didn’t get Gold. I am still really pleased with what I achieved. To put it in perspective, almost a year ago to the day I did this 15-mile dead flat ride in an hour, at 15.2 mph and I was so pleased at the time. Now, a year later, I have achieved the same average over a much more tortuous 91-mile route! That’s progress! 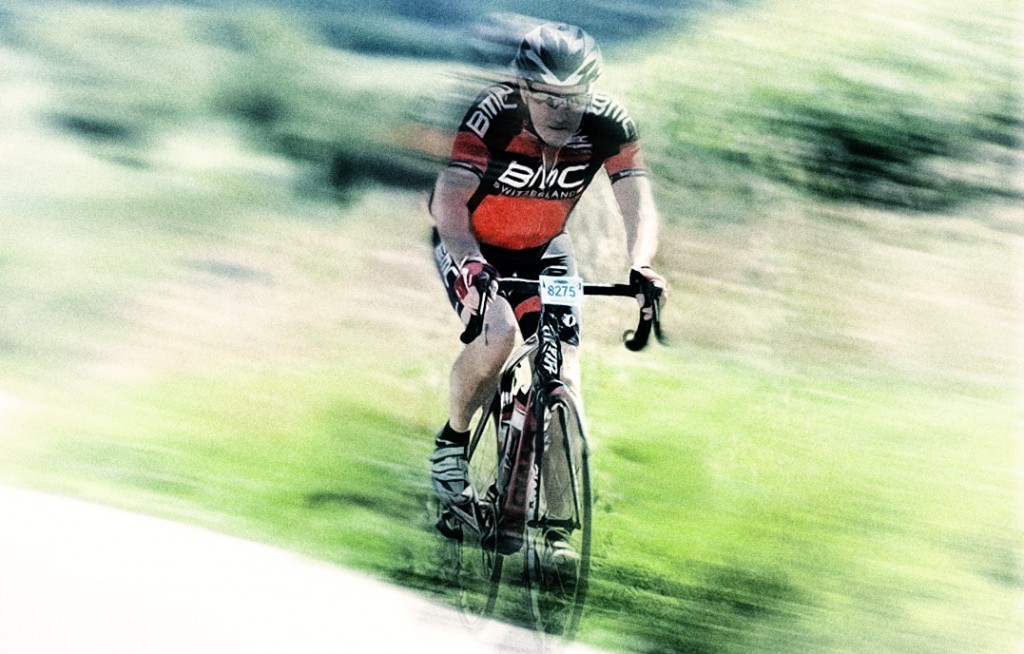