The route for today’s ride was up a road to the west of Guillaumes, as opposed to the road to Valberg, on the east. I had already seen snow by the roadside and the temperature looked like it would be in mid to high single figures ºC. So I wore merino base layer, roubaix top (should have worn my winter jacket), skull cap, woolly snood, winter gloves, longs, Castelli Toe Thingys over my shoes, and DeFeet Woolie Boolie socks. I took my rain jacket for wind protection on descent.

It had been a cloudless sunny morning,

… but by the time I set off, high clouds started obscuring a hazy sun. I rode to the north end of the village of Guillaumes, over the bridge and straight into the climb to Sauze. It was a series of ‘lacets’ (literally ‘laces’), or switchbacks that swung back and forth from one end of the village to the other as they climbed the mountain.

Time 13:11 This report coming from just up the road out of Sauze. Instead of descending back to base now, I’m riding a bit higher towards Les Moulins. For most of the climb there has been hardly any wind, so it’s been very difficult to work out how cold it is. Certainly my feet and hands and everything else is totally warm enough. That’s because I’m going slowly and with the effort to keep me warm. There’s snow by the side of the road and some water trickling across the road – I’m just hoping that none of it is ice (don’t think it is). That would be more problematical on the descent.

I started off with the sun shining. It’s never really gone in completely, but it’s become a very watery sun. 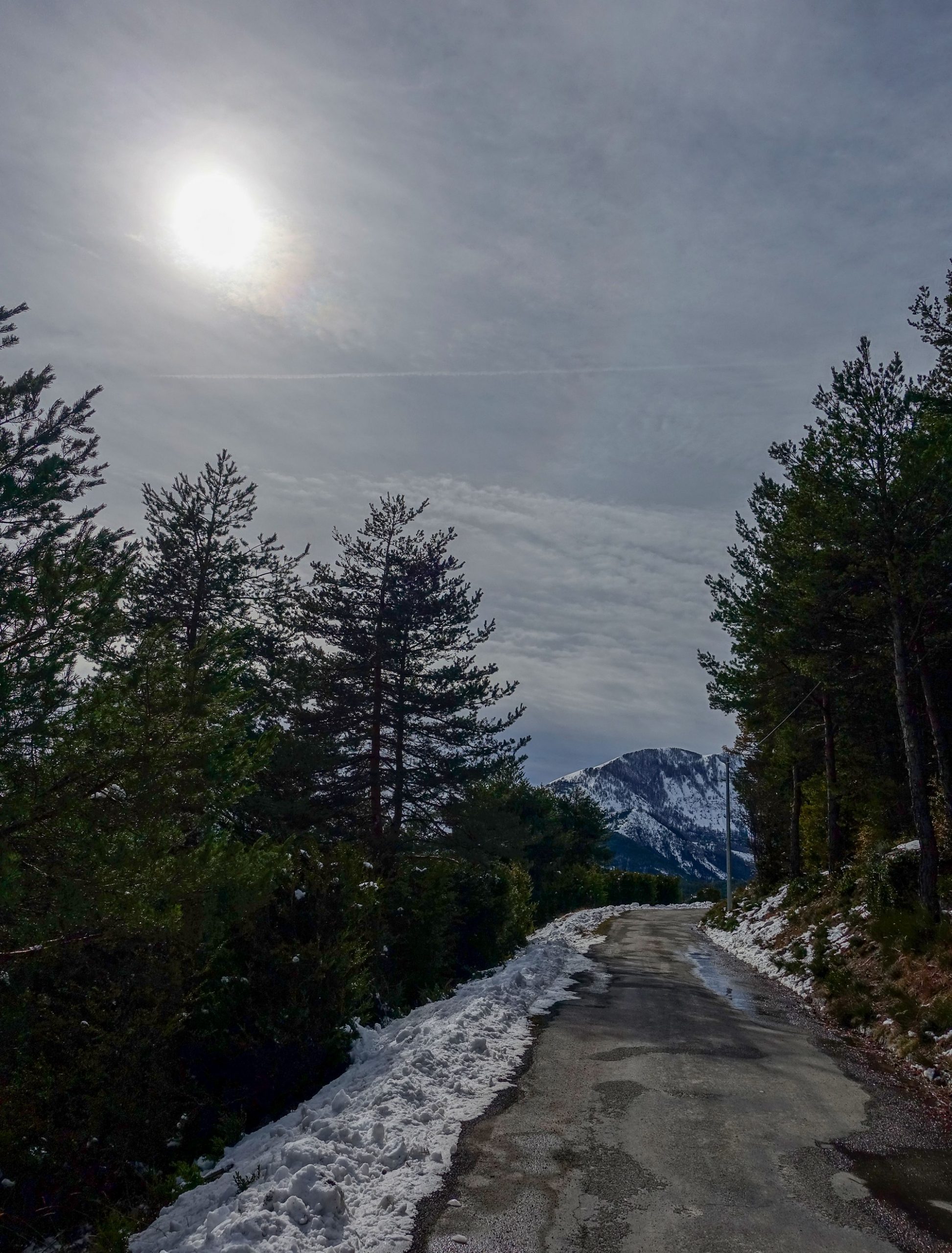 Where I’m standing now I can see right across the valley to the road I climbed last October to the top of the Valberg.

I’ve just been to Sauze and seen that the roads there are still sludgy with snow. 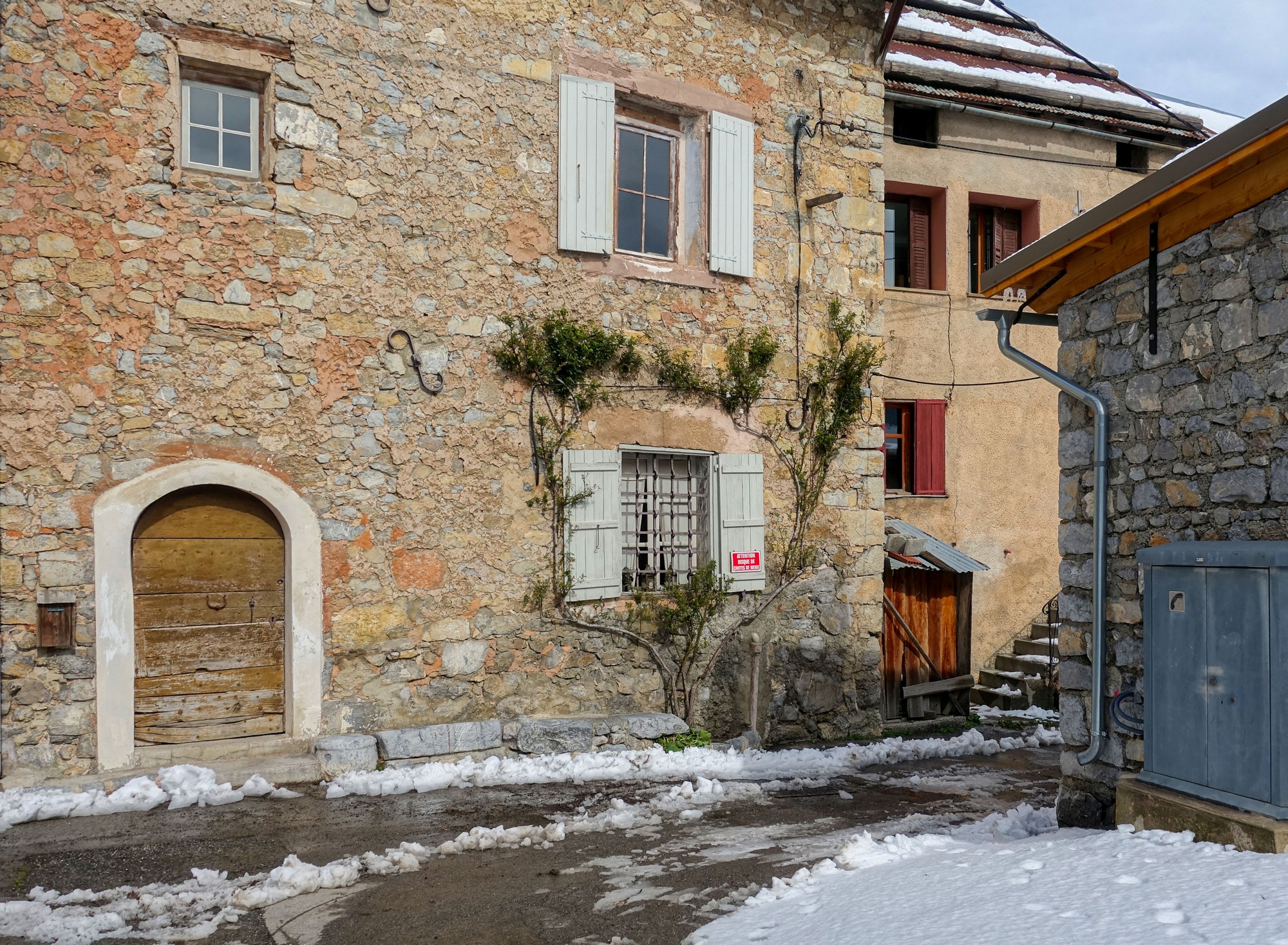 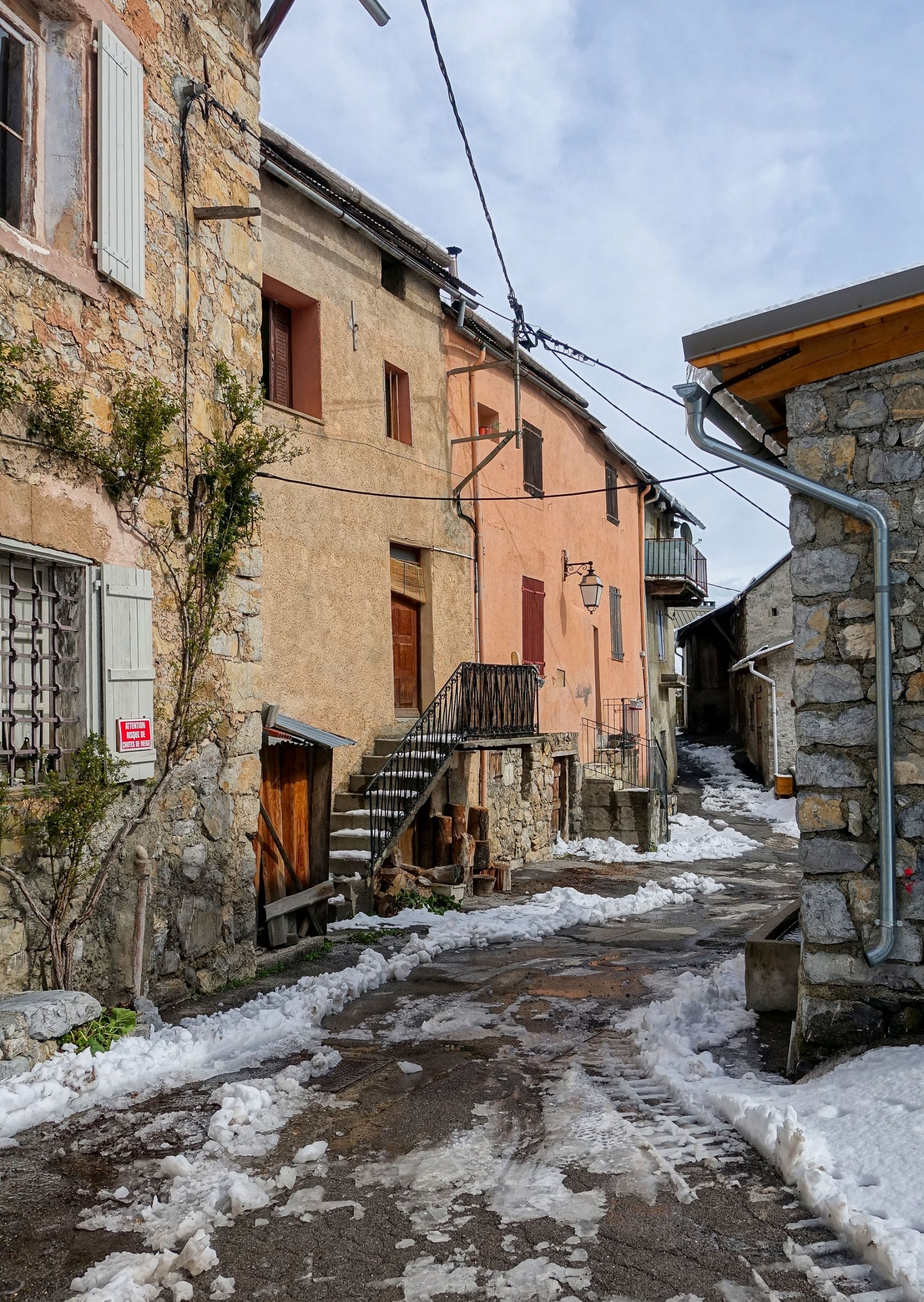 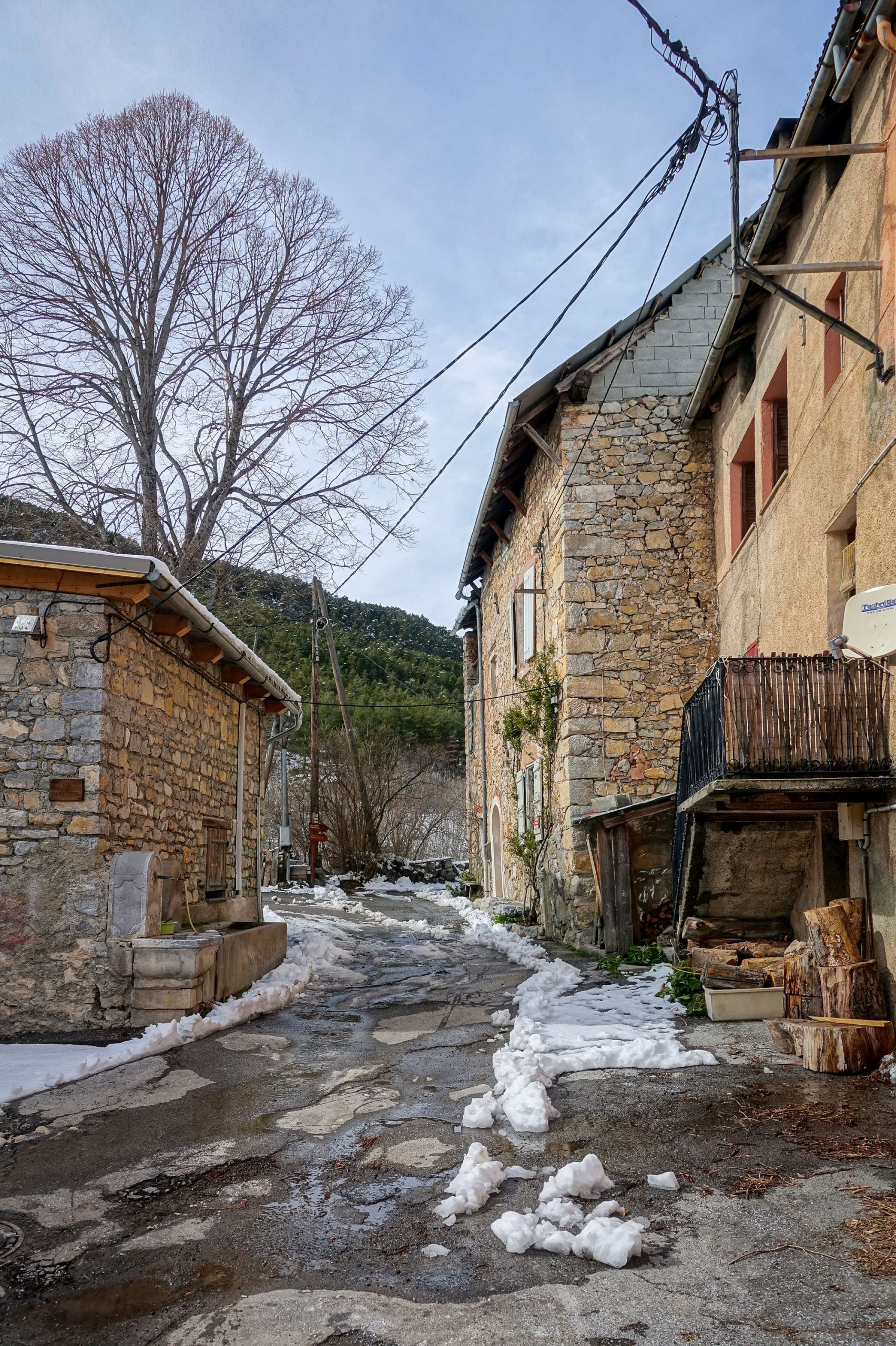 So that means that the road I’ve been on has obviously been cleared, because it’s been completely snowless really, on the tarmac, compared to in the village. Standing here now I am feeling the wind start to blow and it must be just a few degrees above zero, if that. The couple of times that I’ve stopped it has been remarkably peaceful. There’s hardly another sound around – maybe just the odd bird chirping way off in the distance in the forest.I’ve got my rain jacket on now as wind protection, but I still think it’s going to be a very very cold descent, so I might have to go slower than normal. 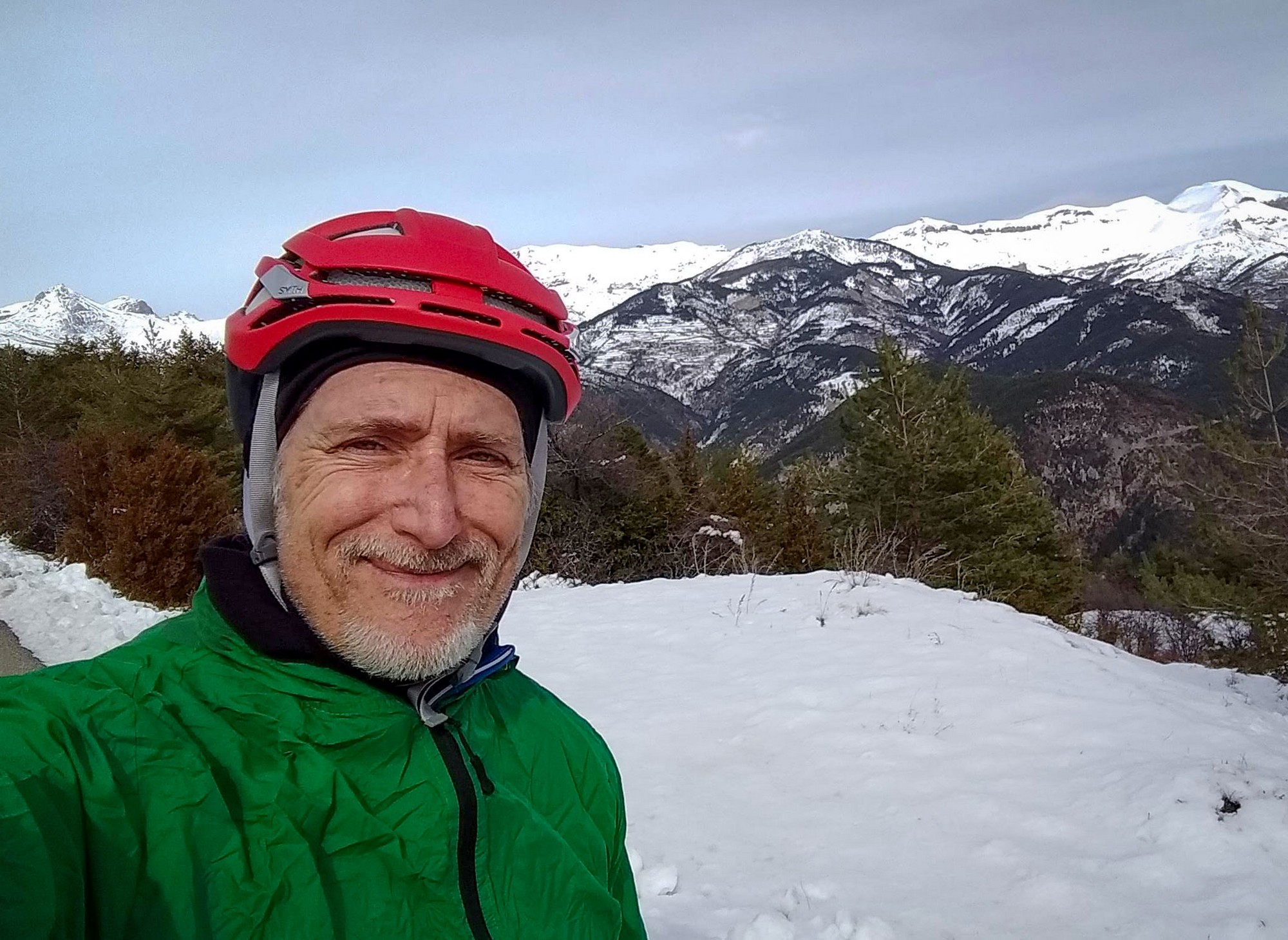 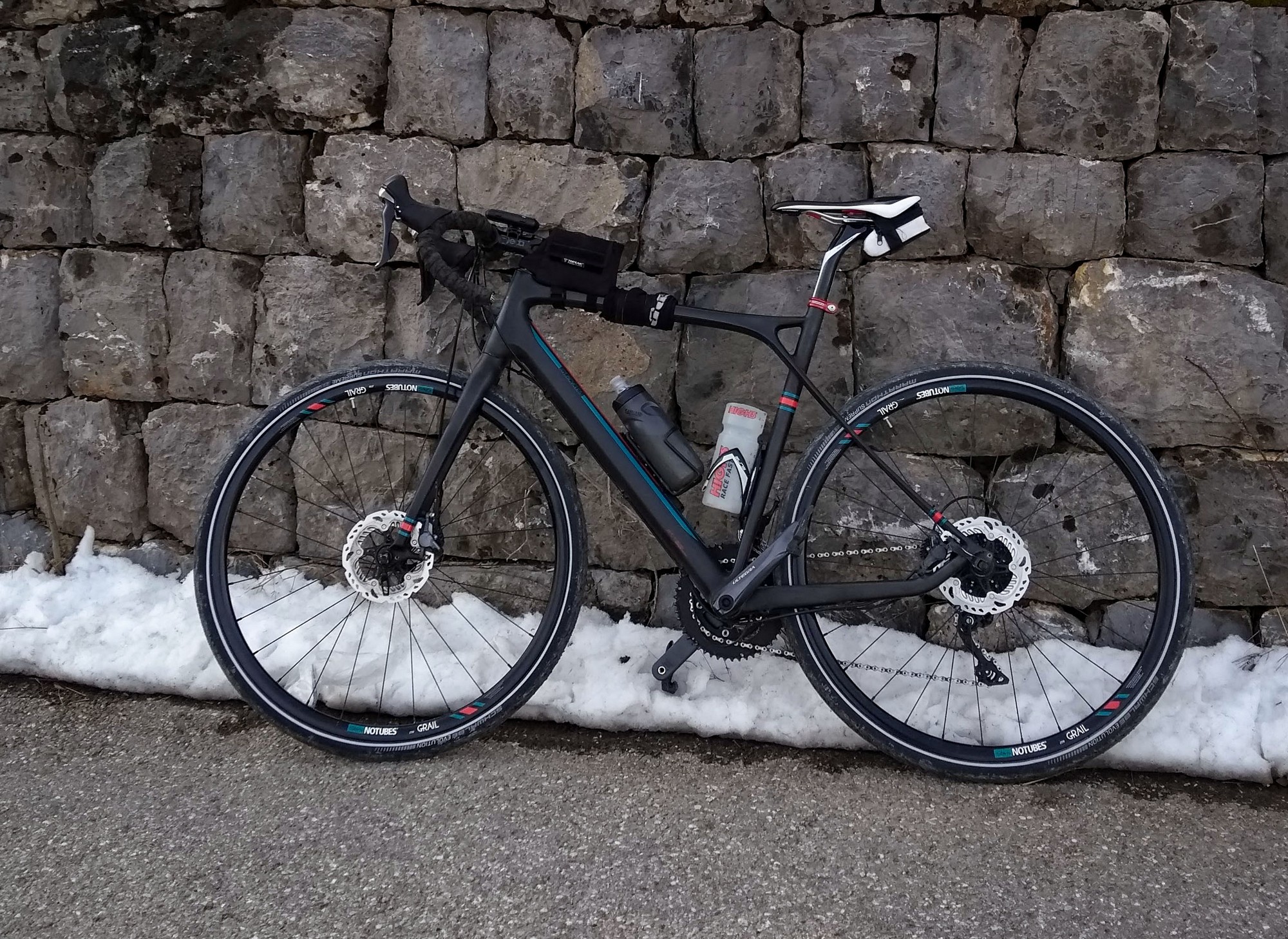 Anyway the descent will come later. For now I’m on my way a bit higher towards Les Moulins. 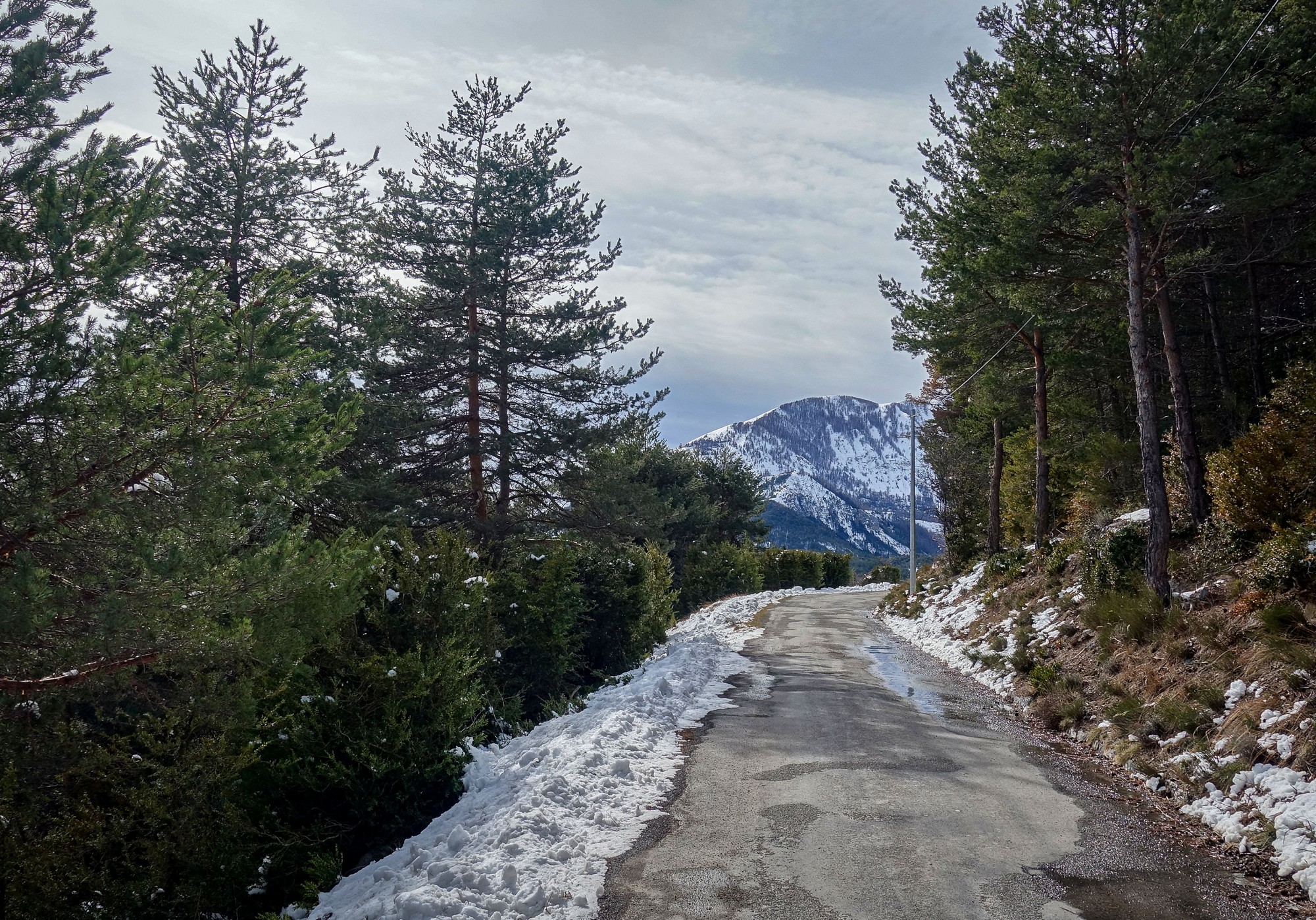 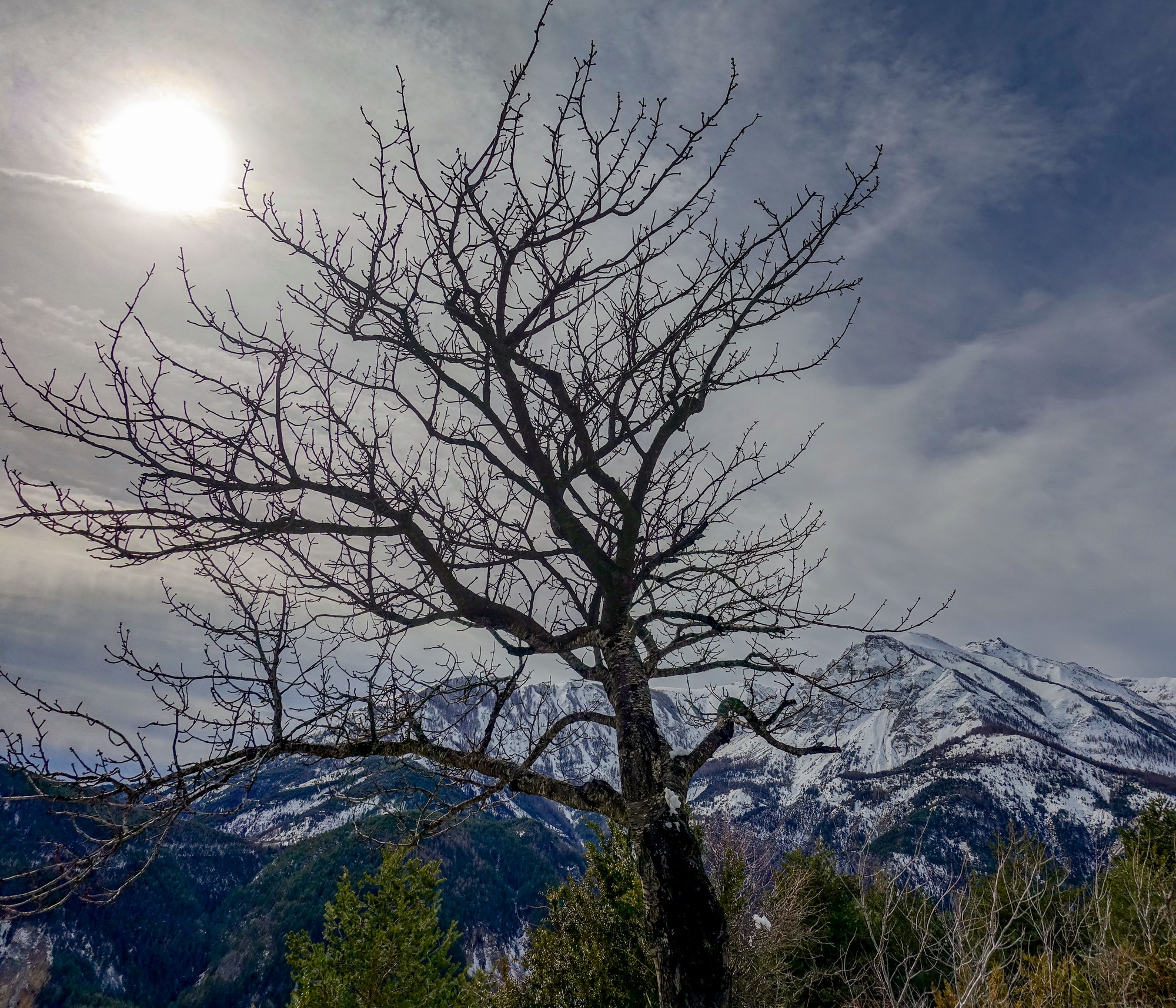 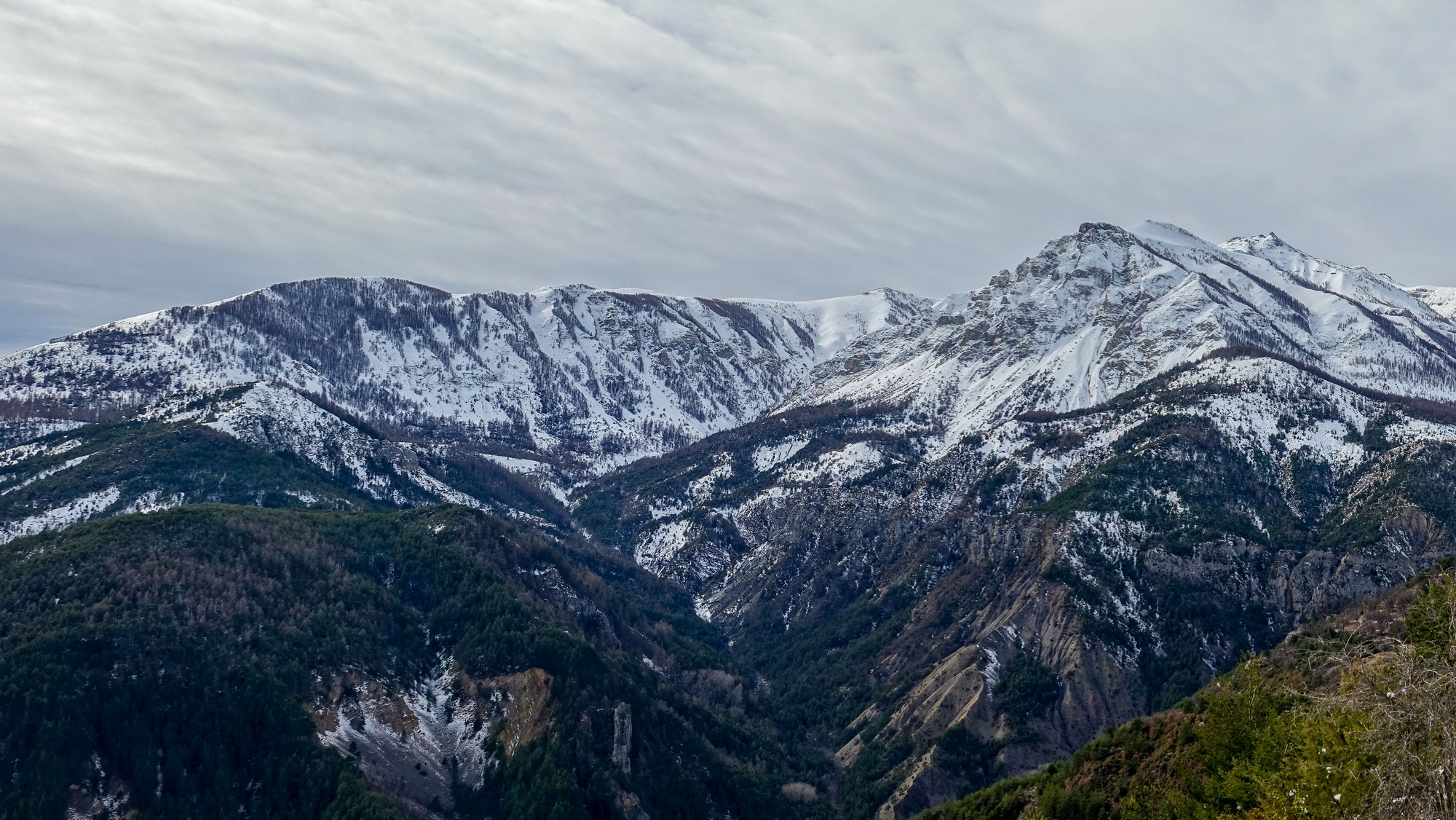 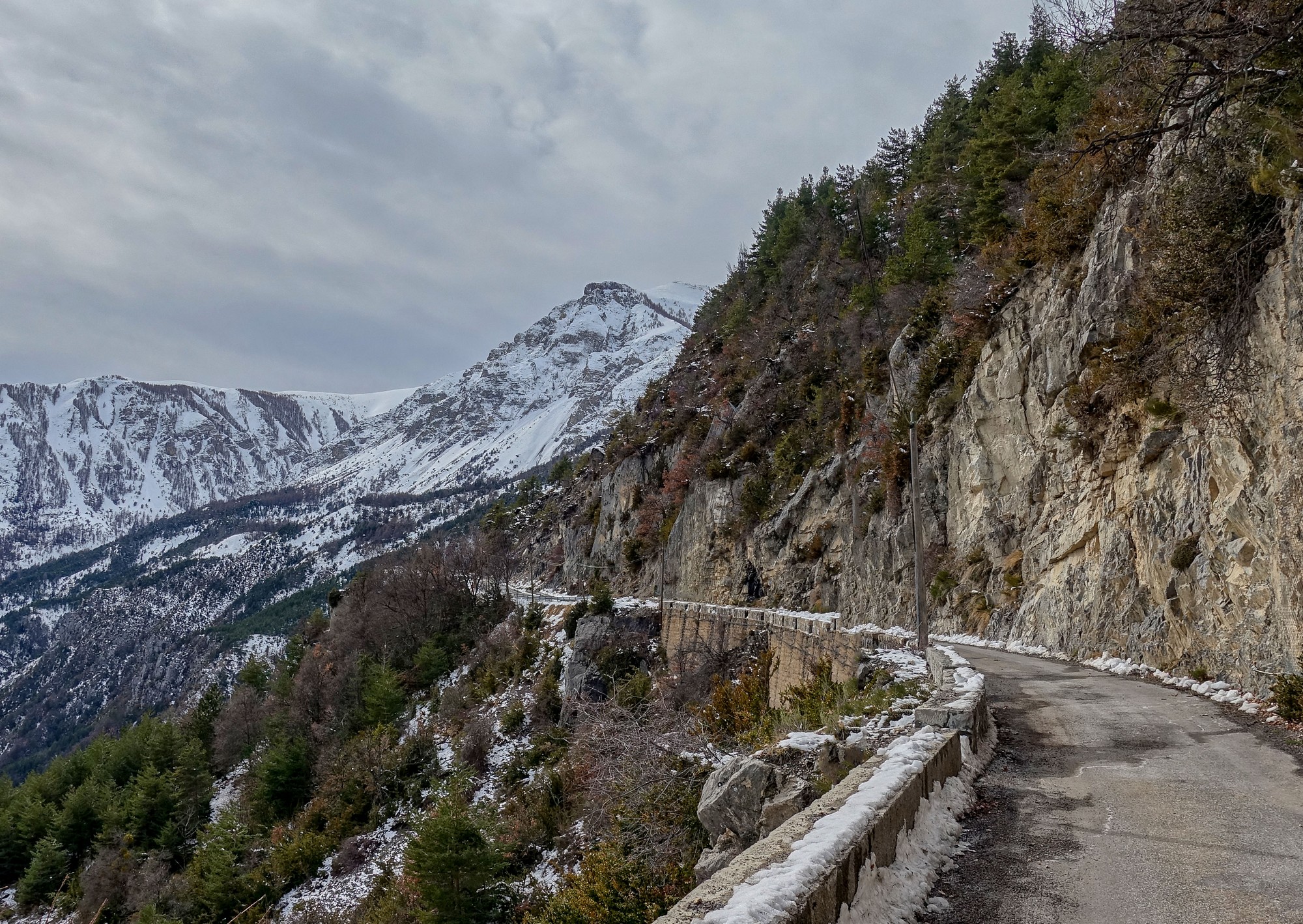 Report from after the ride: I carried on up that extra bit of road towards Les Moulins. It was climbing gradually, but very gradually – pretty flat really. I thought I’d go as far as I could before it started going down. I didn’t really want to do anymore climbing. On that section I started to feel cold probably because I was going faster and it was less of an effort. The only vehicle that went past me was the postman who I had seen in Sauze as well. In fact he was ages in Les Moulins before he passed me on the return, so he must have been having a break or something.

This road was different and just stuck to the edge of the the mountain without  really going up or down. Eventually came to a point where I could see Les Moulins.

It was just a small hamlet at the end of that road, with a tiny church.

I could see that the road went down quite a way so I thought I’d turn around that point and make my way back. It was quite ok on the flattish bit although I did start getting cold because of my extra speed. 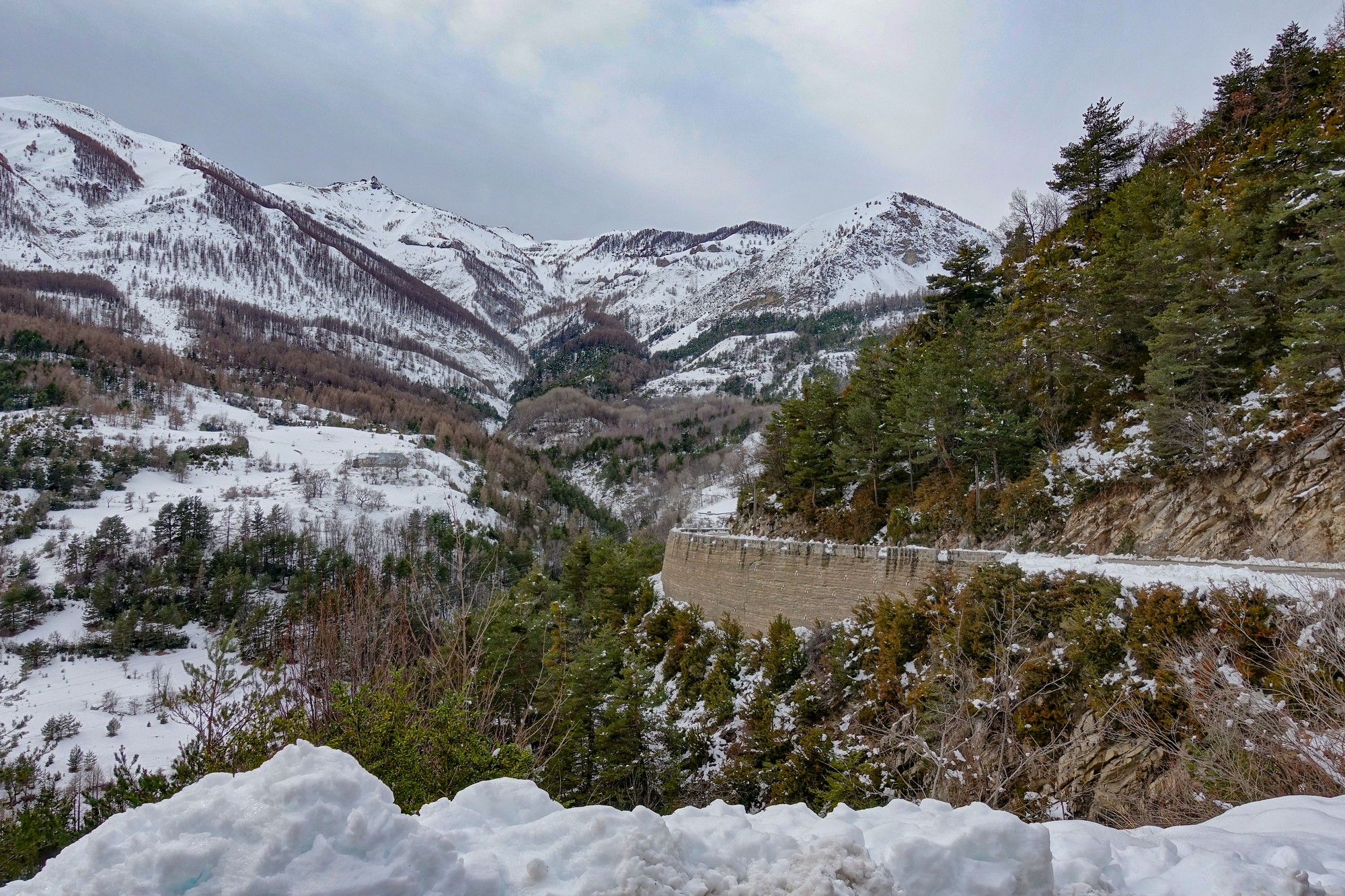 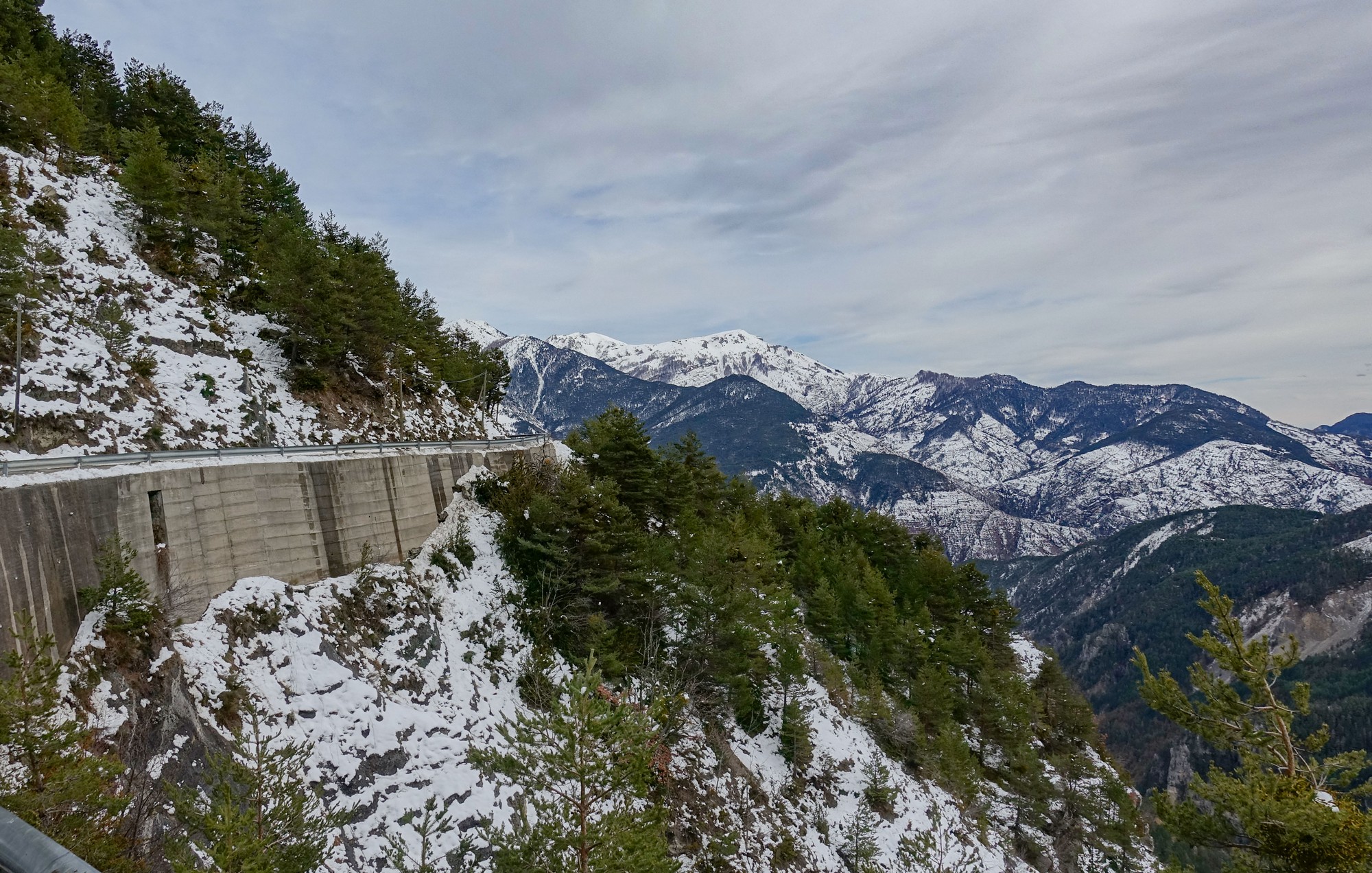 Then when it came to the main decent it was very cold. 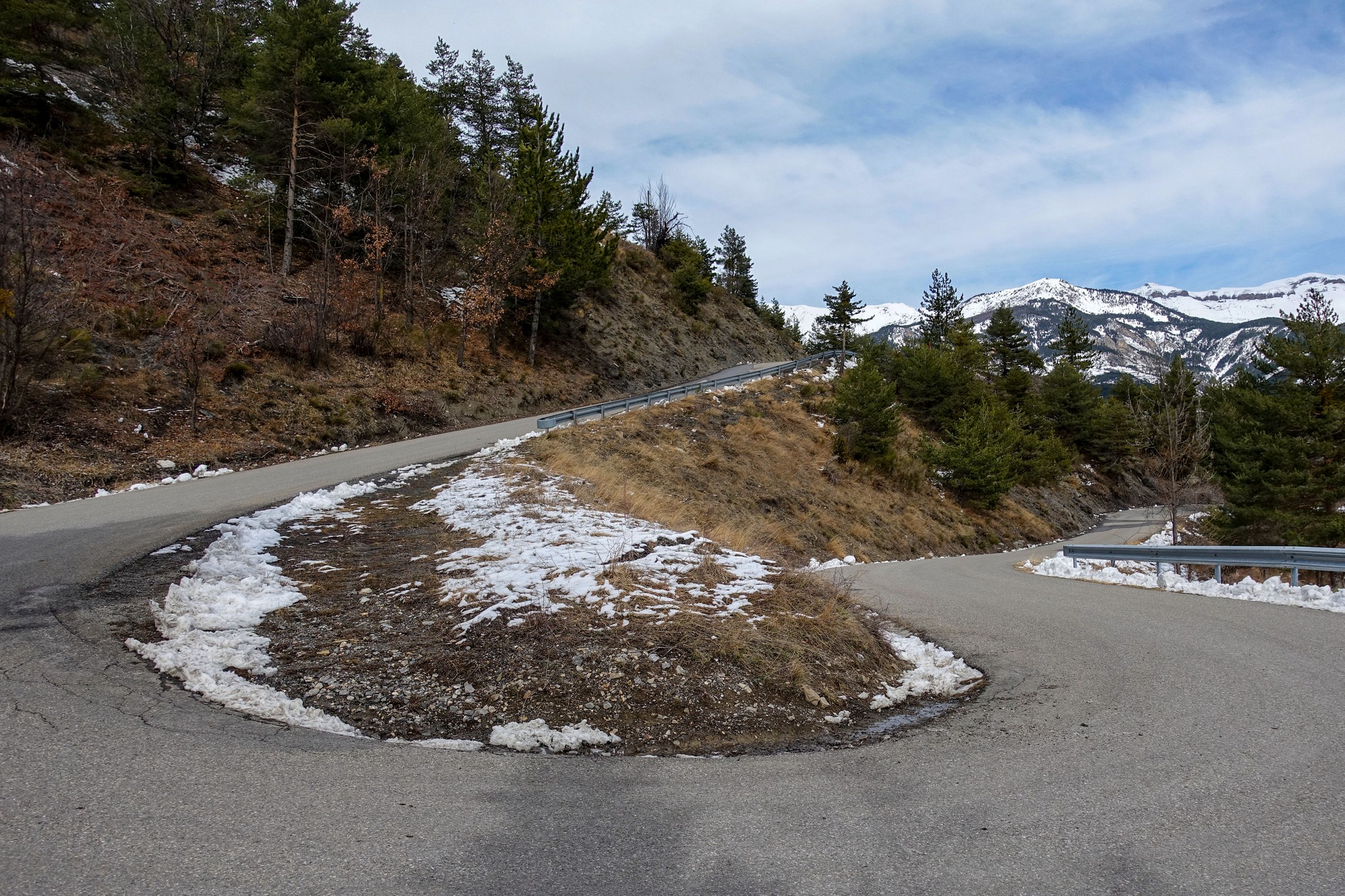 I pulled my snood up over my nose and mouth. In fact the main things that were cold were my hands, and they were getting to the point where I couldn’t even feel them. My average on the descent was nearly 20mph with 30mph being the max. That explains why my hands were so cold. My right toes were getting cold as well but when I got back I found out my sock was wet, probably from when I’d stood in some snow earlier and it had gone through the ventilation hole in my shoe. So that would explain my feet, even though I had the castelli toe thingy’s on. My head was cold as well, but not really my face – the wrap-around goggles did a good job to protect against the wind and the snood over my mouth and nose did a good job as well.

That descent would be an absolute pleasure on a hot day, but I was glad to be back to the warmth of the van. The sun had always been easily visible through the high clouds, but when I got back it actually came out properly for a while, which was mildly annoying but then again it was a good way of heating up the van.

My bike is now covered in muck. 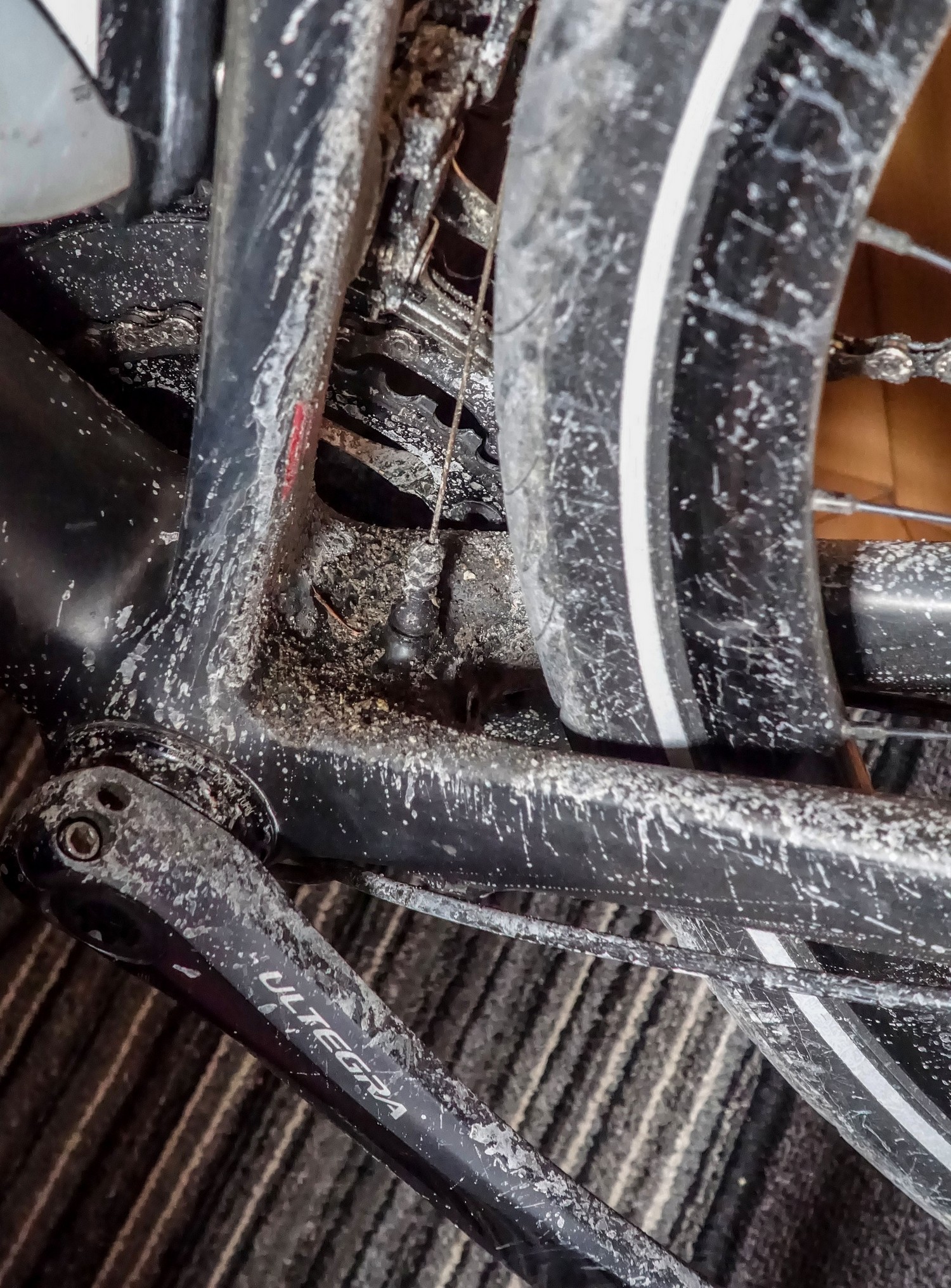 The snow made for a bit of interest, but give me a day in the mid 30ºC’s any day of the week! 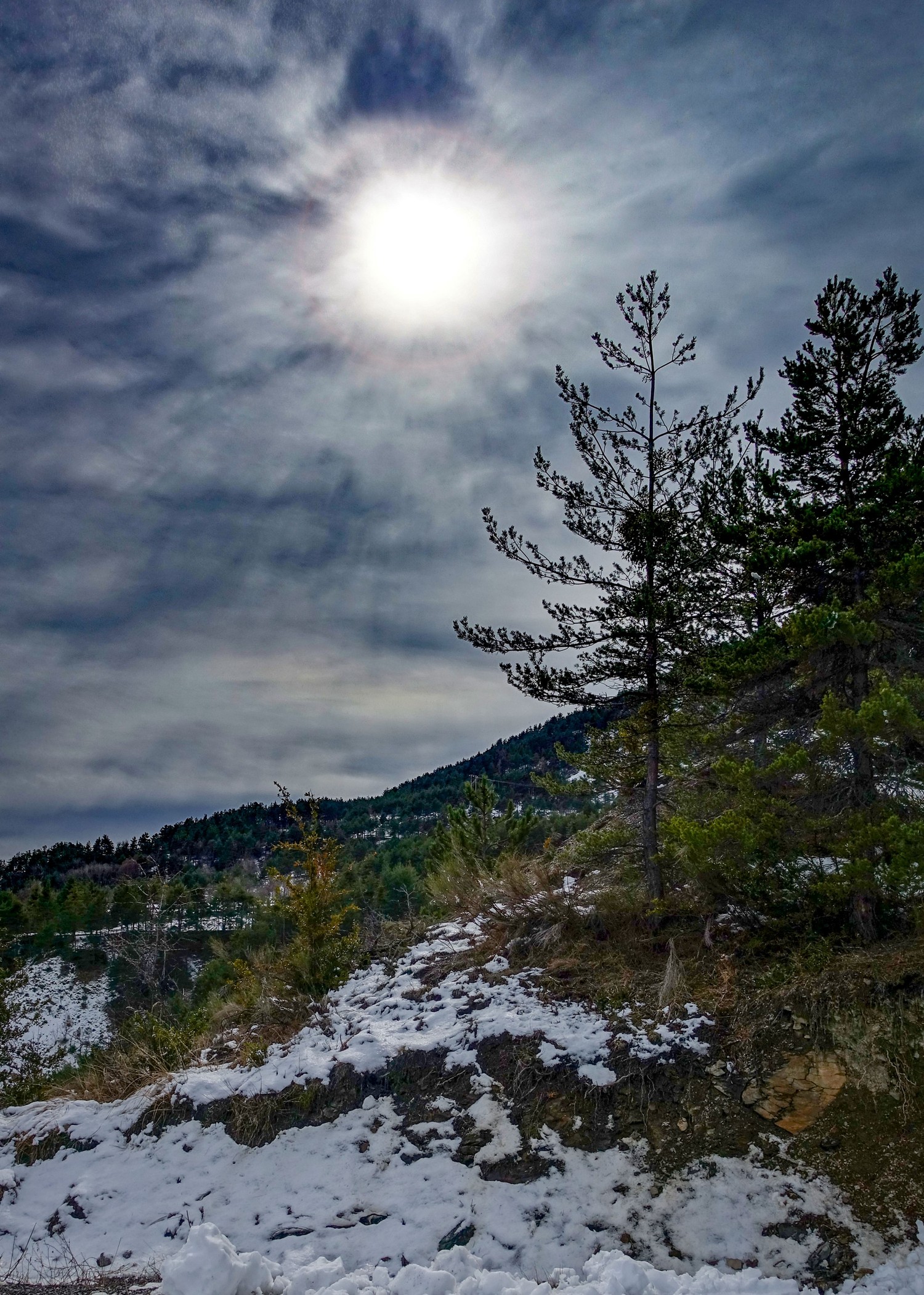 Click on any image to enlarge and see slidehow