With the forecast predicting a strong gusty WNW breezy, but otherwise sunny day, I planned a route into the wind, so that it would be a tailwind on the return. I think I was concentrating so much on the wind that I ignored the elevation profile of the route. Initially I had opted for wearing shorts, but changed my mind at the last minute when I detected a nip in the air. I set off at 12:55. The rest of the day’s happenings were recorded at various points along the ride

14:00 First report coming at 8 miles just outside Draguinan. The first 3 miles of this ride were uphill, immediately from La Motte, the village where I’m staying. The first mile was particularly tough with short sections of 20%. Luckily, on that section the wind seemed to be behind me for some reason, then as the climb came to the end and I came to the more exposed top of the hill, the wind kicked-in and was quite chilling. That’s when I decided that I’d made the right choice to wear longs and not shorts.

I’d designed the route to not bypass Draguinan, but to go through the city centre to see what it was like. All I ended up doing was riding down some seedy back streets and somehow missing the true heart of the city. So there’s not many photos so far. It’s a beautiful sunny day. I’m outside of Draguinan in an area consisting primarily of vineyards, but I’m a bit worried at the moment because it looks like there’s a whole range of hills ahead of me and with the sun on me I’m now thinking that if I had a pair of shorts they would be better because, although there’s still a nip in the air, my legs feel too warm. 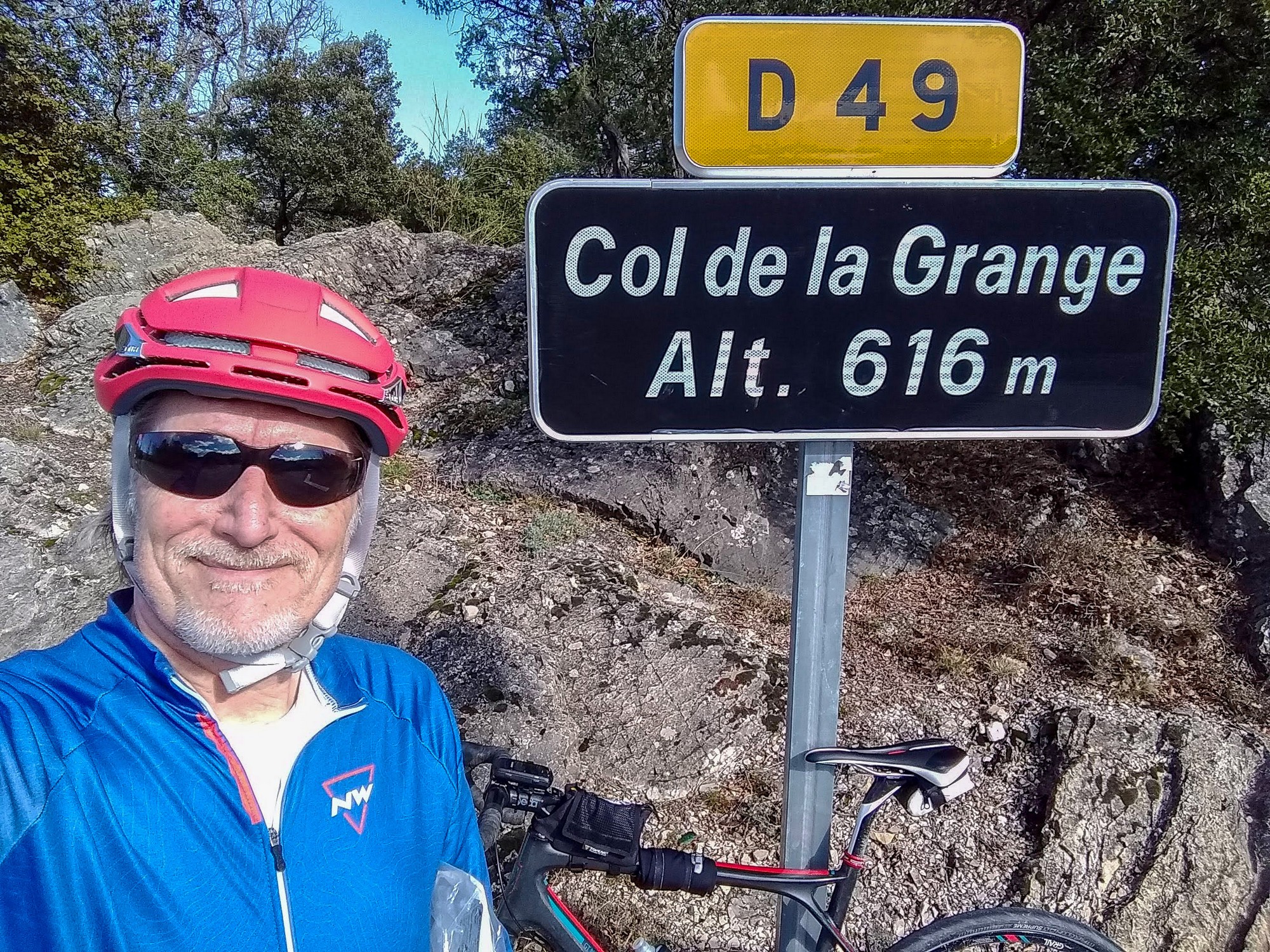 Since the last report, those hills obviously needed to be traversed but the road didn’t follow any convenient river path; it just went straight over the top. The climb just never seemed to end. Coming up through the forests, every bend looked exactly the same. Then at last, I reached a point where I could see a piece of armco higher up ahead with just blue sky behind it and I thought surely that must be the end. And then when I got round the bend, I saw what looked like a col sign ahead. ‘Hooray, at last’. I had really wanted to stop at various points during that climb, but the longer it went on, the more committed I became to just keep pedaling until I reached the top.

This final report is coming from back at base, mainly because I just didn’t have time to stop and do a report, because I ran out of daylight. After that stop at the Col de la Grange, the road descended but there was a fierce wind that slowed me down to about 6 miles an hour as I tried to just stay on the bike.

There’s probably some other bits in the middle I’ve forgotten now, due to the frantic latter part of today’s events. I know that there was much more climbing to be done. The village of Tourtour, I think it was (it was), was really lovely and I got some photos. 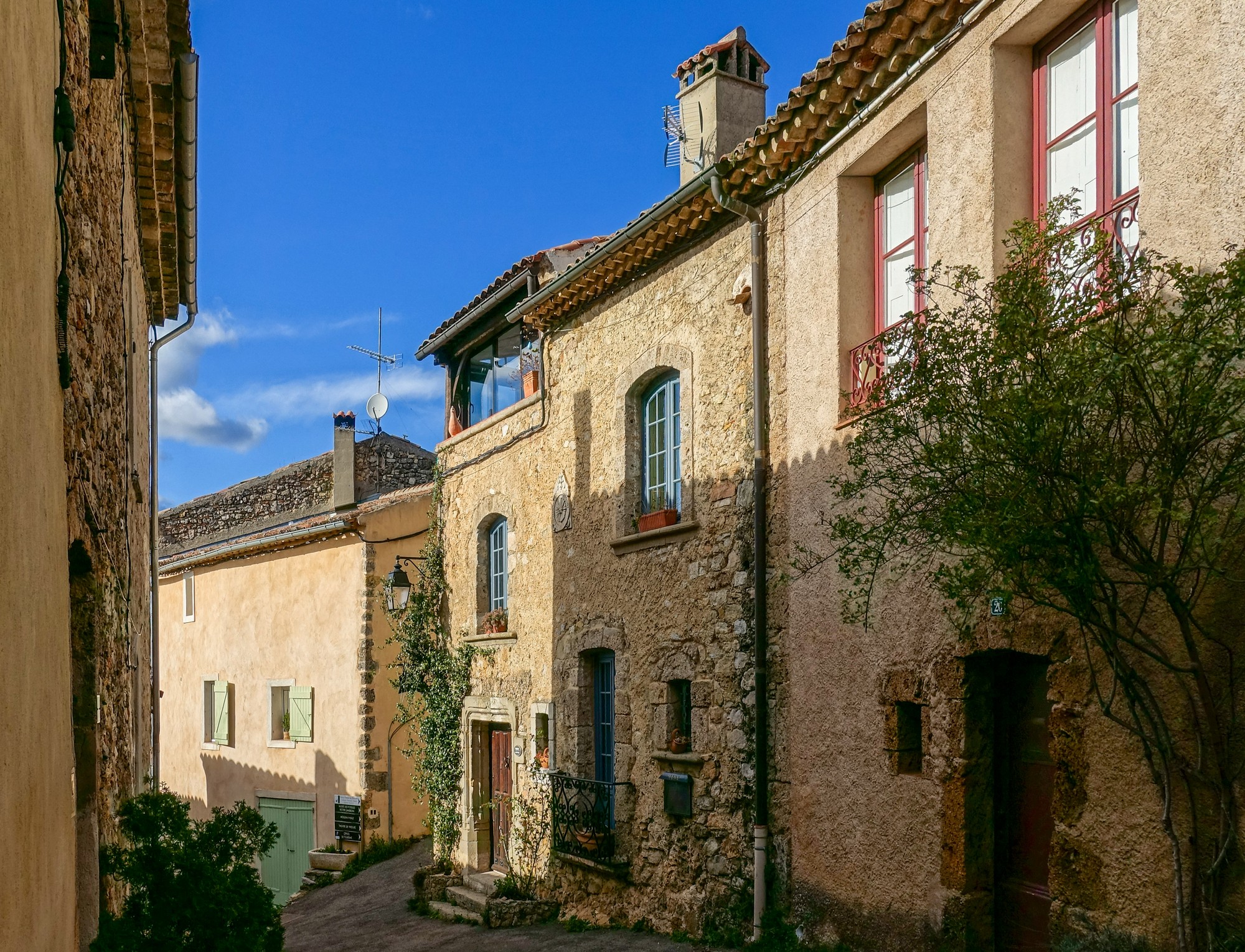 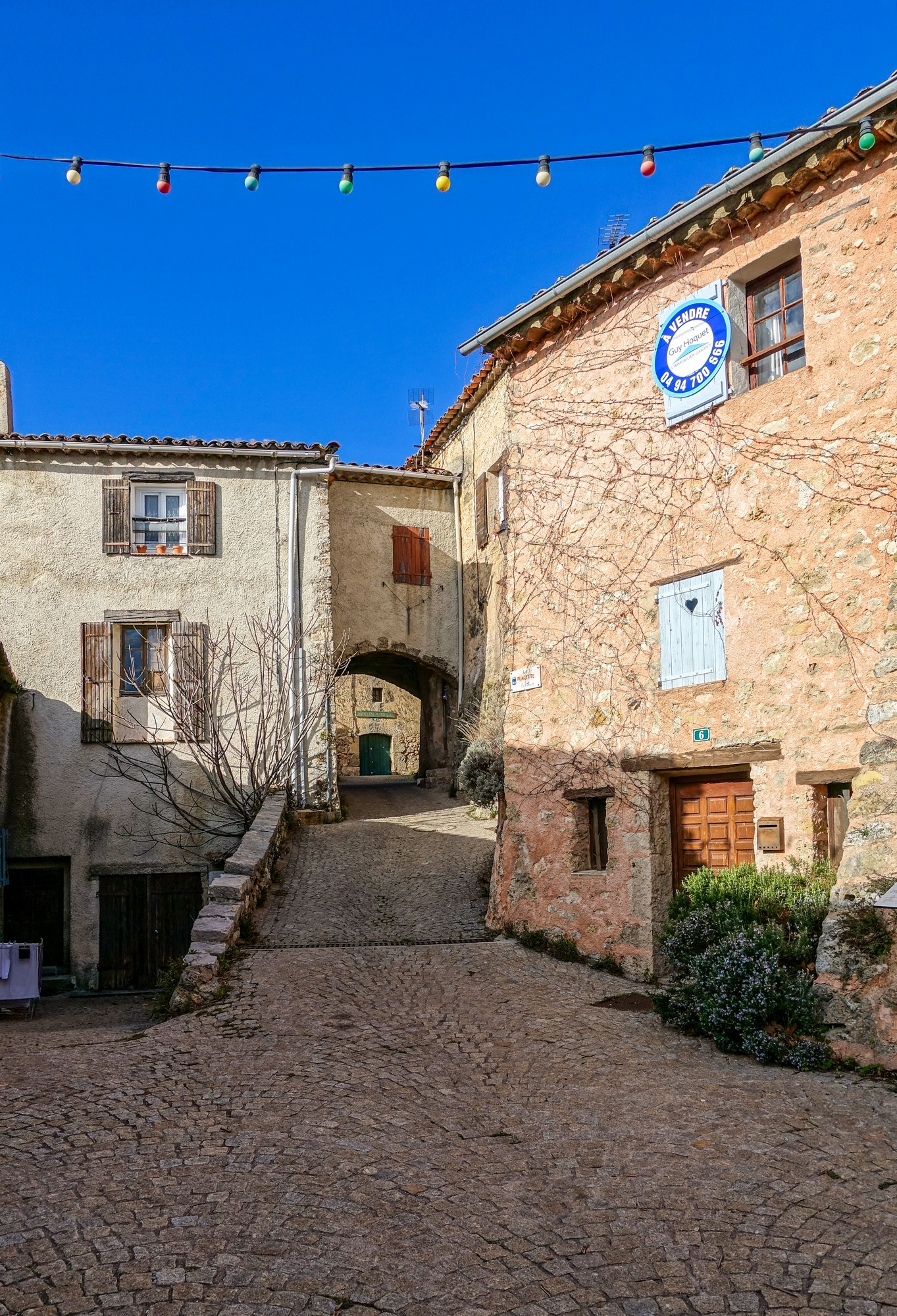 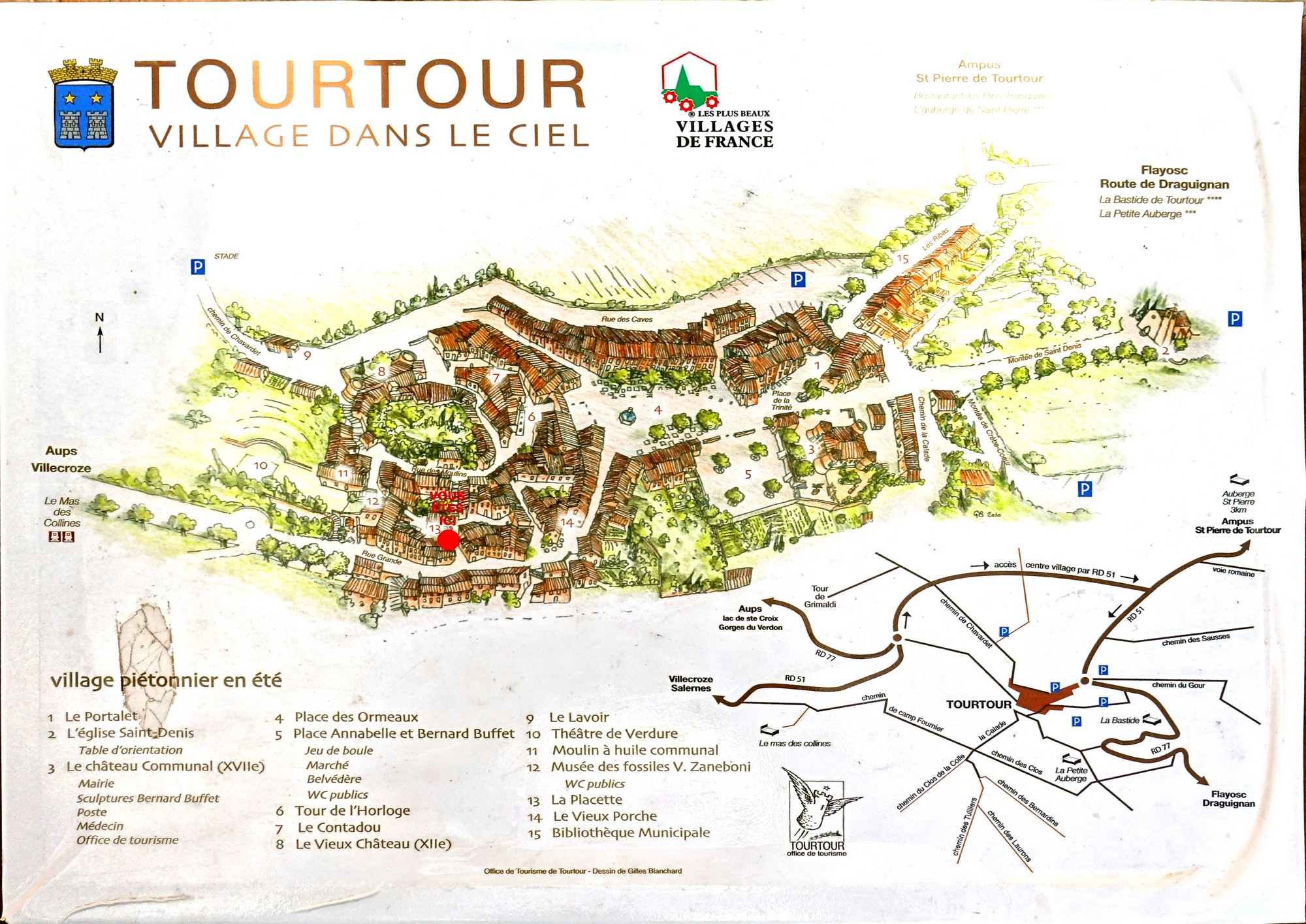 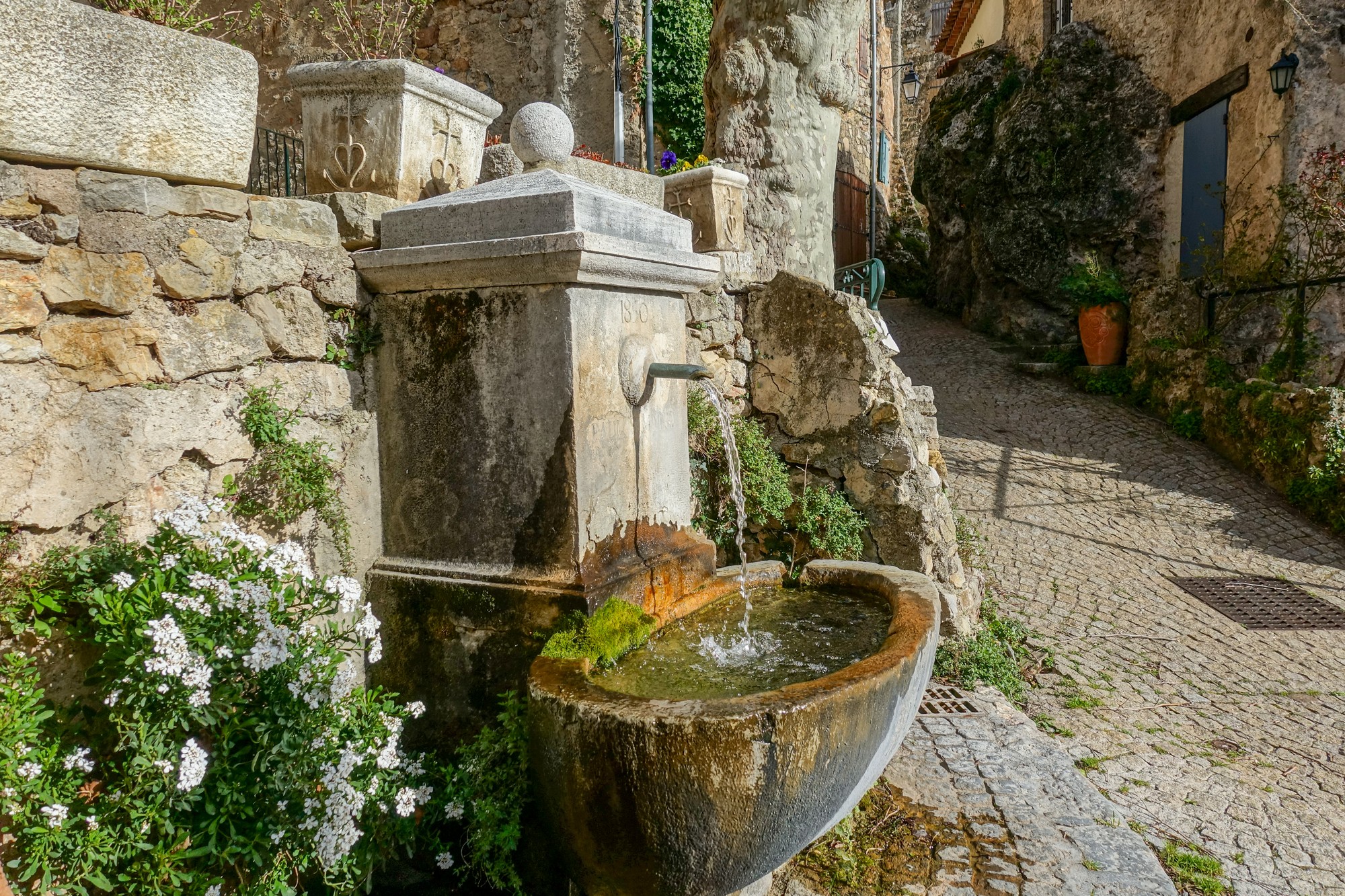 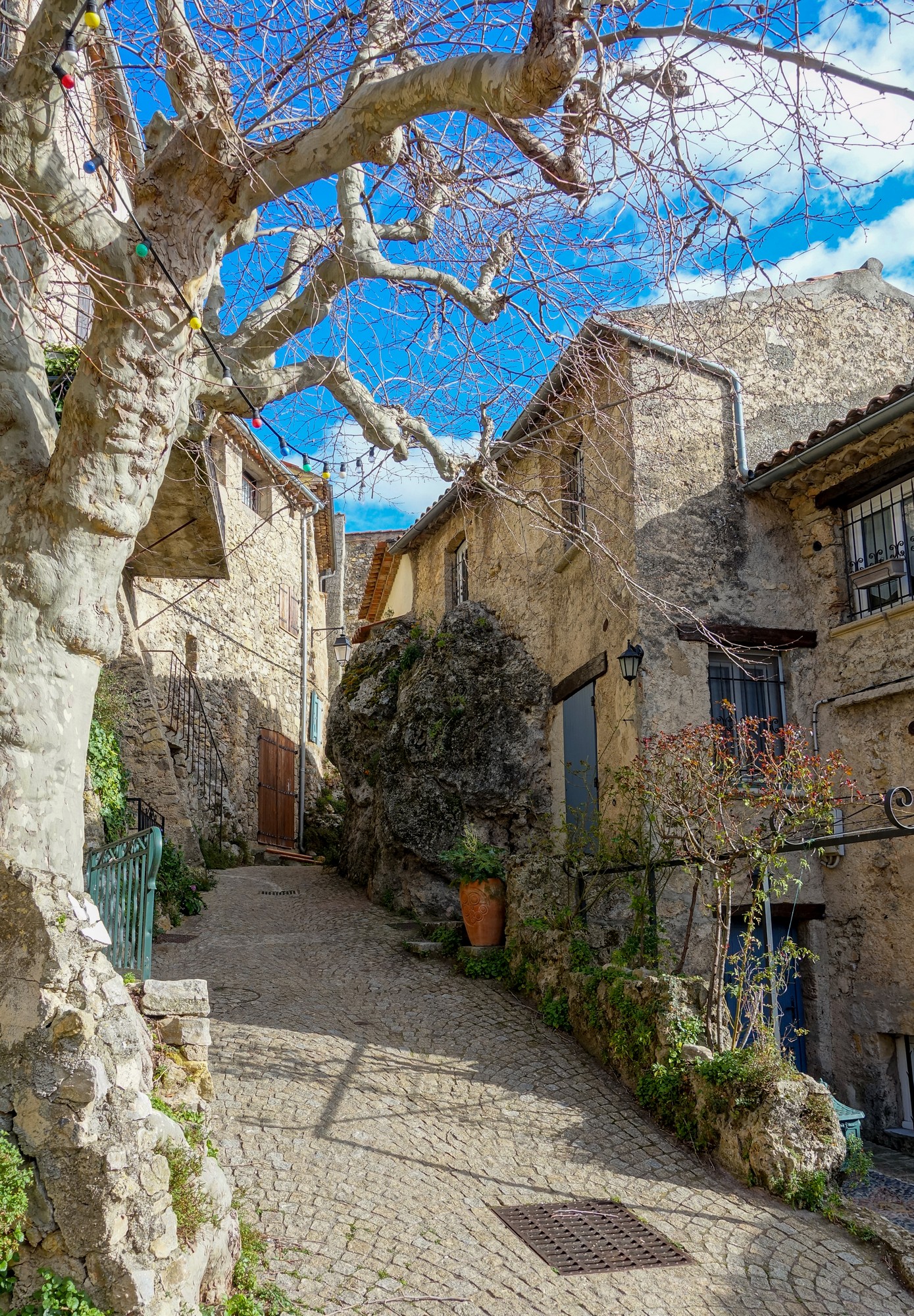 The descent from that place was excellent, as befits its title of ‘village in the sky’.  It wound down through sort of a rocky forest, I would describe it as. It would be excellent in the summer. But the cold really started to bite on the descent.

It was seven miles of downhill to the furthest point of the ride, namely Salernes, where I had just missed the market..

Five minutes later, I saw these colourful tonka toys for adults lined up at the side of the road: 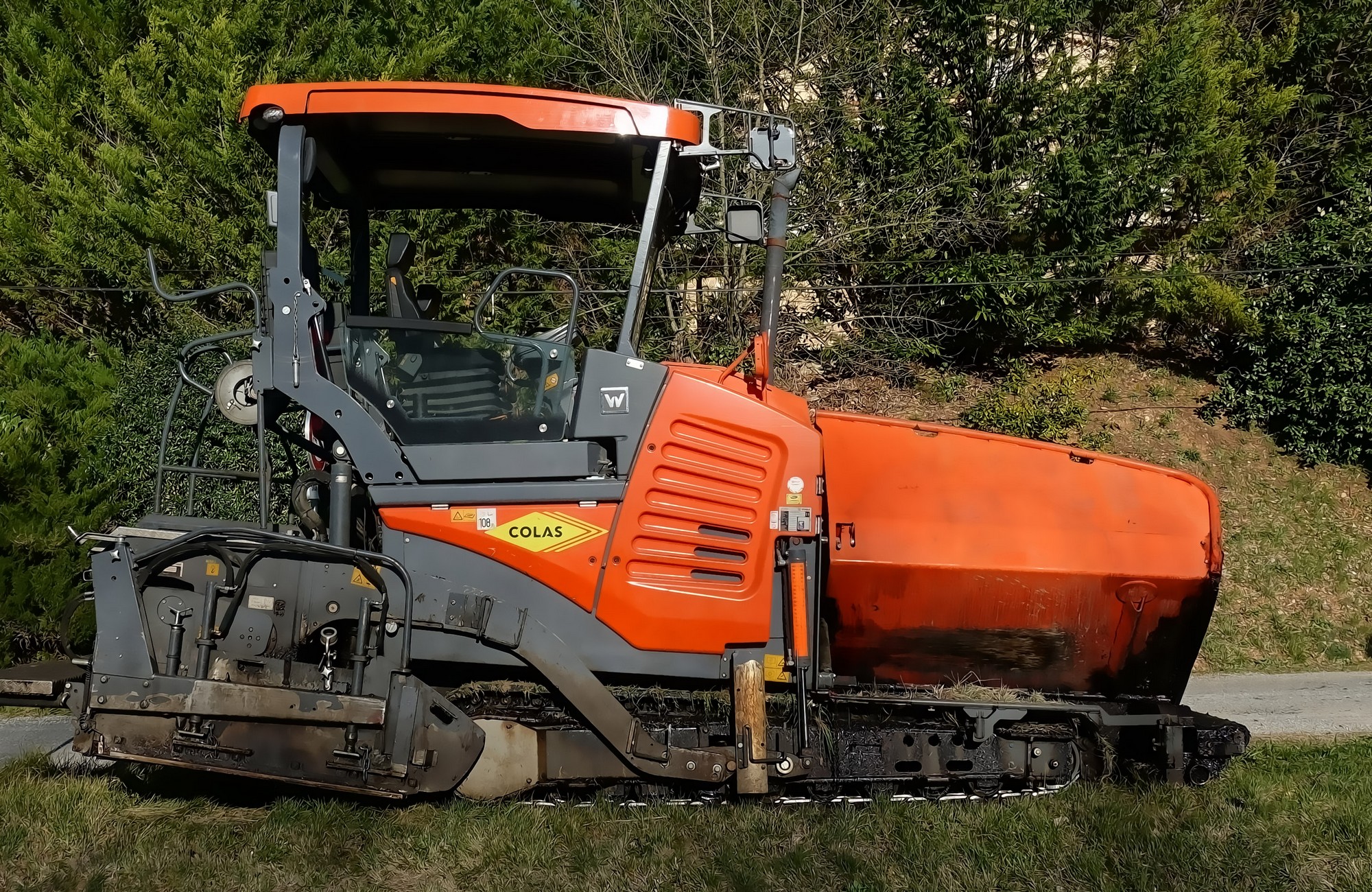 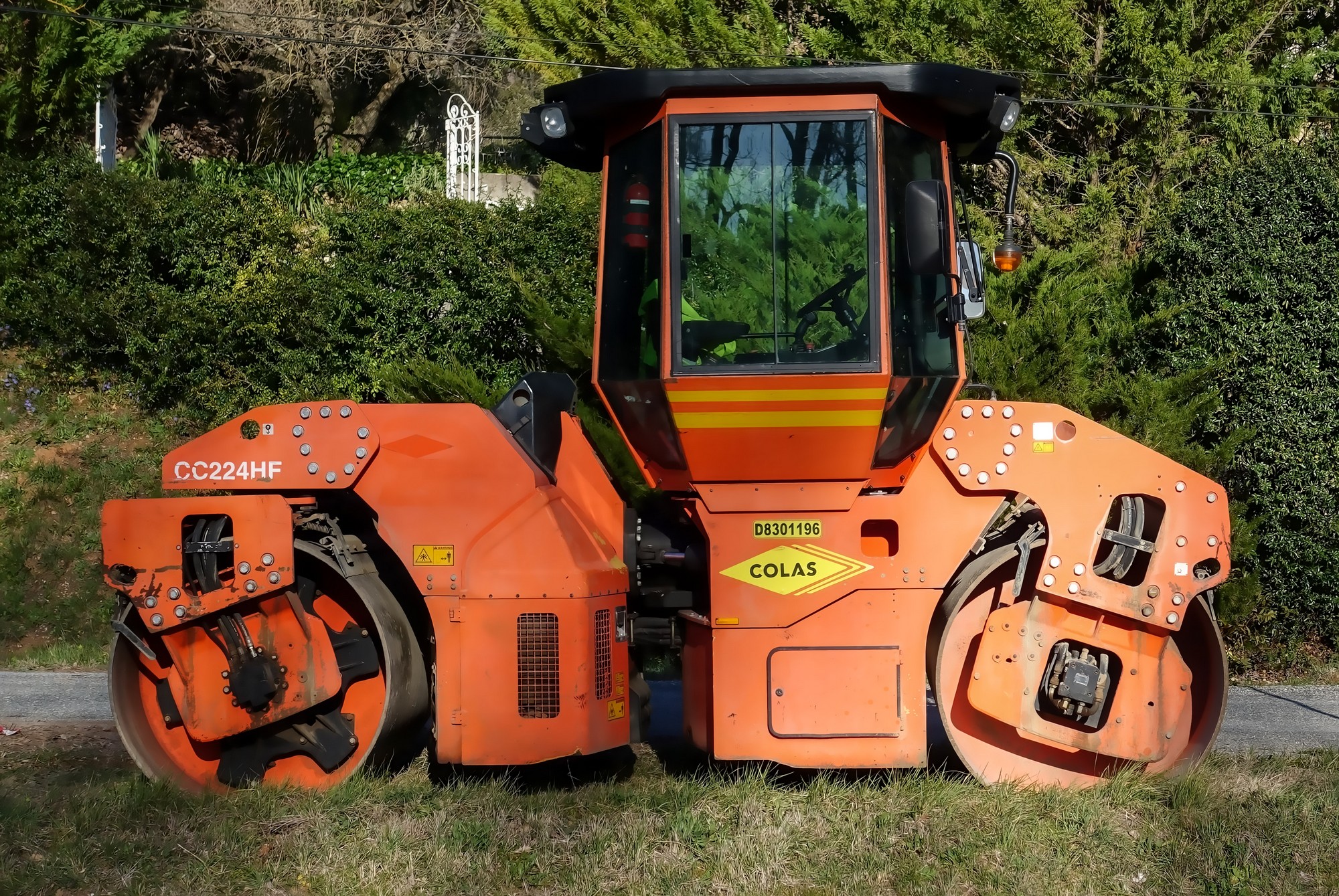 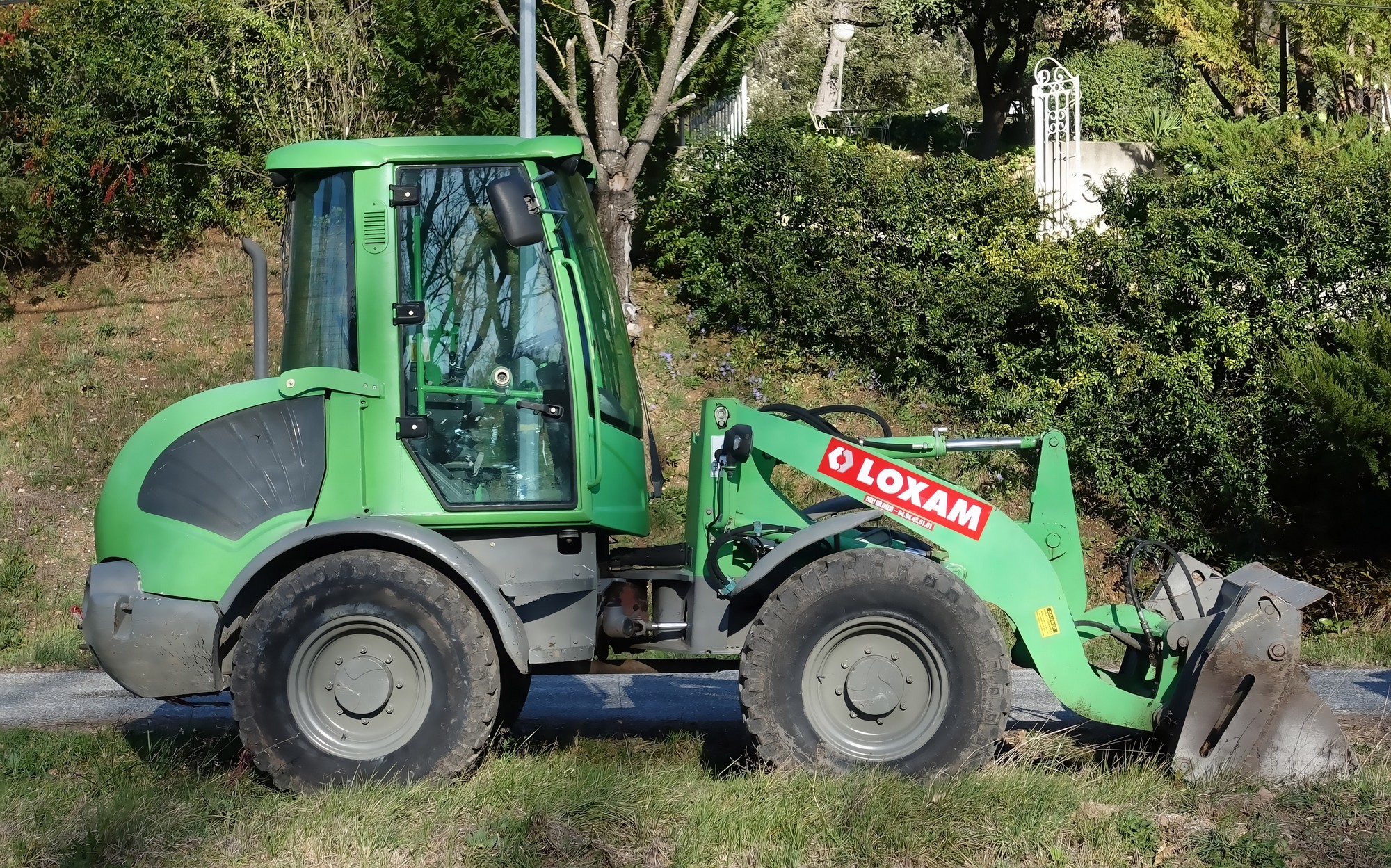 I was ever conscious of the fact that it would get dark round about 6:15, and it had been playing on my mind as it dawned on me that this ride was quite hilly, and therefore slow. But everything came to a head at Entrecasteaux ….. 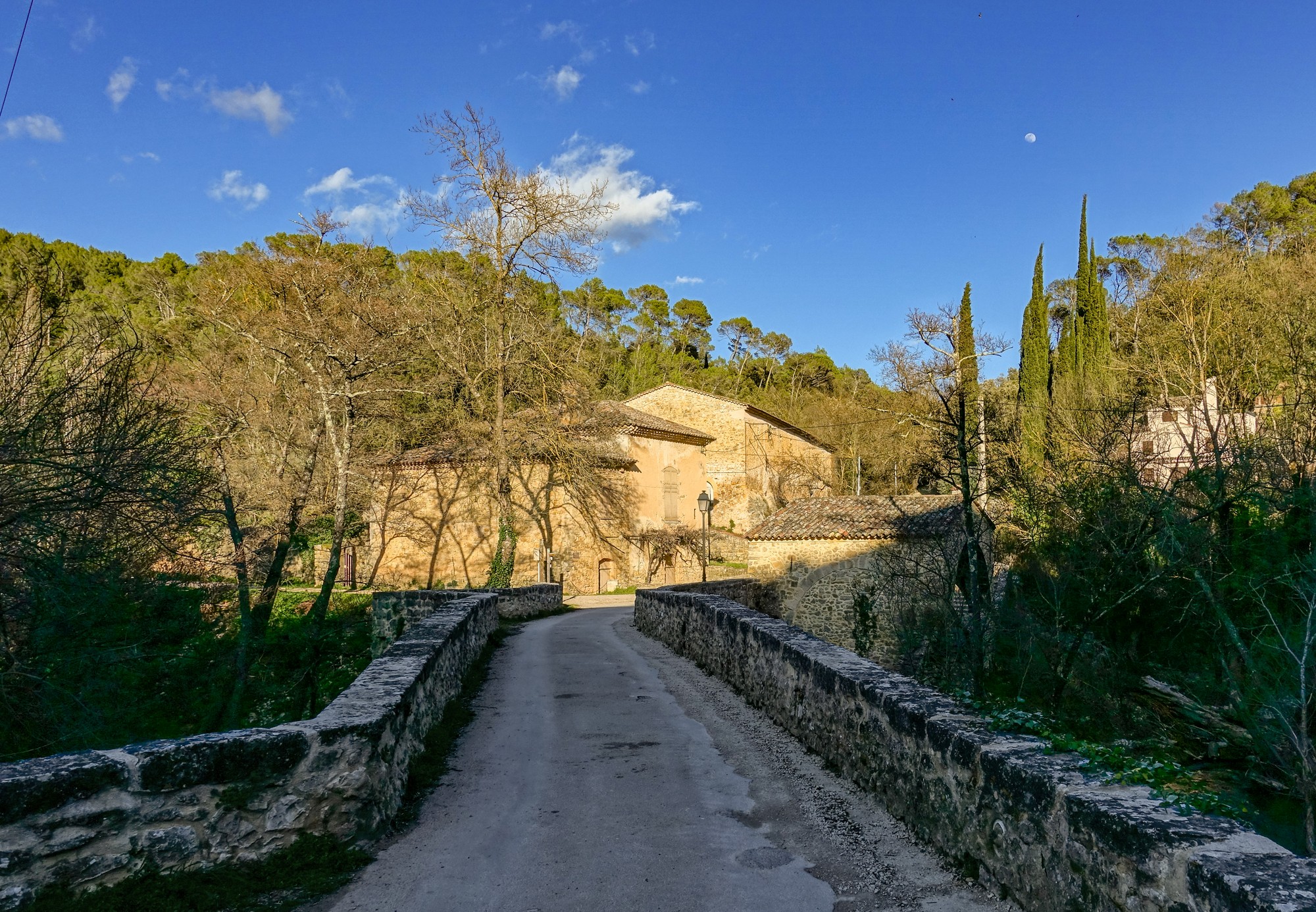 … when my Garmin took me off tarmac onto a rocky path

Obviously it wasn’t my Garmin’s fault – I had planned this route and thought this might be a short-cut. It really wasn’t a gravel path – it was a rocky path. I got up the first really steep bit quite well, hanging on for grim death, keeping going (that’s the trick) between all the boulders trying to keep on the compacted side. When I say ‘quite well’, it was a massive effort that had me panting to recover my breath afterwards. 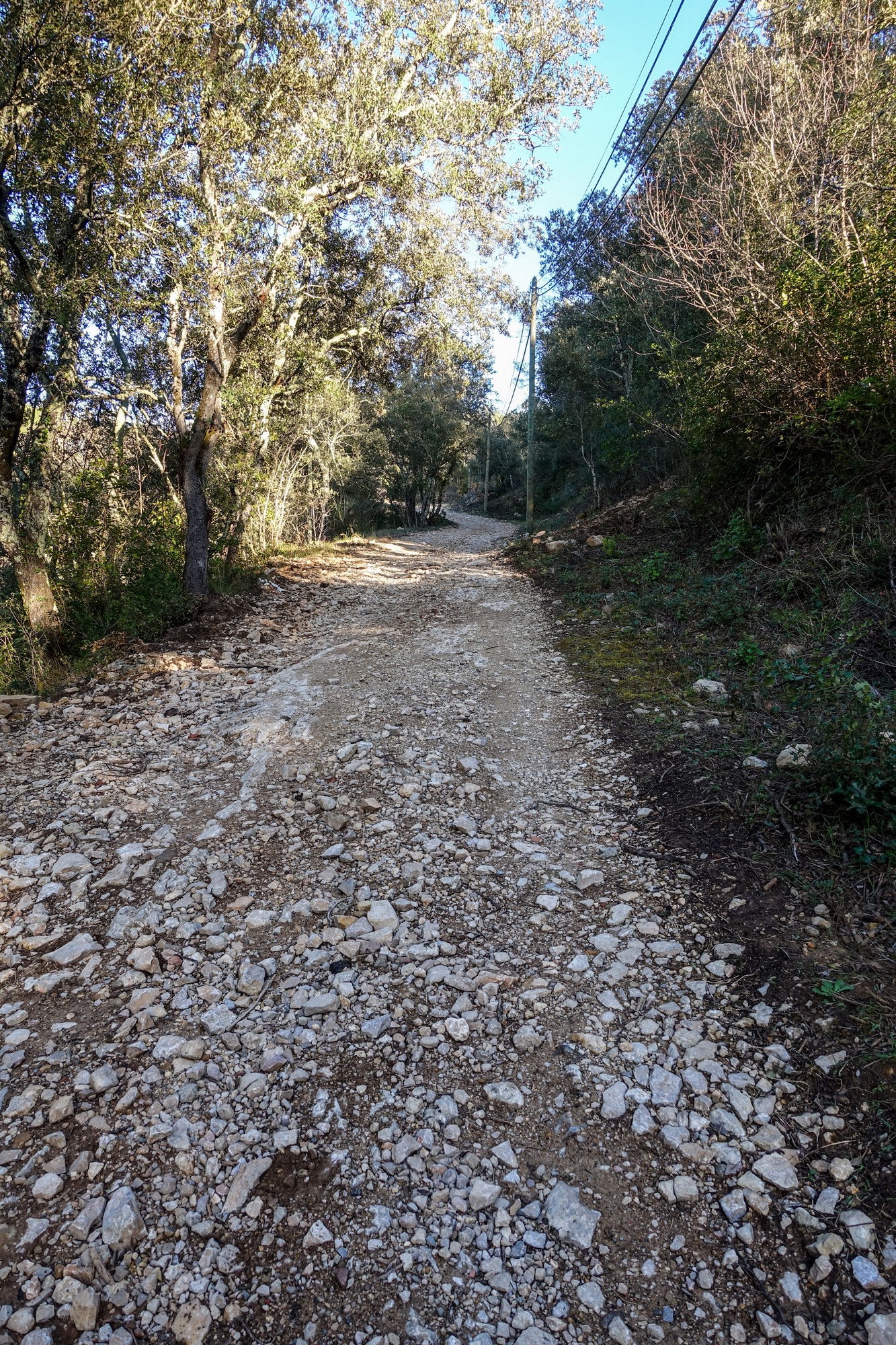 I stopped in the end because a lady in a car (surprisingly), was coming down the track. It was no road for a car; the suspension and various other bits underneath the car was bottoming-out as she bounced up and down, lurching violently from side to side over the rocks and ruts. She seemed oblivious of the distinctly off-road conditions and gave a big smile as she went by, as if to say ‘I’ve done this before’. 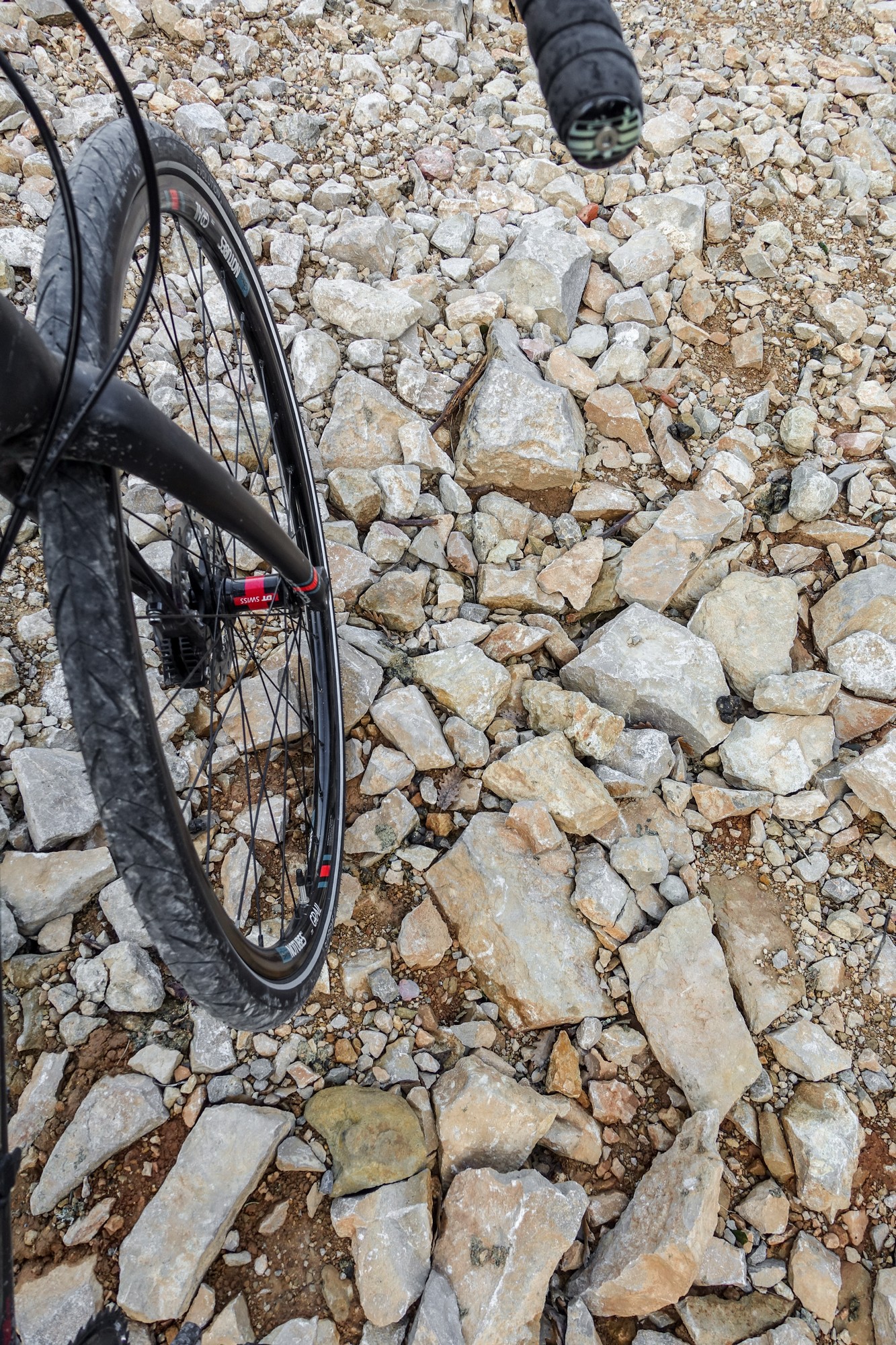 After that point, the surface degraded much more to make it impossible to ride on. So I started walking. 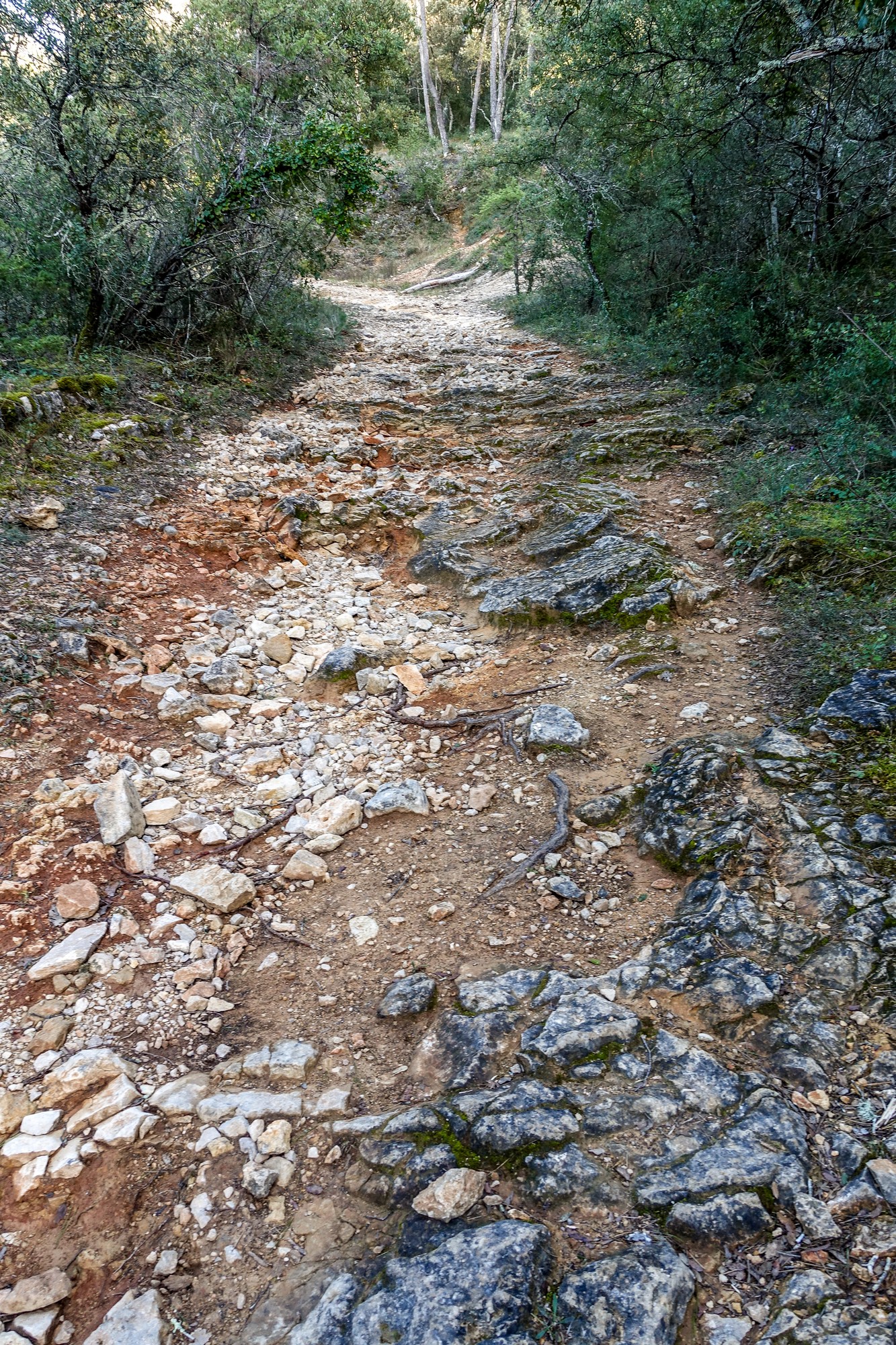 Around that point I met a guy walking his dog, and I had a bit of a discussion with him about how far the rocky bit goes on. He estimated a couple of kilometres and told me it is very sleep in places (what, steeper than this? I thought). I thanked him. He used a French phrase with the word ‘courage’. I think it’s like good luck.  Or maybe it translates to ‘you must be mad’. I carried on heaving my bike up there with thoughts rushing around my mind. Two kilometers of this would take ages, and I didn’t have ages because of the sun going down. I zoomed out on my Garmin, to see if there was a way around, but that didn’t really enlighten me.  Then I tried to get my phone to navigate me out of there, but even that wasn’t obvious – ‘head north east on road so-and-so’. When are phones going to get more bloody useful? Why couldn’t it say ‘go back down the hill the way you came’. Anyway I did at that point decide to make a decision and head back down off this rock-strewn joke of a route. I have a gravel bike, not a ‘rock’ bike.

I got back down and checked my phone. When I had been talking to that guy earlier, I’d mentioned that I was heading for a place called Saint Antonin, and he said that the ‘proper’ road to there is ‘up there’ as he pointed up to a road, high on the hillside. So when my phone decided to take me up in that direction I was quite confident that it was the right road to rejoin my route further on, without going wildly out of my way. I had become very concerned about what time I would get back, because of all the hills and the tougher than expected terrain. As I was standing near the bridge at Entrecasteaux, the church bell rang and I thought to myself that better not be 6 because then I really would be in trouble. So I quickly checked my phone and saw that it was 5. I’d reasoned that I could probably get back by 7 and, even though the sun would have gone down, there should still be some light about because it was such a sunny day with a clear sky and a nearly full moon.

So I was really pushing from that point onwards. Near the top of that climb away from Entrecasteaux, I rejoined my planned route where that rocky path joined the road from my right – it didn’t look too bad this end.

The hills kept coming. I forced myself to keep pushing on. I missed out on some fantastic photo ops as the evening sun lit up the landscape in the golden hour, but I wasn’t stopping for anything. When I started feeling particularly rough, I forced myself to stop and eat the other half of my marmalade sandwich. That was probably a good thing to do to get some sugar inside me. Also my bidon had run out and I could have done with more drink. Gradually my shadow grew longer and longer on the road (taller than my soul) as the sun went down in the sky. That road was quite busy. All the while there were cars going by without their lights on, I felt ok. Then came a point when they nearly all had sidelights on. Then came the point when they all had headlights on. My shadow no longer existed now. Then came the point I took my sunglasses off and could see a lot better in the fading light. I wasn’t really sure how far I had to go because that diversion would have screwed up the mileage. I estimated it would have been about 55 total for the whole ride. I had my Garmin on in front of me and in my back pocket the Google navigation girl was giving me audible directions every now and again. I had no time to stop and switch her off! I found it strange that there wasn’t a single signpost to La Motte, even when I felt I must have been quite close to it. Maybe it’s because it’s not that big a place. At one point, a sign said that the road was closed 6 km ahead. I thought I’m going down there anyway, even if it meant walking through a field to get round the obstruction. But luckily my planned route avoided the closed road anyway. I was very wary about riding on the side of the road with no lights. No one beeped me on the whole journey. I don’t know if that’s a good thing or bad. The extra traffic on that last part of the ride sort of added to my angst in a way.

So I was pleased that when I finally did see a sign to La Motte, it was down a country road with virtually no traffic, so I didn’t feel as guilty or exposed. Eventually I came into La Motte, but because the route had screwed up I didn’t know where I needed to go to get back to my van. Then I realised that I could ask people where the tennis club was because that was near where I was parked. I first asked a couple of teenage girls and they pointed me in the general direction. Then I asked a group of noisy skateboarding youths where the tennis club was, and a couple of them came over and were happy to give me directions. Shortly after that, I recognised the area and was able to just get back without any further help. It was 7:15 and almost dark. I’ve never been so glad to get back to the van.

The physical and mental effort had taken their toll. I just crashed out for a couple of hours, trying to get warm. Temperature was probably round about 10ºC by the time I got back. I later calculated that the ‘rocky detour’ had cost 30 minutes.

Click any image too see full screen and step through