A beautiful sunny day so I wore shorts and short-sleeved jersey. Not windy like yesterday. Rest of this post is in the form of reports made along the way.

14:26 First report coming from 9 miles into the journey and I’m still within earshot of a saxophonist that I came across just playing his sax, sat on a picnic bench by a stream, opposite some rocks for good acoustics. His name is Ludovic, and I spent about 20-minutes chatting to him, shooting the breeze about various jazz musicians and classical musicians that we both like. Names like Chick Corea (in fact the whole Return to Forever line-up), Pat Metheny, John Mclaughlin, Baden Powell, Albeniz, all came up in conversation. Strangely (I thought) he hadn’t heard of Roland Dyens, but he did know La Bicyclette. We got on really well.

It’s a beautiful day, just right for shorts and short sleeve top but I feel a bit overdressed in my long finger gloves. There has been a bit of climbing, nothing special. I stopped at the lookout point where I’d stopped in my van the other day. 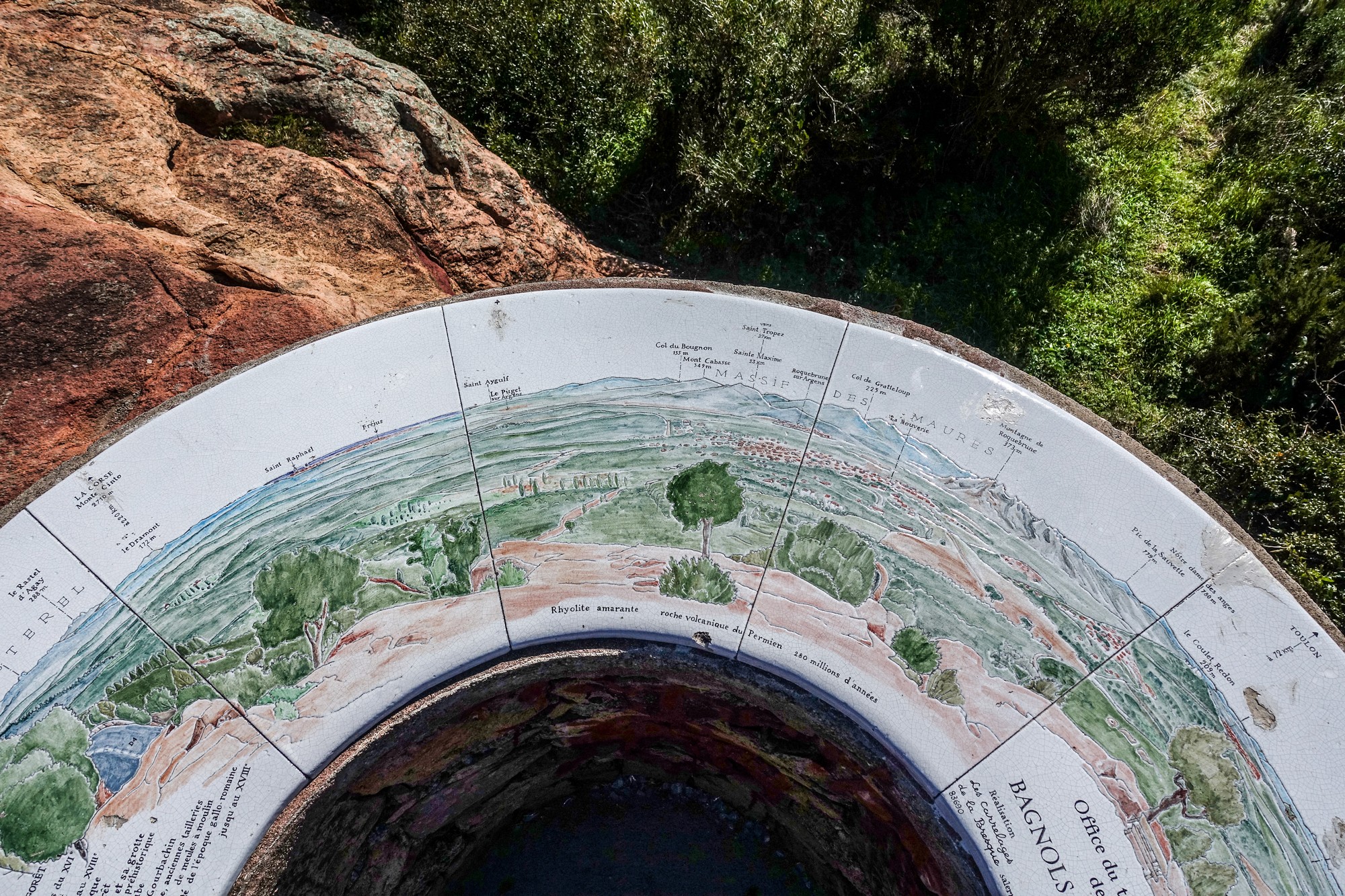 The area is full of red rocks and sort of sparsely populated forest or something. 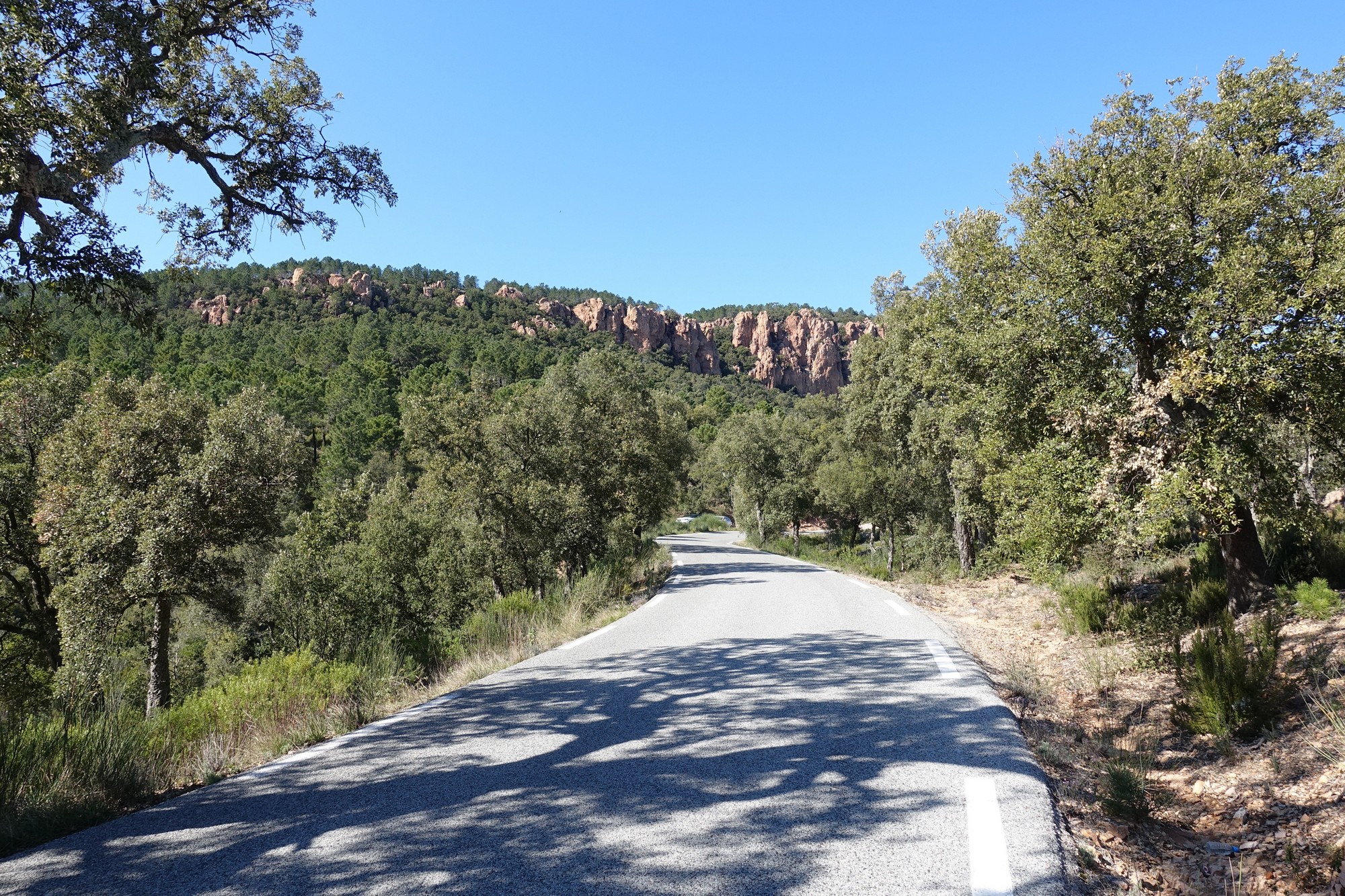 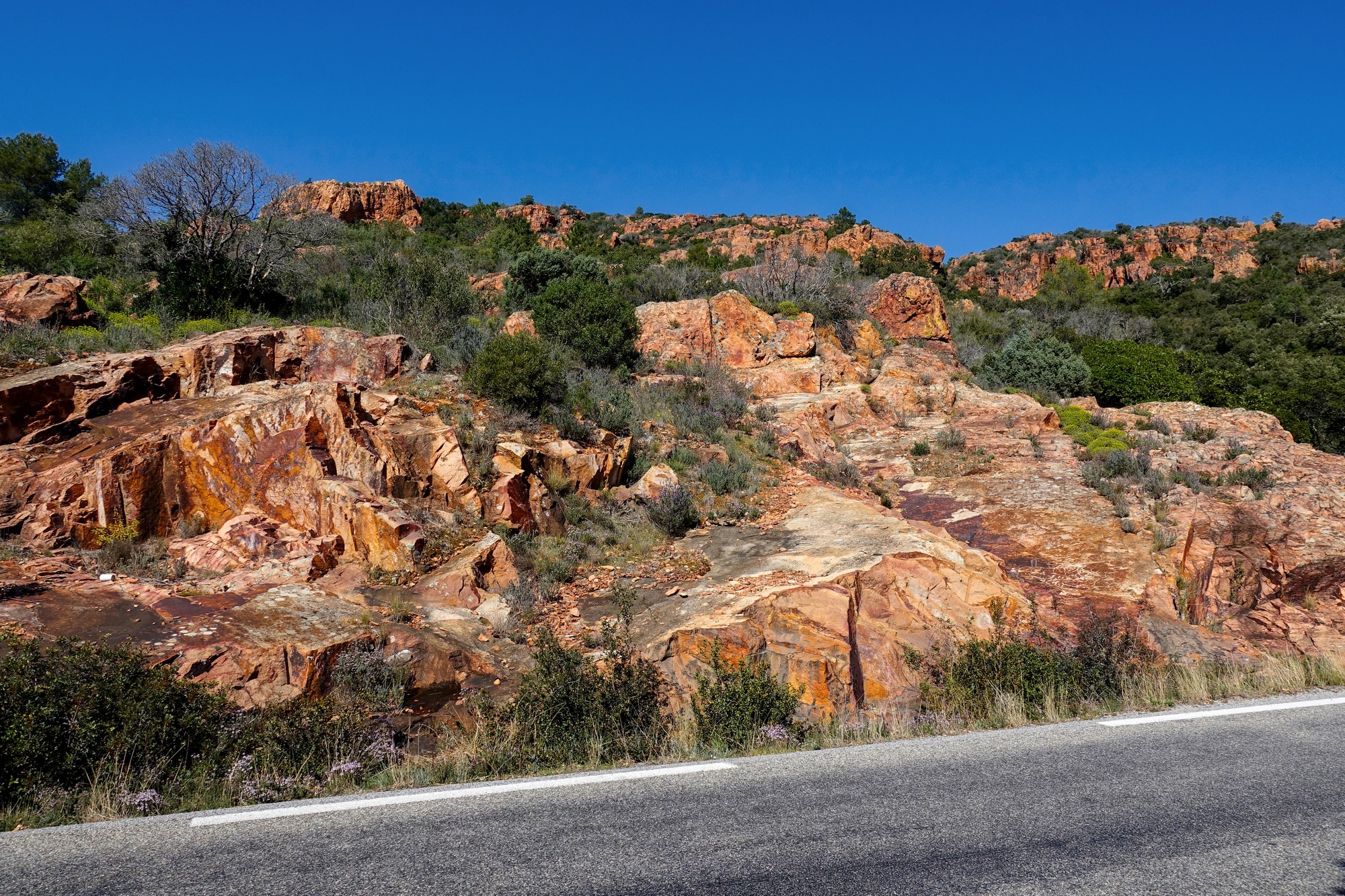 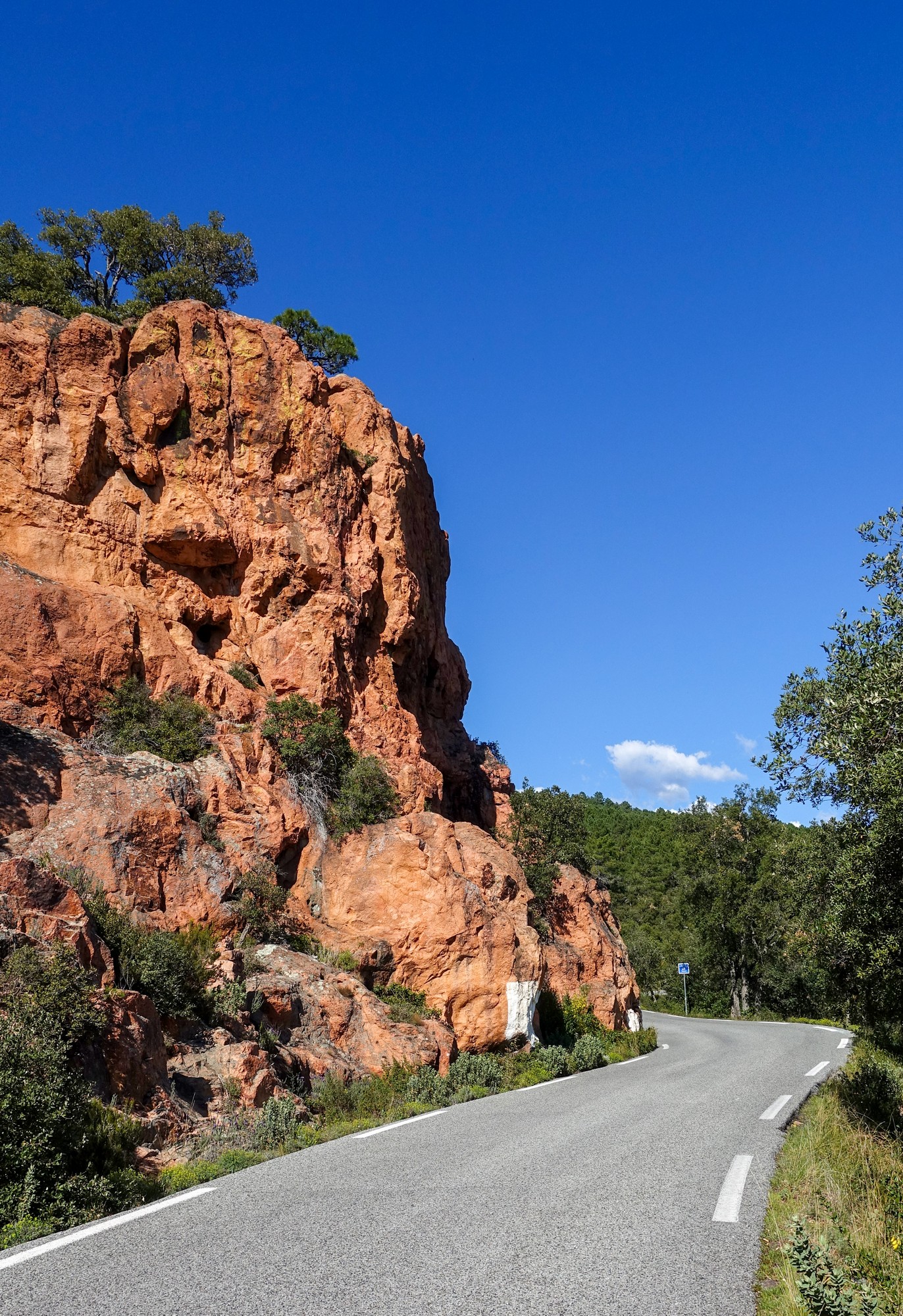 The many instances of Umbrella Pine fascinate me and I keep stopping to get photos, each of which I’m convinced will be better than the previous one. 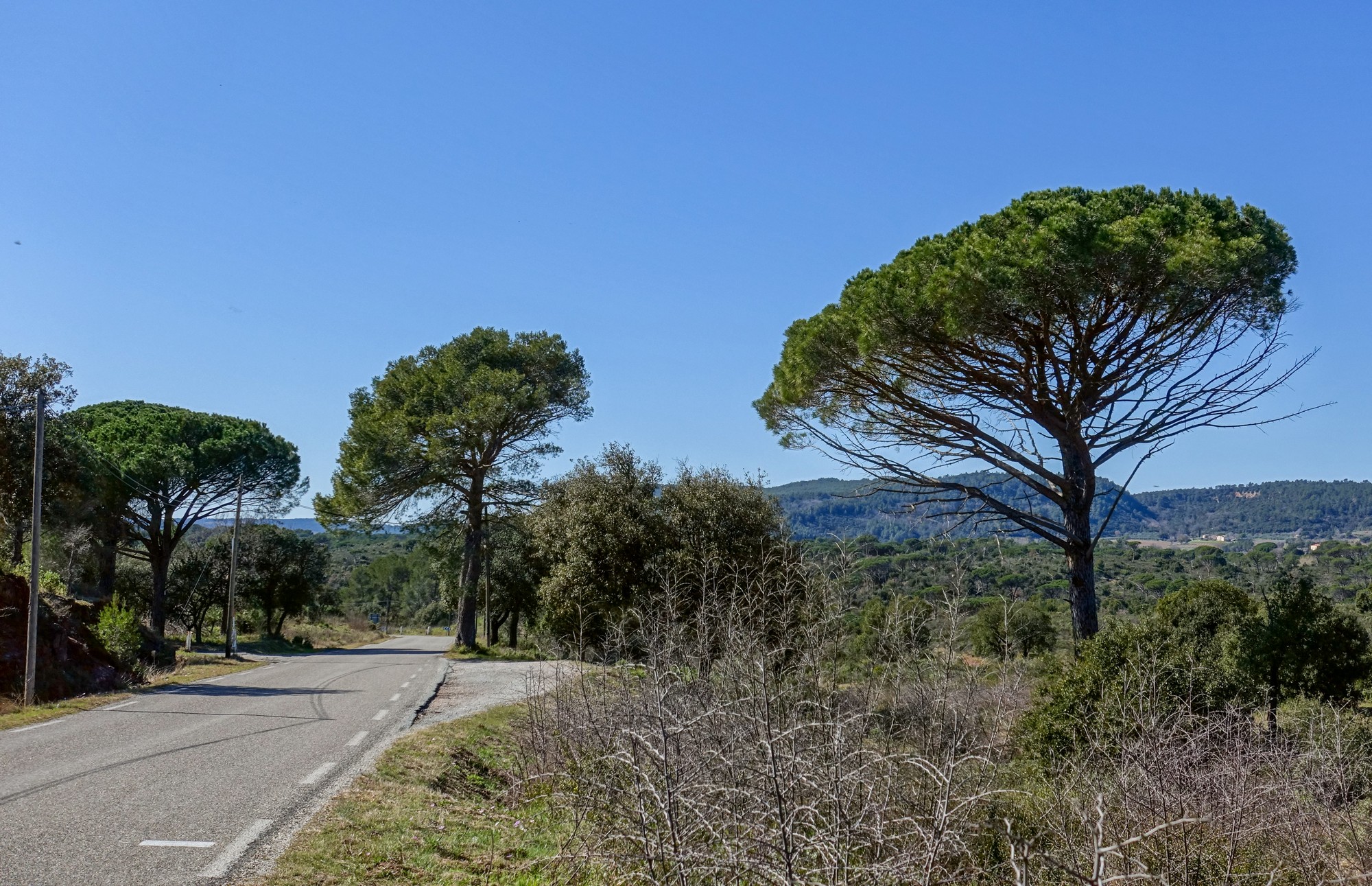 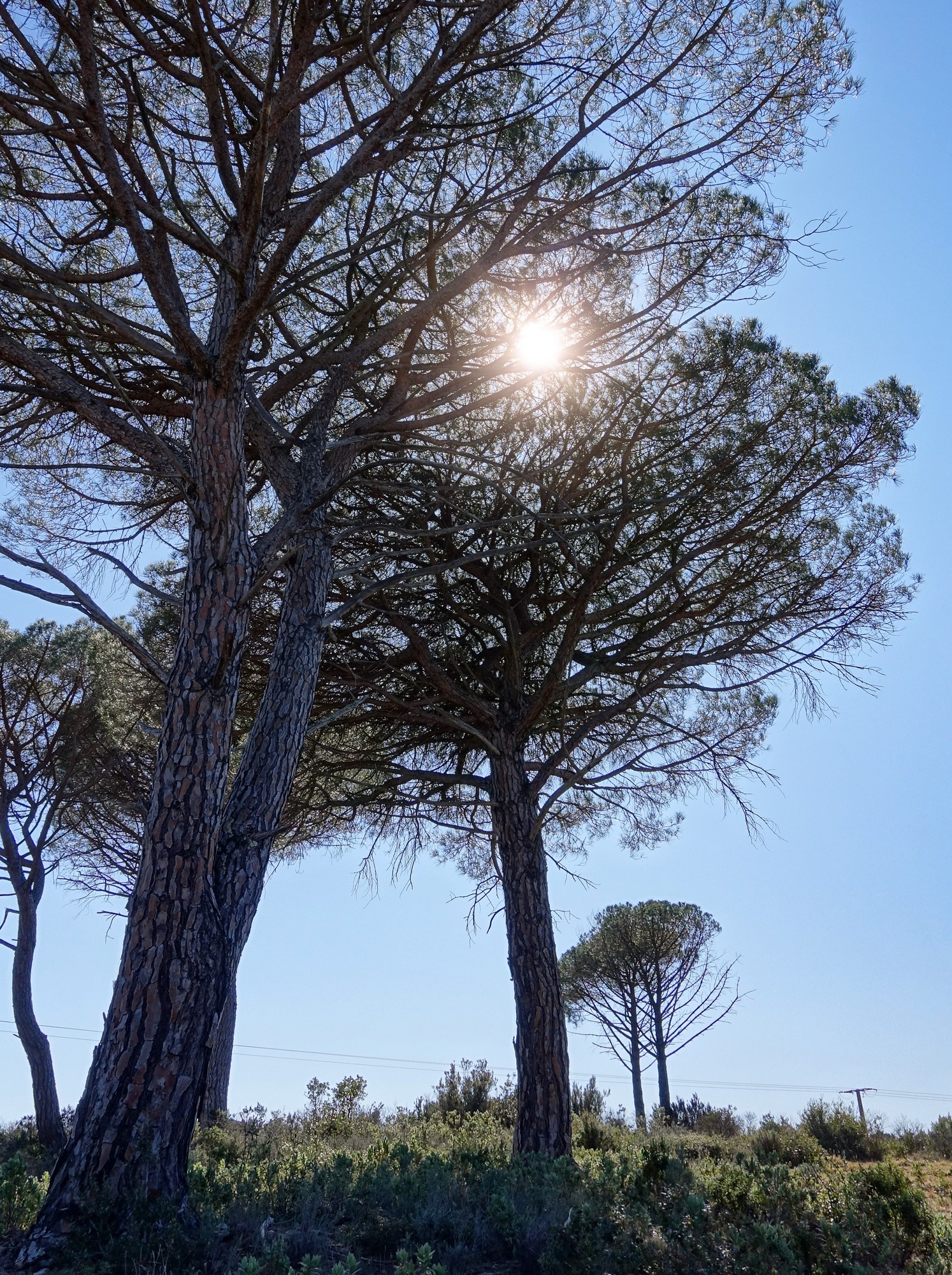 It’s a bit like heathland in a way but with big trees. Just standing here recording this with the sun burning into the back of my legs and I can still hear Ludovic’s notes drifting through the air.

16:25 This report coming at the 25-mile mark. I have just left the sleepy village of Claviers.

After leaving the saxophone behind, there was lots of road through sort of scrubland / foresty type thing, on the way to Bagnols-en-Forêt.

Some of it climbing, some of it descending. The sun has been dappling through the trees most of the time. The route through the forest was very pretty.

There was a bit of a climb to get to Claviers

… and now I’m descending steeply away from Claviers… 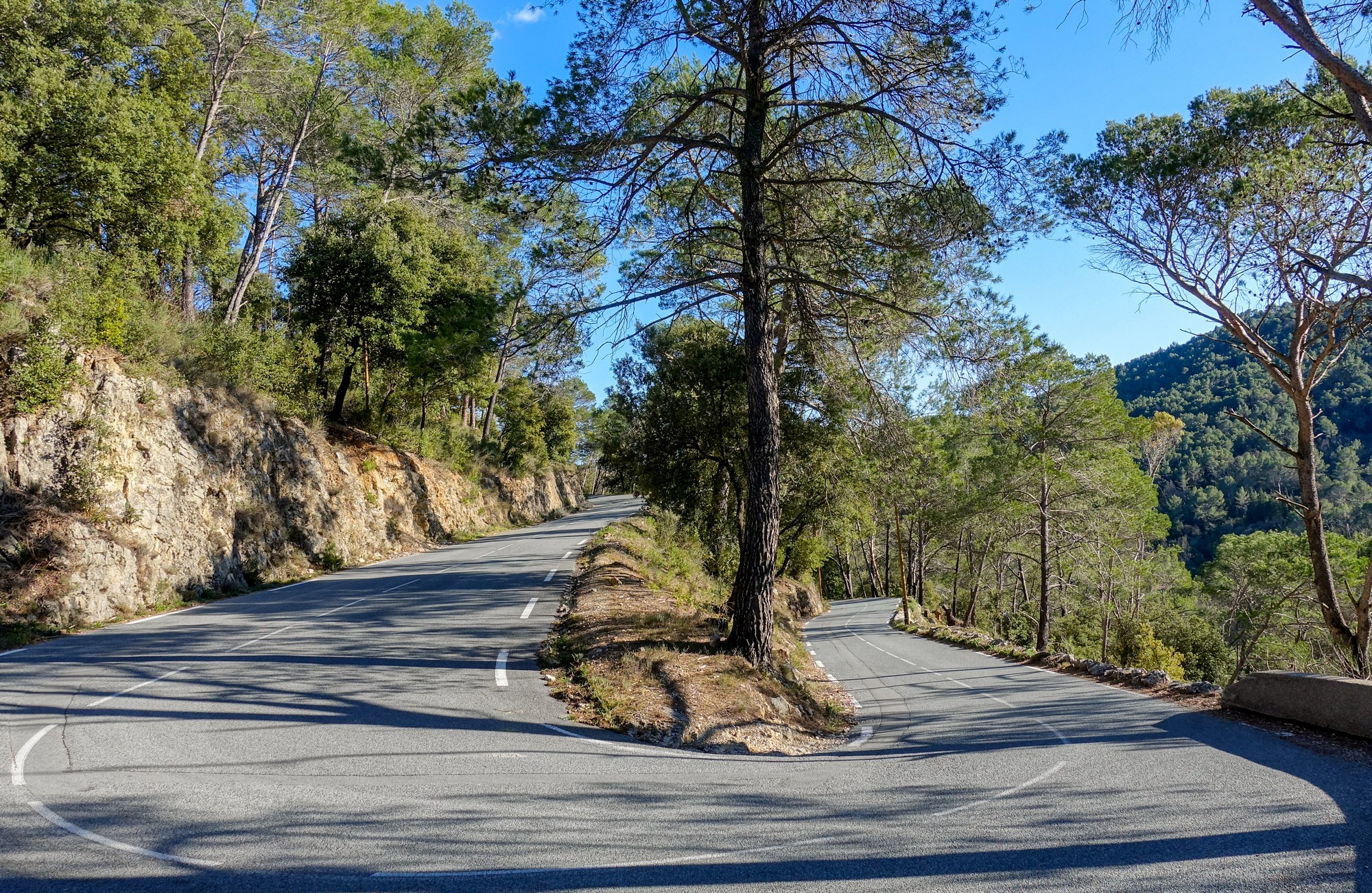 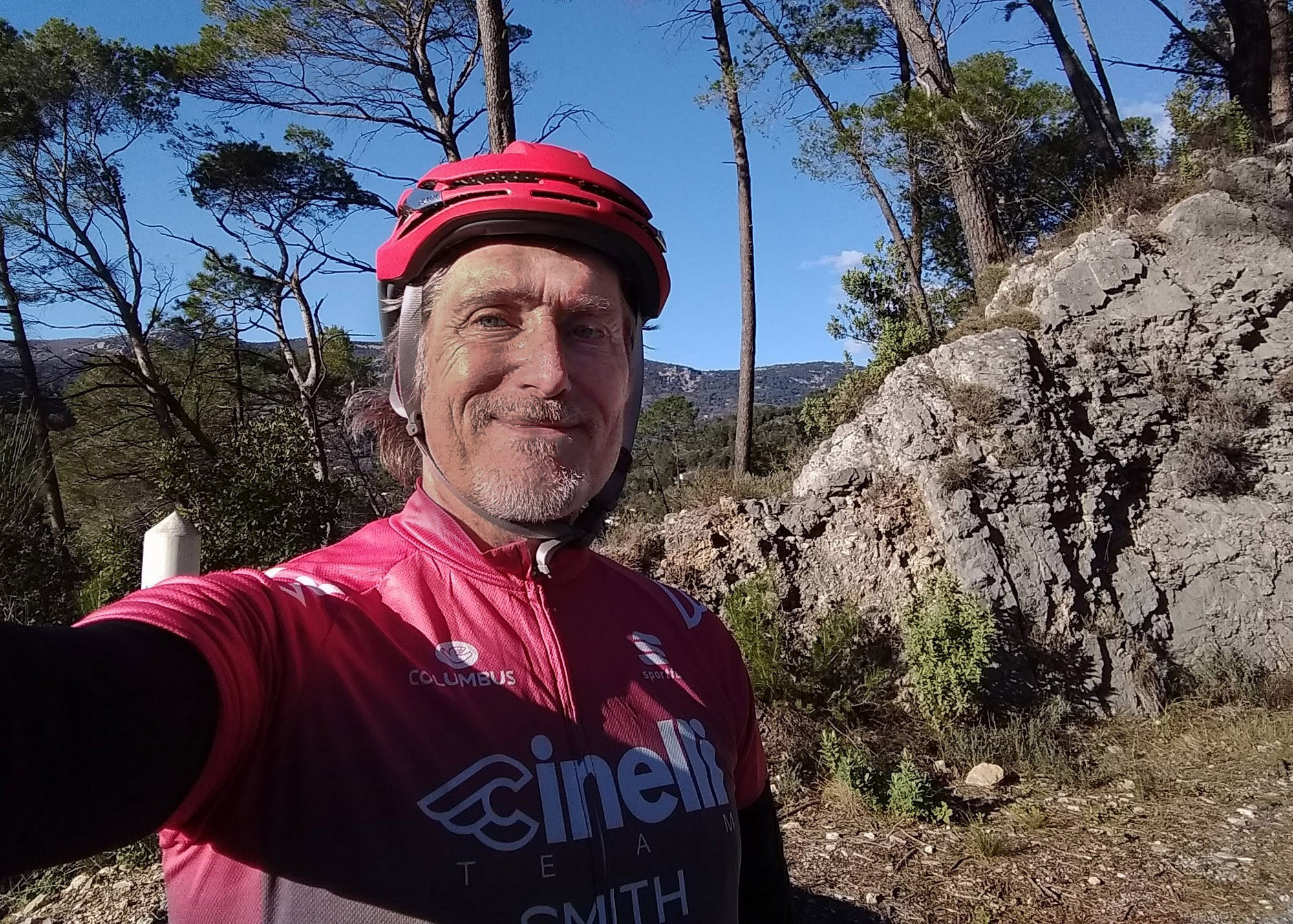 I think I have one more climb to come and then it’s downhill all the way, or hopefully I could be wrong and there might not be any more hills to come!

17:04 Well I was right. There was another climb. It started as soon as I had descended from Claviers. I climbed up and over the Col de Boussaque, to another sleepy village called Callas. There was a steep descent from that village during which I decided to put my arm warmers on. That turned out to be a brilliant decision because further down that climb I hit some quite cold patches of air. And, lo and behold, there was yet another climb before I came to the the downhill / flat section all the way back to base, which was a pleasure to be on. 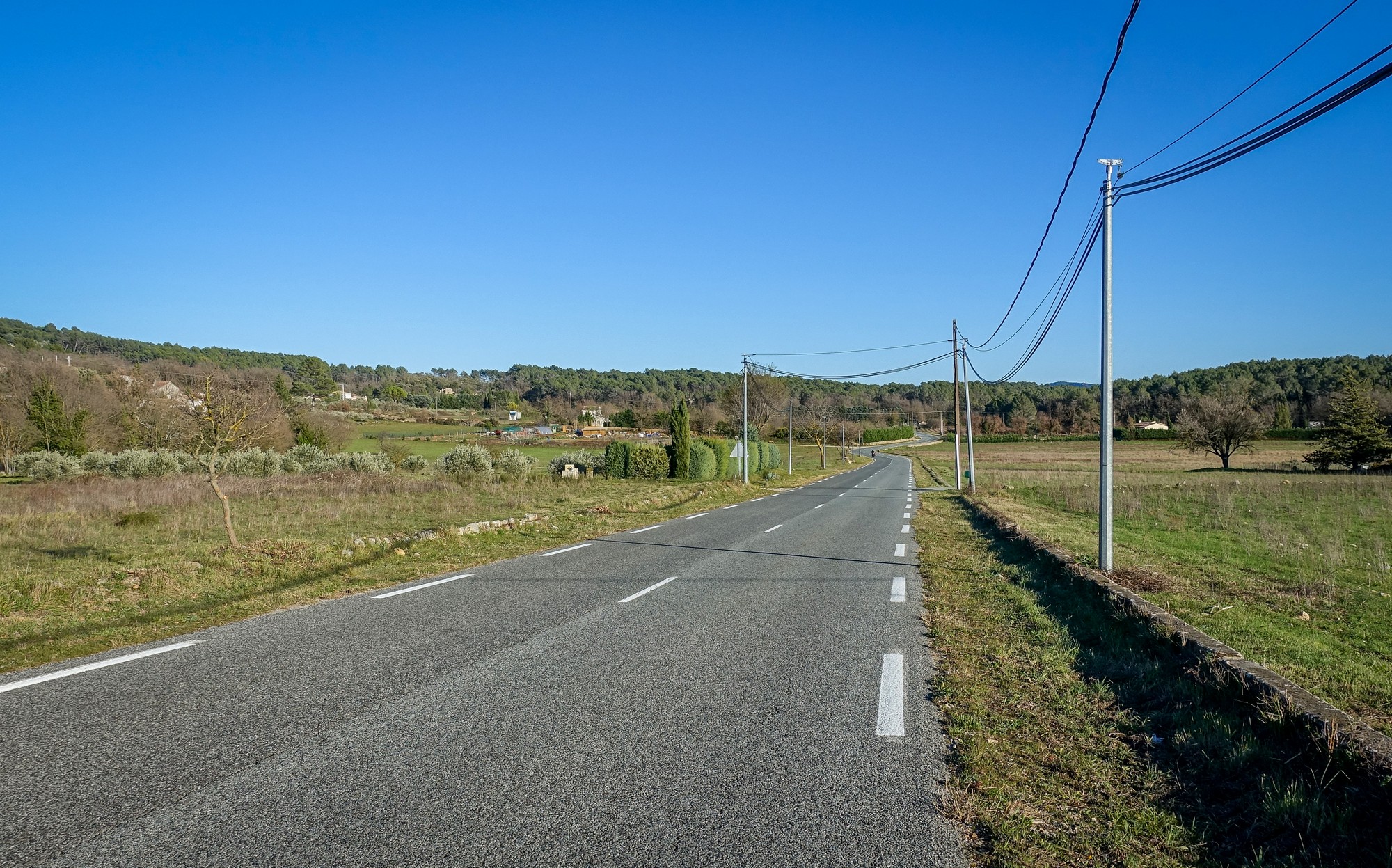 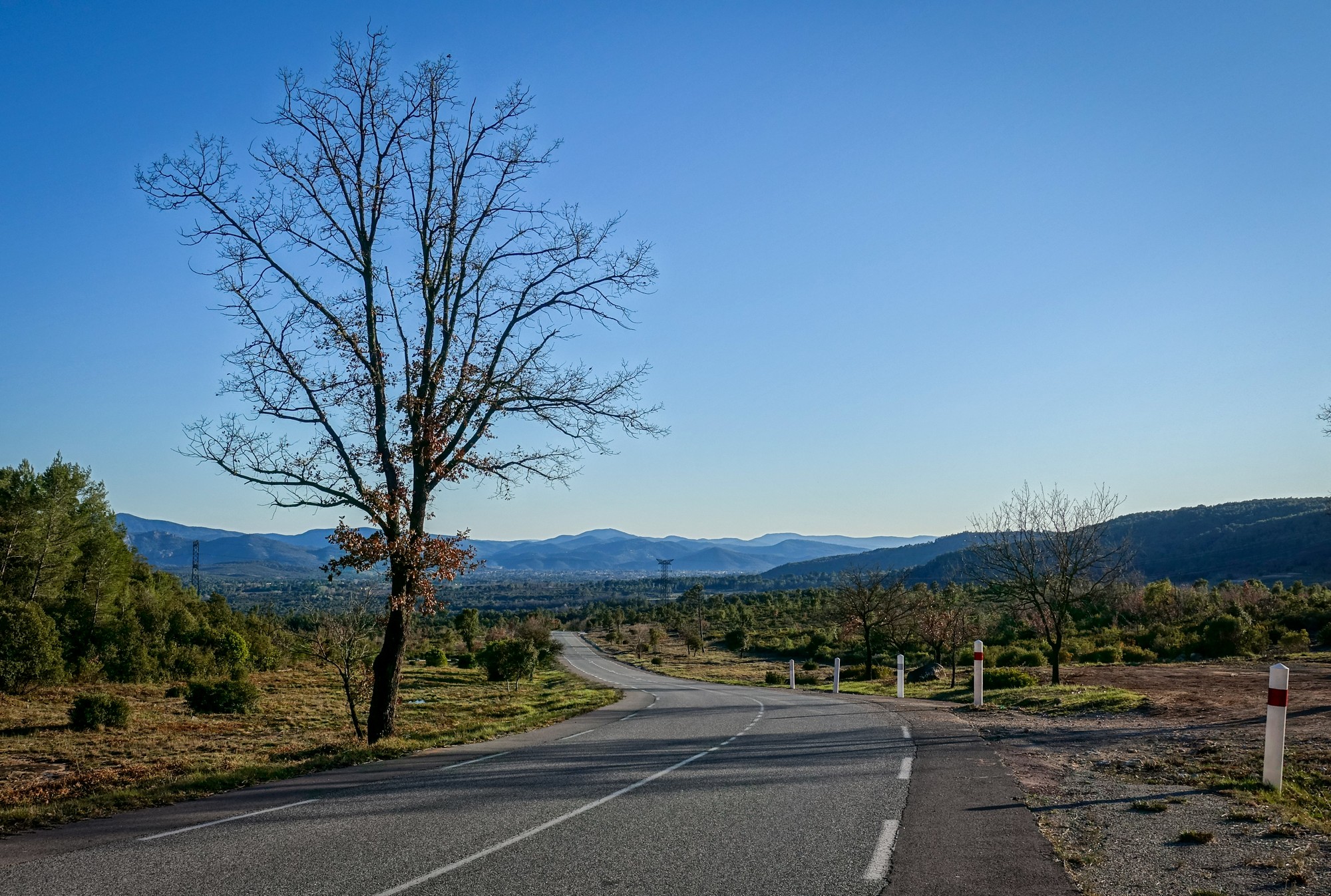 The evening sun was lighting up the Provence landscape and the red rocks in a beautiful light, so I kept stopping to take photos. I should have had two bidons today because, like yesterday, I ran out of juice far too early.