It was a mainly sunny, but breezy, day. I wore shorts/short sleeves and base layer. I fitted my rear light and took two bidons this time, with my rain jacket, arm warmers and snood all strapped to my bike frame. I left at just after 1pm, having allowed the day to warm up slightly.

First report coming at 11 miles.
The main feature of the journey so far, especially earlier on, has been very strong winds. I had changed the route around so that I would have the wind behind me on the way there, banking on the wind easing through the day. There was a whole section on a busy main road with the wind gusting strongly from my right, which made for a very hairy experience. Even though there was a cycle lane, it’s still nerve-racking when the wind is blowing you towards the traffic. I slowed down to about 8 mph at one point. Reacting to one particularly strong gust, I even quickly unclipped my left shoe instinctively; I didn’t actually have to put my foot down, but just kept moving slowly, head-down.

There was more shelter to the right from that point and the wind, while present all day, never posed such a problem as it had on that stretch of road. Shortly after that, I went through the lovely town of Vidauban.

Outside of Vidauban, I’ve been on peaceful country roads and now the wind is behind me, as planned. The sky is almost free of clouds, just some off to the North. 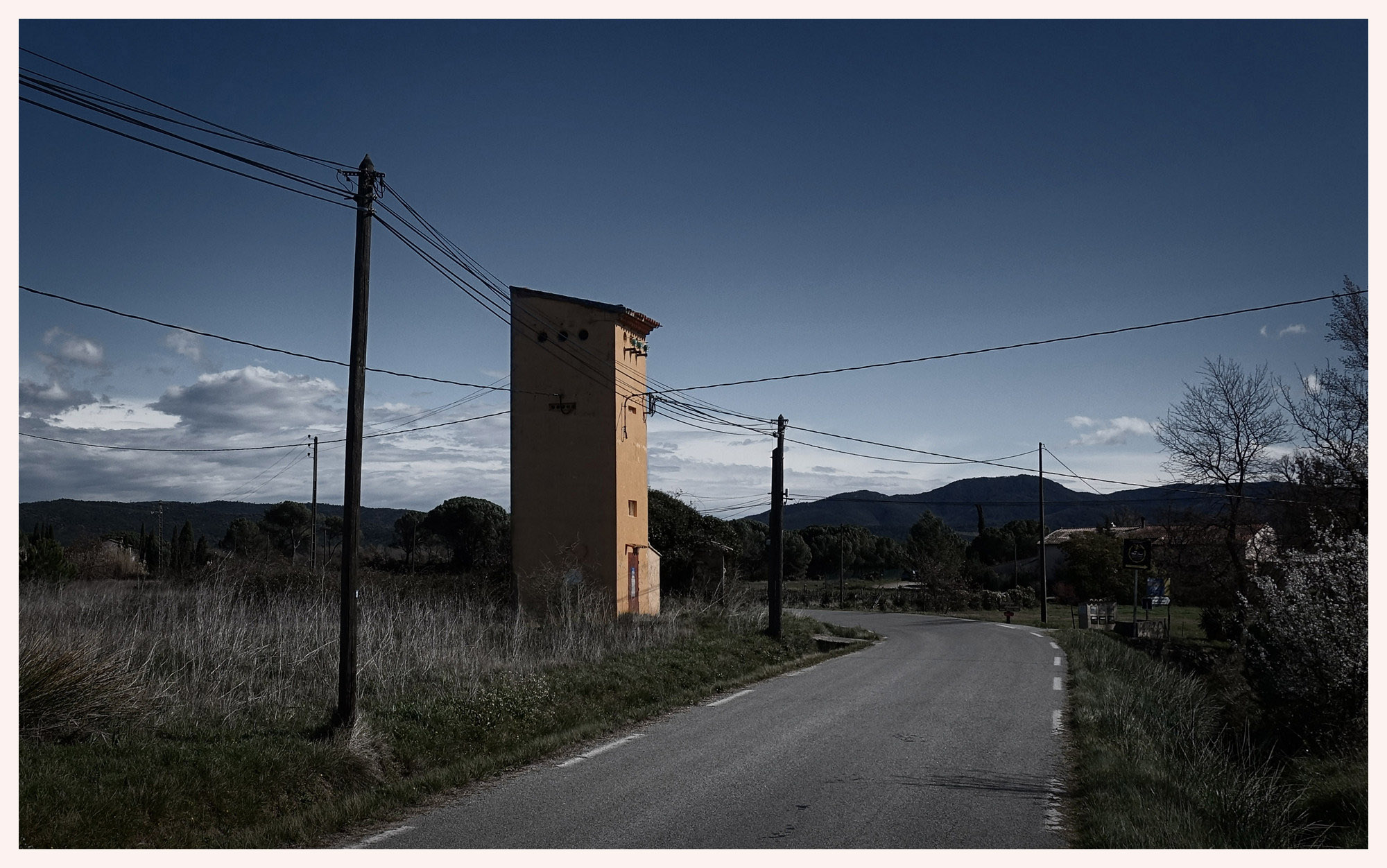 Just as I approached an old iron bridge, I thought I’d try to get a photo of it, so I turned down a side road and came upon an amazing area of rocks, waterfalls and ruined buildings. 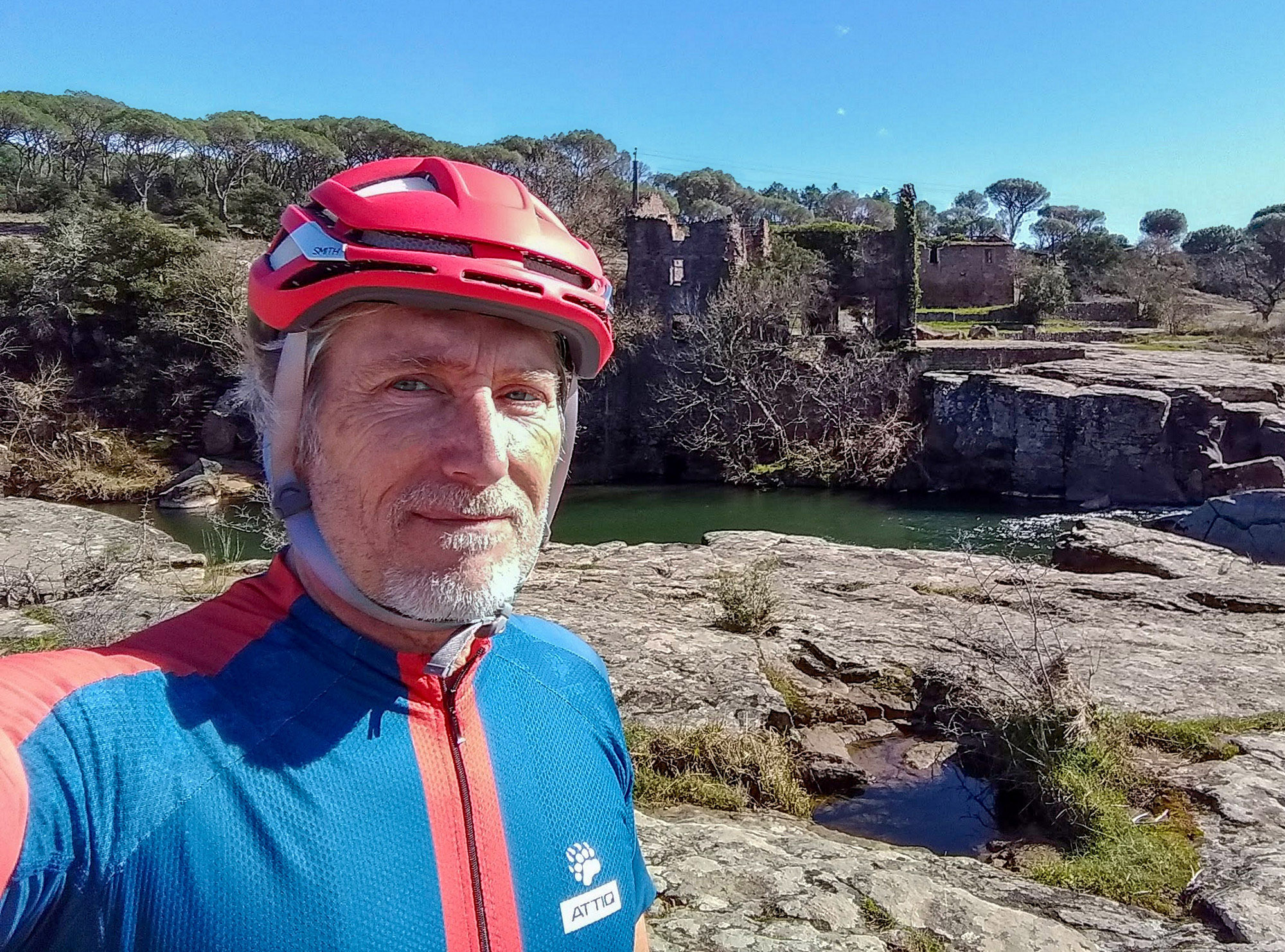 I’ve got some photos here, so now I’m moving on again.

This report coming at 28 miles, from the marina in Sainte-Maxime.  Just as I start speaking into my phone, a bell rings behind me – just trying to see what the time is now – oh yes, 4 exactly, so I’d better get a move on actually.

Well, if you’re going to ride down to the Med, you couldn’t pick a more beautiful road than the one I’ve just been on. Mainly through the woods and scrubland since the last report. There was no traffic on it and the surface was brilliant. 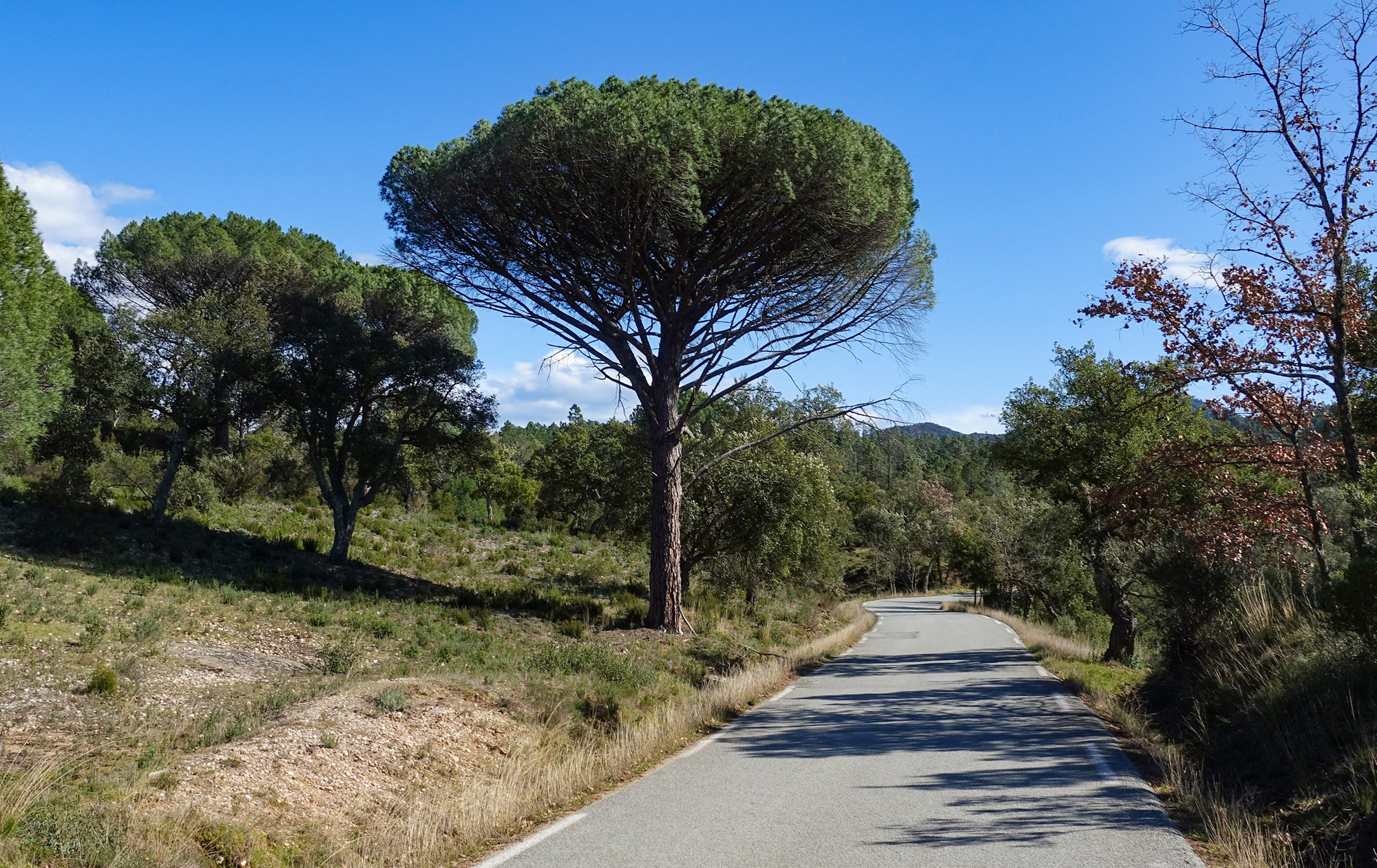 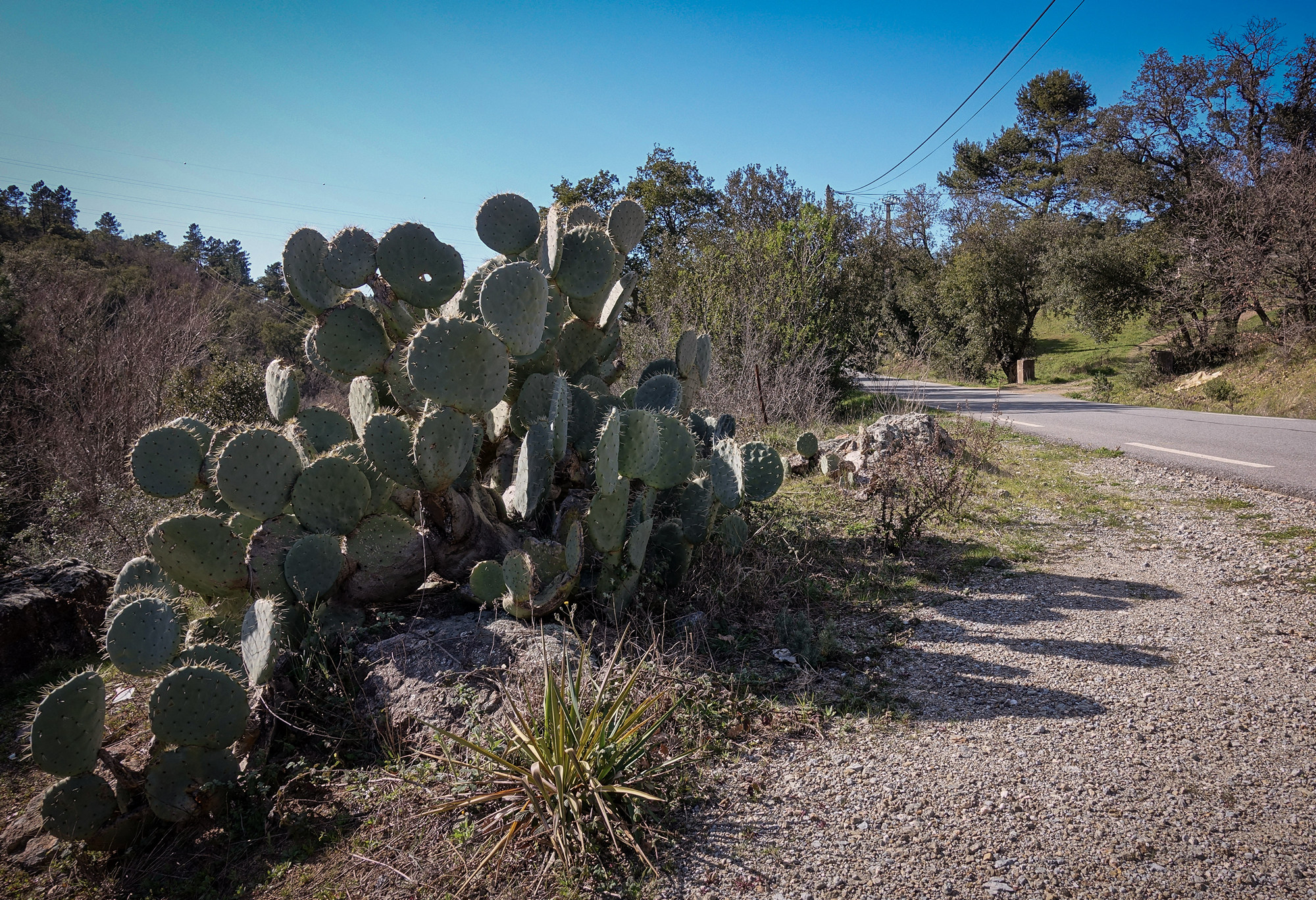 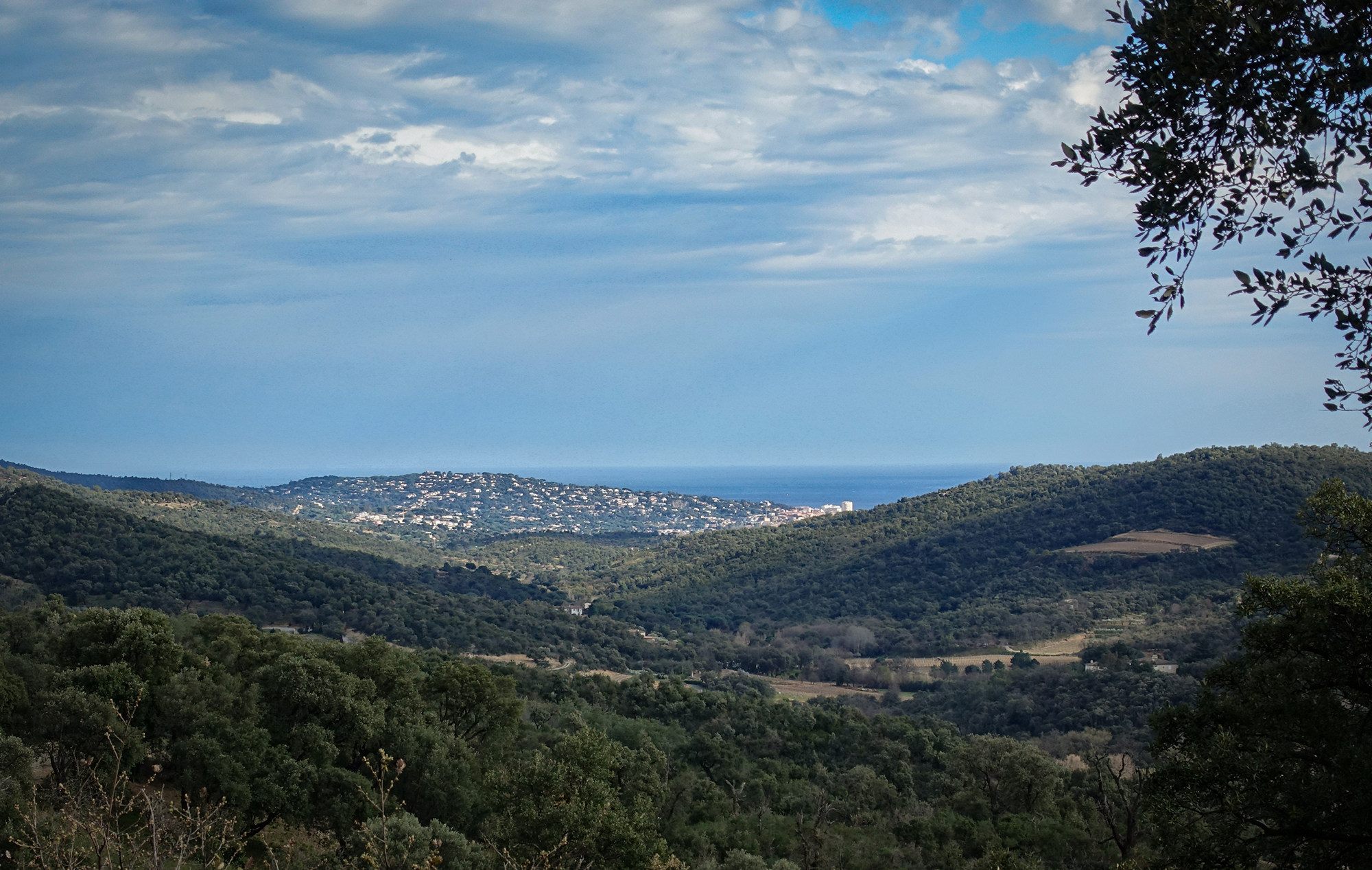 It was slightly undulating, with no steep climbs. It joined another road that followed Le Vallon des Prés nearly all the way to the sea, also without any traffic on it, and the amazing thing is the wind was behind me all that time, even climbing up over the range of hills. Now I’ve come into Sainte-Maxime, and it’s not that attractive a place to me, just a typical resort.

It’s lovely and warm sitting in the sun by the marina, but the air is quite cold I think, particularly here near the sea. I’m really hoping that wind is not going to be in my face on the way back too much. I’ve just eaten my squashed sandwich and have put my arm warmers on. I’d like to sit here longer in the warm sun, but I need to press on as it’s getting late. Time to ride along the coast. 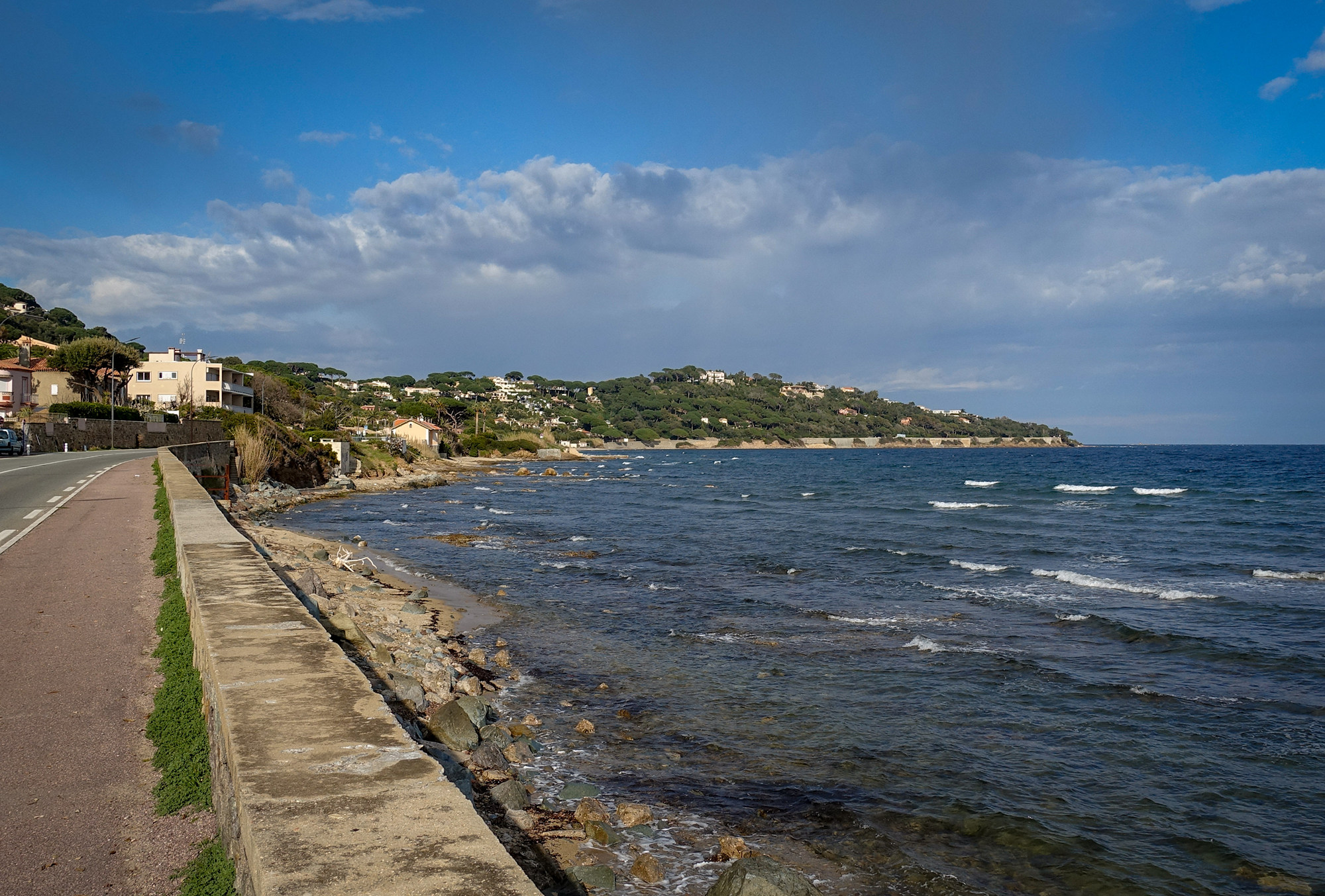 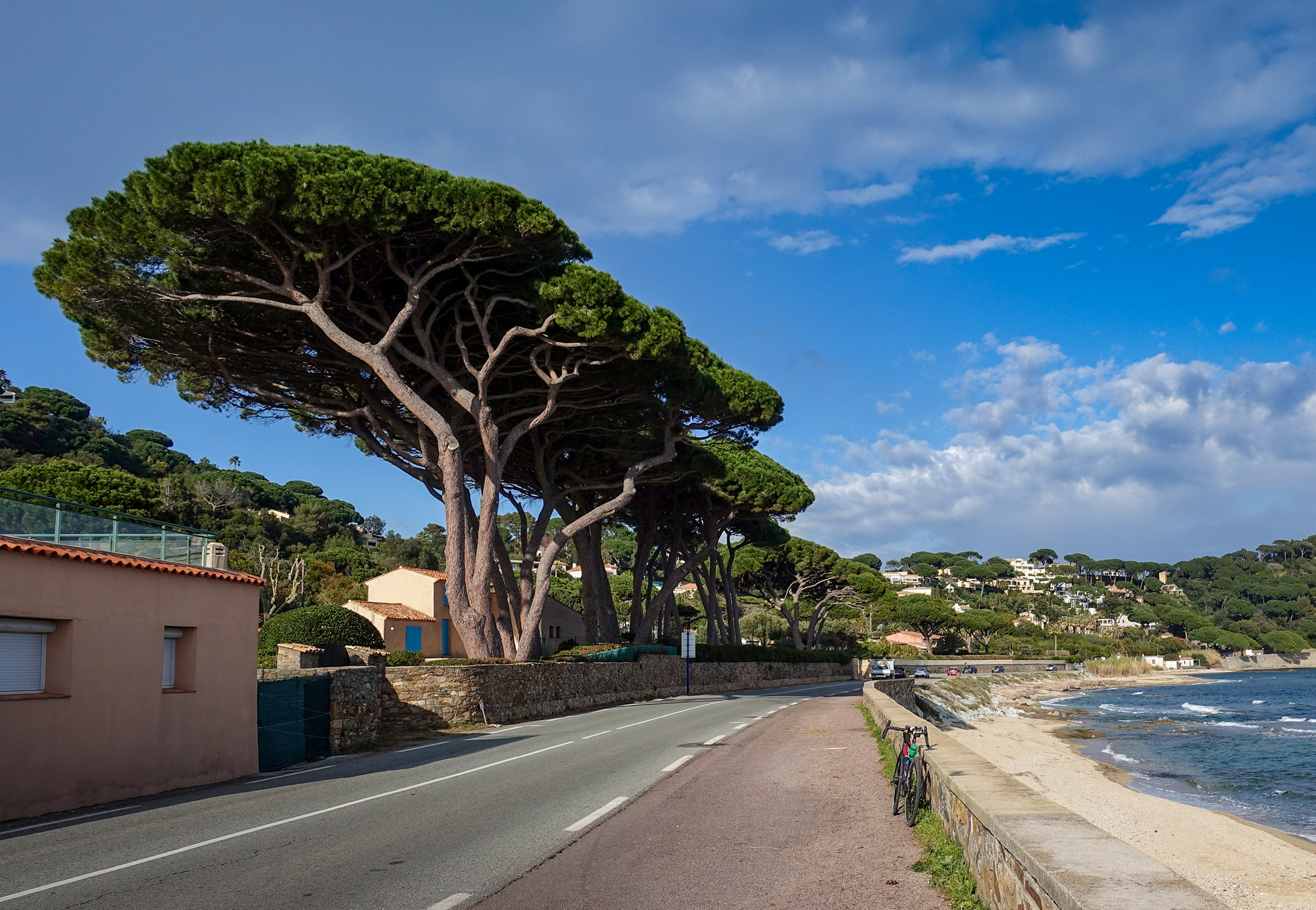 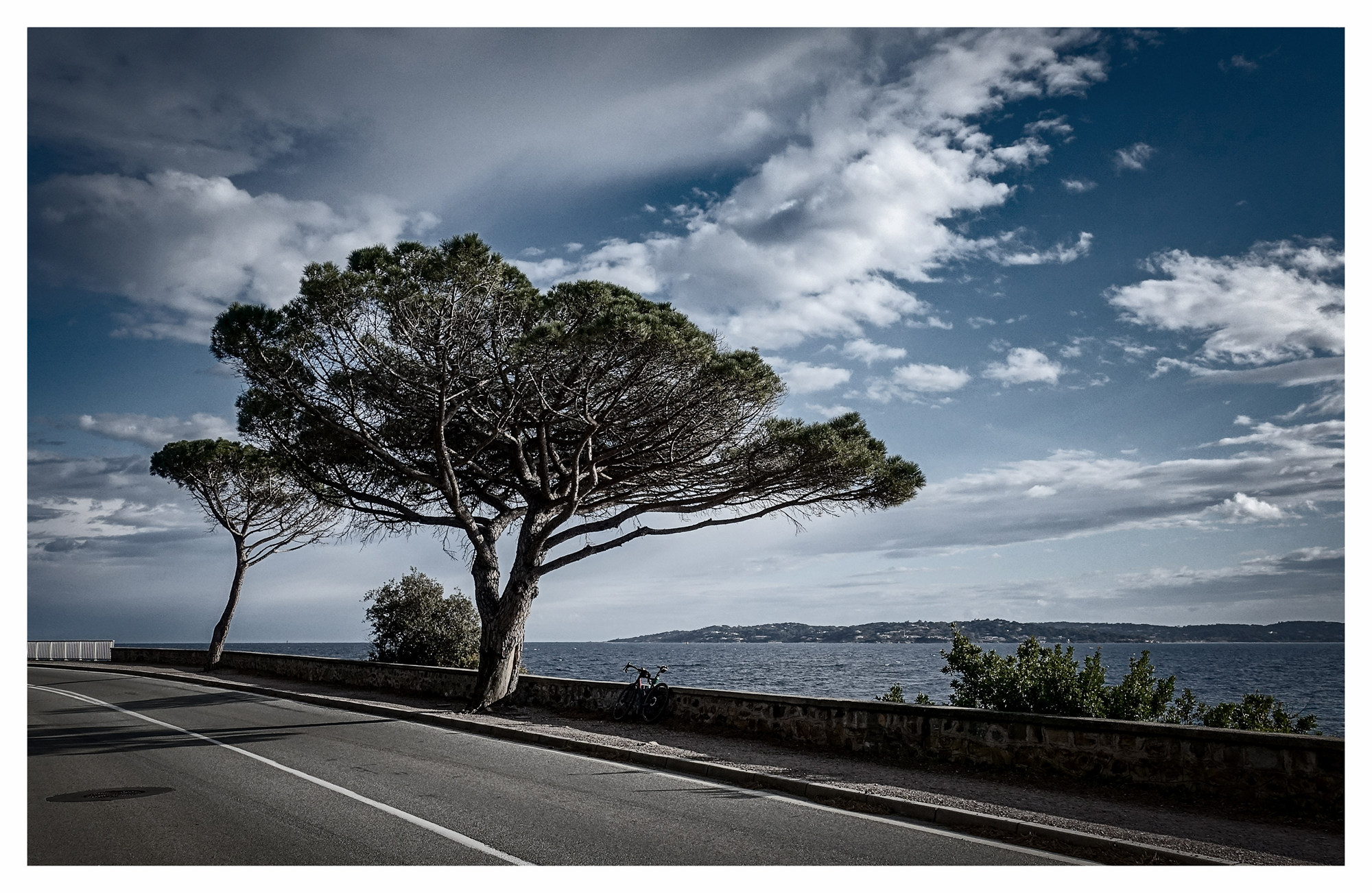 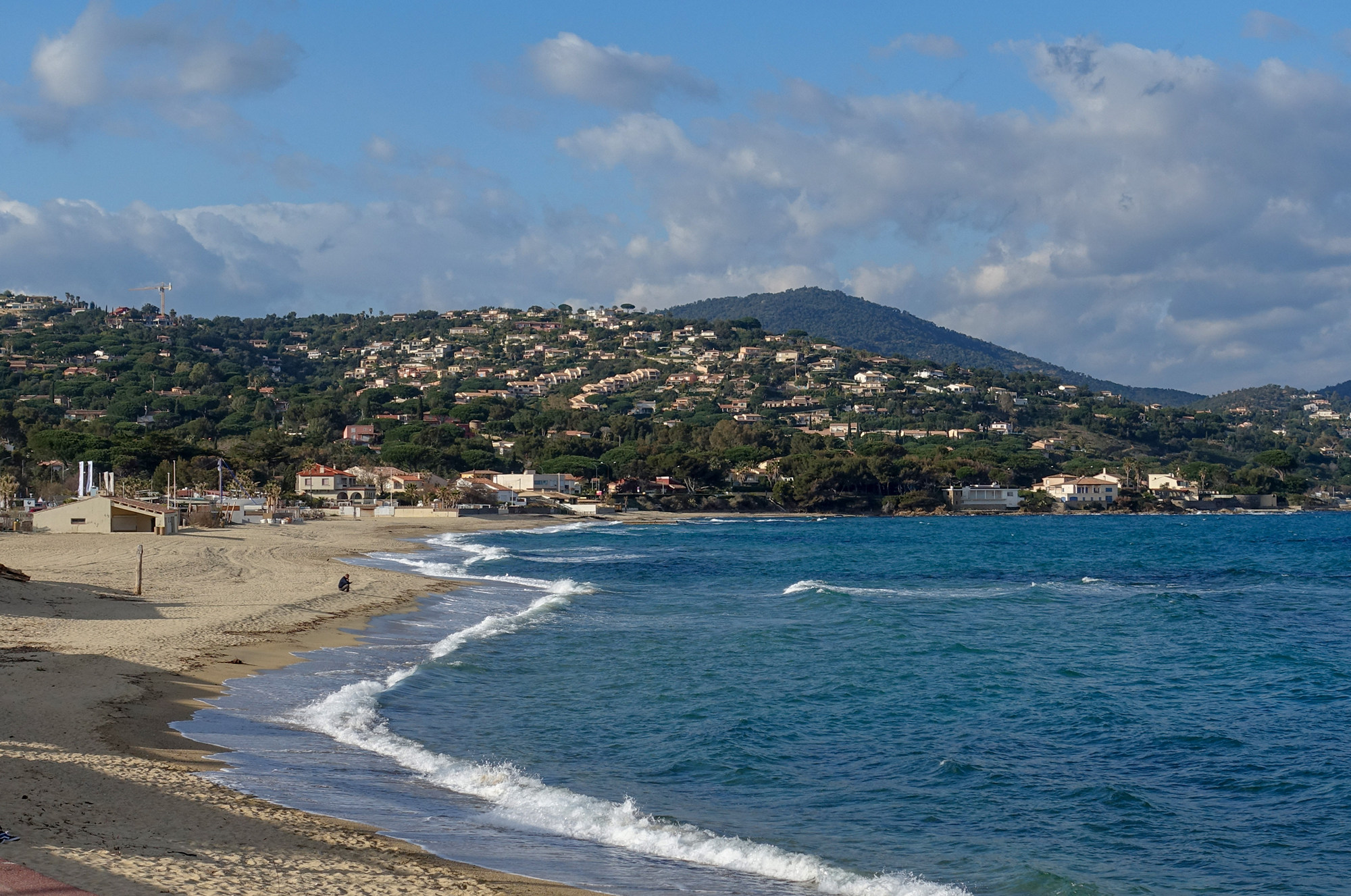 This report coming at the end of the ride. After that last report, the road wound its way around the shoreline. Once out of the built-up areas it was quite pleasant, especially where the coast was more rocky. But the road was always reasonably busy which took a lot of the fun away. And it was cool, definitely cooler by the coast. On the outskirts of Fréjus, the road turned inland. The following stretch, for about seven miles along the D7, was very busy and therefore noisy and not particularly pleasant. There was a bike path and it wasn’t in bad condition but I didn’t get away from the fact it was so noisy.

Eventually my route turned off the main road into a side road which was absolute heaven because it was so peaceful. Unfortunately the first section of it was about the worst conditioned road I’ve ever seen in France. Luckily, that only lasted a mile or so. The road wound itself through the forest. 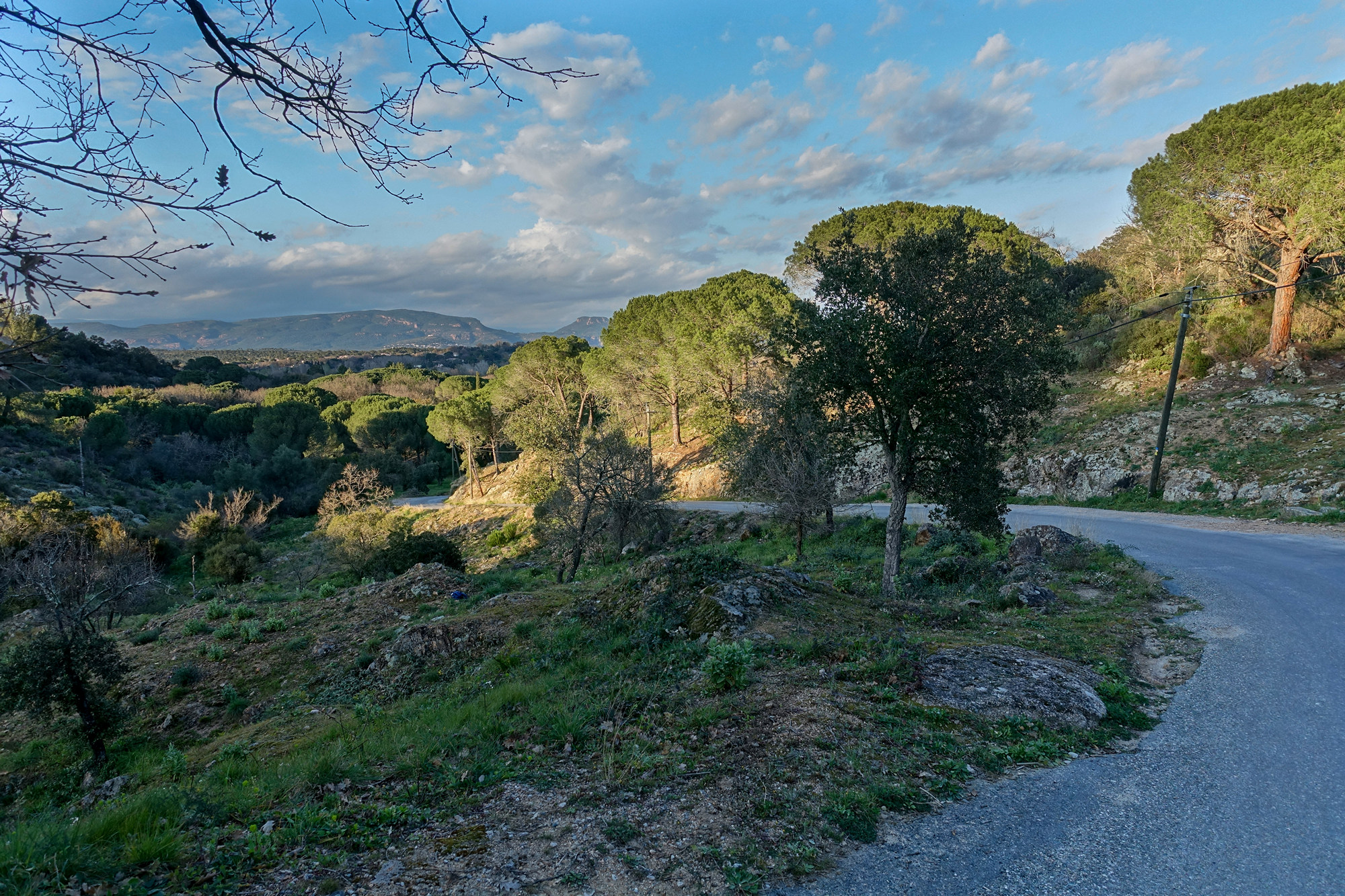 I knew there was a climb coming up at the 45-mile mark, and it certainly did come. The climb up over the hills in the forest was very steep, but still I was happy to be off the main road. I’d much rather be suffering physically on a lovely peaceful road through the woods than suffering mentally dealing with the noisy traffic.

It was so peaceful there I’m pretty sure I could have heard a pin drop ahead of me. The only noises were birds gently twittering as they got ready to turn-in for the night as the sun went down. I had expected the climb to be about two miles long so it surprised me when it seemed to keep going on a bit. Eventually the top was reached and it went into just as steep a descent. By now the sun was low in the sky and it was quite cool. I stopped and put my rain jacket on to guard against the the chill factor of the descent.

Most of the roads through Le Muy and beyond were reasonably quiet. At one point I tried to put my back light on, but it wouldn’t come on for some reason, so I just ignored it – it wasn’t really that dark anyway. In fact I still saw one car come past me without lights on, even though the sun had gone below the horizon.
Burbling its way through a backstreet of Le Muy came a white 1966 Ford Mustang GT, looking like a giant version of the Dinky toy I had as a kid.  Nice. There was a beautiful sunset and I had to keep stopping to get various pictures. 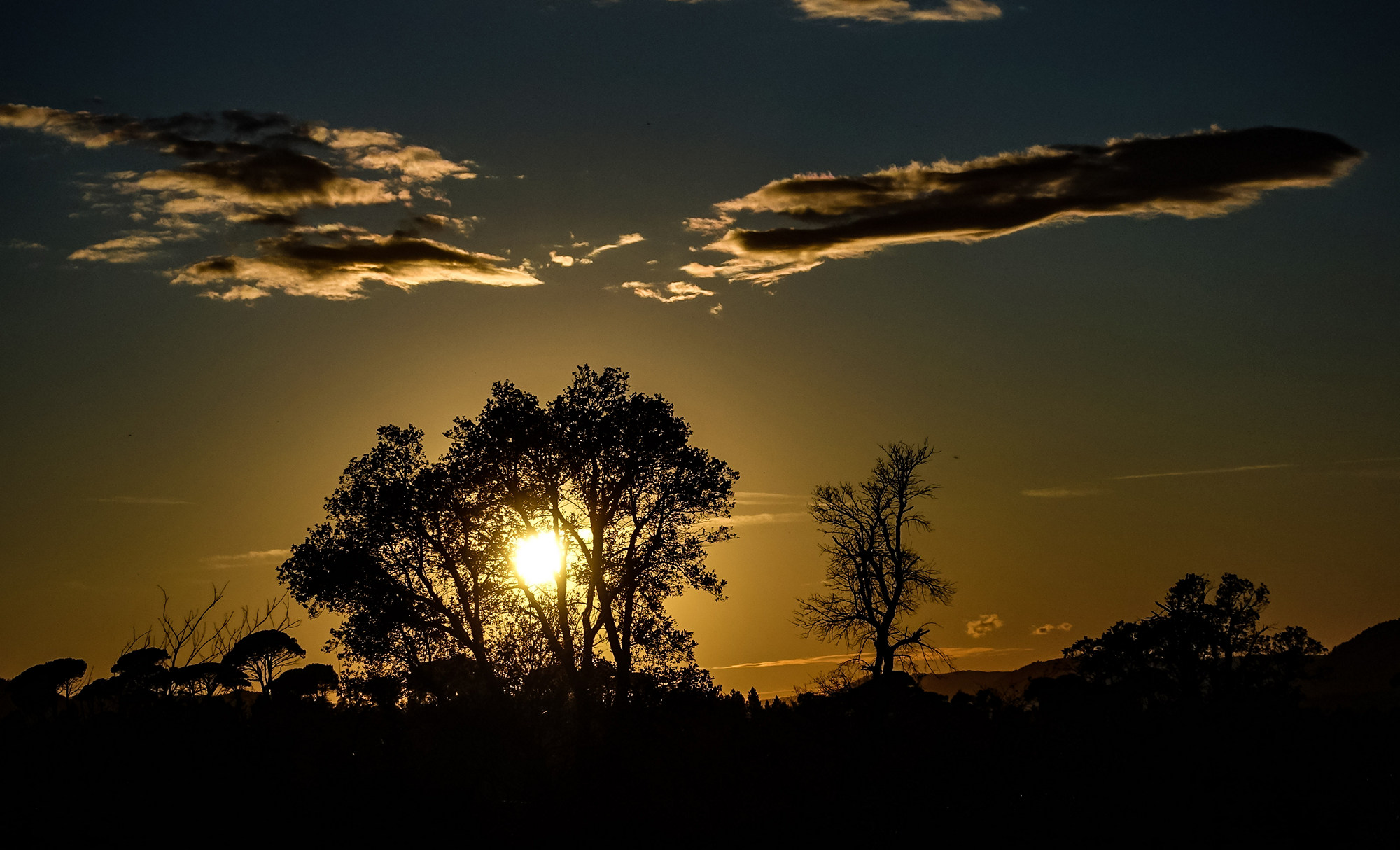 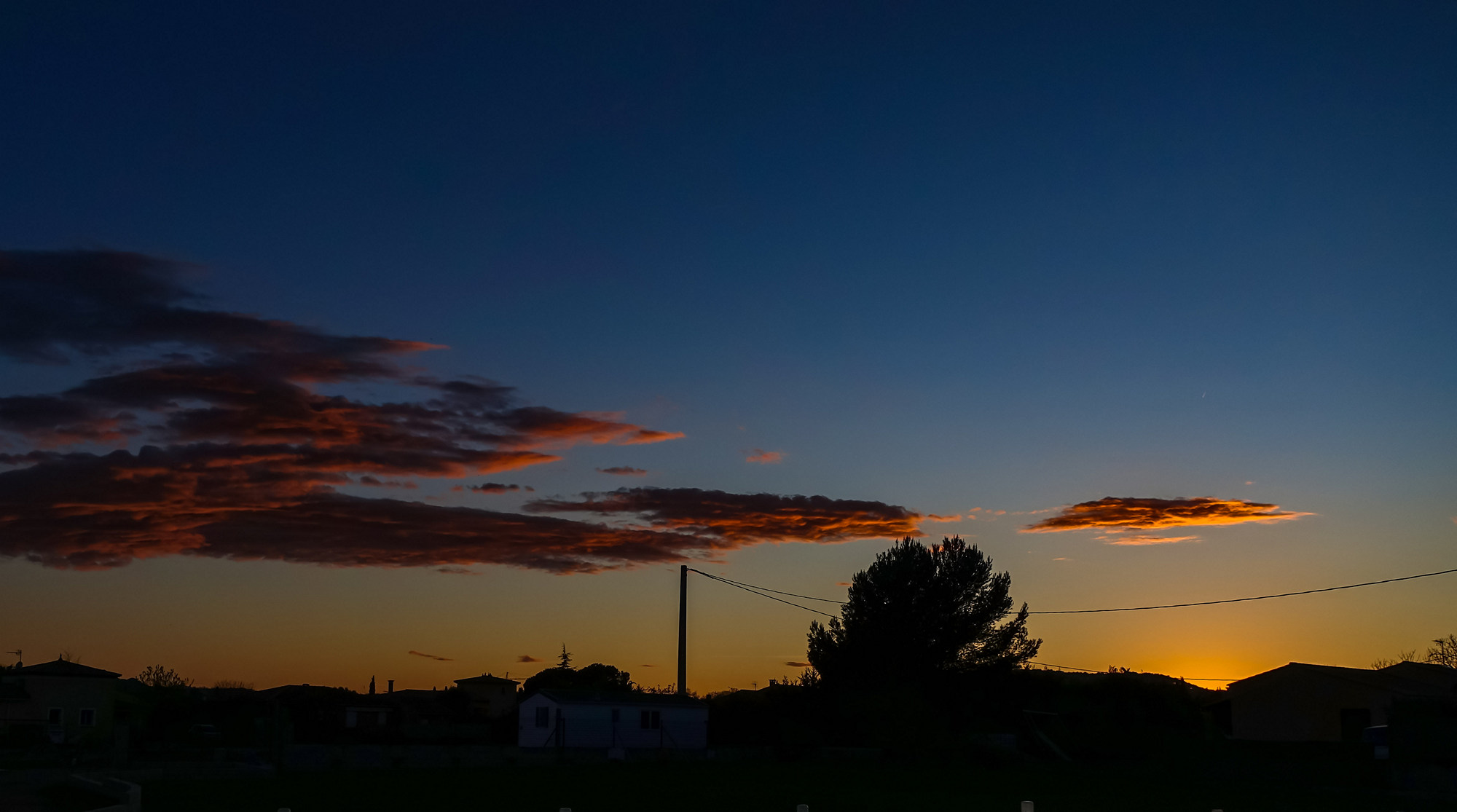 Pharmacy temperature readouts earlier in the ride were saying 14ºC, but as I came into La Motte, the pharmacy temperature display there said 11ºC. My hands were cold and I was a bit uncomfortably cold but my feet were nice and warm and my legs were ok even with only shorts on.