A slightly new format for this post. I ‘wrote’ the whole thing at various stops whilst on the ride, by using voice recognition on my phone. I’m normally composing the blog in my head as I ride along. So I decided to record the whole thing this way at the time, to avoid having it clog my head up. 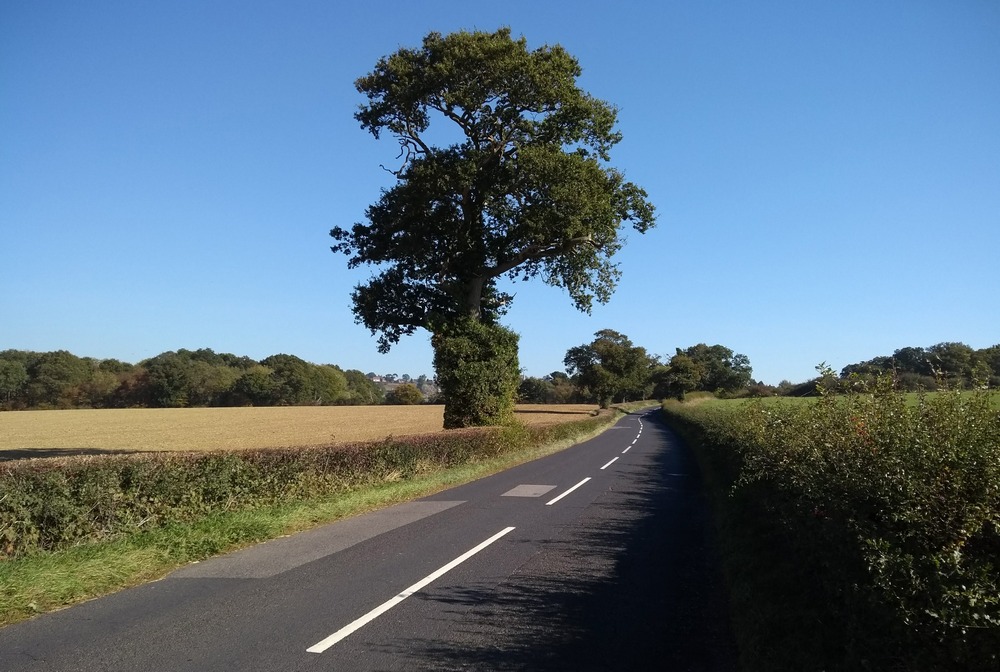 Written at 24 miles
It was a beautiful hot sunny morning. And it needed to be if I was going to be able to drag myself out the door this morning. With a recent complete lack of mojo and general malaise that I’ve not unreasonably identified as depression, it would take all my effort to do anything other than just mope around doing nothing. My antidepressant of choice is cycling. Let’s look at the ingredients:

And so I managed to get myself onto the bike and peddling. The day is exceptional, not just because it’s October. It’s a glorious day anyway – not a cloud in the sky and with a southerly breeze bringing hot air off the continent it’s about 23°C.

Into the journey I keep wondering how long it will take for my depressed mood to lift –  don’t know yet. I’ve stopped at 24 miles to record this and it’s probably getting better I suppose – my head is not as filled with thoughts spinning around as it was when I first left so I must be getting into it. As I record this, having stopped for a banana, I’m standing by a gate somewhere near Ashford and I can feel the sun burning into the back of my legs – just an amazing day for October. 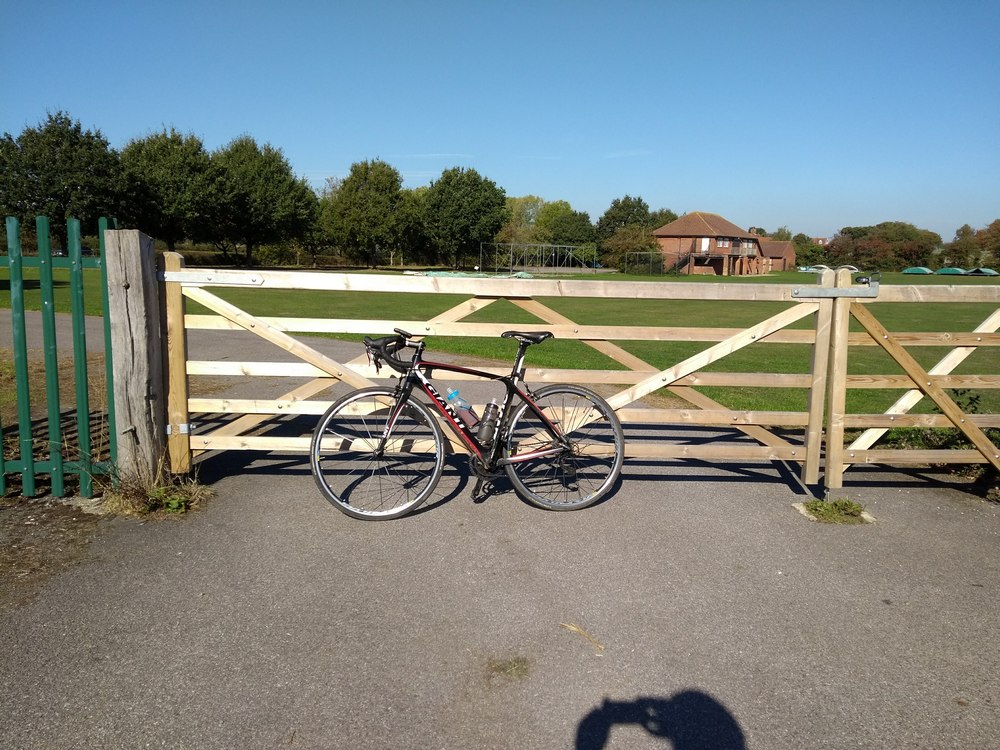 In those ‘ingredients’ above, one thing obviously missing from the list is any meaningful interaction with people, which is also known to be good for you, but I’m not really in the mood for it. In fact I brought a sandwich with me so I wouldn’t have to ‘interact’ with anyone in a café! Not that it would have necessarily been ‘meaningful’!

Written at 37 miles
Have now arrived in Dymchurch. Since the last stop the riding into the increasingly strong southeasterly wind became more and more of a problem until I reached Hythe and turned West and then it was great to have the wind behind me. I had thought that I would be riding a new route for me, in the form of Donkey Street, but when I got there I recognised it from the audax back in June. Here at Dymchurch seafront the wind is very strong and it’s now obviously several degrees cooler than it was inland, so I can’t wait to get going again. I’m just having a quick sandwich and will soon be heading back, hopefully with the wind behind me. 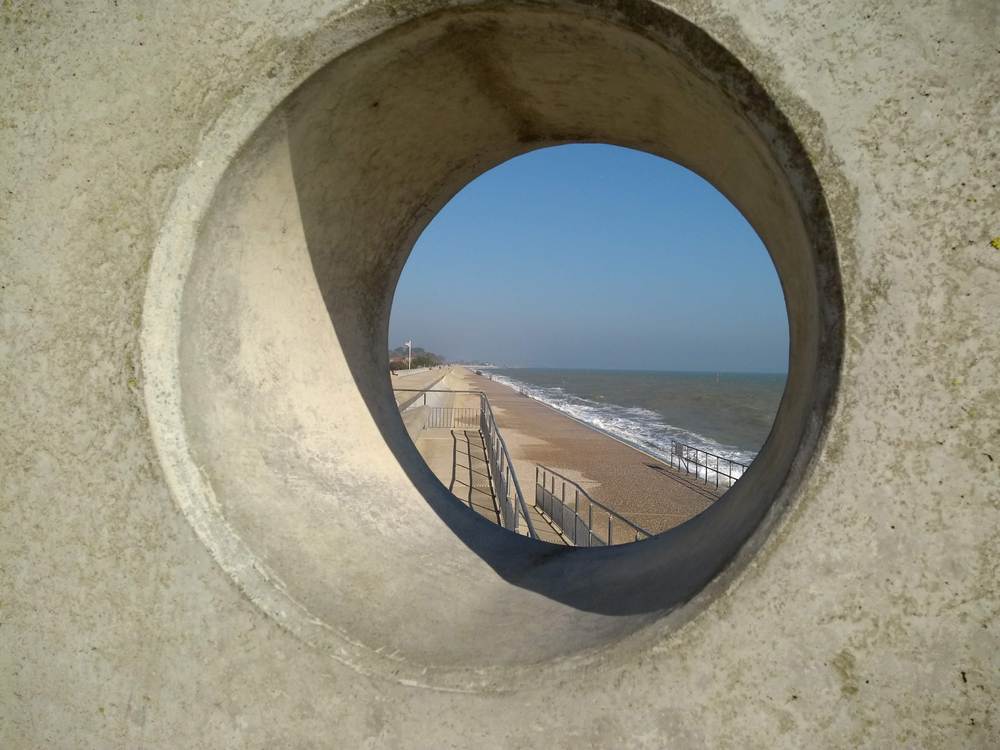 Just had a thought – one other advantage and one of the good things that I realised that I’ve done today was to actually write down, in the form of this blog, about my depressed state, because that’s obviously another good thing to do – get it out of your head both in terms of acknowledging the depression but also writing it down which is getting it out of my head – so immediately after that last blog entry my head was clear of it because I didn’t need to think about it once I’d got it out there. Interesting. 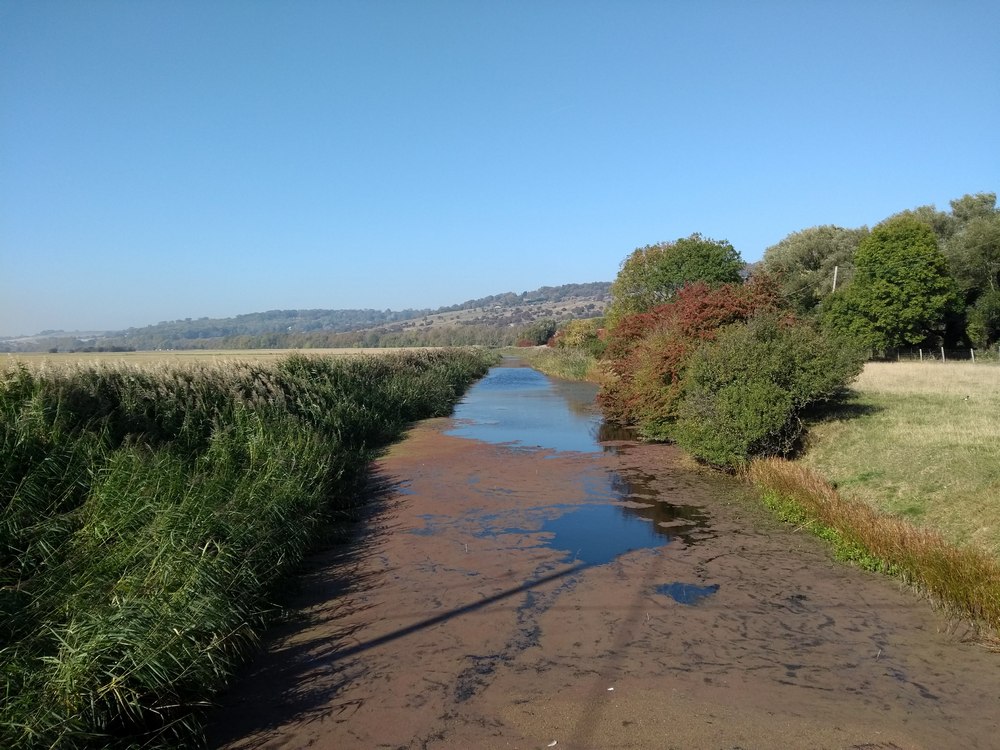 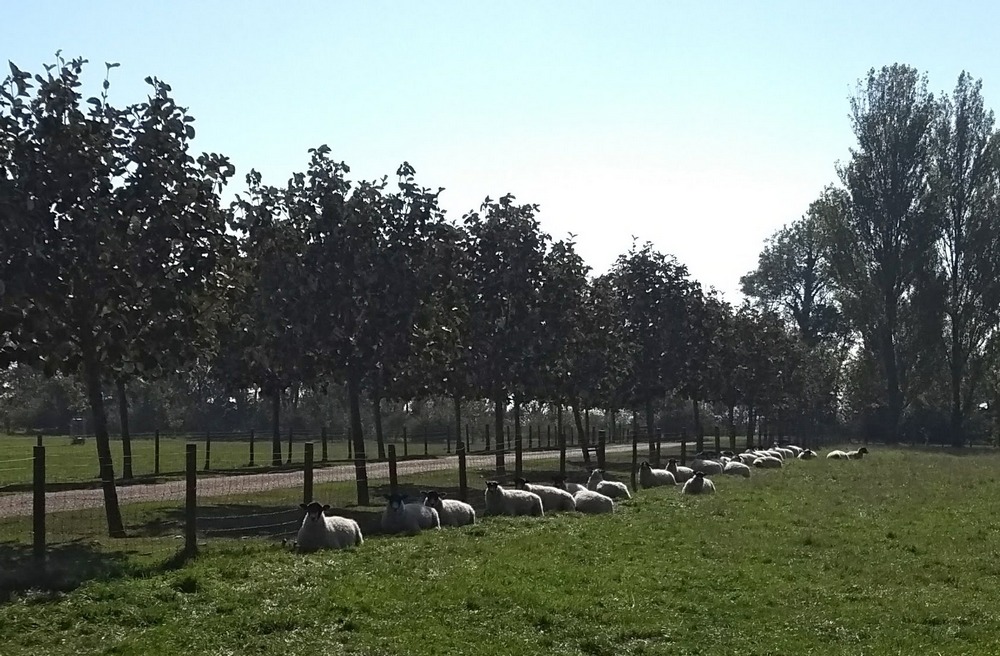 Written at 60 miles
I’m at my last stop, standing by another gate, somewhere near Frittenden to have my last quarter of a sandwich and some sort of energy bar thing. In terms of the other stuff I was thinking about, I’ve gone pretty numb now – it’s just become a bit of a slog going home. Another thing I realised about why it’s become a bit of a hack is because I’ve got a cold at the moment so I think that’s kicking in too – sort of a bit of lethargy creeping in, but my brain has gone quiet if that’s the right word for it.

Written at home afterwards
It feels a bit weird having written about depression. I’m no expert, having never suffered it to any degree for the whole of my life until now. There is an identifiable reason for mine now but I don’t want to go into that on this blog. I think depression has a bit of a stigma attached to it. Being depressed is not cool. It’s not attractive. If I admit I’m depressed, people might steer away from me in case they ‘catch’ it! To some extent I think that’s true. In the same way that positive actions/thoughts can rub off on others, who wants to hang around with Marvin the Paranoid Android? (do you know, and this will sound ridiculous to many, that’s the first time I have associated that character from Hitckhiker’s Guide with the Radiohead track! Jeez – how did I miss that??). Equally the last thing I would want to do is go out and buy a book in which Stephen Fry or whoever is talking about their depression. Having said that, I do strongly believe that writing about it is a really good thing to do. Not that anyone except oneself will necessarily read it, but just to get it ‘out of your head’ which helps you to acknowledge it, perspectify (ugh!) it and deal with it as something that exists ‘in the real world’.

Bloody hell – I thought this blog was supposed to be about bikes! Yeah, sorry, I’ll get back to that next time, and hopefully will use the ‘live commentary’ approach again.

Cameras are better than phones
Used my new phone with 10 gazillion mega-pixel camera on this ride. Shots are not as good as with my camera. Makes sense really. Why would all those photographers at the side of football matches use such massive lenses if all they had to do was just stand there and point their phone at the pitch?
Something wrong with handlebars on Giant Defy
Not sure what caused it but arrived home with a very painful right hand. Could have been new mits which felt uncomfortable at times. But I also noticed that the brake hoods seemed to be quite a stretch for me while riding. Maybe the bars have slipped or something. Same thing happened on Exmouth Exodus 2017.
Busy empty roads
Another one of those rides where there was hardly any traffic – but what traffic there was conspired to get in the way! Pull up at a junction to find the only car passing that day is coming along so you have to stop! At another point I decide to take a photo on a completely deserted road only to find that vehicles from both directions appear from nowhere and have to give way to each other to avoid me and my bike standing at the side of the road! Etc, etc. Frustrating. 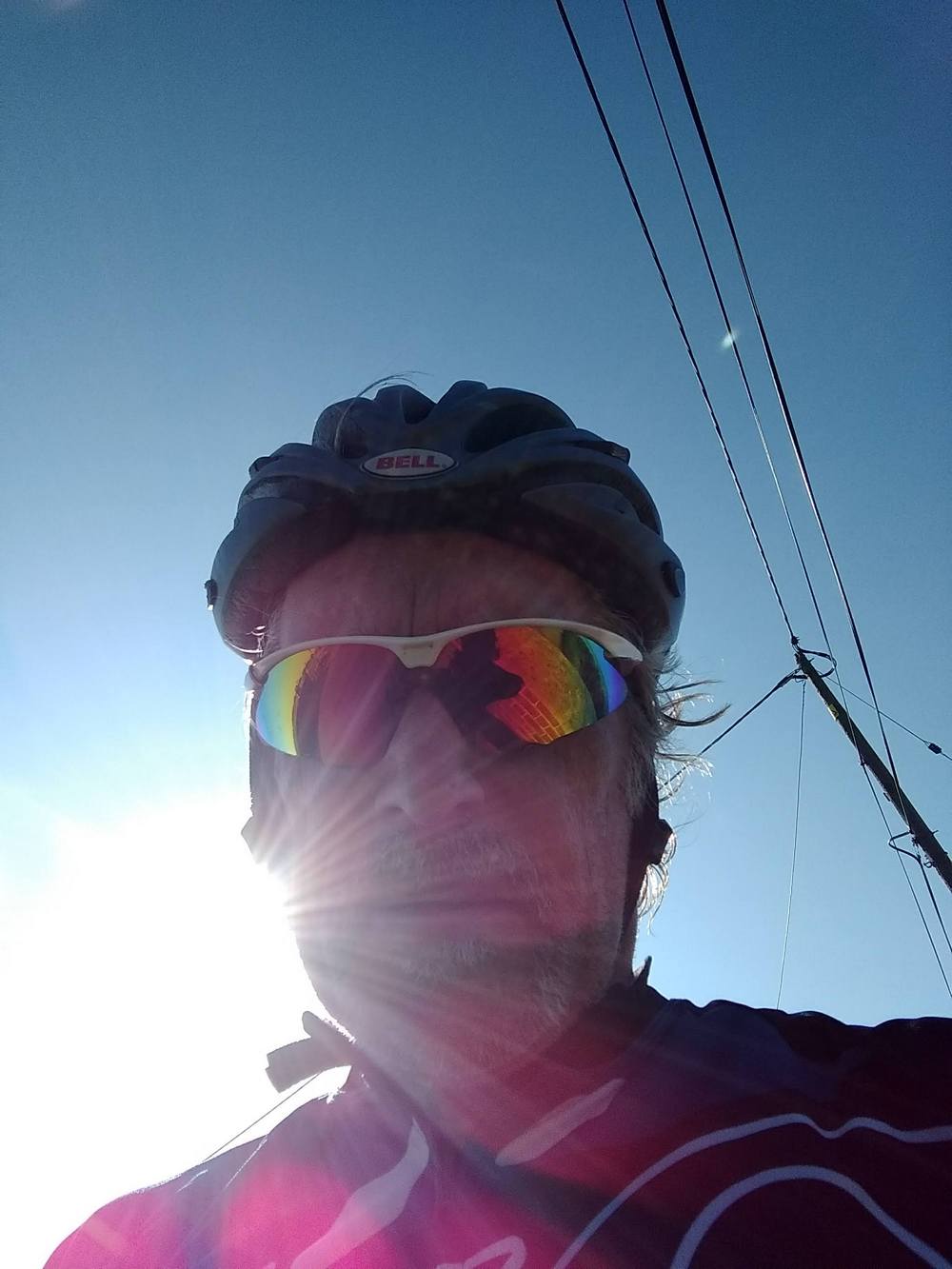