Mont Ventoux has been on my list of things to do ever since, a couple of years ago after one particularly hilly ride, a friend of mine quipped “Are you training for the Tour de France?”, to which I replied “No I’m training for Mont Ventoux”. It was said almost in jest but I became more and more fascinated with the Giant of Provence. I’m not going to give any history of the place here – there is so much already available on the web.

It was difficult finding out how tough it would be. Figures for the average gradient varied widely. Even the accurate ones were scary – several miles averaging 9-10% through the dreaded forest section. To get that in perspective I compared with the local Yalding Hill which averages 9% over a mere third of a mile! And that is a hill that I always find a complete slog. So it seemed that Mont Ventoux, or just one section of it, would be the same as Yalding Hill but twenty times the length! Hmm, that sounded tough. 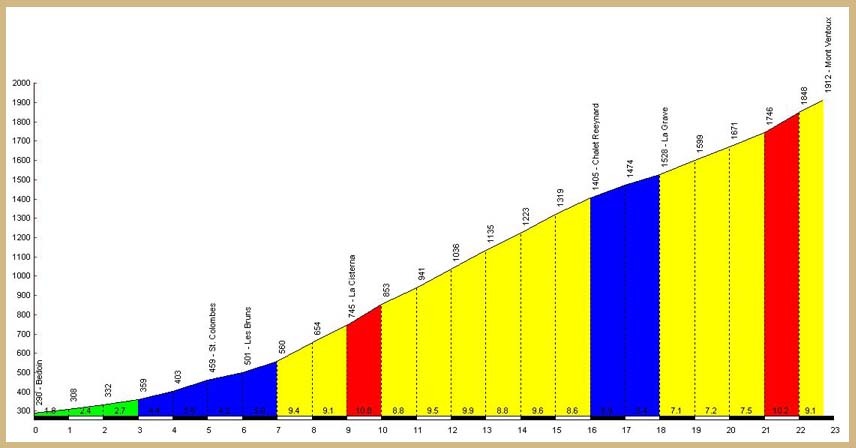 Enough with the numbers, I thought; let’s see how people had managed and what they thought of it. On the one hand there were quotes from the likes of Lance Armstrong calling it the toughest climb in the race (TdF); Tom Simpson’s tragic death so near the top; other famous riders nearly passing out at the finish, etc. But all these had been racing up there. On the other hand I read reports of people going up there on tandems, on recumbents, on Raleigh Choppers! An eight-year old had done the climb. Hell, someone even did it on a Boris-bike! “How difficult can it be?” I kept asking myself. But then the devil on my other shoulder kept murmuring “Yalding Hill times twenty”.

The one thing I did know is that I had to do it in one go, without stopping, otherwise I wouldn’t be able to say that I had done it. I realise that everyone has different measurements for success but this is a hard-and-fast rule of mine.

The opportunity to do it finally came as a by-product of taking part in the Cyclotour du Léman. Looking at the map, I saw it was less than 300 miles further South. It was too good an opportunity to miss. I may never again be ‘accidentally’ this close to Mont Ventoux.

I arrived in Bédoin late on a Wednesday and had to leave by Saturday evening at the very latest. So I had three days on which to do the climb. I managed to park my motorhome so I had a clear view of the peak from the windows. 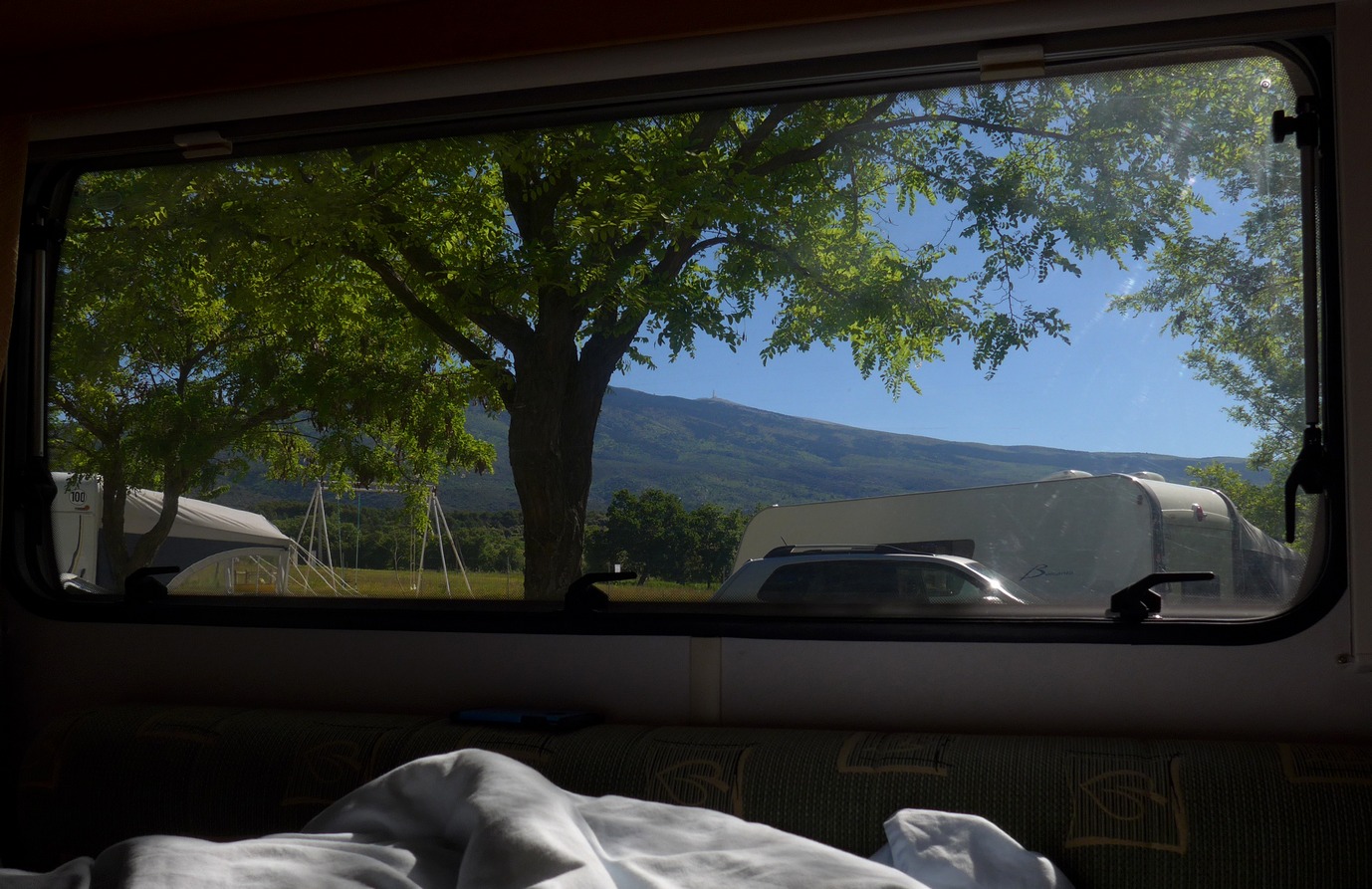 The one thing that definitely had become clear from my research is that the weather on Mont Ventoux plays a significant part in the severity of the challenge. It is both volatile and at times extreme, the wind being the worst factor, reportedly blowing at over 56mph on more than 240 days of the year! That’s why I gave myself a 3-day window. Weather forecasts for the Thursday showed a N or NNW wind, which would effectively be blowing down the slope in the form of a challenging headwind. I didn’t like the sound of that so I decided that Friday would be the day to do it. Later on Thursday I discovered an excellent website that specialises in mountain weather: mountainforecast.com. It forecast that Saturday would be an even better day with a gentle southerly tail wind and a bit warmer at the top. So I decided to defer it another day. To illustrate how quickly it can change, the forecast for the next night (Sunday) was 0°C at the top with a 50 mph northerly wind!

Saturday arrived and the weather was glorious. Not a cloud in the sky. I looked out and saw the tower at the top of the mountain gleaming white in the sunshine. Once I’d got my bike ready I put on some decent kit – today was too special for cheap Chinese stuff! I took two bidons and arranged an open bag of jelly babies in my back pocket so that I could reach in and grab one without having to faff about. I set off at just after 11:00. 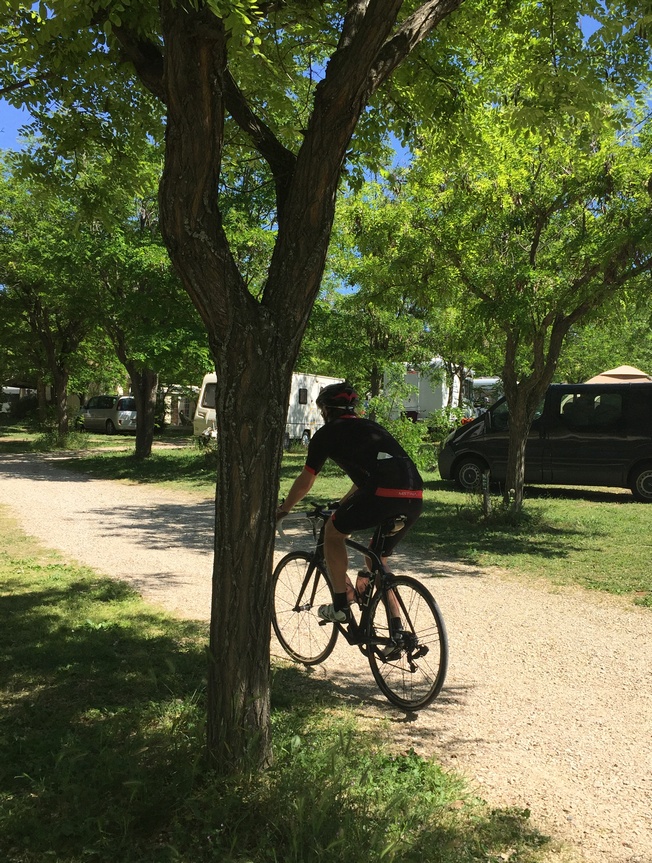 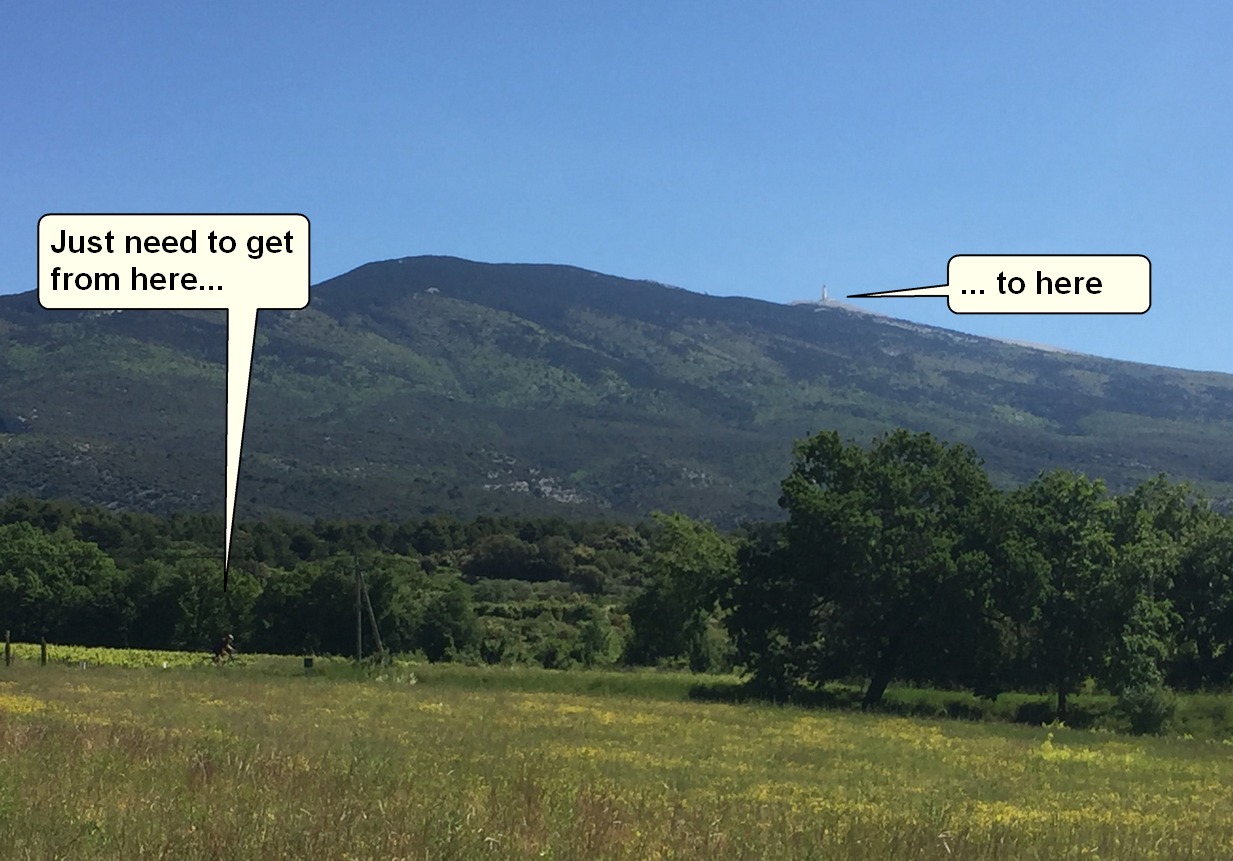 It was a short ¾ mile to the ‘official’ start of the climb at the roundabout in Bédoin. 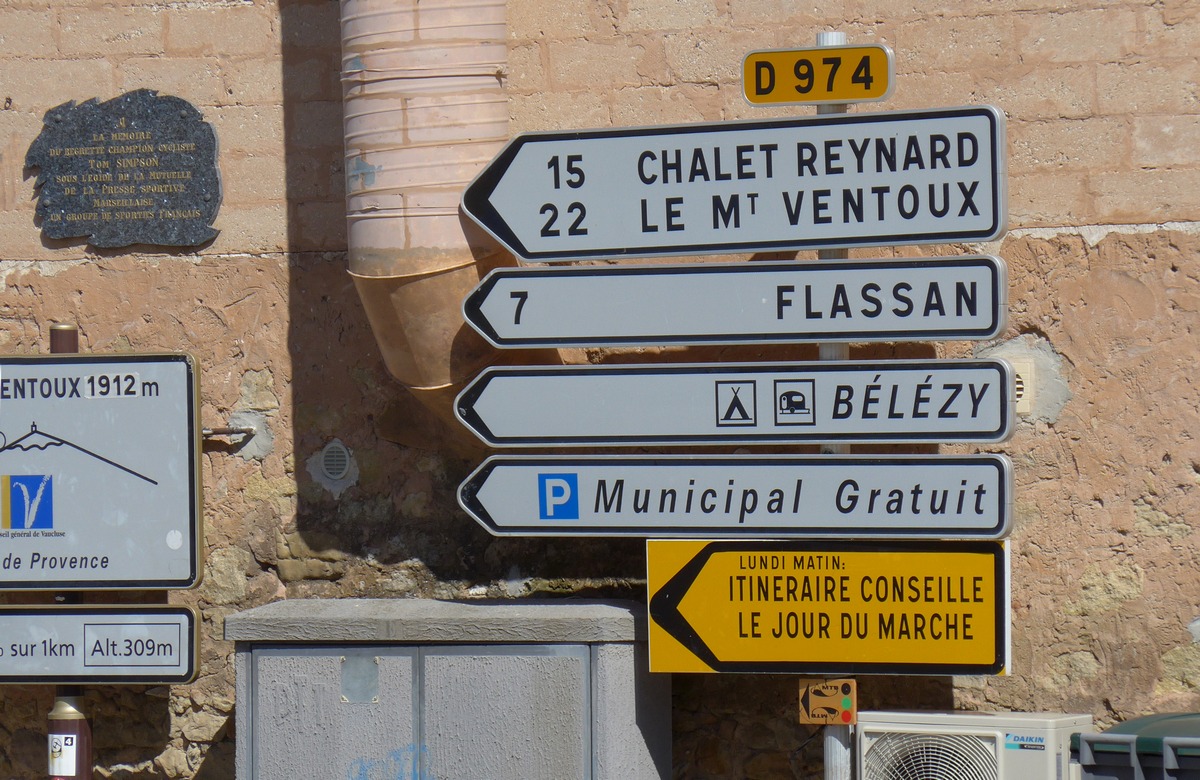 I won’t go into complete detail about it but here are the main points I remember: 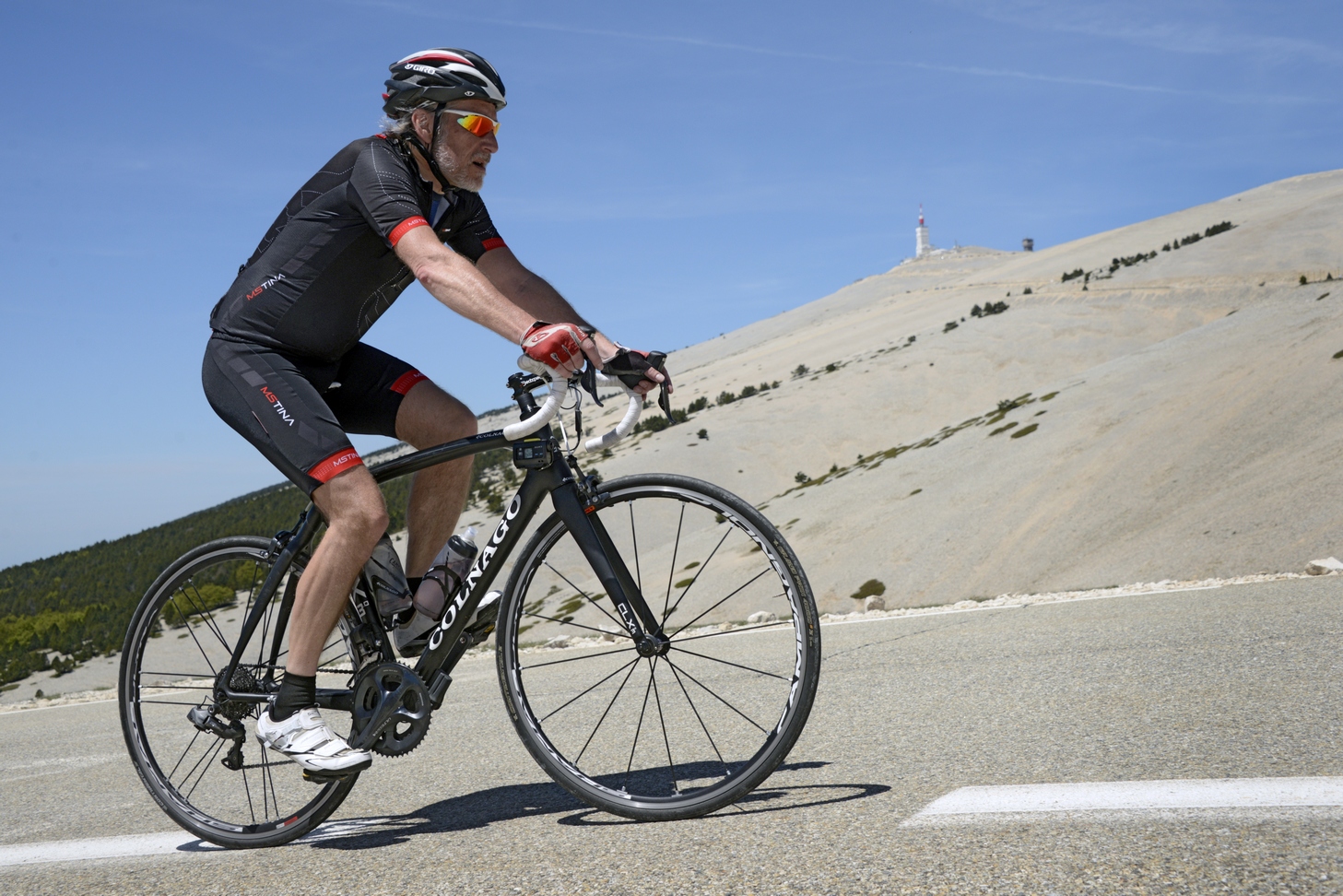 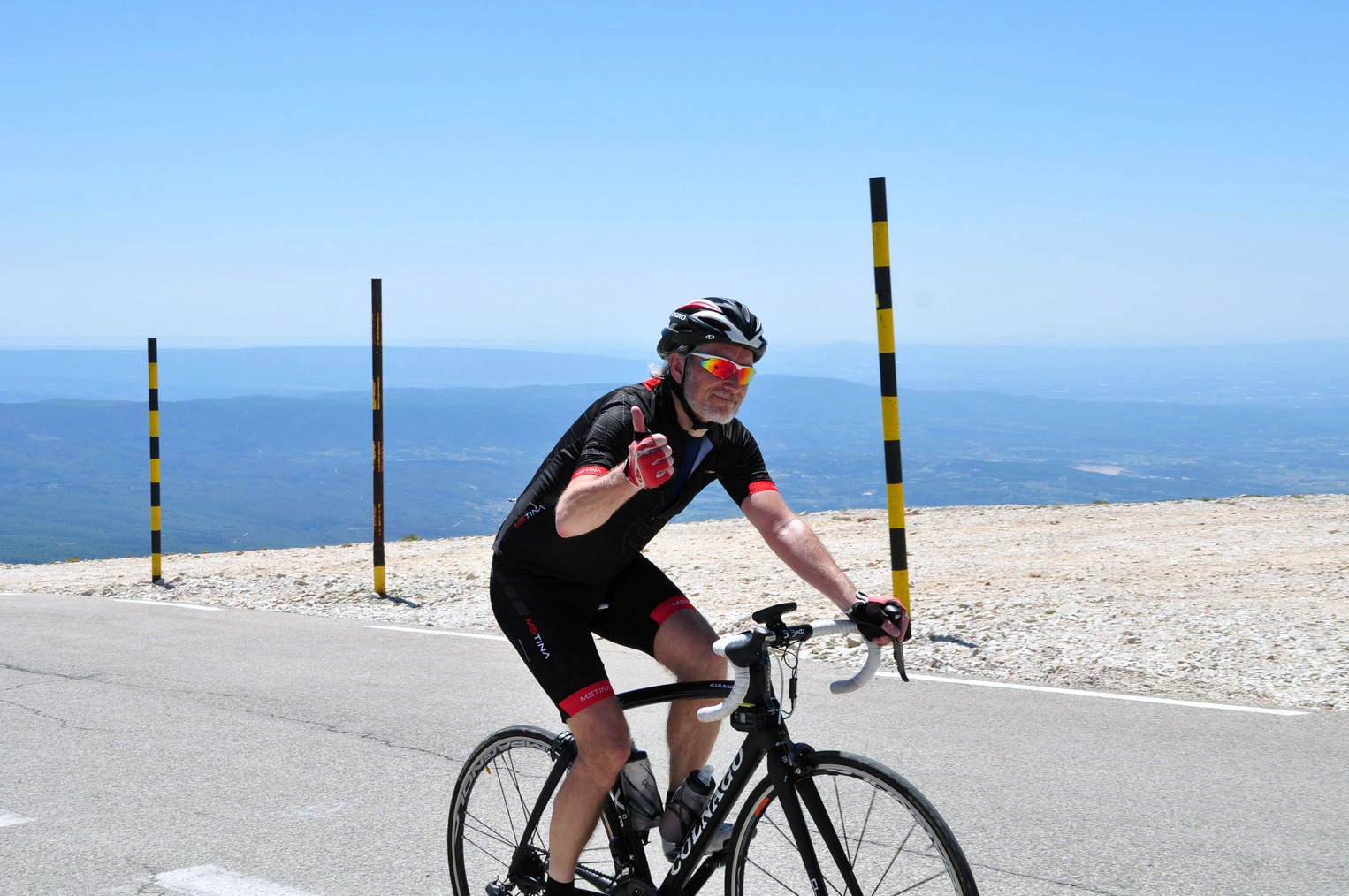 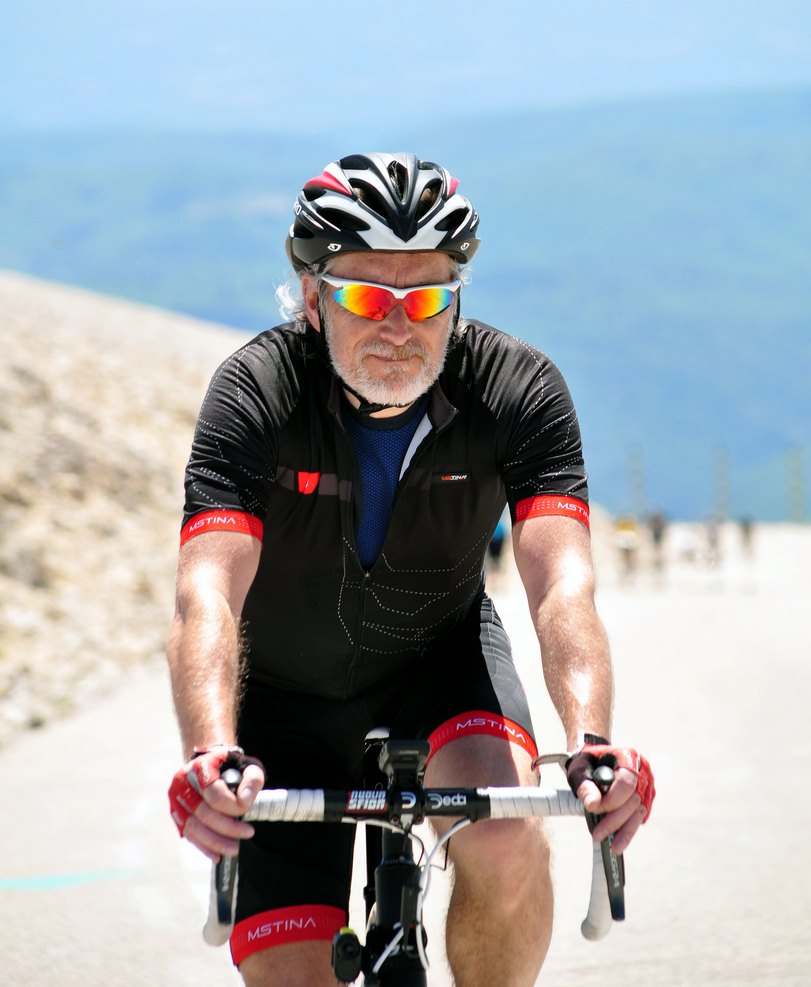 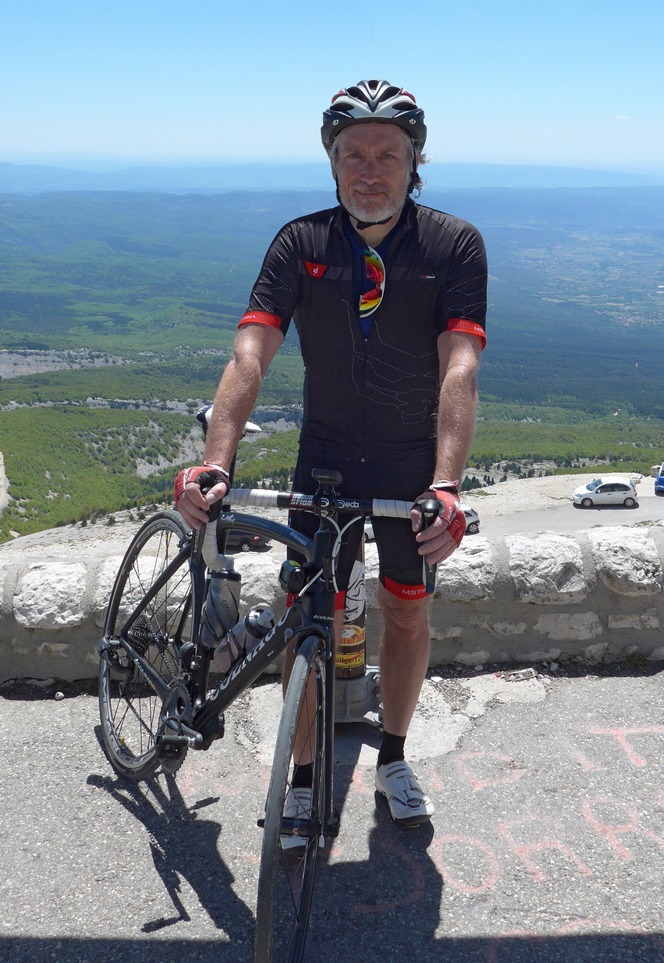