Any doubts about whether yesterday’s ride would ever be bettered were banished by the end of today. For this was simply the most astounding day’s cycling, through scenery that never stopped smacking me in the gob. Even before the ride was halfway done I had run out of expletives with which to bolster my dwindling supply of superlatives.

Still in the Vercors, this ride, like yesterday’s, had been inspired by the same article in Cyclist magazine and followed some of the author’s route. Similar to yesterday I had already ‘driven’ some of this route using Google Streetview. The main attraction of this ride, the Gorges du Nan, wasn’t on the doorstep like yesterday so the first sixteen miles were spent riding to the start at Cognin-les-Gorges.

The first part of the ride included a meander down a lovely straight ‘chemin’, with orchards and open fields either side, and the imposing presence of the Vercors Massif further off to the right. 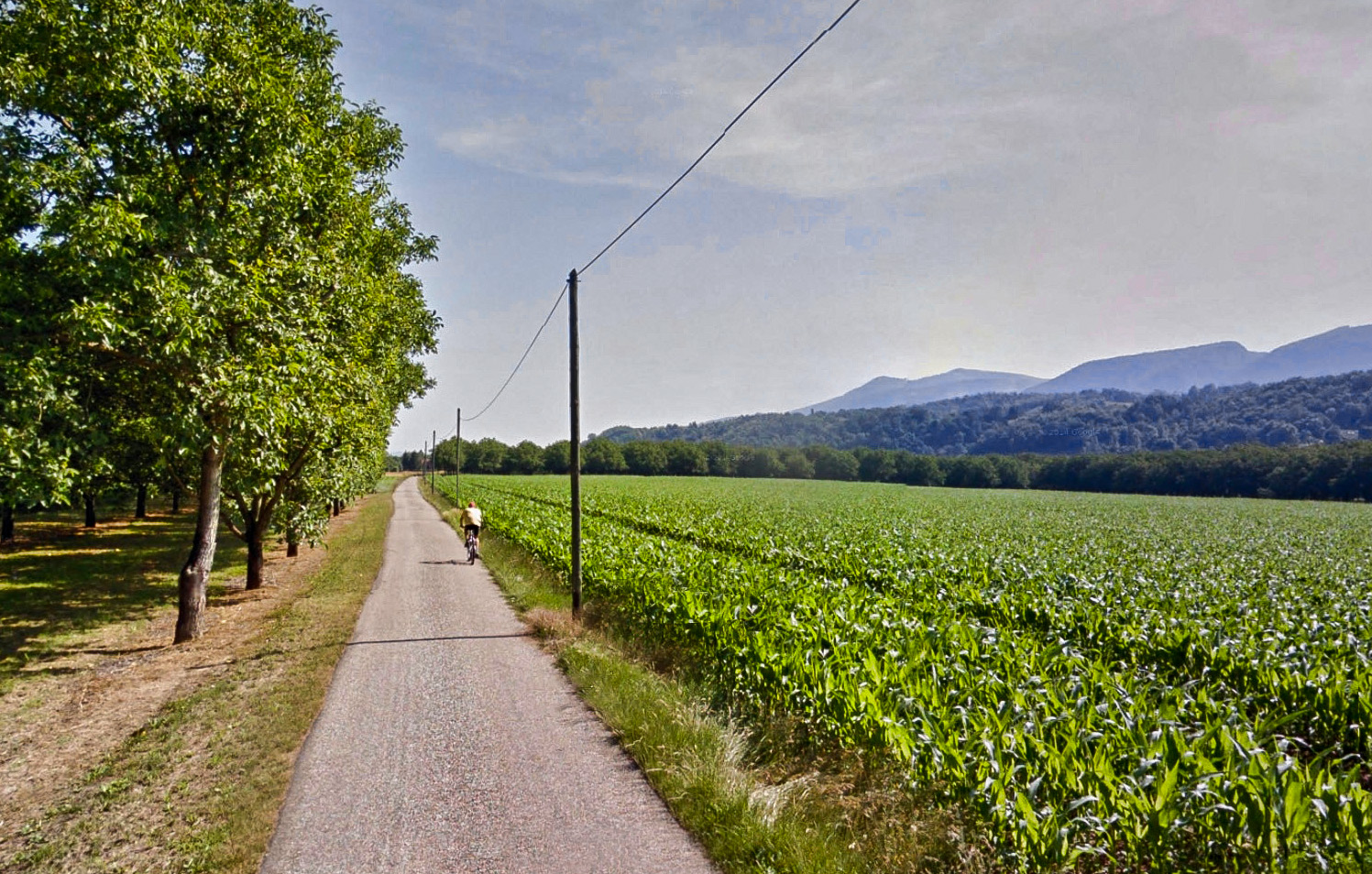 The route was flat as the road followed the vallée de l’Isère, the main river in this region. The chemin eventually joined the main road. Then, as we approached Cognin-les-Gorges the massif to our right got closer, bigger and more, well, ‘massive’! Then there appeared a huge fissure between the rock, the exit of the gorge carved out by the River Nant which gives its name to les Gorges du Nan (I haven’t worked out why the river is spelt with a ‘t’ on the end). 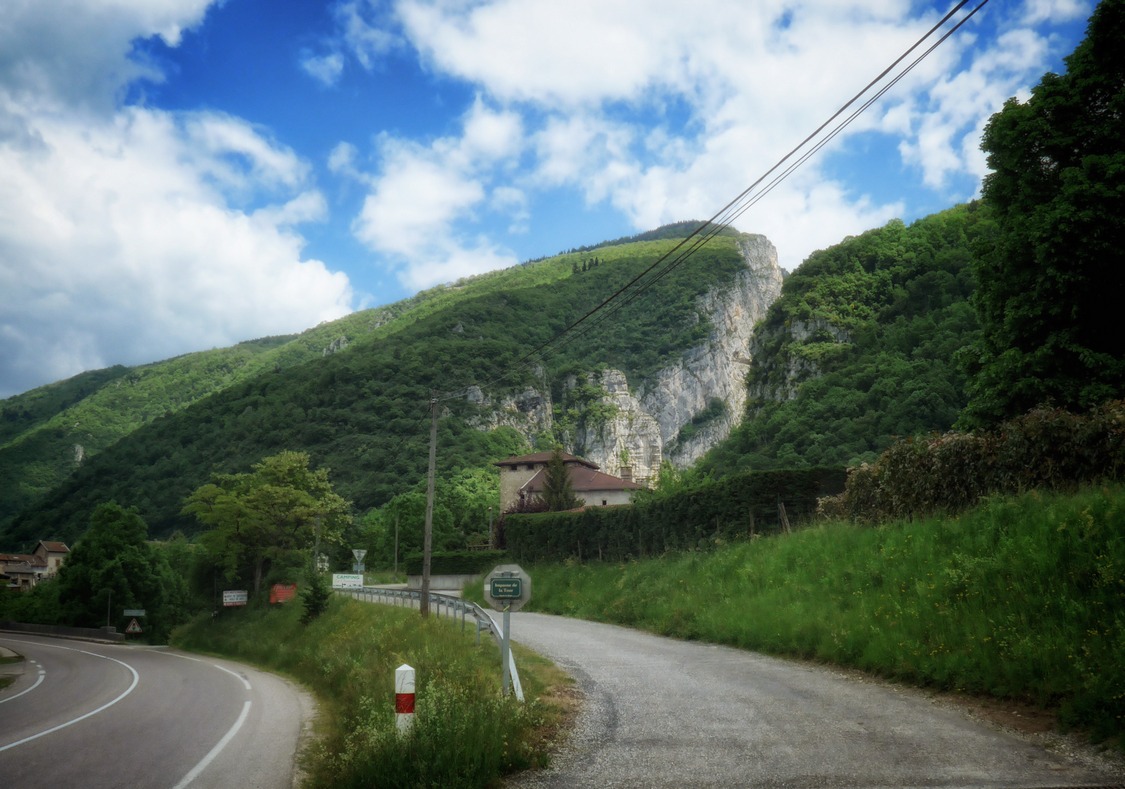 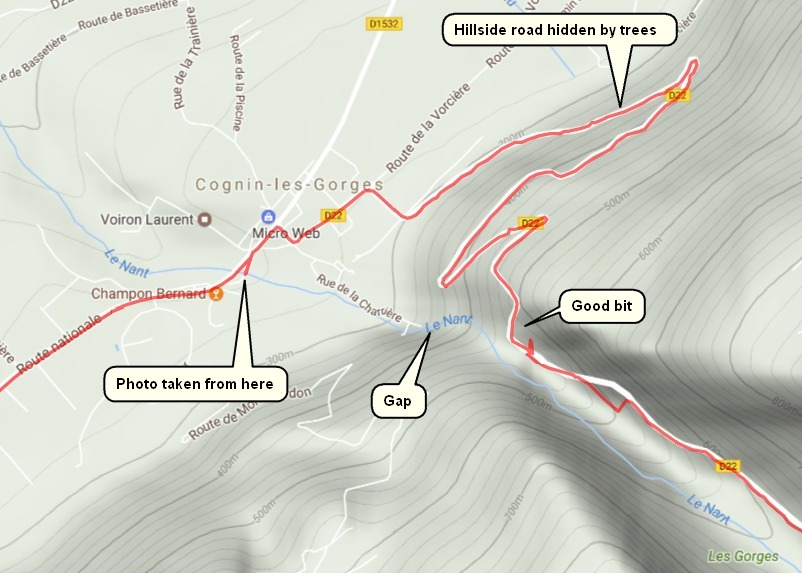 We took a leisurely 25 minutes to do the two-mile climb. The shrinking landscape, just visible through the trees, receded below us as we climbed ever higher above the flat valley of the River Isère. 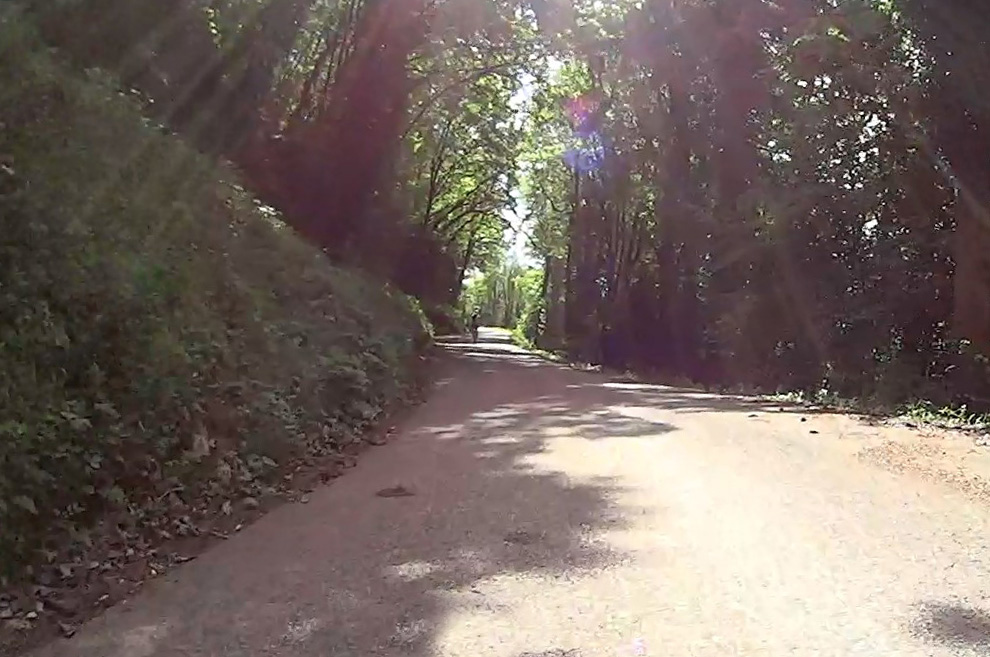 Eventually we reached the bit I had been waiting for. It looks like the road just suddenly comes to a dead end… 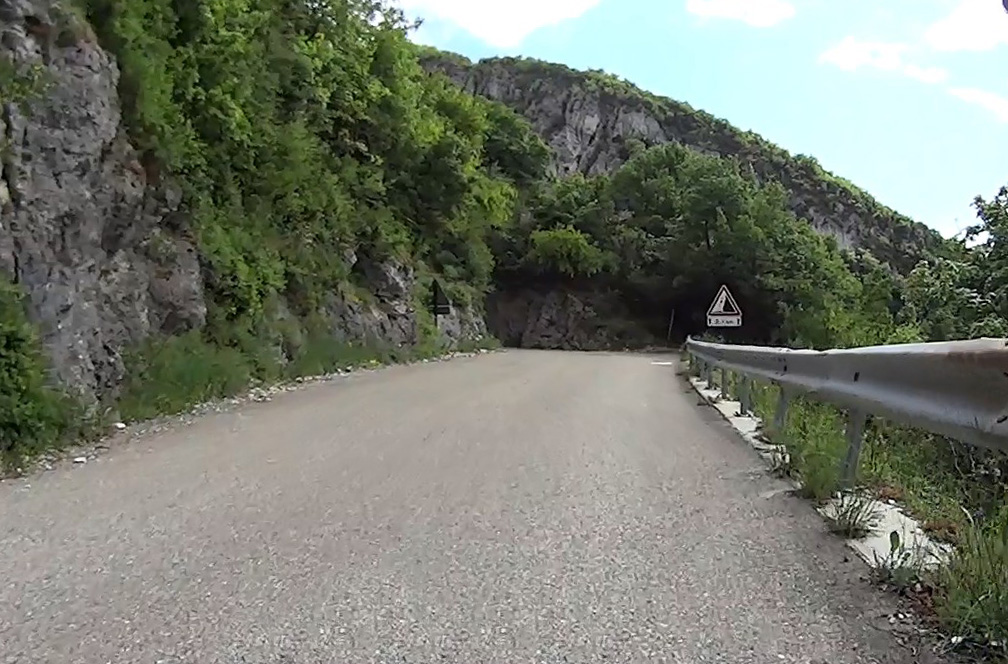 …at the end of which is a spectacular view along the lush Gorges du Nan. While this may not be the most death-defying of balcony roads, lacking the sheer drops and far-reaching views of the Combe Laval for example, it is surely one of the most beautiful. And the interesting thing is that you don’t see it coming. One minute you’re cycling along a normal road up the wooded hillside and the next you emerge into this veritable wonderland. And the ‘secret’ tunnel only adds to the sense that you’ve entered a whole new world. 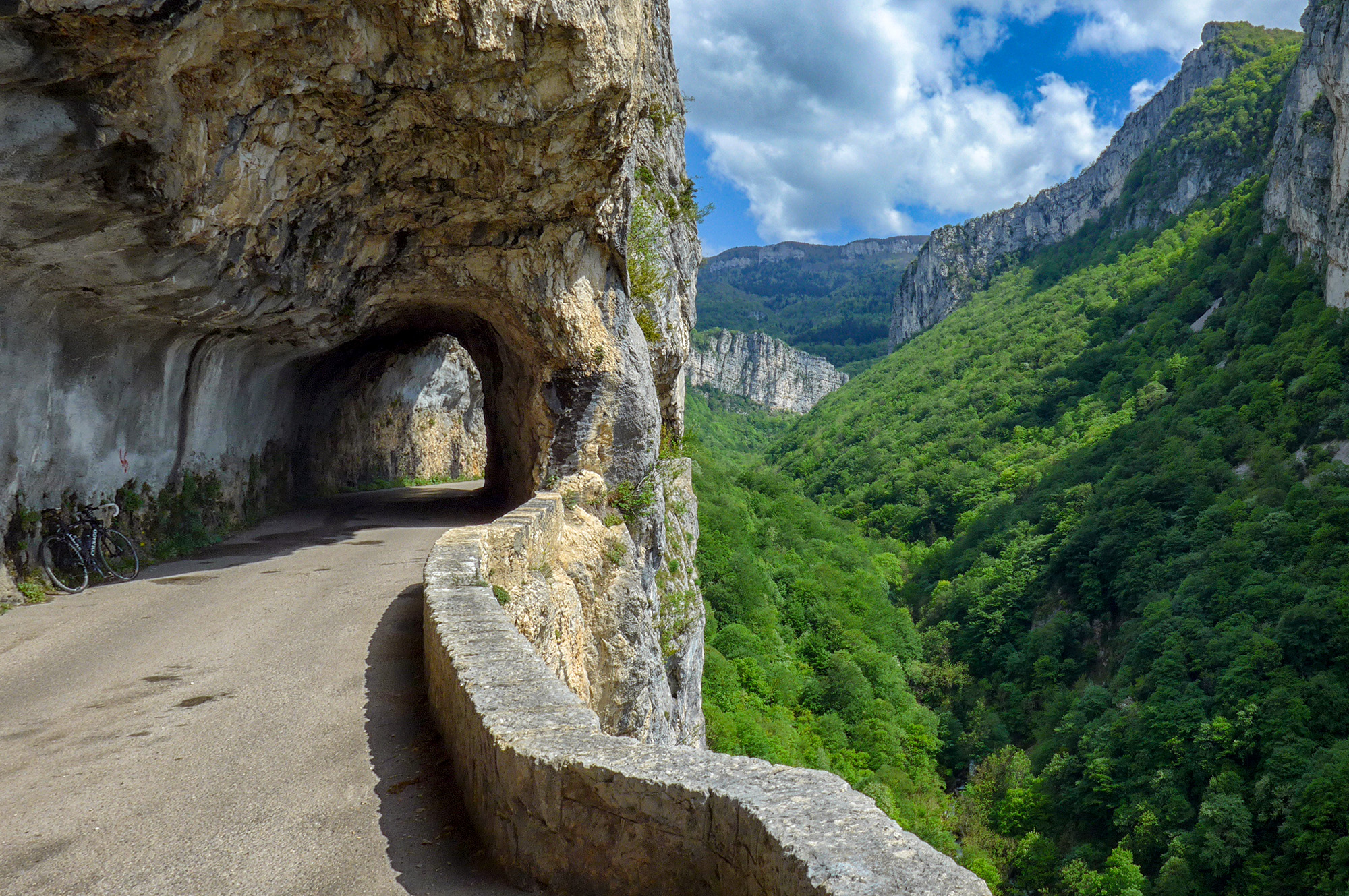 For the next mile and a half the road sticks to the side of the gorge, balcony-style. Although it doesn’t look like it from the photos, or even in reality, the road is still going uphill quite steeply at between 8-10%, enough to make it tricky getting started again from our numerous photo stops. In fact it adds up to another 500 ft of ascent. 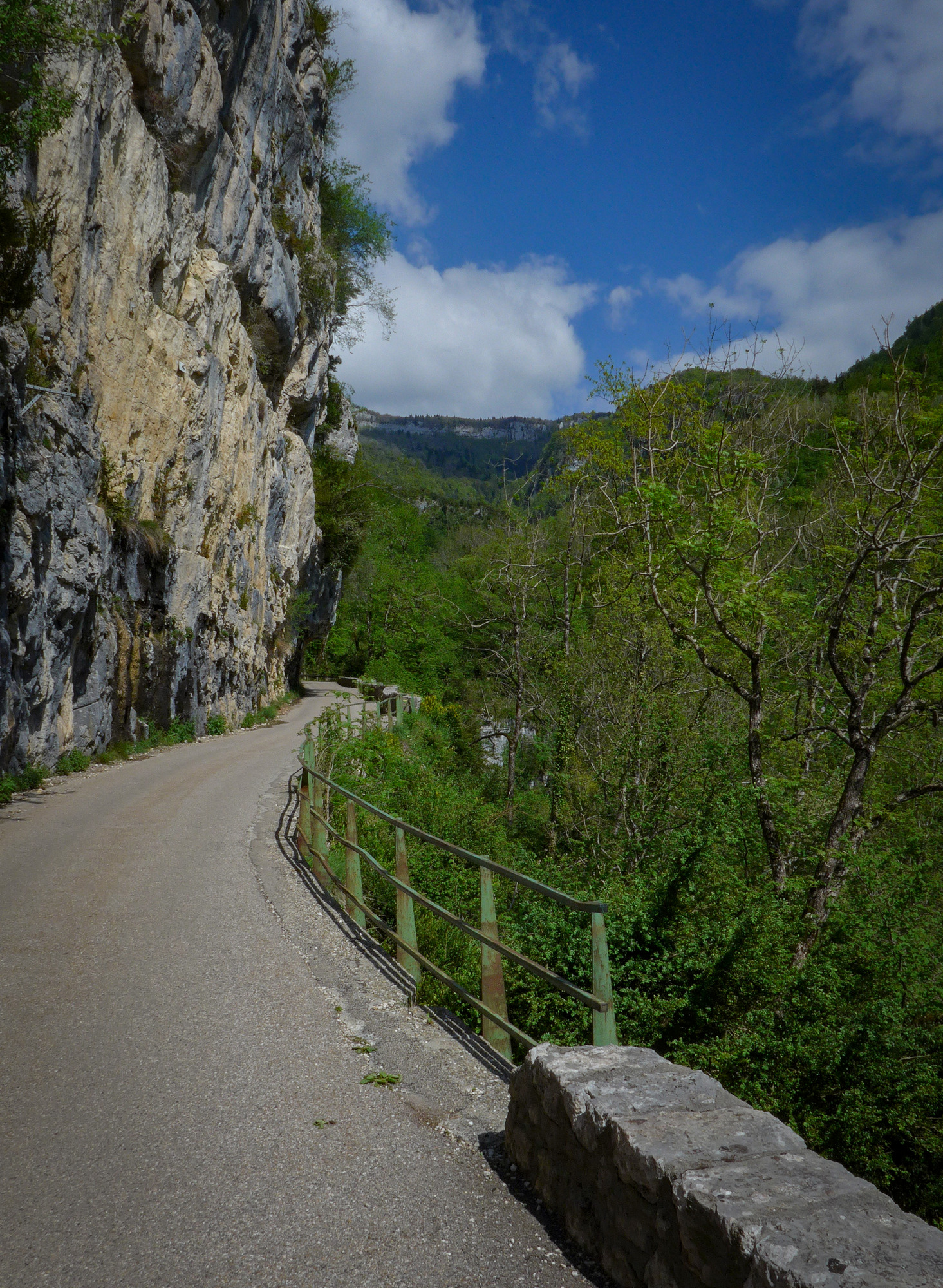 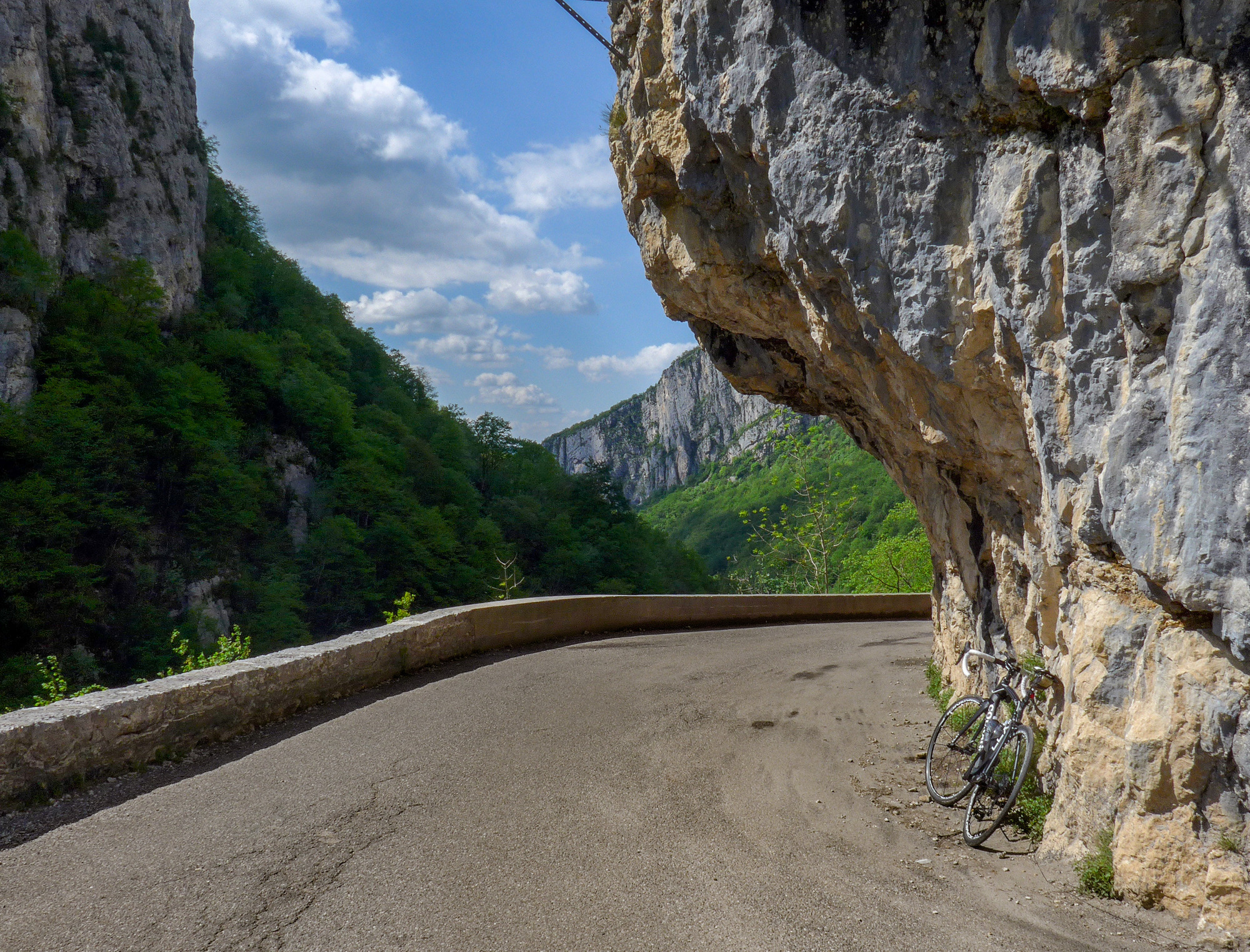 Eventually the gorge proper petered out and the terrain spread out into a huge bowl with green slopes leading up to very high and distant rock-faces all around us. It was difficult to judge the scale. In fact those peaks were almost 2 miles away as the crow flies, and more than double that by road. Amazed by their height I remember saying “it’s a good job we’re not going all the way up there”. Little did I know, until later, that we actually were going that high!

So the next four and a half miles were spent climbing out of the ‘bowl’. The zig-zag road did its best to alleviate the 8% gradient… 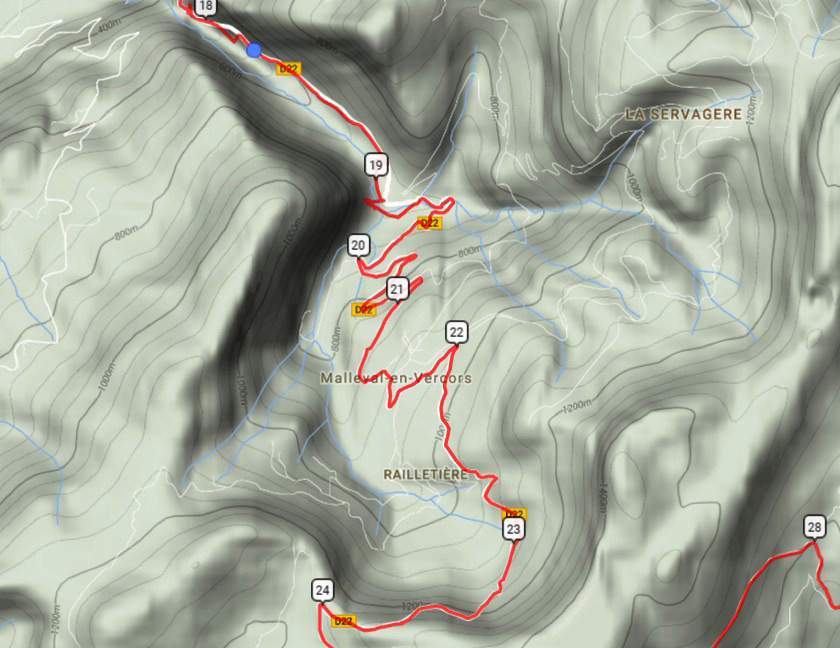 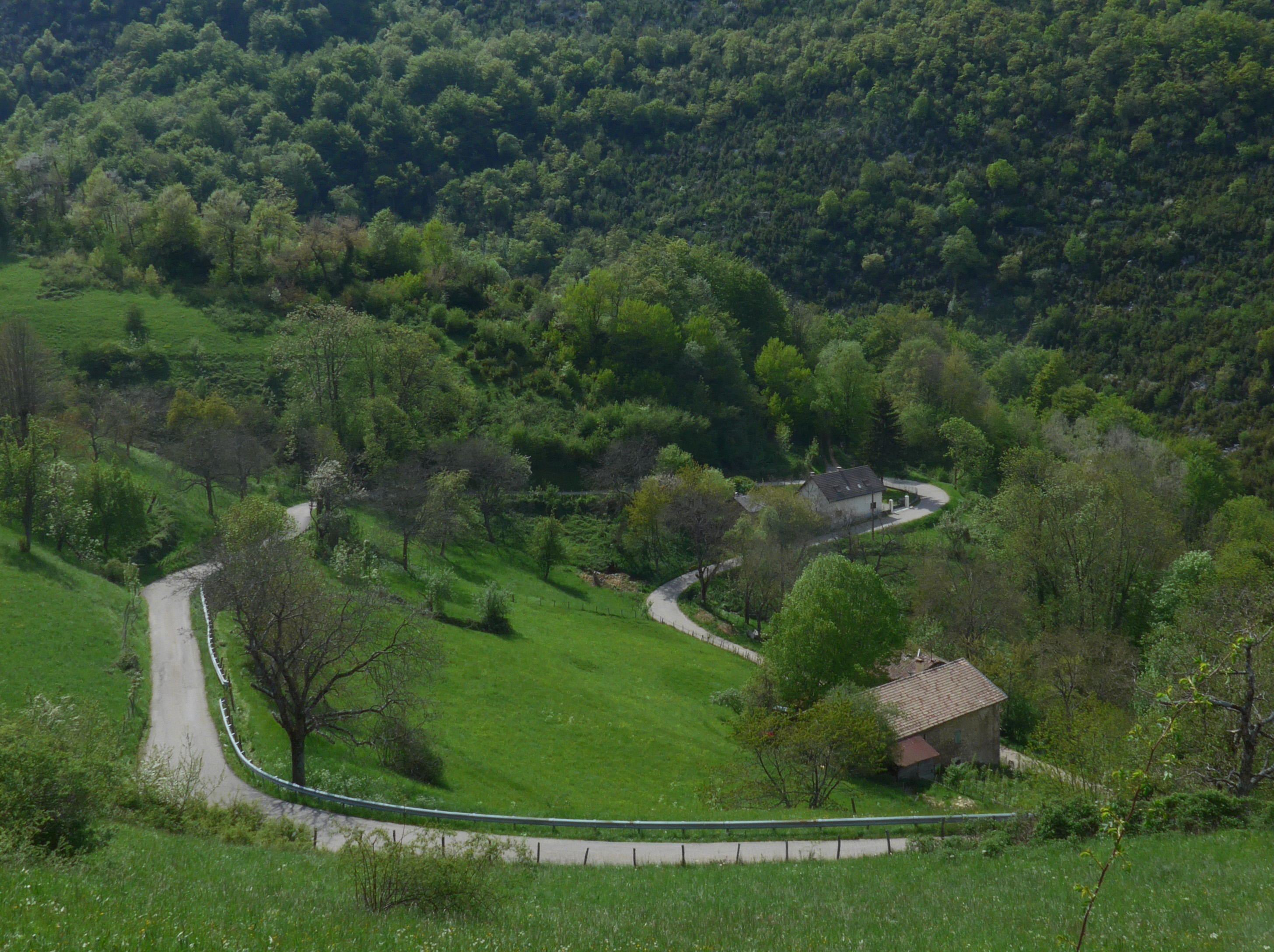 We took it steady on that section, stopping periodically for photos. The road took us through Malleval-en-Vercors. This small village was the site of one of the first German attacks against the Vercors in 1944. More info here 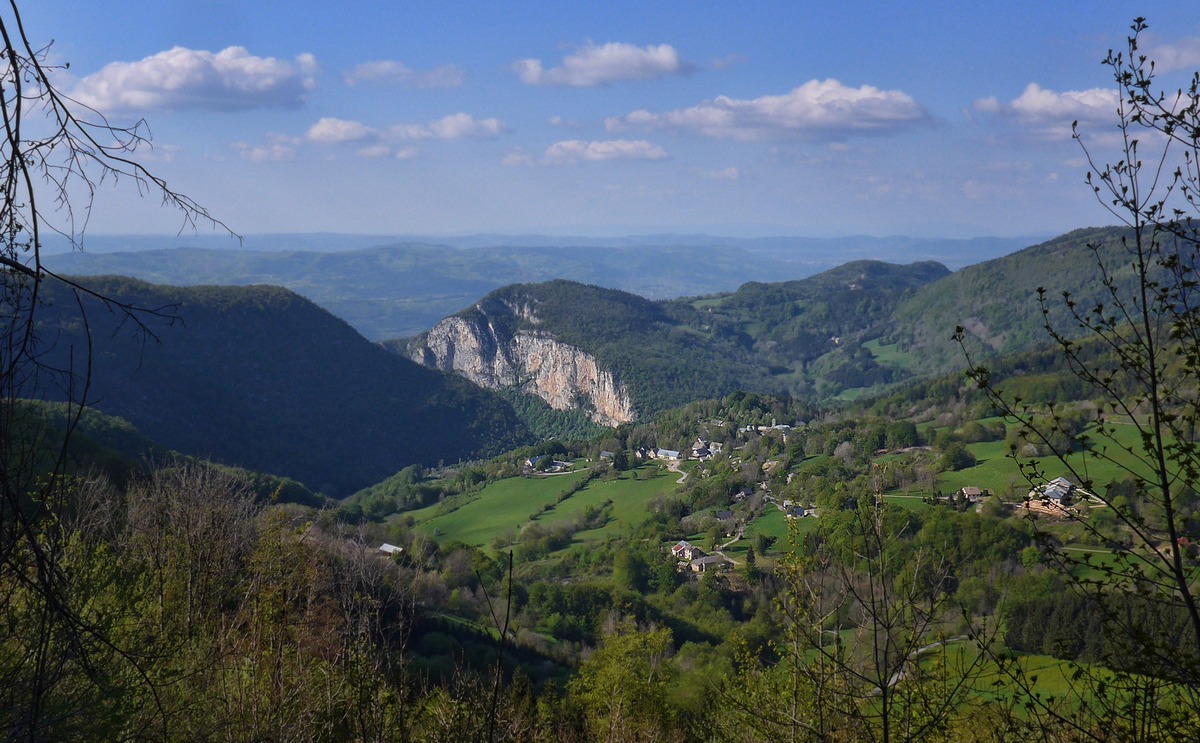 From the ‘lip’ of the ‘bowl’ there was a great view looking back over our route. The bare rock-face of the Gorges du Nan dominated the scenery from almost two miles away. Now at a height of 4100 ft, we still had not reached the highest point of our ride. The road entered the forest and we still had another 600ft to go in two miles, the gradient easing slightly. Eventually the road levelled out and when we saw the marker for La Patte d’Oie (alt. 1394 m), we assumed we had reached the top.

We stopped for the obligatory photo and put our warmer gear on, ready for the long descent. Once back on our bikes, we soon realised that this wasn’t the top. We found ourselves climbing again for the next half a mile to the Col du Mont Noir,  the highest road in the Vercors at 4694 ft. This time we didn’t stop. We were now higher than any point in the UK. I read somewhere that Mont Noir was named thus after a fire designed to cull a local wolf population got out of hand.

As can be seen, the highest point of the ride was also the midpoint in terms of distance. We now had 16 miles of descent ahead of us, starting at 8% down to the valley floor. From the start of the descent there was a spectacular view over the basin of La Doulouche river,

including the village of Rencurel, 2000ft below us, through which we would shortly be riding: 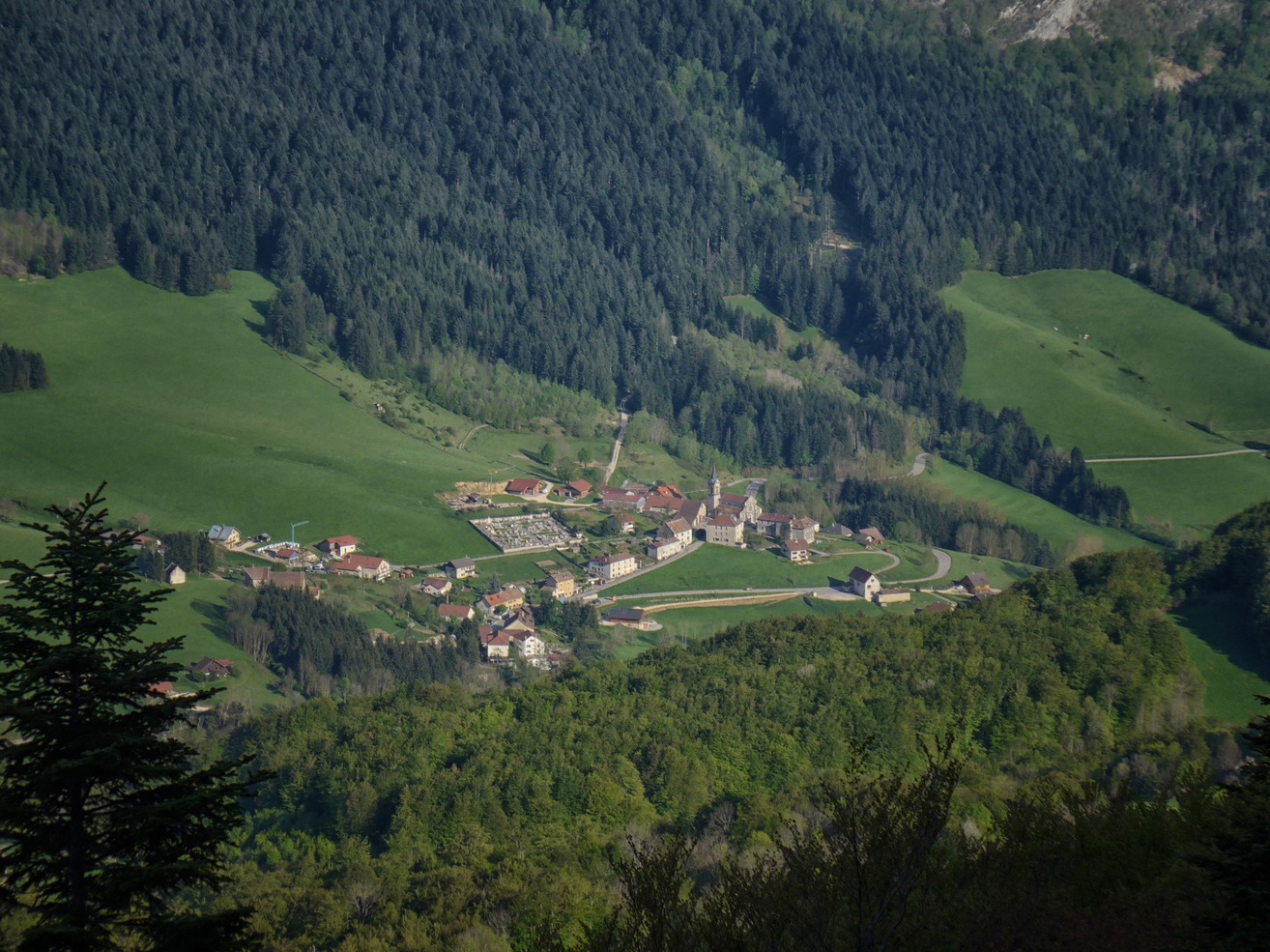 Unlike yesterday’s smooth descent, this one started out OK but rapidly turned tricky due to poor road surface. At 30mph I was having to carefully choose a line between all the rough road repairs.

That three-mile drop of 1100+ feet took 9 minutes. It left us in a beautiful wide green valley heading south on a much flatter road. I’ll let the video tell the story. I have sped-up the video by a factor of four to make it less tedious to watch while still showing the amazing scenery that we rode through over the next 20 miles.

For some reason I didn’t have the video camera recording as we rode into Pont-en-Royans. It’s a very attractive village with its hanging houses suspended over the River Bourne. Some of the balconies looked most precarious. We would liked to have spent time exploring this place but it was now eight o’clock in the evening and we were chasing a setting sun. 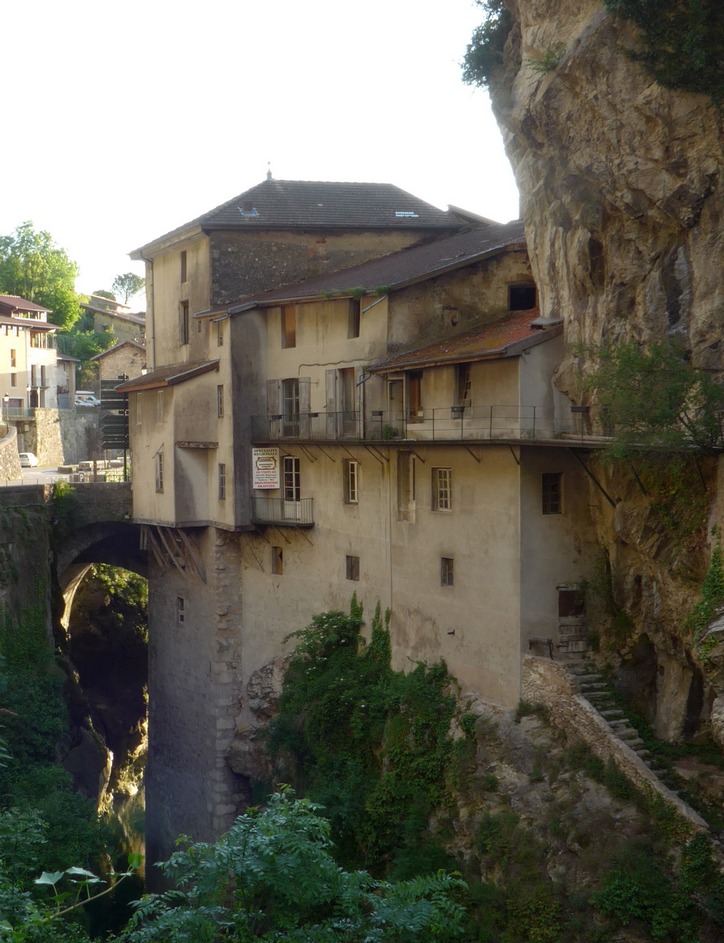 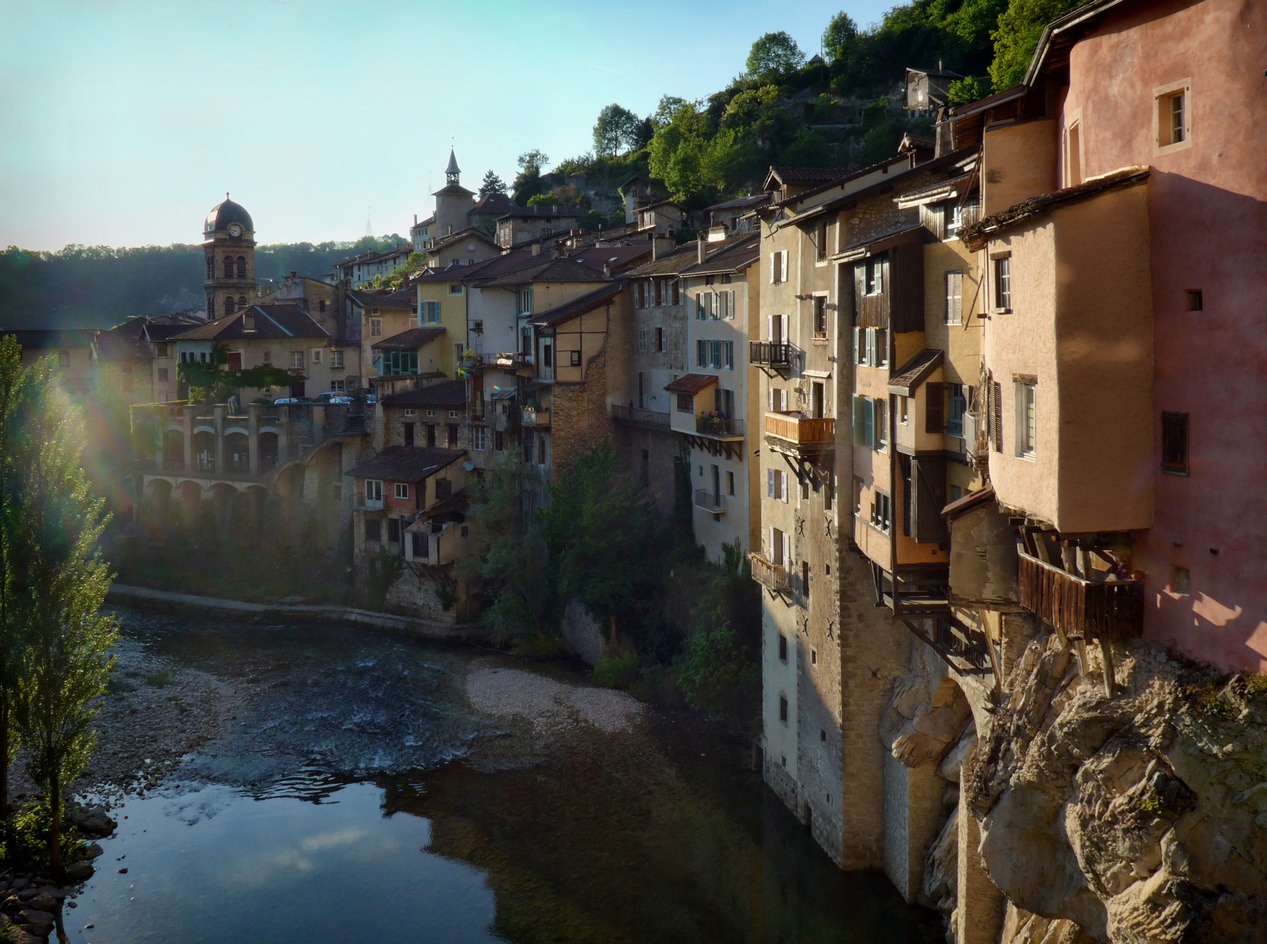 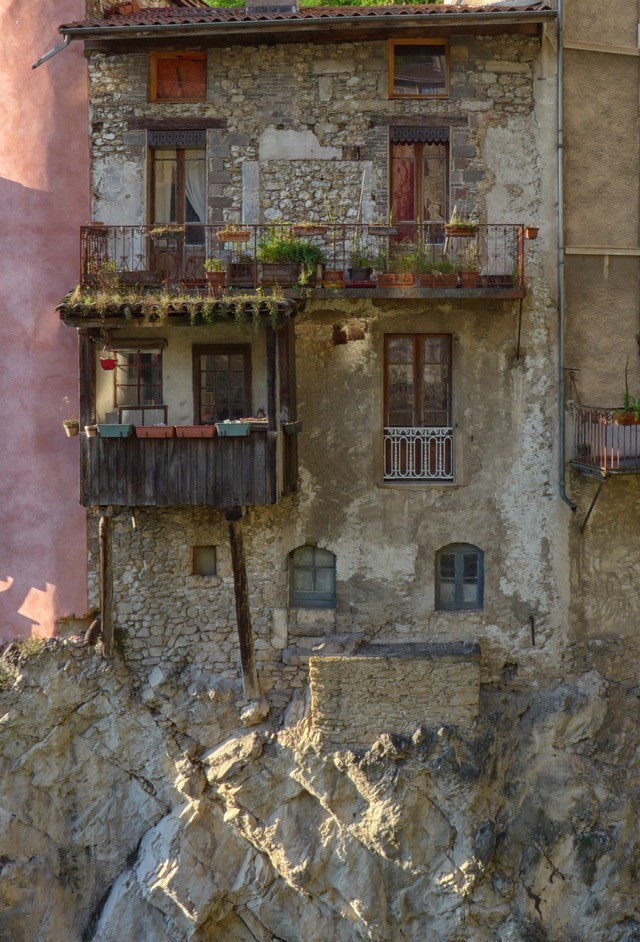 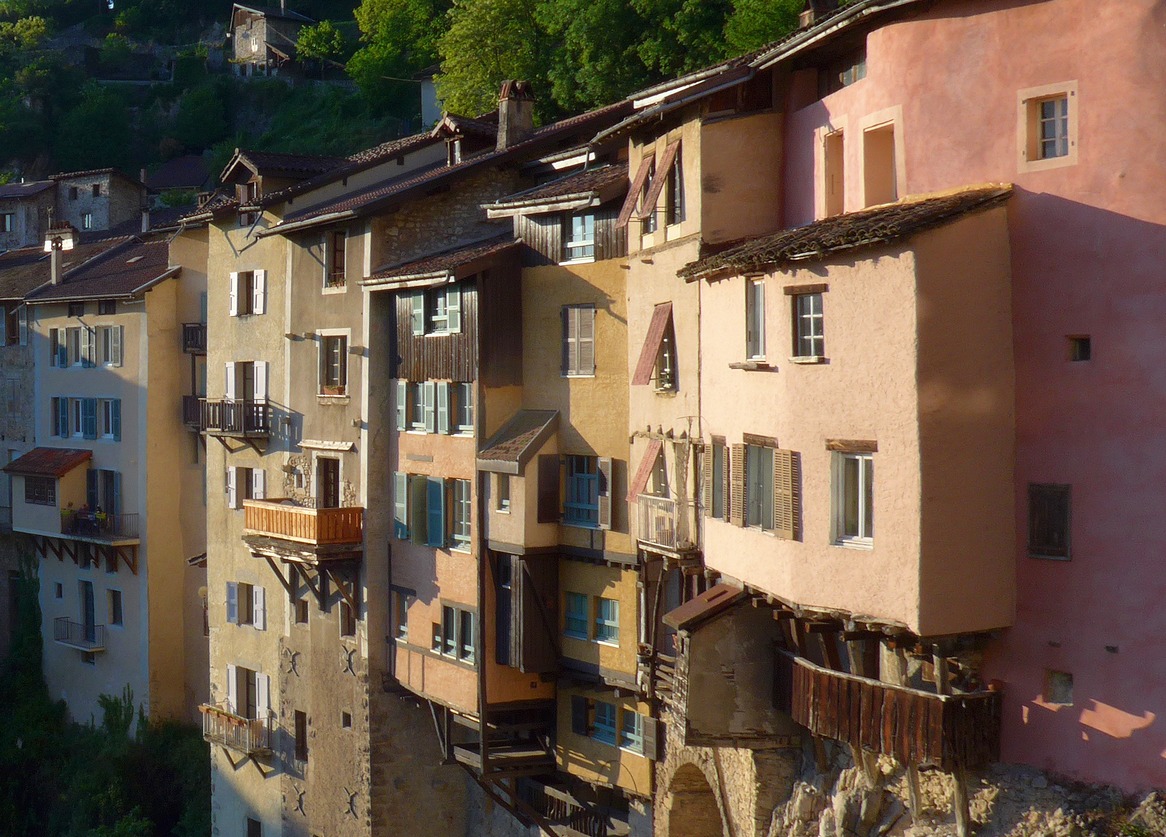 As can be seen at the end of the video, we stopped just two miles from the campsite in a peaceful country lane between open fields. The time was 9 pm. It was silent save for the evening birdsong and crickets. The sun was barely above the horizon now and, with the sky turning a deeper blue, it cast a warm yellow glow across the fields to light up the rocky faces of the Vercors massif, way off in the distance. The video has been edited but in fact we stood gazing at that view for five full minutes without moving, without speaking, just soaking it in. 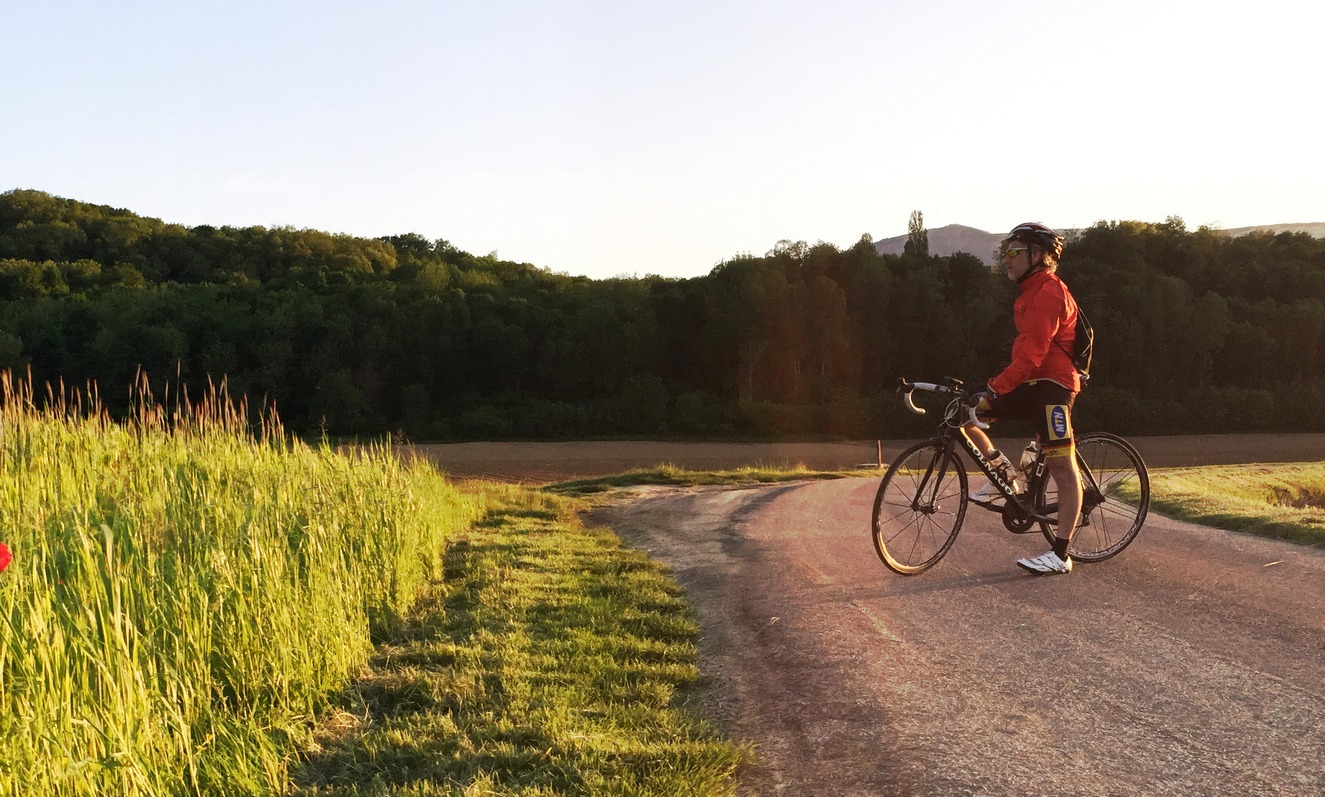 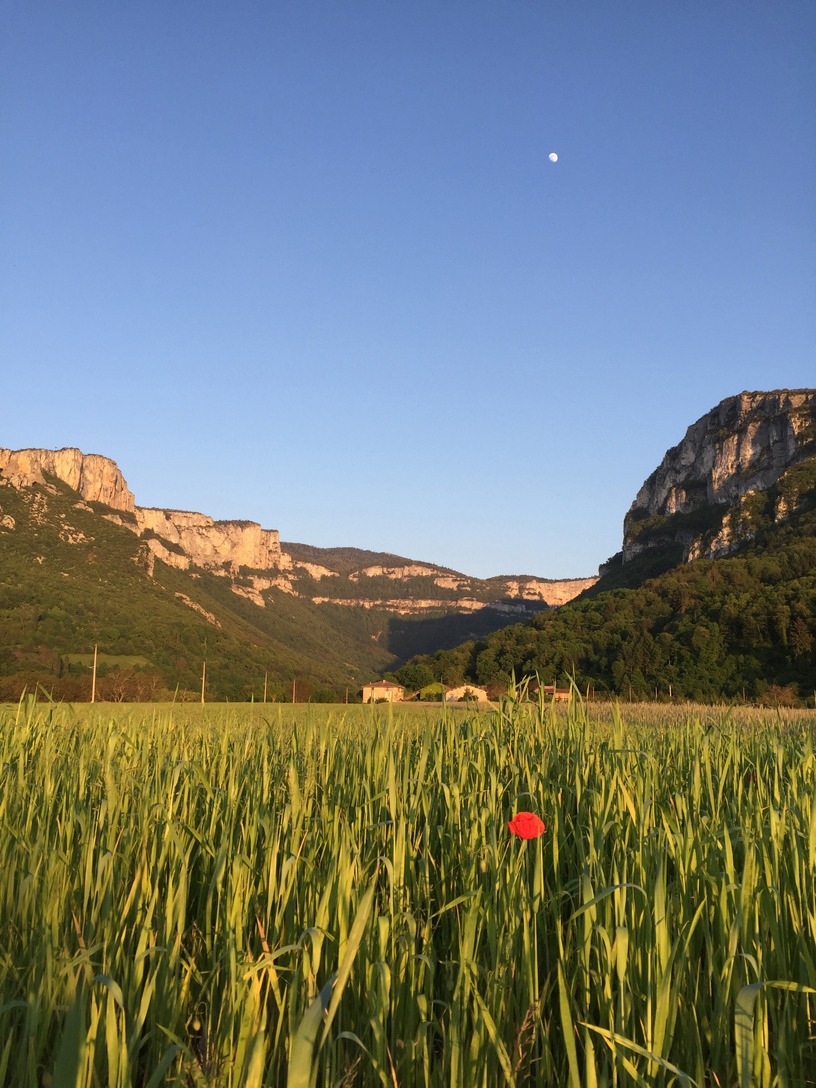 A perfect end to an amazing day of cycling.

Click any image below and use arrow keys to scroll through