I bought these tyres back in December 2012 and have only just fitted them. I hope they turn out to be as reliable as the Mavic Yksion Pro Griplink (front) & Powerlink (rear) tyres that they have replaced. I covered over 2000 miles on the Mavics without a single puncture (actually I did have one puncture but it was on the inside of the tube, so had nothing to do with the tyres). 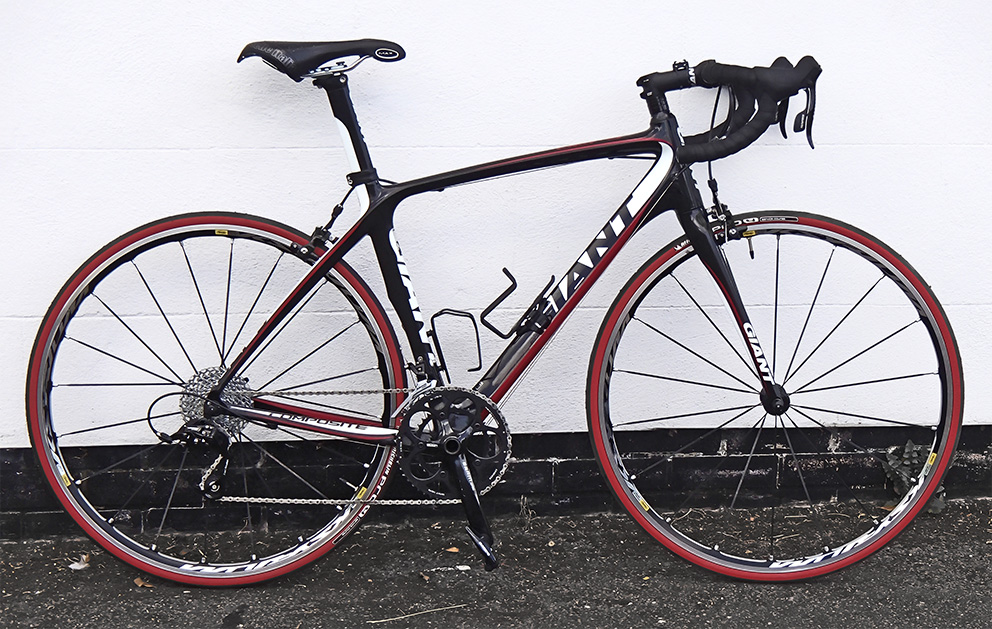 When I first fitted these red Michelins to my Giant Defy, I was concerned that they looked a bit too garish.

But I’m getting used to them now and I think the on the frame.

They definitely do not look good, however, on my

Notice that I obeyed  when I fitted them!

Follow-up (28th Oct 2013): After less than 200 miles on these tyres, I suffered a puncture on this ride. During the post-mortem, I saw that there was a split on the side of the inner-tube. So I looked for a corresponding hole in the tyre and saw this: 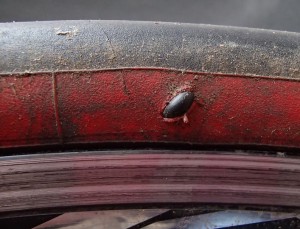 At first I thought there was a piece of grit lodged in the tyre and I tried to eek it out with my finger nail, but then I realised that it was the inner-tube bursting through a split in the sidewall of the tyre! Damn! I don’t think there’s any reliable way of repairing this, so it looks like a new tyre will be required. It was only when I saw the photo that I noticed that there is another thin cut to the tyre just to the left of the hole. Maybe that happened at the same time. These tyres are known for having ‘flexible’ (i.e. thin) sidewalls, and that’s part of their attraction, performance-wise. I won’t criticise the tyres just yet. It was probably just bad luck – the roads were really covered in lots of autumnal debris that day. I’ll see how they go.

Follow-up (21st April 2014): After about 400 miles on the replacement tyre, I suffered another sidewall puncture on this ride. Exactly the same thing had happened again. But this time I had a in my bag. I stuck the boot to the inside of the tyre to bridge the hole. The boot prevented the inner-tube bulging out of the tyre and I assume it would help prevent the hole getting bigger. Tyre-boots are only intended as a temporary repair, but this time I left it on as I didn’t want to have to go out and buy yet another tyre after only 9 rides!

Follow-up (18th October 2014): The tyre boot has now been in the tyre for 1100 miles and still looks OK. I check it every ride. That certainly allowed me to get more value from this tyre. I’m sure there are loads of cautious types out there who’d say “why risk your life for the sake of a new tyre”, “suppose it blew out on a fast downhill”, etc. I would say to them that these tyres have already blown-out twice when nearly new. Cycling has a certain amount of inherent danger. It’s a matter of weighing the odds. If you want to totally ensure your safety then stop riding a bike! 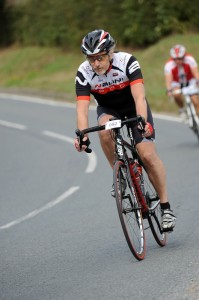 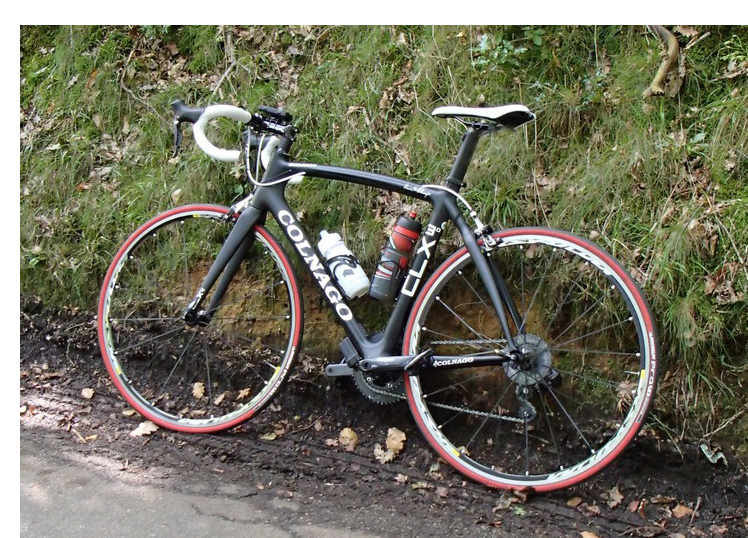 #40: Tyres are to be mounted with the label centred over the valve stem.

Pro mechanics do it because it makes it easier to find the valve. You do this because that’s the way pro mechanics do it. This will save you precious seconds while your fat ass sits on the roadside fumbling with your CO2 after a flat. It also looks better for photo opportunities. Note: This obviously only applies to clinchers as tubulars don’t give you a choice.