This first report coming at about 5 miles into the journey. Getting ready for the ride, I’d got out of my van dressed in the same setup as yesterday, but soon realised it was extremely warm outside. I got chatting to a couple next to me who were just about to climb Alpe d’Huez and they said they had done La Bérarde a couple of months ago. I asked them if it would be sunny on the route because I was trying to work out what to wear. They said it would be sunny so I quickly went back into the van and changed into to my cooler gear that I started off with yesterday – a short sleeve shirt with arm warmers and rain jacket available for the descent. I set off at 12:15.

The first 2 miles along a straight, flat road were in blazing sunshine.

Then the road turned into the mountains and I was in the shade. Consequently it was quite nippy and I pulled my arm warmers up. Suddenly I wondered if I should have left the warm gear on. The road is following the river Vénéon, which I can hear nearly all the time in the distance though I can’t see it. 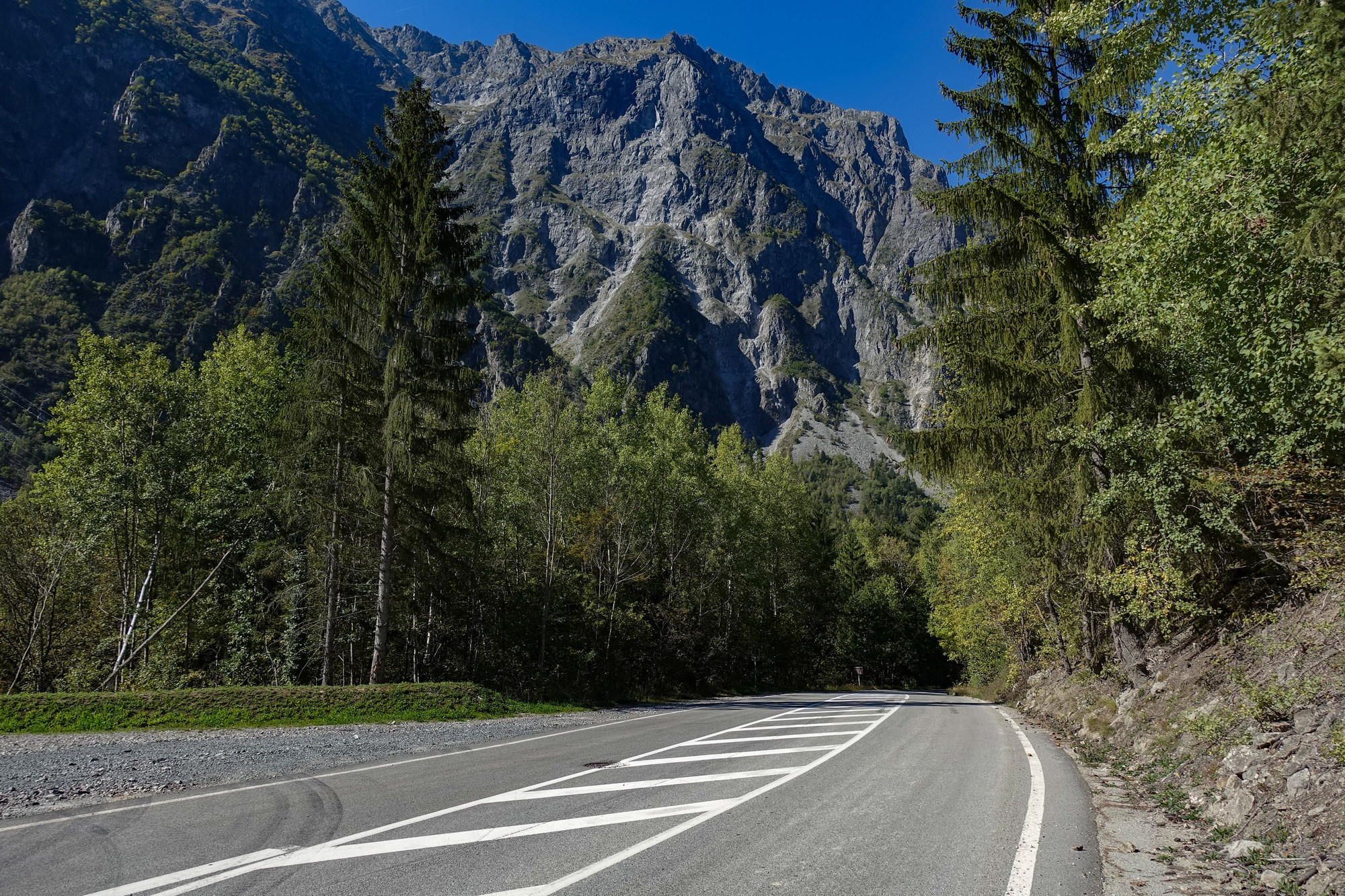 One section was nearly 7%. The road didn’t look that steep, but suddenly I found myself in first gear, mistakenly thinking I had loads of gears left. This climb has signposts every 1 km telling you how steep it’s going to be and how close you are to the end. Those are always very useful. 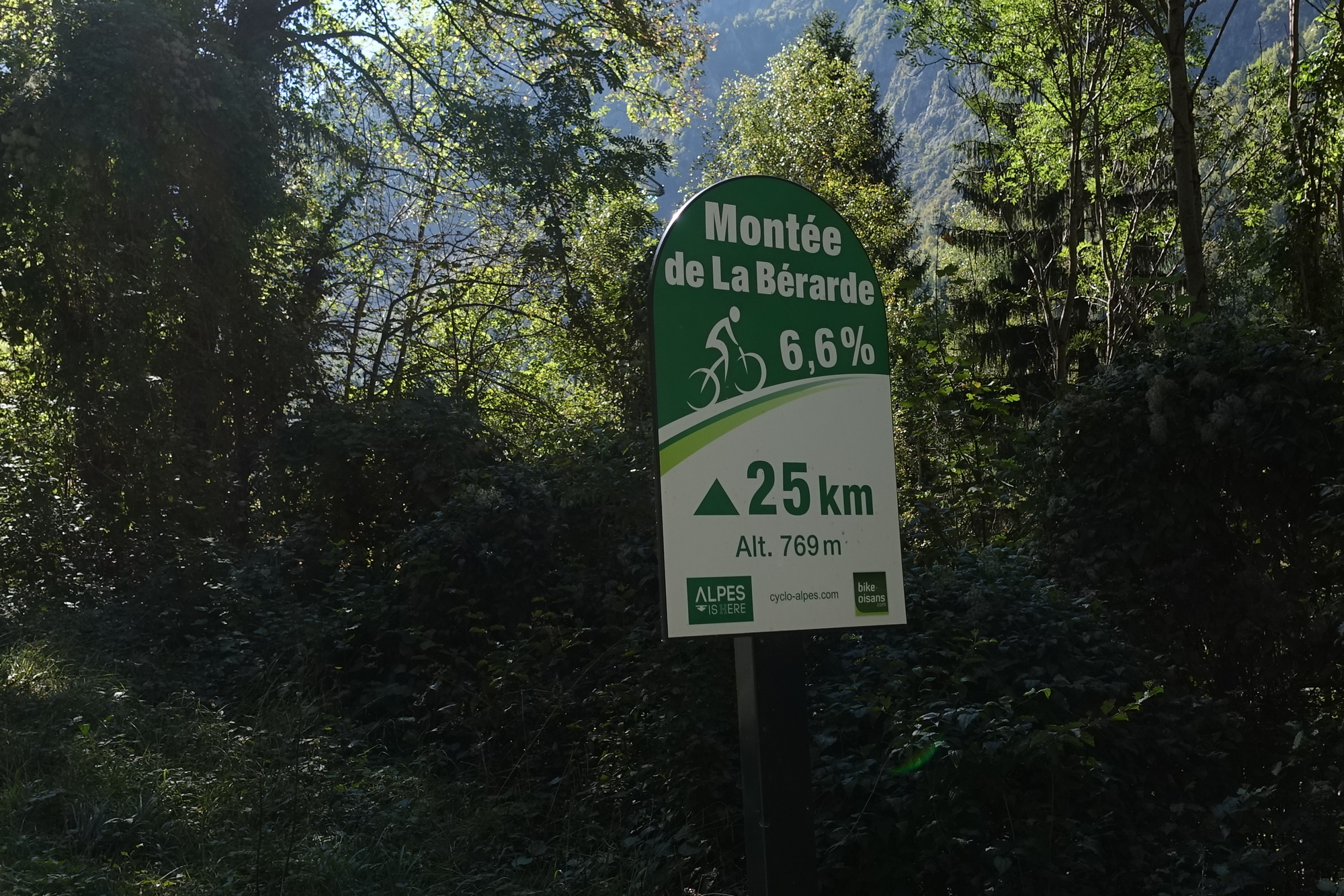 I can’t believe I’ve got a extremely good mobile signal deep down here between mountains all around me. 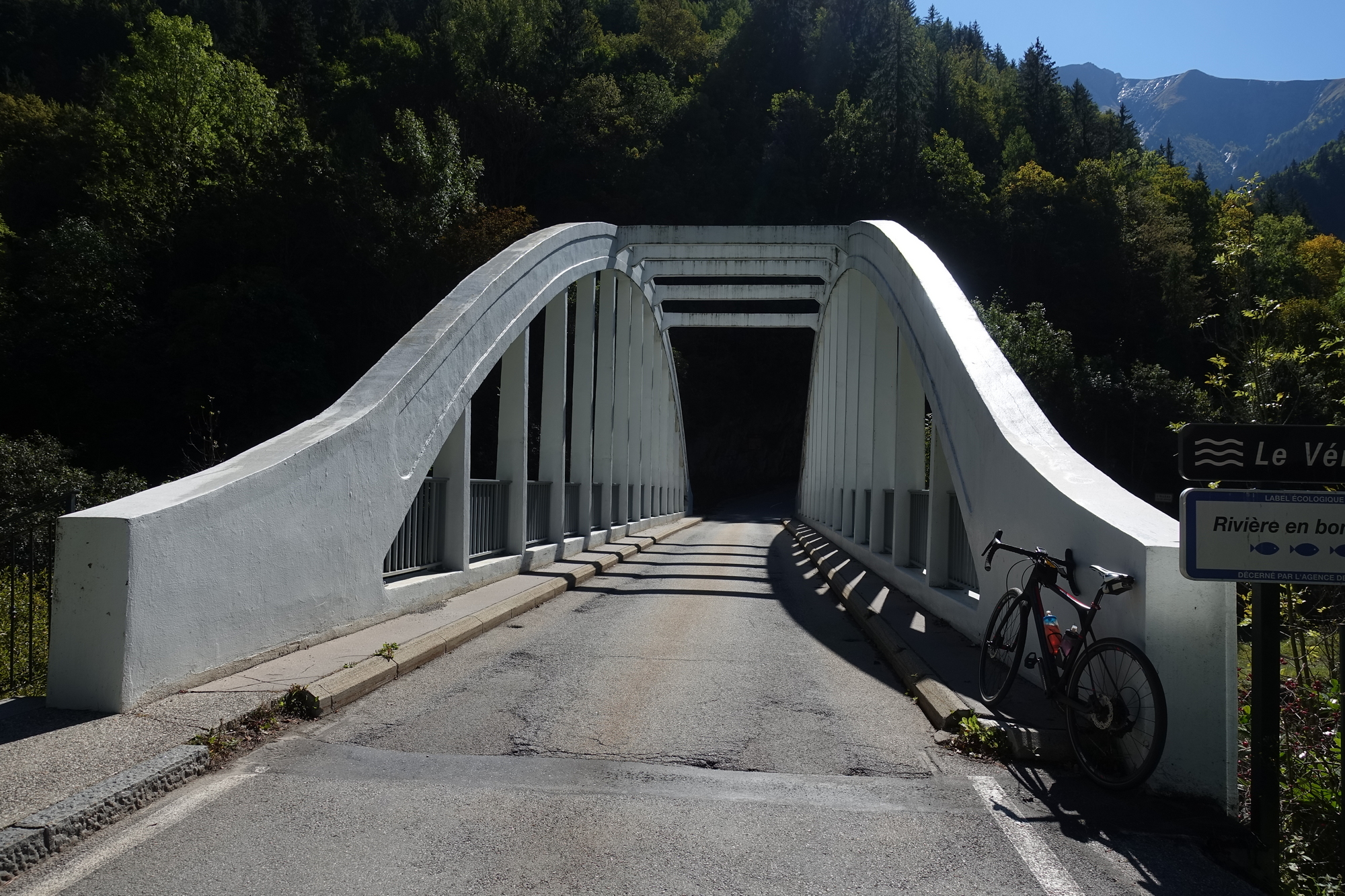 The following couple of kilometres were very steep. One signpost said average 11.2% for the next coming km but there were easier gradients in that section, so elsewhere in that km must have been gradients higher than 11, probably about 12 or 13 I would imagine, to bring up the average. 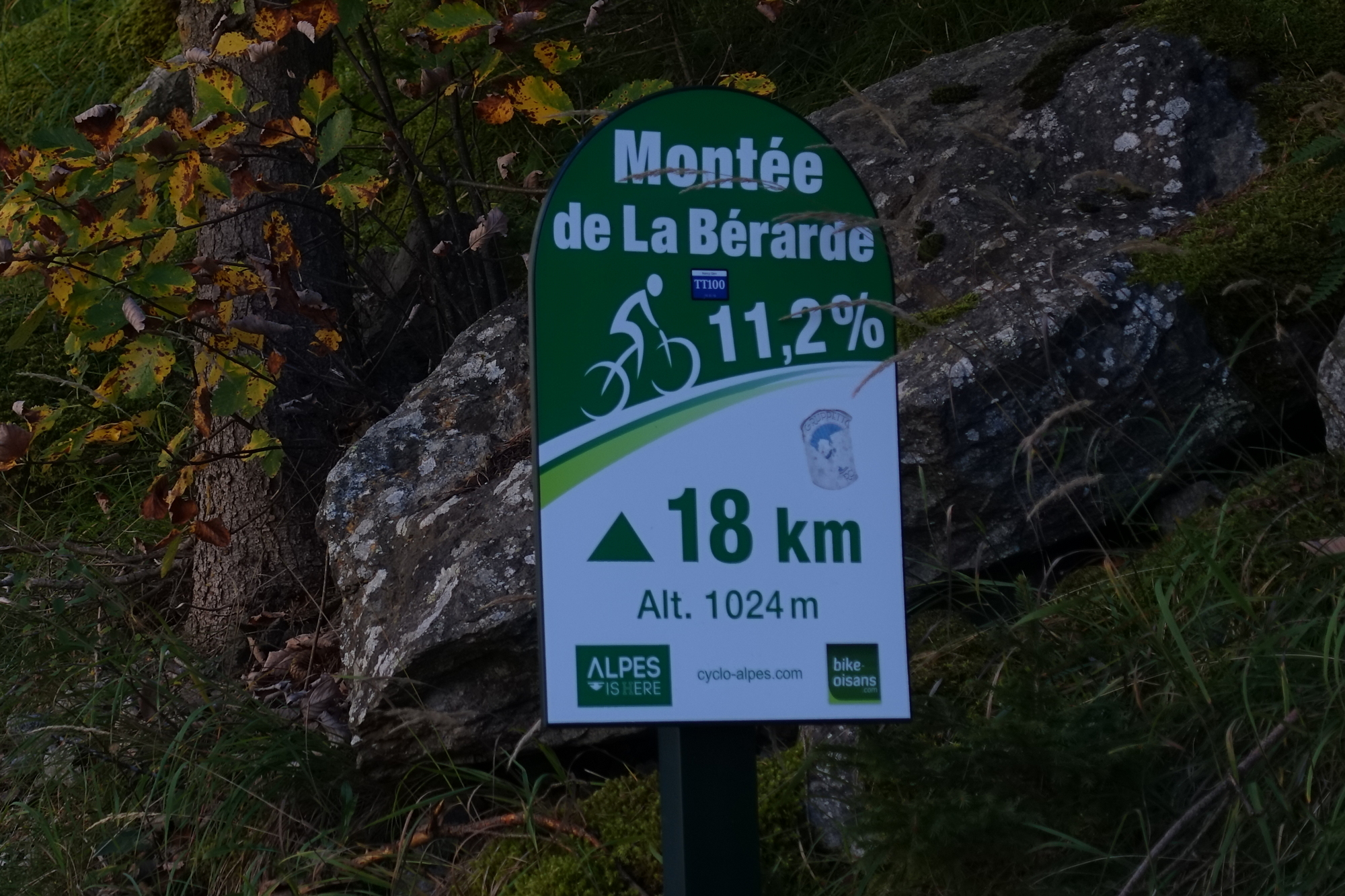 After that section, the road leveled off again and there’s only been a couple of percent mentioned on the markers. 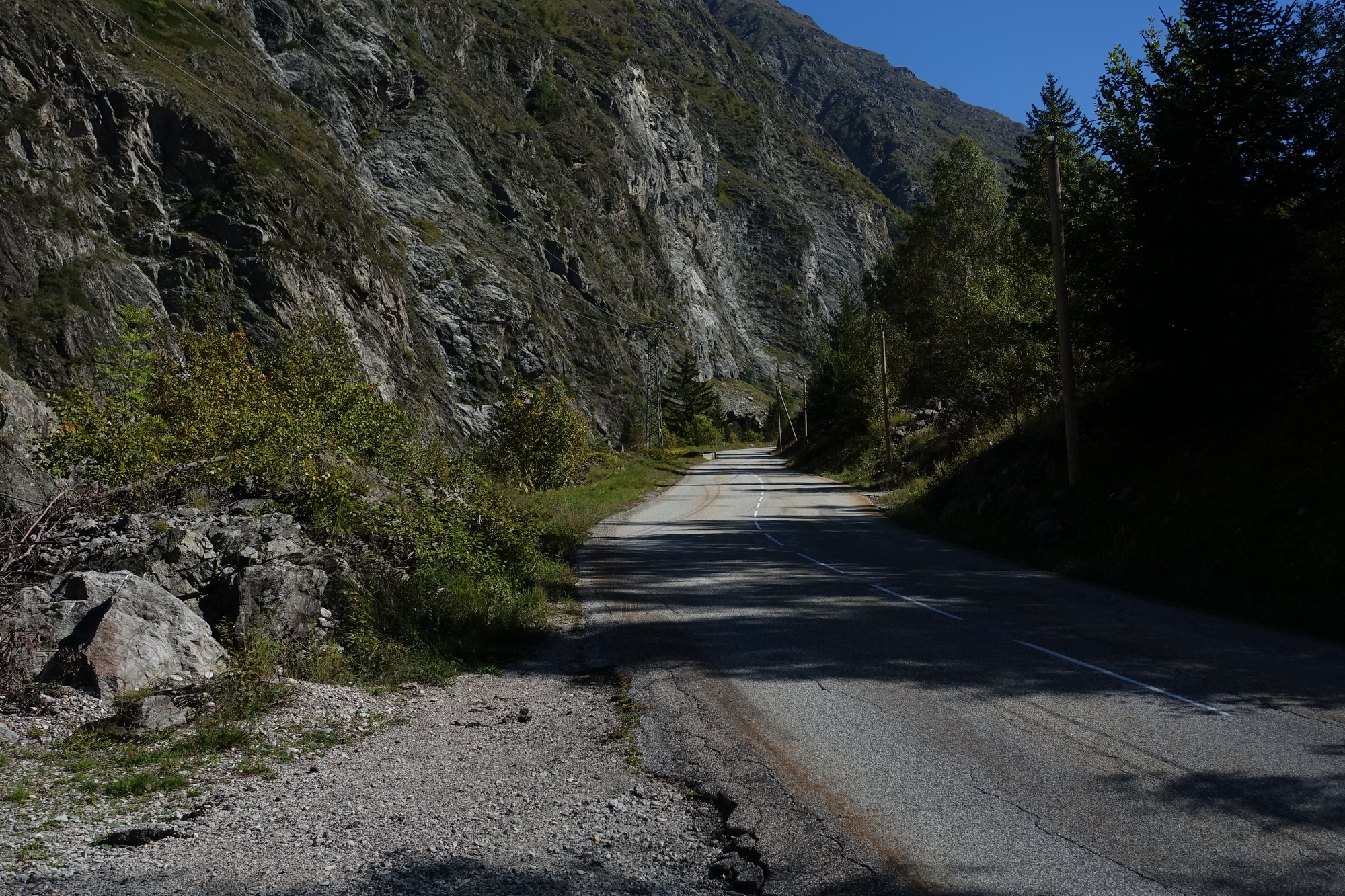 Further on, the road crossed a bridge by a dam and some kind of water works. 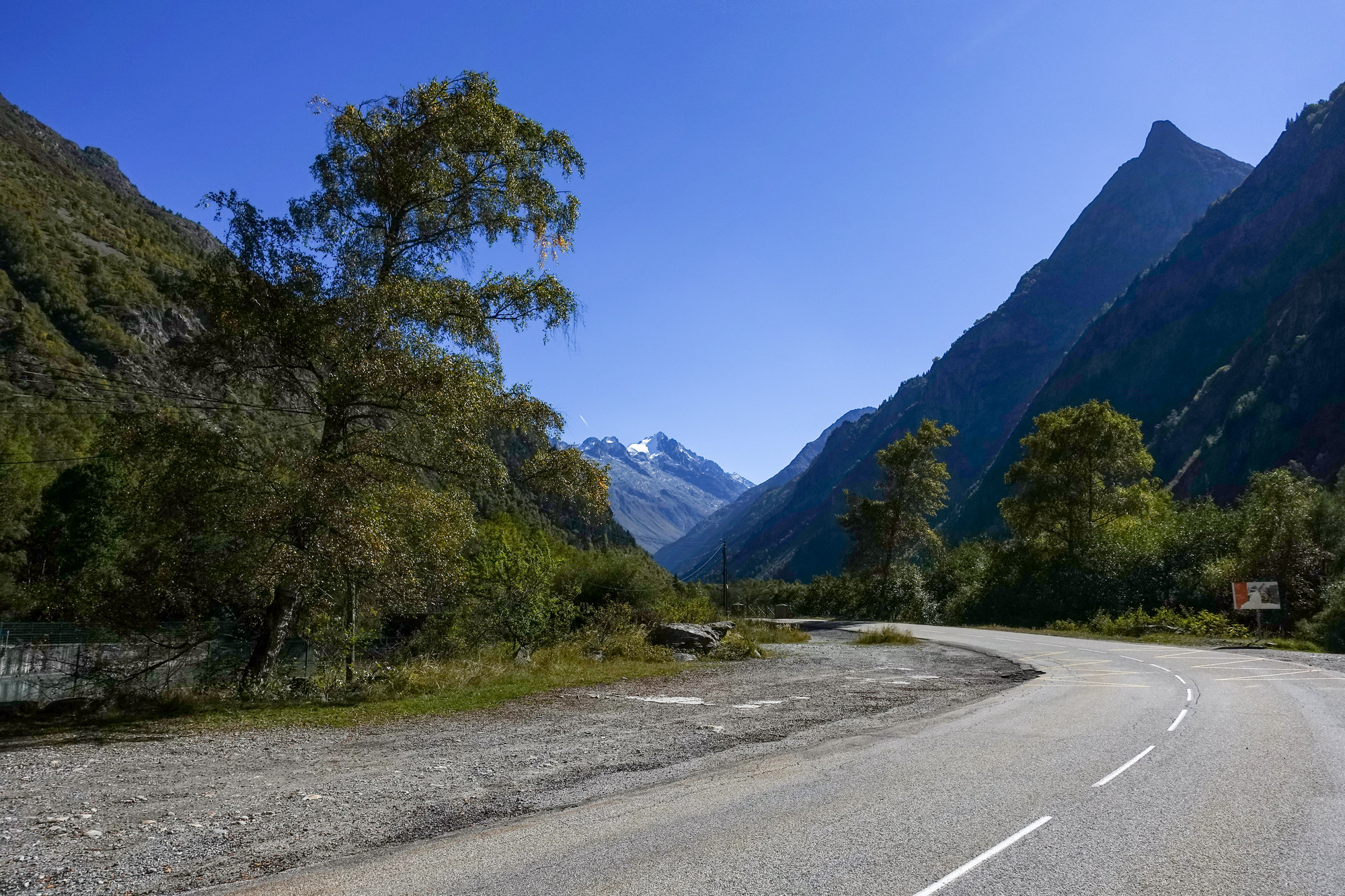 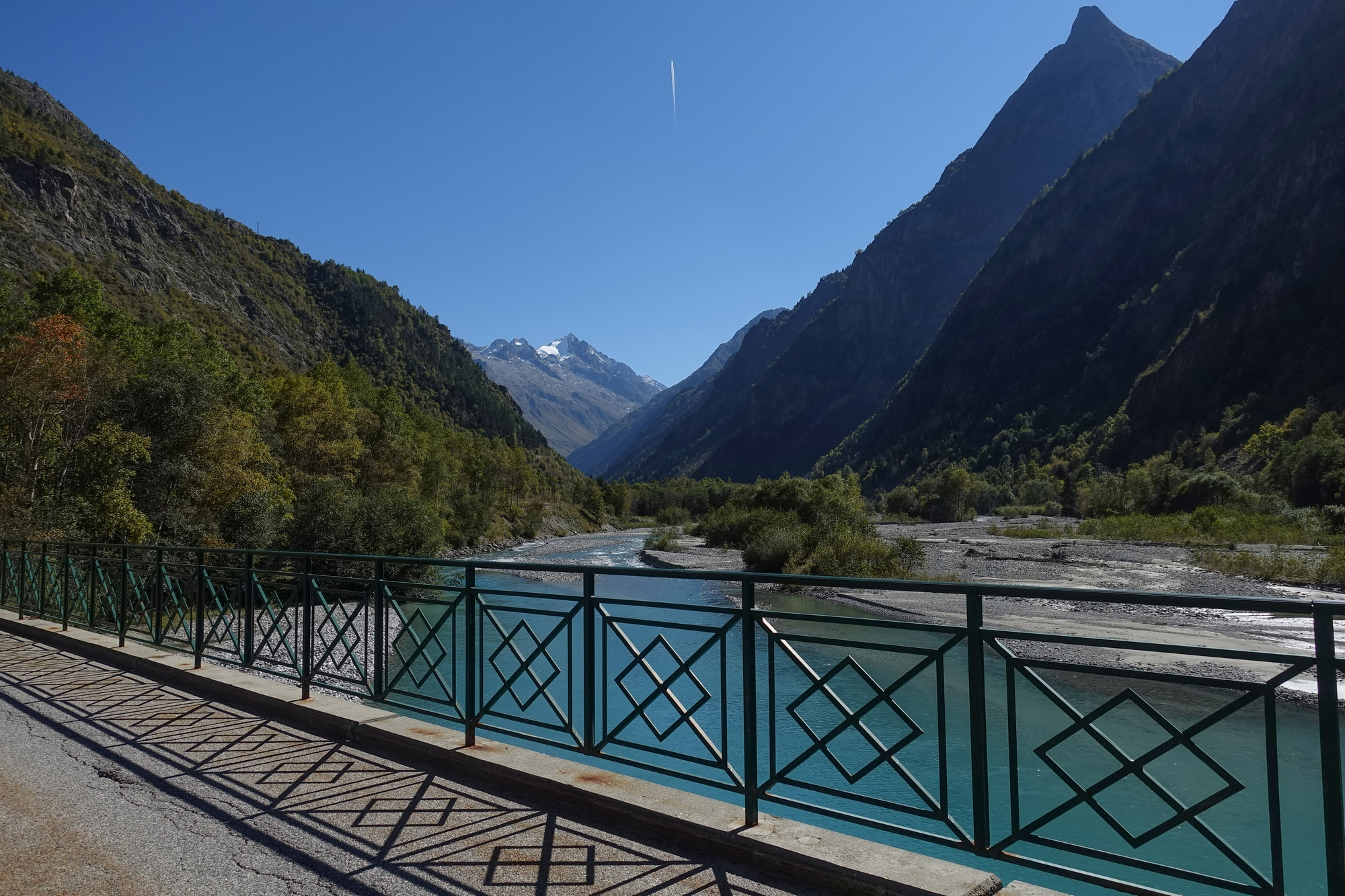 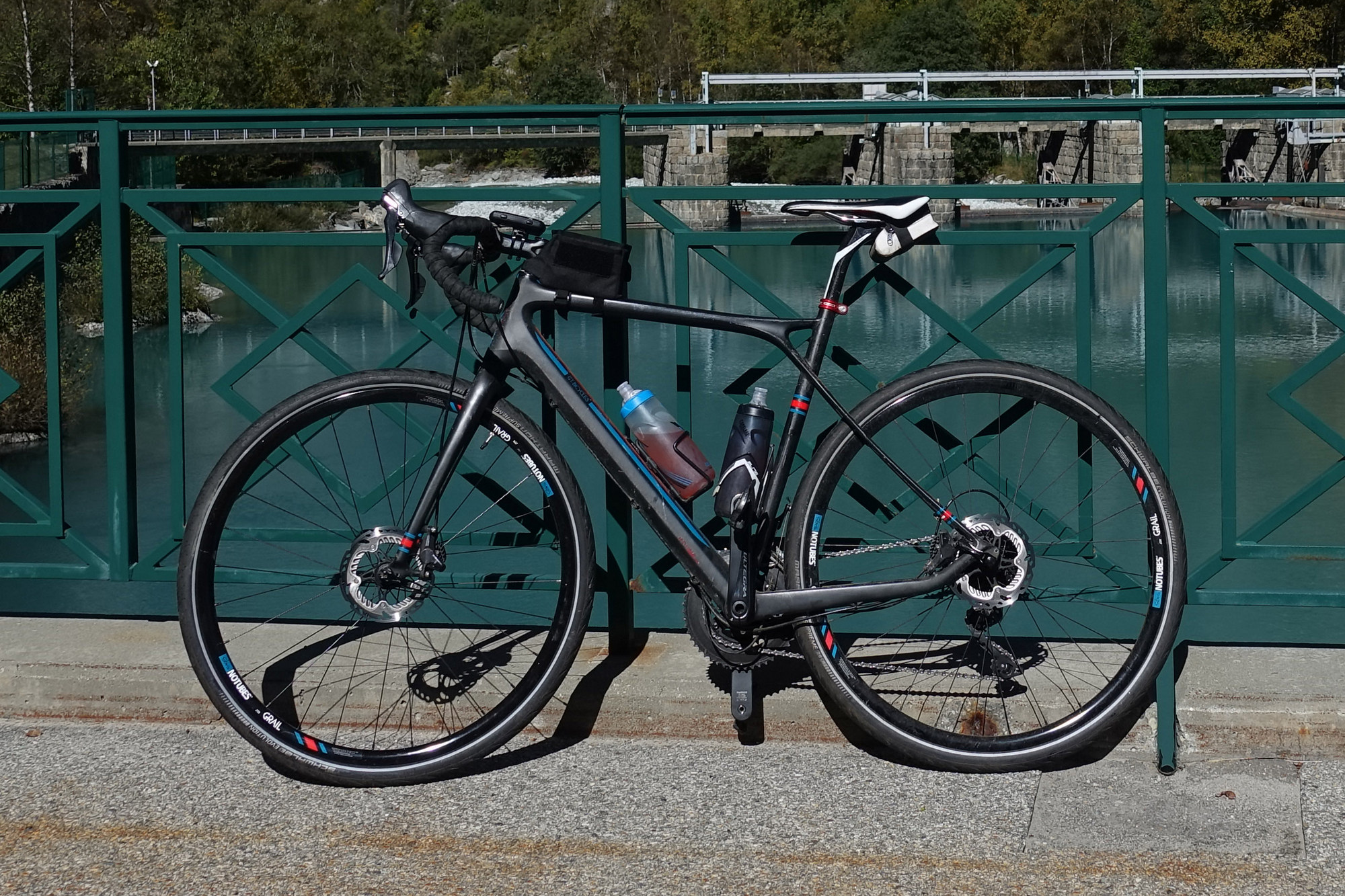 The section of road I’m on at the moment is right next to the river and flat,

but up on the left-hand rock face I can see a road very high up. I’m just hoping that that’s not a part of my route! 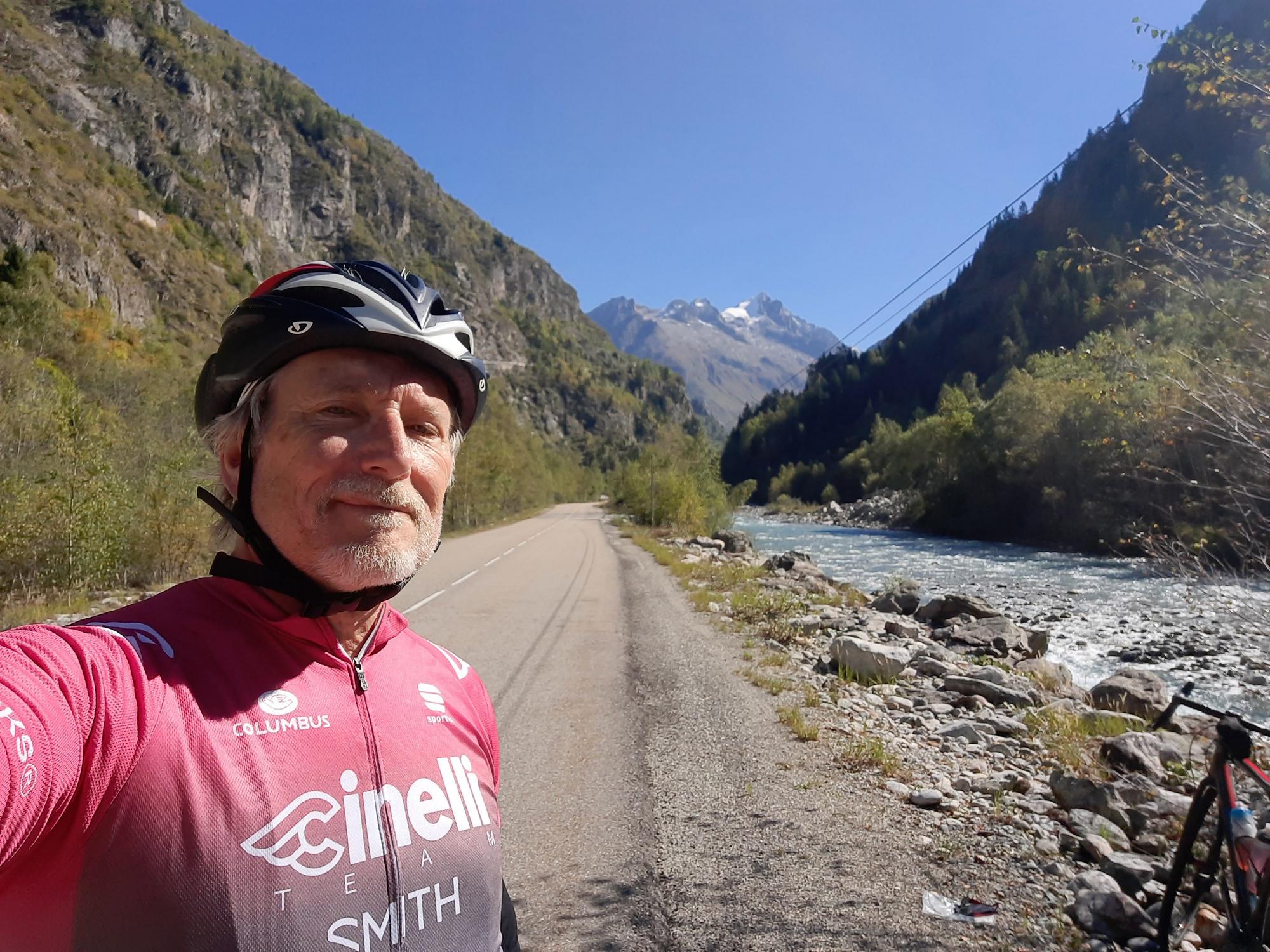 This report coming at 13.7 miles. I don’t know how long it is in time since the last report but I do know it’s ages in terms of pain. Needless to say those switchbacks high up in the air on my left, mentioned in the previous report, were part of my route. I saw them coming up on the Garmin and said “oh no..” 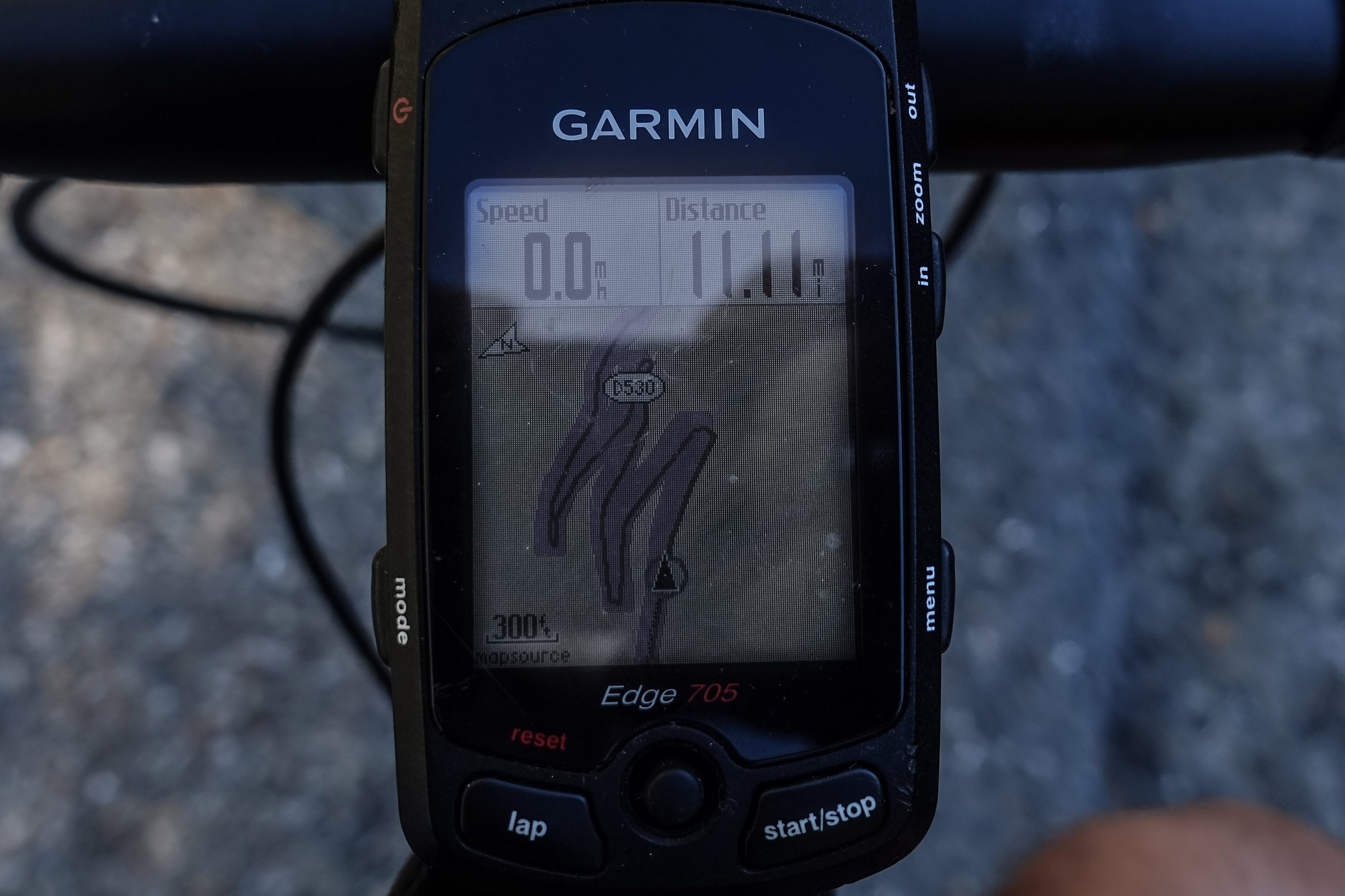 … and they were tough. I felt like I was on Alpe d’Huez again! As I climbed up those hairpin bends, the river got quieter and quieter as it fell below me. Eventually the road came into a village where the road leveled out slightly.

I stopped for a break. I had just taken a photo of the church… 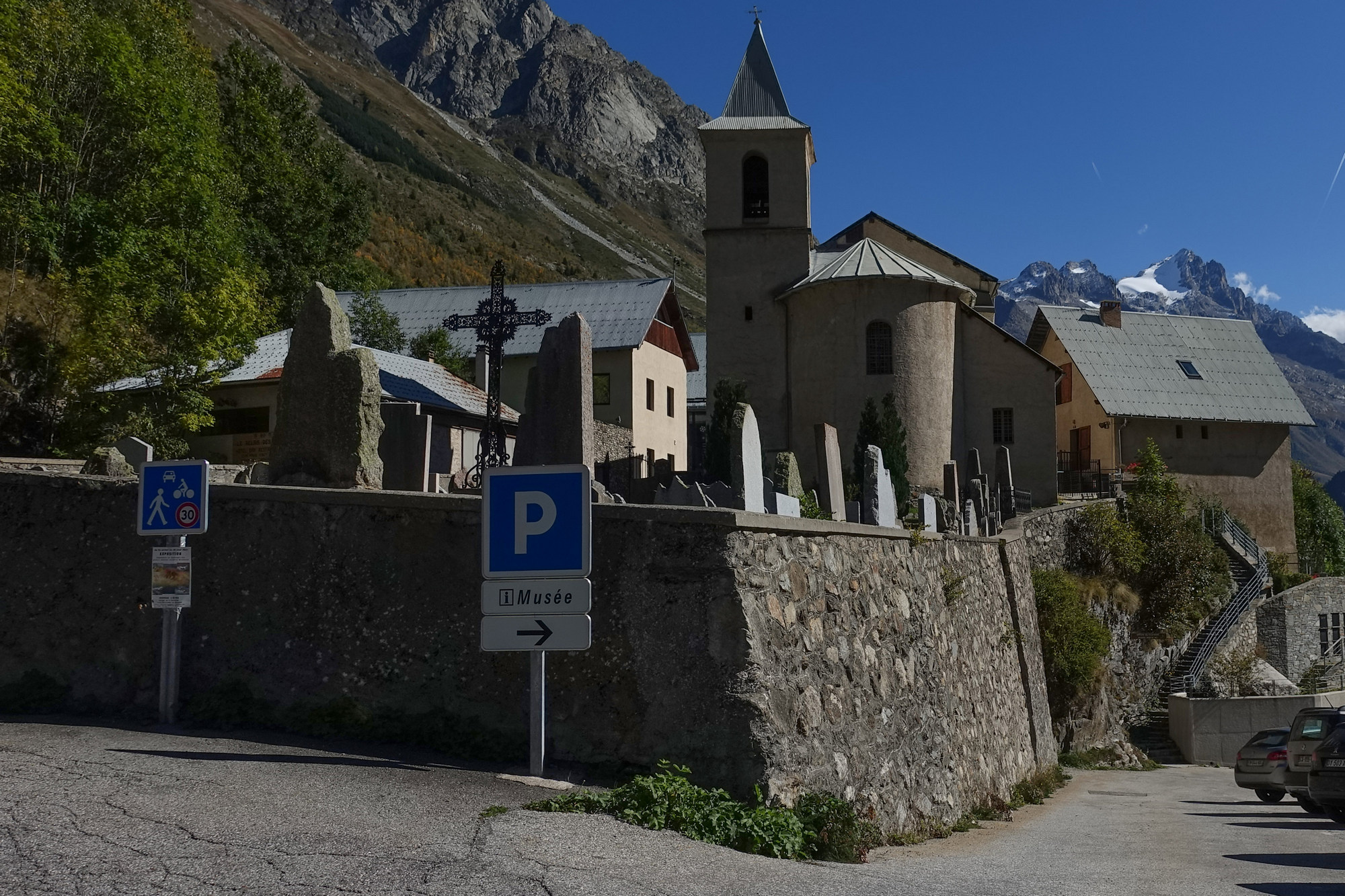 … and, even though I could see no clock, the bell thunderously chimed 3 o’clock, nearly scaring the hell out of me. And then it chimed again one minute later, as they usually do. The bell must have been massive because I could still hear it resonating quietly as I rode past the church almost a minute after it had chimed. Also it’s good to know that I still seem to have the knack of arriving at villages exactly on the hour!

I’m making frequent stops. Every now and again I remind myself that I could turn around at any point and just descend all the way back to base. But I’m hoping that the worst of the steep gradients are over. I still have 6 miles to go, and that’s a long way when you’re going uphill! I have now used up all my energy gels and I’ve had my half a peanut butter sandwich. All I have left is a small fruit cake. I still have a whole bidon of water, so that’s no problem. Obviously no food will be required on the return.

The worst thing about coming up those steep climbs I just did was that I was in the baking sun the whole time, which is good in a way because it means I’m not being shaded by the mountains. In fact I seem to have climbed so high that the the sun is no longer in danger of dipping below them. Anyway I must press on and see how far I can get.

This last report coming from La Bérarde. . The last section to La Bérarde was reasonably flat. 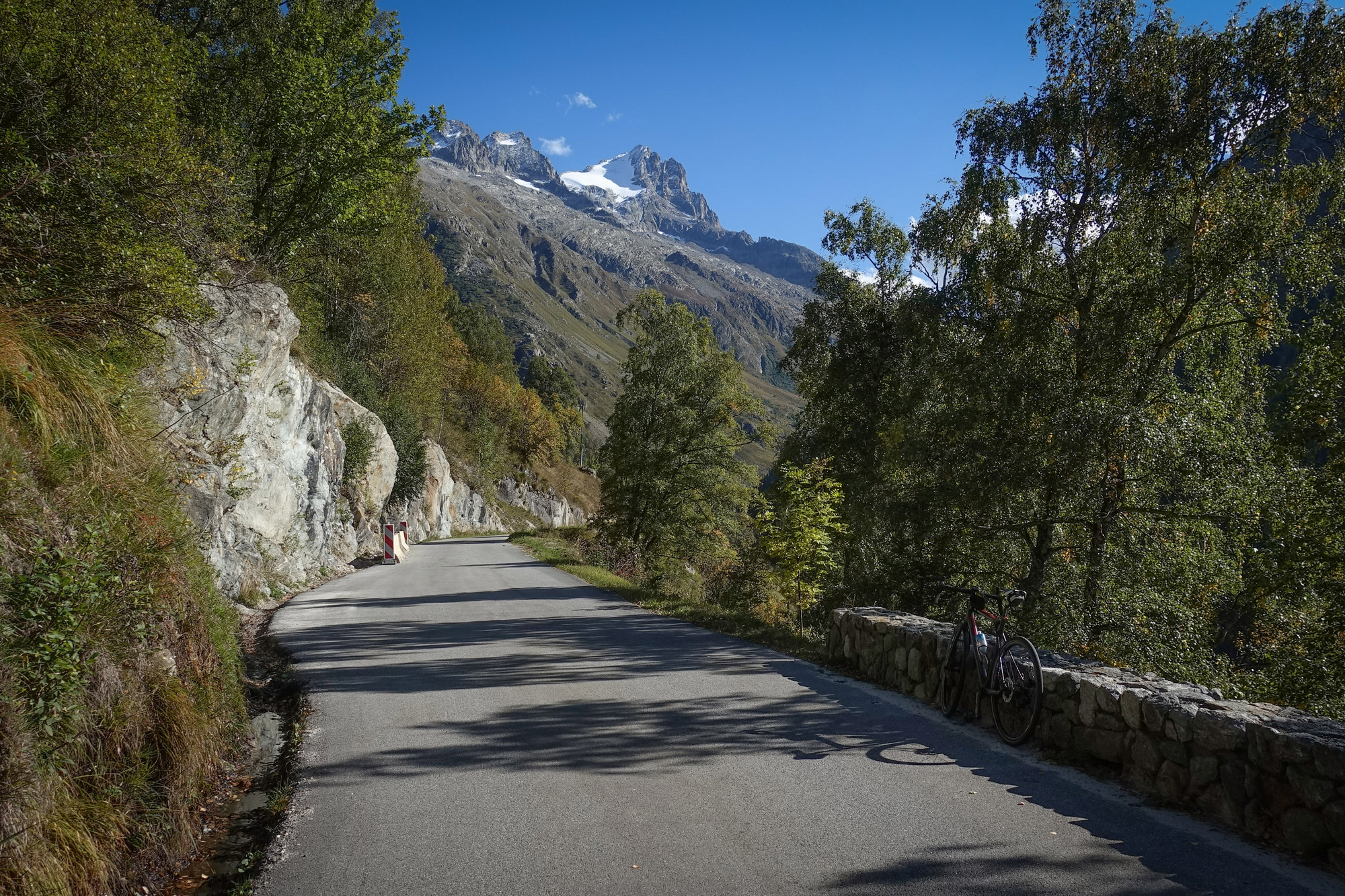 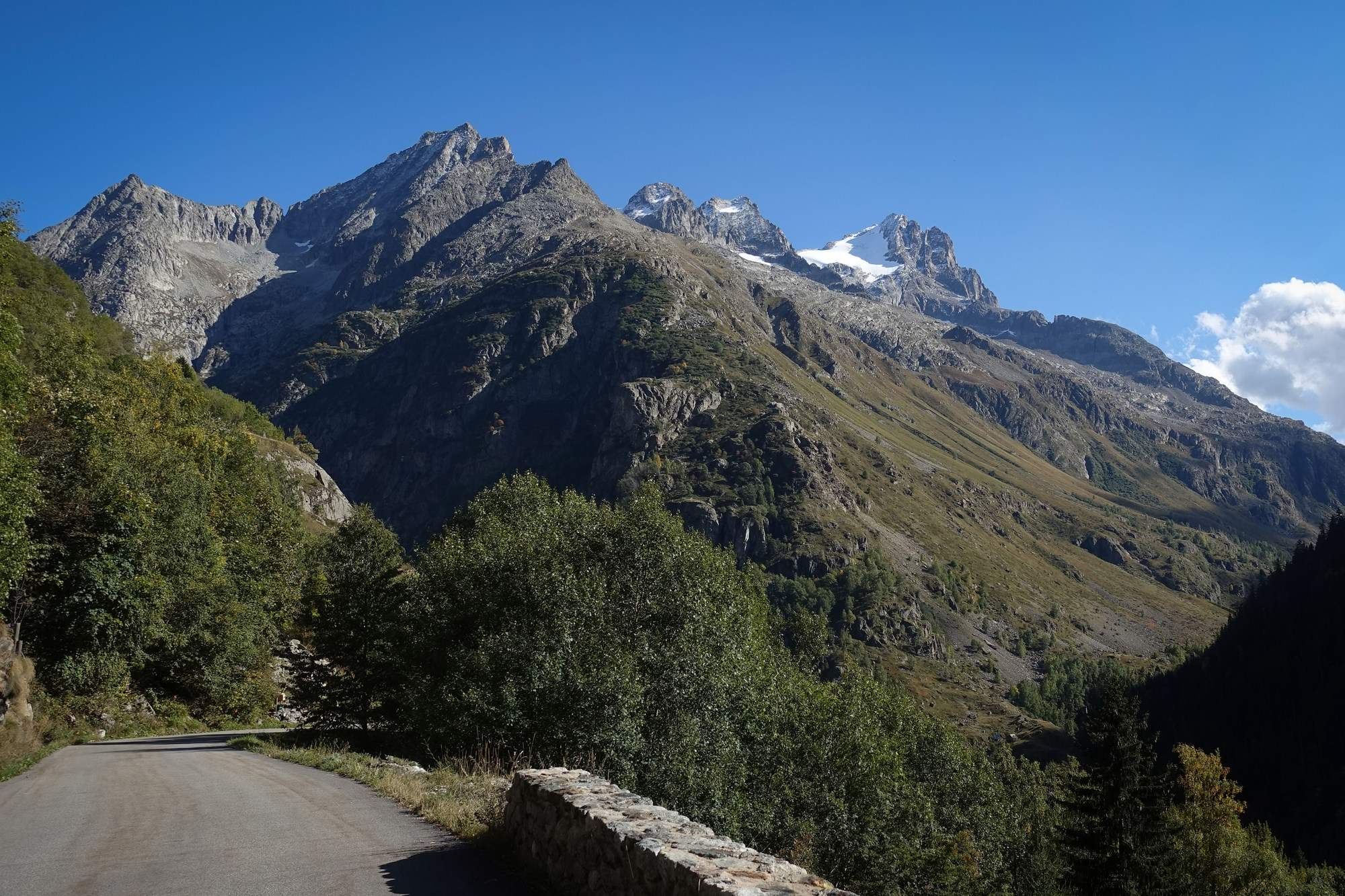 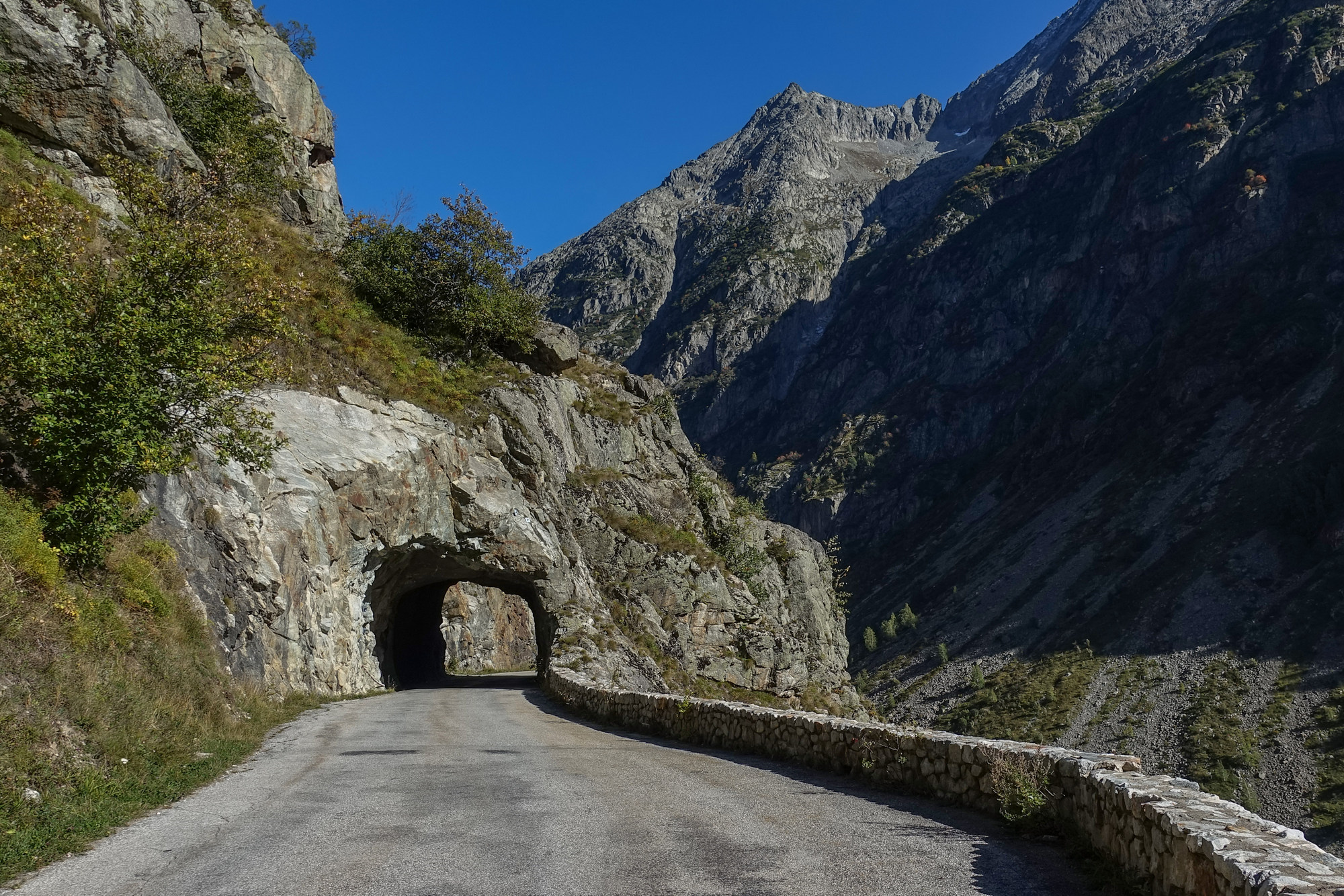 I don’t want to seem ungrateful to the gradient signs but I didn’t like seeing the signs when they said it was a negative gradient, indicating I was going downhill there, because I knew that meant having to climb back up the hill on the way back and I’ve just about run out of energy – I want the whole return to be downhill.

That last section of the route into La Bérarde was dominated by the loud rushing of the river to my right and the sporadic loud rushing of waterfalls spewing out of the mountains on my left. So quite noisy really! As I got into La Bérarde I was following my Garmin and it took me to what looks like a campsite area but with an extremely rocky surface, not gravel –  rocks, and I’ve just run out of patience to go the few extra yards to see whatever is at the end of this thing. 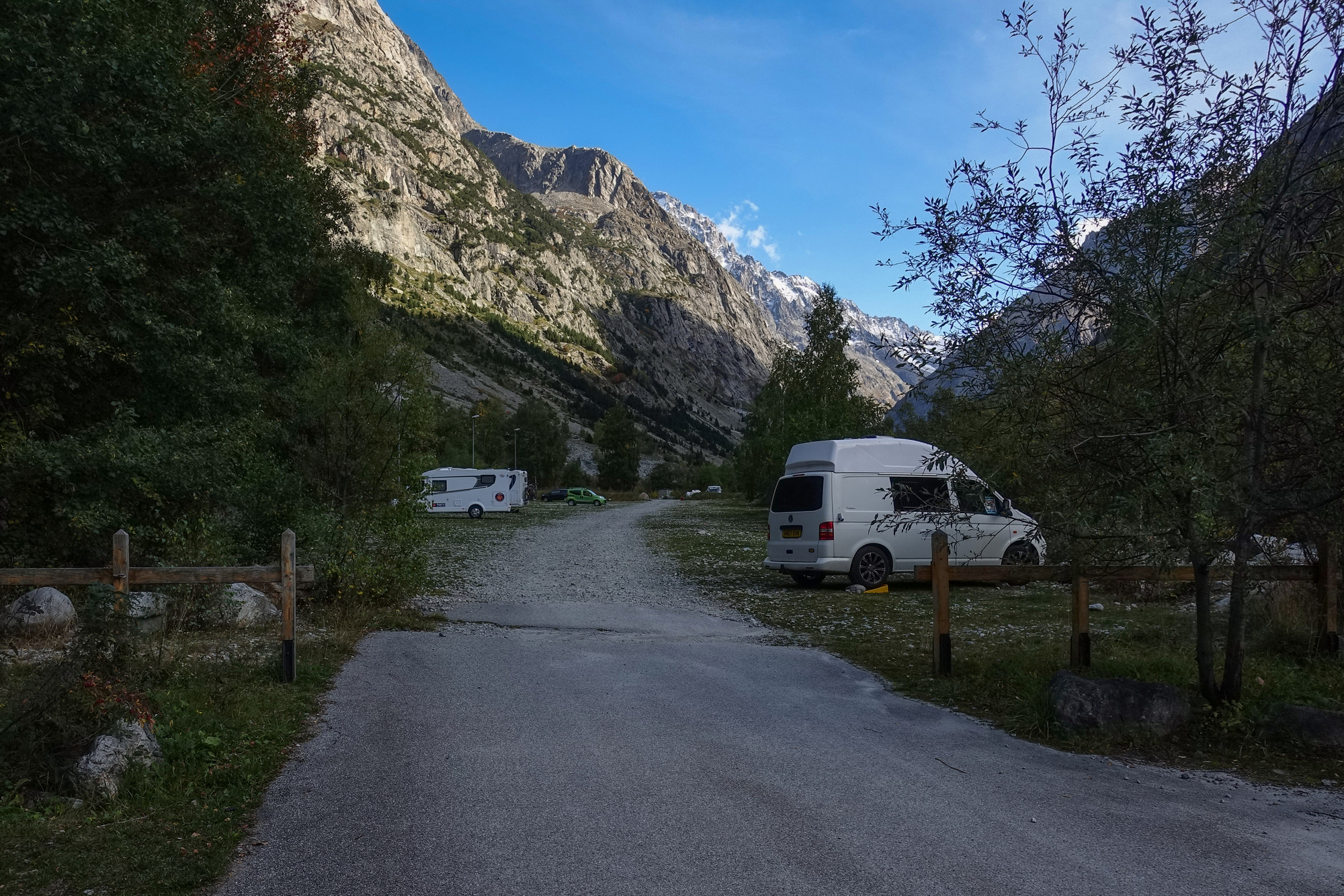 So as far as I’m concerned I’ve done the journey – that’s what the main part of this was all about and now I’m going to turn around and go back home after donning all my warm gear like a snood, skullcap and rain jacket and I’ll eat my fruit cake before leaving as well.

Report from back at base

The descent on the return was wonderful. A lot of it was in the shade, as the late sun dipped behind the mountains. 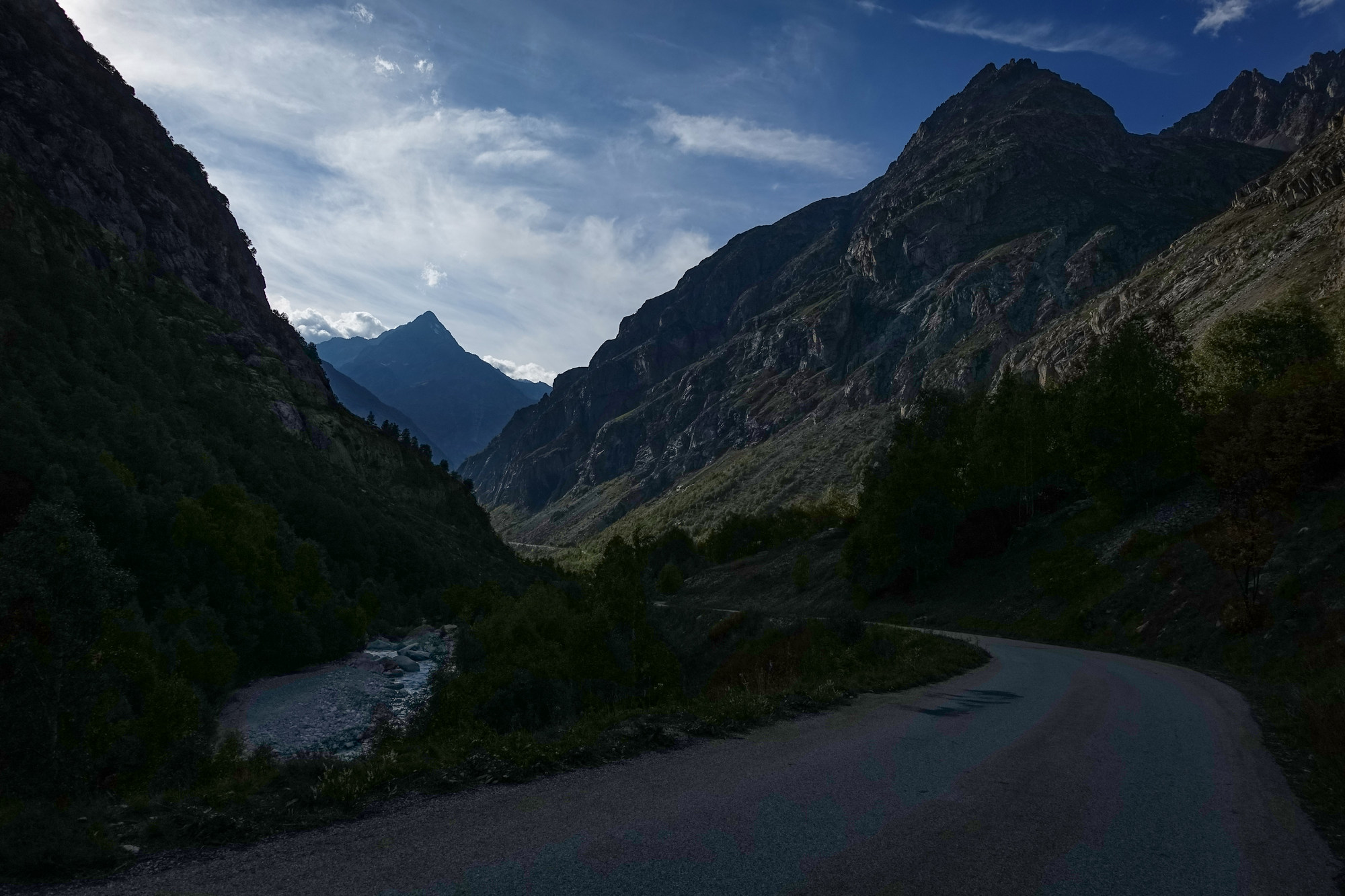 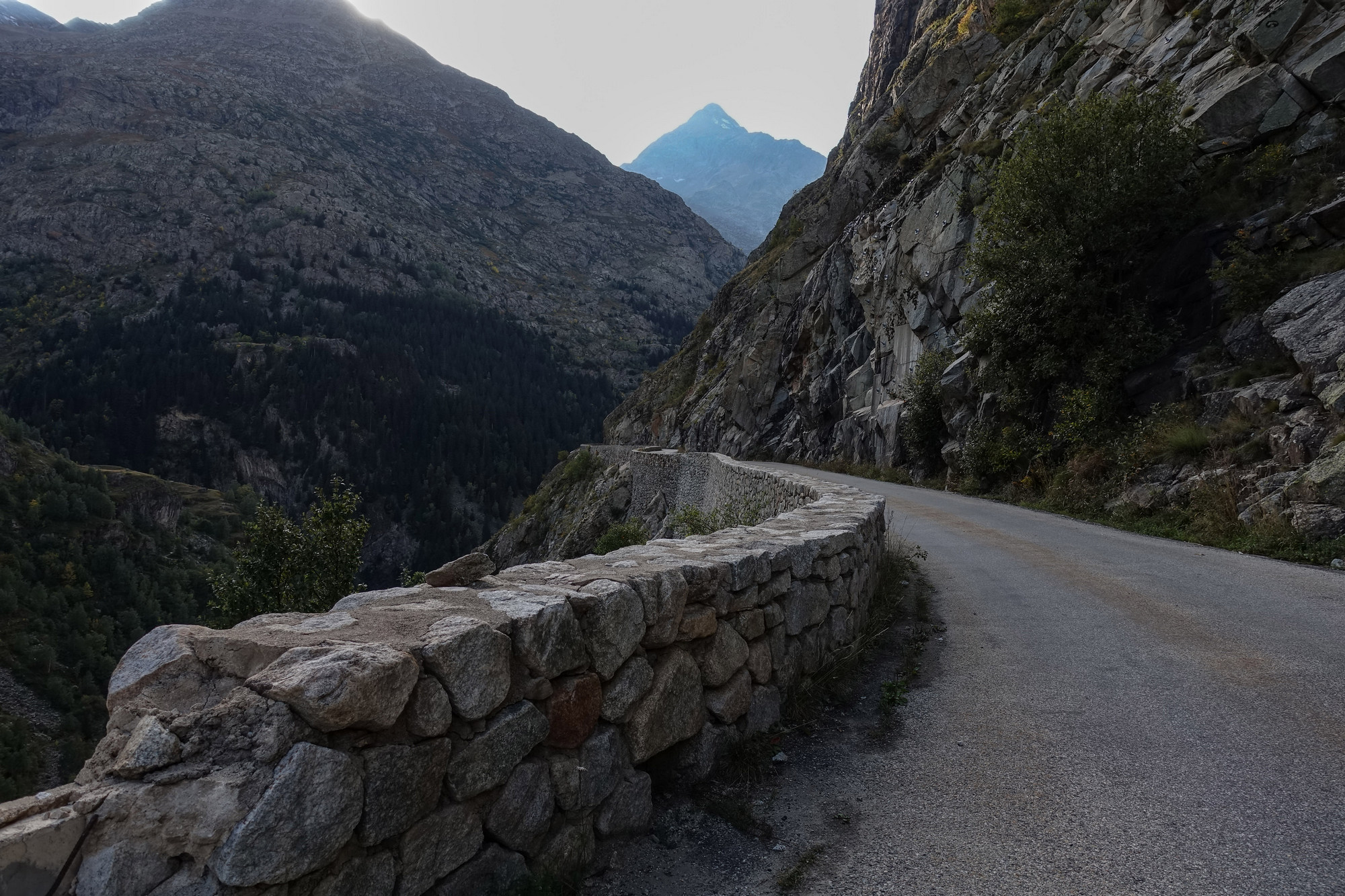 The short uphill bits were no problem in the end. Another cyclist was descending too – I would overtake him when he had stopped to get a photo. Then he would overtake me again while I was stopped for the same reason. As I came into the village with the church, I caught sight of the clock, which I hadn’t seen before. 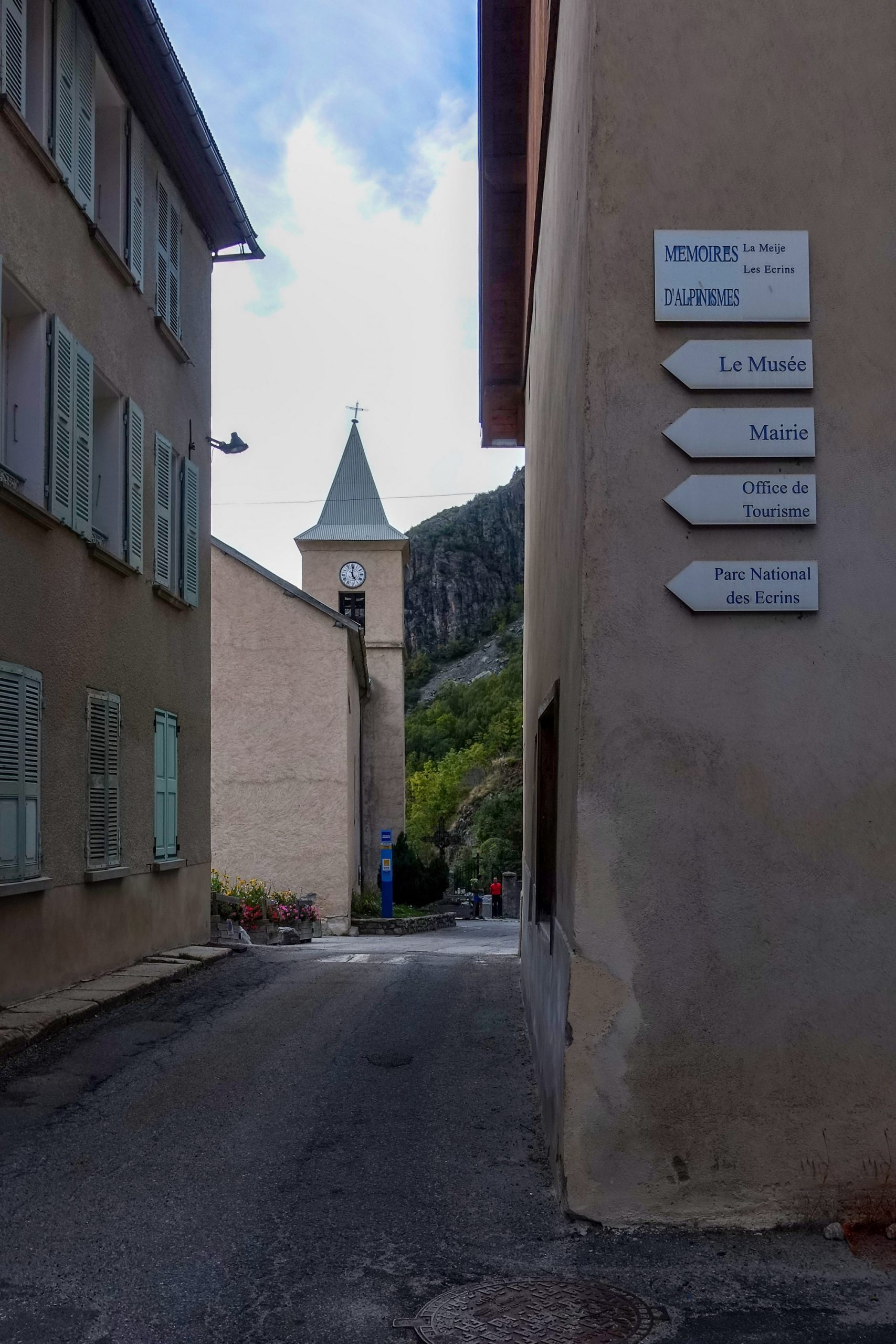 Well blow me down if it wasn’t exactly on the hour again! 5 o’clock. Just as I got a photo, it chimed loudly. It was good because I’d estimated that the return would take less than an hour and I wanted to be back around six. So 5 o’clock was ideal.

The scenery was spectacular, as it was on the climb, but the sun had now moved round a bit so the views had changed. 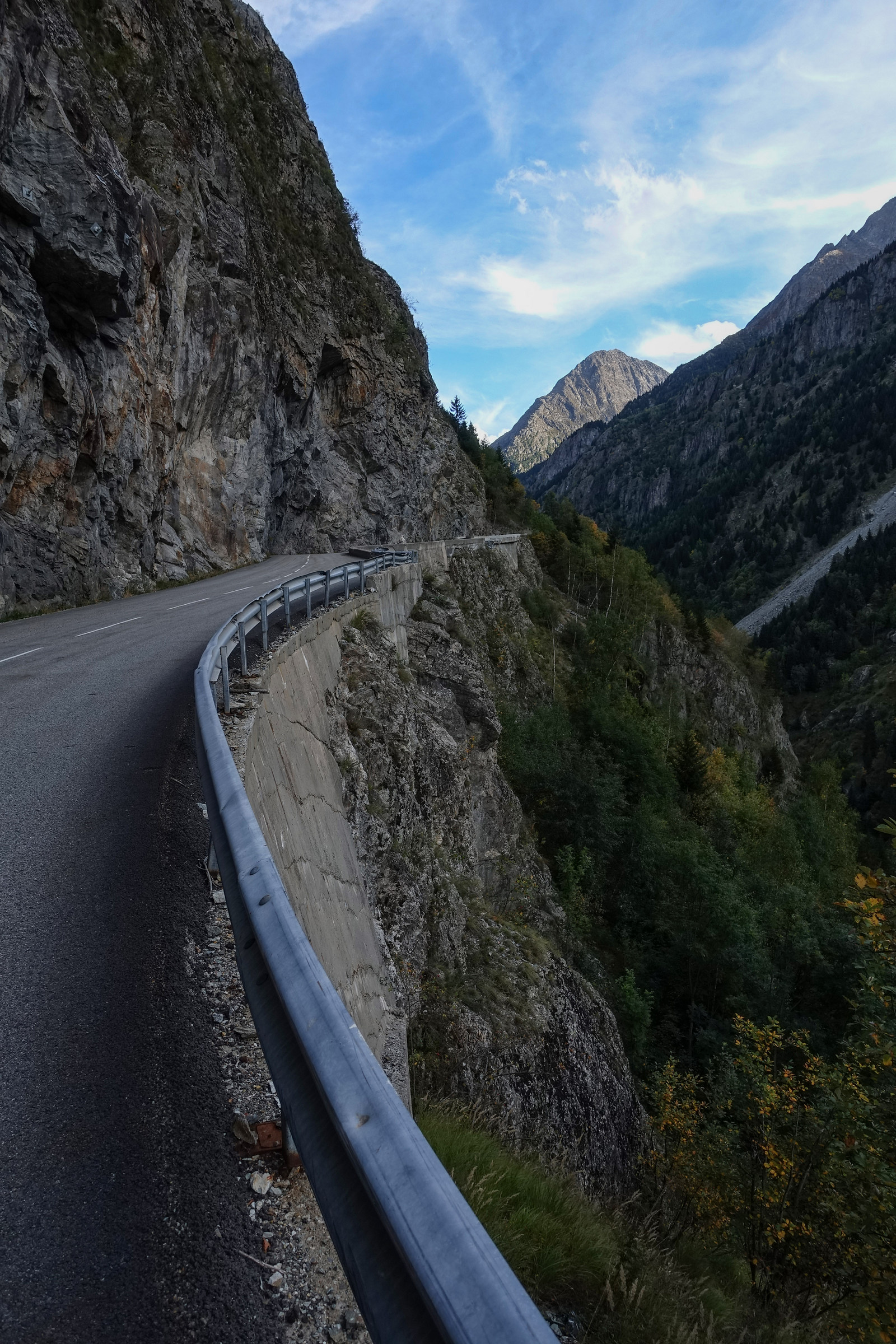 I wasn’t too cold either. Once again, disc brakes are great on descents. Those switchbacks I’d climbed earlier seemed even steeper now. In fact you can really tell how tough it has been on the ascent when you come to go down the same gradients, your brakes on nearly the whole time. On that 10-12% section down into Le Bourg d’Arud, I had the sudden urge to sneeze – I’m not sure if that’s ever happened while riding before. Anyway, the gradient was so steep I couldn’t let go of the brakes so I just had to sneeze into the air! Luckily it was a dry one… Eventually the road I was on joined the flat main road back to Le Bourg d’Oisans. That section had a cycle path marked out on the edge of the road. It’s certainly geared up for cycling round here – which makes sense to encourage the tourists. Three miles later I was back to the van. This time I felt OK. I had taken a pain killer before leaving for the ride and another one during the ride. How many cars had I seen on the road to La Bérarde? Maybe one every 15 minutes – if that! It was a lovely ride into the mountains.

I just found out that La Bérade has a long history in Alpine Mountaineering circles. There’s a good, brief description here, in English: