The first port of call for my cycling tour this year is Bourg d’Oisans. I have planned a few rides using this as a base. Although it’s not the ride I’m most interested in, Alpe d’Huez is certainly the most iconic, its 21 hairpins having a long history featuring in le Tour. And so as I’m parked right at the foot of the climb, I may as well get it out the way. To add a bit of interest I designed the route to go about 3 miles further than the official finish and head towards some attractive lakes near the Col du Poutran.

After putting a new chain on my gravel bike (the previous one wasn’t long enough to cope now that I have put the 52T chainring back on, paired with the 36T rear sprocket) I got ready and was ready to leave at 11am. I decided to take just one bidon after reading online that there was eau potable (drinking water) available at hairpins no. 7 and 21.

Outside my van, I got chatting to a guy who was also getting ready to leave for the climb. After speaking broken French to each other for the following few minutes we realised that we were both native English speakers. He was from Canada on a tour of Europe and he said he might not ever be this close to Alpe d’Huez again  so was eager to tick it off his bucket list while he had the chance.  So I wished him good luck and set off.

The weather was glorious. Wall-to-wall sunshine and no wind, but a slight nip in the air. I was wearing a base layer and a short sleeve jersey with arm warmers. However, about 300 yards up the road the chilly air persuaded me to turn back to the van and change into something warmer. So I put a long sleeved roubaix top on. I also wore long-fingered gloves, a snood and warm socks. Additionally I carried with me a skull cap and rain jacket for the descent. I assumed it would be much colder at the top and certainly very chilly on the descent.  So I set off again.

I had no illusions about doing this climb in one go without stopping, not with my current levels of unfitness. The first 2k are at 10% gradient. Needless to say I was in 1st gear. All the hairpins are numbered counting backwards as you climb. 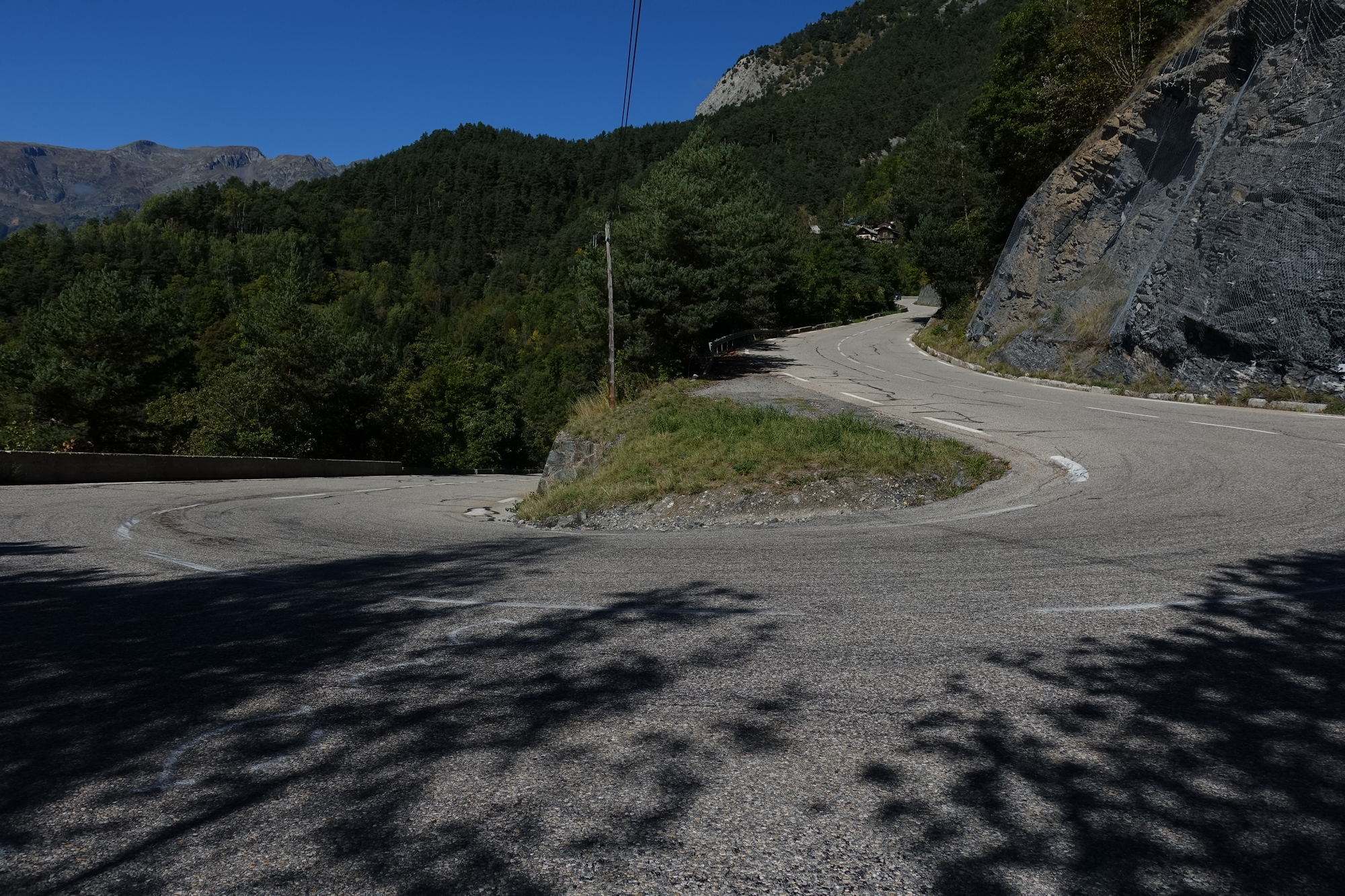 The first one was no.21. At  no. 18 I stopped for a breather and also to get a photo of the glorious view of Bourg d’Oisans, now already far below. 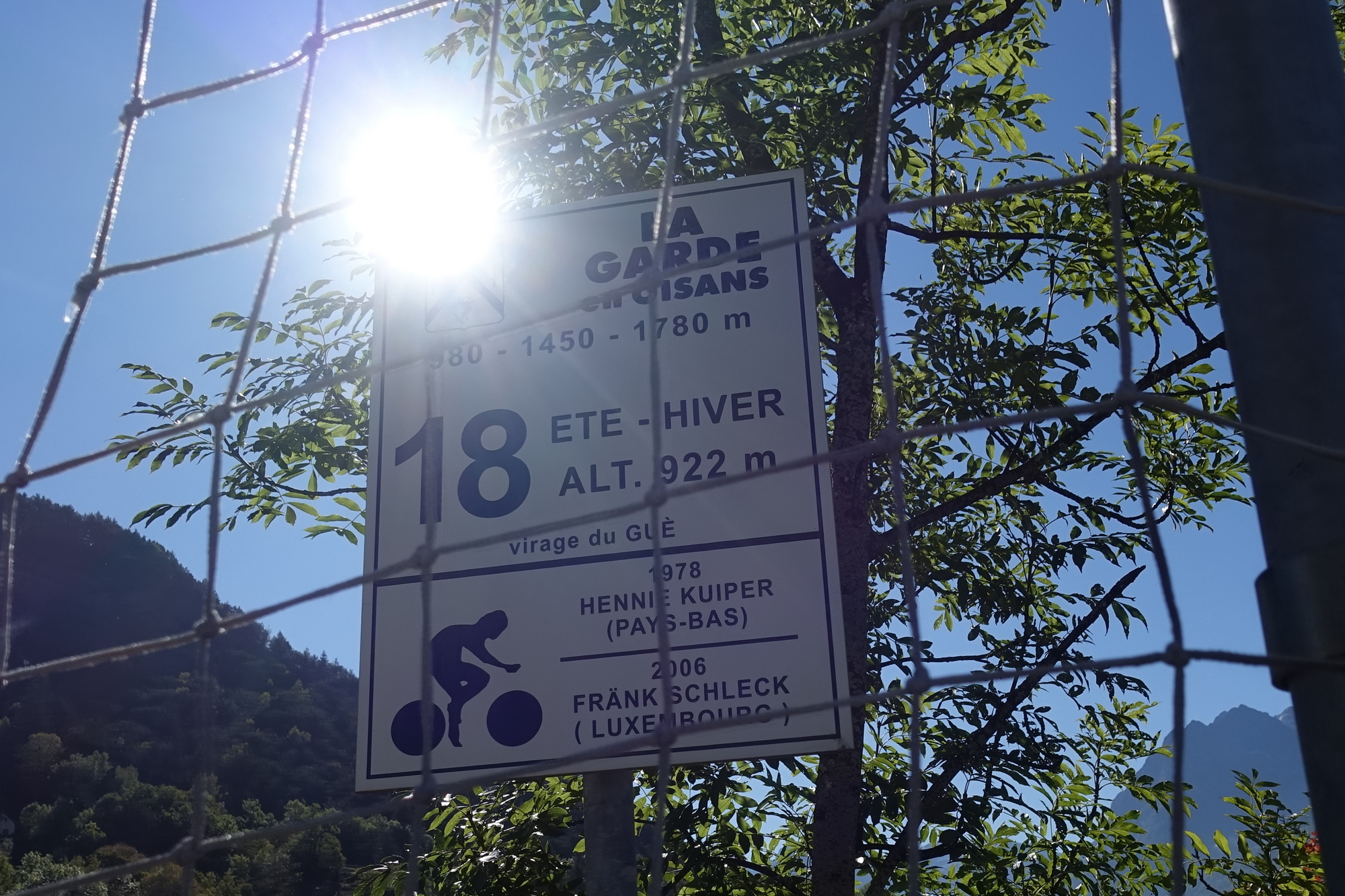 Every couple of hairpins I stopped for photos. The signposts are a really good way to let you know your progress.

One thing I had quickly realised is that I was now over-dressed. Consequently, with the sun blasting down on me for most of the ride, I was cooking inside my warm jacket. On top of that, I realised that I had forgotten to bring painkillers to ward off the almost inevitable headache that I would get due to being baked in the sun.

I saw only a handful of other cyclists all day long. Once the 10% section was over it became markedly simpler when the gradient pegged back to only 8% or so.

I eventually reached hairpin no. 7 where I stopped to top my water up and grab another photo. 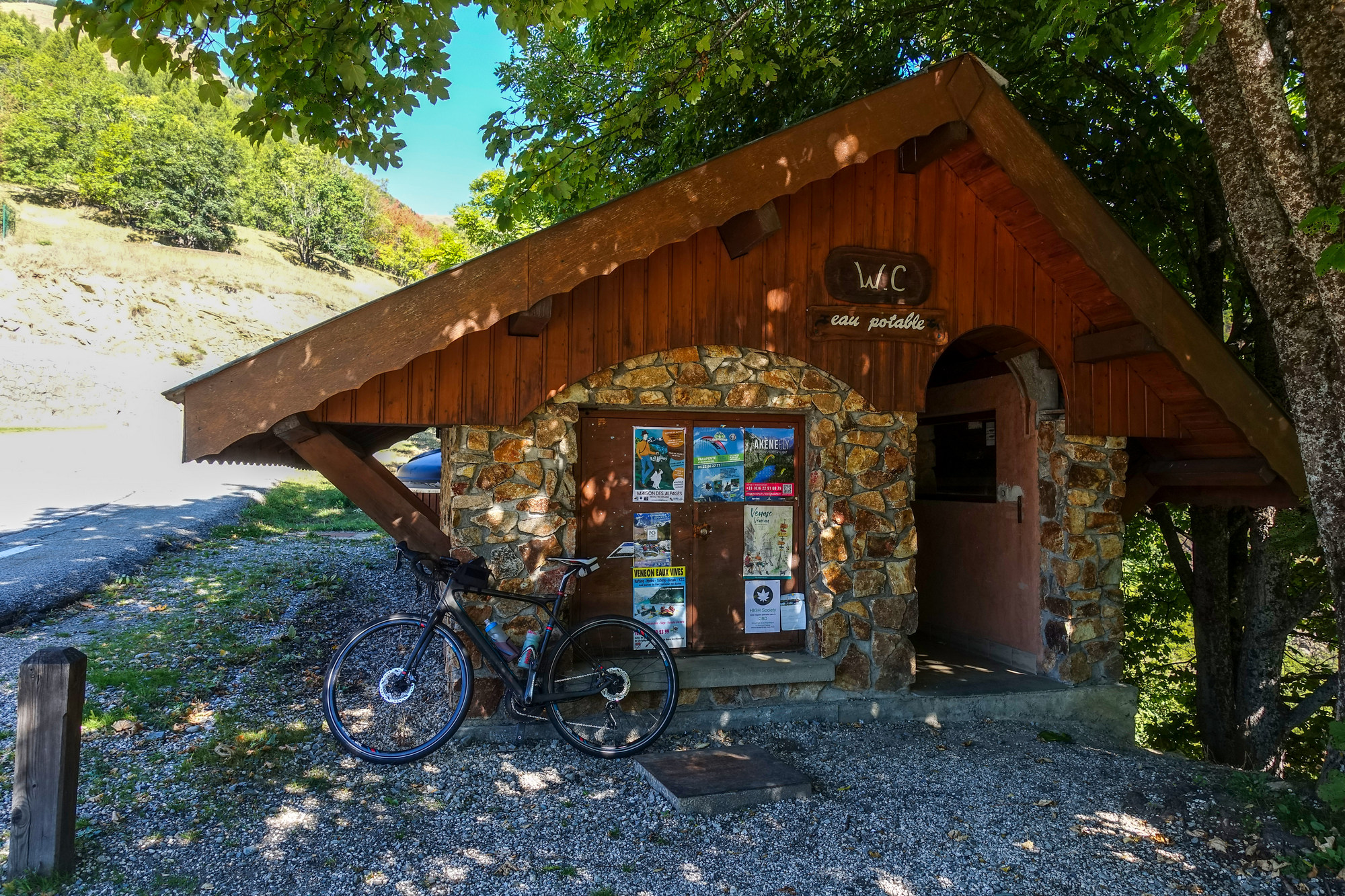 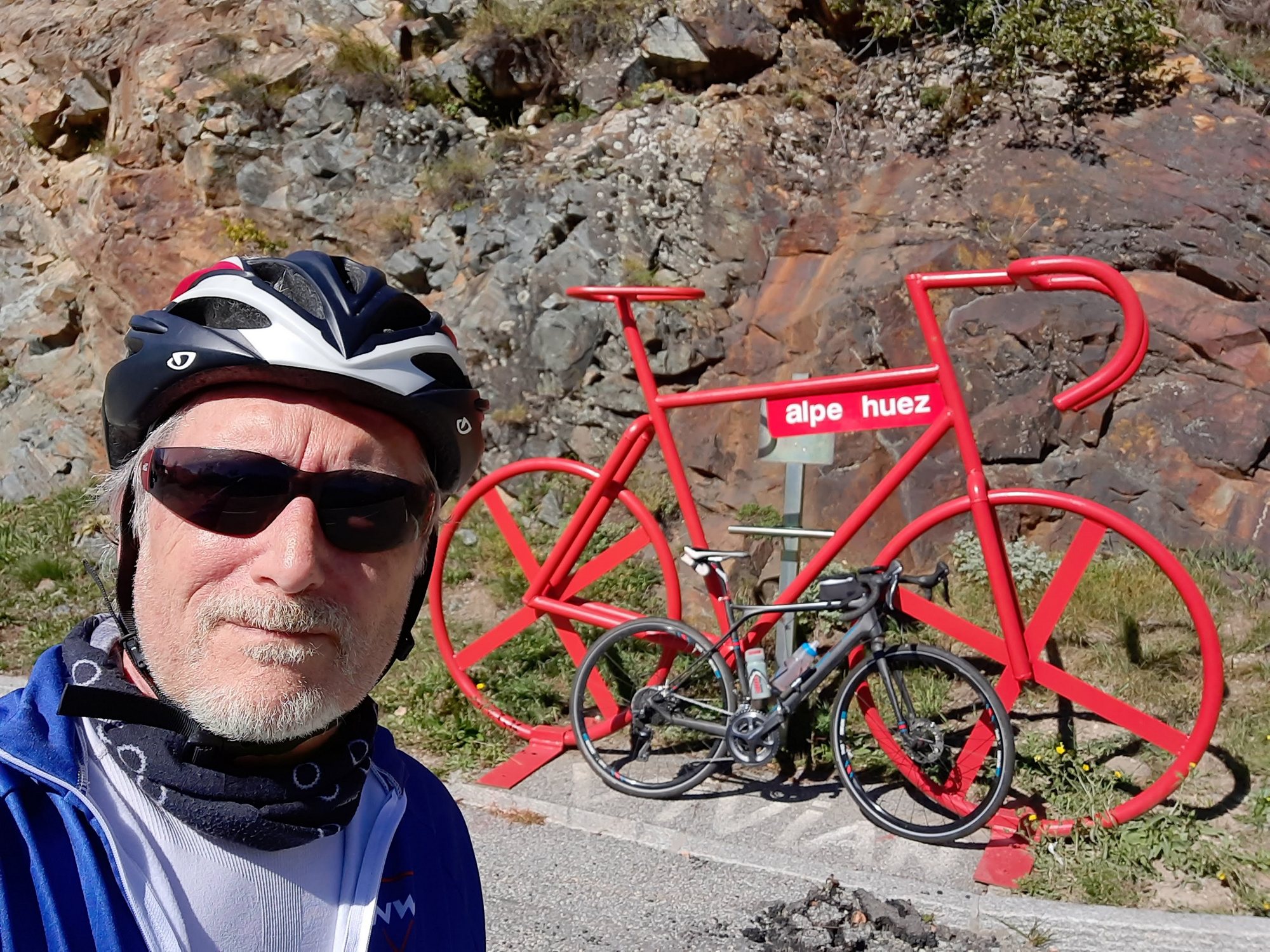 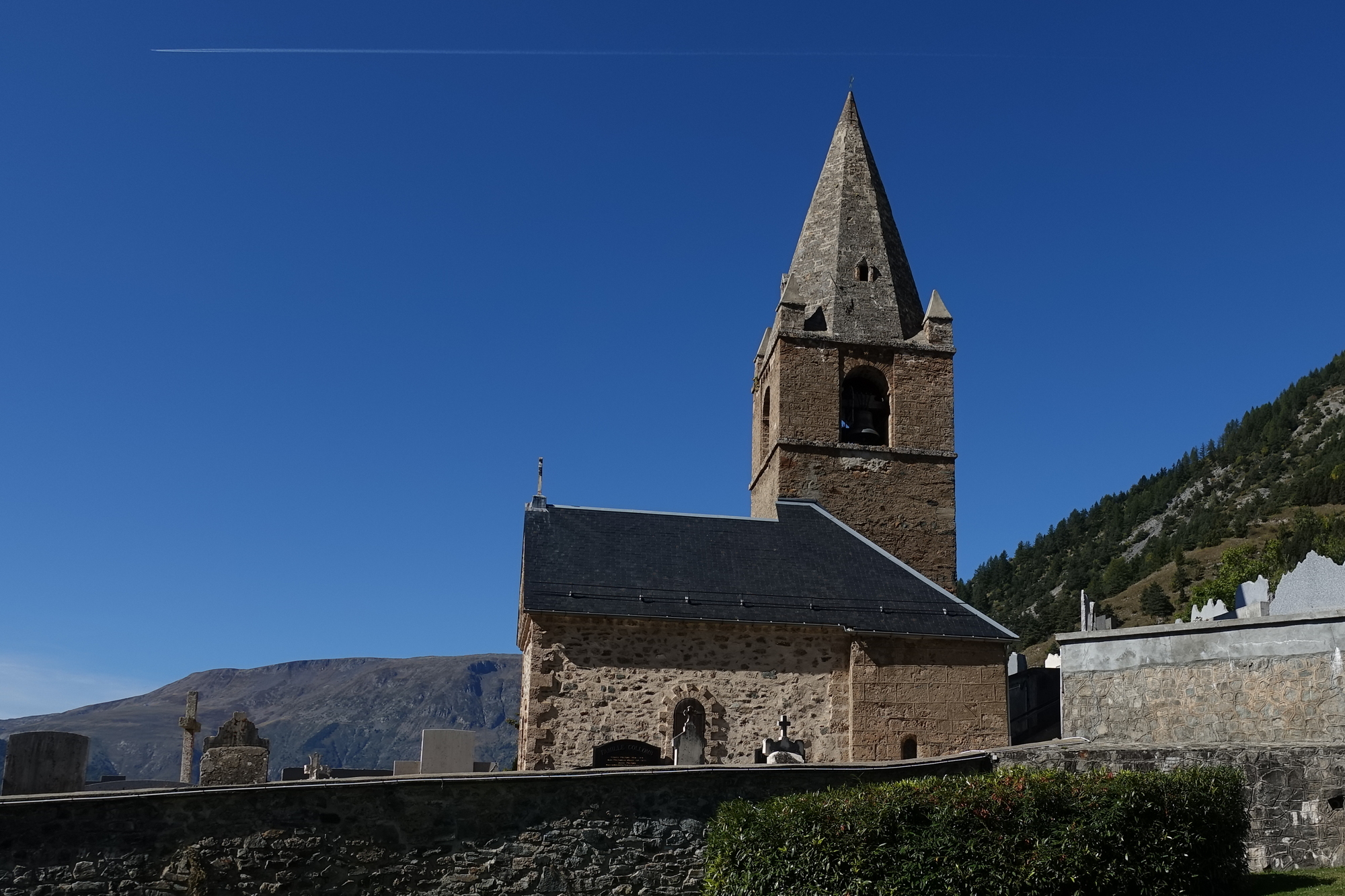 It was at this point that my Canadian friend caught up with me. We exchanged a few words and he cycled on ahead, having slightly better pace than me. We met up again at another hairpin rest and did the rest of the climb practically together with me tending to be ahead. At one point I took my snood and gloves off and stuffed them in my back pockets. I was just too warm. Conversations at other stops covered such subjects as Ski resort design and twin-axled lorries navigating switchbacks! By this stage we could see the built-up area of the Alpe d’Huez ski resort up above us. 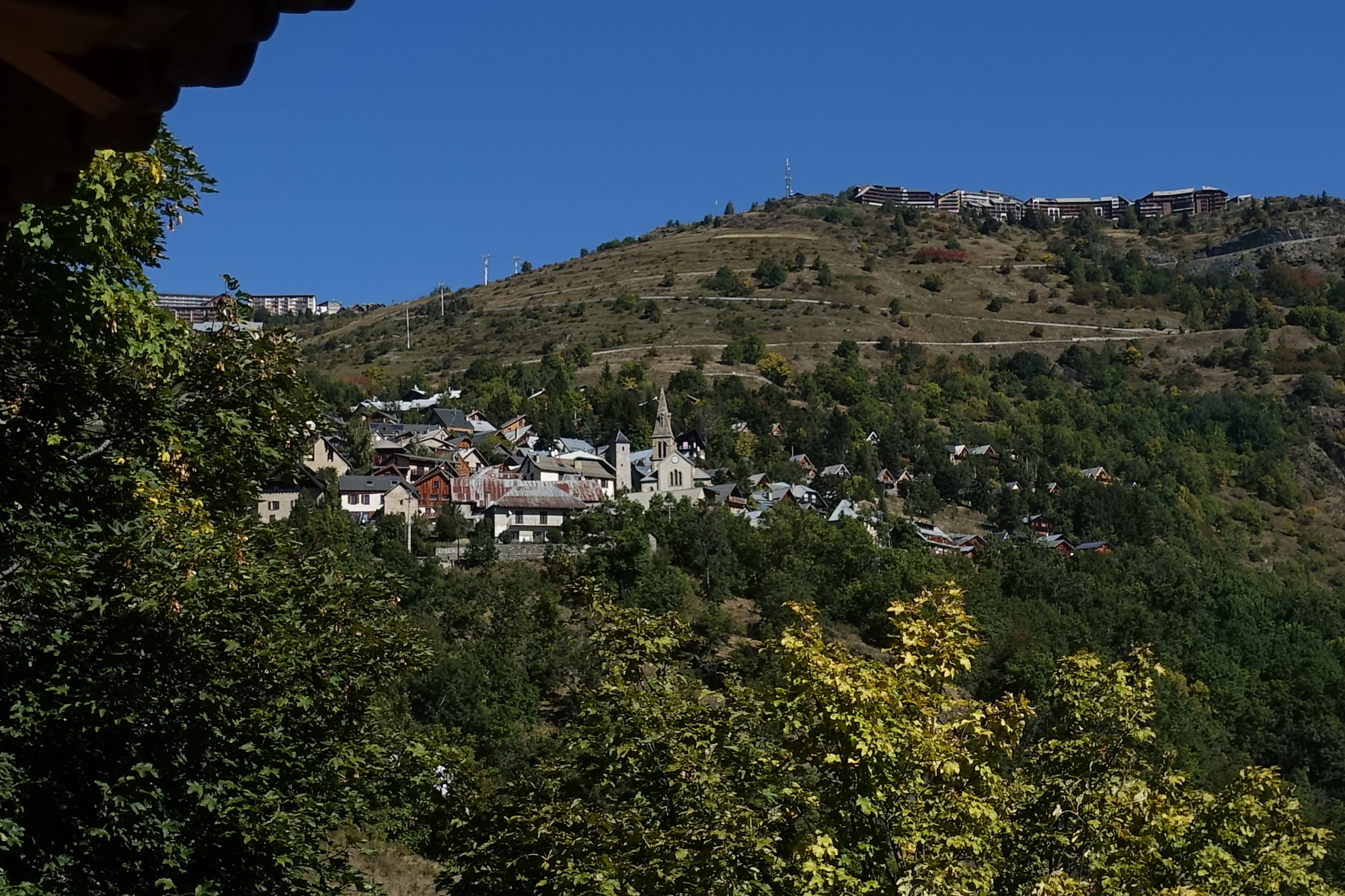 It certainly wasn’t pretty and got worse as we approached the finish, with much construction work in progress. As we came into the streets and shops that made up the resort we couldn’t see where the actual finish was. I just kept riding. Eventually I realised I had passed through the whole resort so I thought I might as well carry on towards the lakes, alone. From that point, the road swept out in front of me with not a building in sight, and it got more peaceful as I drove away from the construction work on the resort.

The gradient was easier but I had so little energy left that I was finding it a real struggle. I could see the road stretching out ahead of me and I thought I’d carry on as long as the gradient didn’t get any worse. There came a point where I could see that the road got steeper in the distance so I gave up my plan of seeing the lakes. Instead I thought I’d head towards what looked like a pass. It looked like it was a gravel path but when I tried to ride on it  my tires sank into the surface because it was some sort of cinder path. Not to be deterred, I got off my bike and walked it the rest of the way. 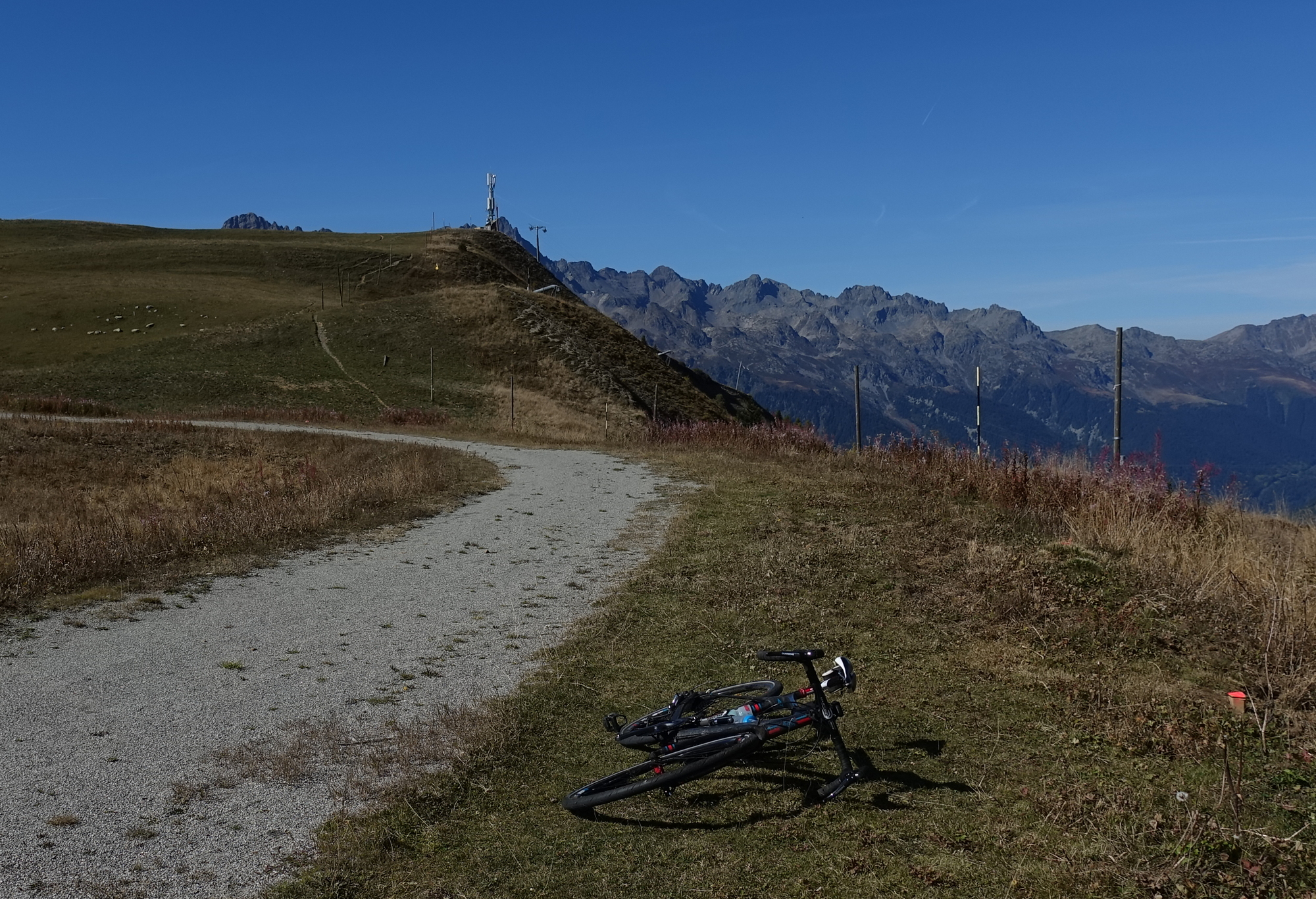 I was now out in the middle of nowhere, the only sounds around me being the noisy grasshoppers. The path led to a massive view down the other side of the mountain towards Oz-en-Oisans. 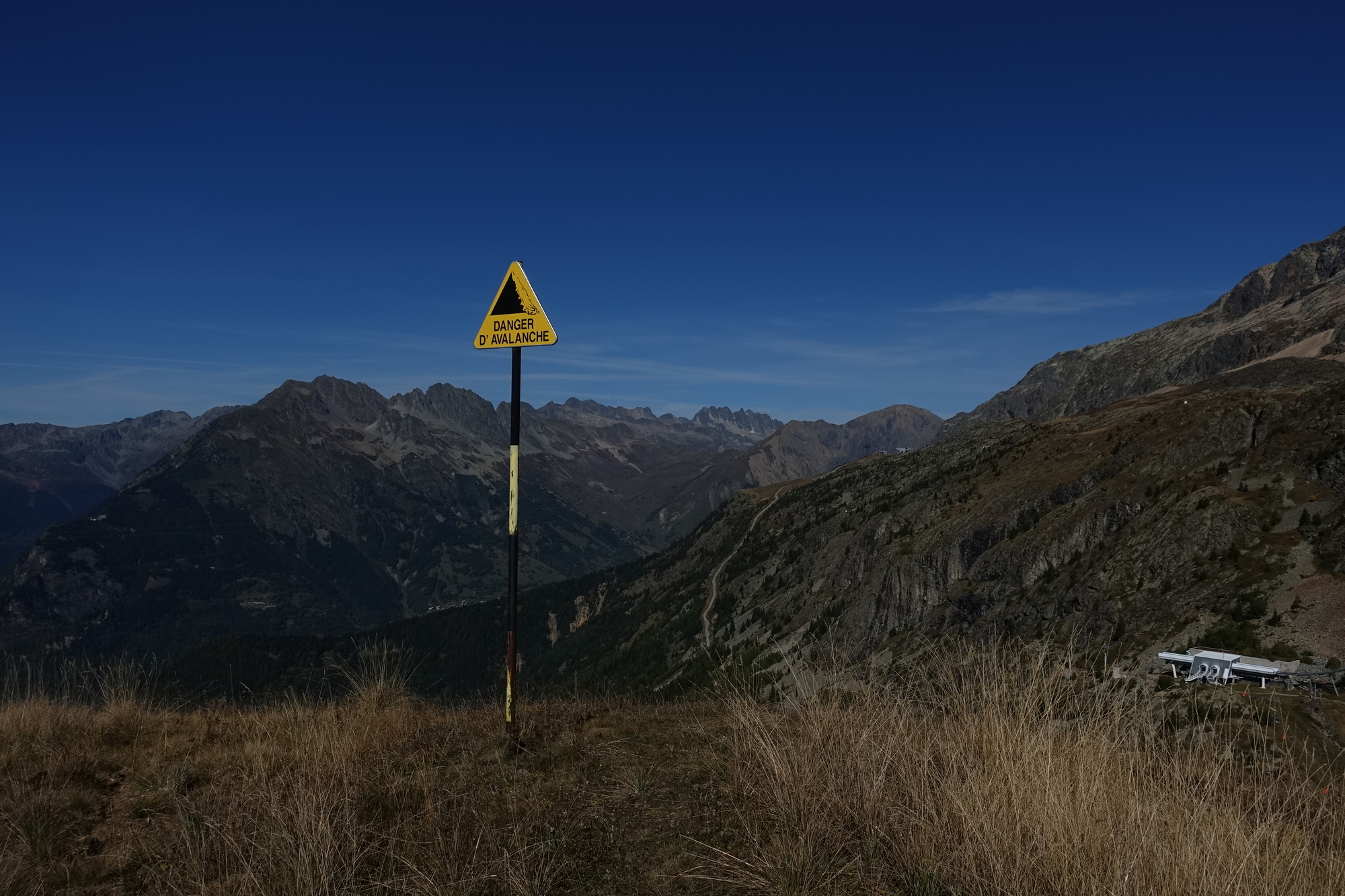 I got some photos, walked back to the proper road and rode back down towards the Alpe d’Huez ski resort. I was now feeling completely done in, with a neck/head ache due to the sun and exertion. Riding back through the resort I saw the sign that I’d missed on the way up, that signified the end of the climb, so I stopped to get a photo. 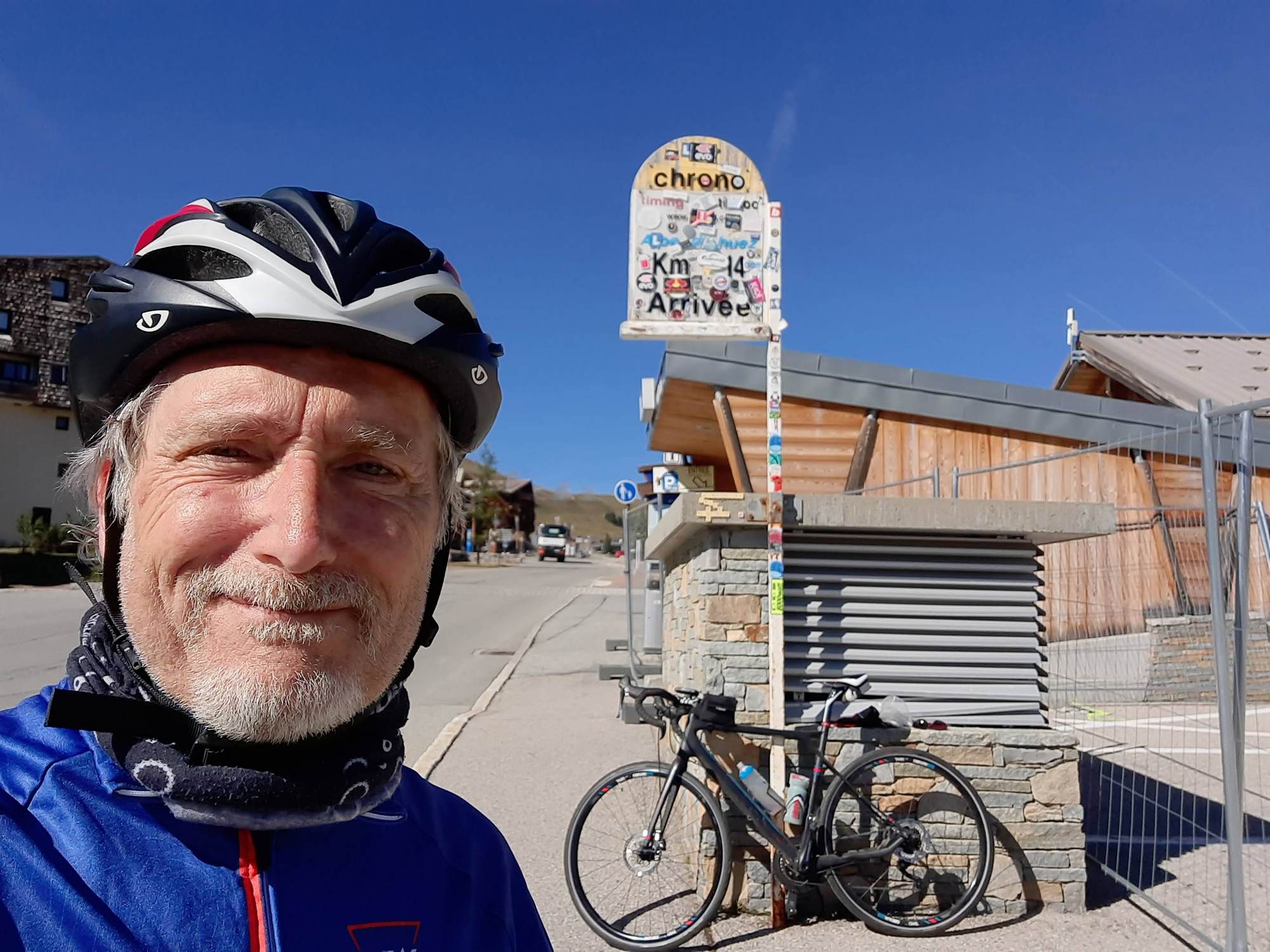 I also put my snood back on and my gloves and my skull cap and my rain jacket and started the descent. And now I was pleased that I had the warmer clothing on. My headache was such that every time I hit a bump in the road it would send a spasm of pain through my head, so I tried to avoid all potholes. Descending with disc brakes is pure pleasure compared with rim brakes which tend to overheat if you’re not careful.

I overtook a string of cars that were backed-up behind a huge slow-moving construction lorry. Minutes later I could still see the lorry on hairpins way above me as I distanced myself from it. I realised that my hearing was getting more muffled the lower I got. Obviously connected with the rise in pressure. I’ve never had that before on a descent.  Eventually I wound my way down to ground level again and back to my van. By this time I was practically deaf!

The Canadian was there, packing his bike into his van. We had a long chat about various things before I bade him farewell. I climbed back into the comfort of my motorhome and immediately took some painkillers. My legs actually didn’t feel too bad and I was pleased to have been able to complete what was quite a tough climb.