I was in the mood for a new challenge. After consulting Simon Warren’s book, , and reading opinion on the internet, I decided that Chalkpit Lane was to be the target of today’s ride. In the book he describes it as his favourite climb in the South-East, and a cycling buddy advised me thus: “Chalkpit is an amazing climb; it’s a piece of an alpine pass stuck on the side the M25. Do it!”. That was all the encouragement I needed!

I was keen to make it as easy as possible so I elected to take my lightest bike. In fact, that morning I weighed my bikes:

I also decided to take smaller bidons (600ml vs. 750ml) and to not take my camera. Purely out of wonder, I even weighed my helmets:

The problem was that I couldn’t be sure I would be able to climb Chalkpit with the gearing on the Colnago (30T cassette), so I decided to err on the safe side and fit the 32T SRAM cassette from my Defy. Eventually I was ready to set off on this route:

The weather was mainly cloudy, with the sun breaking out from time to time. 17ºC, light winds. About a mile into the ride I realised I didn’t have my mits on. Oh well, that’s another weight saving, I mused. Also I soon became aware that the gears were not shifting smoothly, probably due to fitting the different cassette. So, while waiting for the level crossing at Teston to open, I rode around the car park there and electronically adjusted them while riding along – Yes! That’s what you can do with Di2! [On a previous ride I had been frustrated with the gears not changing properly. I knew they were adjustable electronically so I vowed to RTFM as soon as I got home. Thankfully, today I still remembered how to do it.]

Even though I had the extra low gear from the SRAM cassette I decided to attempt the whole ride without using the lowest gear. That way I could be sure of climbing these hills in future with my other cassette. The first bit of excitement on this ride was Carter’s Hill. Worryingly I found it quite a bit of effort climbing the small 6% ramp that precedes the main hill! I don’t know what that was all about because I climbed Carter’s with no problem in the end. And I hadn’t used 1st gear, so I was sticking to the plan.

I knew that Chalkpit Lane was 28 miles into the ride, so I was keeping my eye on the Garmin, psyching myself up for it. I stopped about 6 miles before it to have a Mule Bar, and then at every mile interval after that I lobbed a jelly baby! Eventually it was upon me. You can read all about it in a separate post. 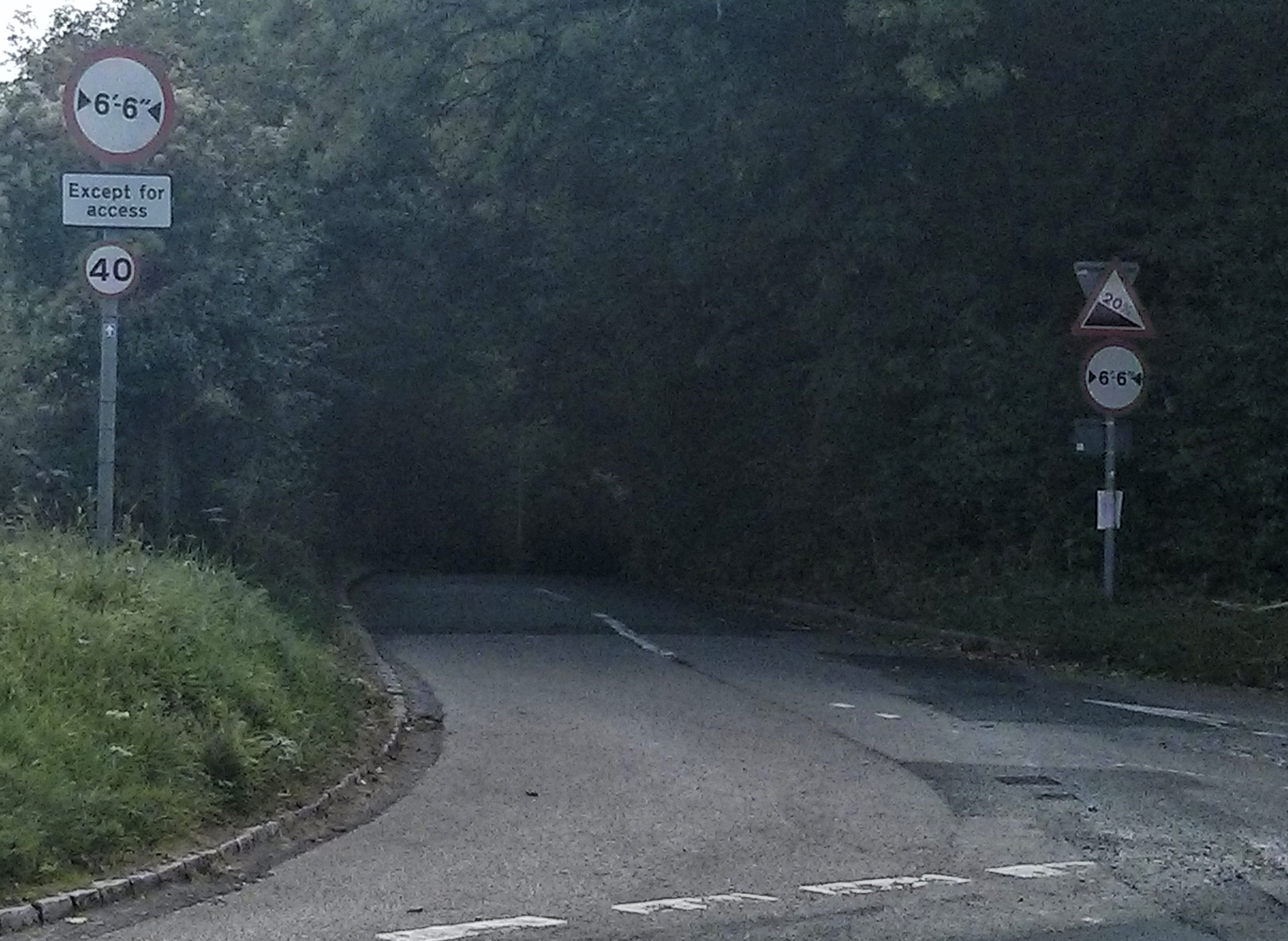 It was a long and steep hill for sure but it wasn’t a lung-buster like Cob Lane or York’s Hill. While planning this route I realised it passed the top of White Lane. So I thought I’d pop down Titsey Hill and climb back up White Lane. What was I thinking? It came less than two miles after Chalkpit, and it is one tough climb. It doesn’t seem steep to look at but it rears up to 18%+ at the end. As a reward there then followed an amazing 3-mile continuous descent into Westerham. I had managed all the hills so far without using 1st gear.

The relatively easy climb of Hosey Hill was followed by a sharp descent and then the 16% climb of Puddledock Lane. I was sorely tempted to use 1st gear on the steep last part of that but managed to resist. I stopped at the Toy’s Hill well to take in the amazing view, and then climbed the steep top part of Toy’s Hill road, also about 16%.

That was the worst of the hills over with, with just Roughway Lane (9-10%) and St Helen’s Lane to come. The wind had picked up by now and was right in my face which made the remainder of the ride a bit of a slog. I managed to get loads of PBs on this ride including Carter’s Hill and White Lane. And I never used 1st gear so I had managed the whole ride on a lowest gear of 28T, which I was pleased about.

Di2 with 32T = OK
In case anyone is wondering, Shimano Ultegra Di2 can run with a 11-32T SRAM cassette with no problems. Make sure you check that the chain is OK when you are in big ring (50T) at the front and big cog (32T) at the rear. When I last fitted a new chain I left an extra link on compared with what was already fitted. That was enough to ensure that the 50/32T combo didn’t rip my dérailleur apart!
MSTina bibshorts + Fisik Antares saddle = not OK!
I have worn this combination a couple of times lately and got saddle sore, whereas if I wear cheap Chinese kit, the Fisik is fine!
Di2 allows you to adjust dérailleur alignment while on the move
As long as you are on a quiet bit of road, you can trim the alignment while riding along. In a way this is better than making the adjustment off the bike because you get immediate feedback from the noise of the chain.
Jelly Babies!
I haven’t had JBs for ages but I took them on this ride and I’m sure they are better than energy gels
Breathe out completely
Something new I tried on this ride while climbing, after reading about it somewhere, was to make sure I emptied my lungs fully before breathing in. Seemed to work…