This is my first blog post of the year, although I have done quite a few rides. In fact this ride brings it to over 500 miles for the year, accumulated from ten rides, including four club runs, although it should be mentioned that one of those rides was just 1.1 miles long and was done merely to complete a Strava climbing challenge which ended on January 31st. I had a particularly good week over the Christmas/New Year period when I did over 200 miles in one week. This time last year I had done precisely zero miles for the year (excluding some TT sessions) due to my knee injury.

The weather has not been great though. Most rides have been very muddy, cold, dark, sometimes windy, sometimes icy, and last week I got caught in a blizzard which made for a miserable return journey.

I should have been using my ‘Winter bike’, but there are a couple of reasons why I have used the Colnago exclusively. The first is that the Giant Defy has a bit of a grungy feeling coming from the headstock when turning the bars, so I need to look at that. The other reason is that the Defy is so totally spic-and-span that it looks too good to take out!

There was virtually no wind today, so I didn’t particularly care in which direction I rode. I planned a route that didn’t include too many steep hills, and used quite a few main roads, which is unusual for me; I just couldn’t face all the muddy, cruddy lanes that I had experienced on my last ride.

It was a cold (5ºC), grey day. This was the first ride of the year where I didn’t wear knee-warmers under my leggings. My right knee had been OK lately so I thought I’d try without them. The ride started off pretty well and I soon had an average of just under 17 mph. Even though I had tried not to include steep hills, there were a couple of surprise stingers in the form of Hayward’s Hill, at 17-18%, and Wilgate Green Road, at 18-19%. The second of those caught me totally unawares – I turned right, and there it was – I was in completely the wrong gear and had to stand on the pedals while I crunched the chain onto a bigger sprocket – I hate doing that. Both hills were mercifully short.

I reached Hernhill with an average of 16.3 mph 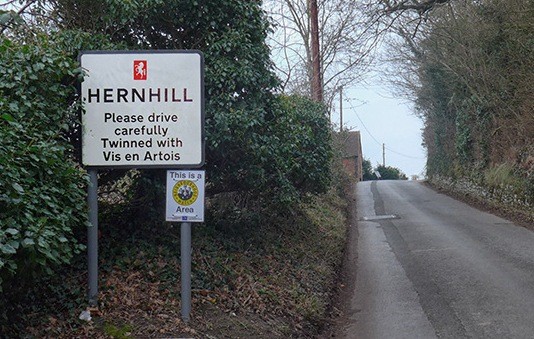 Beyond Hernhill things started to go less smoothly. Two miles into the return leg I was faced with a closed road. As usual I ignored the sign and cycled on, hoping I could squeeze past whatever the obstruction was. But this time the road was totally blocked off with machinery and a flooded surface. Reluctantly I turned around and back-tracked. I zoomed out on the Garmin to get a better overall idea of where that road went; I aimed roughly in a direction that would hopefully lead back onto my intended route somewhere beyond the closed road. Eventually I came to a left turn that seemed to go the right way. Luckily, two miles later, I ended up just the other side of the roadblock (see the loop at the top of the map above).

The route back was hillier so my average dropped. Also, the cold greyness of the day was beginning to get to me. It seemed to be sucking all the endorphins from my body! Just before I got to Egerton I thought I heard a hiss from the back of my bike – a hundred yards later I realised I had a puncture. I found a suitable verge and proceeded to fix it. I discovered the cause straight away – there was a thorn stuck straight through the tyre. It took me several minutes just to get the thorn out. I put a new tube in the tyre and pumped it up. As I unscrewed the pump, the valve came out with it, letting all the air out again. Damn! This had happened before; I must have bought a batch of tubes where the valves hadn’t been screwed in fully. I didn’t really have the right tool to do it so I used a slot in my multi-tool to tighten the valve insert. I pumped it up again, which involved considerable effort from the small pocket pump I had, only to have the same thing happen again! I was getting a bit wound up with it now. This time I thoroughly investigated all the features of my multi-tool in case there was valve-tightening tool! I found that if I sort of twisted one of the slots over at an angle I could grip the valve stem and tighten it up. I pumped it up again. Then I noticed that air was bubbling out of the tyre at a particular point. I listened closely and there was a hissing of air escaping. The air was obviously coming from an existing hole in the tyre. After pondering the cause of this, I concluded that this must be air trapped between the tyre and tube escaping through the hole in the tyre. This assumption turned out to be correct because the tyre remained fully inflated for the whole ride home. Strange – I have never seen that before. Once I had inflated the tyre I had trouble refitting the wheel and had to try about three times. Again, that had never happened before. In the end I had spent 28 minutes fixing the puncture. Normally I have it done in 8 or 9 minutes.

I was now running later than expected. That, added to the general gloominess of the day meant that it was getting a bit darker than I had hoped – I only had a rear light. After fixing my puncture I never really warmed up again. My hands did eventually warm up but my feet were cold right to the end. My average speed for the remaining 18 miles was 16.1mph, which is not too bad. As with so many rides lately I wanted it to be over long before the end.

Make sure spare inner tube valve is tight
There is nothing more frustrating than pumping your tyre up with a mini pump in the freezing cold, only to have all the air rush out again when you remove the pump.
Keep wearing knee warmers
My knees have been OK on the last few rides wearing knee warmers. Today, especially after a cold fast descent, my right knee started to hurt very slightly, so I don’t think it likes the cold.
Take front light if ETA is near dusk
I knew that I should be home before it got dark so I didn’t take a front torch. But the delay caused by the puncture added to the dullness of the day resulted in dim conditions where I would have felt happier with a front light – for the purpose of being seen as opposed to seeing where I was going – it wasn’t that dark.